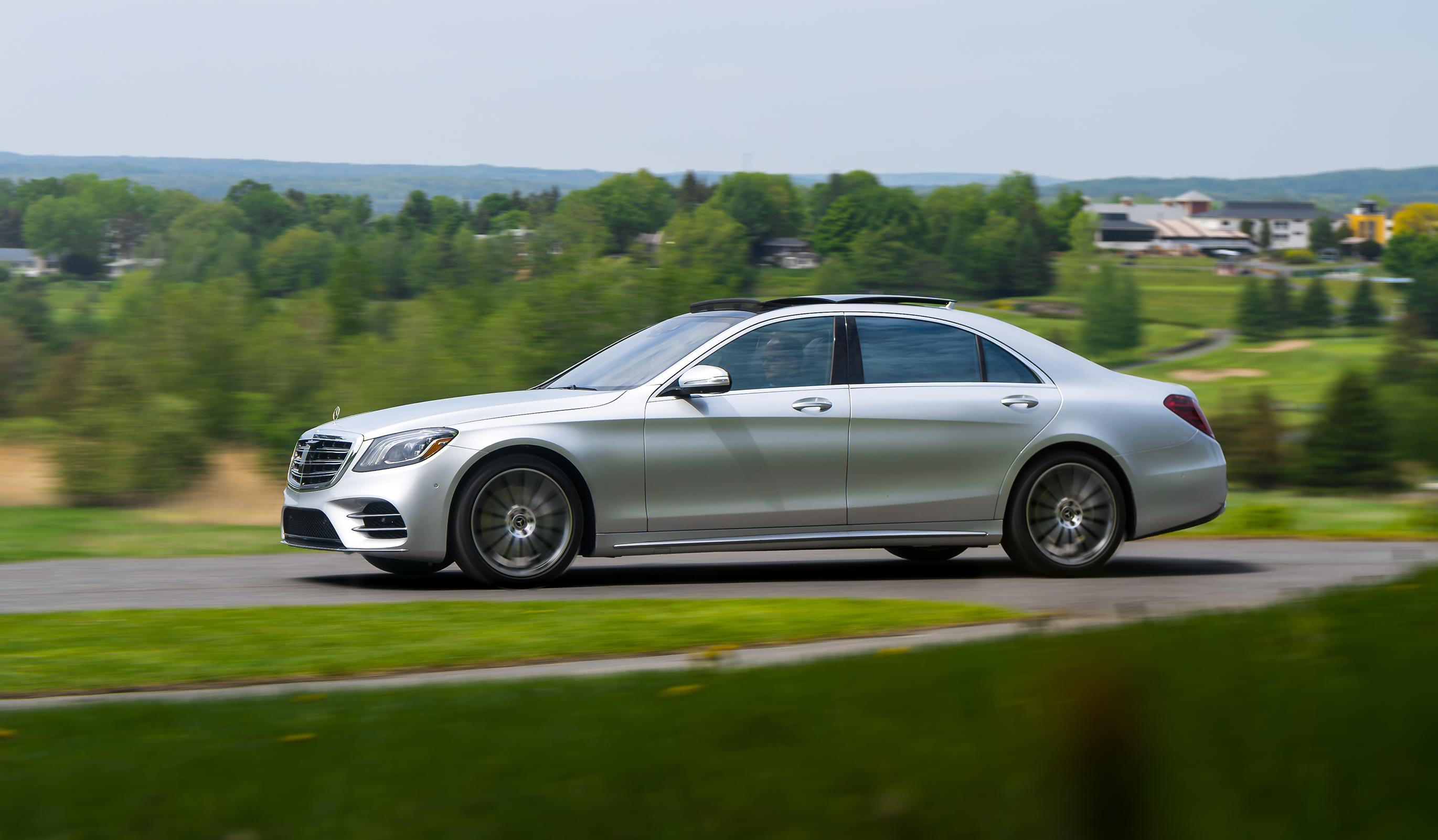 The Mercedes-Benz S Class has long held the status of the pinnacle of automotive excellence, the reference, if you will, for full-size luxury sedans. These cars are still often purchased by superstars or very busy business people who prefer being driven. But the sad truth is, ever since the Germans took hold of the great British luxury brands – Bentley and Rolls Royce – the big Benz is now eclipsed by those cars in terms of flamboyance, prestige and all-out bling, important elements for the targeted buyer who has enormous amounts of money to spend on a vehicular living room.

It doesn’t, however, prevent the S Class from soldiering on as a stellar machine. People are still buying a hell of a lot of them. That’s because Mercedes-Benz’ ace up its sleeves with its flagship has always been the fanatical build quality and sophistication injected into it. And for 2018, that’s exactly how the diamond star sets itself apart. By offering an S Class that’s never been so smart, so capable, and so diversified.

How Deep Are Your Pockets? 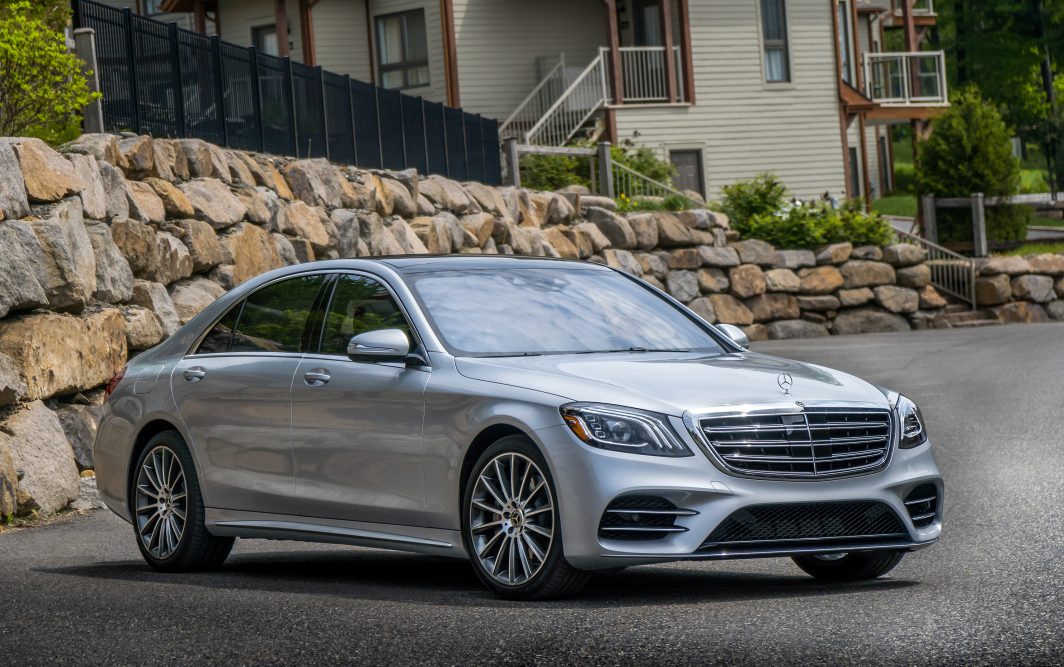 What I personally admire about this car, is how many flavors of it are available. Believe it or not, the model you see here sits at the bottom of the lineup with its “meager” $117,000 price tag. Climb up the ladder, add a longer wheelbase – hell, AMG the damn thing –  or head over to Maybach to transform your German sedan into a full-on luxury yacht, complete with a fridge and wine bottles squeezed between the rear seats, and you’ll set yourself well over $250,000.

And don’t get me started on the coupe, or even the more opulent, convertible S Class with its 621-horsepower, handcrafted, 6.5-litre V12. That one goes for a poor-obliterating $280,000. That’s before adding the $13,750 high-performance ceramic composite brake option. No biggy. 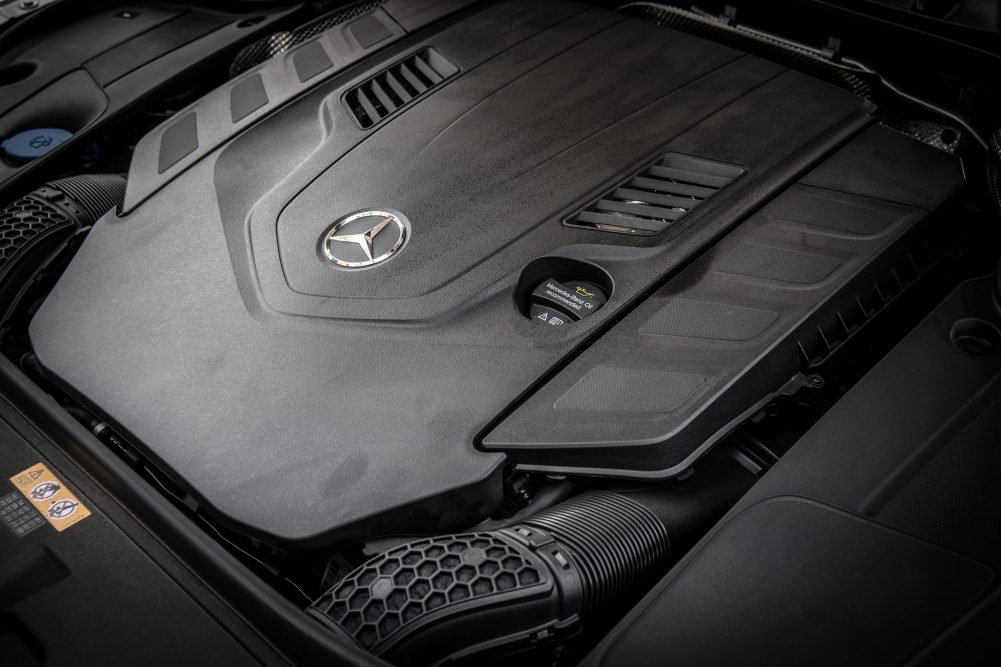 Let’s focus on the one you see here, the S560, with the standard wheelbase. It’s the, shall we say, “bread and butter” version of an already unattainable vehicle. While its rear seat isn’t as lazy-boy-ish as the long wheelbase cars, it’s still a fantastic place to stretch your legs in. But the S-Class is also a formidable machine to drive, thanks in part to the brand’s ubiquitous 4,0-litre twin turbo V8 that also powers the AMG GT, and the Aston Martin Vantage. It’s rated here at 463 horsepower and 516 lb-ft of torque. That’s an increase in 13 horsepower over the previous 4.7-litre V8. It’s even quite frugal if you allow it to be. I managed a 9.4L/100 km average while I had it, which is amazing considering the amount of power and torque the engine has on tap. 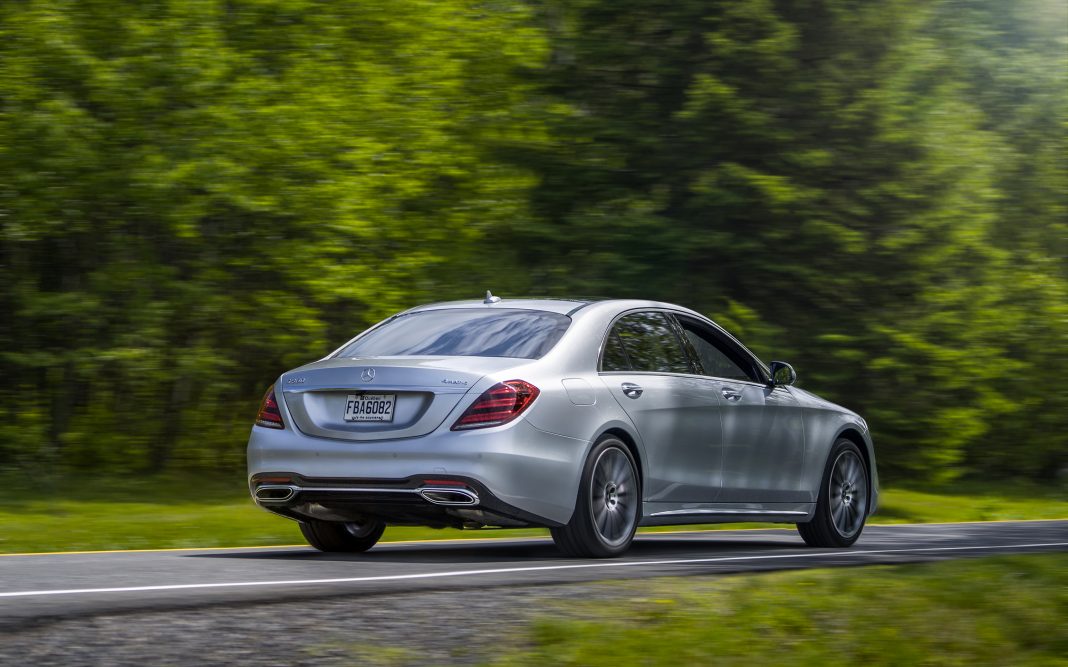 All S560’s sold in Canada come standard with 4MATIC all-wheel drive. The sole gearbox option is a nine-speed automatic. Mercedes-Benz claims a 0-100 km/h time of 4.5 seconds. That’s not bad considering we’re talking about a near 5,000-pound monolith on wheels. Actually, it’s rather quick.

Be The Driver And Passenger All At Once 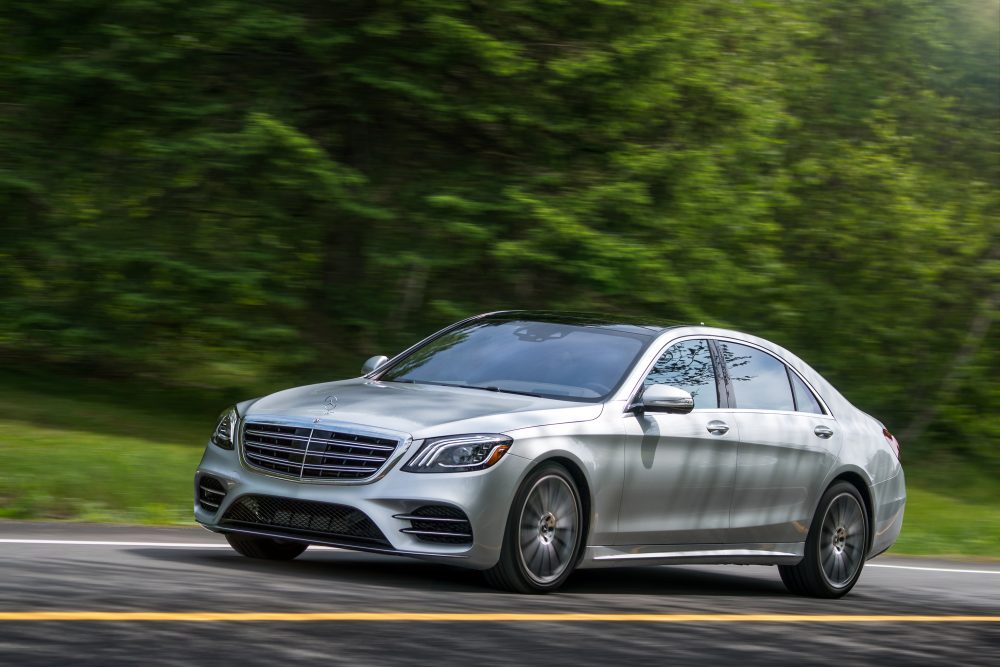 It also feels fast behind the wheel. Smash the accelerator pedal in Sport+ mode, and the big Merc quickly downshifts and hauls forward in a smooth, nonchalant manner, rapidly gaining speed, effortlessly, kind of like a high-speed train that emits a Messerschmitt-style exhaust note as it plows down the countryside. Composure and finesse is key here. What you have here is a machine that was designed to evoke the least possible levels of stress within the impeccably quiet cabin. And it delivers. 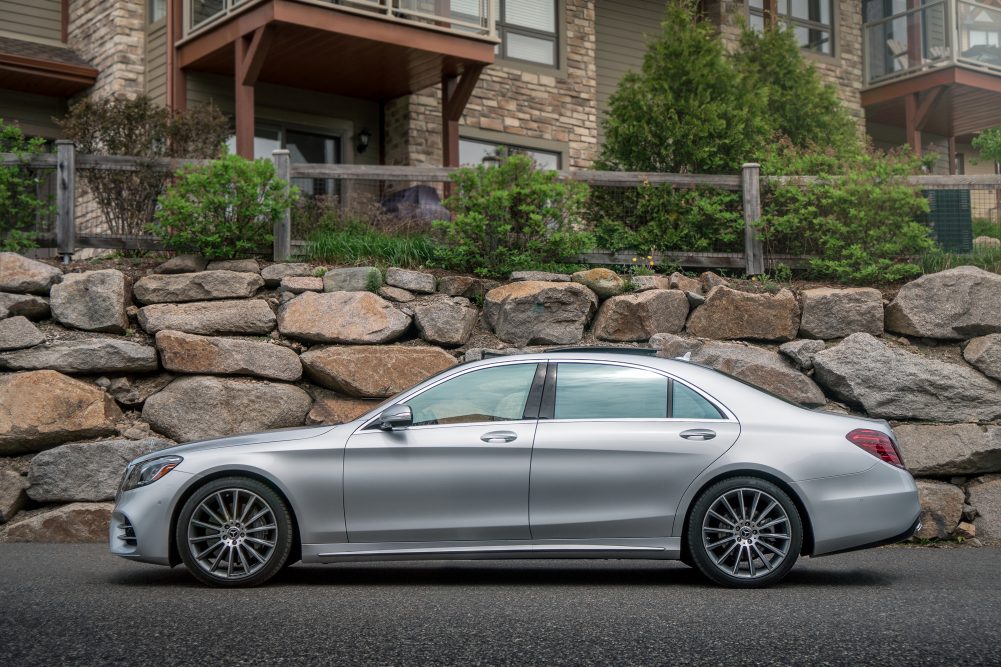 But it’s not like the car is clumsy in the bends, it isn’t. The S560 will embrace the next corner with grace, beautifully planted to the ground, compliant and surprisingly agile. The steering is creamy smooth, yet precise when required. And when the time comes to scrub off some speed, the massive brakes won’t hesitate to bring this opulent heft of steel and veneers to a halt. There’s even an automated emergency braking system that avoids a collision at high speeds. Should you attempt to avoid the upcoming obstacle, the car’s steering will assist your maneuver to make sure it’s all performed smoothly, and drama-free. Because of course it will. 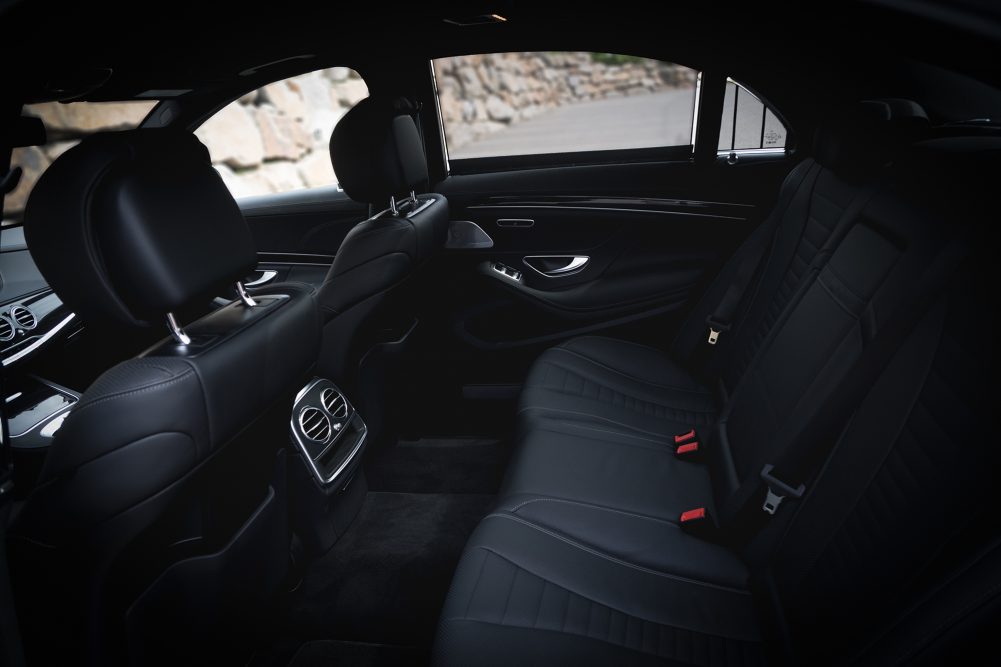 This remains a big and heavy sedan, so the S-Class may be plenty capable, don’t expect it to set lap records. That was never it’s reason to be. Tired of flinging your passenger through the canyons? No worries. Set the S560 to Comfort mode, adjust your heated/ventilated/massaging seat to your liking, let the brushed aluminium air vents blow filtered rich-person cool air down your neck, and activate the full suite of semi-autonomous features, which will drive the car back to the city as you bathe in exquisite German craftsmanship, and fresh cow hides. 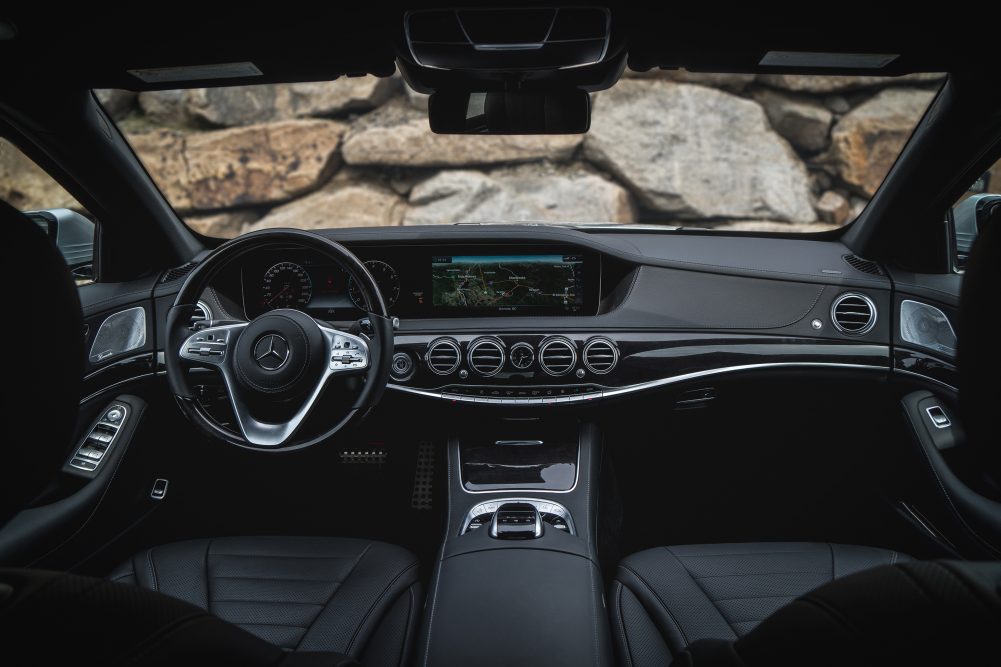 Mercedes-Benz claims that the adaptive cruise control in the S-Class is its most advanced to date, using both GPS data and sensors on the car to determine its location, all-while anticipating what’s coming next. And it is an impressive system. It adjusts its speed for curves, intersections, changes in speed limits, and toll plazas. And it performs admirably well on secondary roads. It’ll even apply the brakes for you at an intersection when there’s oncoming traffic. That one takes some time to get used to, and trust. 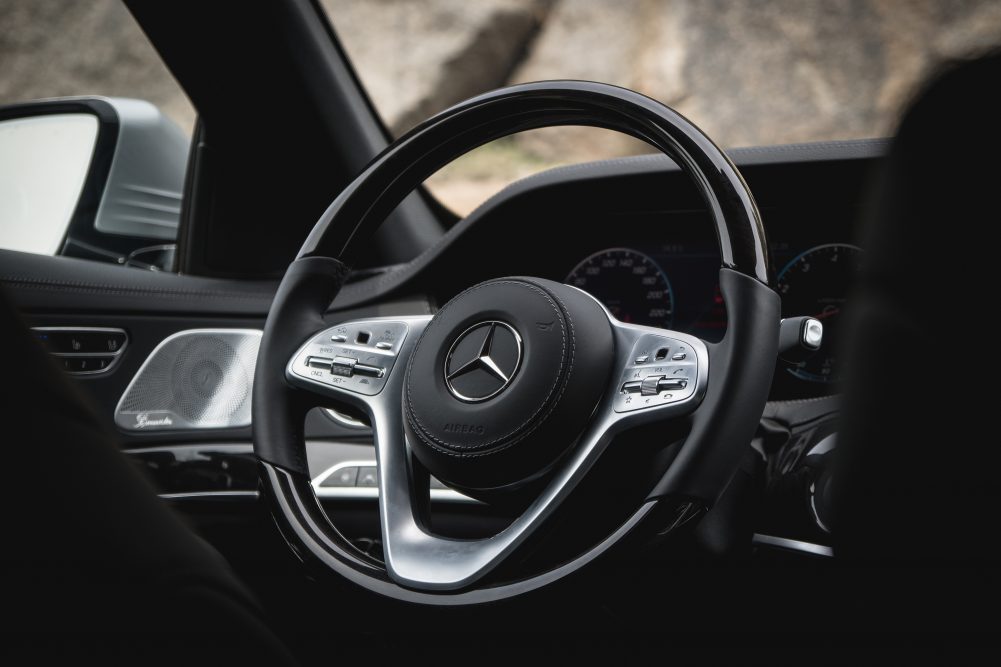 Another big thing this year is the car’s ability to change lanes without human control. Simply activate the turn signal, and the machine does it all for you. If it detects a car coming up, it’ll wait, slow down, eventually merge over, and follow the car in front at a safe distance. Impressive, but more importantly, consistent.

I’m sure you’re thinking “yeah, so what? Tesla does this too”. Yes, it does. But Tesla’s autopilot system is camera and sensor-based only, whereas Mercedes-Benz adds GPS-sourced inputs to improve the system’s reliability. I’ve tried Tesla’s autopilot feature, the most recent version in the 2018 Model 3 Performance, a car you’ll see here soon. And it changed lanes when the car deemed appropriate. Sometimes, it refused to do so. The S560, on the other hand, did it all the time. 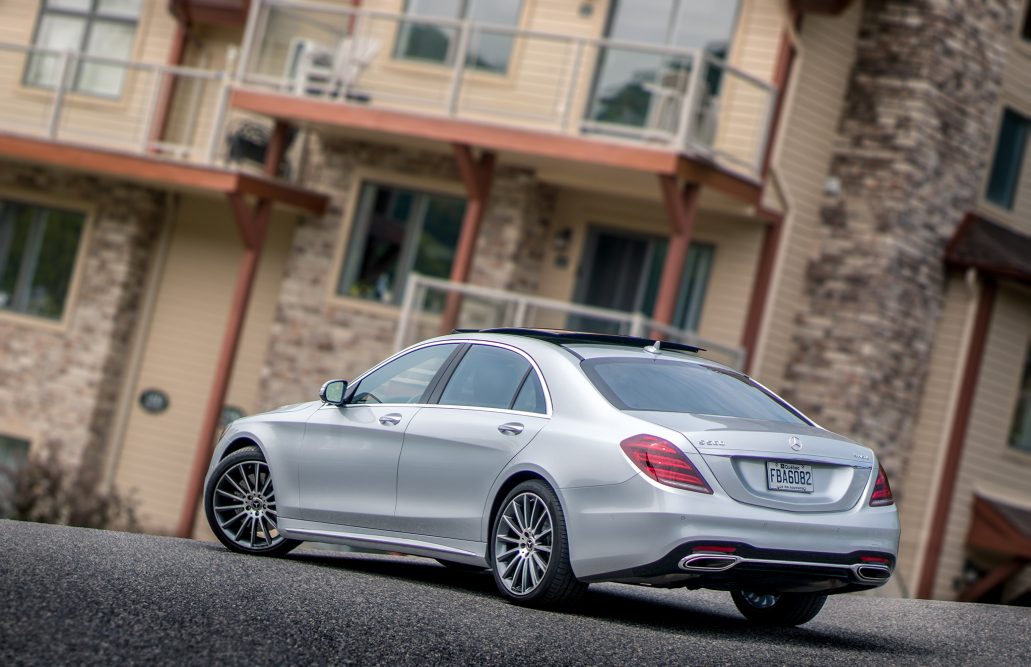 For many, the 2018 Mercedes-Benz S560 is a little bland, not flamboyant enough if you desire to flaunt your excessive wealth. I agree, the car could use a little more pizaz. But not everyone wants to get noticed. I personally adore this car’s simple, elegant, yet timeless design. And while the interior may be a little too conservative and spartan for the segment, especially when it’s all black, there’s a sense of purpose to it that will remain fresh 20 years down the road. Sure, there are hints of flimsy piano black plastics that don’t deserve to be in a car that sells for over 100 grand. But there’s enough technological know-how and all-around quality in this machine to justify its value. 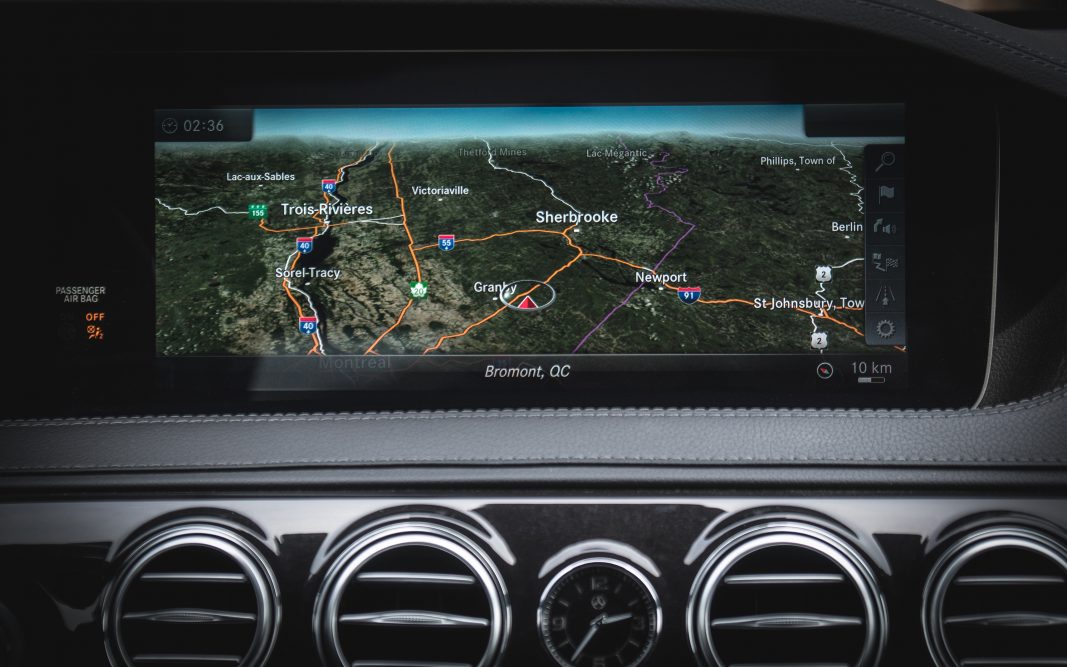 The entire dashboard is essentially a large screen. It’a actually comprised of two 12.3-inch LCD’s, which double as the gauge cluster and the car’s COMMAND infotainment system. Everything can be tailored to you liking, of course, from interior lighting, to what is displayed on which screen, which looks fantastic thanks to its high-definition resolution, attractive menus and rich colors. 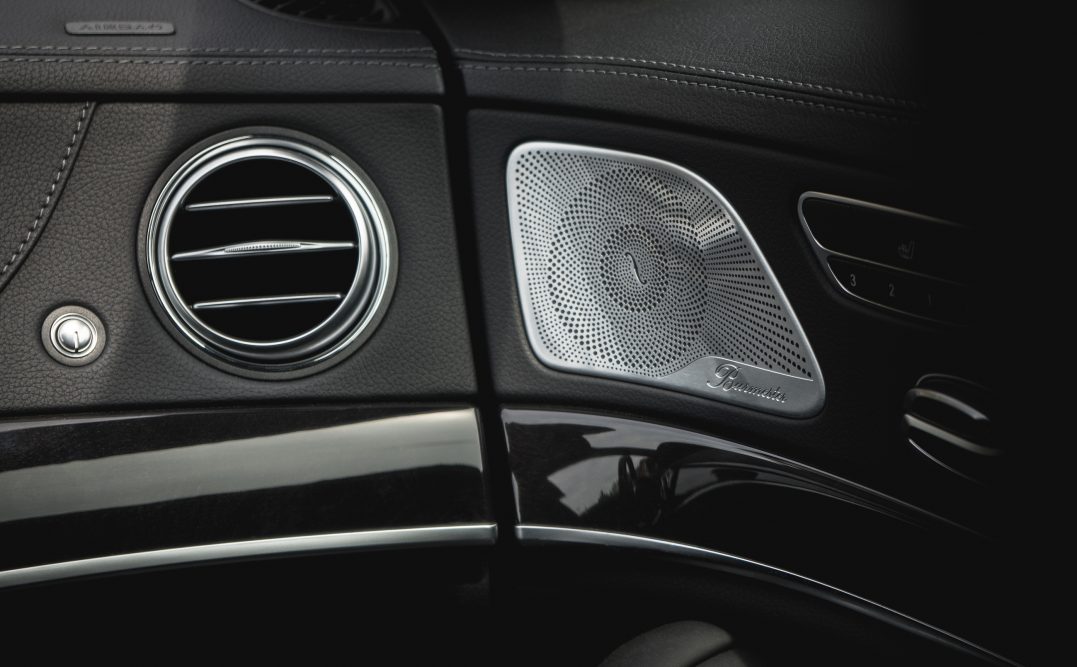 But it isn’t a simple system to operate, or understand. The knob dial / touchpad put there to control it is unintuitive. Performing two things at once, like changing radio stations while checking the navigation system is nearly impossible, and the levels of features the car is fitted with add a layer of complexity that might distract some drivers more than aid them during their drive. 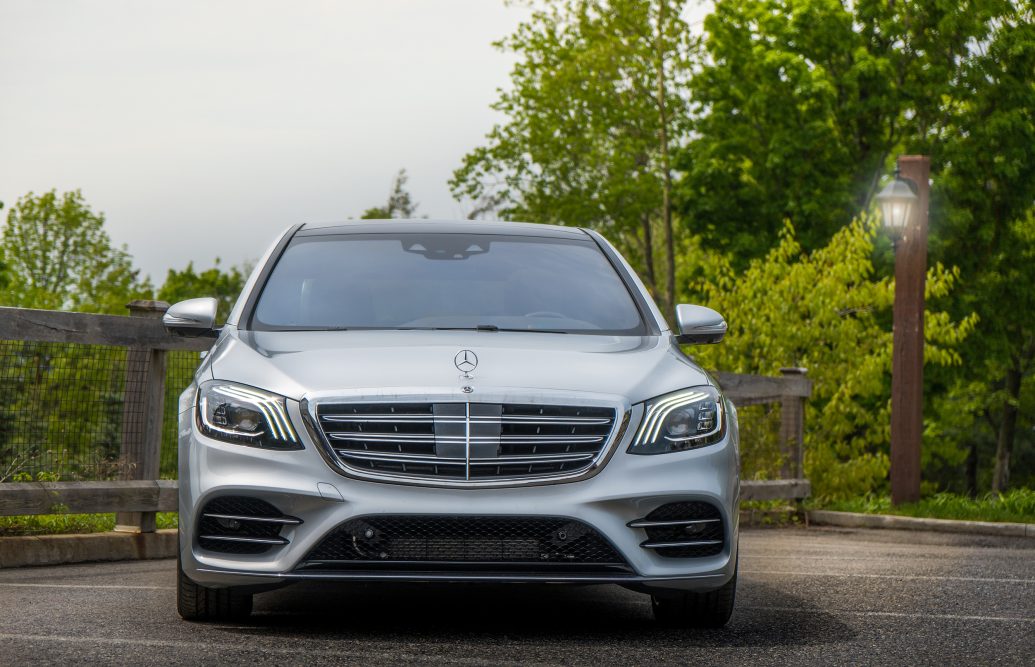 Predictably, several of this car’s toys will one day break and cost a shit-load to fix, significantly dropping this Mercedes’ resale value within the first five-years of ownership. But the dirty truth is that the targeted buyer couldn’t care less. What they want is a place where they’ll be isolated from the heavy stress of their painstakingly demanding lives. The 2018 Mercedes-Benz S560 is for people whose careers have overwhelmed them to a point that they can’t appreciate their wealth. It’s here to remind you that you are indeed in another league now, and that you deserve a break for a change.