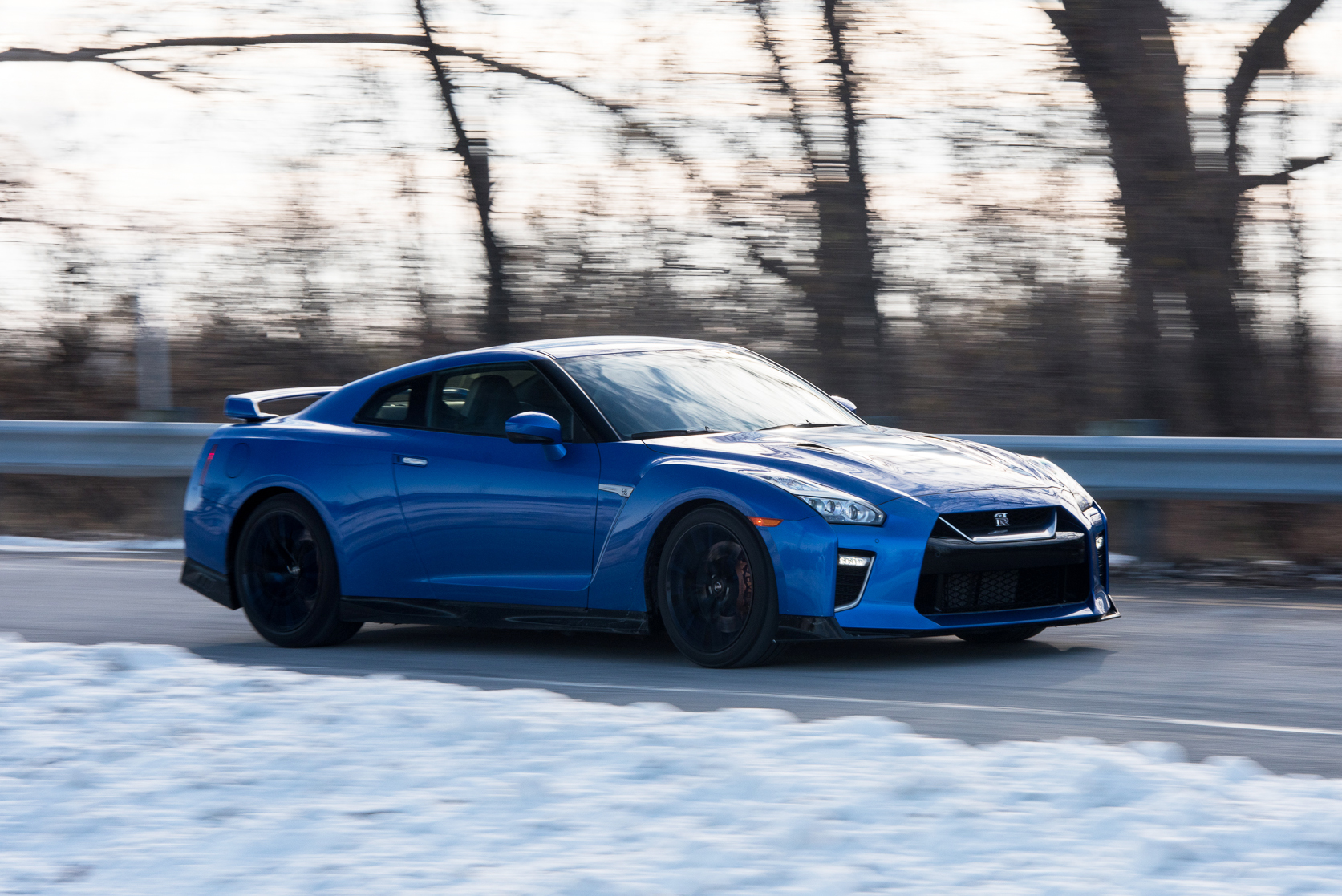 You’d think that after four years into this business, after driving cars like the McLaren 600LT or the Acura NSX, I’d have driven a Nissan GT-R by now. Yet, no. Through all these years, I either didn’t have the opportunity to drive one or simply didn’t really think about the car.

The thing is, although I have tremendous respect for the GT-R, it’s just no longer on my radar. More sophisticated, just as fast, and more affordable vehicles are now available. Still, when the opportunity comes at you to drive Godzilla for the first time, refusal is simply not permitted. 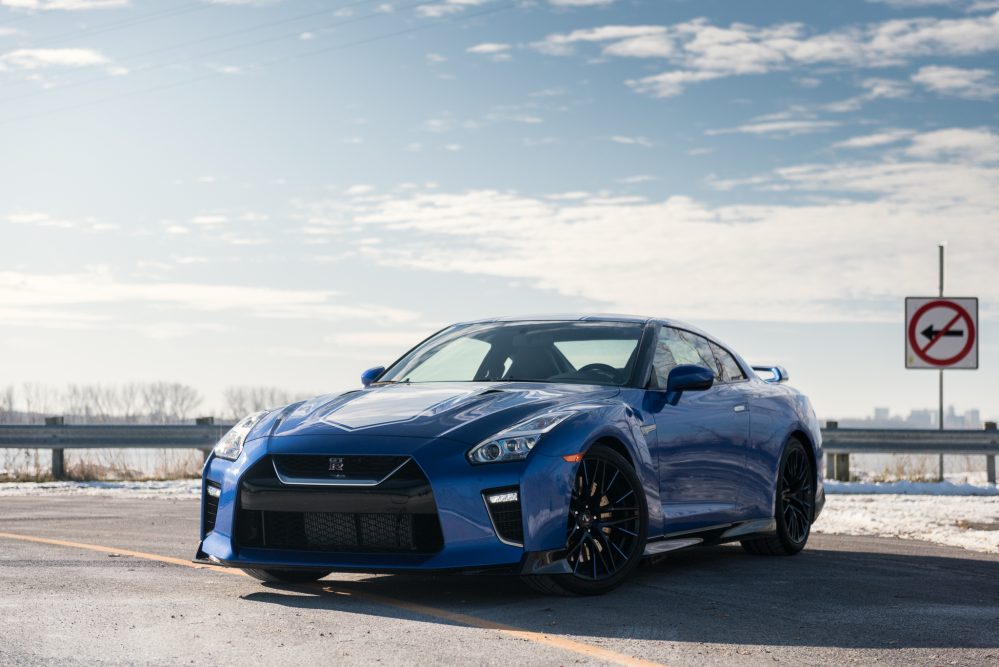 If you’re wondering why my tester is wearing a ghastly racing stripe, that’s because it’s part of the 50th Anniversary package, which is exclusive to the 2020 model year Nissan GT-R. 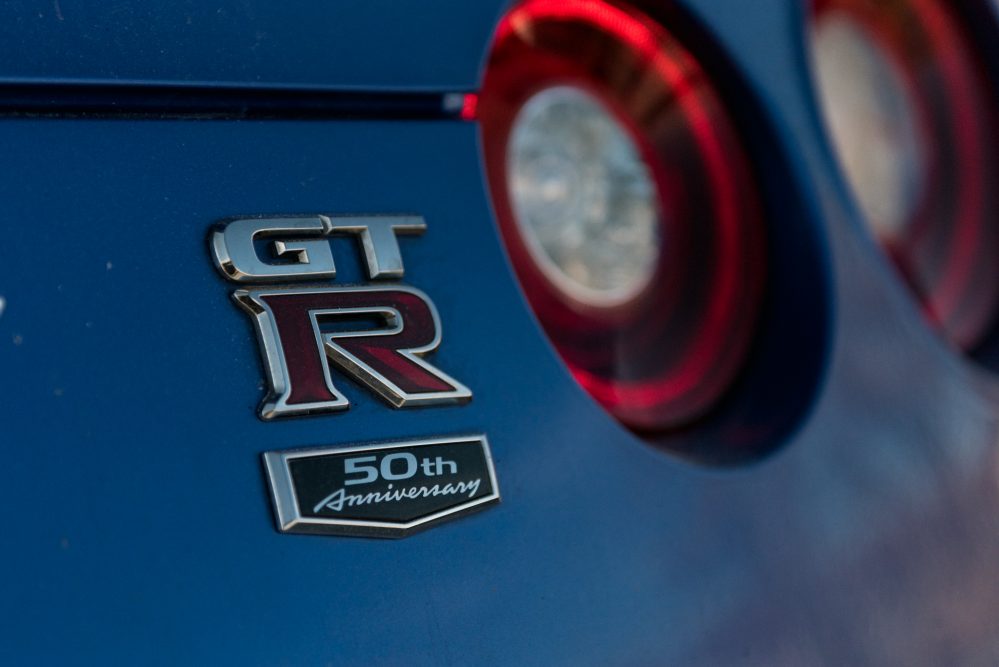 It pays homage to, yes, the fact that the Nissan Skyline has been part of Japanese performance for fifty years, but also to Nissan’s racing heritage, notably the Nissan 2000GT-R that won the JAF Grand-Prix back in 1969 wearing the same  kind  of  stripe. 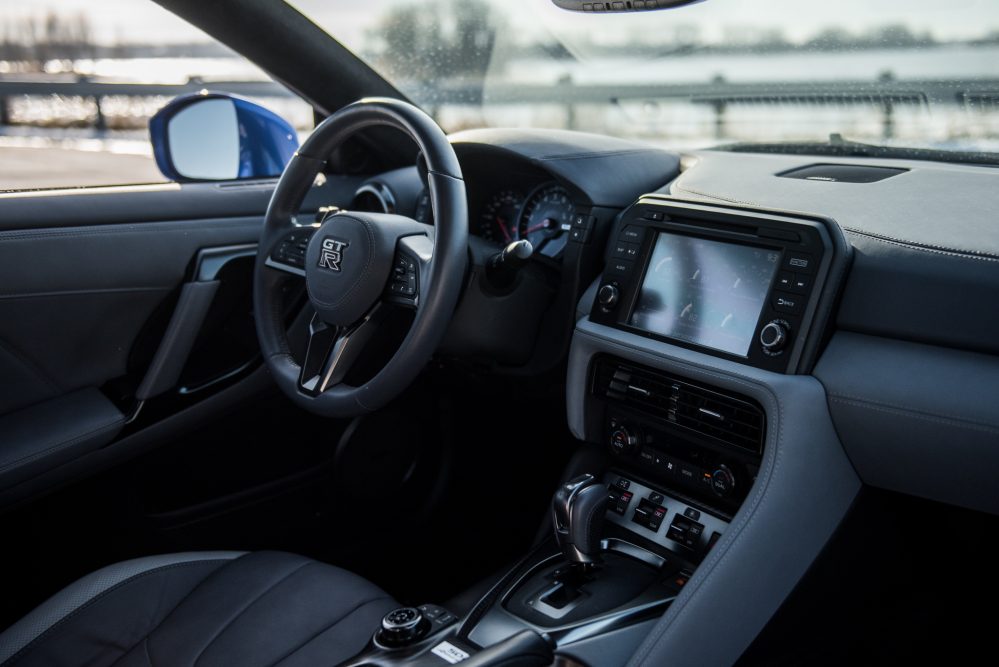 The package is a $9,000 option grafted onto the GT-R’s $132,613 base price. It also includes model-specific wheels, a rather attractive bluish grey interior, unique 50th Anniversary badging here and there, and a very gimmicky “50th Anniversary” white sticker slapped onto its rear fascia. 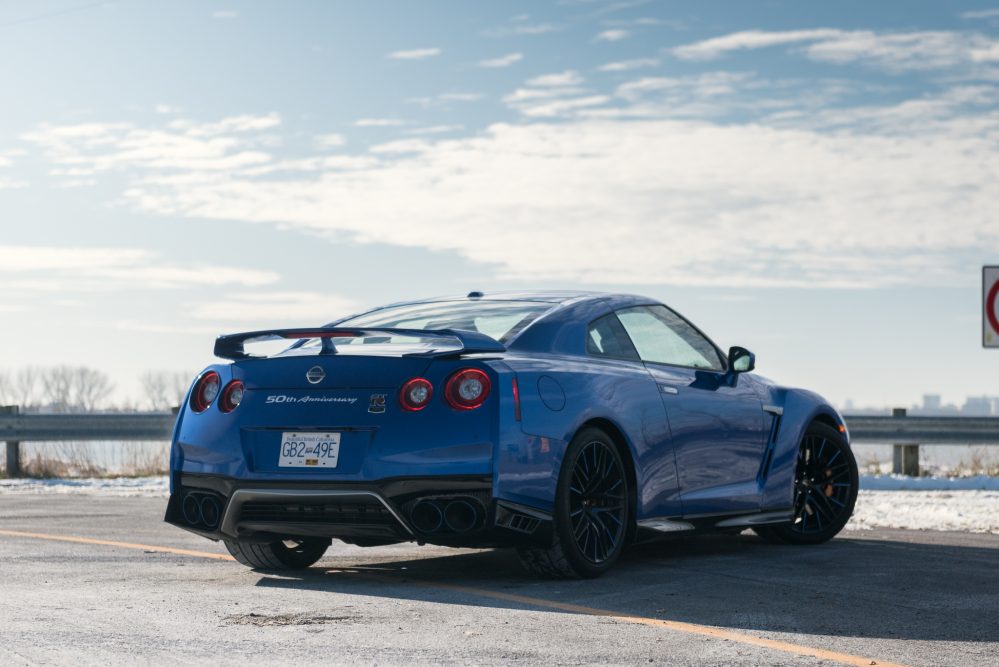 Only three colors are available for this edition Nissan GT-R: Pearl White Tricoat (with a red stripe), Super Silver Quadcoat, and Bayside Blue – as my tester -, which hearkens back to the R34 Nissan Skyline GT-R, arguably the most iconic model of the entire lineage. 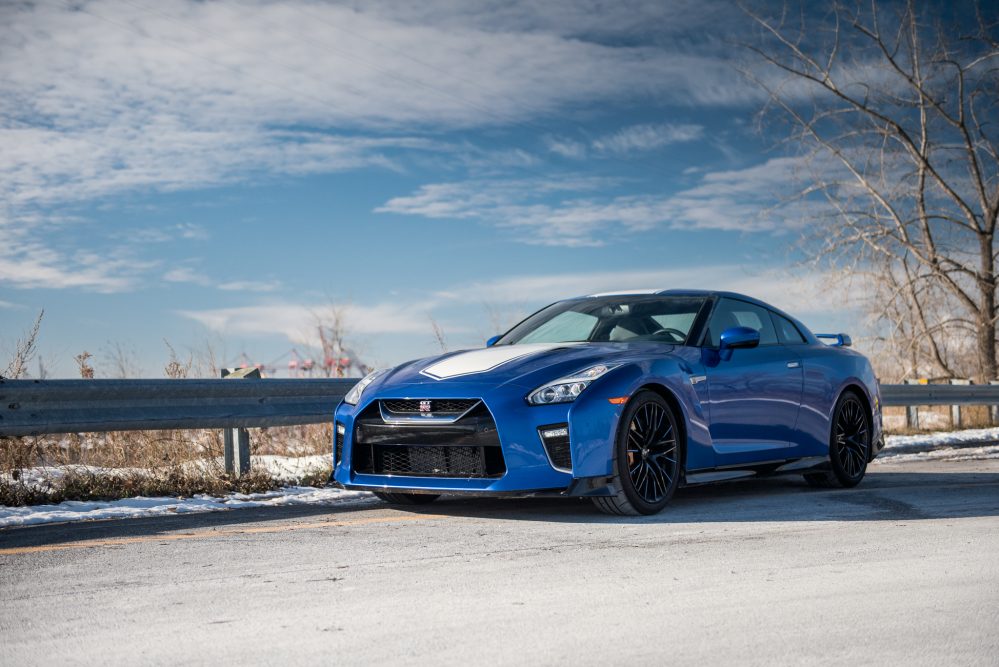 If you want my honest opinion, I’d say skip this Anniversary package unless you’re really looking for a collectible. Mechanically, it’s essentially the same car, powered by the same 3.8-liter twin-turbo V6. Power was incrementally increased in 2017 to 565 horsepower and 467 lb-ft of torque. 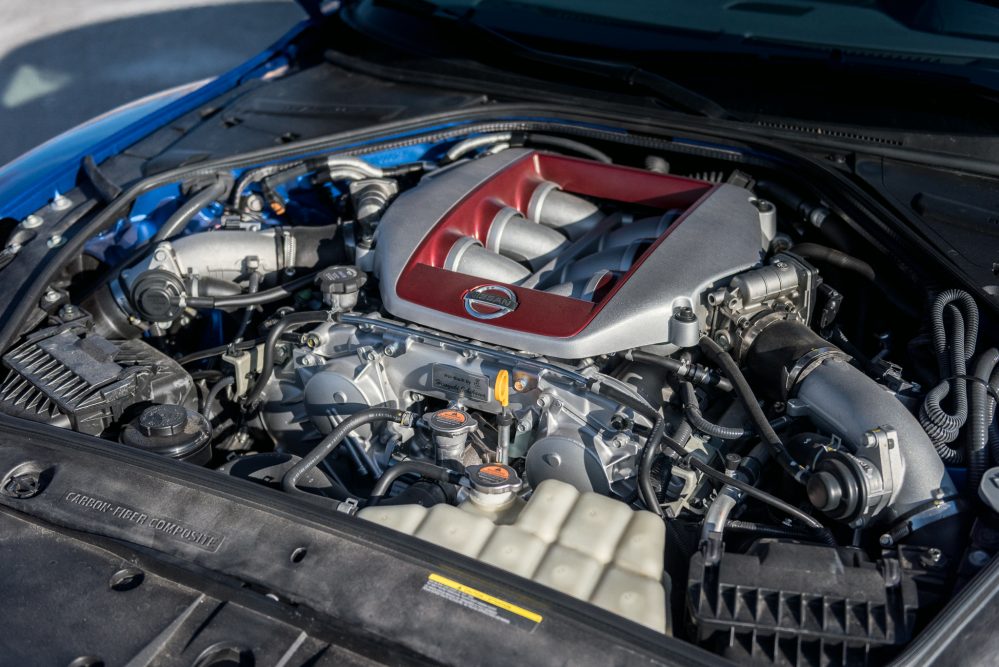 A six-speed dual-clutch automatic gearbox is still the only way to go, and as is the tradition with the GT-R, it comes standard with a rather clever all-wheel-drive system. It’s Nissan’s renowned ATTESA E-TS technology which prioritizes rear-wheel-drive until it sends up to 50% of the available torque to the front wheels. Torque vectoring is also part of the equation. 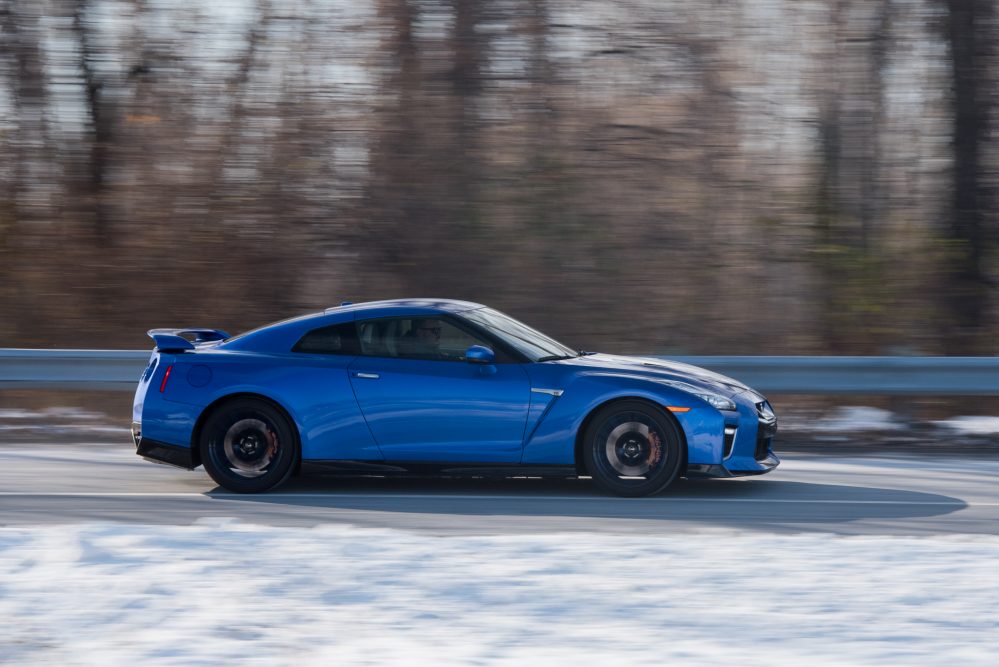 How can I possibly come up with something original to say about the Nissan GT-R? I mean, everything has been said about the car already, and you’ve all watched the Youtube videos of the thing humiliating supercars. I will say that after driving several modern sports cars before it, the GT-R feels old and ironically, very organic,  which  I  did  not  expect. 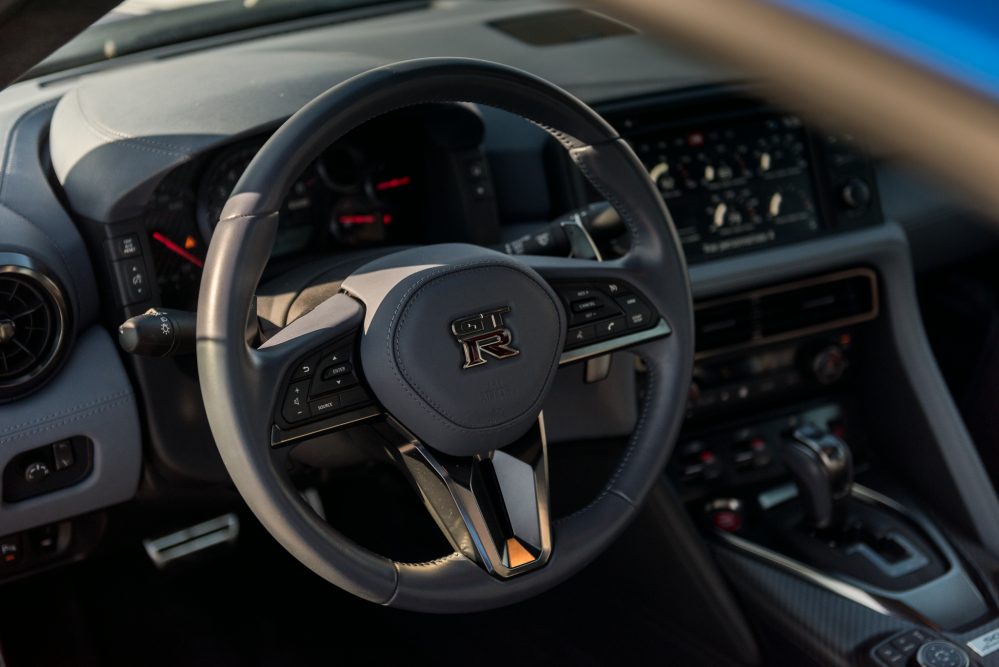 This is odd, because when the car first arrived back in 2009, the biggest complaint people had with the thing was how robotic and soulless it was. But that’s false. If anything. Godzilla is one of the most temperamental performance machines I’ve  ever  driven. 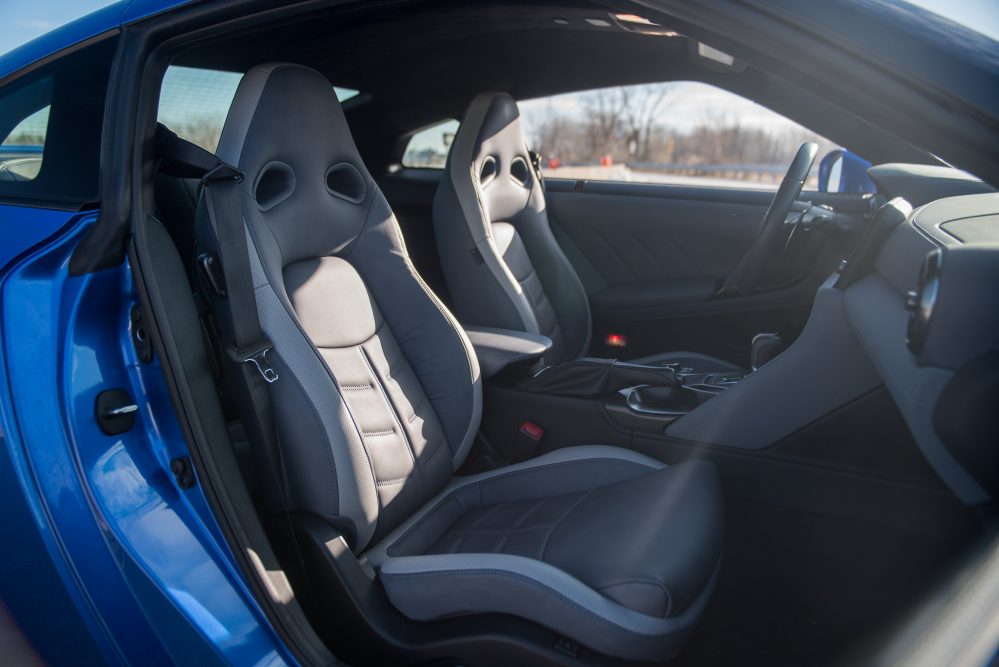 I will say though that its interior now feels like something from an entirely different generation, with its large analog gauges and unbelievably useless infotainment system. The GT-R is a rather large car, but its cabin is very snug. I don’t get why they even bothered to fit rear seats in the thing. 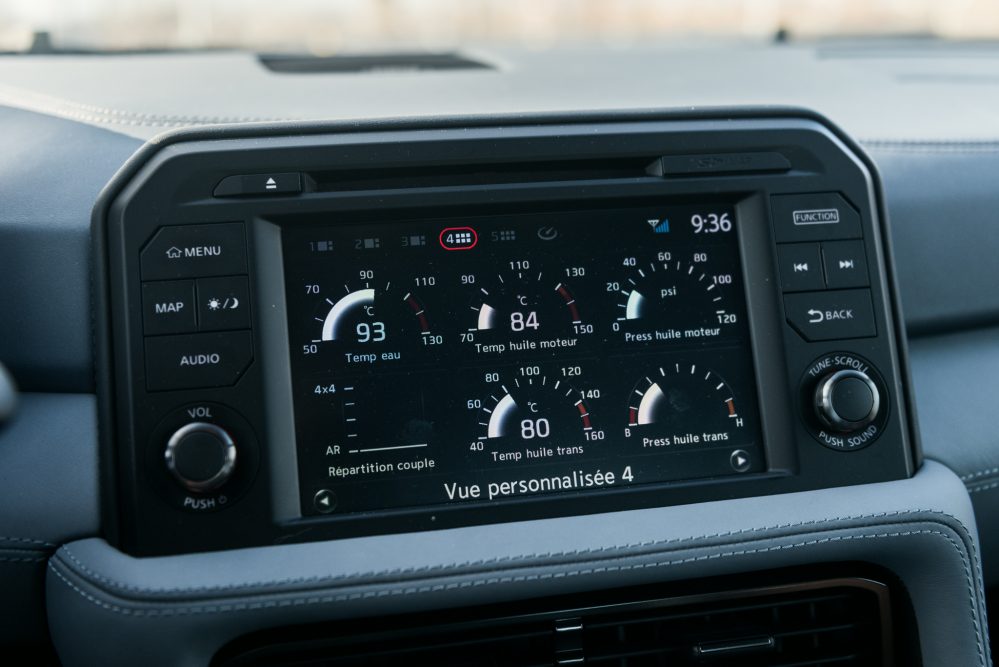 My time with the car wasn’t all fun and games, as the province of Quebec was hit with an early November snow storm the week I had it. My fast Nissan wasn’t fitted with winter tires, but a rather very racy set of Dunlop SP Sport MAXX GT600 performance rubber; 255/40/ZRF20 in the front and 285/35ZRF20 out the rear. You can imagine how scared I was driving this thing on frozen cold tarmac covered with patches of snow and ice. 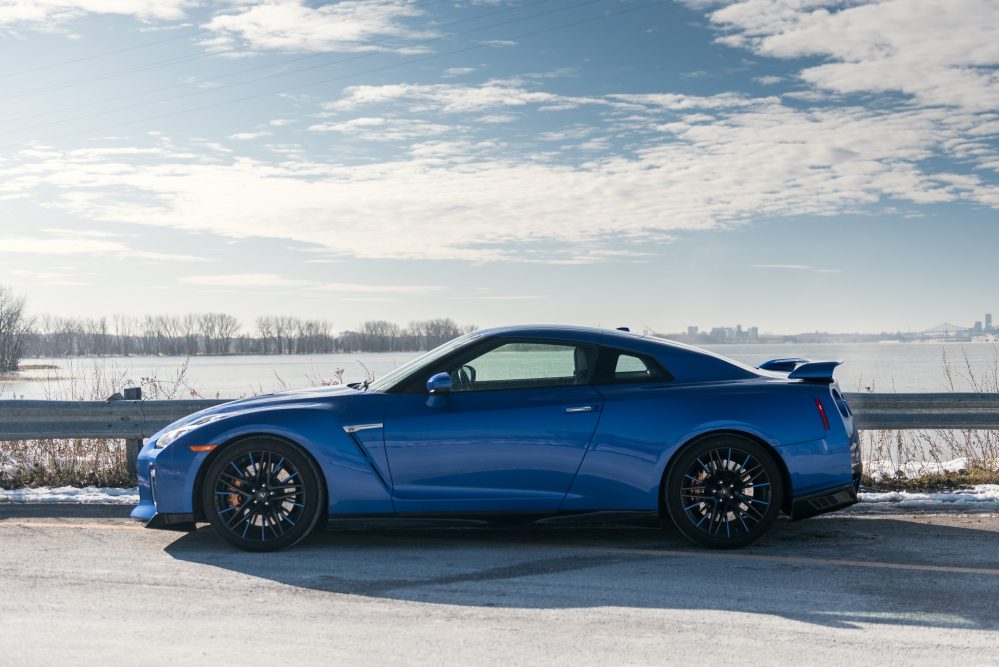 Then there’s the way those tires affect the GT-R’s composure in casual driving. Every bump and crack on the road is felt, to the point where the entire car squirms from left to right. Suspension is rock hard, even in “Comfort” mode, and the dual-clutch automatic gearbox is rather crude. 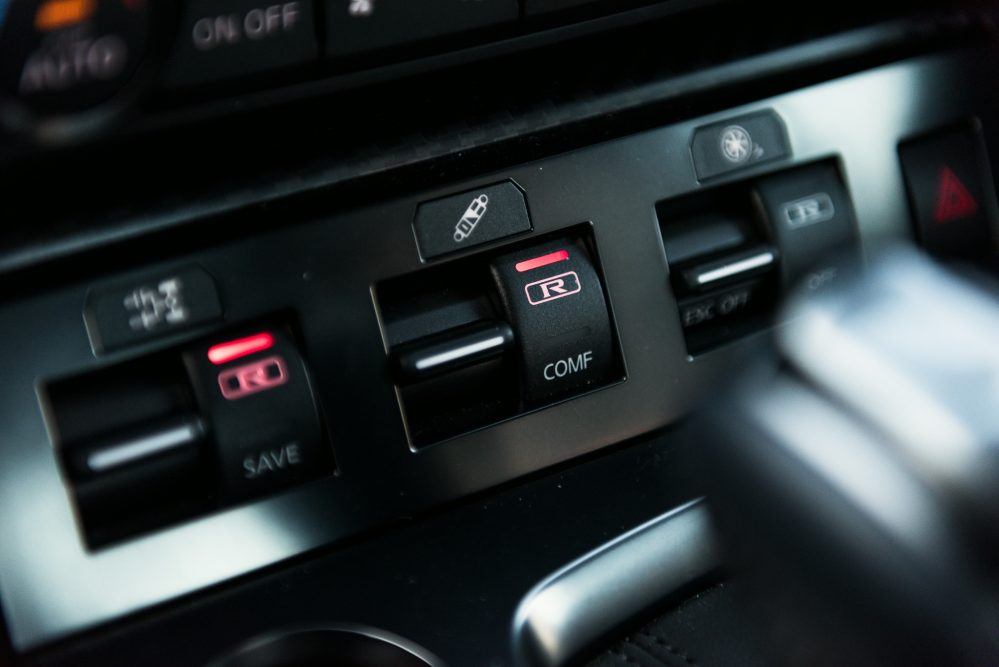 It’s a first-generation setup, one which requires you to apply a fair bit of throttle for it to get up and go. It also clunks worryingly when shoving in gears at low speeds. Oh, and the car is a total gas hog, I could barely keep it under 14L/100 km. 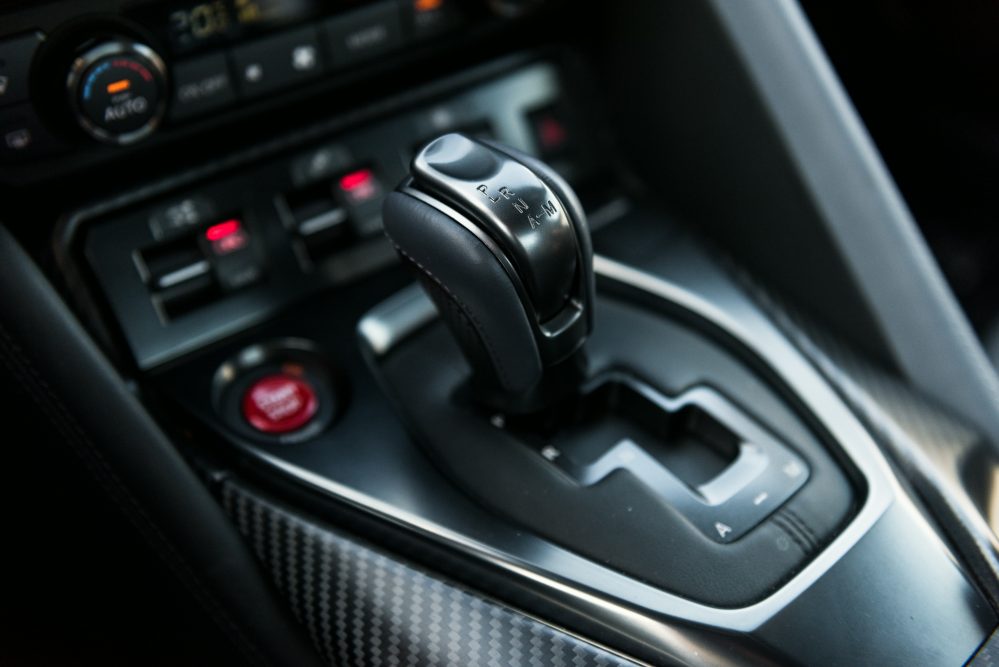 At this point, you’re probably wondering why I’m talking about how the Nissan GT-R drives around town, and why I’m not writing about how face-ripping fast it is. Obviously, you don’t buy a car like this to do the school run. You want to bring your GT-R out on a track, or escape out in the country side for some good old canyon carving. You  could  also  choose  to  hunt  down  Lamborghinis  and  Corvettes at  night and  show  them  who’s  boss. 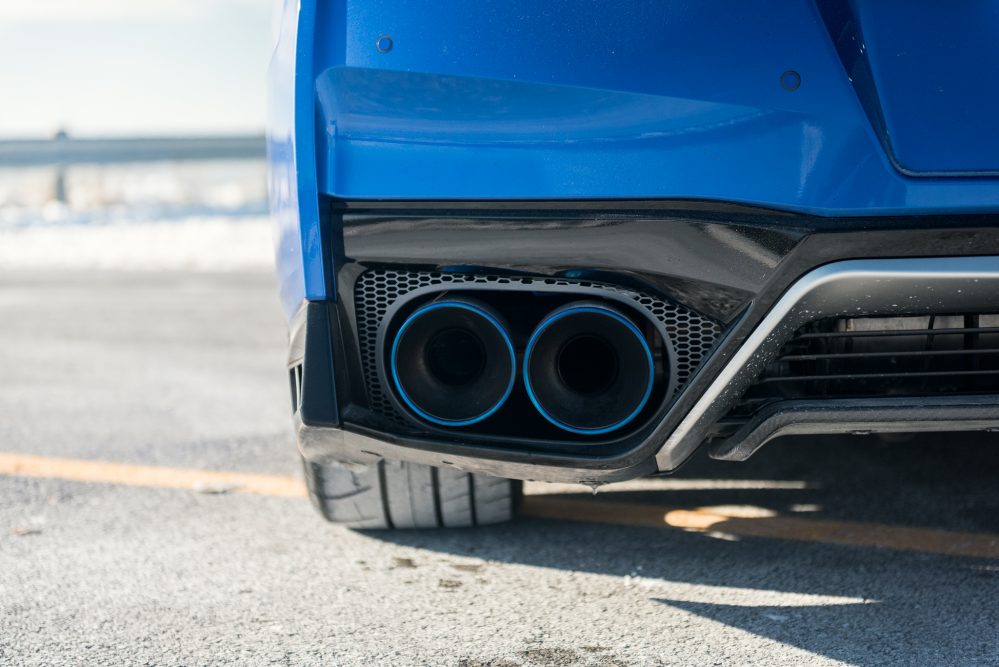 Yes, the Nissan GT-R is fucking fast. When set to its most aggressive R setting, its suspension becomes even more back-braking, its steering transforms into a piece of granite and its transmission shuffles cogs in a decidedly more aggressive manner. 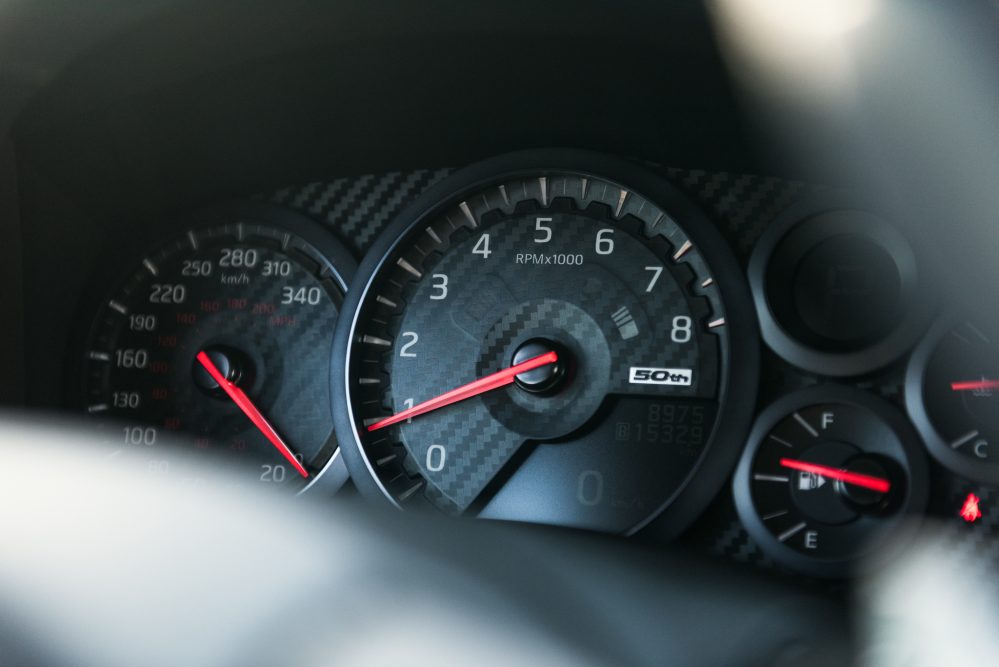 Stomp the thick throttle pedal and the twin-turbos spool their 14.4 psi of boost through the cabin, in a very audible whirling sound. Turbo lag is tremendously present, but once the engine does its thing, power delivery is brutal, accelerations are visceral; jolting out of the hole to 100 km/h in just under three seconds. The only thing left for you to do at this point is hang onto the thick steering wheel and hope not to die. 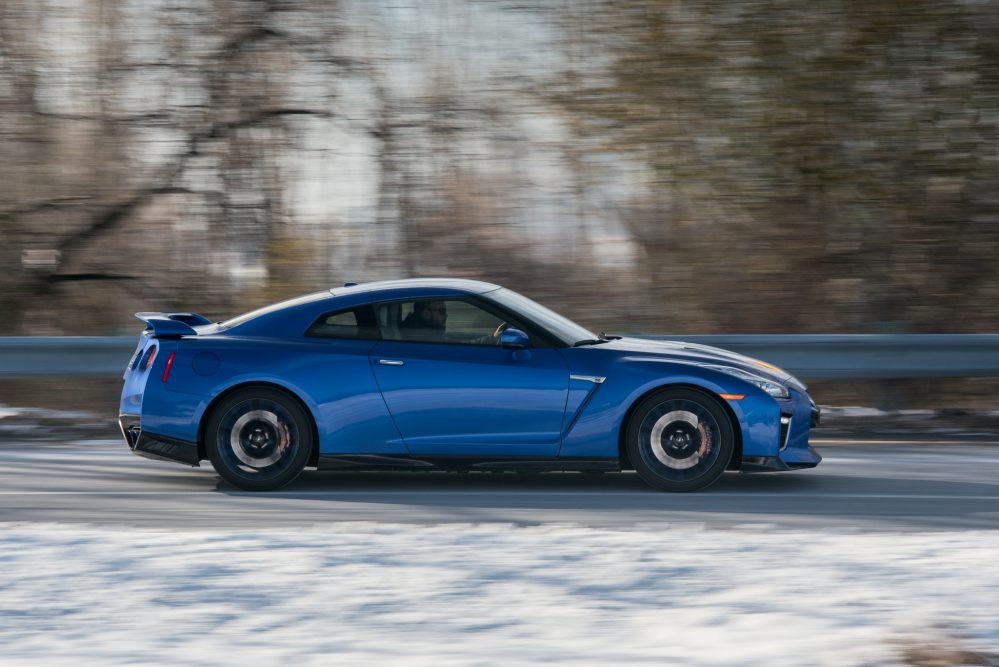 There’s also an enjoyable soundtrack that channels its way through the engine compartment. Applying throttle upon corner exit will make this beast kick out its rear, and don’t you dare press that brake pedal too hard as it’ll rip your face off and splatter it all over the windshield if you do.  Godzilla  has  a temper,  folks.  So  don’t  fuck  with  it. 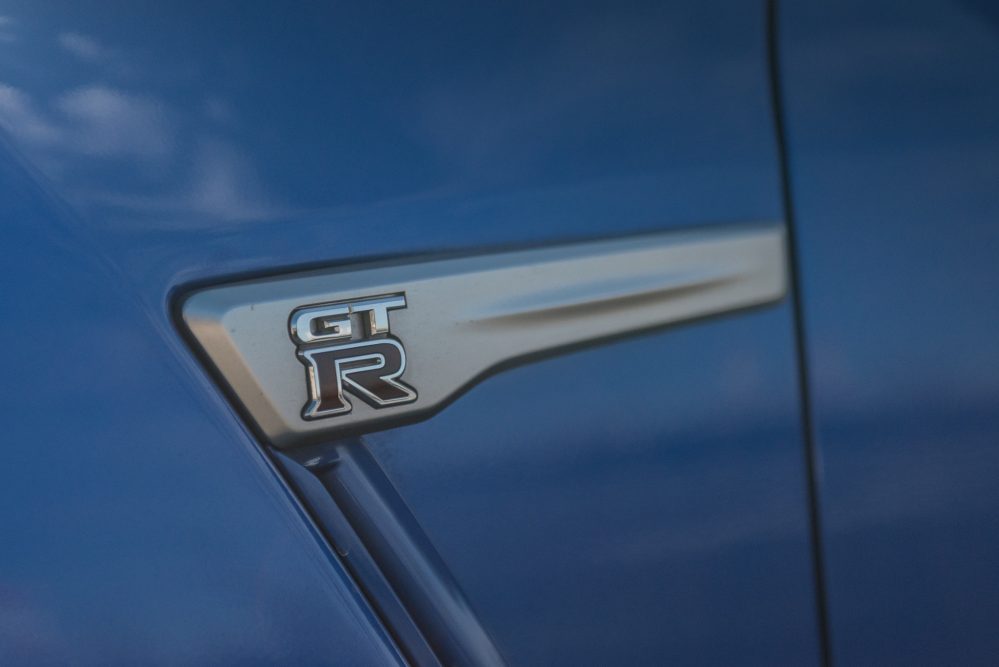 It’s no secret that ten years in, the 2020 Nissan GT-R feels somewhat dated, especially considering that for similar money, you can now buy a BMW M5 with comparable performance and more daily usability. It makes you wonder why Godzilla is still around in its current form and why Nissan still hasn’t overhauled the thing. 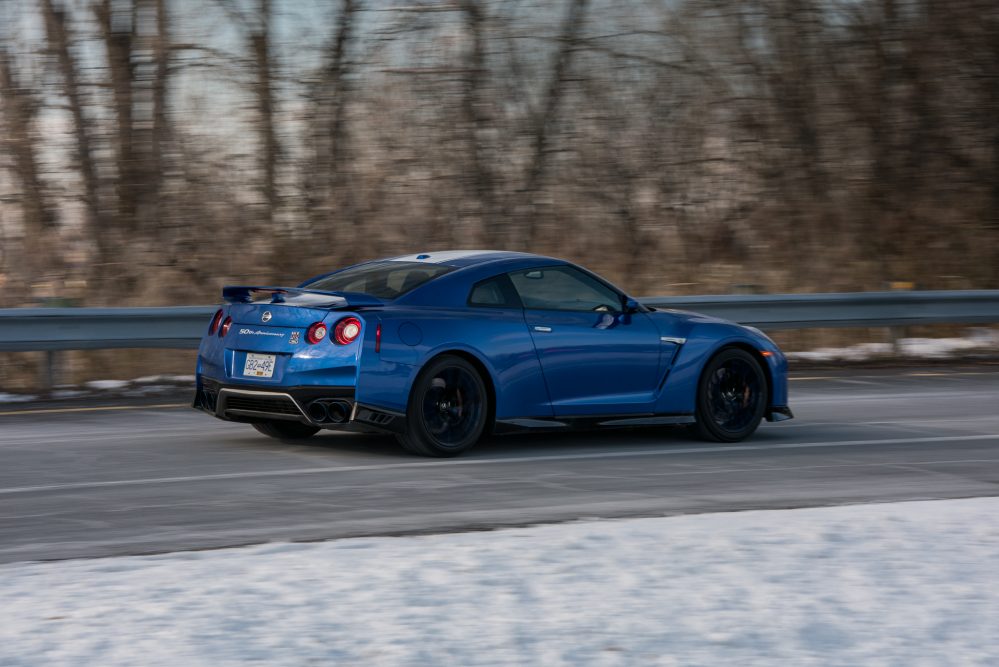 I will however finish off by saying that the GT-R was one of those rare automobiles that generates a lot of stares, many questions and a lot of astonishment from the people who see it. This thing’s a legend, and while yes, most sports cars have since caught up to it from a performance standpoint, the reality is that it’s still up there as one of the best performance values currently on sale.