2020 Volkswagen Arteon Should Perform The Way It Looks 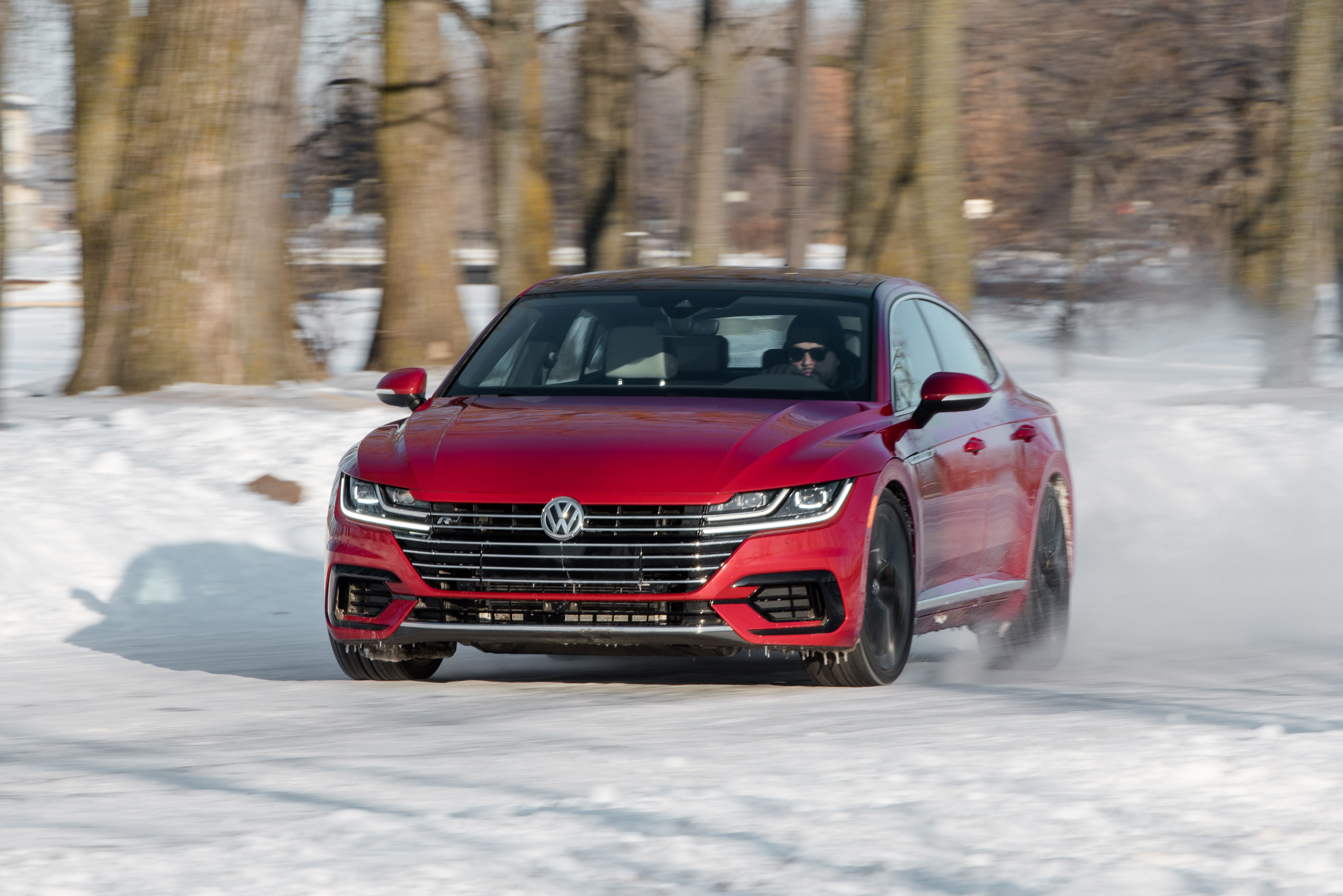 The 2020 Volkswagen Arteon is a car I was really looking forward to drive. I mean, look at the damn thing! Sadly, after a few spins around the block, I was, shall we say, disappointed. I simply wanted more. More of what, you ask? I don’t know, more power? More refinement? More, Stinger? As odd as this may sound, I’m still scratching my head as to why I should get this over the Korean opposition. 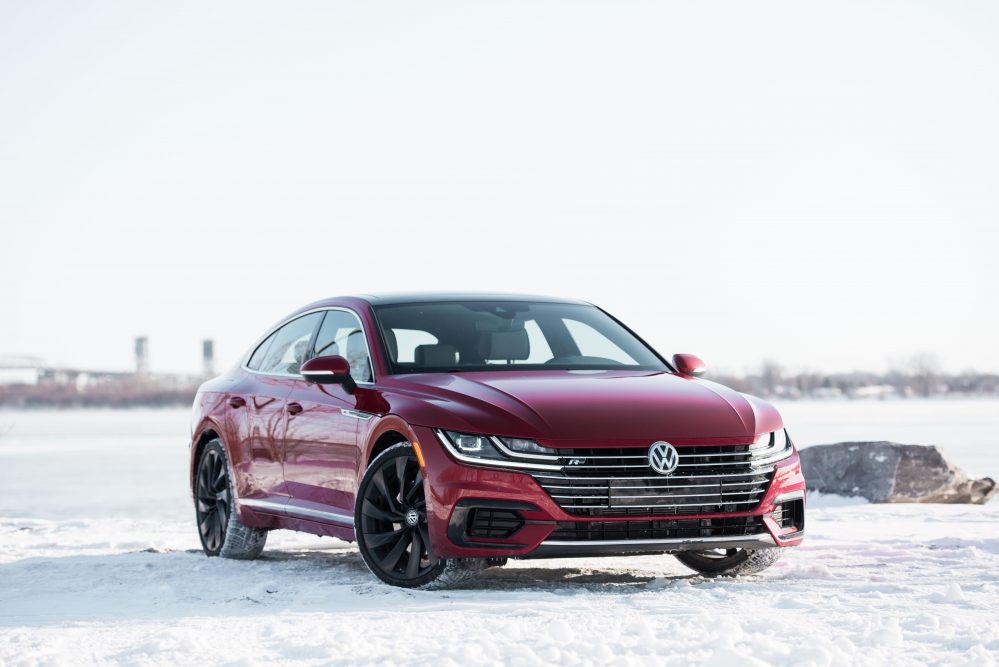 I do find the idea of an Arteon to be a brilliant one, even if probably nobody cares. Because SUV. But damn, this has got to be one of the best looking mainstream sedans currently on sale. What a wonderful way to top the Passat lineup!

Yes, the 2020 Volkswagen Arteon essentially replaces the now defunct Passat CC. It’s a sportier, more elegant and more coupe-like version of VW’s stalwart sedan or, if you prefer, a budget-minded Audi A5 Sportback. That, or one of those weird-looking BMW Gran Coupe things. 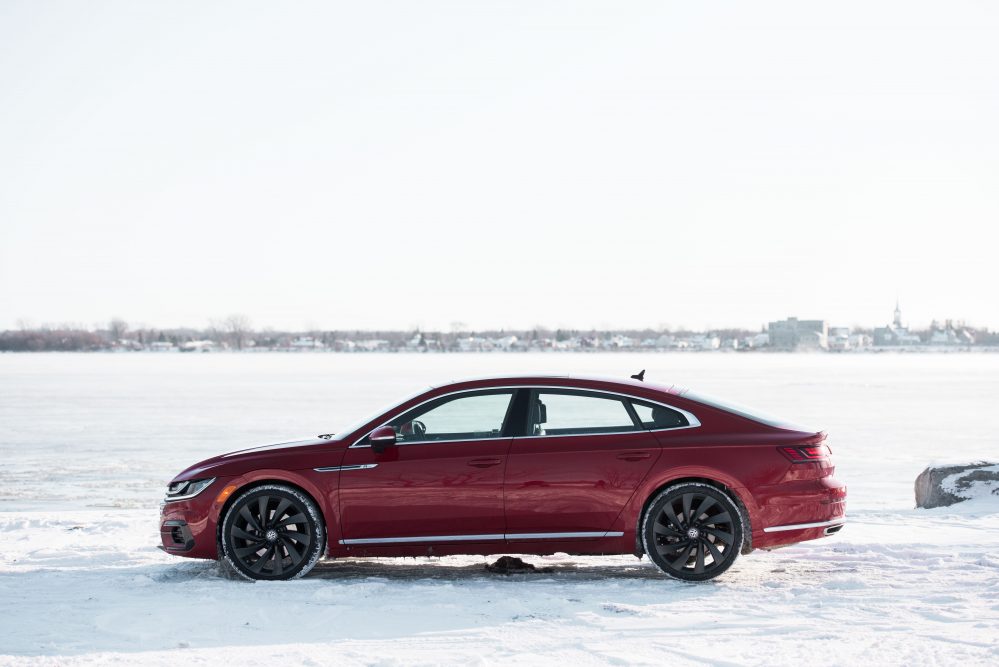 Because of its fastback design, it’s not only significantly more attractive than a regular Passat, it’s also much more practical, which I’ll get back to in a bit. It also doesn’t have many competitors except that aforementioned Kia Stinger and perhaps the recently dead Buick Regal. 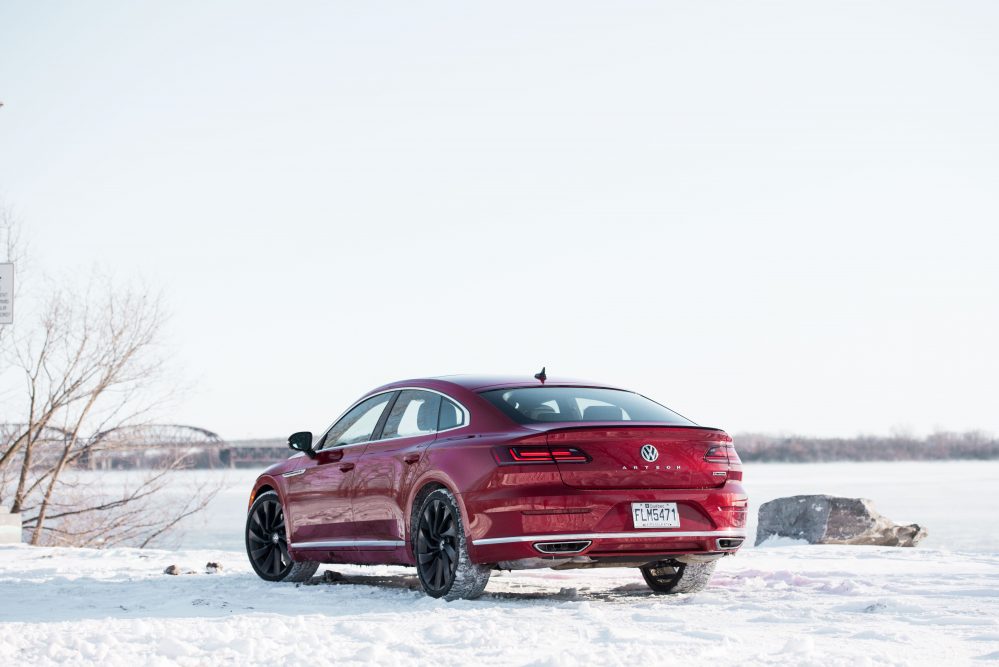 There are a lot of Audi styling cues here, but the Arteon also looks like its own bespoke thing, which feels great considering how the Volkswagen group enjoys sharing bits and pieces from one brand to the next. The entire front fascia has a clean and modern sense of fluidity thanks to LED headlights that appear to be the actual grille moving outside the car. It’s brilliant. The car has a sleek profile, with a nice tapered rear end and taillights that resemble both the CC and the Volkswagen Pheaton. It looks rad as hell. 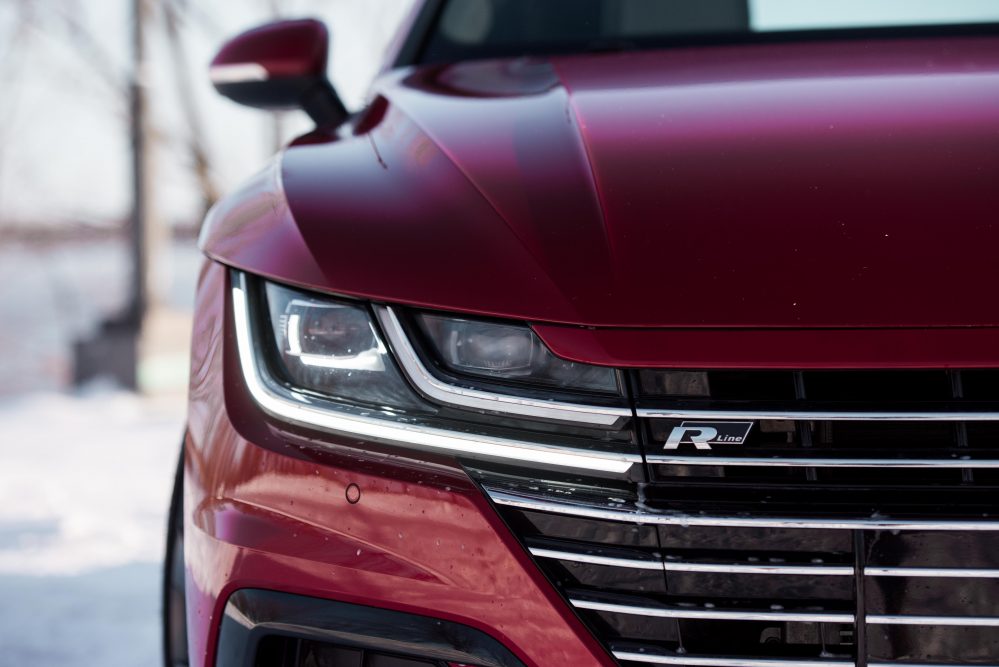 Unfortunately, I can’t say the same about what’s under the hood which is one of the main areas where the Arteon disappoints. Only one engine is available. It’s the, you guessed it, Volkswagen corporate turbocharged 2.0-liter inline four, basically the engine that currently powers everything at VW. 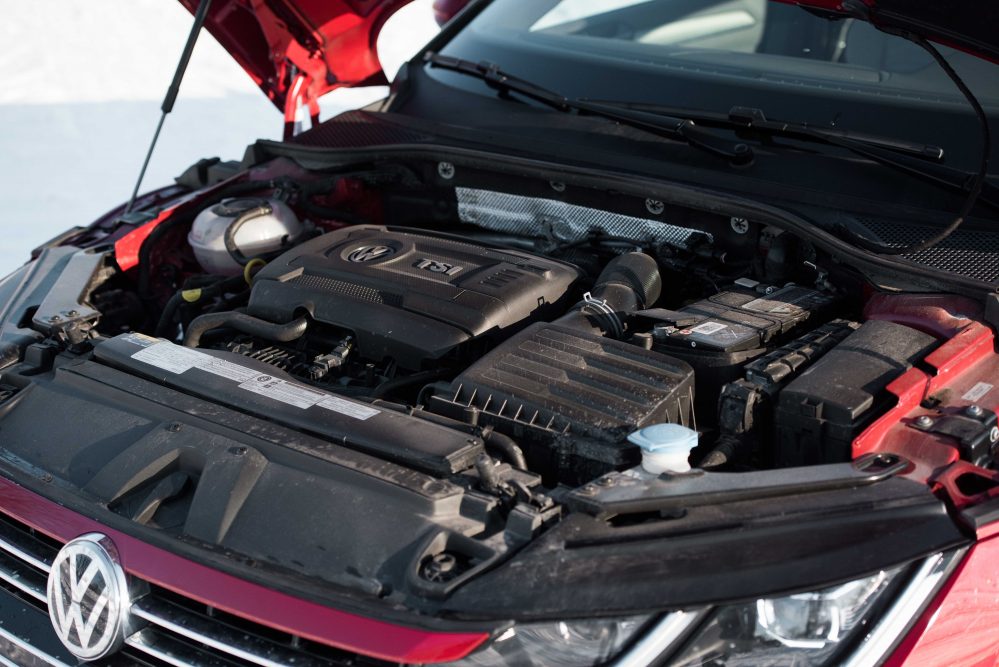 It’s good here for 268 horsepower and 258 lb-ft of torque which isn’t bad, but not firecrackin’ hot either. It can only be mated to an eight-speed automatic gearbox and 4Motion all-wheel-drive, allowing it to sprint from a standstill to 100 km/h in about six seconds.

Again, it’s decent, but not great. 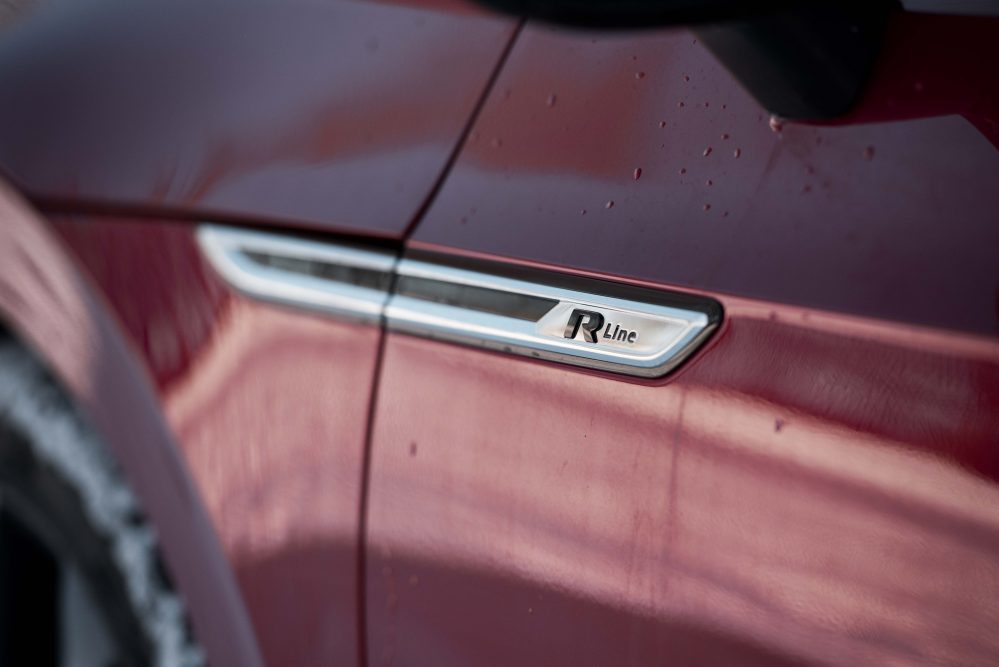 The good news is an Arteon comes out of the box rather well equipped with very little available options. Pricing kicks off at $47,995. My tester, painted in the Chili Red Metallic paint job, had the two optional packages grafted onto it. The $2,095 Driver Assistance package and the $2,995 R-Line aesthetics package which is essentially comprised of 20-inch wheels and a sportier steering wheel fitted with paddle shifters. Final price is $53,085. 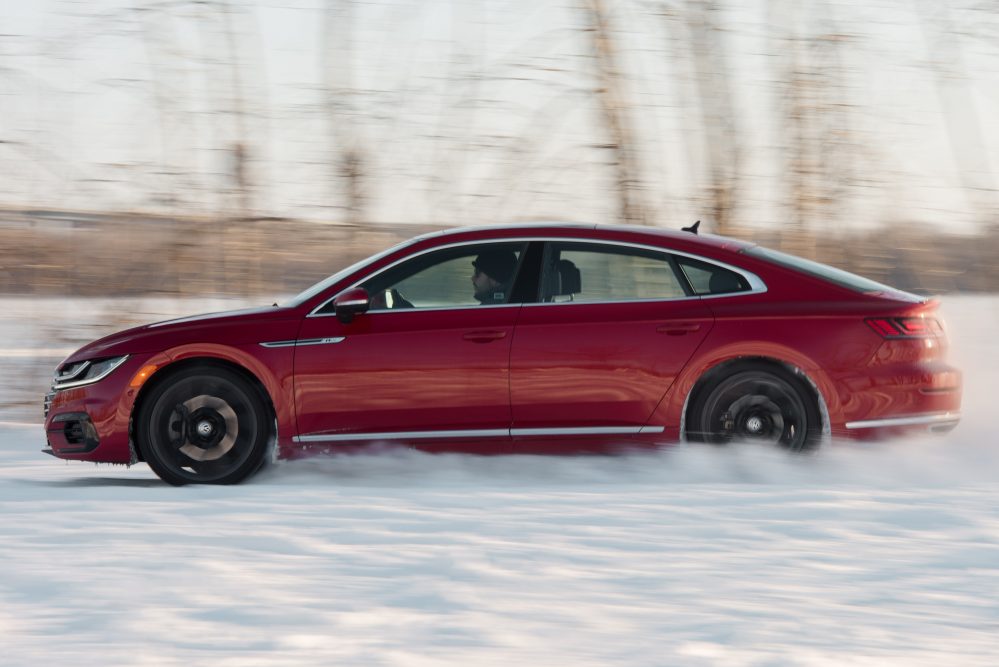 So, when I say the Arteon should perform the way it looks, I mean the drivetrain that sits underneath its gorgeous skin isn’t exactly exciting. Nothing about the way it provides power, torque or even the way it sounds is particularly noteworthy, which is a huge letdown.

It’s not so much the available power that disappoints. I mean, it still makes well over 250 horsepower, which is fine, even though a – AHEM – Toyota Camry V6 makes 300 horsepower now. No, the Arteon’s performance disappoints because there’s no urgency or no sense that the car even wants to get up and go. 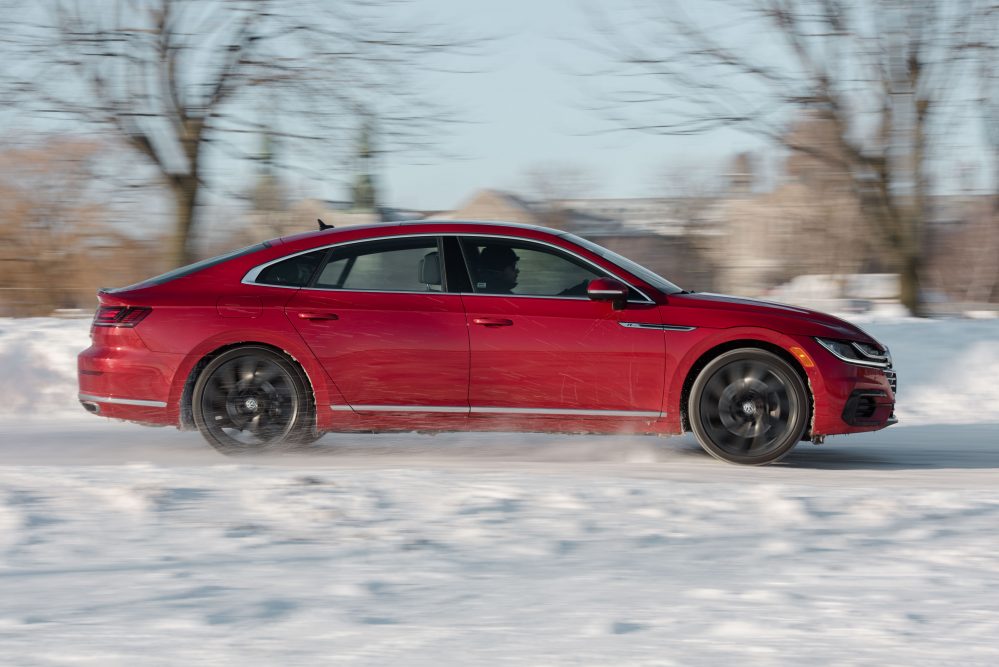 Now, at this point, I know what you’re thinking: that the target clientele for such a handsome sedan cares not about launch control and Nürburgring lap times. And you’d be right. What I’m getting at is past Volkswagens always felt quick and spirited, even when they were underpowered. There was a sense of urgency in the way they’d put the power down, making them fun to drive and over-engineered.

There’s none of that here. Instead, the turbocharged four is loud, doesn’t sound all that sporty and acceleration is lukewarm at best. 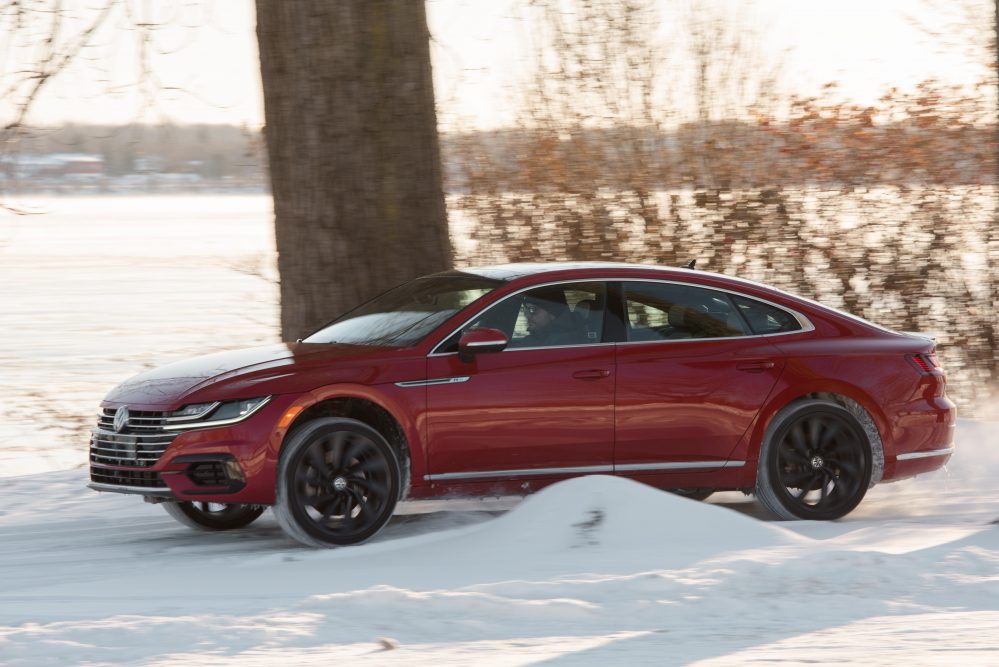 At least, I did get to drive the Arteon during a few heavy snow storms, which allowed me to sample the 4Motion all-wheel-drive system. That, at least, performs the way I expected, which allowed me to enable in some rather pleasant drifts and sideways slaloms on the slippery stuff. My only complaint was having to remove traction control EVERY SINGLE time I sat in the car. That, and proximity sensors that kept acting up the moment there was too much snow on or around the car.

To Volkswagen’s defense, this is a problem with all new cars. 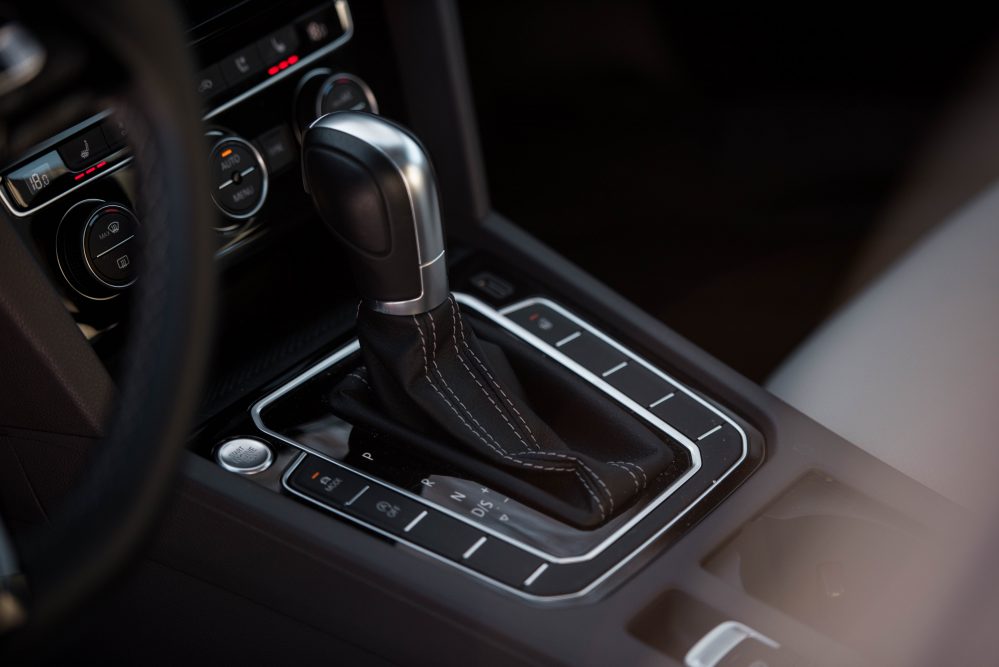 So, the 2020 Volkswagen Arteon isn’t super quick, but it does handle rather well. It’s based on a stretched MQB platform, the same as a Golf, so it has that going for it. And honestly, except for a rear-end that feels, well, stretched – like in the Tiguan, Atlas and Jetta – this is rather solid, allowing you to gun it through a corner and have some good old fashion fun behind the wheel of a German car. 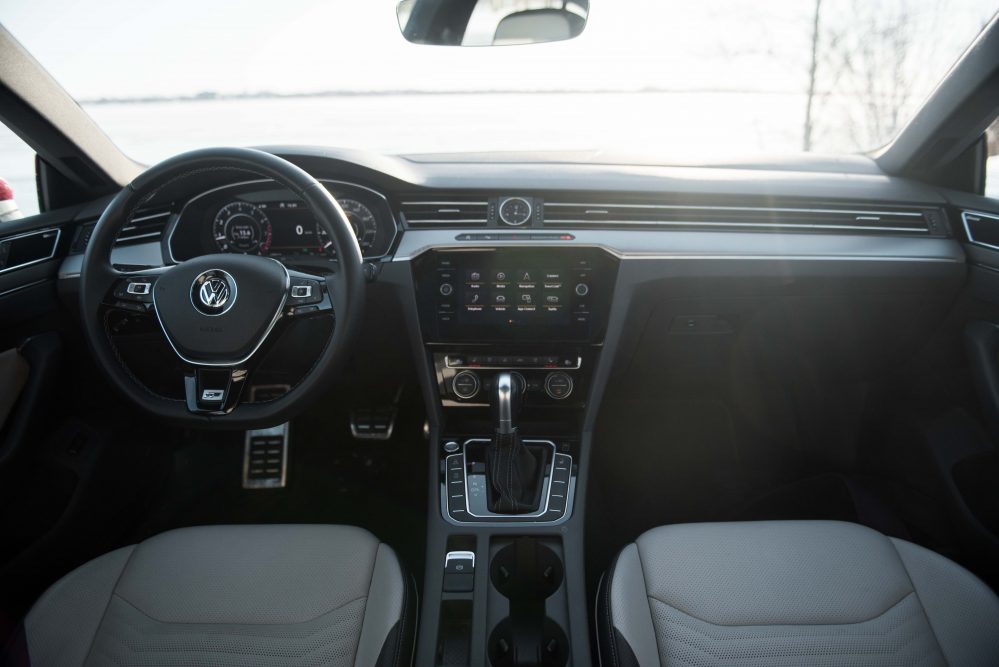 Things start falling apart in the areas that really matter. Step inside, and the Arteon looks just as good as its exterior. It’s a clean, uncluttered and functional design, with well-laid out controls, a fantastic seating position and room for days out the rear. 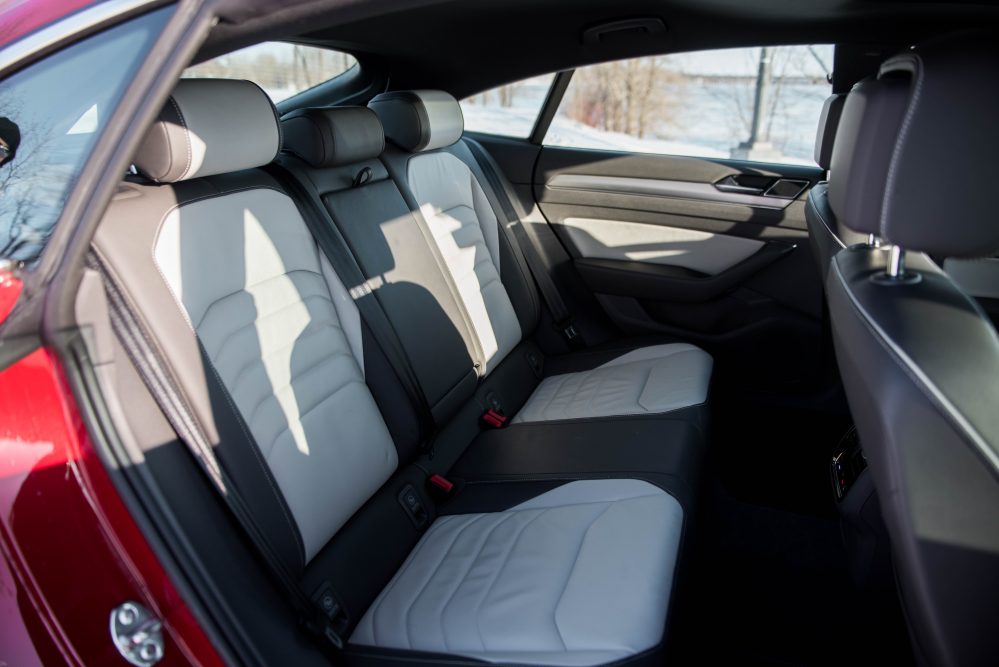 The trunk is also massive, engulfing up to 1,557 liters of your junk, which is a full 400 liters more than a Stinger. The infotainment interface is also well done, simple and actually usable. Good job Vdub. 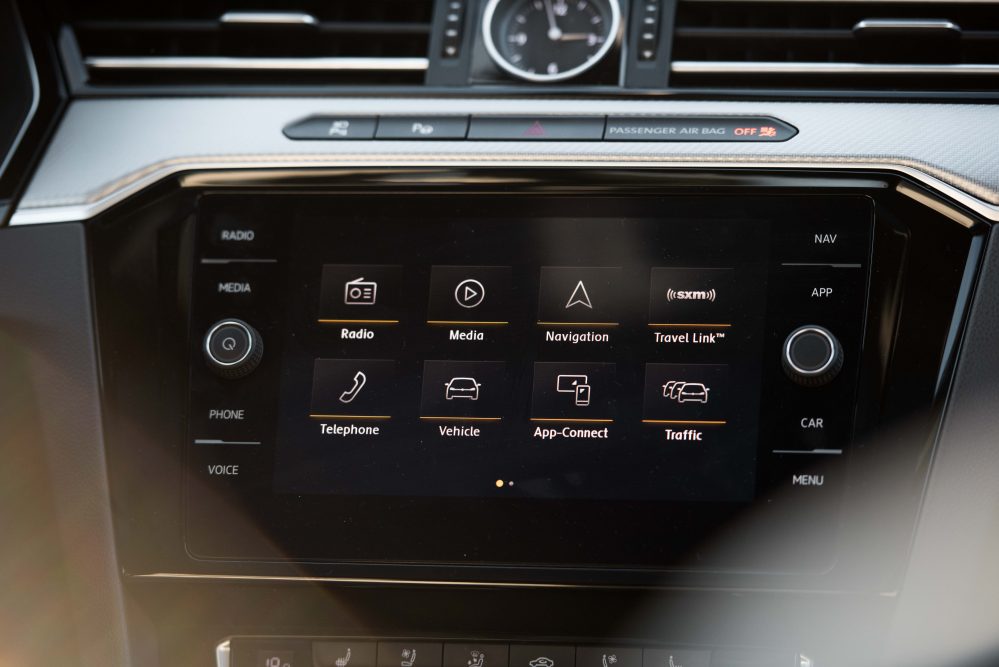 The problem resides in this car’s overall build quality. Materials appear to be upscale, but they’re in fact flimsy pieces of plastic. In some cases, it’s frankly exaggerated. Take the rear cabin light as an example. It appears to be taken out of an Audi A6 from its expensive and fancy styling. Until you tap it. Doing so will reveal a flimsy unit that seems to have been taped onto the roofline, similar to an old Ford Econoline. 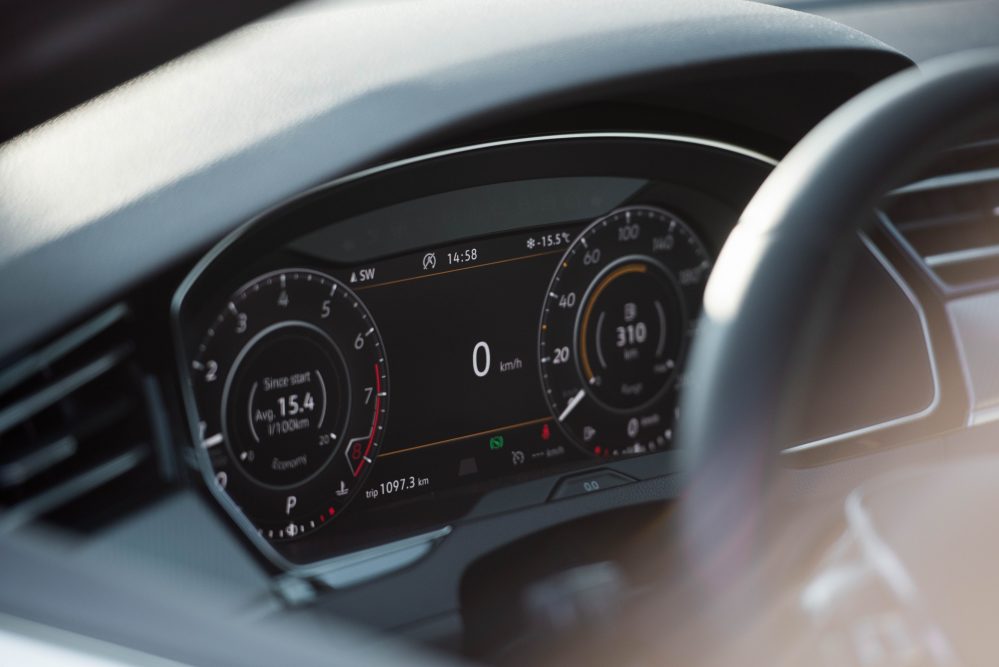 Then, there are the cabin rattles my tester was plagued with. Normally, when driving a Volkswagen, you expect the car to be rock-solid, built like a tank, eating up potholes like it’s addicted to them, revealing stellar build quality. Not so much here. The Arteon feels fragile when driven over uneven roads. It rattles, clunks and simply feels like it’ll fall apart. It feels less solid than a goddamn Kia! And that’s just plain wrong. 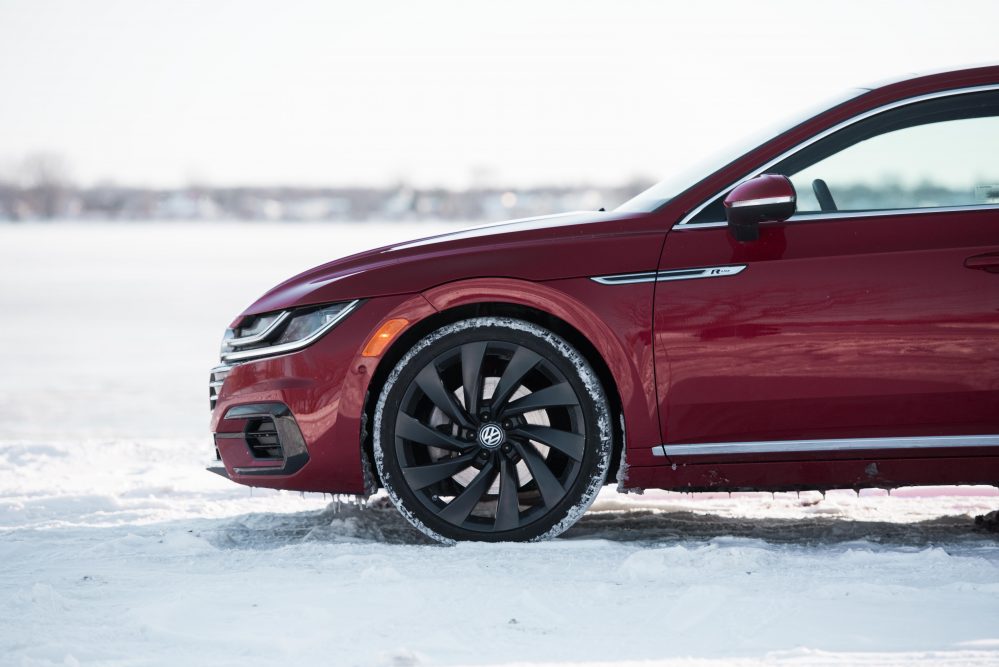 I get that Volkswagen tried to cut costs here to make this more affordable than an Audi. But it still sells for over 45 grand for crying out loud. Sadly, the price isn’t justified. 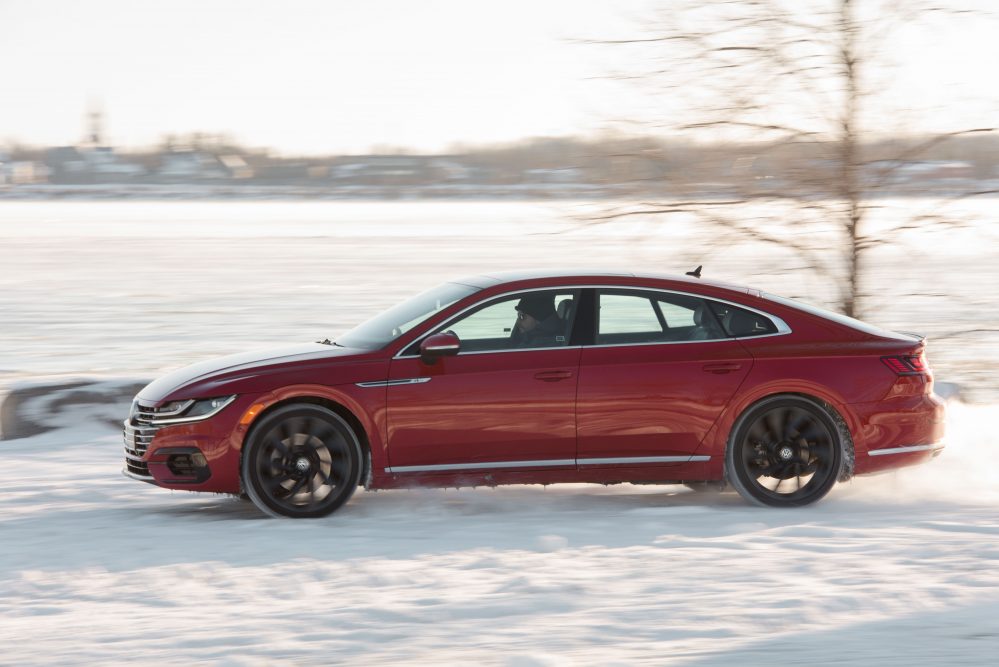 To wrap it all up, the 2020 Volkswagen Arteon is a fine-looking sedan that you and your family will enjoy sitting inside all while filling the trunk with your gear. What it needs is an engine, more character and above all, build quality. Volkswagen, it’s time you take the Korean opposition seriously, because if you don’t, they’ll eat you alive real quick.