2022 Volvo XC90 Recharge Somehow Still Feels Ahead Of The Curve 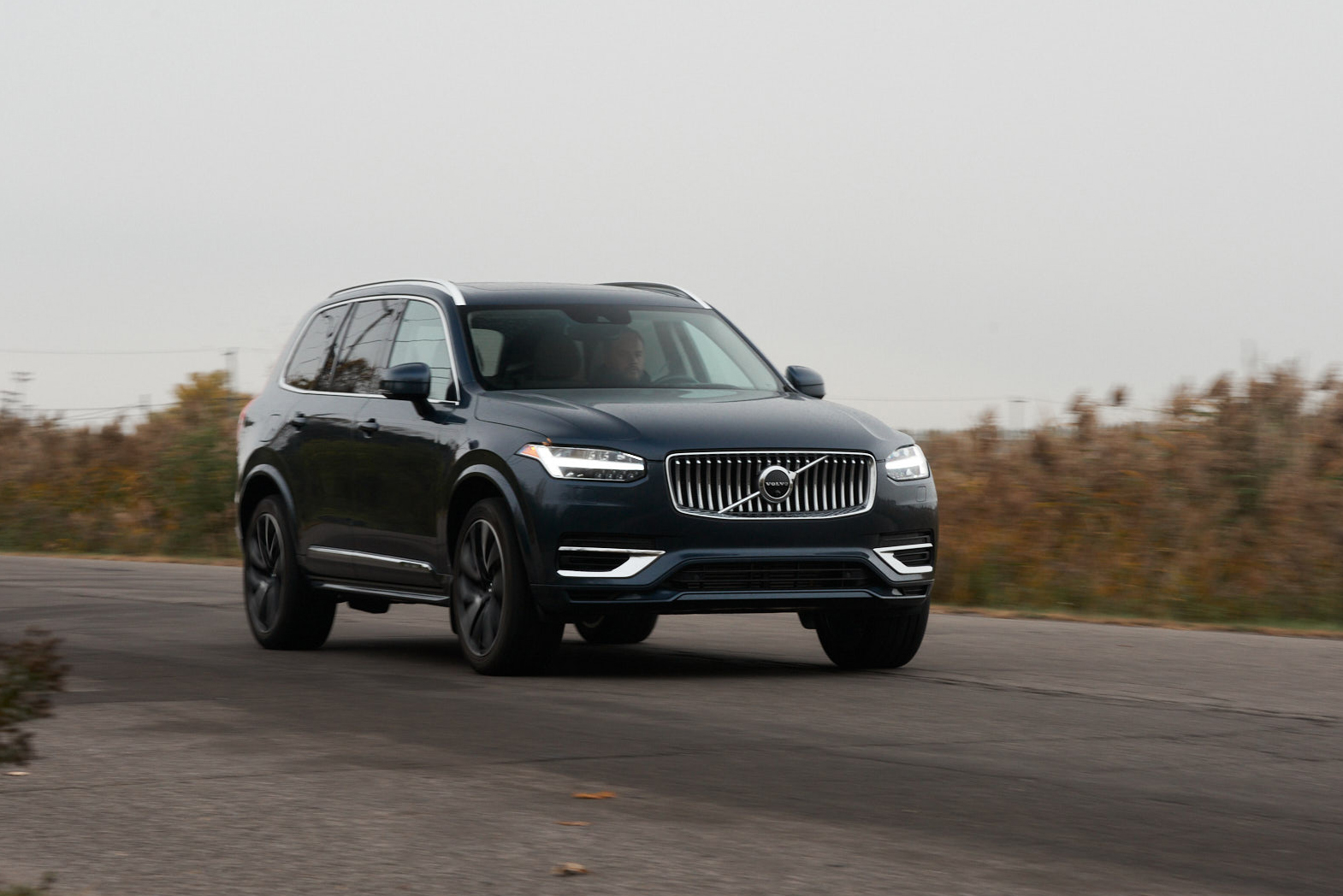 The 2022 Volvo XC90 Recharge may have a new name, but don’t be fooled, this is still very much the same XC90 T8 that I drove back in 2016. Yet, somehow, and someway, the XC90 still feels tremendously ahead of the curve, to the point where it’s still considerably more advanced than several new rivals. 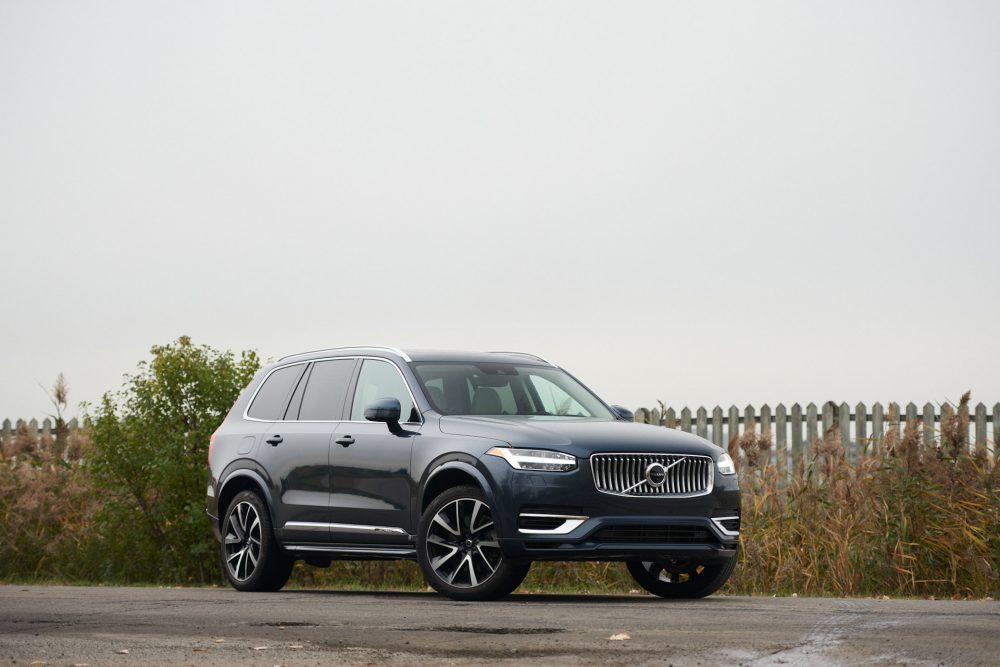 Volvo did bring a few minor updates to the XC90’s front fascia last year, like a revised lower air intake and new wheels. Most of this SUV’s fantastic design remains unchanged, however, and that’s a good thing. Special mention goes to the always attractive Thor’s Hammer LED headlights, a now common Volvo design trait, but that originally day viewed on the XC90. Even six years in, this remains one of the most elegant luxury midsize SUVs money can buy. 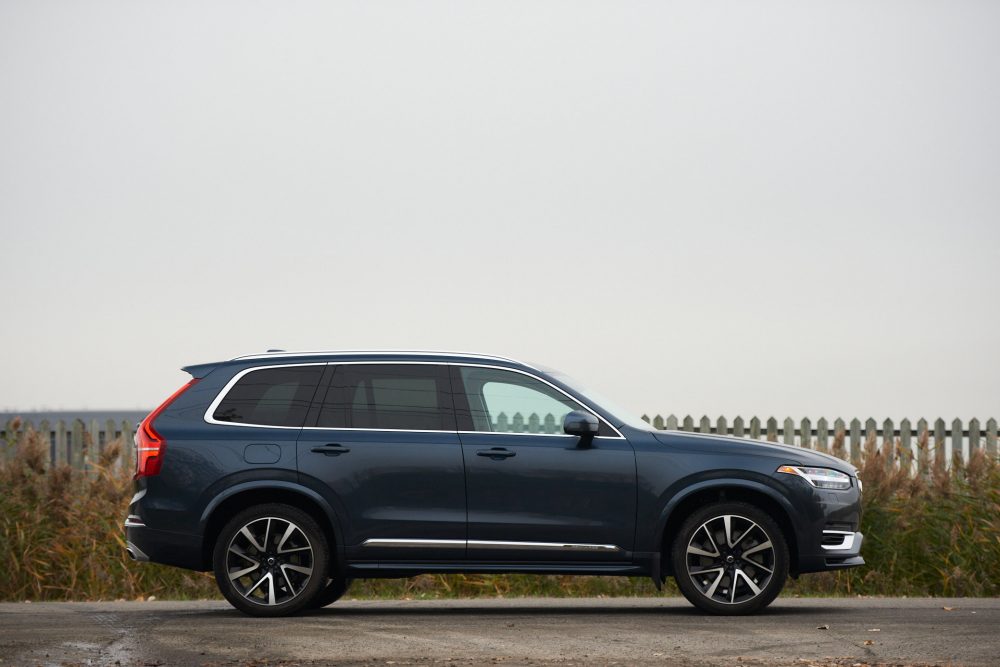 The model I was driving was the Inscription Expression trim, or the base model for the Recharge which carries on with the same plug-in hybrid powertrain as previous T8 models. None of that has changed, yet, it’s still very much a technological showpiece, and also one that could prove highly costly to maintain. 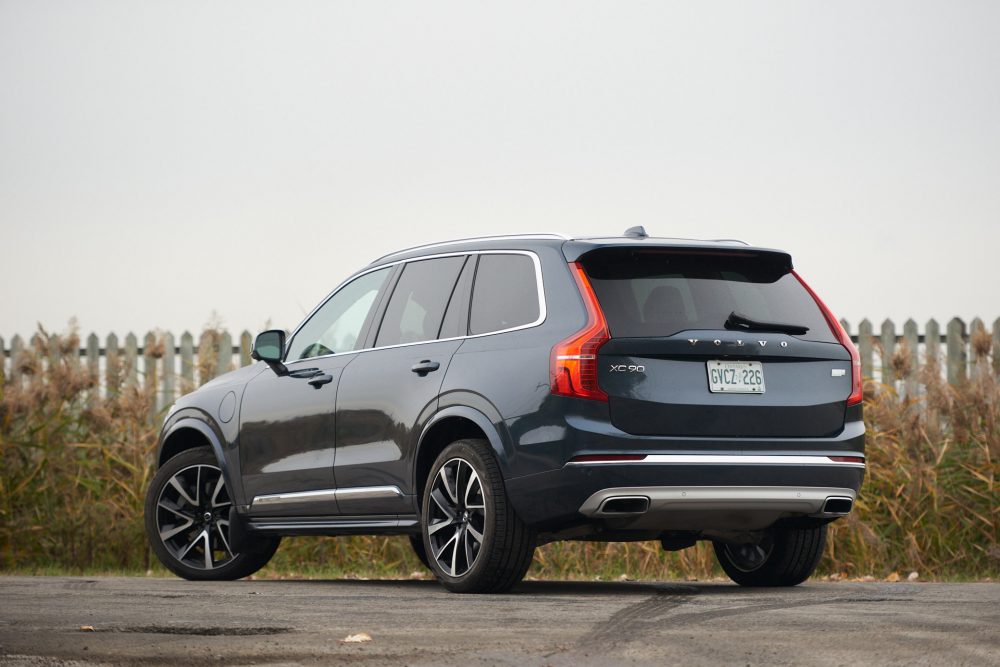 Here’s how it works: at the center of it all lies a 2.0-liter four-cylinder that’s both turbocharged and supercharged. Volvo then installs an 11.6 kWh battery pack underneath the XC90’s body to power an electric motor that’s installed on the rear axle. On its own, that motor pumps out 87 horsepower and 177 lb-ft of torque. It also allows the XC90 Recharge to be all-wheel drive. However, when the vehicle is running on electric power alone, only the rear wheels are driven. In this mode, the Recharge can to drive 32 km on a single charge. 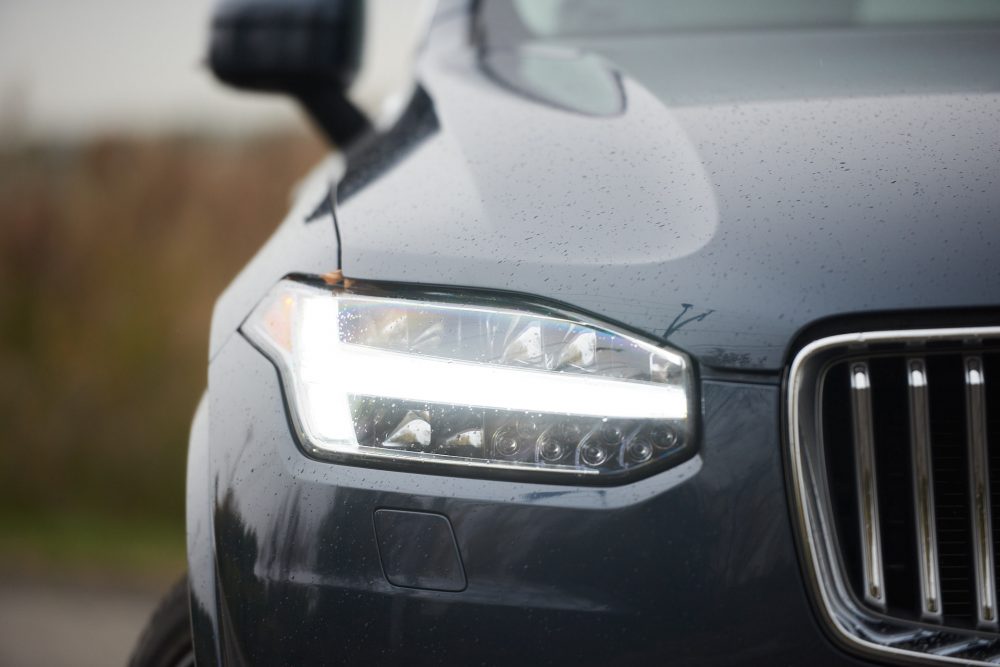 The system’s total output when the battery is fully charged is 400 horsepower and 472 lb-ft of torque. It’s mated to an eight-speed automatic transmission. I know, 32 km of electric range is a bit weak compared to newer offerings like the BMW X5 xDrive 45e (52 km), but Volvo’s T8 drivetrain is better suited for alternating between gasoline and electric propulsion than pure electric driving alone. Doing so will allow you to record impressive gas mileage. I got 5.3L/100 km with mine, impressive considering how massive this thing is. 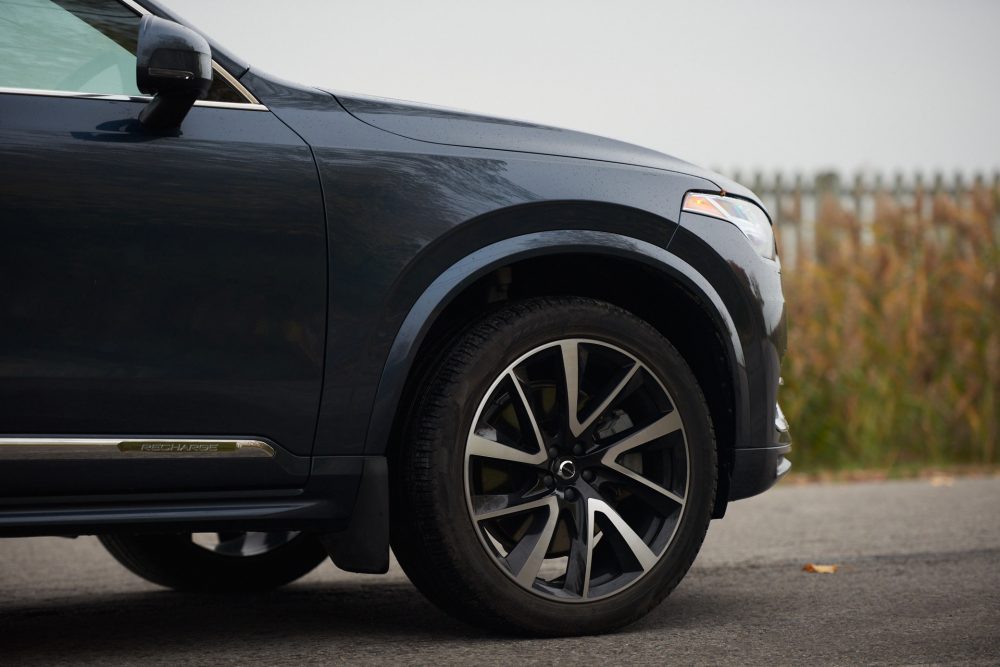 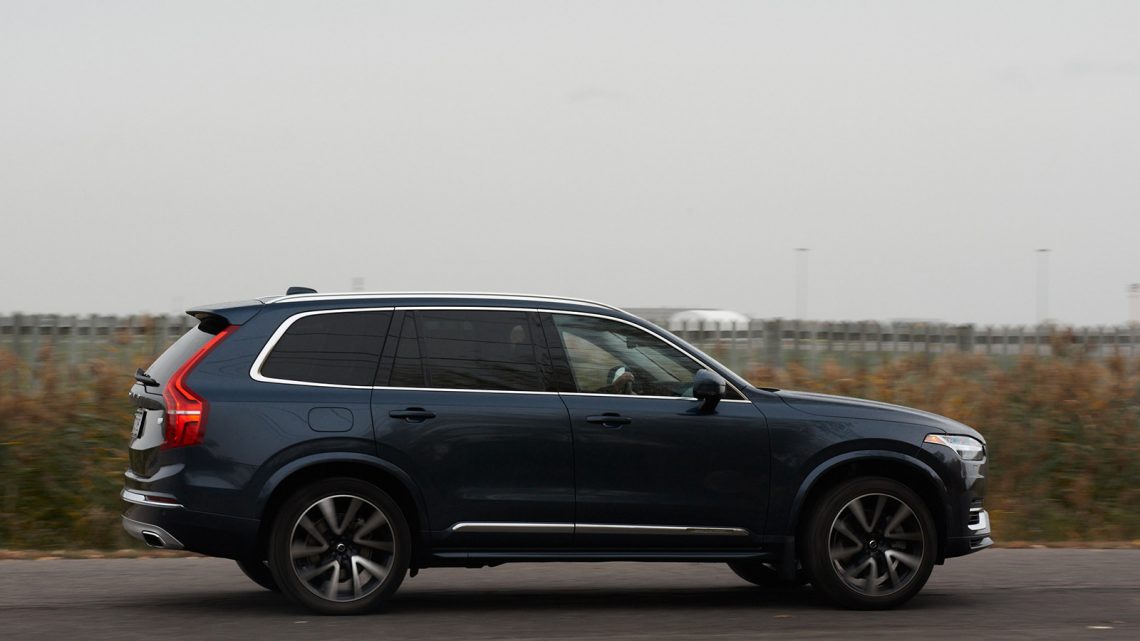 While most luxury carmakers focus on handling dynamics and acceleration times, Volvo has been on a mission lately to offer a stress-free driving experience instead. The XC90 is the embodiment of this branding strategy. Each time I get behind the wheel of this thing I immediately feel good about my life. There’s something heartwarming about strapping yourself into the unbelievably comfortable leather seats of a Swedish-engineered automobile – even though Volvo is now mostly Chinese… 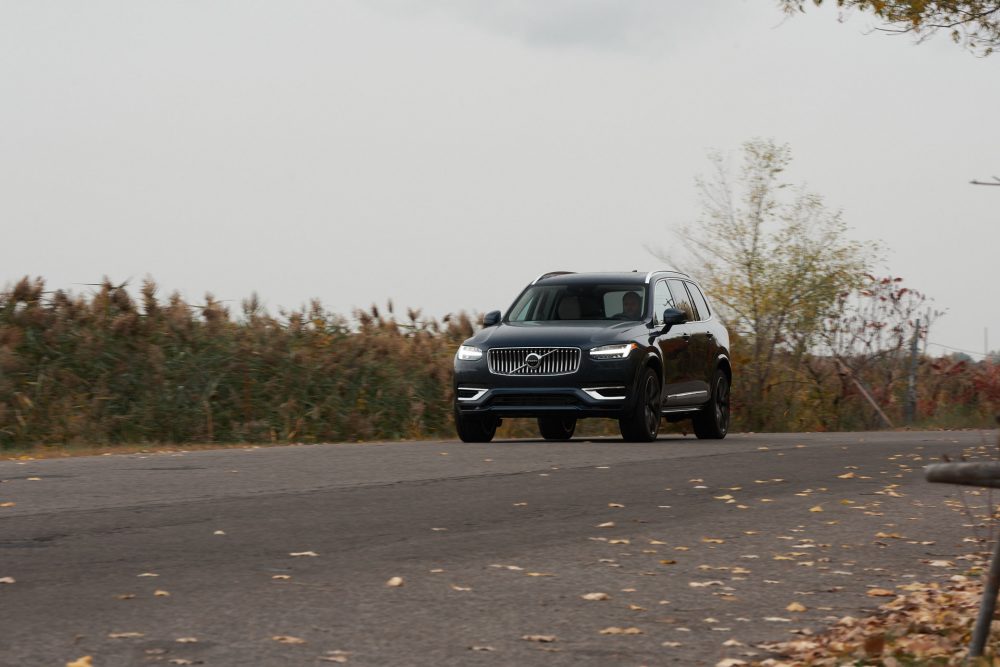 Yes, the 2022 Volvo XC90 Recharge can be quick. Once its battery is fully juiced up and you select its comically named Power mode, it’ll sprint off the line with much anticipation, recording frankly brisk acceleration. But it never feels fast. That’s because that’s not the point. 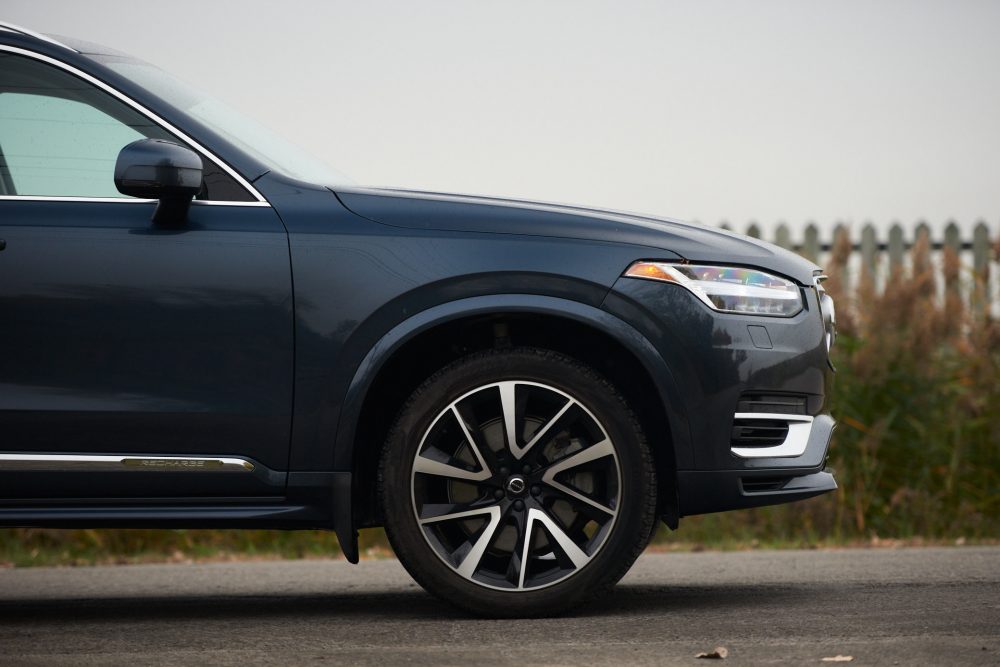 Most of that laid back feeling comes from the drivetrain’s complexity. There’s a lot going on under the hood, meaning there’s a considerable delay between the moment you gun the throttle and when the transmission downshifts, the turbo spools up, the supercharger does its thing, and the electric motor provides propulsion. Plus, that poor little four-cylinder sounds thrashy when you put it through its paces. Yes, once the XC90 finally knows what it wants, it’s quick. But it never feels like that’s what it was designed to do. 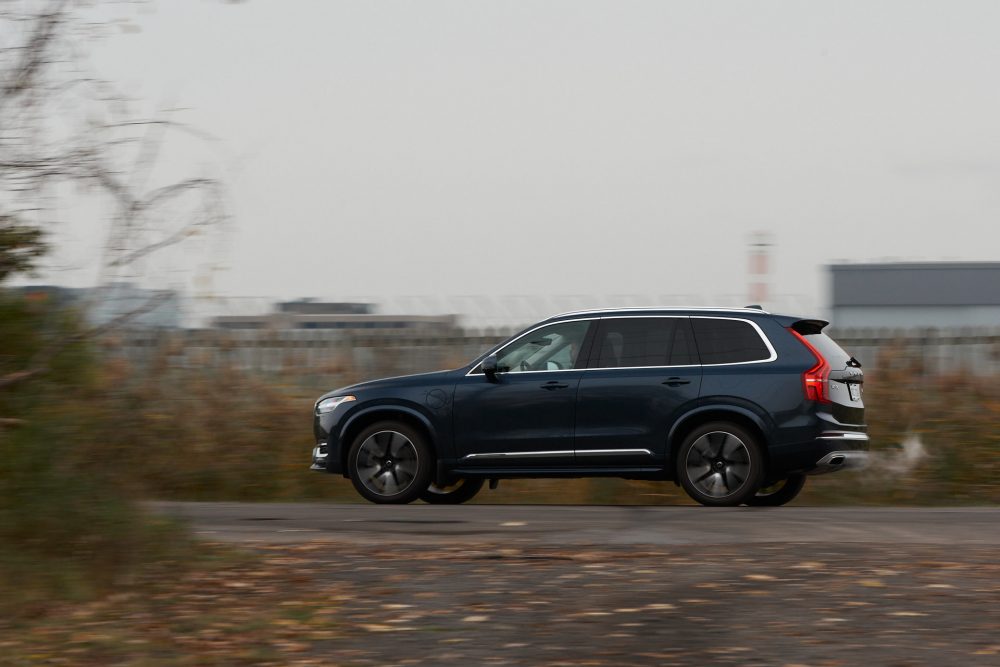 Set it back to its Hybrid setting, however, and that’s really where it’ll show you its true colors. In that mode, the XC90 Recharge automatically decides when to consume gasoline or rely on electric power alone, or both. Not only will it become highly fuel efficient this way, it’ll return a butter smooth ride, one that’ll quickly discourage you from doing stupid things behind the wheel. 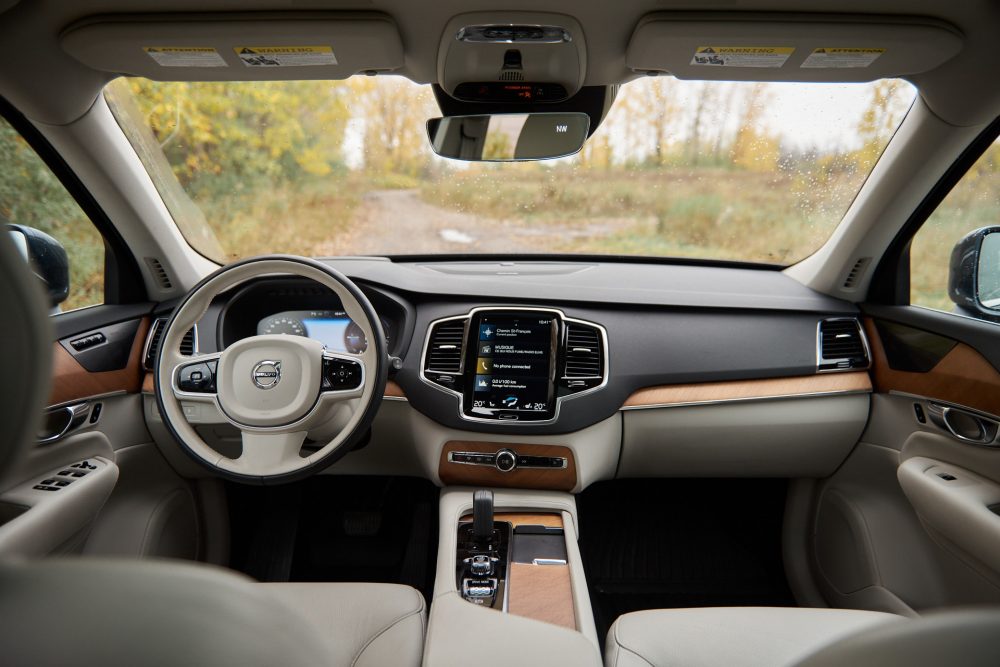 Doing so will also reveal this SUV’s fantastic noise insultation, class-leading build quality and rich materials that allow the XC90 to feel like a properly luxurious item. And while I continue to find Volvo’s dampers way too stiff for our roads, the XC90 is a surprisingly capable machine in the corners. Turn in is actually…quick and there’s a light, nimble feel in the way it takes on a corner that makes it feel a lot smaller than its dimensions suggest. 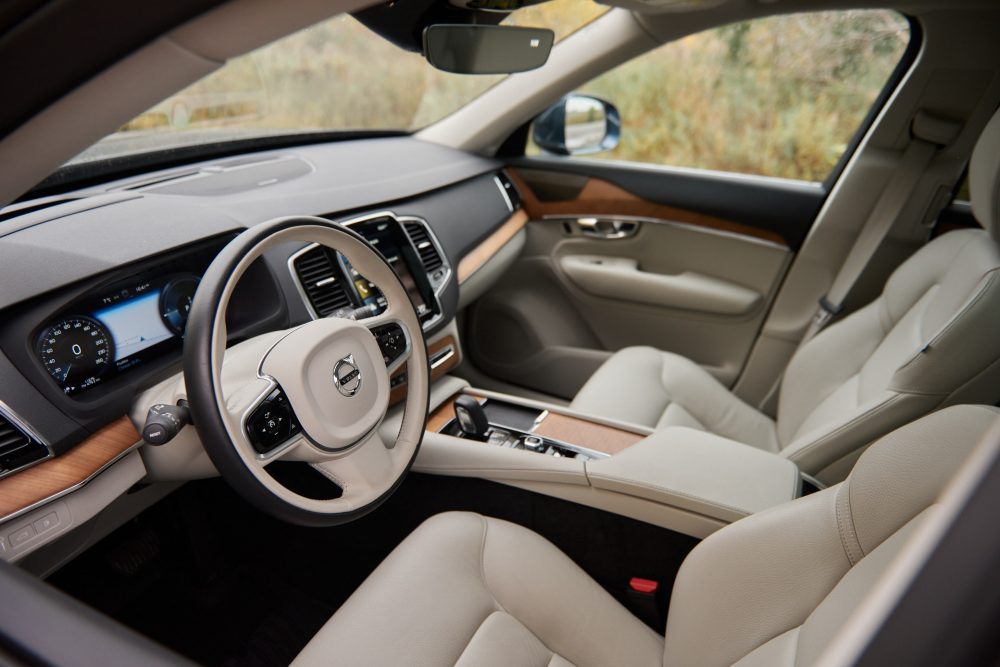 The 2022 Volvo XC90 Recharge’s cabin is beautifully design, with a clean, uncluttered theme and spot on ergonomics. I personally adore the cream leather seats and surfaces of my tester. They contrast well with the light wood trim. Metallic accents on the speaker grilles, central starter button (a reference to SAAB) and drive modes add to the XC90’s expensive feel. That pure, understated look is carried over to the instrument cluster as well, where gauges are beautifully displayed in a digital readout. 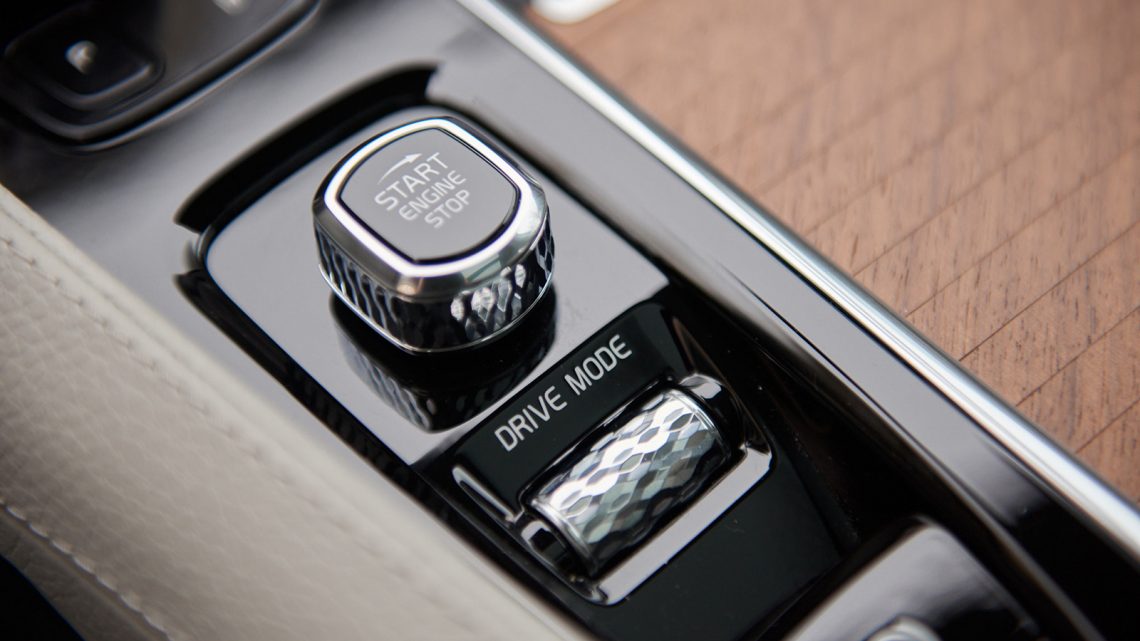 Volvo’s Sensus infotainment system has done big strides in operating speed since its early days. It’s definitely a quicker-responding interface than before, with a portrait-style layout that takes a while to get used to, but somehow works. Sadly, the climate control settings, along with the heated seats, are annoyingly hidden behind a touch-operated menu, which takes a while to load when the car is cold-started. 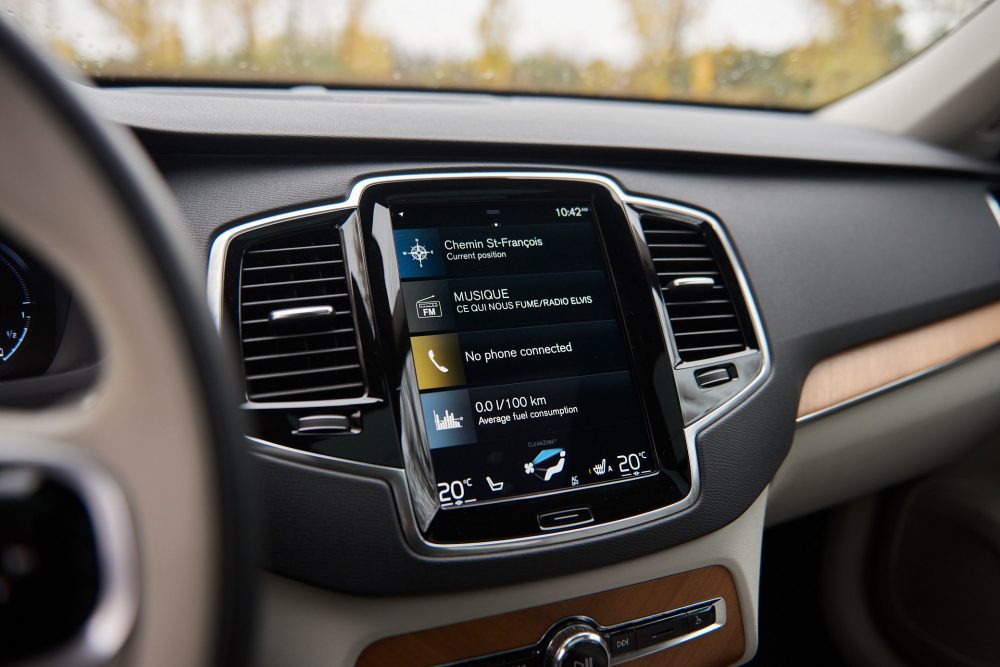 And if you’re not familiar with the system at all, you’ll never know there’s an entire settings menu hiding on the left swipe section of the system, unless a Volvo rep tells you, or you read about in the user’s manual. 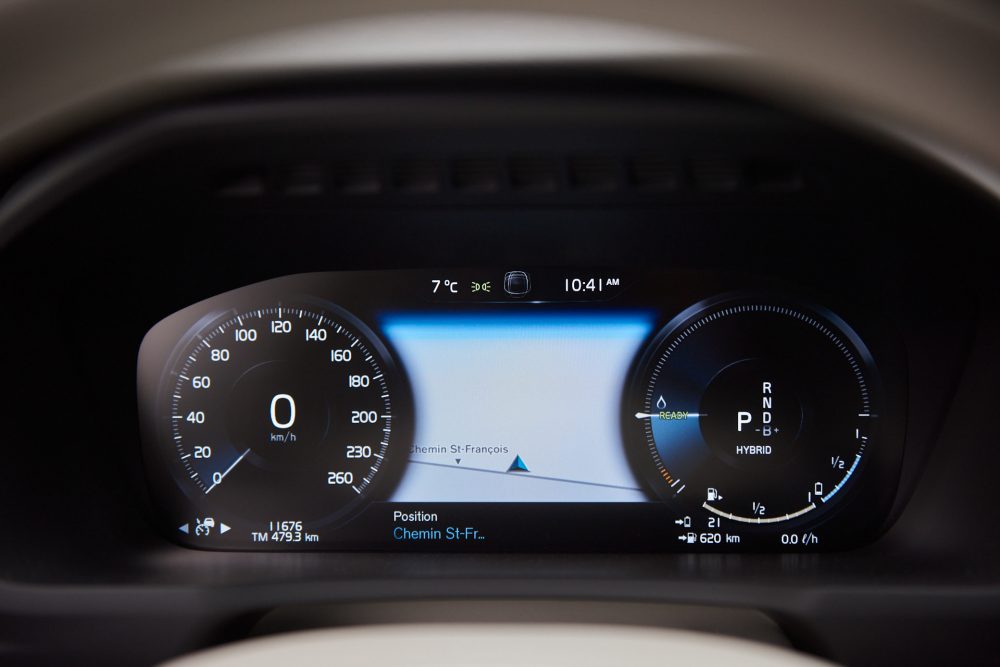 Finally, while all of the XC90’s seats are comfortable and supportive, accessing that third row can prove a little tricky due to a tight entry way. And once back there, only children or short people will find comfort as leg and head room is a squeeze. In that respect, an Acura MDX clearly beats the Volvo. The MDX (2,690 liters) also destroys the XC90 (2,135 liters) in total cargo space. 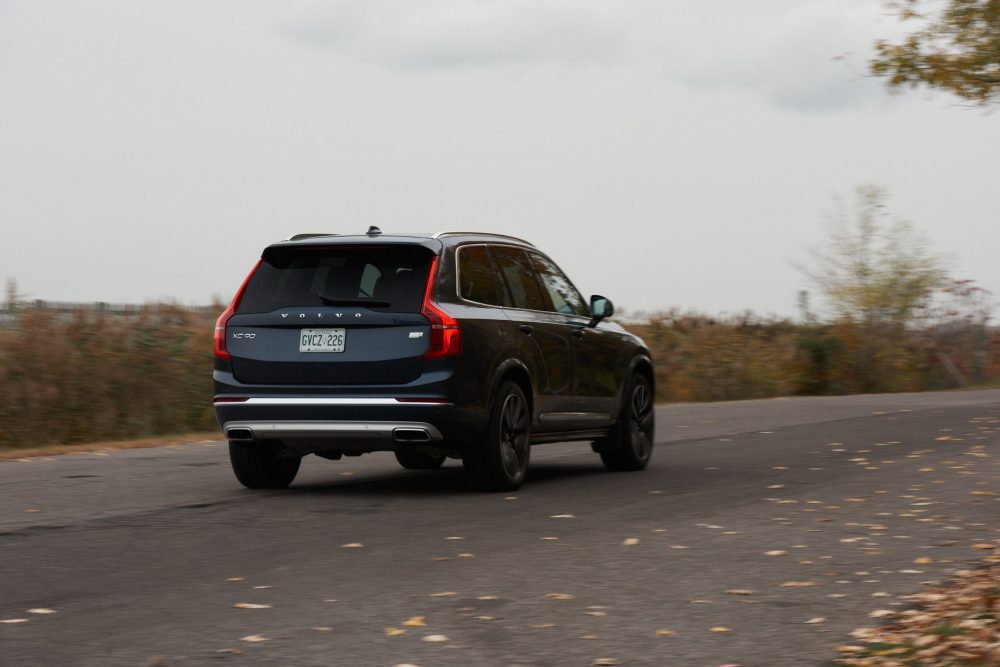 But then, that posh Honda still relies on an old gasoline-powered V6 engine. Acura, or other competing brands like Infiniti, Cadillac and Genesis, still don’t offer anything nearly as fuel-efficient or technologically advanced as the XC90’s T8 plug-in drivetrain. And that thing came to the market six years ago. Next year, Volvo will release a slew of interesting upgrades to that architecture thanks to three-layer battery technology. Expect more range, more power and even more fuel economy from this stylish and quirky Swedish work of art.