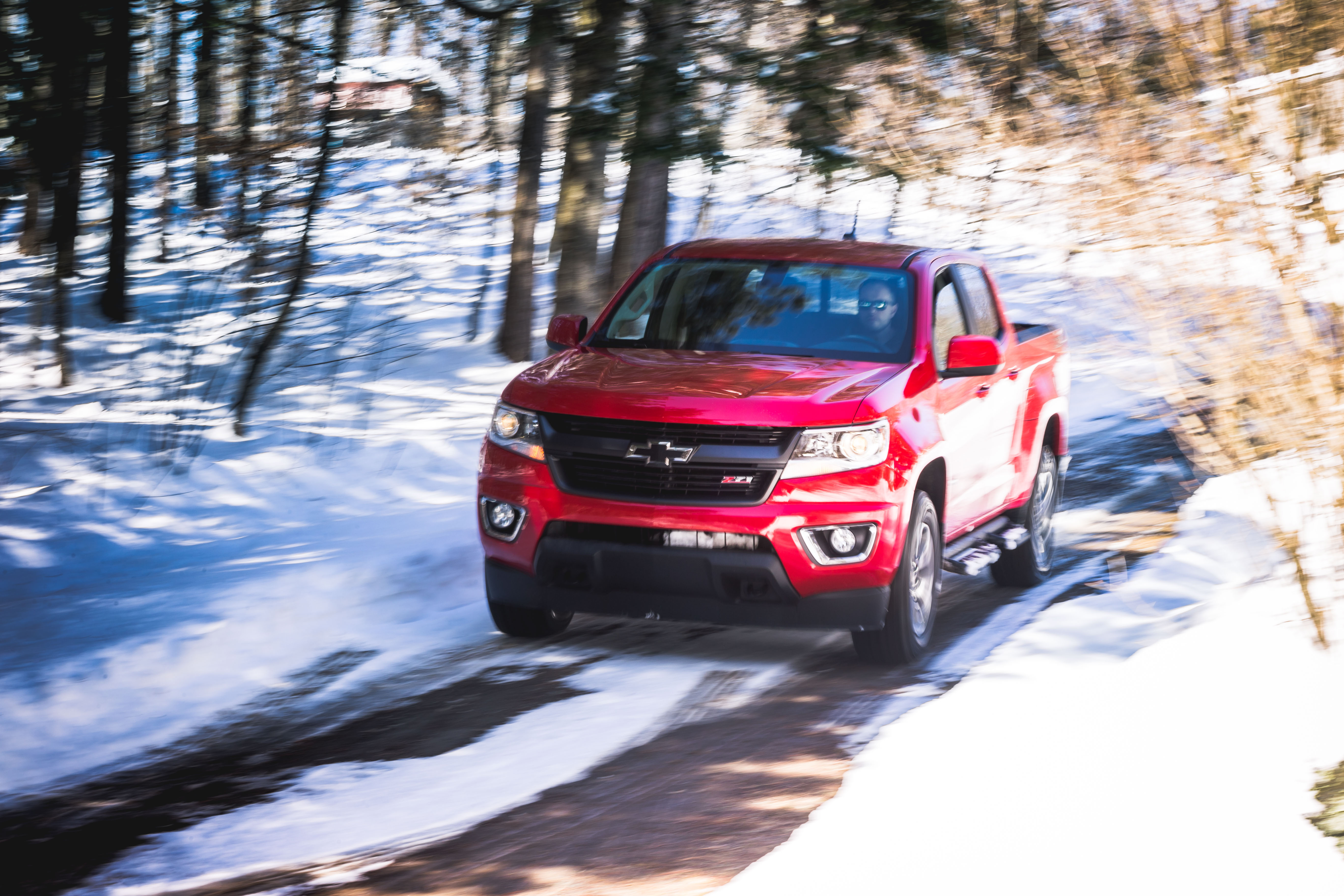 The Honda Ridgeline showed us that a truck doesn’t need to fit the traditional model to be an actual truck. That’s because not everyone needs a 10 000 lb towing capacity, which is why medium-sized, light-duty trucks are so appealing: they fulfill more sedate, but equally necessary utility needs without the lane-hogging size.

But Chevrolet thinks otherwise with its Colorado. It believes that a small truck can in fact trade punches with the larger ones. With power and utility credentials on par with full-size trucks from a decade ago, Chevy’s “little” truck is changing the way we perceive the segment, making the breed evolve, and proving to the entire world that small doesn’t necessarily mean weak.

Not So Tiny After All 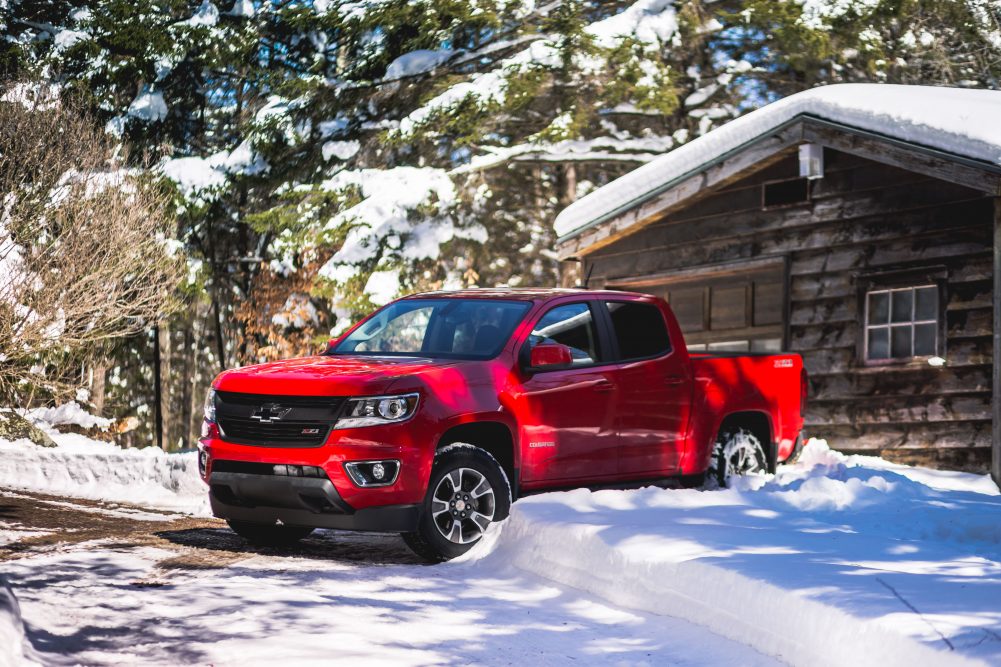 Introduced just two years ago, the Chevrolet Colorado has already undergone mechanical updates. What was originally a formidable compact packaging solution remains intact, however, and although this Chevy is qualified as small in GM’s lineup of trucks and SUVs, it’s actually close to the same length as its larger brothers. Measuring in at 5.3 meters long, would you believe that the Colorado crew cab you see here is the same length as a single-cab Silverado 1500? Yeah, small, my ass. It’s also a testament at how rapidly trucks are changing. But the Colorado is also narrower than its full-size brethren, a full 15 cm actually, making this mini Chevy much easier to maneuver through a Canadian Tire parking lot, which is presumably what most owners will end up doing with theirs anyway. 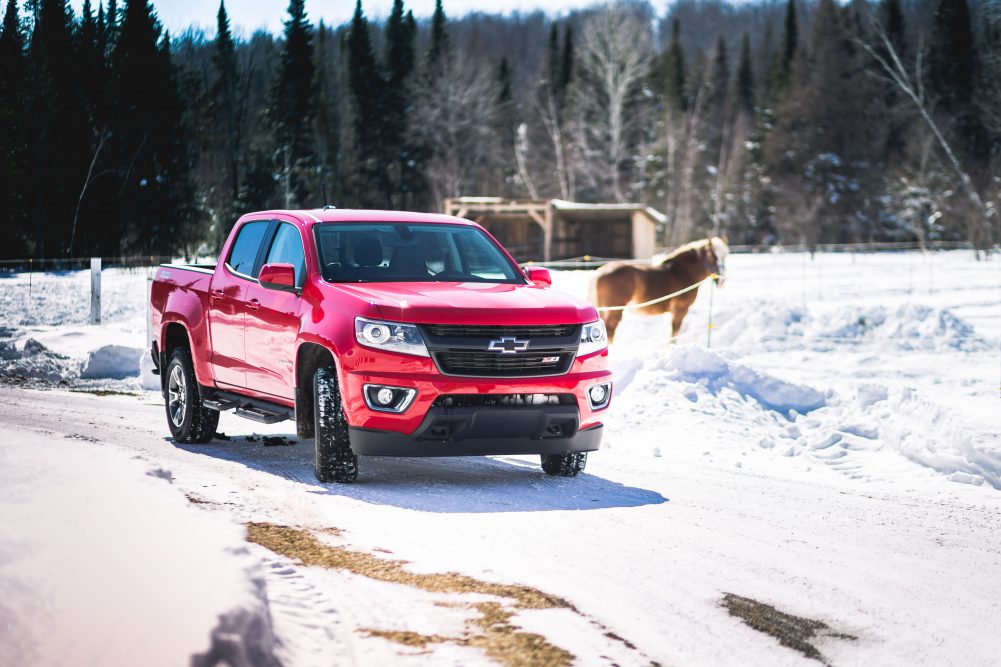 And what a good-looking little truck, don’t you find? I love how the front end resembles a mini, more infant-like Silverado. Also, Chevrolet has given it bulging rear fenders, giving the Colorado a wider appearance, while evoking the iconic “step-side” look of sports trucks from the past. My tester, dressed up in Z71, mostly an aesthetic package, and painted in the Red Hot paint job, sure looks the part and attracted a lot of positive attention everywhere I went. Medium-sized trucks have a lot of appeal, and one of the reasons people are so in love with them is that they tend to look more playful and toy-like than their larger counterparts, while being almost equally utilitarian. Where the Ridgeline resembles a Pilot SUV with a box grafted onto its rear, the Colorado, very much like the Toyota Tacoma, actually looks like it’s ready to start hauling something fun like dirt bikes or some sort of dune-buggy. This is the manliest looking small truck out there.

The Stats That Matter 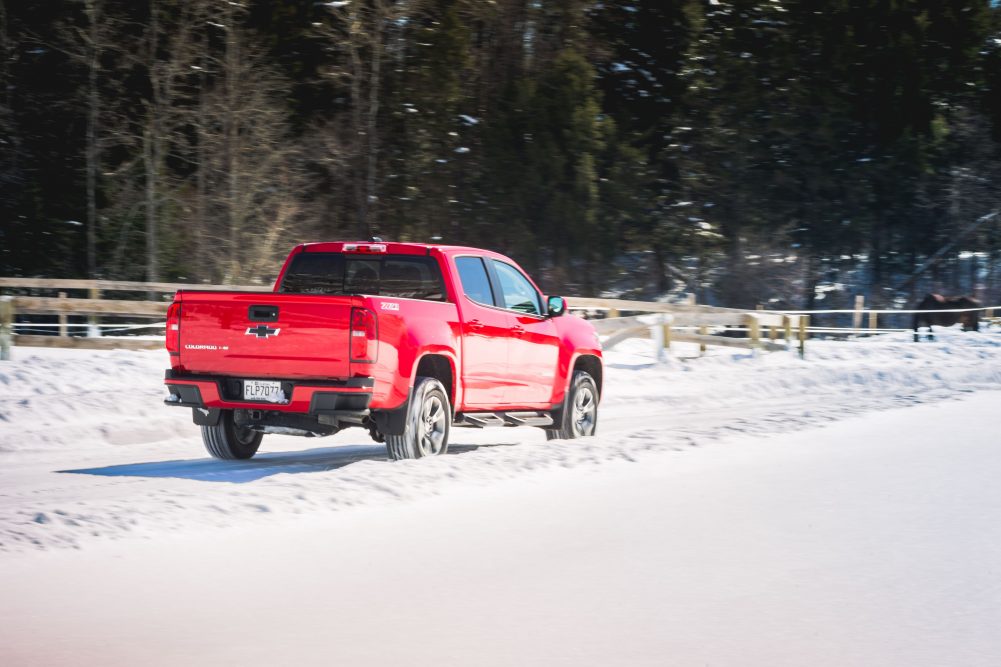 Mind you, the Colorado really is a proper truck in the areas that matter, that is, if we were to follow the textbook definition of what a truck should be. Unlike the unibody, front-wheel-drive biased Honda, the Colorado’s body rides on an actual frame, like trucks from the old days, helping it tackle the really hard stuff we expect from such vehicles. In fact, when equipped with the optional trailer package, this Chevrolet boasts the highest available towing capacity in the segment at 7 000 pounds, and the highest payload capacity at 1 580 lb. Those are impressive numbers for its size, knocking at the door of larger, more powerful full-size pickups who typically house V8 engines. 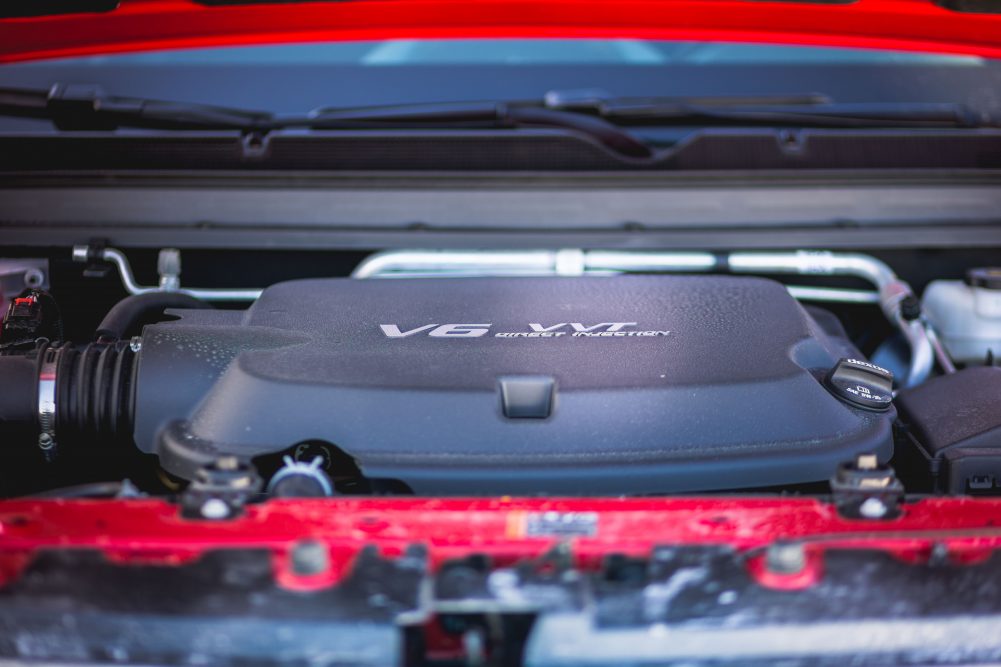 Chevrolet understands that the truck market is a rapidly evolving one, so quick changes were made to the Colorado’s drivetrain for 2017 to keep it competitive. That, or maybe GM didn’t appreciate that a Honda was out-performing their mid-size truck. In V6 trim, such as my tester, the Colorado inherits GM’s 3.6-liter V6, the same one I sampled in the GMC Acadia and Buick Lacrosse. Power figures remain identical in this application at a claimed 306 horsepower and 275 lb-ft of torque. With a 28 horsepower and 13 lb-ft advantage over the Honda, this puts the Colorado ahead of the pack in the power department. 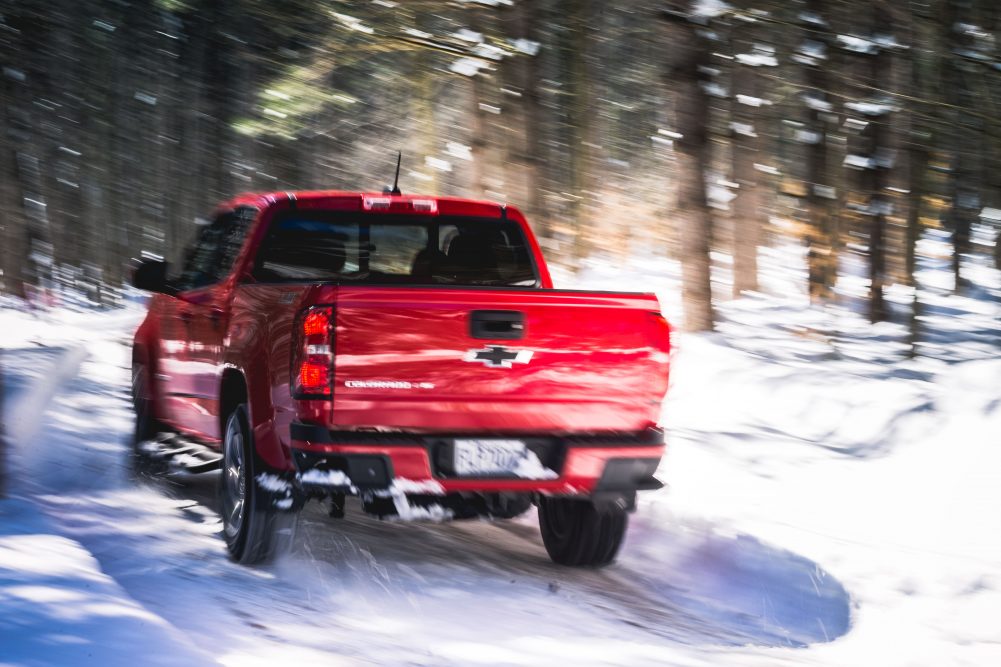 That power is sent to the rear, of course, being a “real” truck and all, or all four wheels via an all new Hydra-Matic 8-speed automatic, built in-house by General Motors. Together, this drivetrain combination helps move the 2 037 kg light-grade pickup from a standstill to 100 km/h in 6.1 seconds, a full half second ahead of the Ridgeline. While not as racy as Honda’s VTEC engine, and certainly not as sonorous, GM’s corporate 3.6-liter remains one of my favorites in the industry due to its ability to deliver smooth and constant power throughout the entire rev range, and a willingness to rev all the way to its redline.

The 8-speed automatic is also brilliant, as is the case with most GM automatics of late, providing quick and smooth upshifts, and an ability to constantly keep the engine’s rpm in the torque sweet spot. The Colorado also has another ace up its sleeve over the Honda: its 4×4 system can be fully disengaged to power only the rear wheels. While the Honda featured pre-selectable driving modes depending on the type of terrain it would encounter, the Colorado offers both a 4×4 high and a 4×4 low feature, the old-school way of doing traction management. 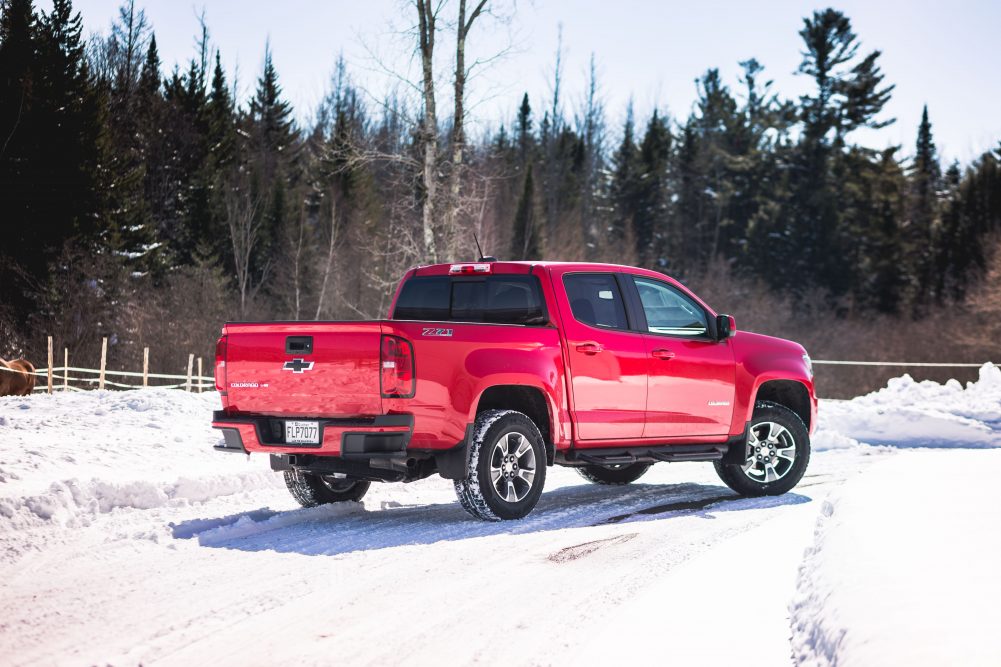 On the road, the 2017 Chevrolet Colorado exhibits road manners that are typical of a body-on-frame pickup, meaning it’s not as engaging to drive, or nimble as the car-based Honda, but equally impressive in its own right.

As expected, body motions are present, and the entire vehicle wallows about when driving over road imperfections, with occasional tire slap here and there due to a solid axle with a multi-leaf spring rear suspension. What the Colorado loses in handling, it makes up in ride quality by being a smooth and quiet operator, feeling much more refined than its price tag suggests. Wind and tire roll are kept low, and the overall cabin noise is much quieter than in the Ridgeline. Brakes are also easy to modulate under normal driving conditions, and although the electric power steering is light, it properly communicates what the front wheels are doing. 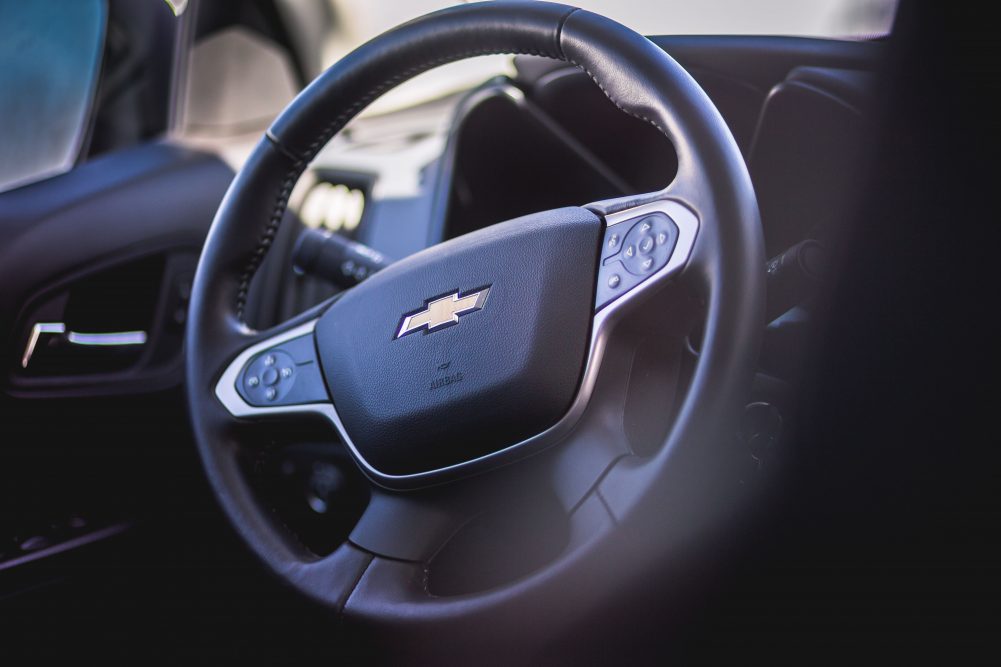 Inside, the Colorado’s cabin is well appointed, functional, and supremely comfortable. There’s as much room in there as in an Impala midsize sedan, and the narrow body contributes to a very car-like experience. With supportive front seats and ample rear head and legroom for adults, this is a great cabin to spend some time in. 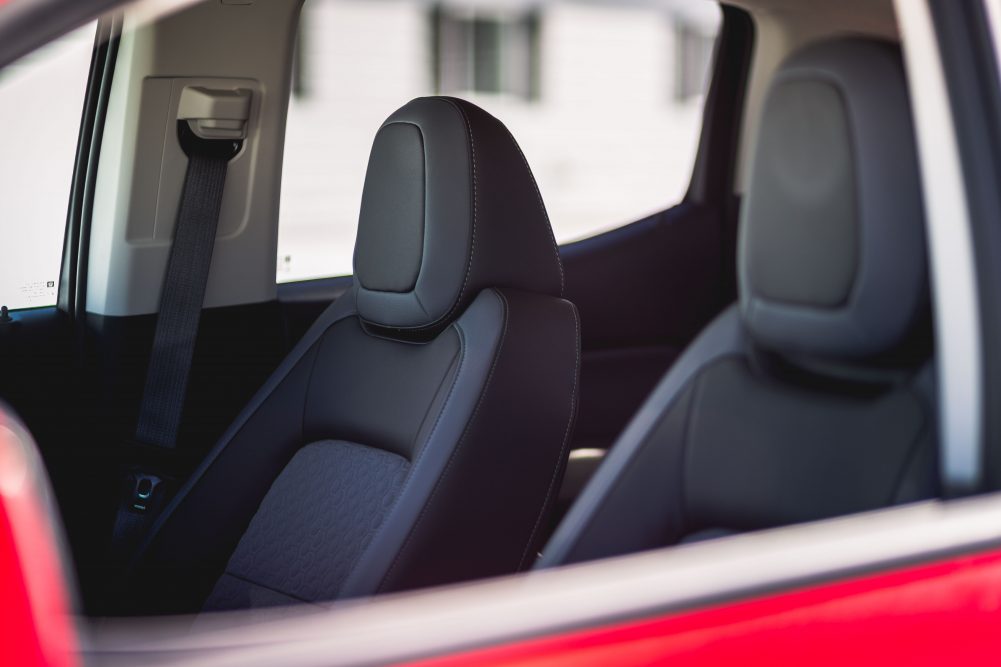 Unfortunately, the Colorado can’t match the Ridgeline’s storage and packaging solutions, as its cubbies and storage compartments are smaller and less abundant than in its Japanese rival. The Colorado isn’t equipped with a trunk in its bed liner like the Honda, but still offers the possibility of raising the rear seats upright for added cargo space – a handy feature if you need to fit a large dog or a bicycle back there. 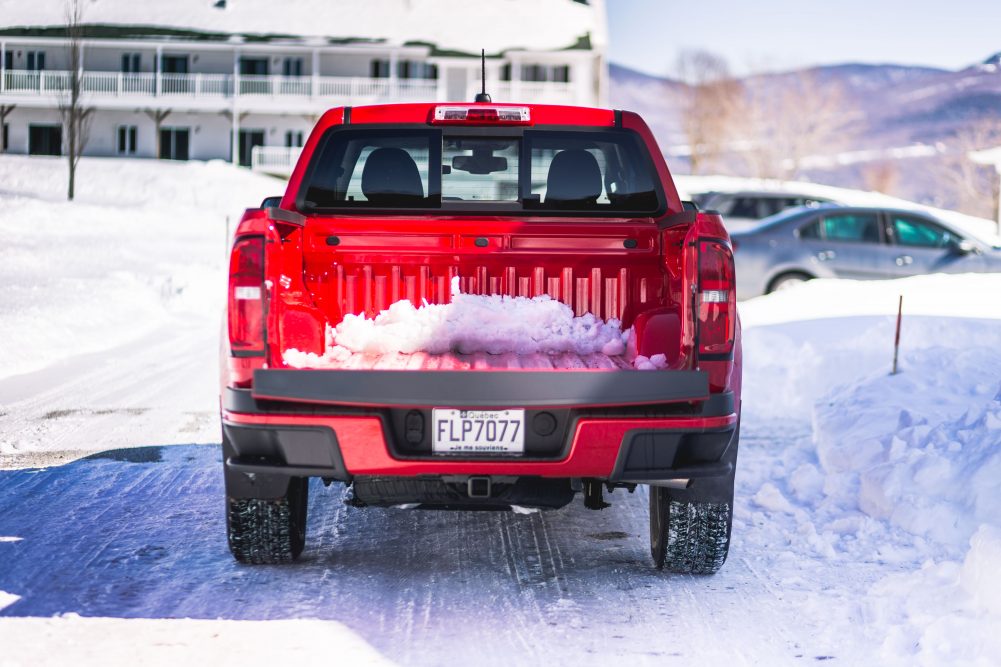 Overall controls in the Colorado are simple to use, with large knobs and buttons that can be operated while wearing gloves. I’m a particular fan of the toggle switches located on the centre console for removing traction control or activating other driving assist features. 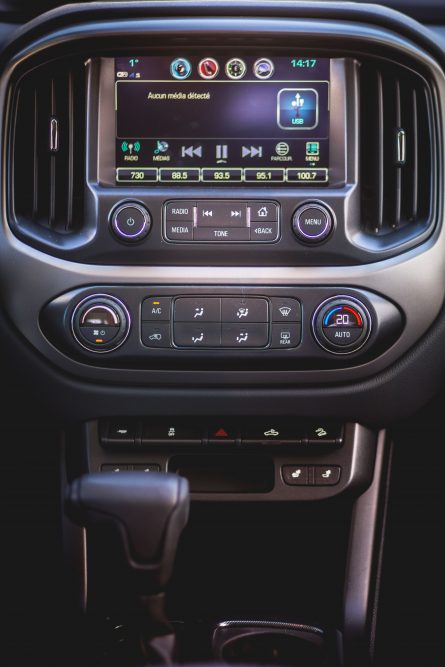 Chevrolet’s Mylink infotainment system remains the benchmark as far as touch-operated interfaces go, and although overall ergonomics are decent, GM’s largest flaw remains the inconsistency of its control placement throughout its model line, unlike Honda’s cars and trucks which feel instantly familiar from one model to another. The Colorado is probably the worst in GM’s lineup to be plagued with this problem, since it borrows gauges and switch-gear from other Chevrolet vehicles. There’s no hiding the fact that this is a GM parts bin special.

Punching Above Its Weight

Pricing for the 2017 Chevrolet Colorado starts off at $29 360 for a two-wheel-drive, four-cylinder crew cab. Opt for the fully loaded Z71, extended cab 4×4 model like my tester, with the standard bed, and pricing jumps to a not-so-cheap $40 595, but still significantly more affordable than a similarly equipped Honda Ridgeline and on par with the Toyota Tacoma.

But don’t forget Nissan will sell you a more rudimentary, but bulletproof Frontier for less money. 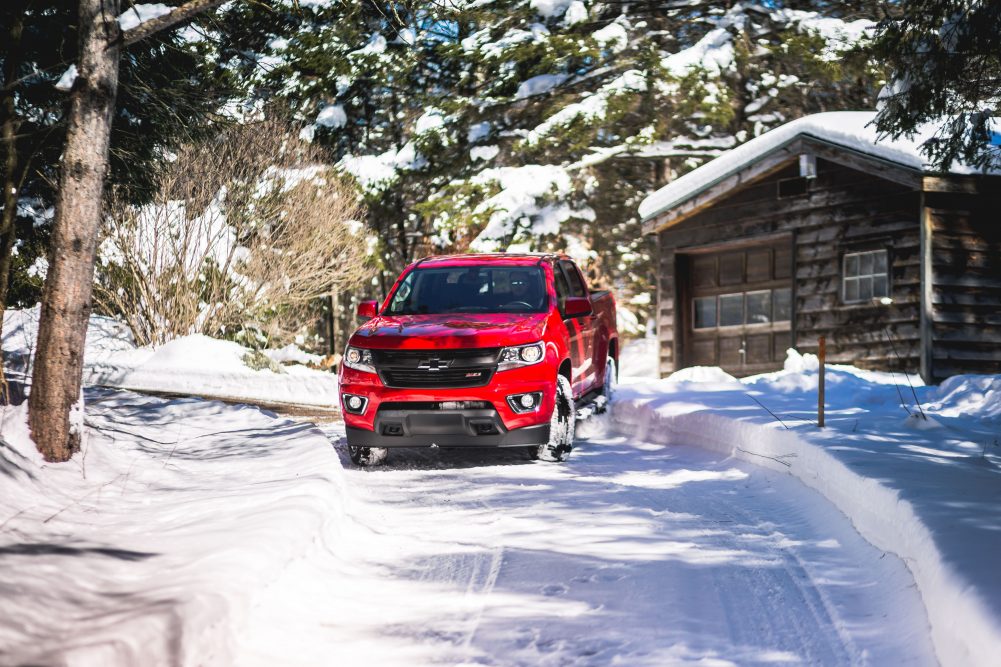 The great thing about the Colorado however, is that it can be had in a variety of bed and cab configurations. Chevrolet will even sell you one with a 2.8-liter turbo-diesel four that churns out a claimed 369 lb-ft of torque and boosts towing capacity to 7 600 pounds. No other competitors in the segment offer a diesel option. 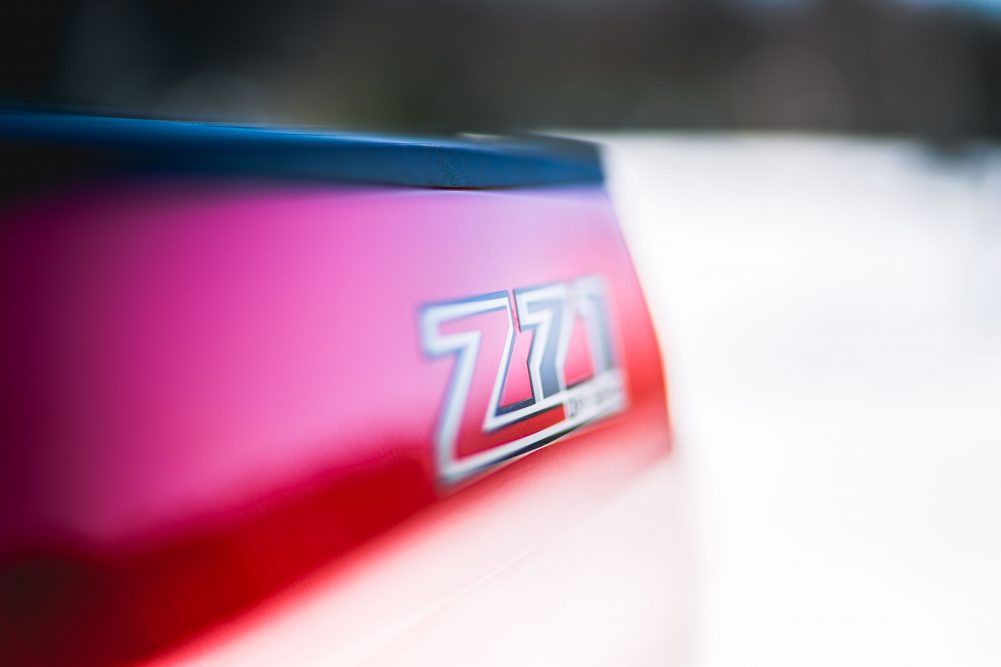 At the end of the day, you can’t deny the amount of truck you’re getting with the Chevy Colorado. The price may seem up there for a medium-sized truck, but don’t look at it as a posh sissy truck, but consider it more like a full-sized pickup for those on a budget. Because there’s a lot of brawn coming out of that cute little face. That being said, with the return of the Ford Ranger next year, the mid-size truck segment is now hotter than ever, and each contender has something truly unique to offer. In Chevrolet’s case, it’s giving the consumer the most utility for the money, a formula which has never gone wrong in the truck world. If there’s one thing the General knows how to market, it’s trucks, and with this updated Colorado, it doesn’t seem at all intimidated by the next wave of aggressive contenders it’s about to take on.

Review of the 2017 Chevrolet Colorado Z71 by William Clavey

+
+ Attractive exterior design.
+ Offers the most power and utility in the segment.
+ Big truck character in a small body.