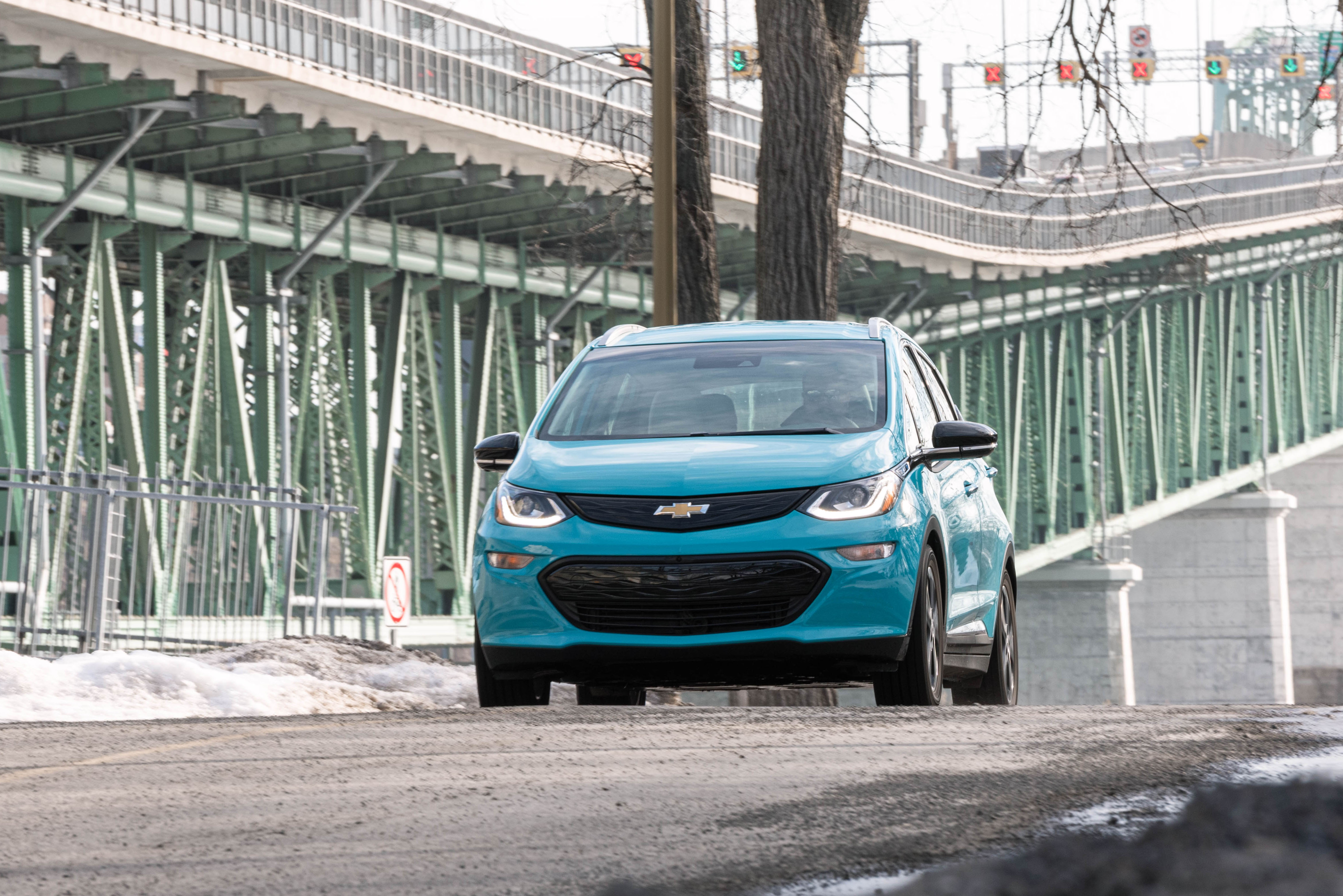 When General Motors announced the 2020 Chevrolet Bolt EV was getting an all-new 66 kWh battery, promising more range and better performance in the cold, I was genuinely excited. Remember, last year, I took the Bolt out during a rough Canadian winter and came to the conclusion that although it loses almost half its range in the cold, the little Chevy is still a fantastic year-round electric car. Curious to see how this new one fares, I did the exact same thing with it. 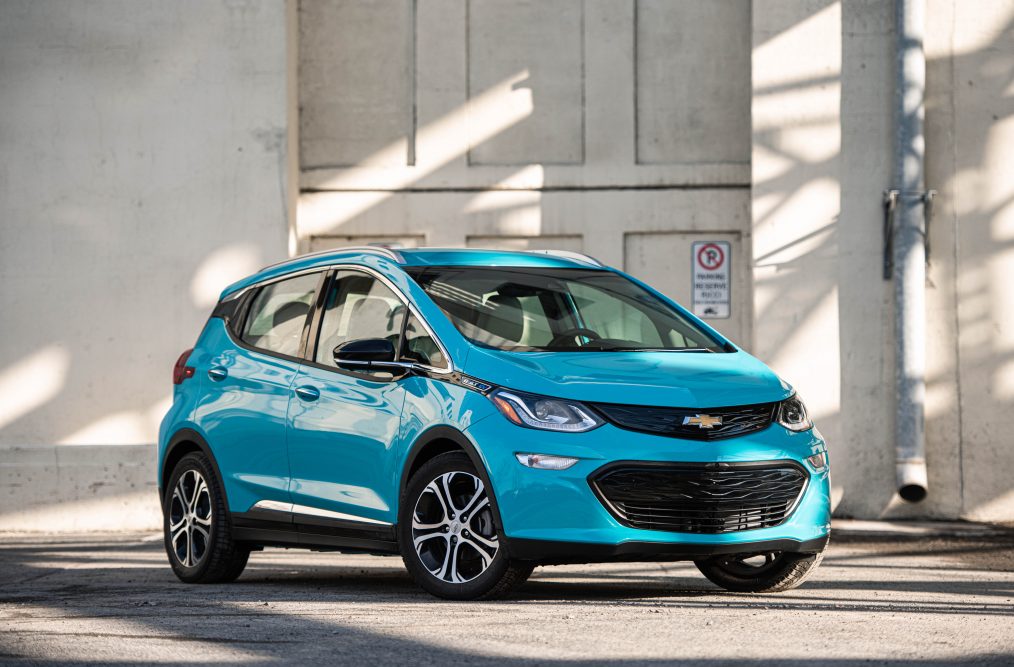 The color you see here, Oasis Blue, is also all-new for the 2020 Chevrolet Bolt EV, along with Cayenne Orange Metallic. The funky Shock Yellow hue from last year was removed from the lineup along with Green Mist Metallic. Other changes include a very mild refresh of the car’s front end by way of a new weave pattern in the fake grille as well as a new 360 backup camera. The rest, for better or worse, is exactly the same as when the car was first released back in 2017. 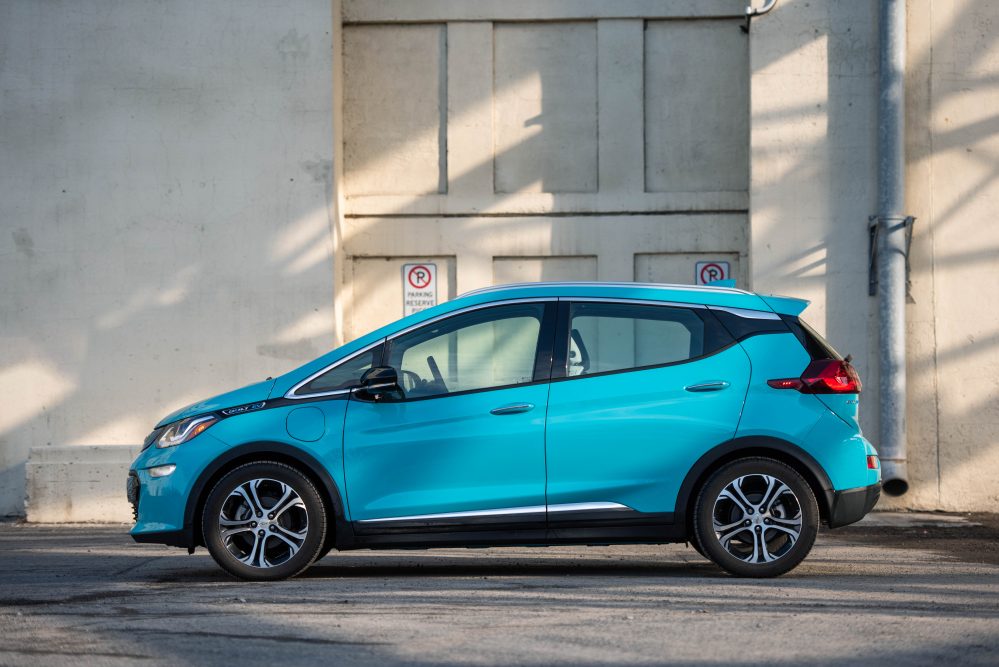 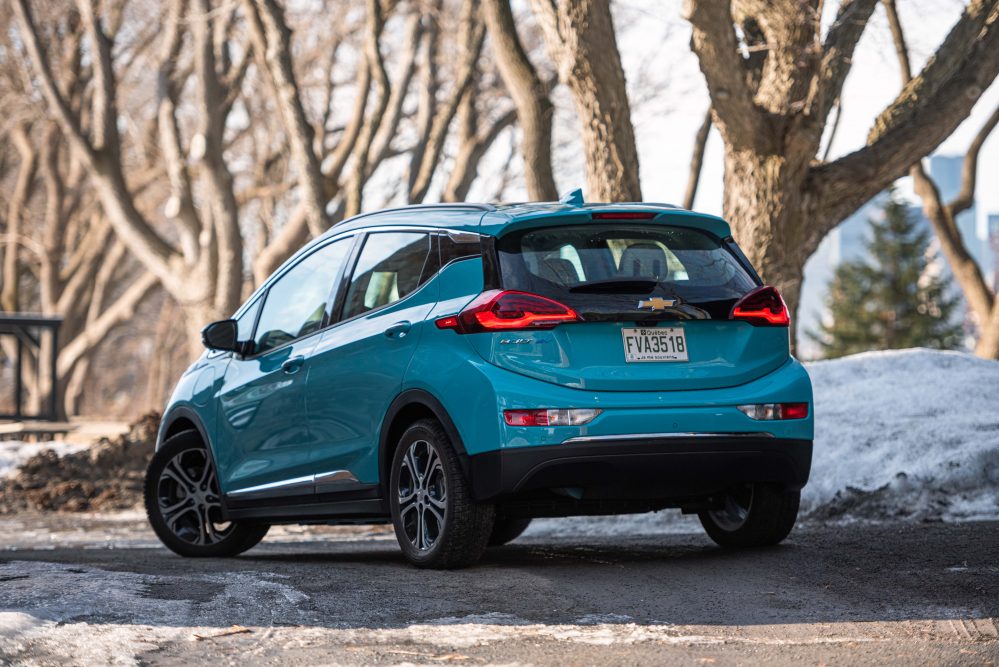 Power remains unchanged at 200 horsepower and 266 lb-ft of torque, with front-wheel-drive being the only way to put the power down. Acceleration from 0 to 100 km/h is rated by Chevrolet at a very respectable 6.5 secondes, or not far behind a Honda Civic Si or Volkswagen Golf GTI. 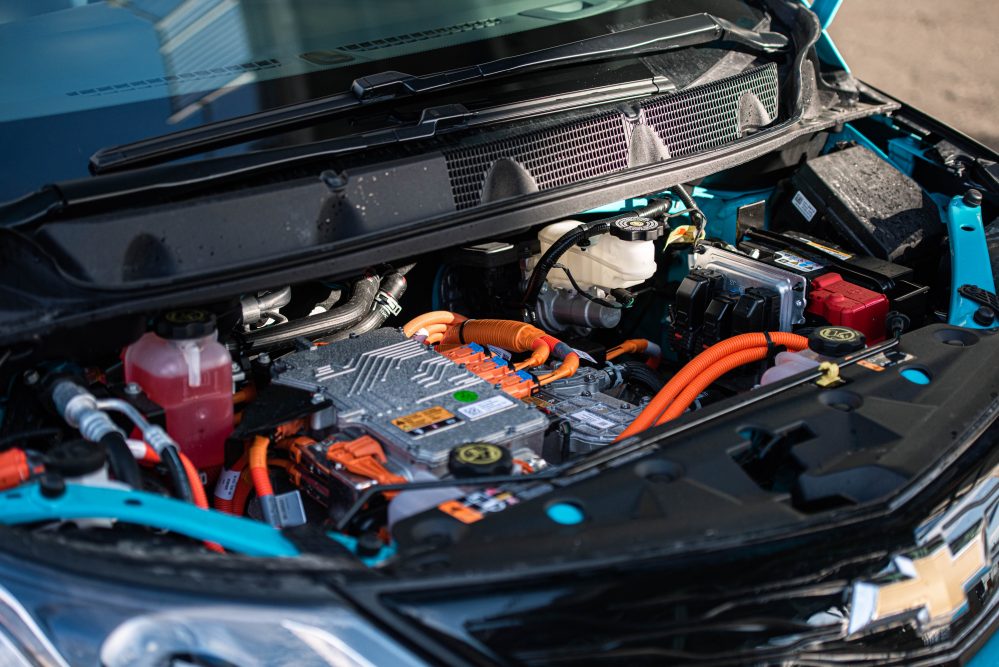 Pricing kicks off at $44,998 before applicable incentives. In Canada, the Bolt EV is immediately eligible to a $5,000 federal rebate, while in Québec, an extra $8,000 can be added on, for a $13,000 reduction on the car’s final price, turning it into one hell of a bargain considering you’ll never pay for gasoline again. 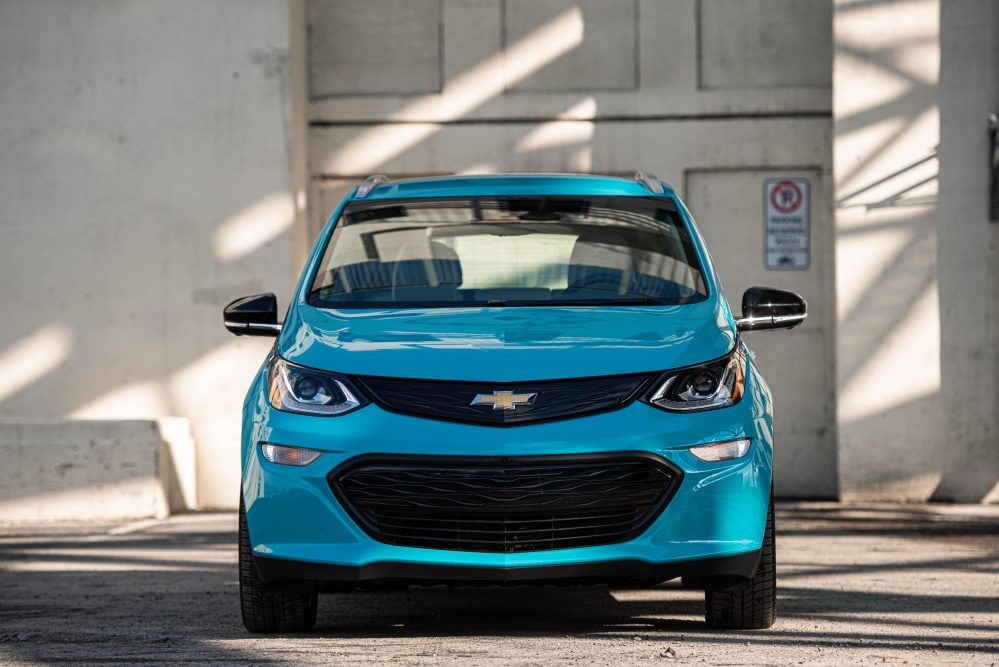 My tester was the not-so-cheap Bolt EV Premier, which kicks off $50,298, adding leather seating surfaces, 17-inch Ultra-Bright machined aluminum wheels, roof-mounted side rails and that aforementioned 360-degree Surround View Camera. The car you see in these pictures had a $795 Driver Confidence II package which adds a slew of semi-autonomous safety technology. Honestly, I’d stick with the entry level car as it’s hard to justify paying 50 grand for a a dinky urban commuter such as this.

So, How Does It Fare? 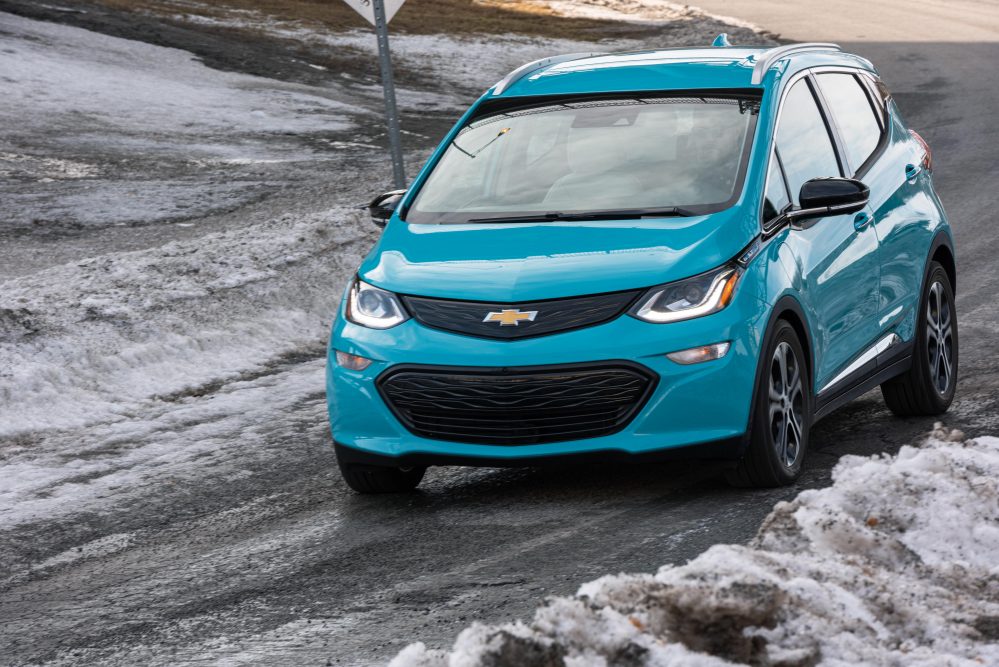 Before I go into what I did with the 2020 Chevrolet Bolt EV to test its new battery out in the cold, I will say that GM has done nothing to change the car’s interior, which is still the car’s most noteworthy and only disappointment. 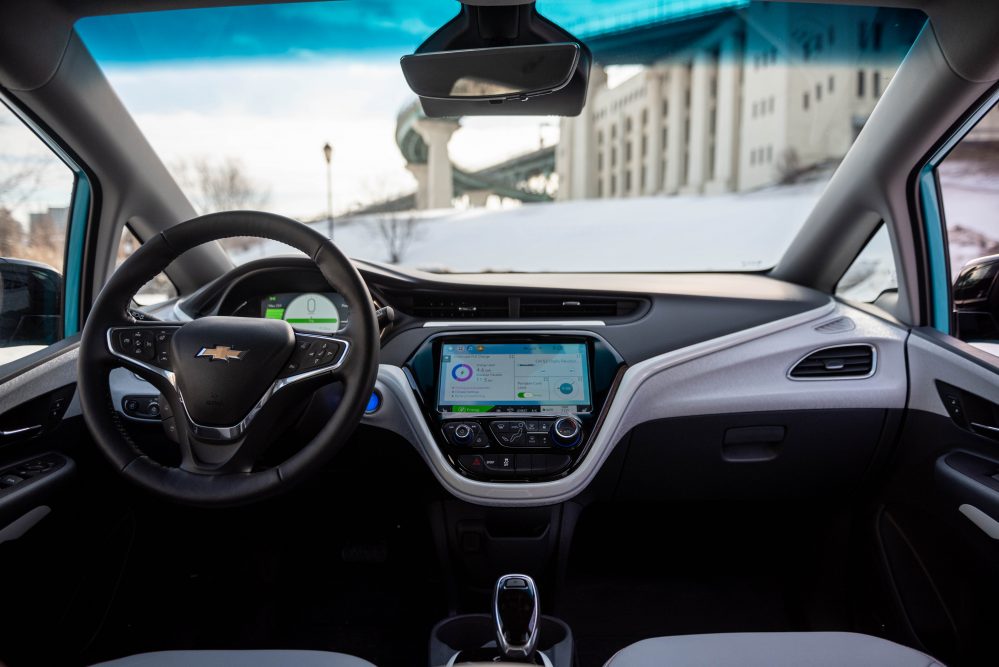 I love the Bolt for its peppy acceleration, surprisingly agile handling and enormous cargo capacity. This thing will engulf up to 1,602 liters of your gear once the rear seats are folded flat. That kills all its rivals, the Nissan LEAF (849 liters), the Hyundai Kona Electric (1,296 liters) and the Kia Niro EV (1,543 liters). It’s also really roomy in there thanks to a high roof line and a rear bench that provides a surprisingly large amount of leg and headroom. 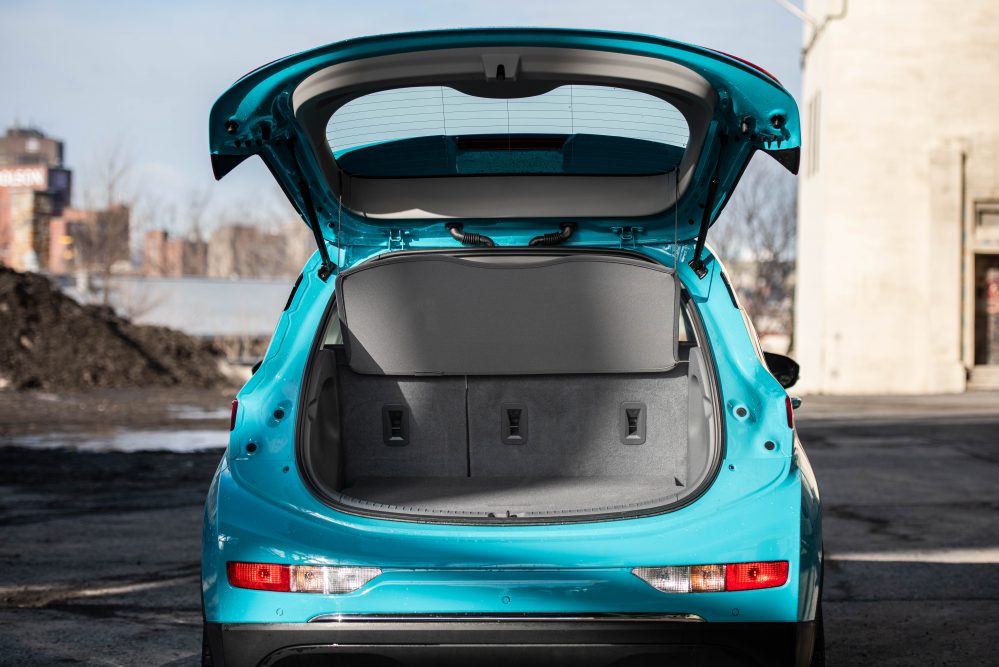 But that interior needs a major overhaul because material quality and overall fit and finish is comparable to a sub-$20,000 car. At fifty grand, hard plastics, hard seats and flimsy trunk components are simply unacceptable. Did I mention how hard and uncomfortable those seats are? They’re awful. 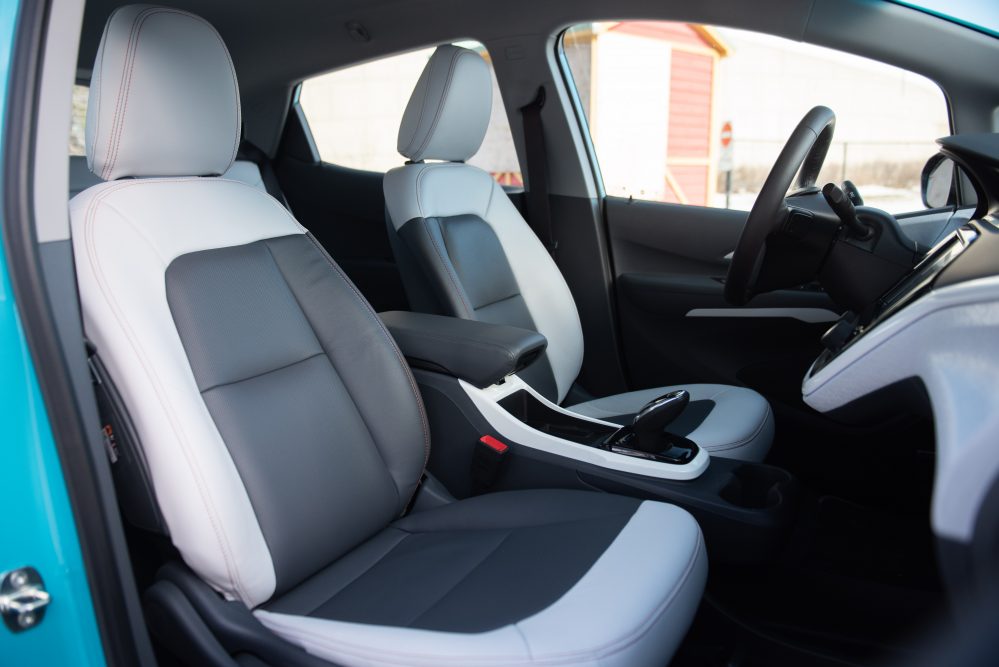 That said, I do appreciate the Bolt’s infotainment system. Like most of General Motors’ interfaces, it’s a quick to react and downright straight forward layout that doesn’t distract you too much while you drive. All information is clear, and finding basic commands is frankly straight forward. 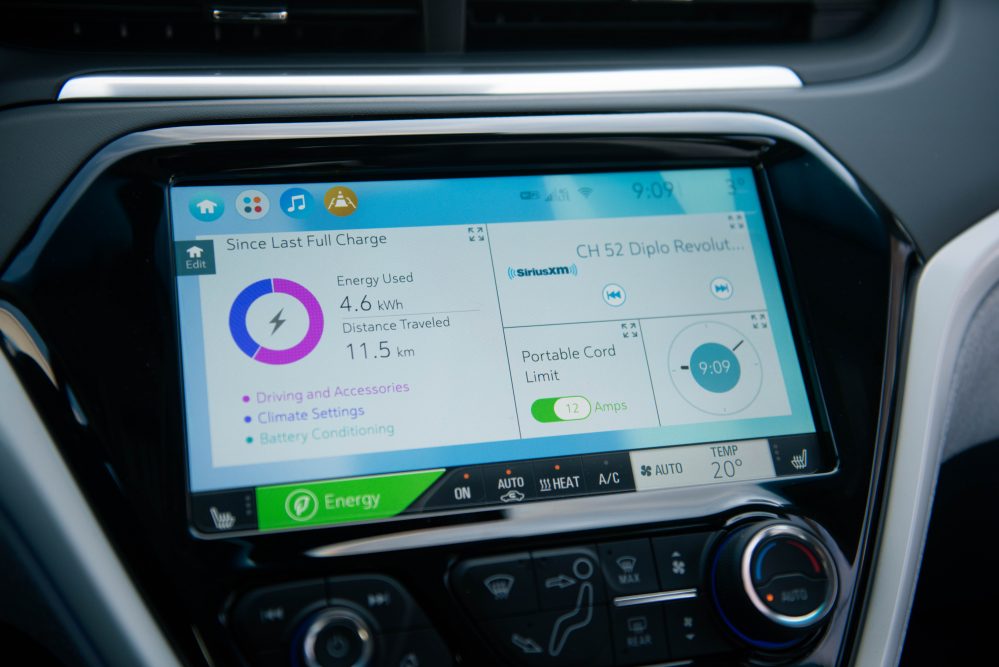 However, it’s a tad more cluttered than what you get in all other Chevrolet vehicles due to added graphs and information related to your charging cycles and energy consumption. Some are more useful than others. Unlike its Korean rivals, the Bolt doesn’t get a winter mode to improve its battery performance and charge cycles in the cold. 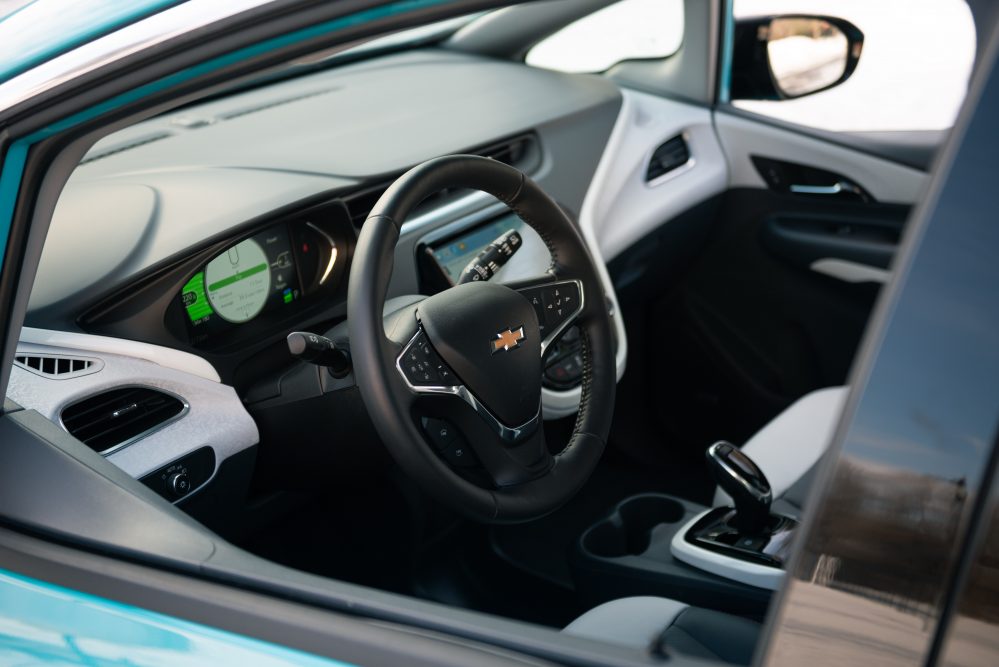 It’s also impossible to reset the car’s GOM – the onboard computer that predicts your range. So you’re stuck with what the car estimates you’ll do based on outdoor temperature and past driving habits. So if you floor your Bolt EV all the time, something you’ll probably do because it’s so fun to drive, it’ll most likely never show you its maximum range potential. 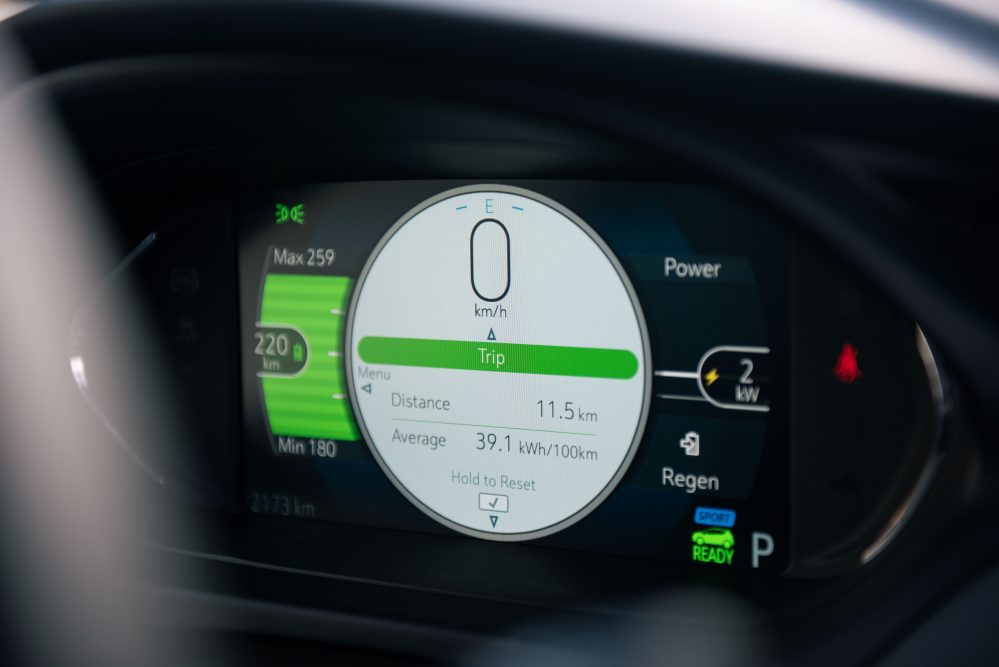 So, speaking of GOM, see that picture up there showing “Max 259”? That’s actually the amount of range the 2020 Chevrolet Bolt EV gave me after a nine hour charge on a level 2 (240 volt) charger. Average outdoor temperature ranged between 0 to 5 degrees Celsius. This is 150 km less than what GM advertises, and not much better than the last model I drove in even colder temperatures. 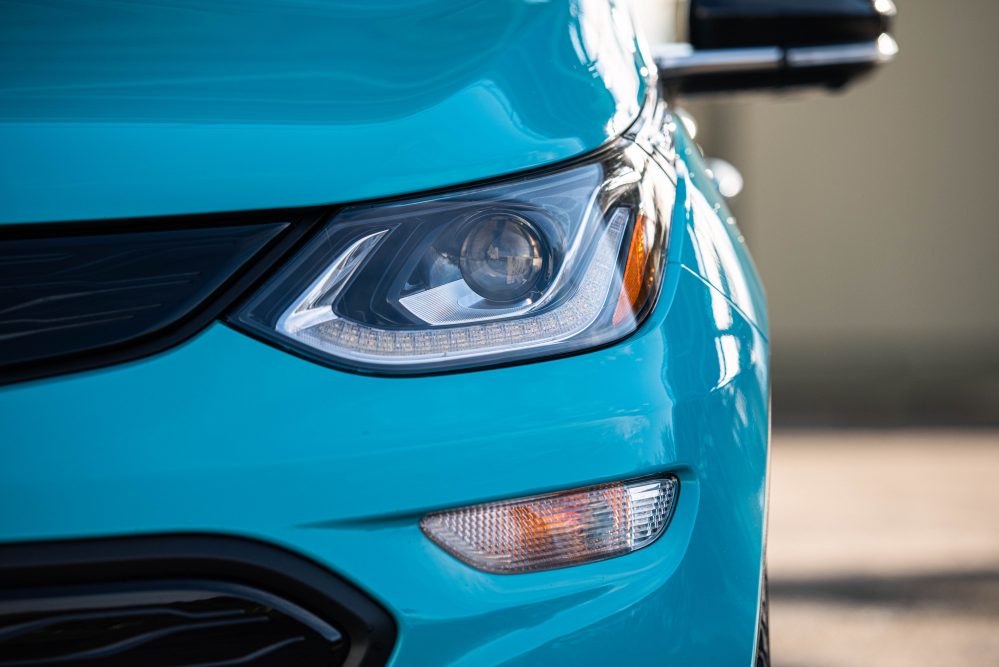 But I didn’t let that onboard computer ruin my plans. I set out on a 200-km trek including both urban and highway driving to test out the car’s actual range. And since I drive EVs the same way I drive an ICE vehicle, which means with the heater on, heated seats activated and actually driving at the same pace as everyone else on the highway, I did precisely that in the Bolt EV. 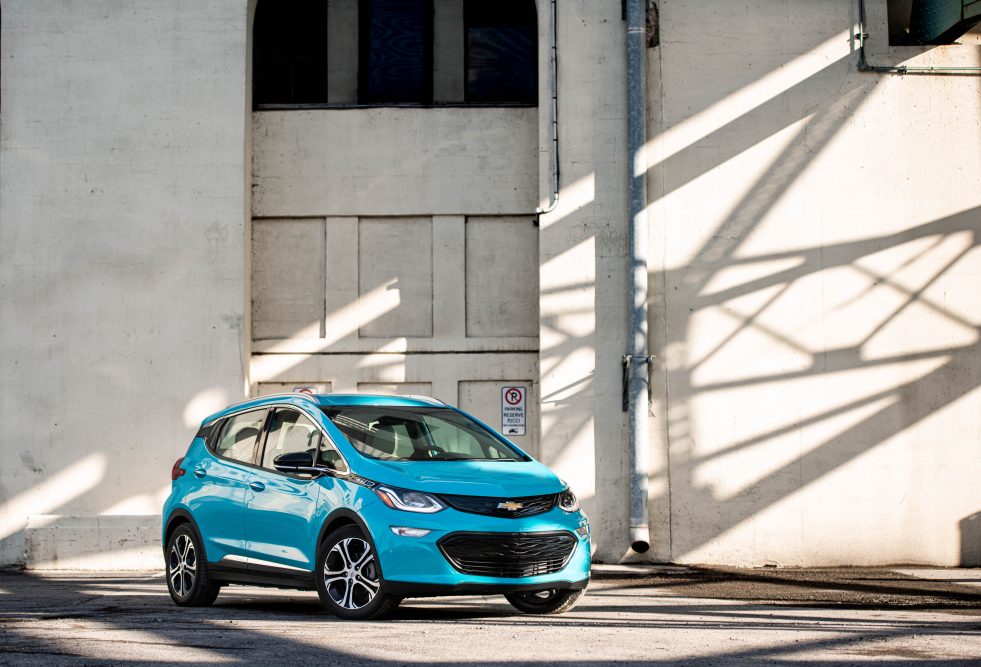 I gotta say, this car is a hell of a lot of fun to flog around on a twisty bit of road. Its chassis is rock solid, even though it feels flimsy from the inside. It soaks up road imperfections the way an expensive car would and because most of the car’s mass is concentrated to the center of the car due to its floor-mounted batteries, the Bolt EV is stable at high speeds, well grounded and very neutral during hard driving. 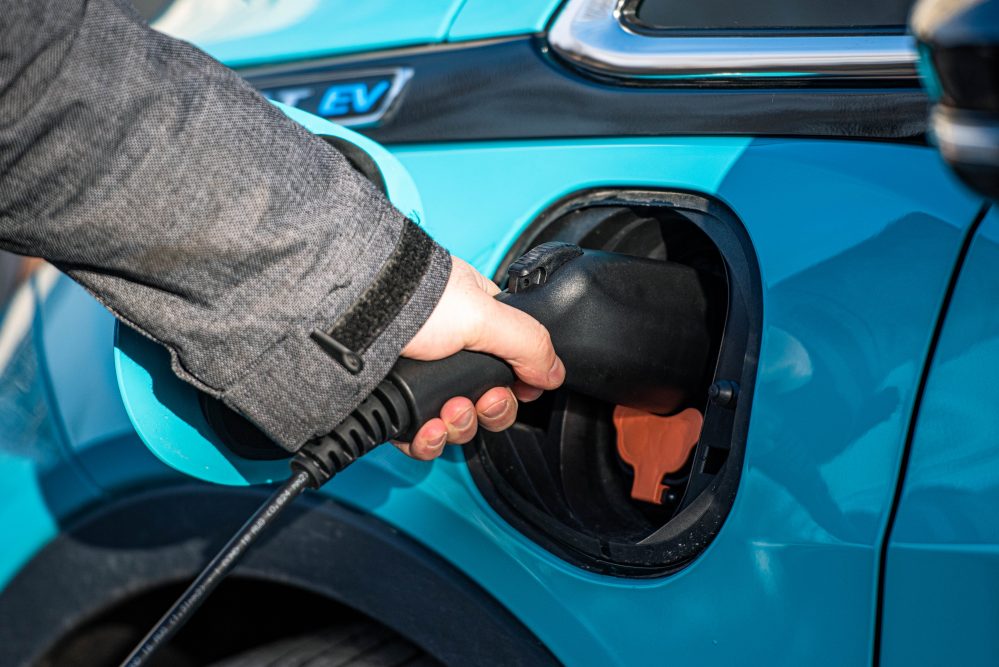 During my trip, I even made sure to maximize the car’s regenerative braking system by using the clever L function on the transmission, and the tiny paddle shifter located on the steering wheel. It provides enough braking resistance to actually drive the car with one foot, which is rather cool. 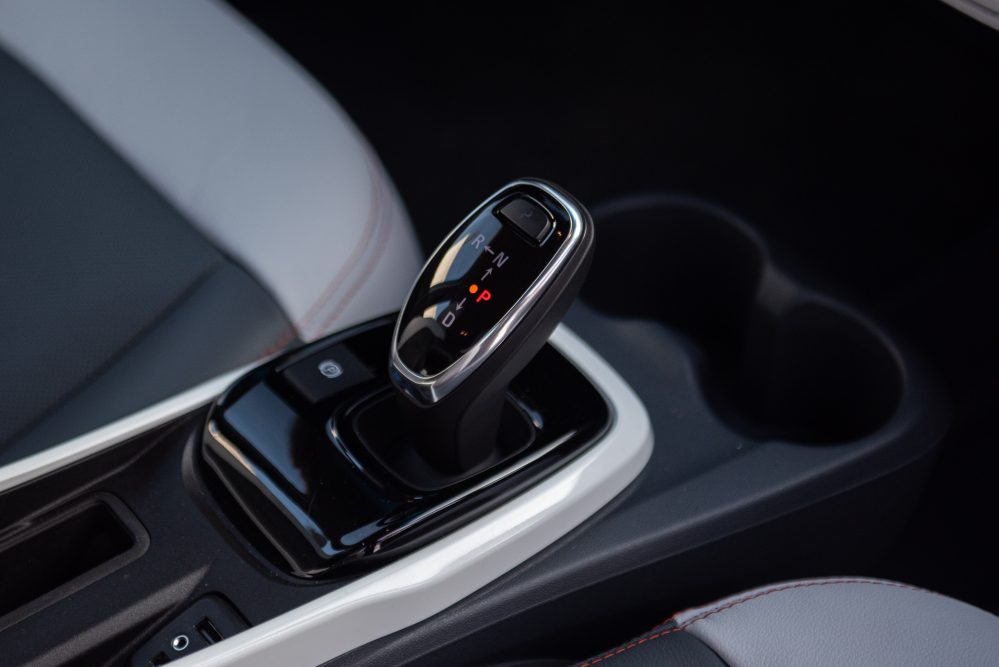 Turns out I couldn’t do much more than 260 km on a full charge. I actually tried the same route on my return home, and the results were identical which forces me to conclude that all electric cars powered by a 60 to 66 kWh battery aren’t able to do more than 300 km at best during the winter months. Prove me wrong in the comments. If you drive with no heater on, it doesn’t count. I want actual winter tests. 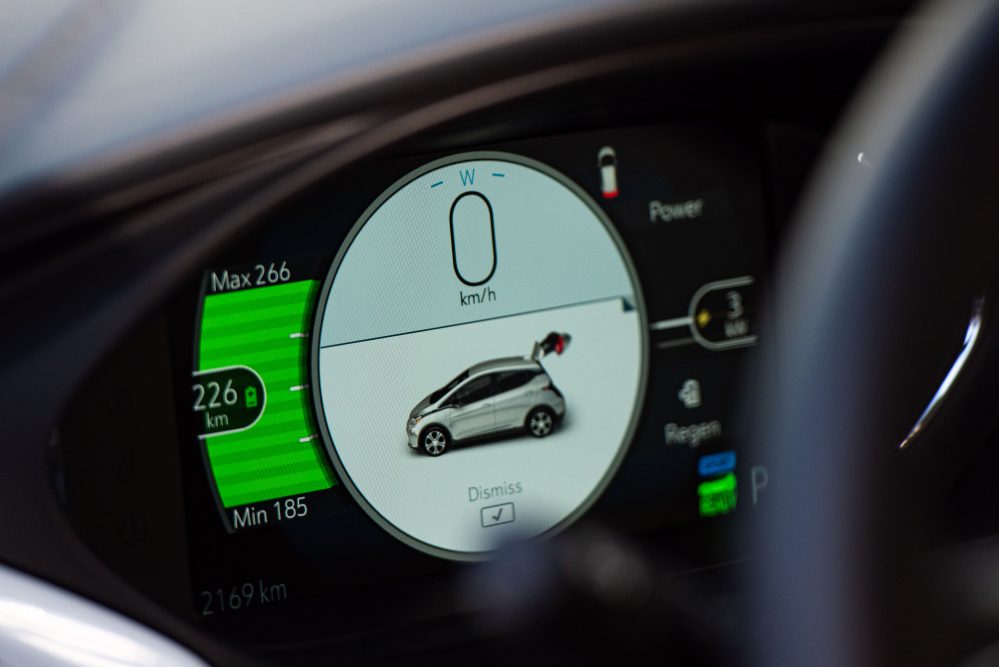 Still, that’s more than the average commuter will do during an average week, which is why I continue to believe the Chevrolet Bolt EV remains one of the cleverest electric cars currently on sale. It’s cheaper than a Tesla, cheaper even than one of its main rivals, the Kia Niro EV. And it’s proven to being quite reliable so far, unlike Tesla, which is plagued with reliability issues as I write this. 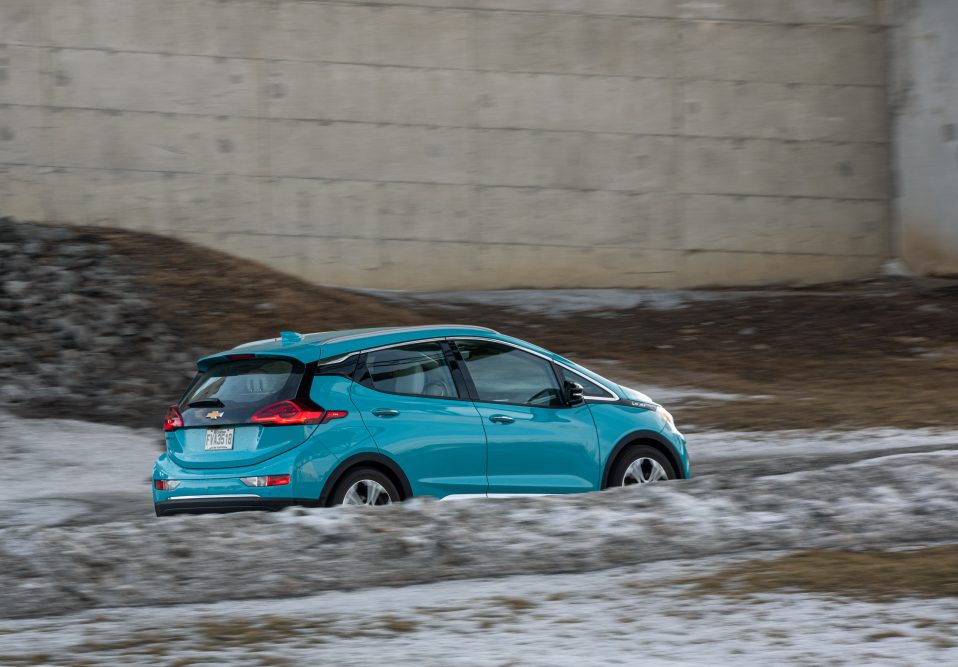 That said, with an updated Bolt heading our way for the 2021 model year, promising an a new front fascia, and a much needed redesigned interior (same battery), I suggest waiting a little longer to get that one. Let’s hope pricing will remain the same though. If not, you’ll at least be able to get a good rebate on this one.