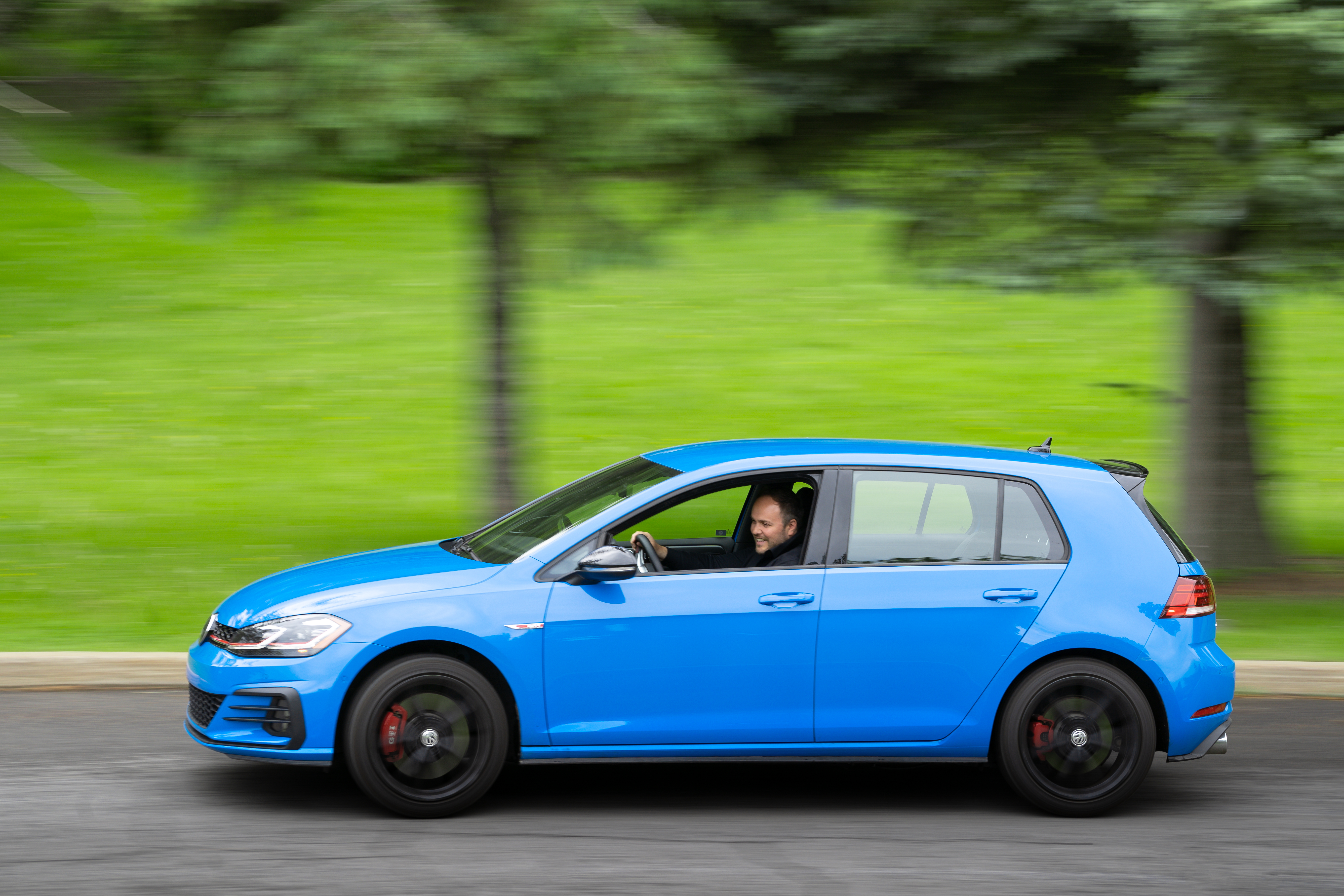 Look, I’m a sucker for the current MK7 2019 Volkswagen Golf GTI, and I’m not hiding it. Heck, I’m in love with all variations of the Golf. I totally dig the Golf R and I was charmed by the all-electric e-Golf.

Perhaps it has something to do with me growing up in the nineties, tuning Volkswagens, Hondas and other sport compact cars. But the current GTI has always held a special place in my heart. Now, though, it’s about to leave us, which makes me sad. Also, Volkswagen is talking of killing the entire Golf lineup in North America all together due to the onslaught of SUV’s. If that were to happen, it would be a tragedy.

Here’s why you should care more about this car. No matter what I drive, weather it be a McLaren, an expensive Mercedes-Benz, an Aston Martin or even a Ford Mustang Bullitt, each time I get back in a GTI, I feel right back at home. So when Volkswagen Canada threw me the keys to yet another one to review, I just couldn’t say no. 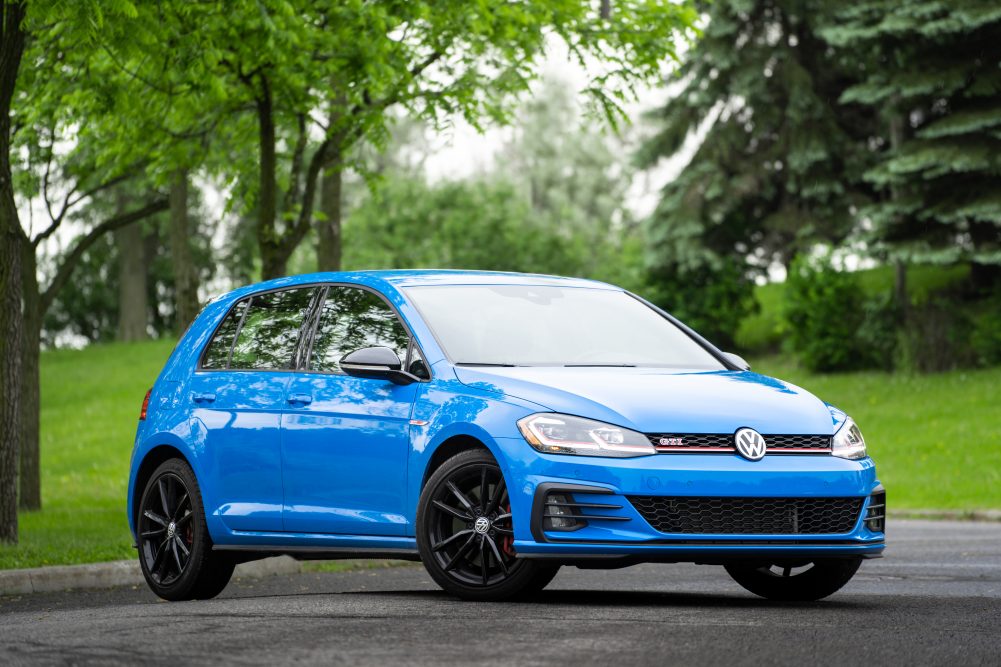 The car you see here is the 2019 Volkswagen Golf GTI Rabbit, a last hurrah, if you will, for the seventh-generation Golf GTI before it’s replaced by the eighth generation car next year. The Rabbit sits between the standard GTI and the Autobahn model, selling for an entry price of $33,995.

What you get is mostly an aesthetics package which comes standard with that beautiful shade of Cornflower Blue. The Rabbit also gets blacked-out wheels, mirrors, rear spoiler, and a cute little red rabbit logo on its hatch. In terms of equipment, it gets Volkswagen’s Dynamic Chassis Control, which allows you to select between Comfort, Sport and Eco modes. There’s an upgraded Fender sound system, LED headlights and yes, plaid cloth seats. Would you get your GTI in any other way? 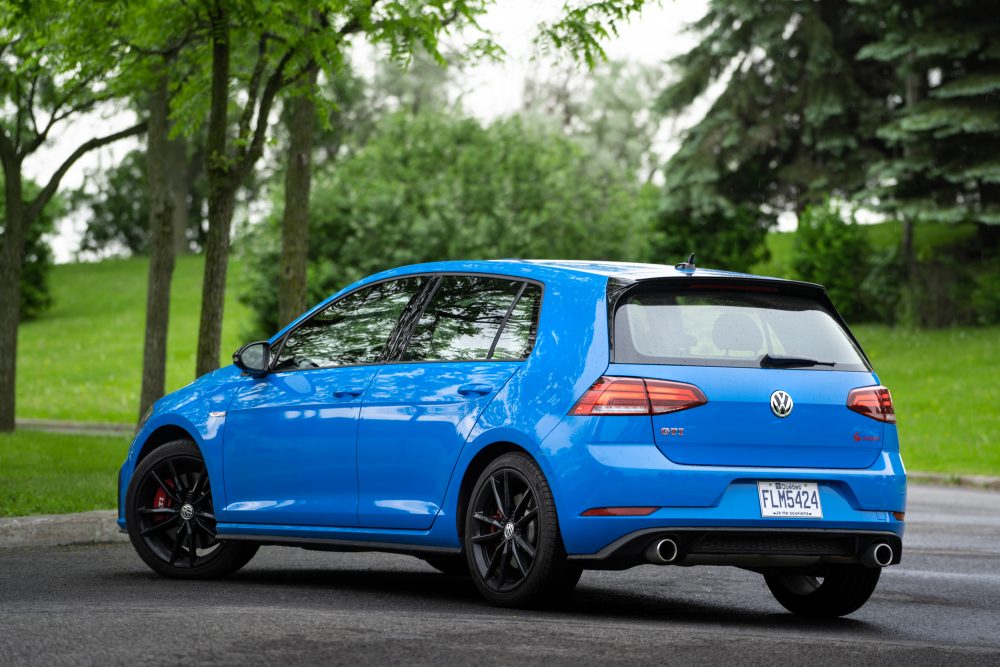 The entire Golf lineup received a minor facelift last year with updates to the interior as well, so the 2019 Volkswagen Golf GTI remains virtually unchanged. It also keeps the traditional analog gauges, unlike the Golf R which has now gone full digital. 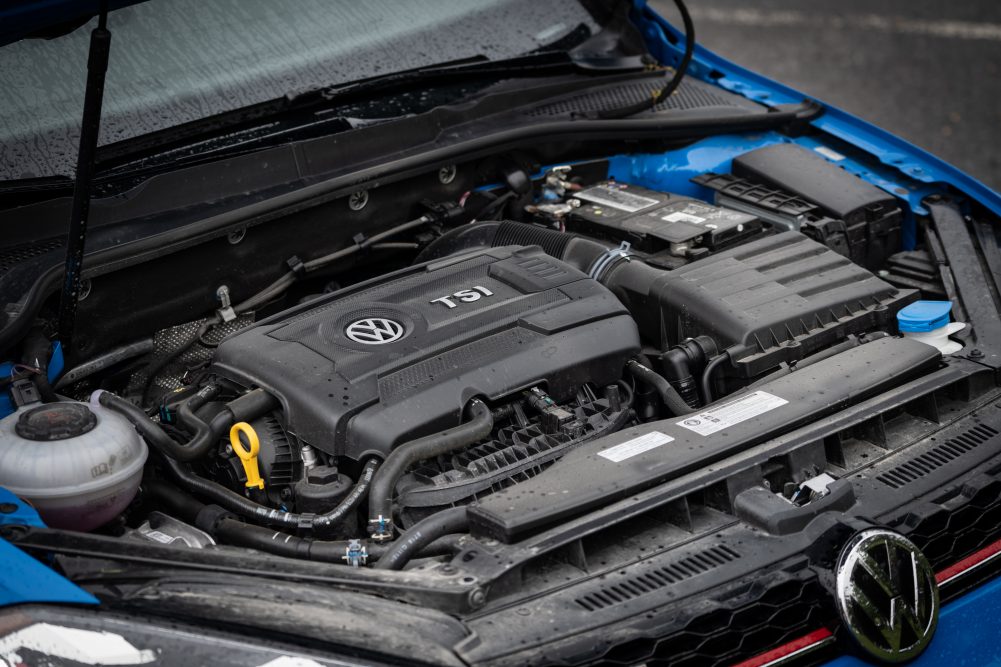 Unfortunately, since all Volkswagen press units in the province of Quebec come solely with automatic transmissions, my tester was fitted with the latter. If it were up to me all variants of the Golf would be equipped with a stick. 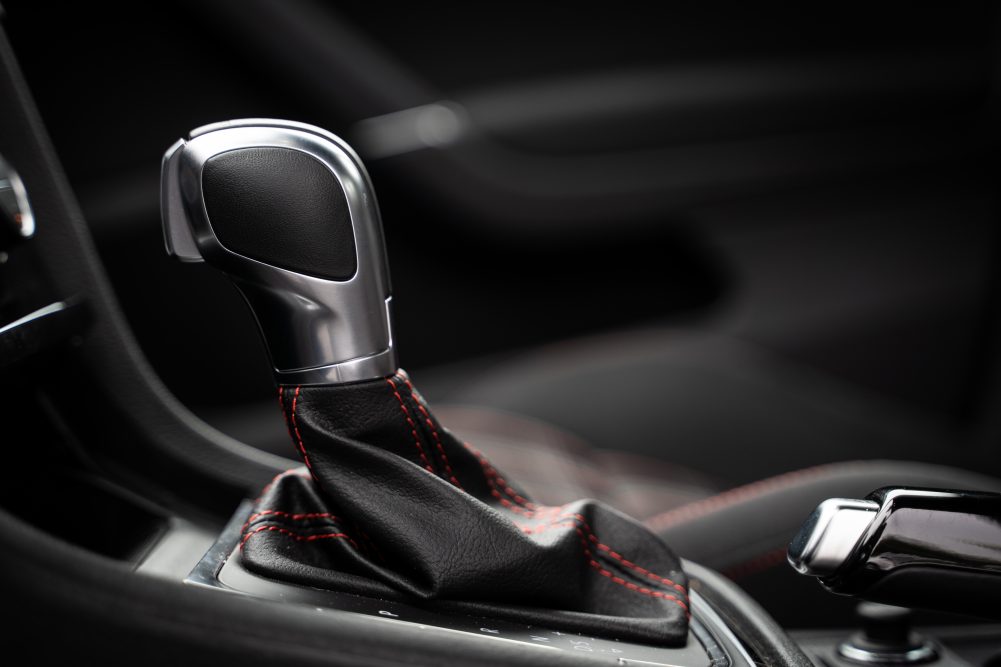 But that’s not to say the automatic is a bad choice. As a matter of fact, the Golf GTI is one of the rare cars I wouldn’t mind buying with a self-shifting transmission. This is one of the best ones out there, lightning quick, witty and adapts super well to your driving habits, which makes the GTI an even better daily driver. 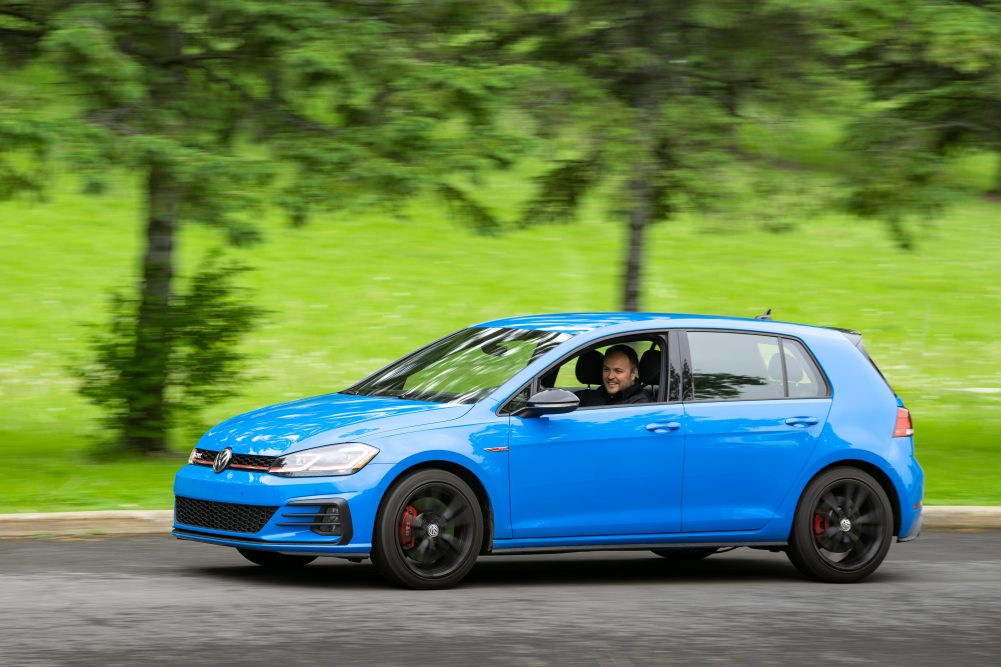 That’s the magic with the 2019 Volkswagen Golf GTI, that it can be driven like a hero all the time, all while doubling down as a subtle commuter car. The MK7 Golf is a fantastic little auto to begin with. It may be small, but its cargo space is still among the largest in the segment. With the rear seats folded flat, it’ll engulf 1,521 liters of your gear, which means it eats both the Mazda3 hatch (1,334 liters) and the Honda Civic hatchback (1,308 liters) for breakfast in terms of practicality. 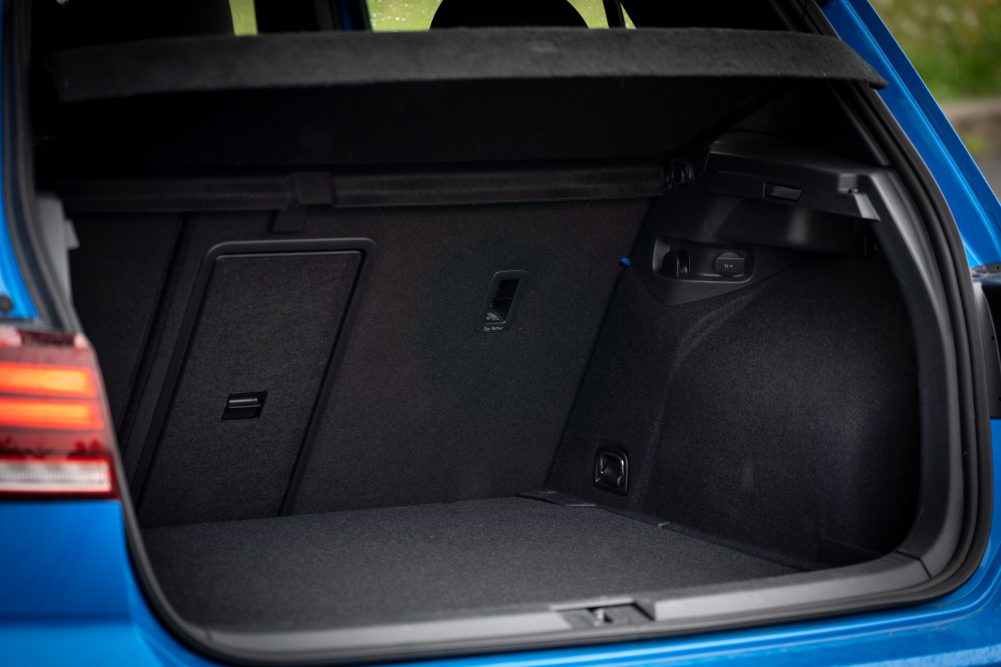 Then, there’s the way the damn thing is built. Even six years after it was originally launched, the Golf feels much more expensive than it is. Material quality is Audi-esque, and the entire car feels as solid as a tank when driven over harsh roads. I also totally dig how the doors thump shut on this compact car. 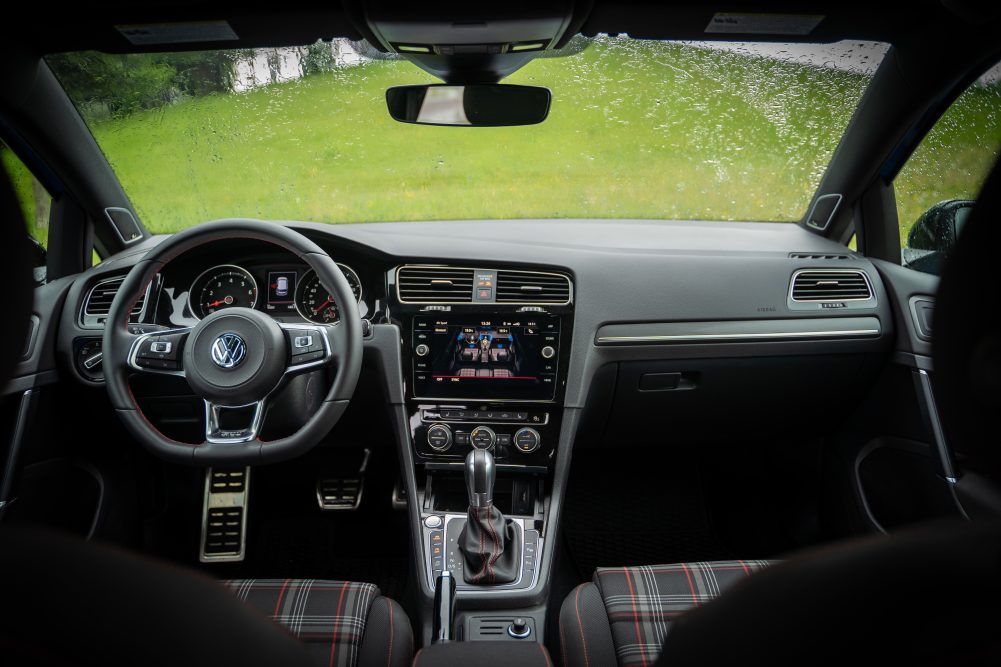 In automatic mode, the Golf GTI is a formidable little family car. Docile, discrete, comfortable and even frugal. I pulled high sixes with my tester while I had it. And I have absolutely nothing to say about its infotainment system, which is downright one of the simplest, quickest and most modern ones in the business.

Set this thing in Sport mode, however, and the little Rabbit suddenly wakes up. Fitted with what Volkswagen calls a Soundaktor – a device that amplifies engine noise in the cabin -, the GTI sounds angry when driven all-out. It’s a low-pitched below of intake sound, ironically similar to the sound of an old VR6 engine – Bruuuh. 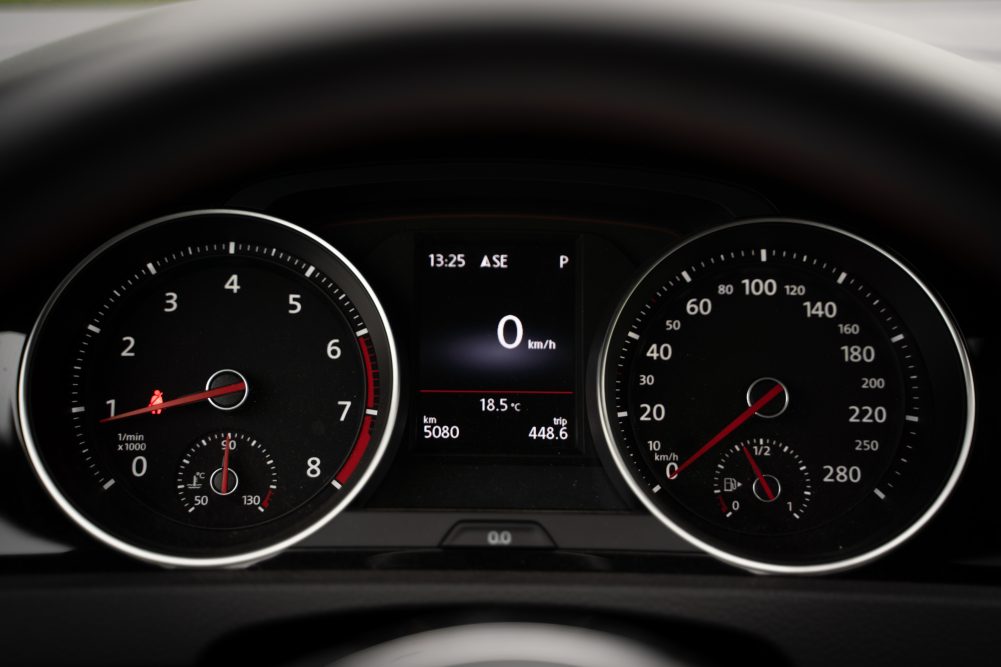 I’m not a fan of it, but it does give the GTI character. Power is linear and smooth, with a willingness to rev. But there’s also massive torque down low. It’s just one of those do-it-all engines. Meanwhile, the gearbox hands you over gears quicker than you have time to blink, with neat little throttle blips upon downshifts and satisfying exhaust farts as it climbs to the next cog. The GTI’s drivetrain feels well engineered, well lubricated and perfectly tailored for all types of driving situations. It’s that dual personality that makes this hot Golf ever so charming, kind of like a shy brunette that only lets her hair down when she’s alone with you. 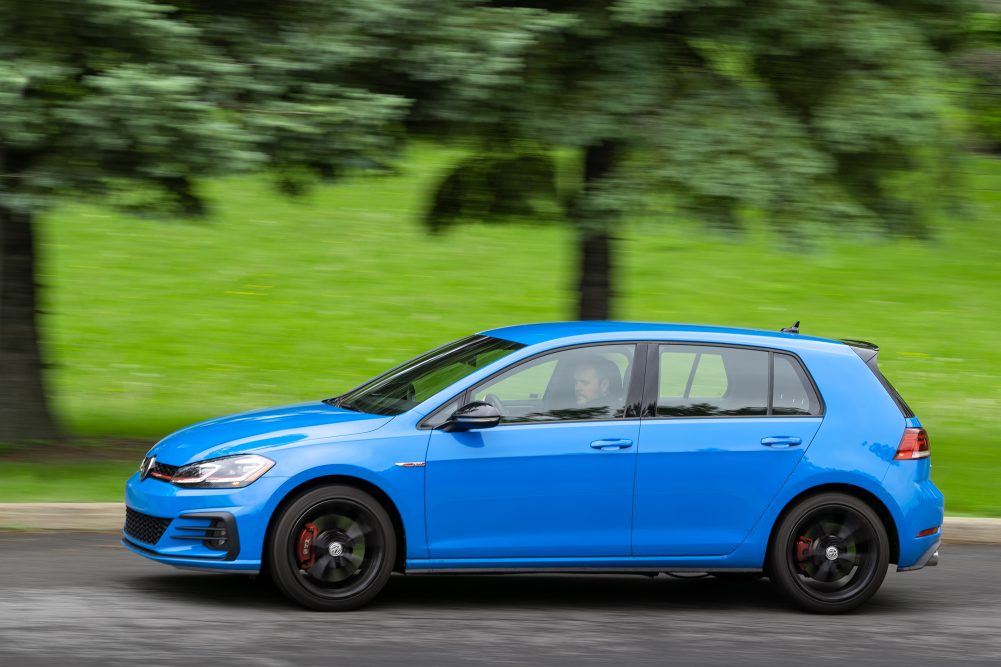 When you drive this thing ten-tenths, which is the only to drive a GTI when you’re not hauling the kids to school, you feel a genuine balance in the way its chassis was tuned. This is still one of the best balanced sports cars out there, with flat, composed handling, minimal understeer given its front-wheel drive configuration and a tendency to wiggle its tail when lifting off the throttle. It’s the kind of handling you want from your hot hatchback; a car that’s easy to push at the limit, but will still show some fangs if you poke it too hard. 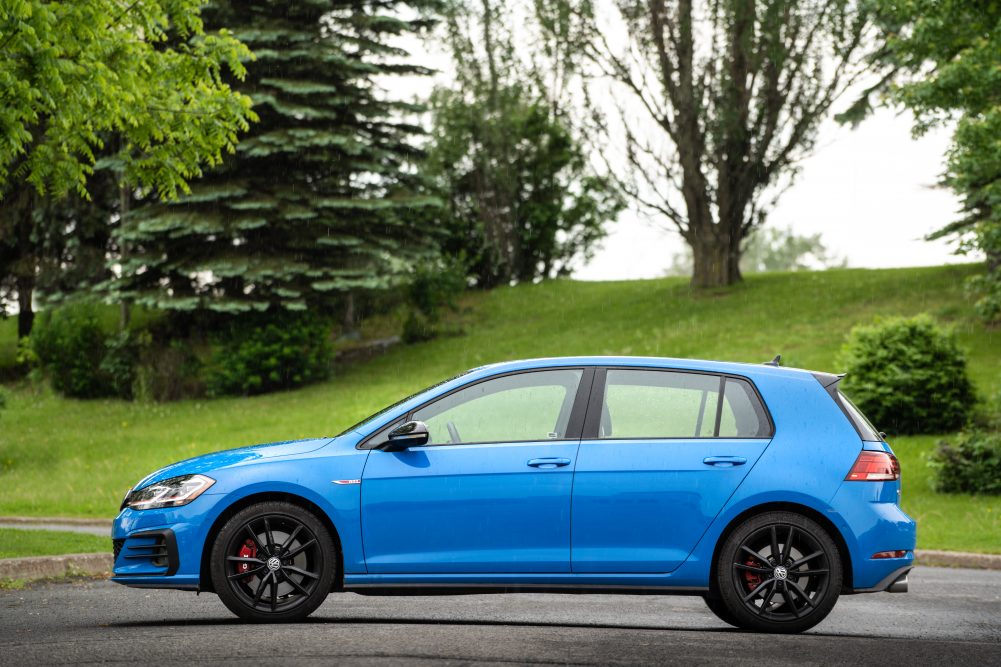 Brakes are super solid, and the GTI’s best dynamic asset is out of corner grip. Gun the throttle once you’re done with the apex and that limited-slip differential claws you back inside. It’s all precise, effective, engaging and, most of all, immensely fun. 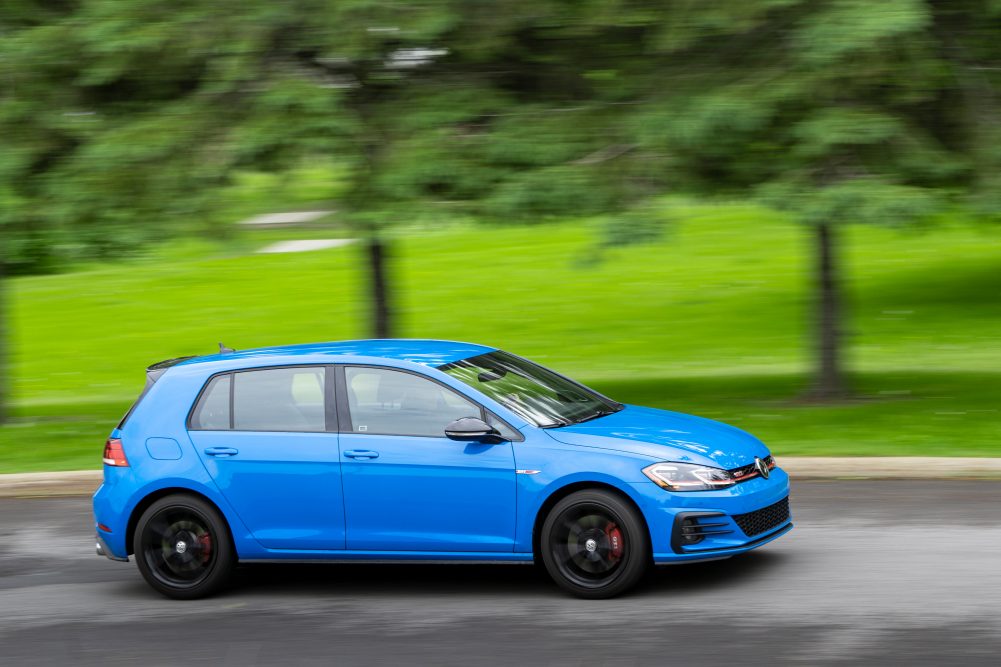 If you stroll through these pages, you’ll find that I’m repeating myself about this hot hatch. Look, the 2019 Volkswagen Golf GTI is the perfect car. Don’t believe me? Go test one out, and if you don’t get out of your drive with a smile on your face, you’re not of this Earth.

Any flaws? Not much. The rear seat remains a tight fit for adults, the power steering turns off during the start/stop sequence which is really annoying, and I’m very pissed off that the GTI doesn’t come in a three-door configuration anymore. That’s about it, really. 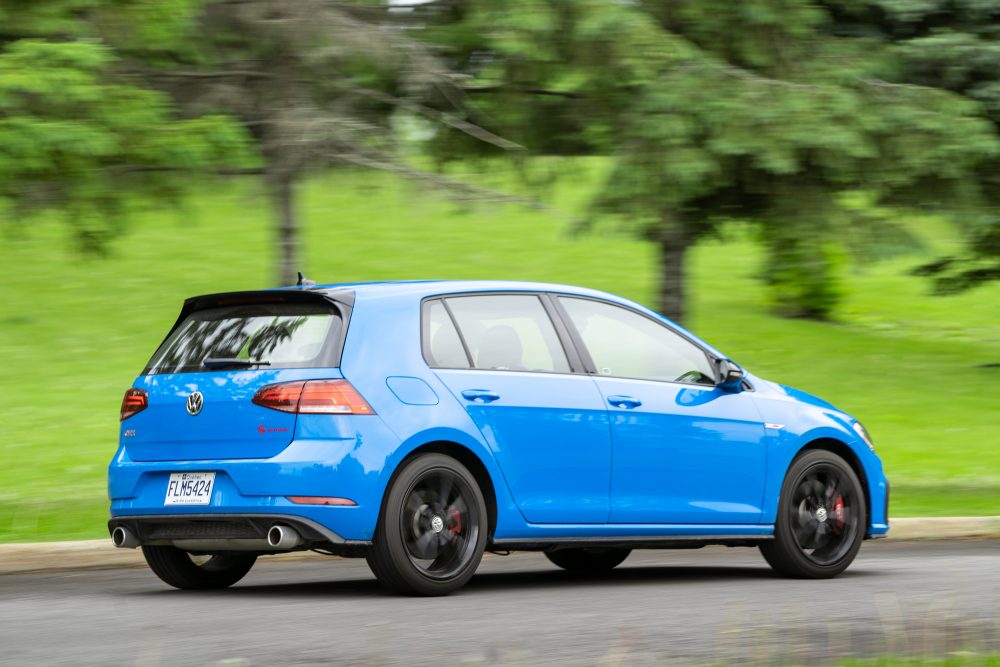 All that’s left for you people to do is stop wasting your hard-earned money on those ridiculous SUVs. Go out and get a Golf GTI before it’s too late. It’s spacious enough for the baby, practical, good-looking, not that expensive and super fun to drive. What more do you want from an automobile?