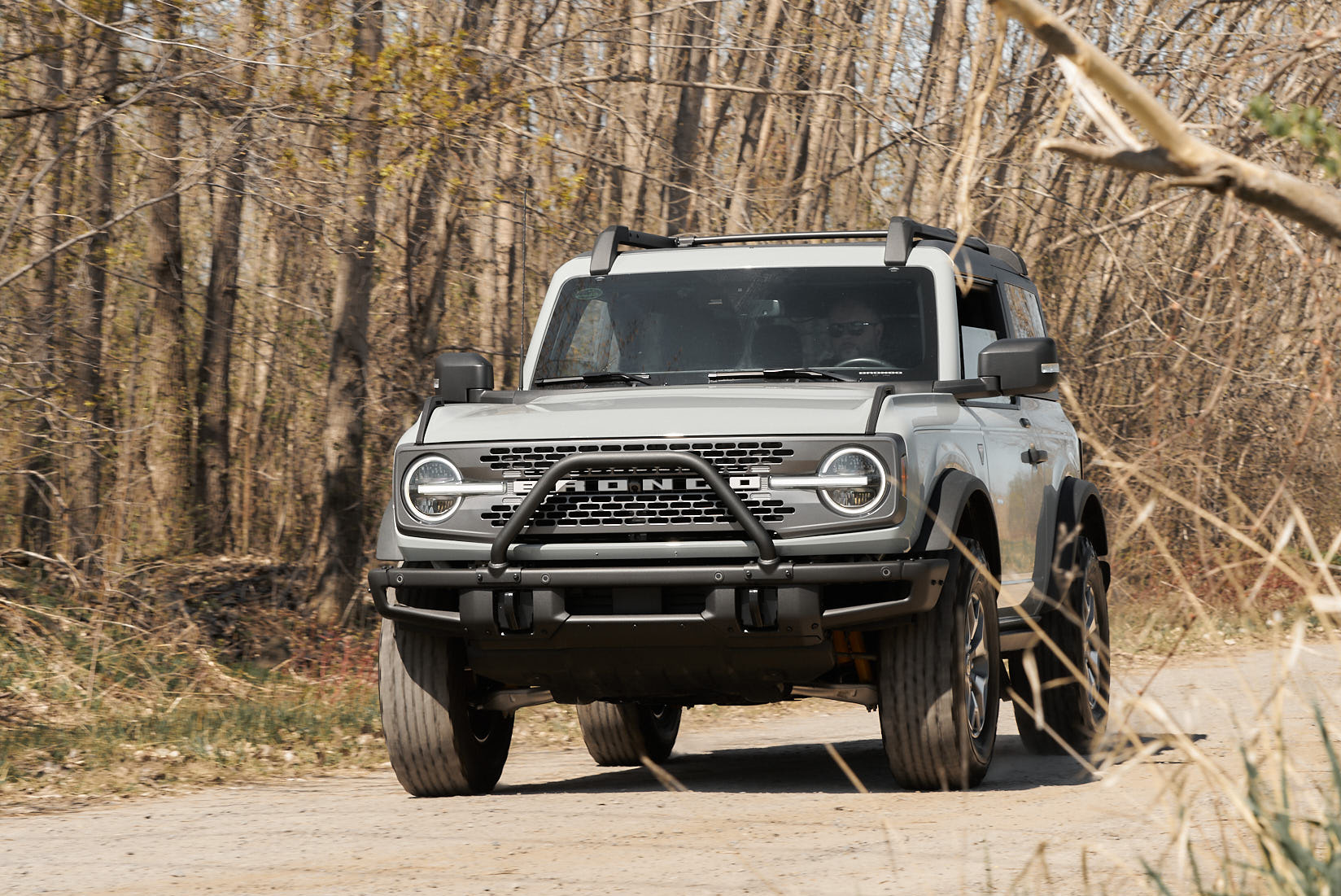 The 2022 Ford Bronco arrived with its share of controversy. Not only was its production seriously impacted by plant shutdowns caused by the COVID-19 global pandemic, the first examples that were equipped with the removable hardtop had serious water infiltration issues. And let’s not forget a series of serious design faults in the engine, causing reliability issues. But none of that matters because the Bronco is still fucking cool. This is where it’s at for me though, the three-door variant with a good-old manual gearbox. Here’s a review. 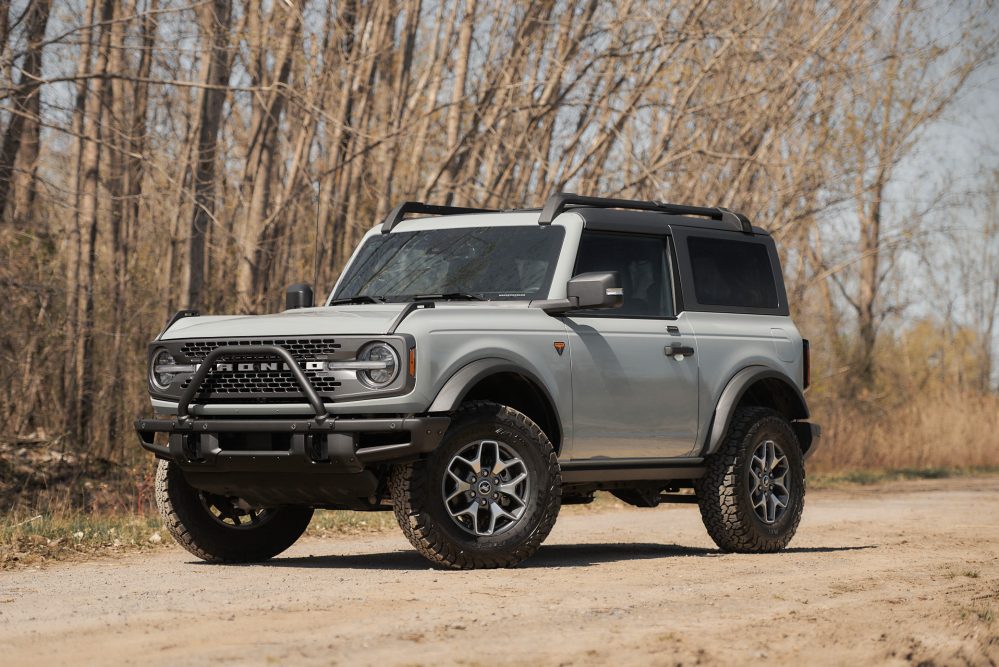 So here’s the thing, while that Wildtrak I drove last year model looked like it had came straight  out of hell to punch the Jeep Wrangler in the gut, it was also way too big and a bit clumsy in an urban environment. What you want from your off-roader is something that’s also easy to live with, somewhat fuel-efficient and simpler to operate when you’re trying to park it at Costco. That’s precisely why the 2022 Ford Bronco you’re seeing in these photos makes a lot more sense. 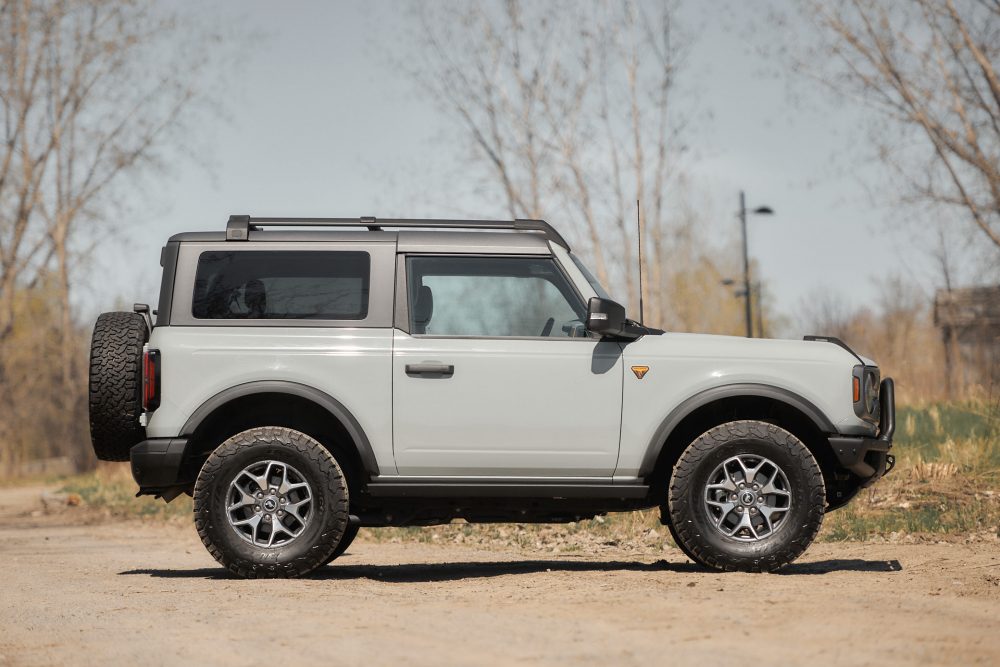 Because just like the Wrangler and the Land Rover Defender for that matter, the two-door configuration is the purest form for these vehicles. It’s the one the engineers put together first, adding an extra set of doors as an afterthought because, well, it won’t sell without them. Yes, I’m well aware that fitting a baby’s seat in a two-door vehicle is nearly impossible these days, but if kids aren’t a problem in your life, then you should know this is the Bronco you want to be with in a trail. 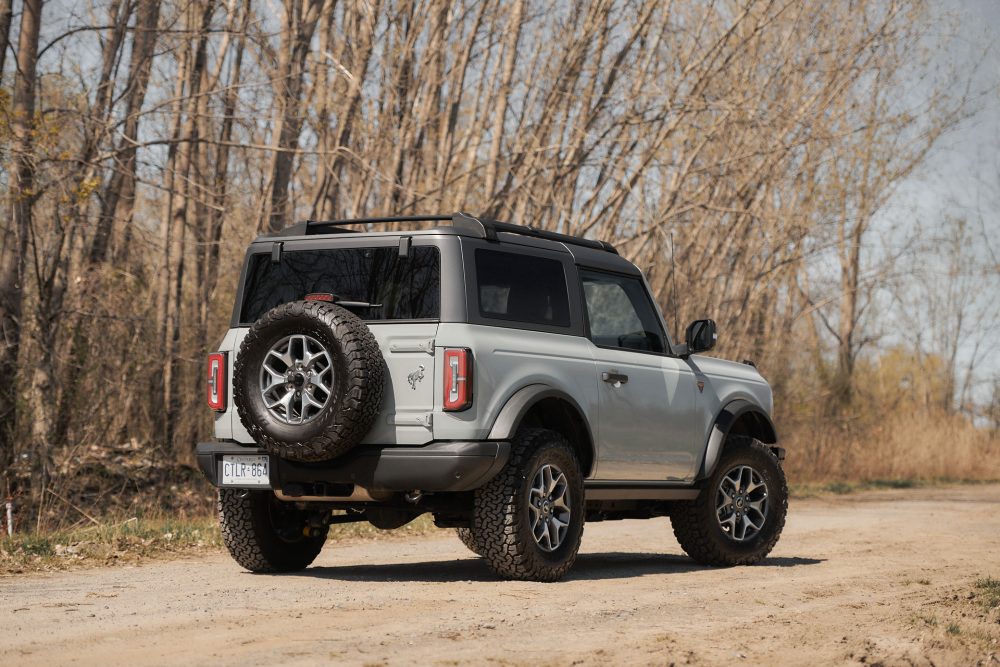 The first reason is the shorter wheelbase, which gives the Bronco more flexibility when climbing through hard obstacles. Being shorter means it’s easier to clear rougher sections. It also lightens the truck, which in turn makes it easier to maneuver. While on the topic of lightness, this one is powered by Ford’s turbocharged 2.3-liter four-cylinder engine and not the V6. This of course removes a lot of weight from the truck’s front end. 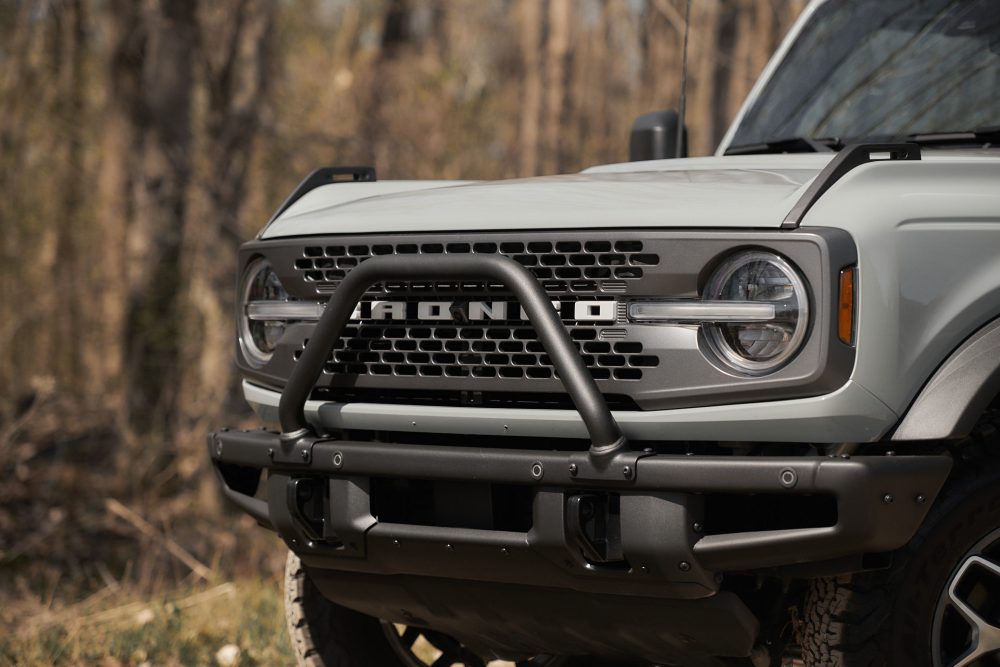 Power from that engine is rated at an ample 275 horsepower and 325 lb-ft of torque, which puts it on par with the Wrangler’s 3.6-liter V6. A ten-speed automatic transmission is available, but mine had the much more interesting seven-speed manual gearbox with integrated crawl gear. God wanted the Bronco to be equipped this way, you heard? 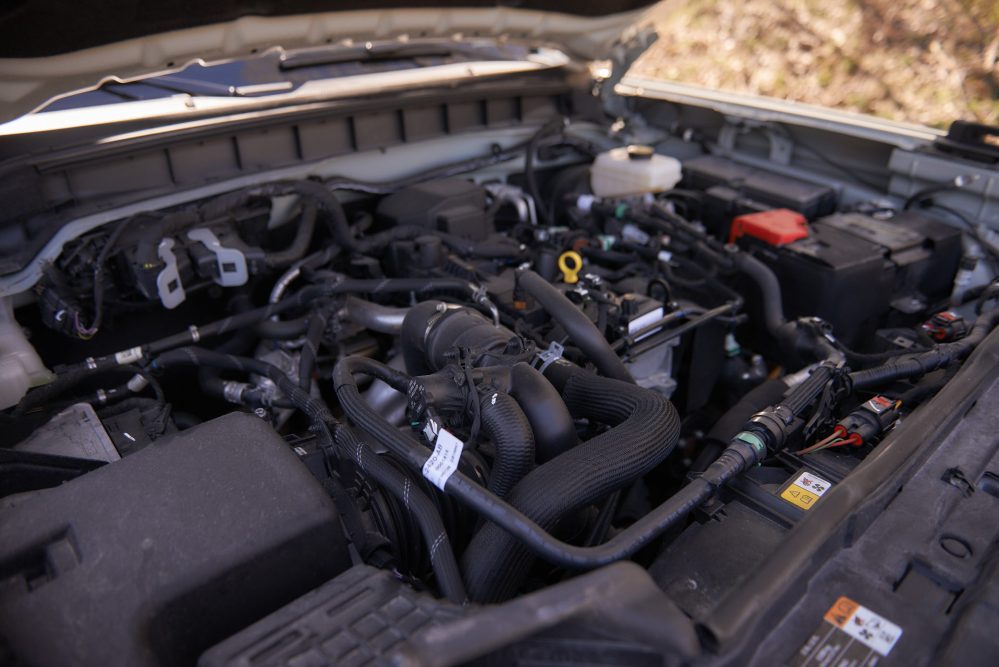 My truck was a Badlands model, which is the fifth of six available trim levels for the 2-door model (the entire Bronco lineup now offers 8 versions, including the new Raptor). It offers either 33 (as tested) or 35-inch off-road tires, a removable sway bar and Bilstein shocks, among other things. It costs $58,944, not cheap.

The Fun And Spunky One 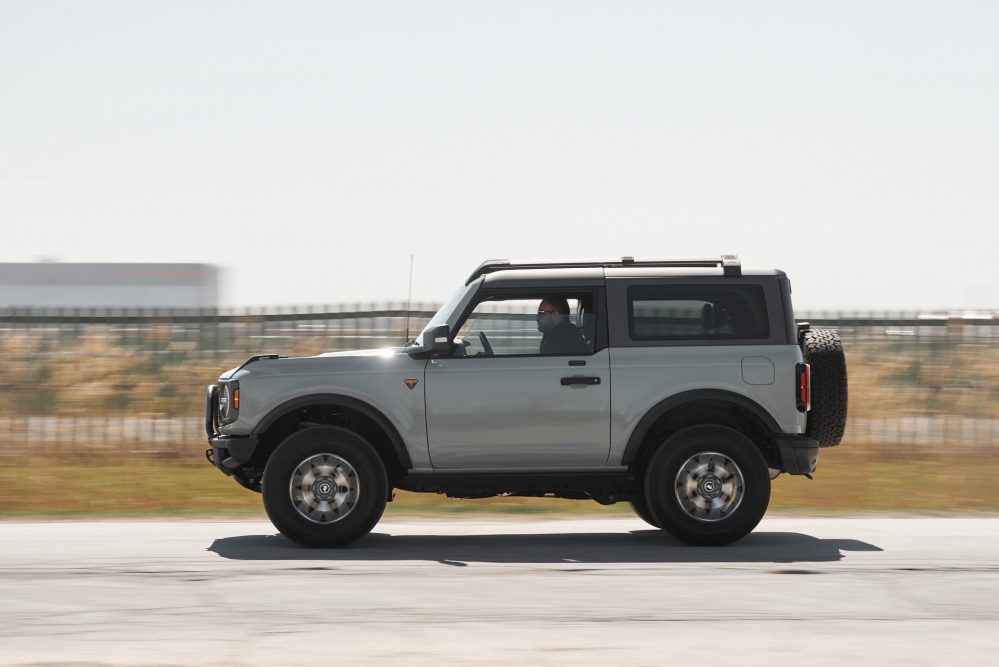 The Ford Bronco 2-door doesn’t only look cool and fun, it is cool and fun, and in many respects, I think I much prefer the four-cylinder engine over the V6. The thing is, when you’re driving an off-road vehicle, power isn’t really a priority. These things don’t handle well anyway. What you want is a drivetrain that’s easy to play with, one that allows you to connect with it and thrash it once and while. And in that respect, the four-cylinder with the stick is a the right combination for precisely these reasons. 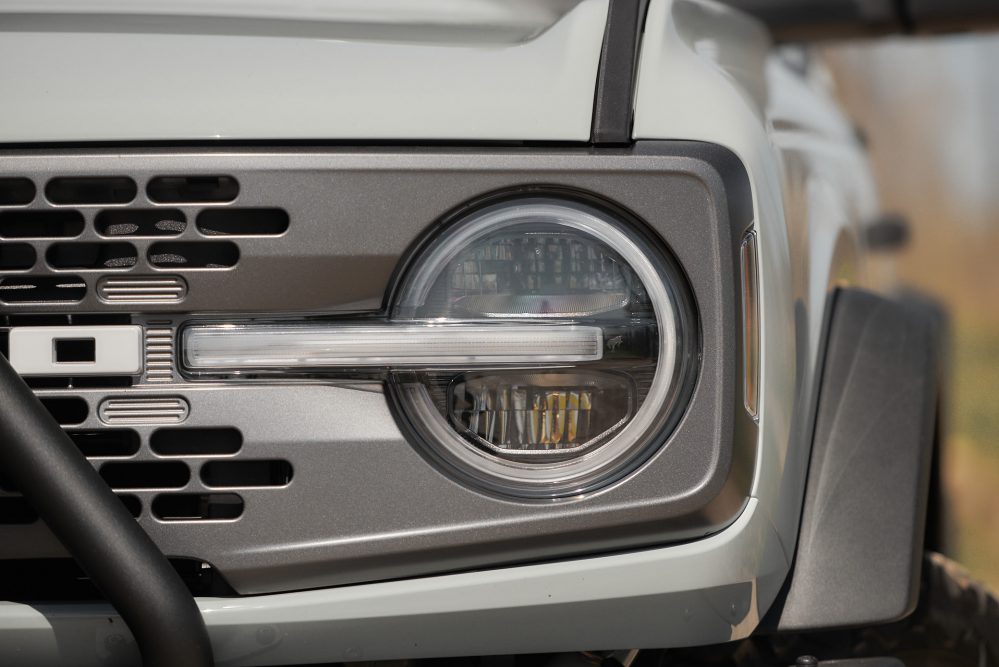 Mind you, it’s not like Ford’s EcoBoost four-cylinder is power-deprived. If anything, it delivers its torque with more urgency than the V6, with loads of it low in the rev range, and never losing puff all the way to the redline. Perhaps what’s more amusing about this drivetrain is how fun it is to push to its limits. I’ll even add that the shifter is way more fun to row around than it has any right to. It’s also much more engaging than the Wrangler’s god-awful setup. 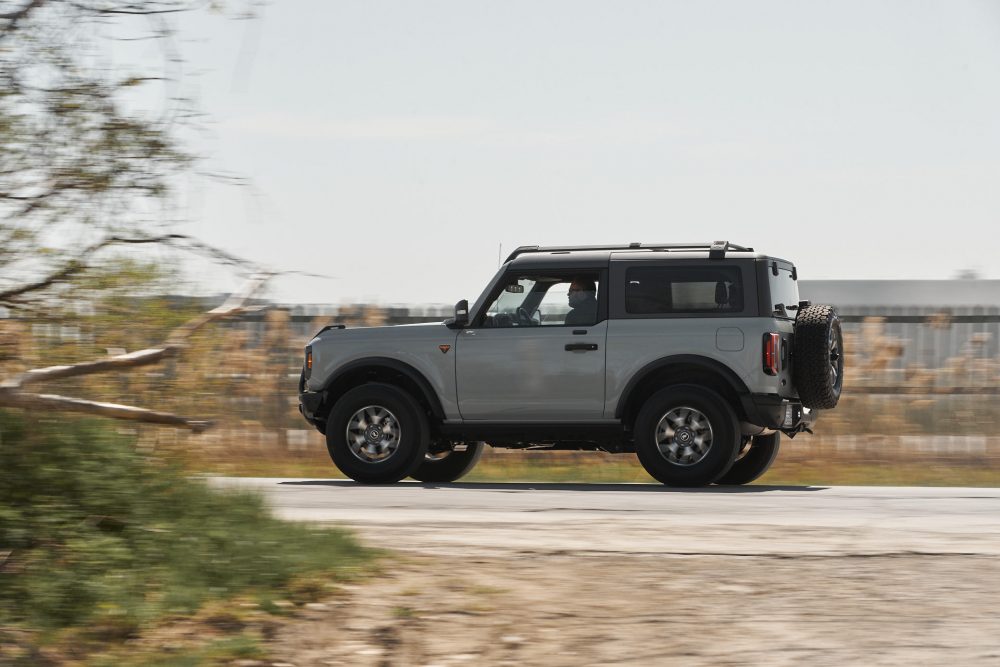 The 2022 Ford Bronco’s short wheelbase and body on frame configuration give it a rudimentary feel, in the sense that it’s bouncy and jagged over beaten roads, but it’s not as painful as in a Wrangler. Catch a road imperfection while driving fast at an angle and the entire thing changes trajectory, as if a ramming bull just ran up its ass. My tester also had annoying cabin rattling, courtesy of that stupid removable hard top. But by now, Ford should have recalled all examples and fixed that issue. 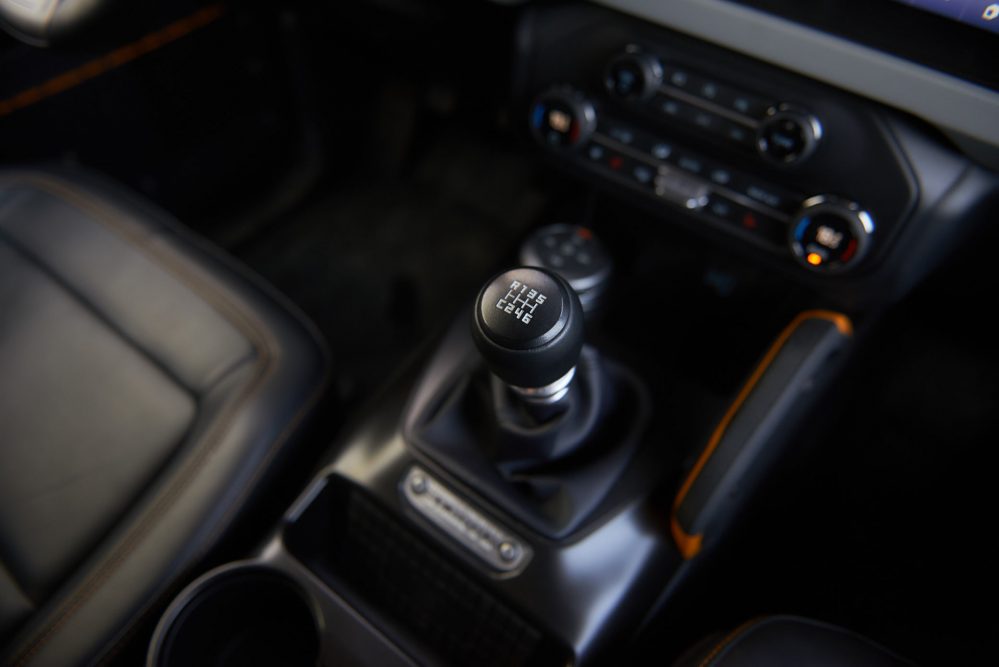 By far the most amusing feature is the crawl gear which doesn’t require much to activate. All you do is shift it yourself. Most modern off-roaders will give you access to such a feature by navigating through its infotainment system or pressing buttons, but in the Bronco manual, it’s all you. This adds an extra layer of coolness to this configuration. 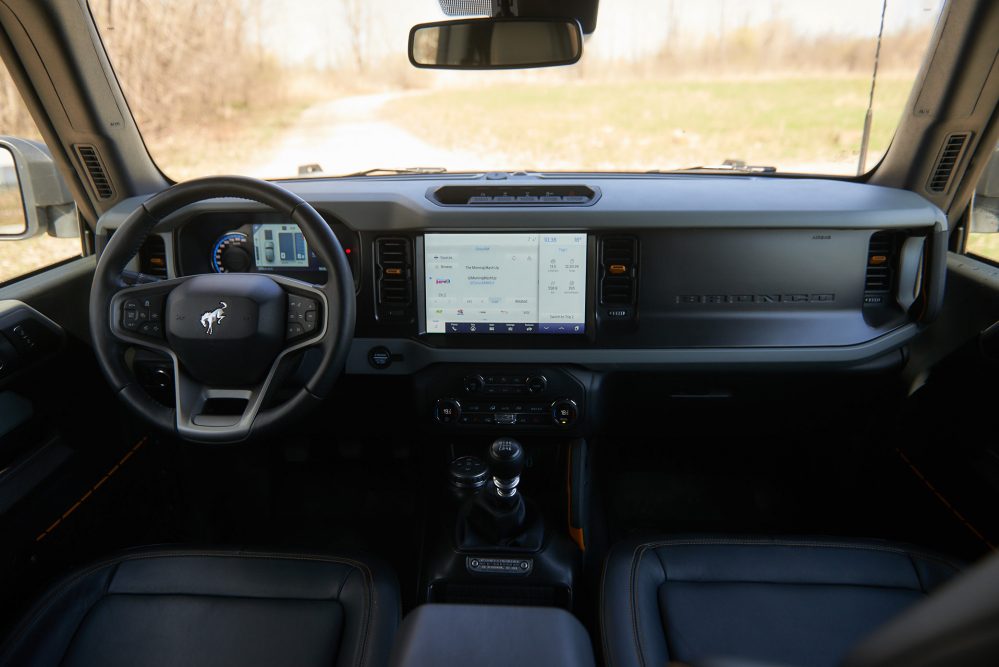 Inside, the tow-door Bronco is essentially the same as the four-door in the sense that there’s a clever use of the available space, plenty of storage solutions and materials that are both enjoyable to touch and tough enough to take on the elements. 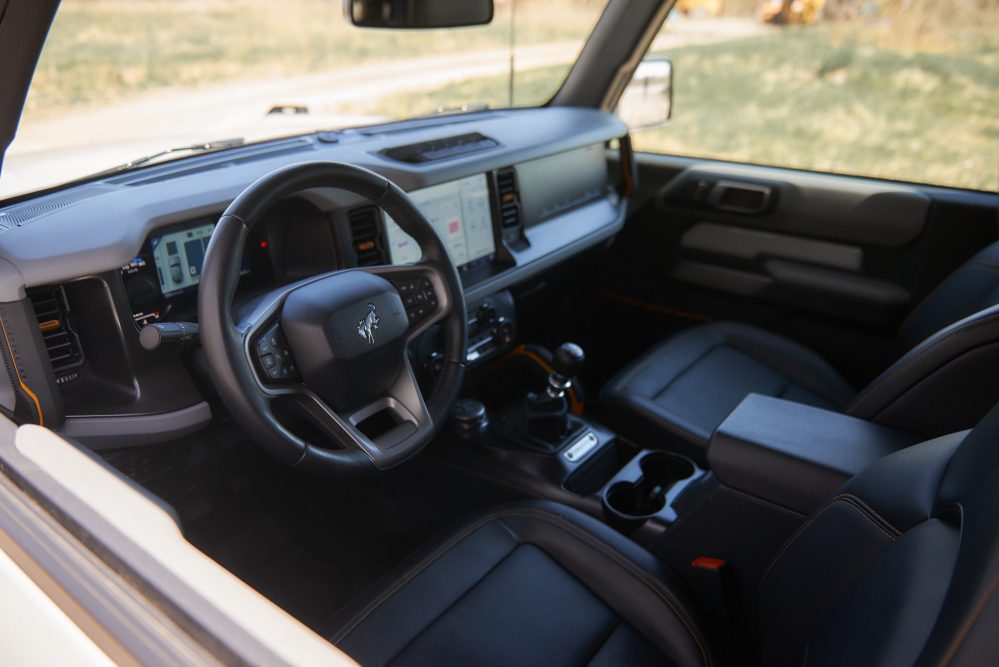 Ford’s Sync 4 infotainment interface is both modern, fluid and up to date with the latest connectivity features, including wireless Android Auto and Apply CarPlay. Over-the-air updates mean this system will continuously improve itself, adding cool apps like an off-road navigation system that memorizes a trail for repeated use. 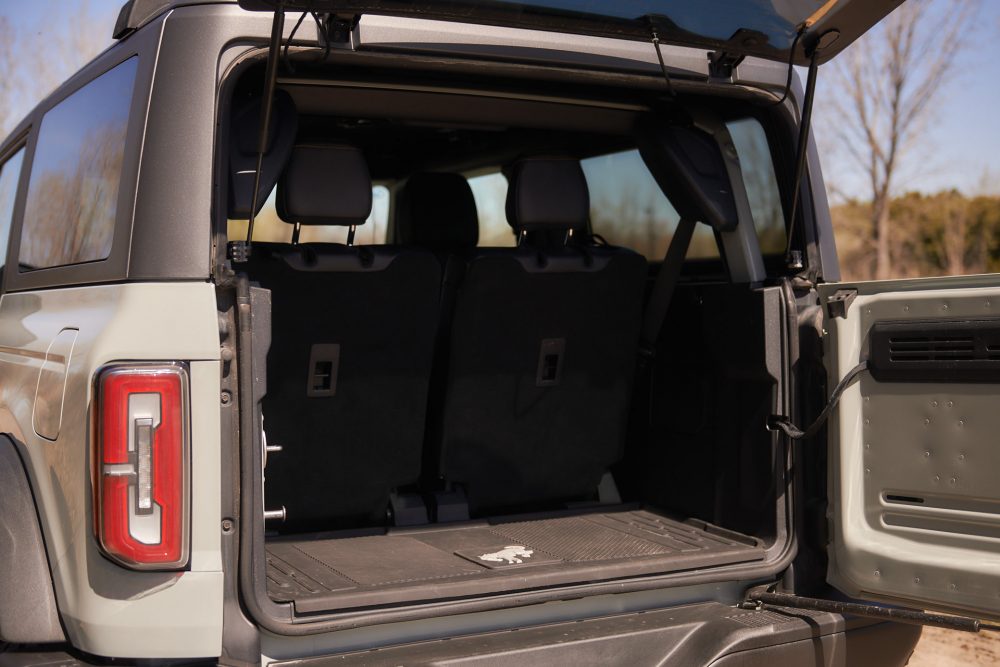 Accessing the rear seat in the this Bronco requires a bit of a workout, but once you’re back there the amount of head and leg room is impressive considering how short this thing is. Two adults can sit comfortably back there and the swingback trunk door is handy for throwing your gear in a hurry. 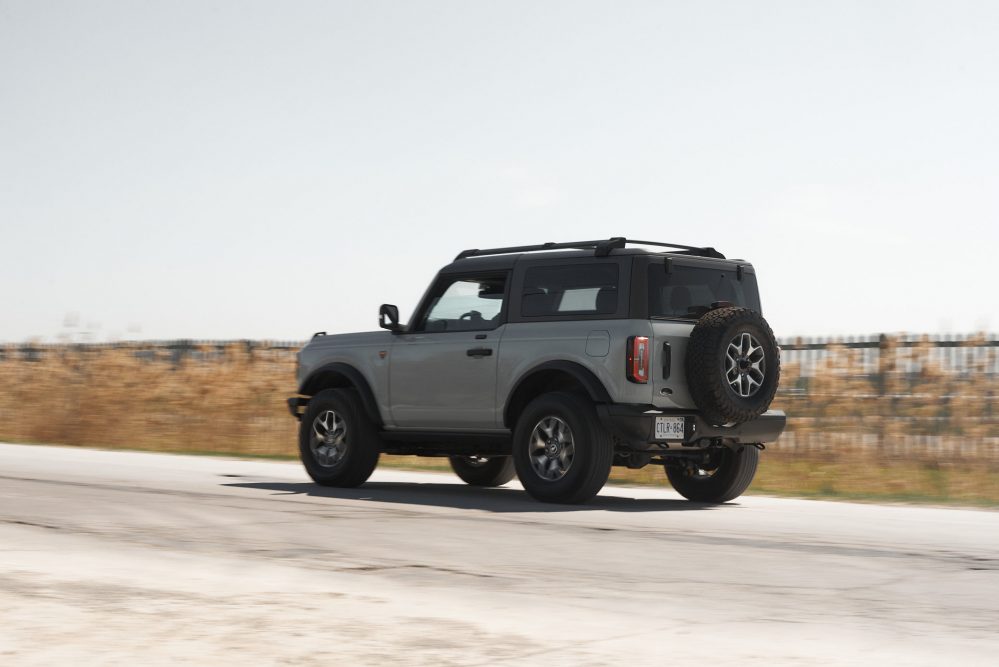 I mean, the 2022 Ford Bronco 2-door is essentially a carbon copy of the Jeep Wrangler that’s been existing for decades. But it’s about time Jeep had some competition and it feels good that it’s coming from Ford. The thing is, Ford offers more off-road features out of the box and way more configurations to choose from than a Wrangler. All Broncos should be equipped like the one you see here. I’d personally go even lower by getting a base $45,000 example with a stick and steel wheels. Hell yeah!