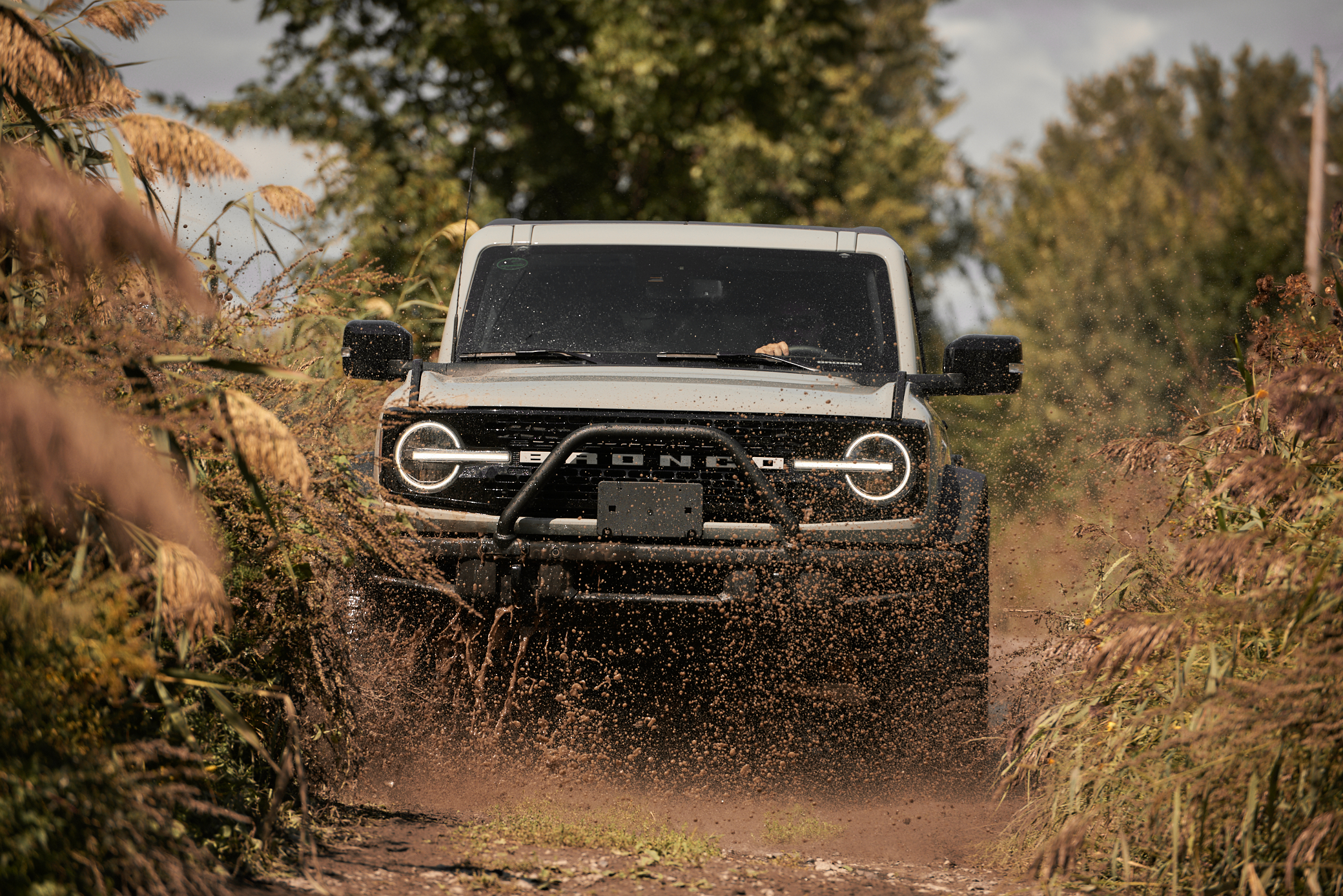 The 2021 Ford Bronco is the real Bronco, not the car-based Bronco Sport you read about on these pages a few weeks ago. Is it good? It is! As a matter of fact, in terms of refinement, the Bronco bridges the gap between a Jeep Wrangler and a Land Rover Defender. It’s also the first time the Wrangler gets a true competitor that isn’t a Toyota 4Runner. Here’s the full rundown.

Wildtrak All The Broncos 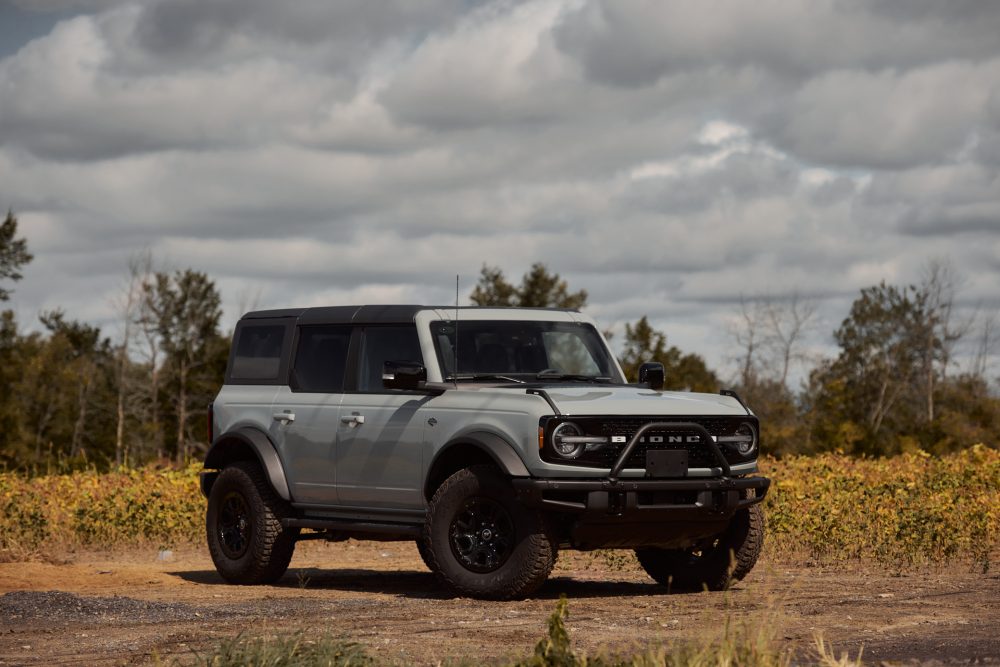 We’ve been waiting an eternity for the Bronco to make its comeback, and the poor thing has not been off to a good start. As if a worldwide pandemic, plant closures and chip shortages weren’t enough, when the Bronco was finally built and ready to be shipped to its owners, Ford realized the removable hard roofs were junk. 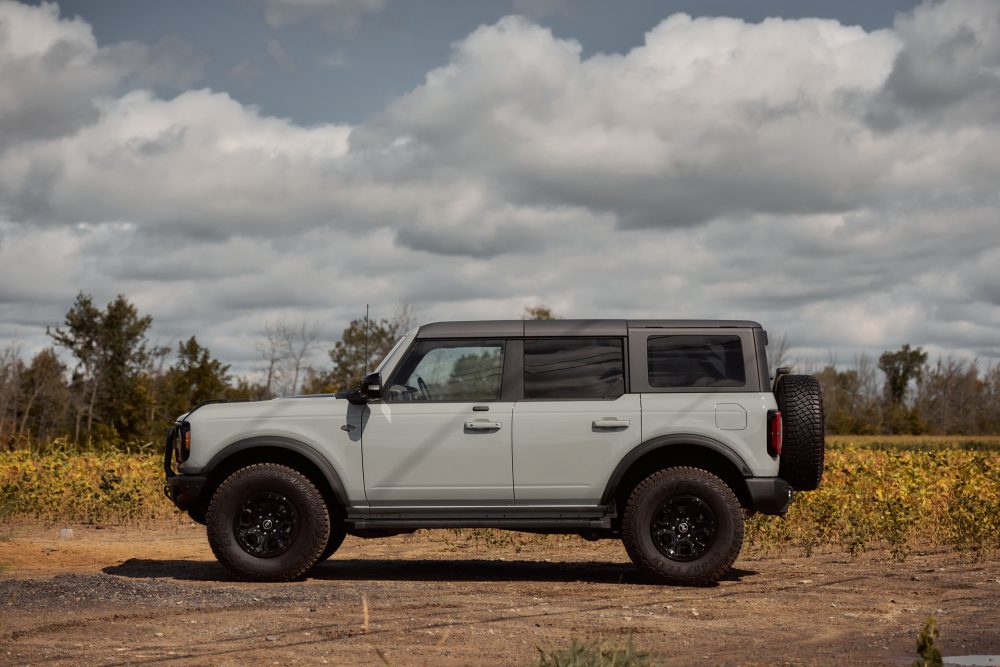 As I write this, all hard top Broncos are recalled, and there’s a stop sale on the vehicles that haven’t yet left the factory. Ford tells me new roofs should be installed by mid-October. If you currently own a Bronco, your dealership probably already contacted you about this. 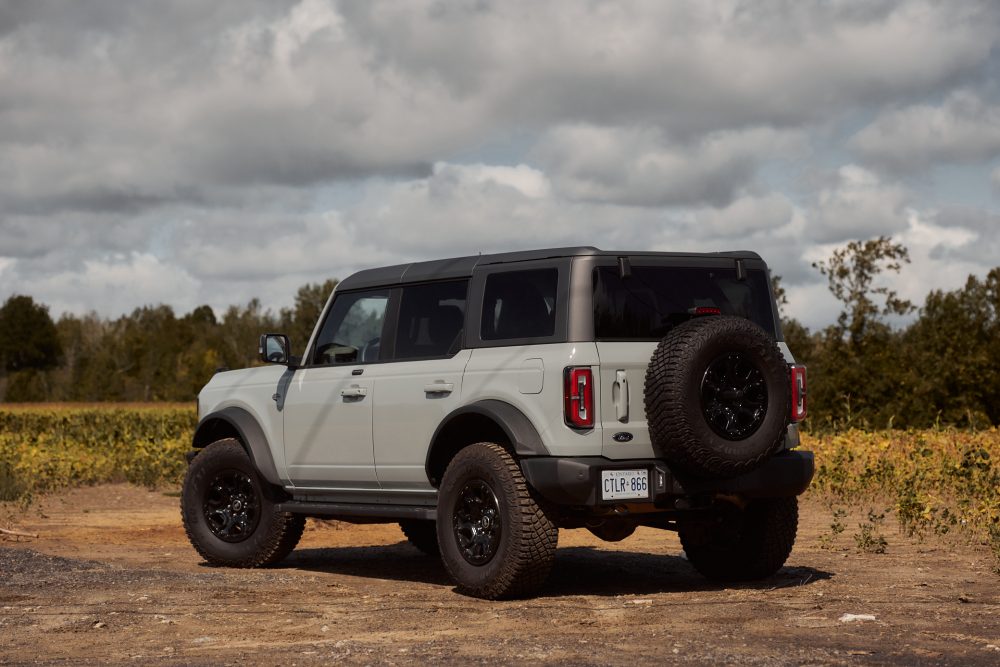 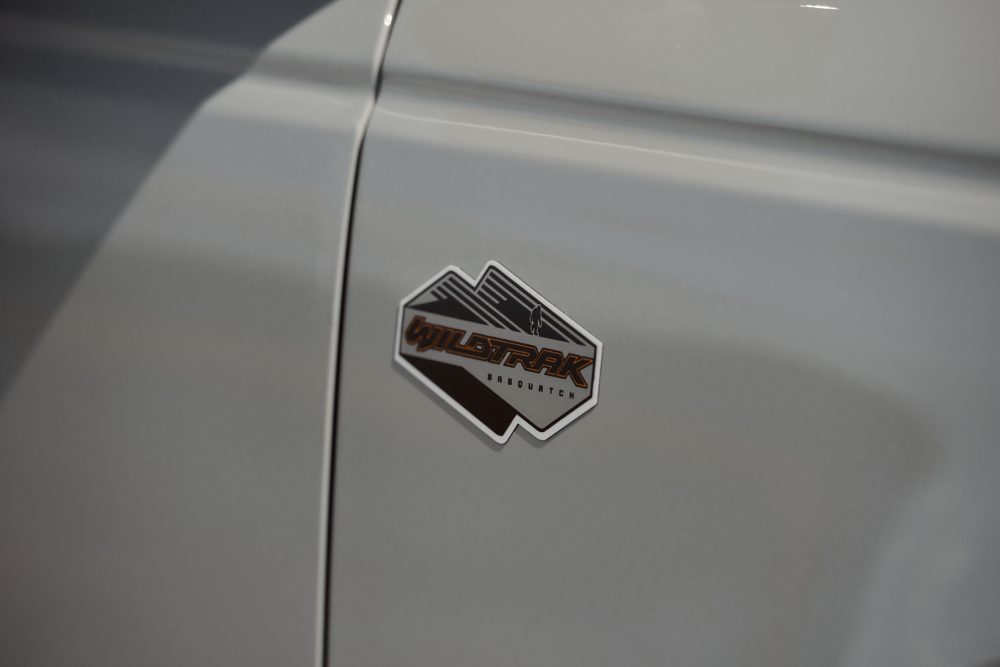 In my opinion, all Broncos should only come equipped this way, because in its most basic form, the four-door Bronco looks a little weird. That’s where the Wrangler wins: it doesn’t need to be all dressed up to look cool. 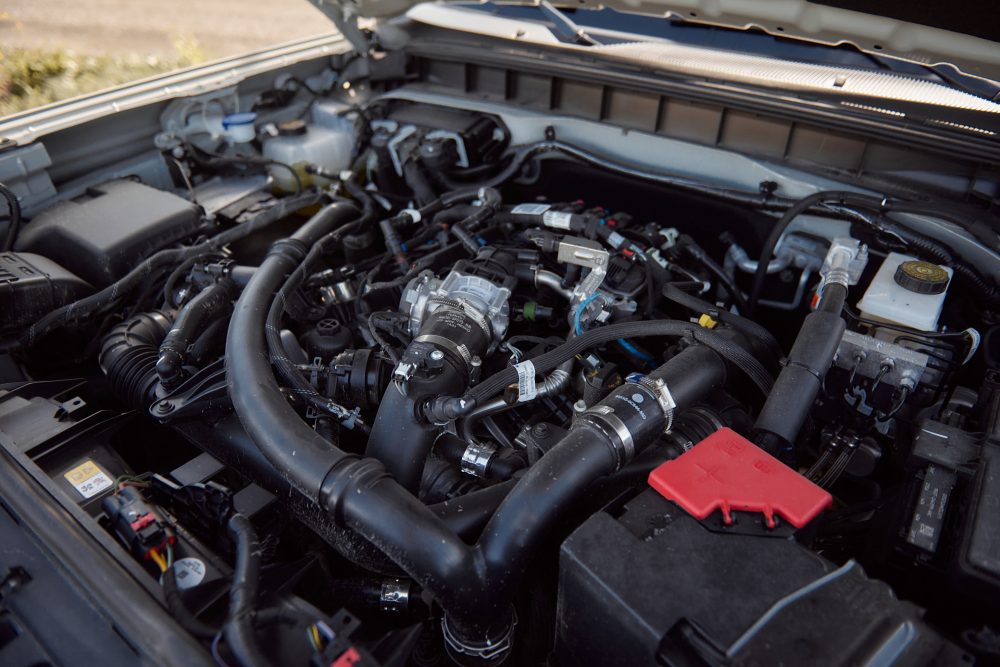 Two engine choices are available for Ford’s latest off-road rig. Entry level models make do with a turbocharged 2.3-liter turbocharged (EcoBoost) four-cylinder good for 275 horsepower and 315 lb-ft of torque. That engine can either be mated to a seven-speed manual gearbox with a crawl gear, or a ten-speed automatic. The more powerful option, which comes standard with the Wildtrak, is a twin-turbocharged 2.7-liter V6. It’s rated at 315 horsepower and 410 lb-ft of torque and only comes with the automatic. Four-wheel drive is of course standard across the Bronco lineup. 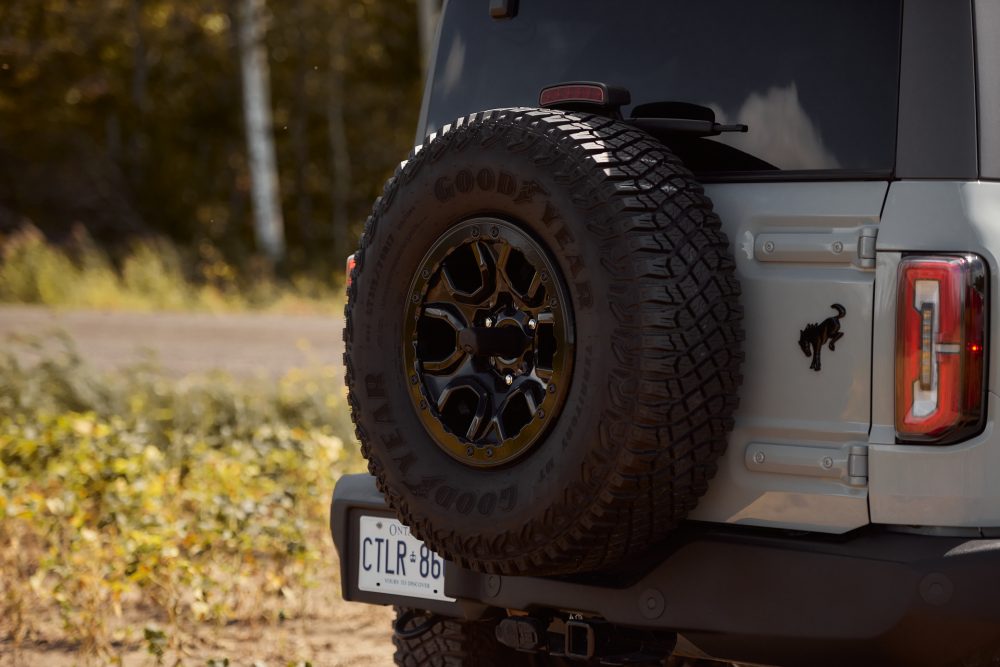 Pricing for a Ford Bronco is rather competitive considering the amount of available configurations the vehicle comes in. A base, two-door model with the manual gearbox and steelies kicks off at $40,499. My tester sat at the top of the lineup with a final and very expensive sticker price of $71,289. 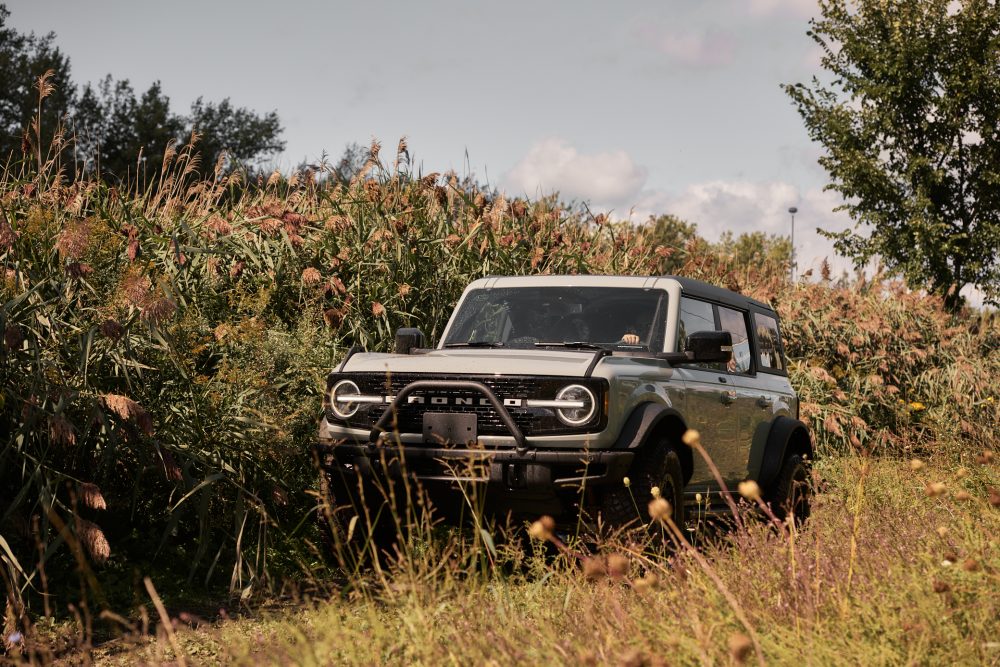 That was perhaps the most stunning realization when driving the 2021 Ford Bronco: how smooth it is on the road. Sure, it probably had something to do with those large,  knobby tires and upgraded dampers, but it never felt as wobbly nor as rough as a Wrangler Rubicon. As far as body on frame SUVs go, this is rather great, almost as smooth and composed as a unibody Land Rover Defender. 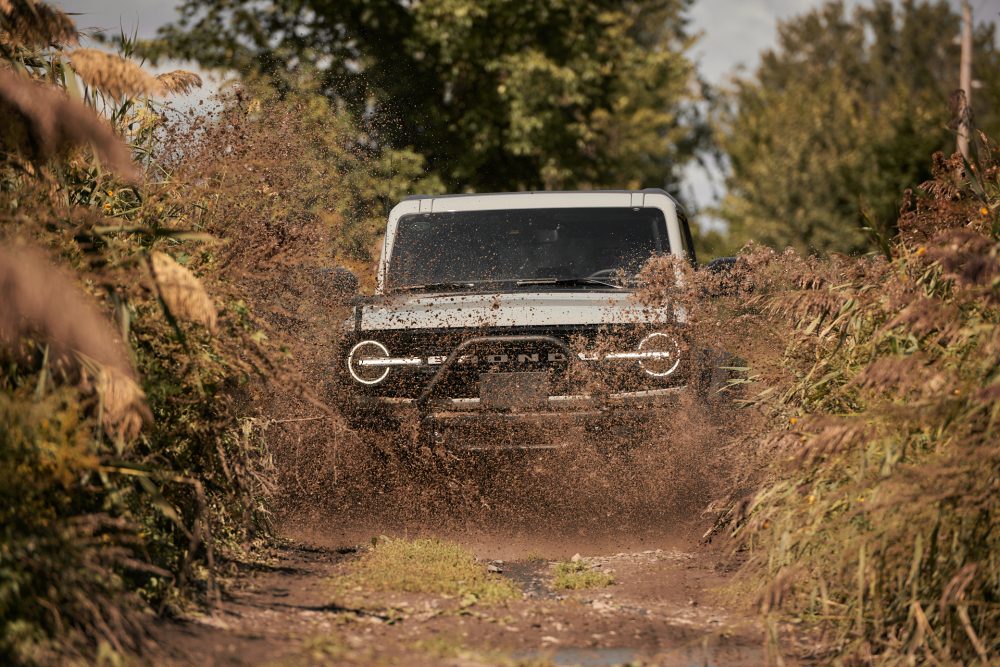 I took the Bronco out in the same trail I try all my off-road rigs. I like that trail because it contains a good blend of rocks, mud, holes and inclines, as well as a long stretch of gravel road before entering the trail. Each vehicle I bring there shows me its true colors, and most of them are given a run for their money each time I get their bodies soaked in mud. Yet, in the Bronco, the entire trail felt way too softcore for the machine I was driving. 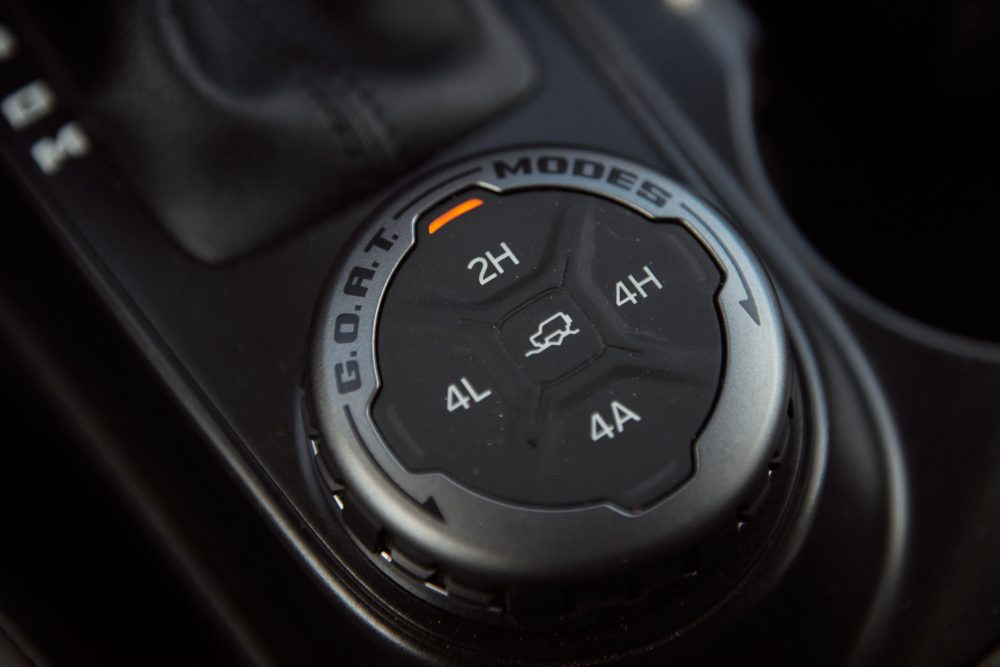 In typical Ford fashion, the Bronco comes with a wide variety of pre-configured drive modes. I prefer manually selecting things myself, like locking the front and rear lockers, setting the rig into 4×4 low, and letting it crawl its way through the muddy chasms. Obviously the Bronco ate up that trail in one bite. 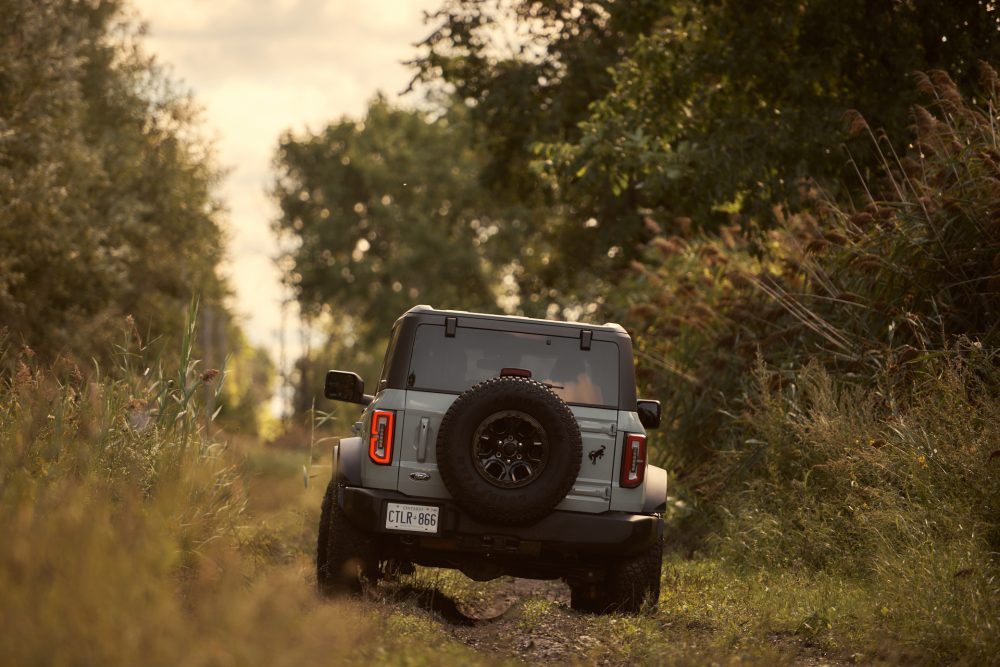 When I got out, I made sure to properly floor the beast with traction control off to sample the V6 engine’s massive low-end torque. What I particularly like about this engine is its ability to propel the Bronco at much quicker speeds than a Wrangler, but to also feel a lot more flexible thanks to its ability to churn good twist down low, and then rev easily as you start gaining speed. 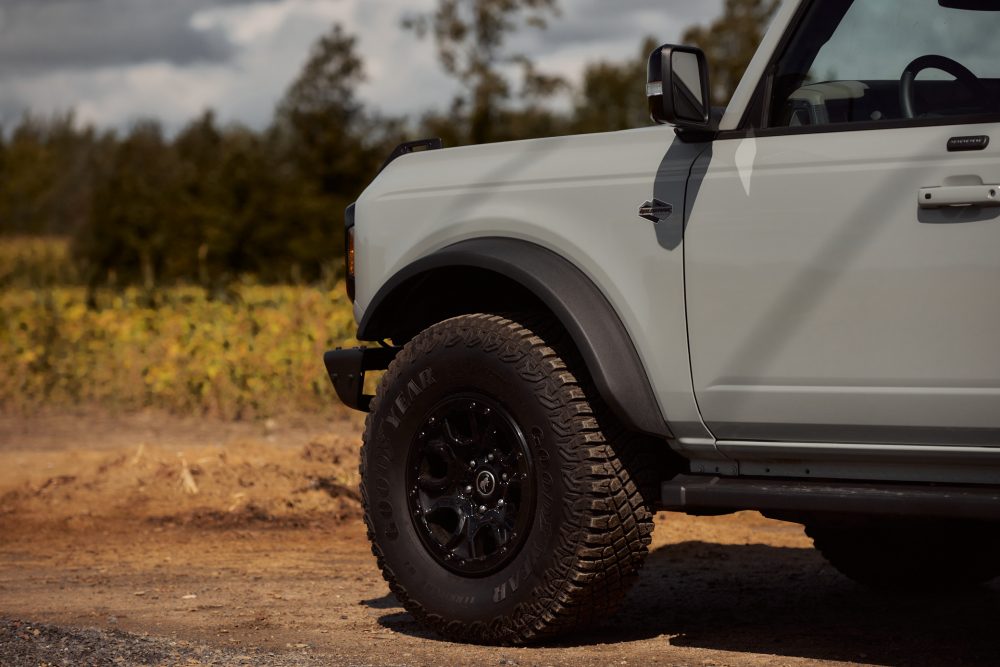 In two-wheel drive mode, with all driving aids removed, the Bronco has a nice Baja truck feel to it. The suspension is bouncy, and the big tires add body roll, but it’s also all controllable at the limit, allowing itself to kick out the rear for some good old fashion hooning. There’s a smidge of Ford F-150 Raptor in the way the Bronco tackles a bumpy piece of road. That makes it a hell of a lot of fun to drive. 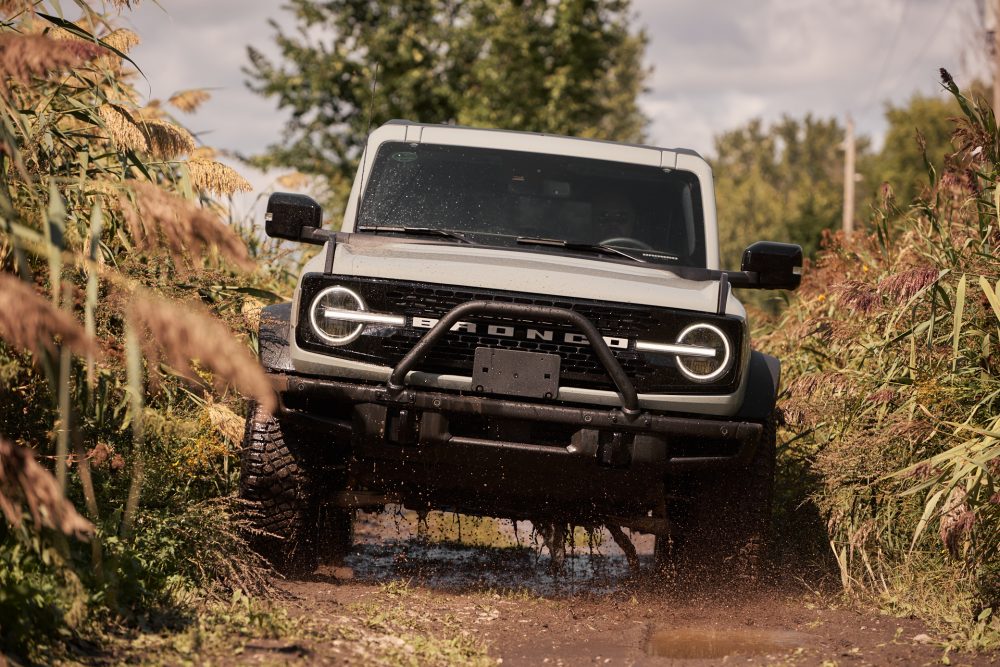 Back on the open road, the ten-speed gearbox dialed things back to ensure that the V6 runs down low in the rev range to maximize fuel economy. Unfortunately, the Bronco’s boxy shape and gigantic tires don’t help, which means I returned a fuel consumption average of 13.2L/100 km. I mean, for a vehicle if this type, it’s fine. but a Jeep Wrangler 2.0T will get better mileage. 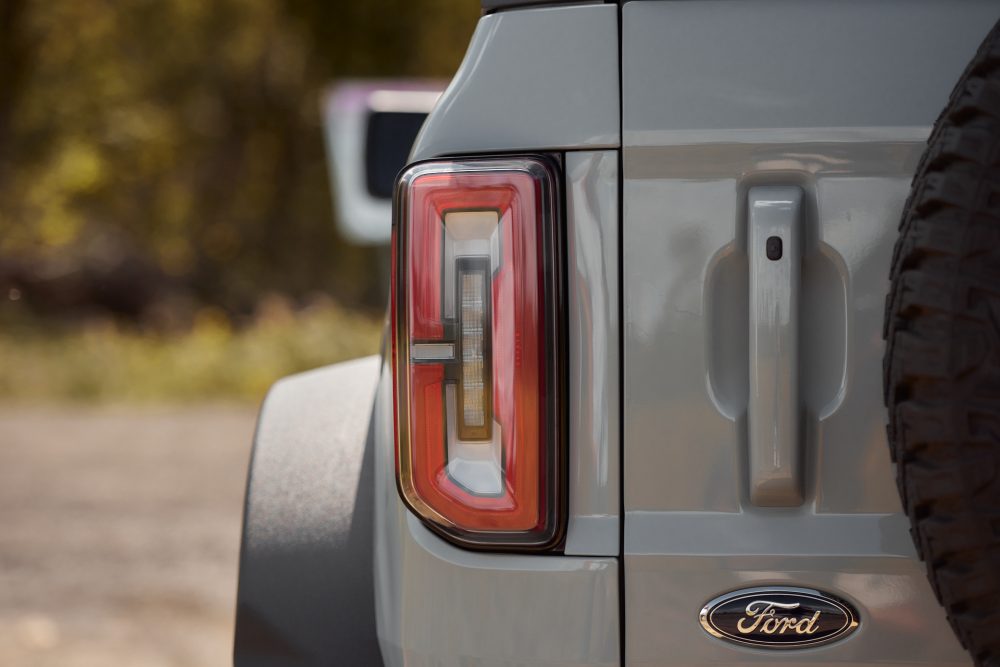 Of course, my model being a hard top meant the roof kept squeaking and rattling at highway speeds, something that should be fixed through the recall. But that roof is also quite complicated to stow. The first two front panels are tiny enough to be left in the trunk, but good luck fitting the other larger ones back there without lowering the seats. That’s where you sense Jeep has more experience in the way the roof sections were designed. Jeep also offers more convertible roof options than Ford. 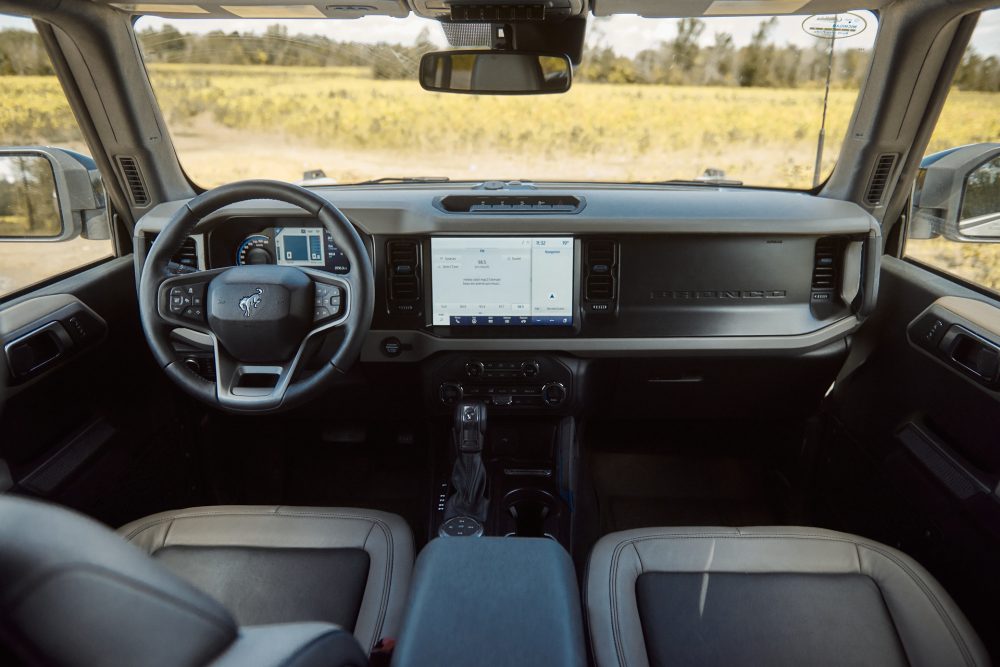 Inside, it’s a clean mashup of old adventure machine meets modern urban automobile. The flat dashboard feels very Jeep-like, but the fully digital gauge pod has a clean interface and large numbers to always know at what speed you’re going. Ford also fits the Bronco Wildtrak with the largest available infotainment screen. At 12-inches, the screen incorporates Ford’s Sync 4 infotainment interface with over the air updates. It’s well presented, quick to react and connects easily to your wireless Android Auto or Apple CarPlay. 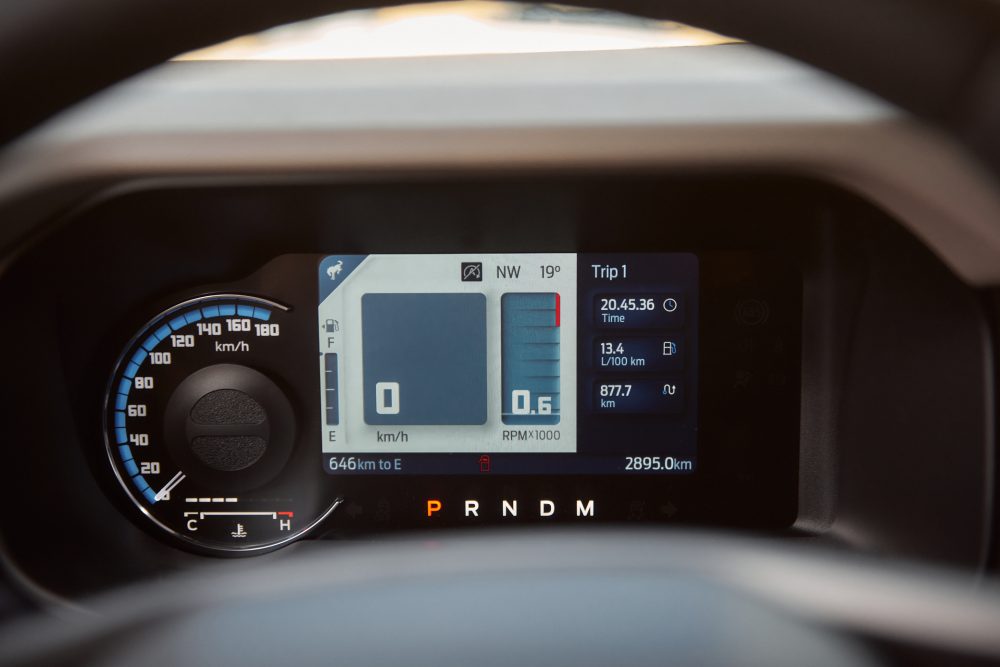 Overall comfort in a Bronco is good, with good quality materials and impressive build quality considering its American origins. Out the rear, there’s an ample amount of leg and headroom as well as witty storage solutions to stow your adventure-seeking gear. 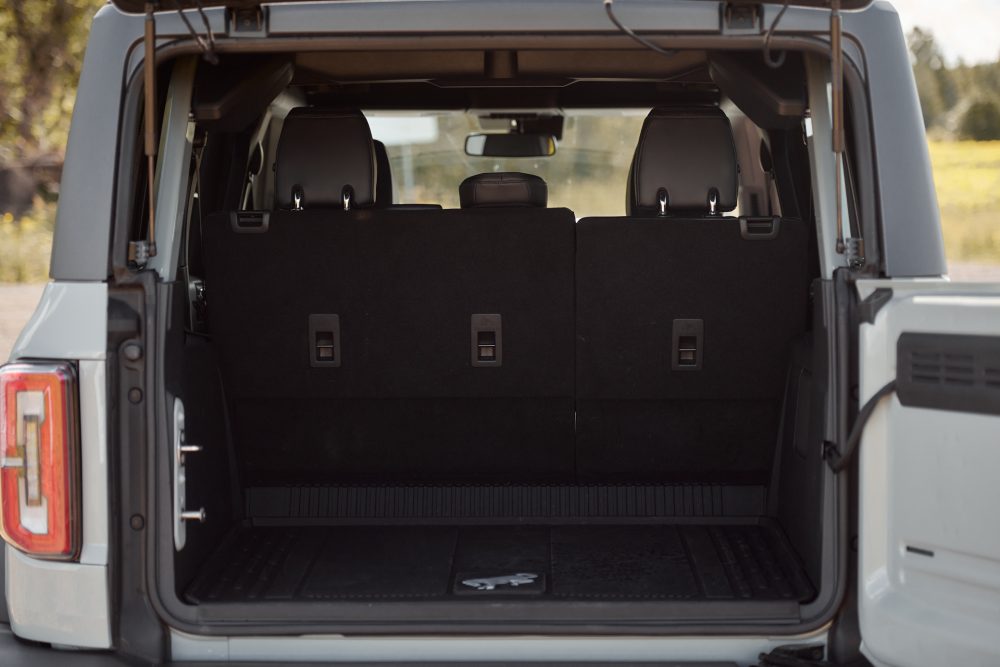 Extra points go to an easily washable interior with water-resistant seats. If you look carefully in the trunk, toward the right side of the truck, you’ll spot a bottle opener for those evening outings with the mountain bike crew. 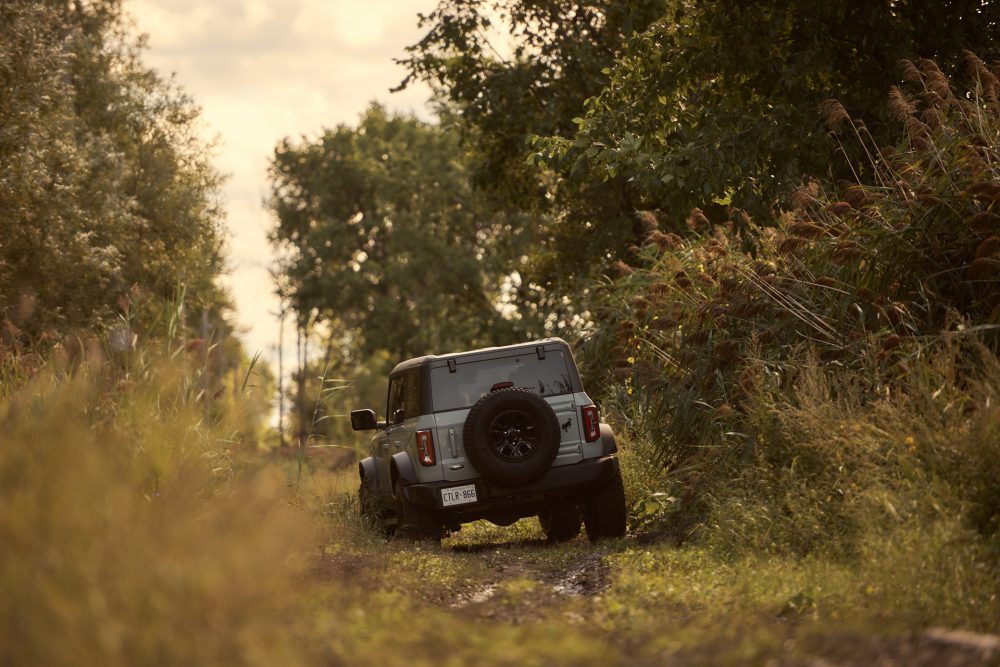 The 2021 Ford Bronco is arguably Ford’s most important vehicle in years, and with the level of capability and configurations Ford has thrown at it, it easily positions itself as the Wrangler’s greatest threat. Any flaws? I personally would have preferred a naturally aspirated engine in there for simplicity, and perhaps a plug-in hybrid variant like the Wrangler 4xe. But apart from that, it’s fair to say the Bronco has just hit the Wrangler hard in the gut. Let’s see how Jeep plans to fight back.