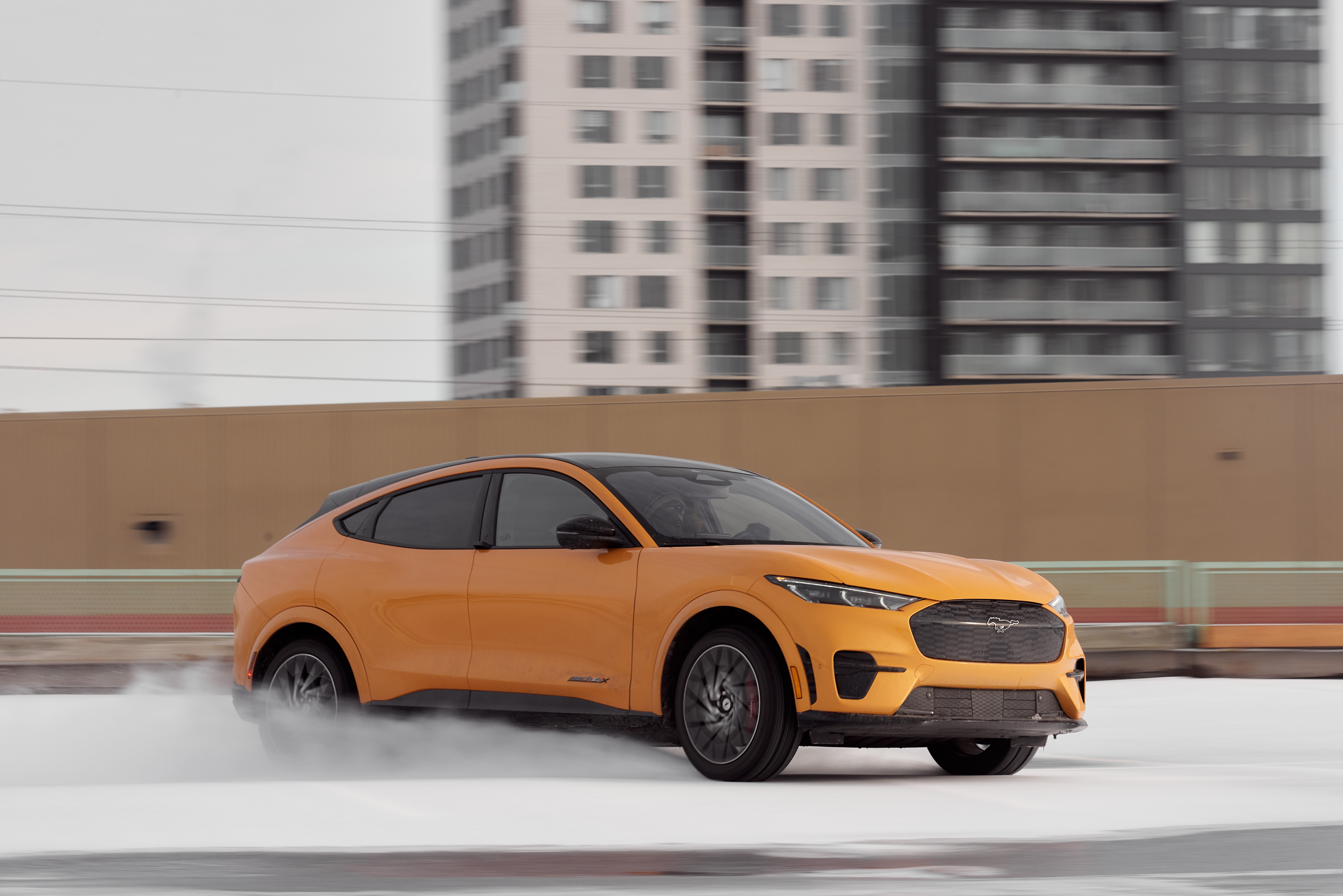 You guys already know what I think of the 2022 Ford Mustang Mach-E. But this is the GT, the high performance version that’s supposed to give the Tesla Model Y Performance a run for its money. Yes, it’s fast. As a matter of fact it’s only 0.2 seconds behind the fire-breathing Shelby GT500 in the 0-100 km/h sprint. That’s some serious performance, no matter which camp you’re in. There’s however a slight problem with the Mach-E GT’s execution of performance. 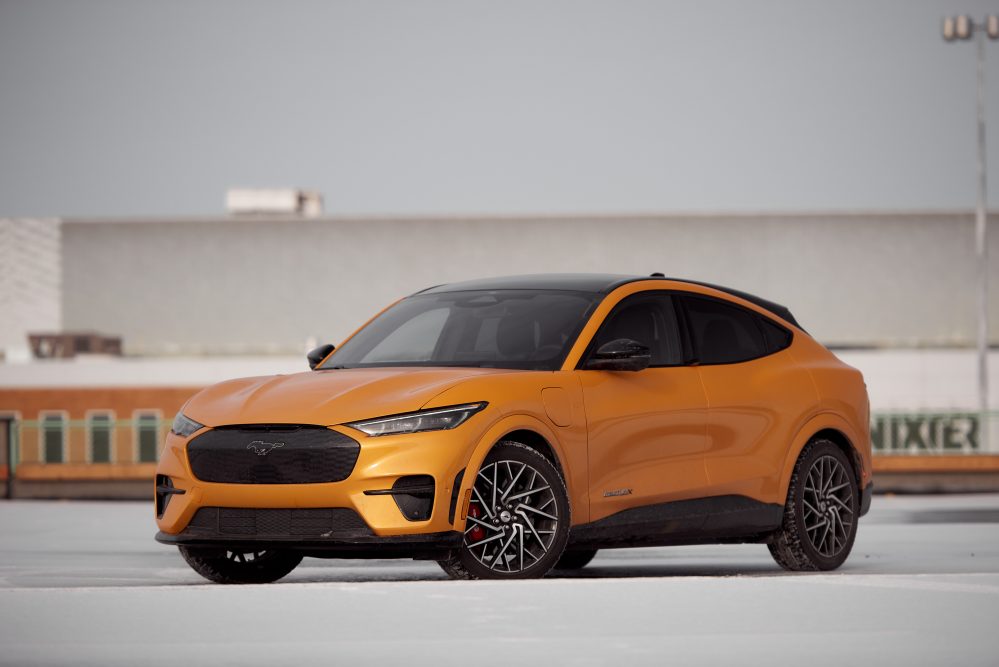 Visually, the GT represents the Mach-E’s full picture. Thanks to significantly better looking wheels, wider tires (my tester had winters), larger brakes and punchier colors, it looks considerably sharper than the standard car. Ŧhe entire front fascia is also different, with a more aggressive front bumper design and a blacked out fake grille. It looks rad as hell. 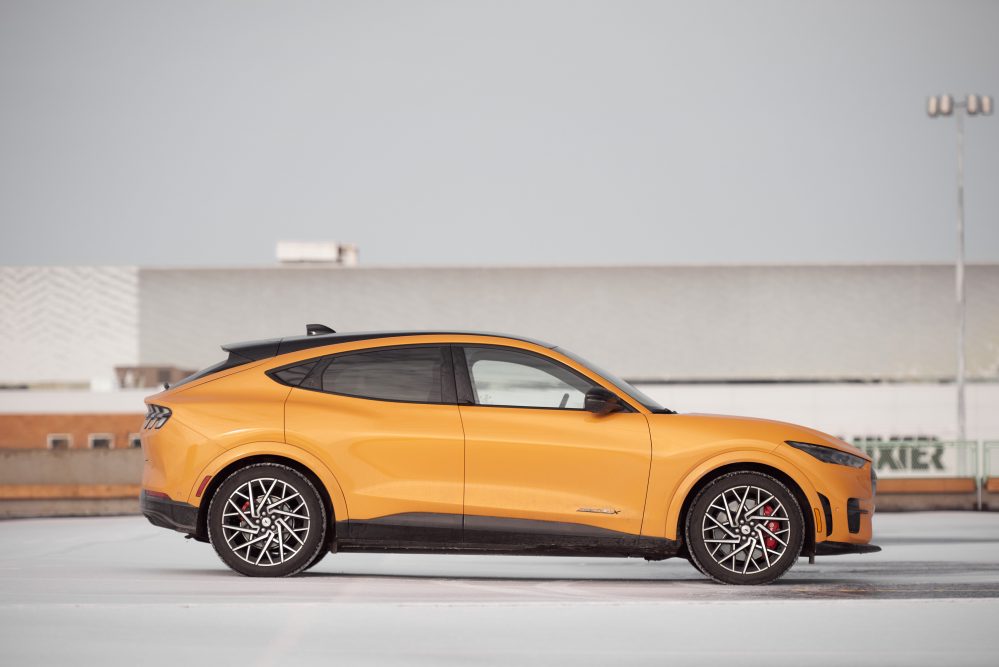 I have always liked the way the Mach-E looked from the onset, even if the standard car has skinny little tires. In this spec, it really got heads turning. The Cyber Orange paint job certainly helped attracting eyeballs. Notice how the top rear section of the roof is blacked out to accentuate a coupe-like profile? That’s just genius design. 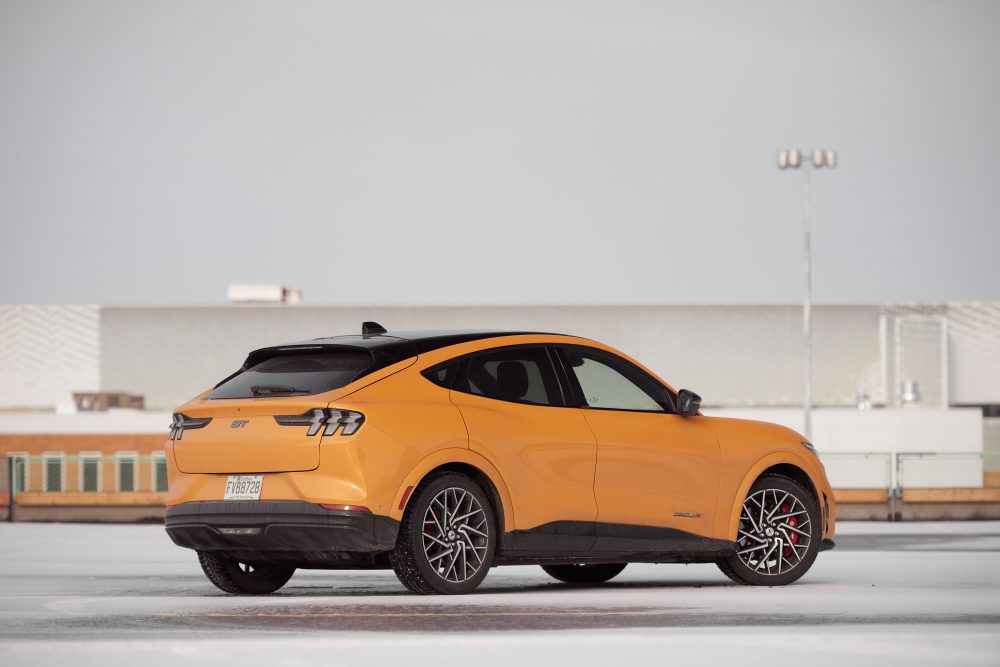 Essentially what makes the GT a more serious performance machine than the already super quick Mach-E is obviously more power from its two electric motors, but also an upgraded suspension equipped with Ford’s MagneRide adaptive dampers. There are also larger Brembo brakes. The interesting part is that the GT’s battery is the same 88-kWh unit what you can get in a regular Mach-E. The electric motors were just cranked to pump out more power and torque. 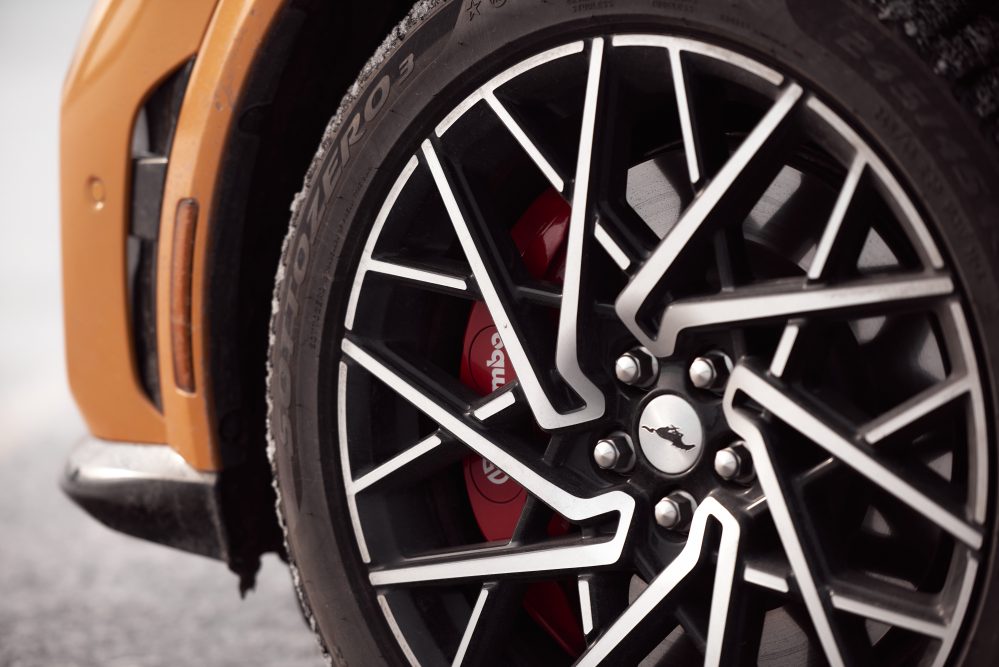 Combined output is therefore rated at 480 horsepower (up 134 hp) and a tarmac-destroying 634 lb-ft of instant torque (up 206 lb-ft). Thanks to dual-motor all-wheel drive, the Mach-E GT will launch out of the hole to 100 km/h in a brisk 3.6 seconds. That’s approaching supercar territory. Unfortunately, range takes a hit though due to the extra power. It drops down to 335 km (EPA rated) versus about 425 km for a standard Mach-E powered by the same battery. 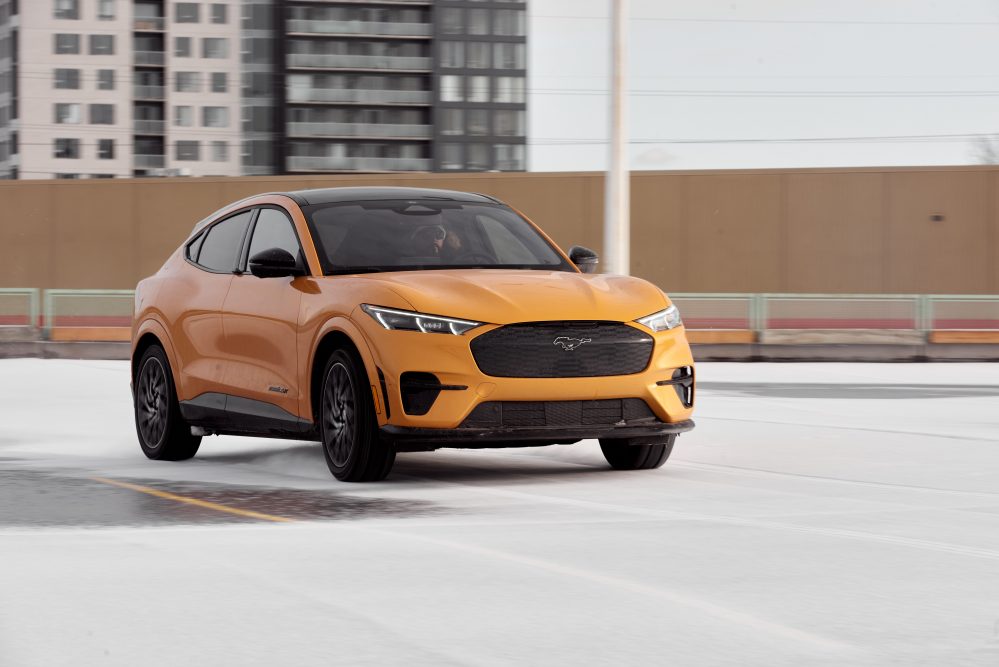 I tell you, there’s something rather amusing about obliterating an Audi RS5 with an electric car. I’m not the one who takes part in illegal street racing, but I did have a bit of legal fun with a fellow Audi driver out on the freeway. He didn’t really stand a chance when he tried to gun it. I basically warped ahead of him. 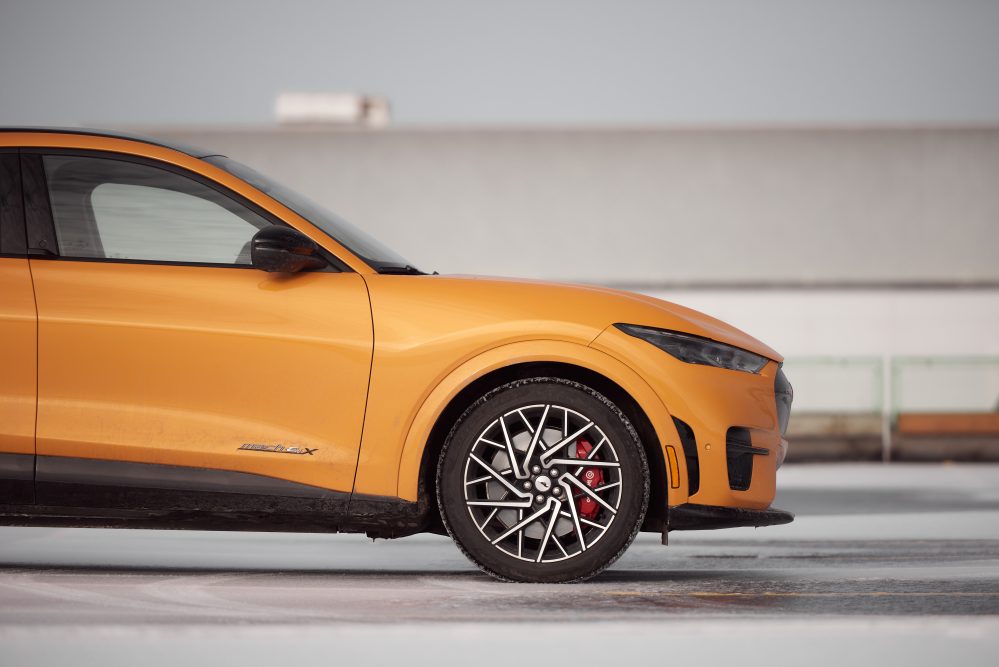 Stomp the throttle in the Mach-E GT from a standstill, and the only thing you’ll hear is the blood rushing to the back of your skull from the sudden G-forces. This thing is uber-quiet, yet it’ll rip a new one to must gasoline-powered muscle cars. There’s also good depth in the throttle pedal, allowing you to play with it and enjoy the massive torque generated from a super smooth motor. 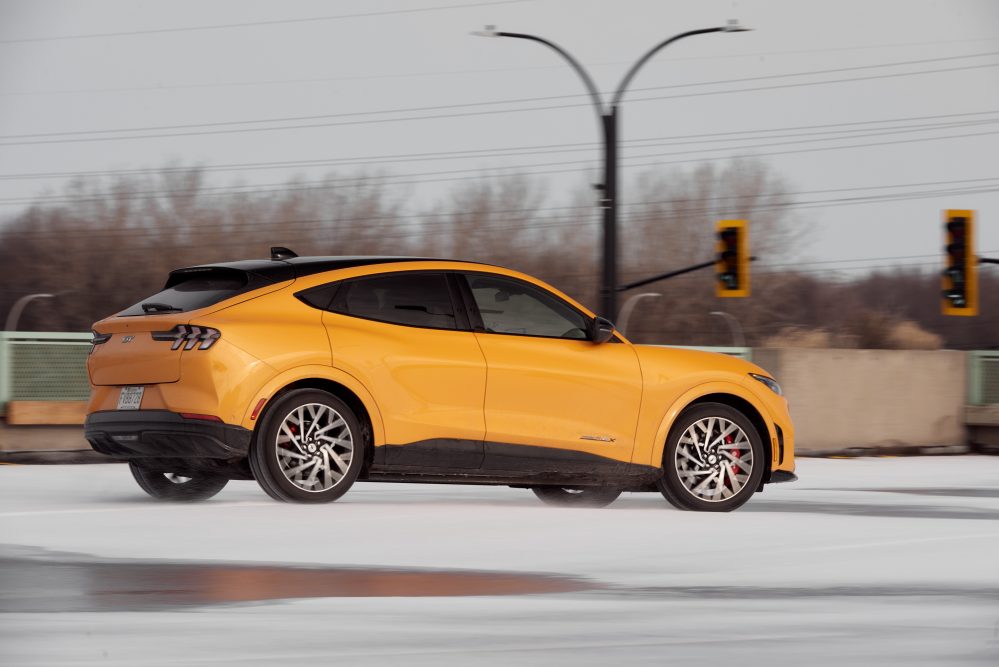 But fast electric cars come at no surprise. That’s what they excel at. What I wanted to test out was how this thing handled. Sadly, I had my Mach-E GT during a cold December week, meaning the road was loaded with snow, ice and salt. Winter shoes also prevented me from testing out the amount of grip this thing is supposed to generate. 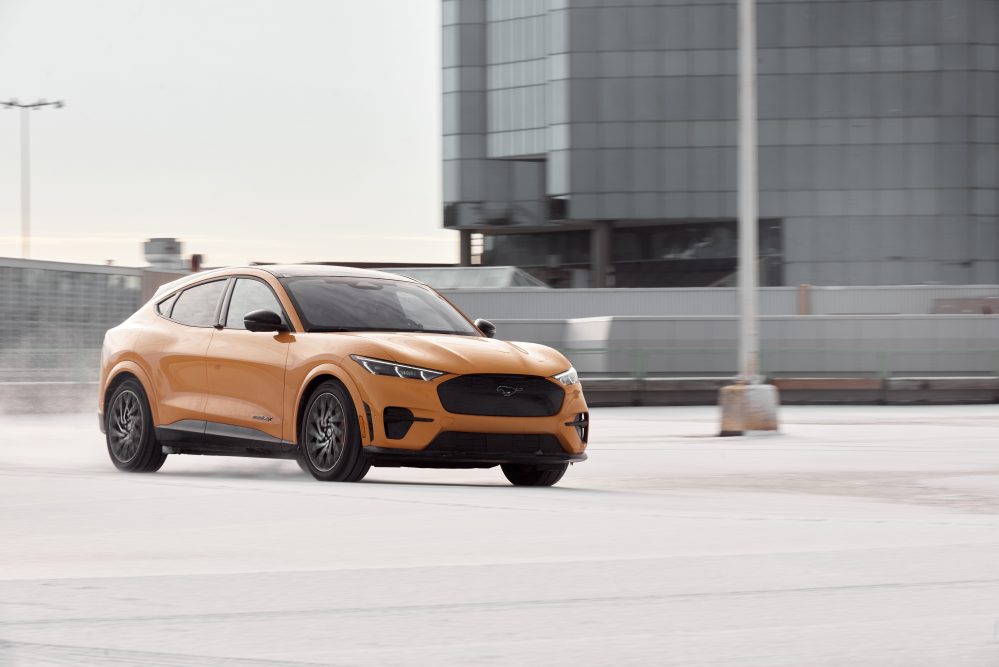 I did however sample the car’s upgraded suspension and brakes, which proved rather wonderful when throwing the Mach-E GT hard into a corner. There’s wonderful compliance from the way the dampers take in the hits, but also a tail-happy nature that’ll have you correct the steering a lot quicker than you’d anticipated it. The 2022 Ford Mustang Mach-E GT lets you turn off most of its driving aids, so it will slide, but there’s sadly always a fucking sissy friendly safety net to prevent you from having hardcore fun. 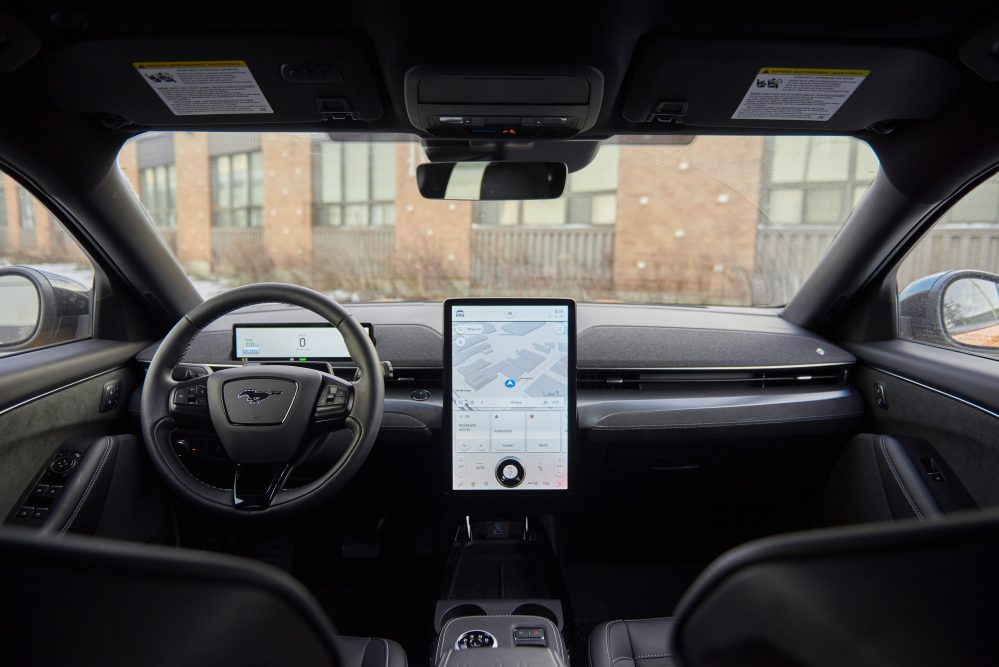 Keep the car underneath the nanny threshold, however, and you’ll be executing some glorious power slides. What’s great about drifting with an electric car is that you never need to worry about what gear you’re in, where the revs are at or how to modulate the throttle according to things like turbo lag or a lack of low-end torque. Because the electric motors are directly connected to the wheels, and because their power delivery is so direct, it’s far easier to maintain steady throttle input during the slide. There’s also much more precision from the throttle-by-wire system. 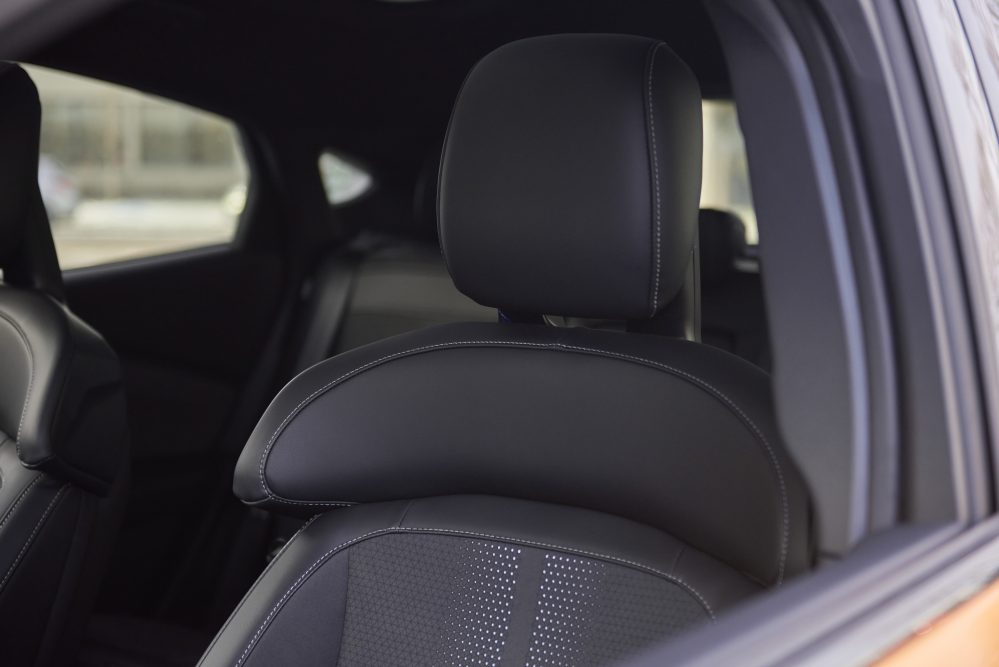 Fun, yes. Fast, hell yes. And absolutely good looking as well. But the entire time I was pleasing myself pushing this electric pony through its paces, I kept yearning for more. Somehow, it all felt disconnected and not as engaging as in a vehicle that’s running on gasoline. 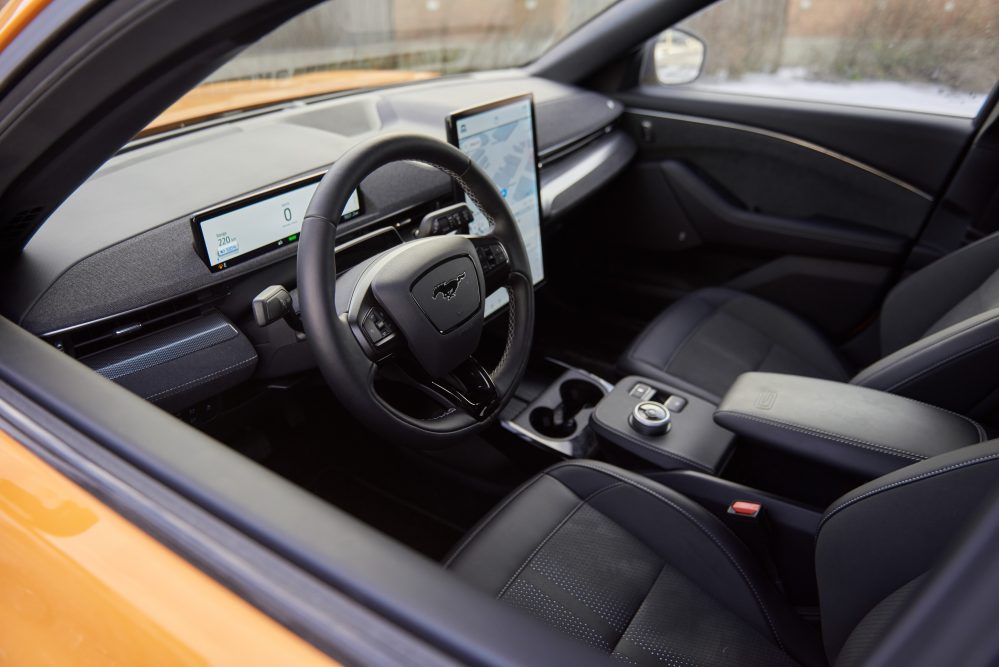 That’s when it hit me like a ton of bricks. Electric cars are super cool. They’re fast, quiet as hell, way more efficient than gasoline-powered vehicles will ever aspire to be and come with the added benefit of costing less to run and emit zero emissions on the road. But they have no character. No soul. 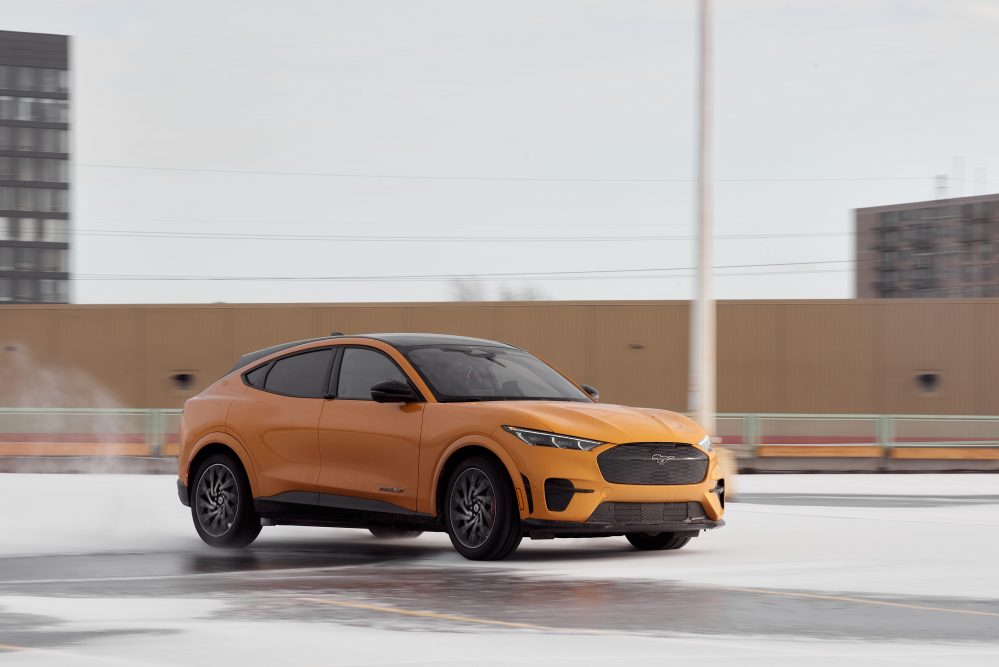 If you’re wondering what I mean by that, I’m going to try to translate it in the best of my automotive-enthusiast abilities. The reason we car junkies like cars so much and why young children hang car posters on their bedroom walls is because cars have always had human-like attributes. They make noises. They rumble. They squeal, crack, wine, clonk and honk. They smell, sometimes great, sometimes bad. They come alive when you turn them on, and go to sleep when you remove the key. And when you’re out there on a winding piece of tarmac, some cars will even talk to you as if accompanying you throughout your adventure. Cars are alive, like us. 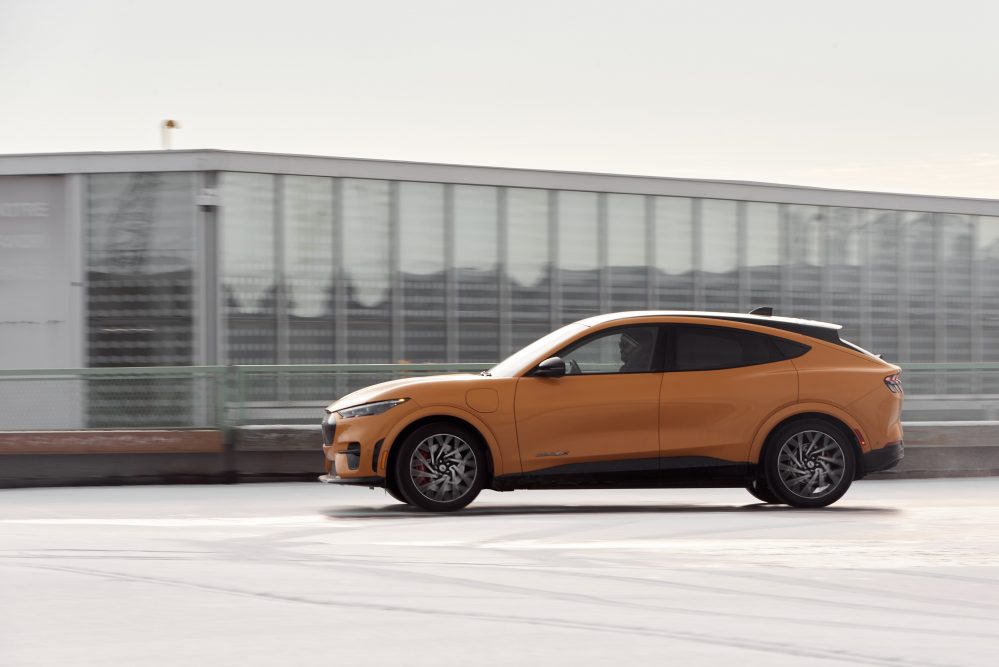 The problem with a car like the 2022 Ford Mustang Mach-E GT is that while it’s ridiculous fast and ungodly capable in the corners, it simply never feels alive. There’s no sound, no rumble, no huff and puff that conveys any form of character. Sure, the numbers are GT appropriate, but when you turn it on by pressing a button, it feels like a robot. You also can’t rev the engine to get your pulse going. It sings a cute little song instead to tell you it’s ready to go. And that’s lame. 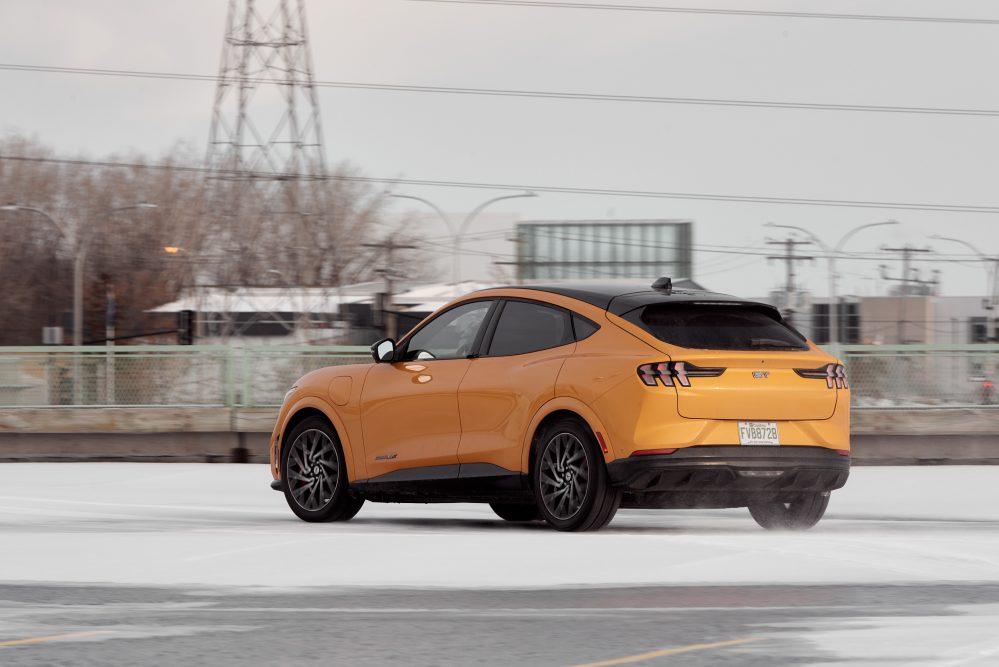 Allow me to finish this review with an interesting story. Last fall, I was driving the V8-powered Ford Mustang Mach-1, arguably one of the coolest Mustangs of the last decade. While I had the car in my possession, I hosted a family pool party. There were kids there. One of them,  my cousin’s 4-year-old son called Mackenzie, is absolutely in love with cars. Mack wanted to check out the Mustang. So we did, and after firing the super-loud 5.0-liter V8, I left the car on idle, pulled the handbrake and had him sit in the driver’s seat.

I then asked him to reach down as far as he could (the poor little guy was basically standing) and blip the throttle a few times. You should have seen the look on that kid’s face. It was at that precise moment that I knew I had unlocked something in his mind. He had tasted performance. He had heard it, smelled it. If this had been a Mach-E GT, none of that emotional experience would have been possible.