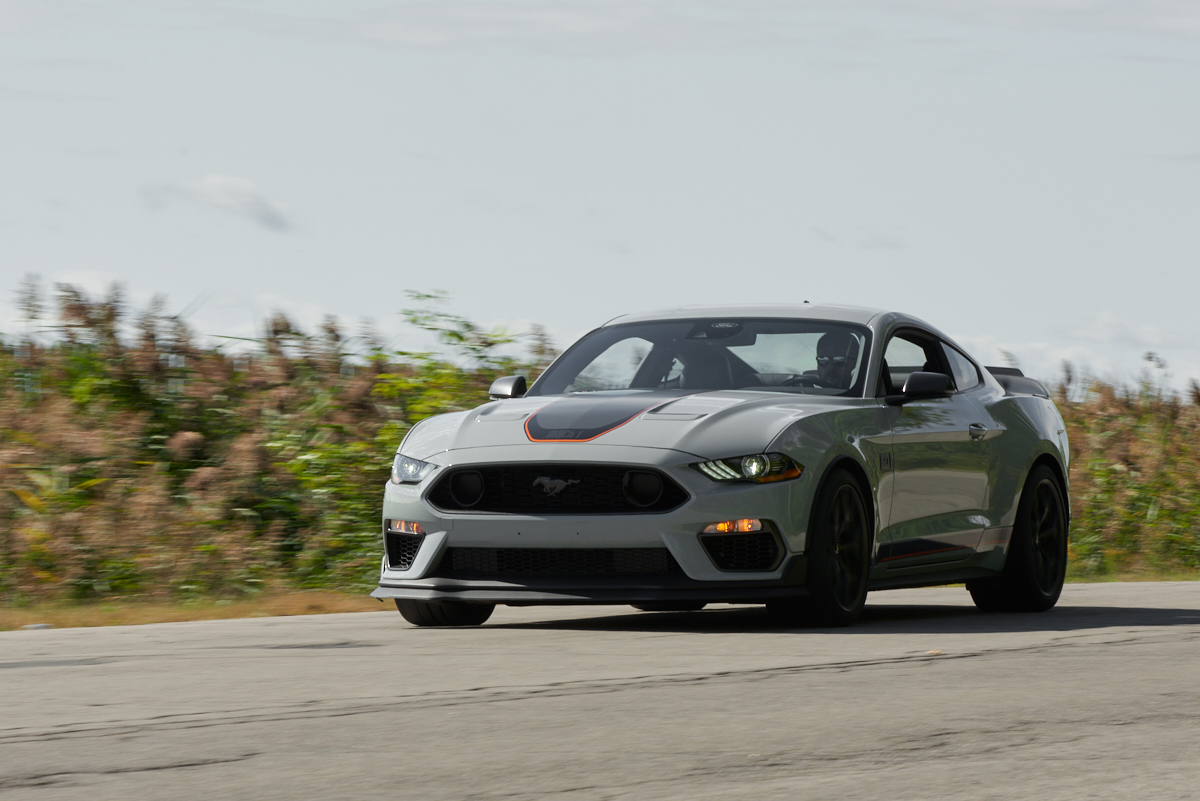 The 2021 Ford Mustang Mach 1 proves that Ford still understands what automotive enthusiasts want. It’s also a statement after discontinuing key models like the Mustang Bullitt, the Shelby GT350 and the Mustang GT‘s Performance Package 2 (PP2). Furthermore, after releasing an electric crossover called the Mustang Mach-E, Ford needed to do something to show it still cared about V8 performance. The Mach 1 is our redemption.

All The Good Bits 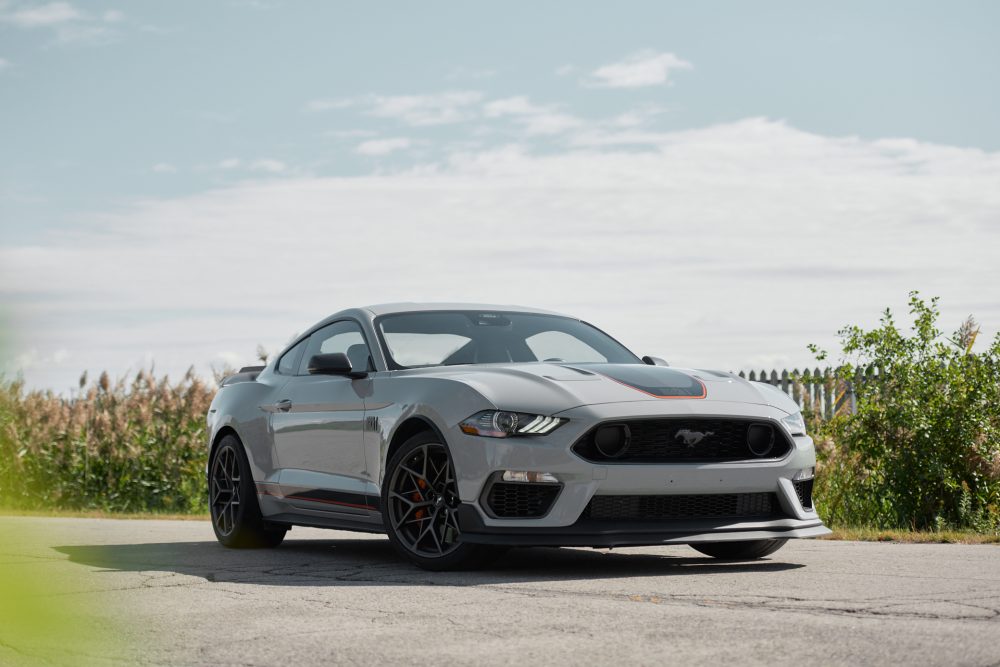 Yes, the 2021 Ford Mustang Mach 1 is essentially a glorified Mustang GT, but the combination of parts really allows it to come through as its own bespoke model. Like all special edition Machs that came before it, this is first and foremost a track-ready Mustang. It also fills the gap between the Mustang GT and the 760-horsepower Shelby GT500. 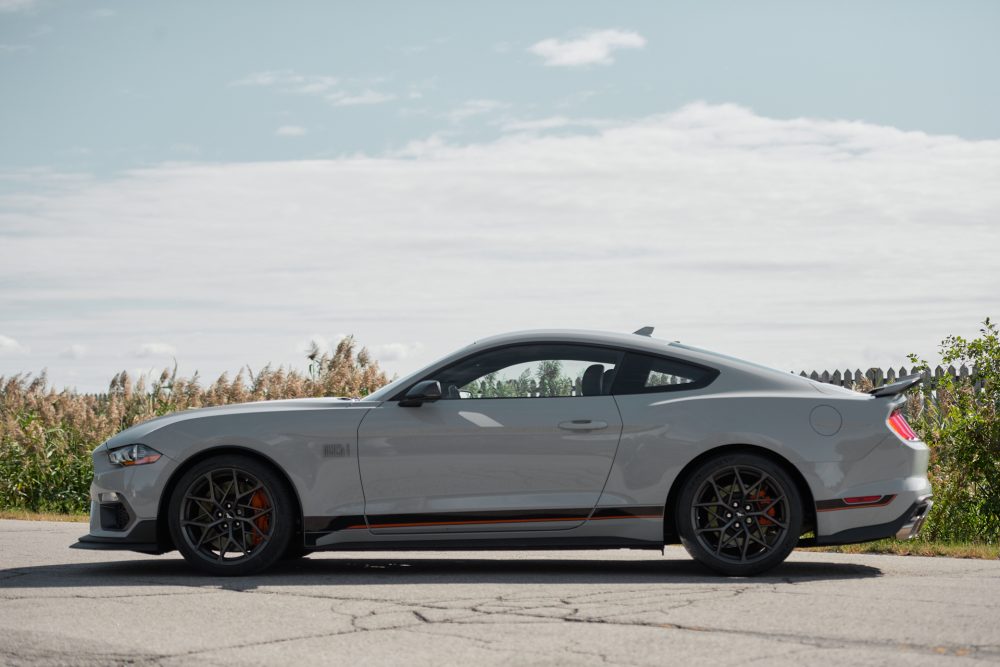 The Mach 1 gets the best parts from the GT, but also the Bullitt and the Shelby GT350. For instance, its engine is a 5.0-liter V8, not the Shelby’s 5.2-liter Voodoo unit. But it’s the Bullitt’s engine which cranks 20 horsepower more than a GT. 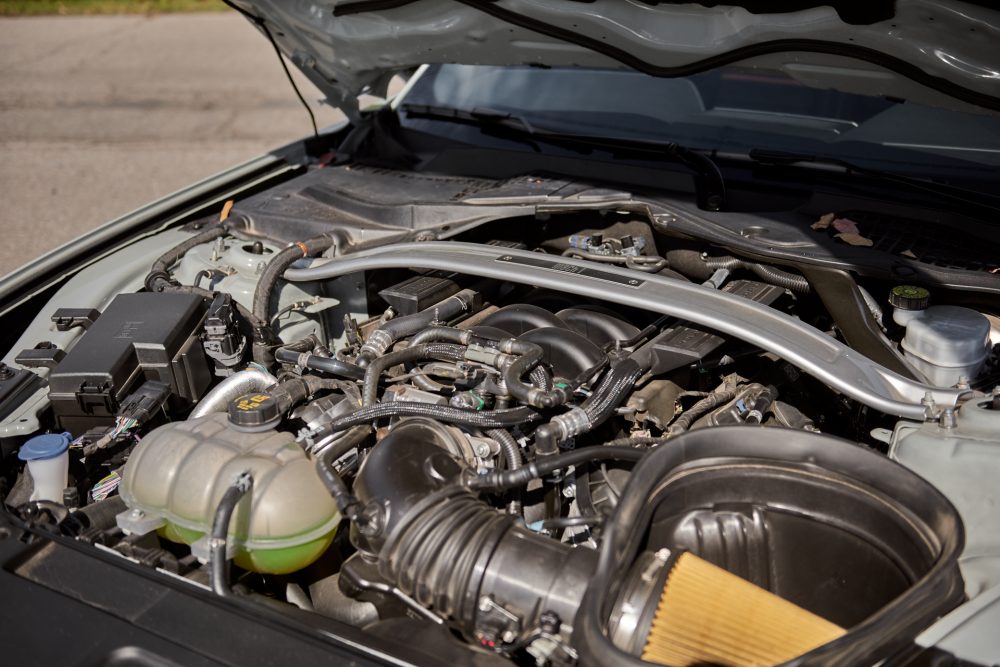 The Mach 1 is therefore rated at 480 horsepower, with torque remaining unchanged at 420 lb-ft. This also means the Mach 1 inherits the Bullitt’s trick exhaust system that was carefully tuned to create a unique soundtrack. In other words, this thing sounds gnarly as hell. 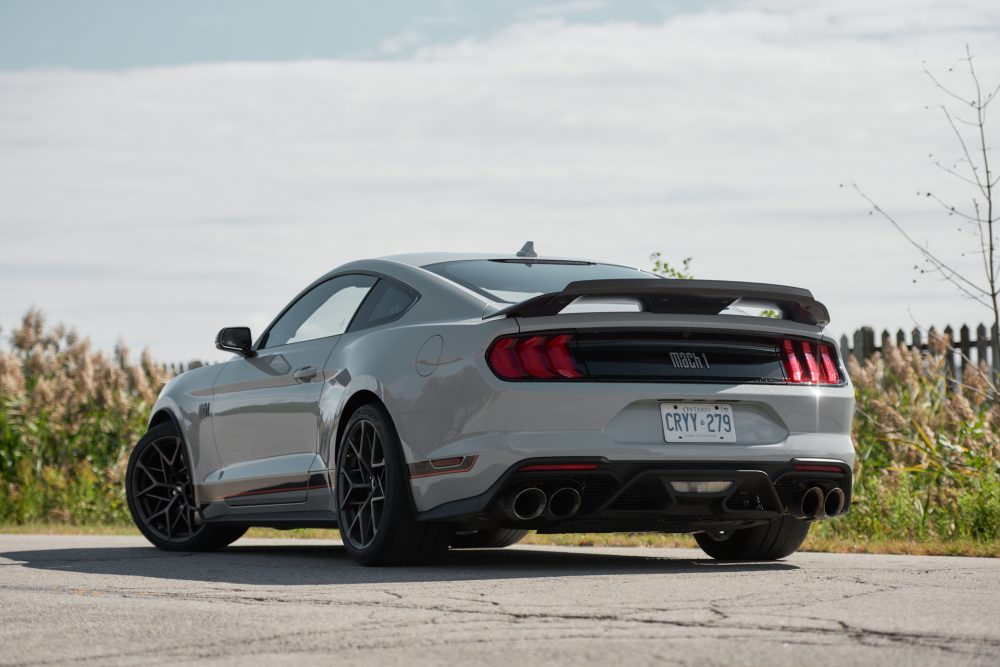 Then there’s the transmission. Obviously the Mach 1’s default setup is a six-speed manual, but it’s not the GT’s usual Getrag setup. No, the Mach 1 comes standard with the beefier Tremec TR-3160 gearbox, taken straight out of the Shelby GT350. Ford then bolts the Bullitt’s kickass cue ball shift knob on top of it. Yes, you can get your Mach 1 with a ten-speed automatic, but who the hell would do that? Jay Leno, apparently. 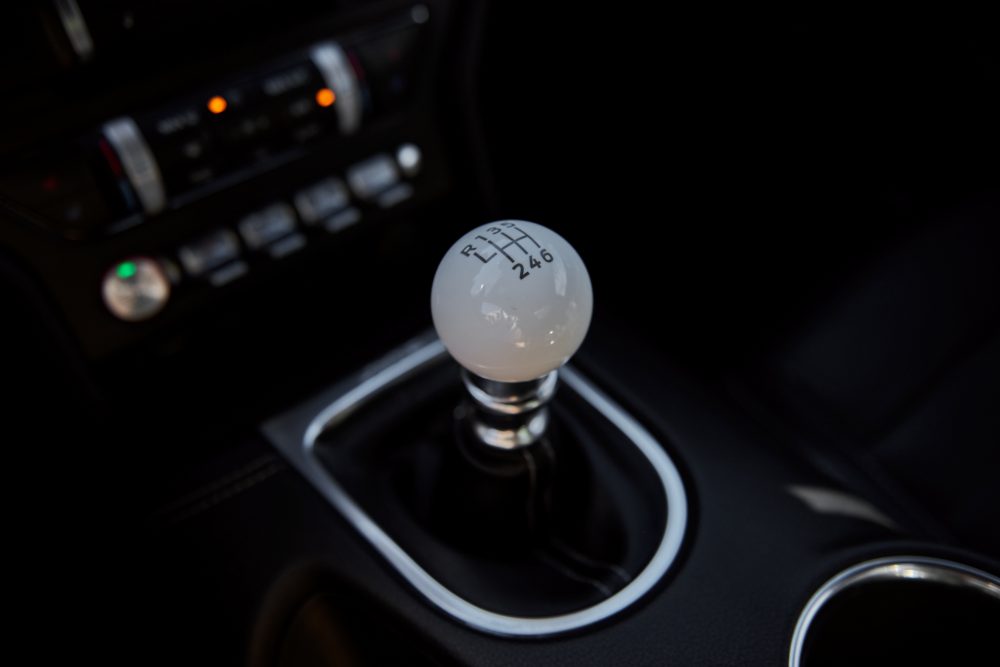 There’s more cool stuff too: the flywheel and the clutch (in manual cars) were also sourced from the GT350. The Mach 1’s suspension is bolted onto the Shelby’s front and rear subframes. Neat hunh? It also comes standard with Ford’s magnetorheological adaptive dampers which change their stiffness according to the available drive modes. Finally, the Mach 1 is instantly recognizable due to its badging, front lip, side skirts, and model specific paint jobs. 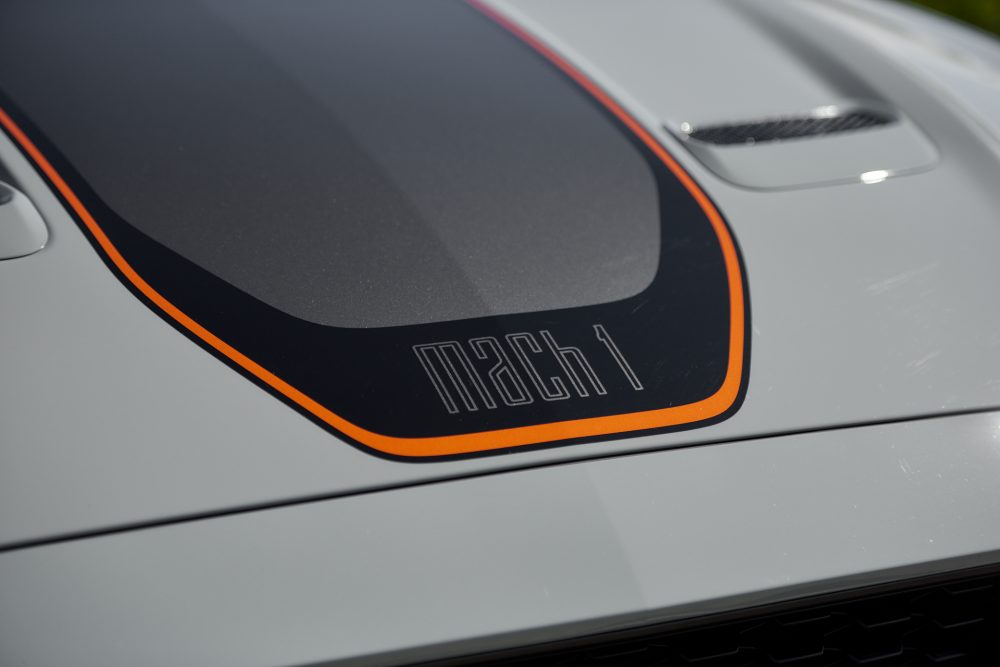 My tester had the much recommended Handling Package ($4,500) which adds even more cool shit, things like a set of unique 19-inch wheels wrapped around Michelin Pilot Sport Cup 2 tires and a rear decklid spoiler complete with a Gurney flap. My car also had the sick black and orange Mach 1 livery. Final price for this naughty girl was $77,700, or about the same price as the old Shelby GT350. 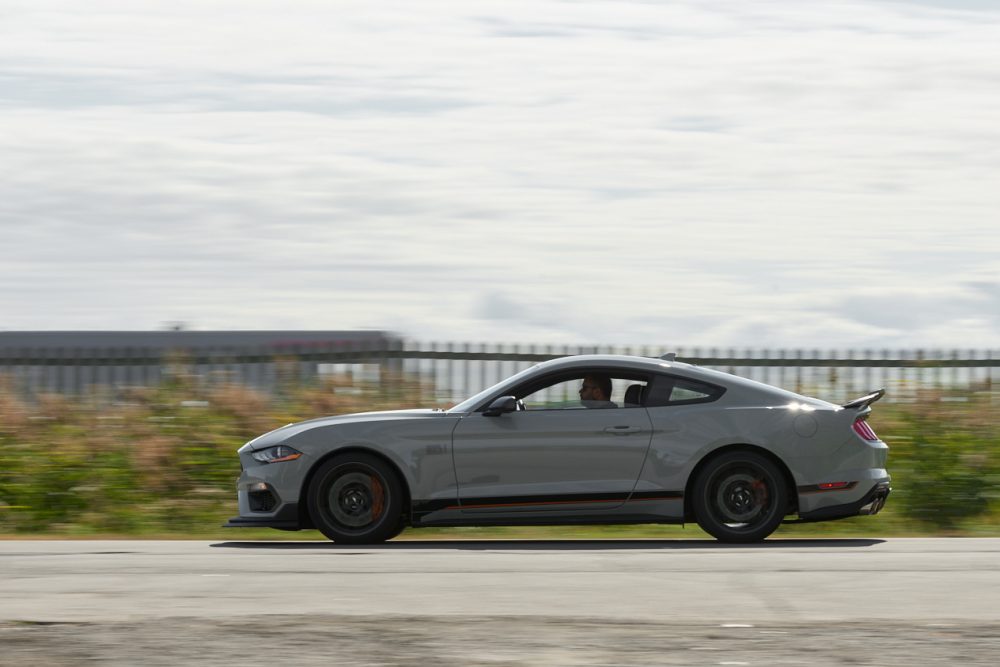 Wishing for a no nonsense driver’s car isn’t always a good thing. I mean, yes, I’m tremendously grateful the 2021 Ford Mustang Mach 1 even exists, but I’m also disappointed by how much it’s a handful to daily drive. 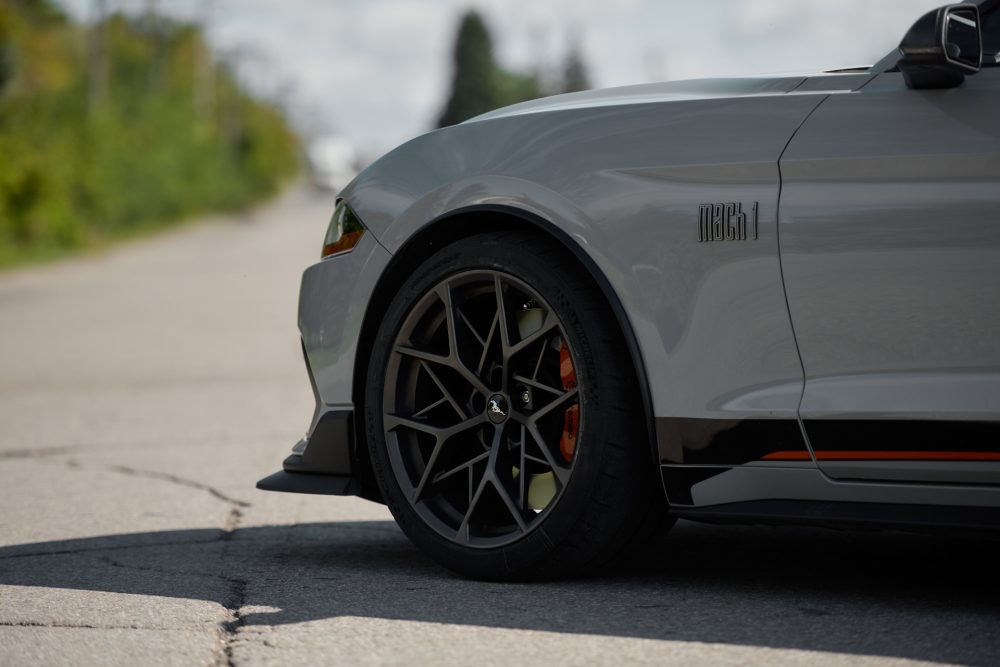 One of the reasons for that is its 305-wide front performance tires – yes 305! – which means the car is constantly tramlining on beaten roads. The problem is that where I live, in the province of Quebec, the roads are always shit. So the Mach 1 is NOT enjoyable to drive casually. The moment you let go of the steering wheel, the damn thing throws you violently into the other lane. This means the second you’re not paying attention, it tries to kill you. 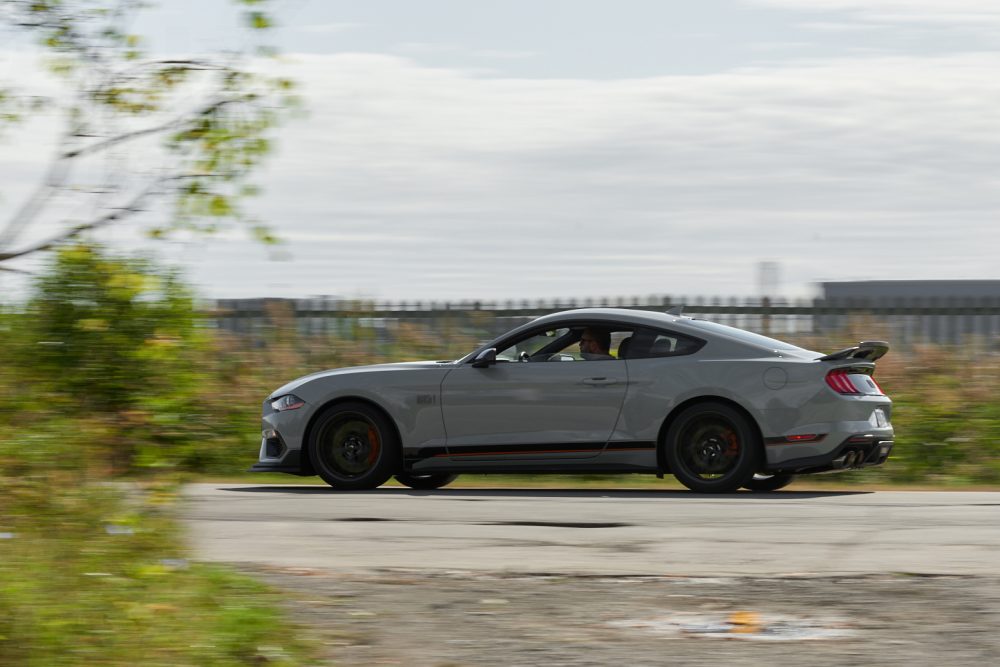 Then there’s the noise the fuckin thing makes at full throttle. Don’t get me wrong, I enjoy a sonorous soundtrack more than the next guy, and boy does the Mach 1 sound glorious. But you don’t always want your car to sound like a Nascar storming down Daytona 500. When I crawl down my street at 5 in the morning, a place where young families reside, I’d prefer not being labelled as the neighborhood’s douchebag asshole. 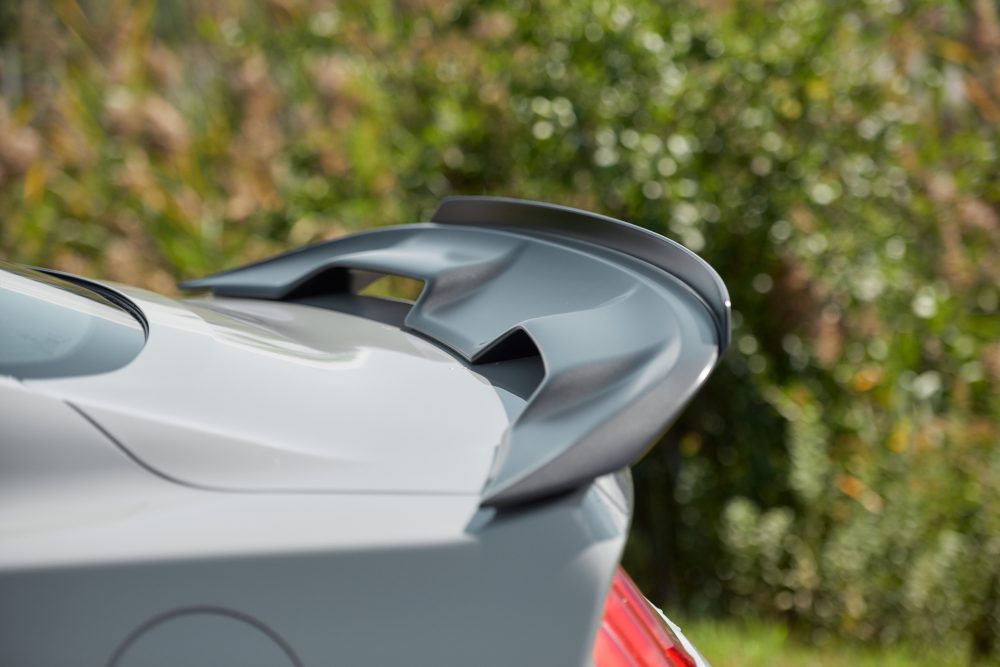 Luckily, Ford has installed a “Quiet” mode, like it offers on a Mustang GT. Accessing it is ridiculously complex due to the gauge cluster’s unintuitive menus. The thing is, even when Quiet mode is turned on, the Mach 1 is still annoyingly loud. You essentially choose between a loud exhaust, or a very loud exhaust. 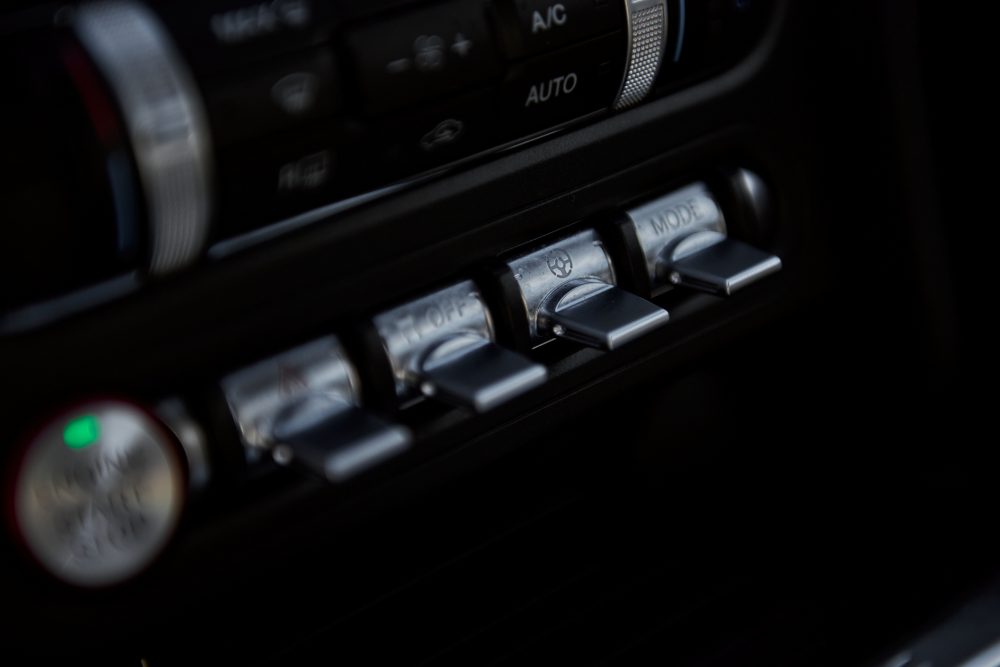 All of these pitfalls do eventually dissolve the moment you find a clean piece of tarmac with nobody around. Launching the Mach 1 only requires you to be gentle with the throttle as its rear racing tires provide buckets of grip. Once everything is nailed properly to the ground, the Mach 1 launches forward with much anticipation. 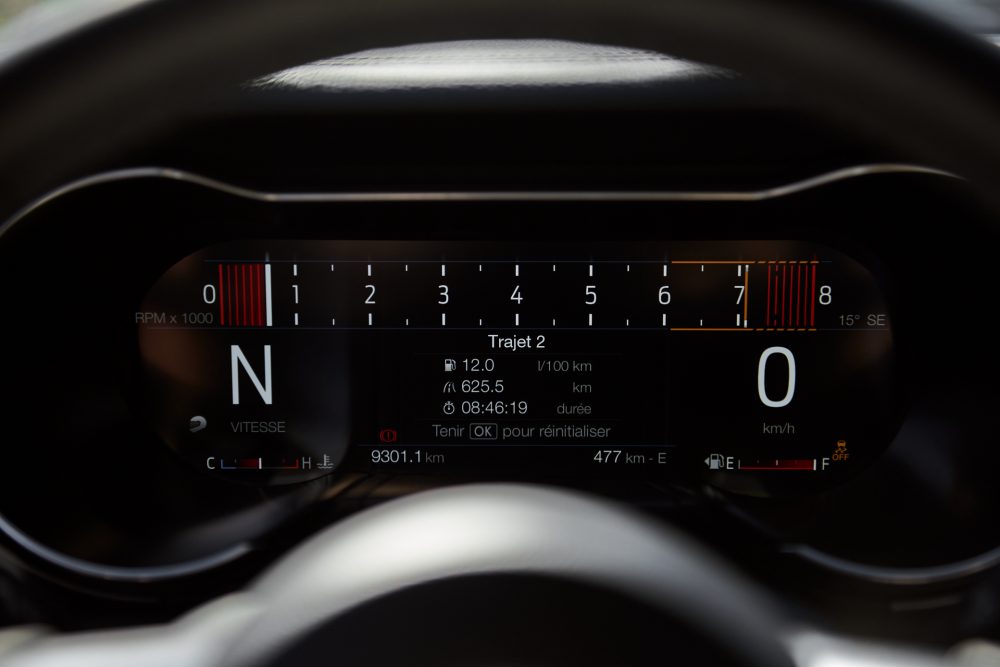 The racing flywheel means the five-point-oh revs quickly and acts as though it wants to leap out of the hood the moment you drop a gear. The shorter ratios from the Shelby’s gearbox also lead to much more visceral accelerations, while the intoxicating sound of the Bullitt’s exhaust instantly motivates you to break the law. 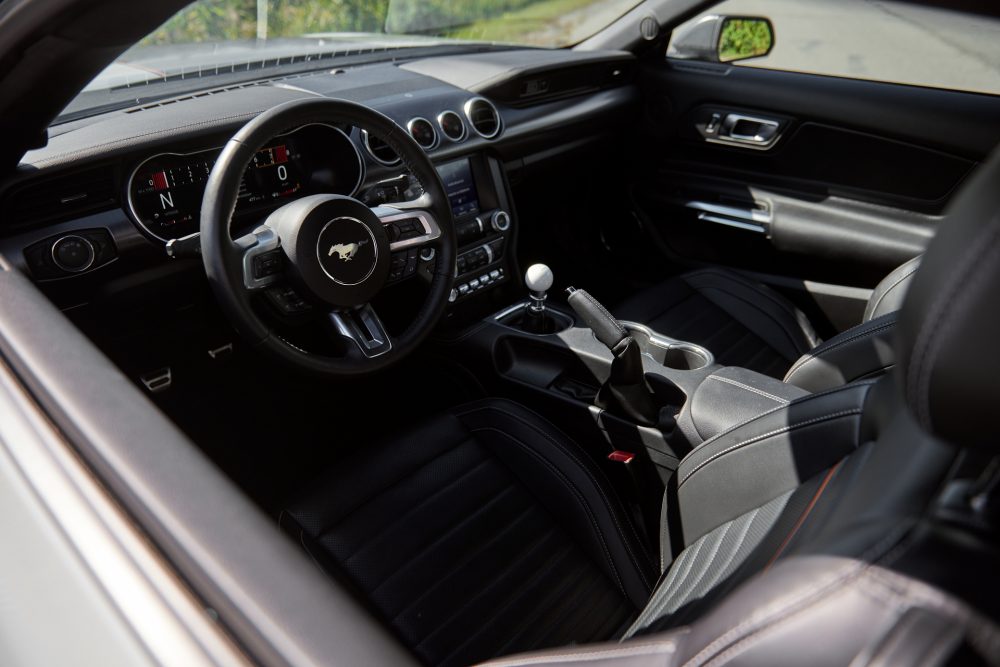 The Mustang is a big car. The way you sit low in its cabin, pulled all the way back on its rear wheels with a long hood ahead of you makes it an intimidating machine to drive. But the suspension’s damping, the way its chassis was reinforced and calibrated, as well as the amount of endless grip the tires provide, quickly put you at ease. 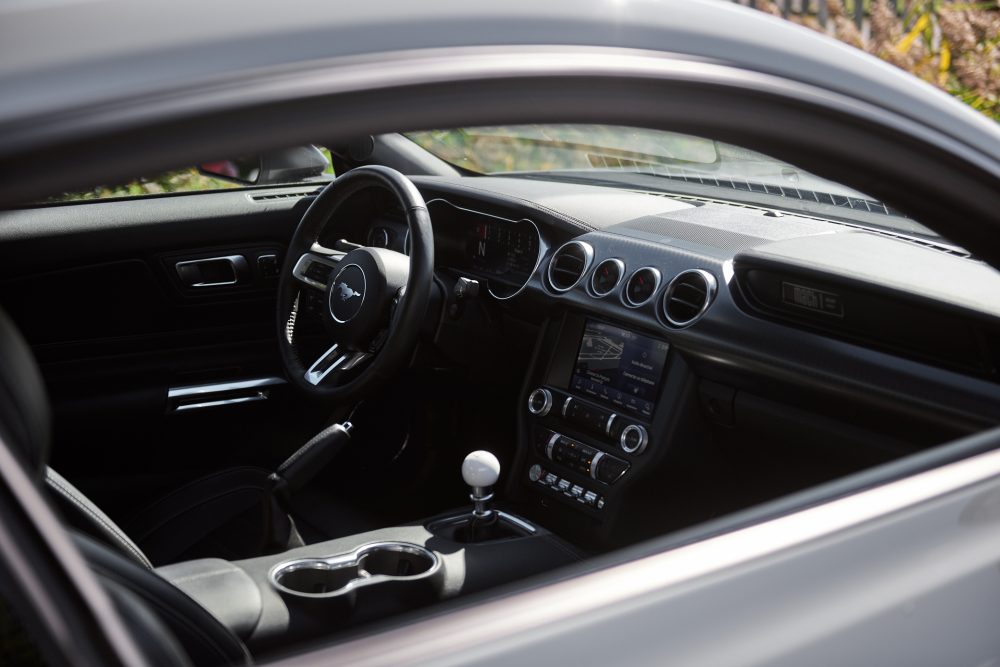 You can push the Mach 1 to the limits of its capabilities without necessarily being afraid of dying. And the entire experience is extremely addictive along the way. The next thing you realize is that you’re out of fuel, yet, you’re still thirsty for more. These are symptoms only true driver’s cars can inflict. 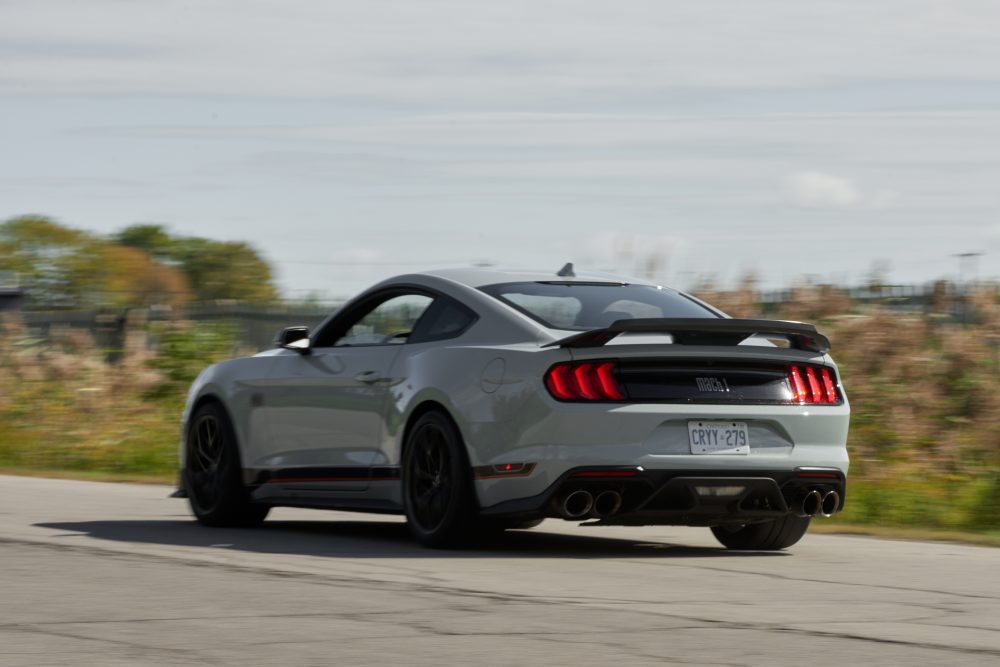 It’s fair to say that with the 2021 Ford Mustang Mach 1, Ford wanted to send a clear message to performance junkies, that it has not given up on them. It also proves how well Ford masters performance, and that the Mustang, in its original V8, rear-wheel drive form, isn’t going anywhere anytime soon. This is the kind of car we automotive enthusiasts love ranting about in internet comments. So please, be thankful it’s currently sitting in a Ford dealer. And if you do go out and buy one, do us all a favor and get yours with a stick.