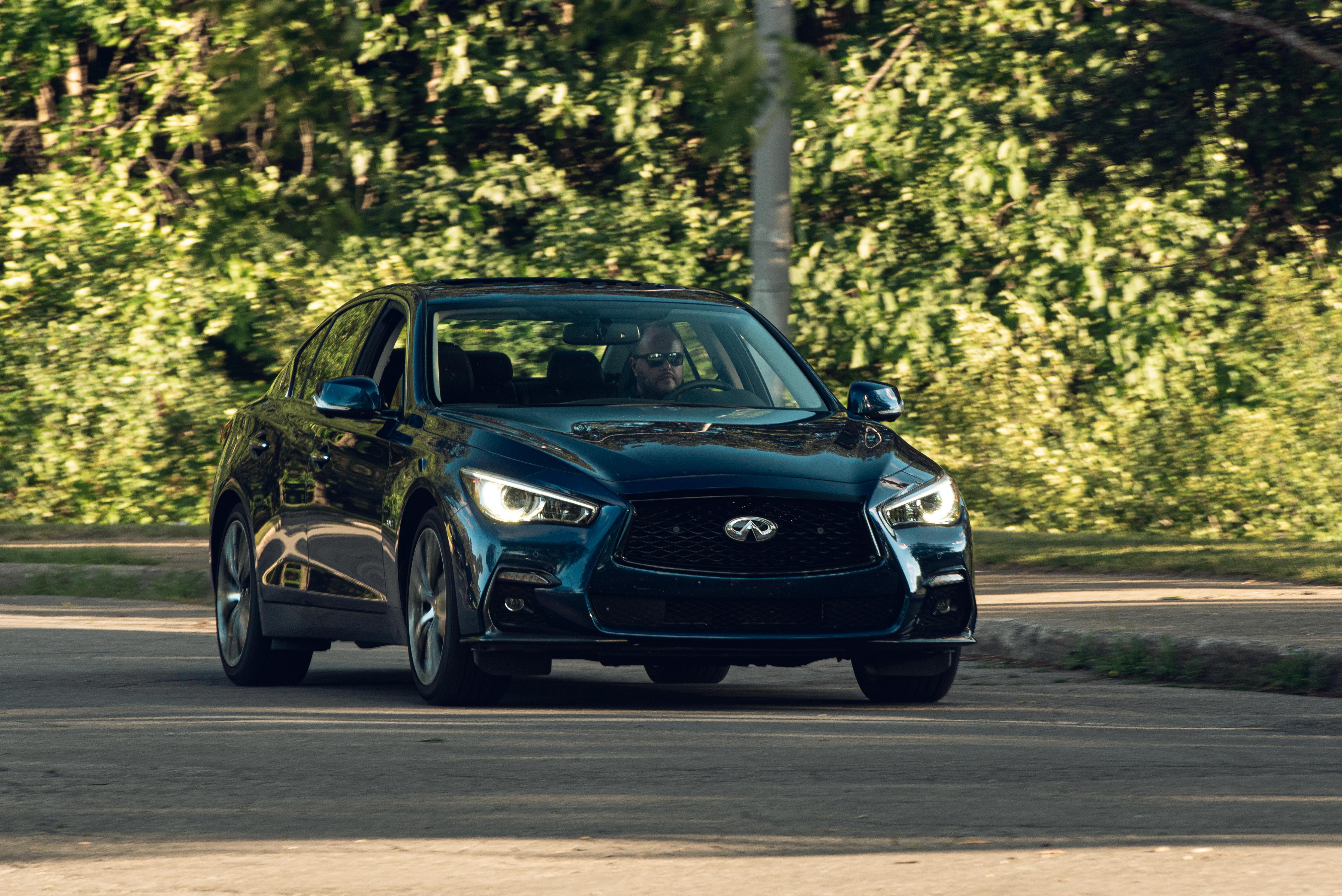 I’m sure the 2020 Infiniti Q50 S makes you wonder why you would get one instead of anything German. That’s what everyone is thinking actually.

The truth of the matter is that the luxury sport sedan segment is so vicious right now that if your product isn’t spectacular, it simply dissipates into the competition’s mist. The Q50 is not a bad sedan, but it lacks the instant desirability of European and even South-Korean offerings. Even with an aggressive price tag and heavy incentives, the poor Q50 sadly misses the mark in many areas.

Still Got The Looks Though 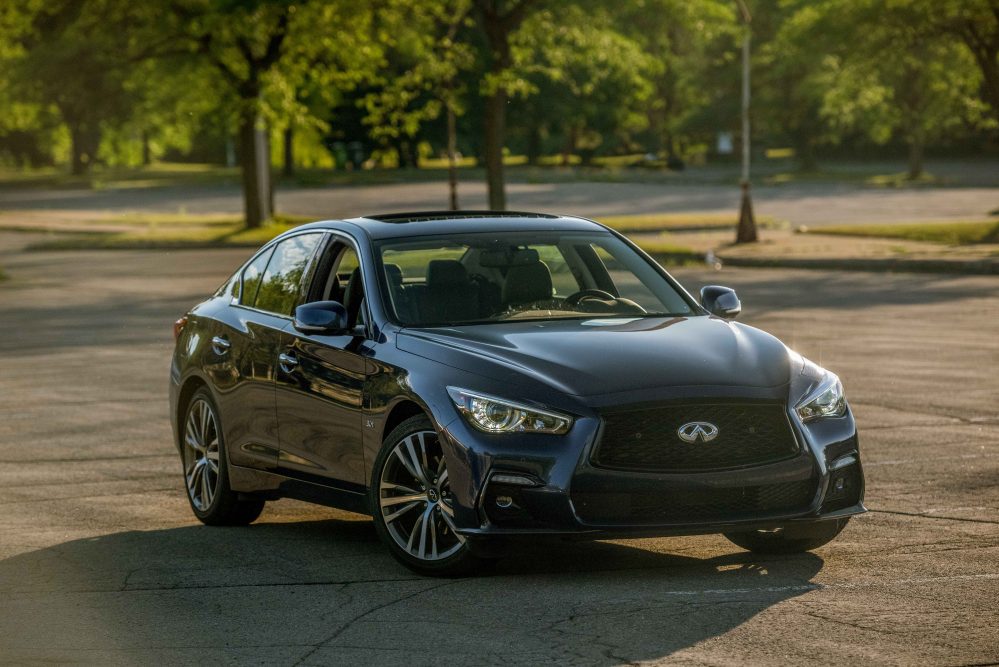 Look, it’s easy to go down the “competition is better” narrative when talking about the 2020 Infiniti Q50. It’s becoming so overdone it has transformed into one of the most cliché ways for automotive journalists to review this vehicle. But it’s also hard to deny it. 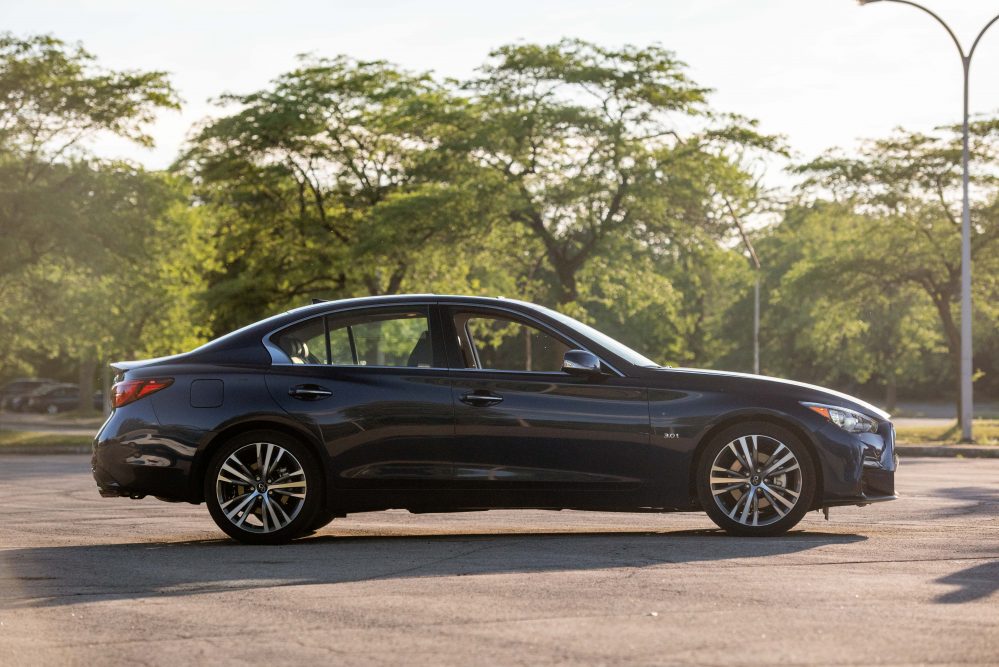 Yes, it’s true that the Q50 is outpaced by the Germans, but it’s also not sold at the same price point. If you compare it to what it’s actually up against, i.e., the Acura TLX, Lexus IS, or even the Jaguar XE, the Q50 is frankly still doing alright. That’s until you consider the overachieving Genesis G70. 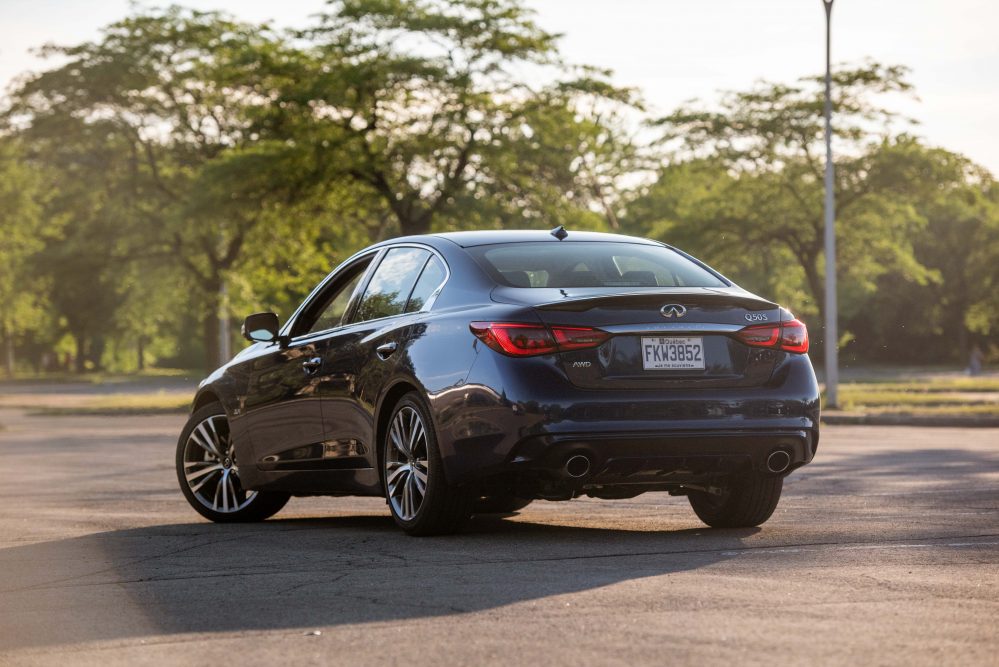 It’s also important to underline that Infiniti is pretty much dead at the moment. Nissan seems to be restructuring everything right now, so perhaps we’ll soon see a rejuvenated Infiniti, but as I write this, not much is going on at Nissan’s luxury division except for a lineup of clumsy crossovers. The QX50 compact SUV is alright, until you consider a much better Acura RDX for similar money. 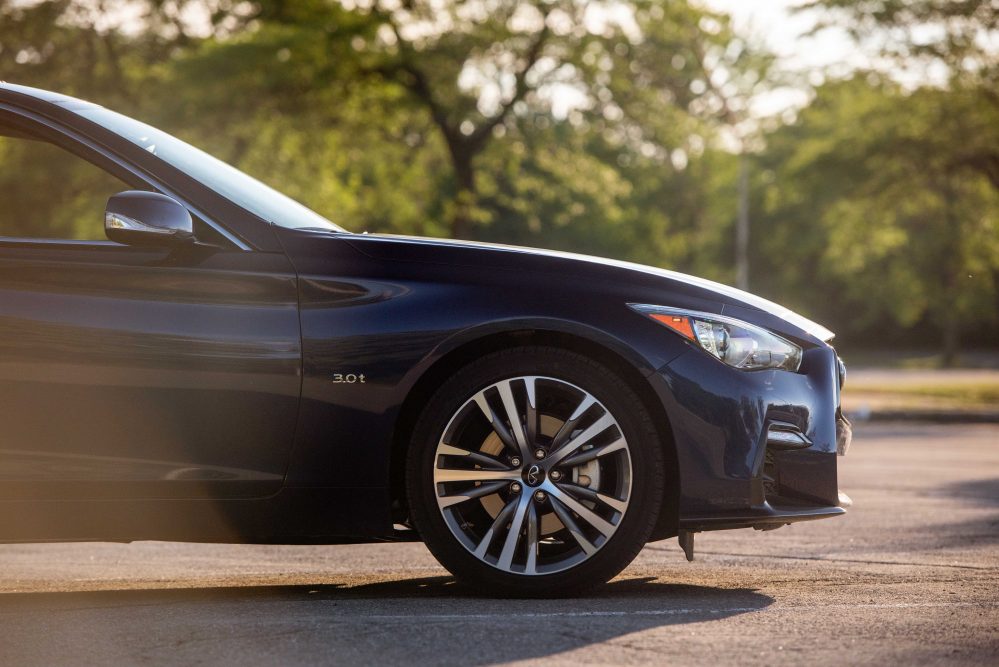 The Q50 – and the Q60 coupe – however, remain at the core of the Infiniti nameplate as they hearken back to the brand’s glory days when it introduced the G35 at the turn of the millennium, a time when Infiniti was actually dishing out revolutionary and competing products. The Q50 is the last remaining relic of that era, which is why I believe it remains an interesting automobile. 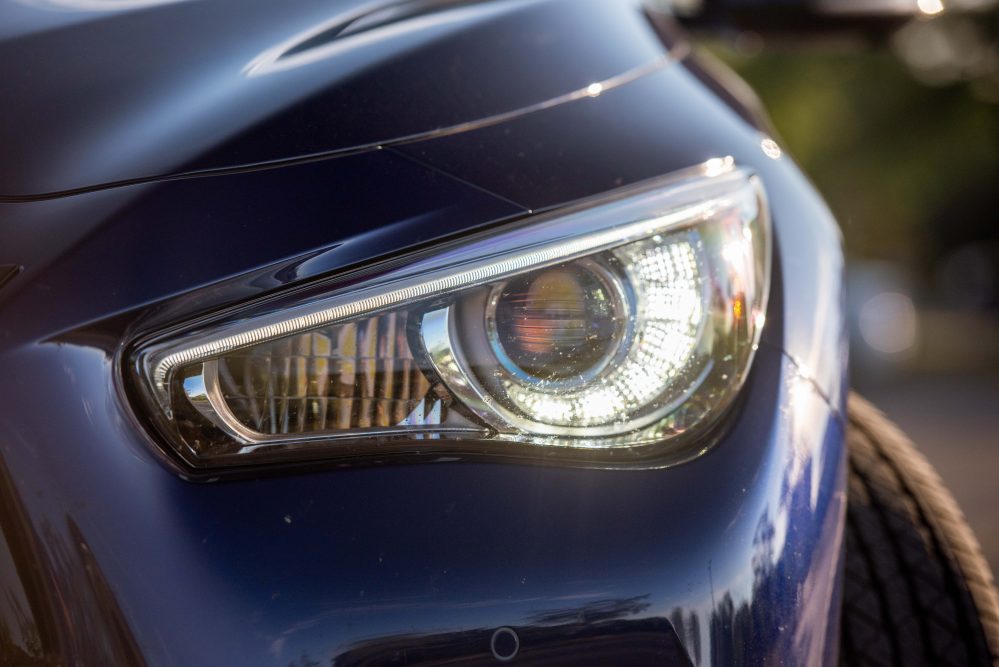 I’m going to come out and say that I have always had a soft spot for this car. I find it attractive, especially with this blacked out grille and Iridium Blue paint job. It has curvy, organic lines, looks classy and sporty all at once. The front fascia reminds me of, dare I say it, a mini Nissan GT-R, which I quite like. 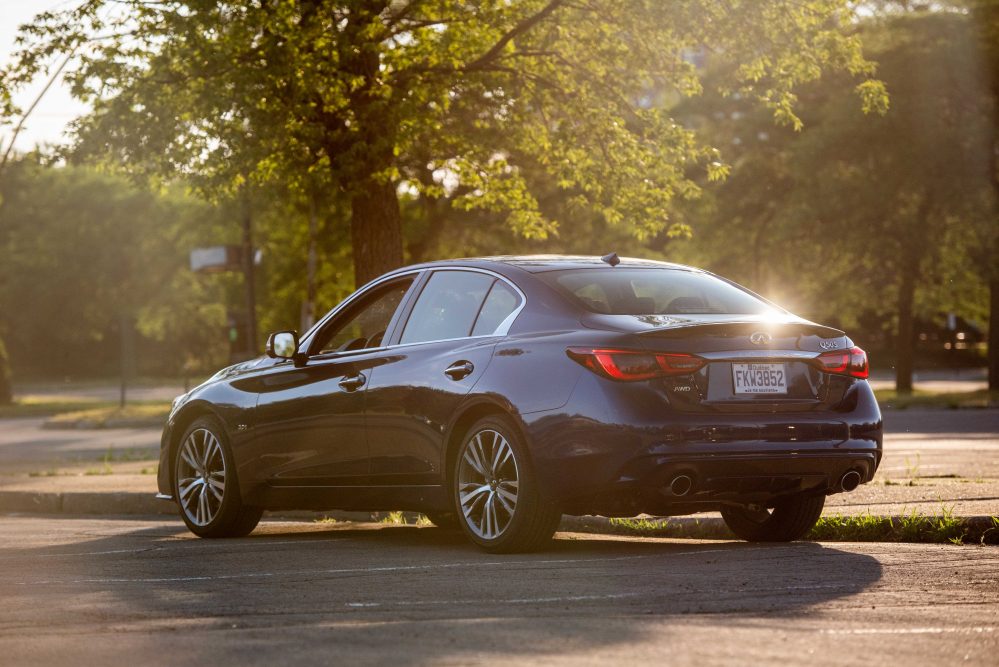 And it’s not just the way this car looks that reminds me of Godzilla, but the way it’s built. For instance its architecture is a heavily revised version of the same FM platform that underpins the GT-R, but also the Z and that old G35 we loved so much. It’s the kind of stuff that makes car junkies weep. While showing age, this architecture remains to this day one of the best platforms Nissan has ever developed, and it still performs well today. 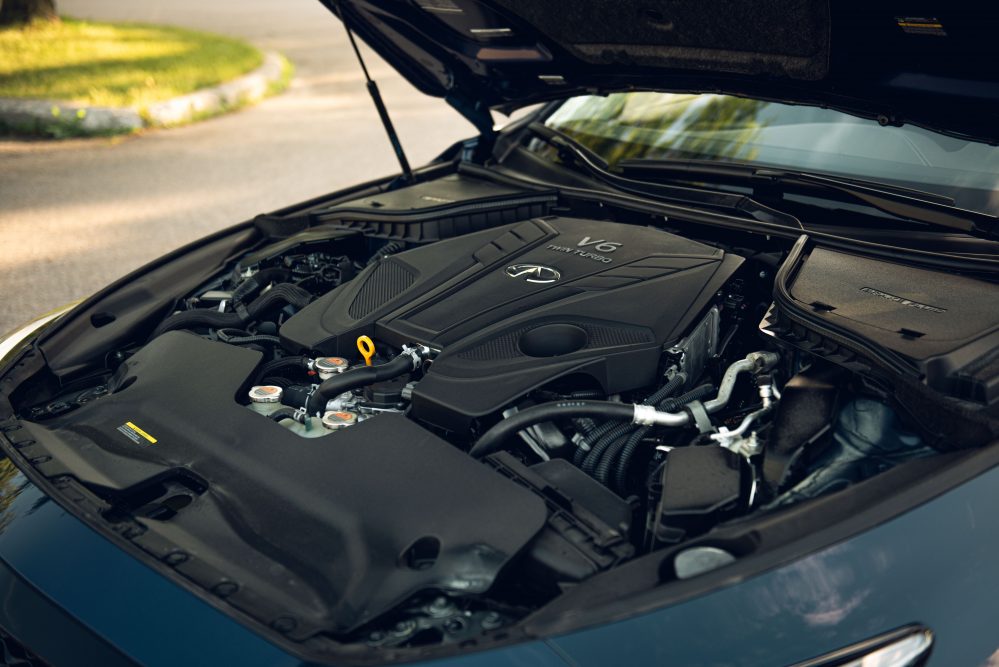 Power is also a Q50 strongpoint. For 2020, the only engine available in Canada is a 3.0-liter twin-turbo V6 good for 300 horsepower and 295 lb-ft of torque, which gives the Q50 a slight performance edge over an Acura TLX and Lexus IS, allowing it to launch out of the hole to 100 km/h in about 5 seconds flat. All-wheel-drive is standard over here,  as well as a seven-speed automatic transmission. There’s also a Red Sport model that cranks things up to 400 horsepower and 350 lb-ft of torque. 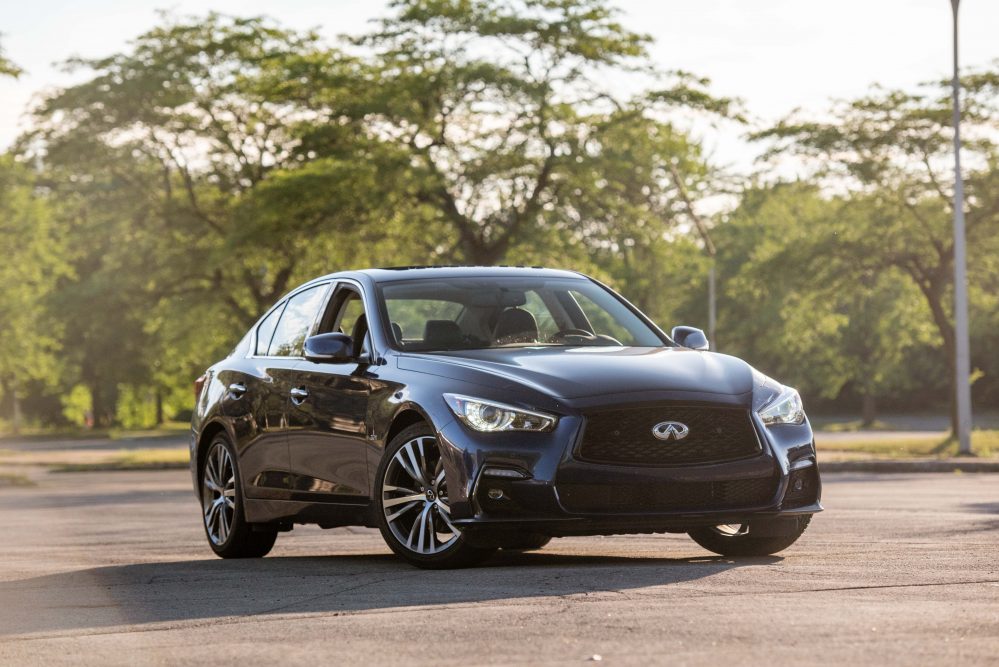 The car you see here is the 2020 Infiniti Q50 S Signature Edition ProASSIST, which gives it that slightly sportier look, a subtle black spoiler, LED foglamps, a power sunroof and a few electronic safety aids. What I particularly like about this package is it doesn’t flood you with technology, but rather gives you the basics like blind spot monitoring and emergency braking, while opting out of adaptive cruise control.  Final MSRP for this model is $51,952, or roughly the entry price of a base-model BMW 330i. 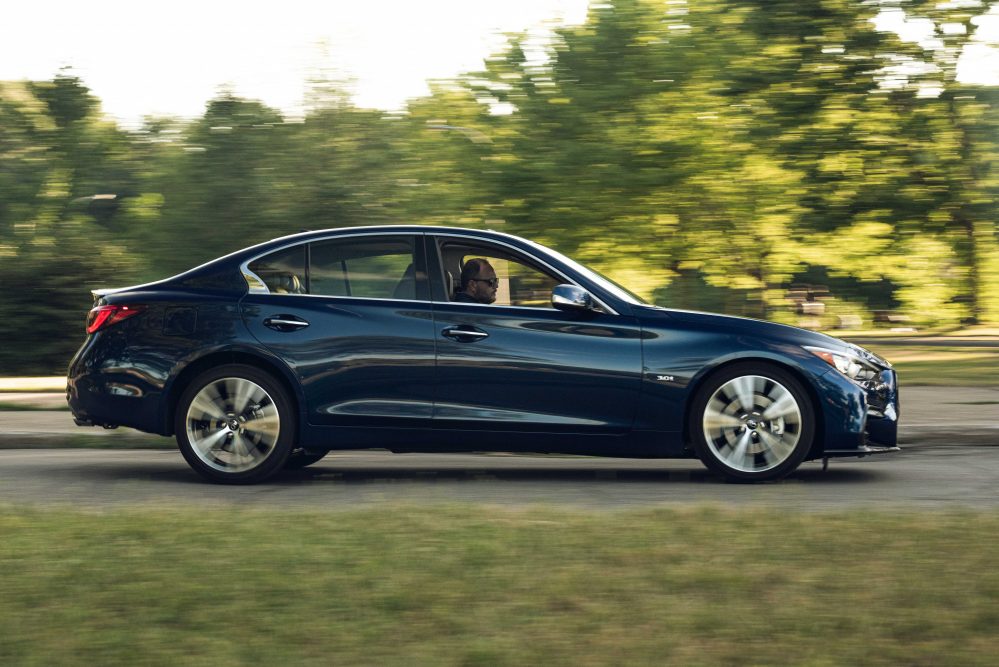 On paper, the 2020 Infiniti Q50 S has everything to dethrone its European competition. The problem is that things kind of start falling apart on the road. For instance, its twin-turbo V6 pulls hard and provides more acceleration than one actually needs in this segment, but the suspension is always too soft and the car quickly defaults to irritating understeer, which is odd considering the rear-biased platform its riding on. 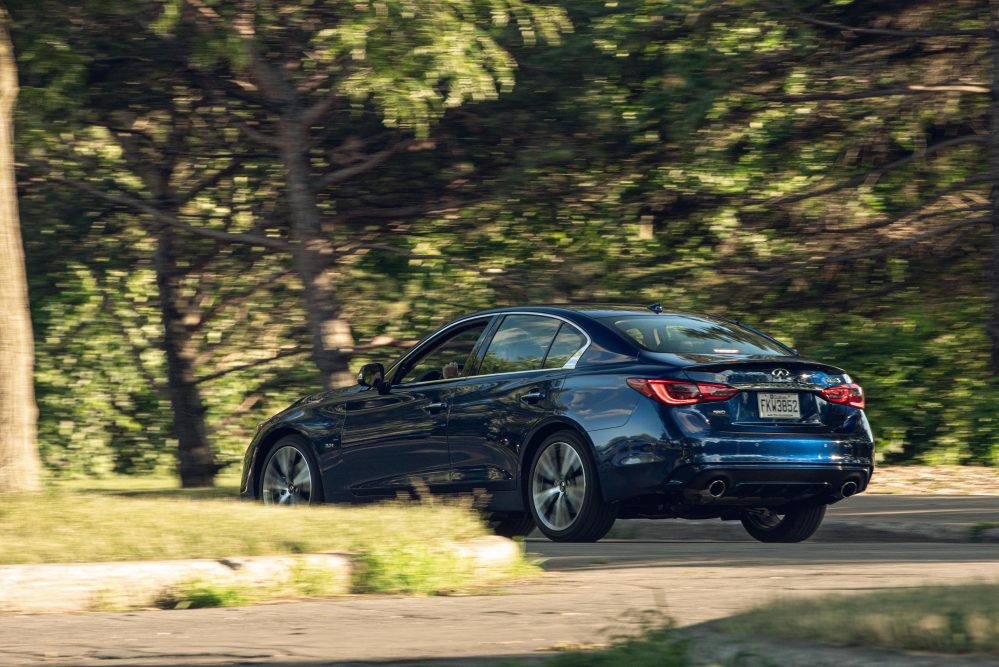 As expected, there’s playfulness in this chassis, and a willingness to let you throw it hard into a corner. From a performance standpoint, the Q50 does deliver, but only to a certain extent, as the car somehow feels easily unsettled, jittery and incomplete. It’s like it never knows what it’s supposed to be. 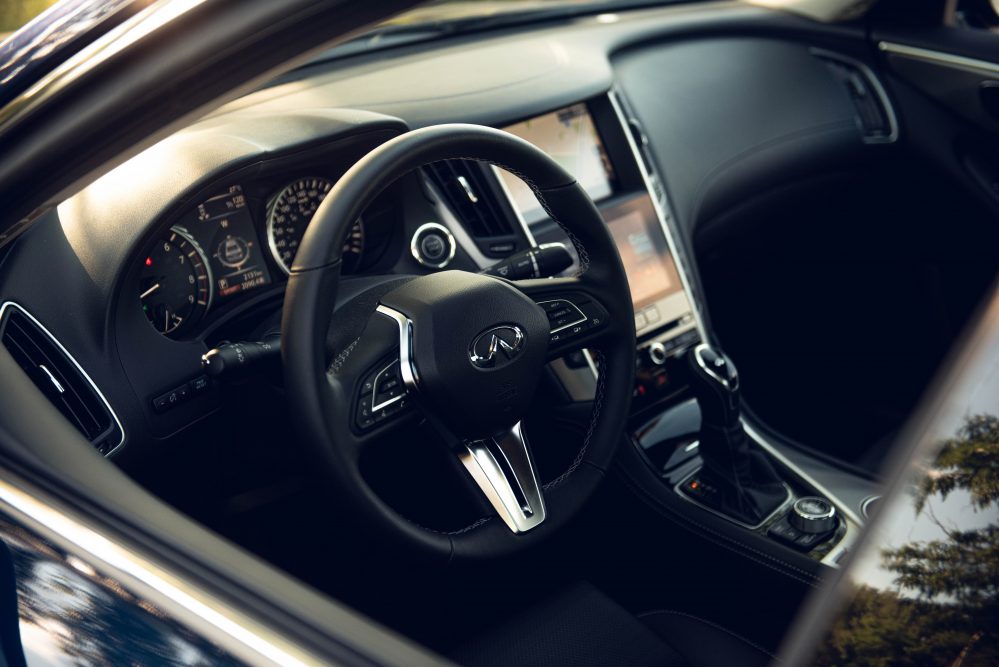 Then there’s that drive-by-wire power steering system Infiniti calls Direct Adaptive Steering. It’s precise alright, but never provides any form of feedback. Furthermore, cycling through the available drive modes does very little at enhancing or even alternating the experience. 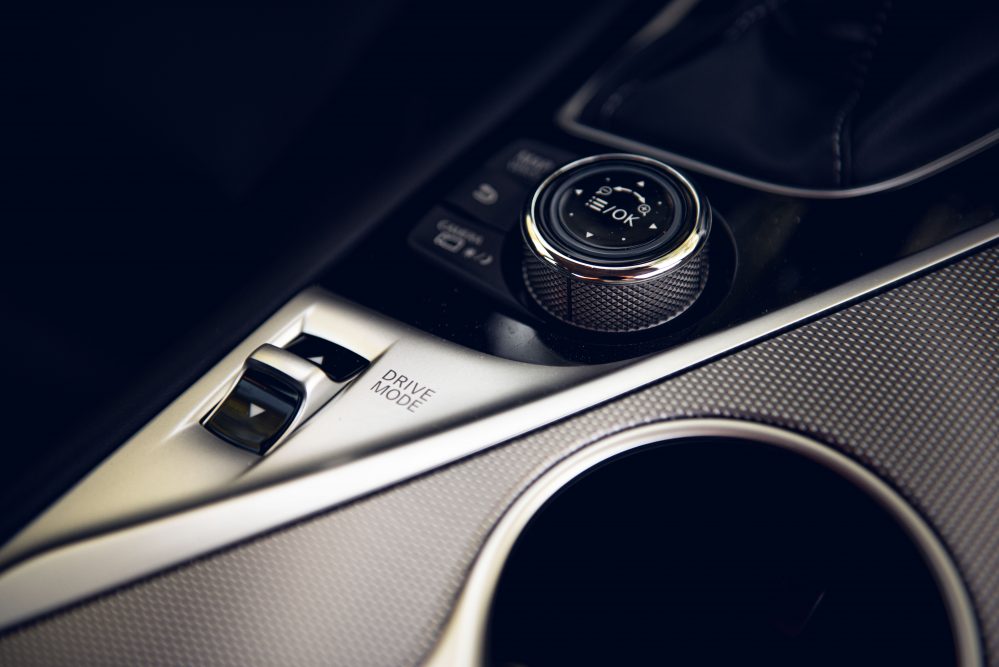 This is an area Genesis and the German brands currently master; the art of giving a car multiple personalities at the press of a button. The Q50 has many modes alright, but they do very little to give the car character, let alone improve fuel economy or performance. 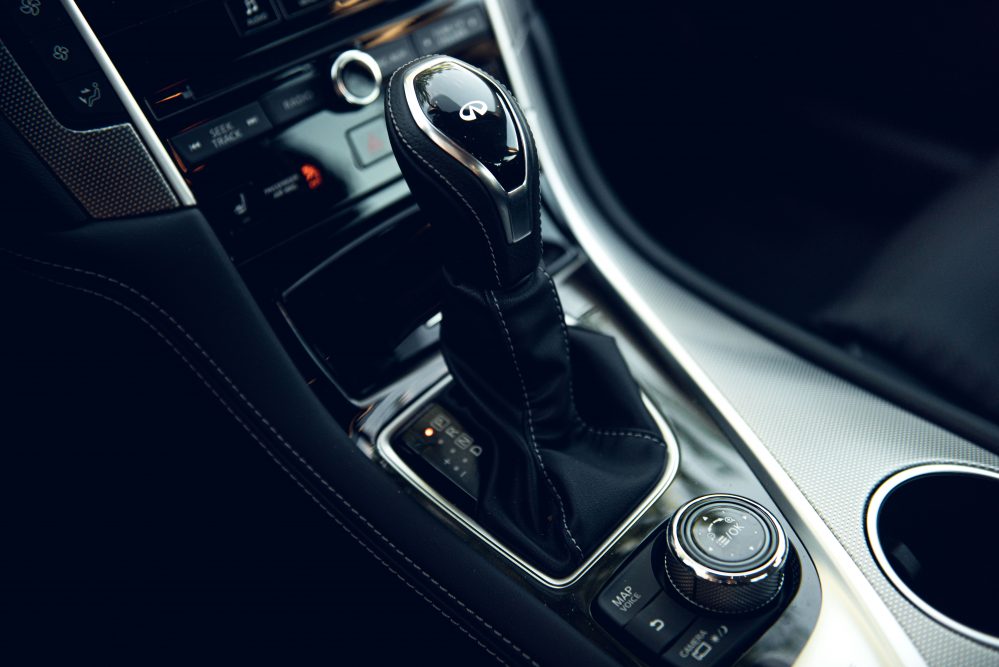 The automatic gearbox works well, though, I’ll give it that, but I would have appreciated a pair of paddle shifters in my test unit, a feature that’s now expected in this class. Shifts are smooth, making you wonder if they even happened at all, and the engine delivers power in an urgent, energetic manner that makes you want to come back for more. 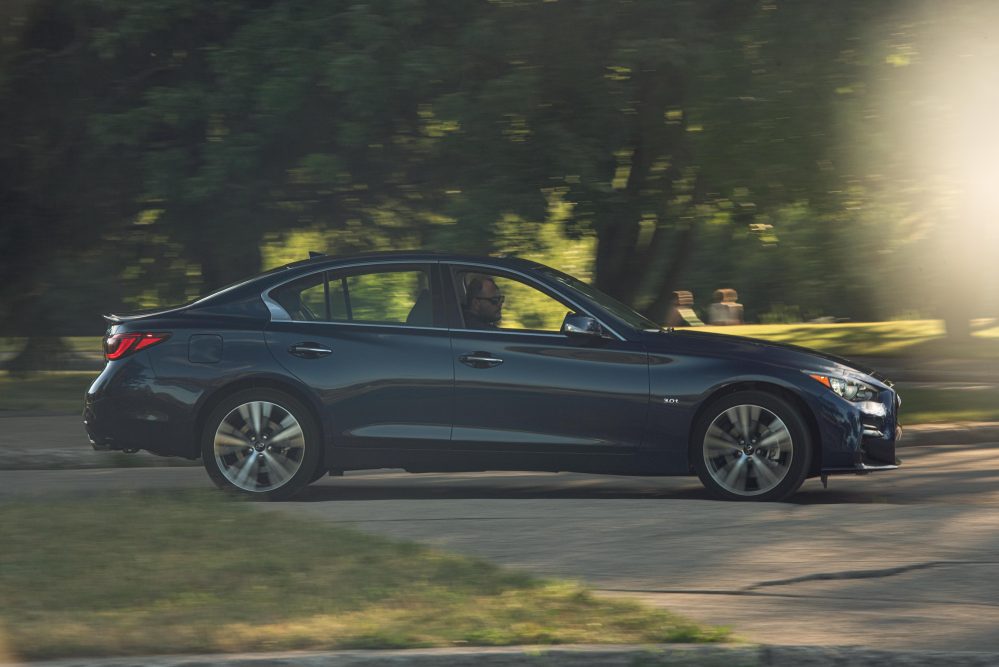 But the cold hard truth is that when you push the 2020 Infiniti Q50 S hard to its limits; to a point where it squeals its tires, plows its nose forward and wobbles about on uneven pavement, you sadly realize that you can get better for similar money. And that’s a problem.

Mixing The Old With The New 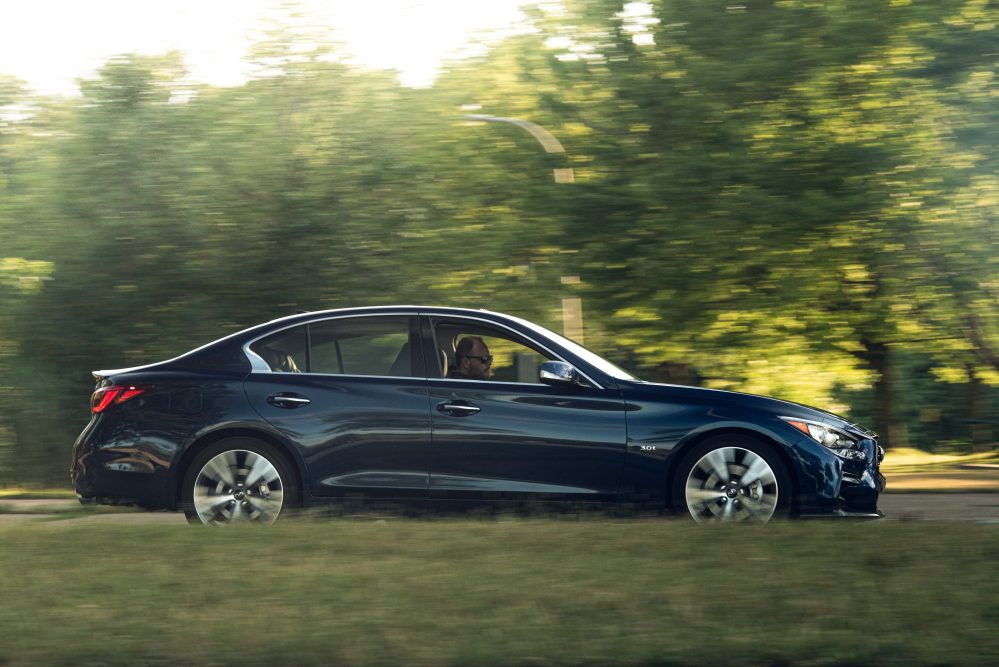 Inside, the Q50’s cabin is an interesting blend of modern technology and old-school Nissan/Infiniti switchgear. The dashboard’s center section has a clean, modern design to it and incorporates the two screen setup better than Acura does. Automotive reviewers like to bash on this system, but I actually don’t find it all that bad. You use the lower screen for everything, and keep the top one for navigation, it’s actually simpler than it looks. 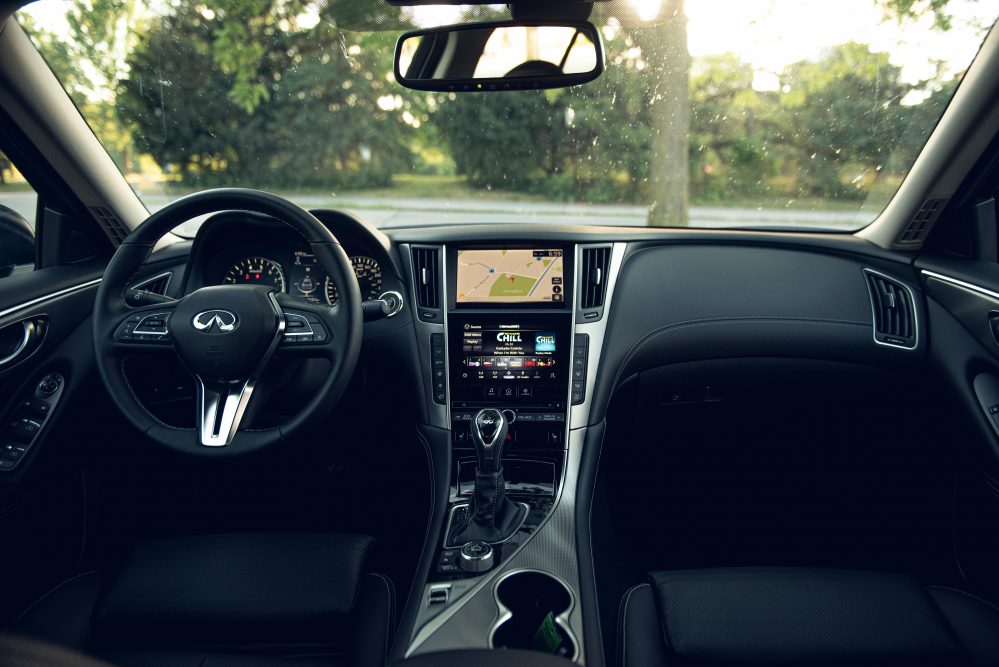 It allows you to cycle through radio stations while still seeing the map. Infiniti incorporates a tiny knob dial on the center console to help you manipulate the system, but there are also redundant physical controls to quickly access menus. That said, the navigation system’s graphics and touch controls feel like they’re from another decade. 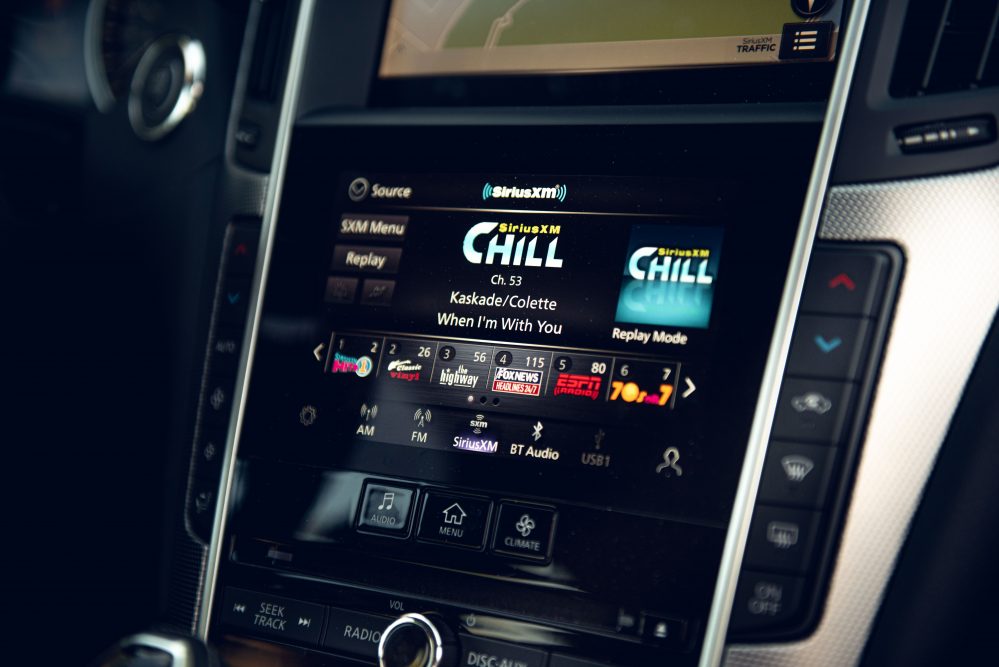 Where the Q50’s cabin really disappoints isn’t how spacious or comfortable it actually is. That, it does rather well in fact. I’d know because I drove from Montreal to Toronto in this car and was quite impressed by the level of comfort and support provided by the front seats. 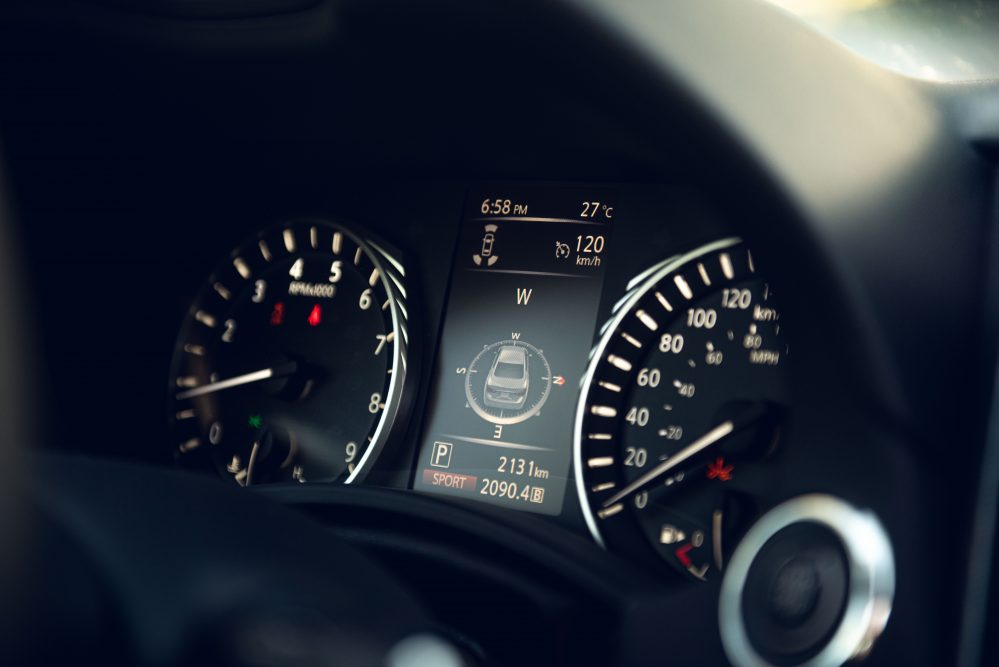 Where the Q50 falls short is in overall ergonomics and storage space. There’s nowhere to drop your smart phone, the center storage compartment is tiny and the cup holders take up all the available space. 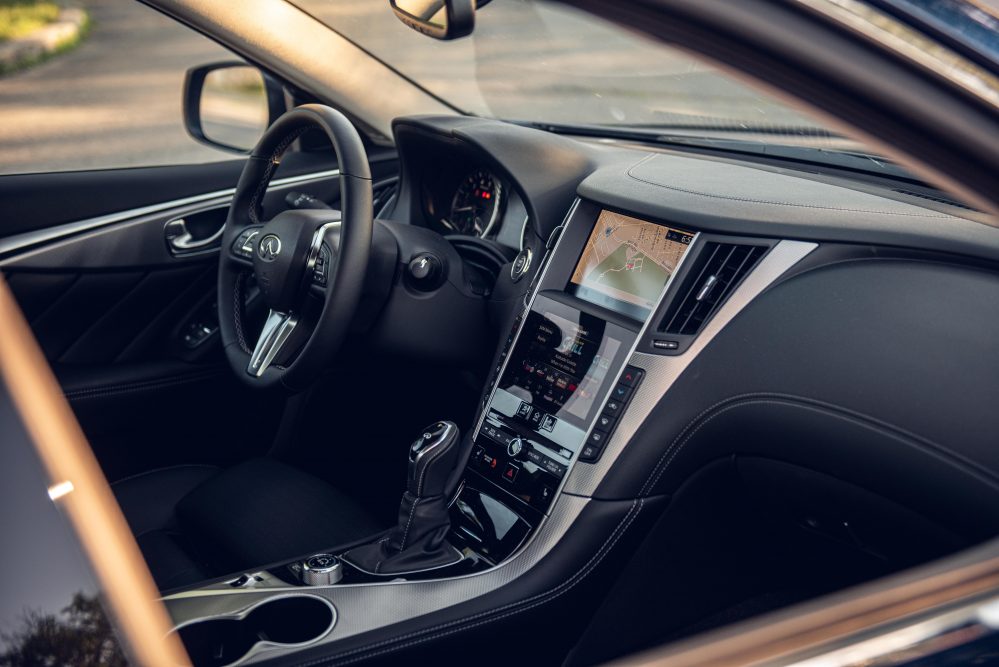 This all brings me back to my first question of why you should get a 2020 Infiniti Q50 S over a comparatively priced BMW or Lexus. Yes, you’ll be getting more performance from the Q50, and honestly, the drive is still good if you keep things dialed down at the first level. The issue at hand here is its competition. The Q50 simply isn’t as well rounded as those cars.

Yet, somehow, it’s still outselling its two main Japanese rivals. Why is that? Because Infiniti is offering solid deals on the Q50 at the moment, which make it hard to ignore. I know two people who recently bought one, and both confessed they signed for a Q50 because of their dealership’s aggressive payment plan and low interest rates. 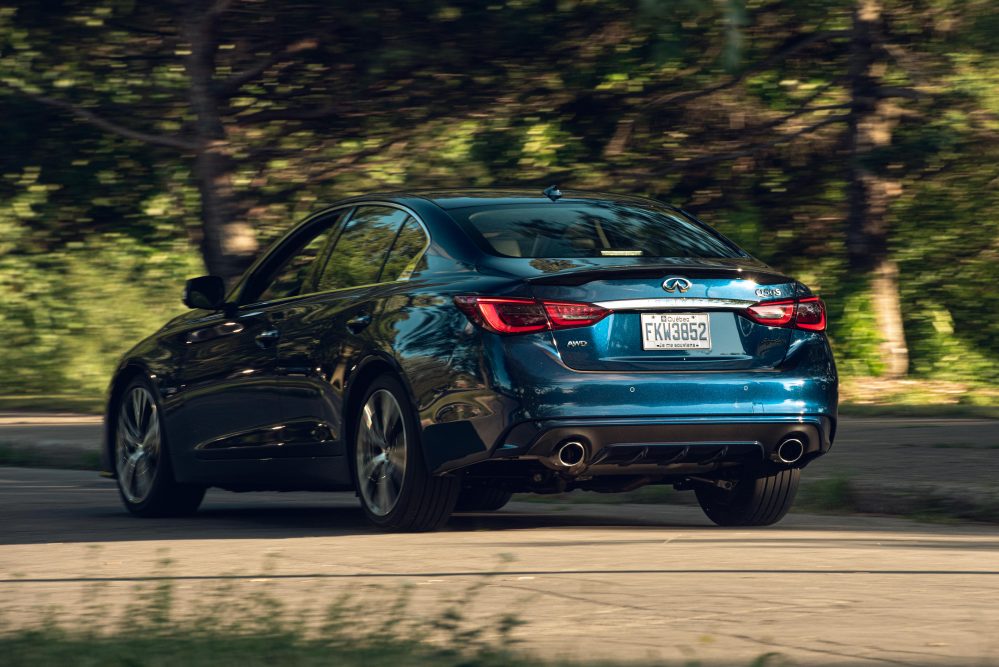 In that respect, it makes total sense to opt for this sedan if you’re making a good deal on one, because you will be getting ample performance, a solid design and above average reliability for your dollar. But seriously though, doesn’t Infiniti’s sport sedan deserve to be more than a cheap monthly payment?