The 2017 Jaguar F-Pace S Is Our Crossover Redemption 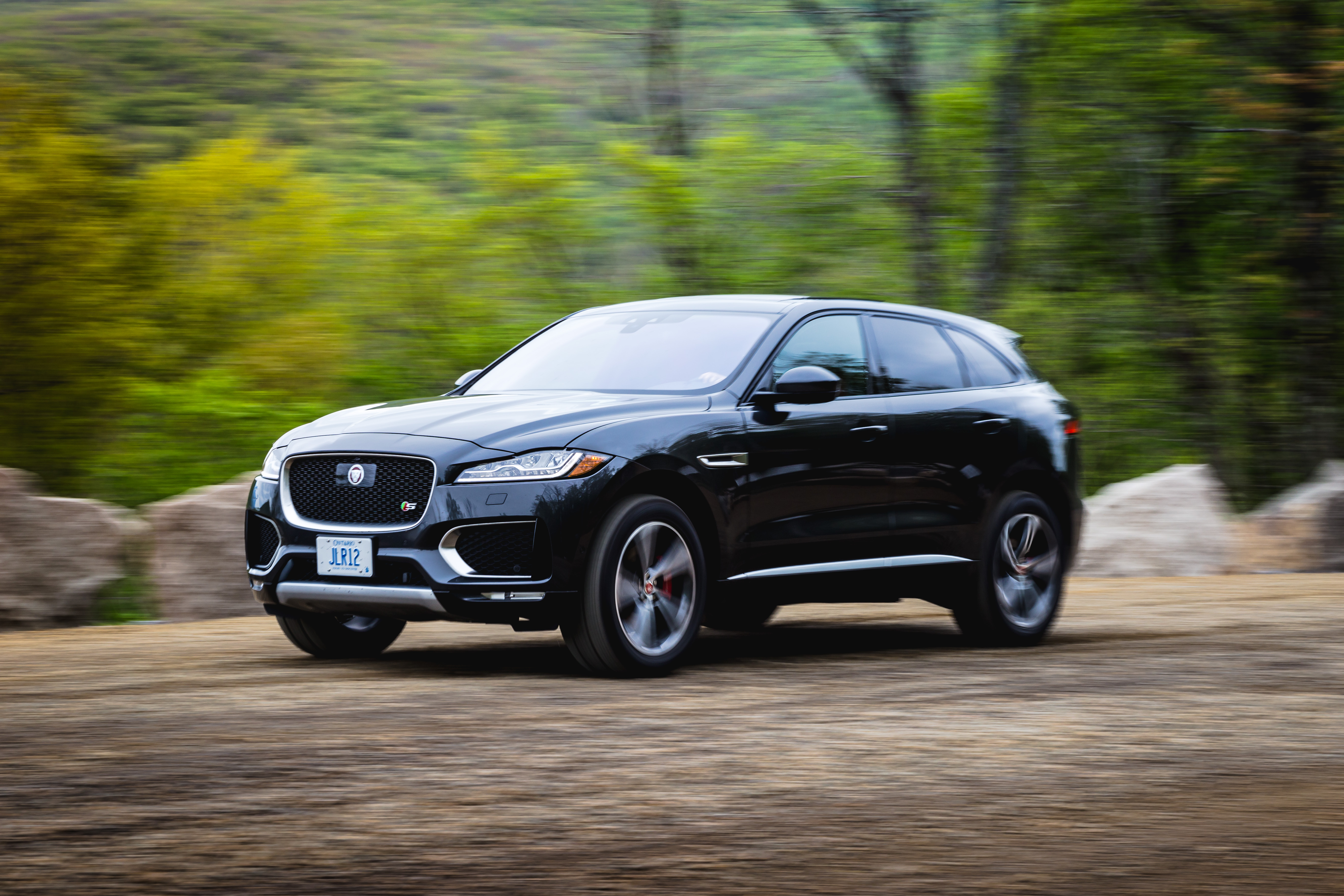 When Jaguar Land Rover arose from the ashes under Tata Motors leadership almost a decade ago, it wasn’t long before we saw the British premium brand get back to its senses with a sumptuously sexy, highly distinguishable, and unquestionably loud sports car: the F-Type. In my book, that thing remains among one of the most beautiful modern automobiles ever built.

But when that same carmaker announced it had plans to develop a compact crossover that would compete against the Porsche Macan, Mercedes-Benz GLC300 and BMW X3, I immediately looked away. As an enthusiast who has always admired the prancing cat for its unmistakable craftsmanship and instantly identifiable character, I, among many, frowned upon the idea of a Jaguar crossover. But since the general public doesn’t share the same disdain for these sorts of vehicles as you and me, and have repeatedly proven that dropping a lofty sum of money on one can very much be a thing, Jaguar’s creation was sort of inevitable.

Thankfully, the F-Pace is very much a Jag.

World Car, And World Car Design Of The Year 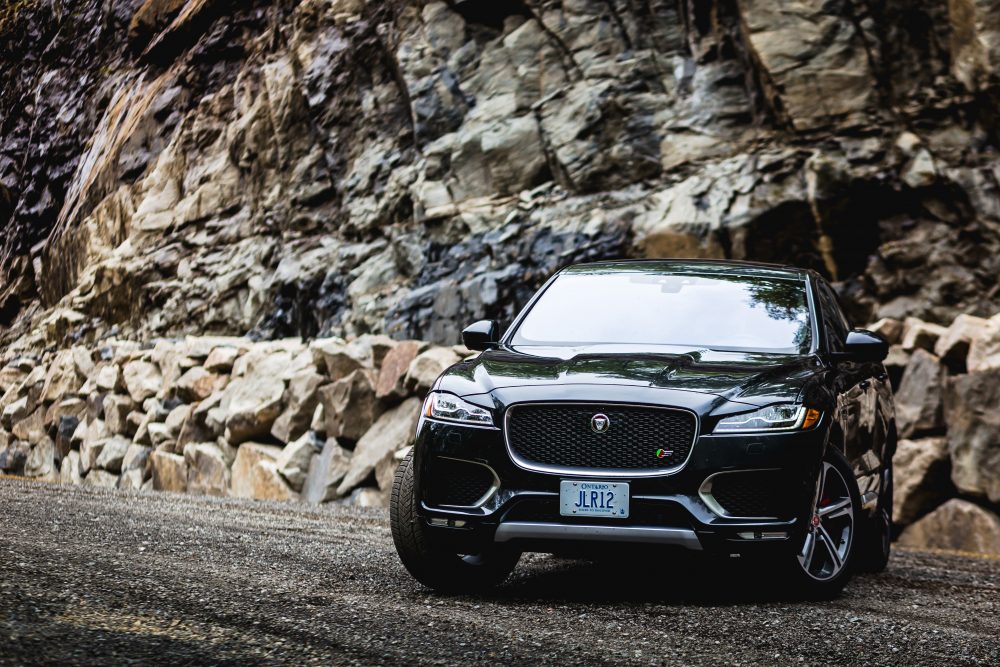 Any carmaker will tell you that winning world car of the year is a huge accomplishment, but when the Jaguar F-Pace was also given the second, World Car Design of the Year award at the 2017 New York Auto Show, even Jaguar Land Rover’s own CEO, Ralf Speth, was somewhat lost for words when taking the prize on stage.

Truth is, the Jaguar F-Pace (such a cool name) is a truly beautiful thing to behold from all angles. From a design standpoint, this is an absolute homerun for Jaguar. 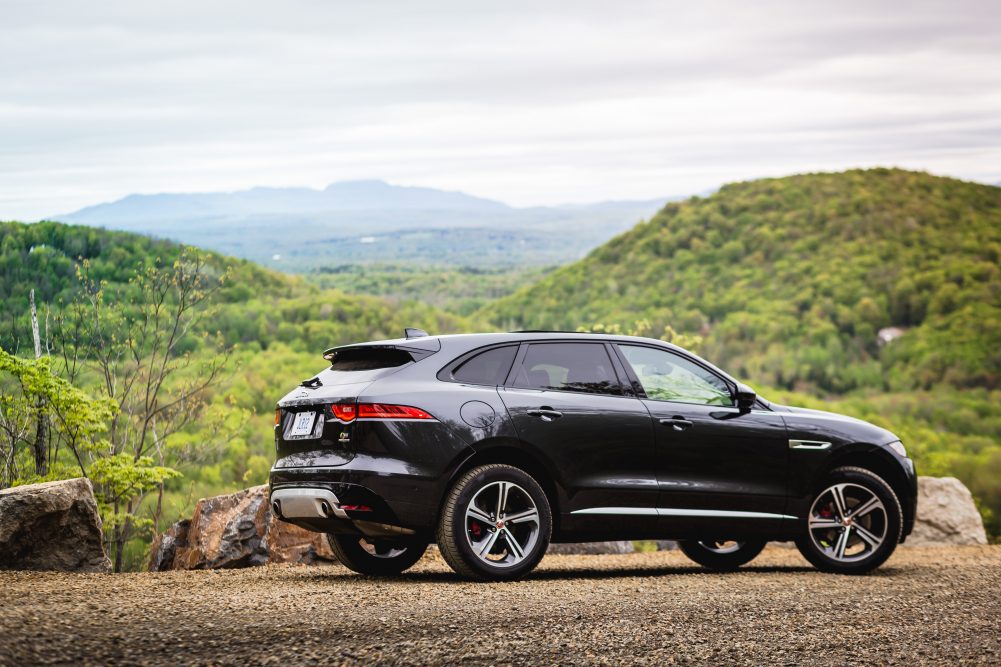 The F-Pace’s design spawned in the creative mind of Ian Callum, who is currently the director of design for Jaguar cars, and has worked on past Ford, Aston Martin and TVR vehicles. For the F-Pace, Callum wanted its appearance to evoke movement, very much like the athletic prancing cat that the entire brand is inspired from. The F-Pace also needed to distinguish itself from the other British SUV’s the same company is selling under the Land Rover nameplate. To achieve this look, the F-Pace’s front fascia is adorned with squinting headlights and a long, sweeping hood that flows gracefully into an aggressively raked, coupe-like cabin. The entire package ends its journey in a tightly nipped tail silhouette, and taillights that mimic those found on the F-Type. The end result, thanks to the addition of a low cowl and bulging haunches, is a sport utility vehicle that truly resembles a sports car.

Taking On The Best 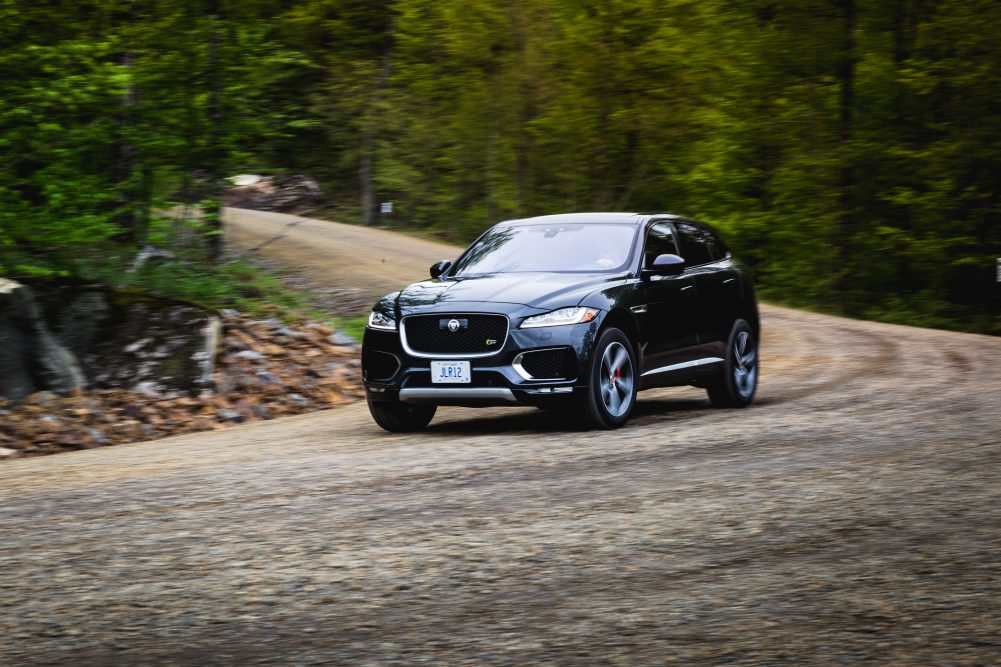 Mind you, this isn’t the first time a lifted five-seater with all-wheel-drive and ample cargo space impresses me. The Porsche Macan, the F-Pace’s most direct competitor, had every bit the driving characteristics of a giant hot hatchback. But this F-Pace is relatively late to the party. And most luxury carmakers, Porsche, BMW, Mercedes-Benz, and even Audi, have long since established their sport utility know-how over several generations. Does the F-Pace have the chops to take them on? 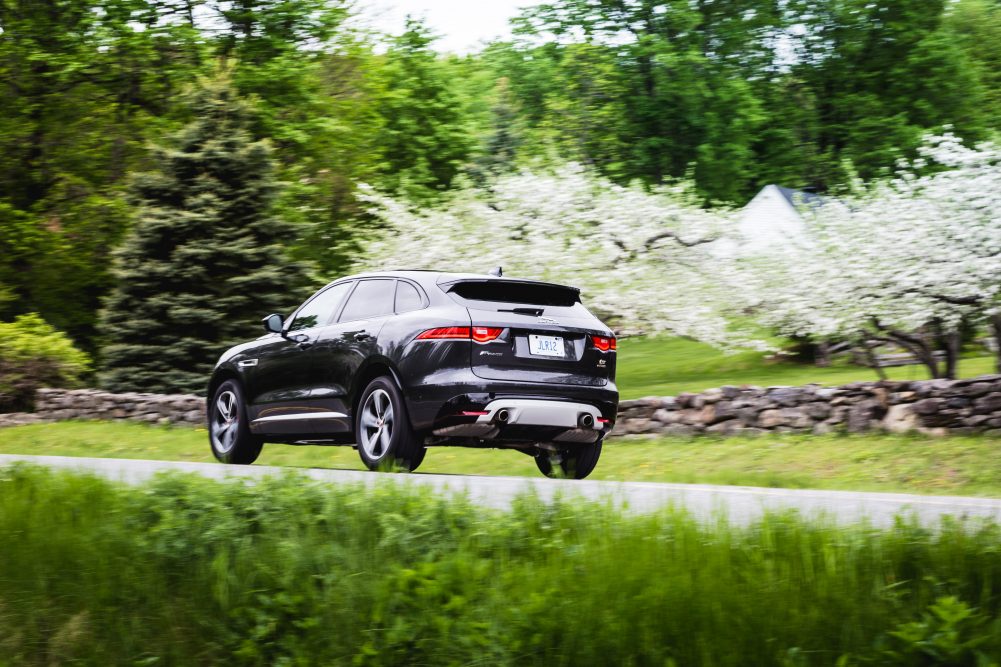 Well it’s definitely off to a good start. At least, performance-wise it is. Under its hood lies the Jaguar Land Rover corporate 3.0-liter, supercharged V6. The F-Pace 35T, the entry level V6-powered model makes do with 340 horsepower. The S, on the other hand stands at 380. Torque remains the same at 332 lb-ft. 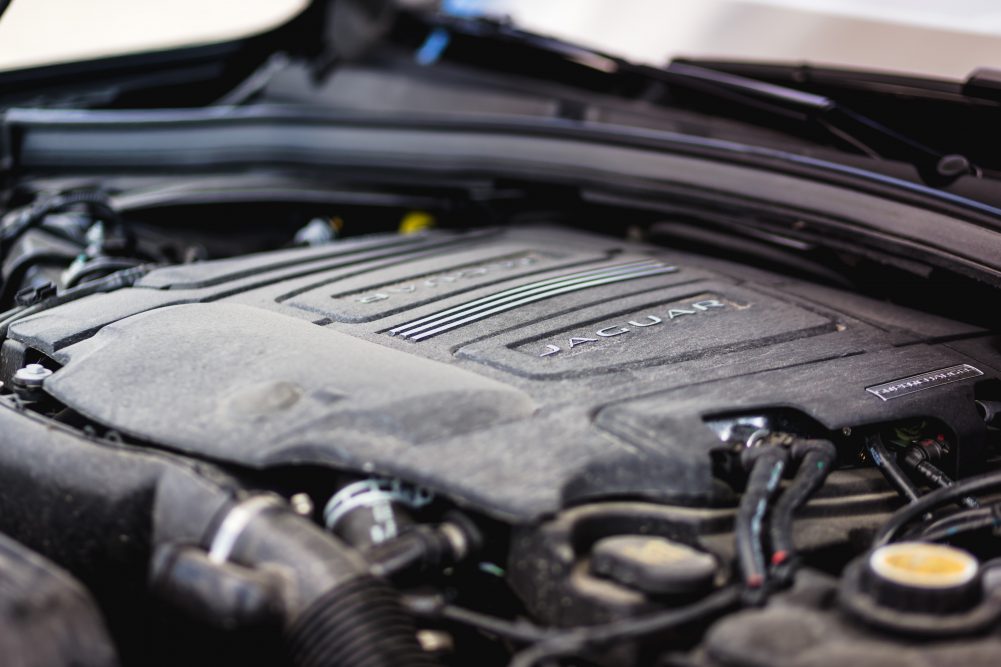 Acceleration from 0 to 100 km/h is sports car appropriate, and estimated at around 5.2 seconds. The only available transmission is a ZF-sourced, eight-speed automatic with steering-mounted paddle shifters. A 2.0-liter, four-cylinder diesel or petrol four cylinder sits in the entry-level models.

The real beauty with the F-Pace, and what truly distinguishes it from a Land Rover, is that all of its power is instantly sent to the rear wheels. Front wheel assistance is only engaged when wheel slip is detected, similar to what you get in a high-performance sport car like a Nissan GT-R. This means that the F-Pace, albeit being somewhat top-heavy, handles very much like the true front-engine, rear-wheel-drive machines that constitute Jaguar’s heritage. 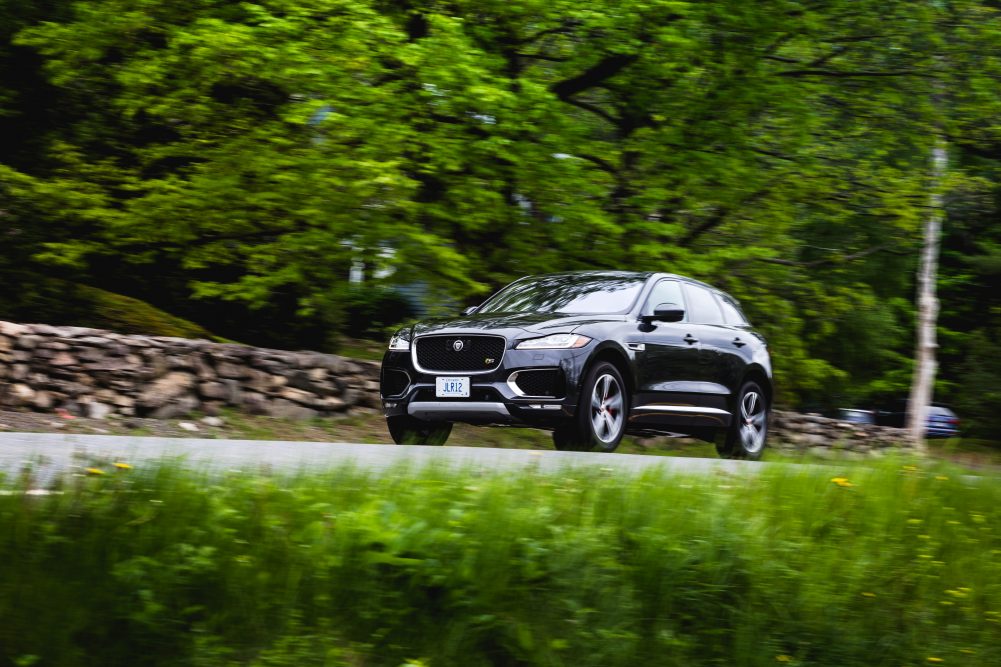 Yes, this remains a crossover, but there’s a sense of agility in the way the F-Pace handles that can’t be denied. It offers tons of grip, the steering response, although light, is sharp with precise on-center feel, and the impeccable poise of the F-Pace rewards aggressive driving. But body roll remains an issue, which isn’t a surprise considering its high ride height, and the brake pedal is squishy and unsettling, interrupting the otherwise confidence-inspiring driving experience. The Porsche Macan definitely feels more focused than this. 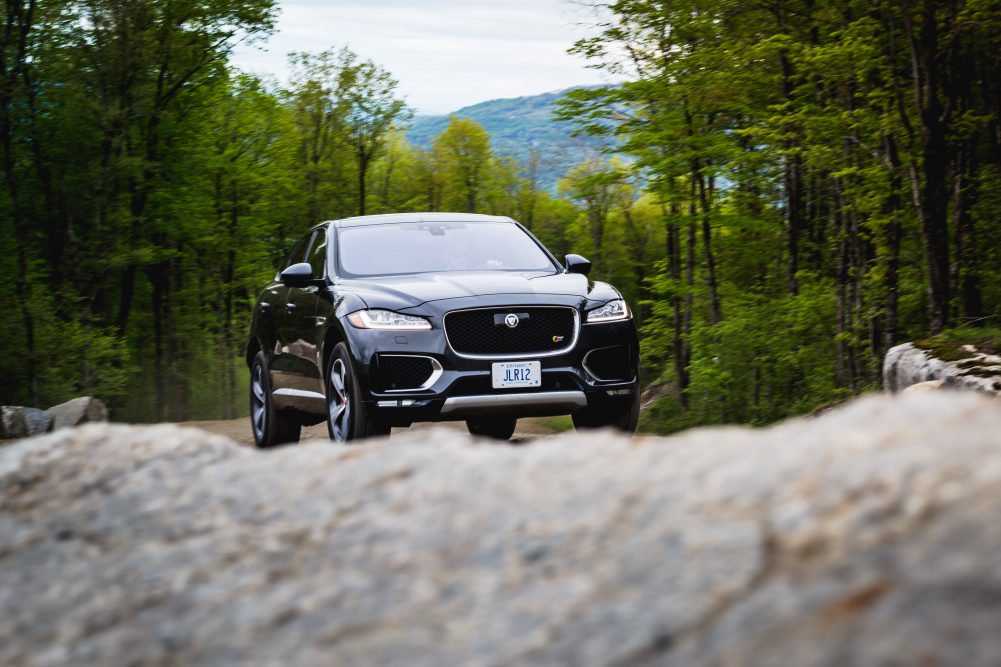 But where this Jag shows its true competence, is in the way it delivers power. That V6 emits an ever-so-lovely snarl, especially in Dynamic mode. The pleasant intake rasp, married to addictive crackle and pop exhaust farts, encourages heavy foot driving. Or tunnel hooning. Stomp the accelerator pedal at any speed, and once that supercharger spools up, this stylish, aluminum-bodied luxury trucklet pulls hard and smooth all the way to redline. 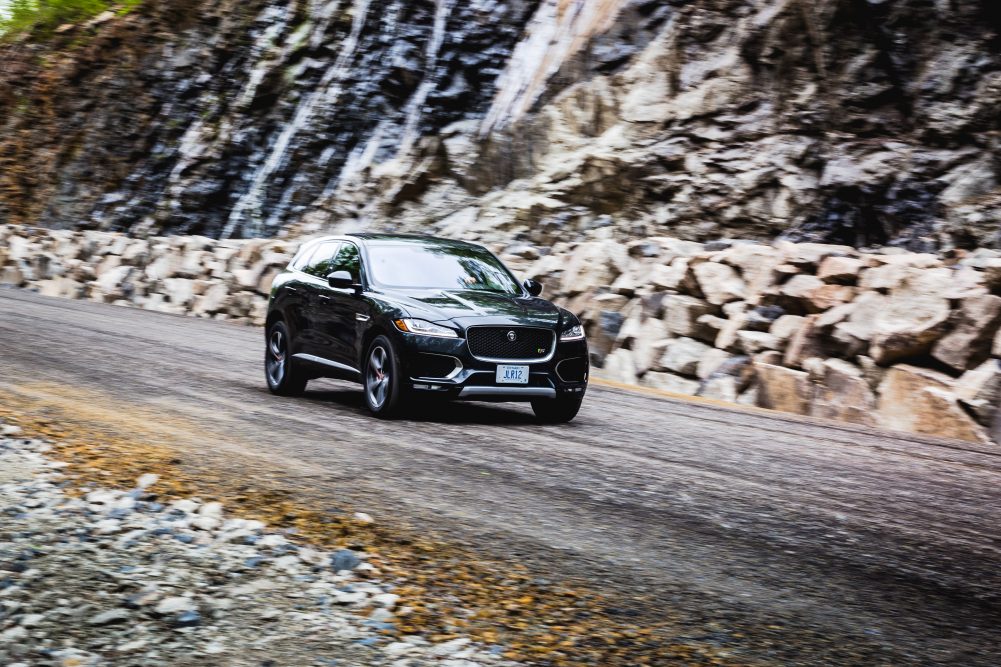 Unfortunately, like in the Land Rover Discovery Sport I drove this winter, the F-Pace inherits an awkward delay in throttle response. Part of this has to do with the ubiquitous and controversial ZF gearbox. Jaguar’s throttle-by-wire system also needs a bit more work. It’s twitchy, causing unpleasant, and sometimes, unexpected surges of acceleration, leading to an unwillingness to be driven casually. I get that the F-Pace is a performance SUV and all, but for a vehicle whose main duties will be to carry families and grocery bags, there’s definitely room for improvement here.

Let’s just say this kitten prefers being grabbed by the scruff of the neck, rather than being tickled. 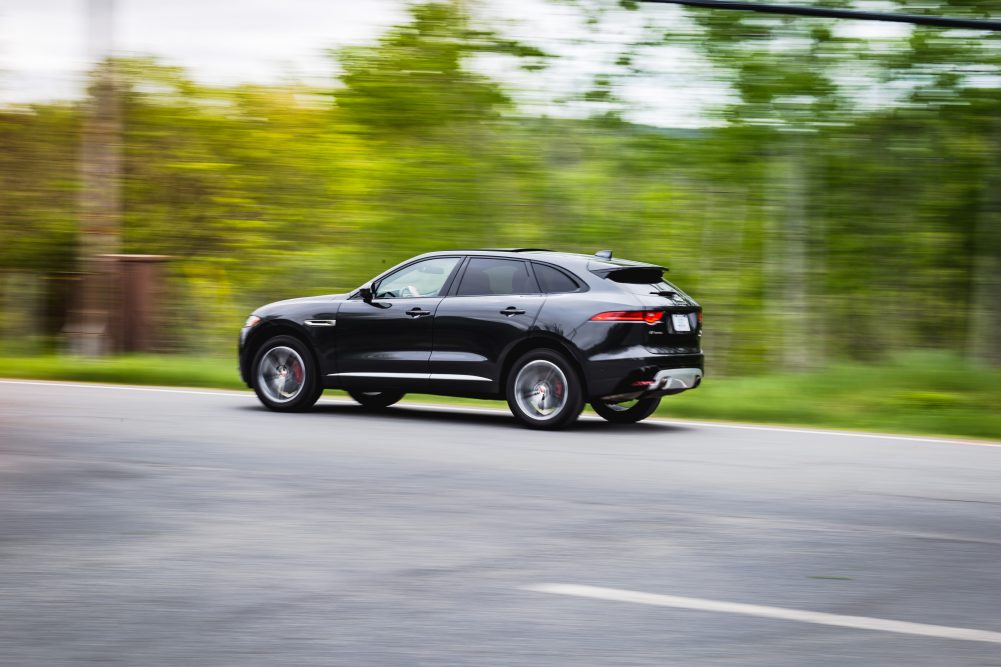 Jaguar markets the F-Pace as a compact crossover, but its overall dimensions slot more between a Porsche Macan and a Cayenne. That has to do with the rear-wheel-drive platform it’s derived from, which also underpins the XE and XF sedans.

This increased length gives this SUV a significant advantage in cabin room and cargo space versus the others in the segment. Rear seat room in the F-Pace is immensely comfortable and conveniently spacious. When all seats are folded flat, this Jag gives way to 63.5 cu-ft of total cargo space, almost double what you get in a Macan. 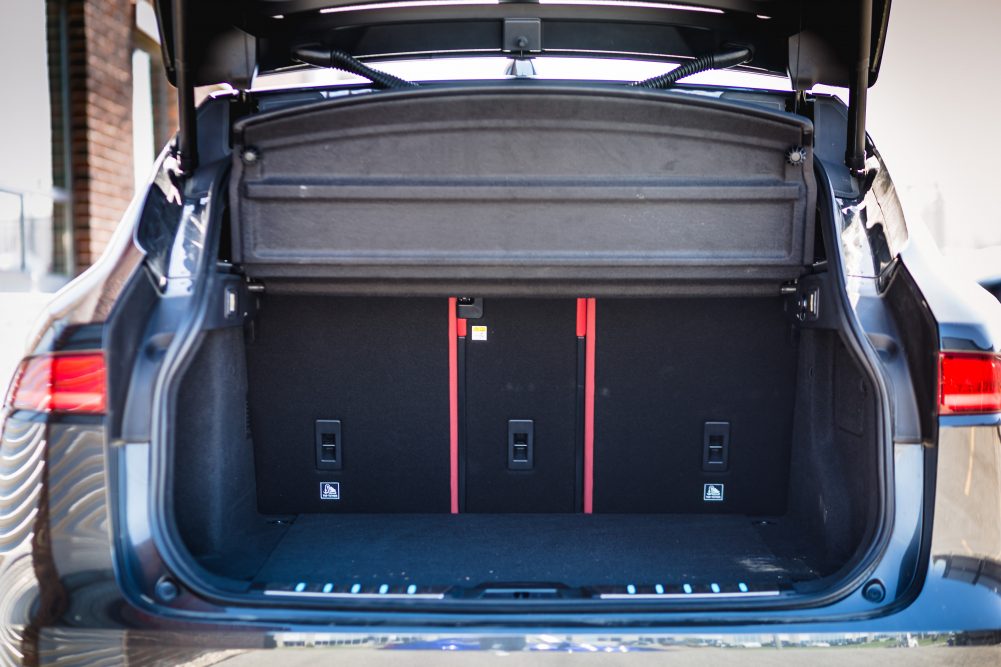 The F-Pace’s overall interior is as elegantly crafted as its exterior. Neat design touches such as the “chicane line” in the doors adds detail to an already elegant cabin, which takes hint of what you’ll find in some Land Rover products. Material quality is excellent, as expected, with soft touch, leather-like materials spanning the dashboard, and an overall functional and sports car-inspired layout. 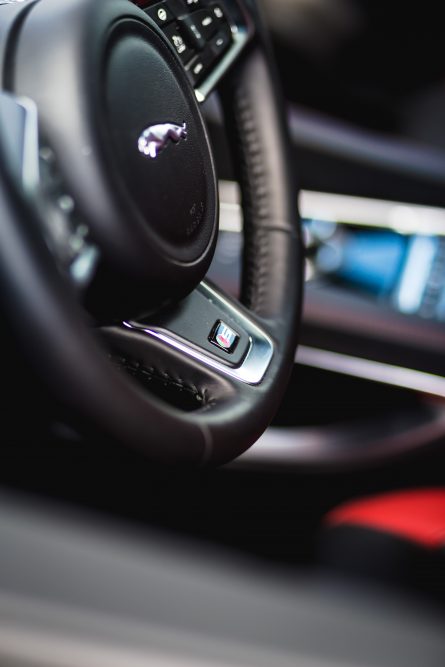 My tester was decorated in red on black, two-tone seats and door inserts. It definitely gave it an edgy look, but as far as luxurious cabins go, I’ve been more impressed behind the wheel of a Volvo. That being said, there’s no denying the F-Pace’s interior is a modern cockpit of clean and stylish design. The fully LCD interface that spans the area behind the steering wheel where a conventional gauge cluster would be, is an neat trick and a functional feature, where the entire screen can transform into a GPS, or your own set of customizable digital gauges. 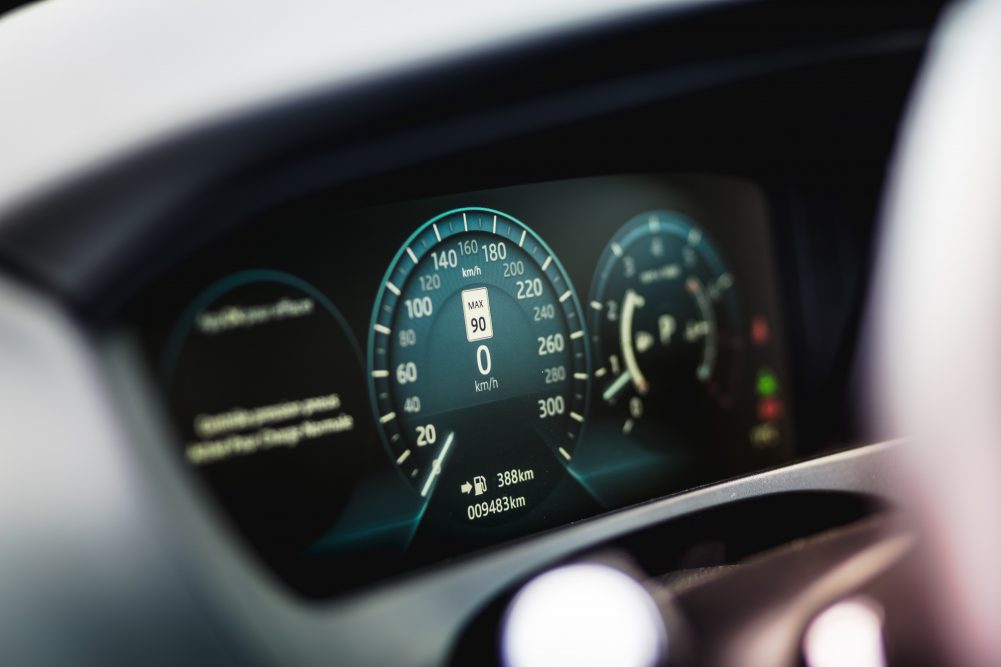 Jaguar’s infamous InControl Touch Pro infotainment system, available in the Technology Package, is an impressive interface, one which Jaguar has pumped a tremendous amount of time and money in, taking four years to develop and working hand-in-hand with Intel to provide quick response and a fluid user experience. 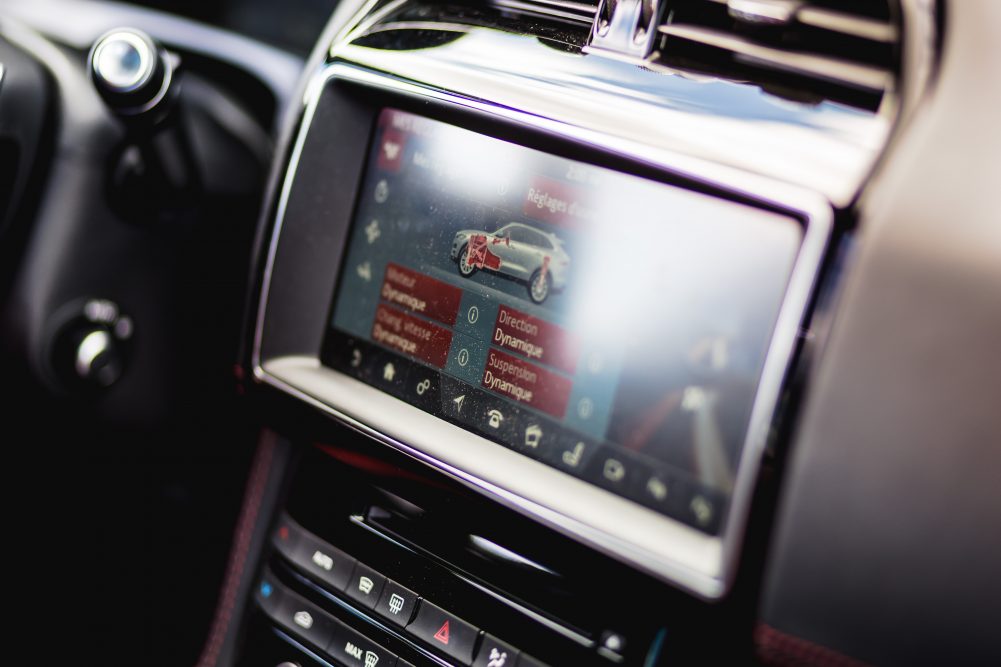 Sadly for Jaguar, I’ve sampled better systems from Hyundai and even GM. And Volvo’s touch-based user experience walks all over this one. The problem with Jaguar’s infotainment system isn’t its inability to react quickly and look absolutely gorgeous while doing so. It does all that supremely well. It’s just not intuitive enough. It’s complicated, the learning curve is steep. There’s a limit to the amount of menus and layers you can put in such systems before they become distracting. And this F-Pace has too many. 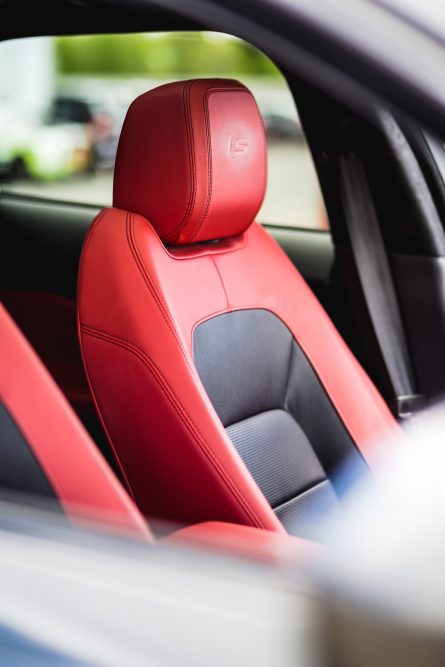 Pricing for a 2017 Jaguar F-Pace starts at $50,250 for the entry-level 25t model, which comes standard with the 247-horsepower 2.0-liter turbo. The turbo diesel sells for just a grand more.

There’s a total of four different trim levels to choose from in the F-Pace lineup. The S AWD, like the one you see here, kicks off at $68,500. When fitted with all available Technology, Driver Assistance, and Luxury packages like my tester, you’re in for $82,400. By comparison, the Porsche Macan 2.0-liter turbo I drove last Fall, which still didn’t have a sunroof, sells for $57,270. Top flight models knock at the door of 100k. 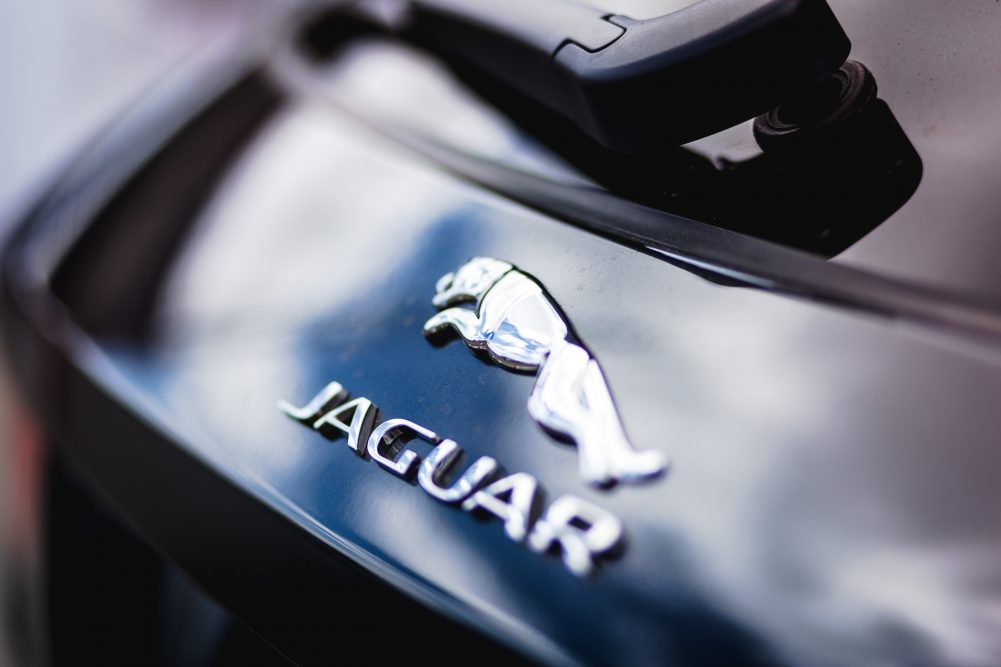 So, has the Jaguar F-Pace changed my perception of the sport utility vehicle? Not really. But it sure is an impressive and elegant machine and in this case, even if the product was designed to ensure reliable profits, it doesn’t feel like it. The F-Pace breathes passion. It’s a fresh offering in an over-competitive segment. It throws its own punches thanks to intelligent packaging, compelling driving dynamics, distinguishable styling and competitive pricing. It deserves its spot against the best luxury sport utility vehicles out there and will undoubtedly sell well. As for me, if the profits generated by this mall finder ensure the survival of the Jaguar brand for the years to come, all while leading to the development of more exciting and compelling sports cars in the spirit of the F-Type, then the existence of the F-Pace is totally justifiable.