The 2019 Jaguar I-PACE Is Now My Favorite Electric Car 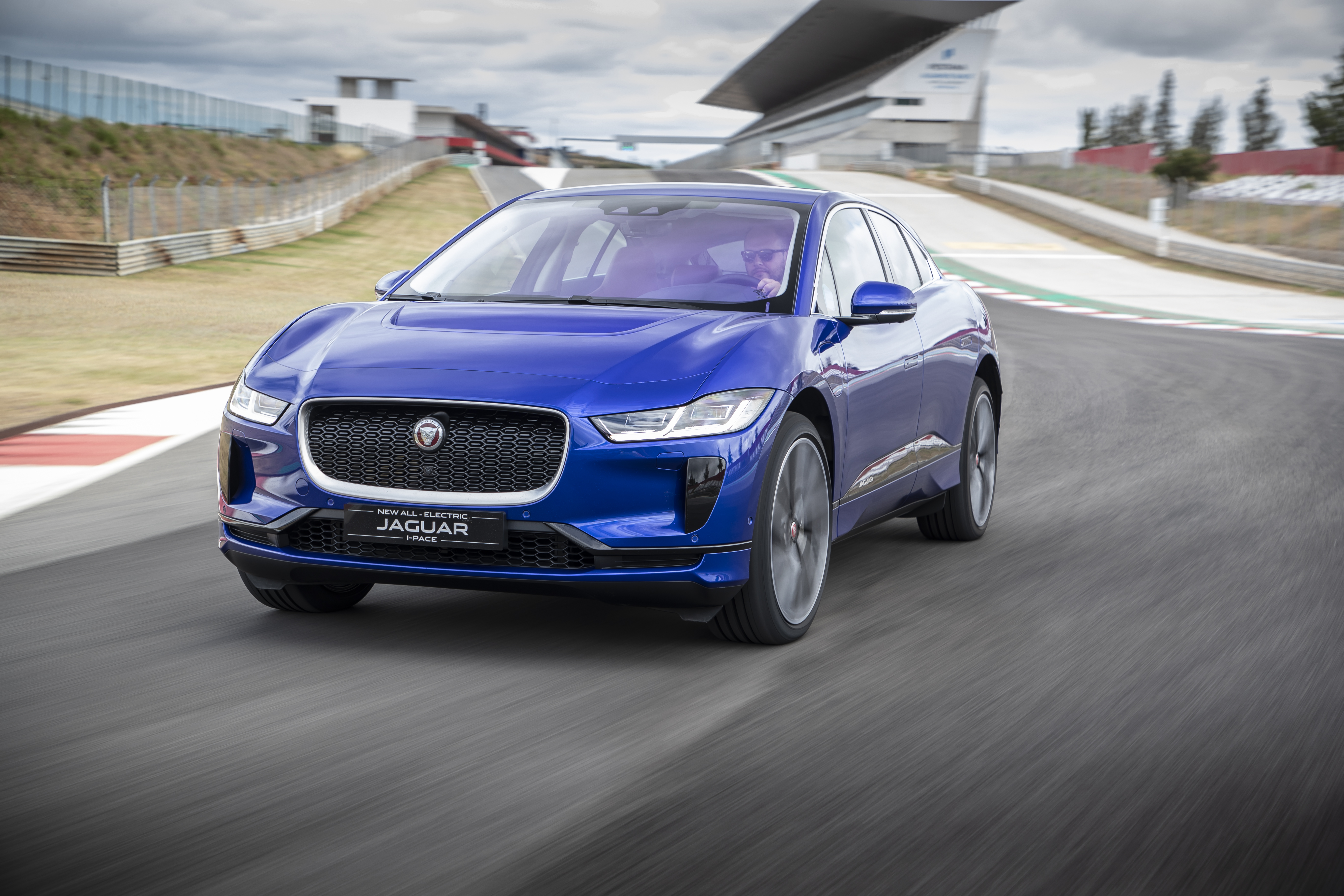 Yes, I know, on these very pages I once wrote that the Volkswagen e-Golf is best electric car you can buy. For the record, I still love that thing a lot and continue recommending you get one. But the world has changed quite a bit since I wrote that piece. Electric cars are becoming more and more of a thing now, and some carmakers have been releasing some frankly cool shit lately.

Sure, the Tesla Model 3 is impressive. Fast. Cool. Technologically advanced. But there’s a new electrified Jag roaming the streets. It’s called the 2019 Jaguar I-PACE, and trust me when I say this, if you’re going to spend 100 grand on a battery powered machine, you’d better opt for this one.

All the Good Things 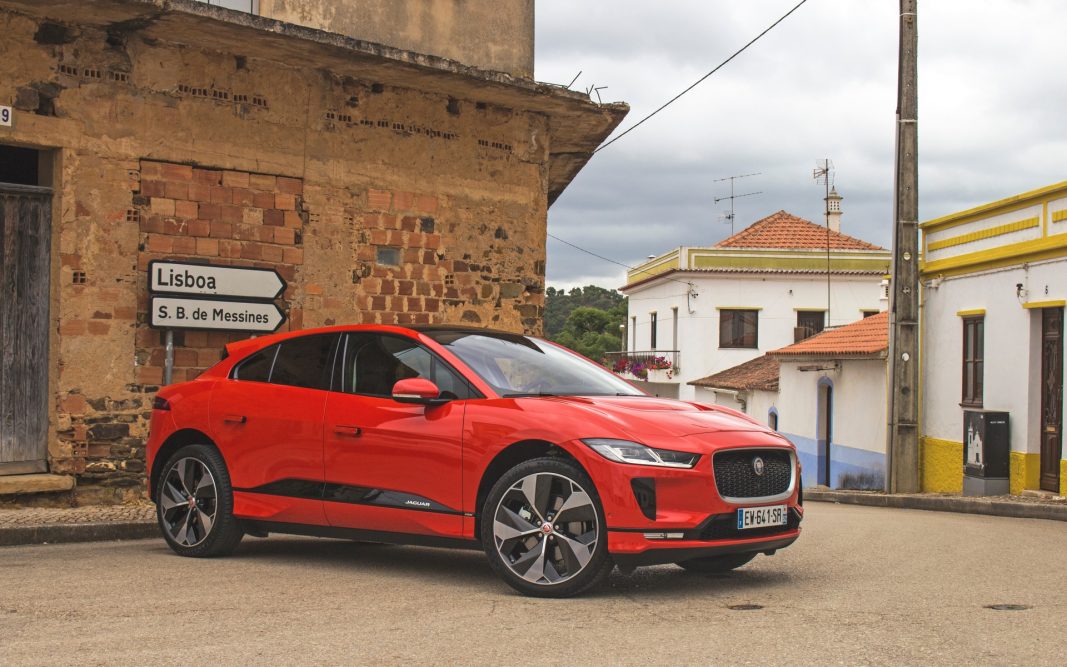 For the record, I drove the I-PACE in Portugal just under a year ago for my day job, but since it’s now officially here and sold at your local Jaguar dealer, I figured it was fitting to come back to it. Because it kicks ass.

First off, I don’t know about you, but I personally love the way the I-PACE looks. That’s not surprising, because it comes from the mind of Ian Callum, arguably one of the best automotive designers in the world, and responsible for some of the sexiest Jags we’ve lately been exposed to. What really makes the I-PACE appear so special is the fact that it has that concept car for the road look, a very futuristic, modern, yet functional design. 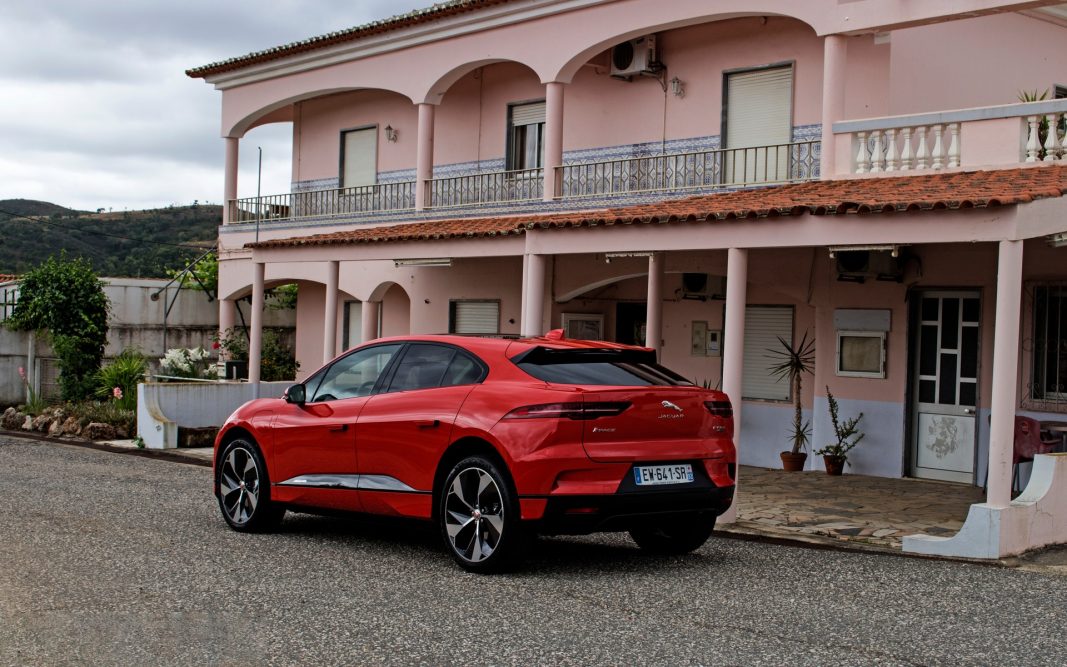 Another very clever aesthetic quality about the I-PACE is how organic it looks. Since electric cars need maximum aerodynamics for improved efficiency, they typically resemble awkward spacecrafts. Their wheels are often odd-looking in order to properly slice through the air and often, these cars have no face at all. Yes, the I-PACE also needs all of that to properly operate yet, it blends it all into a formidably well-executed design. 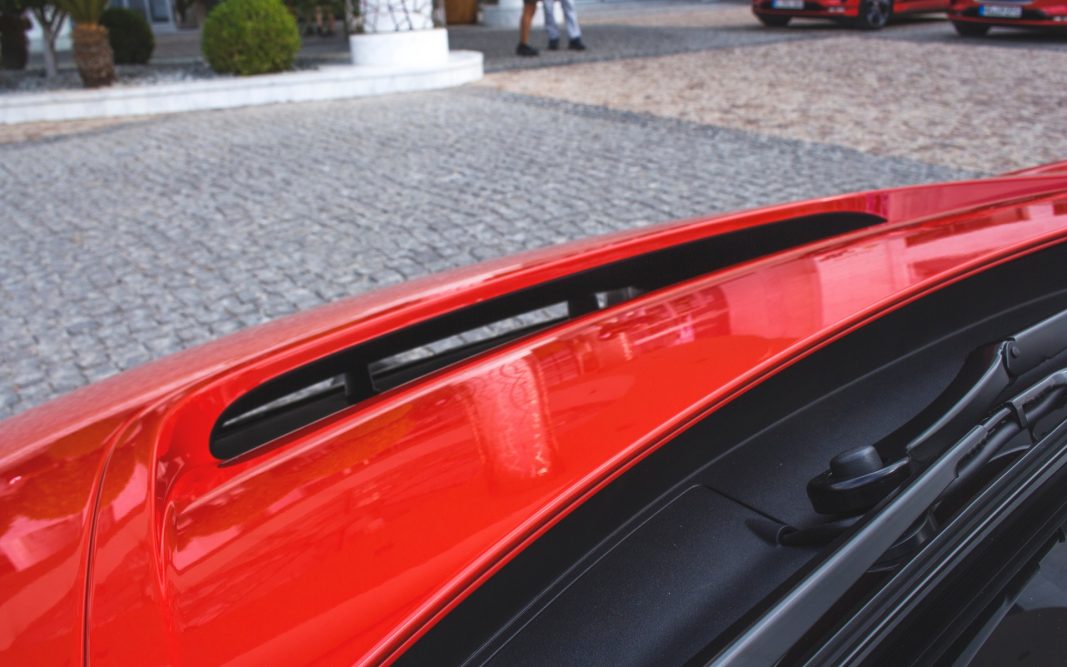 Then, there are the functional bits, such as that enormous air intake on the hood. You might think an electric car doesn’t need it, which is why the Tesla Model 3 has a closed front end. But Jaguar engineered an innovative thermal management system inspired from its experience in formula E. And since that system needs a radiator to flow air through the car, Jaguar engineers made sure to make it visible. Because why not? – Says Jaguar. 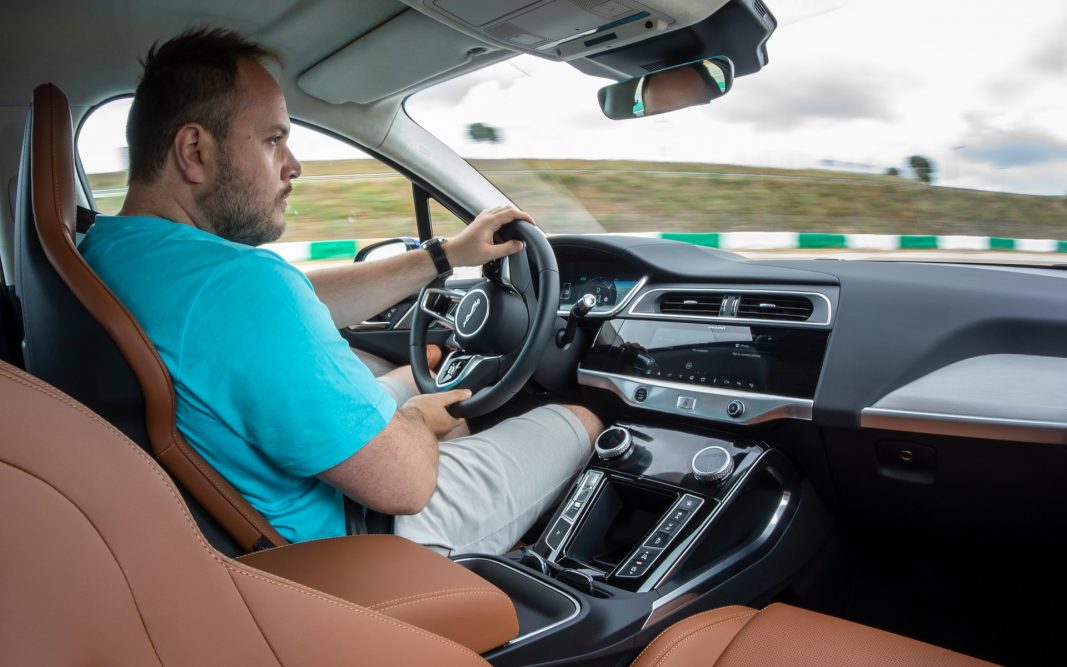 Now, on paper, the I-PACE is outrunned by the Tesla Model 3 Performance. And unlike its direct competitor, the Jag only comes with one battery and one pair of motors across the model range. 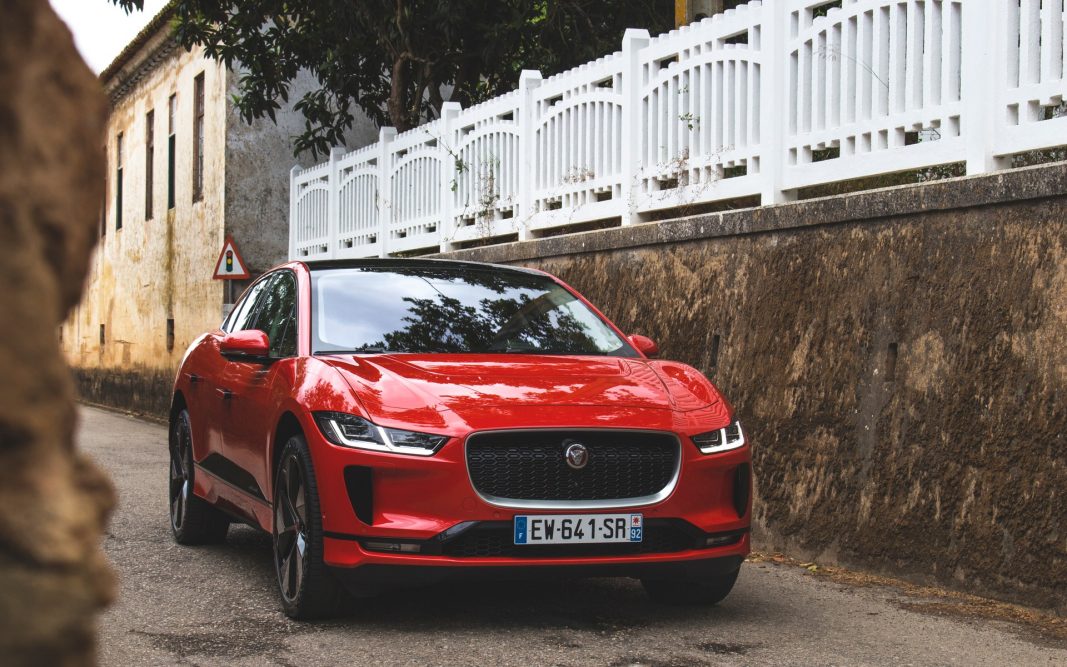 I think it’s fair to say that the I-PACE is the first official Tesla rival. Granted, we’ll be getting a new crop of European EV’s next year, such as the Polestar 2, the Audi e-tron quattro and the Mercedes-Benz EQC. But out of all the car brands, who would have thought Jaguar would be the first one to fight back to the Musk machine? 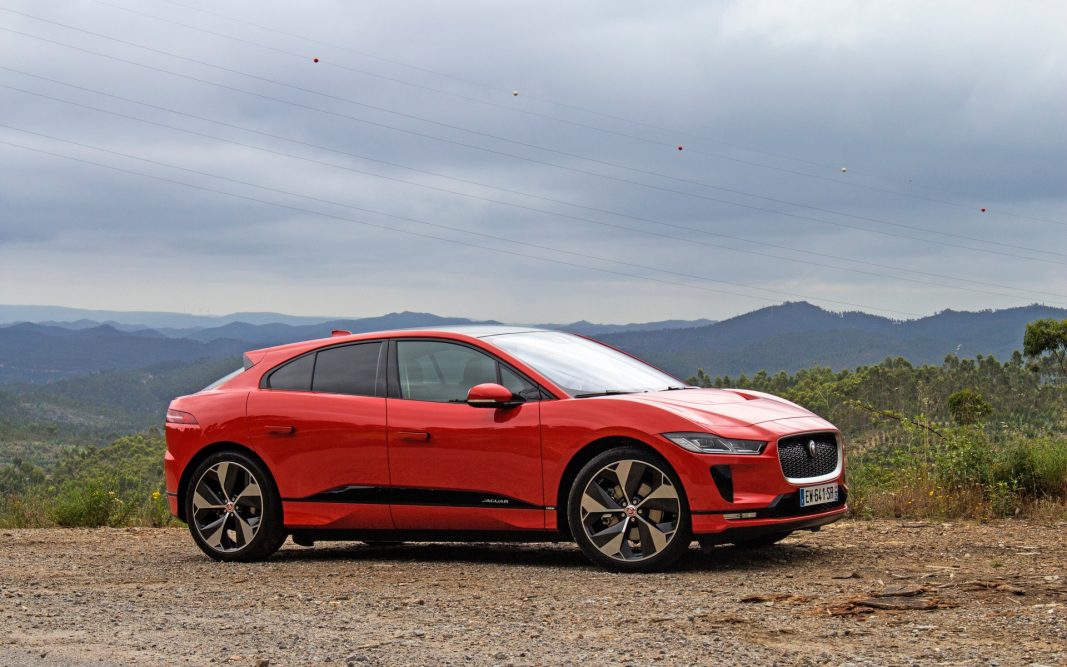 What the I-PACE lacks in performance and range, it makes up for in sophistication, brand cache, and style. Its cabin is just as, if not more attractive than its exterior, let alone impeccably well put together. Unlike a Tesla Model 3 which has nothing else to look at except an LCD screen, the I-PACE’s cabin is immensely sporty, attractive, and refined.  I personally love that floating centre console comprised of half LCD screen, half physical controls. It activates climate control and other shenanigans. The infotainment system is just as confusing to operate than in other Jaguar Land Rover products though. 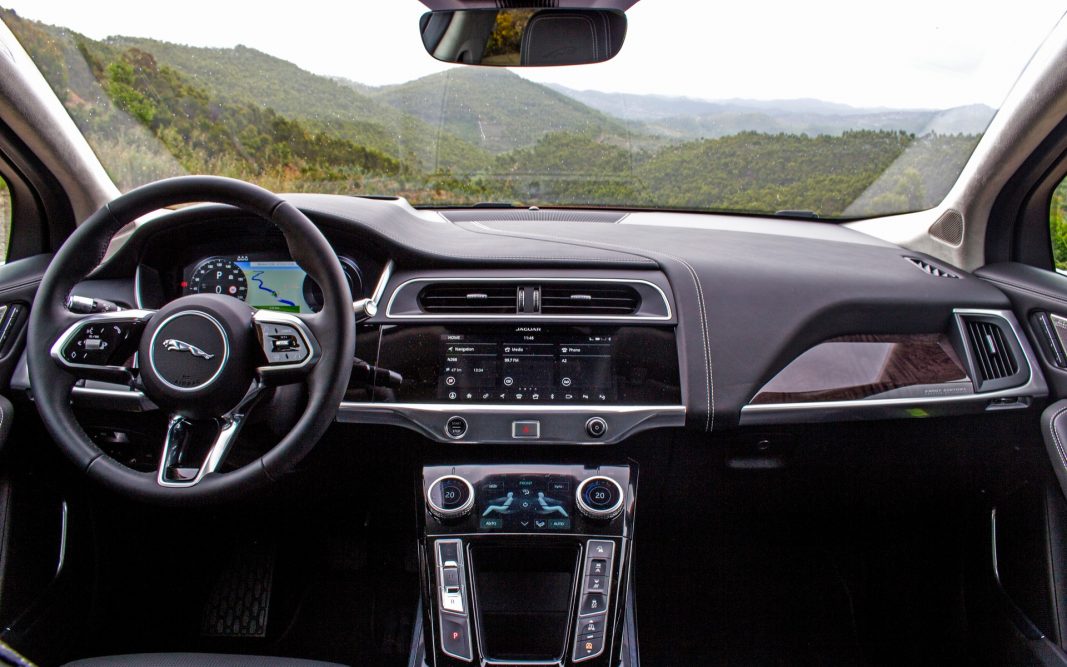 Then there’s the way the thing feels behind the wheel. I drove the I-PACE across Portugal, on public roads, highways, dirt roads and even on a race track. That’s me with a helmet transforming my face into a chipmunk. 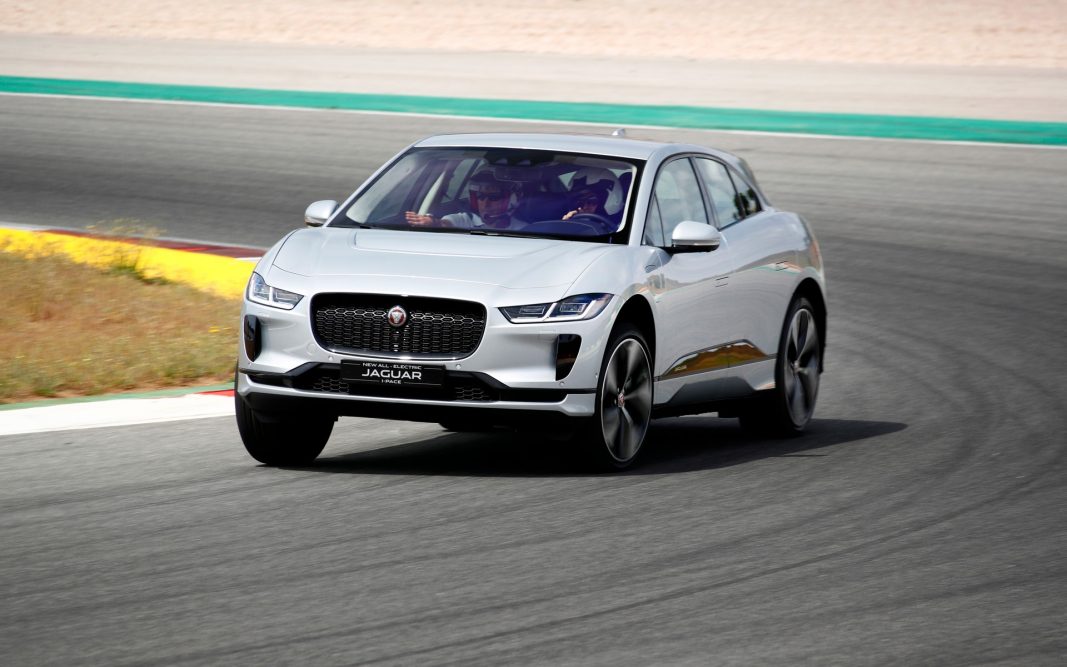 The I-PACE’s road manners are impeccable no matter how you drive it. It feels solid on the road thanks in part to its heavy batteries sitting down low in the centre of the vehicle, and its all-wheel drive system is witty, allowing it to claw its way around pretty much any bend, generating massive amounts of G forces along the way. Granted, the Model 3 is an advanced machine, but the I-PACE is an electric car that was engineered by automotive enthusiasts, and it shows.  This thing is a shit ton of fun to drive. 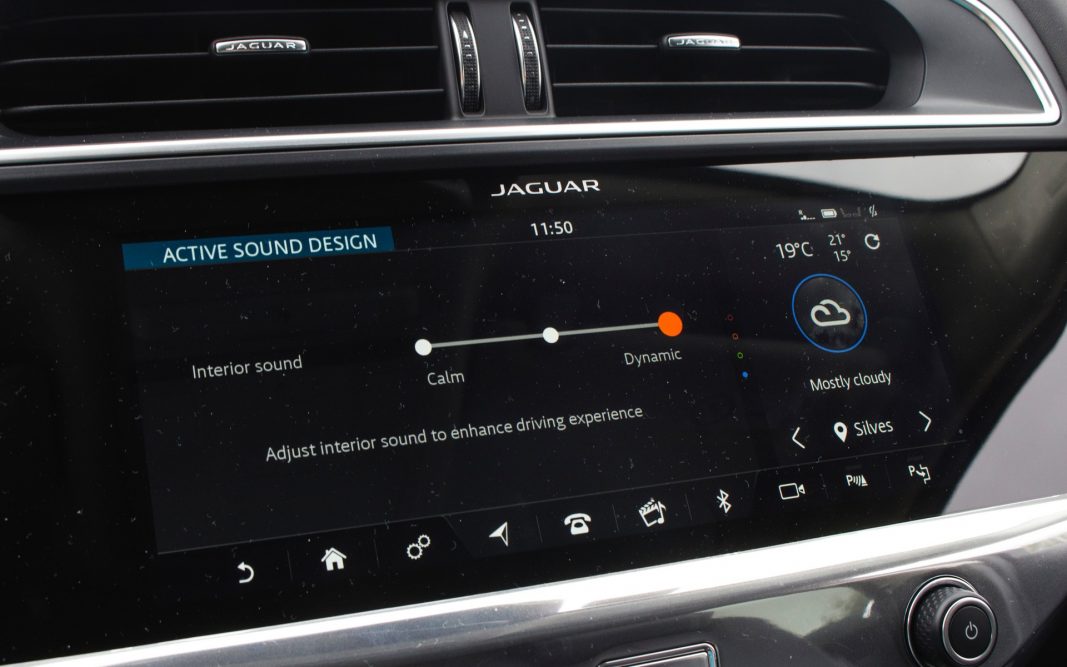 It also sounds like nothing else I’ve had the opportunity of hearing in a car before. Jaguar fitted the I-PACE with what it calls Dynamic Audio. Yes, it’s a fake engine sound that makes its way through the car’s speaker system. You can even make the sound louder through the vehicle’s settings. A gimmick you might say, an abomination of the automotive industry. You’re wrong. 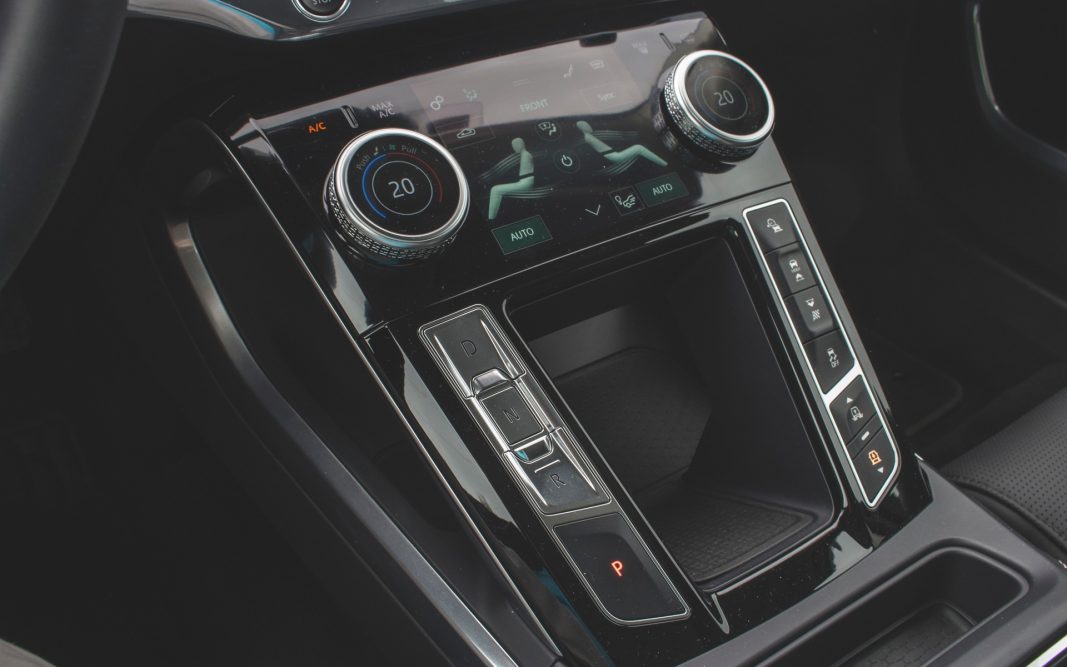 It gives the I-PACE a proper futuristic tone, a sense of purpose, and I’m suddenly not afraid of the future anymore. If anything, I wanted to keep flooring the throttle to hear more of this synthetic sound, as it made the hairs of my forearms rise, and my adrenaline level up to speed as my entire body would move rearward upon the instantaneous thrust of the electric motors. This is coming from a dude who absolutely loves the sound of an organic V8 engine. And here I was, sitting in a giant iPad on wheels with a giant smile plastered on my face from the feeling of artificial decibels bouncing off my eardrums.  What a world we live in. 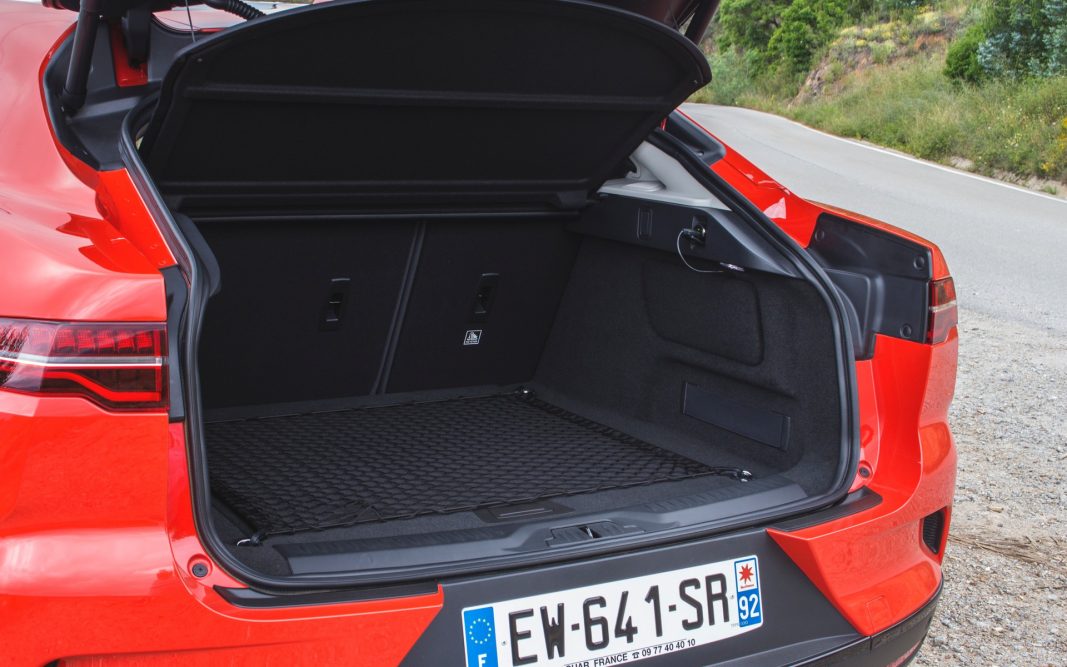 Finally, there’s the fact that the I-PACE is roomy as heck. The rear bench has plenty of room for three adults, and that trunk will ingulf up to 1,472 litres of gear once the rear seats are folded flat. That’s quite a bit more than a Model 3, and on par with some compact crossovers out there.

So here’s the verdict: you’re not getting more for your money with the I-PACE than a Tesla Model 3, but you are getting something the a Tesla still doesn’t know how to deliver: a soul. The 2019 Jaguar I-PACE has Jaguar’s lineage sweating all over its beautiful body. It’s engaging to drive. Immensely attractive, fast enough, and an absolute hoot to drive, and does it all without relying on petrol. This is why it’s currently my favorite electric car.