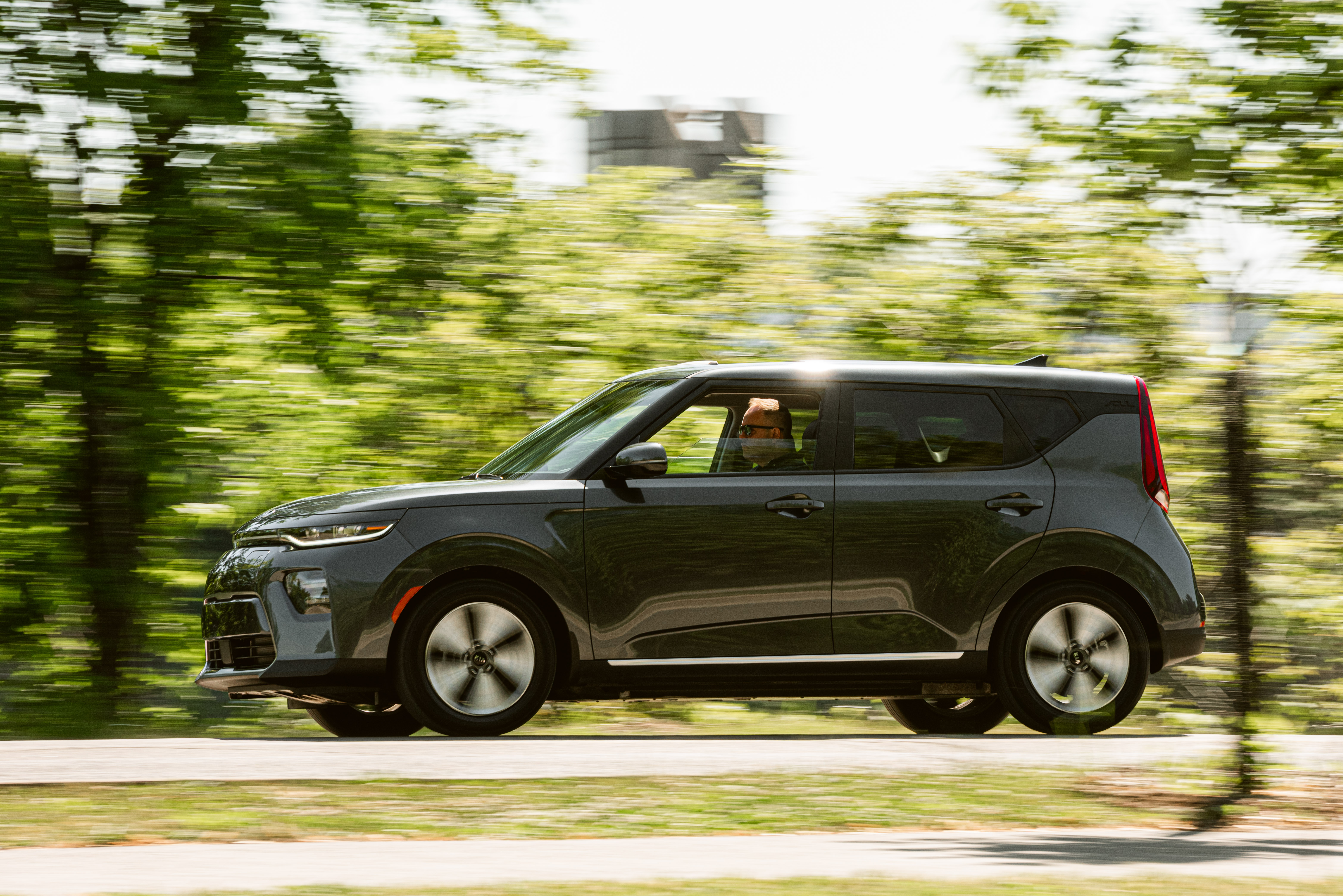 The 2020 Kia Soul EV helped me save money when buying new wheels for my MINI Cooper. Yes, you read that right, I now own a first-gen R50 MINI, a result, if you will, of being confined at home due to COVID-19. I’ll be writing about my Cooper soon, but what you need to know is that this electric Kia played a large role in getting me MINI aftermarket parts for cheap. 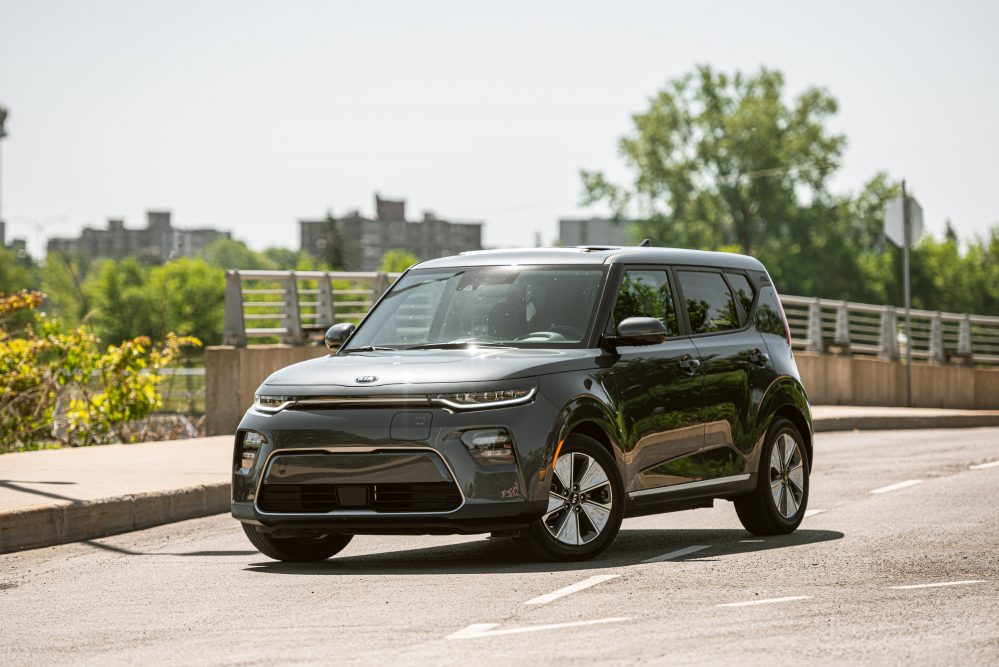 Many will tell you that for an electric car to be convincing to consumers, its range needs to be of at least 400 km. I tend to agree as I’ve myself driven several different types of EVs, and with the kind of weather we have here in Canada, I say 400 clics should in fact be the EV norm. 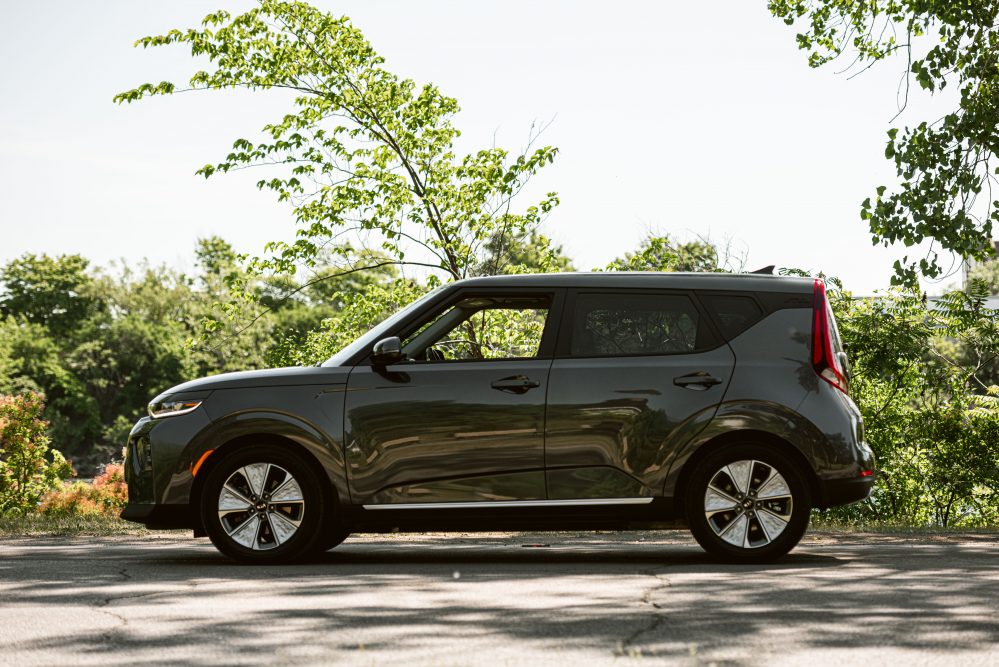 Anyway, the reason this 2020 Kia Soul EV helped me get those wheels for cheap is because they were 600 km away. Getting to them either involved having them shipped, or driving for an entire day. In both cases it involved adding extra costs to my final transaction. 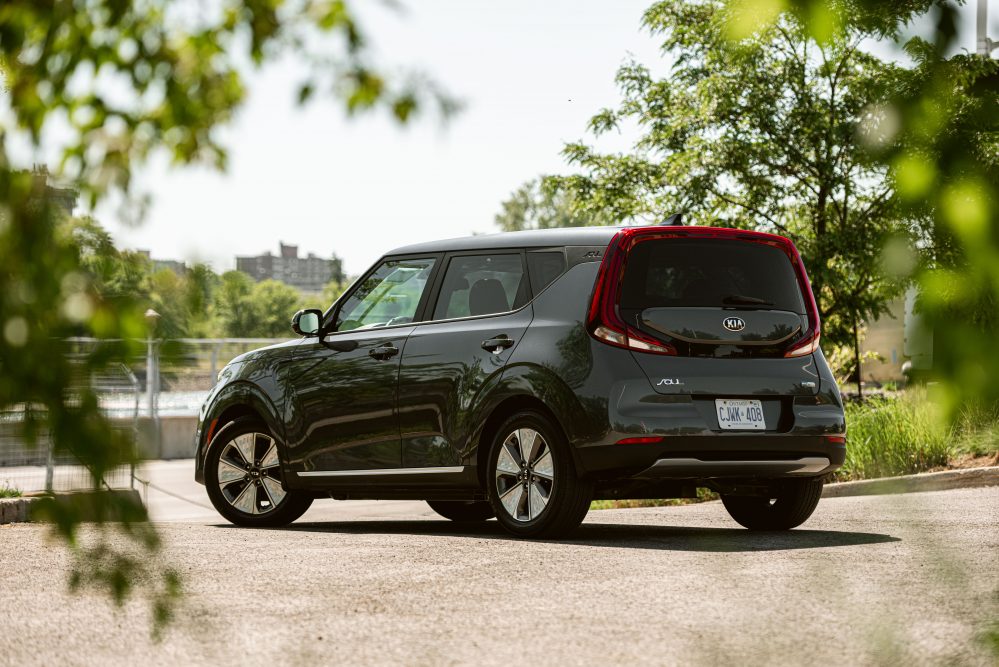 However, driving there in an electric car like this Kia would only cost me about 50 bucks of electricity in total. That’s mostly due to Québec’s established charging infrastructure, which allowed me to charge up to 80% within 45 minutes on a 400-volt fast charger. In comparison, a gasoline automobile would have cost me at least $100 in gaz bills for the same adventure. 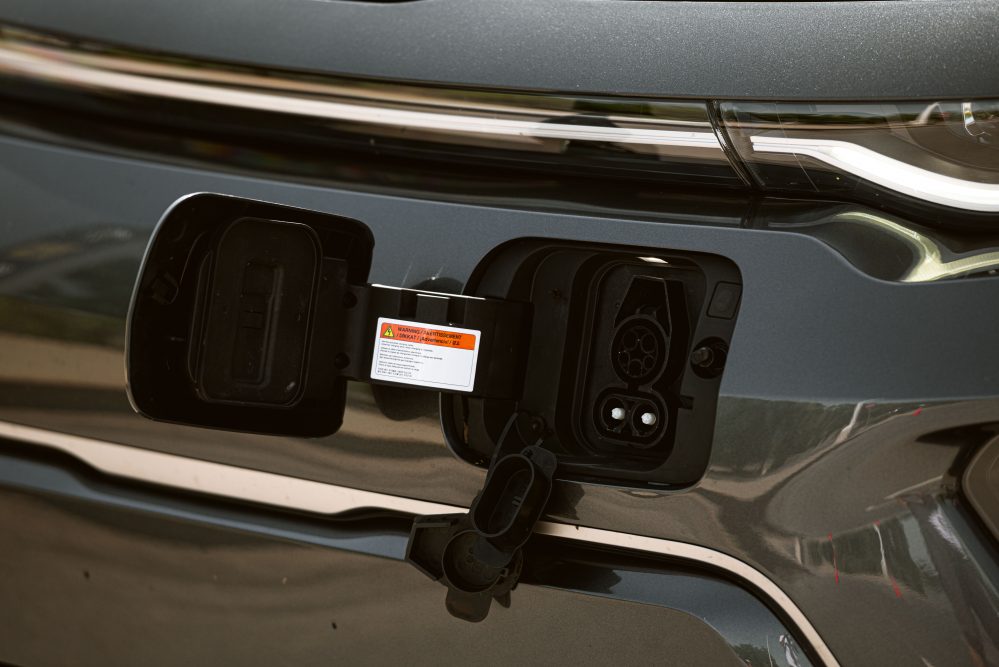 The Soul EV’s 64 kWh battery certainly helped too, as 400 km of total range ensured I could cover more than half the distance before having to connect to a plug. 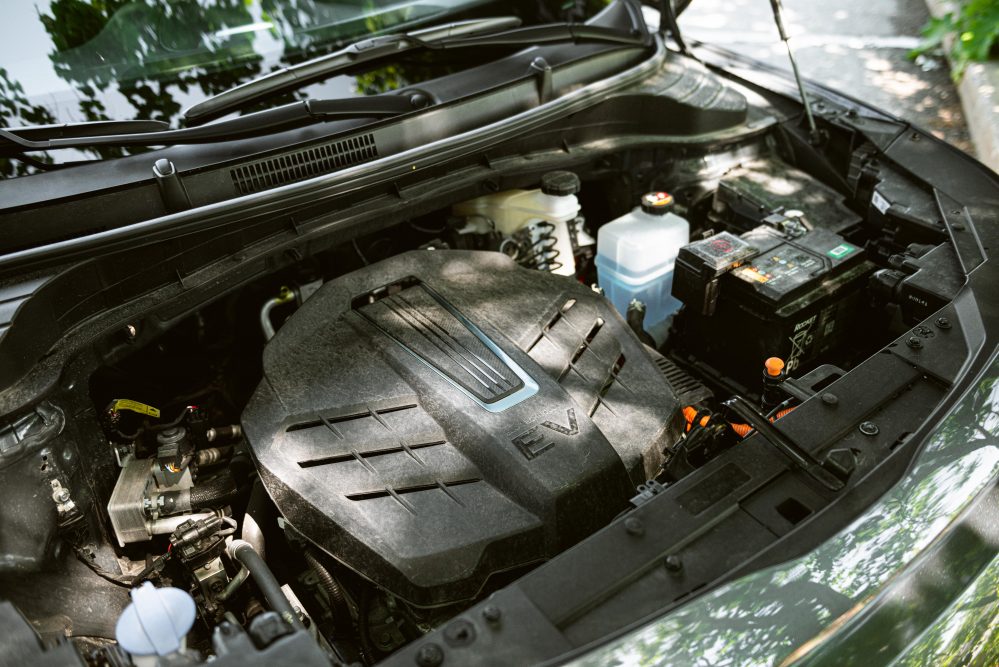 Essentially technically identical to the Kia Niro EV and the Hyundai Kona Electric, the 2020 Kia Soul EV pumps out the same 201 horsepower and 291 lb-ft of torque, but in a boxier, funkier and a tad more practical package. You guys probably already know what I think about the standard Kia Soul, which is why I find this to be the most interesting of the three available South-Korean EV offerings. Its only real downside is a higher than expected entry price of $44,505. 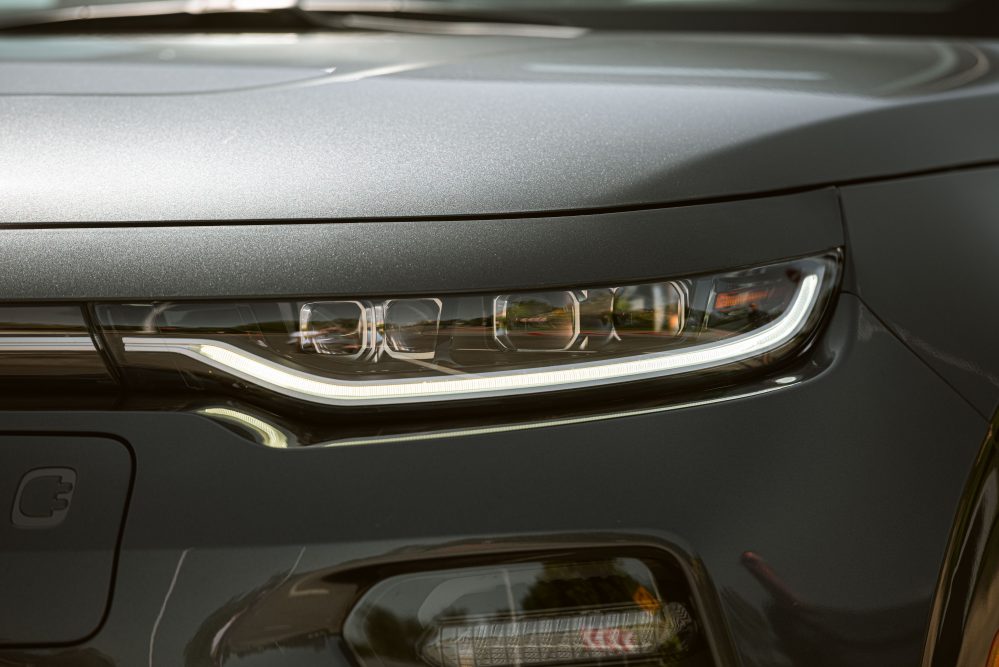 There’s also a Limited model that stickers for an even more ridiculous $53 505, which is exactly the same price as a Tesla Model 3 Standard Range Plus, a sleeker, more technologically packed and quicker EV overall. At least this Kia is more practical than the Tesla, also better built, and here in Québec it’s eligible to a $13,000 EV rebate. But don’t get the top-spec Limited trim, it’s just not worth it. 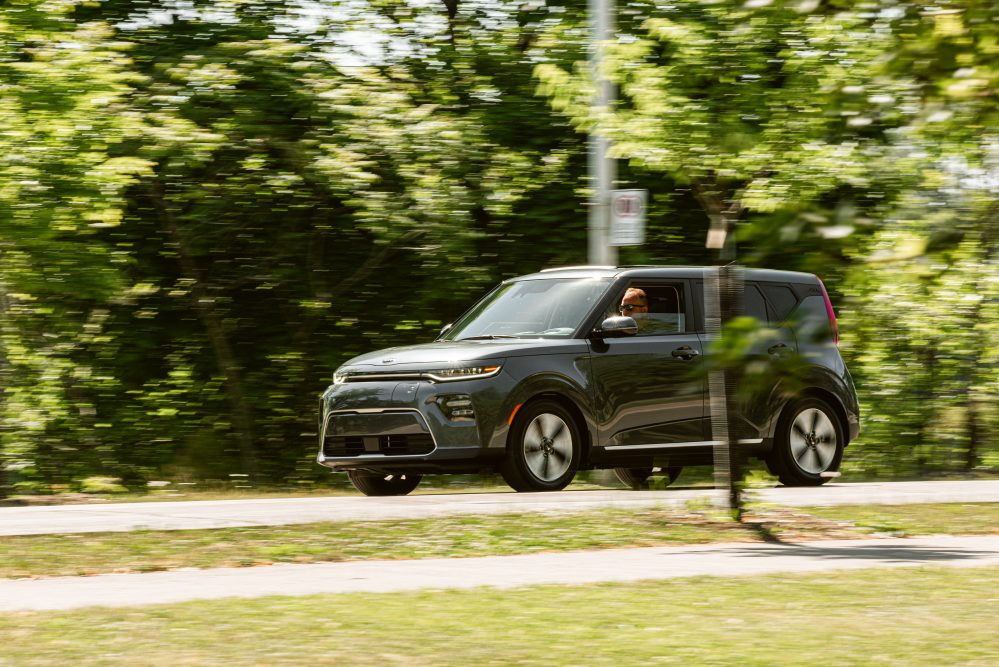 It’s no secret now that I’ve been impressed by Kia’s latest offerings. Its cars drive well, look decent and offer a surprisingly good level of refinement considering how much you’re typically paying for them. The Soul EV simply carries over these qualities. Although I do find the price tag rather ridiculous when comparing it to its gasoline-powered equivalent. 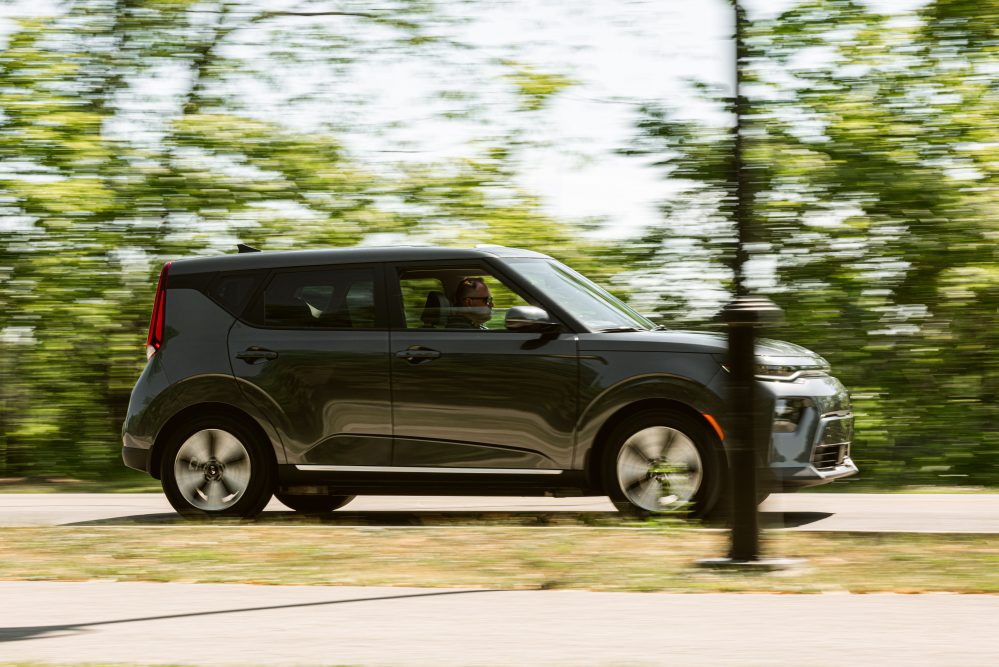 Power is ample and immediate, a now expected EV characteristic, allowing this box on wheels to squirt effortlessly around traffic. Acceleration from a standstill to 100 km/h is performed in under seven seconds, which is decent. But it’s the Soul’s playful chassis and nimbleness that allow it to rank high in my books. 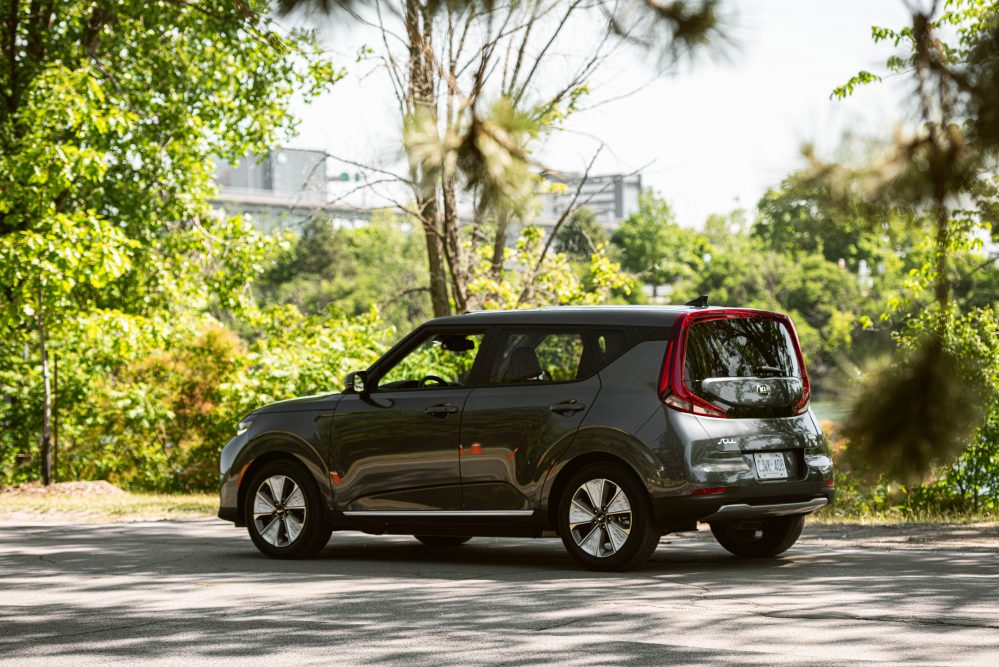 It’s just one of those urban runabouts that you can downright drive hard through a corner without flipping over or running out of grip. That low center of gravity due to the batteries does a lot to contribute to it all. 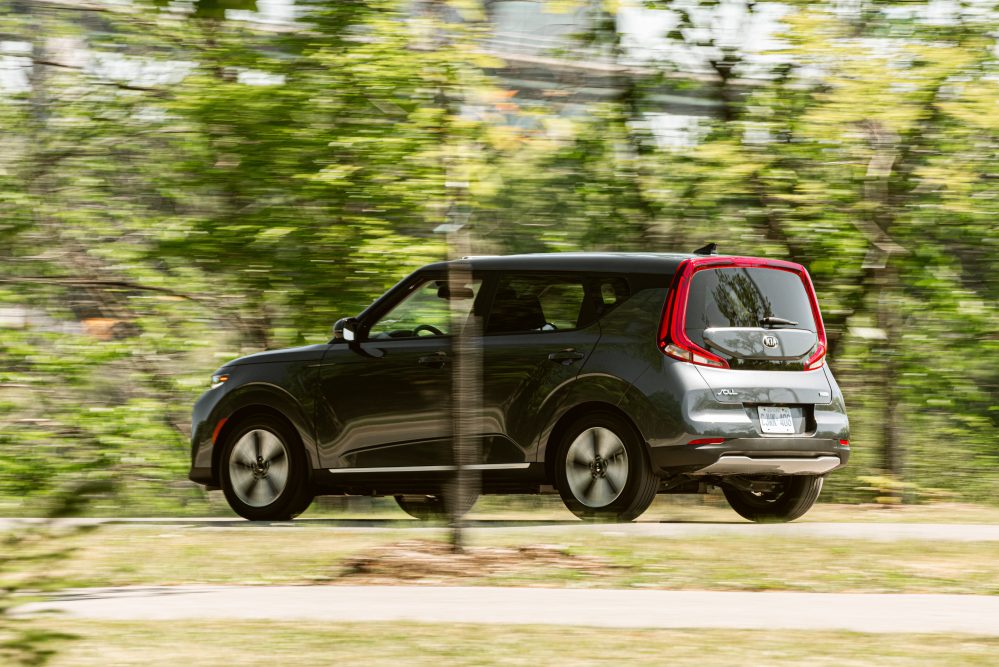 The Soul’s trendy looks are carried over inside where appealing motifs and shapes make it a rather enjoyable place to spend some time in. I however continue to believe that the Soul should only be available in bright, flashy colors. The Gravity Grey and black interior of my tester just tones down this crossover’s otherwise playful personality. 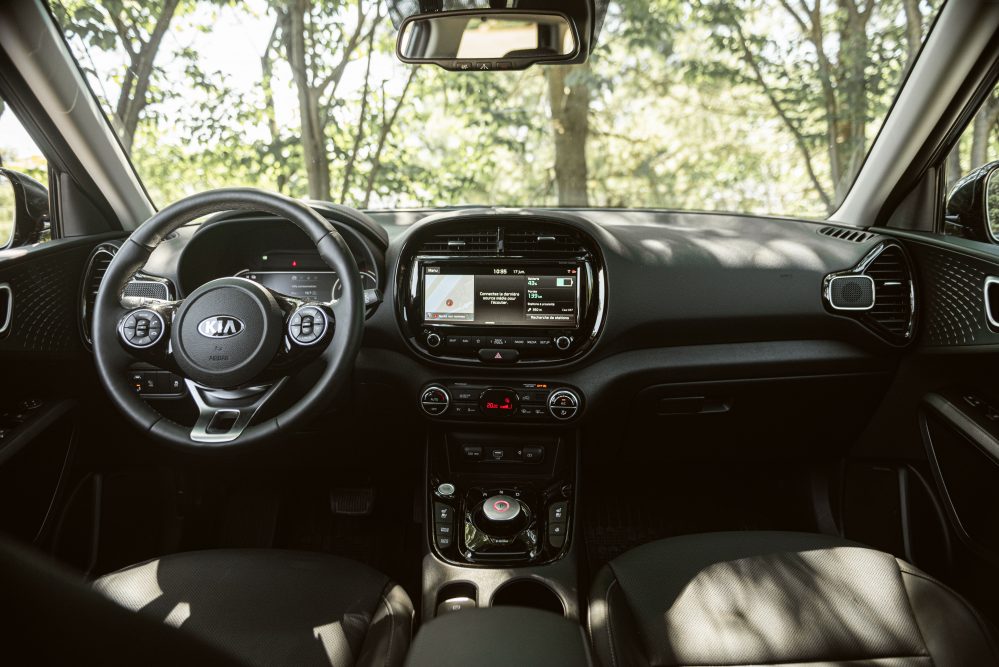 Kia continues to dominate cabin ergonomics, where all controls are simple, intuitive and easy to grasp. There’s just a level of downright common sense here that makes you wonder why other brands – especially the Japanese – still haven’t caught on. Also, except for the weird wheels, which actually improve the vehicle’s overall efficiency, there’s nothing about the Soul EV that reveals it’s electric. It’s just like any other car, and that’s great. 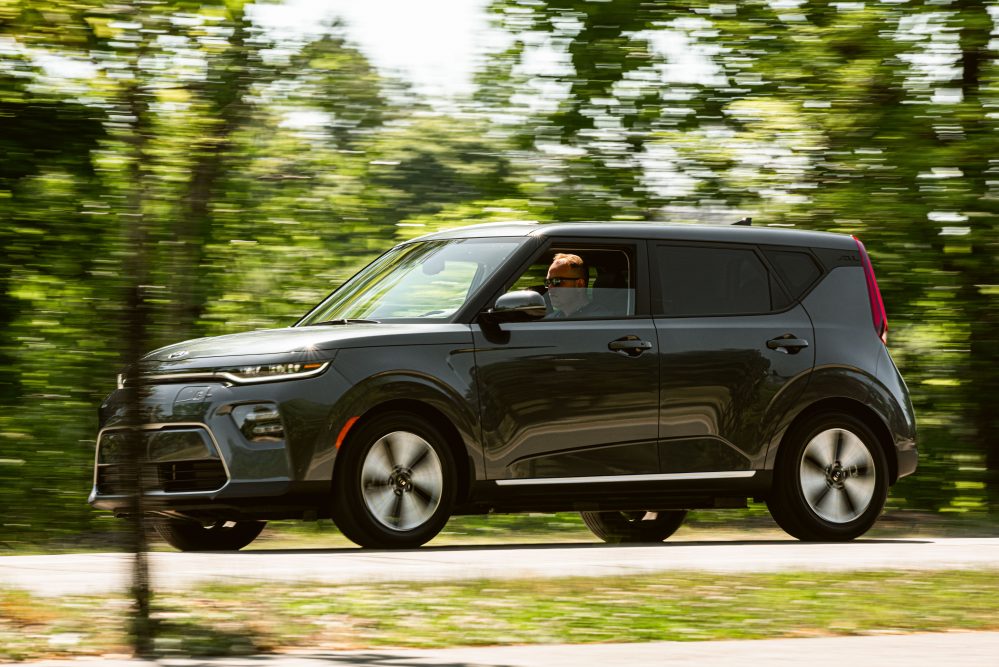 I will however say that I was disappointed by the Soul’s hard seats during a long highway roadtrip. I also wish Kia would offer a bit more flexibility in the trim structure, as there aren’t many individual packages available, but rather one super-expensive top-tier model. 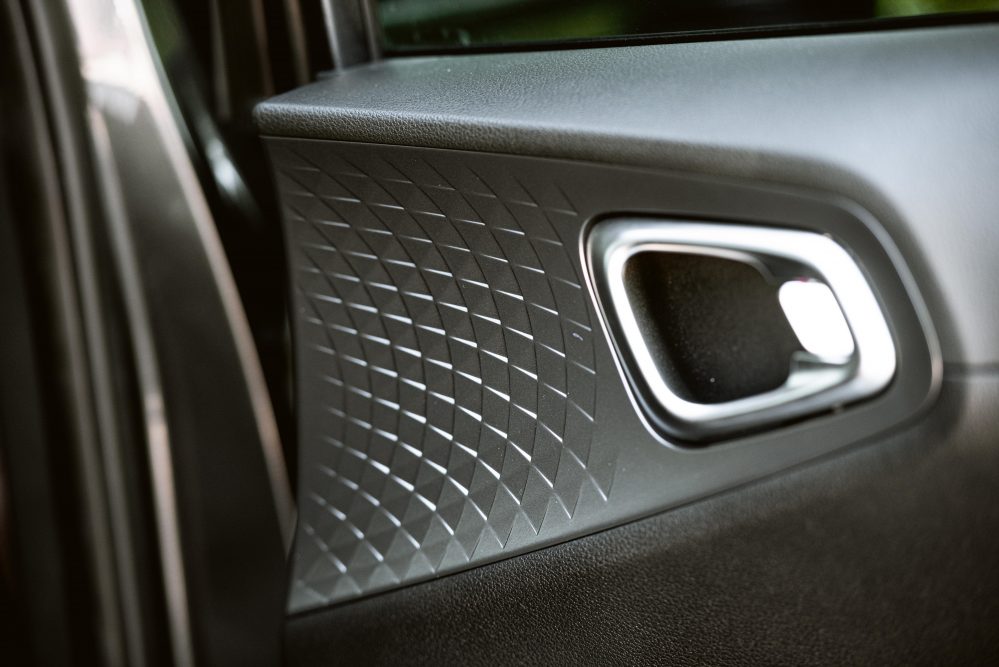 The infotainment system is the standard Kia affair through a clear, straight-forward and uncluttered interface. Icons are large, menus are intelligently designed and the system’s touch controls respond quickly, but the brand is due for something a little more modern, which we’ll see in the upcoming K5 sedan. 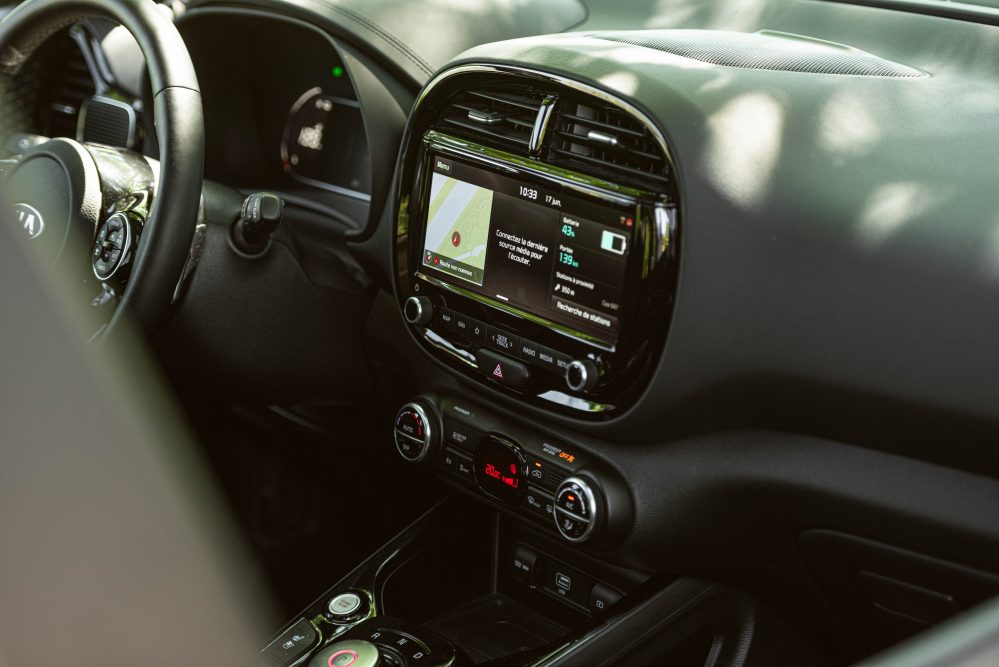 Like the Niro EV, the Soul EV gets three levels of regenerative braking, which can be modulated via steering-mounted paddles. Each mode provides a fair amount of resistance according to the situation. Hold onto the left paddle and the system acts the same way as the Chevrolet Bolt EV or Nissan’s e-Pedal in the LEAF. allowing you to drive the Soul EV with one foot. 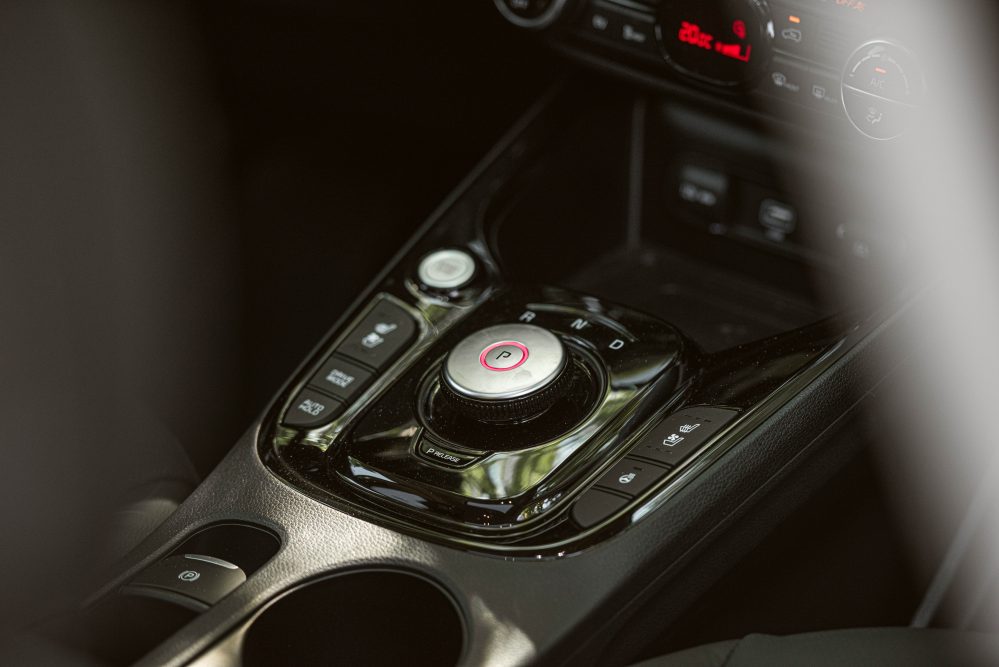 Holding back the right paddle turns on the Auto mode which modulates braking resistance on its own. Thanks to all these features, Kia currently offers the most complete regenerative braking system of any carmaker, including Tesla. 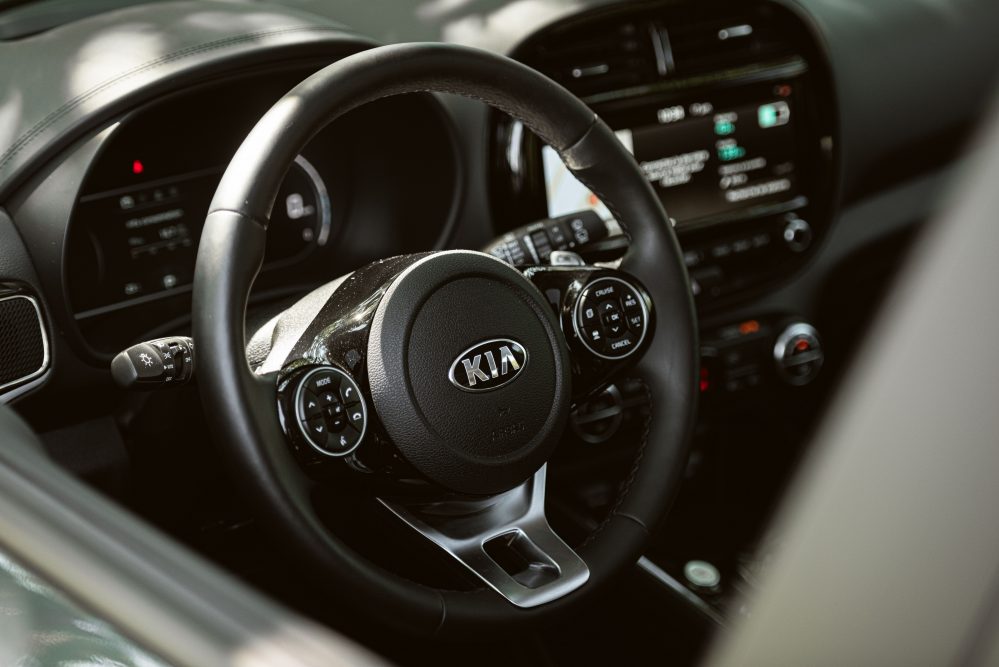 Unsurprisingly, rear seat room is good due to the car’s high roofline, but legroom could prove a little tight for tall passengers. This is a compact car after all. However total cargo space is where the Soul EV trumps all EVs of this price range at 1,758 liters. That’s actually better than its mechanical twin, the Niro EV (1,543 liters) and the Chevrolet Bolt EV (1,602 liters). Although I was disappointed to not find an entirely flat floor when lowering those rear seats. 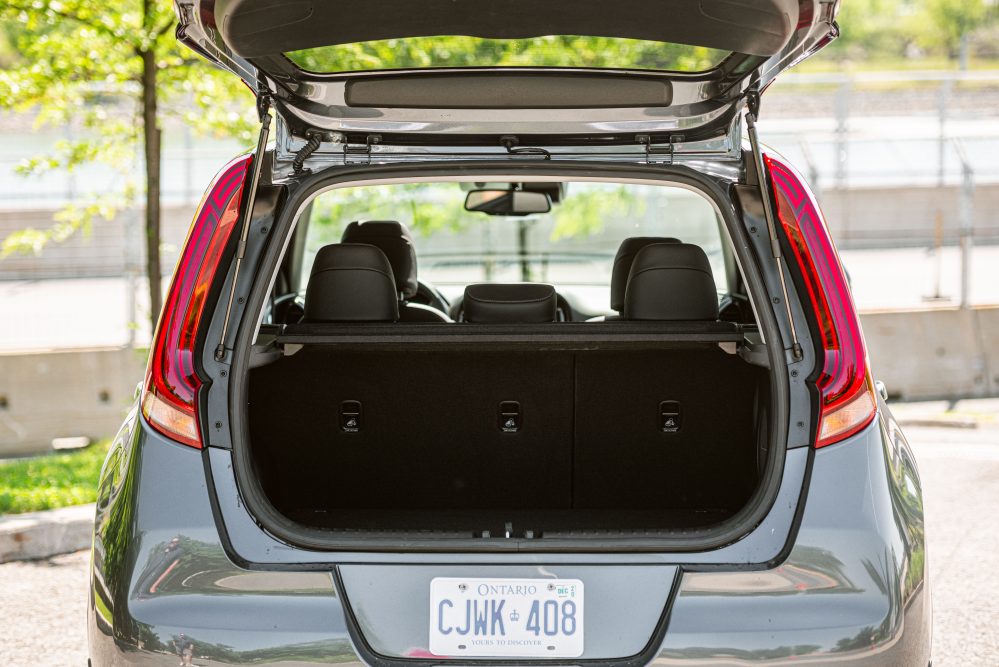 Essentially, though, what the 2020 Kia Soul EV made me realize is that range anxiety is now a thing of the past. A 400-km full-electric range is way more than most people need anyway. Most of the time I had the Soul, it was parked in my driveway unplugged, and it never worried me. 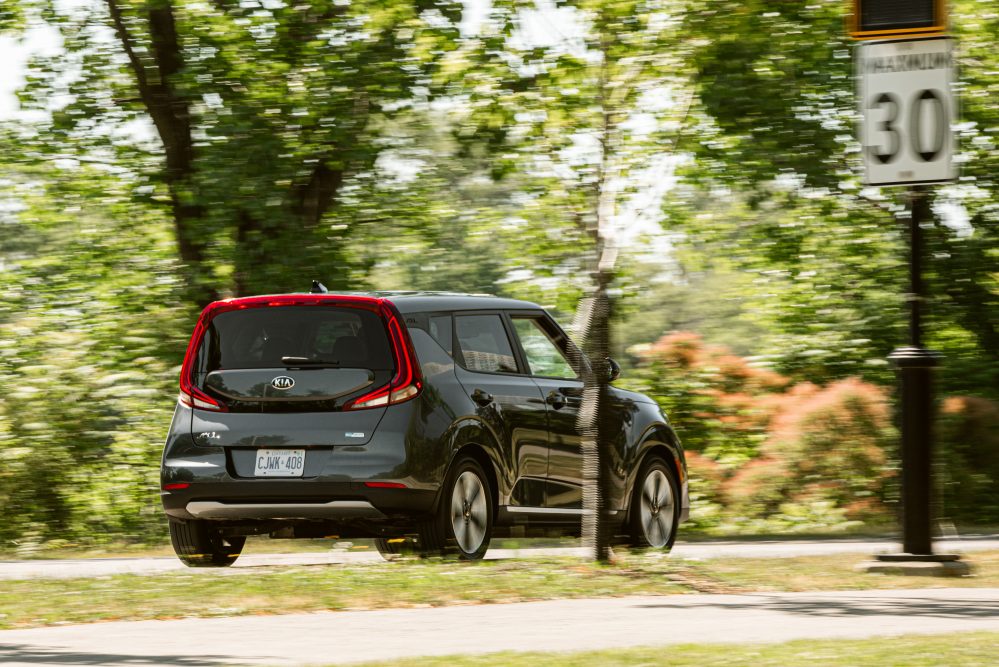 In a place like Quebec where you can find nearly 3,000 charging ports at less than twelve dollars per hour, there are very few arguments that go against buying one of these as your daily driver. As for opting for this Kia Soul EV over any other electric car out there, I say that, yes, paying nearly 50 grand for a Soul is a lot, but it’s also hard to ignore how good this little bugger actually is.