The 2021 Mercedes-AMG GLA45 is one of those bonkers SUVs that don’t belong in this world. Seriously, who needs a subcompact SUV with almost 400 horsepower under the hood? Nobody. But the sheer fact that the maniacs over in Affalterbach have created such a monstrosity is absolutely wonderful. 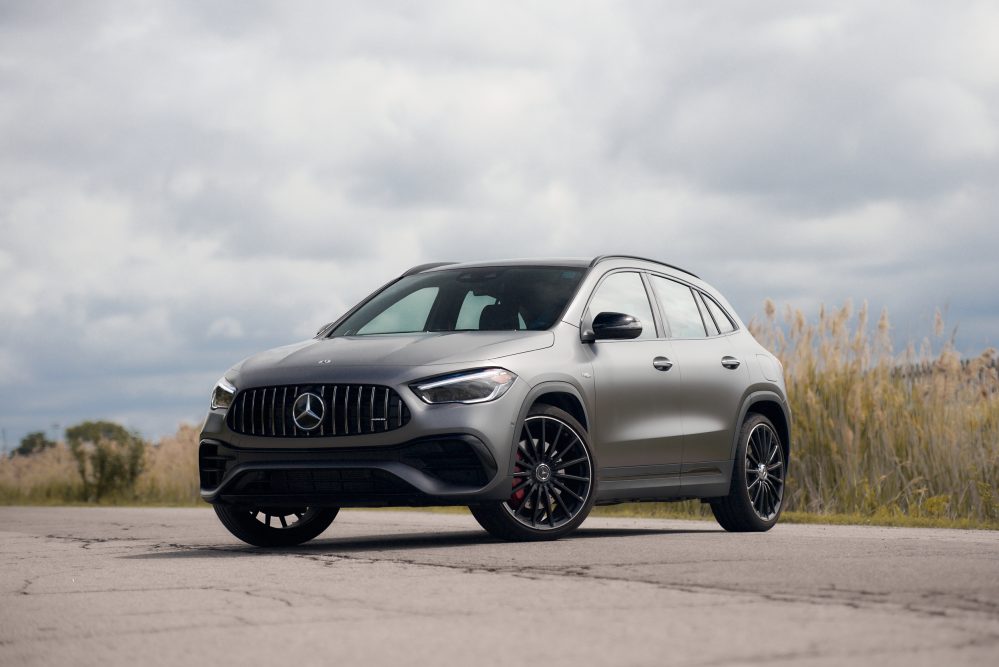 Compared to the last-generation GLA, this new model, which was introduced for the 2021 model year, harvests a more SUV-like demeanor. In other words, it doesn’t look like a glorified hatchback anymore, even though it shares a platform and most of its internals with the Mercedes-AMG A35. The new GLA stands taller, appears blockier and, from some angles, looks a little goofy with its stubby rear end, bulbous hood and tall wheels that seem to be floating inside the gigantic fender flares. 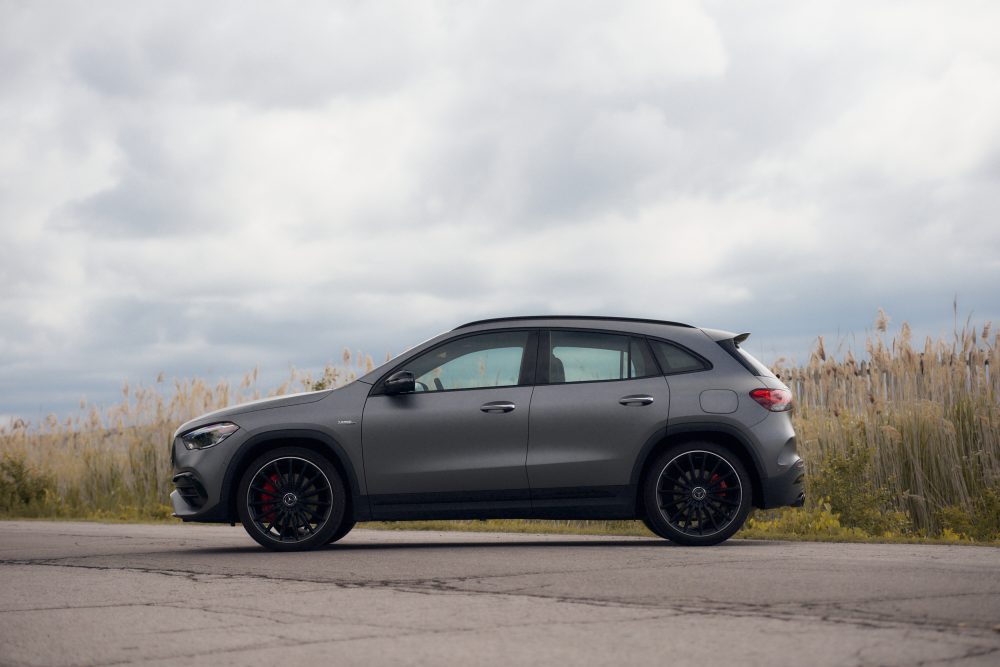 In terms of looks, I personally much prefer the GLB, which is essentially the exact same thing as this but enveloped in a more squared off, adventure-seeking “mini G Class” shape. Whichever poison you choose at Mercedes though, both of its subcompact crossovers gives consumers a lot of configurations to play with, from a lukewarm 250 model all the way to this fire-breathing AMG 45. 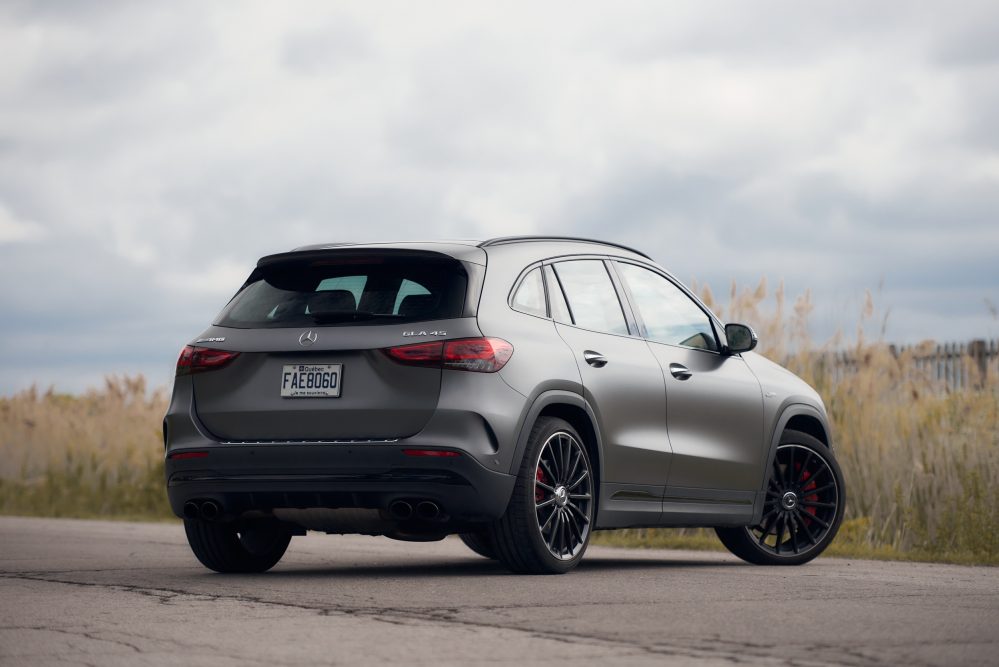 What’s a 2021 Mercedes-AMG GLA45, you ask? It’s the fastest, most potent GLA you can buy, one that’s been carefully massaged by the wizards over at AMG, Mercedes’ performance arm. Underneath its hood lies an engine that also powers the AMG CLA45, also known as the M139 engine. It’s a big deal because it’s currently the most powerful production four-cylinder engine in the world, boasting a massive 191 horsepower per liter.

Its displacement may be small at 2.0 liters, but this turbocharged four packs more formula-inspired technology than some super expensive supercars. AMG basically took the M260 engine out of a GLA35 and fortified it at several key locations. For instance, it features an AMG-specific block and cylinder head design. Its intake and exhaust ports are opposite to that of the GLA35, and the twin-scroll turbocharger itself is larger, but also located behind the engine near the firewall, with an intake plenum sitting in the front. This, according to AMG, optimizes airflow and improves cooling, leading to more power and torque. 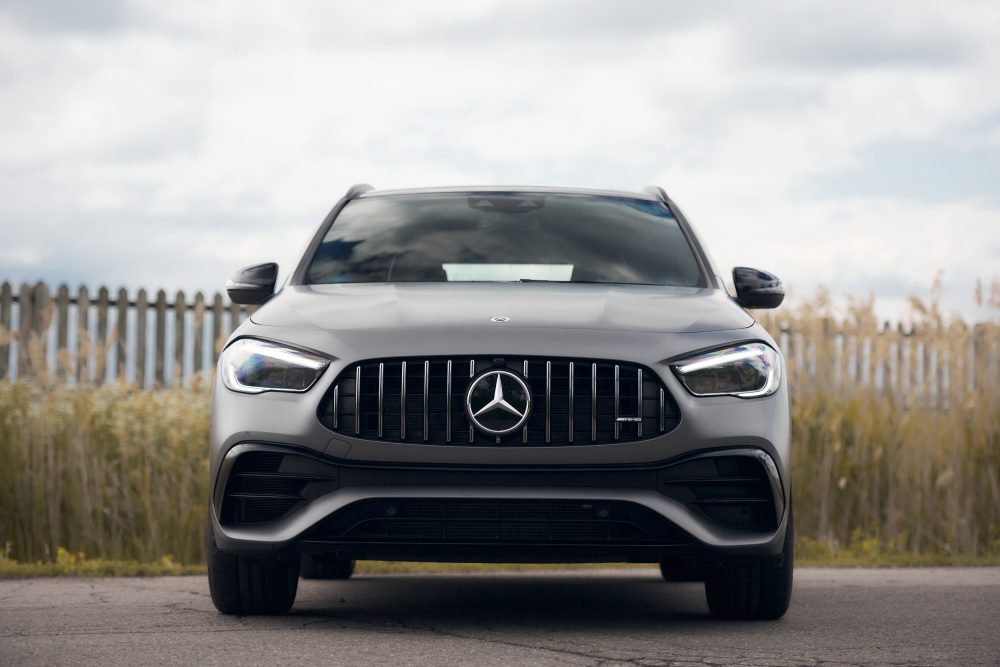 Final output is nothing short of extraordinary. The GLA45 is rated at 382 horsepower and 354 lb-ft of torque. What’s more, the entire powerband is different than in a 35, with peak power arriving at 6,500 rpm and torque going full boil between 4.750 and 5,000 rpm. All of it is bolted to an eight-speed dual-clutch automatic transmission and 4MATIC all-wheel drive. Thanks to launch control, this subcompact crossover will launch to 100 km/h in 4.4 seconds. That’s properly quick. 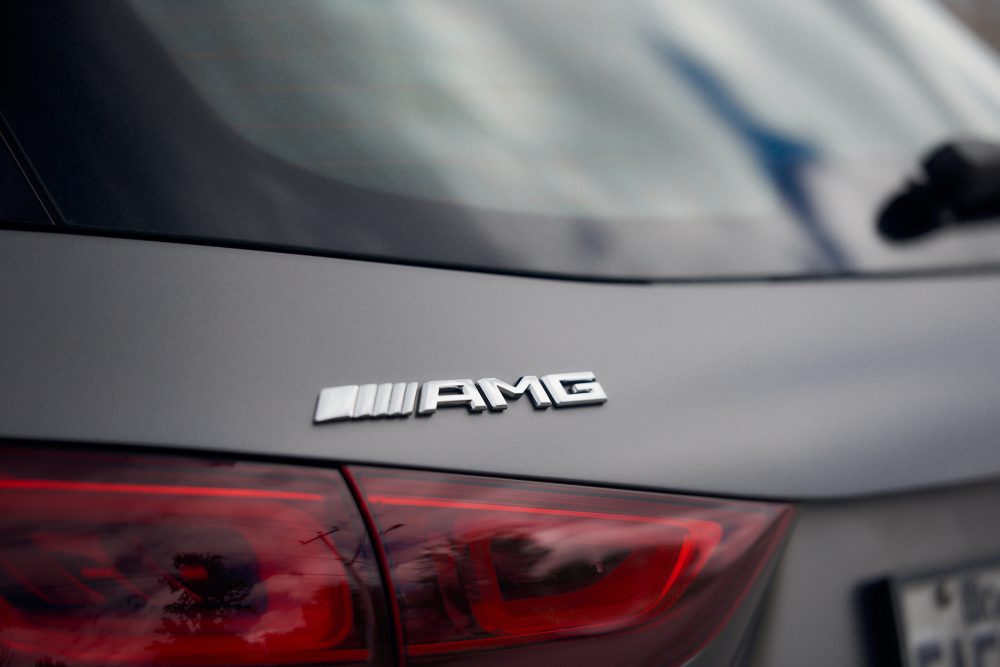 In typical Mercedes fashion, the price for one of these isn’t cheap. The GLA45 kicks off at an already steep $60,500. but the one I was driving was stacked with optional packages and covered in the badass Designo Mountain Grey Magno matte paint job (a $2,500 option). The final sticker price for the one you see here was $76,750. 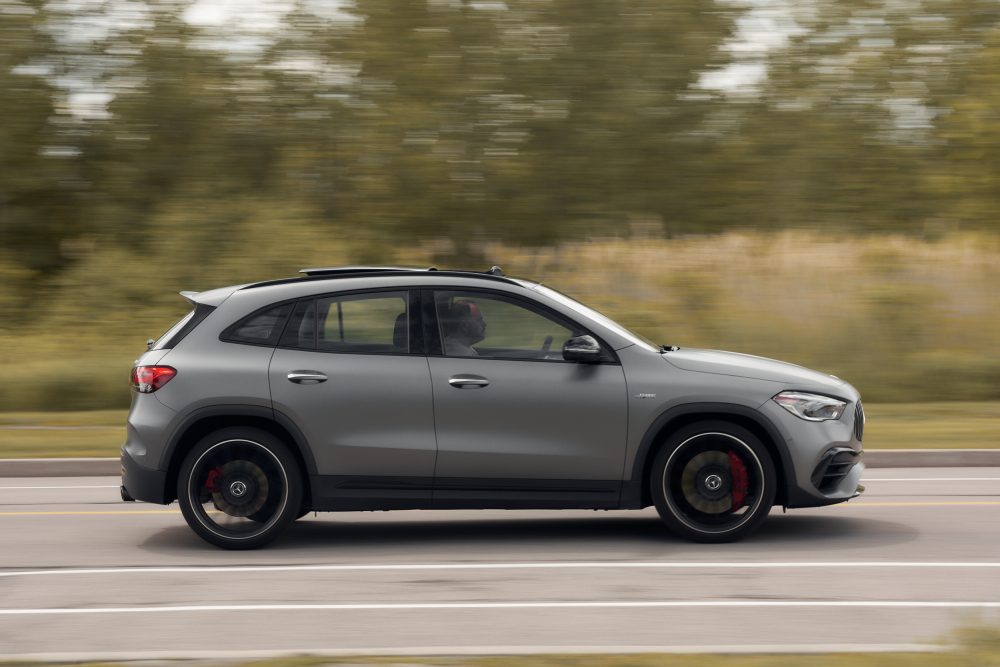 I have a confession to make: I didn’t know I was driving a GLA45 until I actually floored it on the highway. I know, weird. This is unfortunately the reality of being an automotive journalist. We tend to be at 5o places at once. During some weeks, I can end up sitting behind the wheel of five different cars. Plus, when I had originally booked this thing, the email only read “GLA”. There was no indication it would be an AMG. When I got in, I didn’t take the time to check the badge, so I was certain I was driving a GLA35 instead.

Until I gunned it. 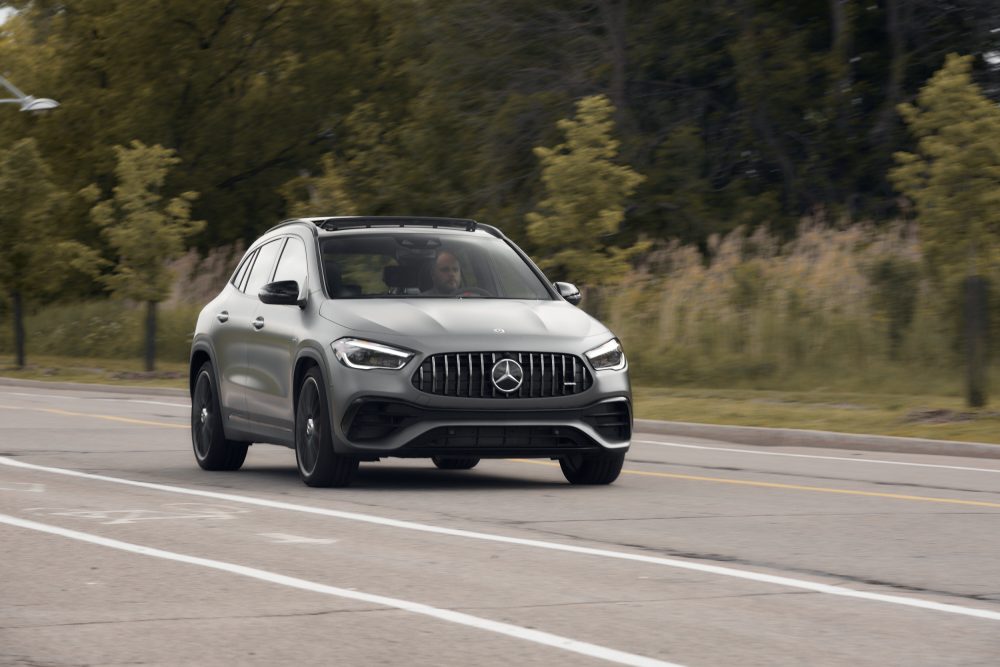 And boy did it fly! It was at that moment that I remembered how visceral the CLA45 had been with that engine. It was all so familiar, the revs, the torque, the sound and the urgency. Gun the throttle in Race mode, and this cartoonish machine shuffles down a few gears within milliseconds, shoves the revs up high in the powerband and throws you deep into your seat. 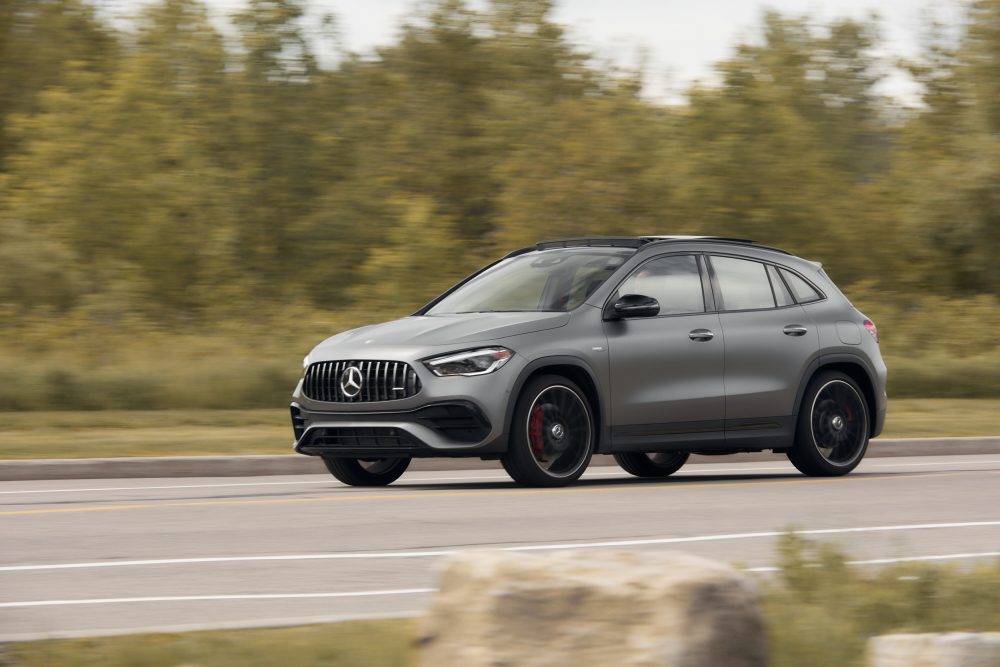 The power delivery is relentless, and the entire cabin quickly fills up with a loud raucous only an overfed four-cylinder can create. This is by the far the most immature drivetrain AMG has ever produced. It’s never as smooth or creamy as one of its V8s or even six-cylinders, but its bad boy attitude allows it to be just as charming. 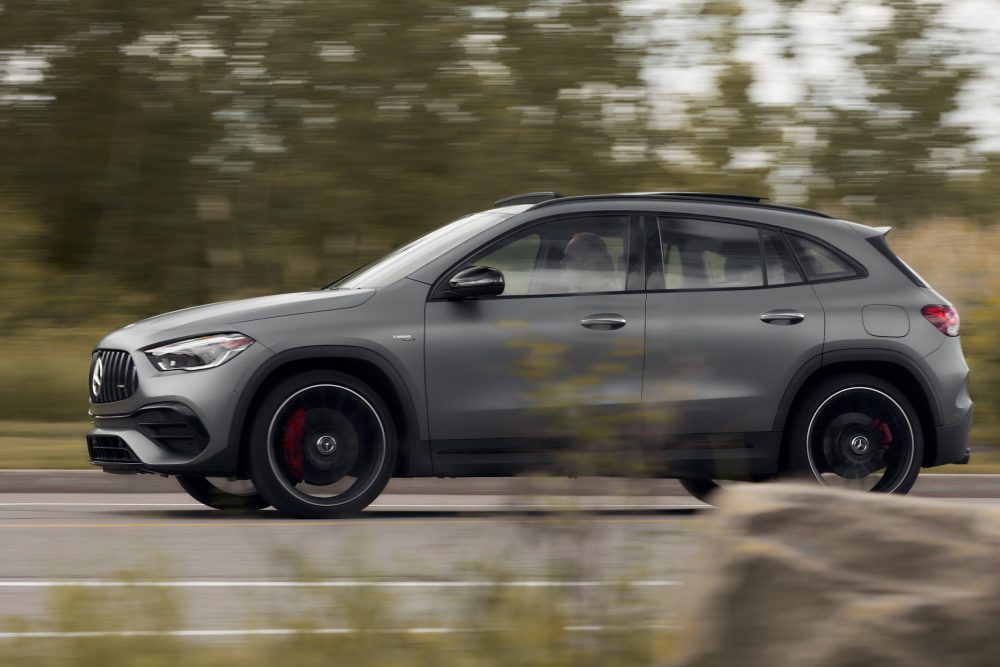 Being lifted off the ground means the GLA45 exhibits a fair bit more body roll than the cars on which its based, but the level of grip it can produce in a corner is still astonishing. There are also trick differentials underneath its truckish skin, allowing it to send most of its power to the rear wheels when need be. In other words, you can coax the GLA45 in a graceful drift maneuver if that suits your fancy.

The 2021 Mercedes-AMG GLA45 gets a punchier interior than a standard GLA thanks to red accents and seatbelts as well as meatier, sportier steering wheel, but it’s never too flashy nor too flamboyant. Like all modern compact Mercedes vehicles, the design itself, overall presentation and chrome accents really help make everything appear upscale and expensive. Unfortunately some cabin materials feel flimsy and there’s some annoying cabin cracking when driving over rough roads. Also, while the GLA has a more compliant suspension than an A or a CLA Class, it’s still way too stiff for the realities of daily driving. 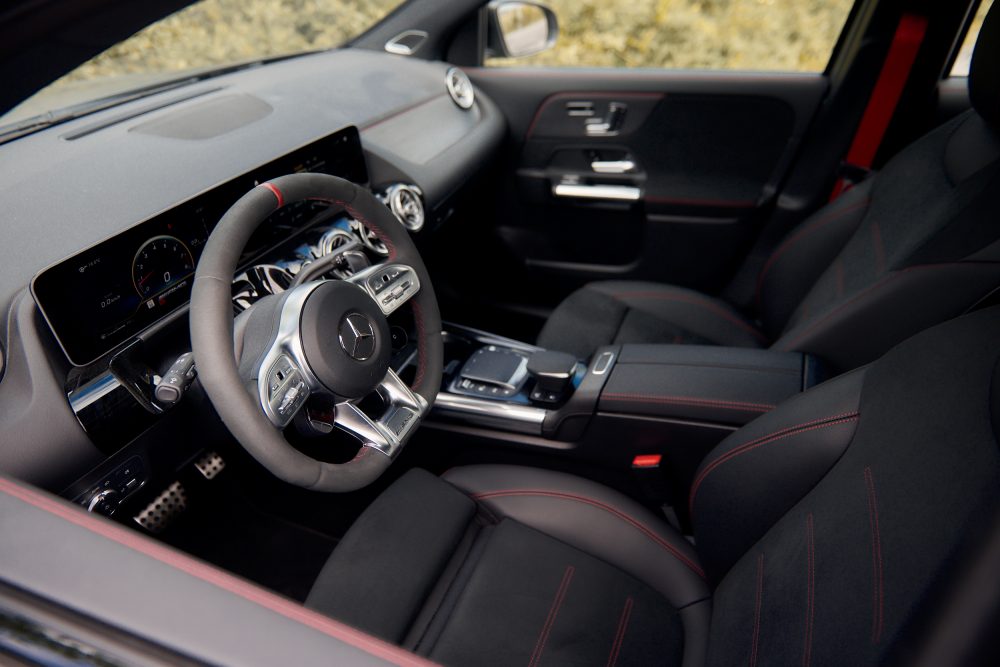 Overall cabin comfort is excellent, however, and rear leg and headroom are generous thanks to the more squared off roofline. The AMG sport bucket seats continue to be massively comfortable and supportive, while looking like a million bucks along the way. The full digital dashboard remains a pleasing touch. That said, Mercedes’ touch-pad operated MBUX infotainment system remains hard to comprehend due to its inconsistent voice commands and tedious steps to accomplish simple tasks. 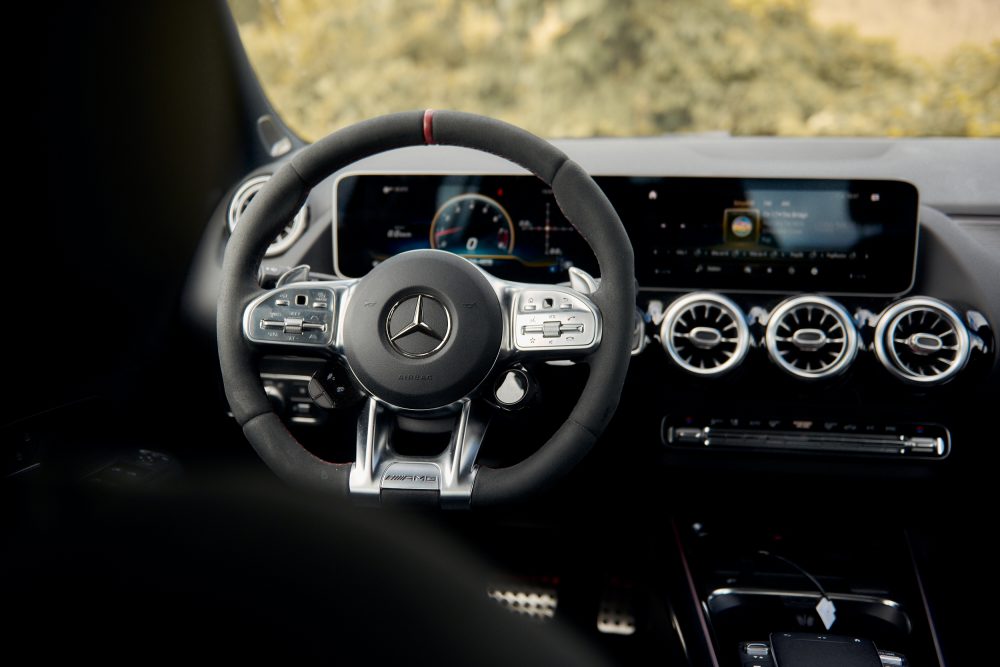 As for cargo space – the quintessential reason why one would choose an SUV over a car – the GLA45 is considerably larger than the A-Class on which it’s derived. For reference, it’ll engulf up to 1,430 liters of your gear when the rear seats are folded flat, compared to the A-Class’ 1,210 liters. 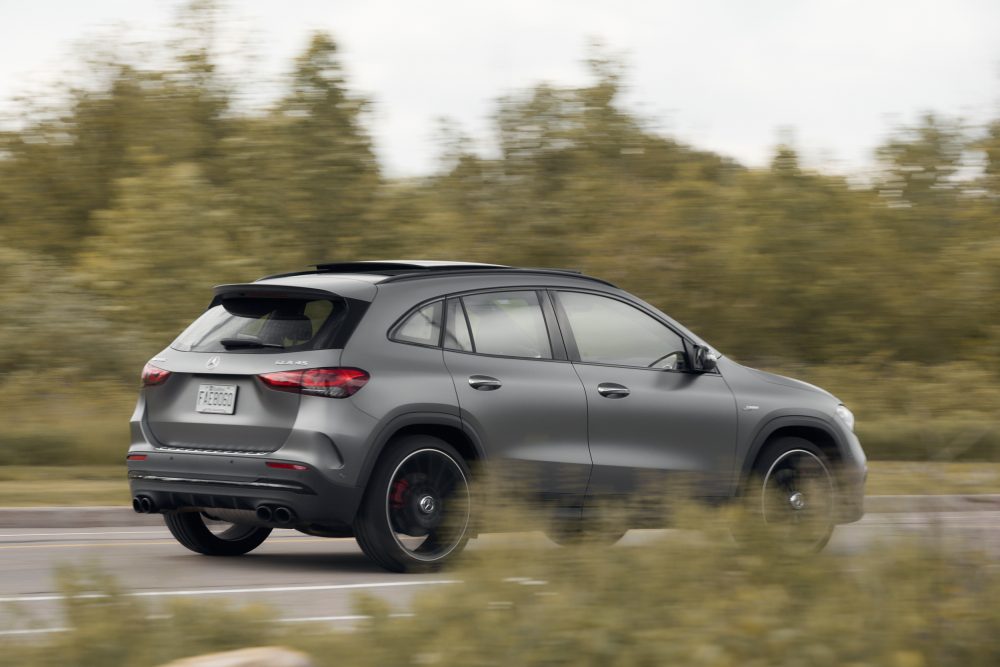 If you can afford the 2021 Mercedes-AMG GLA45, it’s definitely a hoot to drive and a peculiar performance-focused offering in a world the subcompact luxury crossover serves more for styling, practicality, comfort and all-weather capability. I highly doubt GLA45 owners will bring their crossover to the track. But if they do, they’ll undoubtedly enjoy humiliating sports cars for hours on end.