2021 Mercedes-AMG A35 Is The More Civilized Hot Hatchback 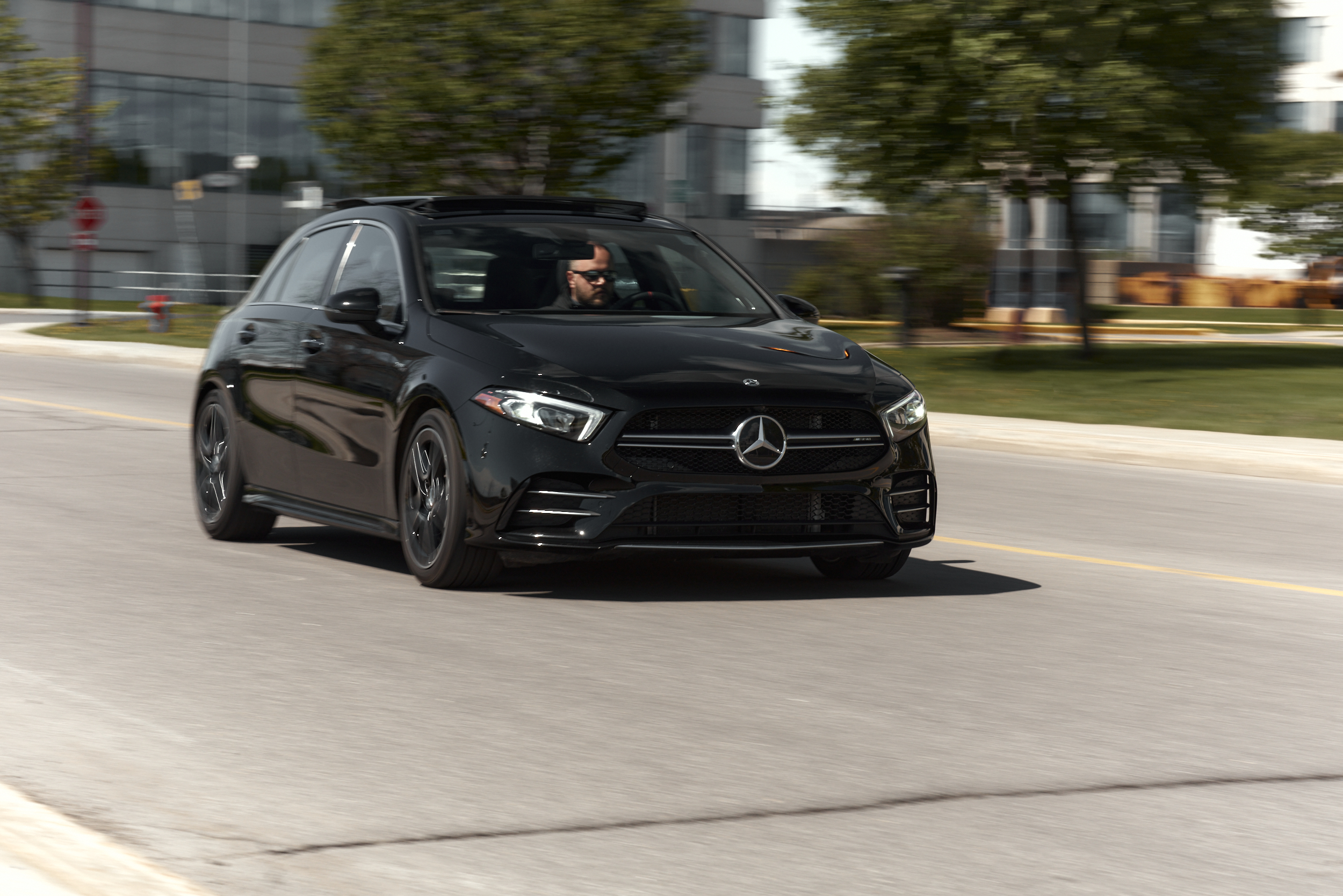 The 2021 Mercedes-AMG A35 is the hot hatchback for the boy (or girl) racer who has grown up and now wears a suit and tie during the majority of their week. It looks like your regular A-Class, but it packs enough of a punch to humiliate much quicker and flashier vehicles. In a world where a Civic Type R looks like something taken straight out of a Manga cartoon, this naughty little AMG is a welcoming touch. 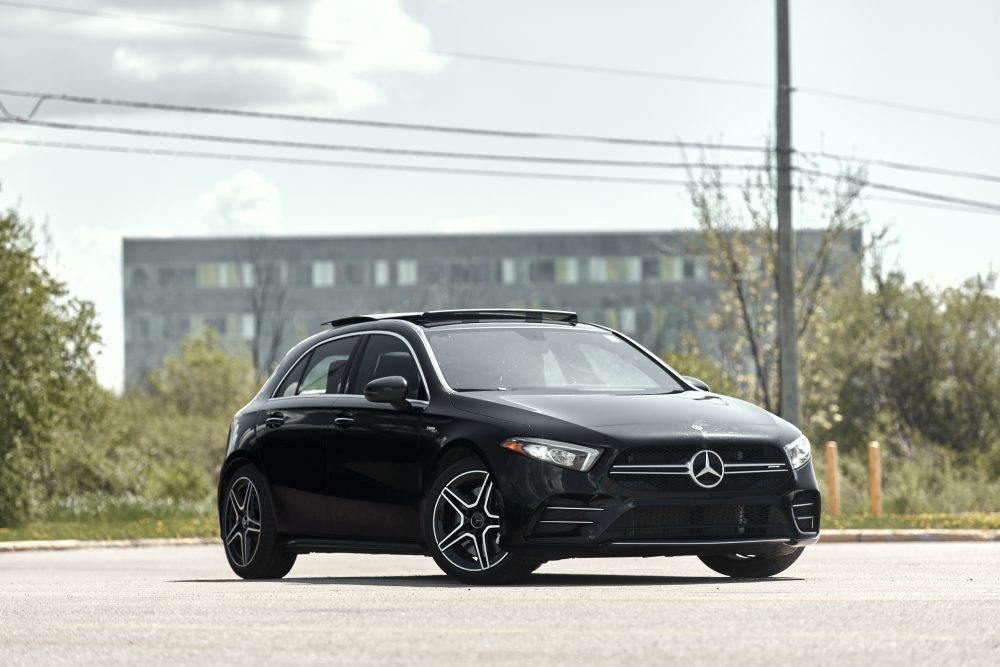 It also comes at a great time since the Volkswagen Golf R is currently on hiatus here in Canada until the next-generation model comes out, meaning there are currently no German-made performance hatchbacks on sale here. The only other alternatives we have left are that big-winged Honda or the equally rambunctious Hyundai Veloster N. 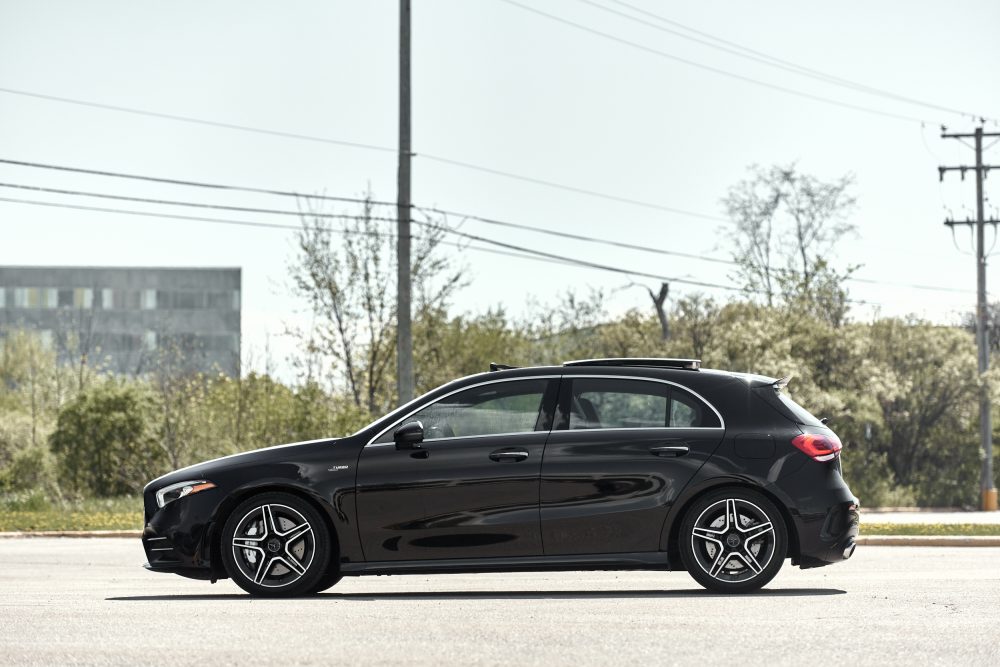 But comparing the 2021 Mercedes-AMG A35 to those cars is a bit unfair for Mercedes because while, yes, it is a performance compact car, it’s sits in the luxury class of pocket rockets. This means that’s it’s A, considerably more expensive than a Type R, a Golf R, a Veloster N or even a Subaru WRX STI, and B, was conceived to take on other premium offerings like the Audi S3, BMW M235i and even the Cadillac CT4-V. Although none of those cars sold here are offered as hatchbacks. Here’s another fun fact: the A-Class hatch is only available in Canada on this side of the pond. While our American friends are stuck with the sedan only, we get both. 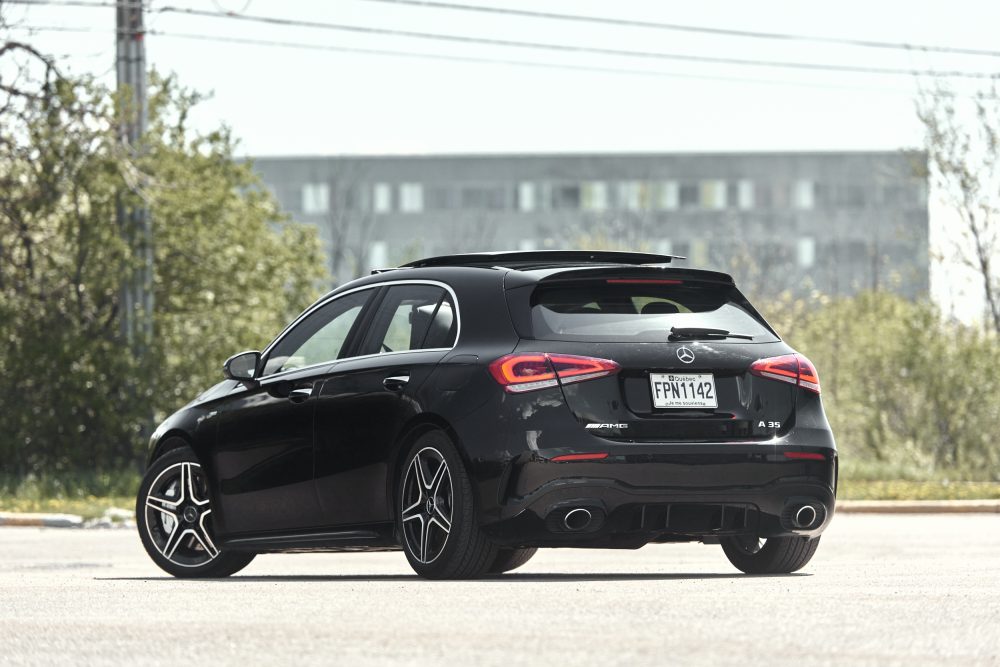 To achieve hot-hatchback status, the A35 was submitted to a considerable amount of chassis reinforcements, a retuning of its suspension components and a solid brake upgrade. Power comes from a heavily modified version of the 2.0-liter turbocharged four-cylinder unit that powers the A250, except it pumps out 302 horsepower and 295 lb-ft of torque. Mercedes-AMG will even sell you a more powerful version of this engine in the CLA45, with almost 400 horsepower on tap.

Mercedes’ 4MATIC all-wheel drive is of course standard, and so is launch control from the dual-clutch seven-speed automatic transmission. This allows the A35 to launch out of the hole and up to 100 km/h in just under 4.5 seconds. 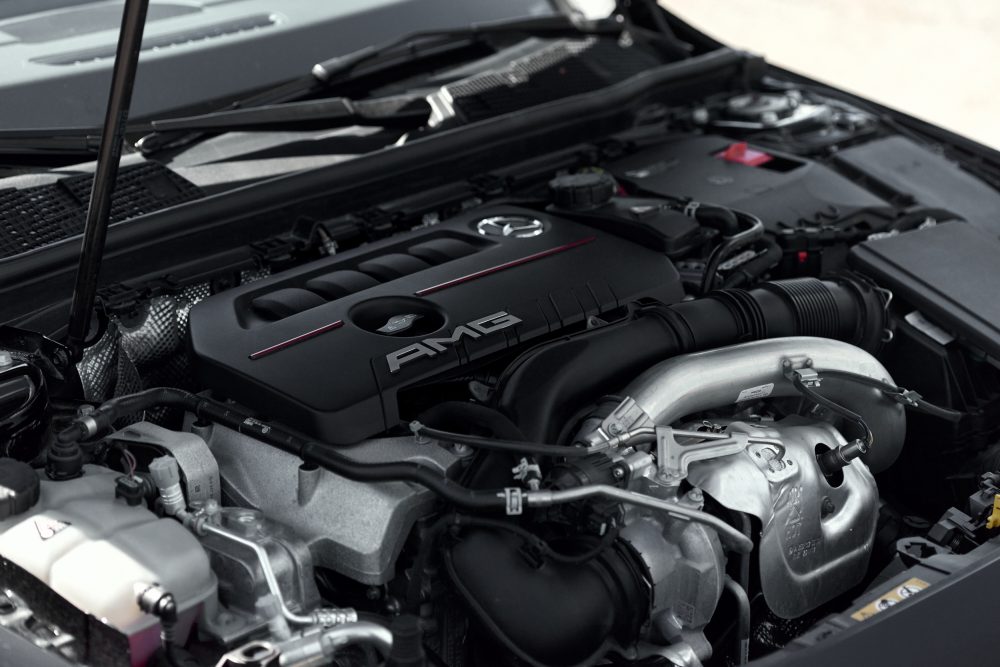 Pricing for a 2021 Mercedes-AMG A35 is where the car reminds you it’s a Mercedes. In other words, it’s not cheap. While the $50,015 entry price may seem decent when compared to a Civic Type R or an STI, Mercedes won’t let you get away with it without ticking off a few optional packages. And those packages aren’t cheap. 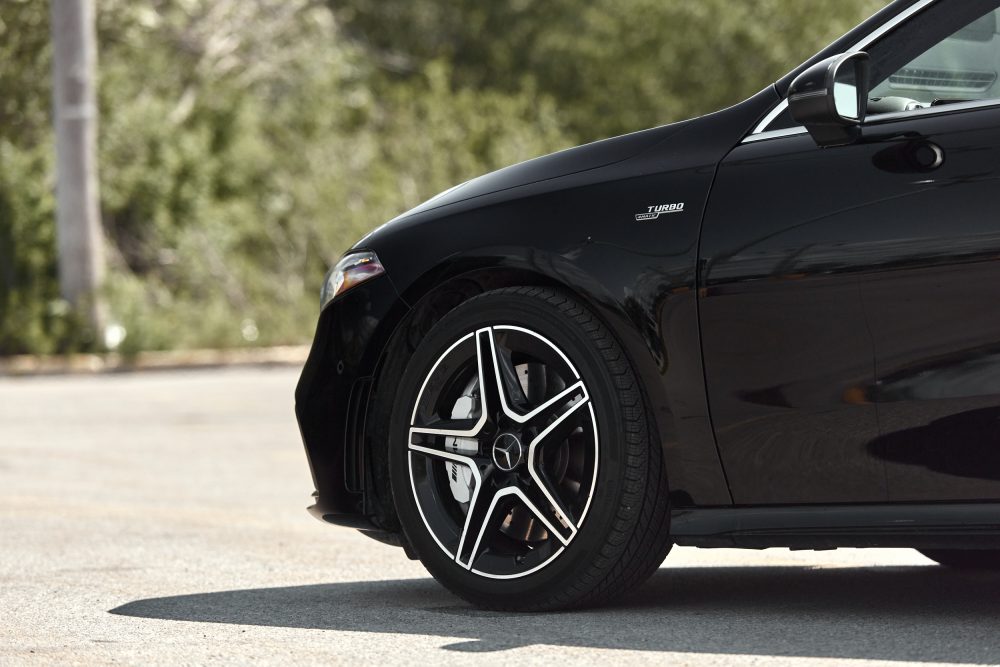 For instance, if you want Android Auto et Apple CarPlay connectivity – something that comes standard in a $14,000 Chevrolet Spark -, you need to add the $3,200 (wait what?) Premium package, which also grants you blind spot assist and a wireless phone charging tray. Again, these are things you can easily get in a $30,000 Toyota Corolla. The car I was driving was therefore knocking at the door of 56 grand.

Will Crackle And Pop 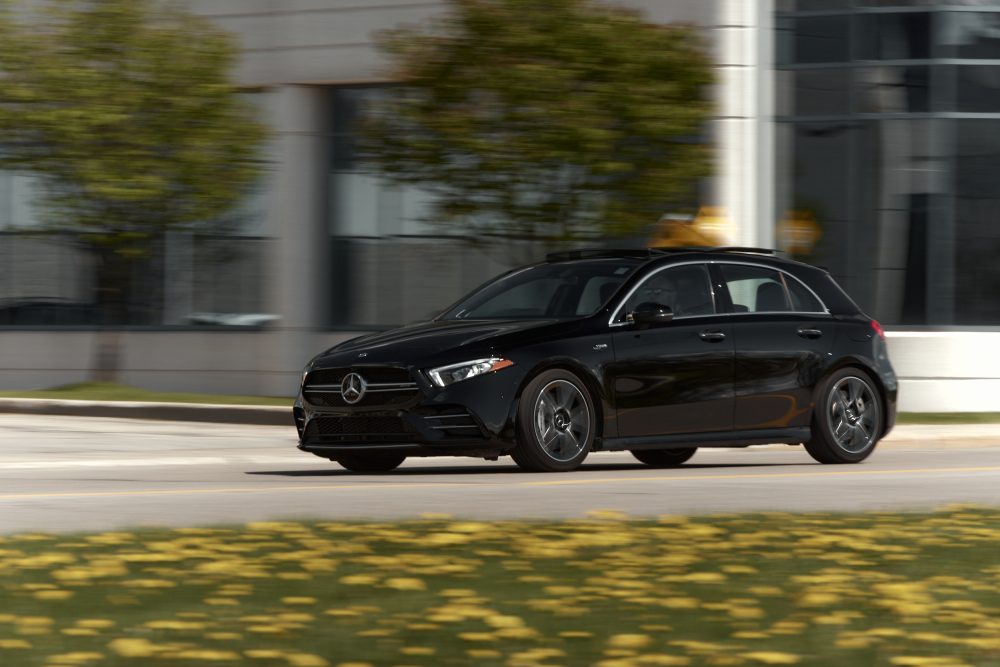 What’s interesting about the way the A35 delivers its performance is that it wakes up only when you really ask it to. When set to its default Comfort setting, it’s as quiet as a library, sounding even a little lame at times. Except for the subtle AMG logos here and there, there’s absolutely nothing about this thing that suggests it could embarrass a Ford Mustang GT at the dragstrip. 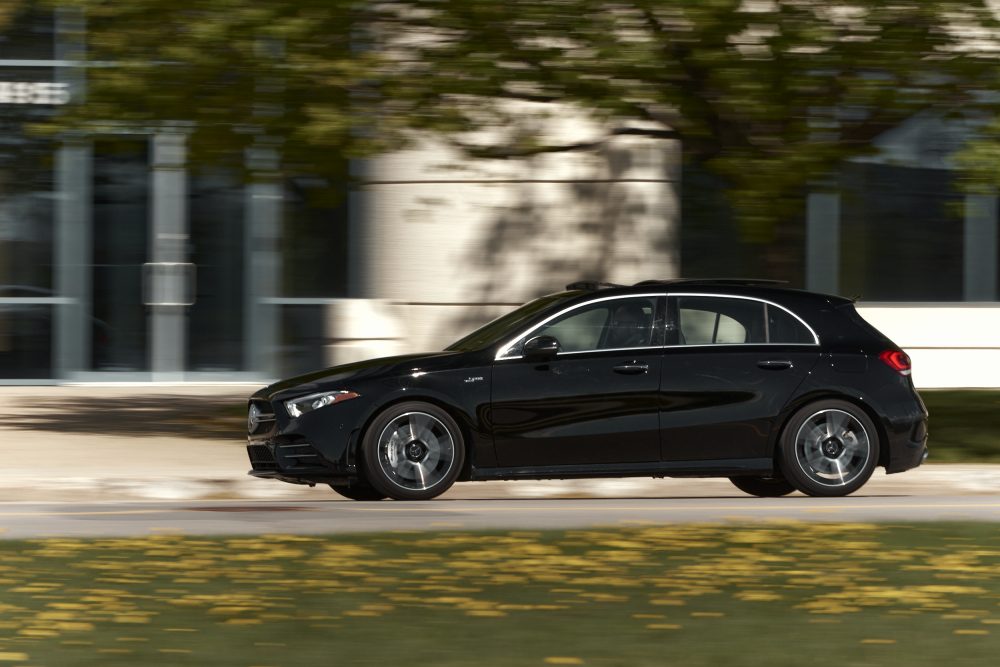 Set the car to Sport+, however, and it suddenly transforms into a firecrakin’ little rascal. Its exhaust gets louder, and crackles and pops during up and downshifts. The gearbox is more aggressive, and the entire car feels stiffer with a considerably hardened steering wheel. Launch control is activated by removing traction control, holding the brake pedal and stomping the accelerator pedal. And you do this, the A35 flies! 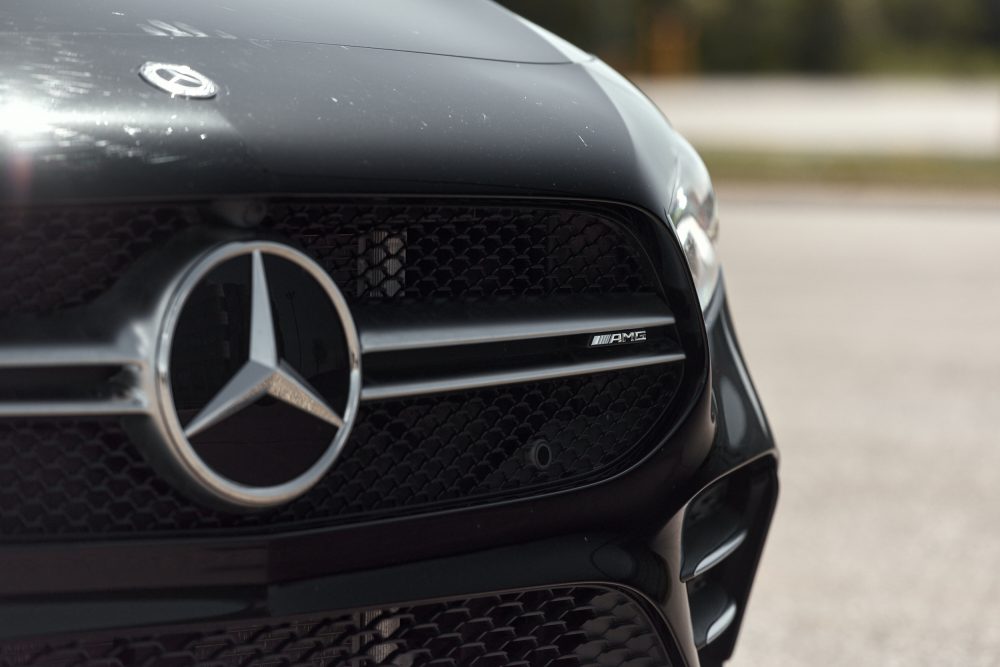 And that engine is one hell of a raucous, especially when it approaches redline. It loves to rev, but also screams bad boy melodies the entire way. When running full boil, the A35 sounds like a pissed off hyperactive child who was just stolen its lunch money. It’s a hoot to drive, the gearbox is lightning quick and the level of grip is rather astonishing in the corners. You wouldn’t expect this kind of performance from the way this car looks. 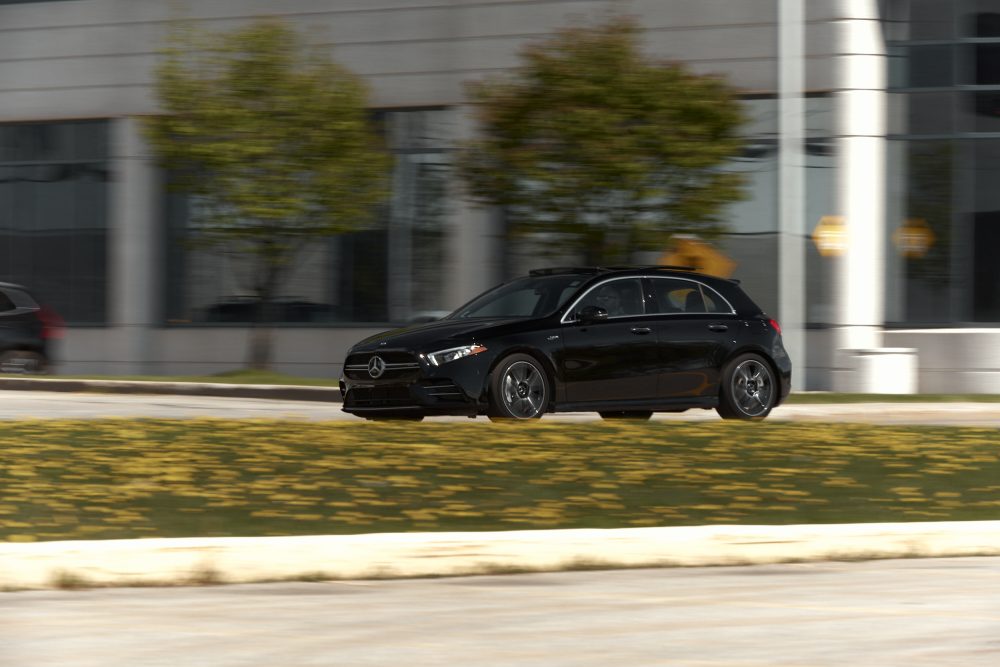 When you’re done slapping grins on your face, the A35 readjusts its tie and turns back into a sensible luxury hatchback, unassuming and never attracting too much attention. It’s a Q ship in its own right. 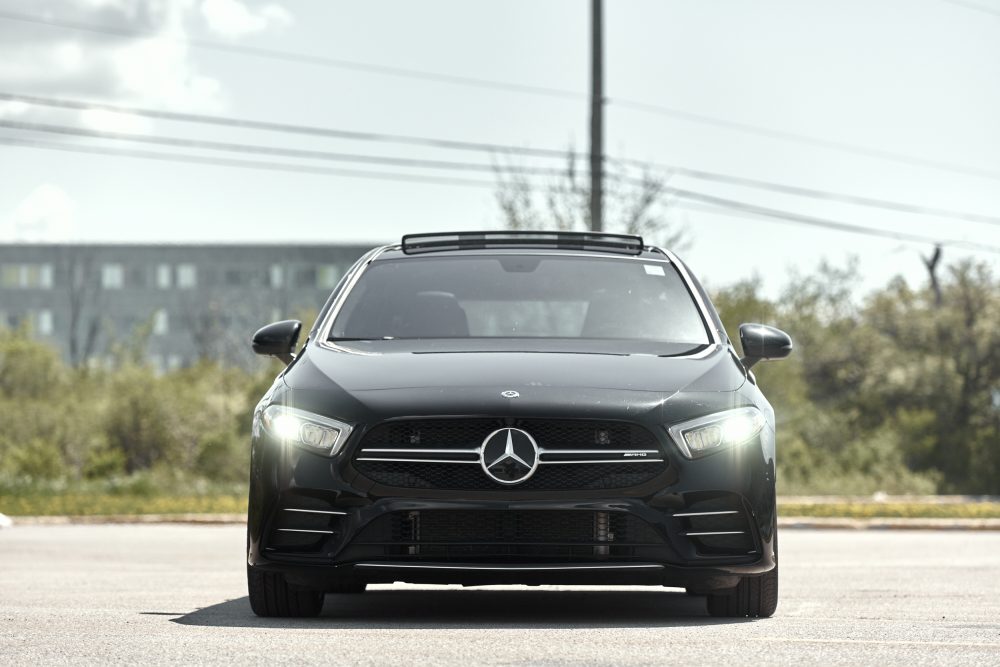 It unfortunately falls a bit short during casual daily driving. That suspension is stiff as hell – a typical German problem – but in the A35 it’s downright ridiculous. The car has difficulty absorbing any kind of crack, pothole or road imperfection, sending irritating jolts up your back. I was also a little worried about build quality as the entire cabin cracked and emitted cabin noises, especially from the trunk area. Speaking of the trunk : when removing the cardboard privacy cover when I was trying to squeeze my bike into it, one of the cover’s supports broke off. I once owned an old Honda Civic with more than 300,000 km on the odometer, and the cover never lost its pieces. 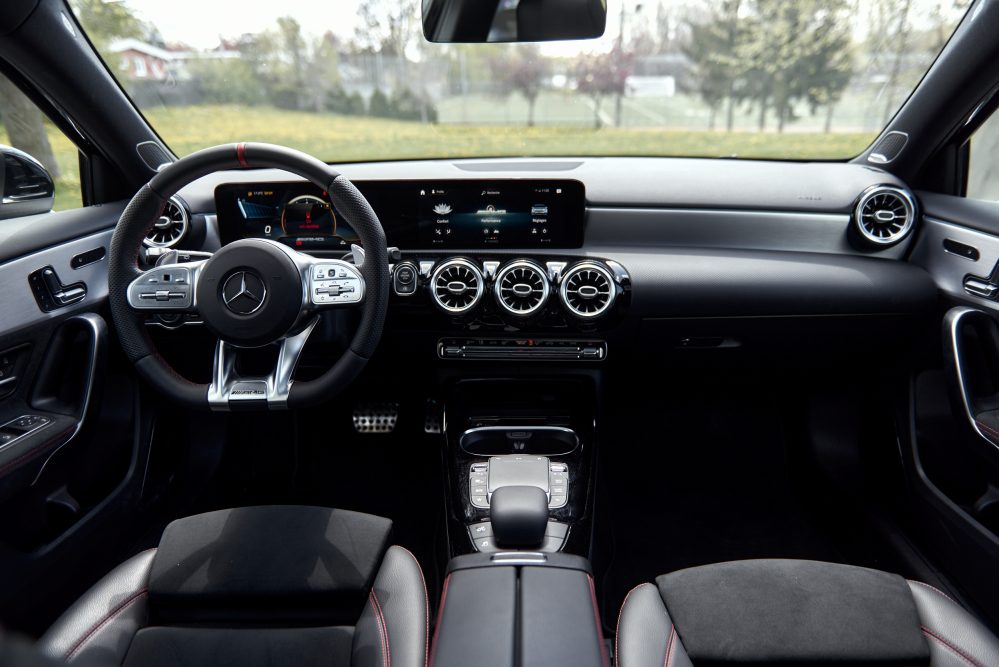 However, when the A35 isn’t cracking its dashboard and breaking your spine, it does present itself as a beautiful machine, especially inside, where the overall cabin presentation and seat comfort all look and feel upscale. The seats themselves not only look fantastic, they offer tremendous support during high-speed cornering, and the A-Class’s screen dominated dashboard – which was pioneered on this car – still feels fresh and modern today. 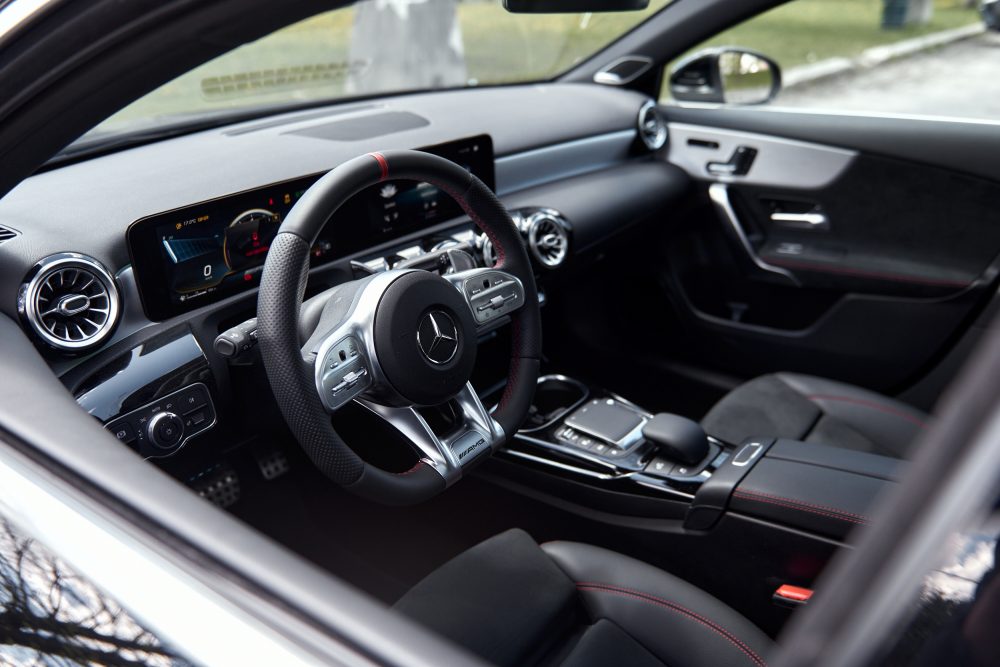 The large circular vents give this baby-AMG a hint of an S-Class vibe, while the brushed aluminum not only adds a sense of quality to everything, but spices up the cabin to make it feel expensive and exclusive. The small-diameter AMG steering wheel also looks and feels fantastic as you grab it, and I love how Mercedes allows you to change the gauge pod to your liking, not just when you toggle between drive modes. I had a large tachometer in the middle of the layout similar to an AMG GT R. 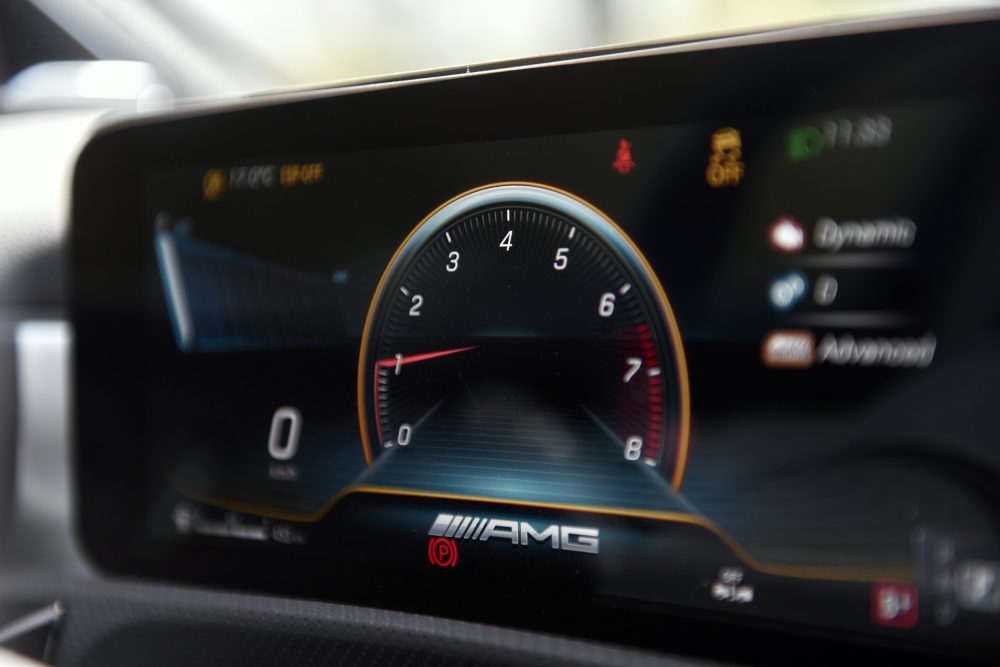 Unfortunately I can’t say I find the MBUX infotainment system intuitive. Sure, it’s crammed with neat technology, like the “Hey Mercedes” voice prompt that allows to activate a wide variety of functions using your voice. It’ll even order you a coffee. But the system itself gets easily thrown off if you’re driving with the windows down, or if passengers are speaking in the car. Operating the system through the trackpad is also a disaster. You’d be better off using the screen’s touch controls instead. Finally, rear seat room in an A35 is extremely limited, especially if the front passengers are tall. You’ll also get much more cargo space from a Civic Type R. 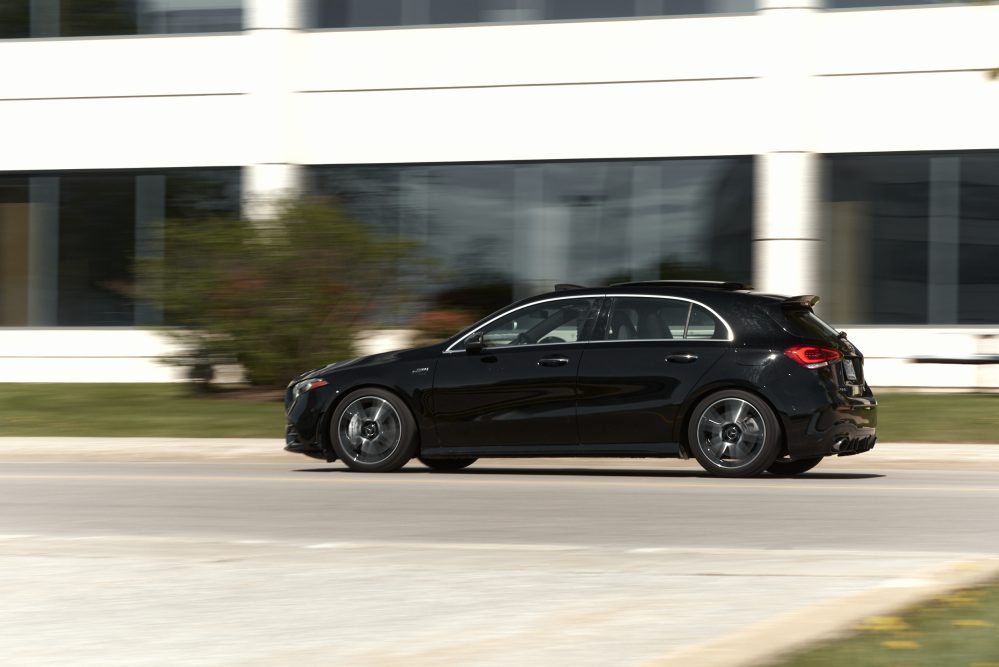 The 2021 Mercedes-AMG A35 is an imperfect hot hatchback, but it delivers on the performance and luxury promise the Mercedes badge is best known for. Quick as hell, loud when it needs to, but quite when it has too, and tremendously fun to drive, it’s the pocket rocket for people who prefer keeping things quite and sensible, while still engage in good old fashion hooning over the weekend. Yes, it’s expensive, and its options are ridiculously priced, but it’s hot hatchback only AMG could have created.