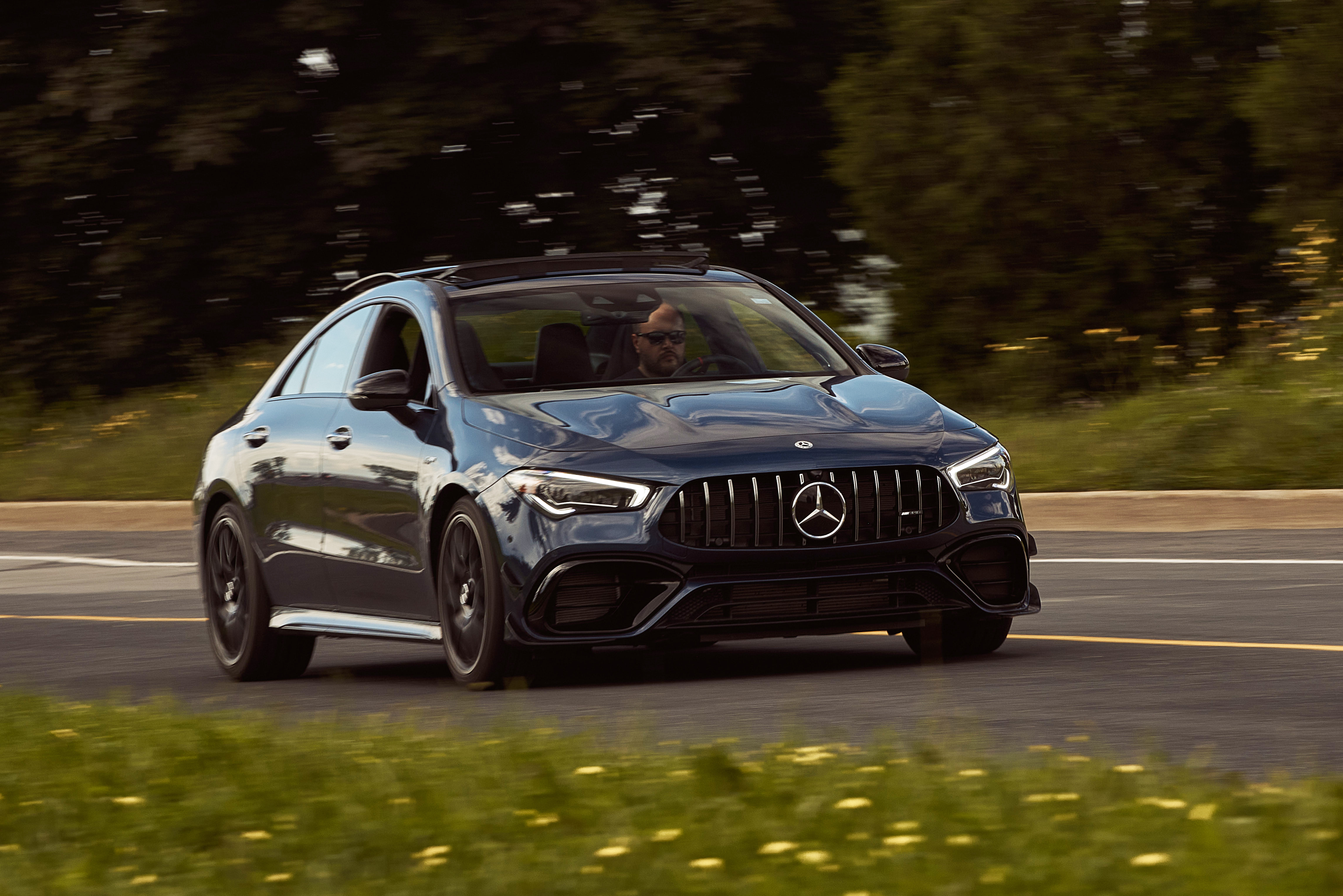 The 2020 Mercedes-AMG CLA 45 is powered by the most powerful production-series four-cylinder engine in the world. How’s that for total segment domination? Forget your Civic Type R,  Golf R or even Subaru WRX STI. The new king on the block is this, a sport compact car only Mercedes-AMG could have conceptualized.

Is It A Coupe Or A Sedan? 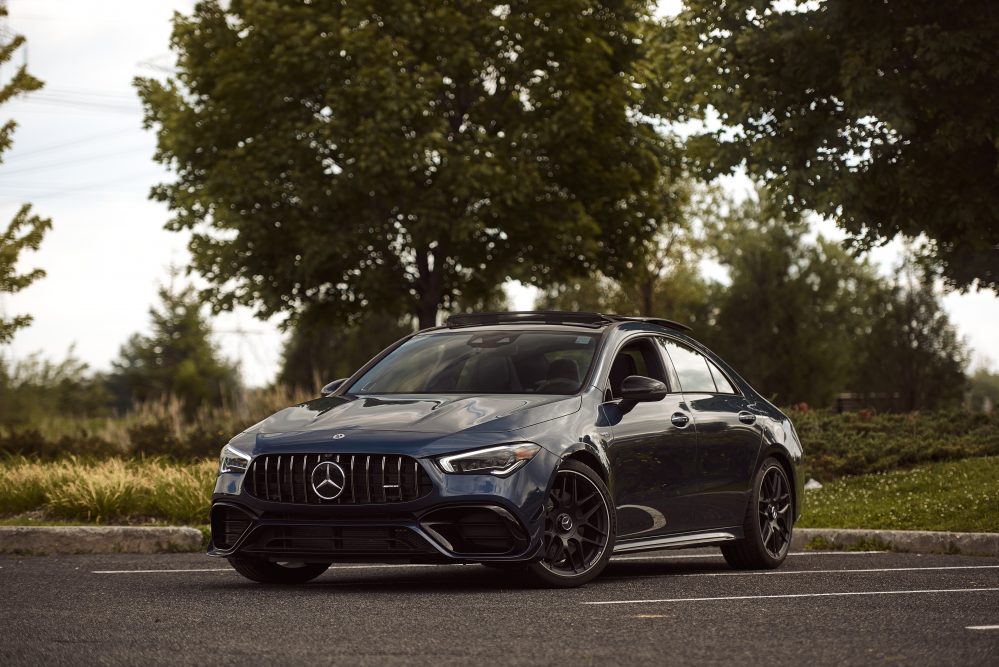 The 2020 Mercedes-AMG CLA 45 is based on the all-new CLA, the car that opened the door for “attainable” luxury at Mercedes-Benz. This is the second-generation car and it shares pretty much all of its mechanical components and platform with the overachieving A-Class. Except, Mercedes qualifies this as a coupe, although I do firmly believe this is a sedan. What you need to know is that the CLA splits the difference between the A and C-Class sedans, offering its buyer a bit more style at a somewhat affordable price point. 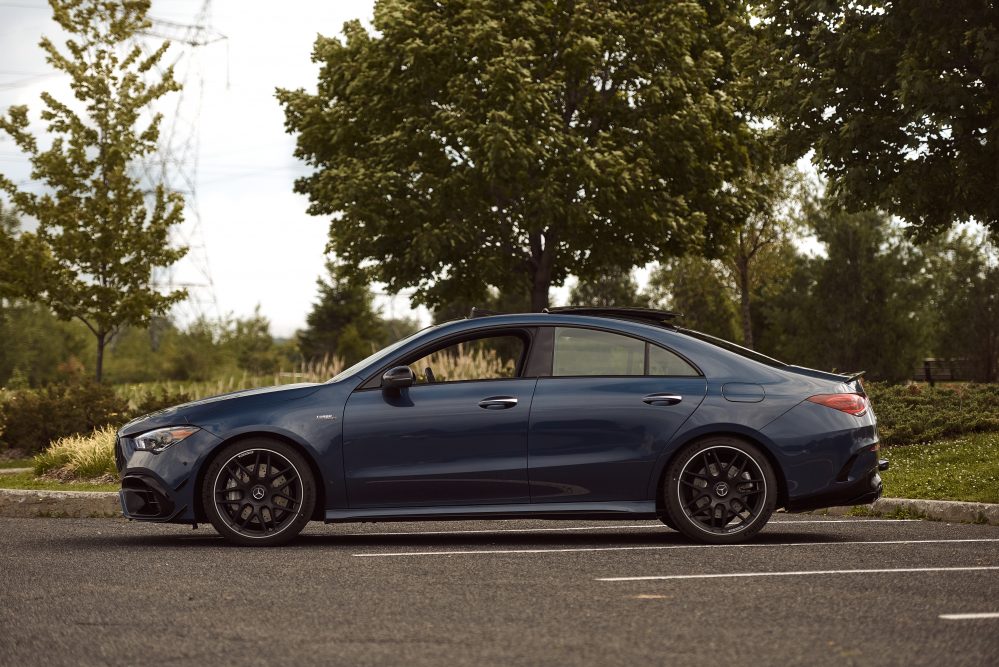 In AMG form, the CLA gets rid of its lukewarm drivetrain and replaces them with hardware you’d typically find in high-end supercars. And in many respects, considering the kind of performance this thing puts to the ground – which I’ll get back to in a bit – it feels like a supercar was bottled up in a compact car package. 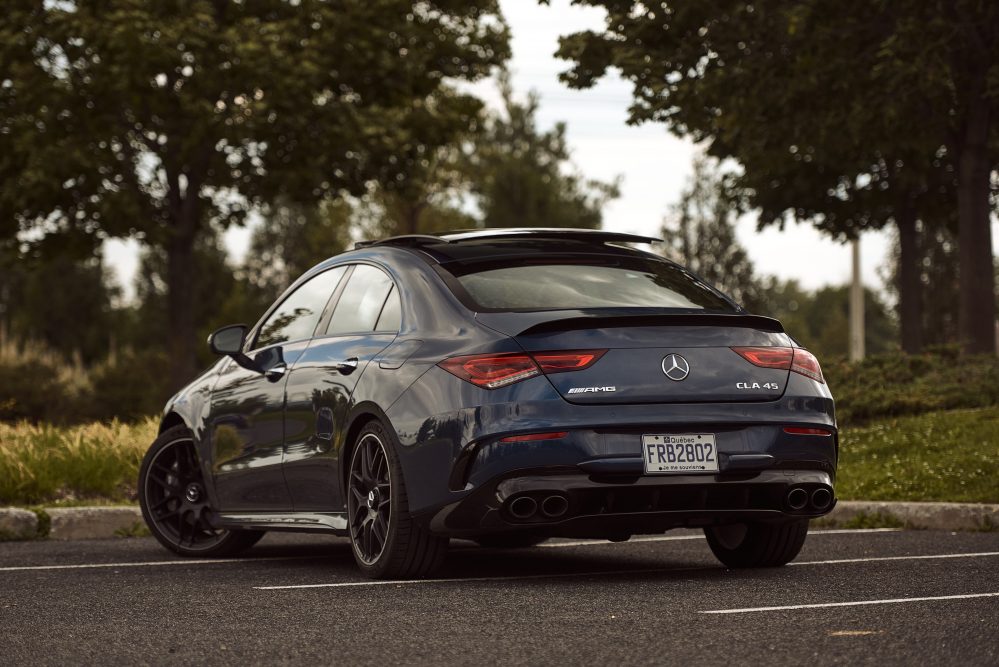 Let me begin by saying that I find this car absolutely gorgeous, especially now that it’s been fitted with the new panamericana grille, making it look like a baby AMG GT 4-door. The CLA’s rear end is now even more aggressively raked than before, yielding genuine coupe-like proportions. It’s definitely a cleaner, more mature design language than its predecessor. That car looked downright weird. 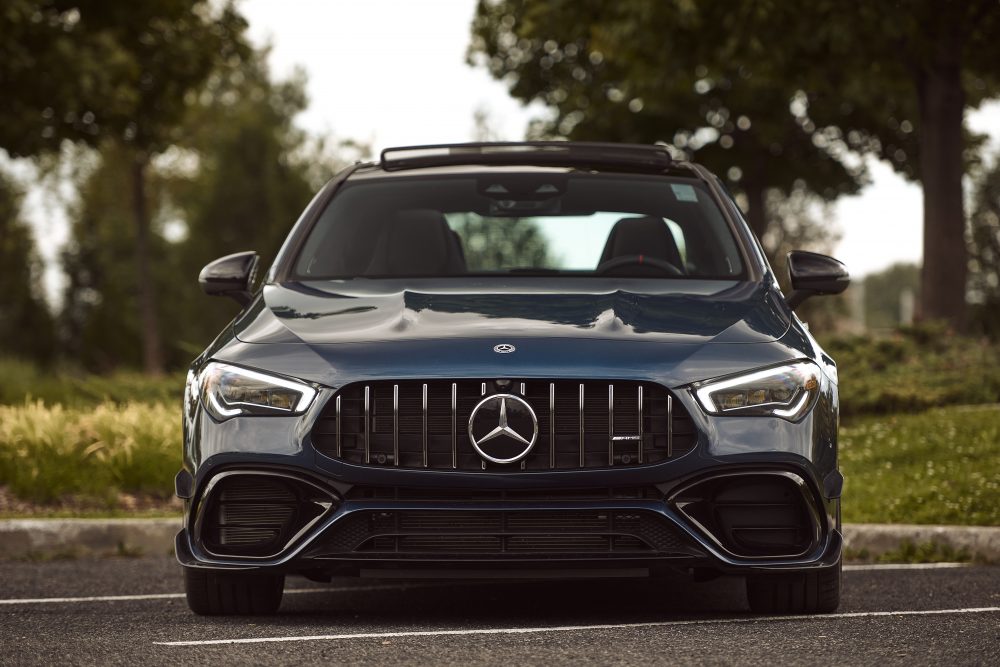 But it’s underneath that sleek body that the 2020 Mercedes-AMG CLA 45 really flexes its muscles. Power comes from a hand-built turbocharged, and highly modified, 2.0-liter inline four good for an astonishing 382 horsepower and 354 lb-ft of torque. In Europe, this engine pumps out an even more berserk 416 horsepower. 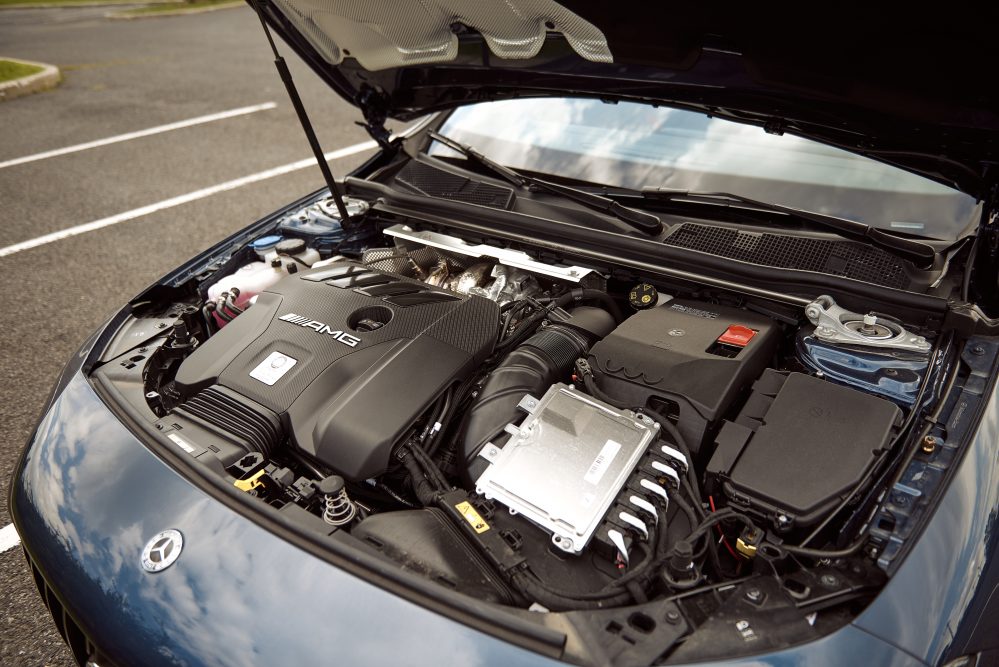 It’s all mated to an eight-speed dual-clutch automatic transmission and 4Matic all-wheel-drive. The CLA 45 will launch out of the hole and up to 100 km/h in just under four seconds, will hit the standing quarter mile in roughly 12 seconds and continue onto a registered top speed of 270 km/h.

Stick that in your sports exhaust, big-winged Civic Type R. 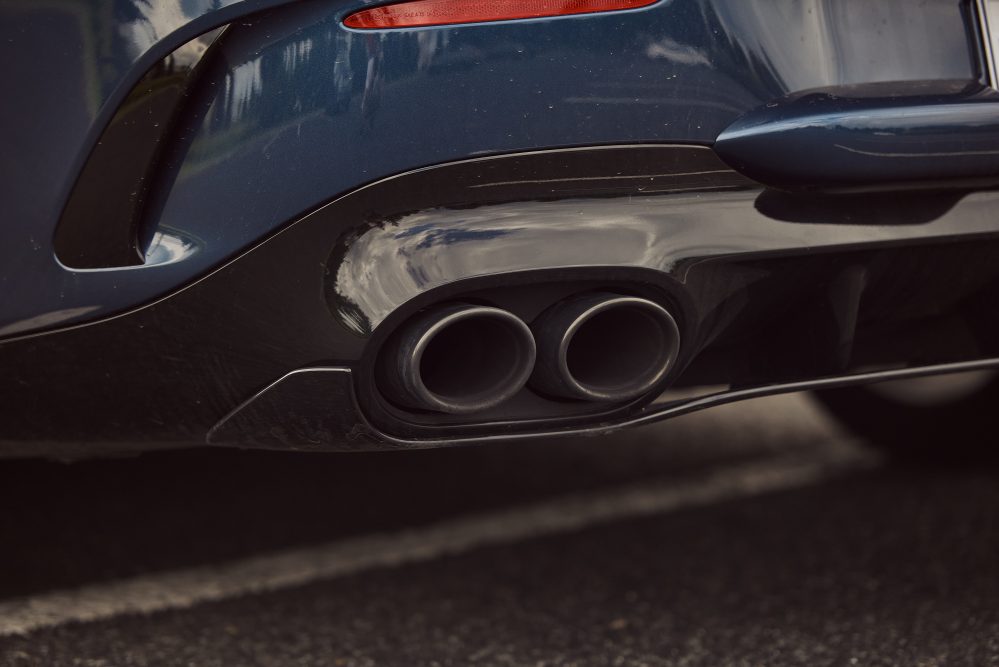 The CLA 45 even gets a “Drift Mode”, allowing the all-wheel-drive system to route more torque to its rear limited-slip differential for Youtube-worthy powerslides. Unfortunately, since I didn’t drive the car on a track, I preferred keeping things smart by not trying the gimmick on public roads. 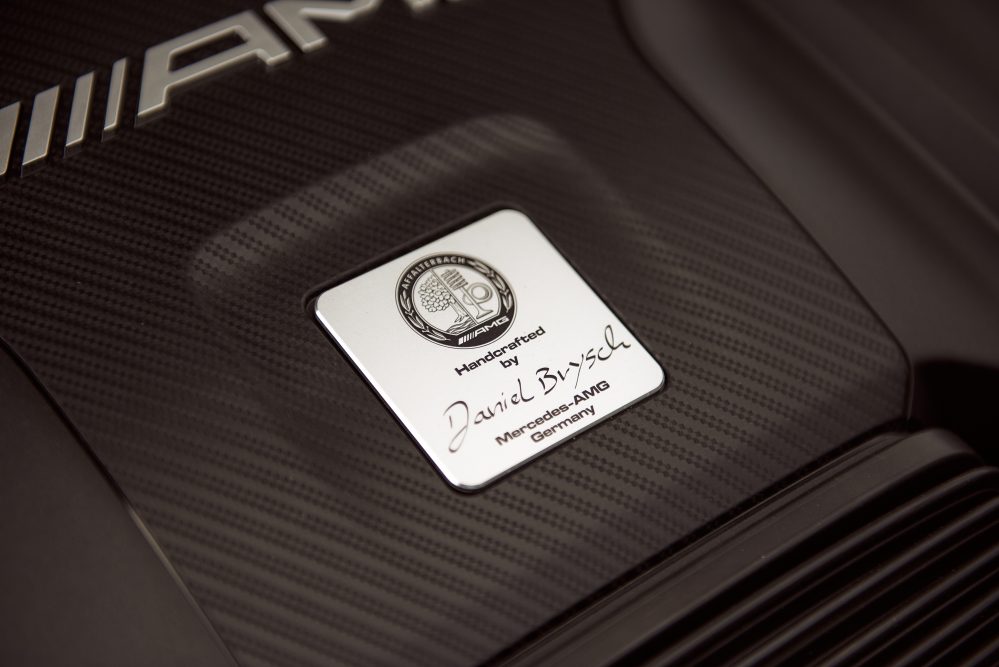 Pricing for the 2020 Mercedes-AMG CLA 45 is where the party sort of gets crashed. While, yes, its specifications walk all over the sport compact car segment, it’s not exactly an affordable pocket rocket, kicking off at a steep $59,200, and easily climbing past 70 grand. My tester stickered for $77,540. Gulp.

Hey, It’s A Mercedes Though 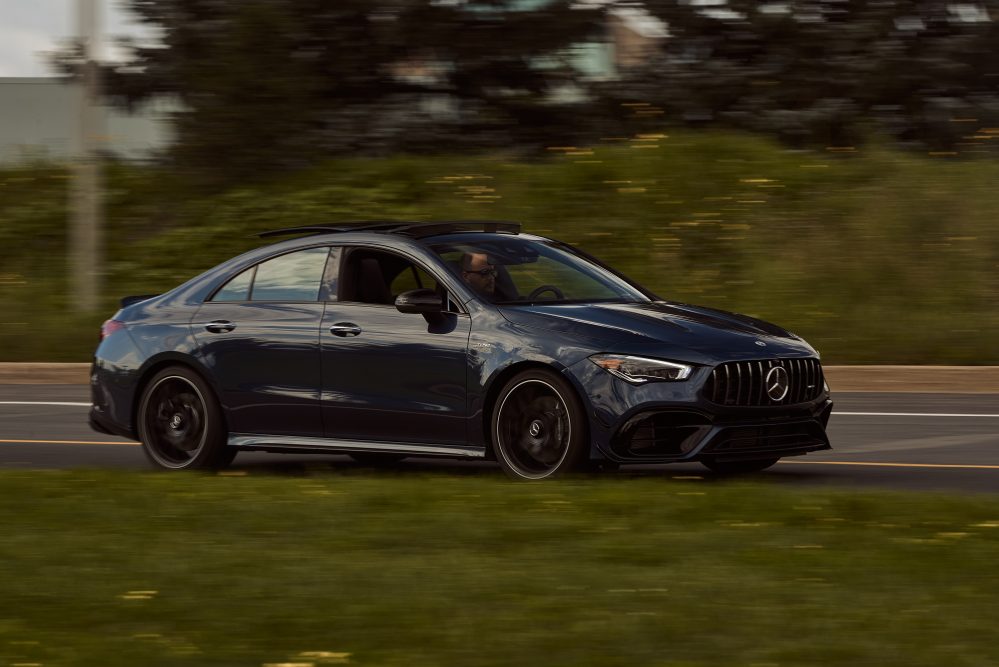 Fine, this is a sport compact car only the rich can afford, but it doesn’t detract from how absolutely bonkers this firecracker is. When launch control is activated, the 2020 Mercedes-AMG CLA 45 squats down, pops its quad exhaust as if its gargling on moonshine, and fires itself out of the hole as if a giant rubber band just catapulted it through the air.

There’s a tiny delay caused by the time the transmission and the all-wheel-drive system figure out the best possible way to obtain grip, but once they do, you’re gone.

The CLA 45 is a firecracker, spurting out loud bangs and pops as you downshift, while the overfed four-pot spurs madness as the revs climb, urgently delivering its power and torque with furious might, and never letting go until its time to shift. That, shifting, the CLA 45 does so with utmost precision. Shuffling between cogs will mostly depend on your ability to move your fingers fast enough. At times, it feels like the transmission has shifted before you’ve even pulled the paddle. 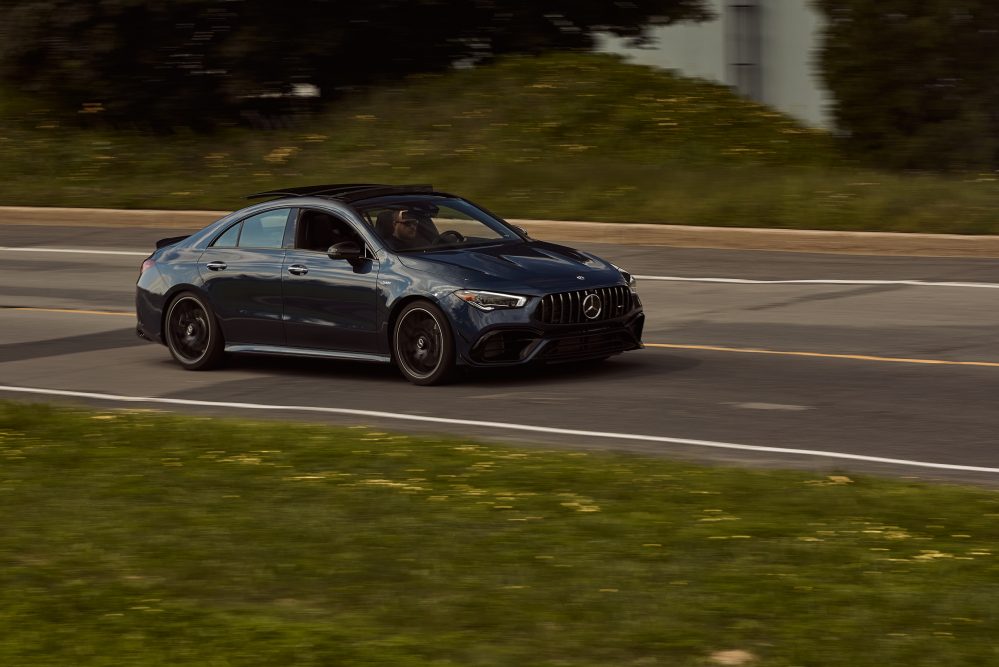 This rambunctious character carries over to the way the car handles. There’s very little compromise here, as the CLA 45 continuously reminds you of its intentions, as if Mercedes themselves were telling you “if you’re not happy, buddy, you should have bought one of our living rooms on wheels”. 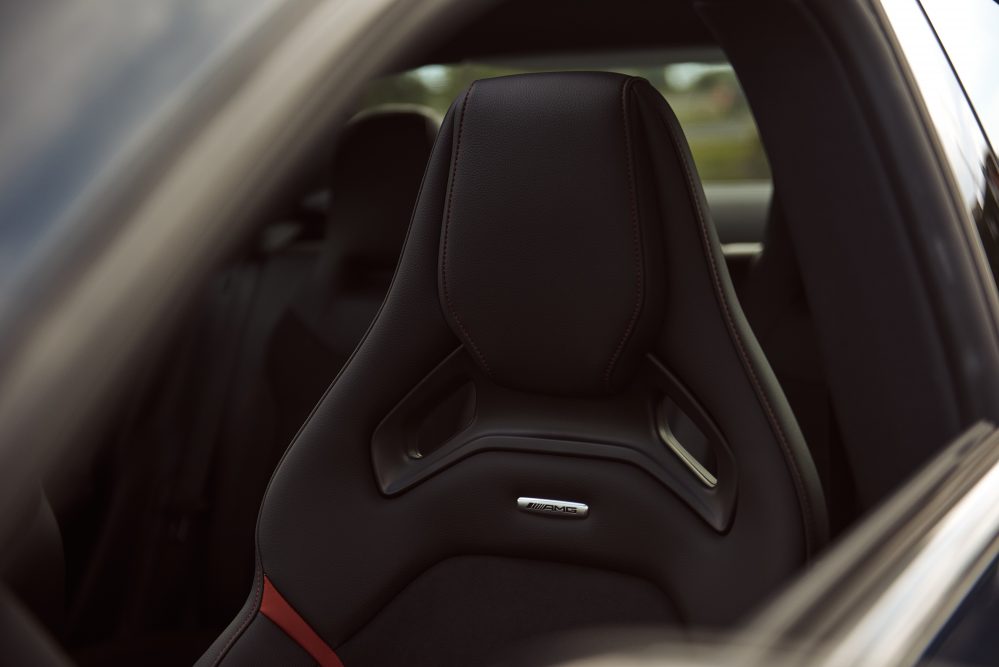 The CLA 45 is stiff, bouncy, loud and not docile at all, but also extremely precise, playful and immensely fun to drive. The AMG sport bucket seats provide fantastic lateral support during hard cornering, and the performance brakes could have been ripped out of the AMG GT supercar for all I care. They’re that good. I’ve done some hard drugs in my life, and the 2020 Mercedes-AMG CLA 45 was by far the most addictive. 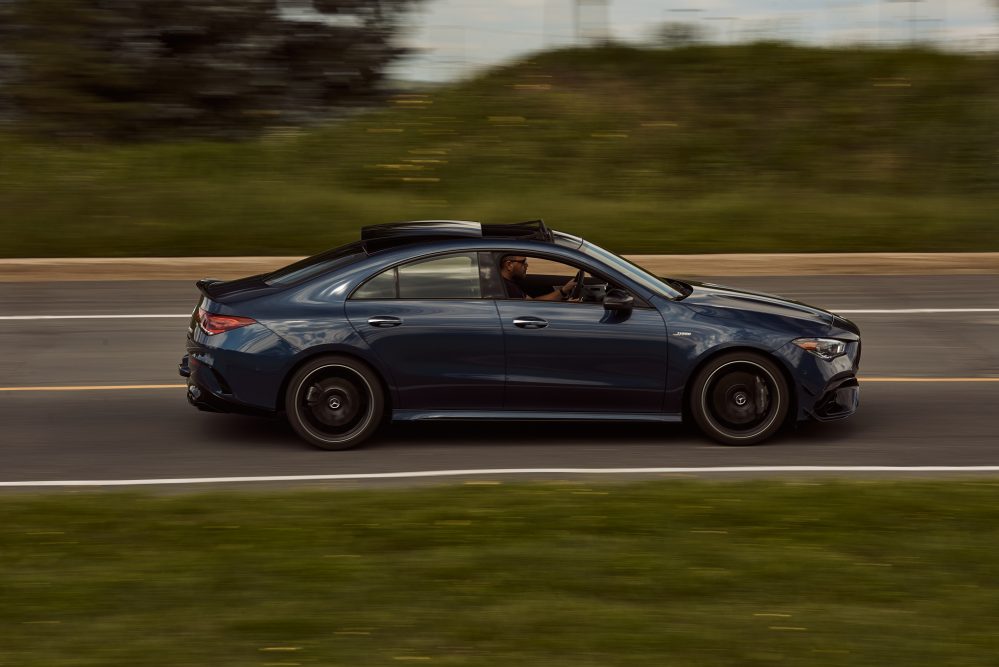 Inside, the CLA 45 boasts a very similar cabin as in, well, all modern Mercedes-Benz vehicles. There’s a lot of resemblance with the A-Class thanks to the large MBUX infotainment screen now taking up a large chunk of the dashboard, while the metallic air vents continue to look rich and expensive, allowing the CLA to distinguish itself as a true premium product. 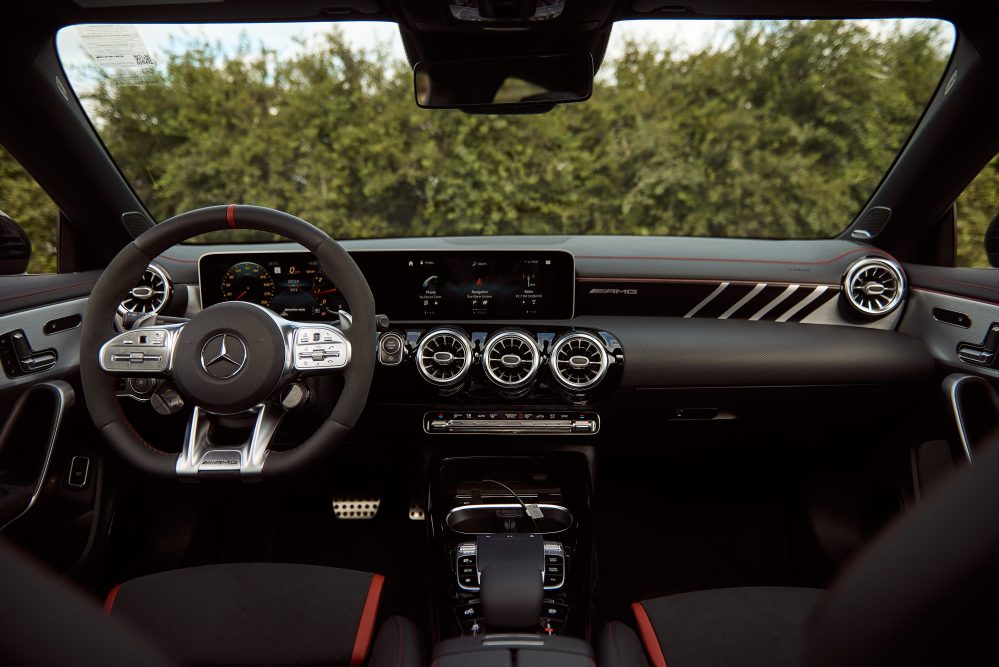 Being a Mercedes-Benz means material quality and fit and finish are above average. While the CLA ranks at the bottom of the Mercedes lineup ladder it never feels cheap per se. I also totally dig the subtle AMG design cues, as well as the new flat-bottomed alcantara-wrapped steering wheel with the new rotary drive modes. 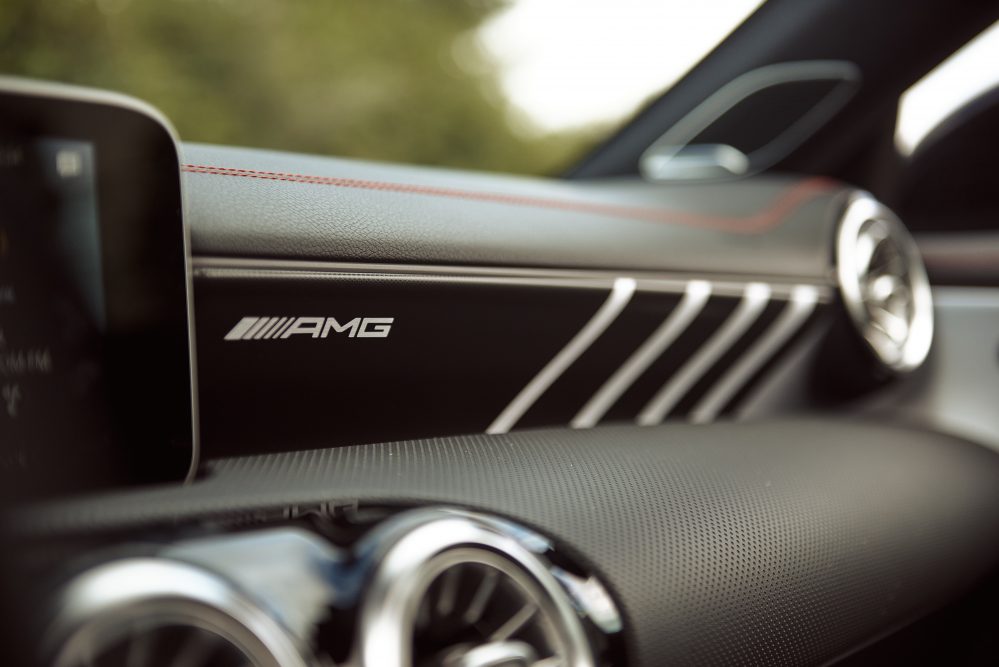 Unfortunately, the MBUX infotainment system remains a love it or hate it affair. It’s the annoying track pad that makes things complicated and not so intuitive. Granted, this is a voice-intensive system, and the voice commands do work well, until they don’t. 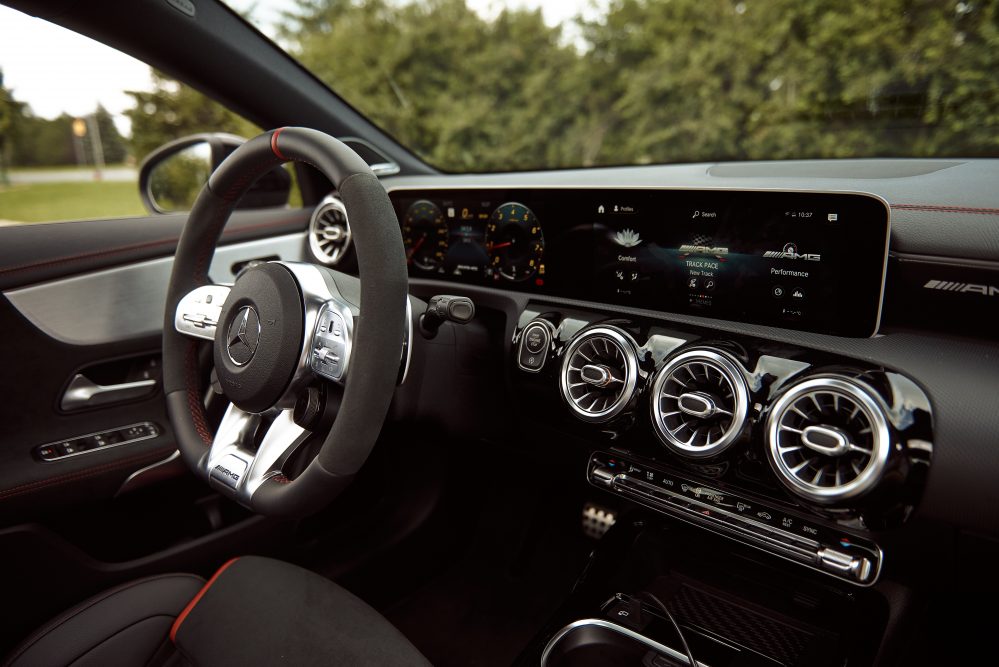 If you happen to be driving with a window down or have a passenger speak at the same time you’re ordering a command. the software gets confused and no longer understands what you’re telling it. Finally, rear passenger room is on the cramped side in a CLA, and so is cargo space. Perhaps that’s a small price to pay for those killer looks. 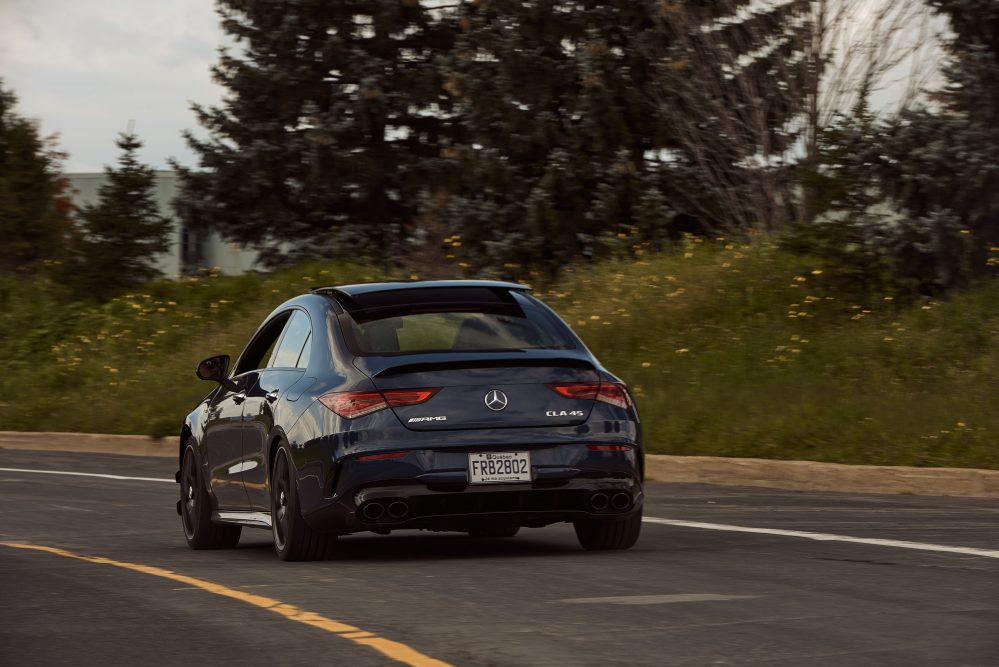 The 2020 Mercedes-AMG CLA 45 is a bit more than a hotted up compact luxury sedan. It’s the car that just redefined the sport compact car game, the one all other pocket rockets now need to measure up to. If the next-generation Golf R and Civic Type R pump out close to 400 horsepower, it’ll be thanks to this little rascal. Then again, did you expect anything less from Mercedes-AMG?