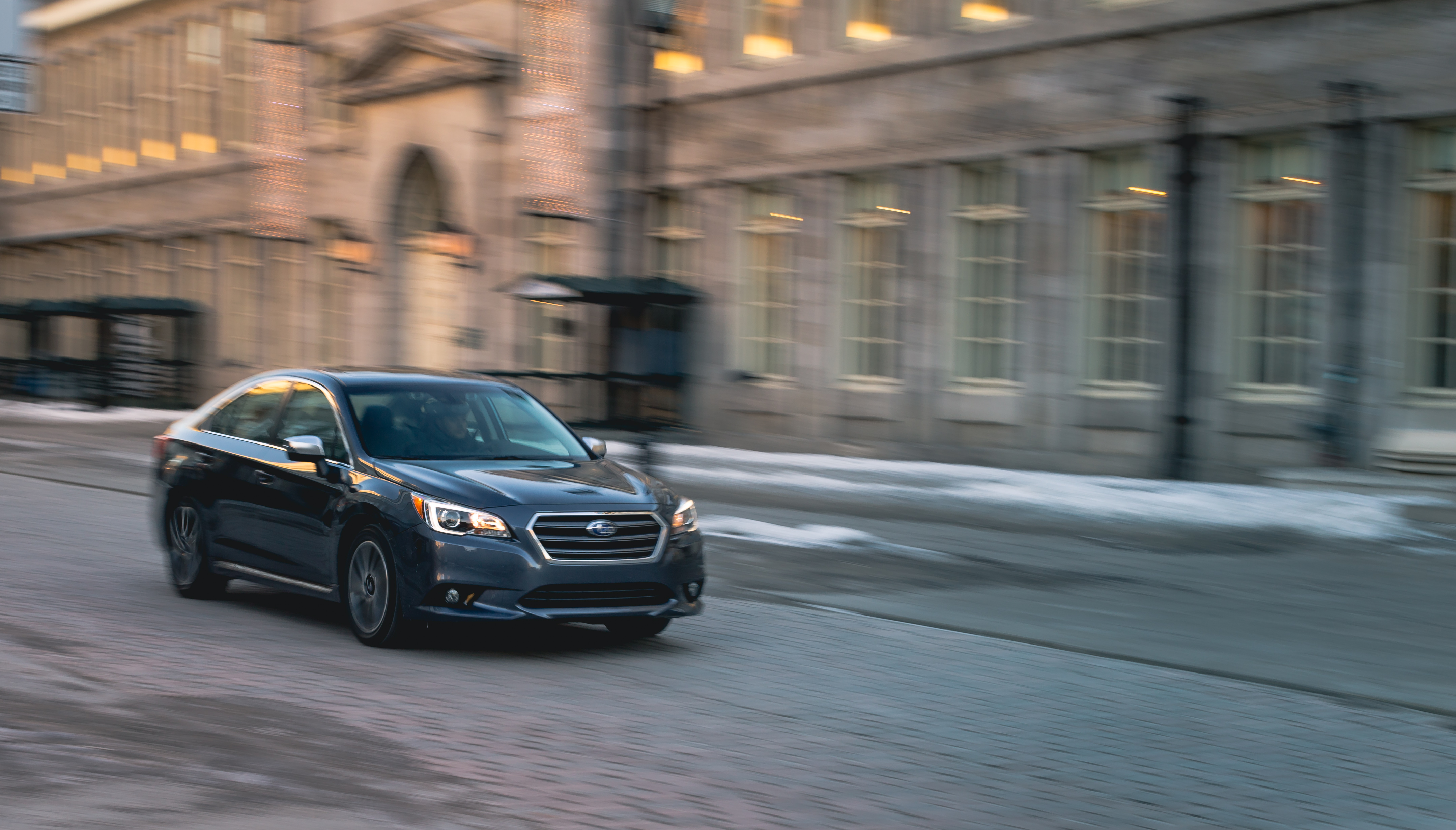 It’s easy to mistaken the Subaru Legacy for just some other midsize sedan. I mean, it kind of flies under the radar, especially when painted in Carbide Grey Metallic like the one you see here. Many will argue that with the Honda Accord and Toyota Camry lying around, lest not forget solid contenders such as the Chevrolet Malibu, Mazda 6 and Ford Fusion, any attempt at developing a midsize sedan nowadays would be considered a useless investment for any carmaker.

No it’s not. Because the one thing this crossover-infested industry needs at the moment is more cars.

The thing is, the Legacy isn’t a Camry or an Accord. It’s a Subaru. This means that underneath its mainstream body lies a rather athletic and poised rally-derived AWD machine. When Subaru Canada informed me at the last minute that the manual Crosstrek I had reserved was replaced by this, I was disappointed, thinking I’d end up reviewing another CVT-equipped snoozemobile. Turns out I had no reason to worry.

This One Has Symmetrical All-Wheel Drive 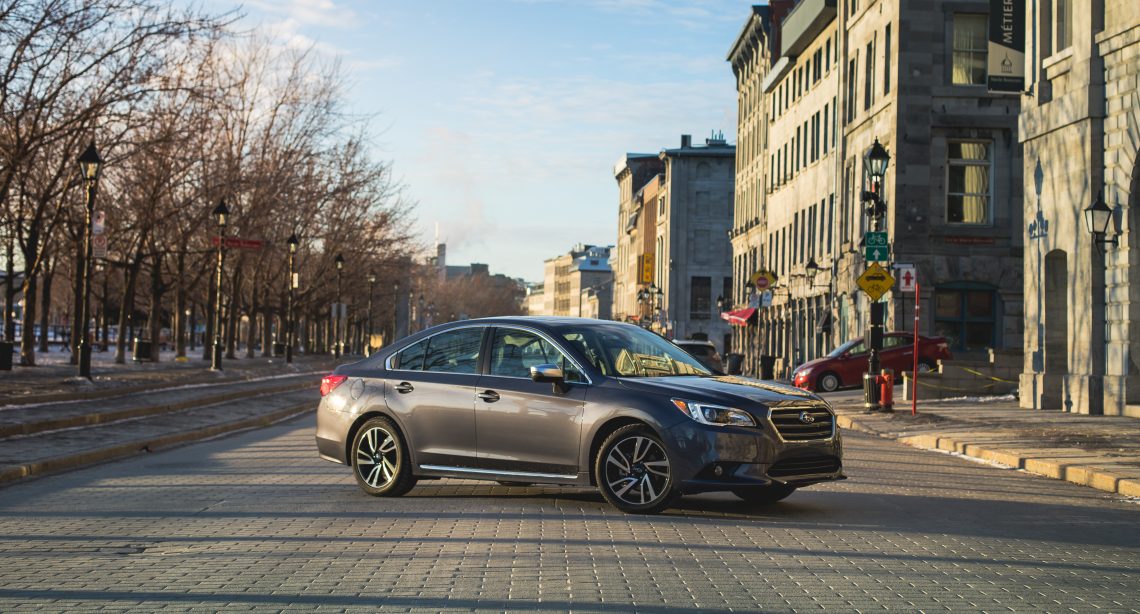 It’s important to take the time to underline Subaru’s advantage over its competitors with its all-wheel drive system. You see, no matter how much technology the other brands throw at their cars to make them handle better in shady climate situations (Acura’s SH-AWD is very impressive), none of them deliver symmetrical all-wheel drive as standard.

So, what exactly are we talking about here?

It all basically comes down to that Boxer engine. As you probably already know, Subaru is the only carmaker to fit all of its cars with a horizontally opposed motor (Porsche puts Boxer engines in the 911 and 718 only). 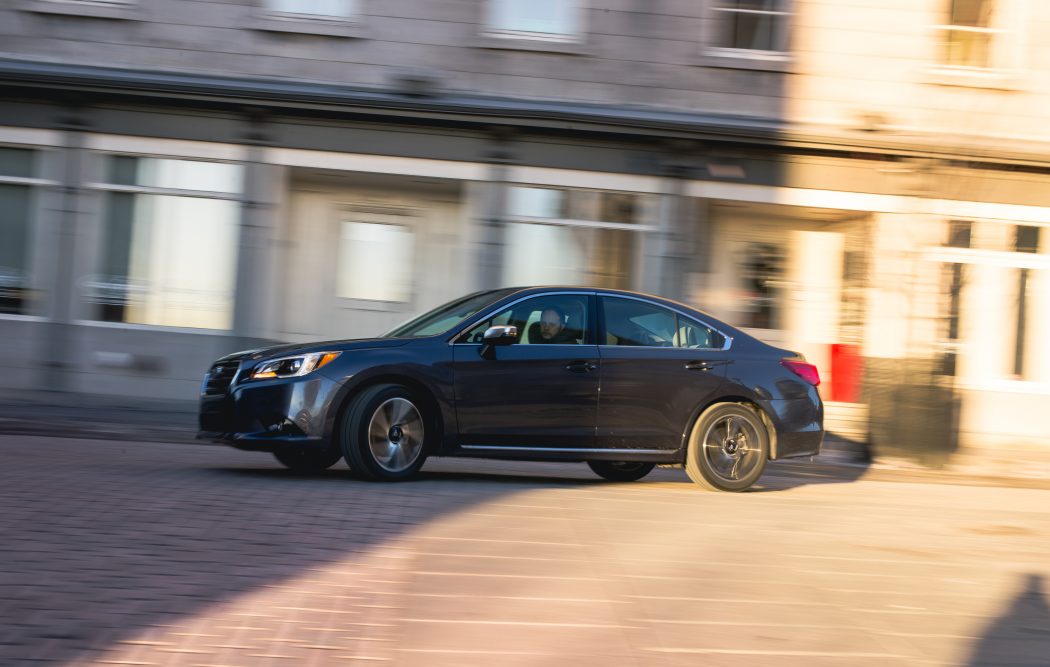 Boxer engines have several unique benefits and, unfortunately, some faults as well. One of which is the simple fact that due the its configuration, the engine is constantly fighting against the forces of gravity. This typically leads to piston rings that use up prematurely, creating significant losses in power, and, you guessed it: heavy oil consumption (this can be prevented through proper maintenance). Sorry Subaru, but I have to talk about the elephant in the room. Several Suby owners of late have unfortunately been the victims of serious reliability issues due to a known manufacturer defect related to problematic piston rings on the 2.0L and 2.5L, non-turbo units. Essentially, what this means, is that these owners ended with a brand new Subaru that drank more of the brown stuff than a 1950’s oil furnace.

In my direct environment, I count three people who have had their Subaru engines replaced under warranty. Yeah, not cool. To Subaru’s credit however, all three of my friends have had impeccable service from their respected dealerships and will continue buying Subarus in the future. Reliability, it seems, is something Subaru still needs to work on. 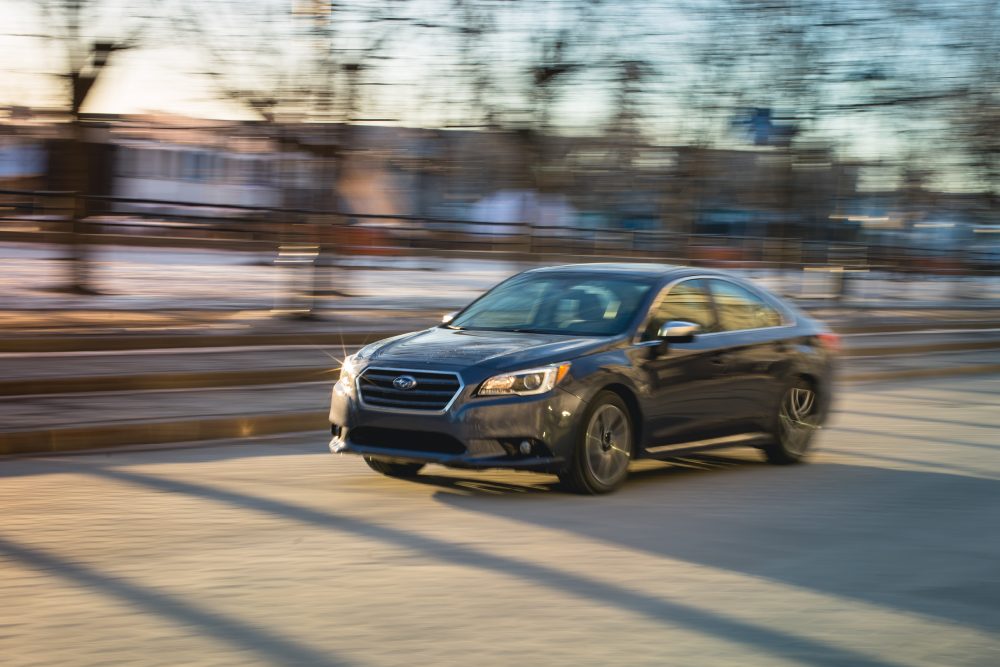 But! There’s a big trade-off for all of this. Subaru’s boxer engine is the reason their all-wheel drive system is so unique, and why they’re leapfrogging the entire car industry with it, even if it’s essentially been unchanged for the last decade. Since a Boxer sits much lower in the car than a conventional engine, the car’s center of gravity is therefore lower, which in turn translates into a car that’s better planted to the ground, improving its overall handling, reflexes and general safety. Also, if you look at the way a Subaru’s drivetrain is configured (look it up online, Subaru brags about this everywhere), you’ll notice that the car’s driveshaft, differentials and half axles are perfectly symmetrical with the longitudinally-mounted engine, making for one of the best weight distributions in the business.

So no, the Legacy you see here, well it’s no ordinary midsize sedan. It has more in common with a Porsche than a Camry. 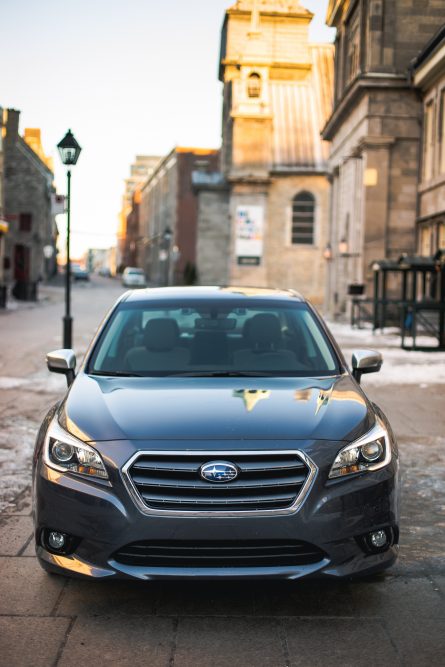 I think it’s fair to say that the 2017 Subaru Legacy’s styling is understated at best. It’s almost as if Subaru is doing on purpose to not attract too much attention with this thing. In all honesty though, the more time I spent with it, the more I appreciated its subtle, yet elegant demeanor. I like the idea of a Q-ship, or a sleeper if you will; a car that attracts zero attention until someone sees you giving it the mickey – or in Subaru parlé, a big fat drift in the snow.

Power in the Legacy comes from the now familiar 2.5L. In this application it’s good for 175 hp and 174 lb-ft of torque, classic numbers for that engine. A 3.6L flat-six is also available. It’s the same engine I tested in the Outback I reviewed for Jalopnik and it’s good for a more substantial 256 hp and 247 lb-ft. My tester was fitted with Subaru’s excellent continuously variable automatic, but I’m happy to announce that a manual Legacy is available for Canada (yes!) on the entry level and Touring trim levels. Ironically the Sport, which is the model you see here, can only be had with the automatic.

I guess Subaru doesn’t have the same definition of Sport as you and I. 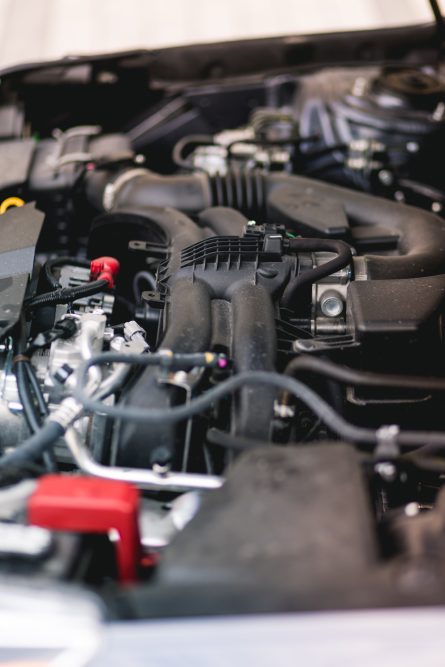 Driving the Legacy is a revelation, but only when you start driving it like a rally driver. In the everyday world it fulfills its duty of being a sedated, comfortable and easy to operate people hauler. The CVT is smooth, and thanks to Subaru’s simulated step-gear system, it does a great job of keeping the fantastic Boxer engine’s revs in the meat of the powerband. If you can though, opt for the manual, since in four cylinder trim the Legacy does feel a tad underpowered. A stick would definitely extract the most out of the available ponies. 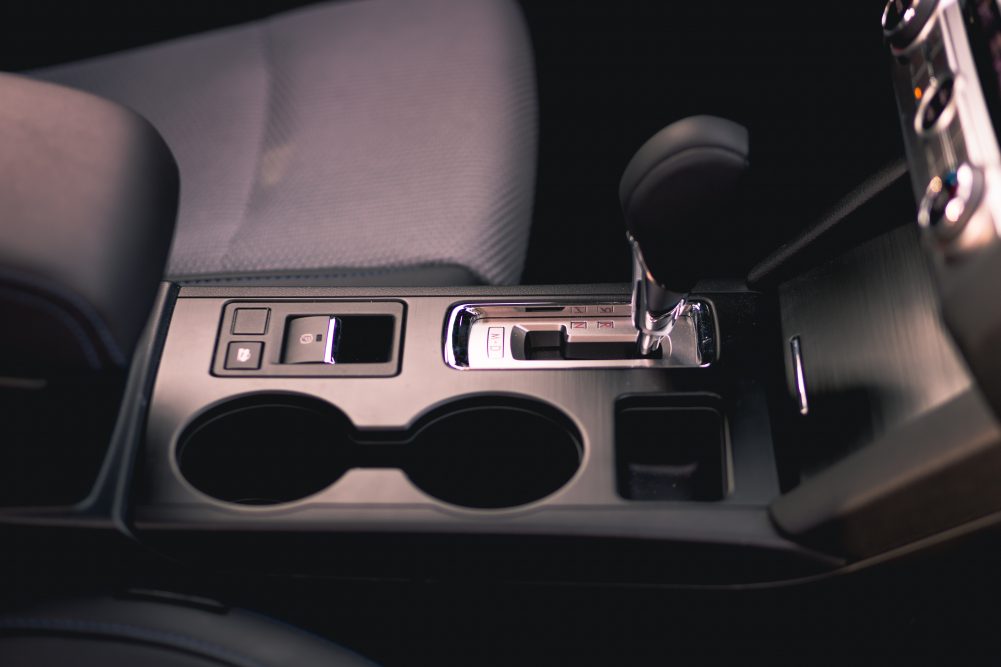 What impressed me the most about the Legacy’s chassis calibration is its double-natured personality. First impressions is a steering wheel that feels more vague than in a Honda Accord and a suspension setup that leans more towards comfort instead of performance. So in the bends, the Legacy does exhibit more roll than an Accord or a Mazda 6. You just don’t sense that it wants to play all the time like in the other two. Instead, it seems to want to keep things nice and relaxed. But then, it’s when you take it on a snowy country road, which luckily, given Québec’s odd winter this year, I was able to do in the Victoriaville region, the Legacy’s chassis suddenly comes alive. A simple jab at the throttle with sudden steering inputs in a slippery bend allows the rear to slide out graciously. Hold down the accelerator, and the Legacy remains poised and stable while exhibiting a balanced and perfectly controllable drift – with no electronic nannies crashing in to ruin the party. 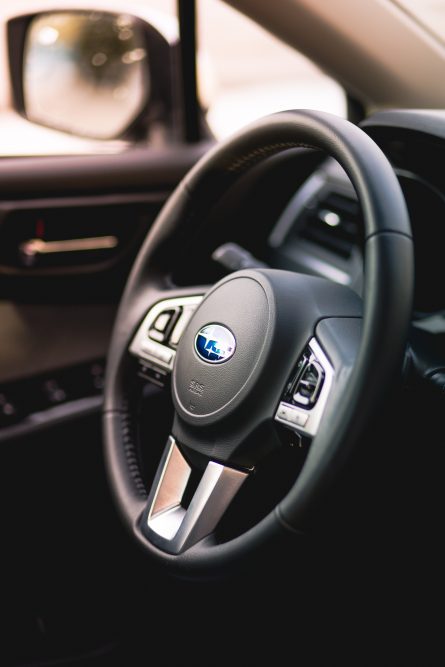 Subaru’s system is rear-wheel drive biased, so most Subaru drivers will tell you that it’s common for that rear end to slide out under throttle. It’s also a great way to minimize understeer. You control a Subaru with your right foot, not the brakes. This may feel counter intuitive to some, but adds character to a car and translates into a rather addictive experience. The more I pushed the Legacy, the more it spoke to me, asking for more, and putting me in total confidence the entire time. I give credit to Subaru’s engineers for developing a chassis that hides underneath a veil of civility, but comes alive when you command it to do so. That’s a lot harder to achieve than one might think, especially since there are no buttons to press to activate anything. You just get in and drive. 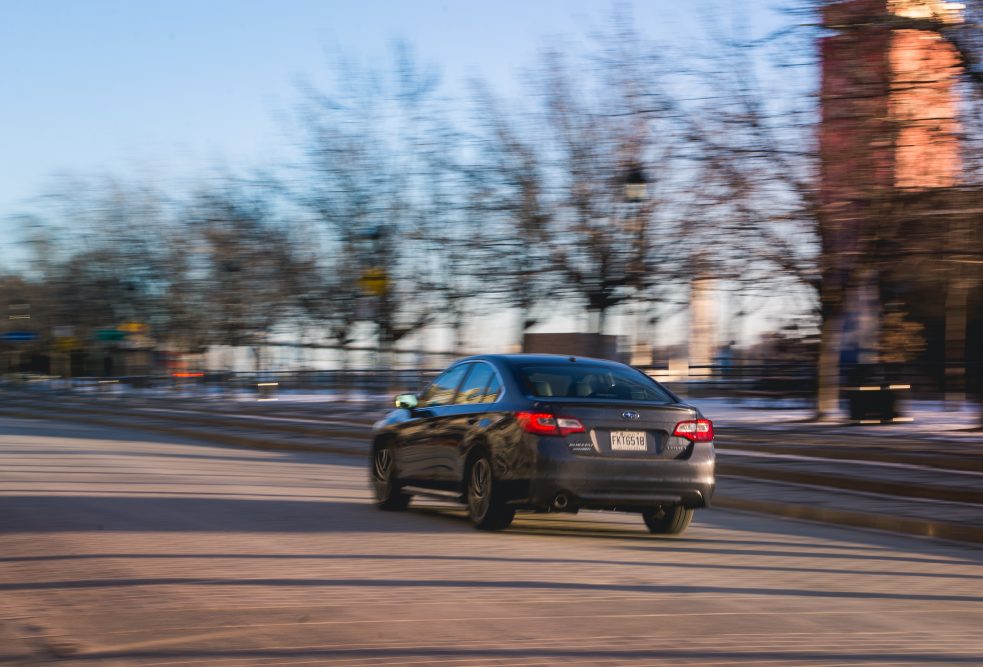 Step inside the 2017 Subaru Legacy and you’re greeted to a simple, functional, yet well assembled interior. There are no frills here, typical of a Subaru. Like in the Outback, I was impressed by the choice of materials used for the Legacy, especially the subtle stitching found on the seats and door inserts. It contrasts well with the car’s exterior paint job. My tester had a shade of blue hiding within its grey hue, which meant it had blue stitching inside, contrasted by bits of black and grey. The end result is classy, yet young and fresh. The Legacy’s overall controls and infotainment interface are also straight forward to operate, easily accessible, and well laid out.  After sampling Honda’s infuriating infotainment system, Subaru’s is a walk in the park by comparison. 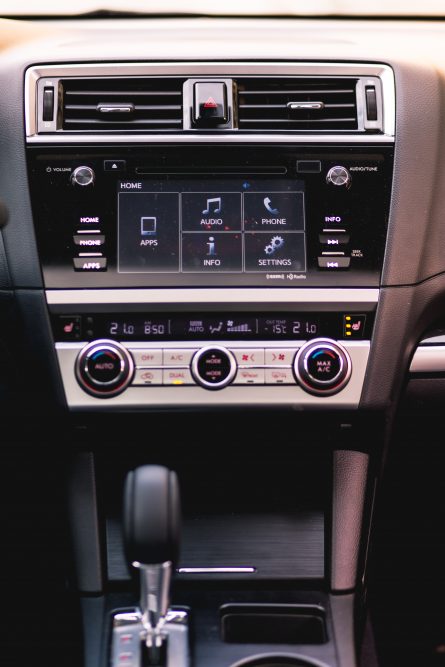 Unfortunately I can’t say the same about the Eyesight semi-autonomous technology package. Compared to Honda and Toyota’s systems, which work almost flawlessly in the background, Eyesight is intrusive and downright irritating. For instance, it’ll alert you of an imminent collision way too early, even when you’ve already began pressing your foot on the brake pedal. Also, the adaptive cruise control kept beeping at me every time it detected a car in front. Not only do I already have a windshield to inform me of this, but hearing an aggravating Tamagotchi-like beep every time I encountered another car drove me to the brink of insanity! Luckily, there’s an OFF switch for all these “safety” toys. 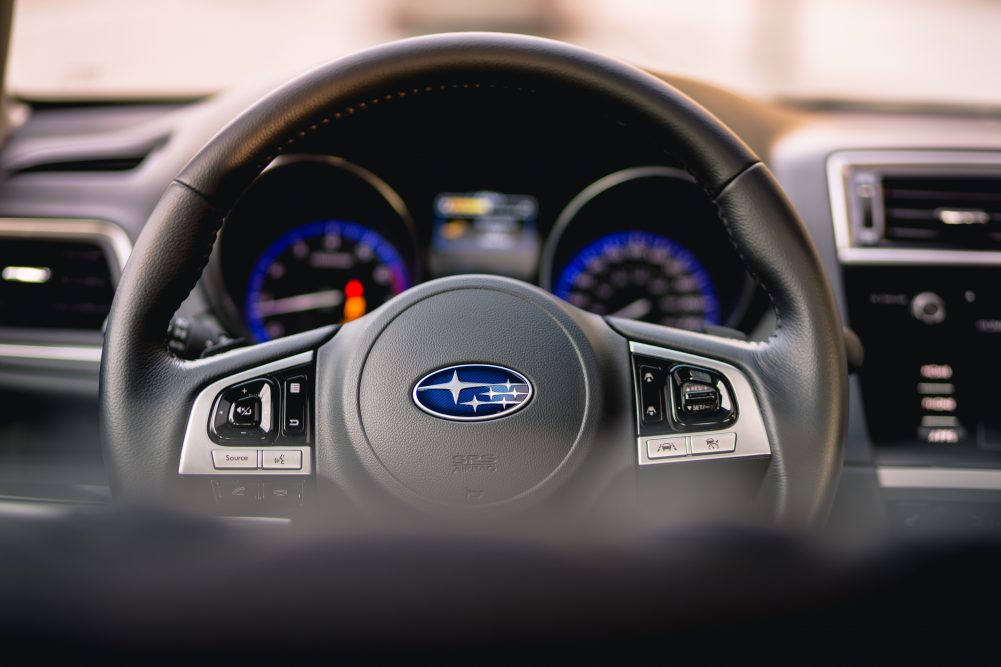 As for the rest, the Legacy is roomy, especially out back. And its trunk is downright cavernous.  Fuel economy remains an issue compared to its rivals, where I had difficulty keeping the car under the 10L / 100 km mark. Then again, for an AWD vehicle, that’s still better than most crossovers. Visibility is excellent all around, with comfortable and supportive front seats that unfortunately look kind of dorky in half leatherette, half fabric configuration. 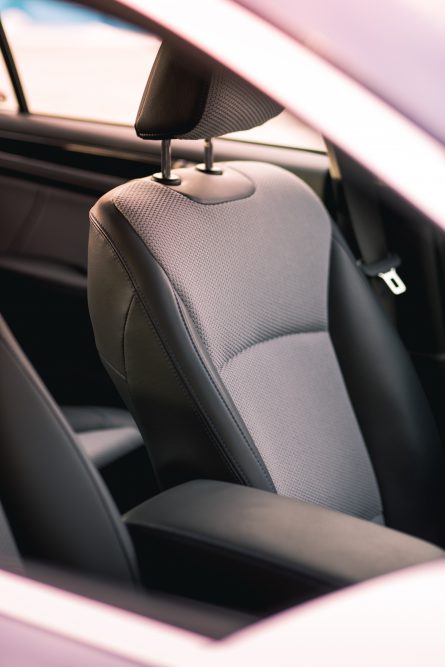 Prices for a 2017 Subaru Legacy begin at a very reasonable $25 205 for an entry-level 2.5i with a manual transmission. This is interesting considering you’re getting AWD and a stick for under 30K. The model you see here, the Sport with Technology package, sells for $32 105, and adds a variety of enhanced cosmetic tweaks such as a set of sportier looking wheels, a darkened front grille, chromed-out side-view mirrors, fog lights and those two-tone seats I mentioned earlier. The technology package adds Eyesight, which includes a full battalion of semi-autonomous safety tech for those who care. The highest Legacy trim, the 3.6R Limited with Technology package, tops the range at $37 605 – a still substantially affordable price for an AWD, 6 cylinder midsize sedan that handles like an Audi. 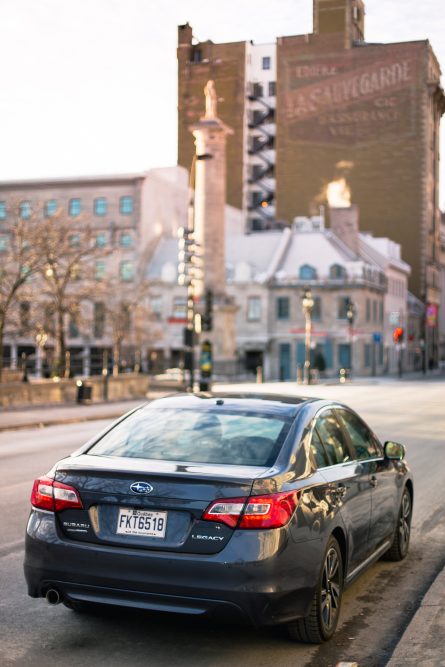 But if it were up to me, I’d stick to the base trim levels with the manual transmission, because at the end of the day, it’s the Legacy’s playful and impeccably balanced handling that really sets it apart from the segment. Everyone can sell you a comfortable, safe and technology-packed midsize sedan these days. But only Subaru will sell you a rally-derived, boxer-powered, all-wheel drive one with a physical shifter and three pedals. Simply put, the 2017 Subaru Legacy is the subtle midsize sedan designed for those who still prefer driving their automobile instead of it driving itself.

Review of the 2017 Subaru Legacy Sport by William Clavey