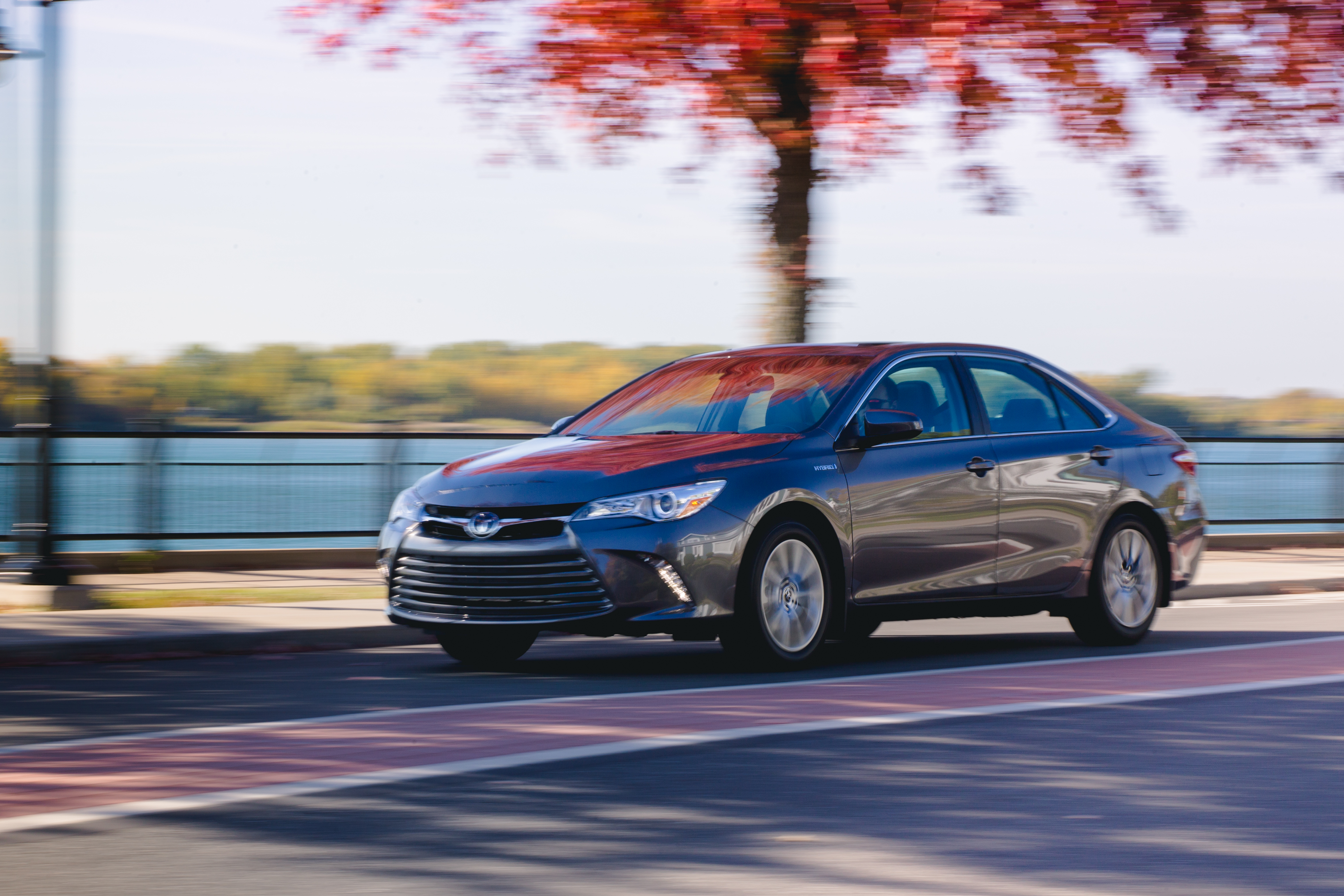 At this point, I think I have a good enough relationship with Toyota Canada to be blunt and say what I really think of the Camry: it’s a boring car. There, I said it. And I’m pretty sure Toyota lives with this reality very well. I mean, it’s not like this is preventing the big T-brand from selling millions of examples of its otherwise excellent mid-size sedan. Seriously, the Camry is plastered all over the Canadian landscape – it’s as familiar as Tim Horton’s coffee.

Of course, as automotive journalists, we’re interested in reviewing the fun cars. The fast ones, the sexy ones, the ones everyone is talking about. So when Toyota asked me if I wanted to take its 2017 Camry Hybrid for a “spin”, imagine how unexcited I was. Especially since the week prior, I was driving around in the attention-grabbing Porsche Macan. Still, since I enjoy reviewing any car, I figured this had the potential to be a lot of fun. Turns out it was. Because the Toyota Camry is the quintessential ghost vehicle. Nobody sees you in this thing. And, consequently, nobody cares about who’s driving it. Now that’s a trait that deserves merit on its own. But the Camry impresses the most not by its awfully sedate demeanour, but how it manages to do everything it was designed to do impeccably well, making it a car that’s hard to fault, which in turn makes it rather hard to review.

Go Green Without Telling Anyone 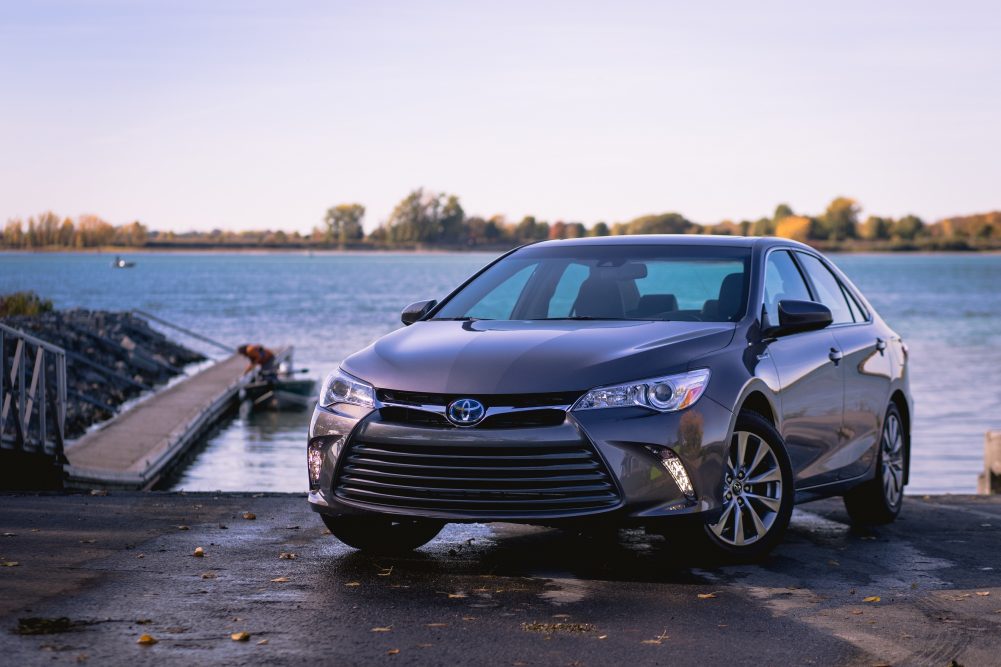 The 2017 Toyota Camry Hybrid averages 6.5 L/100 km combined, will drive 850 km with a full tank of gas, and run on electric power alone up to 40 km/h. Yet, no one will even notice. Because unlike the Prius I drove this summer, which goes out of its way to tell everyone it’s a hybrid with its extreme, if not a little too over the top styling, the naked eye would have a hell of a hard time differentiating a regular Camry from its hybrid counterpart.

Except for subtle hybrid logos located here in there, this is essentially the same Camry that took you home from the bar the week prior. 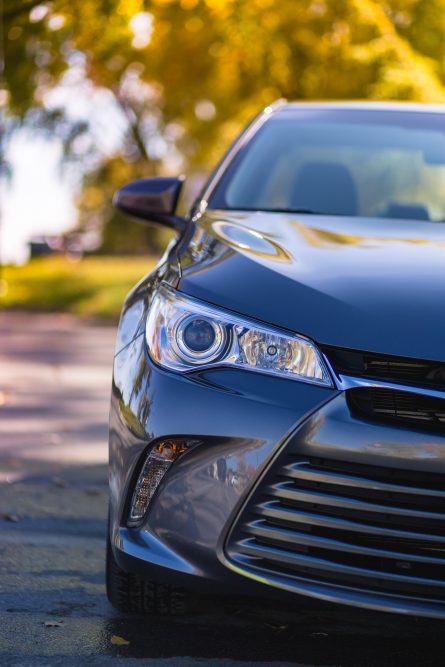 Although still a rather stealthy car, Toyota did give its stalwart sedan a thorough refresh last year to give it a bit more spunk. The front fascia now inherits the corporate Toyota/Lexus maw, accentuated by a more aggressive headlight treatment, and LED bumper-mounted daylight running lights. The overall stance of the car has also been widened, and the general look is much sportier than before. Is the Camry unattractive? Not at all, it all looks ok at best. I mean, it’s fine, but nothing that’ll make you go: “Wow, check out the new Camry’s front fascia!” 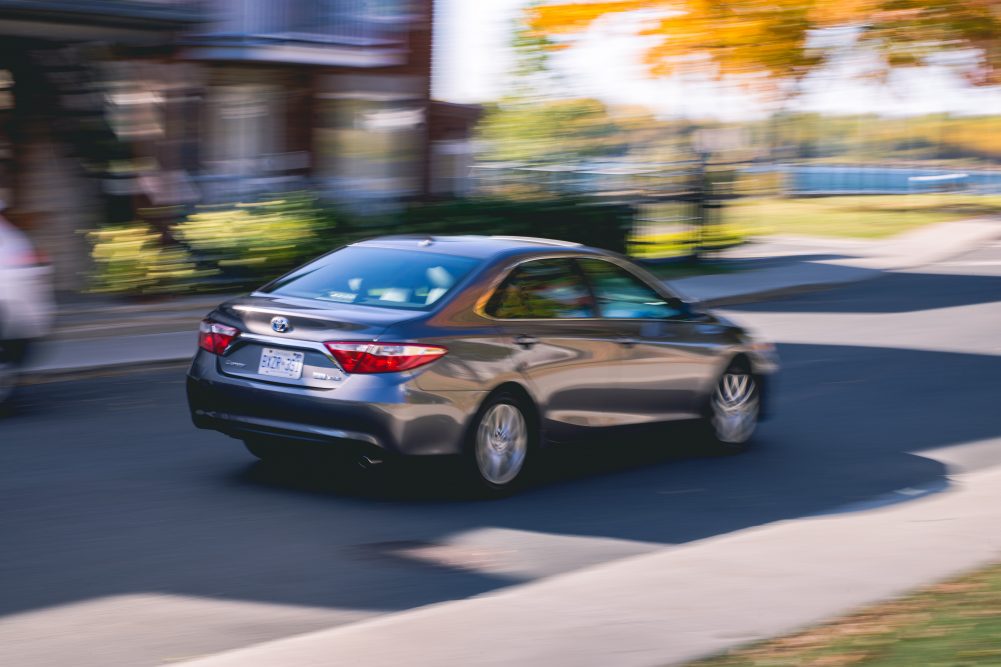 Out back, the rear of the car has also been cleaned up. Now smaller than its predecessor’s, the Camry’s tail lights are now more in tune with fresher Toyota offerings such as the Corolla and the face-lifted Rav4. It works, but then it doesn’t. Unfortunately, Toyota’s attempts of making the Camry look younger and more dynamic haven’t exactly hit the mark. Next to some of its competitors such as the Honda Accord and Chevrolet Malibu, the Camry remains rather bland – especially dressed up in this very invisible Pre-dawn Grey Mica paint job. 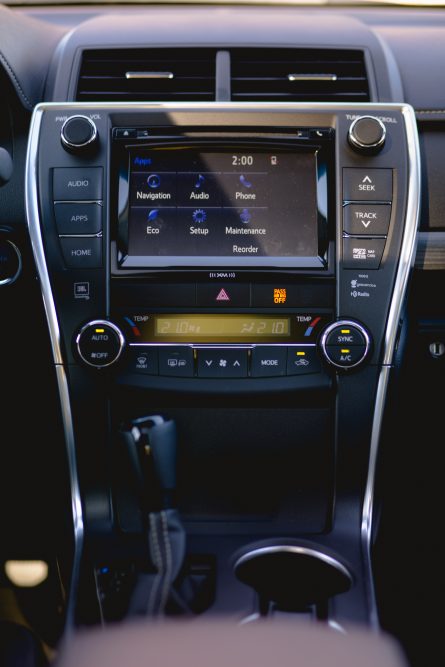 Inside, it’s pretty much the same story, where occupants are greeted to a pleasing and comfortable interior, but that won’t, shall we say, get your pulse running. There are good quality fabrics here, a result from last year’s update. There’s leather on the dashboard, and in the door inserts. There’s even piano black plastics here and there to create a genuinely upscale appearance. And, of course, this being a Toyota, fit and finish is well above average. It’s a good place to sit in, but that’s all – a good place to sit in. Somehow, in the 2017 Camry, everything feels “meh”. 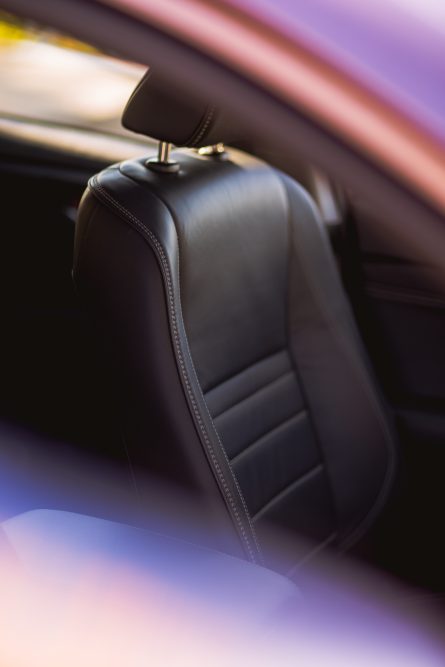 After spending some time playing around with the Chevrolet Malibu’s spunky and colourful infotainment system interface, or experiencing the Honda Accord’s airy and simplistic cabin, the Camry’s dull graphics and dated overall layout of its interior simply fall behind. Simply put, the Camry’s interior comes through as a “good enough” effort instead of punching over its weight, something the Accord did like a champ. 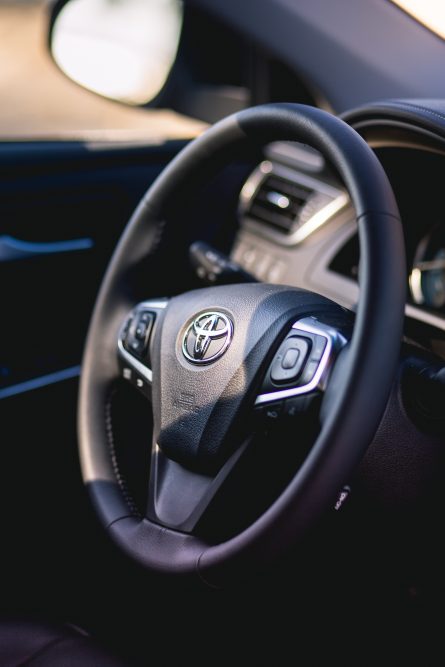 My Camry Hybrid was the top of the range XLE model, which means it came fitted with attractive leather seats and a fully electric lumbar support adjustment, making it a very comfortable cruiser.  Driving position is good, as well as lateral and rear visibility, and the rear seat in the 2017 Camry offers more overall leg and head room than both the Malibu and Accord. I was also impressed by how quiet the overall driving experience was. Like the Lexus ES, which rides on a similar platform, the Camry remains one of the smoothest and quietest sedans I’ve driven. It will also carry speed effortlessly. By no means is this a fun car to drive, but tortuous it is not.

Less Thirsty – Quicker Off the Line 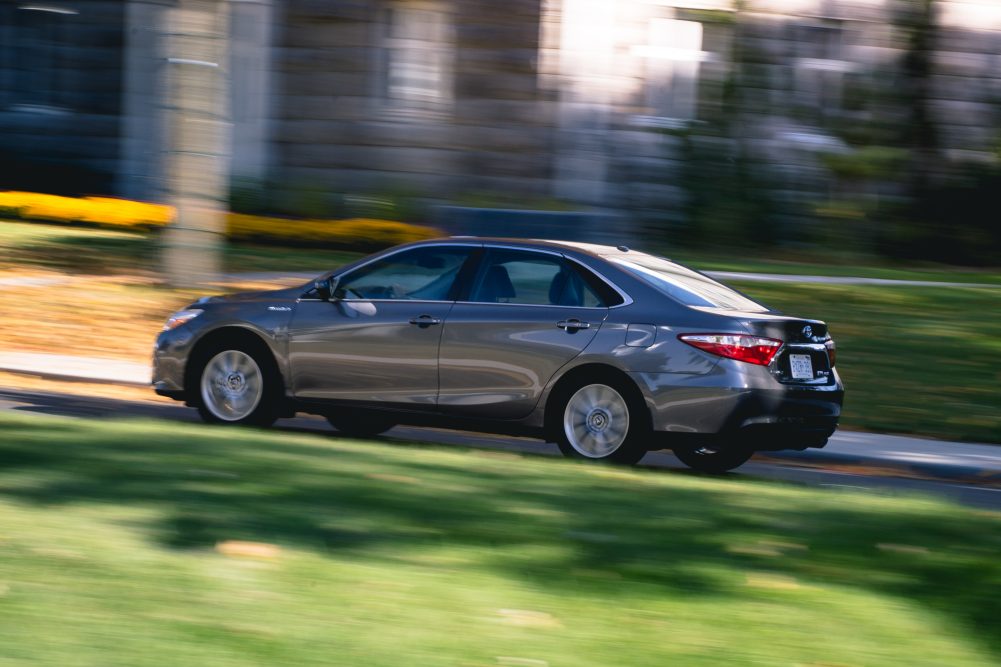 Very much like the Prius’ system, the Camry Hybrid relies on both of its available drivetrains to get moving. This is essentially the same system that has powered all hybrid Toyota vehicles for years. Unlike the Chevrolet Volt I drove a few weeks back though, which can be plugged in to recharge its juice, the Camry depends solely on its gasoline engine to recharge its batteries.  In this case, it’s roughly the same 2.5L four cylinder that powers base trims (with Atkinson cycle technology), but instead of churning out 178 hp and 170 lb-ft of torque, the Camry Hybrid’s combined 200 hp gives it an edge in overall oomph over its gasoline-only counterpart. 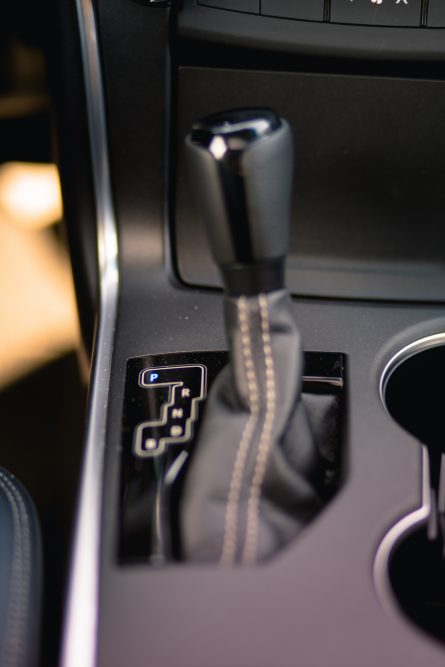 Thanks to the low end-torque generated by the 141 hp (199 lb-ft) electric unit, accelerations in the Camry Hybrid are brisk, and pick up is smooth, with very little delay from the moment you hit the accelerator to the moment the car gets up and goes. This makes it ideal for quick passing manoeuvres, or outrunning that yellow traffic light. Not like the authorities would notice you anyway. Because Toyota Camry. 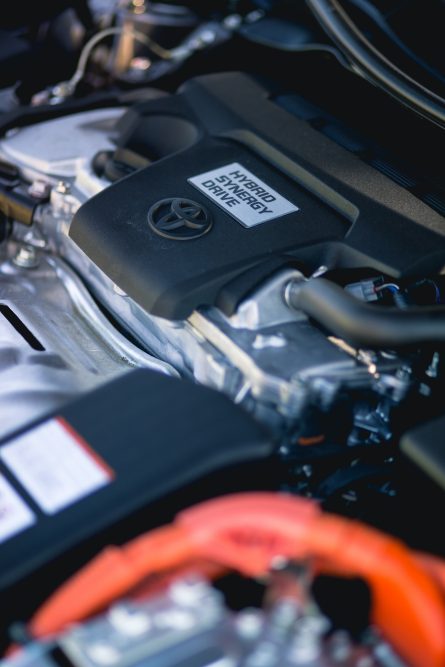 Fun fact, at 7.2 seconds, the Camry Hybrid is a full second quicker to 100 km/h than a standard 4-cylinder version.

Like the Prius, the Camry Hybrid has an EV mode, which allows it to be driven solely on electric power for up to 40 km/h; a neat feature when stuck in stop and go traffic or crawling your way through a mall parking lot. The Camry can also run on pure electricity when cruising at high speeds, just as long as you don’t press too hard on the accelerator. 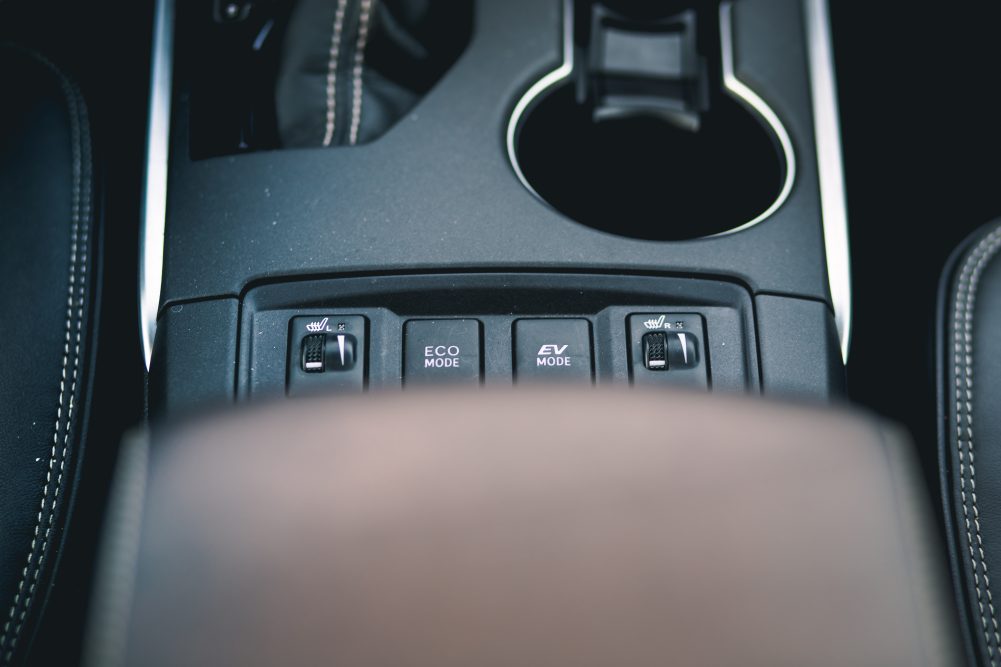 Sadly, like its exterior styling and overall layout of its interior, the Camry Hybrid’s eco-friendly technology is not exactly what you would call revolutionary. Although it has proven to be a reliable and bulletproof solution for quite some time now (ask taxi drivers), most of the Camry’s competition has skipped a grade and now offer plug-in hybrid systems to power their green sedans. Both the Chevrolet Malibu and Honda Accord Hybrid benefit from more powerful electric motors and lighter, more efficient lithium-ion batteries, allowing them to achieve more impressive fuel economy ratings. 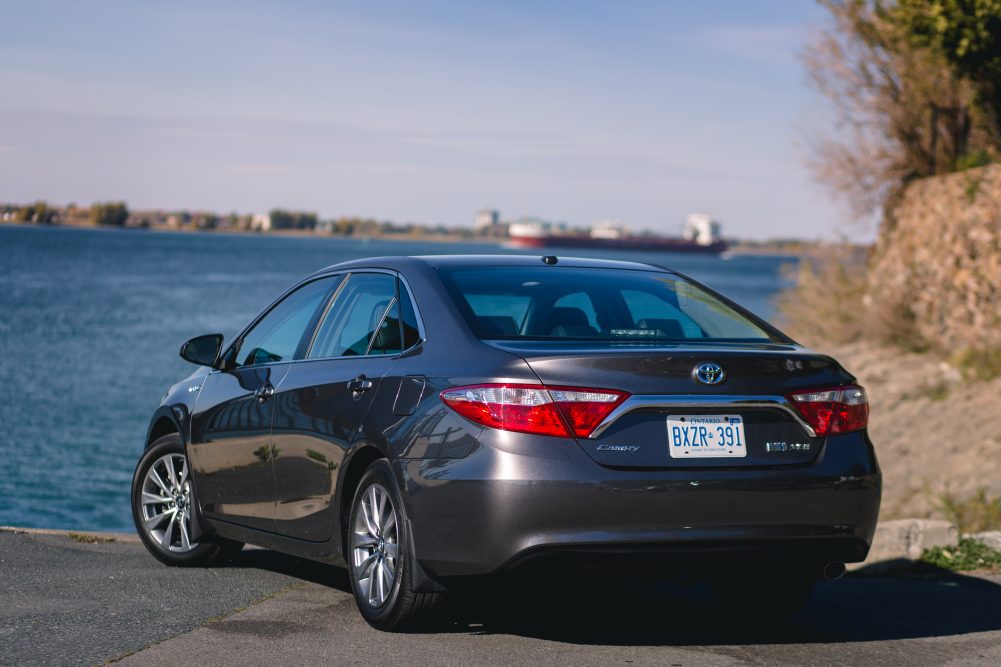 Indeed, the Toyota Camry Hybrid may not be the car that will win a numbers war, but it doesn’t prevent it from being a good car. Would I recommend it to someone looking for a good, affordable, fuel efficient, and reliable family sedan?

Of course I would.

Because the Camry hits the spot where it counts.  It’s “good enough”. And for most people who simply want to get their butts around affordably without a hassle, that’s the perfect sales pitch. Unfortunately though, the 2017 Camry Hybrid isn’t the innovative machine it once was, and no longer the king of gas-electric sedans. Truth is, in terms of styling, fuel economy, performance, and driving pleasure, most of its competition offers much more compelling vehicles that go beyond their intended function. 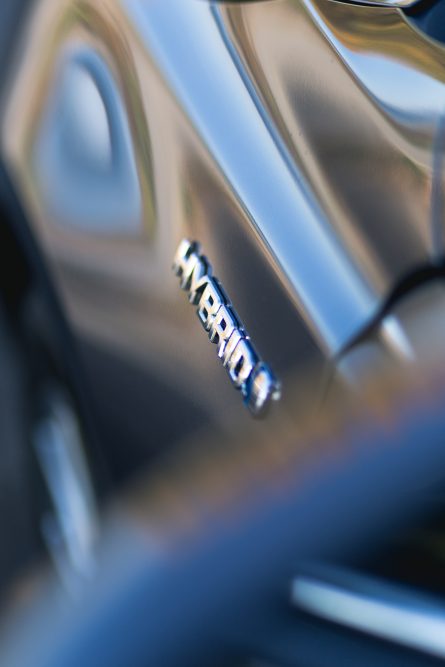 If, like me, you’re interested in cars that offer more than basic transportation, you’ll probably look elsewhere for your mid-size sedan.

Prices for the 2017 Toyota Camry Hybrid will range from $31 190 all the way to $38 090 for the fully spec’d XLE model such as my tester. It came with fancy convenience features such as a JBL sound system, a Qi wireless smart phone charger, adaptive cruise control, heated seats, and a collision mitigation system. Toyota will sell you a Hybrid SE for $33 565. It brings to the party sportier styling cues such as a more aggressive front fascia and sportier wheels to give your Camry a more youthful appearance while remaining thrifty at the pump. And also less invisible. 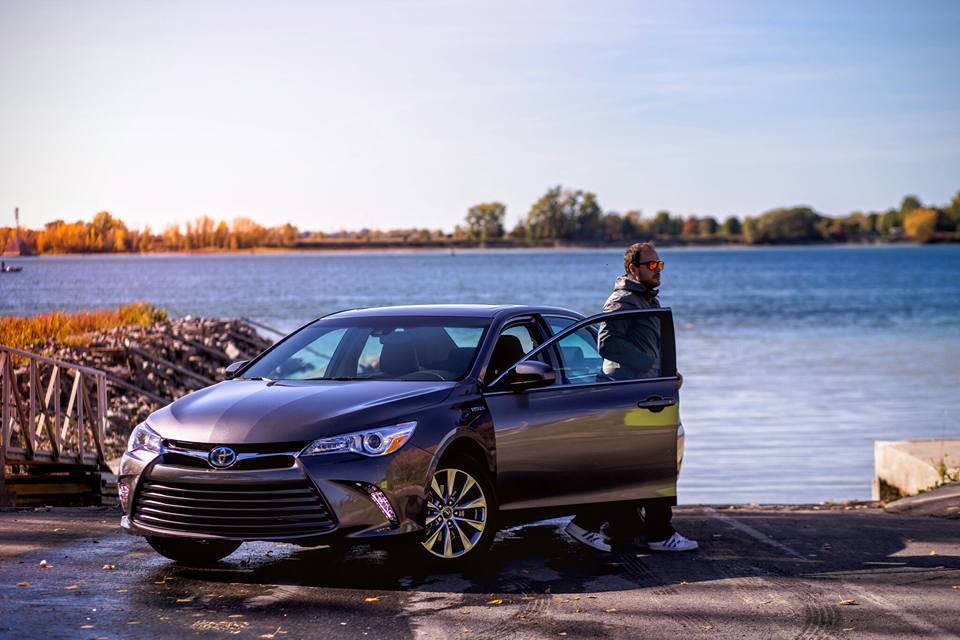 So there you have it. I managed to review a Toyota Camry Hybrid. And trust me, it wasn’t easy. Truth be told, no matter what our reviews say about this car, they won’t stop Toyota from selling them like hot dogs. It’s one of those no-brainer vehicles that somehow manages to rake in massive sales numbers no matter what people say about it. And, in all honesty, this is probably the most reliable hybrid your money can buy. That said, although all carmakers want to increase their profits, a line must be drawn between building cars out of passion, and building them for the sake of profits. The frustrating part in Toyota’s case is not that we doubt that they can build passionate cars. We know they can. It’s that they’re well aware of how boring their Camry is, and doing absolutely nothing to change that.

Review of the 2017 Toyota Camry Hybrid by William Clavey