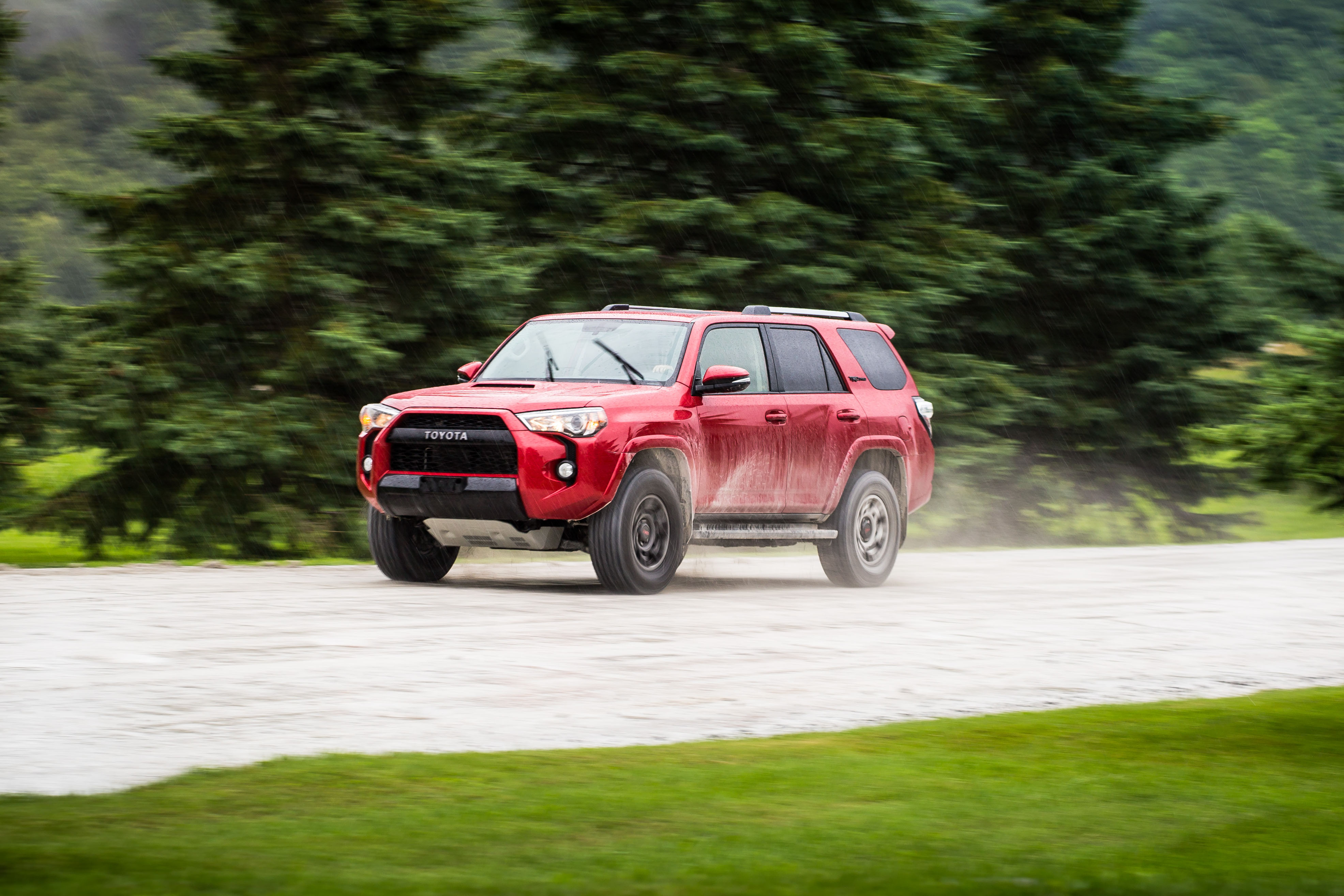 The 2017 Toyota 4Runner TRD Pro is the rough and tough, old-school and square-jawed SUV that won’t let you down on your next outdoor adventure. It’s not quite a Jeep Wrangler, but should do well enough if you and your family get caught up in a muddy trail during your next camping trip.

And trust me when I say this: the day you’ll drop your kids at school in your 4Runner covered in mud, they’ll be the most popular little rascals in class.

This One’s Been Around The Block 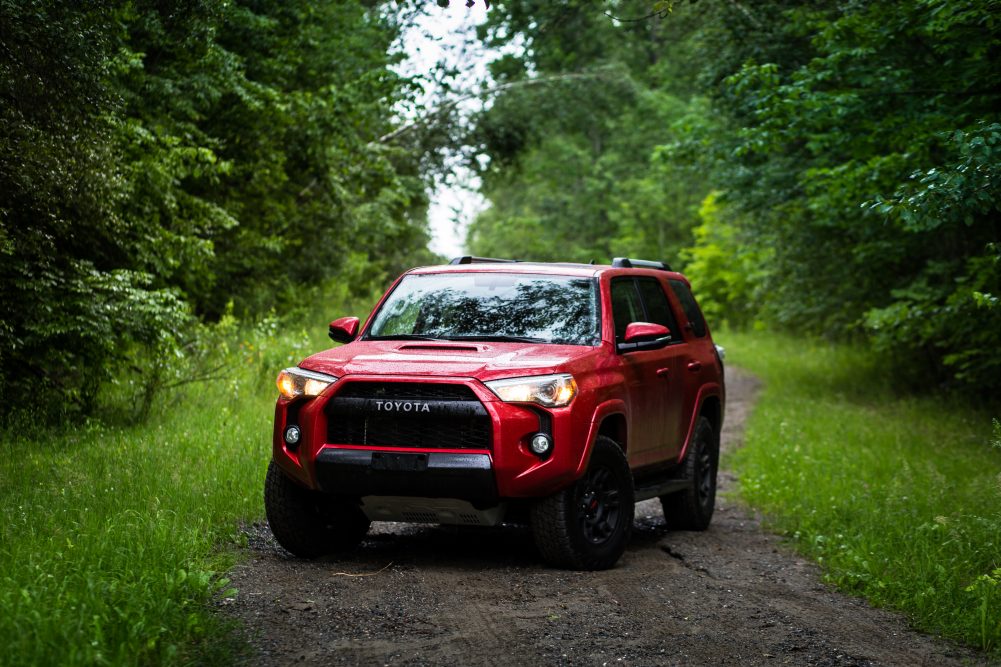 Introduced in 1984, the Toyota 4Runner was launched to replace the J40 Land Cruiser as Toyota’s official off-road machine. The first 4Runners were nothing more than a Toyota pickup with an enclosed fiberglass bed.

But over the years, and throughout five generations, the 4Runner evolved into its own, distinct product, growing alongside Toyota’s lineup of trucks and crossovers as a real SUV designed specifically for adventure junkies. These special kinds of customers demanded something that could take them places a car couldn’t, all while carrying their gear, friends, and family along the way. And the 4Runner always delivered. 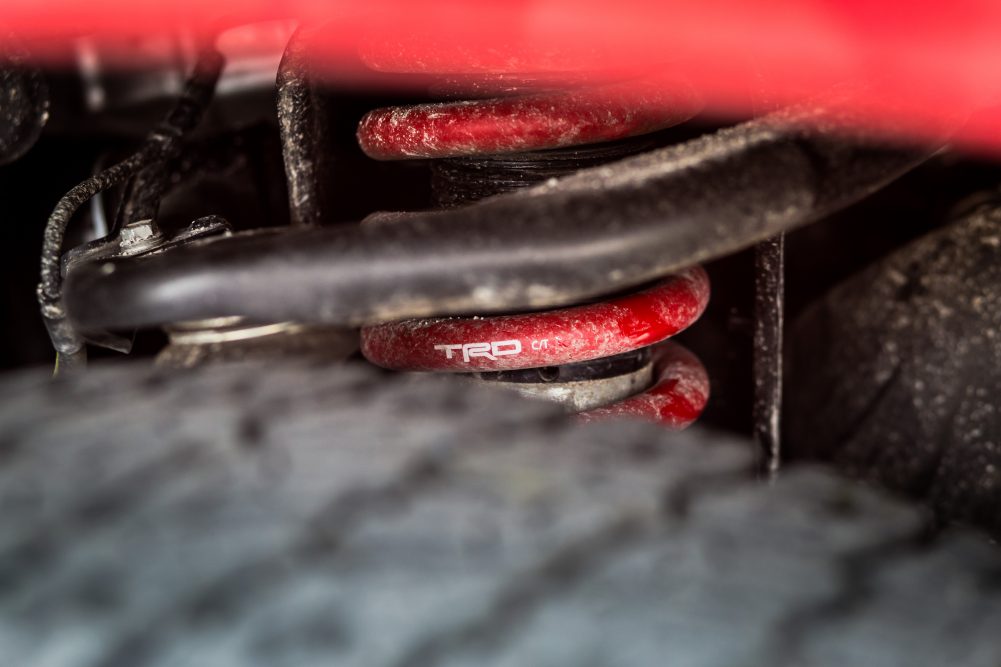 The model you see here is the TRD Pro, and it’s the latest addition to Toyota’s trio of bonified offroad vehicles, alongside the Tacoma and Tundra.

Don’t see the TRD Pro as a completely different vehicle like a Ford Raptor, but rather a special edition package that adds a raised front suspension, Bilstein shocks with remote reservoirs, Eibach springs, offroad tires and skid plates. The goal is to make the 4Runner even more indestructible when attacking the real, harsh terrain. 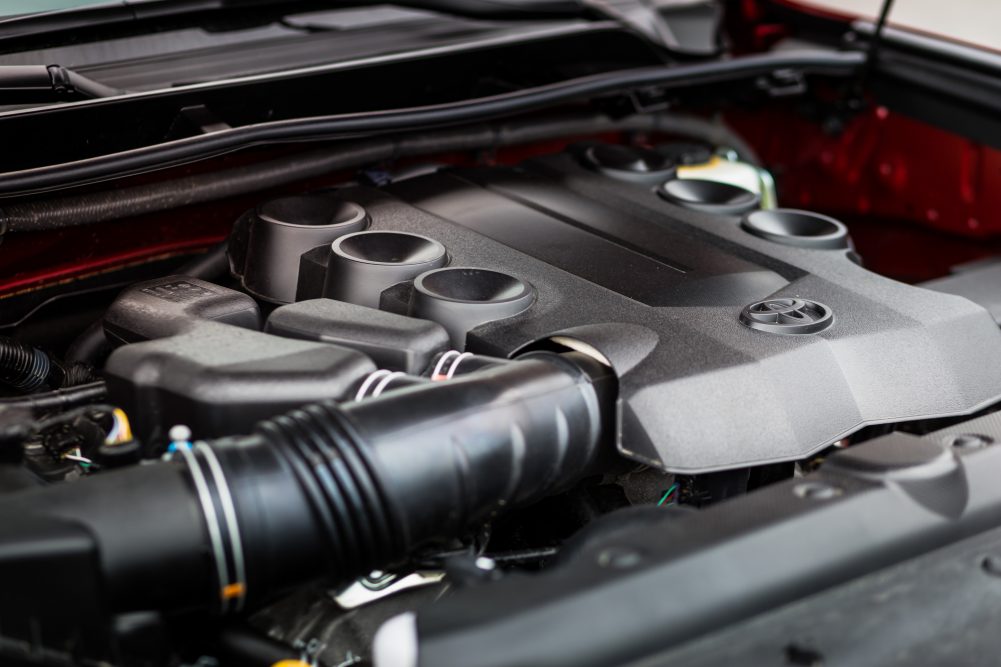 Mechanically, the TRD Pro is pretty much identical to a standard 4Runner. The engine is still a 4.0-liter V6. Toyota says it’s good for 278 horsepower, and 271 lb-ft of torque. This is still a classic body-on-frame construction, with an electronically controlled locking rear diff, and a two-speed transfer case with a low range. The way sport utility vehicles used to be built.

The only available gearbox is a somewhat dated five-speed automatic. 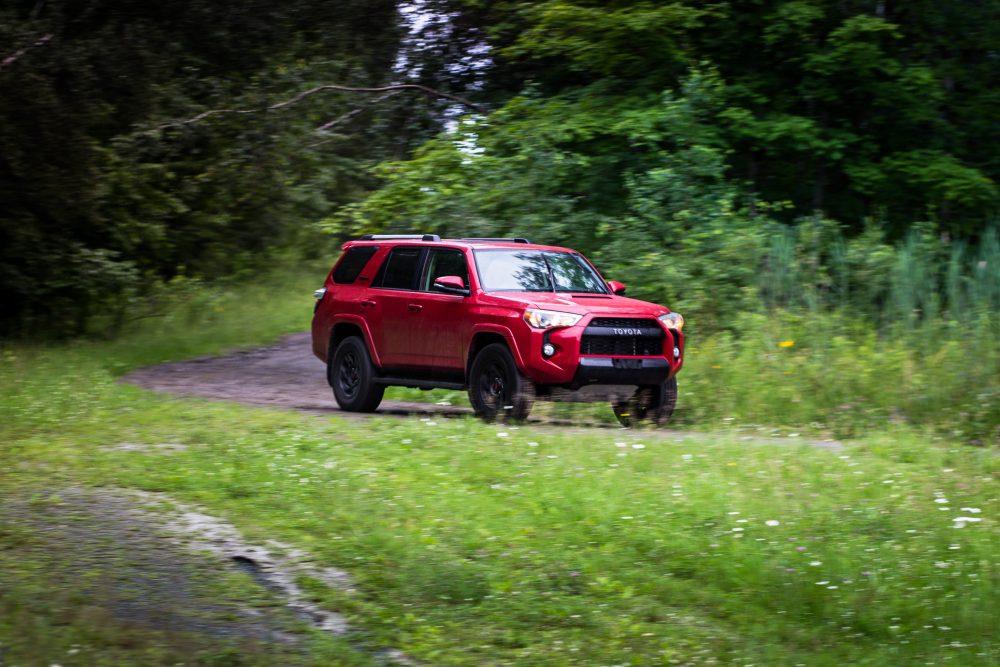 Because the 4Runner simply won’t die and will humiliate a lot of larger trucks in a trail, it has become one of the most sought-after outdoor utility vehicles of the two past decades. The 4Runner has also risen to almost legendary status in the off-road community.

Even if North Americans are flocking to more car-like utility vehicles like the Ford Explorer and Honda Pilot, there is still demand for these kinds of trucks. 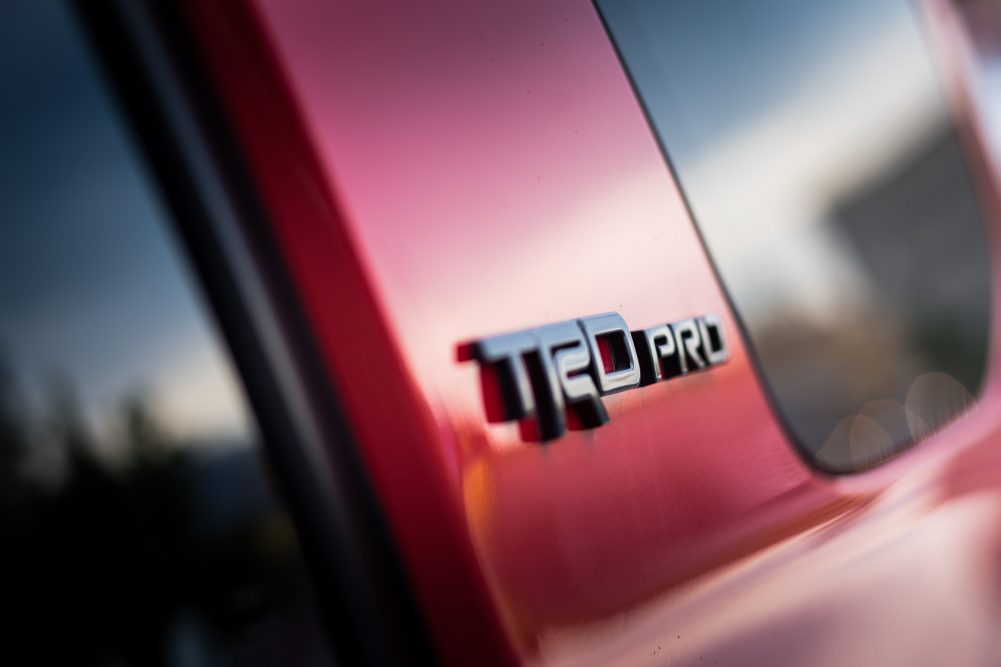 Toyota beat a personal sales record with the 4Runner last year, North Americans bought 118,000 of them. That’s still not quite up to par with Jeep Wrangler sales (over 204,000), but these solid numbers mean genuine offroad SUV’s are still a thing, and aren’t going to disappear anytime soon. 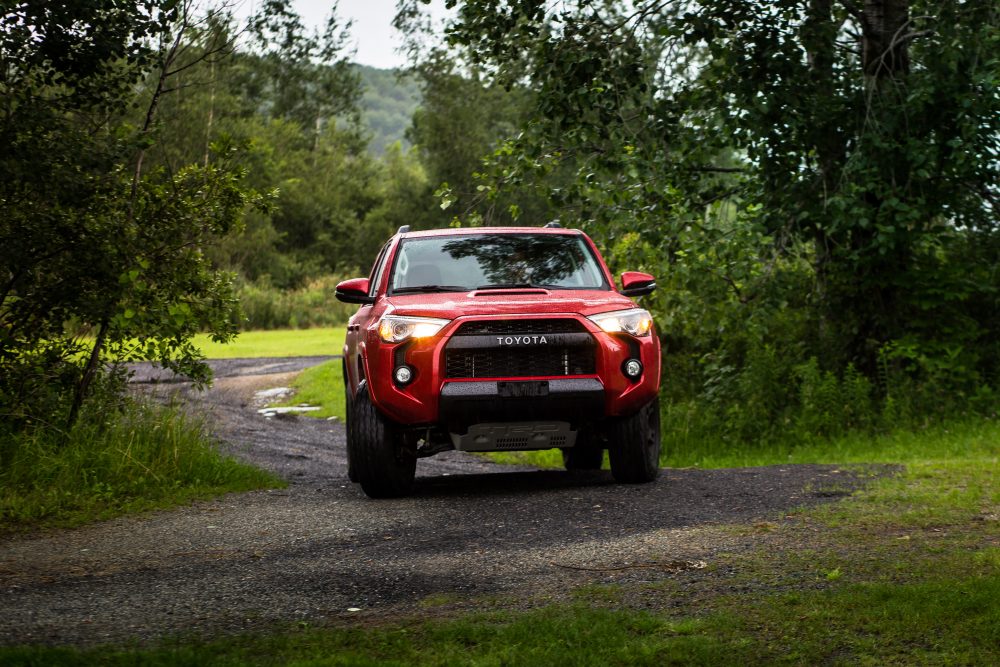 The first thing you notice when climbing aboard the tall and sturdy 4Runner TRD Pro by way of its blacked-out sidesteps is how many buttons and modes are laid out across its blocky, GI-Joe inspired cabin.

There are even knobs on the ceiling, check it out: 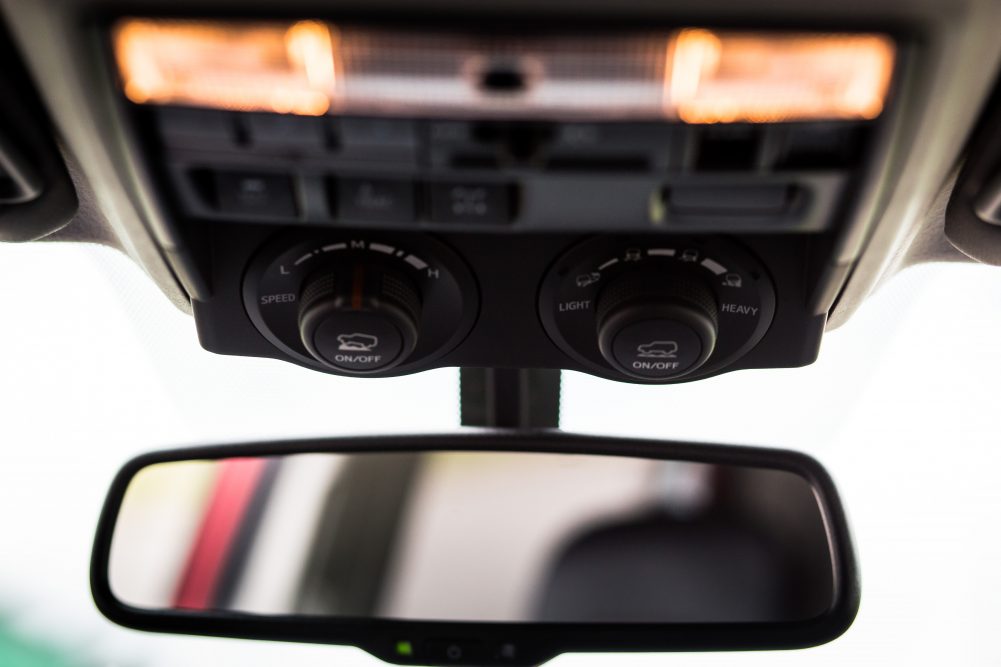 But unlike the gimmicky snow mode button that you’ll find in your Nissan Rogue, these knobs and dials are the real deal. They command the 4Runner’s full battalion of rock climbing tech, which have fancy names like “kinetic dynamic suspension system”. 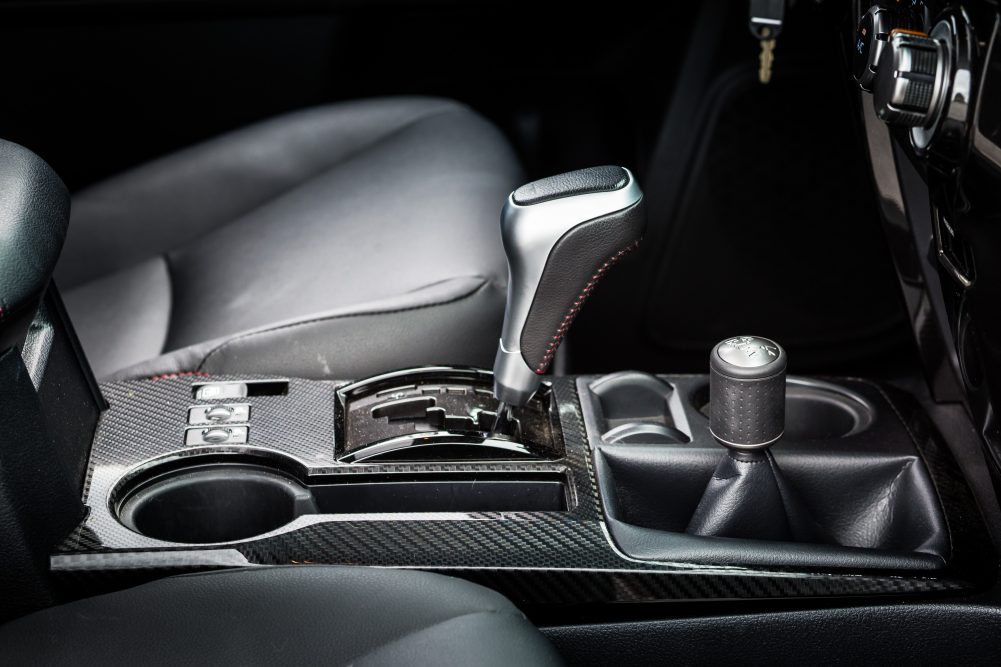 I could list out the Toyota brochure about what these features actually do, but I don’t want to put you to sleep.

Frankly, behind the wheel it’s hard to know where to start. To me, offroading was always about hitting the trail and finding the best way to get across. And I figured I’d fiddle with these electronic gizmos the moment things would get tricky. That’s also when I realized I knew nothing about offroading.

The irony here is that prior to setting out on my weekly test drive with the thing, Toyota specifically told me: “No offroading!” Great, how the hell am I supposed to test out all this tech in a the middle of a city like Montréal? 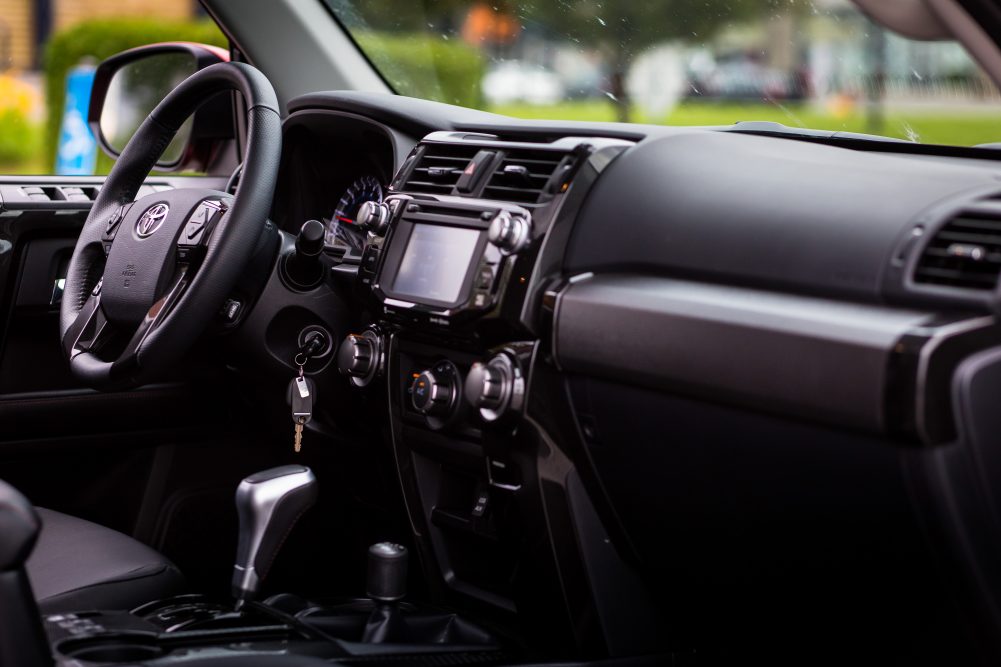 Sure, our potholes are pretty intense, and there are a few hills around here, but they’re kind of a humiliation for a Dakar-inspired all-terrain vehicle such as this. So I hit the road in search of a bit of mud and rocks. 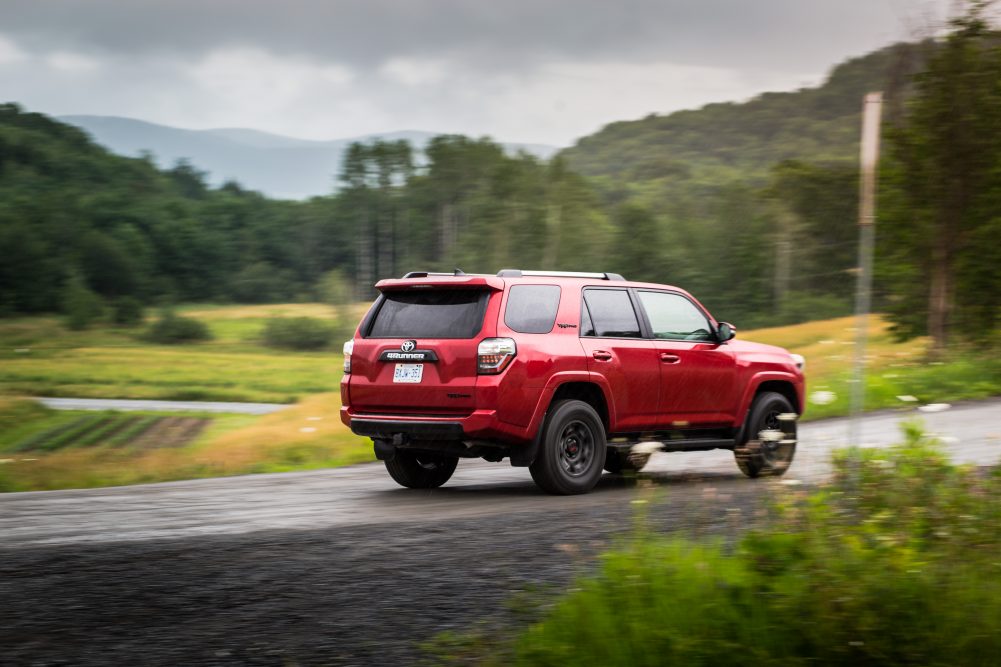 It’s hard to fault the 4Runner for what it is, because it was intentionally built to be rough around the edges and feel a bit old. But its drivetrain is desperately in need of a major overhaul. That 4.0-liter feels and sounds exhausted when you push it hard, as if it were telling you: “Woah, kiddo, chill out. We’re not in a hurry here”. 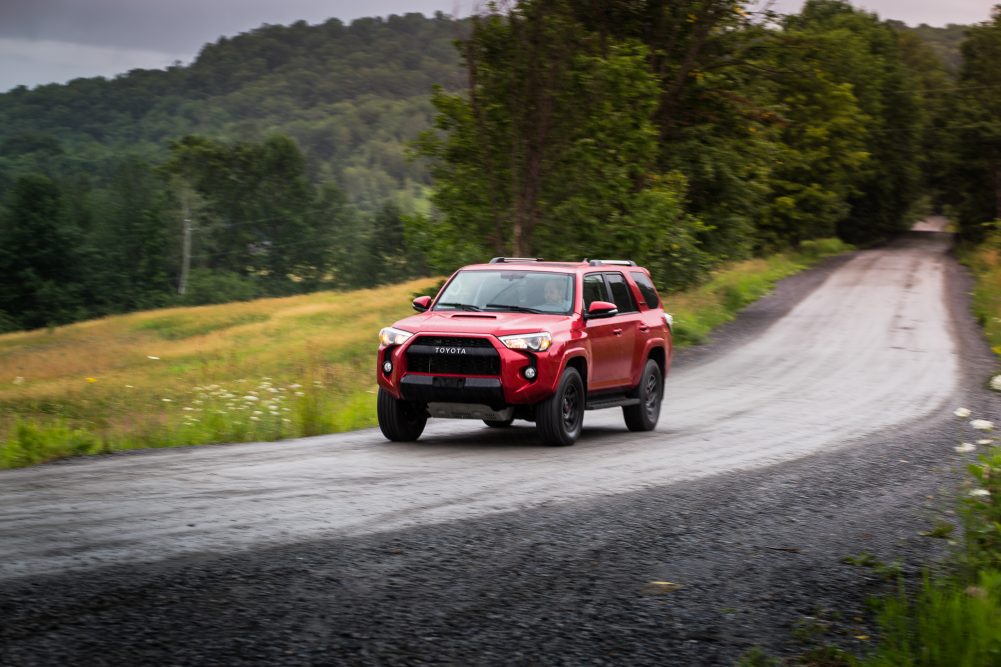 I also wish my tester had been fitted with the same performance exhaust as the Tacoma TRD Pro, which sounds absolutely gnarly. Without it, the 4Runner sounds like a Sienna minivan. 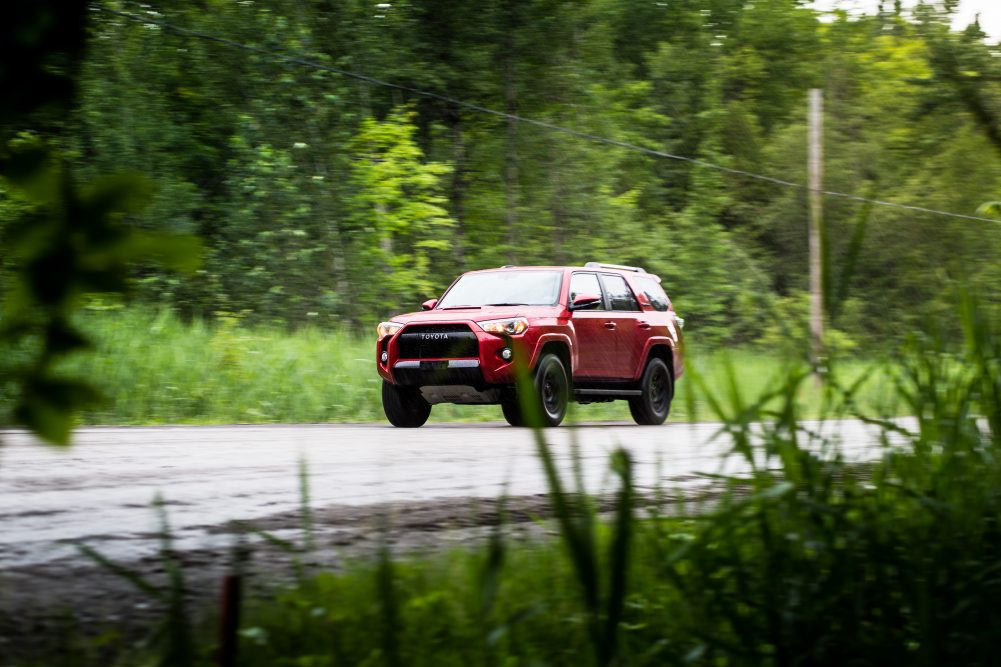 Toyota says the Bilstein shocks are softer than the standard set, I haven’t driven the standard 4Runner, but during normal driving in town, the TRD Pro was smooth and compliant over rough ground.

Of course, given its body-on-frame construction, the overall ride remains choppy compared to the car-based offerings out there. And because the suspension is so soft and those loud tires are so large, the big Toy Toy wobbles and dips under sudden moves, tires slapping over train tracks, but it still somehow remains all soft and cushy. 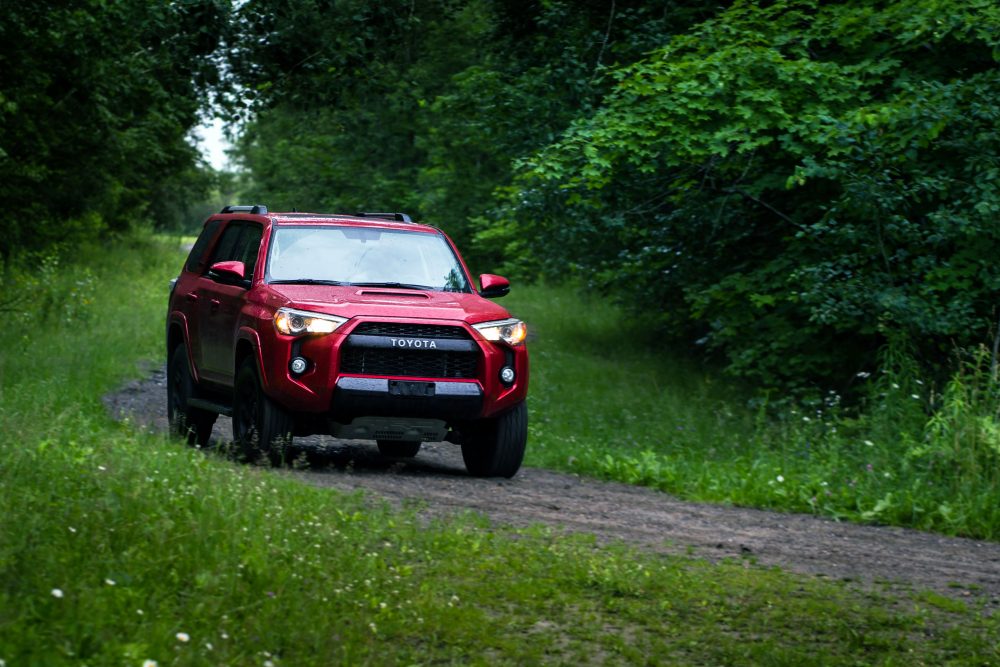 The 4Runner’s cabin is also comfortable. I personally dig the leather, red-stitched chairs in which I’d be willing to drive across the country. Rear seat room is satisfactory in the TRD Pro, but unlike SR5 and Limited 4Runners, this one doesn’t get a third row of seats, so it will only engulf five full-size humans. 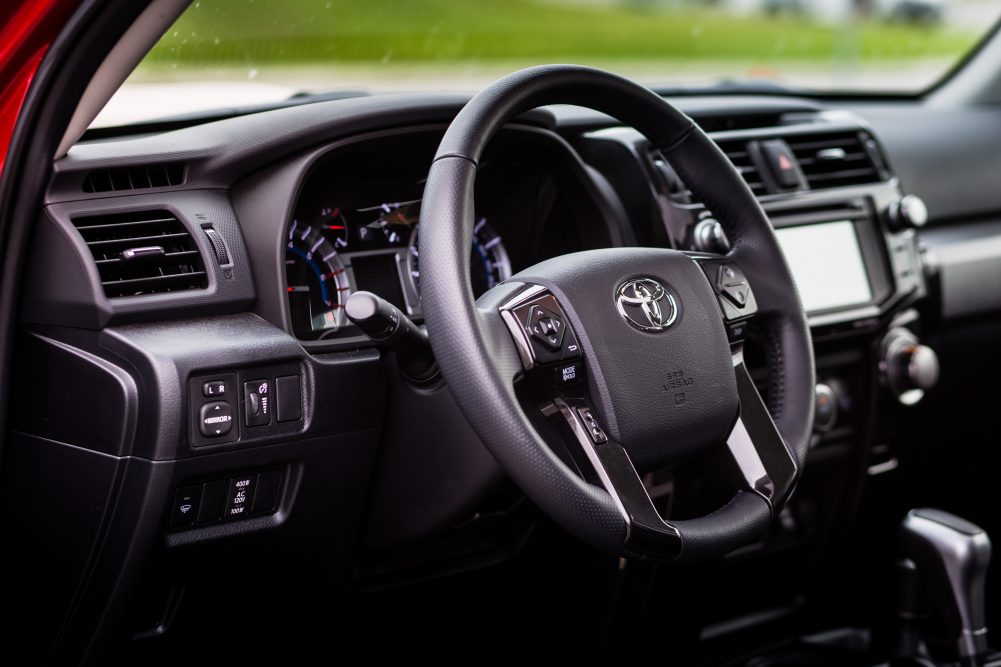 But cargo space is quite decent without the third row. When all seats are raised, the trunk will give way to 47.2 cubes for your outdoor gear. That’s 30 cu-ft more than a Honda Pilot. When that bench is lowered, you’ll pulverize all seven-passenger crossovers out there at 88 cu-ft. 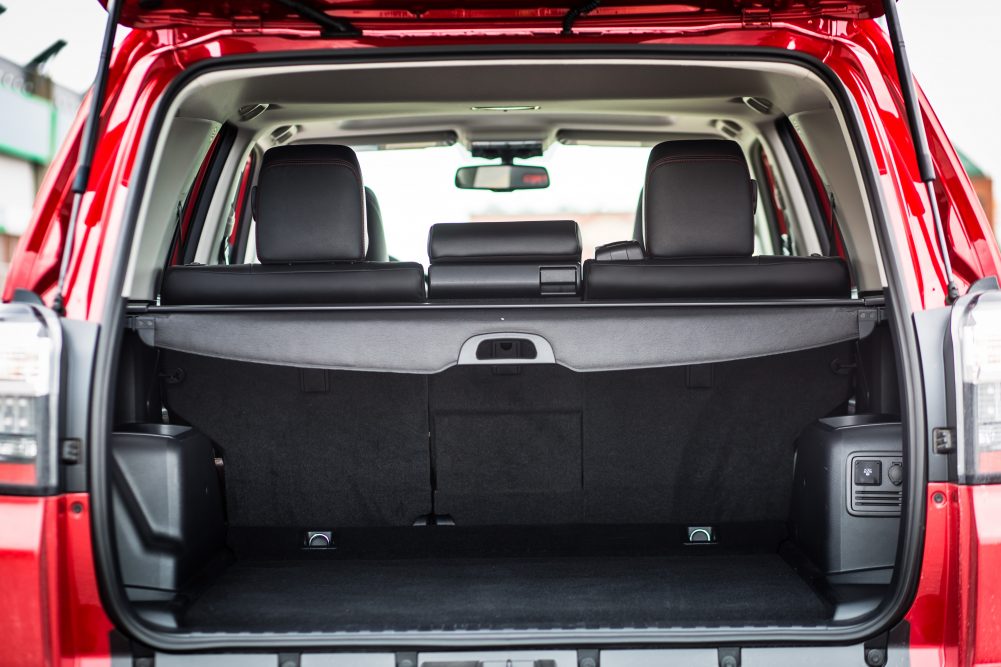 So if you still have hardcore offroading and extreme adventure in your blood, and you’re thinking about having kids, limit yourself to two offspring, and your family should do well in a 4Runner TRD Pro.

Bring It Out There 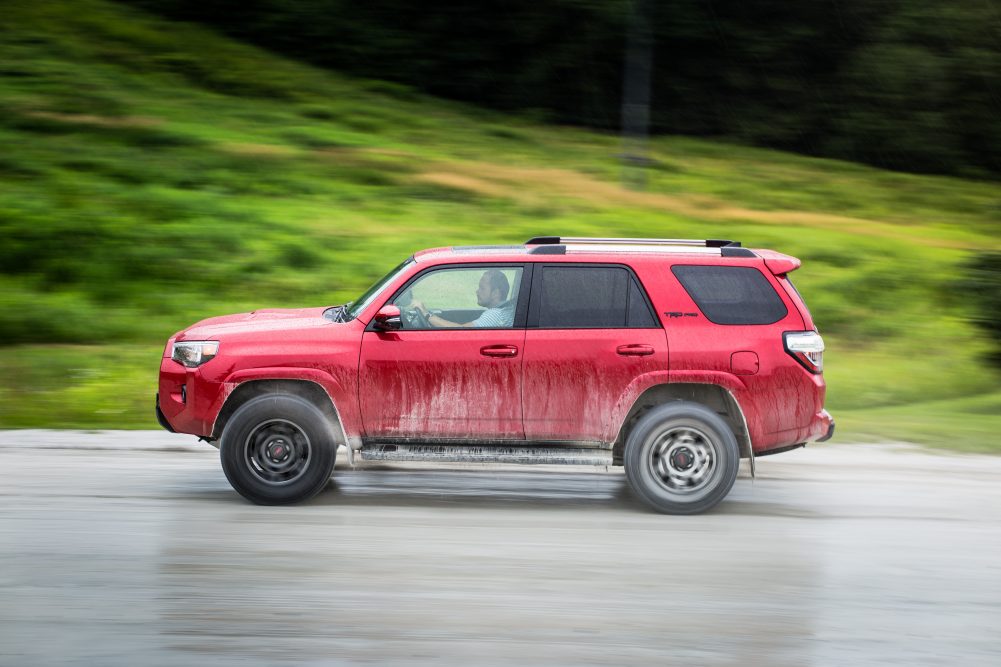 There’s no point in hard driving this thing on the road. As expected, the handling is quite awful. Body roll is excessive, and acceleration kind of sucks. The gearbox needs at least one other gear, because it often falls short and doesn’t downshift when you need it.

Where the 4Runner makes sense is off the road. 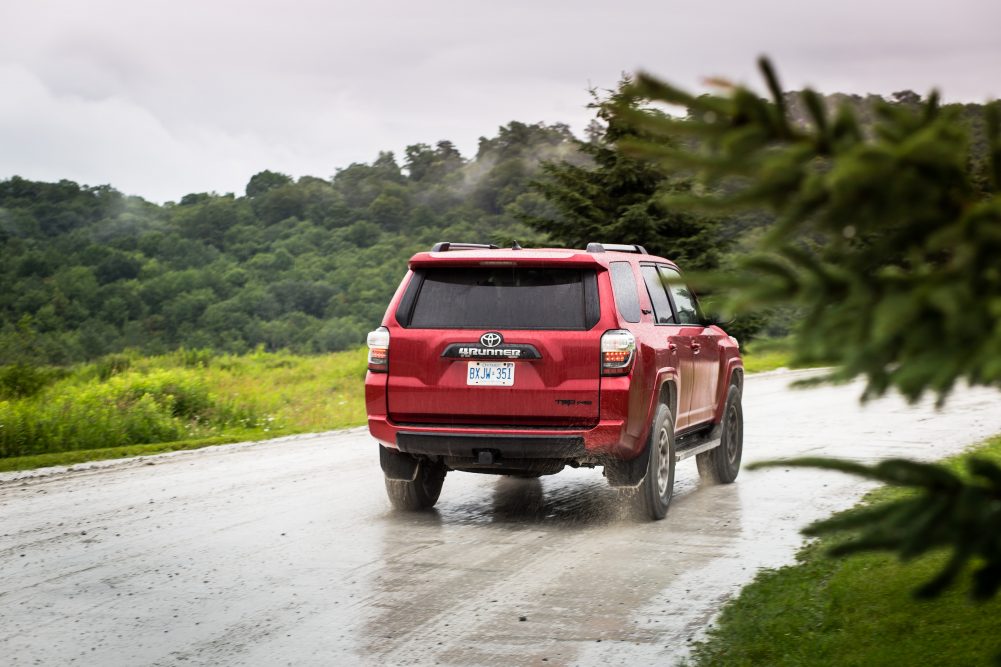 I personally took part in some light-grade offroading and had a bit of fun with the low-range four-by-four lock setting, carving my way through a bit of uneven terrain, engine hustling as if it were a tugboat, and quickly crushing everything natural that dared stand in my way.

Out of all the available tech this thing offers, the one that impressed me the most was Crawl Control. It’s essentially a very advanced traction control system that regulates wheel spin to a point where the truck can out-dig itself from a deep section of sand or mud.

Since it was raining the day I went out in the boonies, I was able to give the system a try in a few muggy areas. In my case, it worked, but I quickly realized the feature was designed for much more serious conditions than this. 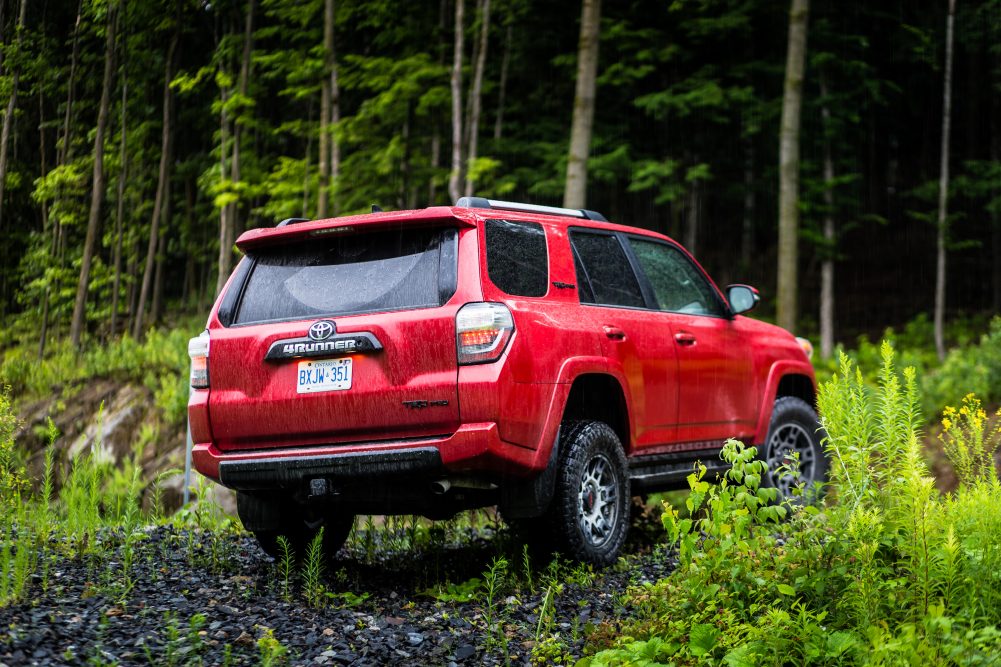 I still allowed myself to drive the 4Runner fast on a broken utility road where a conventional car would have blown its suspension through its fenders, and the 4Runner remained smooth the entire way, taking in the hits, seemingly unsettled the entire way. It was also fun as hell, and like the Tacoma TRD Pro, the 4Runner is a bro truck you’ll want to keep as a trusty companion forever. 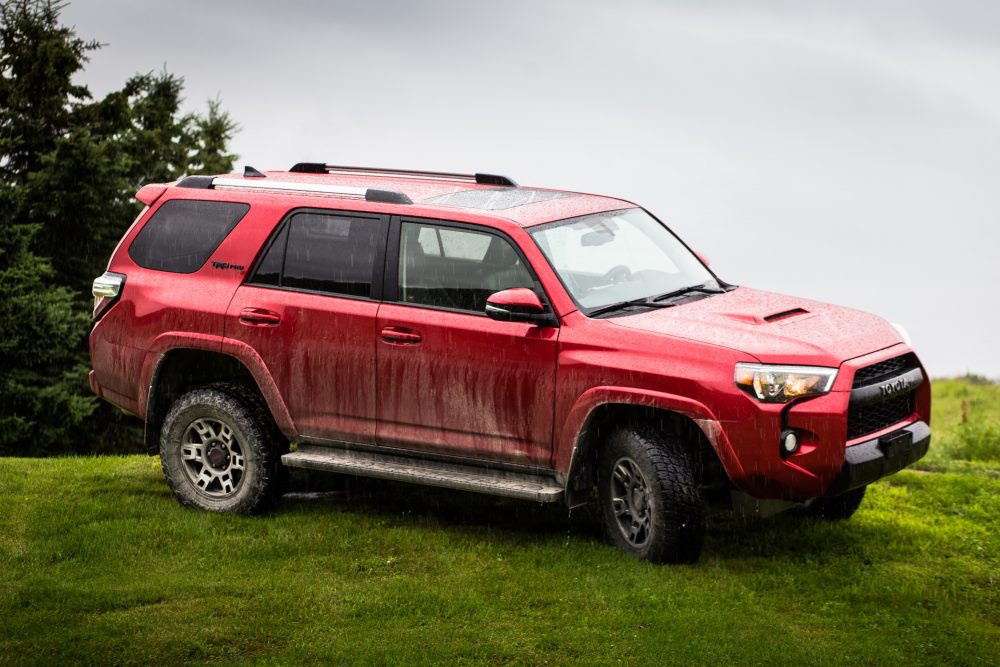 Toyota will sell you a base 4Runner SR5 for $47,084. The TRD Pro sits just under the top-flight Limited model within six available trim levels, and comes as-is, with very little options for $54,479.

That’s in a similar ballpark as a Honda Pilot or a Ford Explorer, or a fully spec’d Jeep Wrangler Rubicon Recon. That pricing is wise from Toyota since the 4Runner TRD Pro splits the difference between a mallfinder crossover and a hyper-focused rock crawling machine. 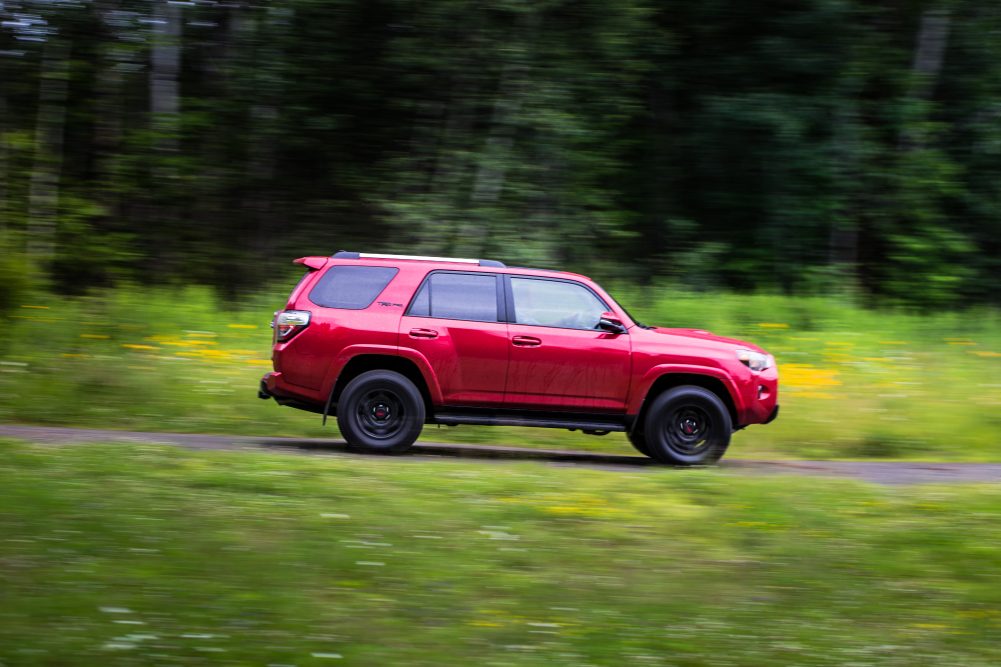 Also, don’t forget about resale value for Toyota trucks in general. Even the most rusted through, high-mileage examples still sell for lofty amounts. So yes, this thing is worth its price if you plan on giving it hell in the trails. 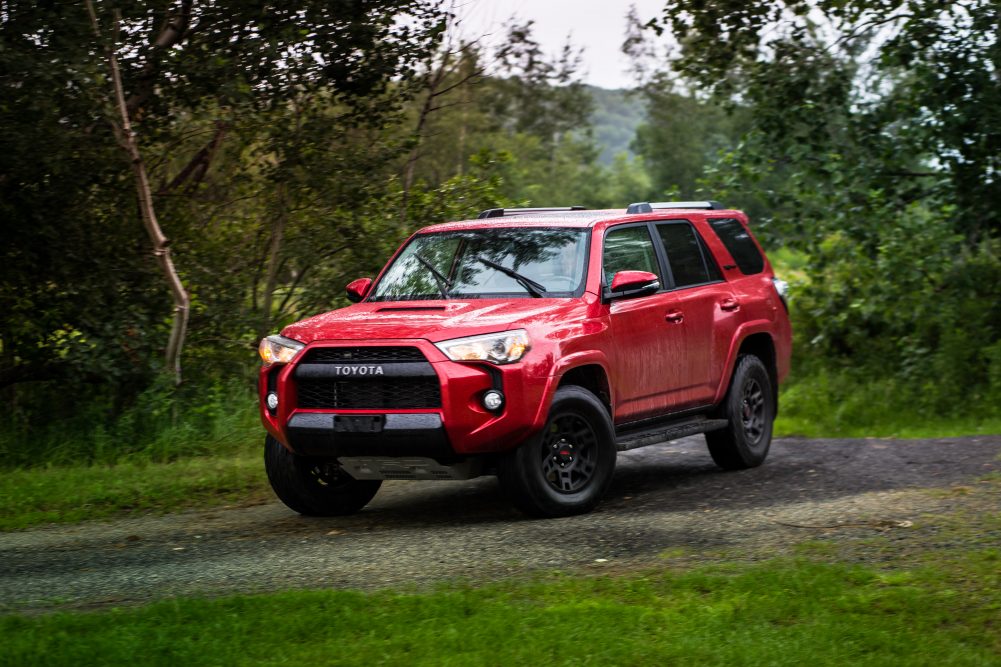 In the vast sea of over-competitive crossovers and SUVs, which put the emphases on ride, comfort and daily usability first, the 2017 4Runner TRD Pro comes through as a prehistoric dinosaur that bobs and weaves in the corners, doesn’t accelerate all that quickly, sounds like it’s complaining all the time and drinks fuel like a retired alcoholic hockey player downs moonshine. 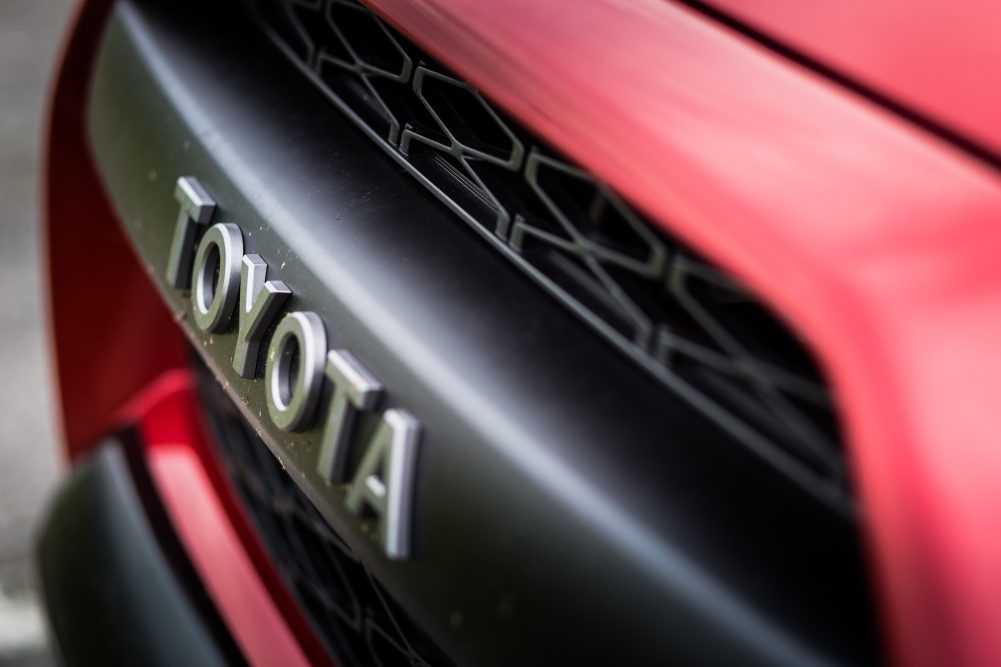 But it is, without question, a serious offroader, a trait most utility vehicles out there could only dream about. Even if it’s heavily faulted, I personally love everything about this truck, and we should all be thankful it still exists.

Here’s how you should see this thing: if a nuclear attack were to trigger tomorrow morning and we all needed to escape to the farthest reaches of our planet to start a new life, the 4Runner TRD Pro would be the vehicle I’d have my family hop in to get the hell out in a jiffy.