2020 Toyota Tacoma Is An Odd Yet Adorable Anomaly 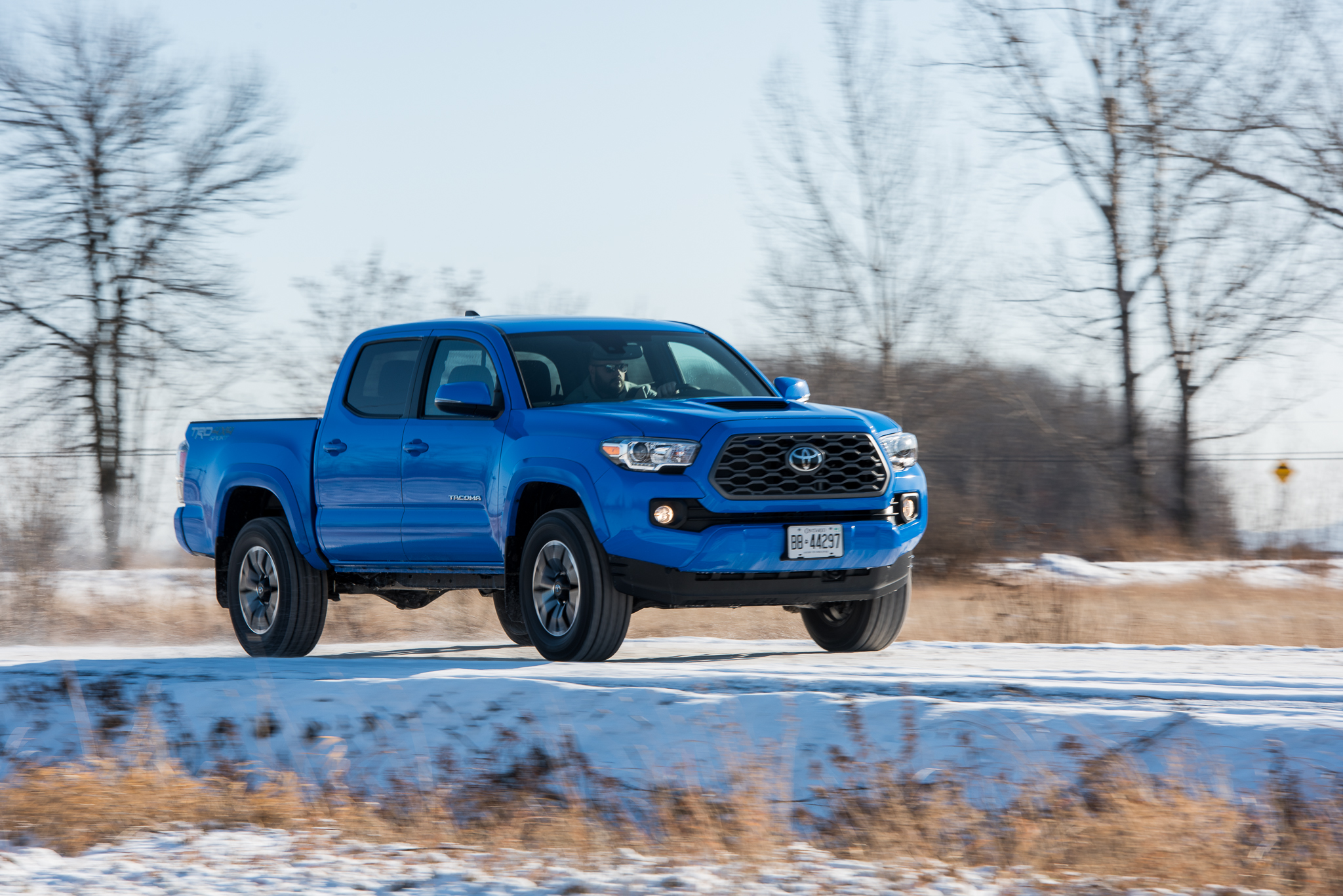 The 2020 Toyota Tacoma is a very interesting business case. Head over on Instagram, and chances are you’ll find a hashtag related to a #toyota truck. Ask anyone what their favorite small truck is, and they’ll most likely tell you it’s a Tacoma. And they probably don’t even know why. As I write this, it’s currently the best-selling midsizer in North America, outclassing its main rival, the Chevrolet Colorado by a solid margin.  Yet, it’s not exactly what many would call class-leading, now is it?

Curious to understand this strange and intriguing phenomenon, I took a 2020 Tacoma out for a spin. And since Toyota gave me the choice, I opted for a stick shift example. Surprised? 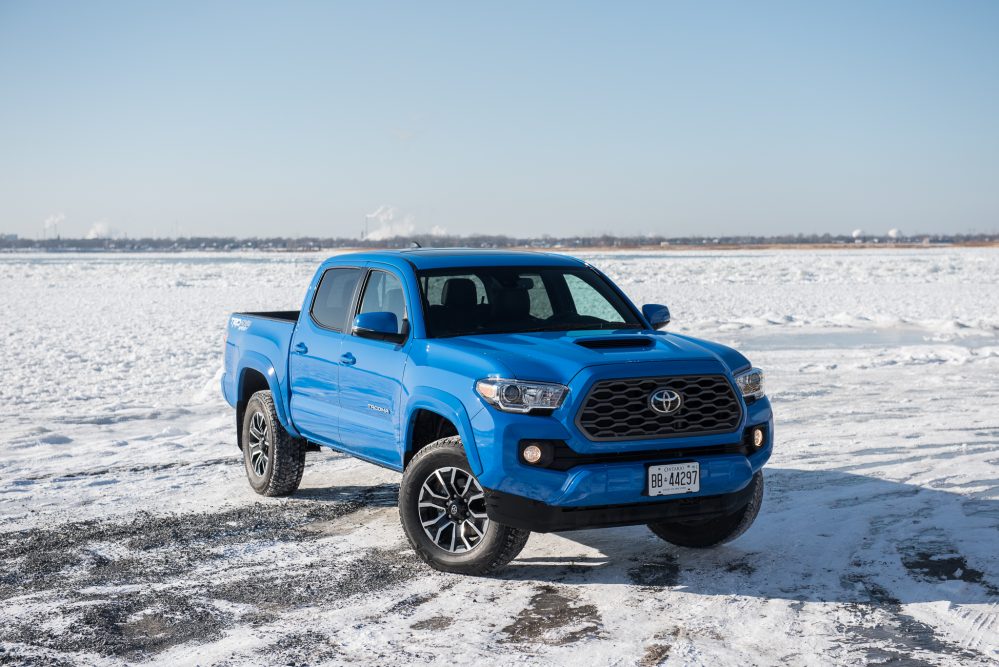 One thing the 2020 Toyota Tacoma has going for it is its looks. Even if it’s not dressed up in the rough and tough TRD Pro package, the Tacoma has the right kind of appearance. Proportions, even in short box Double Cab configuration, like my tester, are just right. It’s downright a cool looking truck. 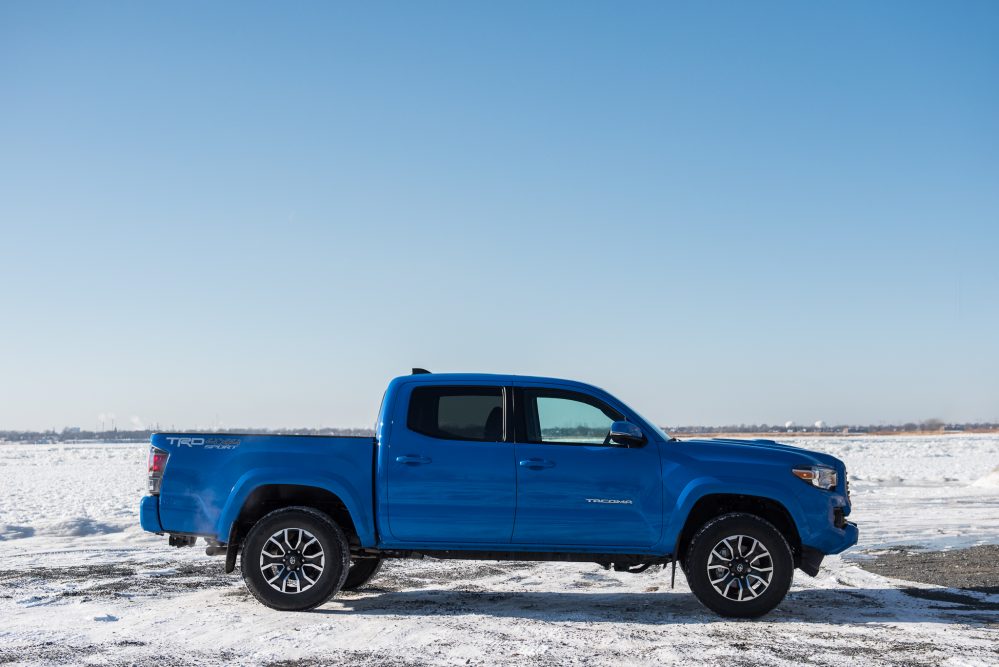 For 2020, Toyota applied a fair bit of updates to its best-seller, even if you can’t really notice them at first sight. The front fascia is actually all new, with a new grille design, a slightly altered bumper, a new set of headlights and the now standard hood scoop. Other changes include different wheel choices, new available colors and revised taillights. The truck now gets a power-adjustable driver’s seat, as well as a set of useful camera systems to remain in tune with the times. 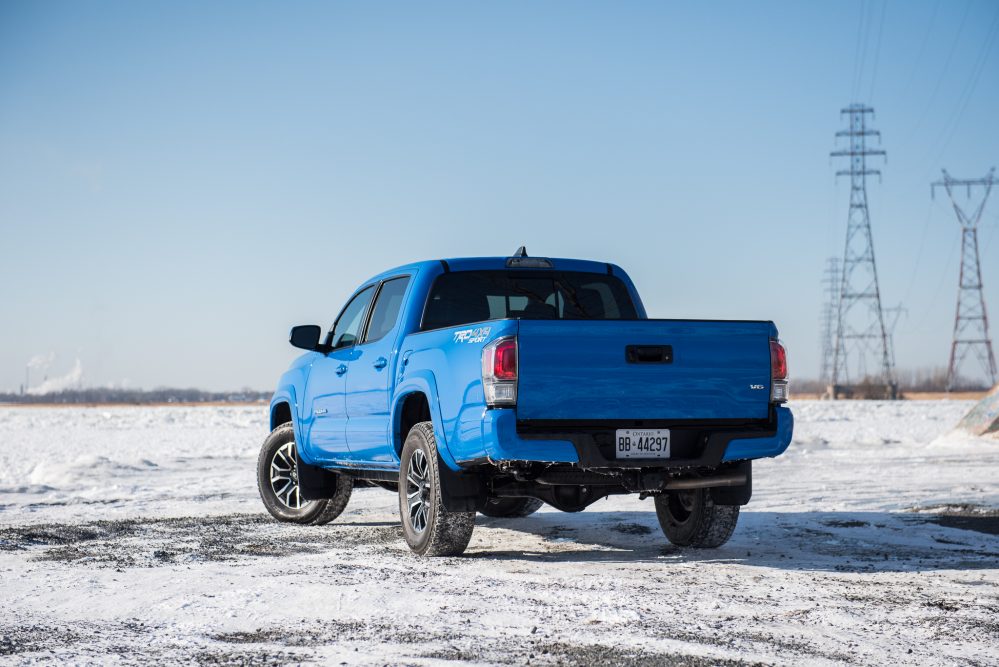 But the biggest and most noteworthy change is an upgraded infotainment interface with larger available screens, and the addition Apple CarPlay and Android Auto compatibility. Finally, the Tacoma gets what a Honda Civic has had as standard equipment for years. 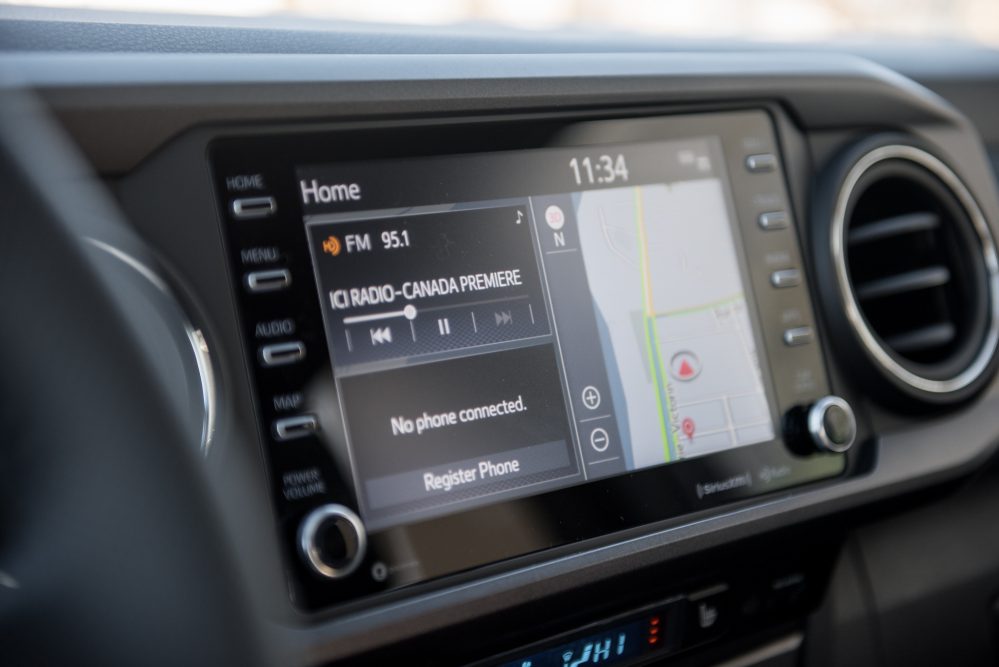 Everything underneath the body and frame remains unchanged, which is presumably why Tacoma owners love their trucks so much. While old, it’s a tried and proven formula that seems the be this truck’s magic sauce. Two engines used to be available, the base one being a 2.7-liter four-cylinder good for 159 horsepower and 180 lb-ft of torque. 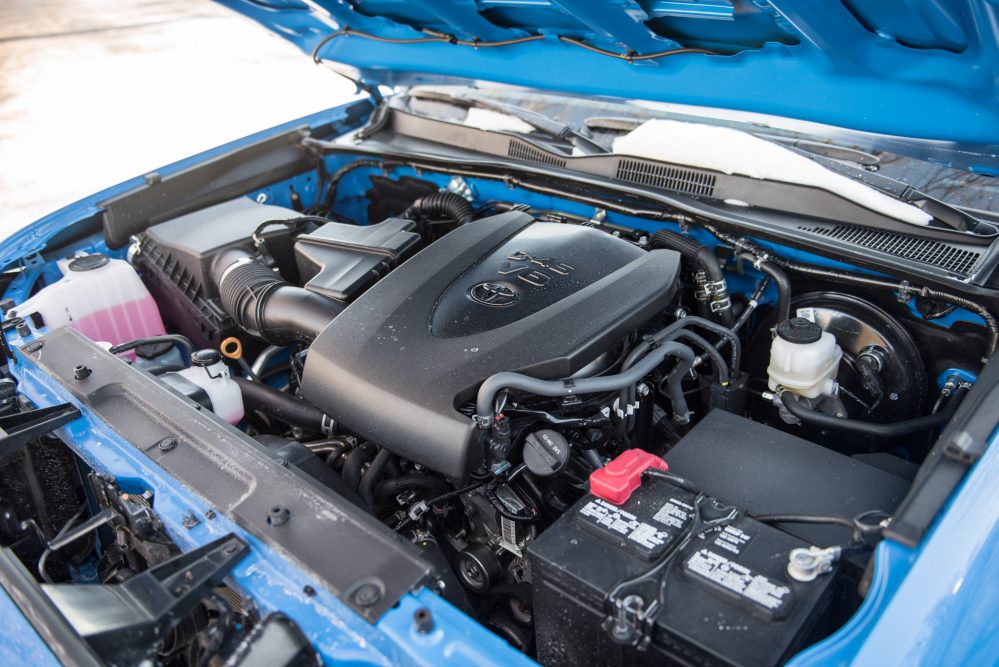 For 2020, however, that four-pot has been removed for the Canadian market, leaving Toyota’s ubiquitous 3.5-liter naturally aspirated V6 as the only choice. It cranks out 278 horsepower and 265 lb-ft of torque. It can be mated to either a six-speed manual, like the truck you see here, or a six-speed automatic. Tacomas can also come with rear-wheel-drive, but because this is Canada, my test unit powered all four wheels. 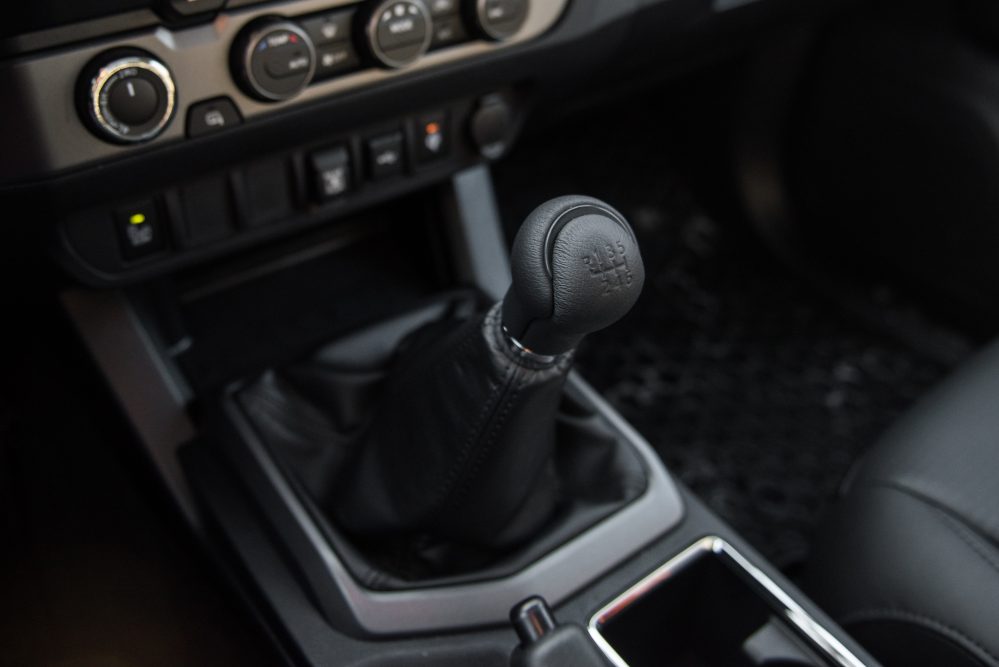 Opting for the manual gearbox and the Double Cab format instantly equips your Tacoma with the TRD Sport package. It’s essentially the most equipped trim level before shifting over to TRD Pro territory. 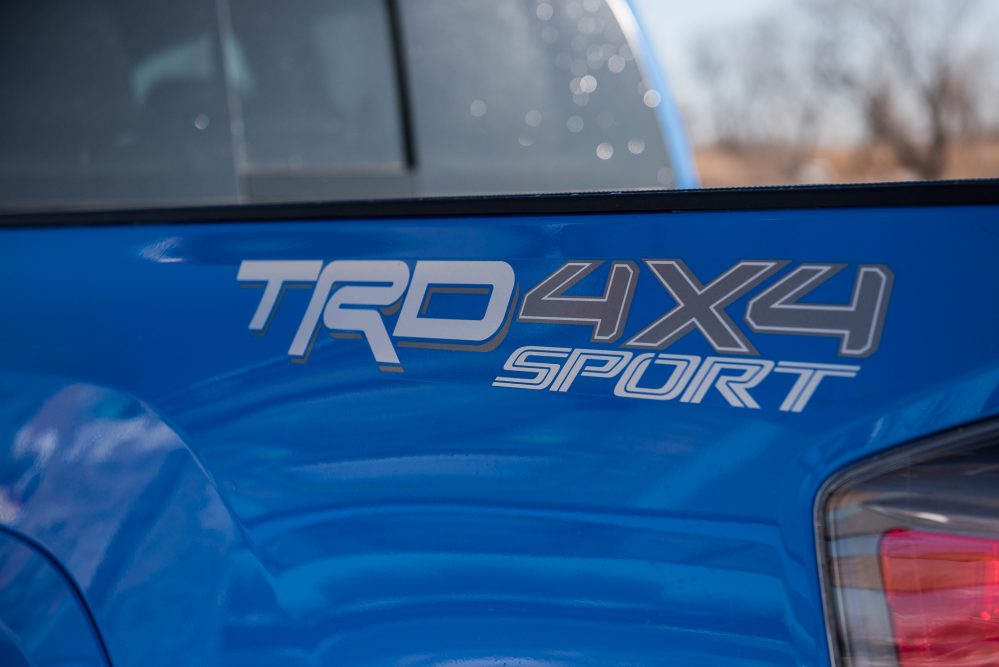 The package includes a full plethora of neat toys like a power sunroof, heated mirrors, wireless phone charging, an upgraded sound system, blind spot monitoring and TRD Sport lettering. Total price for the truck you see on these pictures, with the now free of cost Voodoo Blue paint job, is $46,696.

Not Winning At Anything 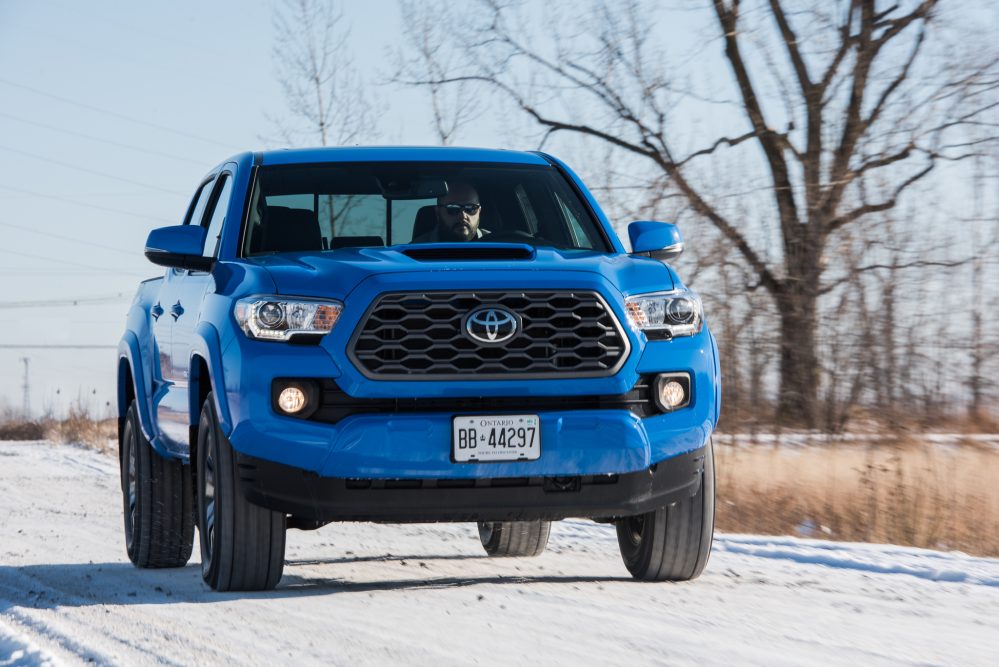 So let’s get back to me saying the Tacoma isn’t competitive. Back when it was alone in its segment, Toyota kind of had a fresh sheet of paper to do what the hell it wanted with its little truck. For a while, its only main competitor was the Nissan Frontier. Then, the Honda Ridgeline came alone. While capable, the weird little Honda still didn’t beat the Tacoma’s 6,800-pound towing rating (6,500 pounds with 4WD). So Toyota was fine. 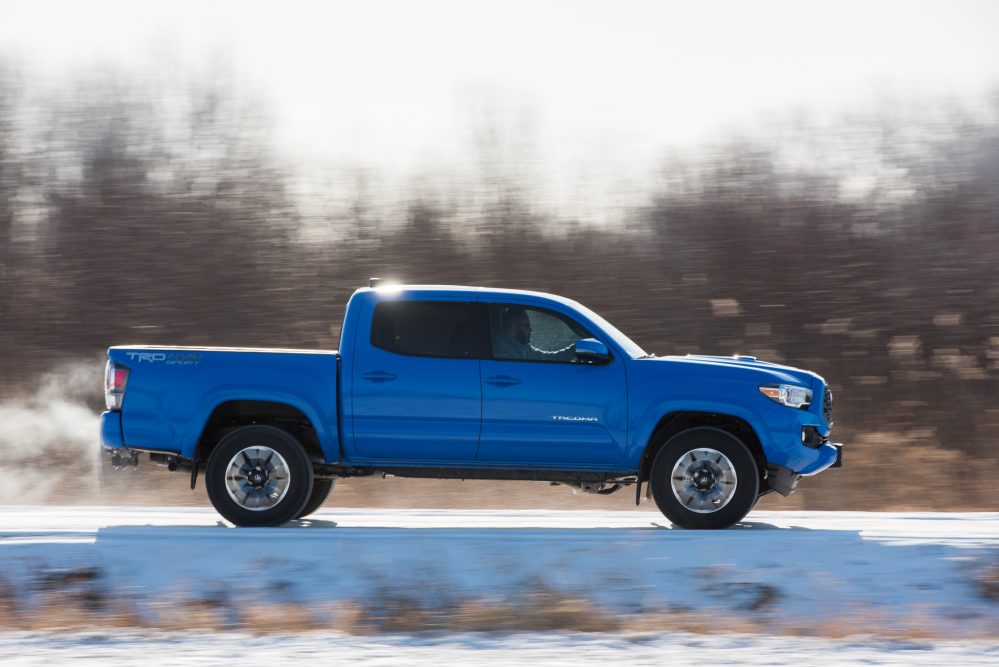 But suddenly, the entire industry woke up and realized midsize trucks were cool again, so the Tacoma ended up facing solid rivals. For starters, the Chevrolet Colorado / GMC Canyon V6 brothers come out of the box with a towing advantage over the Tacoma (7,000 pounds).  They also both offer a diesel option which cranks thinks up to a whopping 7,700 pounds. Ford then decided to bring back the Ranger, and while I still haven’t driven that one, it’ll do 7,500 pounds with a four-cylinder turbo under the hood. 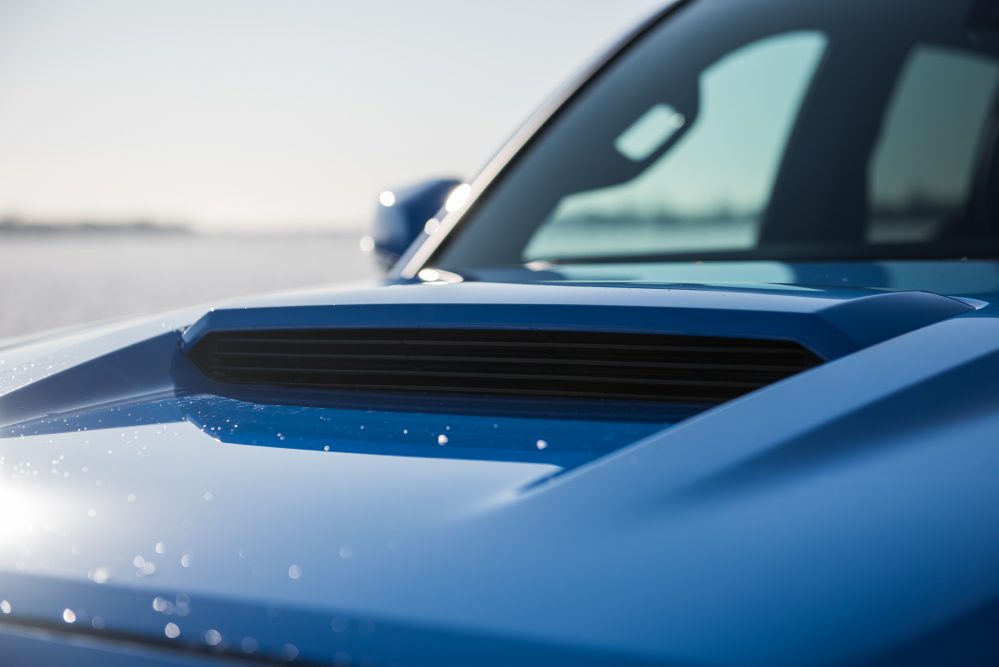 And this year, Jeep commercialized a rather solid Gladiator. Not only will it pull up to 7,650 pounds with a gasoline V6, it will soon also offer a diesel engine. It’s also a convertible, which is rather cool, and it too can be had with a six-speed manual gearbox. Suddenly, the little Tacoma is seriously outnumbered. 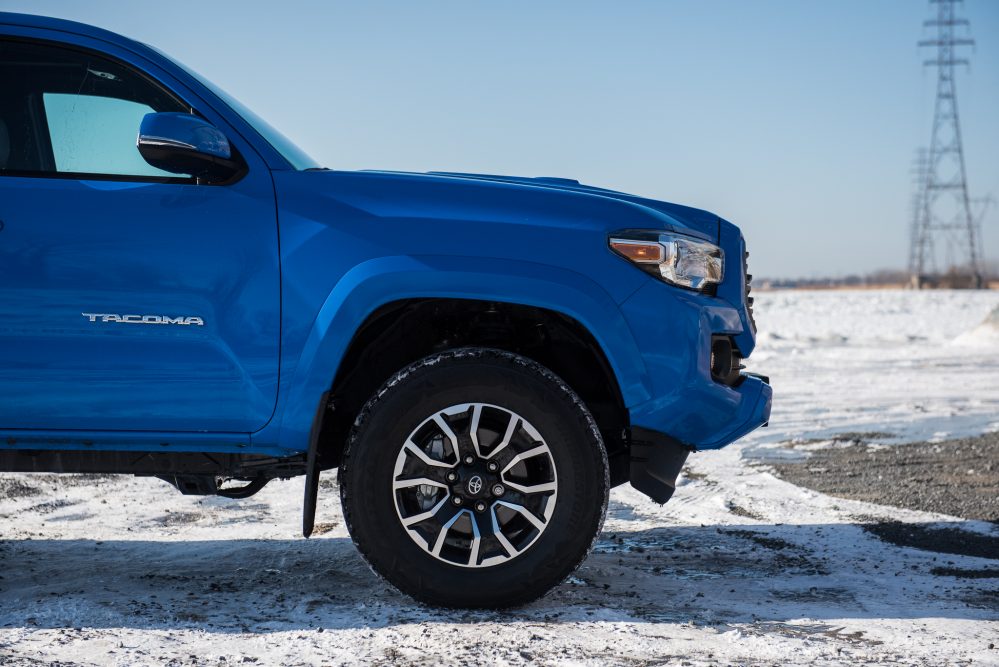 Still, I figured it must win at something, considering Toyota has shuffled more than 240,000 of them on our continent alone in 2019. So I took my adorable little truck out for a spin in a quest to find it some qualities.

The first thing you notice when you climb inside a Tacoma is how high the floor is. This means if you’re a little too tall, like me, you need to climb and then crouch to get it. It’s the most awkward way to get inside a vehicle I’ve ever witnessed. Then, there’s the way you sit inside. Considering how high the truck’s cabin is, your knees end up hugging your forehead. Urgh. At least, I can adjust the steering wheel to feel more comfortable, right? 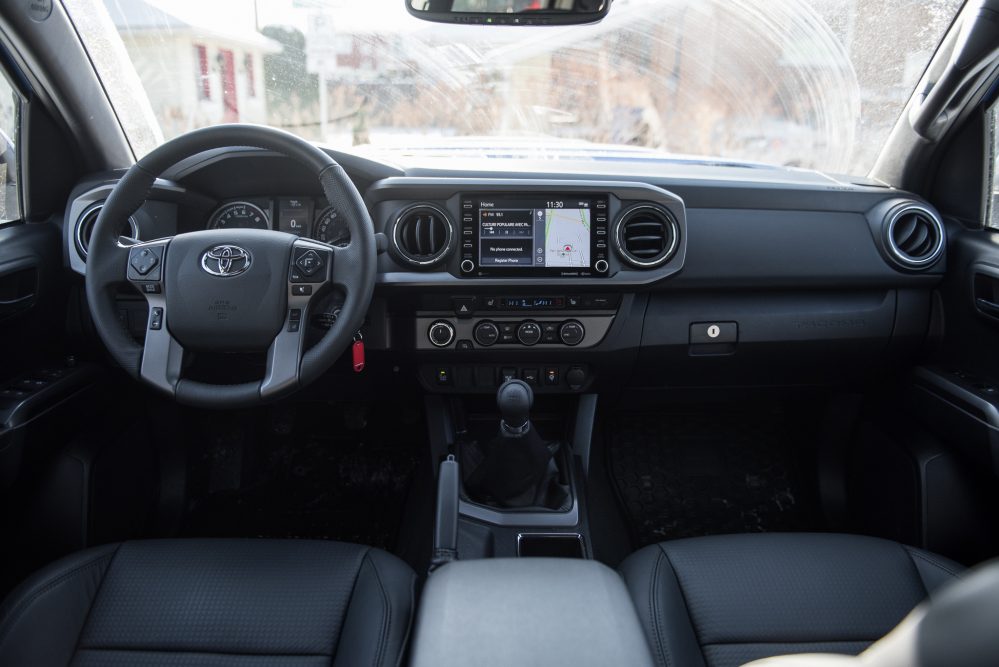 Not exactly. While the Tacoma’s steering adjusts in height, it’s not telescopic, which means it’s rather hard to find an adequate seating position. Add to that rock-hard seats and a strangely tight back seat, and you end up with a truck that’s not really enjoyable to spend a lot of time in. Oh, and fuel economy isn’t too good either. I could barely keep this thing under 14L/100 km, which is rather awful. 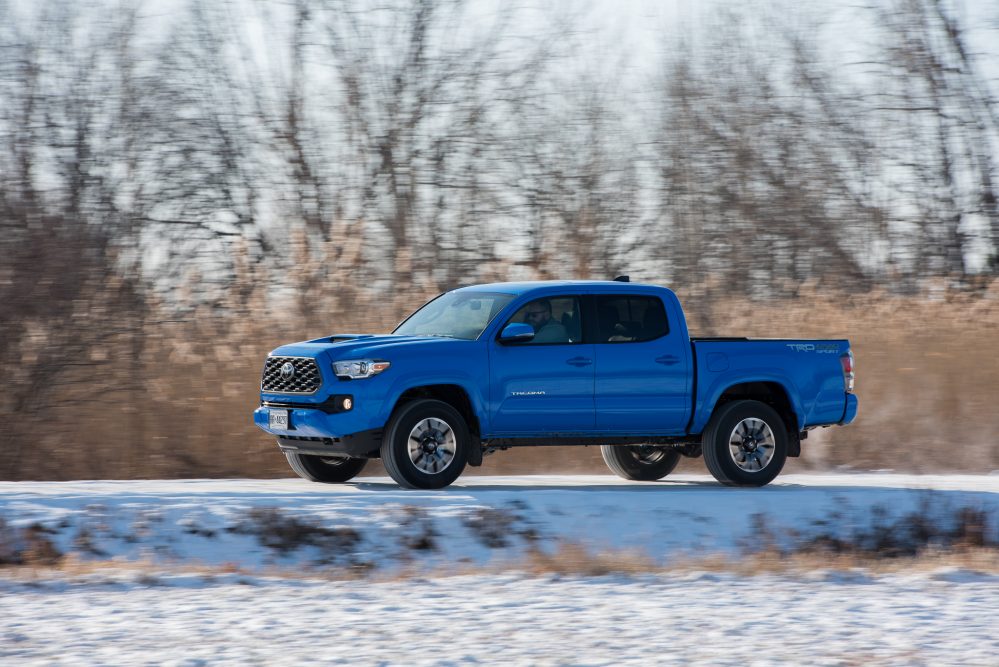 There is, however, a tiny bit of hope. I will say the 3.5-liter V6 is a gem. Not only does it provide ample acceleration, it sounds quite good, puts down a sufficient amount of low-end torque and loves to rev. Meanwhile, the manual gear lever is sloppy – as is typical of any truck – but clutch takeup is crisp and smooth, allowing you to wring out the great engine to your liking. 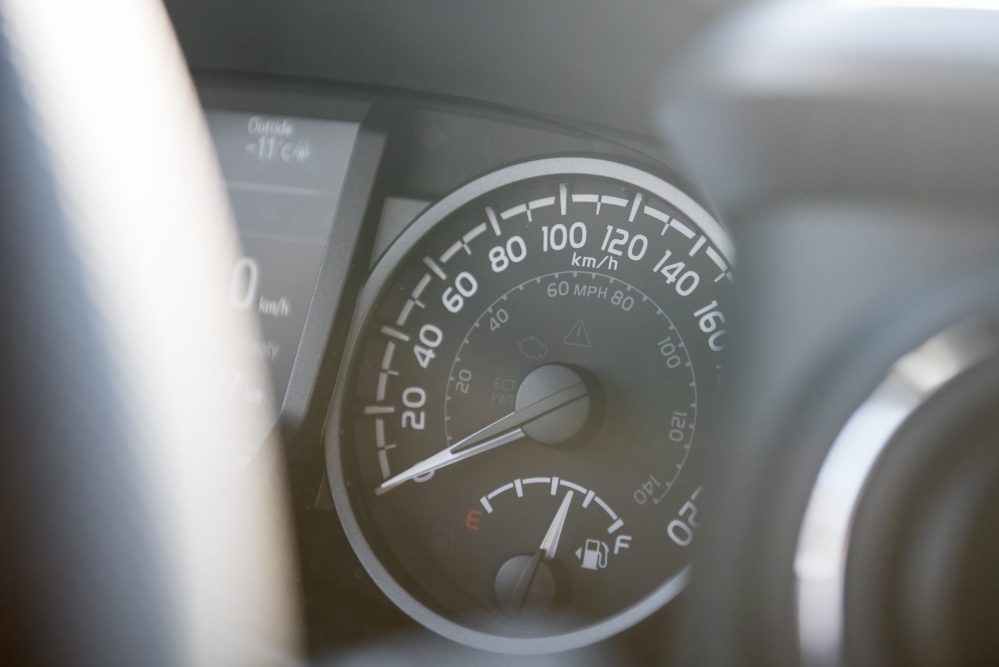 I was also pleased with the Tacoma’s new and updated infotainment interface. What used to be a disaster in ergonomics has been simplified and sped up through a straight forward and easy to grasp interface that reacts quickly to your commands. Android Auto / Apple CarPlay compatibility are of course welcome features, and so are the large, easy to grab knobs and buttons scattered around the dashboard. While not the most exciting layout to look at, the Tacoma’s interior is at least functional and well suited to people who spend a lot of time in the woods.

At this point you’re probably thinking: “wow, he actually hates the 2020 Toyota Tacoma, how can that be?” 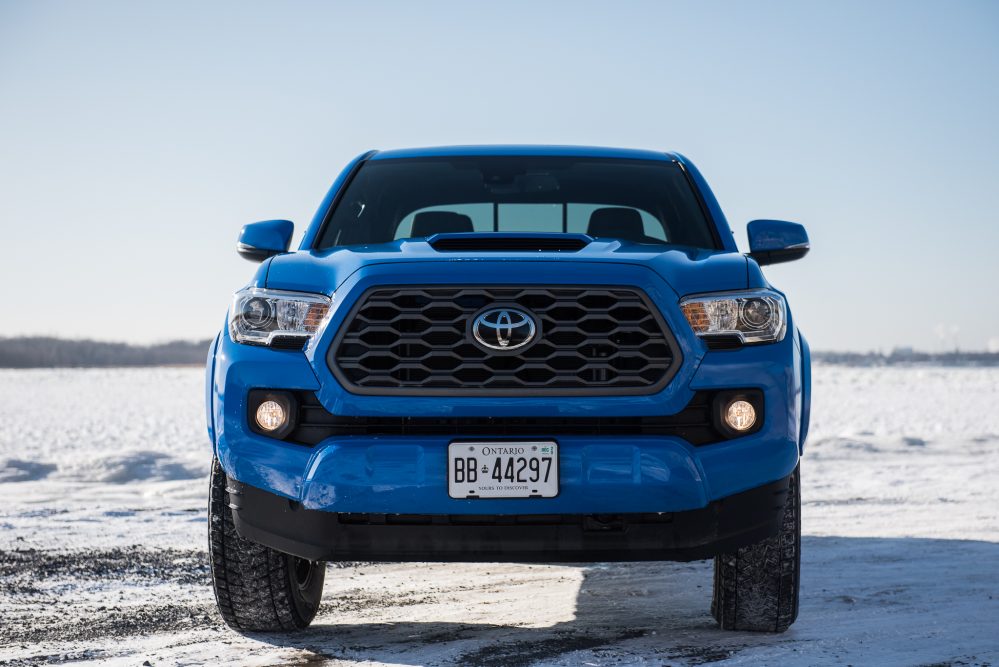 I don’t hate this truck, actually. It’s just deeply flawed. When I got out of it, I told myself that I’d be much better off with a Colorado or even a Ridgeline. Yes, a fuckin’ Ridgeline. But then, I turned around and looked at it, and for some odd reason, I couldn’t help but adore it. I contemplated on Marty McFly’s example in Back to the Future. How rock-solid they are (let’s not mention the rusting frames too loud), and how much I could sell one of these bad boys on the second-hand market. Suddenly, I needed one in my driveway, even if it made no sense at all. 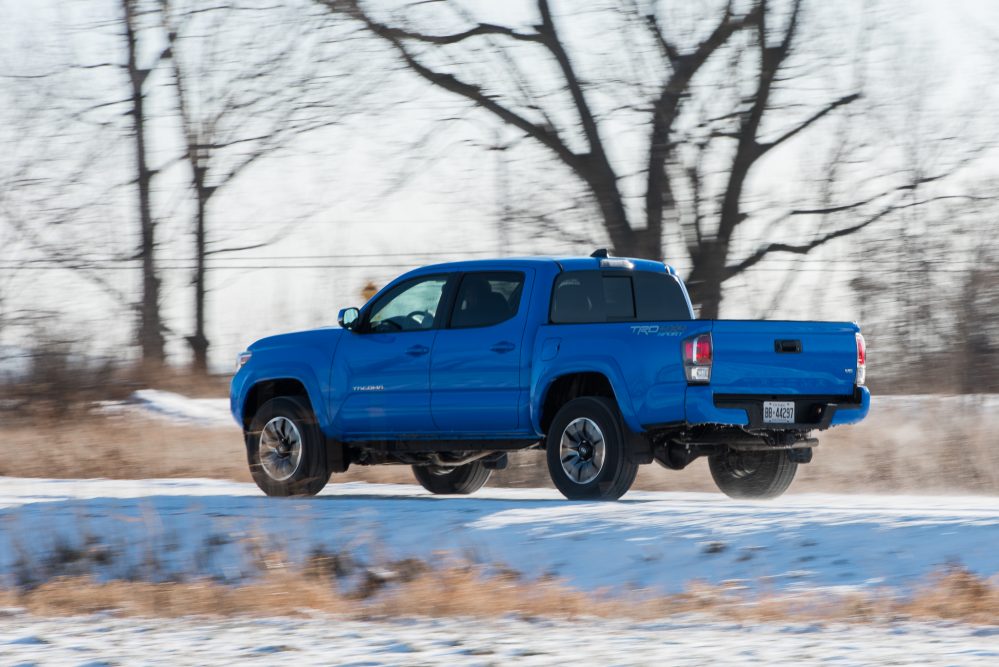 That’s what Toyota has understood better than the entire segment. It doesn’t matter if your truck can’t pull a trailer filled with cows or will cost you a shitload in gas bills. What counts is that it’s cool and desirable. No other midsize truck does this better than the 2020 Toyota Tacoma.

Review of the 2020 Toyota Tacoma by William Clavey
Midsize Trucks