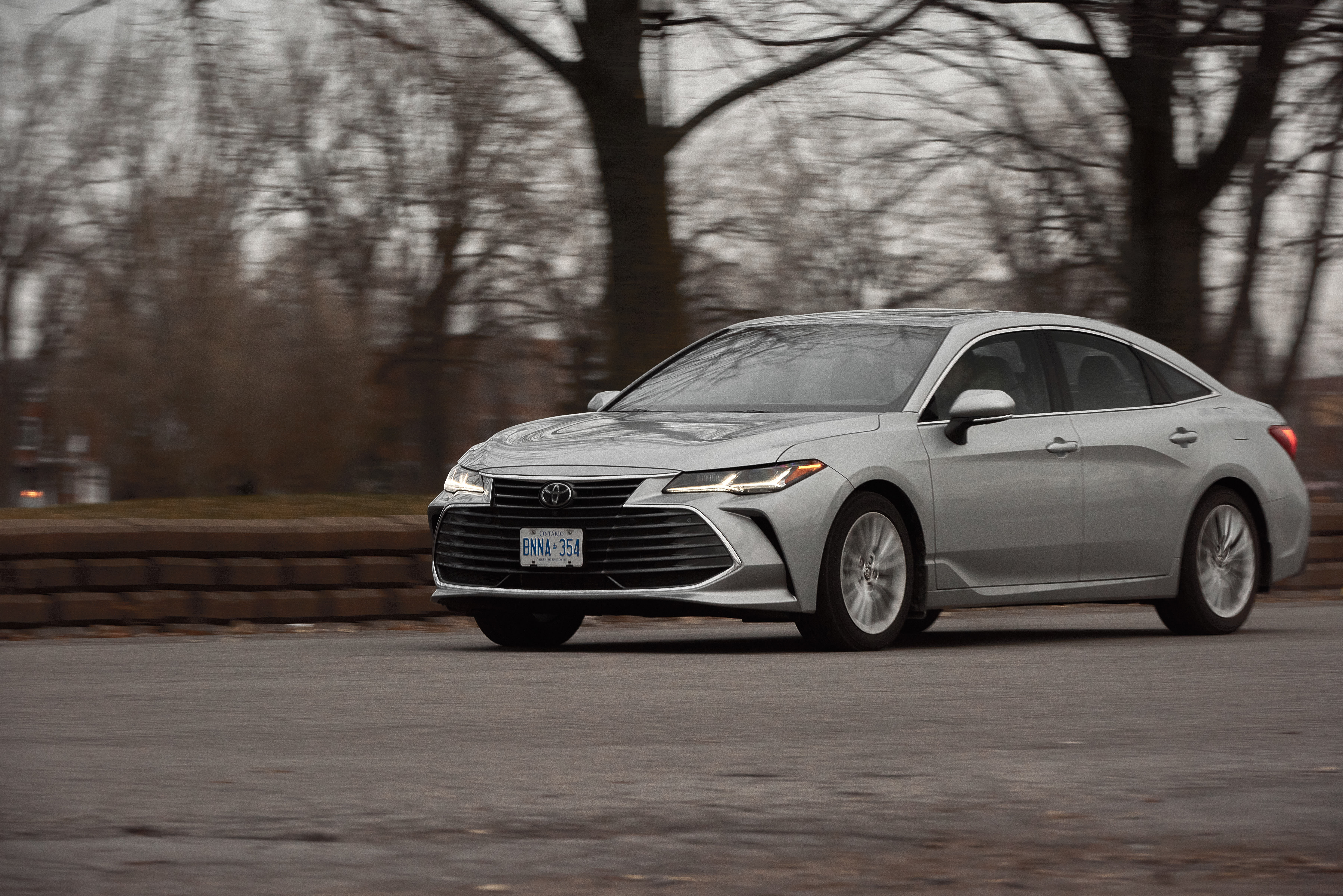 The 2021 Toyota Avalon gets all-wheel drive for the first time in its existence. But it also gets it at a time when consumers couldn’t care less about full-size sedans. While this is arguably the best interpretation of the thing, it more than ever makes you wonder why you shouldn’t just get a Toyota Camry instead. 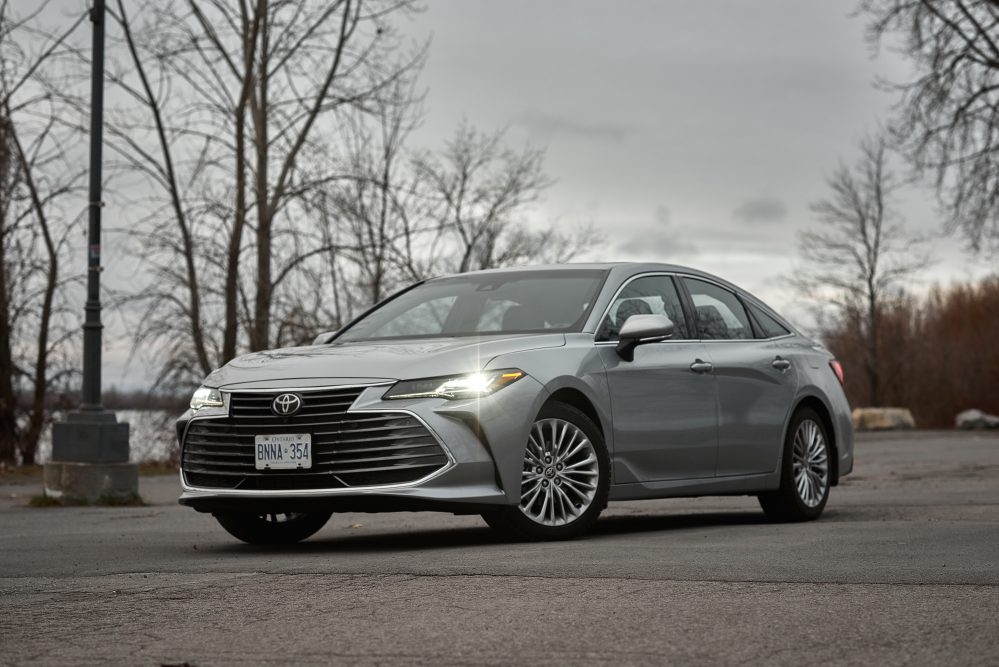 When Toyota redesigned the Avalon for its fifth generation in 2019, I remember thinking “but where’s the car’s actual front end?”. Through its efforts of selling “no more boring cars”, Toyota turned the humble Avalon into a big-mouth whale-resembling monster. That grille, well it takes up the entire car’s front fascia. 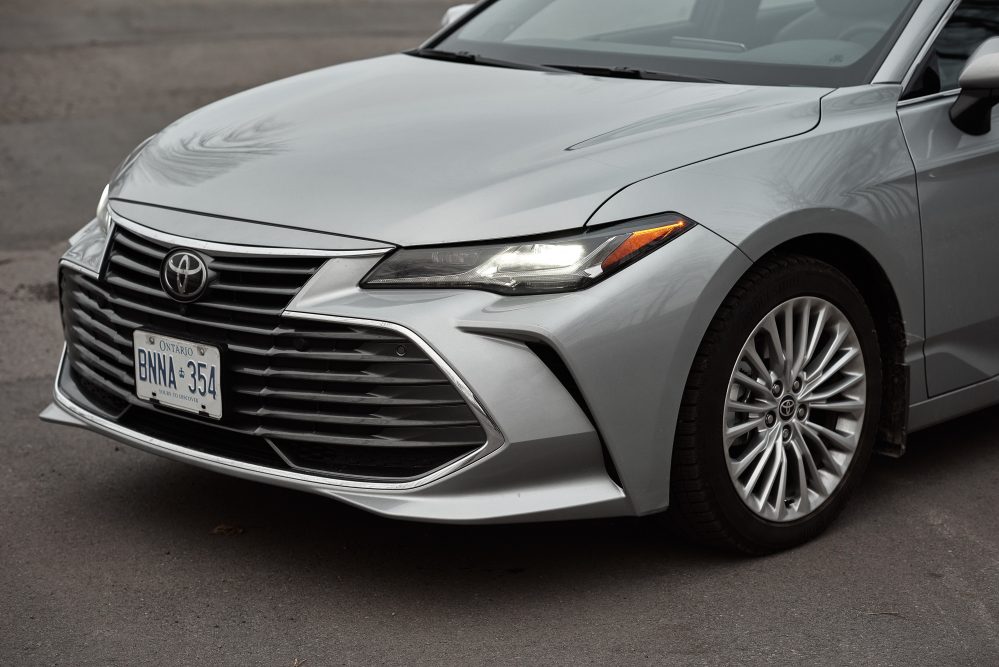 Anyway, it’s not like the 2021 Toyota Avalon has many competitors in the first place. Except for perhaps the Nissan Maxima and the Chrysler 300, large sedans are now pretty much dead here in North Amerca, which means Toyota can pretty much do what it wants at this point.

The year 2021 marks the arrival of all-wheel drive, yes, but also of minor lineup revisions here and there. The default engine for the all front-driven Avalon remains Toyota’s tried and proven 3.5-liter V6 good for 301 horsepower and 267 lb-ft of torque. It’s mated to an eight-speed automatic gearbox. 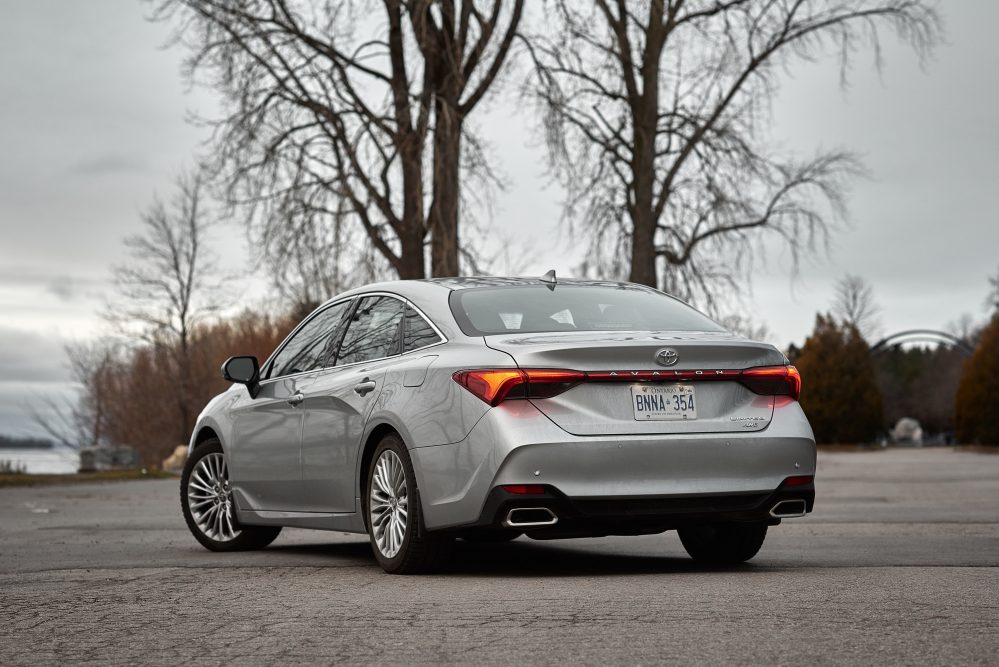 Unfortunately, if you’re interested in four-wheel locomotion, you need to drop the V6 and settle for a 2.5-liter four-cylinder good for a much-less engaging 205 horsepower and 186 lb-ft of torque. That engine gets the same eight-speed as the V6. 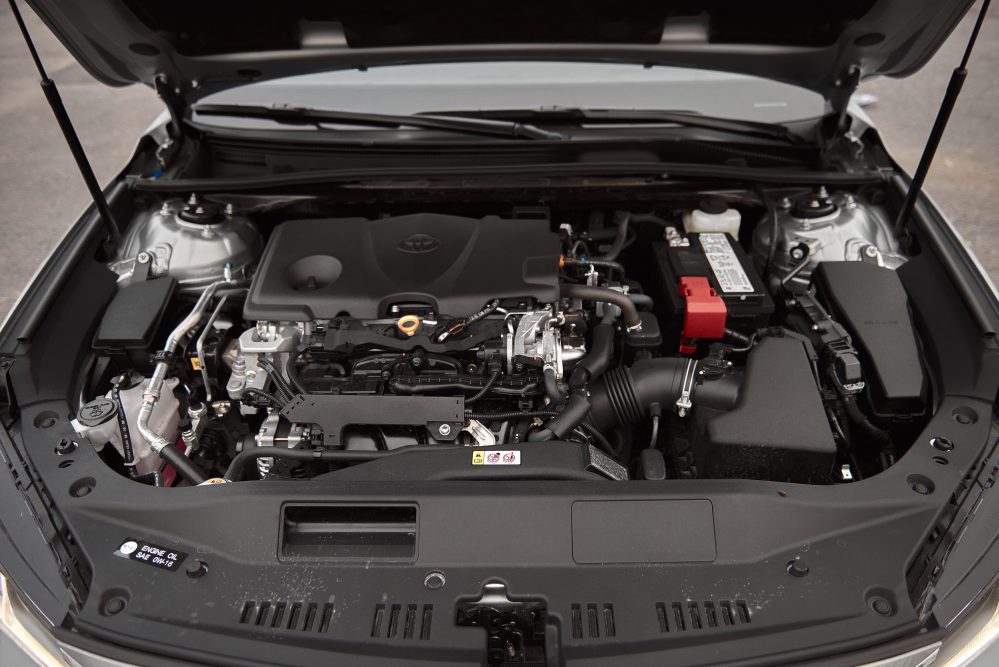 Another very odd decision from Toyota is that the all-wheel drive option is only available on the top-shelf Limited trim level, which kicks off $6,000 higher than the $45,619 XSE V6. I mean, sure, at that price, you’re  getting a fully loaded care with barely no options left to tick off, except for two $255 optional paint jobs; Ruby Flare Pearl and Wind Chill Pearl. The Celestial Silver paint you see here was a no cost option. But it’s still 50 grand for Christ’s sake. 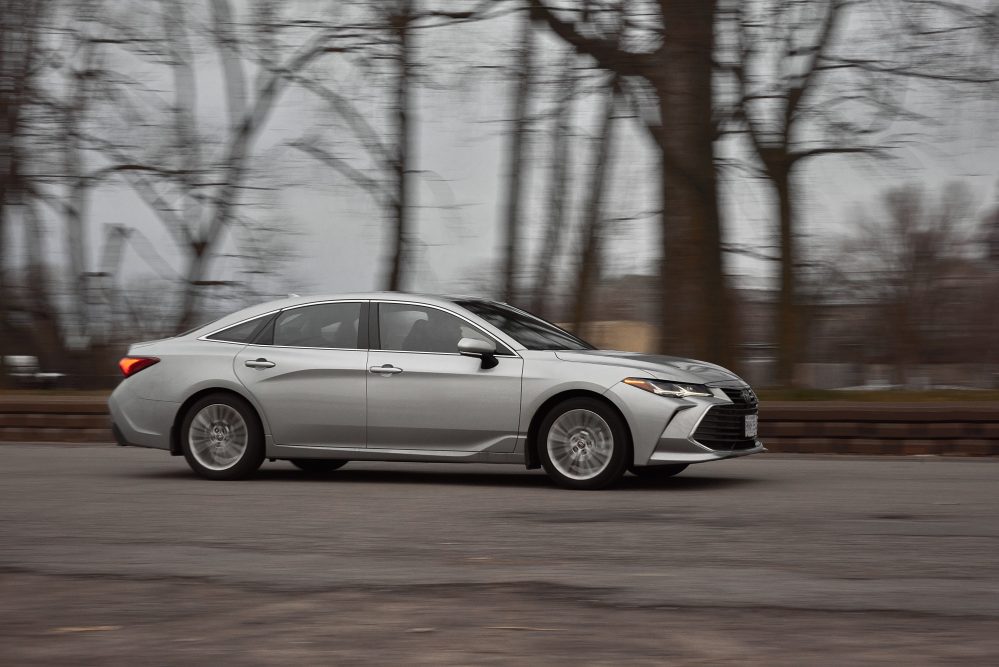 With a really good Camry and an equally excellent Lexus ES on sale, it’s become even more difficult to justify the Avalon’s existence. What’s more, it rides on the exact same platform as the two cars I just mentioned – Toyota’s TNGA-K architecture – which means they’re all essentially the same car. 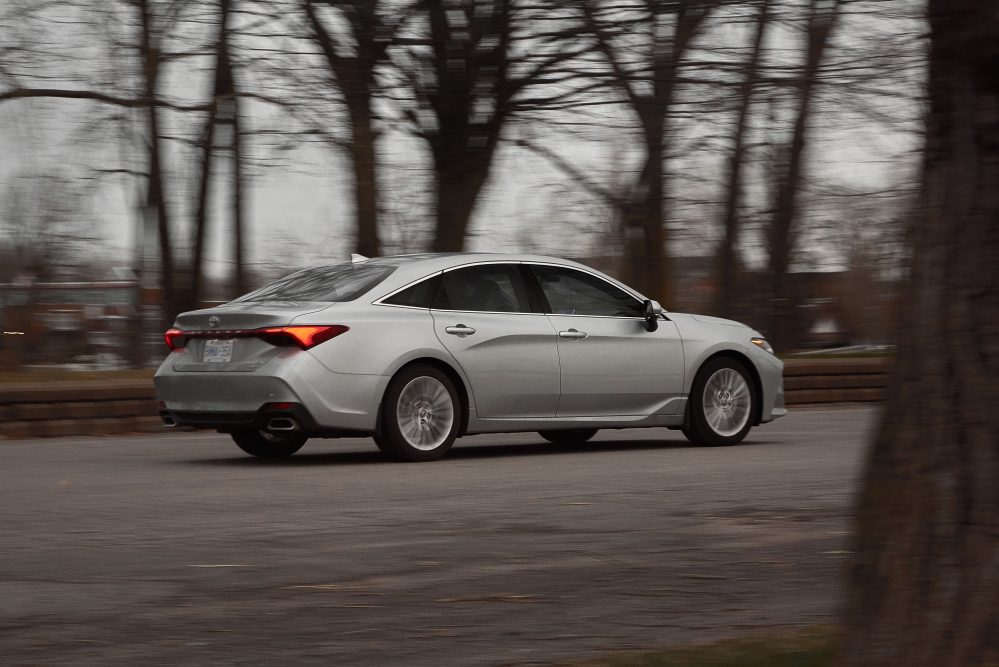 The 2021 Toyota Avalon is a fine sedan. It rides smooth, is built like a rock and simply makes you feel good about being a human being. Cabin sound deadening is excellent, while overall cabin visibility is fine for daily driving. The Avalon will gracefully carry itself through a set of windy country back roads, but it’s no canyon-carving sport sedan. It’s all well mannered and grown up. The platform is solid, but the suspension is plush. All of the car’s components feel beautifully connected to one another. 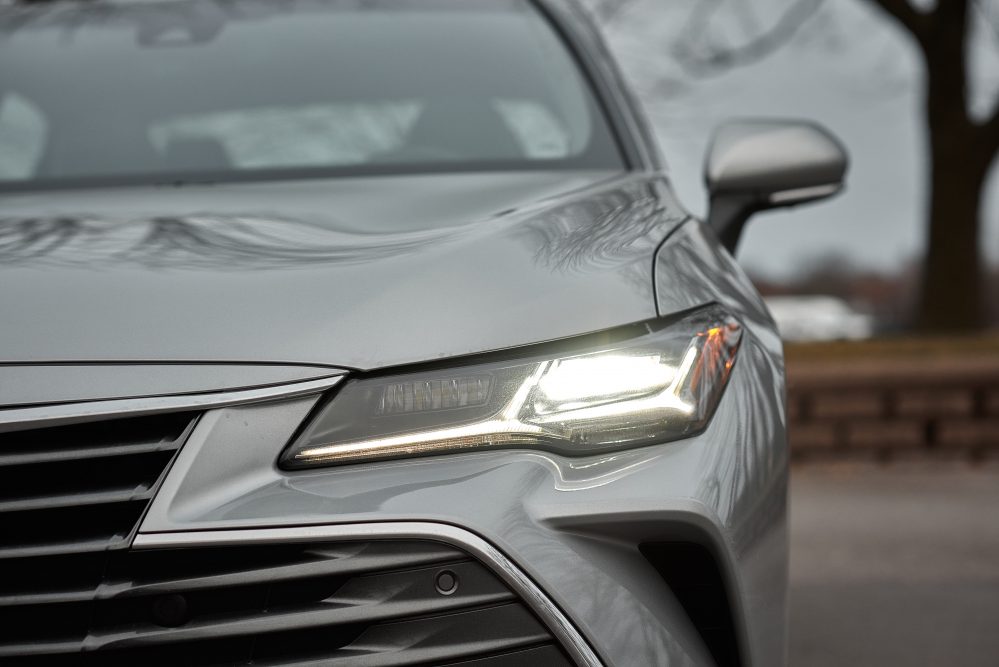 Where the Avalon disappoints is in its four-cylinder, all-wheel drive offering. Saying this car is underpowered would be an understatement. In this specification, the Avalon is almost 200 pounds heavier than an already slow Camry AWD. Add to that a transmission that, while yes, responds quickly when asked to, constantly hunts for gears the moment you need more juice for overtaking or climbing steep inclines. The only way to get anything out of this big girl is by thrashing the throttle pedal to the confines of its firewall. The result is a constantly annoying drone from the engine compartment and not much actual speed. 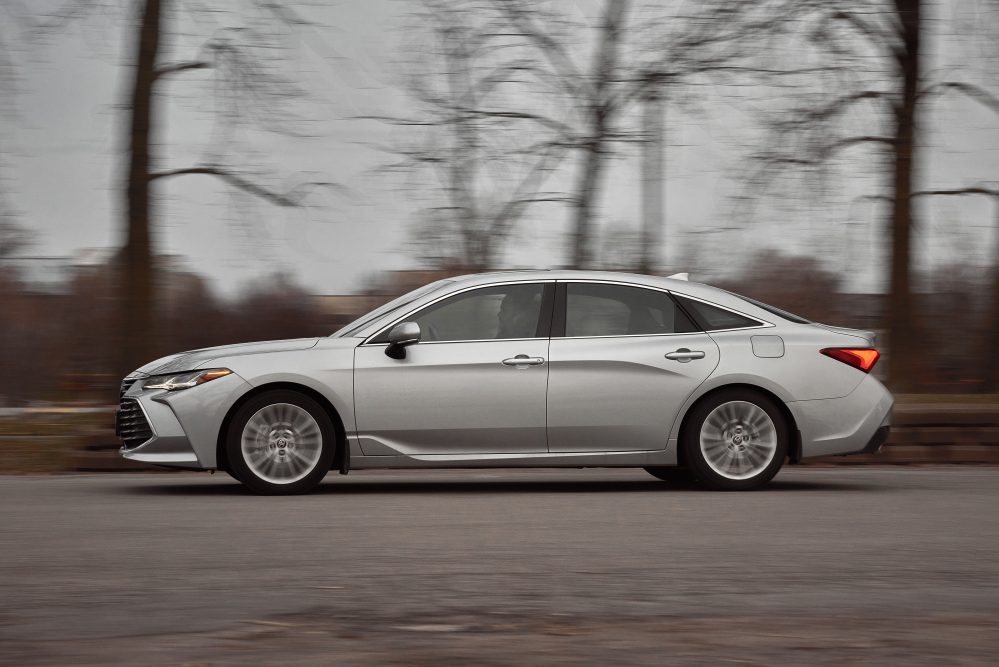 In other words, the Toyota Avalon needs its V6. Remove it, and it feels like Toyota has simply given up. The only reason anyone would want to buy an Avalon over a Camry, a Lexus ES or anything else on sale in this price range, is because they also want six-cylinder power. 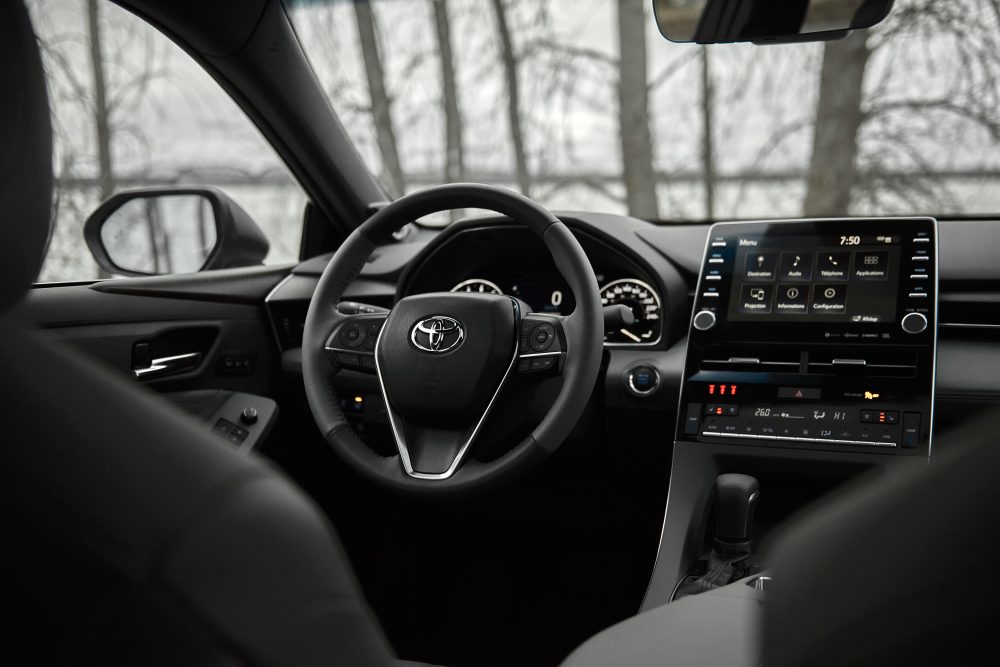 That all being said, none of what I just wrote prevents the Avalon from being a fantastic automobile. If your priority is having a car. A good car. A car that’ll run forever with minimal maintenance and that will always comfortably carry you and your family to your next destinations, then you’ll be well served here. Like in all Toyota products, there’s a sense of craftsmanship that oozes out of the Avalon, one that makes you want to continue owning the product for years on end. Fuel economy is decent too, I managed to average 7.8L/100 km. So at least, the four-cylinder has that going for it. 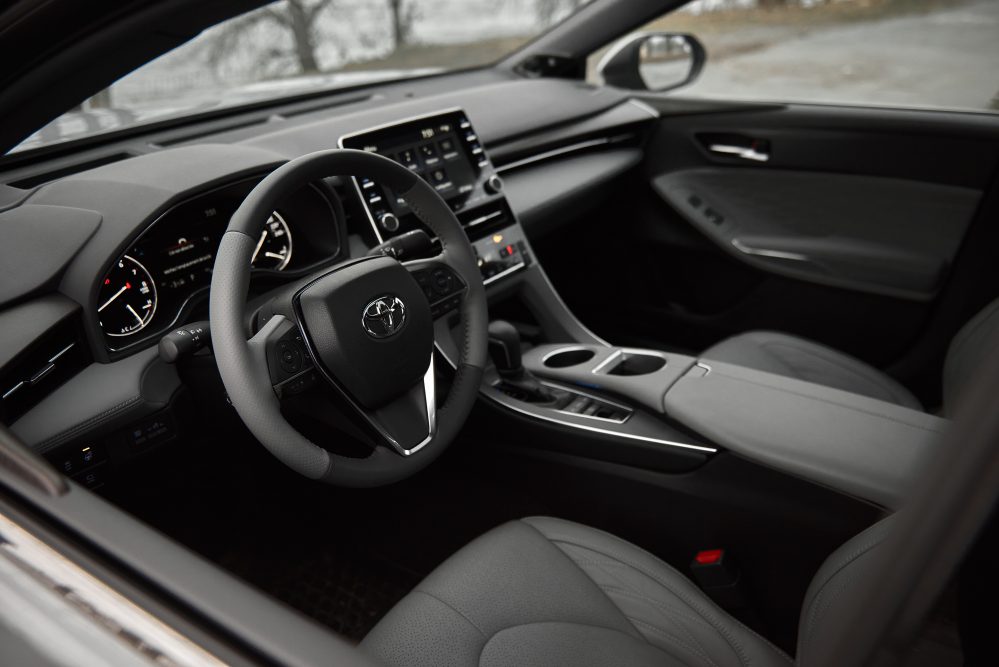 The Avalon gets a unique and rather intriguing dashboard layout. It’s dominated by the infotainment system that protudes from a long slab that originates from the center console. It’s all very striking and modern. Overall ergonomics are good in the Avalon, and contrary to some of Toyota’s complicated systems, its infotainment setup is easy to grasp and operate. 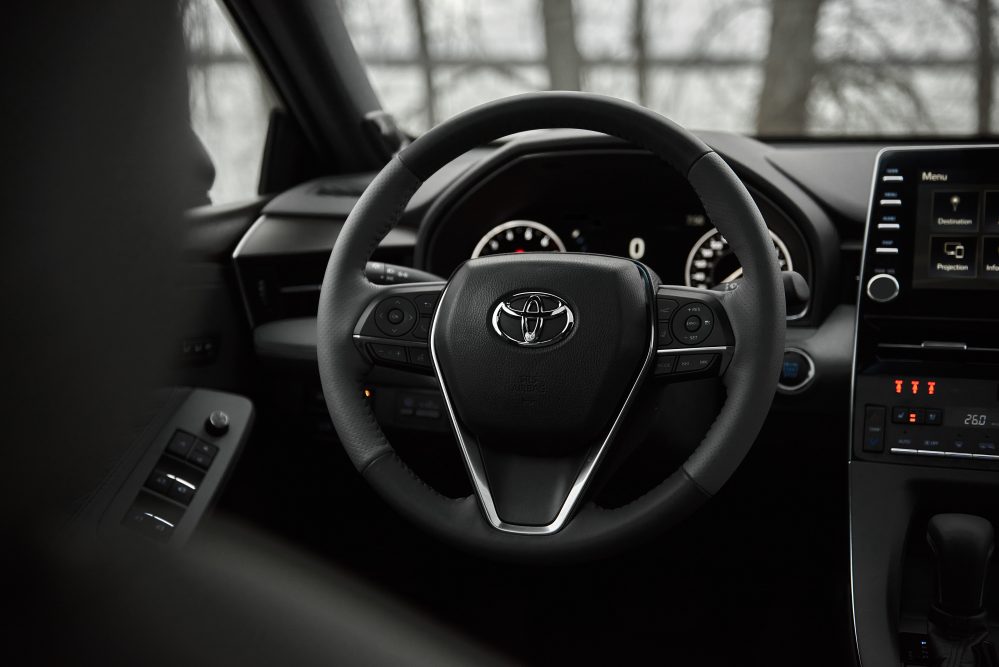 It’s an ageing system, yes, but one that works thanks to its large physical buttons and simplistic menus. Oh, and how do you find that grey on grey interior by the way? I know, it’s a lot of grey to take in, but it’s also rather well integrated. That two-tone steering wheel is a particularly interesting touch. 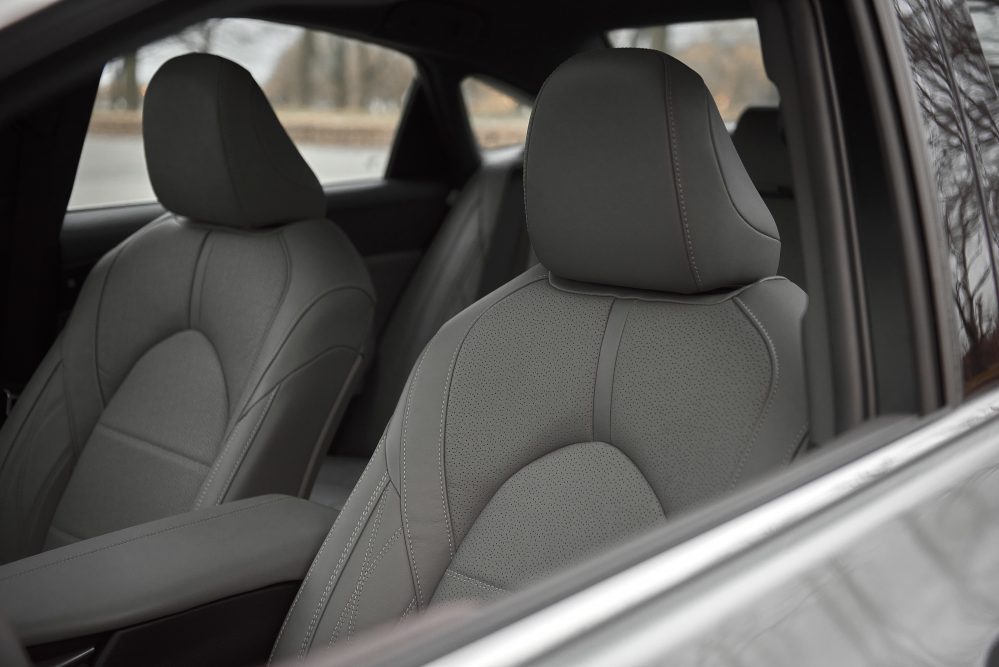 The Avalon’s seats are plush, but also offer the right amount of support for long journeys. Rear passengers will also find plenty of leg and headroom, while the trunk will engulf up to 456 liters of cargo versus the Camry’s 428 liters. It’s obvious, through the intricate details Toyota has added to the Avalon’s cabin, that this car appeals to a completely different kind of person than a Camry driver. 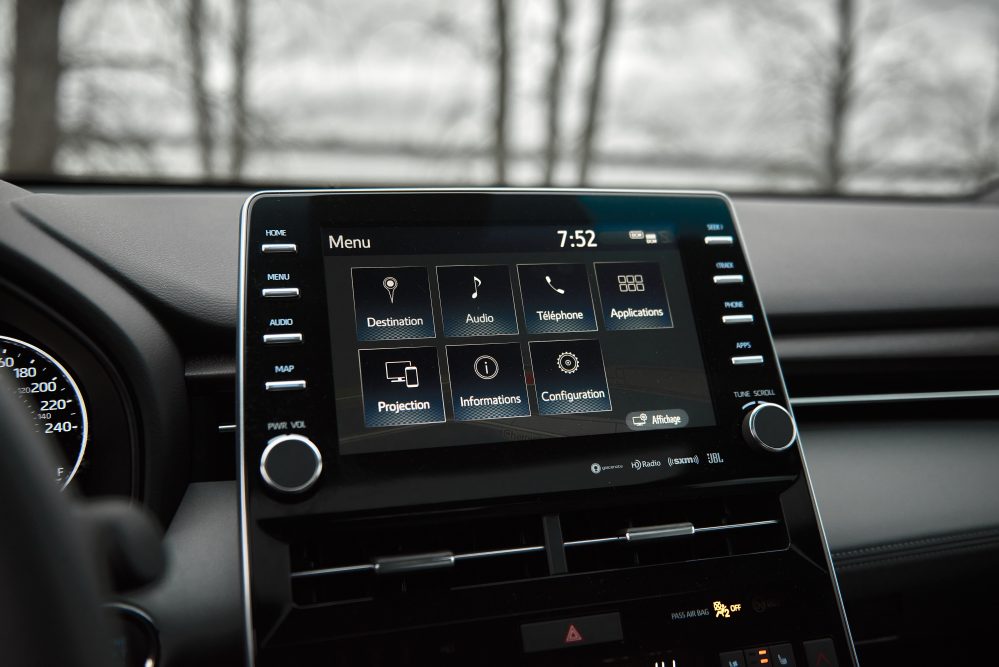 But here’s the cold, hard truth. A fully loaded Camry XLE AWD sells for almost ten grand less than this, offers as many creature comforts, the exact same drivetrain and benefits from a 165-lb reduction in its overall curb weight. 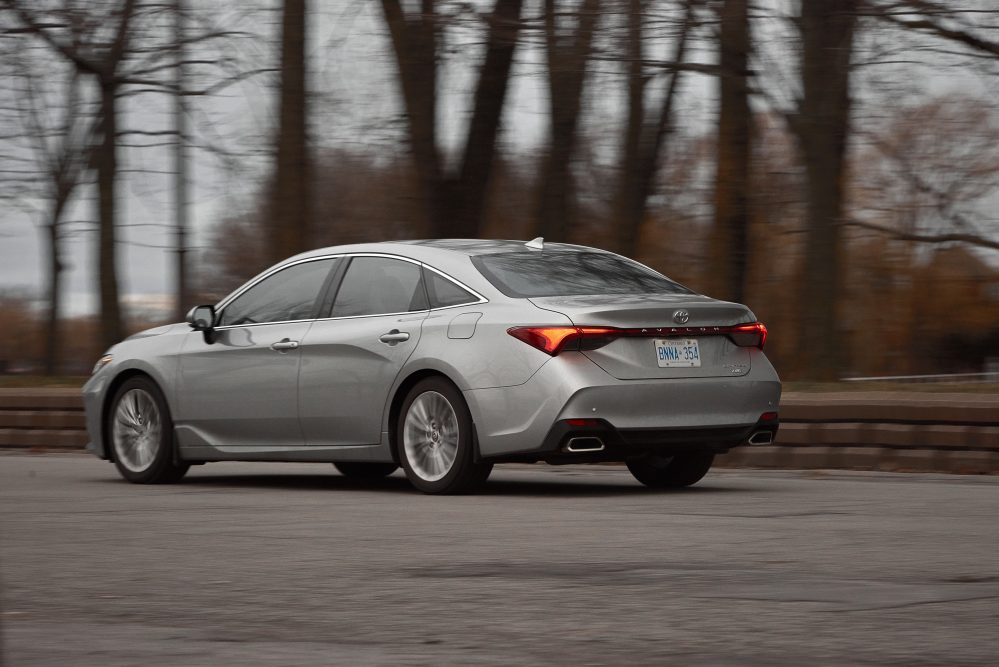 Perhaps, what’s worst, is that the $47,840 Lexus ES 250 AWD; a car that looks, feels and drives considerably more upscale then this for less money, exists. Then again, that has always been the Avalon’s struggle. It was squeezed somewhere between a Camry and a Lexus, yet, it didn’t prevent Toyota from selling more than 20,000 of them in 2020; a year plagued with a global pandemic and a social dependence on crossovers. If you don’t mind dishing out the extra cash, then the 2021 Toyota Avalon will undoubtedly serve you well.