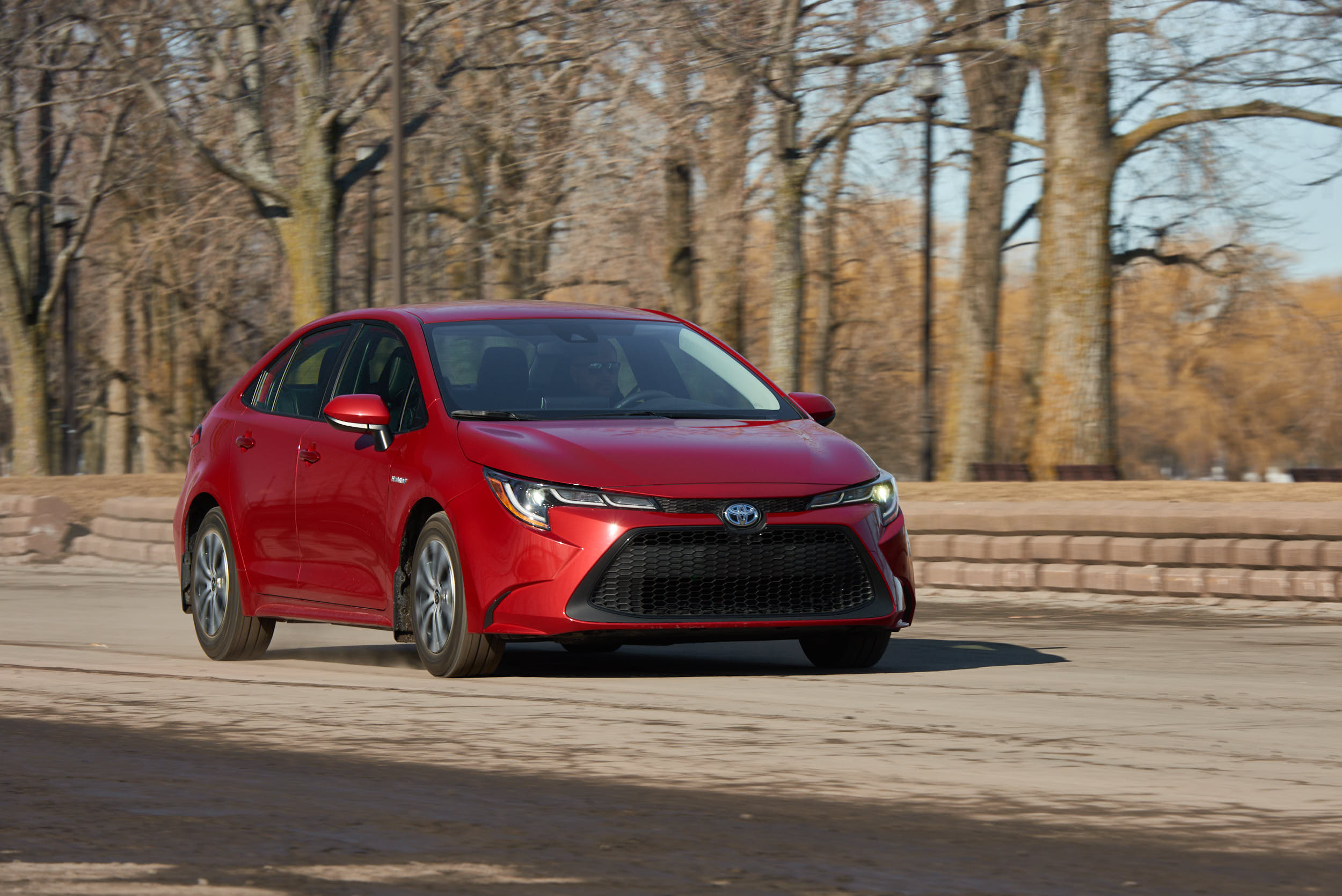 I know, the 2021 Toyota Corolla hybrid isn’t an exciting car, which is why you’re probably wondering why I’m talking to you about it. The thing is, at the end of the day, we need cheap, reliable and sensible transportation. And in that respect, it’s darn almost impossible to argue against the Corolla hybrid’s value proposition.

Cheap To Buy, Cheap To Run 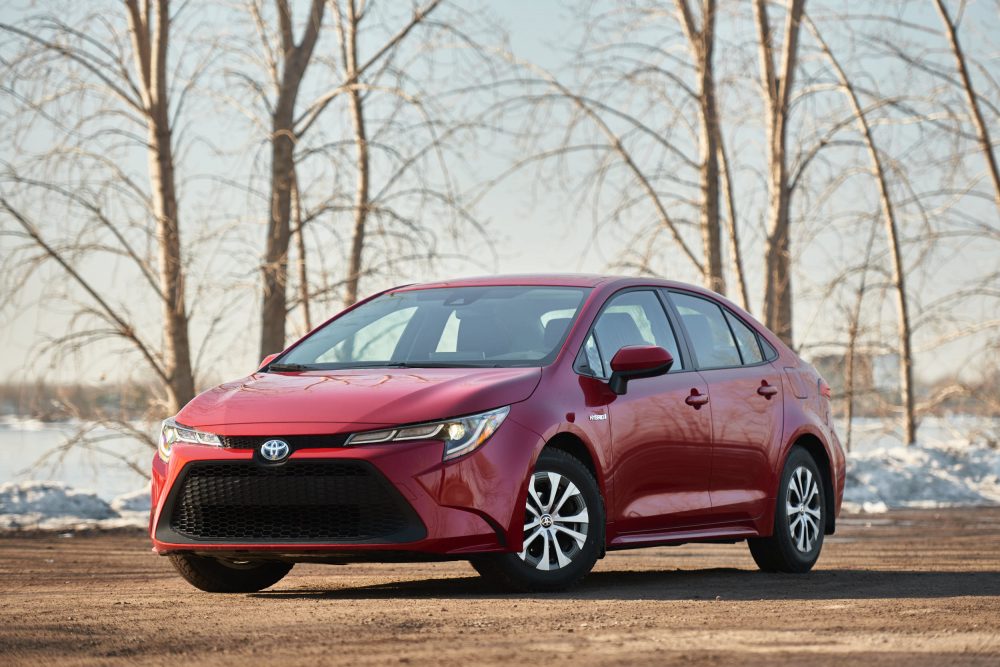 Cheap cars are always cool, but with the 2021 Toyota Corolla hybrid, you’re getting a little more than an affordable transportation device. You’re also getting hybrid technology that was once reserved to a handful of automobiles. And that’s a big deal. It means that Toyota has trickled down its hybrid tech to the point where everyone can afford it. 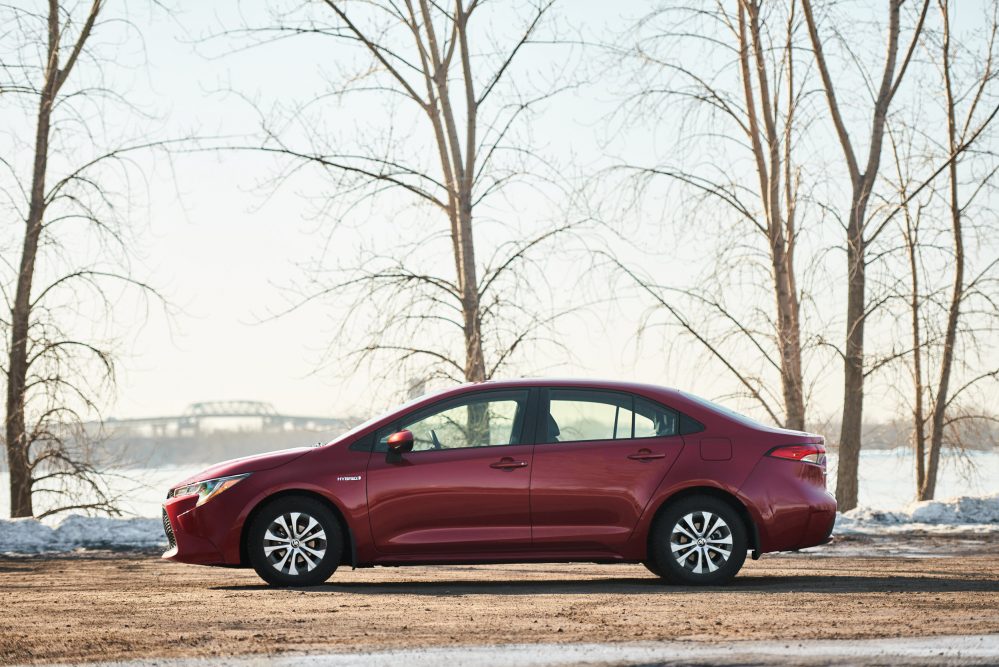 This also means that it’s reliable. Ask any cab driver what car they prefer to own and chances are they’ll tell you a Prius or a Camry hybrid. I once rode in a Prius taxi cab in LA that had more than 600,000 miles. That’s almost 1 million kilometers. 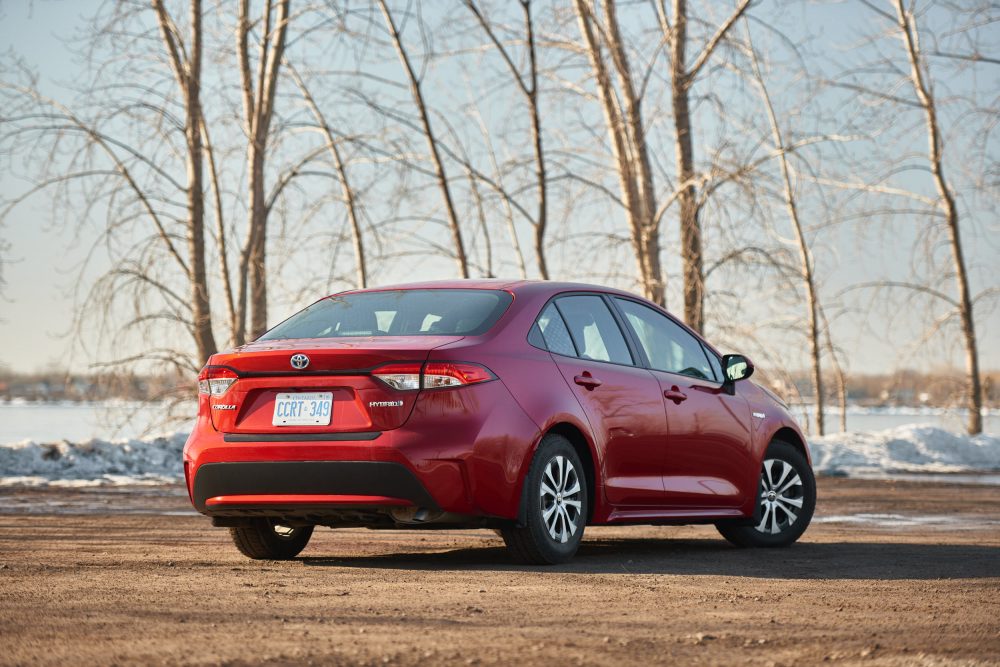 Underneath the Corolla hybrid’s hood is essentially the same drivetrain as a Prius, but for almost $4,000 less. Just so you’re up to speed, hybrid means you don’t need to plug the car to charge its batteries. It basically does it all for you. But that also means it’s not an electric car. 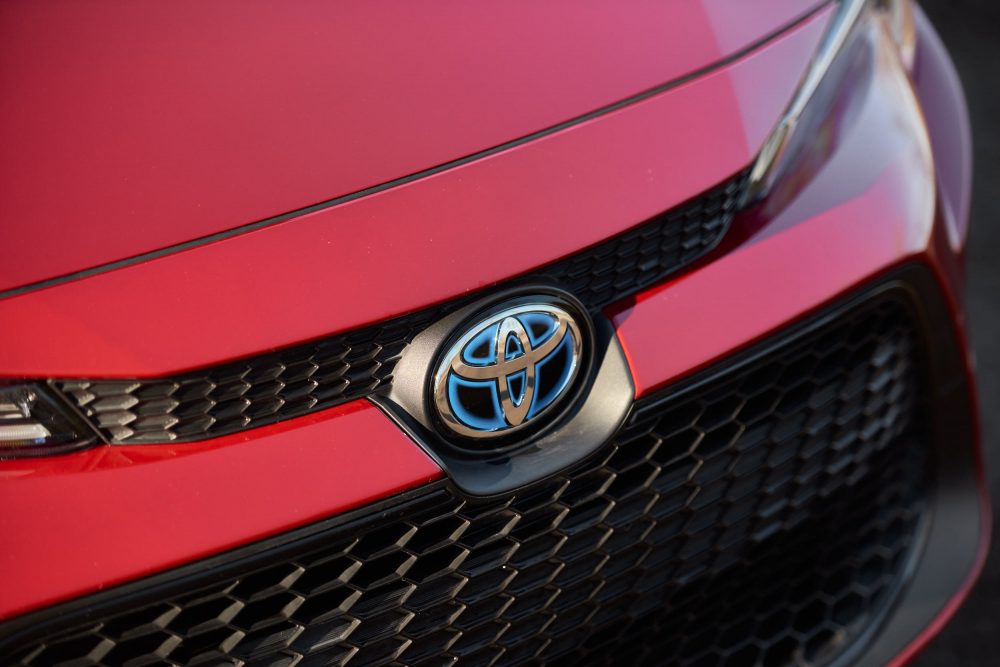 Instead, see the hybrid system as a way to help the gasoline engine burn less fuel and emit less emissions. The car uses electricity for the most energy intensive tasks like accelerating and idling. While coasting at about 90 km/h or when stopped at an intersection, the Corolla hybrid’s gasoline engine shuts off. At the end of the day, hybrid cars pollute almost half as much as regular gasoline-powered ones, and their fuel consumption is dirt low. For instance, when this Corolla is burning fuel, it will easily pull a 5.0L/100 km average. But Toyota says it can go down as low as 4.3L/100 km, which is highly impressive. For reference, a standard, non-hybrid Toyota Corolla will average about 6.5L/100 km at best. 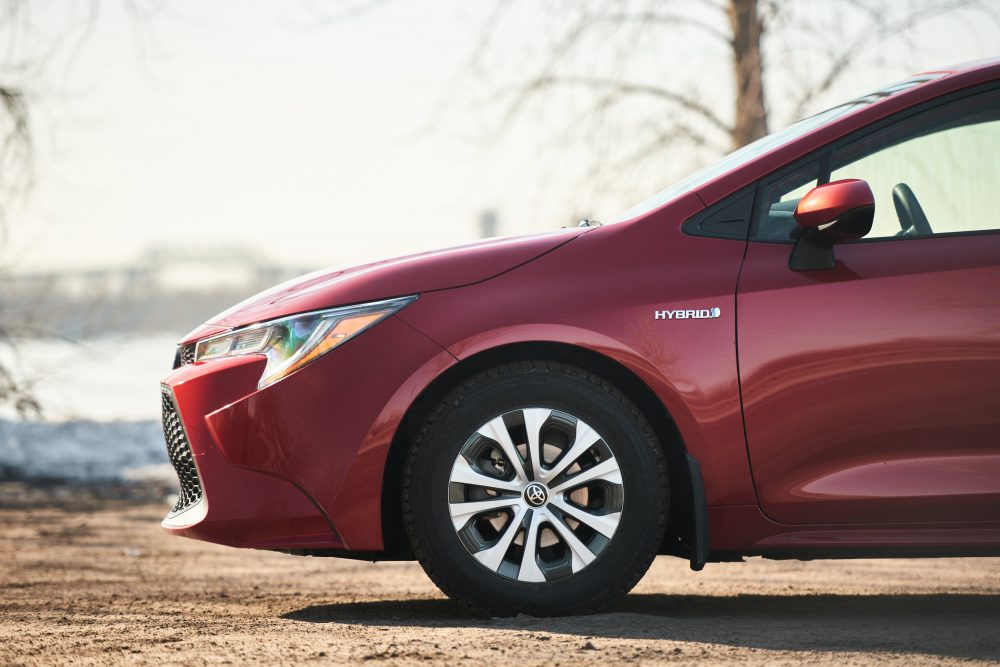 To achieve such frugality, the Corolla hybrid is powered by a tiny little 1.8-liter four-cylinder, which is then coupled to two small electric motors. One of them acts as a generator to run to car’s accessories and start the gasoline engine, while the other is squeezed between the transmission and the gas engine. 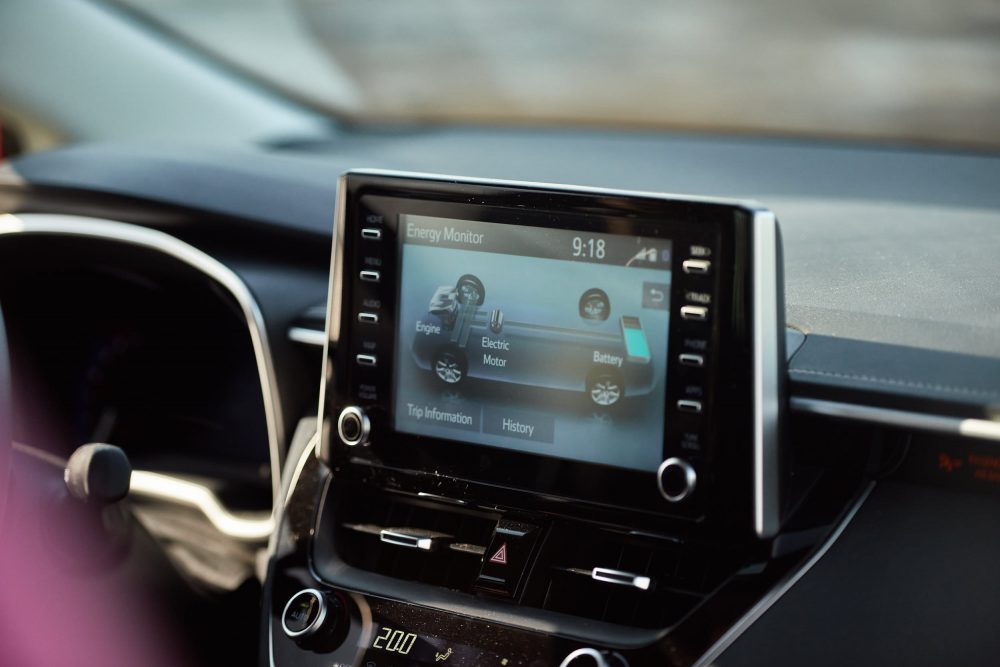 There’s a lithium ion battery, like in a electric car, but it’s a lot smaller due to a constant source of energy. Total combined output is rated at 121 horsepower and 105 lb-ft of torque. It’s all mated to a continuously variable transmission (CVT). The Corolla hybrid can run on pure electricity alone, but only for a short amount of time, and below speeds of 45 km/h. 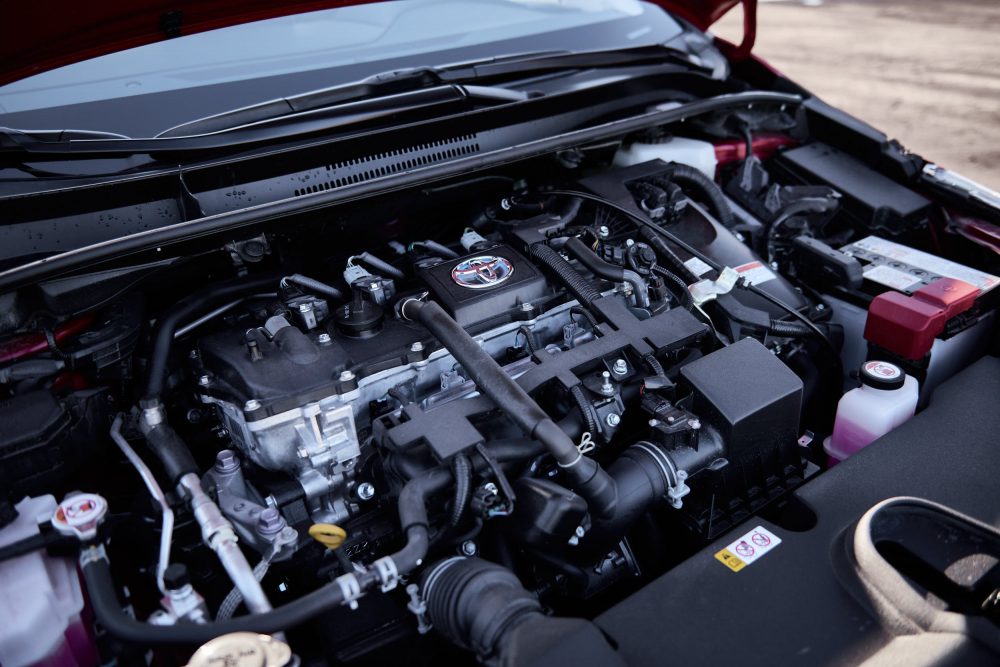 Pricing for this electrified Corolla is where things become very interesting. It kicks off at a very reasonable $27,279. My tester had the only optional $2,000 Premium Package. It adds wireless phone charging, rear heated seats, Softex seats (which kind of look and feel like leather), a heated leather steering wheel and an 8-way power adjustable driver’s seat. Final price: $29,279 for the example you see here.

Slow, But Not Painful 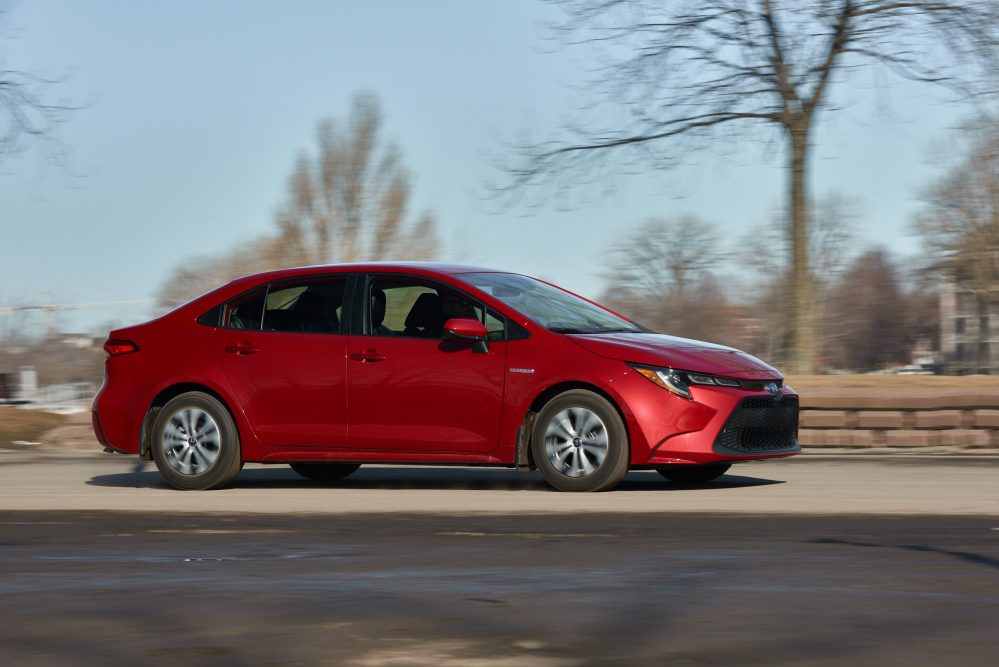 Obviously the 2021 Toyota Corolla hybrid is neither quick nor particularly exciting to drive, but it’s not a painful driving experience neither. There’s something to be liked about saving fuel and being carried away in a smooth, quiet ride. 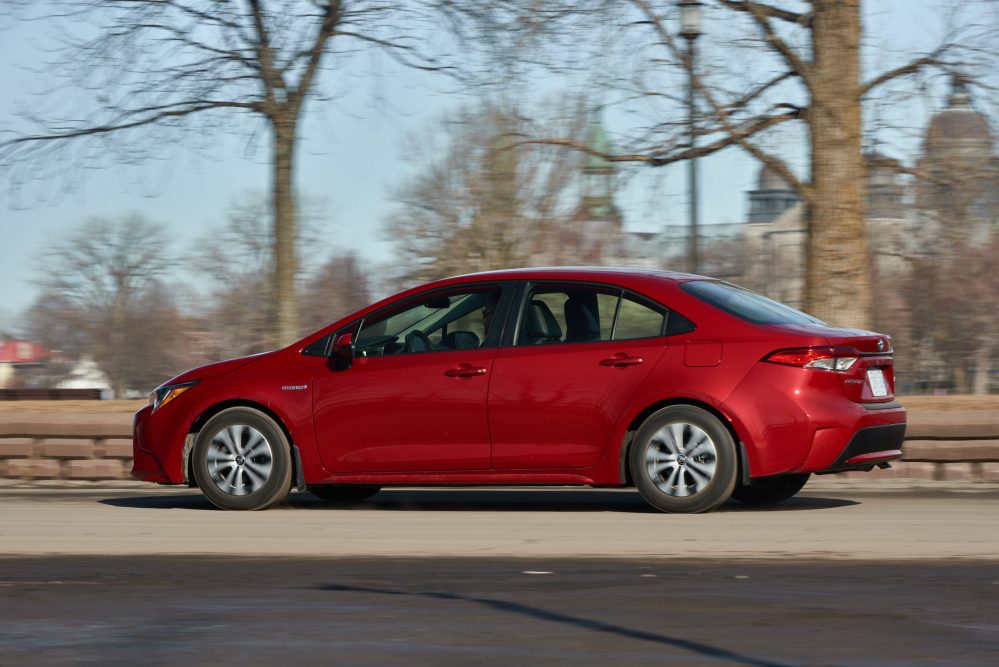 That’s unless you plan on gunning the throttle everywhere you’ll go. In that case, you might find that the buzzy drivetrain, coupled with the elastic feel of the CVT, could get a little annoying. That said, you’ll be flooring it for no reason since not much happens when you gun the throttle in a Corolla hybrid, except for a lot of noise. 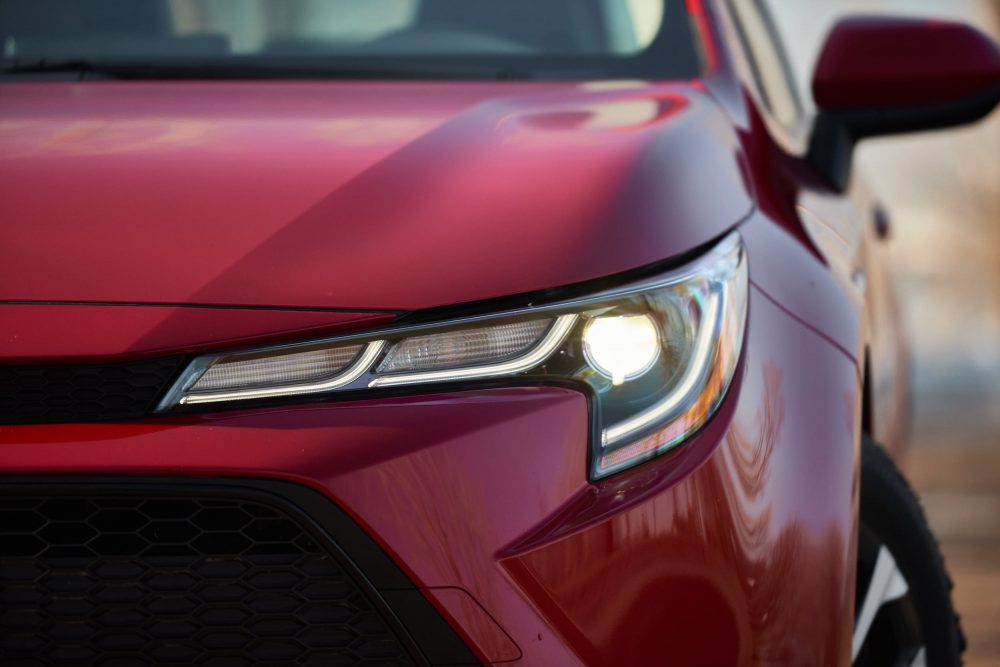 Instead, drive this thing casually and at decent legal speeds and you’ll be rewarded by the car’s smooth and stable ride, well built interior and impeccable chassis dynamics. Yes, you read that right: chassis dynamics. That’s because the current Corolla is no longer the lifeless appliance it once was. It’s built on Toyota’s modular TNGA architecture, which currently underpins virtually everything from RAV4s to Lexus ESs. On top of being hyper solid and stronger against crash impacts, this platform focuses on lowering the vehicle’s center of gravity. And it actually works. 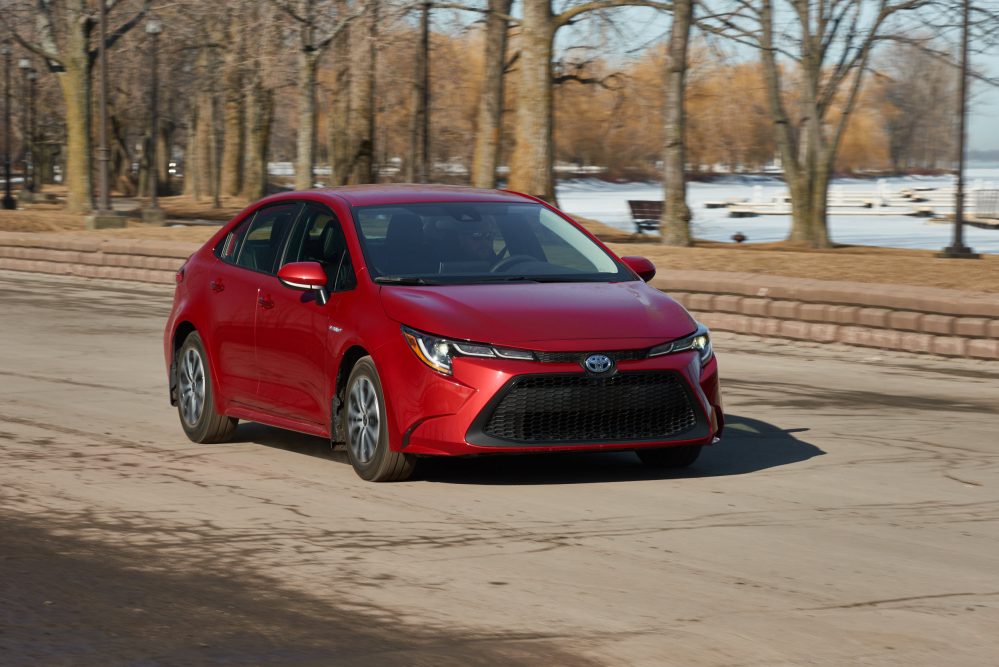 The Corolla feels nice and buttoned down on the road, with confidence inspiring handling that allows you to hit corners quicker than you ought to in a hybrid car. That’s a good thing if you’re trying to save fuel because it means you can use your momentum to go through a corner faster, resulting in less throttle input when coming out. The Corolla also feels all grown up, mature and refined, with a hint of Lexus injected in its overall quality. 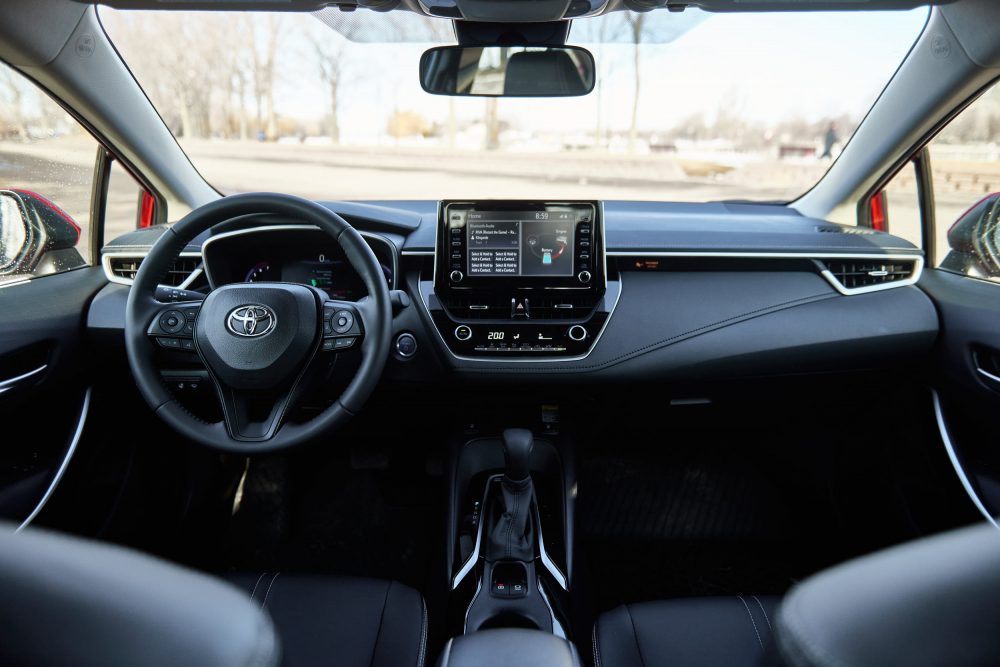 Inside, it’s the standard Corolla treatment. There’s no indication this is a hybrid except for the added Eco Score menus in the gauge cluster and infotainment system, as well as an added menu to monitor how the technology is operating underneath your butt. There’s also an EV Mode button, handy if you want to crawl through a mall parking lot in all-electric mode. 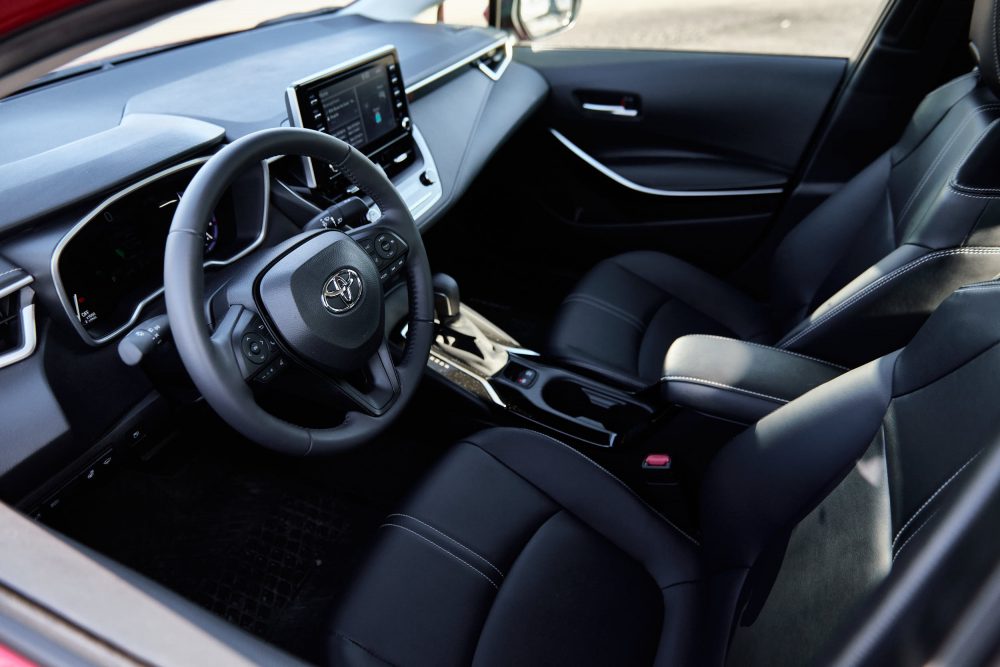 It’s a well put together cabin, with materials of fair quality for the price. Front seat comfort is fine, but never extraordinary, while rear leg room could be a little cramped if you’re sitting behind a tall human being. Overall headroom is fine, however, while total trunk space, which sits at 371 liters, is a tad below segment leaders like the Honda Civic sedan (428 liters) and Nissan Sentra (405 liters). The good news here is that even if it’s a hybrid, the rear seat can be folded down thanks to batteries that have been stuffed underneath the seat itself. 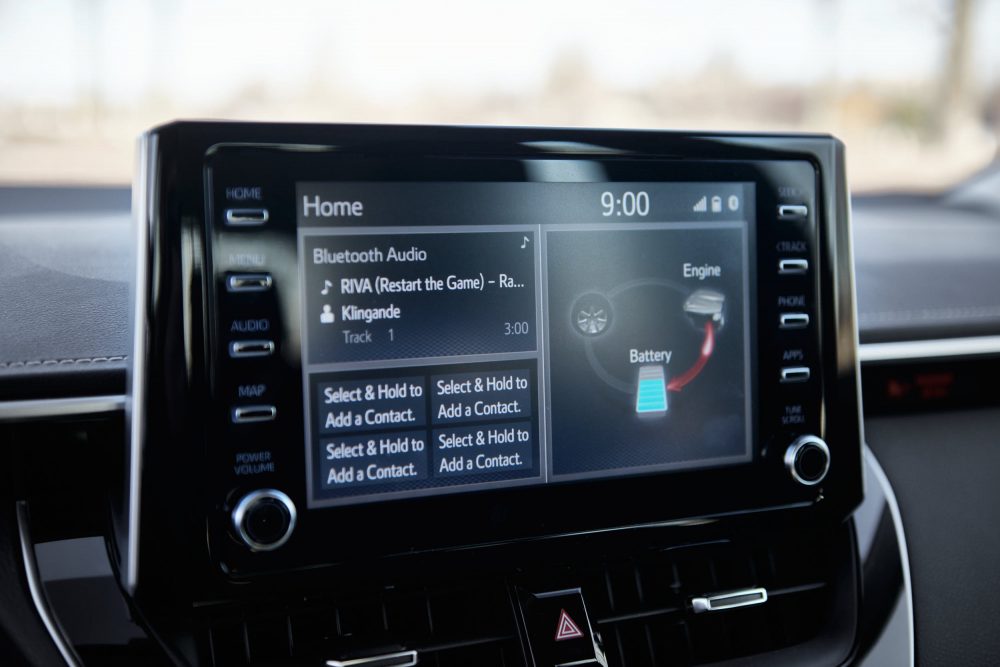 Meanwhile, Toyota’s infotainment systems continue to amuse me due to their inconsistent interfaces. It’s a surprise in each model. In the Corolla, it works well enough to quickly get your stuff done, and pairing your phone happens a little quicker than in some other cars thanks to a system that detects your phone first and not the other way around. That’s clever. 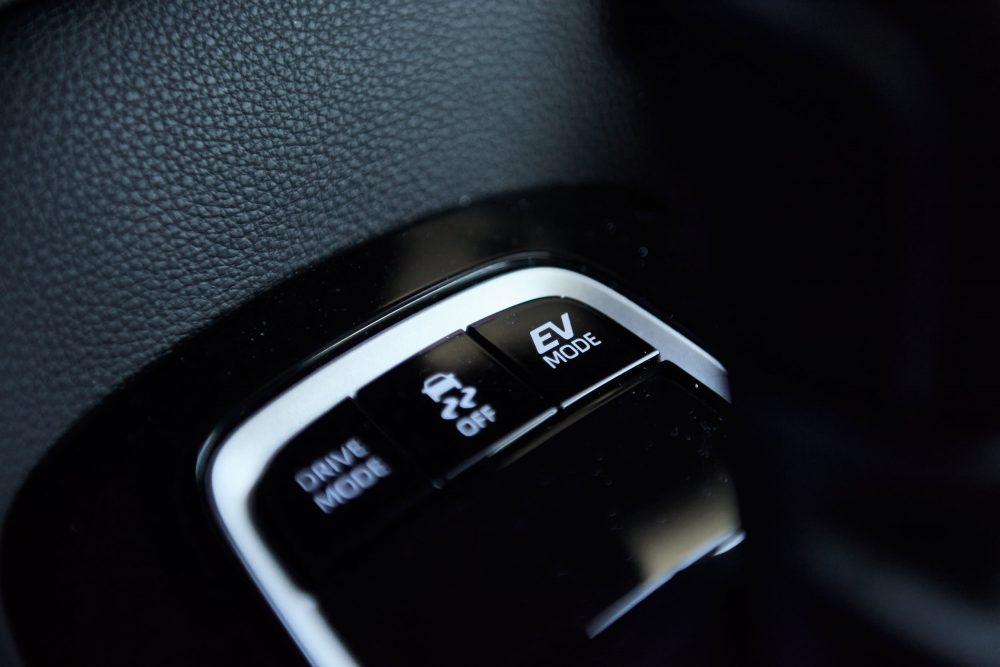 The menus do remain a tad cluttered, though, with some confusion in what they actually do and how they’re labelled. Some simple tasks, like accessing the car’s setting do require a few extra steps. But Android Auto, Apple CarPlay and wireless phone charging all operate with ease. 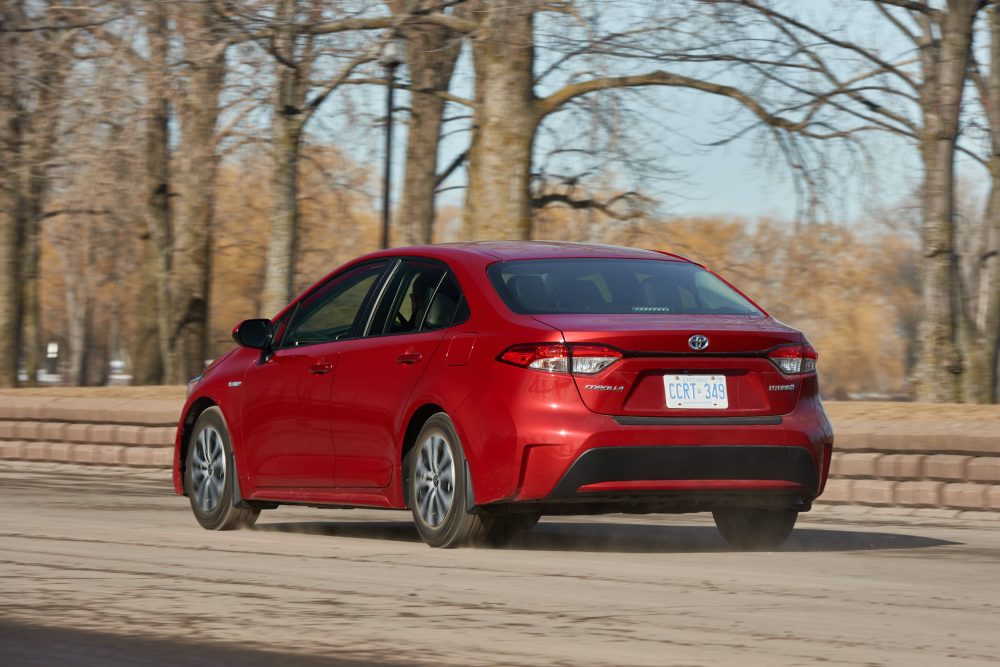 The 2021 Toyota Corolla hybrid is downright brilliant, cheap and frugal. And it’ll probably last forever while not costing too much in maintenance. It basically takes all the standard Corolla traits and cranks them all up to 11. And because of that, it’s a car I absolutely respect and recommend without hesitation.