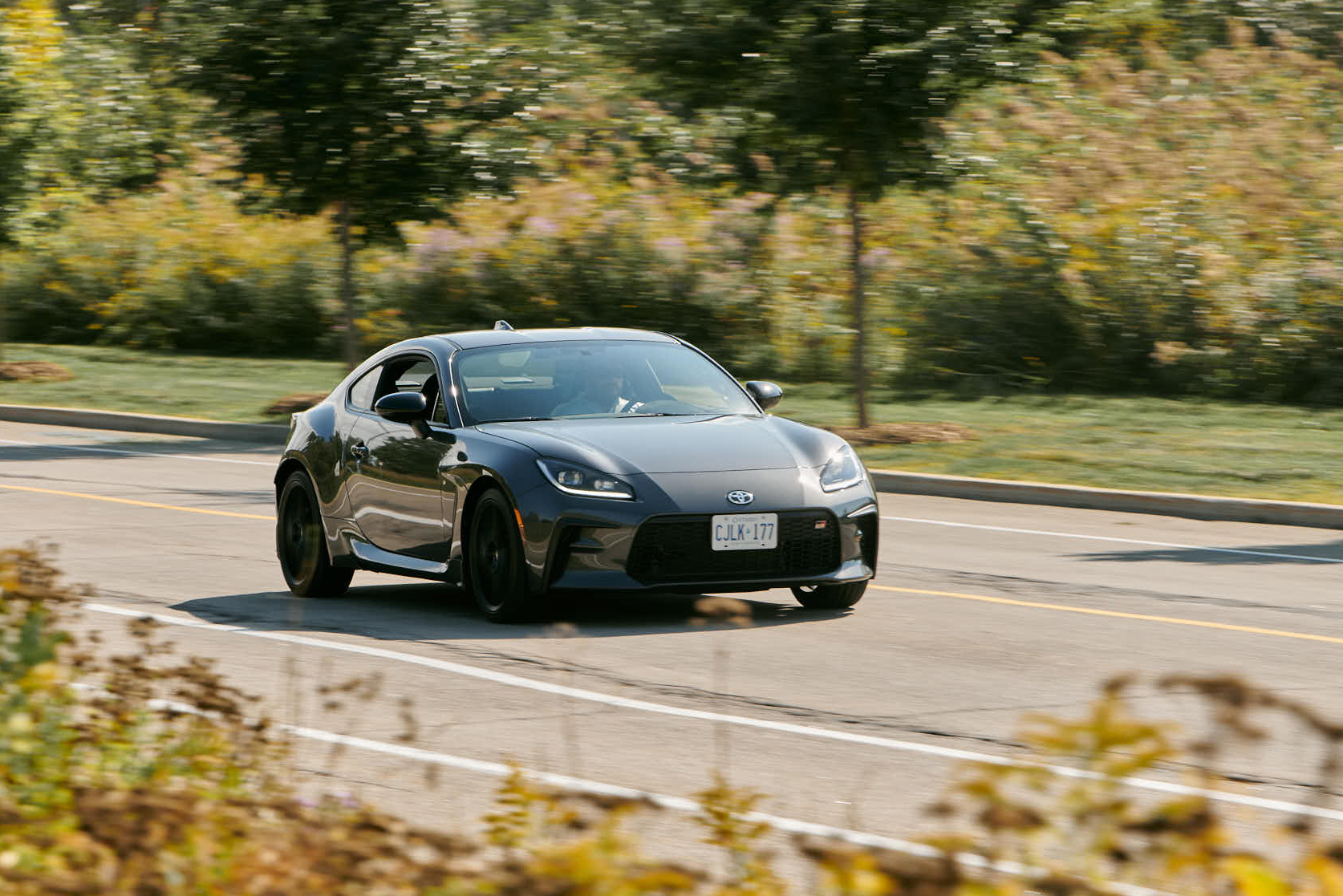 The 2022 Toyota GR86 is an extraordinary car. I mean, its essentially the exact same machine as the equally impressive Subaru BRZ albeit some slightly different chassis and suspension tuning. From an enthusiast standpoint then, these twins are exactly what the doctor ordered: lightweight, well balanced, precise, huge fun to drive and, above all, affordable. It’s the perfect car until someone decides to spec it with an automatic transmission. Wait, what?

Prettier Than Its Twin? 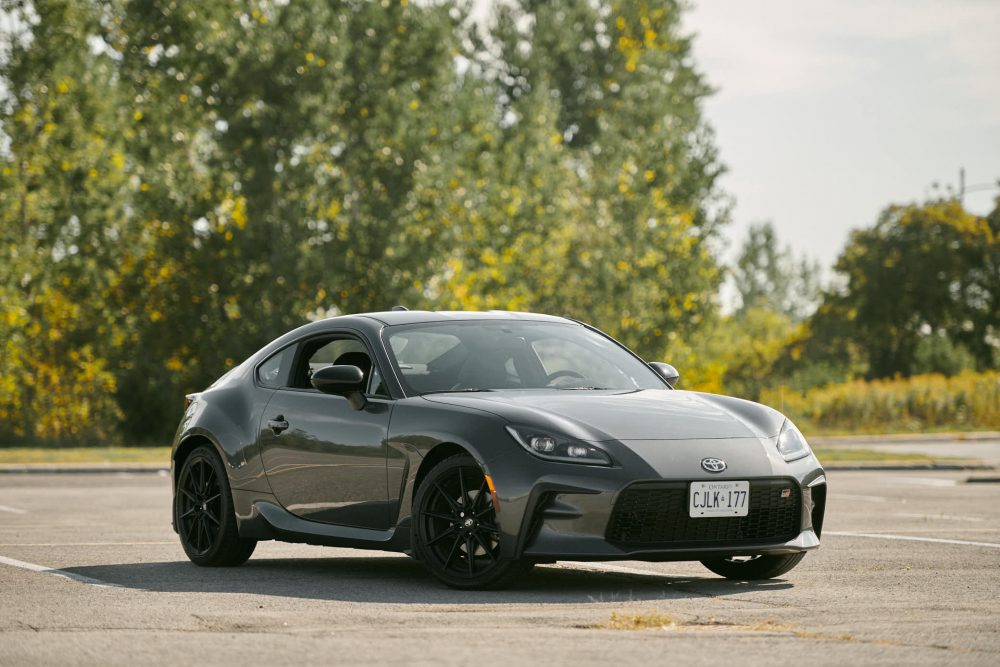 It’s really hard to distinguish the design differences between the 2022 Toyota GR86 and the 2022 Subaru BRZ. The alterations are essentially found in the front fascia where the Toyota has a larger mouth and different side intakes. It appears less happy than the Subaru and looks more focused on the art of devouring roads. So while I still like the BRZ a lot, I prefer the way the Toyota looks. That’s funny, because for the last generation cars, I actually preferred the Subaru’s face. 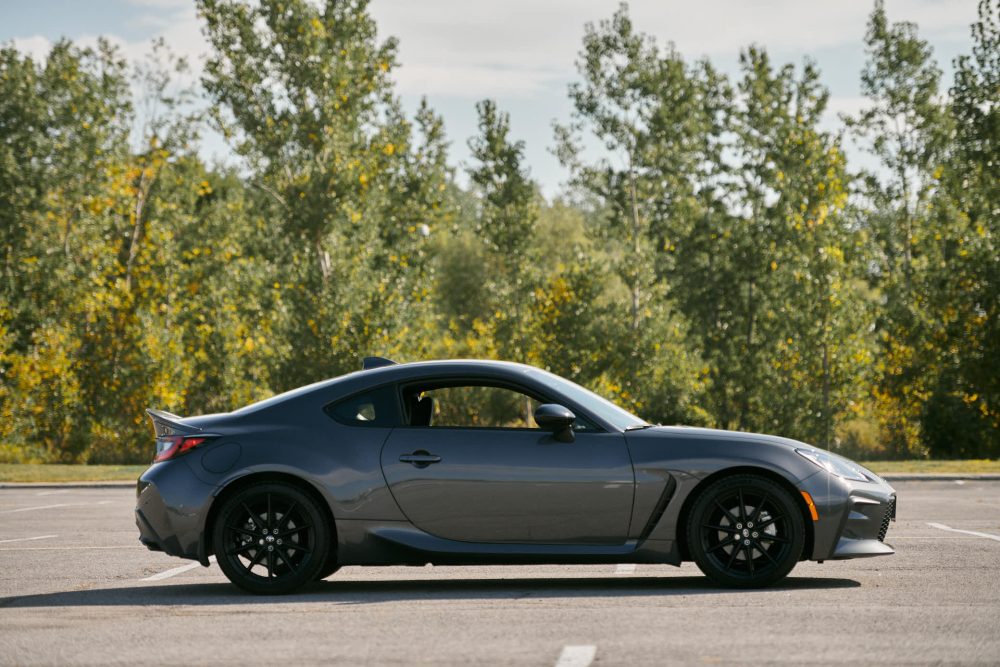 My tester also had a bitchin’ rear duckbill spoiler that sat atop the body’s integrated rear wedge, which really looked the business. That’s part of the Premium trim, which also includes leather/alcantara seats, an upgraded 8-speaker sound system, an “active rear sport differential” which is a fancy Toyota term for limited slip, and a slew of semi-autonomous driving aids. You know, the kind of stuff you DON’T want in a Toyota GR86? 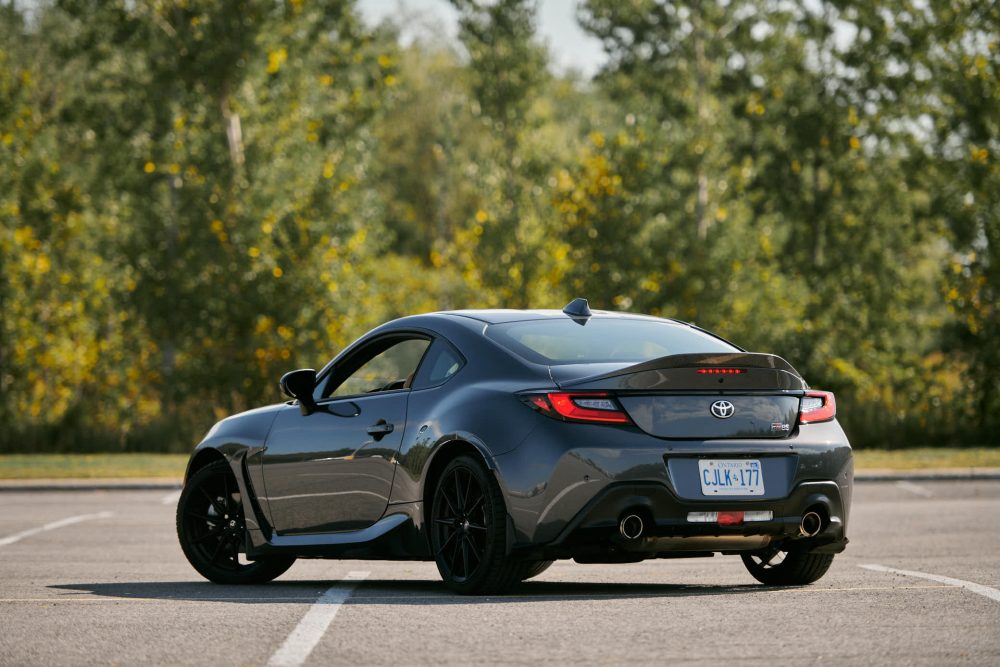 Another weird option this car is equipped with is the available six-speed automatic transmission. I mean, I get it. Some people buy this car for looks and, frankly, the list of drivers that are able to drive stick these days is getting slimmer each month. But an automatic in a Toyobaru, really? Toyota and Subaru, look at the Honda Civic Type R. Does it come with an automatic? No, it doesn’t. That’s because it’s a true driver’s car. 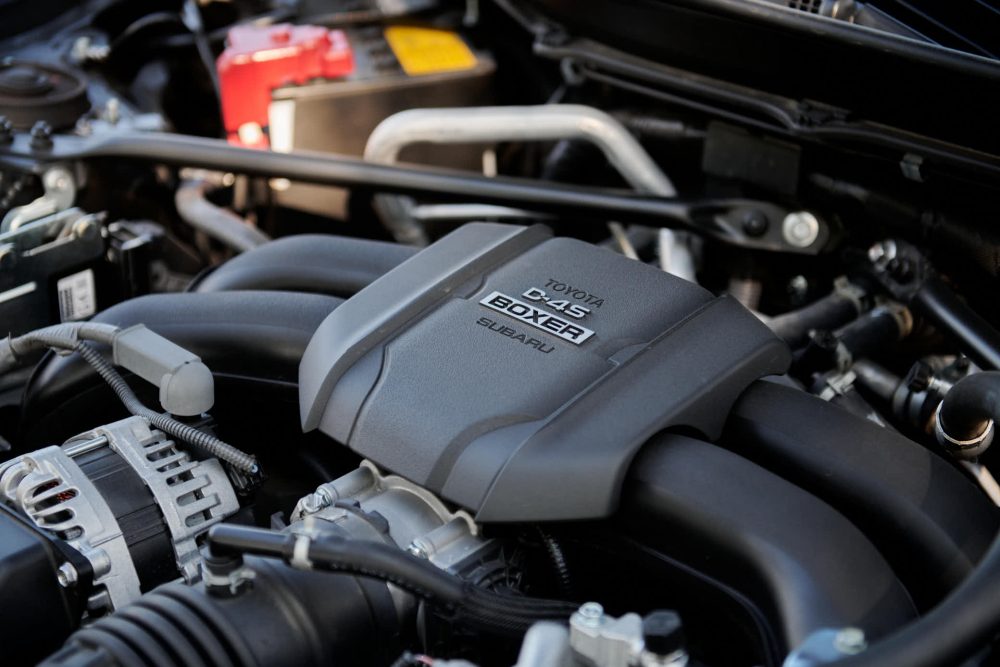 Anyway, at least Toyota doesn’t fiddle with the GR86’s excellent weight distribution, rear-wheel drive layout and exquisite engine. And the automatic doesn’t remove any power. In this case it’s the same 2.4-liter naturally aspirated Boxer flat-four as in the BRZ. It’s good for a healthy 228 horsepower and 184 lb-ft of torque. 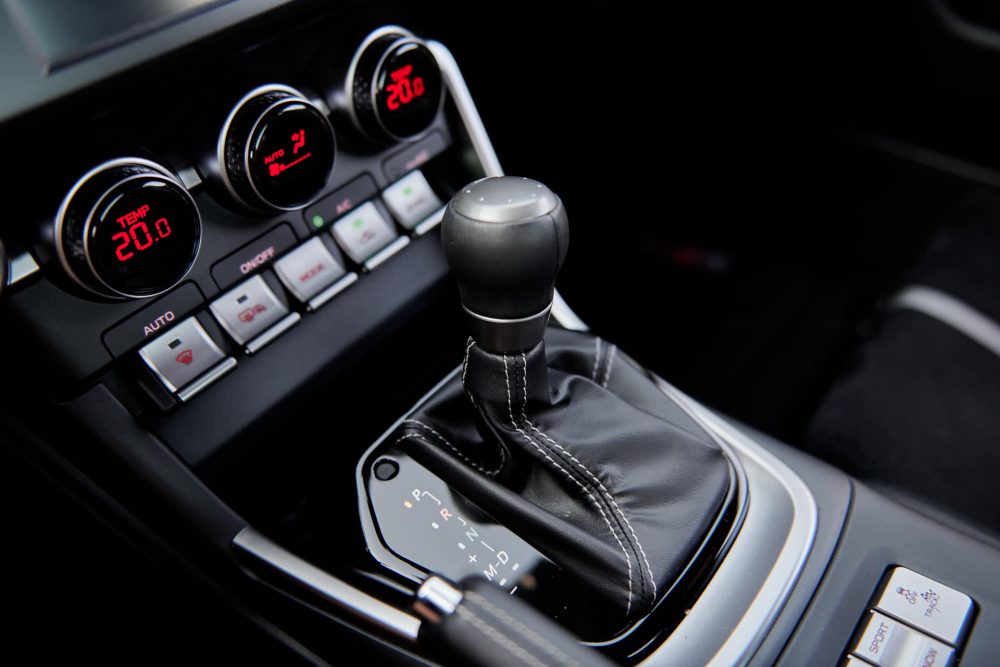 Yes, it’s also possible to equip the car with a six-speed manual gearbox. Personally, I wouldn’t have a Toyobaru in any other way. Pricing for the car you’re seeing on these pictures was  $38,837 including freight and other fees. Well priced. 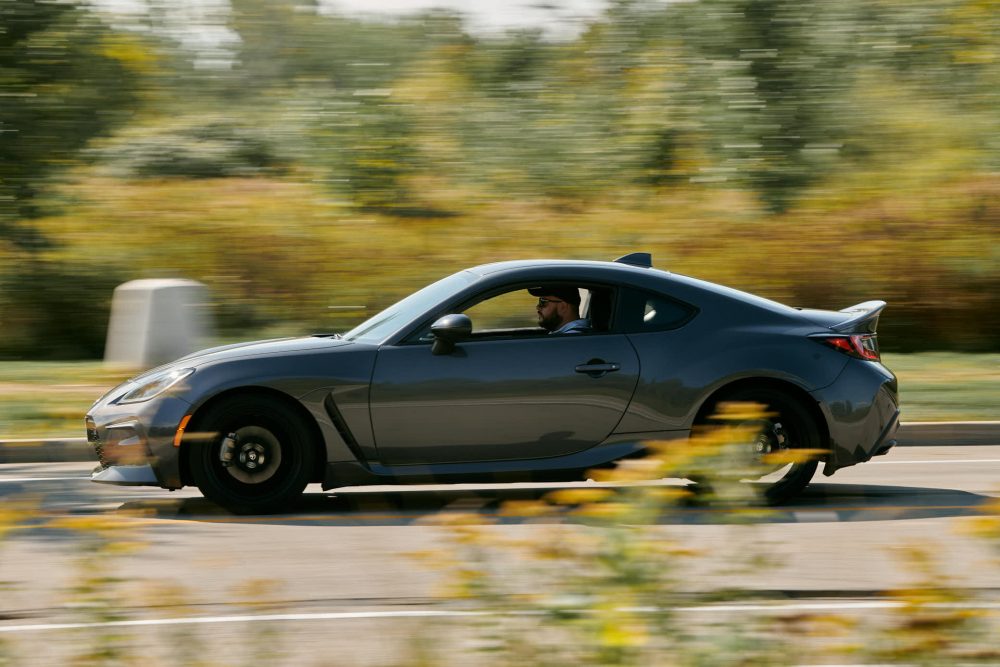 Ok, so automotive enthusiast babbling aside, the Toyota GR86 is honestly not that bad with the automatic transmission. I mean, it’s fine in the sense that it shifts quickly enough and doesn’t get in your way when you’re trying to have a bit of fun with the car. Because, let’s face it, the Toyobaru twins were never built to be pretty secretary’s cars, but rather affordable performance tools designed to satisfy drivers at the racetrack or out there on a winding road. 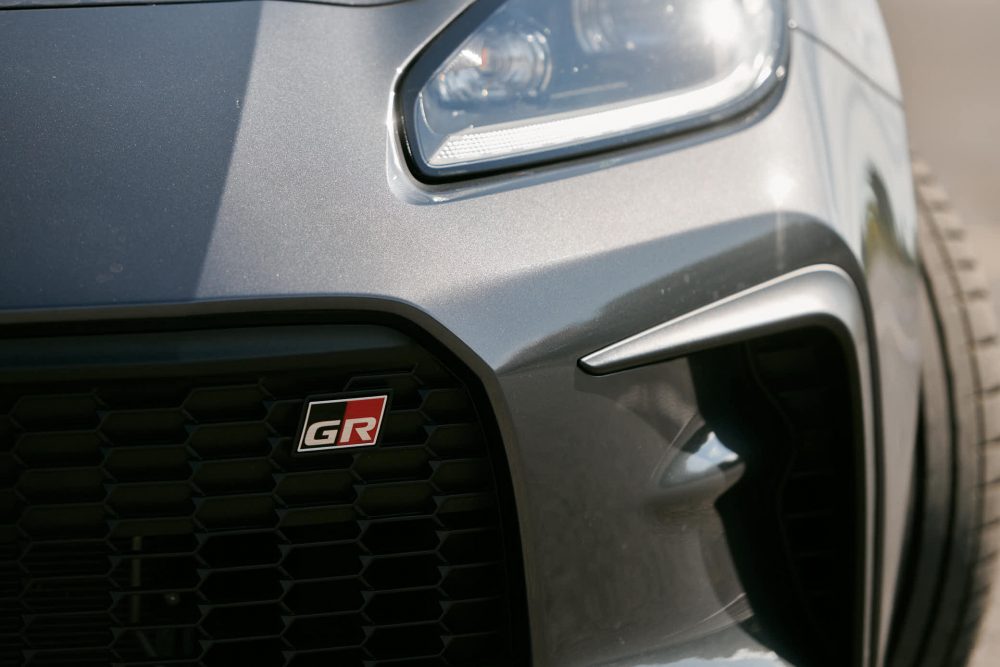 So, for someone who wants a sports car but never actually took the time to learn how to drive stick – doesn’t care to do so – has health issues causing the depressing of a clutch to be painful – daily commutes in a heavily congested city and simply hates shifting – the automatic Toyota GR86 is totally acceptable. 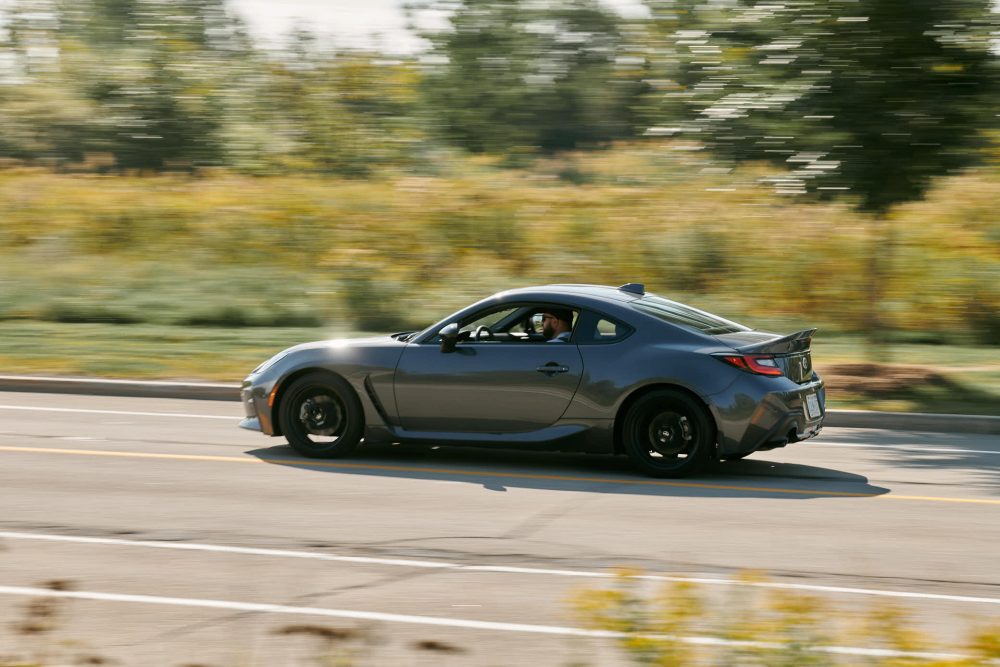 It also allows you to do a bit of shifting yourself by way of paddle shifters or directly on the shifter itself, and, honestly, it works totally fine. As a matter of fact, it didn’t take much away from the car’s otherwise adorable driving experience. No matter the transmission you fit on this little thing, it remains immensely tossable and super fun to drive. 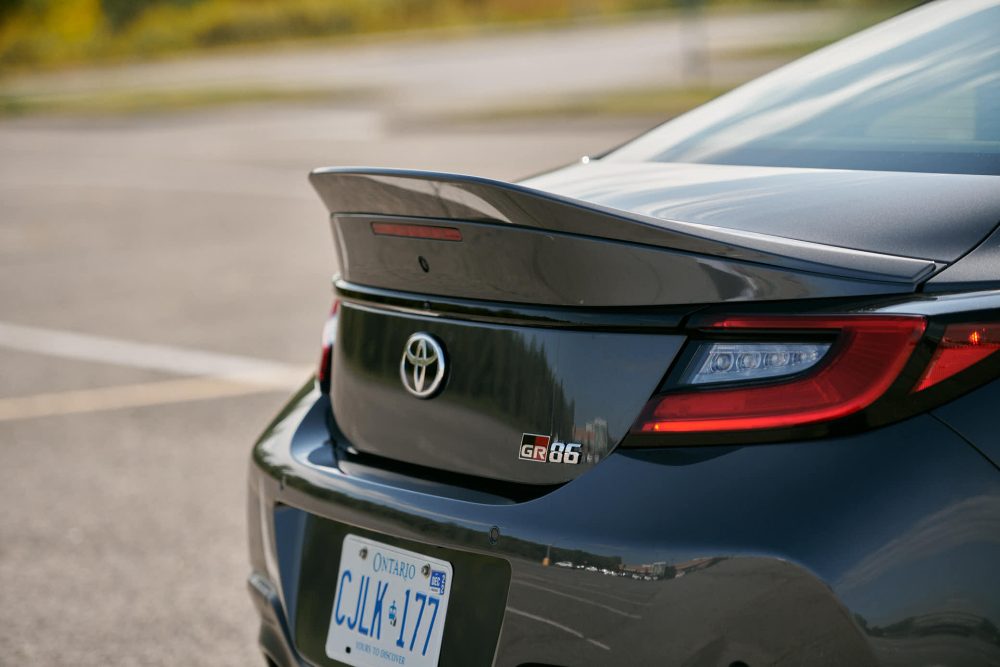 Now at this point, you’re probably wondering which one is best: this, or the Subaru BRZ? My answer to that is, I don’t know. I’m not going to do like so many auto journalists out there and pretend I felt a difference in the way these cars were tuned. Because I didn’t. You would really need to drive both cars back to back at their limits to really notice the tuning differences. Truth be told, they’re both amazing. They both make you feel free behind the wheel. And they both command you to hit an open road and drive the fuck out of them like there’s no tomorrow. 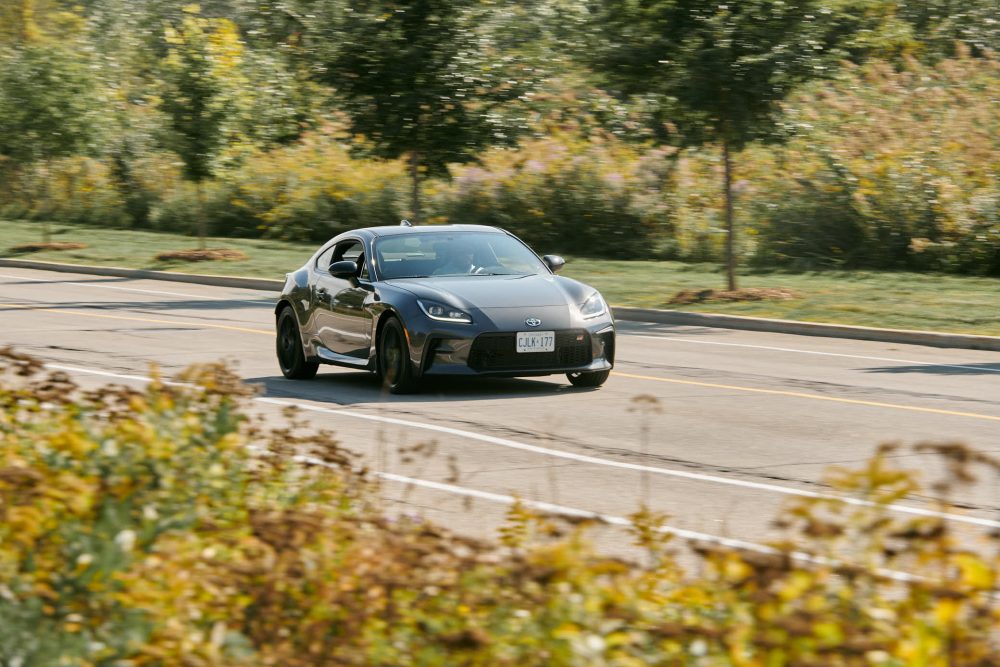 The 2.4-liter H4 is as much of a gem in here as it is in the turbocharged Subaru WRX. What I particularly love about this engine is that although it’s among one of the largest four-cylinders currently on sale due to its displacement, it feels just as lively as the old 2.0-liter it replaces. Yet, while this engine is rev-happy and always willing to be thrashed, it’s also butter smooth, with a surprisingly linear torque curve that adds a pleasing touch of refinement. 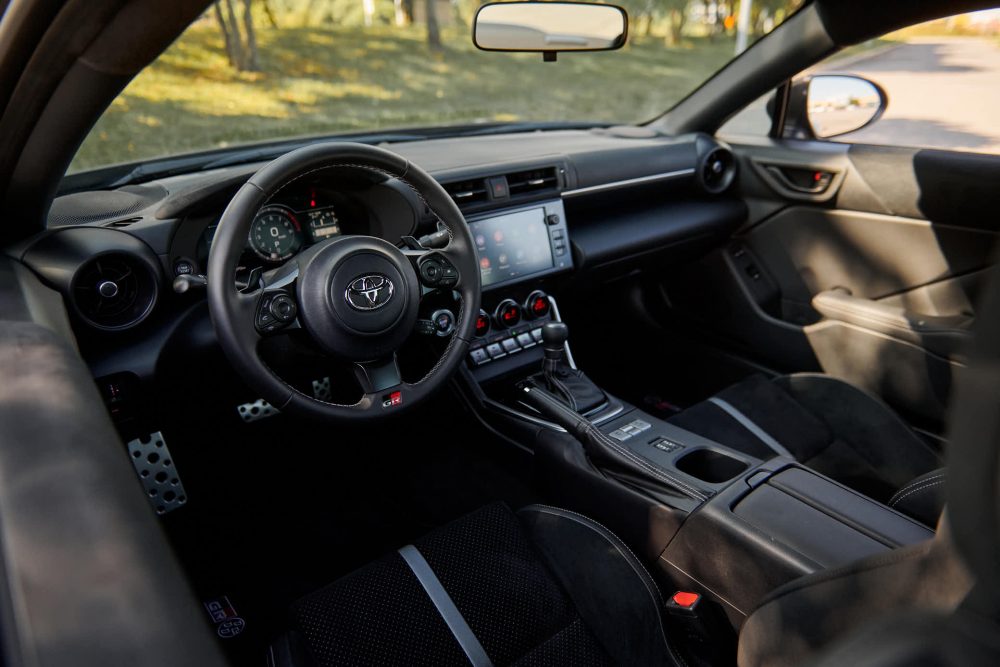 Refinement really is the best way to describe how this 86 has evolved over time. Its cabin doesn’t try to reinvent the wheel and, yes, it’s still just as cramped in there as before. The rear seat is pretty much useless. And if you’re bit wide around the edges – like me – you might find those sport bucket seats a little tight. It would also be nice to have a bit more styling going on inside. It’s all very stale-looking. 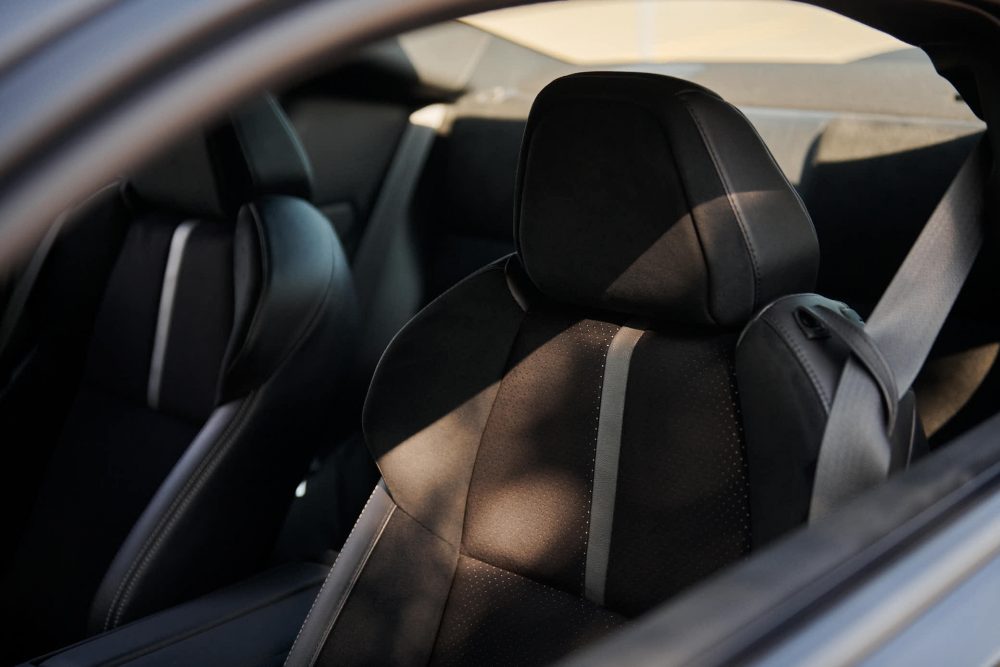 But whatever you need is right there at your disposal, the infotainment system simply works, the car is supremely well put together and that steering wheel is small, thin and communicative. Hell, it could very well be taken straight out of a Porsche for all I care. It’s that good. 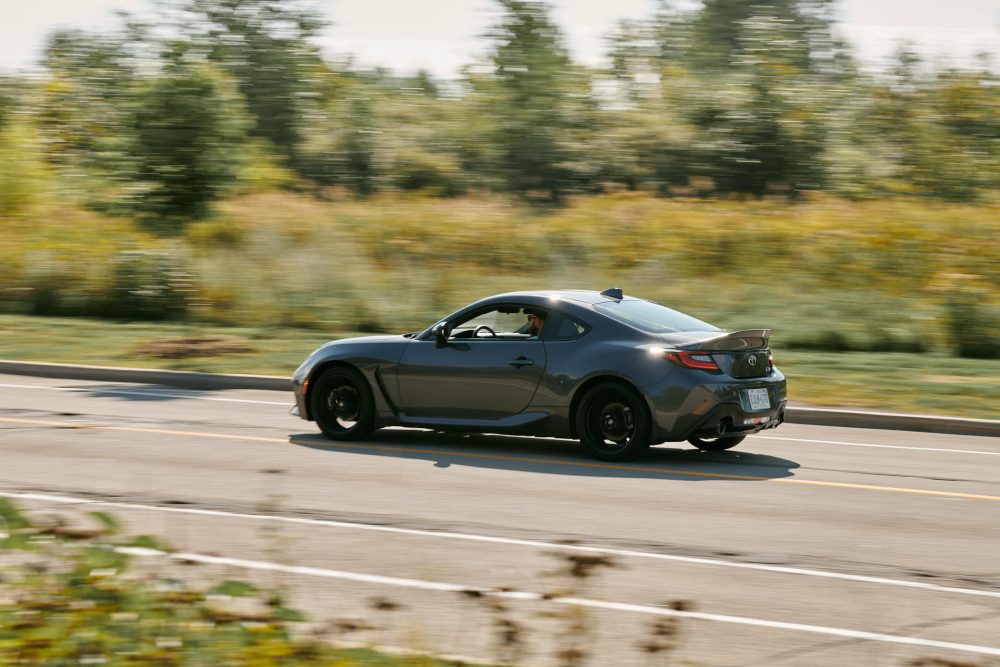 So, a 2022 Toyota GR86 with an automatic transmission isn’t the penalty box I was expecting it to be. I mean, sure, I’d get mine with a stick and I’m sure that if you’re reading this blog, so would you. But some people don’t care about that stuff. And when you think about it, if Toyota can manage to convert a non car enthusiast by attracting them with a sexy styling, then aren’t we all winning in this story?  I believe we are.