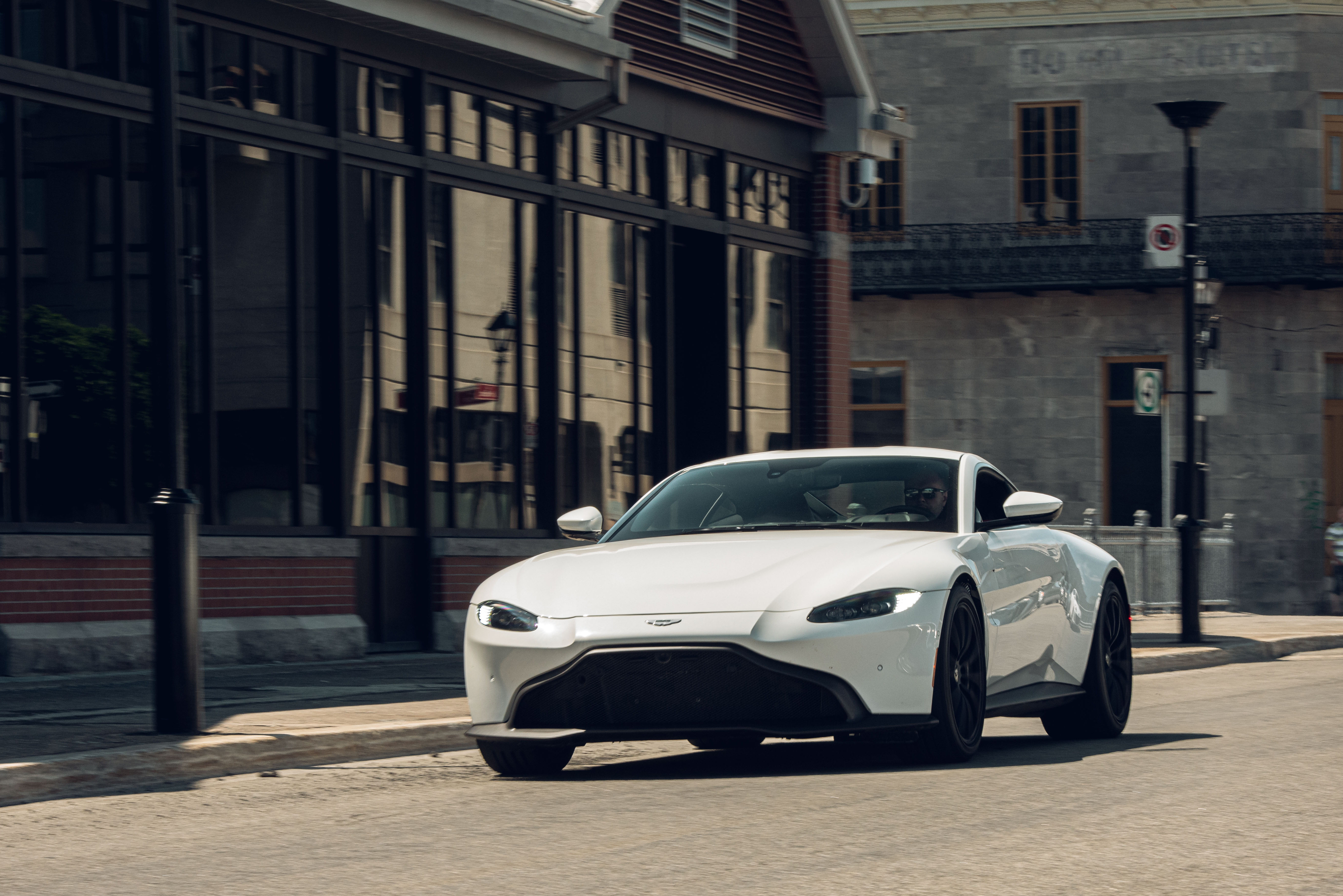 This is the second time I drive the 2020 Aston Martin Vantage. Except this time around, I got a bit more seat time in one, allowing me to properly assess its character, or lack thereof. Mixing British and German engineering is always a risky move, but in the Vantage’s case, the partnership allows the car to be more competitive, both mechanically and technologically, against a flock of seriously solid rivals. The good news is its level of flamboyance and exclusivity has been kept intact. 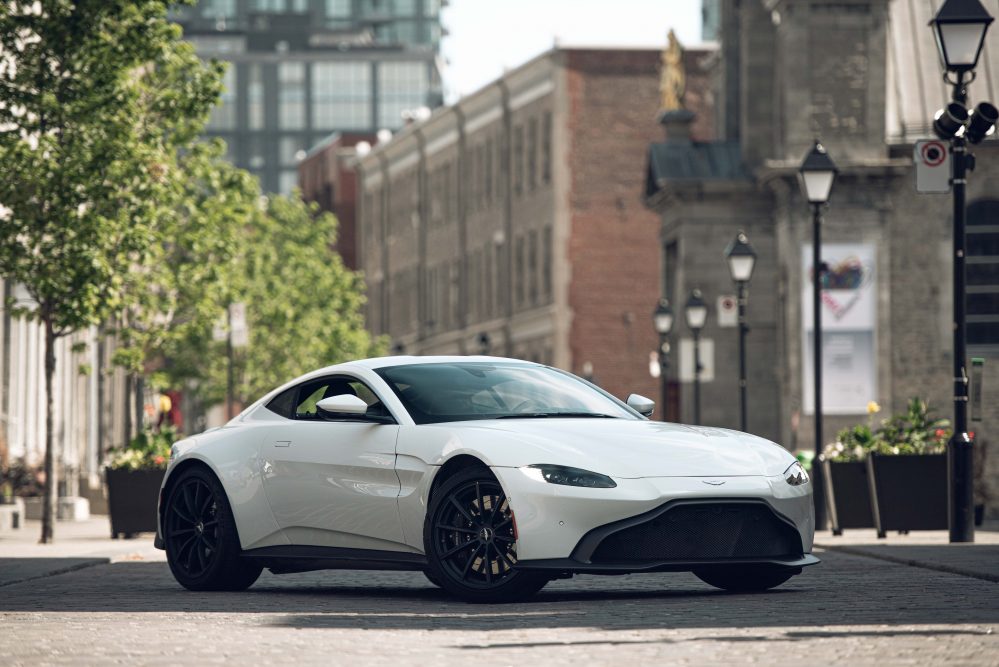 I’m going to come out and say that I like what Aston Martin has done with the Vantage’s design. This is a truly beautiful automobile through a clean, modern design, wide hips and a low ride height. Except, it seems to work better with bright, flashy colors. Neutral tones like this white sadly dissipate some of the otherwise brilliant shape, making the face look like of a large catfish. 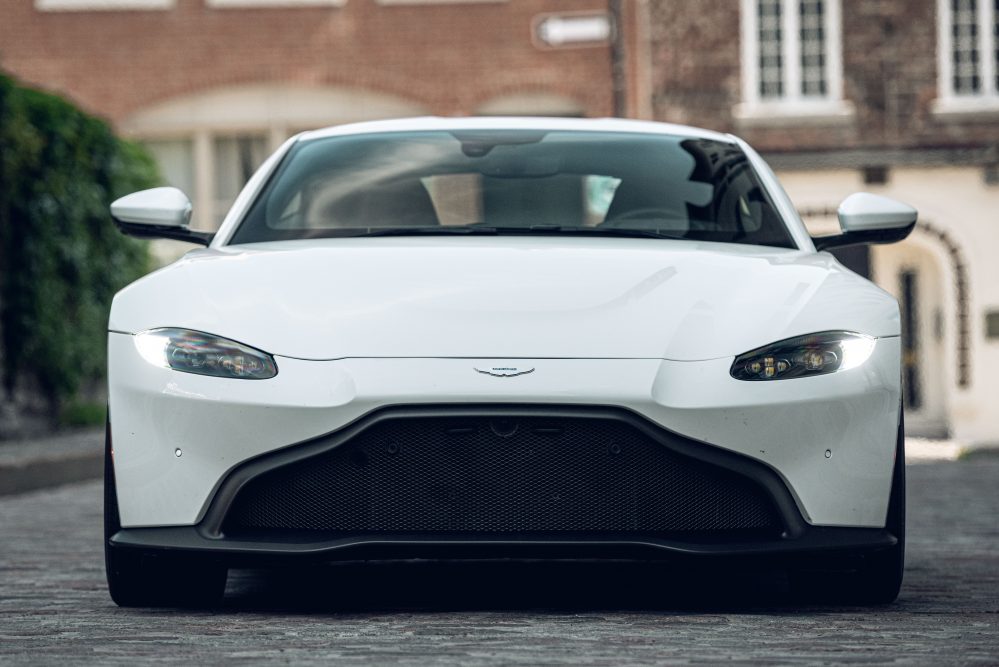 But the Vantage is short, wide and has proper sports coupe proportions, qualities that still allow it to be a modern and striking performance device. Everything from the C pillar to the rear is absolutely perfect. Everywhere I drove this thing, people went nuts. 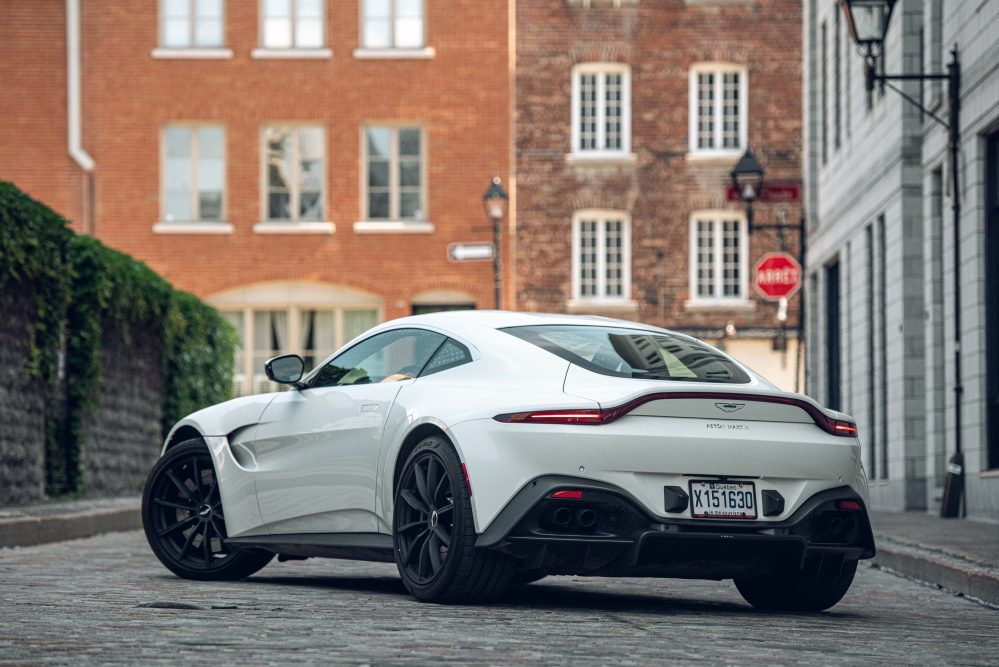 For the 2020 model year, things remain rather intact, except for a new optional carbon ceramic brake package and a slight reshuffling of available trim levels. The 2020 Aston Martin Vantage remains a customization queen, though, which gives it a slight edge over its rivals. 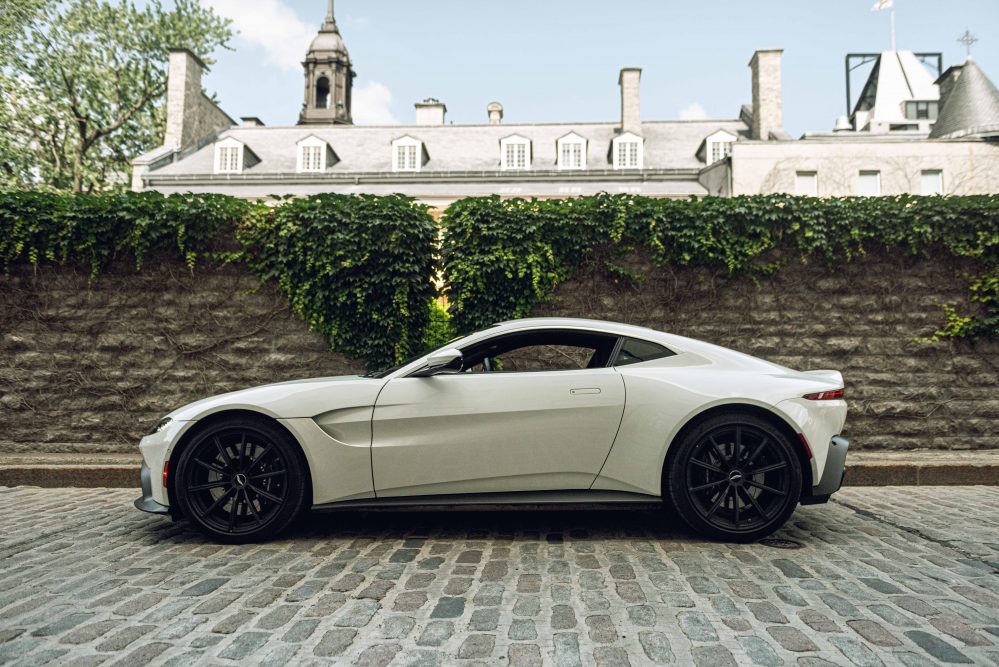 While most performance machines sold at this price point can be tailored according to the buyer’s preference, Aston Martin’s eloquently named Q division gives the consumer ultimate freedom in choosing colors, leathers, cabin materials and wheels. If Aston Martin currently doesn’t have what you’re looking for, it’ll happily build it as per your request. This means that if a yellow car with a pink interior is your fancy (please don’t), Aston will make it happen. 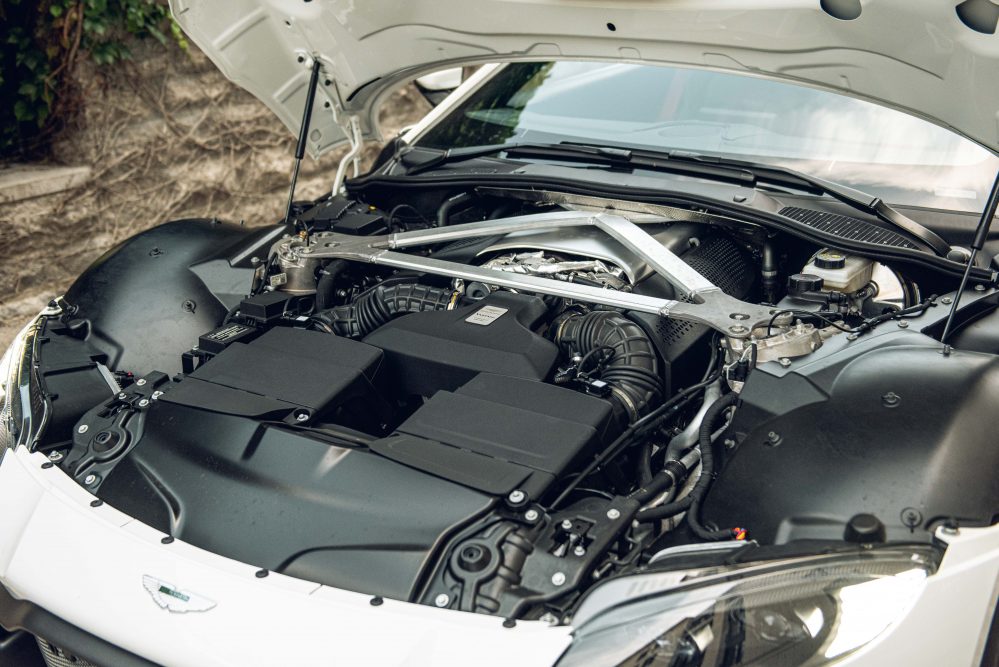 Power from the AMG-sourced twin-turbo 4.0-liter V8 carries over unchanged at 503 horsepower and 505 lb-ft of torque. It’s mated to ZF-sourced 8-speed automatic gearbox that sends everything straight to the rear wheels. Acceleration from 0 to 100 km/h is performed in a the vicinity of 3.5 seconds, while top speed is claimed by Aston Martin at 313 km/h. 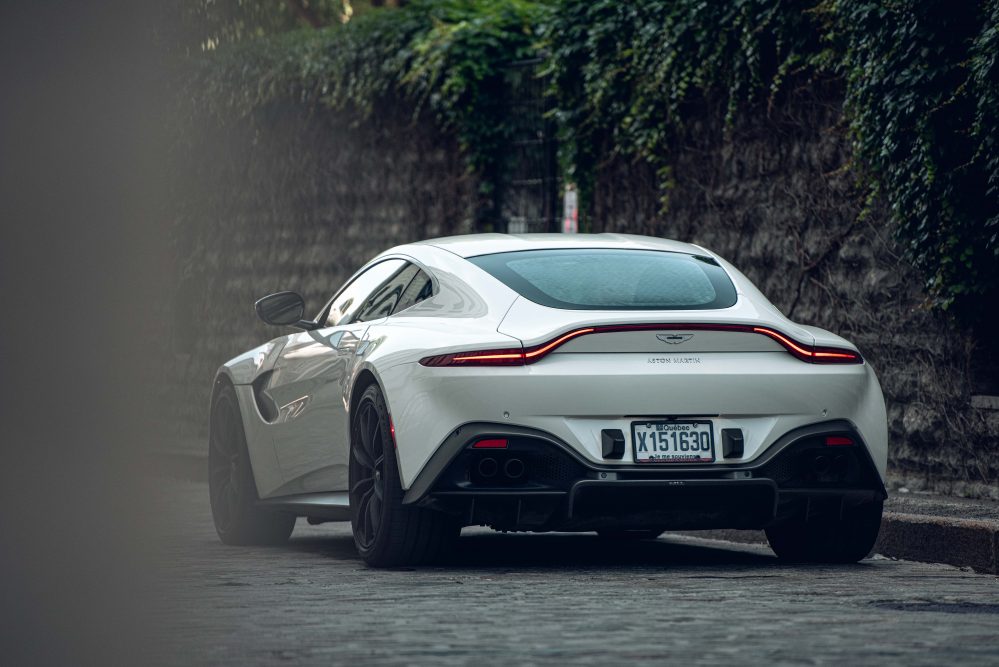 While the 2020 Aston Martin Vantage’s starting price is around $175,000, the optional packages and wide scope of customization possibilities can easily blow its final price well above the $220,000 mark. The one you see here, fitted with basic options, sits comfortably at $200,000. 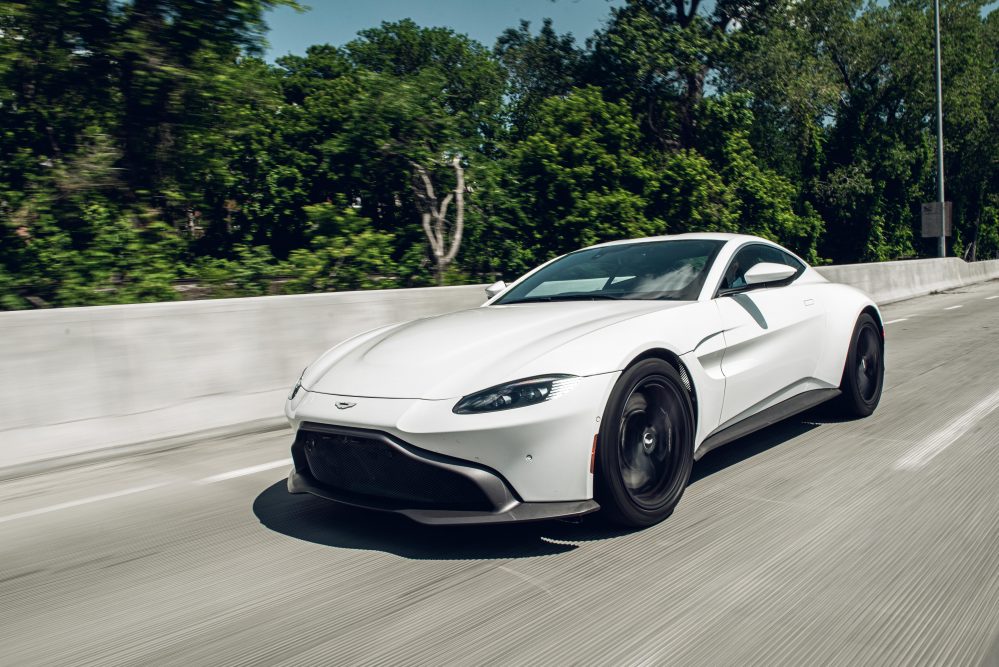 Supercars and high-end sports cars are becoming so obsessed with track numbers they tend to loose their character along the way. Lamborghini seems to be holding onto that torch quite well, however, but even the Audi-run exotic bull-maker isn’t the party machine it once was. 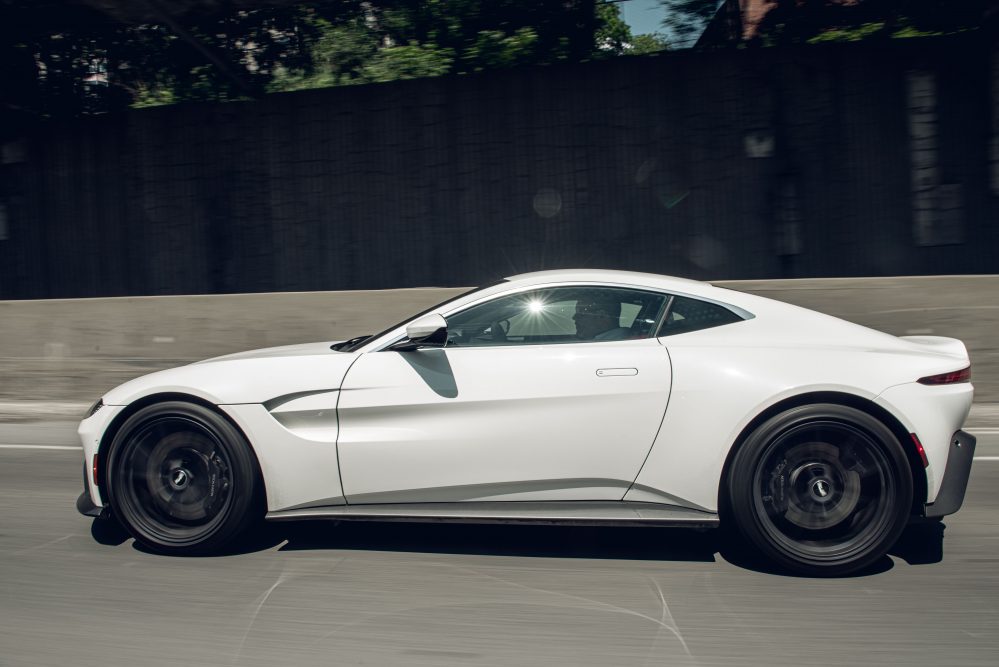 With the Vantage, Aston Martin easily comes through as the carmaker who’s having the must fun building fast automobiles. While it’s true that Aston’s “entry level” sports car now utilizes German components, it’s still very much the British hooligan it has always been. Most importantly, the 2020 Aston Martin Vantage’s main mission isn’t to set lap records on a so-called German racetrack, but rather widen the grin on its driver’s face during the entire time he’s driving it. 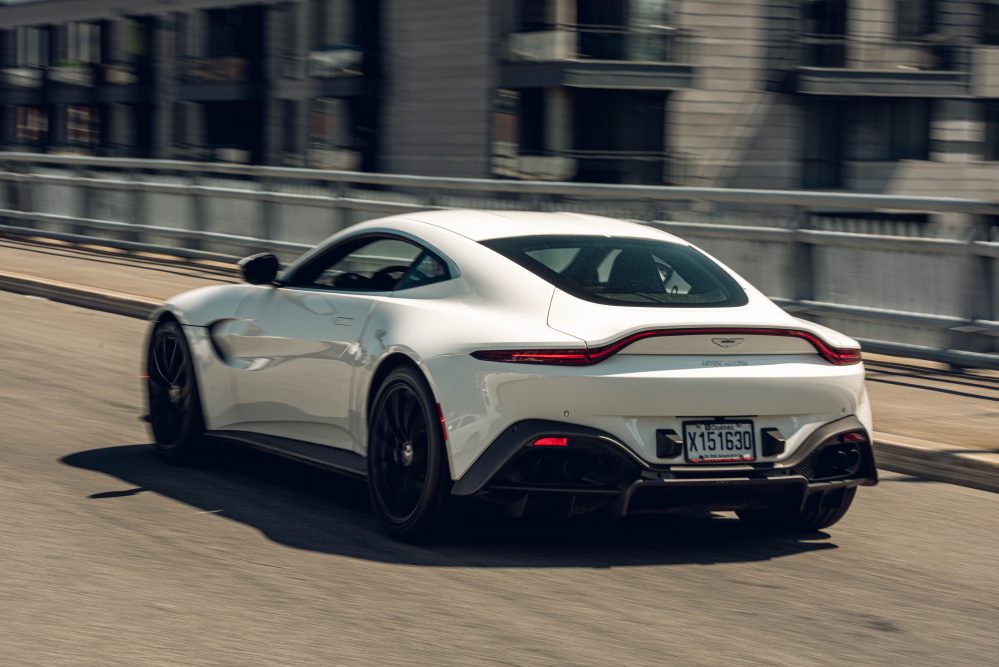 For instance, this is a fast machine, but it doesn’t hang in the low 3-second club like an Acura NSX or a McLaren 600LT. That being said, its forced-fed V8 is still visceral enough to keep you awake, smiling, and begging for more. 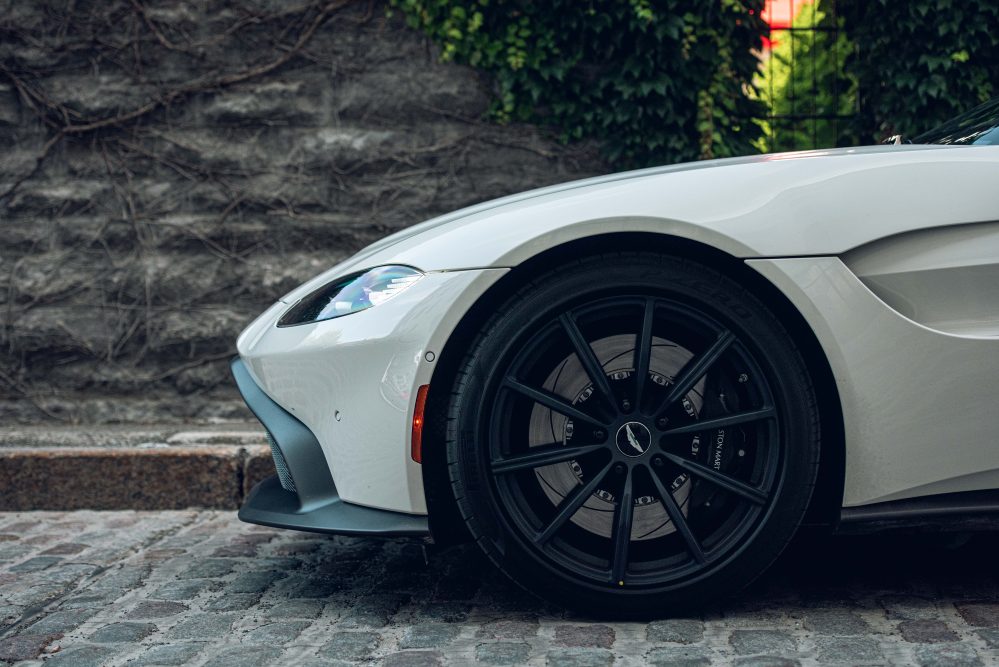 Spending extra time with the Vantage allowed me to fiddle with its available drive modes. There are three at your disposal, all controllable via buttons on the steering wheel, ranging from Sport, Sport Plus and Track. Each mode heavily alternates the car’s driving dynamics, throttle response and transmission’s behavior. 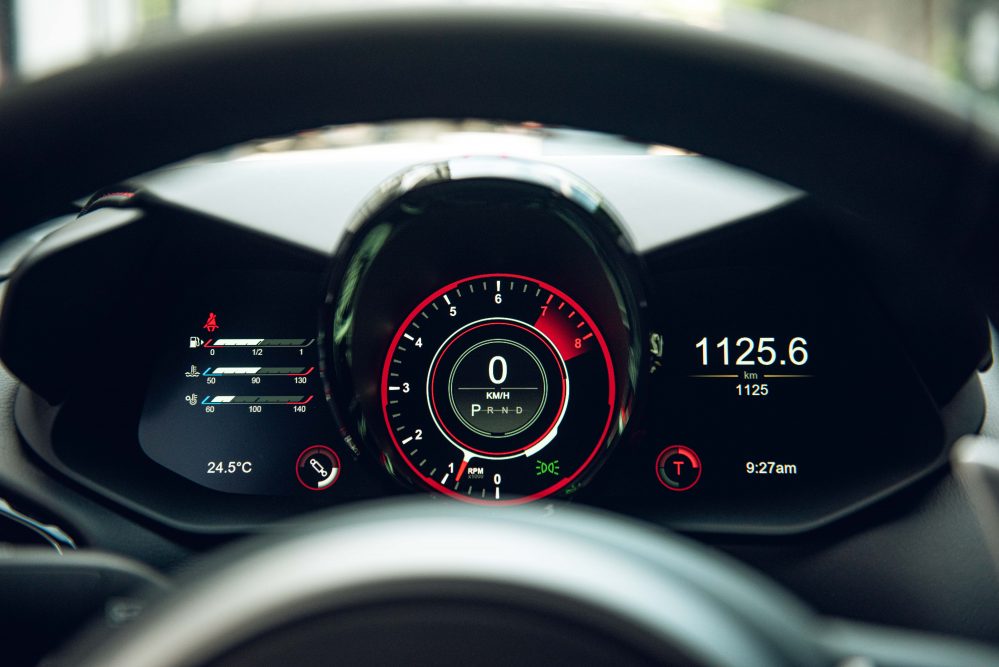 What I particularly enjoy about these modes is their ability to independently adjust the adaptive suspension and the car’s engine mapping. For instance, you can ride around town in a soft suspension setting while still let the engine sing and allow its transmission to hold on to revs longer. 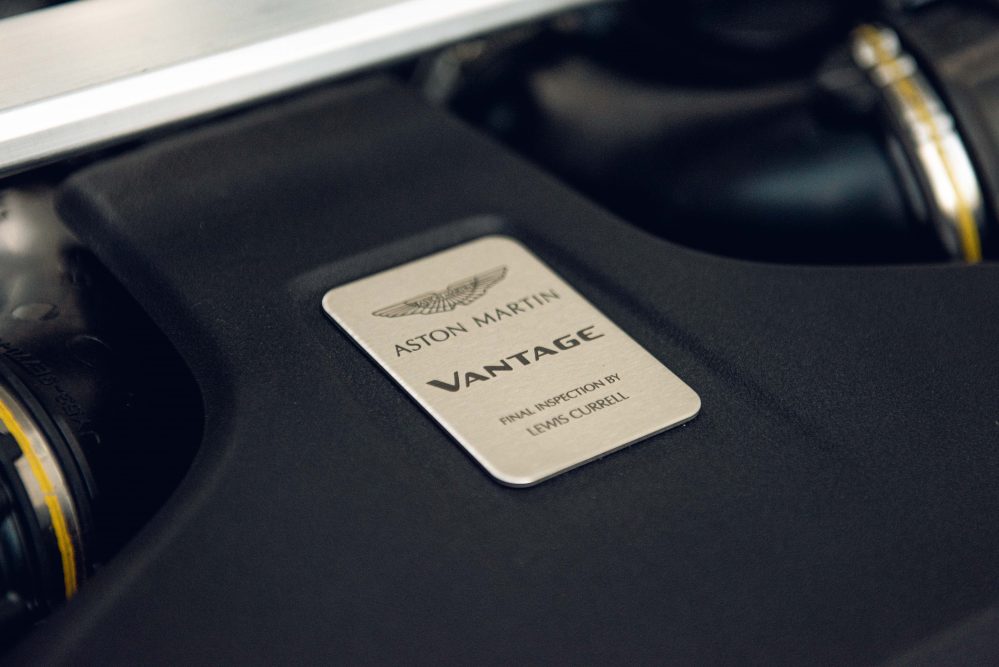 That, sing, the 2020 Aston Martin Vantage does rather well, to the point where you start wondering why it’s so loud. Don’t get me wrong, I’ll take a loud sports car over a silent electric Tesla, but the burbles and pops that come out of this Aston’s quadruple exhaust pipes seem overdone.

Around town, it’s just loud. Push the engine to its rev limiter, however, and it’s an aural symphony of eight pistons running full swing, where things make a little more sense. It’s a sound that can’t be ignored, giving the Vantage the character it deserves. Although enjoyable to listen to, it’s nothing like the highly addictive wail of its predecessor’s naturally aspirated V8, or even the Audi R8’s exquisite V10. 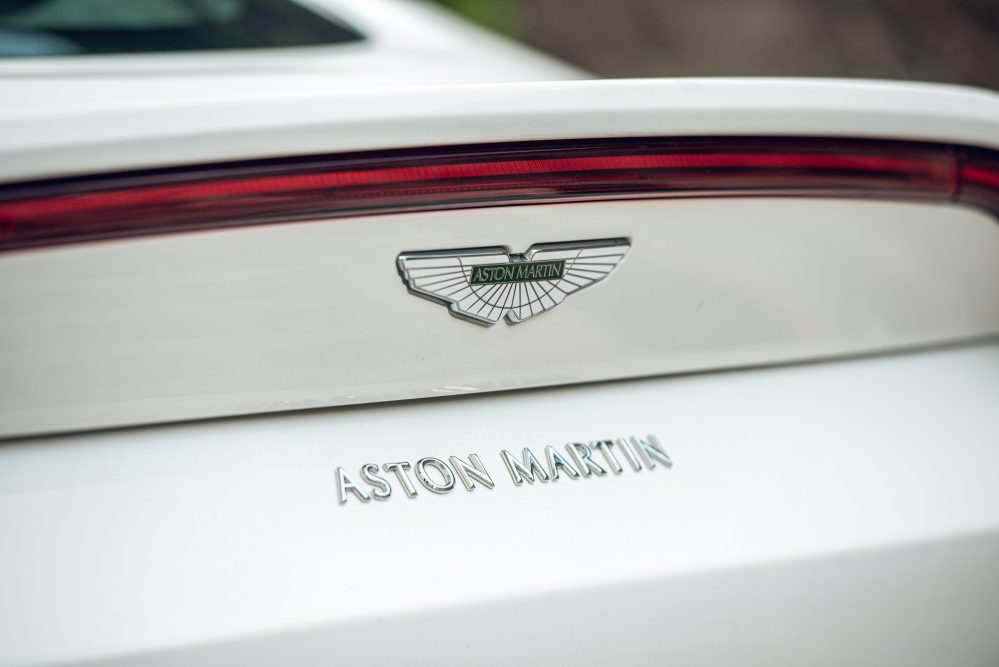 In Track mode, the Vantage constantly wants to wag its tail. It’s easy to become a drift champion behind the wheel of this thing as it’s constantly tempting you to kick out the rear. 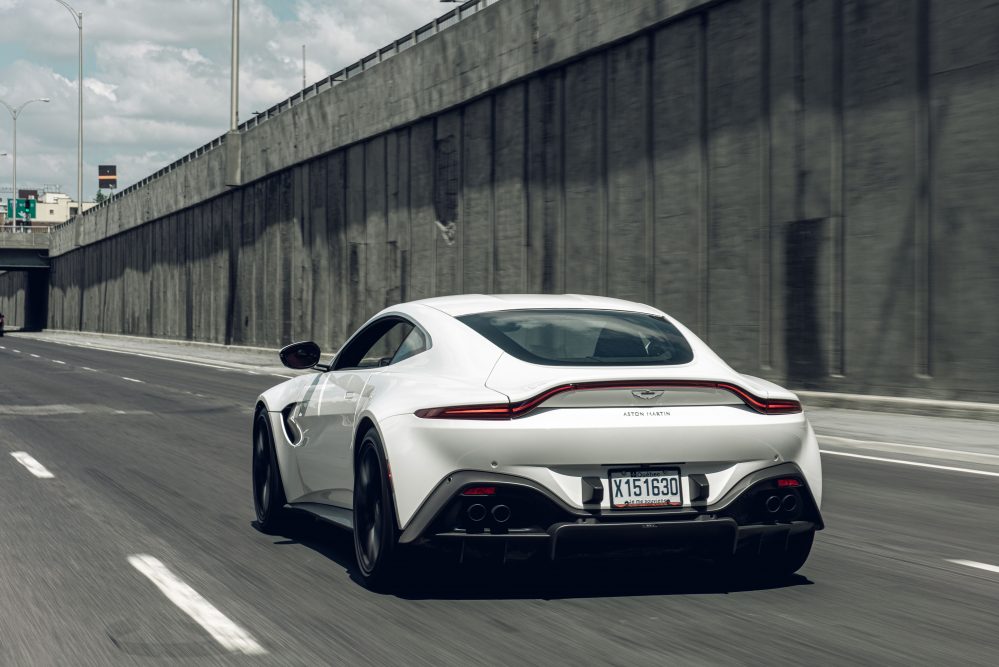 That’s all thanks to its trick limited-slip rear differential, which is an Aston Martin in-house affair. It opens up and changes its settings according to the drive mode you’re in, and it works actually better than most systems of this type by being so seamless and well calibrated. 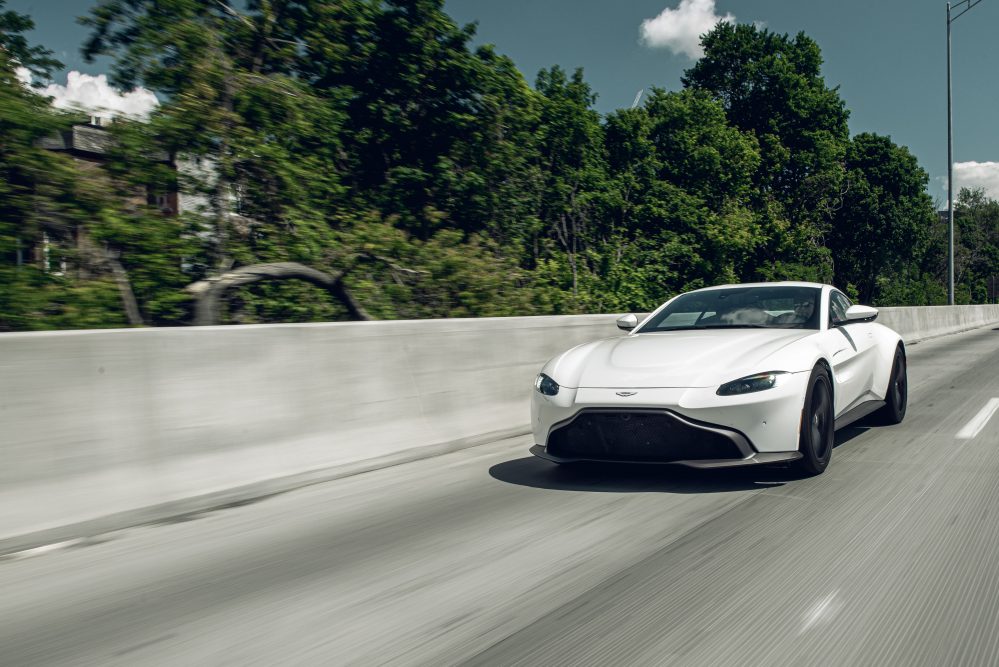 Aston’s chassis dynamics are also superb here, again, set up to provide the maximum level of fun, but also allowing the Vantage to remain compliant around town and still provide a tremendous amount of grip in the corners. The Vantage demands you to play with it, the way a child grabs you by the hand to follow him to the swing set. 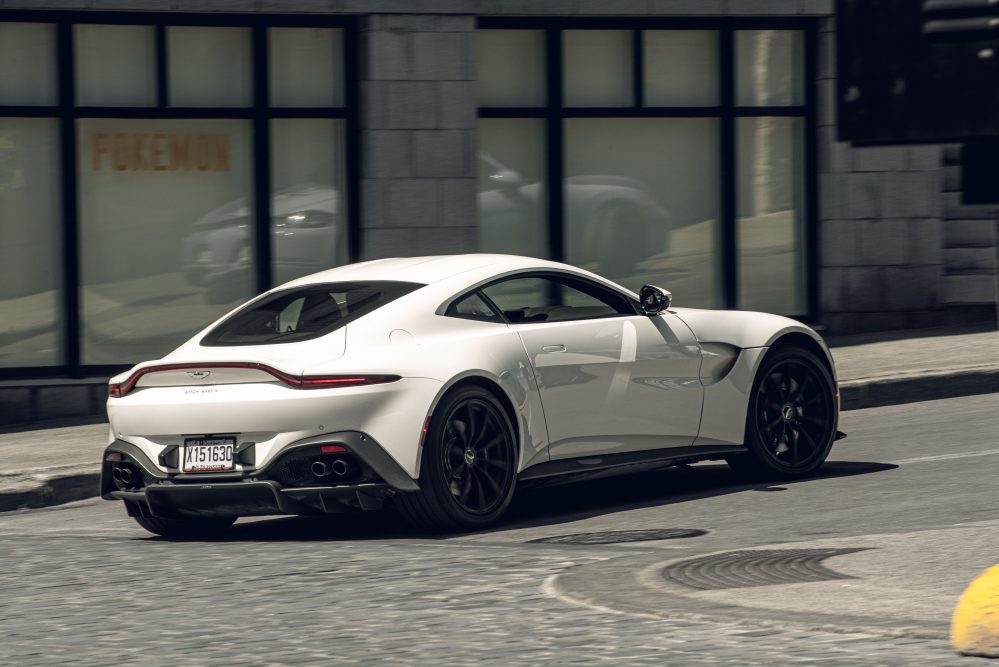 Fun, fast, loud and always obnoxious, the Vantage will never win a drag race against a comparatively priced Audi R8, but it requires more input, more alertness, which in turn makes the experience more memorable. 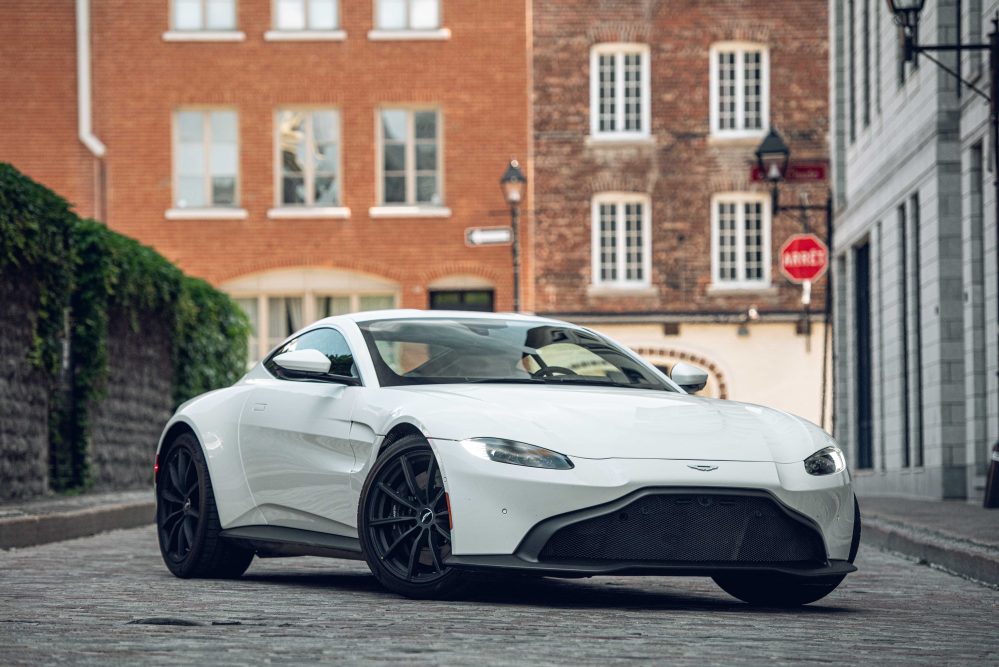 Aston Martin’s biggest challenge with the Vantage is to maintain its renowned exclusivity while incorporating Mercedes-AMG drivetrain and technology. In that respect, its cabin design works overtime to convince you you’re in fact driving something unique and special, and it works, but only to a certain extent. 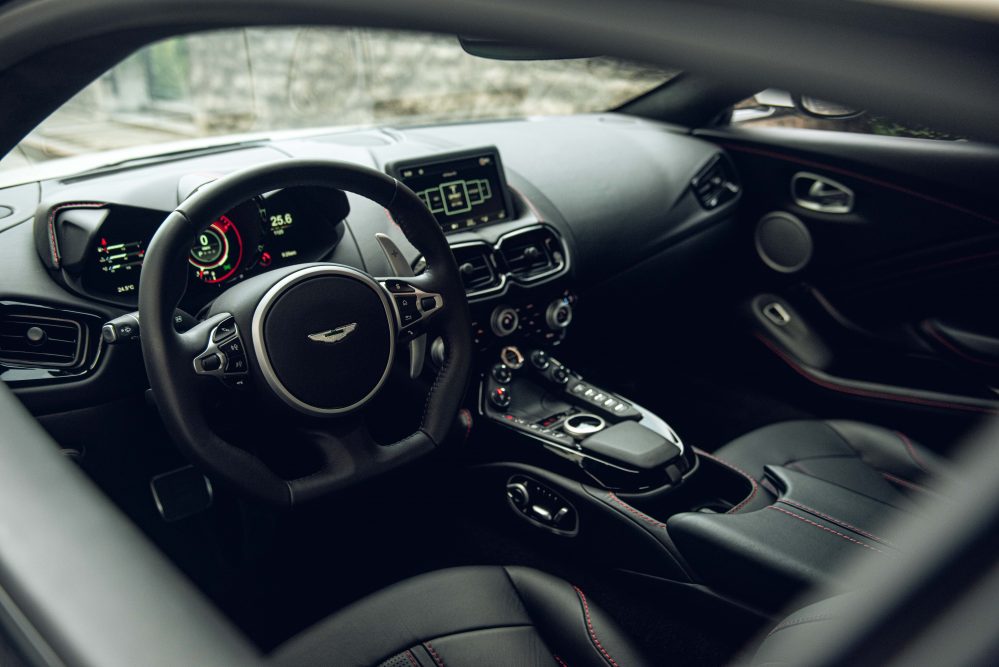 I’m a personal fan of its futuristic snug cabin with its array of buttons on the center console. I also love its enormous paddle shifters that are located directly on the steering column and not on the steering wheel itself. It all looks fresh and modern, the way a Vantage of the 21st century should look. But it’s the amount of shared components with Mercedes-Benz that disappoints, somewhat diluting this car’s uniqueness. 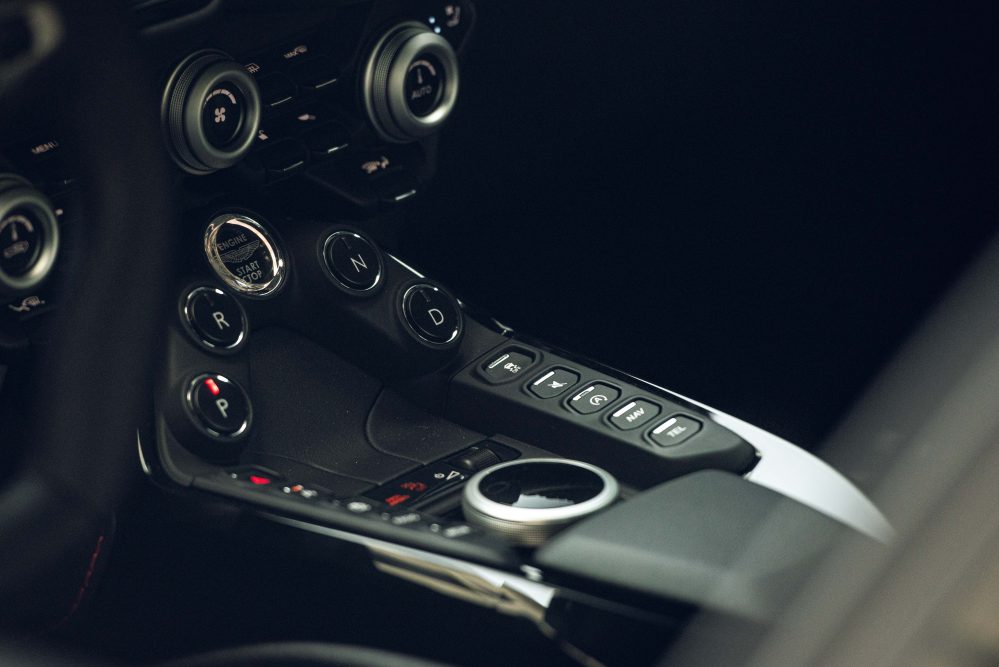 The worst is by far the infotainment system which is a relic of old stuff Mercedes-Benz used to manufacture. The system itself is controlled via the same infuriating center knob dial. Graphic quality is low and menus are irritatingly unintuitive. In case you’re wondering, no, a Vantage doesn’t come with Android Auto or Apple CarPlay connectivity. 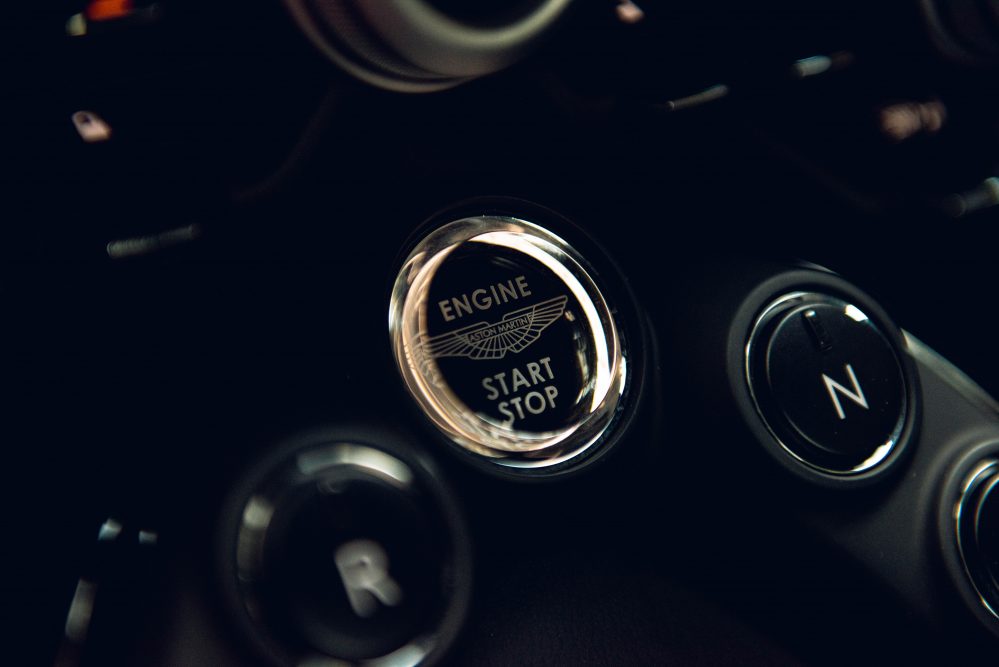 And don’t expect the same level of fit and finish as something German at this price point. In that respect, the Vantage is a bit disappointing. 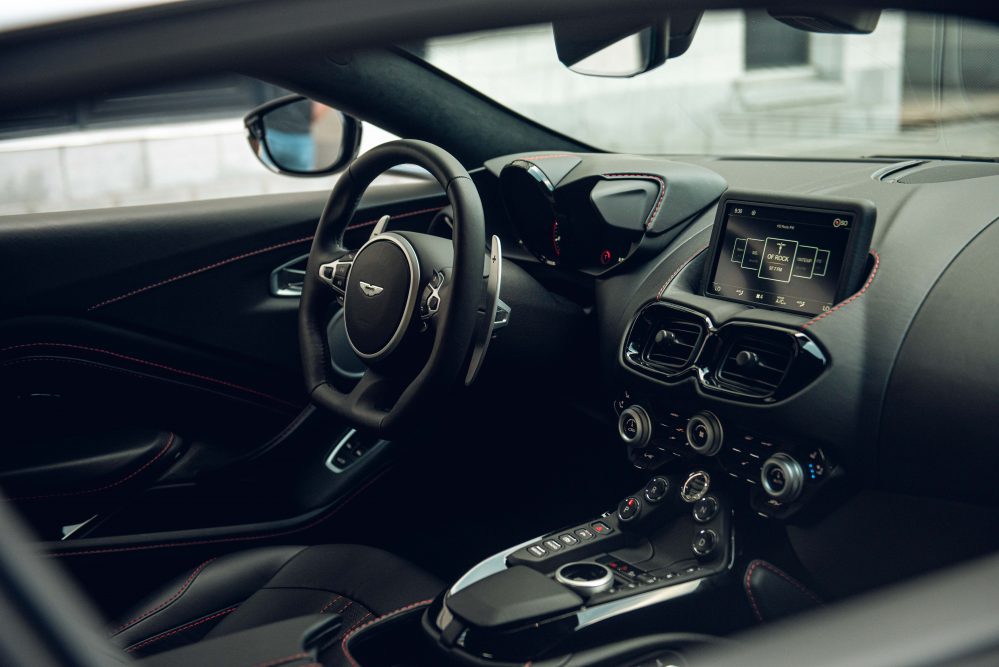 But then, there’s a sense here that Aston isn’t trying to take on its competition head on, but rather come through as its own unique beast that dances to the beat of a different drum. Exclusivity has always been an Aston Martin strongpoint, something the Vantage still somehow manages to harvest rather well, even with all the Mercedes switchgear and chimes. 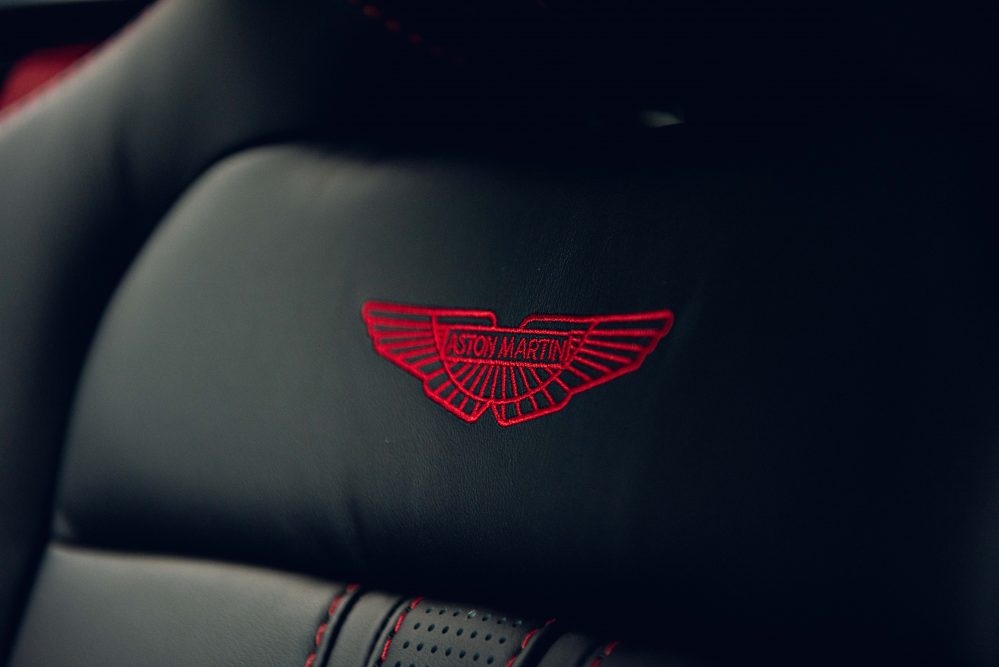 After all, anyone can pull up to a party in an AMG GT or a Porsche 911. The one arriving behind the wheel of an Aston Martin is a special kind of person, one that fell in love with the Vantage’s beautiful looks, charming personality and underdog attitude, but also an individual who refuses to follow the crowd.