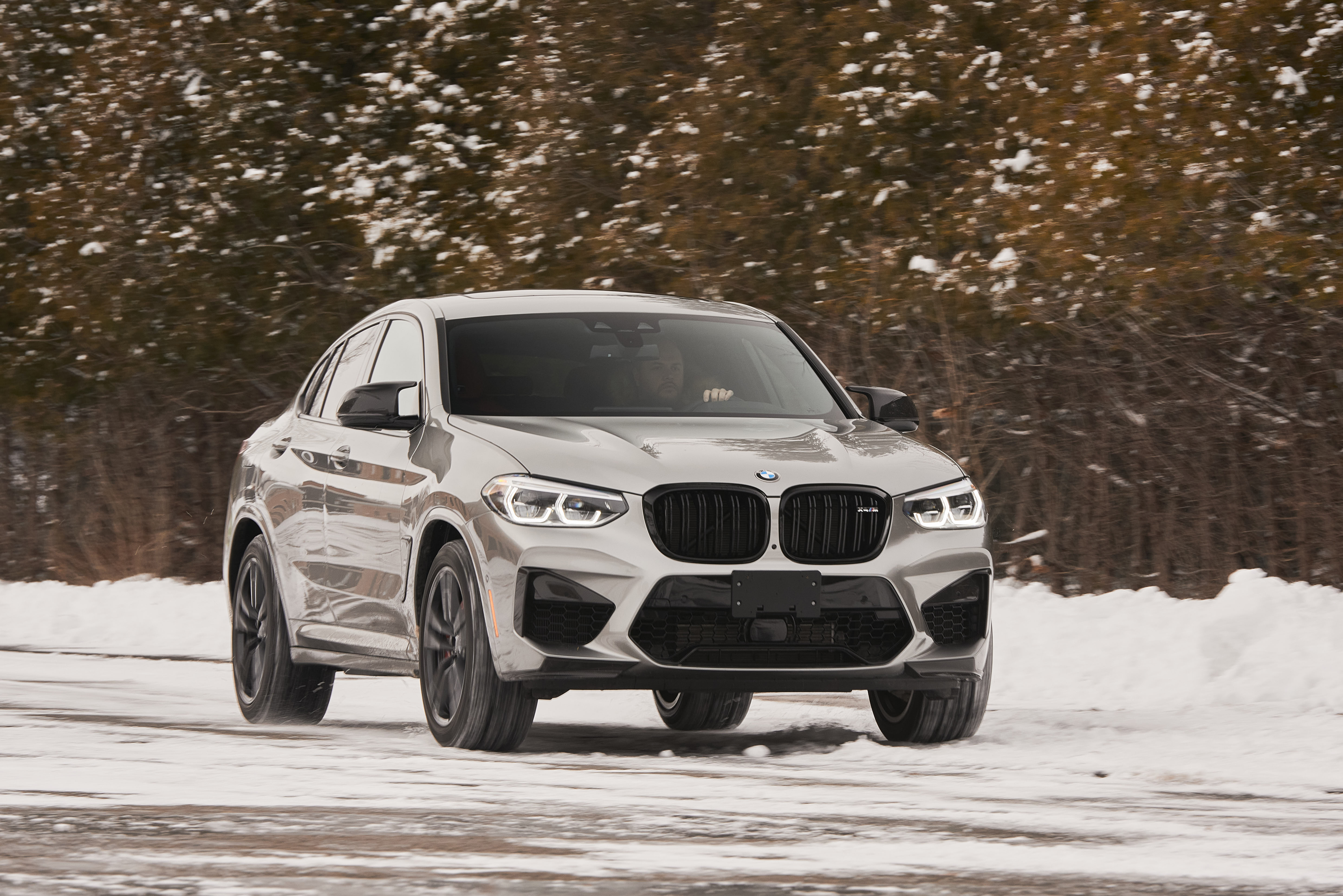 The 2021 BMW X4 M is a carbon copy of the BMW X3 M but with a more coupe-like body. And there’s absolutely nothing wrong with that, because when I drove the X3 M last winter, I had said that it was so good that it messed with physics. I mean, it was basically a BMW M3 on stilts. And, it’s exactly the same story for the X4. I could therefore be lazy, copy that X3 article and change the number for a four. But as you know, that’s not how I roll.

For That “Special” Customer 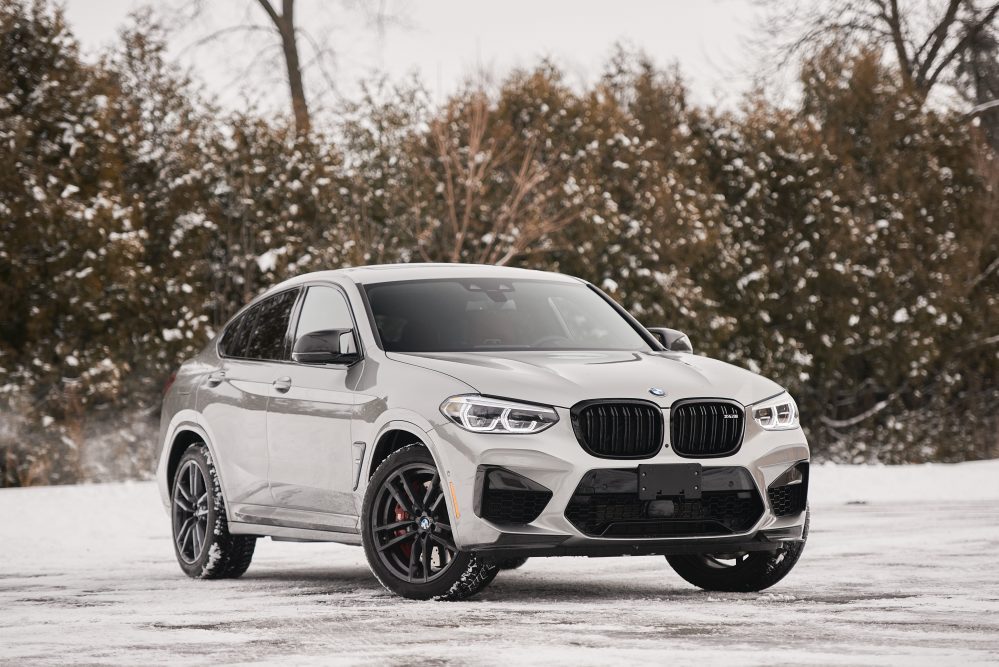 I never quite understood this whole coupe SUV trend. But a good friend of mine, who worked for a long time in a BMW dealership, explained to me that vehicles such as the 2021 BMW X4 M attract a very special kind of customer. Apparently, when that customer walks into the showroom, this is exactly the kind of vehicle they want. Fine. But I still don’t get it. BMW sells on average 70,000 more X3s than X4s each year. Seventy thousand! How special can that customer be? 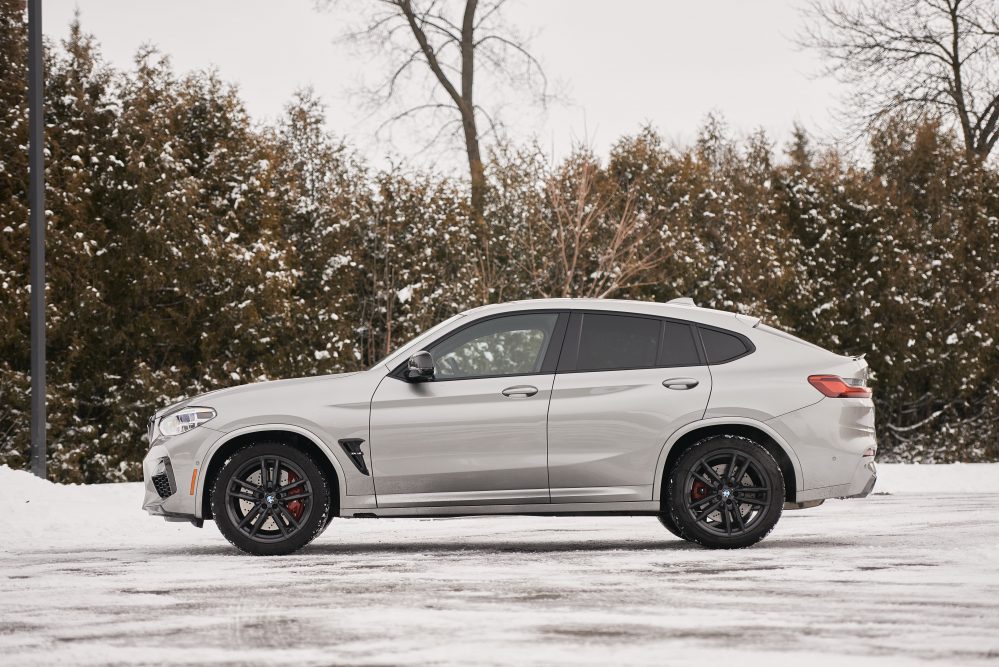 Nevertheless, whatever you think about this thing’s looks (I don’t like it), the important thing to remember is that its mechanicals and driving dynamics (which I’ll get back to in a bit) are identical to the X3 M, which is fantastic if you’re a fan of BMW’s Ultimate Driving Machine promise. These things are just as if not more focused than some sport sedans currently on sale, which will render your knowledge of physics obsolete. 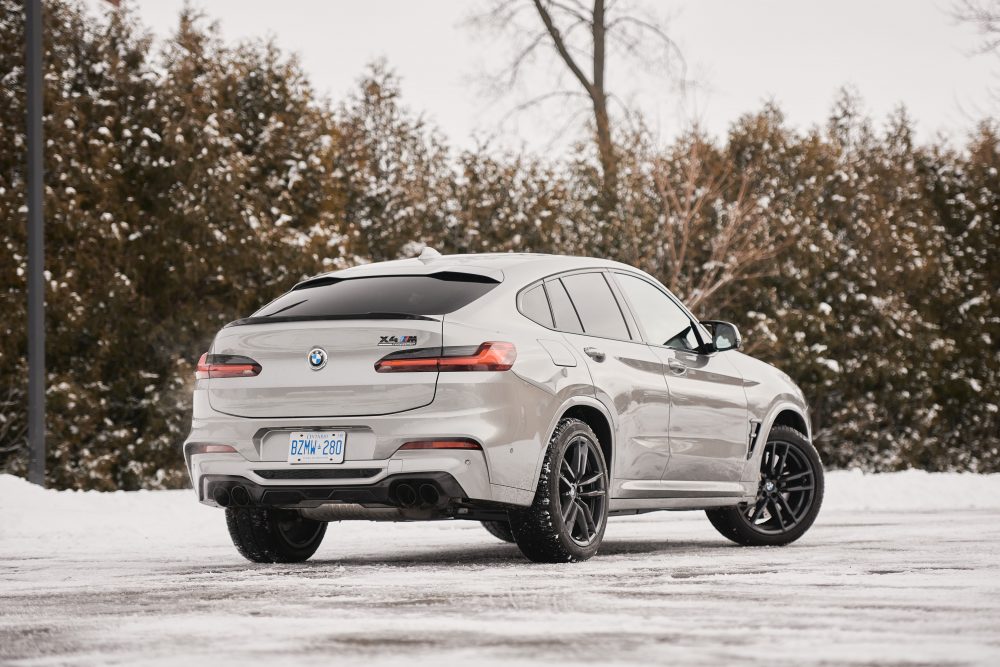 Power comes from BMW’s absolutely insane 3.0-liter twin-turbocharged inline six, also known by the BMW faithful as the S58. It’s still the most powerful production BMW six-cylinder ever made, designed like a race engine with its forged crankshaft, connecting rods and pistons. It also uses a shorter stroke than the engine found in the M440i coupe. This allows it to rev higher, from 7,000 rpm to 7,300 rpm. But unlike the M440i’s single turbo setup, this is twin-turbocharged. 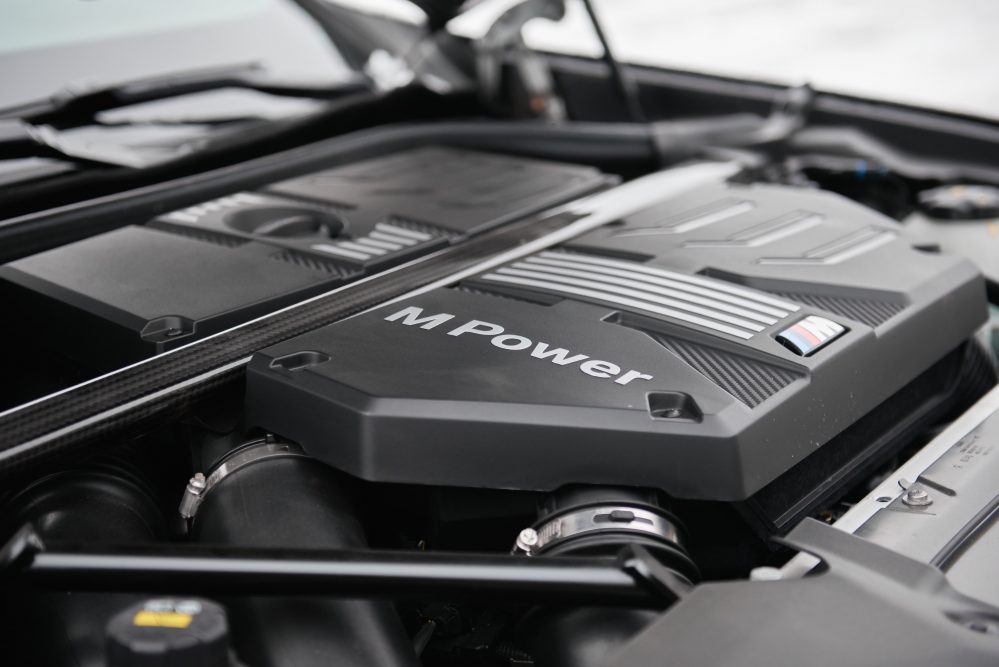 Final output for the “standard” X4 M is 473 horsepower and 442 lb-ft of torque. However, in the Competition model you see here, boost pressure climbs from 17.4 to 18.9 psi, for a total horsepower figure of 503. This, along with an eight-speed ZF-sourced automatic gearbox and BMW xDrive all-wheel drive system, allows the 2021 BMW X4 M to sprint from 0- 100 km/h in 3.5 seconds. Imagine that. 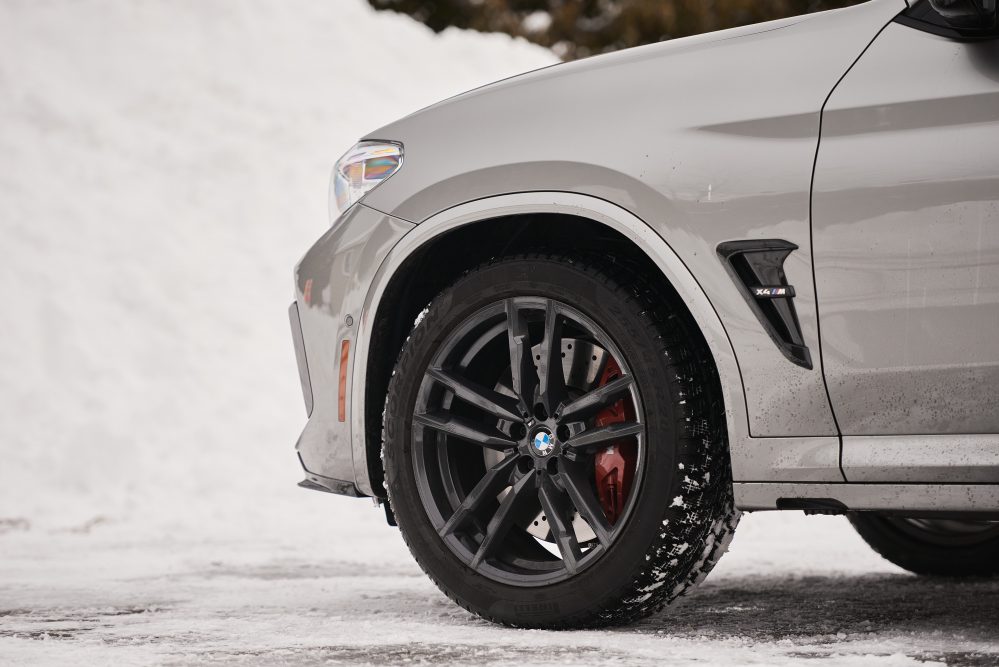 How Do You Want Your Speed? 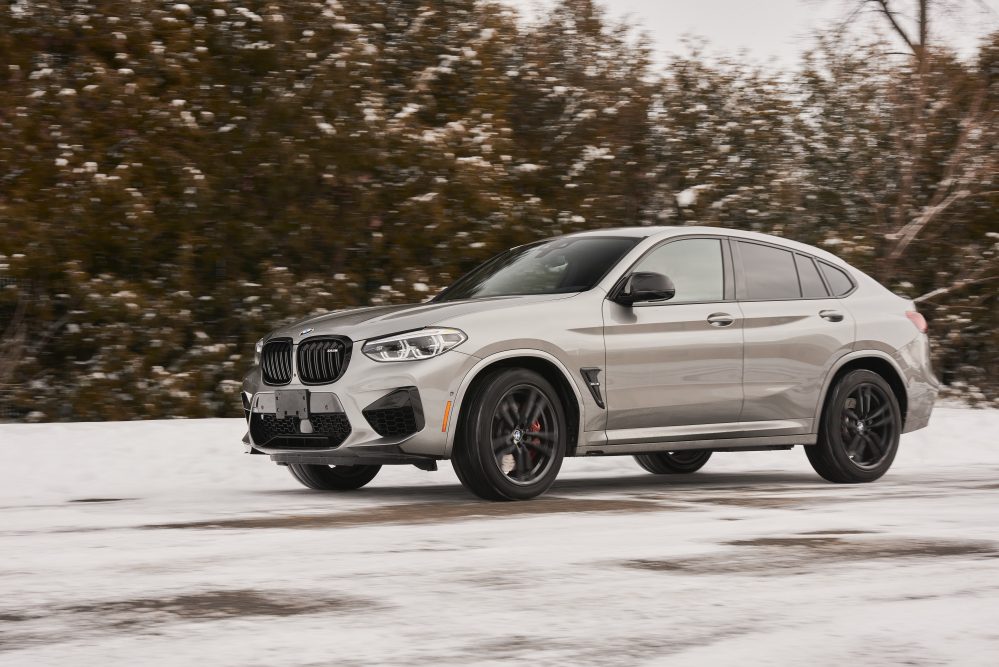 At this point you’re probably expecting me to write a super positive review about the 2021 BMW X4 M because one, I’m a BMW fanatic (I kind of am, yes), and two, I just bought an E39 540i. But while I admire this weird-looking SUV for its god-like levels of performance, it also makes me sad about what the brand has become. 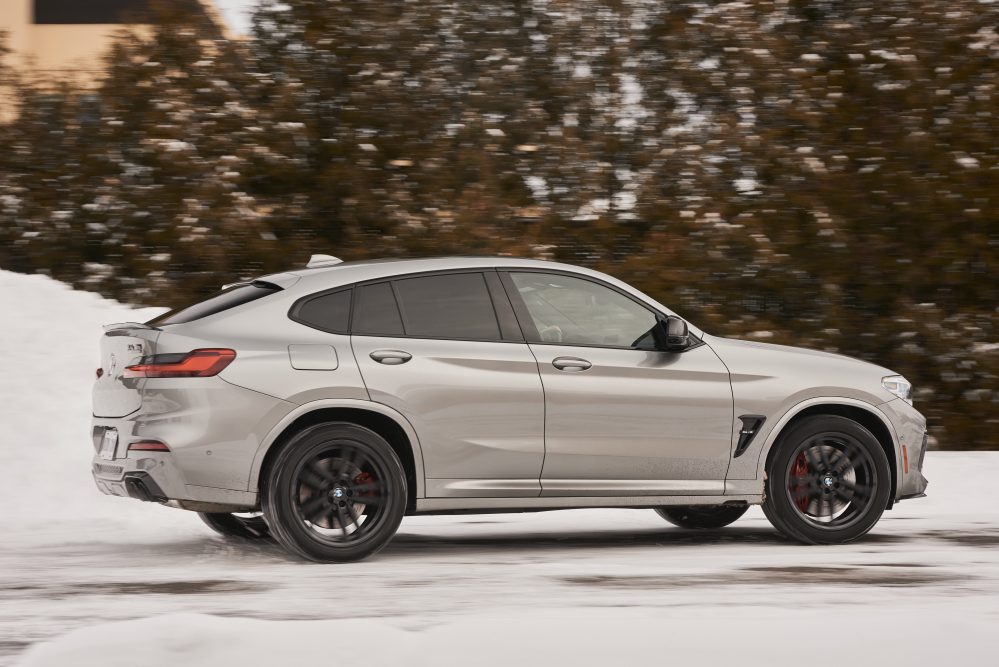 With electrification around the corner, many carmakers are witnessing the end of an era. And for some, like BMW, who have spent the last half century centralizing their ethos on performance and driving experience, the switch to cleaner propulsion methods comes in like a solid punch in the gut. 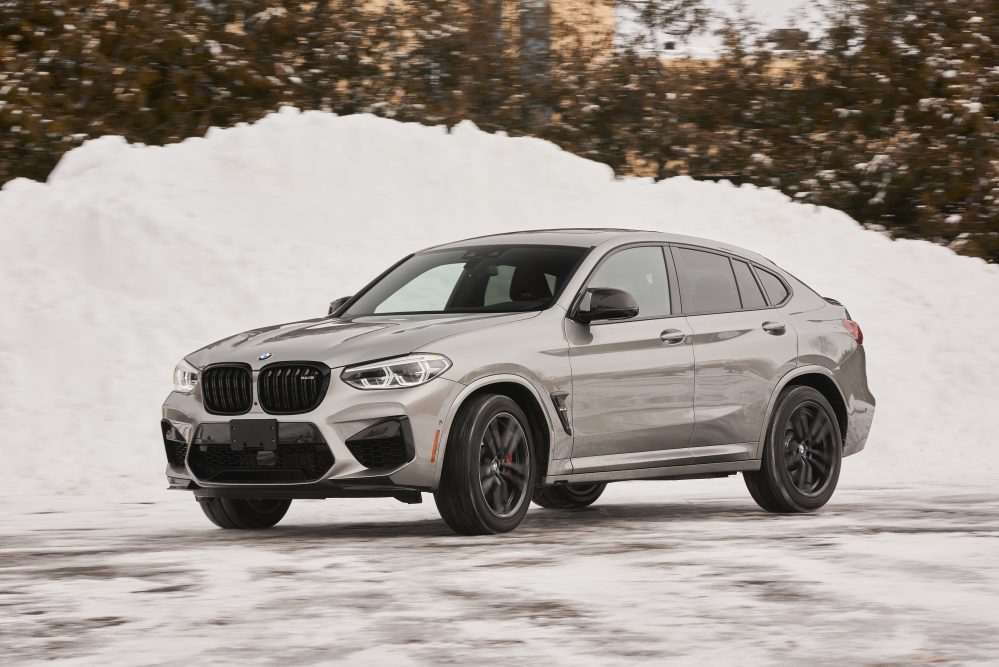 We’re sensing that while companies like Tesla or even Genesis are breaking new ground by thinking outside the box and adapting to new consumer realities, BMW looks like it’s stuck somewhere between its past and its future. The only way it seems to be able to cope with that is by making its vehicles increasingly faster and more powerful. 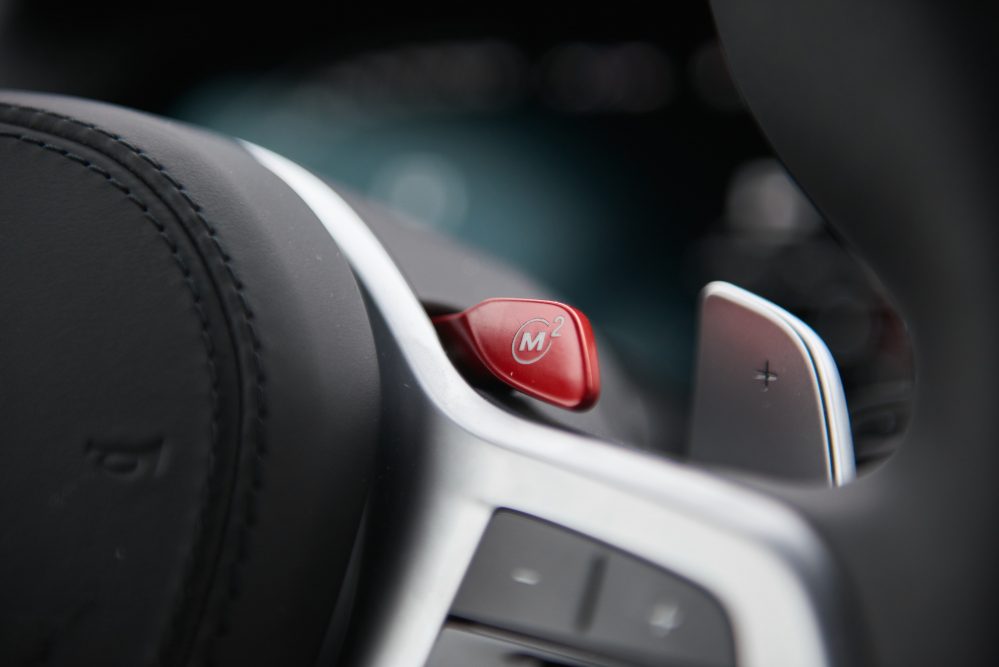 That all being said, there’s no denying how ridiculously quick and capable this compact crossover is. Like the rest of the modern BMW M cars, the X4 M allows you to tailor its performance to your liking. There are two little red M buttons located on the steering that allow you preconfigure your settings. For instance, you can opt for a full rear-wheel drive setup, or all-wheel drive, because yes, like a BMW M5 or M8, this can disengage its front axle and exclusively send power to the rear wheels. 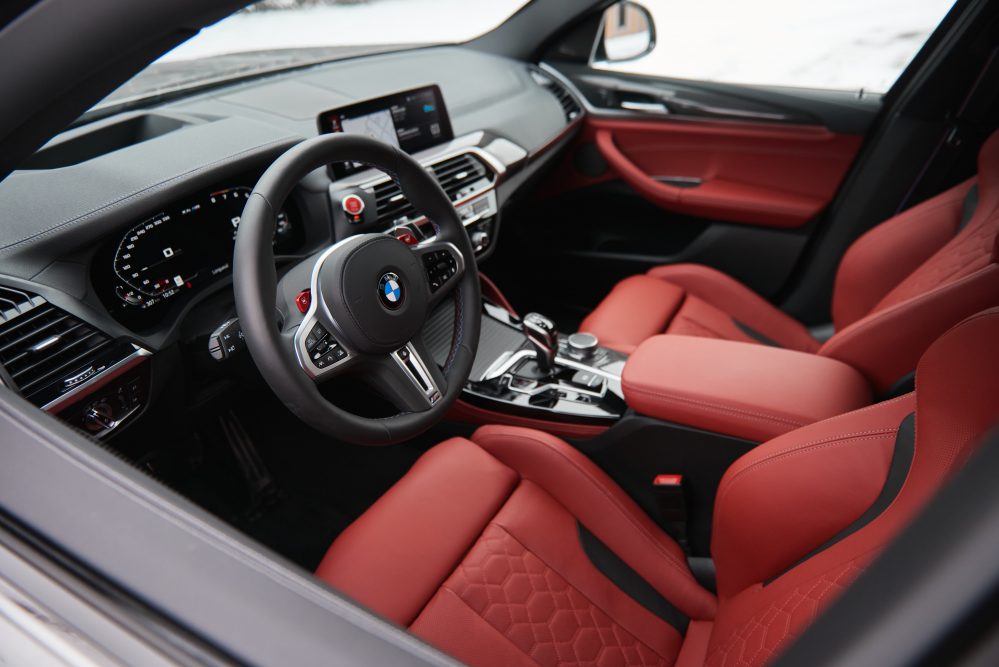 Then there’s the added complexity of the menus, which, I find goes a bit far, but nevertheless gives you the maximum level of flexibility to access the car’s performance. In Track mode, the car’s infotainment system even shuts off so you can focus on your driving. I’m not sure how many BMW X4 owners will actually do that, but I did try this vehicle on a nice warm track down in Palm Springs California, and it did rather well. 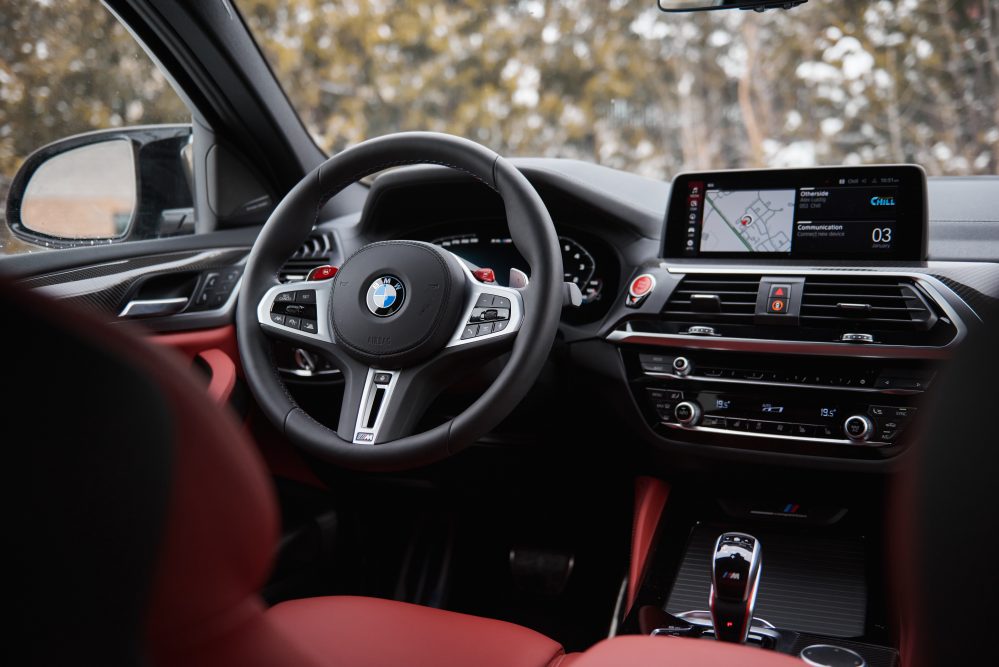 It’s actually that sure-footedness that makes the X4 M feel like it doesn’t belong in our world. Crossovers and SUVs always tend to feel high off the ground a little clumsy due to lifted center of gravity and an unbalanced weight distribution, yet, this feels fine. The level of confidence behind the wheel is just as if not higher than in BMW’s sport sedans. And that’s fantastic. Although be aware that the ride is firm. If your bones are already falling apart, maybe this thing isn’t for you. 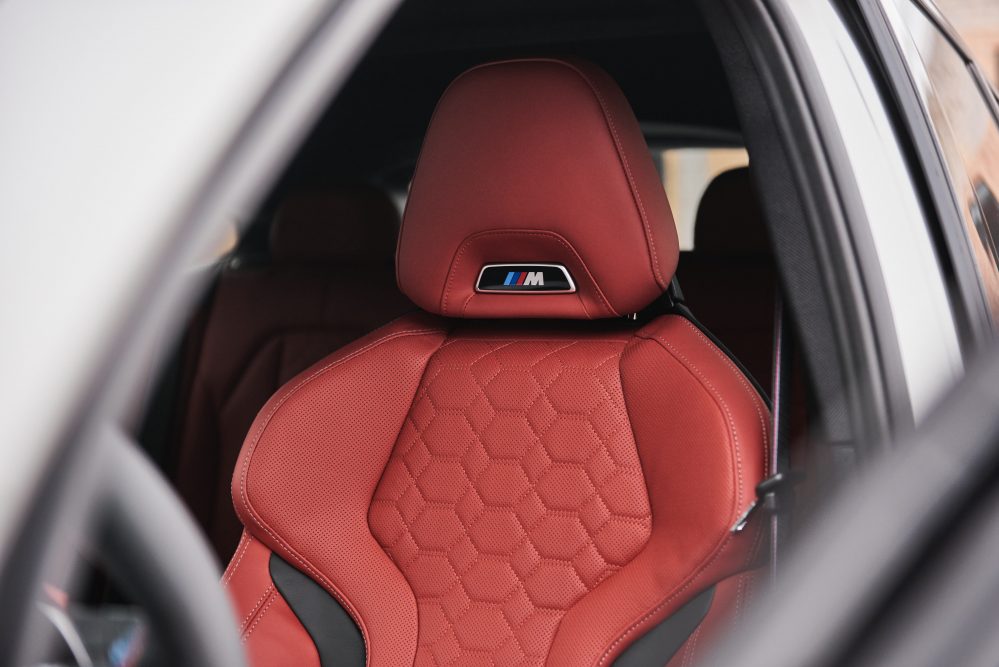 Power from that inline six is constant, plentiful and urgent. It just never runs out of steam. And the moment you gun that throttle, it picks up the right gear and just goes. There are no delays, no weird torque curves or even better, very little electronics to ruin the fun. Meanwhile, the X4’s cabin is filled with expected BMW common sense. Ergonomics are spot on, material and build quality are class-leading, those large M bucket seats feel a little tight around the hips, but look and feel fantastic during hard cornering, and the infotainment system still puts many others to shame due to its user-friendliness and quick-responding software. 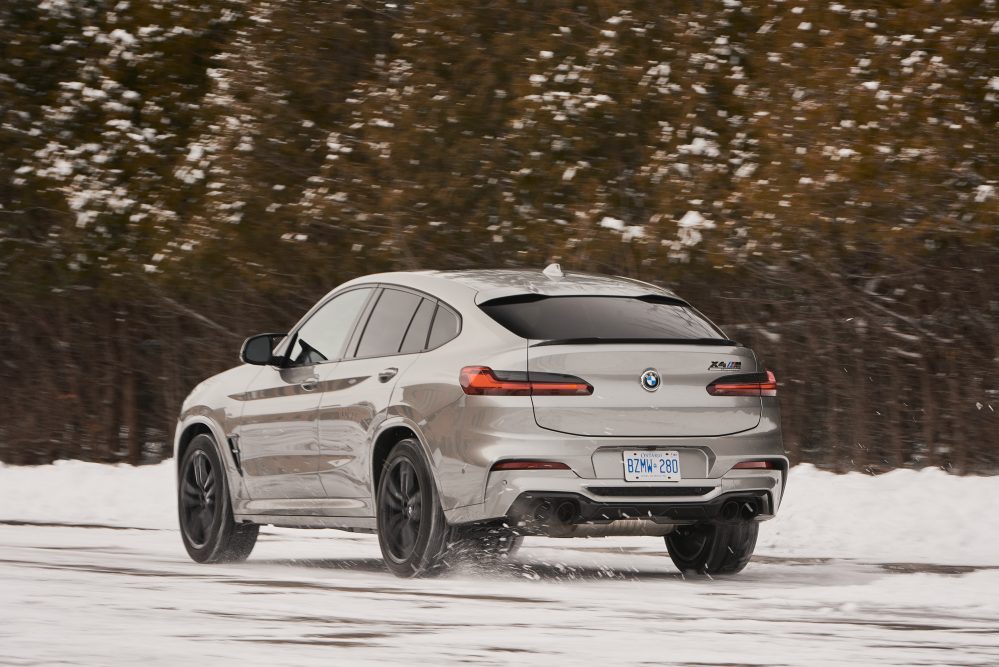 The 2021 BMW X4 M is therefore yet another superhuman sport utility vehicle that’ll out accelerate many sports cars while still carrying some of your cargo. Fine, it’s a bit less practical than an X3, but for some people, this works. As for me, I continue to believe vehicles like this one have no real purpose in the world. The X4 M then is definitely is targeted at a unique kind of costumer. But it’s one BMW has managed to capitalize on all while remaining true to its performance roots.