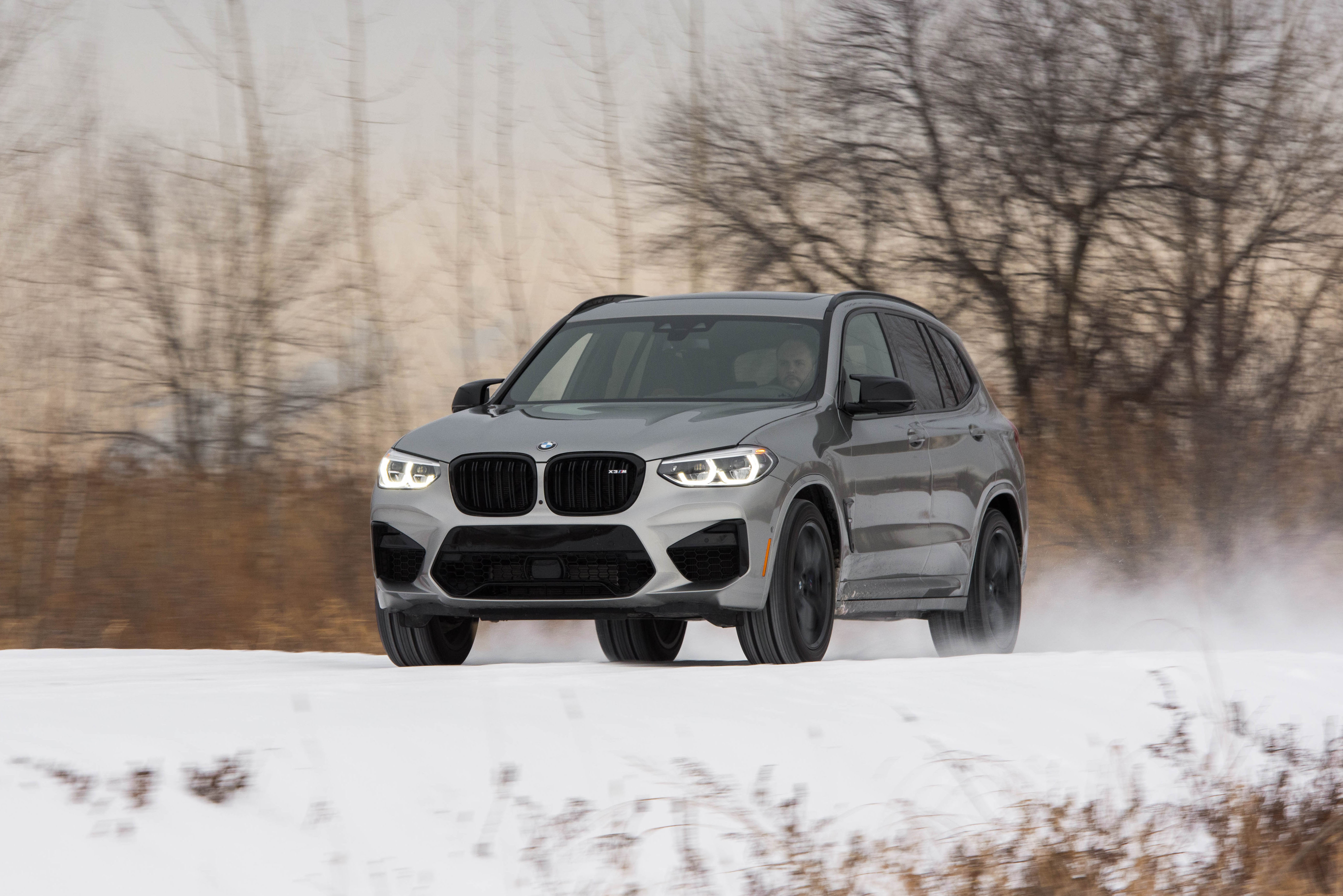 If you count yourself among those that claim BMW has lost its verve, you’ve clearly not driven its latest products. In case you haven’t been following, BMW is back with a newfound mojo, reaffirming itself as the Ultimate Driving Machine with great handling and stupidly fast cars and SUVs.  We’ve seen very capable, driver-involved products being released by the brand in recent years, notably the Toyota Supra and BMW Z4 twins, the BMW M2, and the high velocity BMW M850i, one of the fastest automobiles I have driven on this blog. 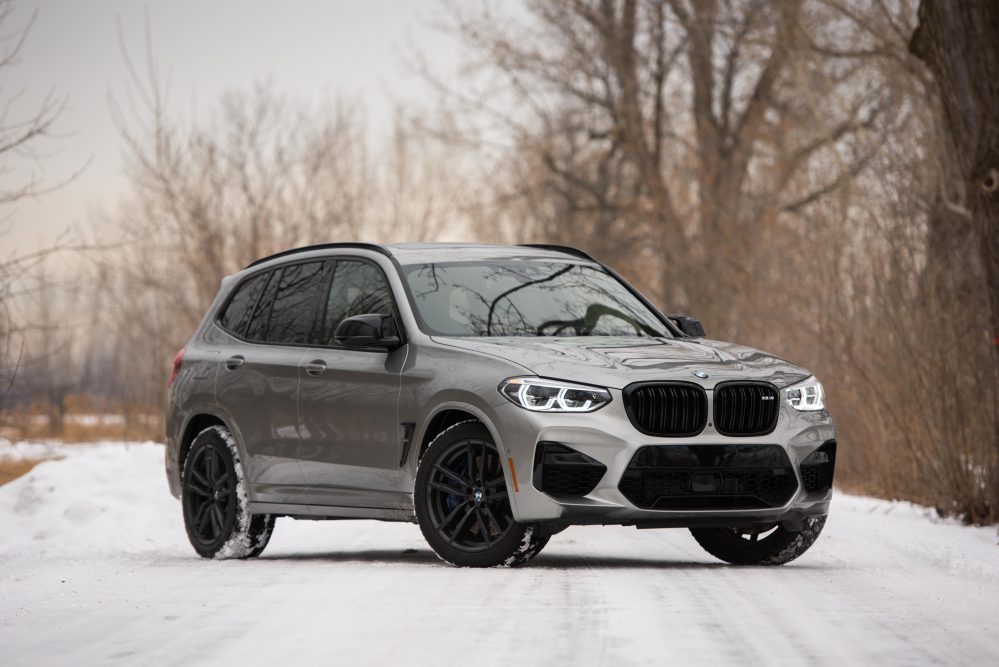 One area where BMW is not excelling these days, is styling. You’re all aware of what I think of the ostentatious grille on the latest 7-Series or the new look of the BMW X5. BMW may be killing its main German rivals from a technical standpoint, but their products are not exactly attractive.

The 2020 BMW X3 M Competition, on the other hand, doesn’t look all that bad. While, yes, its nostrils are gigantic, it doesn’t go down the same “is there something stuck in my teeth?” path as its siblings. In all fairness, although it does look somewhat dorky with its high roof, long schnoz and stubby rear end, the X3 is also kind of cute. So it works. 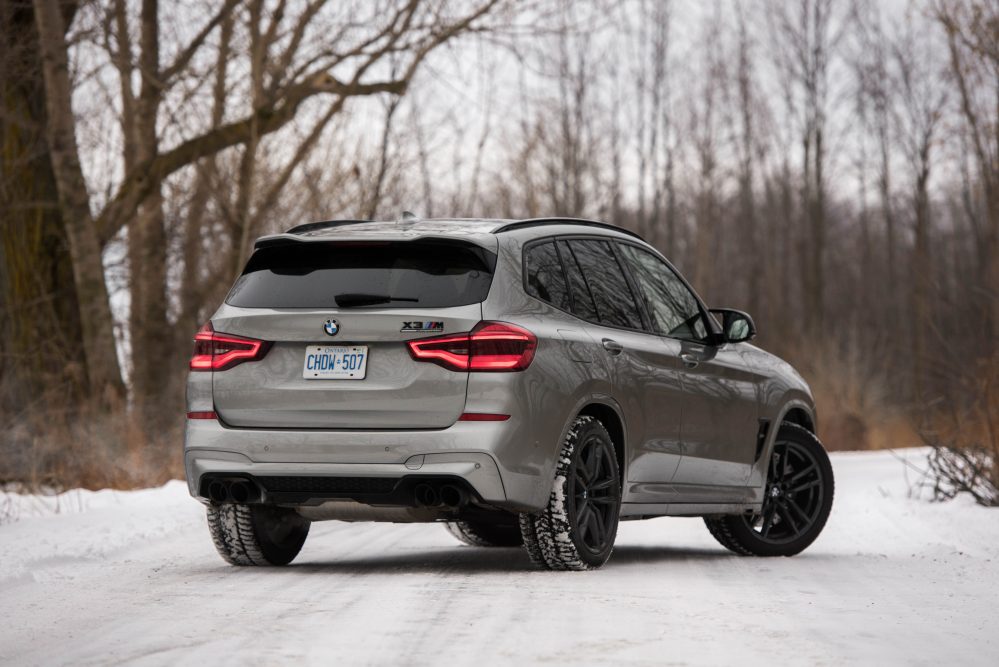 What you need to know is that this is currently one of the most athletic sports utility vehicles currently on sale. Forget lame interpretations of the stuff like a Ford Edge ST or an Infiniti QX50. Hell, even the European alternatives like the Mercedes-AMG GLC 63 or Jaguar F-Pace SVR don’t measure up to this thing’s precision. The X3 M’s only main rival – at least from a driving standpoint – is the Alfa Romeo Stelvio Quadrifoglio. 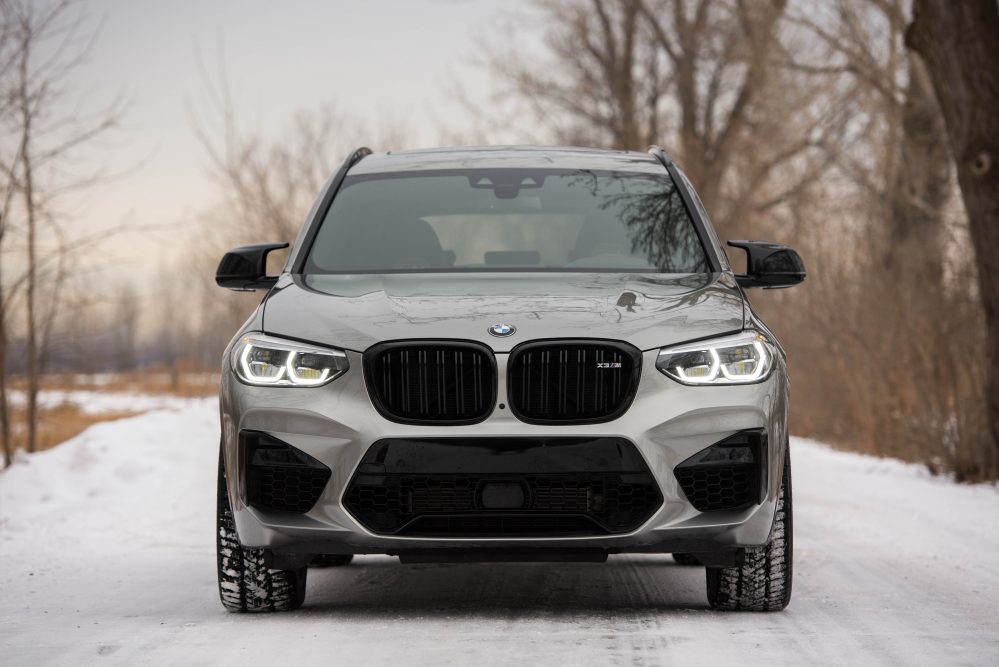 Driving a 2020 BMW X3 M Competition doesn’t feel like driving a very fast SUV. It feels likes driving a sports sedan, which makes you realize how far automotive engineering has gone. Forget physics, this thing eats them up alive and farts ’em back out its quad exhaust.

I’ll get back to the way it drives in a bit. Here’s a bit of a technical backgrounder first.

For starters, this is not a “fake” M vehicle like, say, an X3 M40i. It’s a real M SUV. This means it gets multiple chassis braces, stiffer springs, retuned bushings, and retuned adaptive dampers, among other performance enhancing modifications. 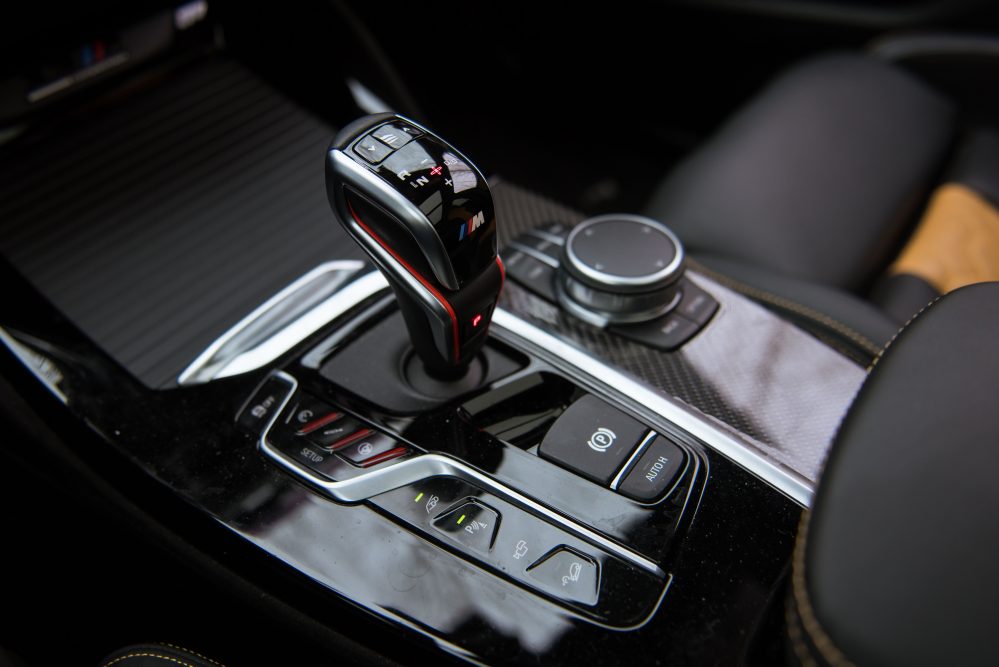 It then uses the same eight-speed ZF automatic transmission and electronically controlled limited-slip rear differential as the almighty M5. In other words, its all-wheel-drive system can transfer torque fore and aft to assist the SUV to go where it’s pointed. 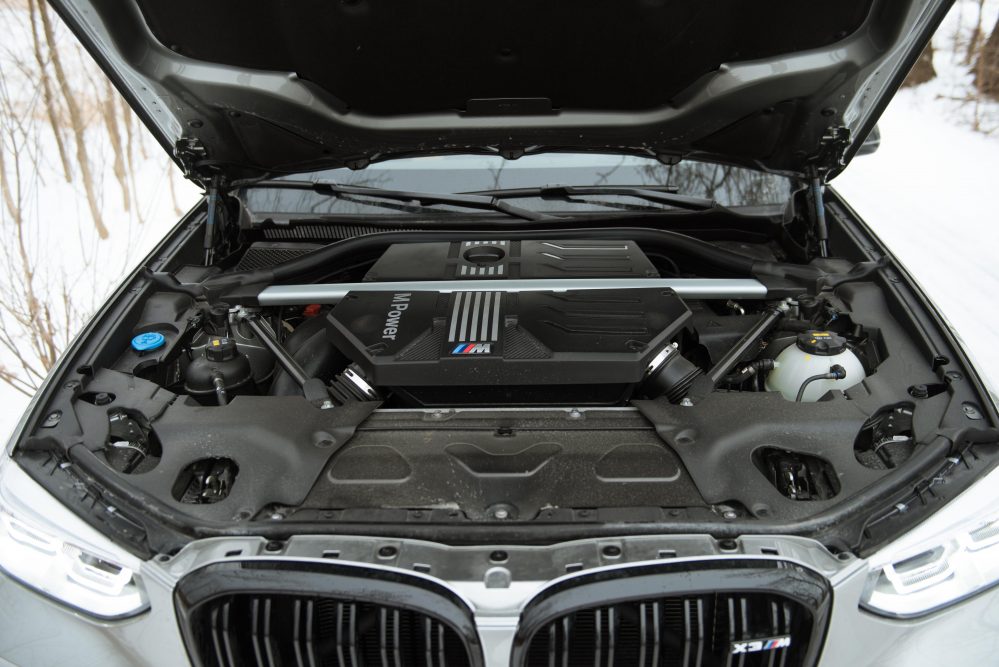 Finally, there’s the engine. Yes, it’s a 3.0-liter twin-turbocharged inline six, but BMW claims it’s 90% all new. Code-named S58, it’s currently the most powerful production BMW six-cylinder ever made. It’s also the strongest thanks to a forged crankshaft, connecting rods and pistons. It uses a shorter stroke than the engine found in the X3 M40i and M340i sedan. This allows it to rev higher, from 7,000 rpm to 7,300 rpm. 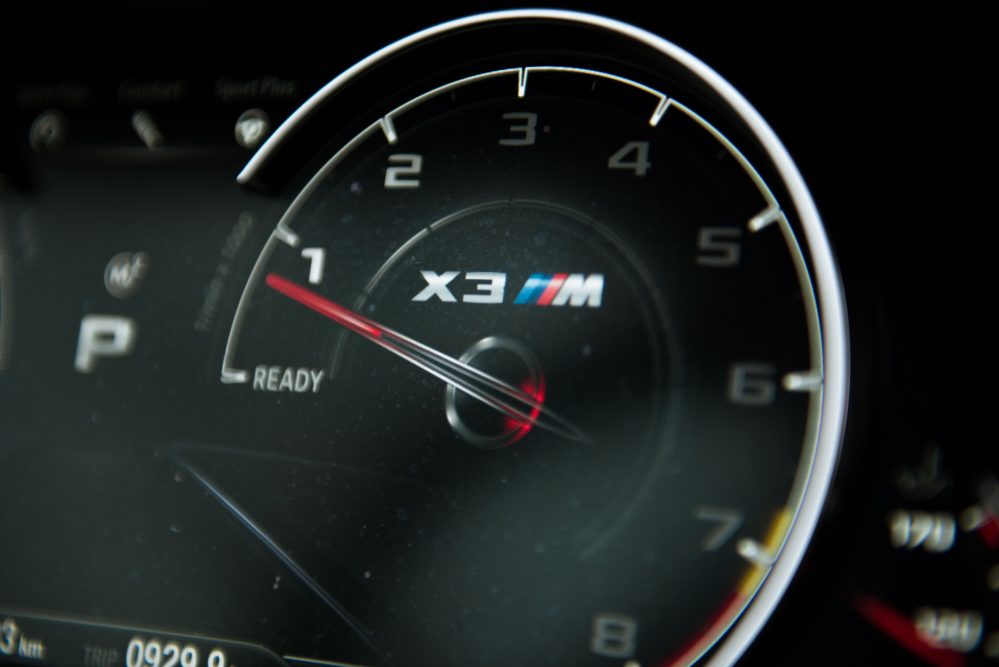 It’s also twin-turbo, contrary to the one found under the hood of the Supra which utilizes a single snail. While the standard X3 M boosts at 17.4 psi, the Competition model you see here cranks things up to a solid 18.9 psi. To cool everything down, five nose-mounted heat exchangers comprised of two engine-coolant radiators, two intercooler radiators and an engine cooler were grafted onto this compact SUV. So the big nose is totally justified. 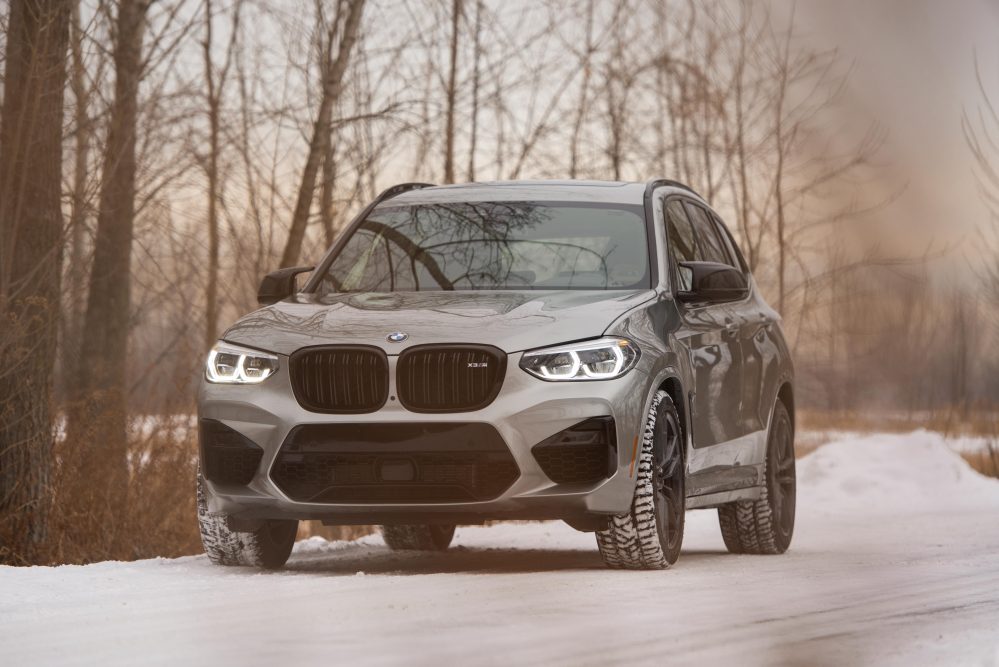 The result of all these mods is nothing short of impressive. Power for a standard X3 M is rated at 473 horsepower and 442 lb-ft of torque. The Competition model lifts things up to 503 horsepower, allowing it to sprint to 100 km/h from a stop in a supercar rivaling 3.5 seconds.  It costs $96,498 ($86,198 for a non-Competition model). 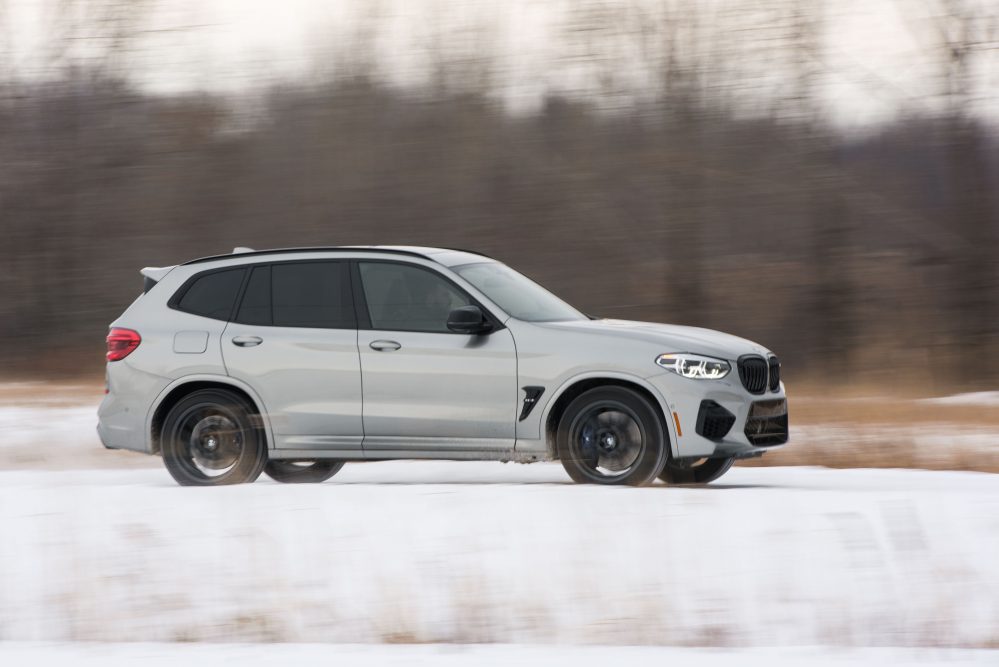 The 2020 BMW X3 Competition’s standout driving feature is definitely its rock-solid feel. This thing drives like its a brick on four-wheels, absorbing road imperfections as if it were feeding on them. Weight balance is also exquisite, which allows it to feel surefooted at all times. 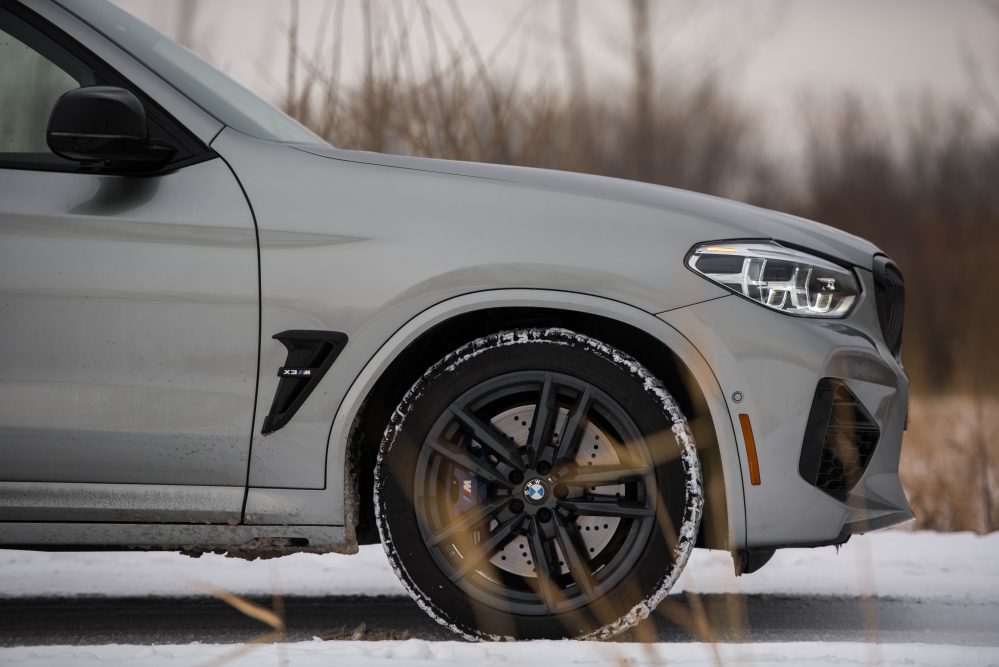 I had the opportunity to drive the X3 M during two mild snow storms, which allowed me to really test out its multi-facet all-wheel-drive system. Everything in this vehicle can be adjusted to your liking, overwhelming to a certain extent,  but nonetheless handy. 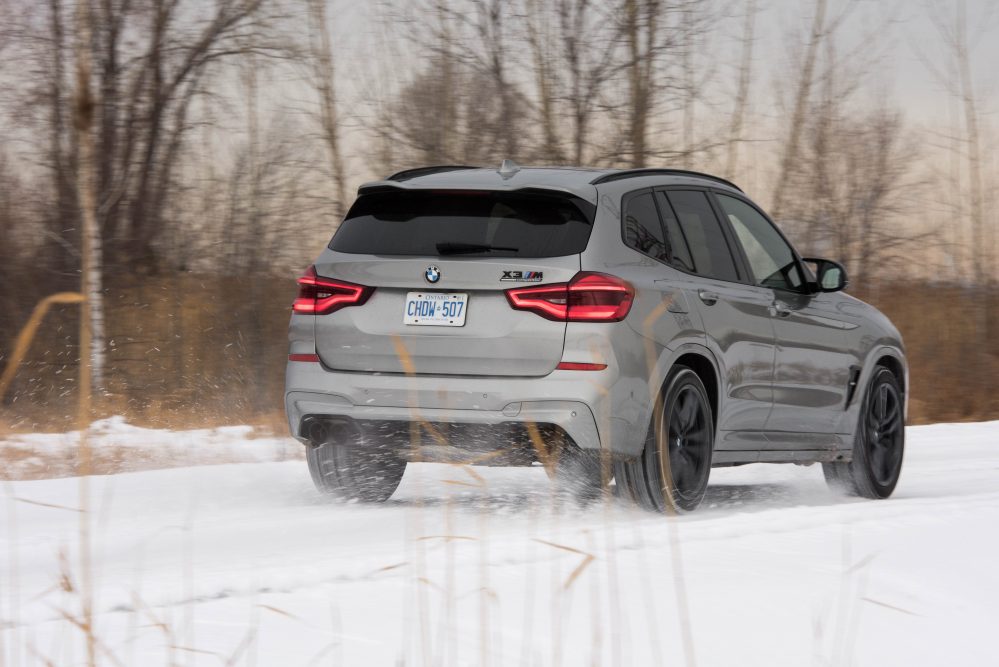 Suspension, all-wheel-drive characteristics, steering, engine response and cabin lighting can be all customized to your liking. This means it also transforms into a tremendous daily driver, although the suspension always remains relatively stiff and the engine’s fuel consumption is never really “efficient”. 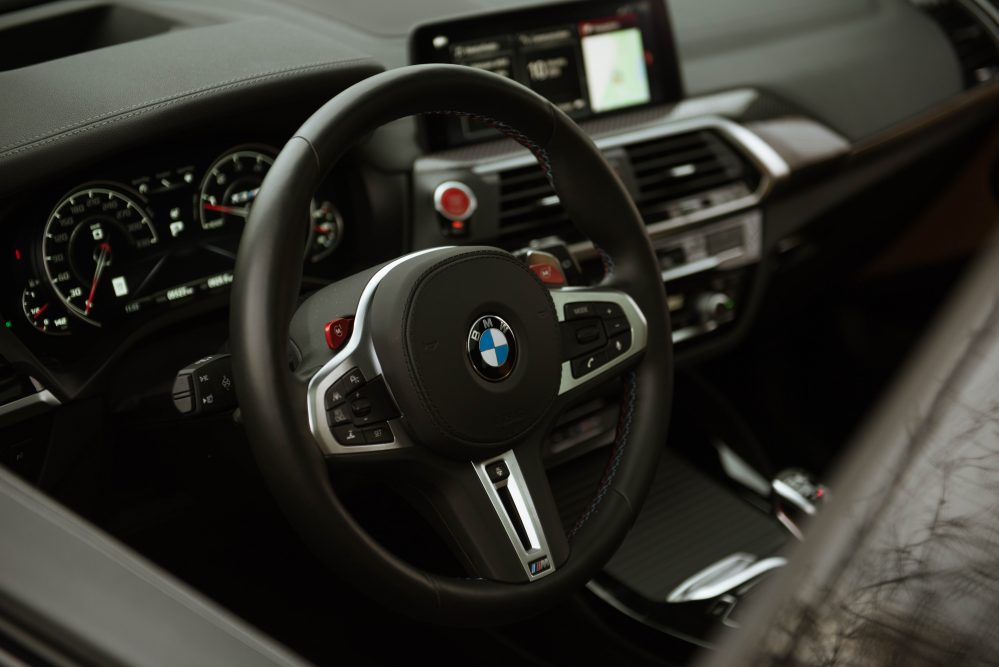 The X3 is nevertheless a practical vehicle, large trunk, plenty of cargo and just the right size for a couple with one, or even two young children. It also looks very inoffensive, which should help keep the cops away when you’ll be nailing it on the interstate. 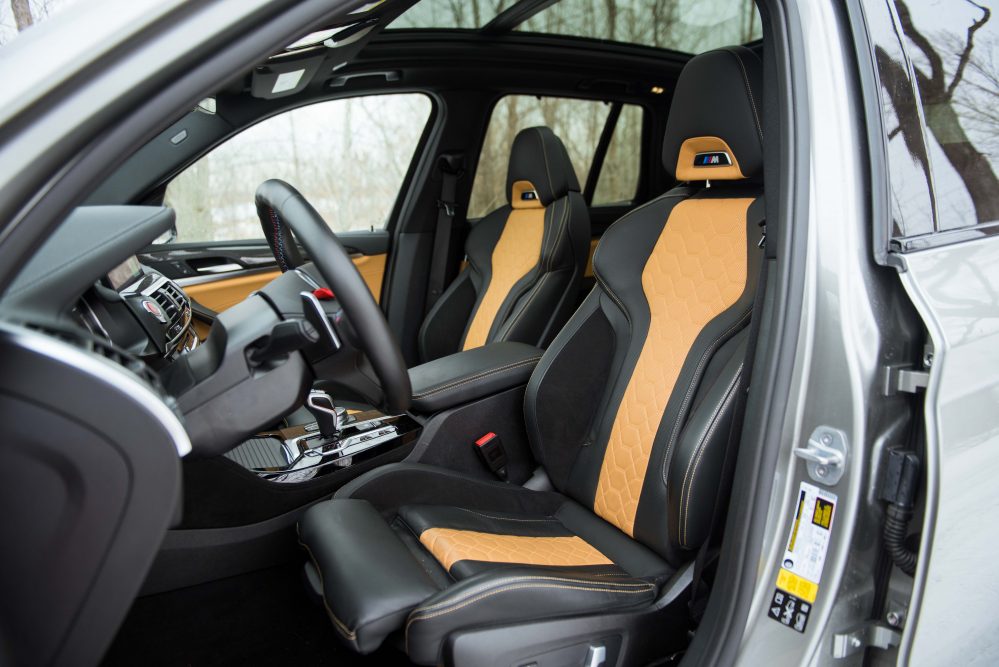 I also totally dig the racing M seats and the two-tone beige on black color package. It makes the X3 look purposeful and actually sporty. Carbon fiber trim also accentuates the normally spartan cabin. BMW iDrive remains a peach to use, although I can’t wait for Android Auto to finally be available. The X3 M’s seats hold you firmly in place, making you want to sit in them for very, very long rides. 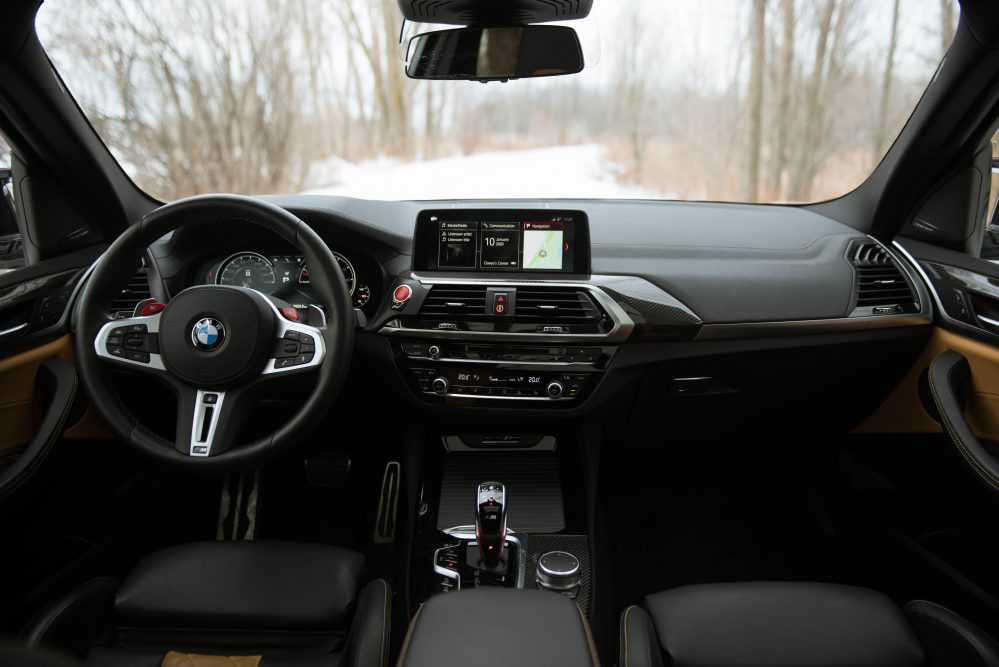 Like in an M5, two “M” buttons are located on the steering wheel for your favorite presets. I used a full-on M mode, no traction control, extreme everything on for my M1, and a more laid-back, but still athletic configuration for my M2. This proved handy over icy roads. 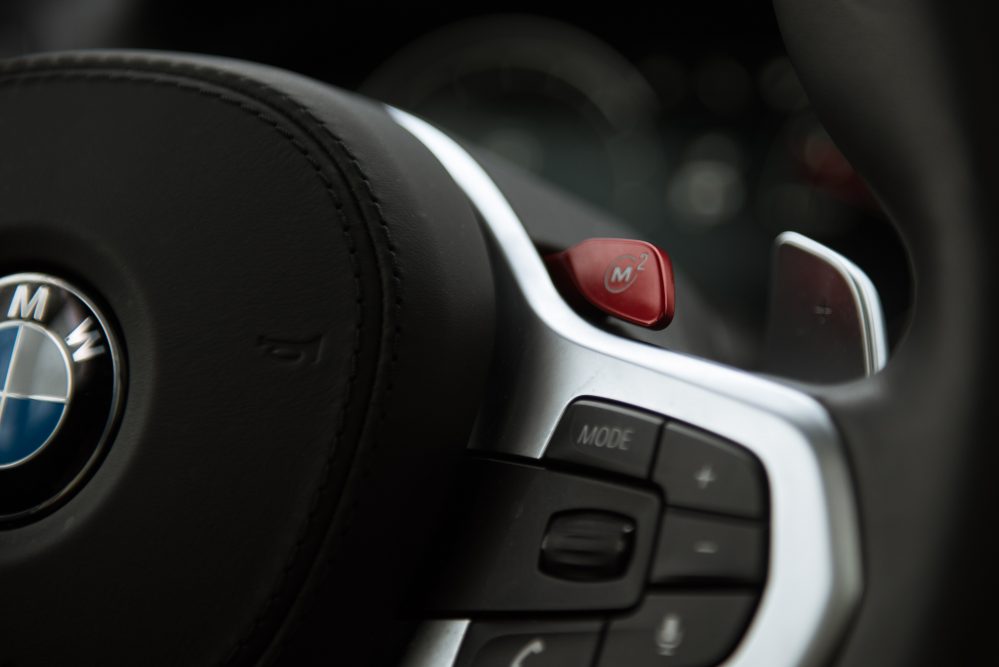 The X3 M enters a corner with the same level of finesse as an M car. It prepares itself and anticipates where you want to bring it. When its differential is set to its sportiest setting, exiting a high speed corner full throttle will kick out the rear. Bringing things straight again simply requires slight steering input and you’re all set. The engine sounds the business, the transmission shifts with authority and the entire experience is very fun.

This is a vehicle that’ll make even the most lukewarm of drivers perform heroic feats. 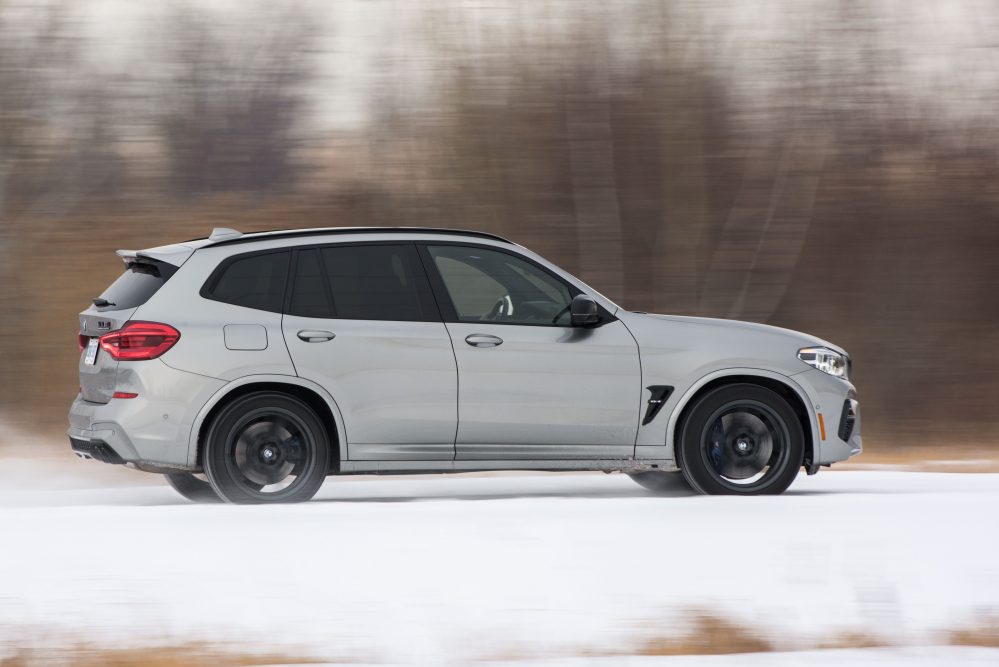 The 2020 BMW X3 M Competition is a fast vehicle. And I mean ridiculously fast, capable of instantly grabbing triple-digit speeds and effortlessly cover ground at triple the speed limit. The X3 M simply never stops providing forward thrust. Even in its most frugal mode, there’s an overabundance of power and torque, making it feel light and agile, proving once more that anything with too much power is instantly more fun. 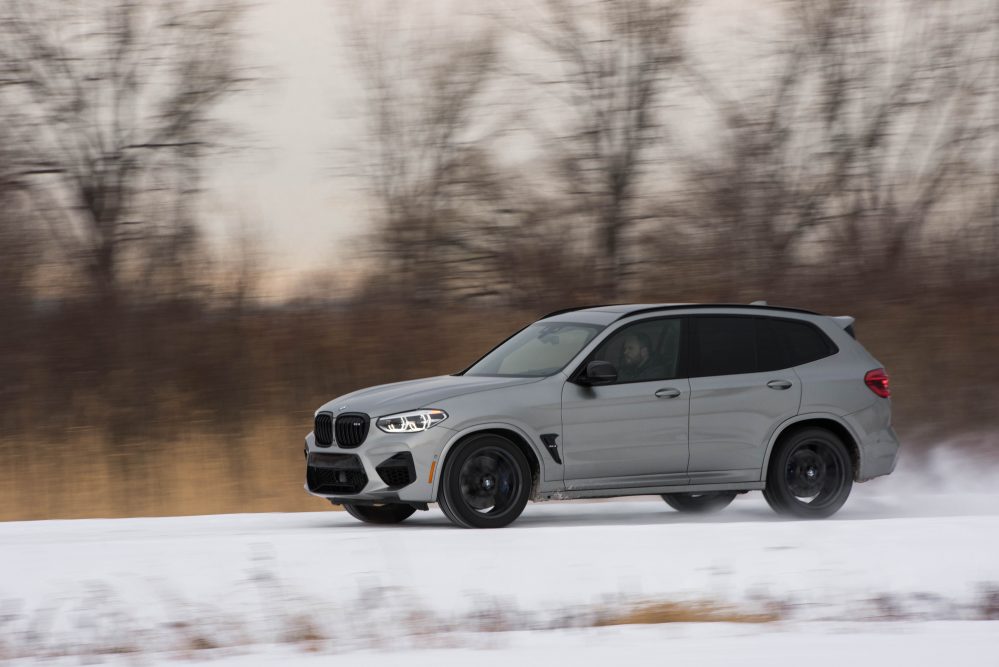 Perhaps, the more important question when carefully analyzing the 2020 BMW X3 M Competition is: why? Why build a compact luxury SUV that can blow the doors off a Ford Mustang GT all while carrying the kids, their gear and the dog? 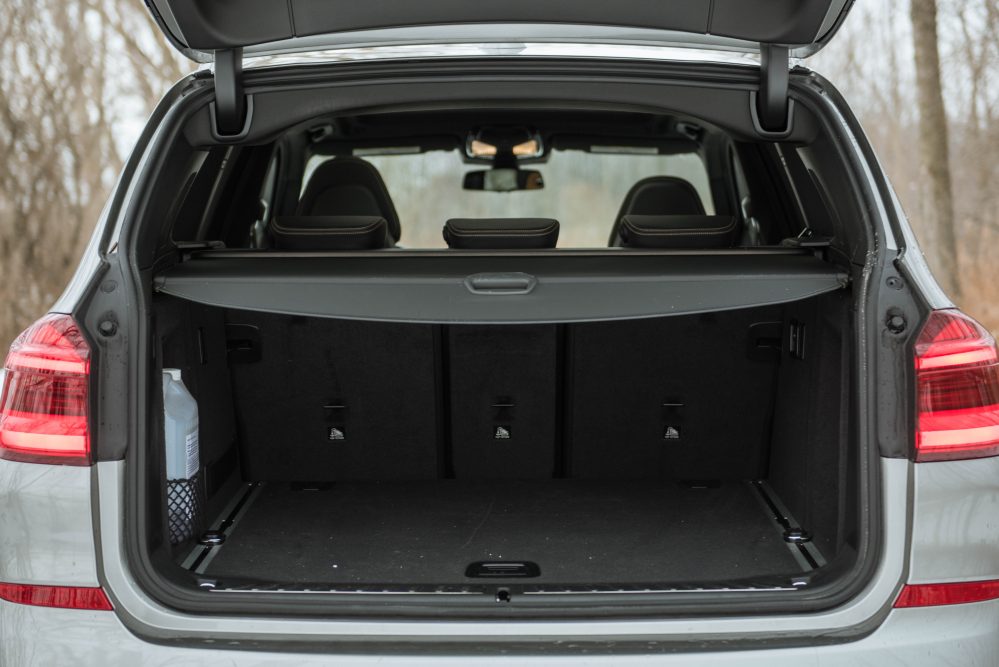 Some questions are sometimes better left unanswered. One thing’s for certain, this is a clear demonstration that engineers are our modern gods, capable of defying the laws of physics through progress and forward thinking. The 2020 BMW X3 M is just an inevitable reaction to the market’s current trends. 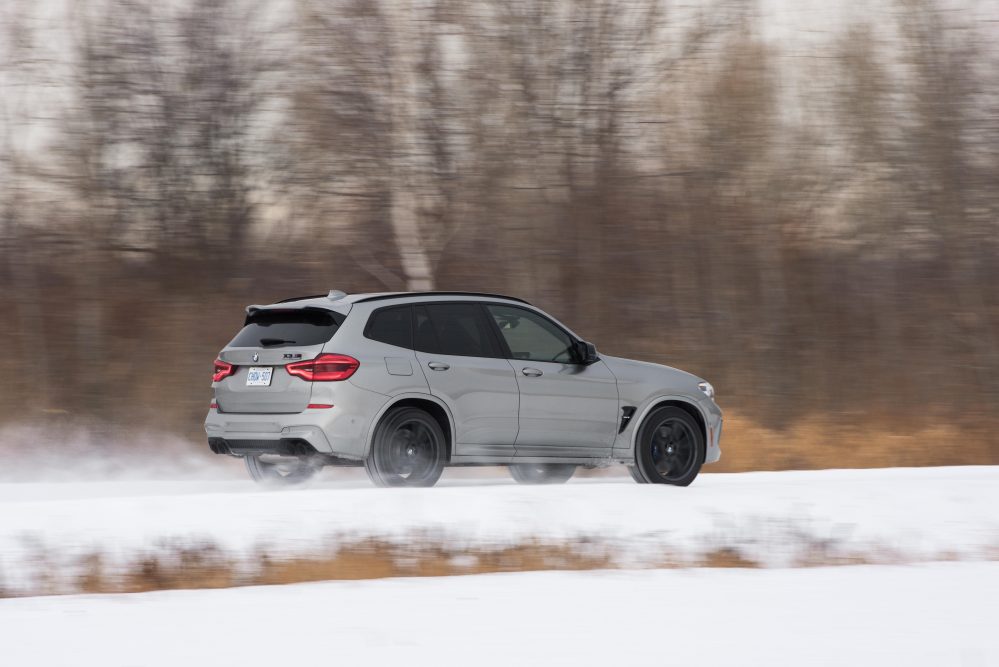 Hey, if it can allow the development of more immensely pleasurable vehicles like this one, than I’m all-in. As perplexing as this SUV may seem, it’s an absolute marvel of engineering.