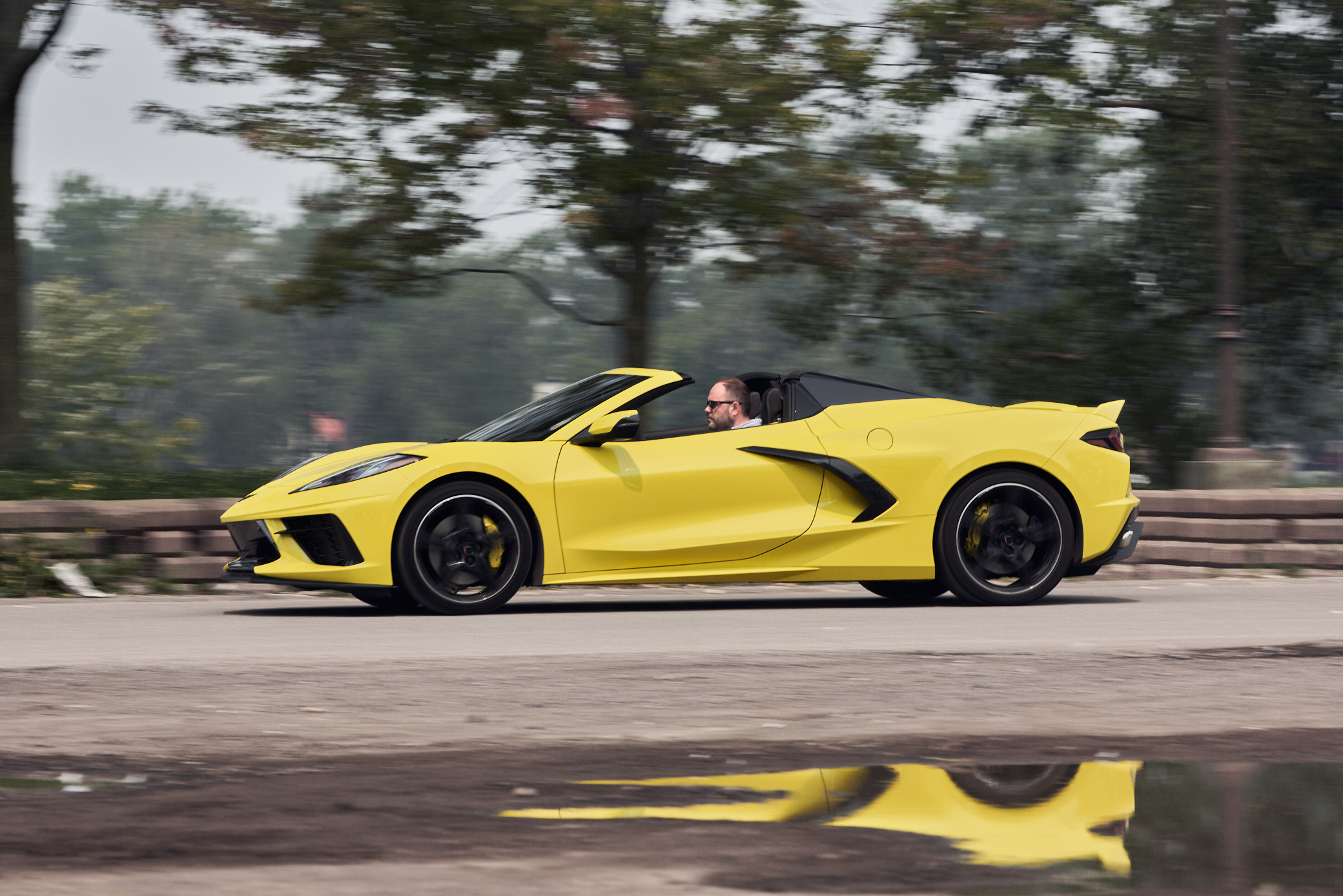 The 2021 Chevrolet Corvette is arguably one of the most important cars to have come out of General Motors in recent years. It could also go down in history as the most important Corvette ever produced considering it has its engine located behind the cockpit for the first time. How does it stack up? Well, I can’t compare with old Vettes since I have never driven one, believe it or not, but I can tell you with confidence that it puts much more expensive supercars to shame. 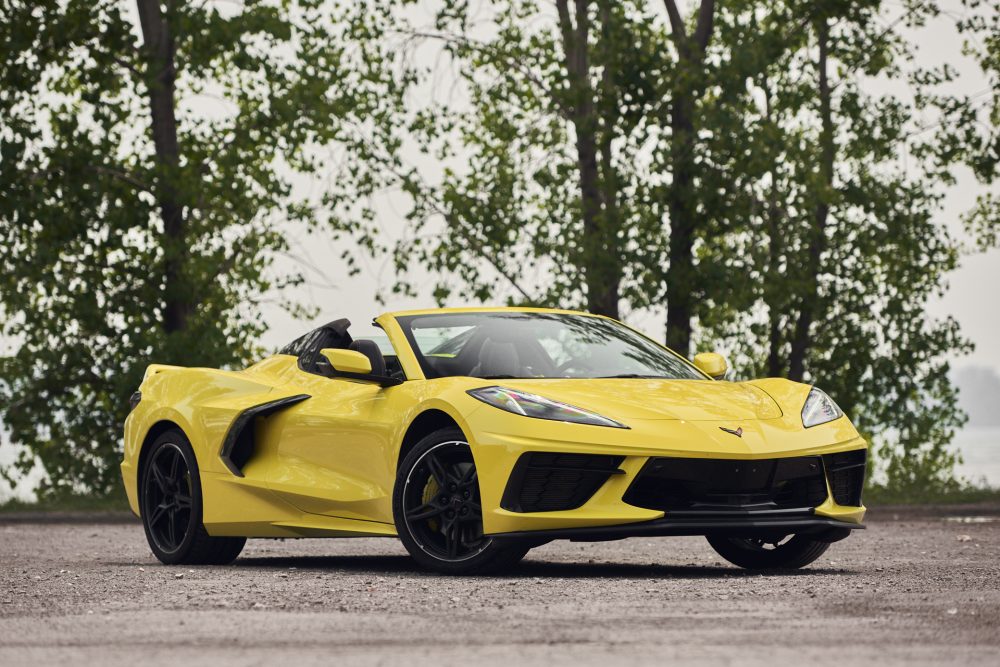 It took me a while to get my hands on the C8 Corvette due to the COVID-19 pandemic. Poor Chevrolet: the pandemic hit around the same time the first-ever mid-engine Corvette was coming to market, which forced GM to halt production. Many people who had ordered a 2020 model had to wait for a 2021, which means we journalists were left on the back burner for a while. A year and half later, we can finally get our hands on one as weekly testers. And boy was it worth the wait. 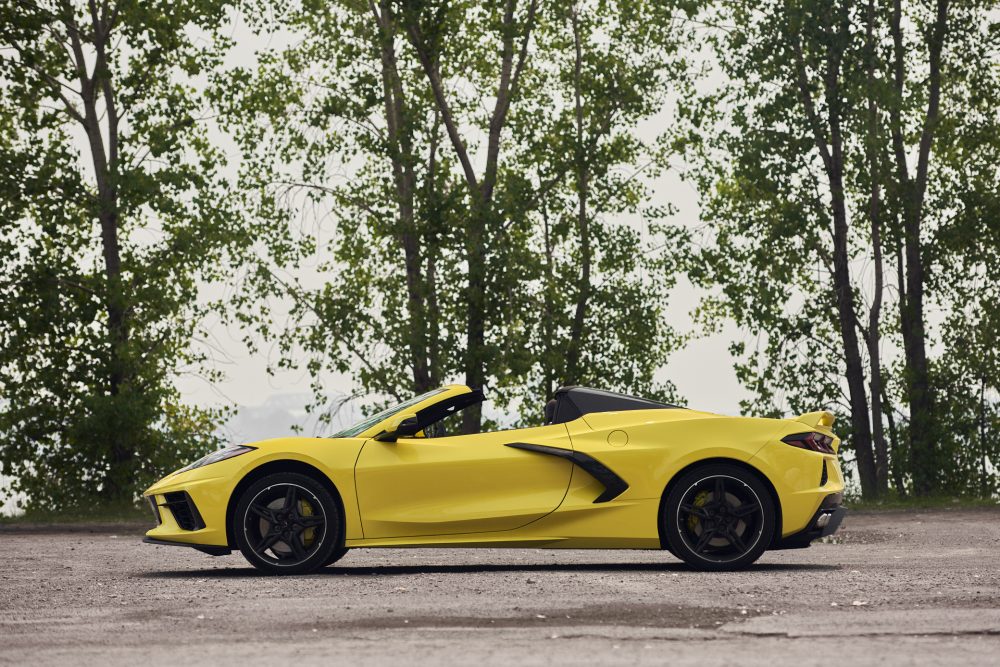 Obviously, the 2021 Chevrolet Corvette’s main attraction is its rear midship layout, but it’s also an entirely new machine now, one that promises to push the performance per dollar ratio even further than ever before. Remember, this has always been a Corvette promise: to offer European-levels of performance and sophistication at a fraction of the price. Now you’re basically getting a supercar that’s as potent as an Acura NSX, but for half the money. And this is just the base Corvette by the way. There’s a Z06, and a ZR1 coming soon. 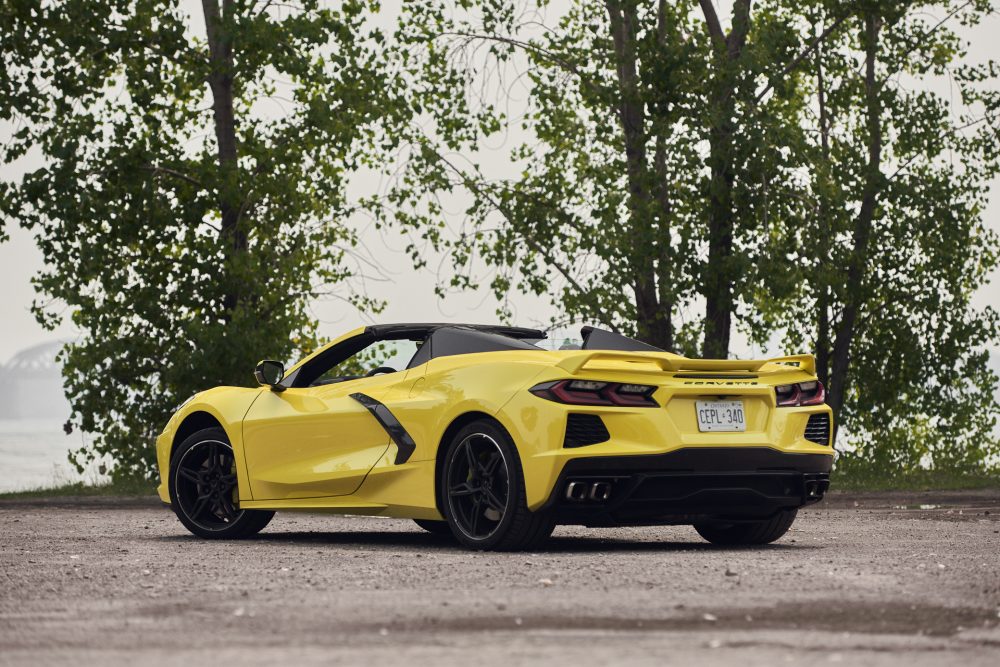 Powering all Corvettes is GM’s tried and proven 6.2-liter V8, also known as the LT2. It’s good here for a healthy 490 horsepower and 465 lb-ft of torque. Sitting between the seats and the car’s trunk, this brute of an American V8 hooks up to the rear wheels via an all-new eight-speed dual clutch automatic transmission built in partnership with Tremec. If you find the right piece of tarmac and activate launch control, this Corvette will launch out of the hole to 100 km/h in 2.8 seconds. I repeat: 2.8 seconds! 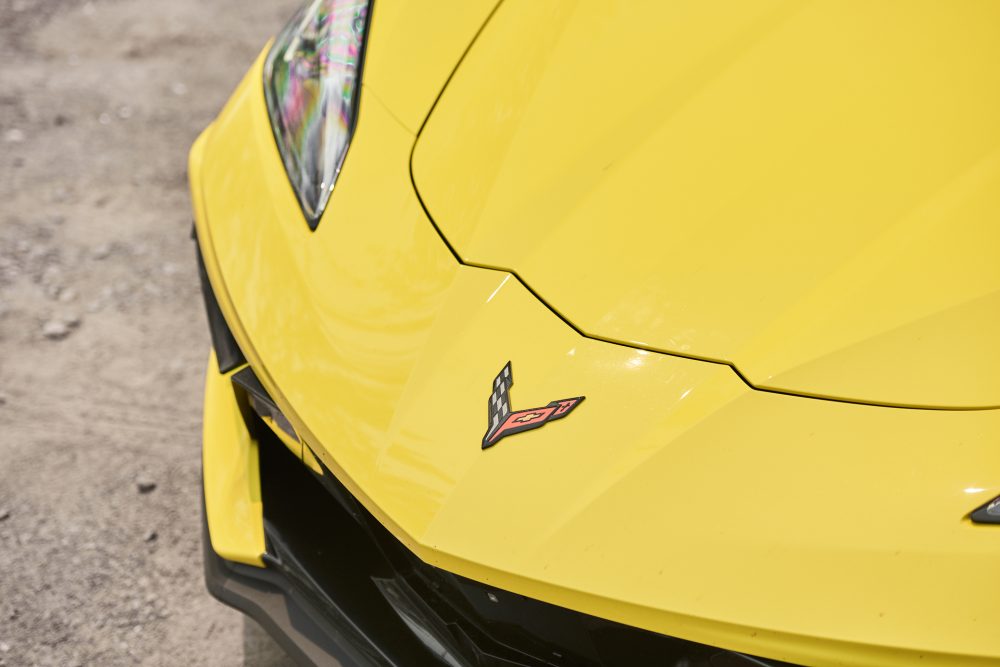 Pricing is where things remain rather affordable. The car comes either as a coupe or a full convertible like the one you see here. This one kicks off at an MSRP of $80,748, while the coupe sells for $71, 748. My car was the 3LT trim level with a few options grafted on like the must-have Z51 package, a $6,995 bundle of amazing bits including Brembo brakes, the Z51 performance suspension, a performance exhaust, a performance rear axle ratio, an electronic limited slip differential, Z51-specific front splitter and rear spoiler, Michelin Pilot Sport 4S 245/35ZR19 front and 305/30ZR20 rear tires, as well as a heavy-duty cooling system. Final price for the Accelerate Yellow (a $995 option) C8 you see here: $113,463.

Wind In Your Hair V8 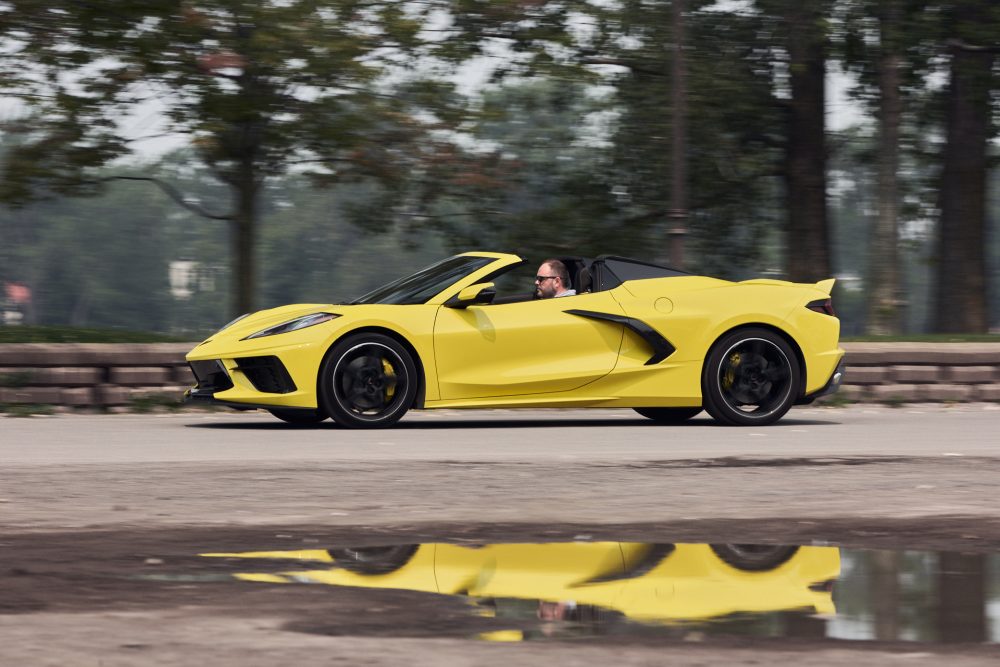 I’ve said this about other supercars like the Lamborghini Huracan Evo and the McLaren 600LT: if you’re going to commit to a supercar, get the convertible one. You’ll not only have way more fun bathing in sun and wind, you’ll fully appreciate the sounds that come out of the engine compartment. In the 2021 Chevrolet Corvette, those sounds are absolutely epic. 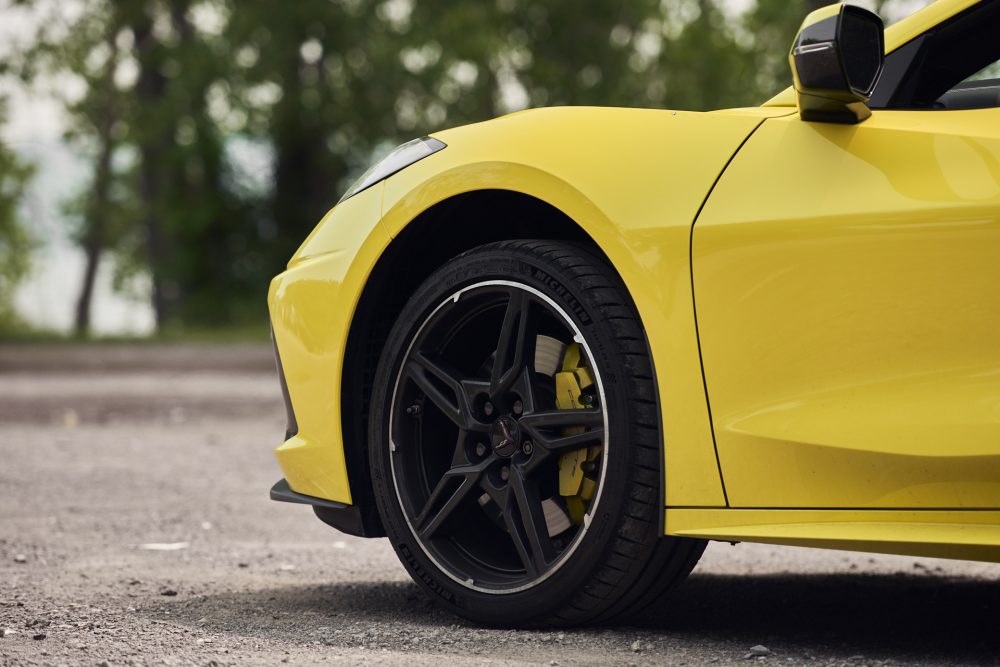 There’s something magical about hearing an American V8 burble, pop and rev right there behind your head. And rev is really something this engine likes to do as it’ll be much happier kissing the redline, even letting you bounce off the limiter at times.

This is a buttersmooth engine, one that not only picks up low in the powerband, but also pulls clean while remaining linear the entire way. Set the car to its most aggressive Race setting, and those exhausts scream their loudest decibels. Pull both paddle shifters at once, and the Corvette allows you to rev its engine while moving. It’s a nice party trick when you’re looking for attention. 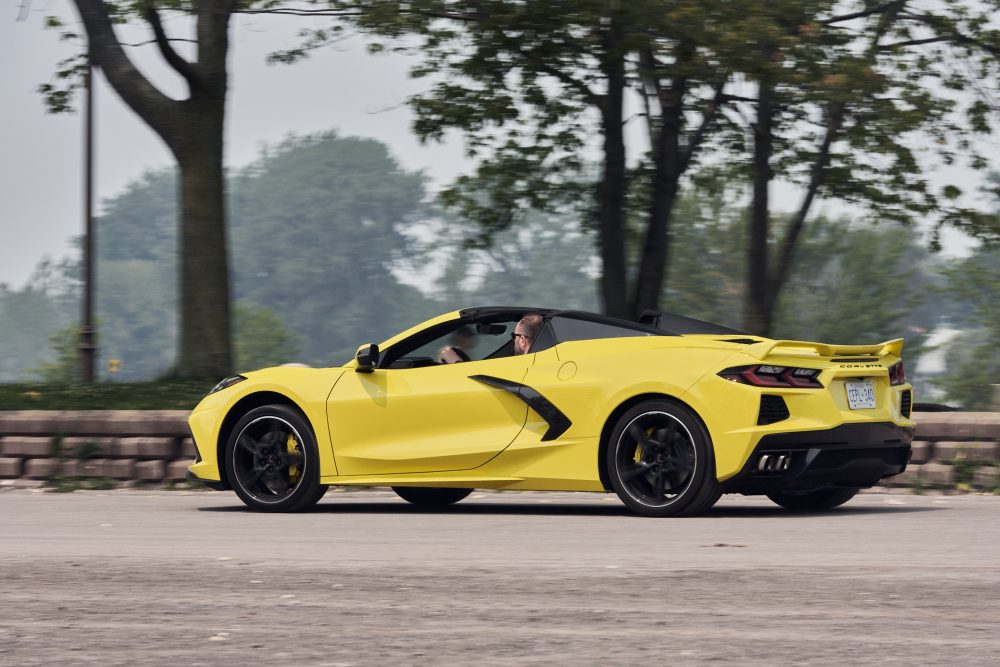 Speaking of grabbing people’s attention: my bright yellow example got many heads turning, with several smiles and positive thumbs heading my way. People respond well to the C8 Corvette, almost as though it’s a mythical animal, a rare sight, something special. Add to that the fact that it’s actually attainable and people get considerably more excited when spotting one. There’s even a handy nose lift feature to prevent you from destroying the front bumper. And as you can see, I forgot to turn it off for the photoshoot, which explains why there’s so much front wheel gap in these photos. Dope! 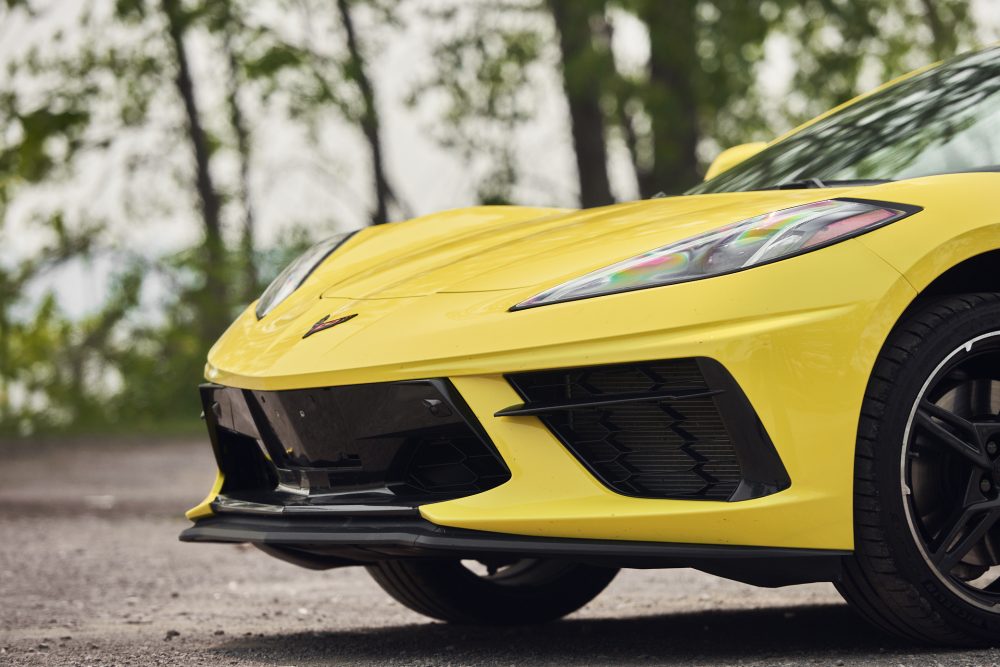 Pull the left trigger to grab a lower gear, and that Tremec transmission instantly hands it over. There are no delays, no lag, no complications. It just works. But while I appreciate the system, I feel the C8 deserves a manual transmission. Slam the accelerator pedal, and the G forces are strong, the shove on your chest is ample and the entire experience is mind-blowing, while never being too harsh. I mean, GM made sure to leave some room for the more potent versions. 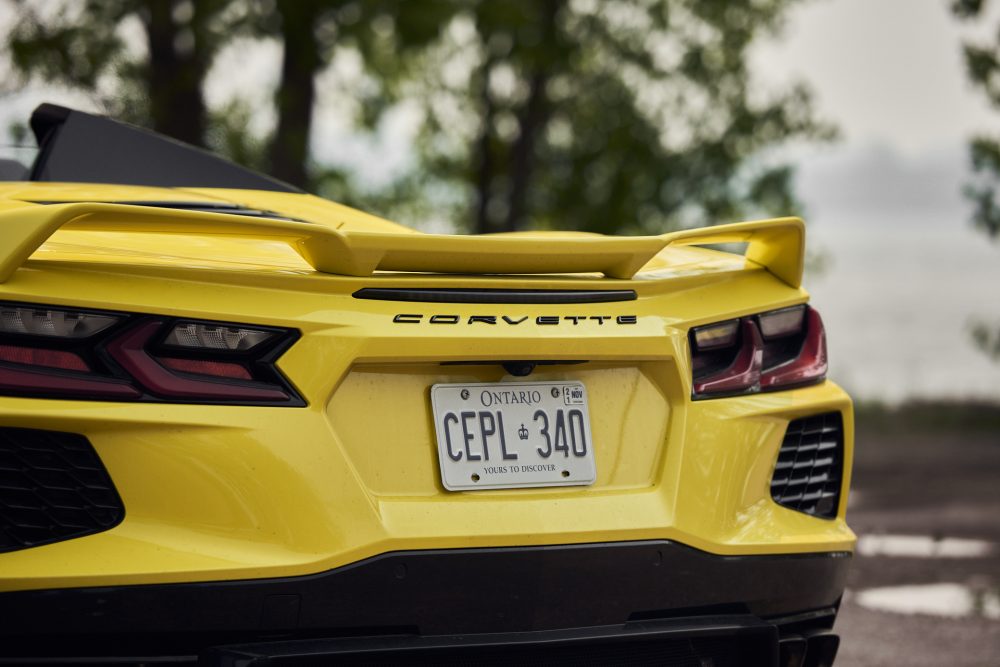 This is apparent when pushing the C8 hard on the track – something I had the chance to do at Sanair for an upcoming video -, the front feels light, yielding some understeer when reaching the limit. But it’s never something that’ll unsettle the car. Just give it some throttle, and the car quickly rotates back where you’re pointing it. It’s all massively controllable, easily accessible and absolutely well sorted out. 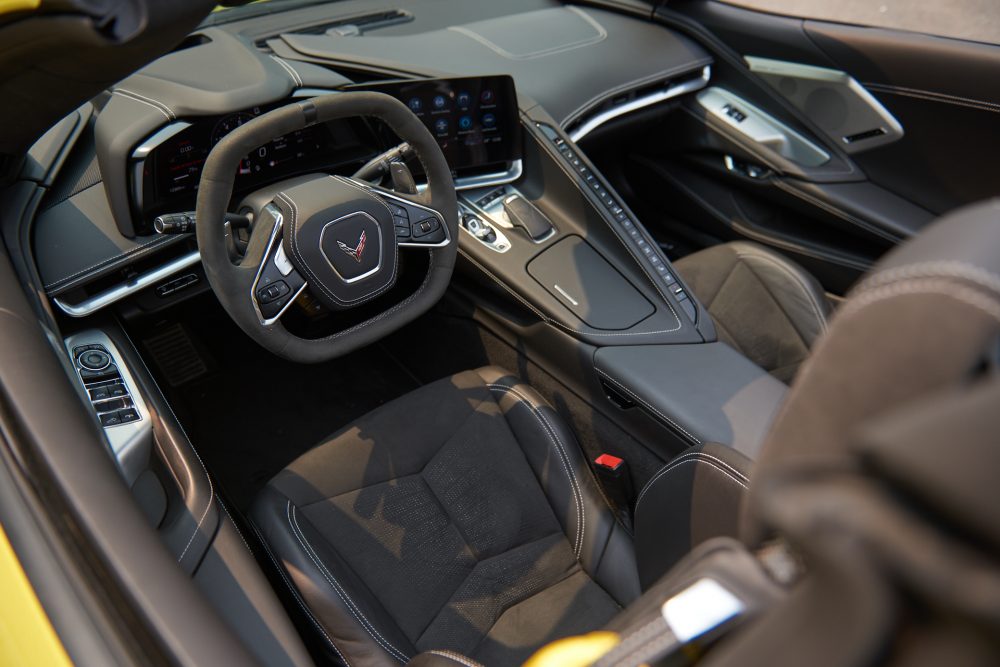 Inside, the 2021 Chevrolet Corvette greats you with a highly cocooned cockpit, something that resembles a fighter jet with its large spinal cord of buttons dominating the center console. It’s a bit much to take in at first, but once you realize it’s essentially the HVAC controls lined up instead of being clustered together on the center stack, it all makes sense. 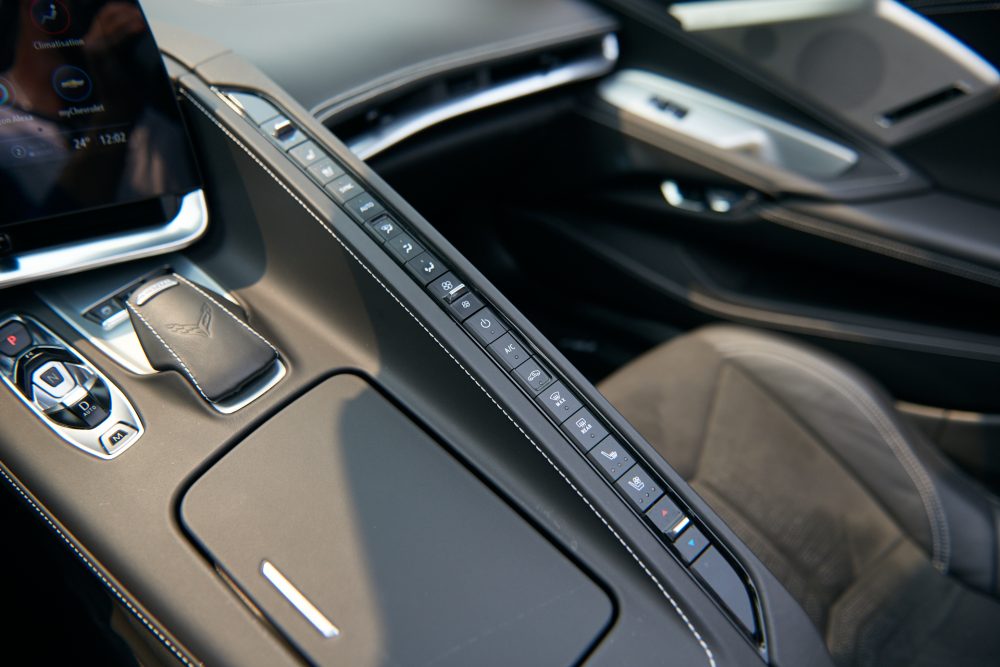 The C8 is filled with technology and features, which can make a first drive somewhat overwhelming. Chevrolet gives you different digital gauge pods to choose from, which can either be manually adjusted or linked to the drive mode you select. It’s also possible to select Z mode, which sets the car to a default, high-performance factory setting which also unlocks launch control. There’s a bit of confusion here as some modes overlap others, making you wonder what does what. It takes some times getting used to. 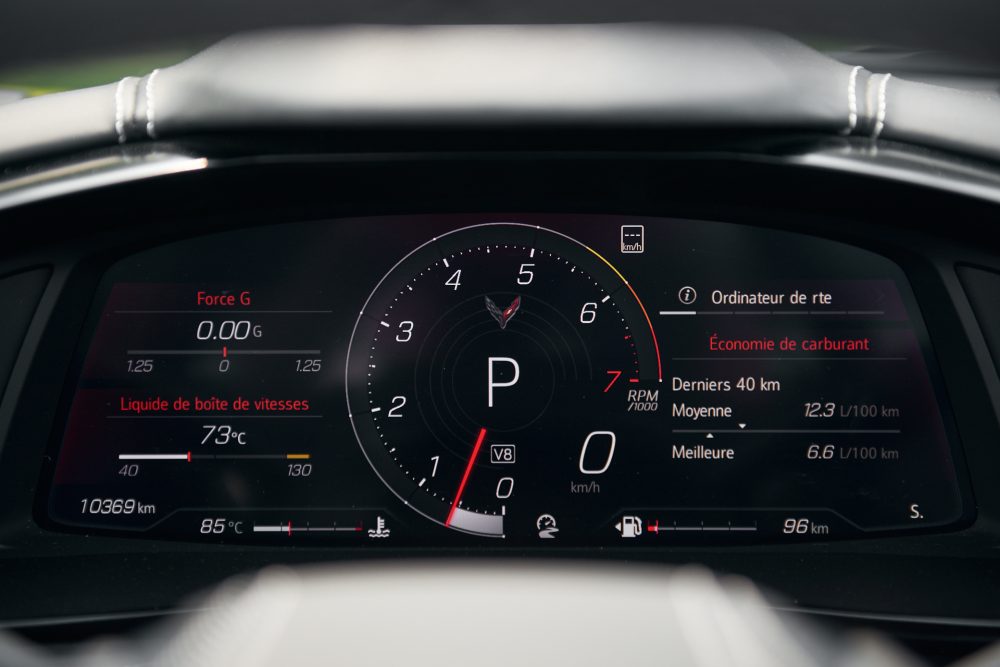 Then there’s the super cool track analyzer gizmo which allows you to record your lap times through the car’s infotainment system and transfer it onto a computer later on. The car even learns the track you’re driving on and records each lap time accordingly. You can even use it during valet mode to make sure that dipshit doesn’t start beating the crap out of your ride. How cool is that? 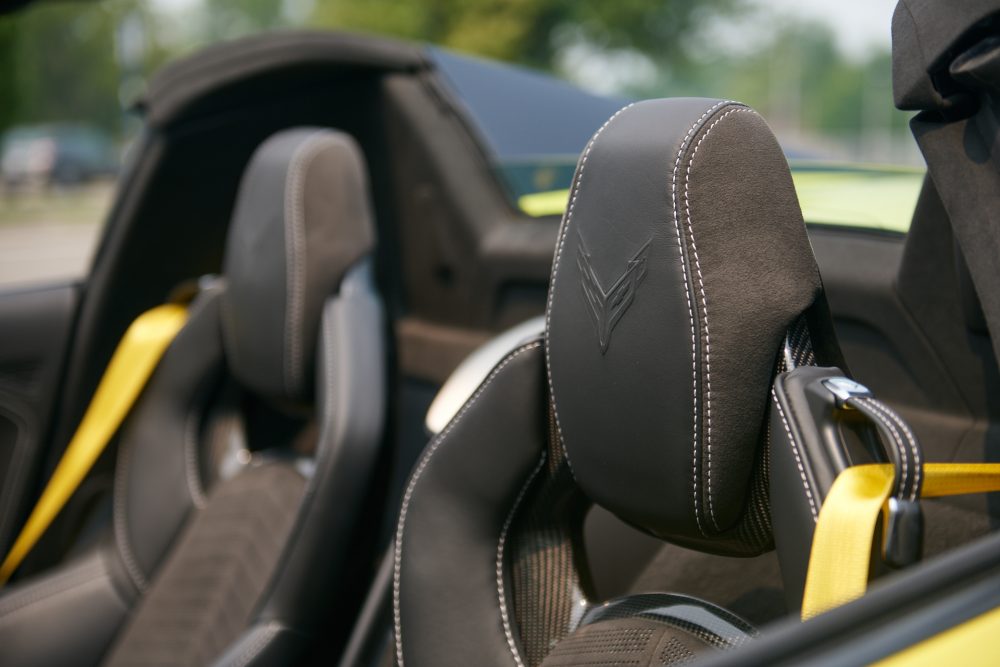 The Corvette has immensely comfortable seats, even if they’re mostly made for track use. I was also impressed by the amount of room this two-seat cockpit had to offer. Normally supercars aren’t made for big people such as myself, but in the Vette, I could properly recline my seat and give myself all the legroom I needed. Oh, and that squared-off steering wheel may look weird, but it feels downright perfect when pushing the car to its full potential on a closed circuit. 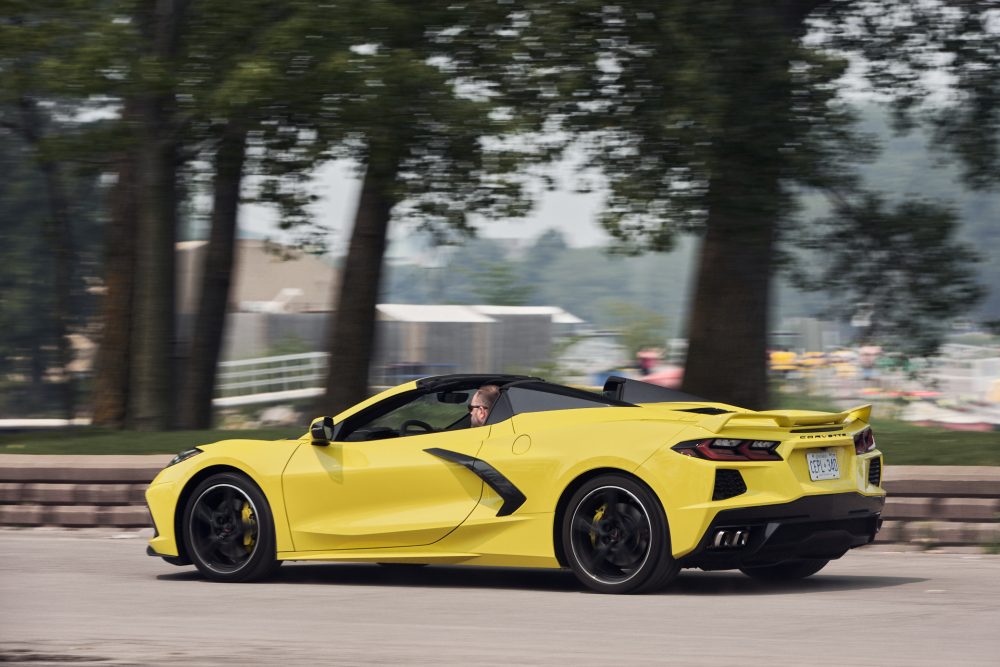 The 2021 Chevrolet Corvette is a highly emotional supercar that looks like something that should sell north of $200,000, but that’s actually sold at a decent price. It puts many high-caliber performance machines to shame while remaining humble, accessible and, more importantly, highly capable, fast and properly loud. There’s no sign of cost costing in here. On the contrary, it feels like a high quality item, something sophisticated, refined and well conceived. Yet, you can get one with decent equipment for less money than a BMW SUV. That’s an absolute homerun if you ask me.