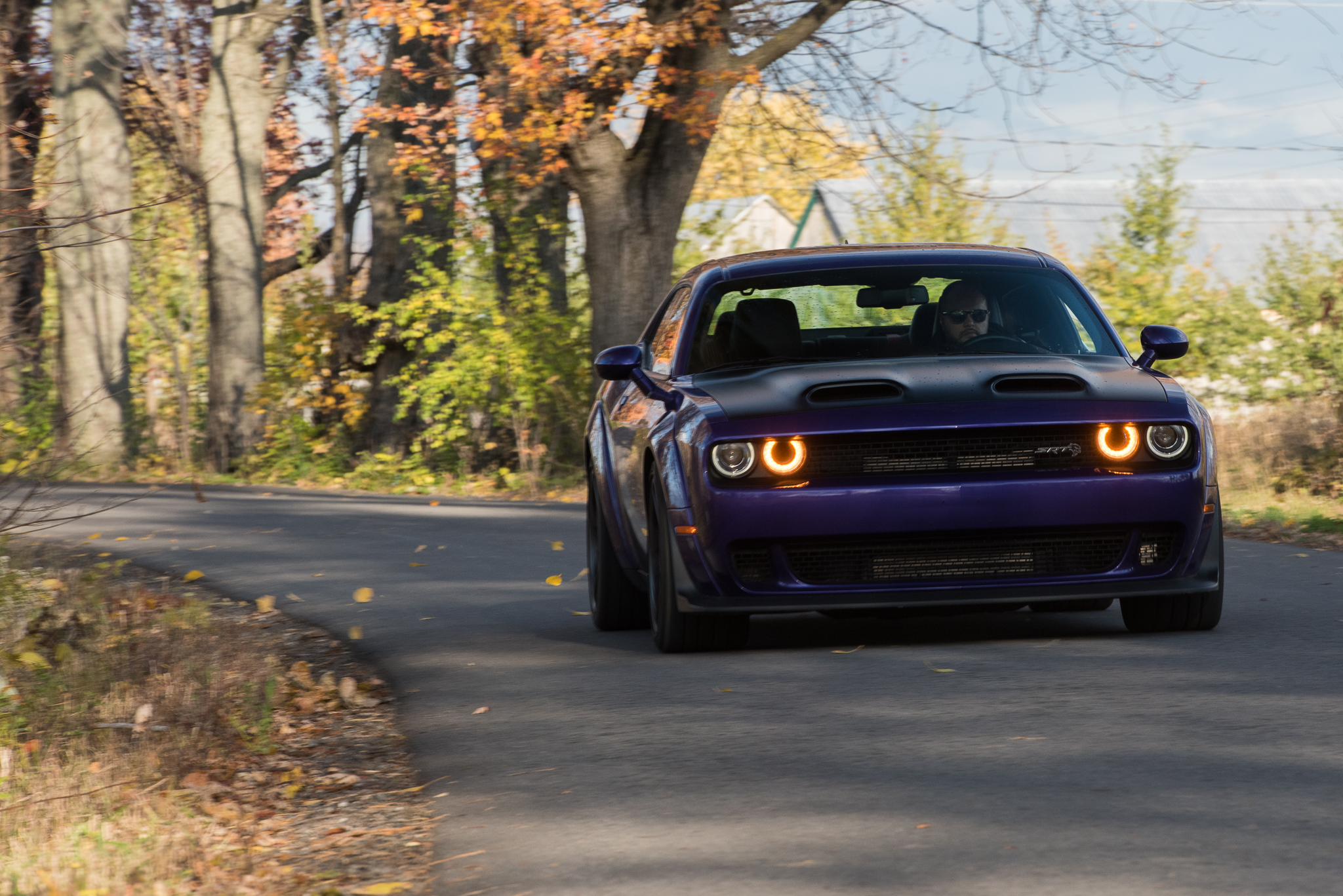 Driving the 2019 Dodge Challenger Hellcat Redeye Widebody felt amazing, especially in this day and age, where everything is censored and, well, weak.

As you know, the automotive industry is currently going through an important transition. Sooner than you think, gasoline-powered cars, especially ones with a V8, will be a thing of the past. Lately, I’ve driven a wide variety of electrified machines, some more enjoyable to drive than others. But once you taste a Redeye, you suddenly stop giving a shit about everything else out there. I don’t care what you think. This thing just kicks a hell of a lot of ass. 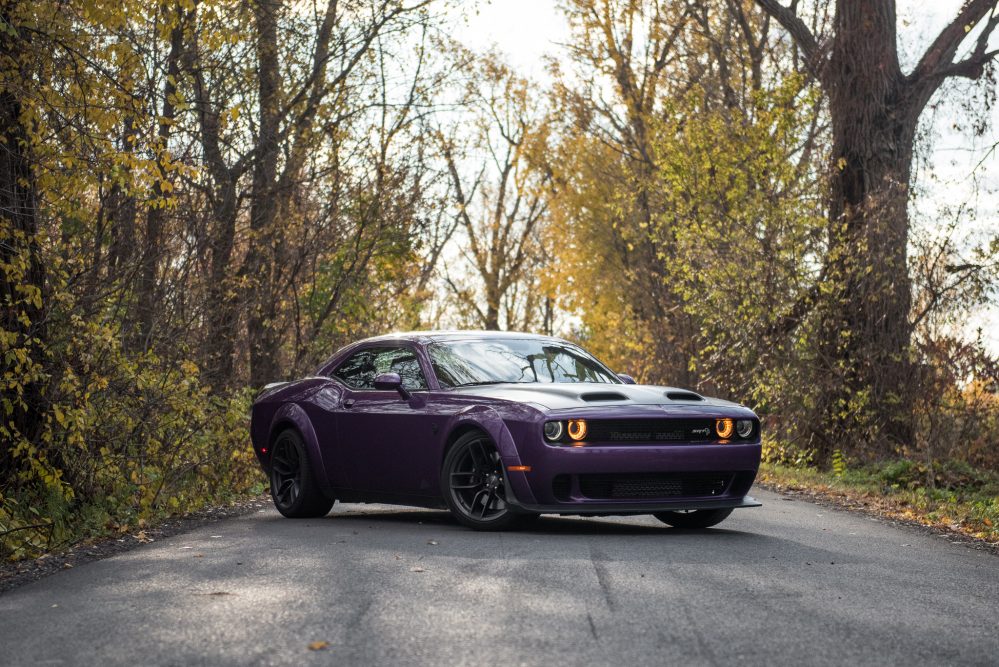 I like cars that don’t make apologies for what the are, and the Dodge Challenger is probably the best interpretation of that ethos. What you have here is a car that’s been riding on the same platform for over 15 years, but doesn’t really care what you have to say about it. Worse even is the fact that this architecture dates back to the mid-nineties when it was owned by Mercedes-Benz. The Challenger is basically a 30 year-old E-Class with a hell of a lot of horsepower. 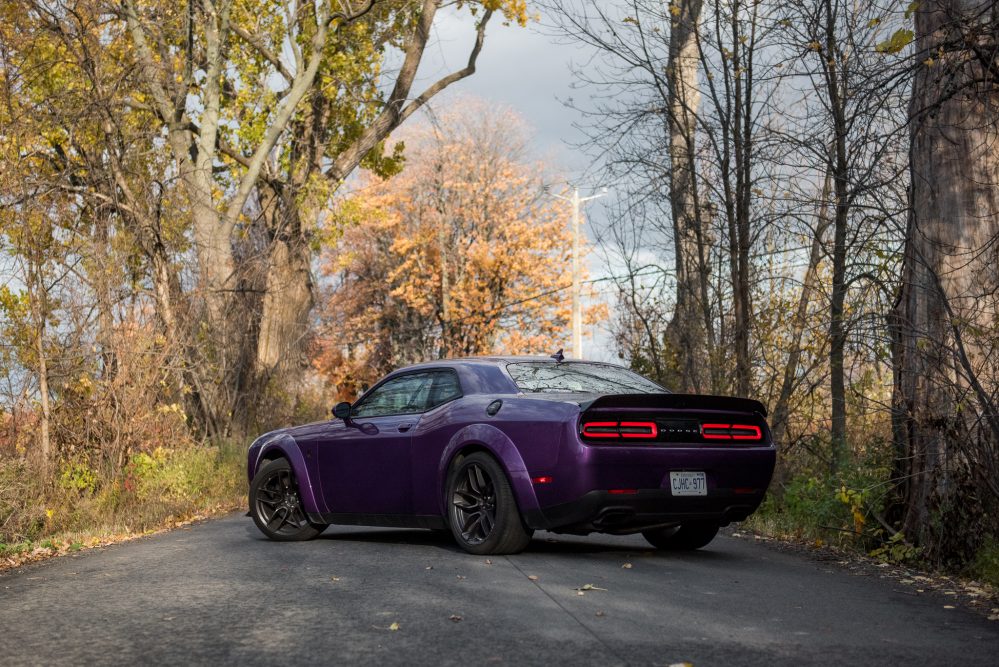 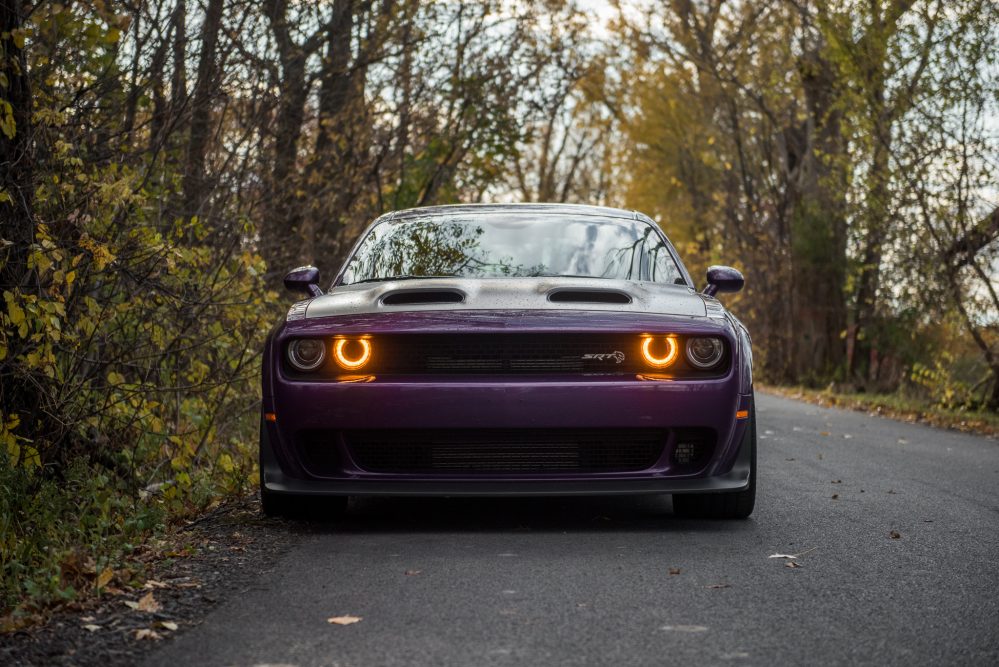 Now that the Dodge Demon is no longer with us, this means the Redeye is currently the most powerful and fastest Mopar you can buy from an FCA showroom, besting the Hellcat with its flimsy 717 horsepower. This kind of power is, at least for the moment, only available in the Challenger. If you’re into the four-door Charger and would like a bit of Redeye goodness, you’re  unfortunately  out  of  luck. 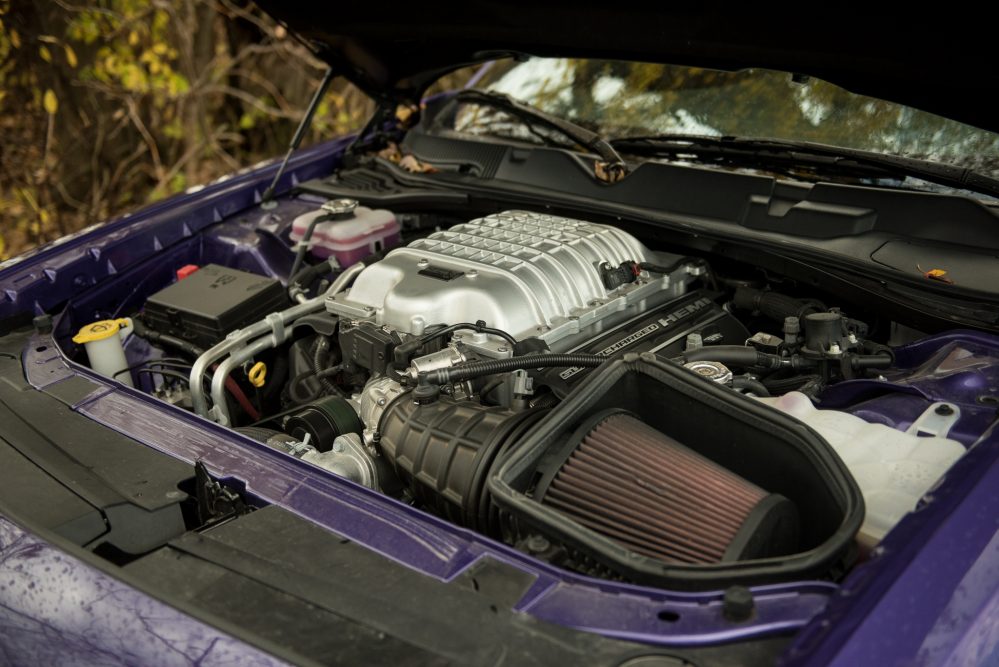 To achieve such insane numbers, the 2019 Dodge Challenger Redeye is powered by a heavily modified version of the Hellcat’s supercharged 6.2-liter HEMI V8. It’s basically a slightly detuned Demon engine, which gets a different blower, improved cooling, and a modified intake and exhaust system. 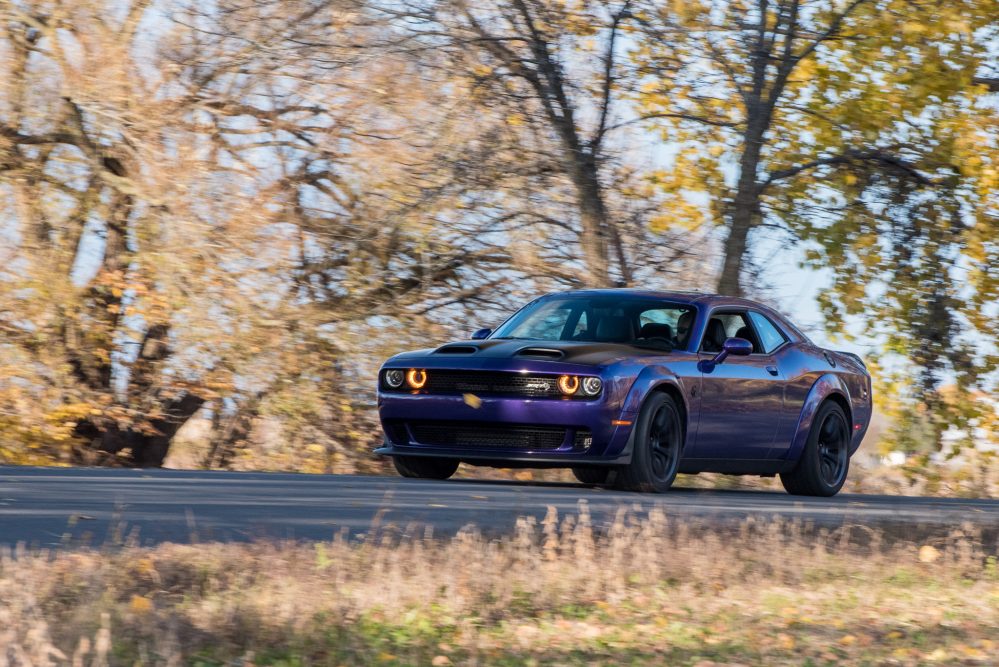 And unlike the Hellcat, which can be had with a six-speed manual gearbox, the Redeye only comes with a ZF-sourced eight-speed automatic unit. You know what? Considering how much power this thing sends to the rear wheels, I’m totally ok with that. 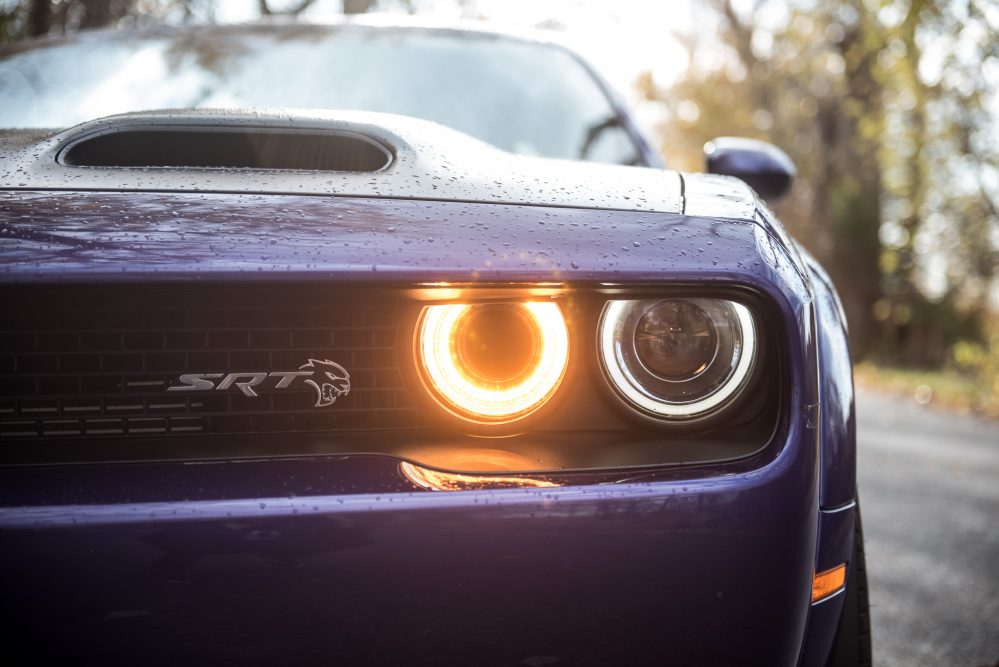 As for the Widebody appellation, it refers to the optional fender flares which not only make this muscle car look like a mid-70’s CanAm race car and totally badass, mind you; but also allows the car to be fitted with a larger set of rubber, both front and rear. Equipped this way, the Redeye gets 305 section-wide all-season (yes, all season) on all fours. That’s massive!

My tester, loaded to the gills, and painted in the oh-so pretty Plum-Crazy Pearl paint job, stickered for a whopping $110,000, or roughly the price of a base Porsche 911 Carrera. 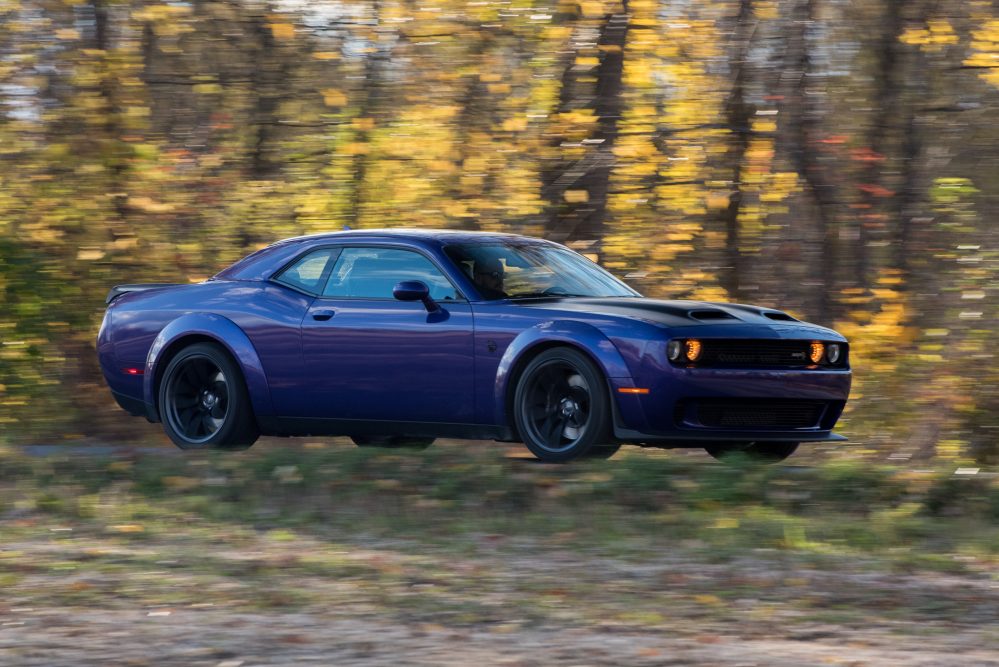 None of what you just read about the expensive price tag matters because this thing makes 800 horsepower. Anything which comes out of a dealership stock with this much power has the right to be whatever it fuckin’ wants to be. 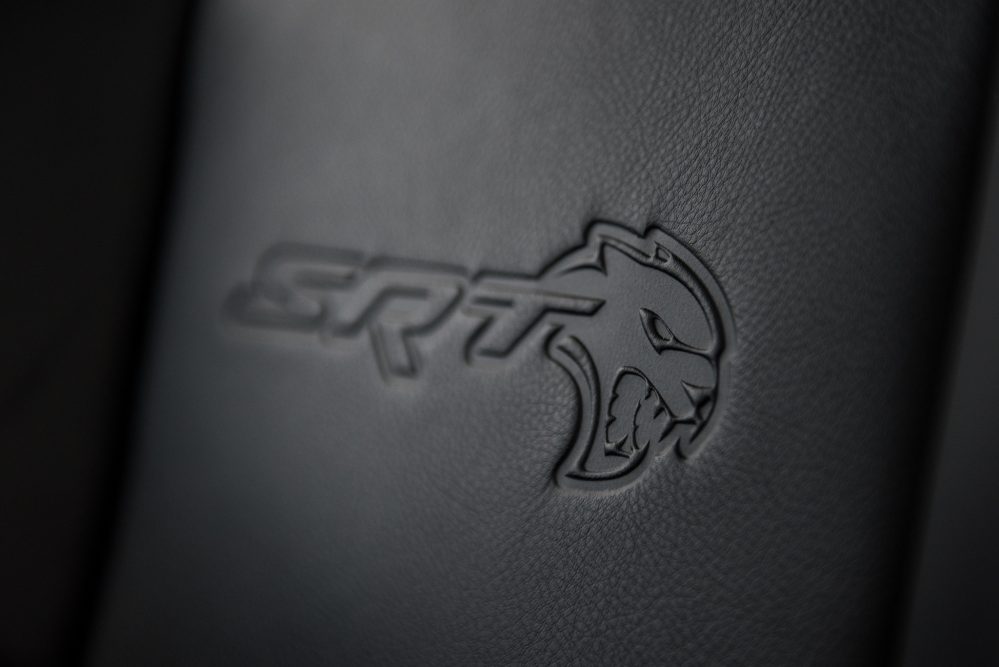 Now, since I do everything in writing, I’ll do my best to explain in words what such thunderous power feels like. It’s the kind of shove in the chest that will hit the quarter mile in under twelve seconds. The sort of brutal thrust that gives you tunnel vision as the front of the car lifts and the digital speedometer spins up super fast as if you were travelling through time in a DeLorean. 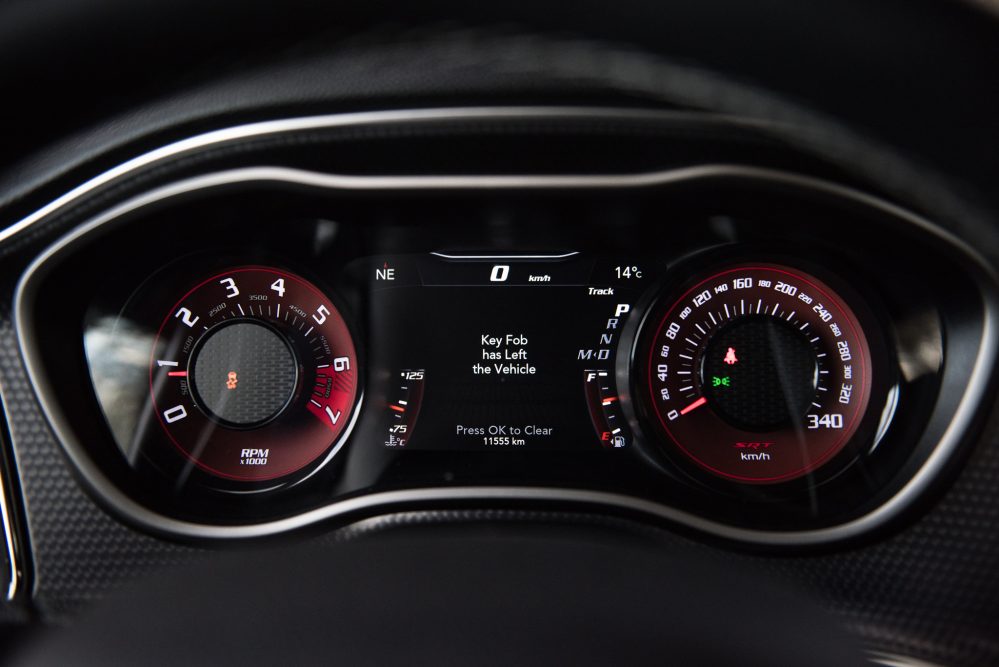 Accelerations are so brutal in a 2019 Dodge Challenger Hellcat Redeye, that the massive rear tires can barely transfer all that torque to the tarmac, no matter how fast you’re going. Even when the car’s traction control systems are turned on. While I had this thing, I made the mistake of gunning the throttle during a cool October morning on the highway.  It  scared  the  hell  out  of  me. 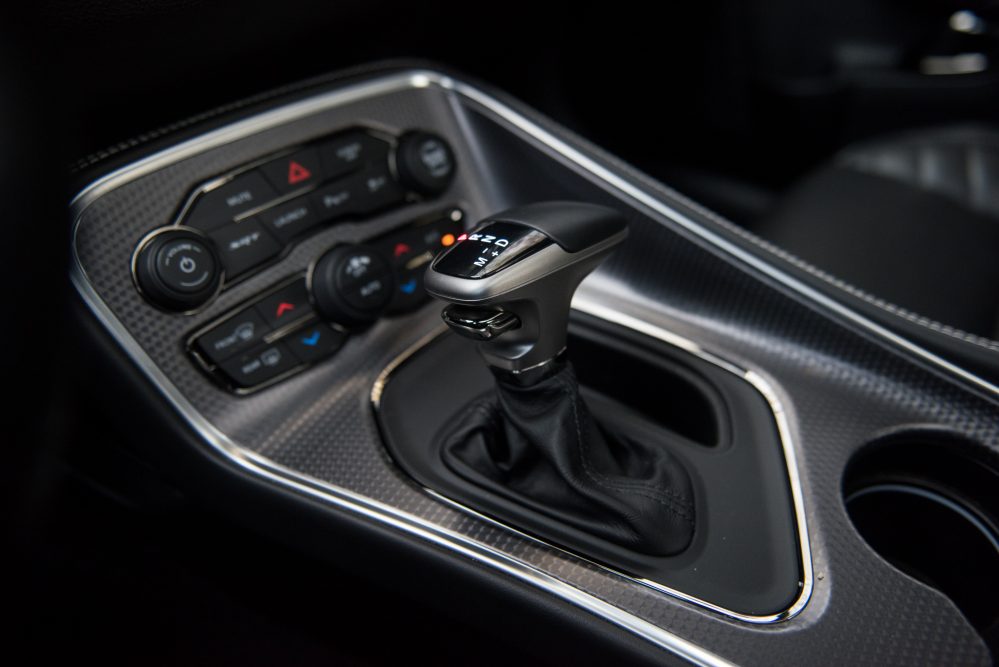 I was driving around 110 km/h, in its most aggressive Track mode. The moment that gearbox dropped a few gears, the rear of the car lit up, and the entire thing started drifting on the freeway, smoke filling up the rear fenders and all. That’s how much power this thing makes. 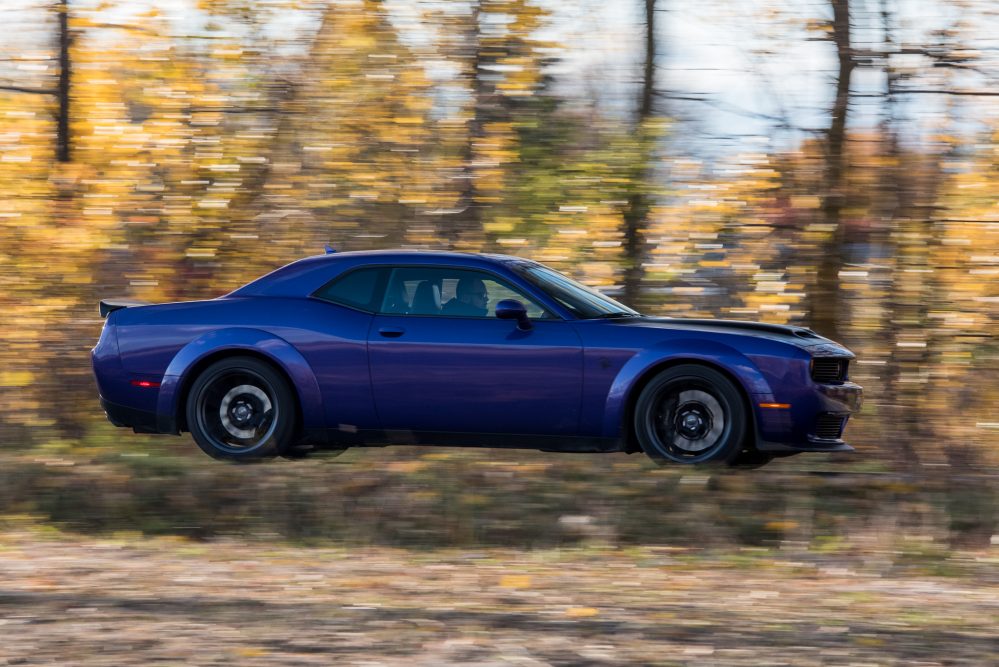 Yet, it’s all so easy to grasp and surprisingly non-scary once you’ve gotten used to it. While yes, the insane horsepower and torque figures will throw any amateur into the ditch the moment they’ll try to act cool, but the Redeye’s drive modes and electronic aids, which can all be controlled via the amazingly well-designed UConnect infotainment system, actually do a fantastic job at filtering out the danger. 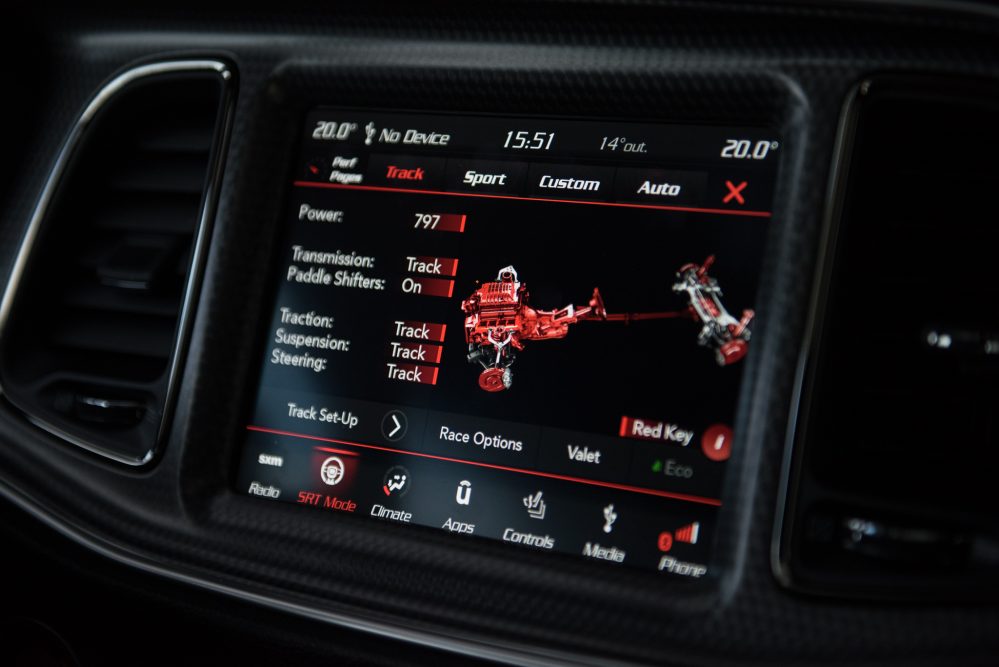 By default, the car is set to a “tame” 500 horsepower, where the adaptive Bilstein dampers soften up, the automatic gearbox sets itself to lazy grandpa mode and the steering wheel goes all soft and docile. In this mode, the Redeye is nothing more than a big softy, a surprisingly comfortable one at that. 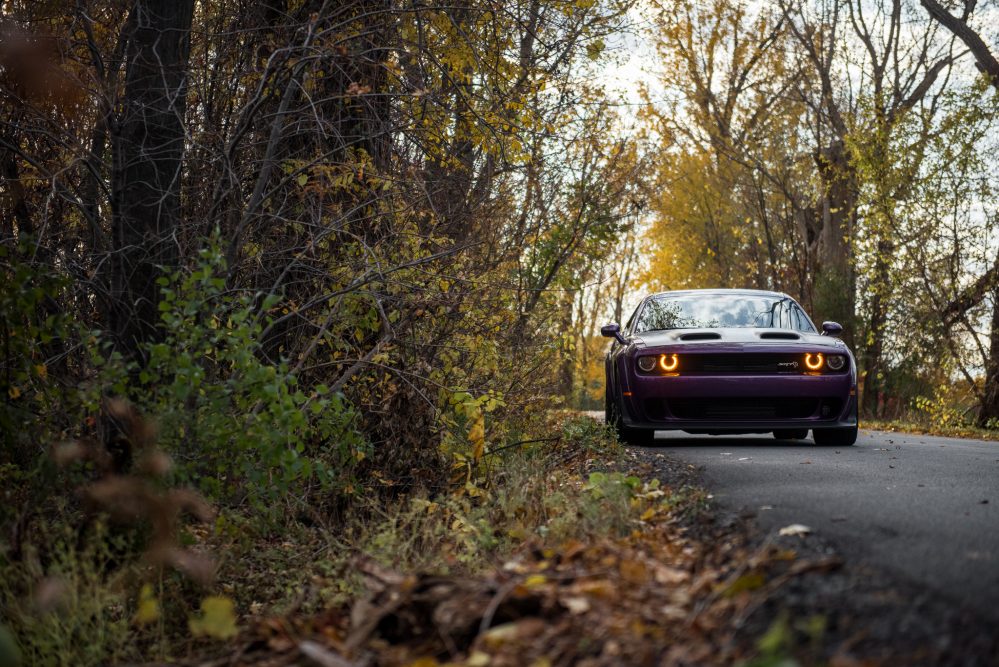 As a matter of fact, driving this thing in calm mode on our shitty roads revealed one of the best suspension setups I’ve driven in years, and I drive a lot of stuff. What the Challenger loses in refinement and build quality, not to mention an interior design that looks plain awful, it makes up for with a compliant ride and damn comfortable seats. This is a fantastic grand tourer, actually. 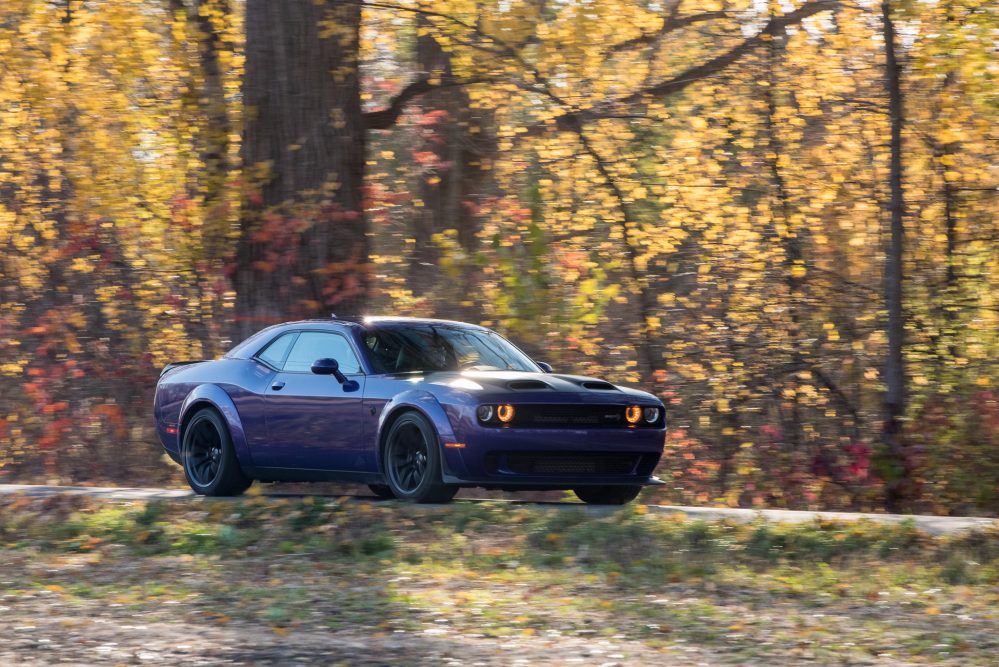 And don’t thing a Redeye is all about drag races, because it actually handles quite well. Of course, don’t expect this thing to corner like an Acura NSX or even a Golf GTI, but the levels of grip and the fantastic suspension setup actually allow this big guy to hit corners rather hard without fear of dying.  I  was  also  impressed  by  how  good  this  old  chassis  remains,  even  with  this  much  power. 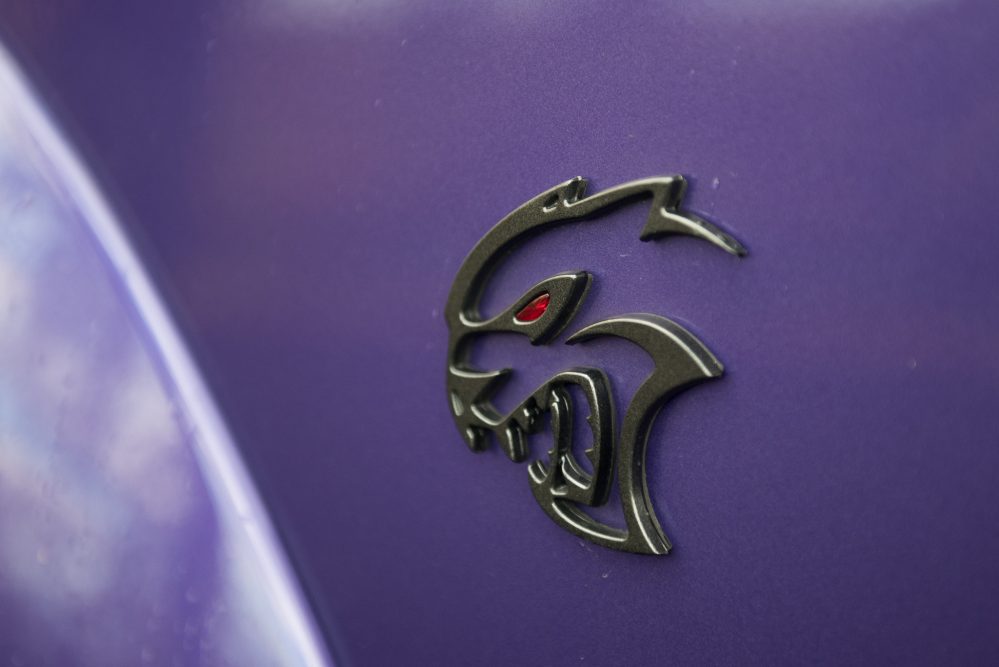 Down a curvy back road, the Challenger feels heavy and big, because it is, but you quickly realize that the massive tires and brakes allow you to carry speed tremendously fast. Just don’t slam the throttle in the apex, and you’ll do just fine. 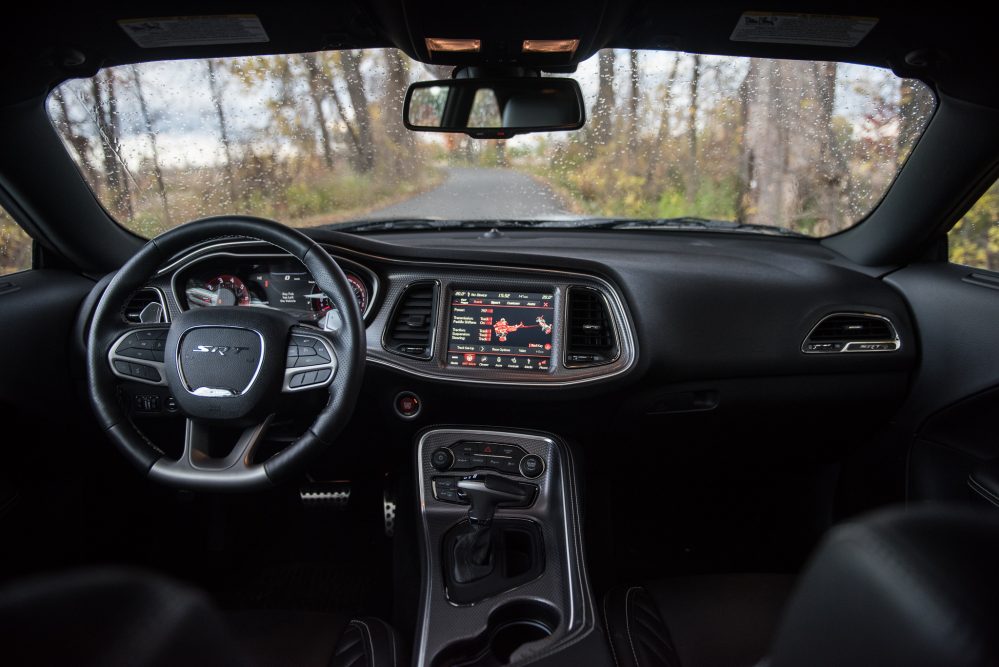 Still, though, who gives a shit? None of that matters either, because the 2019 Dodge Challenger Hellcat Redeye Widebody was never intended to outrun a BMW M4 on a twisty road, nor was it designed to win the tightest panel gap award. It was designed to make people smile.  And  it  wins  at  doing  that  hands  down. 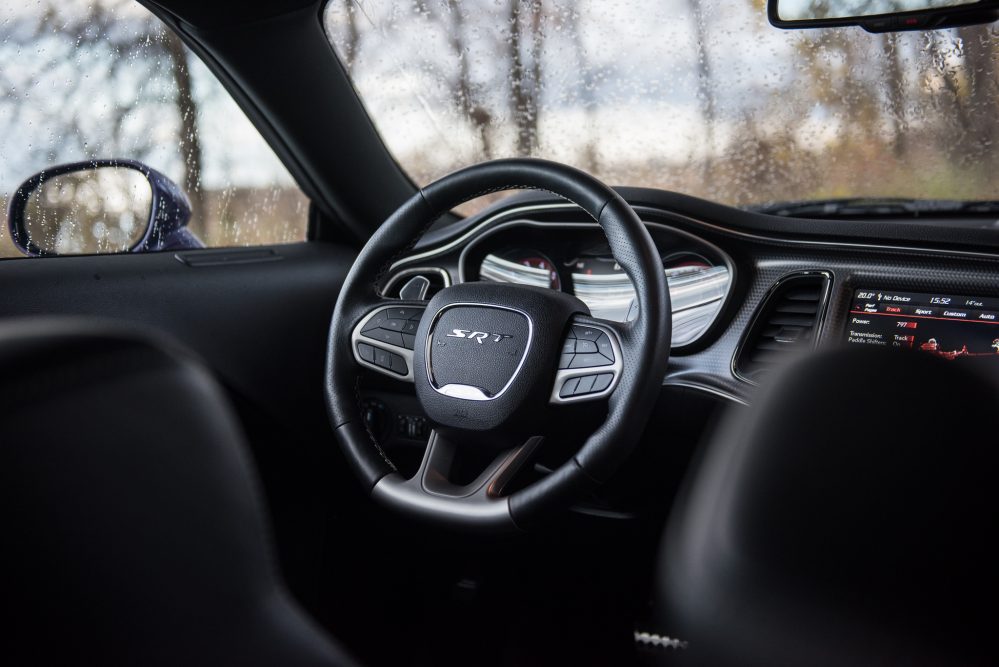 Everywhere I went with this thing, everyone absolutely adored it. And not just car people, kids, my neighbors, my 91-year-old grand-father and even some friends who currently drive electric cars.  How  can  anybody  not  love  this  thing? 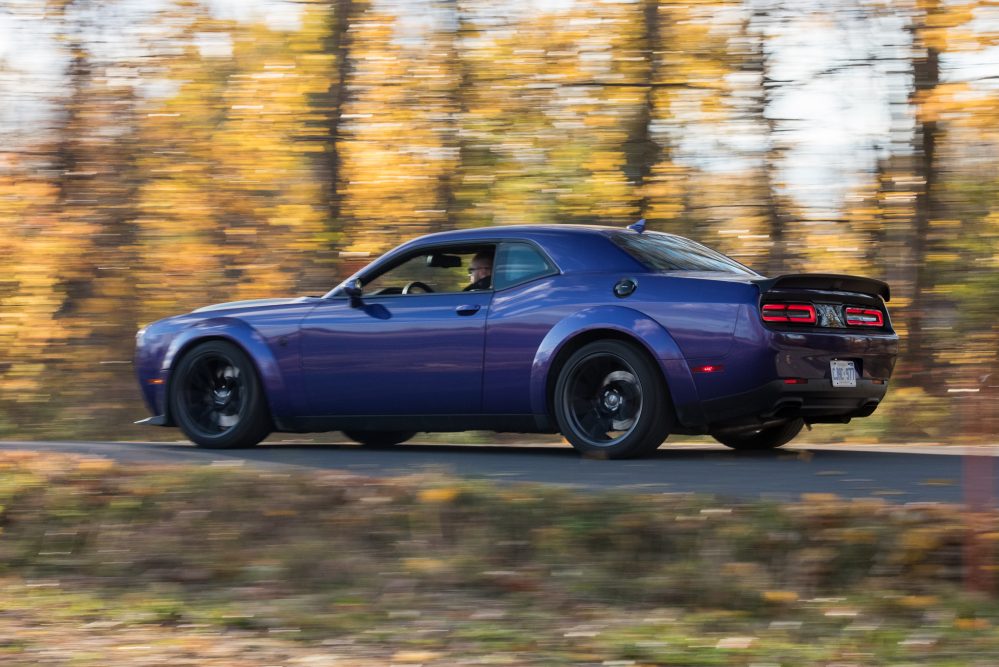 Essentially, what the Challenger is saying when it’s darting down the boulevard screaming high-pitched noises from its supercharger, shattering the tarmac from its thunderous torque, is that it doesn’t give a flying fuck about your problems. It doesn’t give a shit about your hypocrite claims to save the planet. It cares not that you’re having “climate” issues. It’s just here to have a good time and wants to bring you along for the ride. In my book, that’s enough to make it one of the most adorable automobiles on sale today.