2022 Hyundai Santa Cruz Proves The Pickup Truck Can Be Reinvented 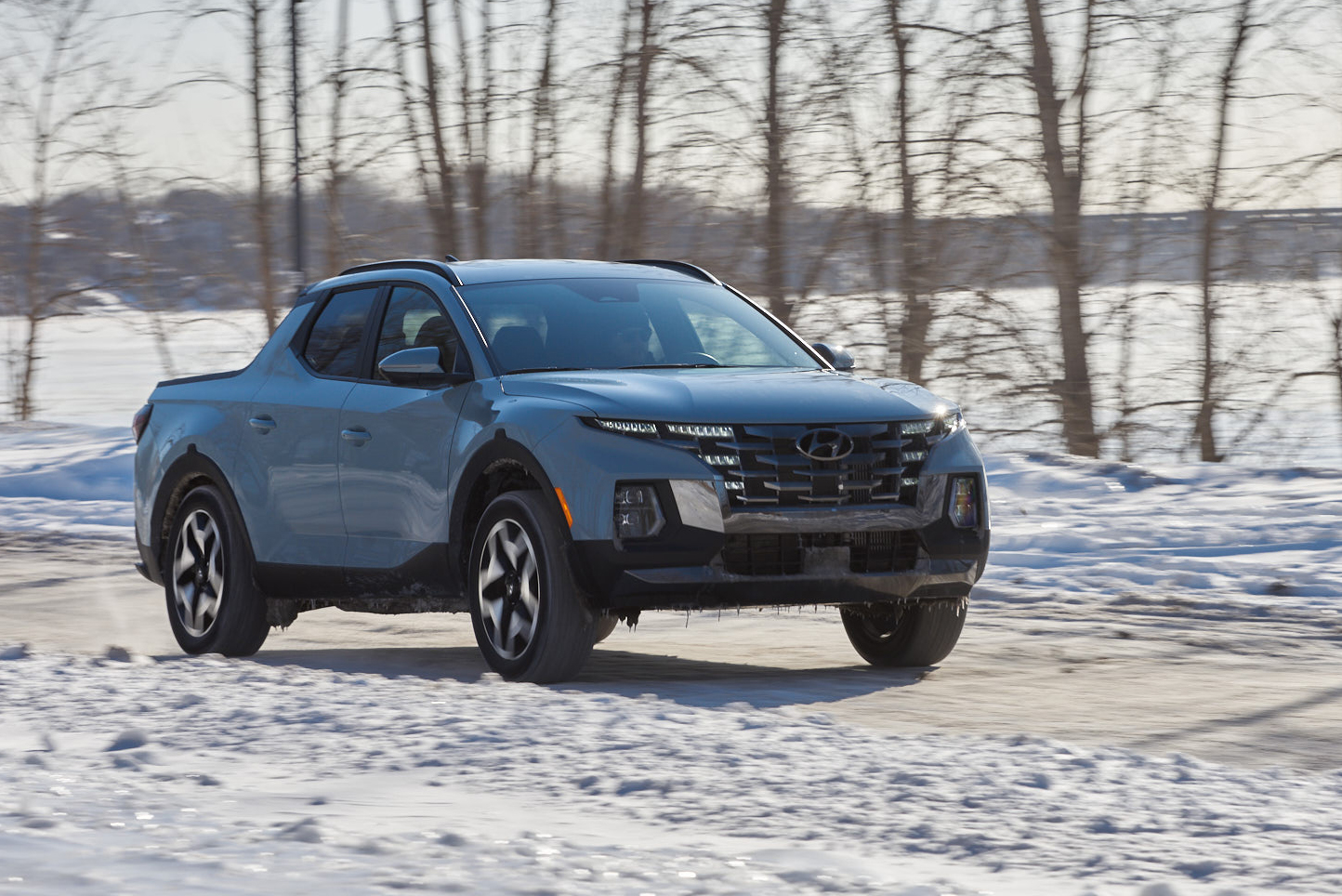 While it’s true that the 2022 Hyundai Santa Cruz is technically a direct rival to the Ford Maverick, it’s still a different type of pickup truck. It’s larger than the tiny Ford, but still considerably smaller than a Honda Ridgeline. Hyundai itself doesn’t even qualify this thing as a truck. It prefers calling it “an extension” of its SUV lineup. Call it whatever you want, the Santa Cruz is cool as hell. 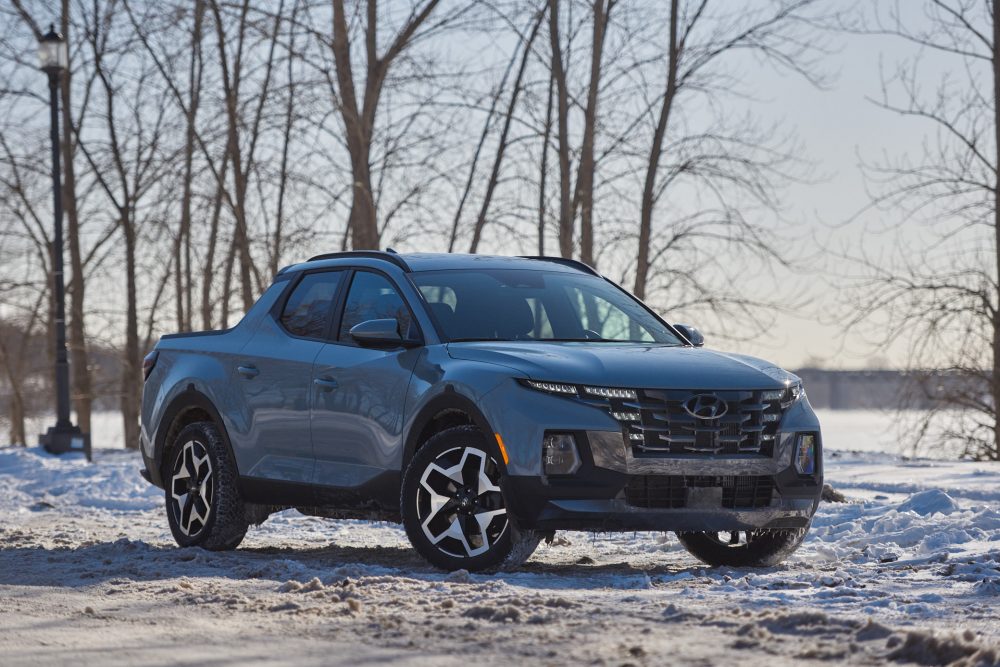 Yes, Hyundai’s rig is based on a car, just like the Maverick, but it looks a lot more like an SUV with a bed than an actual truck. Part of that comes from the fact that its front fascia takes inspiration from the Tucson. Although Hyundai says everything on the Santa Cruz is unique to this model. I personally love the stacked LED running lights incorporated within the grille. They make the thing look properly futuristic and like nothing else on the road. 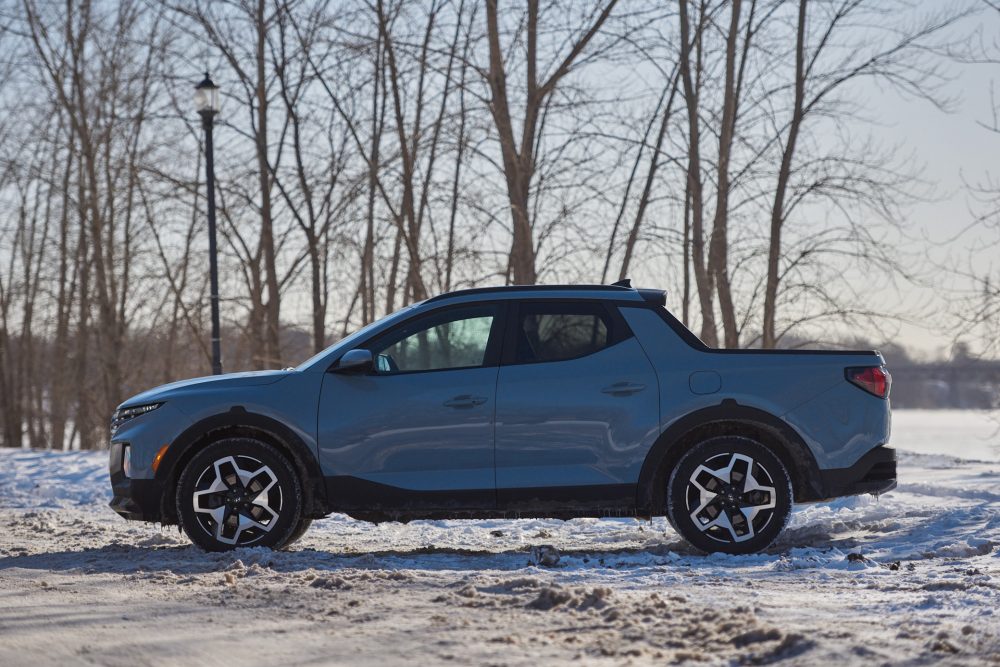 What further accentuates this sense of being a car with a bed is the way the 2022 Hyundai Santa Cruz’s styling wraps around towards the rear. The cab – which is actually fake – doesn’t end abruptly like on a conventional truck. Instead, it slopes rearward in a coupe-like matter, very much like the first-generation Honda Ridgeline. This, along with a ride height that isn’t much higher than some lifted station wagons, gives the Santa Cruz some Subaru Baja feels. 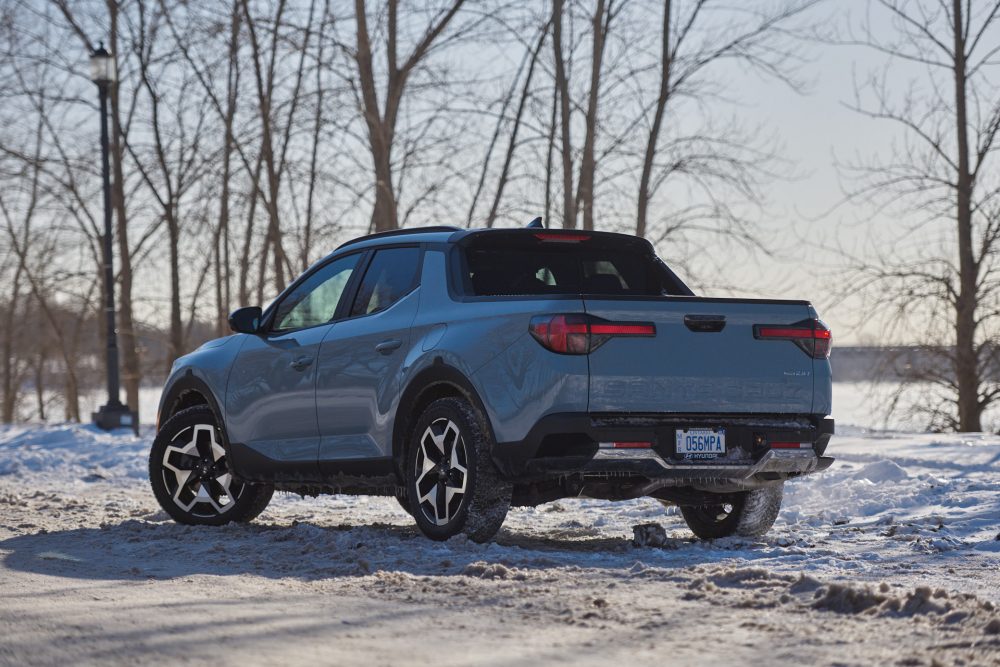 The Santa Cruz rides on a Hyundai Tucson platform alright, but it’s been reinforced at key areas to withstand light truck duties. Hyundai’s trucklet is also 77-mm wider and 340-mm longer than the crossover on which it’s based. Its dampers are larger, with hydraulic self-leveling technology out the rear. Hyundai then gave the Santa Cruz larger front brakes to cope with towing realities. 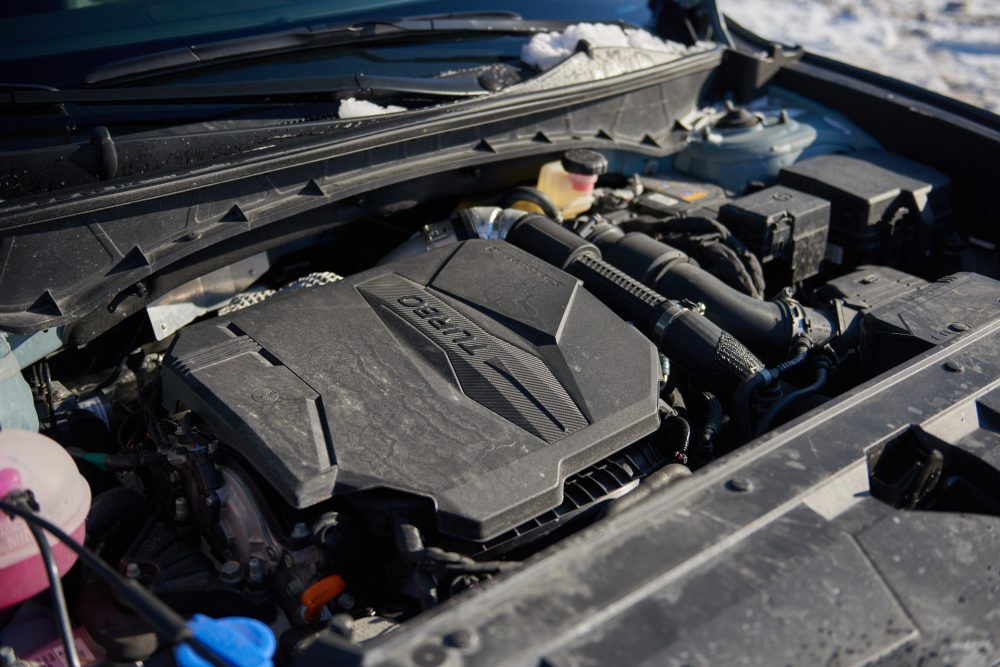 Power comes a from a turbocharged 2.5-liter four-cylinder engine sourced out of a Sonata N Line. It’s good for a stout 281 horsepower and 311 lb-ft of torque, besting both the Ford’s turbocharged four and the Honda’s naturally aspirated V6. The sole transmission option is an eight-speed dual-clutch automatic. All Santa Cruzes sold in Canada come standard with all-wheel drive. 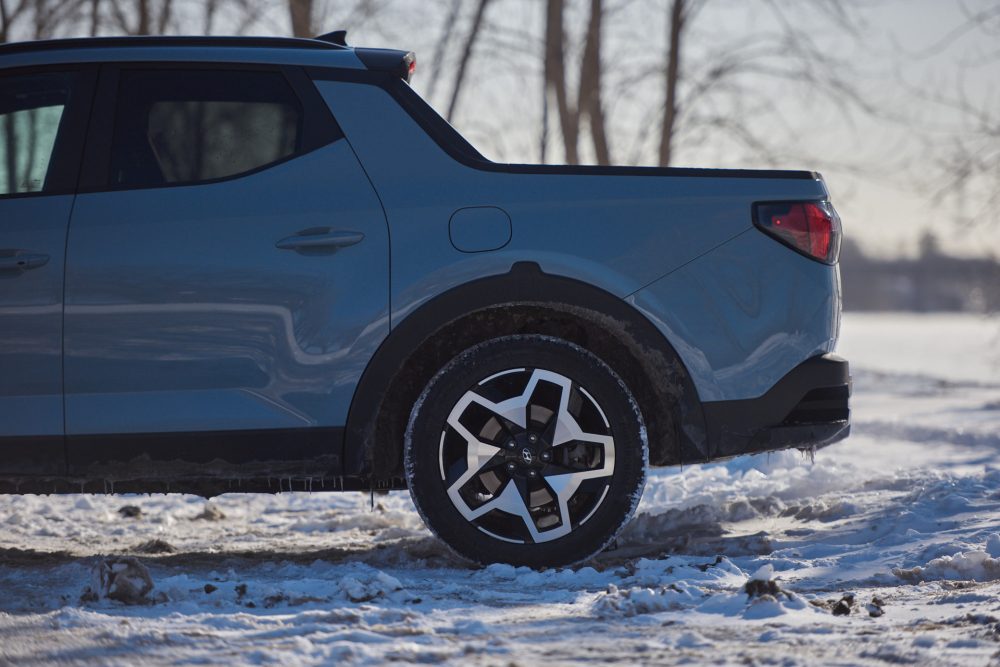 Hyundai claims its city truck can tow up to 5,000 pounds, on par with a Ridgeline, and a maximum payload rating of 1,785 pounds. The Santa Cruz only comes in one configuration: four doors with a 4.4-foot bed. Pricing kicks off at $40,655 for a “base” Preferred model. My tester was a top-flight Ultimate sold at $46,955. The Santa Cruz is therefore considerably more expensive than a Maverick. 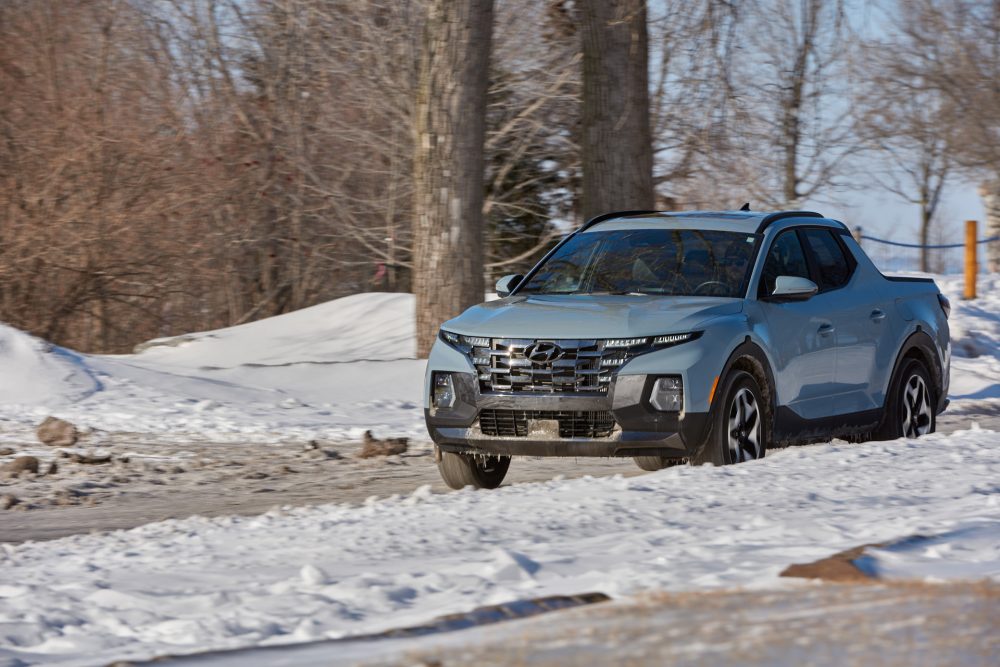 “Sporty” really is the best way to describe the way the Santa Cruz drives. No, it’s not a performance machine, but within the unibody truck crowd, it’s clearly the most energetic of the pack. While the Ridgeline loves to sing glorious VTEC snarls, the Santa Cruz puts the power down without apology, churning out massive turbo torque along the way. What this engine lacks in finesse, it makes up for it by being a tower of power once boost kicks in. It doesn’t need to rev much to extract everything it has in stock. Luckily, that transmission rapidly shuffles through the gears to adequately exploit the available powerband. 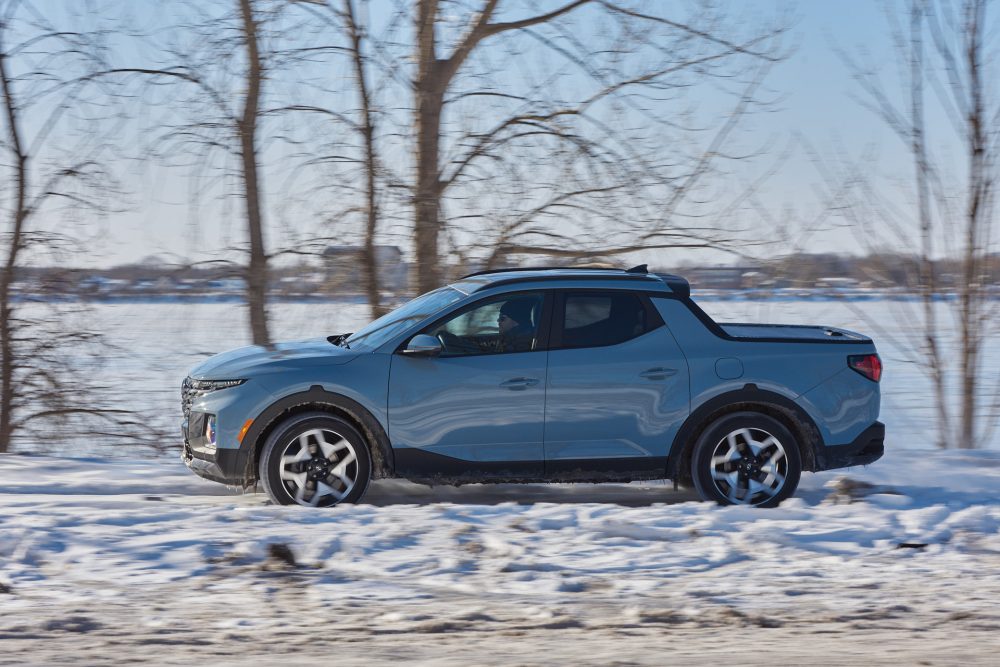 But that gearbox only works when pushing the Santa Cruz hard. During casual driving, it’s plagued with a jagged feel and lags when dumping the throttle. Hyundai wanted to give its truck some off-the-line performance by opting for this transmission, and it definitely allows the Santa Cruz to be quick as fuck. But it’s not the segment’s most daily driveable setup. 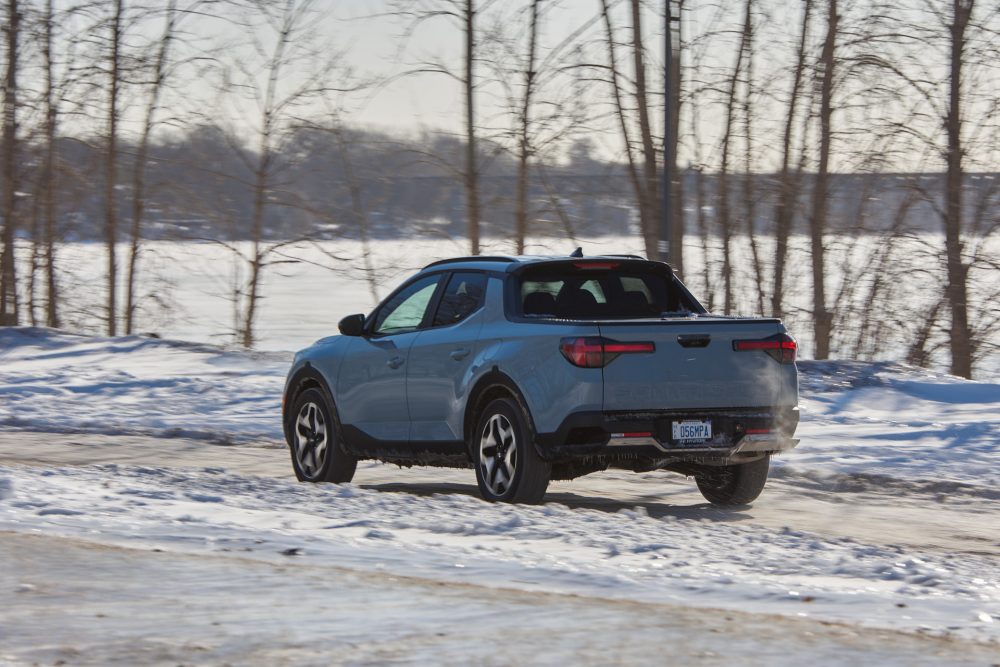 Handling is also a Santa Cruz strongpoint. There’s a solid chassis that never flexes nor wobbles over road imperfections. Handling is neutral, with a secure, planted feel on the road. In the snow, the Santa Cruz will perform cute power slides with traction control turned off, but the front-bias setup ruins the fun at times. One really needs to commit by slamming the throttle and turning the wheel for it to drift. 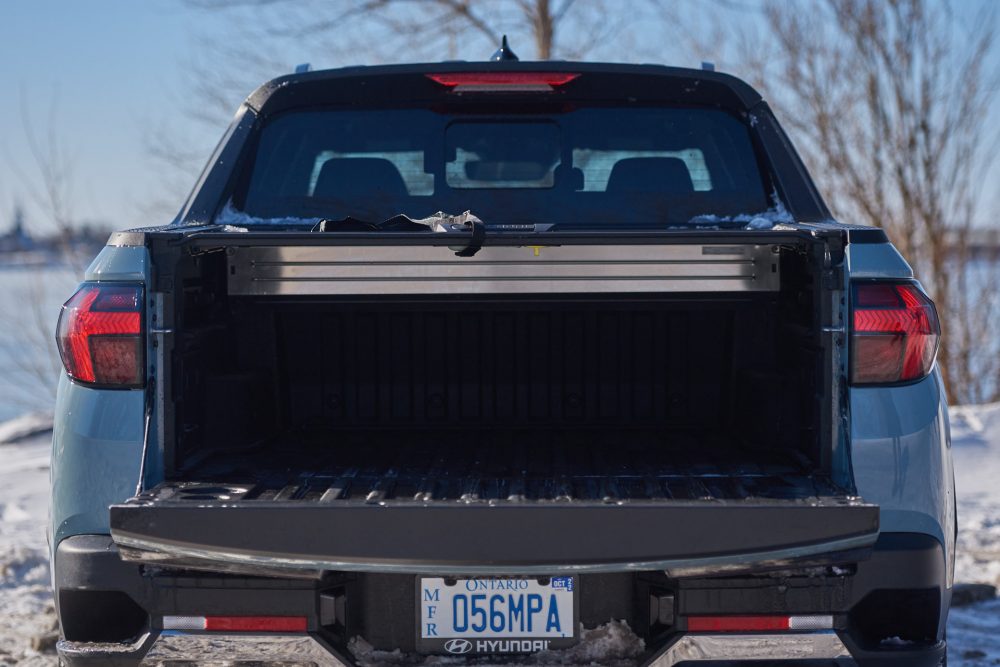 In many respects, the 2022 Hyundai Santa Cruz tries to copy the Ridgeline in terms of storage solutions and cargo space. Like the Honda, there’s a large in-bed storage compartment with drain plugs for tailgate parties. Hyundai also gives you a standard bed cover so it doesn’t fill up with snow, but it doesn’t include an integrated audio system like Honda does. 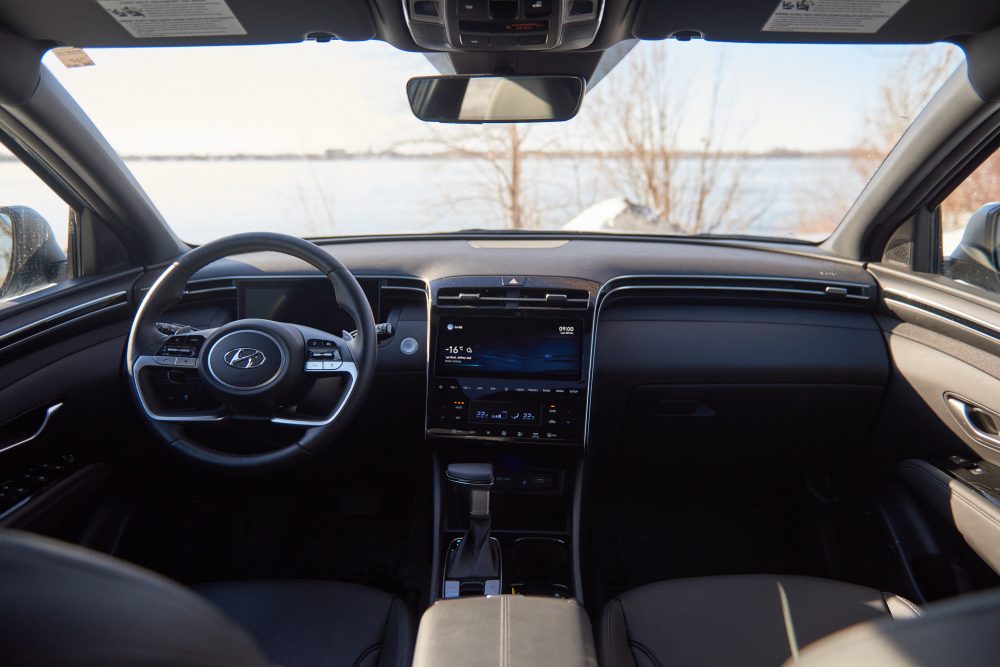 Inside, the Santa Cruz continues with its Tucson-inspired look. There’s a clean, futuristic dashboard design with fully digital gauges and haptic feedback controls for the climate control unit and infotainment system. The controls work somewhat well, but remain frustratingly flawed during winter when wearing a pair of gloves. The Santa Cruz’ cabin also doesn’t boast the same level of storage as in the Maverick or Ridgeline. That center console storage unit, for instance, is way too tiny to be fitted to a truck. 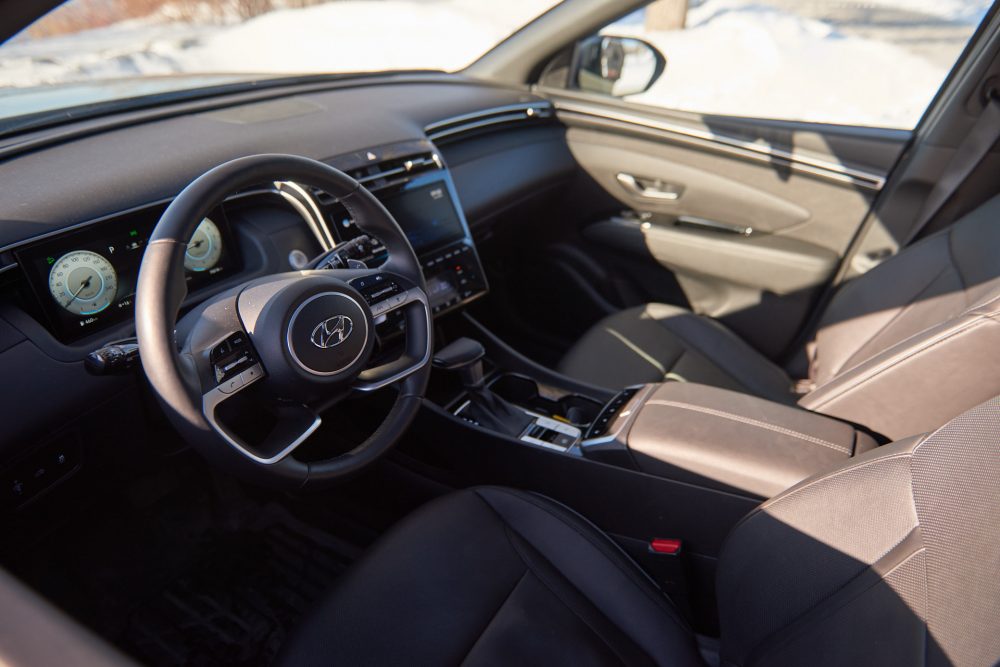 Yes, Hyundai gives you the classic lift the rear seat up for added storage trick, but the Santa Cruz’ narrow dimensions lead to less cargo space than in the Honda. Rear leg clearance is also considerably shorter here due to this vehicle’s compact bones. Luckily, the front area is spacious and comfortable. The Santa Cruz is also loaded with neat toys like Hyundai’s nearly flawless semi-autonomous driving technology. 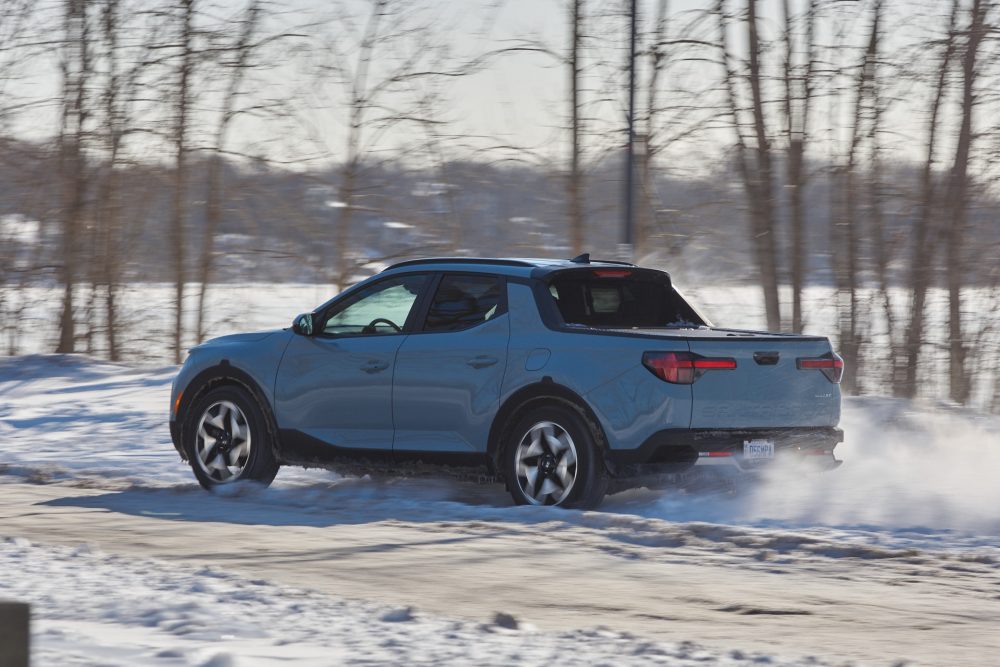 The 2022 Hyundai Santa Cruz is a compact crossover wearing a tiny little bed. That’s really what it comes out to. It doesn’t offer the utility of a midsize truck, nor does it come with the low price tag of a compact city truck. It’s definitely an oddball in the truck segment, proof that these vehicles can indeed be reinvented. While there’s nothing about a Santa Cruz that makes sense from a rational standpoint, it’s one heck of a fun and desirable vehicle, one that attracted several eyeballs and questions during the time I had it. How many trucks can brag about that?