2022 Honda Ridgeline Is Now The King Of Unibody Trucks 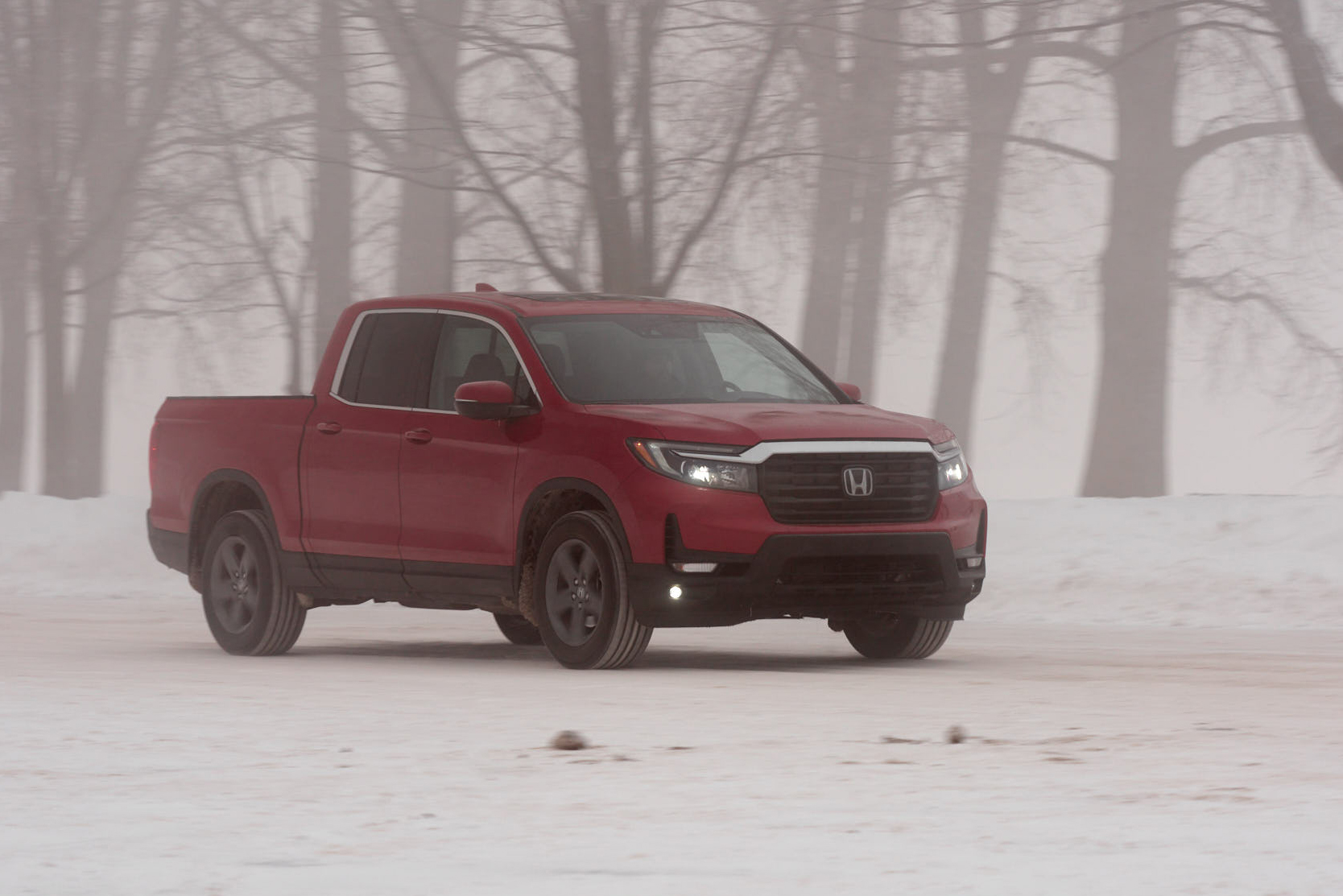 The 2022 Honda Ridgeline used to be alone on its rock due to its weird unibody configuration, but with the arrival of even weirder car-based trucklets like the Ford Maverick and Hyundai Santa Cruz, Honda is no longer alone in this space. What was once considered as the weak truck of the midsize truck segment is now the bully of the unibody world. 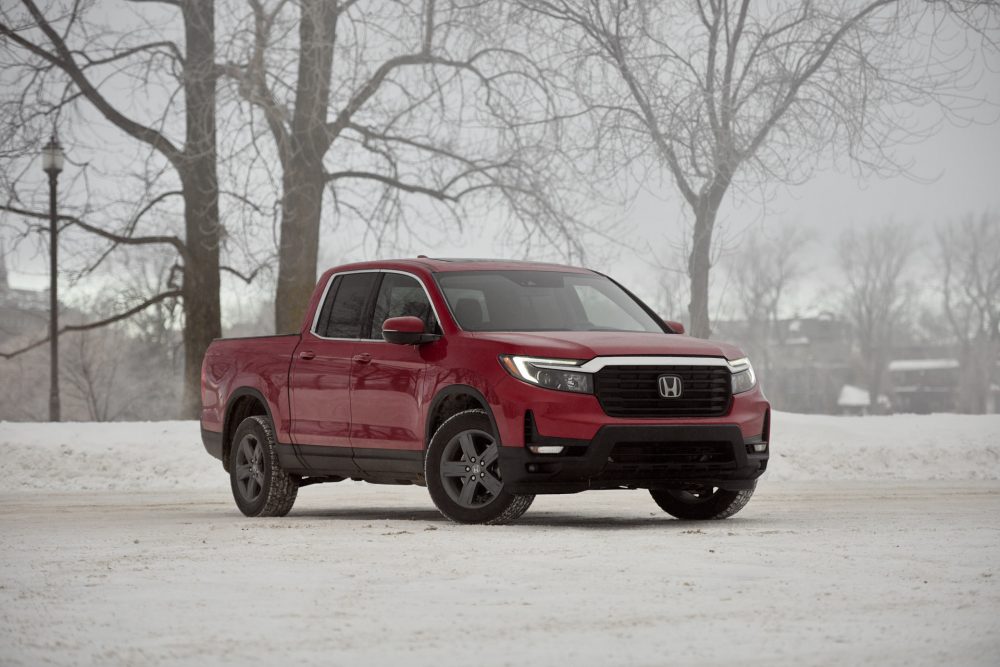 The Ridgeline’s new rivals come at the same time Honda significantly facelifted its truck. Everything from the A pillar forward is all-new, with a much more truck-like demeanor. More importantly, the Ridgeline no longer looks like a Pilot Sport Track, but rather looks sharp now and a tad more rugged. New paint colors and wheels were also added to the mix, as well as few changes inside. 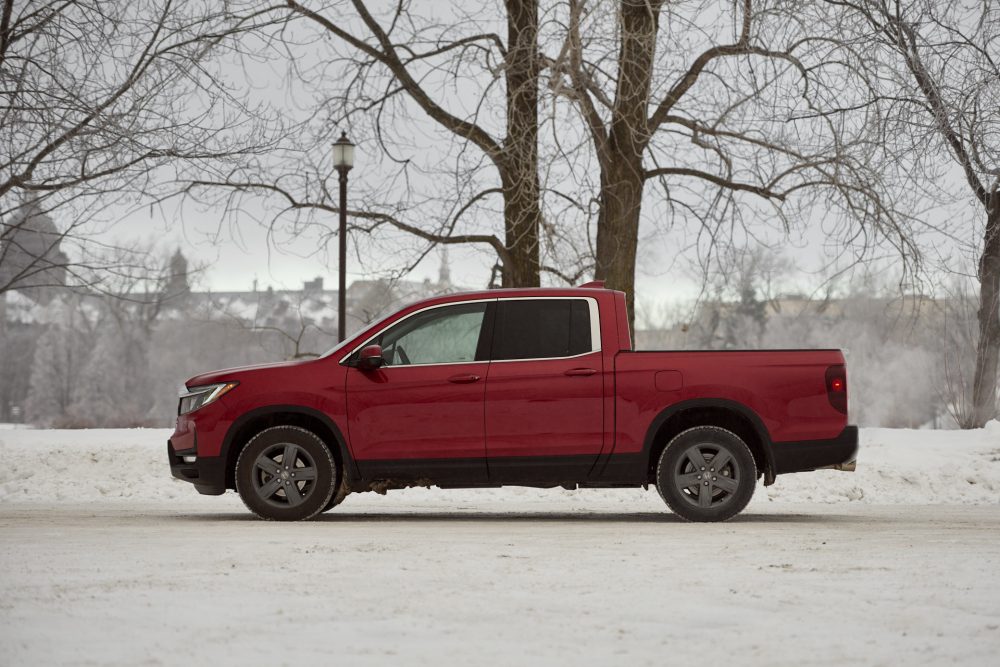 Mind you, the Ridgeline is still very much a midsize truck, meaning it’s a larger rig than both the Maverick and the Santa Cruz. It competes directly with vehicles like the Ford Ranger, Chevrolet Colorado/GMC Canyon, Toyota Tacoma, Nissan Frontier and Jeep Gladiator. But since it’s not built on a steel frame, it kind of plays in both compact and midsize camps now. 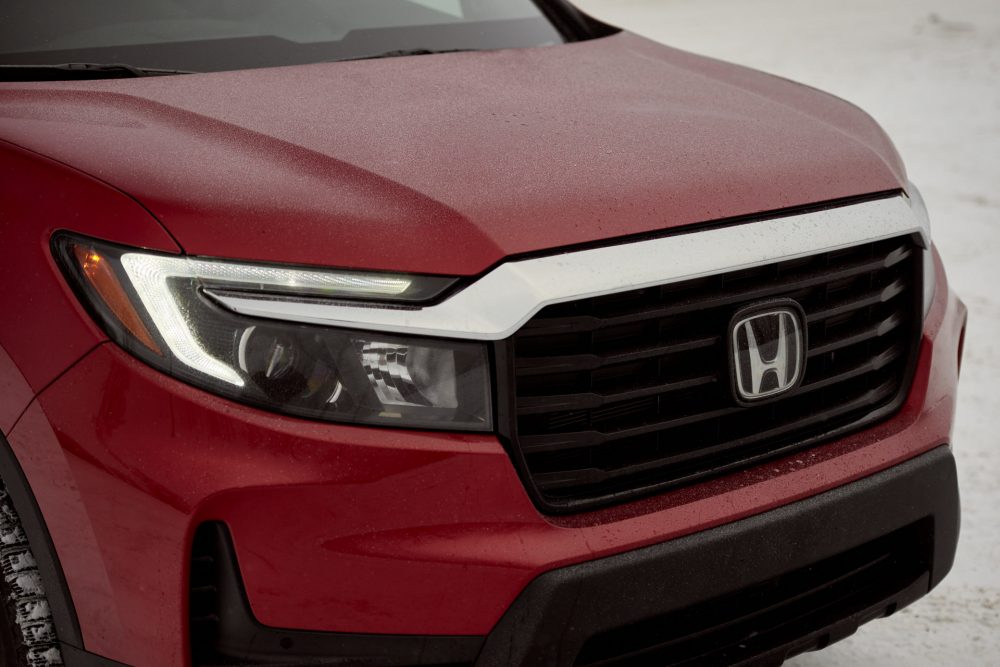 Mechanically, the Ridgeline stays exactly the same, meaning it still rides on a modified Honda Pilot platform and it’s powered by Honda’s tried and proven 3.5-liter V6. Power and torque are still rated at a healthy 280 horsepower and 260 lb-ft . Installed transversally inside the engine bay (LOL), it’s mated to a nine-speed automatic gearbox and continuously sends power to all four wheels through Honda’s iVTM-4 AWD system. Such specifications allow the Ridgeline to tow up to 5,000 pounds, the lowest rating in the midsize truck segment. That’s on par with the Hyundai Santa Cruz, but 1,000 pounds higher than the Ford Maverick. 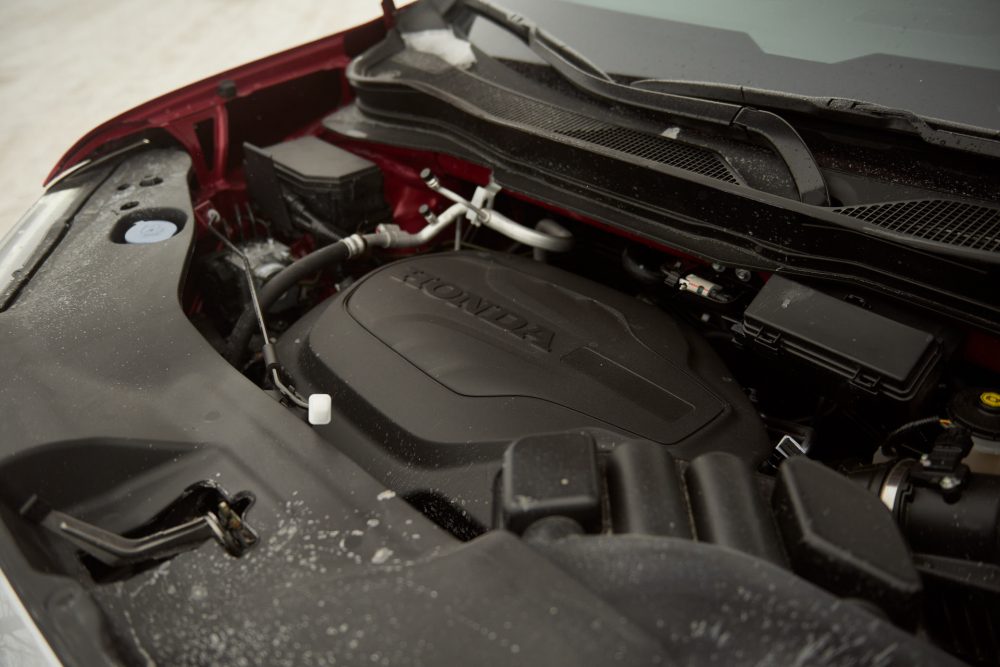 The 2022 Honda Ridgeline continues to be a ridiculously expensive truck, knocking at the door of some full-size models. It kicks off at $50,520 for a base EX-L, and ends at $56,520 for a Black Edition. My tester was a Touring. It sits in the middle of three available versions at $54,720. You could get a decent Ford F-150 for that kind of money. 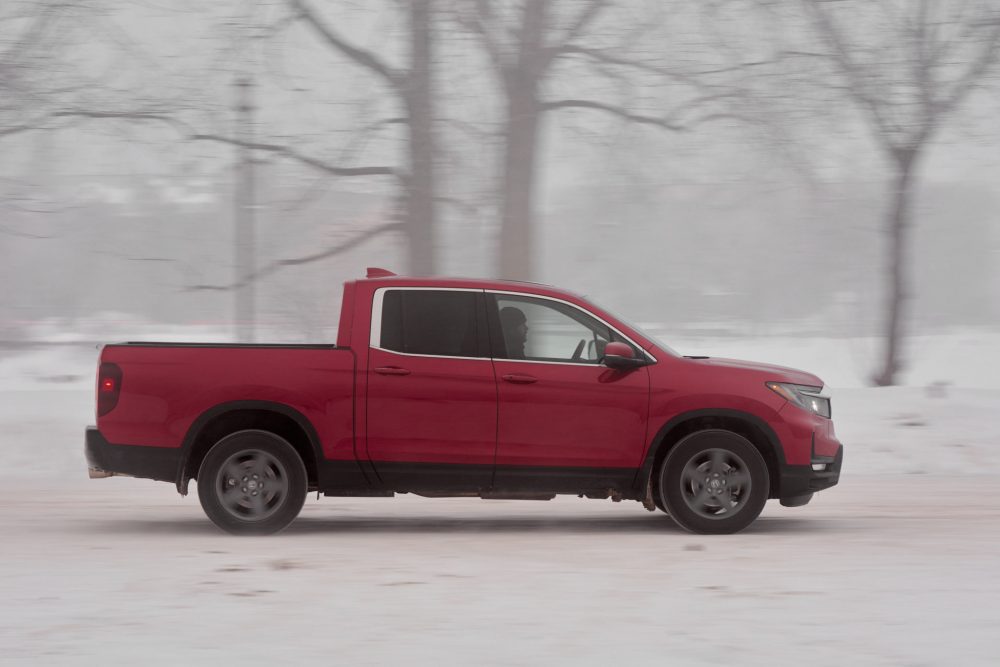 Driving the Ridgeline after the Maverick and Santa Cruz (review coming soon) was a revelation as to how good Honda’s truck still is. As a matter of fact, I have always loved the Ridgeline’s overall execution. While it’s easy to get hung up on numbers alone, once you strap yourself behind the wheel of these things, it’s hard to give away the keys. 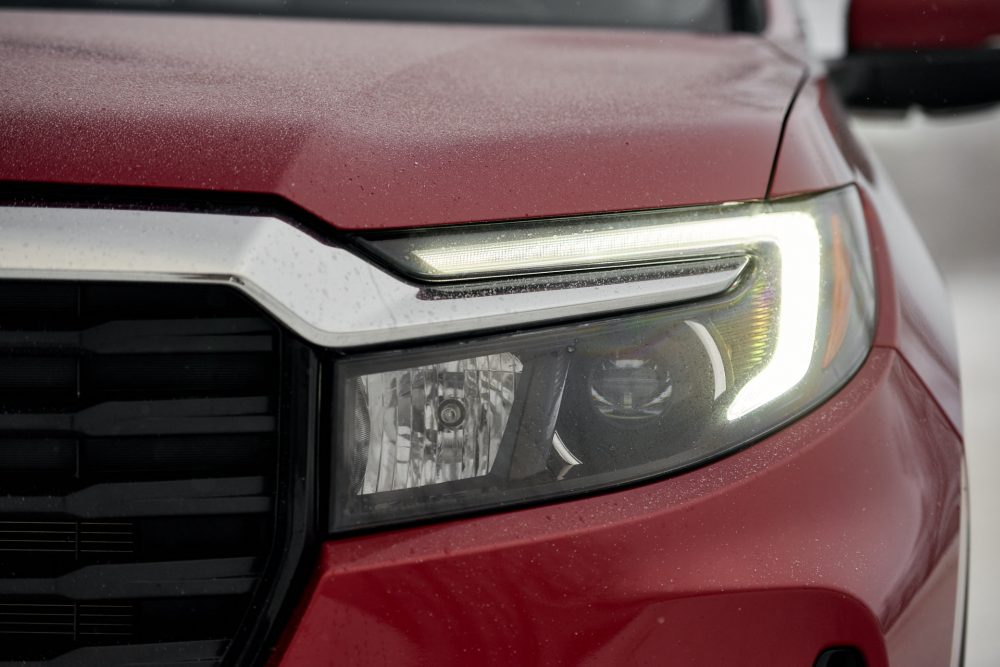 Because what the Ridgeline lacks in brute force, it makes up for it by its clever use of interior space, witty storage compartments and class-leading road manners. Since it’s essentially a large car with a bed, it handles precisely like one. Enter a corner quickly with the Ridgeline, and it’s nice and stable, buttoned down and actually feels sporty. There are no unwanted body motions caused by a body bolted onto a frame. 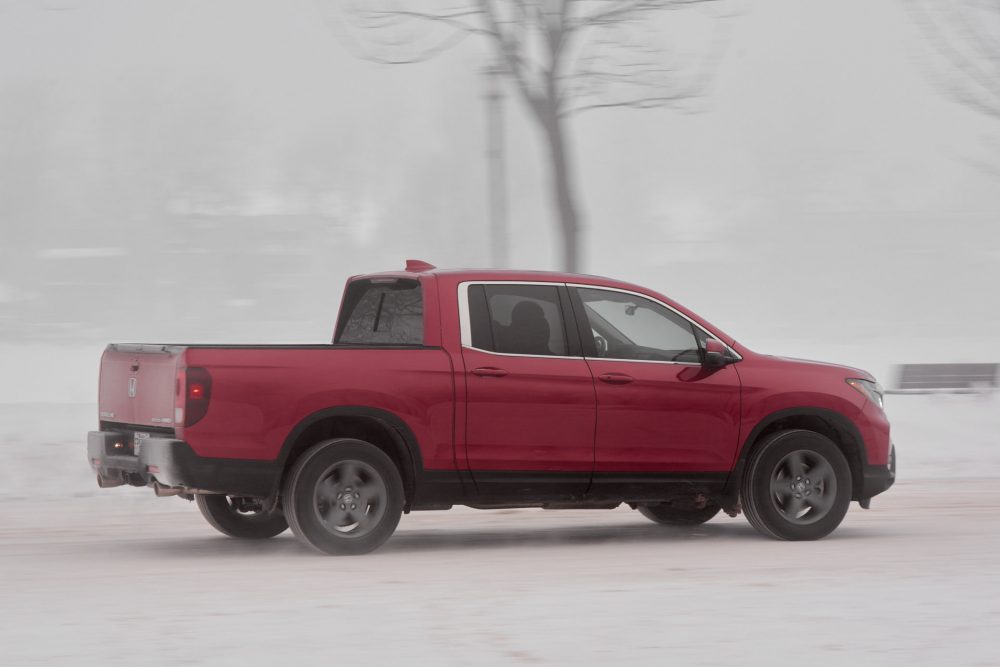 Meanwhile, that V6 engine takes care of the heavy lifting. It’s a gem of an engine, one that lacks low-end torque, but immediately starts emitting glorious intake snarls as it climbs through the powerband. And once it skips 5,000 rpm, the fuckin thing starts screaming as if it’s about to jump out of the hood. That’s because VTEC just kicked in yo. The Ridgeline is quick by any measure, and always enjoyable to drive. 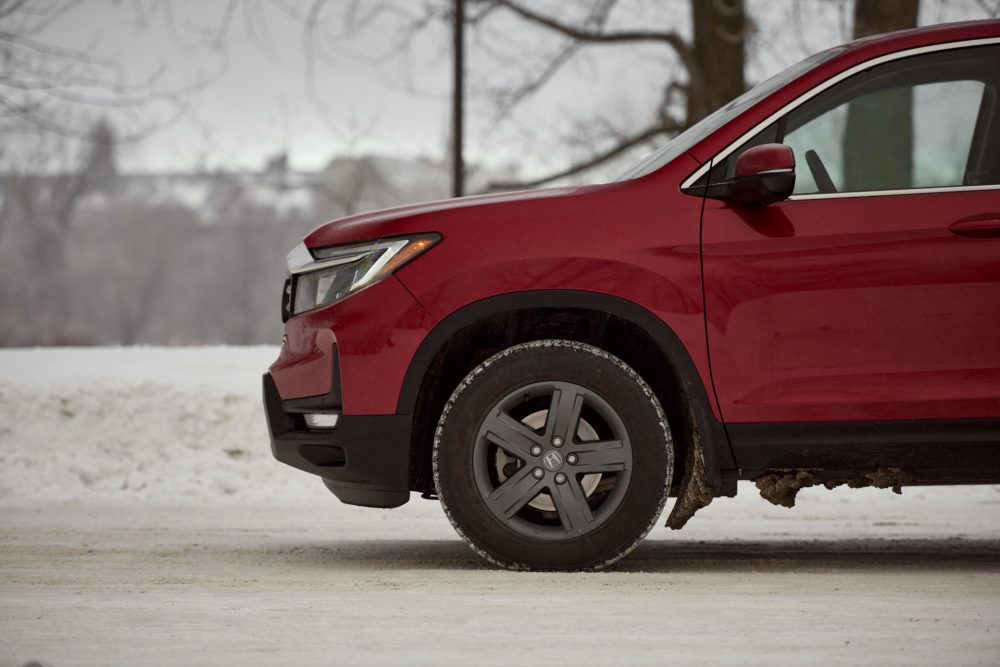 Unfortunately, the ZF-sourced 9-speed transmission that’s bolted on to it doesn’t operate with the same fluidity. It only seems to work well when it’s warm and well lubricated. Catch it not long after a cold start morning, and it’ll lag when asked to downshift. In some cases, my Ridgeline simply refused to move when I hit the throttle. 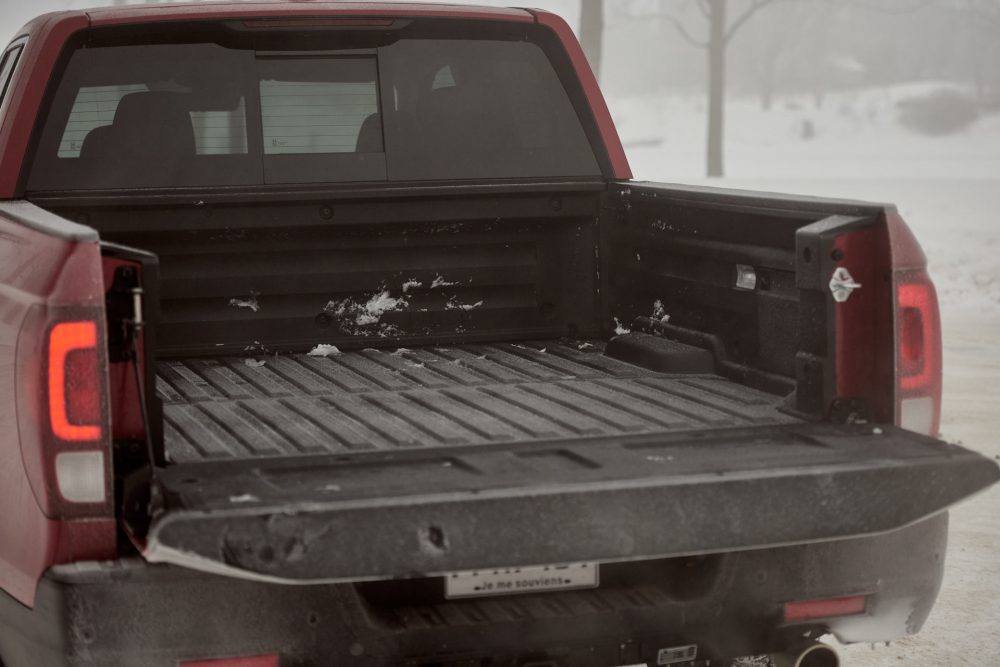 While it’s true that this Honda only comes with a 5.3-foot bed, what’s cool is that the bed itself incorporates a hidden storage compartment in its floor. On its own, it can haul up to 200 liters of your gear, or about half the size of a Honda Civic’s trunk. It even has drain plugs if you want to use it as a cooler during a tailgate party. The Ridgeline even has speakers integrated in its bed for ultimate outdoor fun. 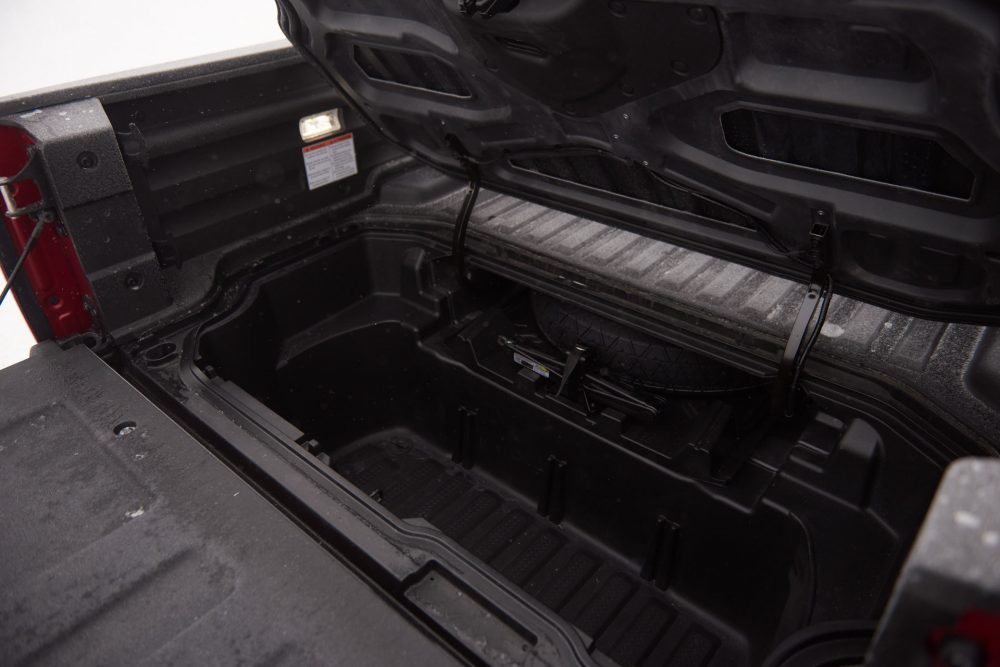 The thing is, Honda originally conceived the Ridgeline so its customers can haul their recreational vehicles, things like Honda’s own ATVs and dirt bikes. In that respect, it seems perfectly suited for that kind of labor, just the right size and the right amount of cargo space. Need to get your dog inside but don’t want him to ruin your nice leather seats? The Ridgeline’s rear bench folds upward like in a Honda Fit, giving way to a huge section of free space thanks to a flat floor. 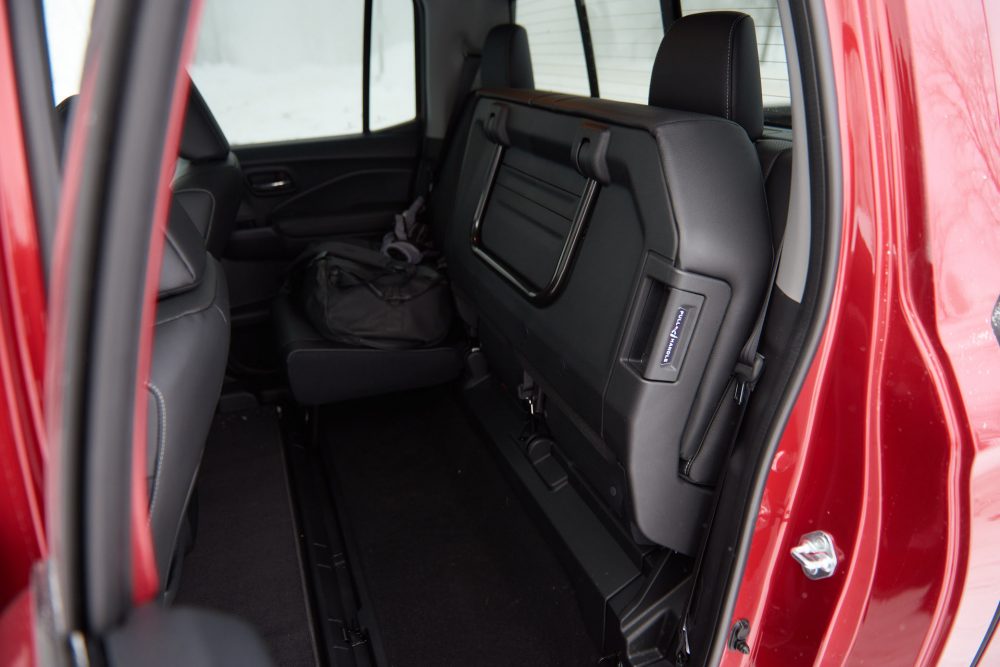 Inside, the Ridgeline carries over mostly unchanged. I continue to find this cabin too gray and too simple for my taste, but there’s no denying the excellent build quality and fit and finish. This truck can also be very well equipped, including everything from wireless phone charging to heated and cooling seats both front and rear. The cabin is huge thanks to the fact that it’s based on a Honda Pilot. Forward visibility is spot on. I totally dig the floating armrests, and rear head and leg clearance are above anything else in this class. 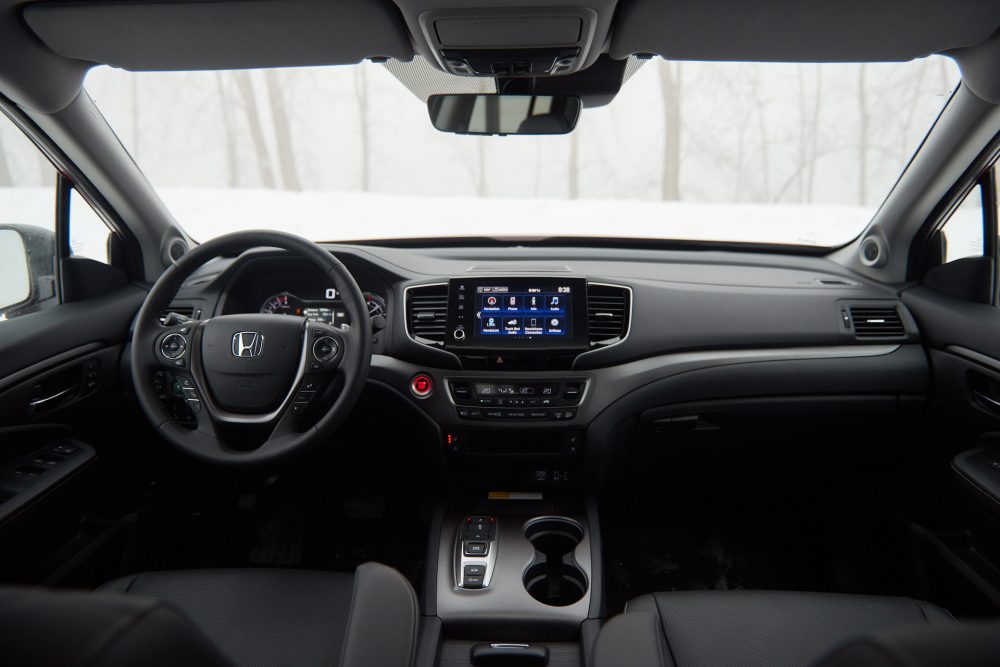 One of the updates Honda brought to the cabin is the addition of a volume knob for the infotainment system. It definitely helps making it easier to operate, but this remains a heavily dated system. The graphics themselves appear like something out of the mid-1990s, menus are hard to access and everything is slow to react. It’s an ergonomic disaster. At least it connected quickly to wireless Android Auto, another feature this system received in the update. 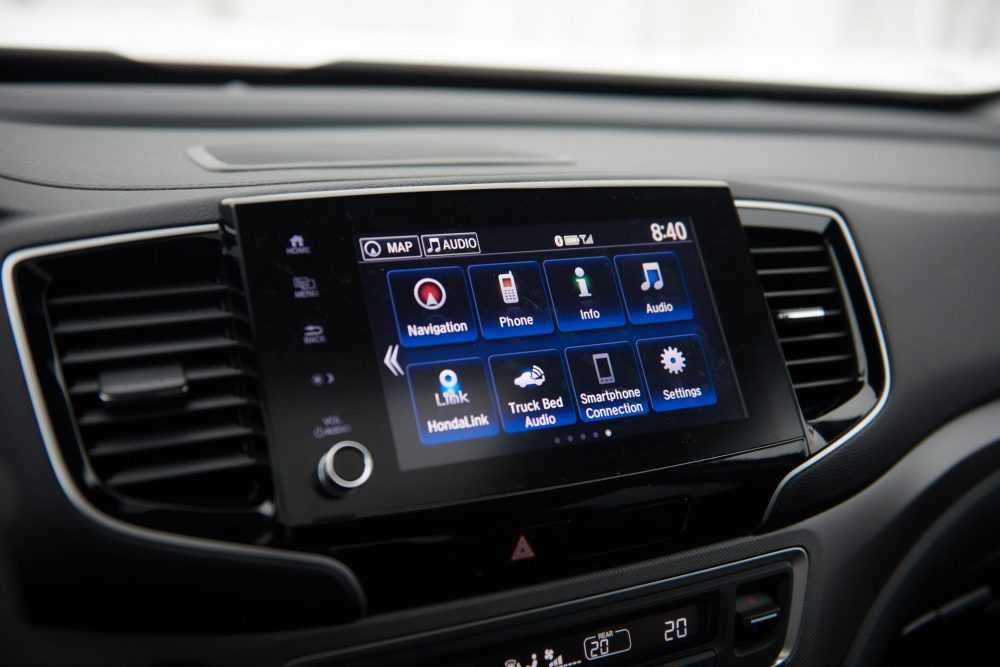 The audio system itself is fantastic though, and the center storage compartment, between the front seats, is gigantic. The Ridgeline also allows you to cycle through different drive modes. There’s a button next to the transmission that changes the traction control settings to Normal, Snow, Mud and Sand. Personally, I just remove traction control and smash the throttle to get myself out of a tricky situation. 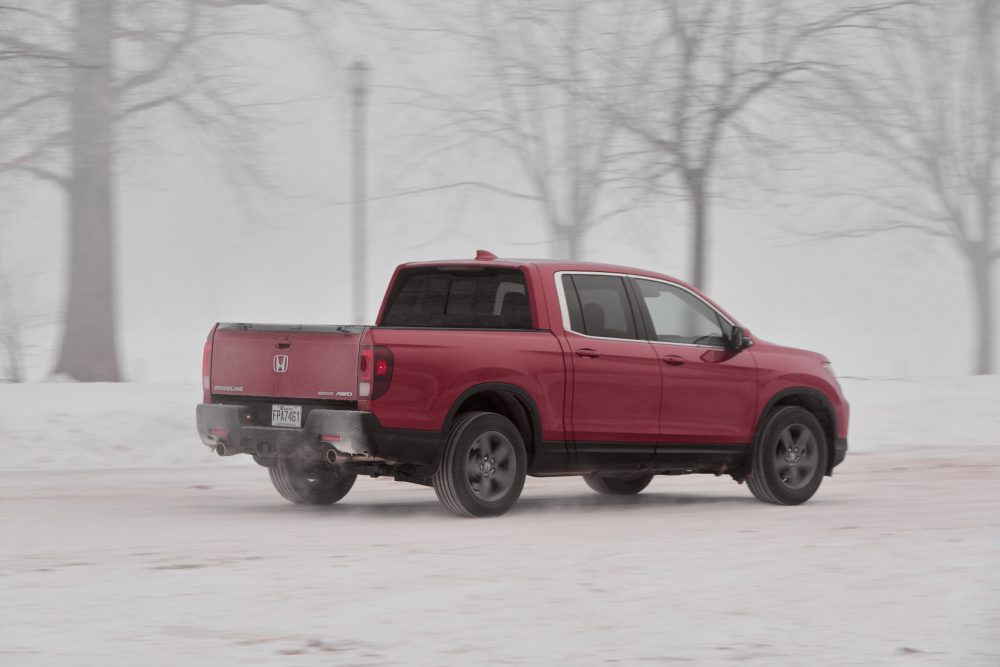 The 2022 Honda Ridgeline may appear weak against its body on frame competition, but it suddenly makes total sense against the new kids on the block. It’s fair to say Honda saw a trend coming when it decided to go down the unibody truck lane. It may have been bullied by the other dudes for over a decade, but it finally gets redemption thanks to even more carlike competitors. If you don’t need to tow 10,000 pounds, the Ridgeline is definitely worth considering, even if it costs an arm and a leg.