2023 Kia EV6 Is A Very Impressive EV For The Price 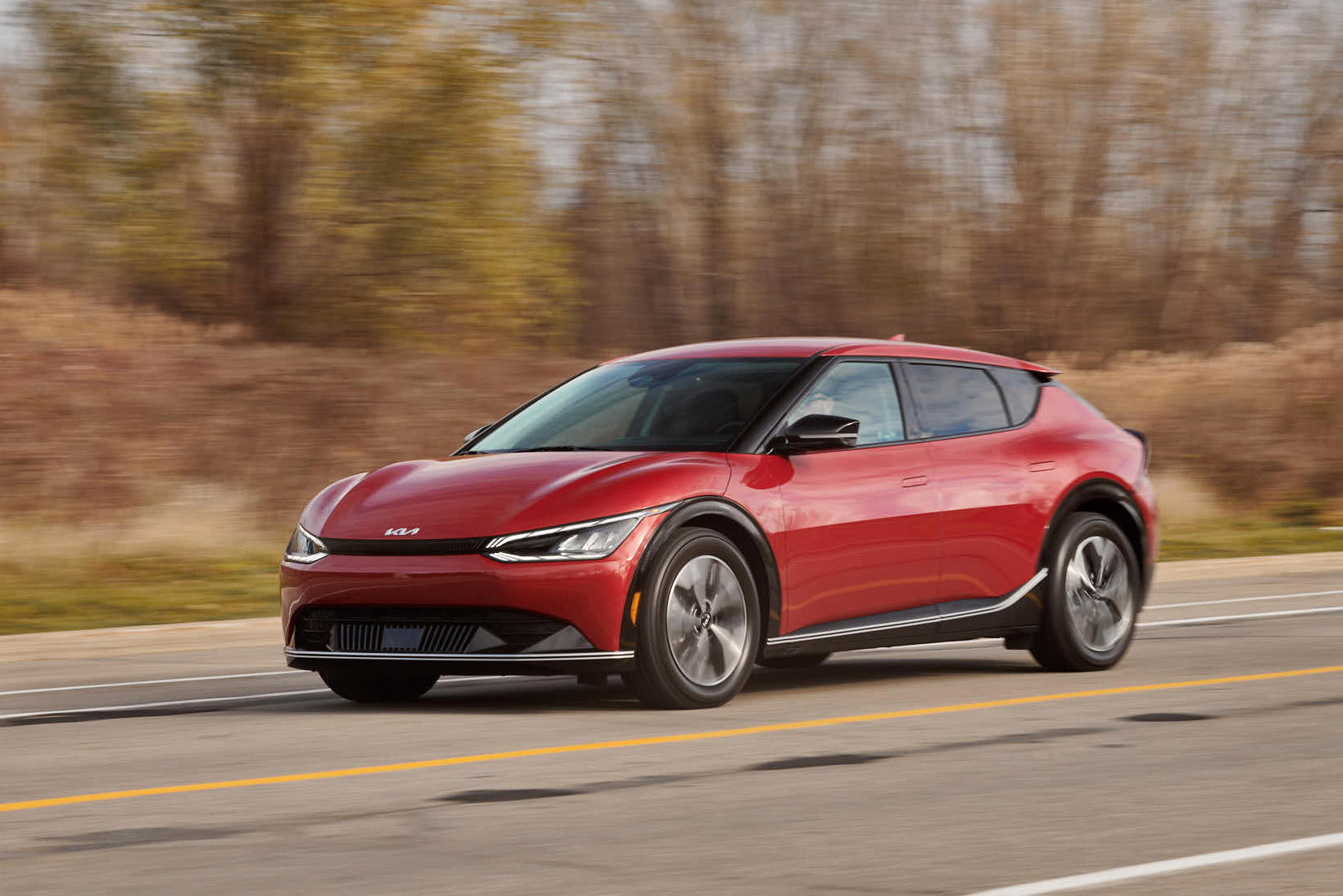 It isn’t the first time I drive the 2023 Kia EV6. I drove it during its North-American launch last spring in its GT-Line 2 trim. I then produced a video about an AWD Long Range model on my YouTube channel this summer (see below). In both cases, I absolutely loved it. As a matter of fact, I like this car so much, that I booked it a third time just to remind myself just how ahead of the pack the South-Korean carmakers have gotten. 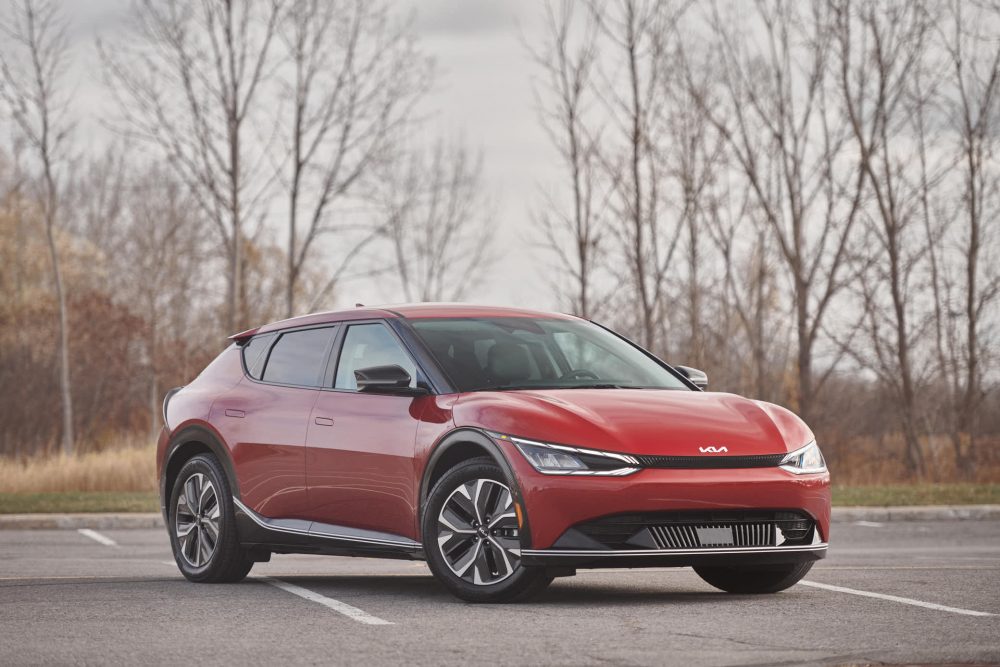 Of course, it’s impossible to write about the 2023 Kia EV6 without mentioning its equally impressive corporate twins, the Hyundai IONIQ 5 and the Genesis GV60. And honestly, if you were to ask me which one I prefer, I would answer all three. The truth of the matter is that no matter which one of these triplets you decide to buy, you simply can’t go wrong. They’re all fantastic. 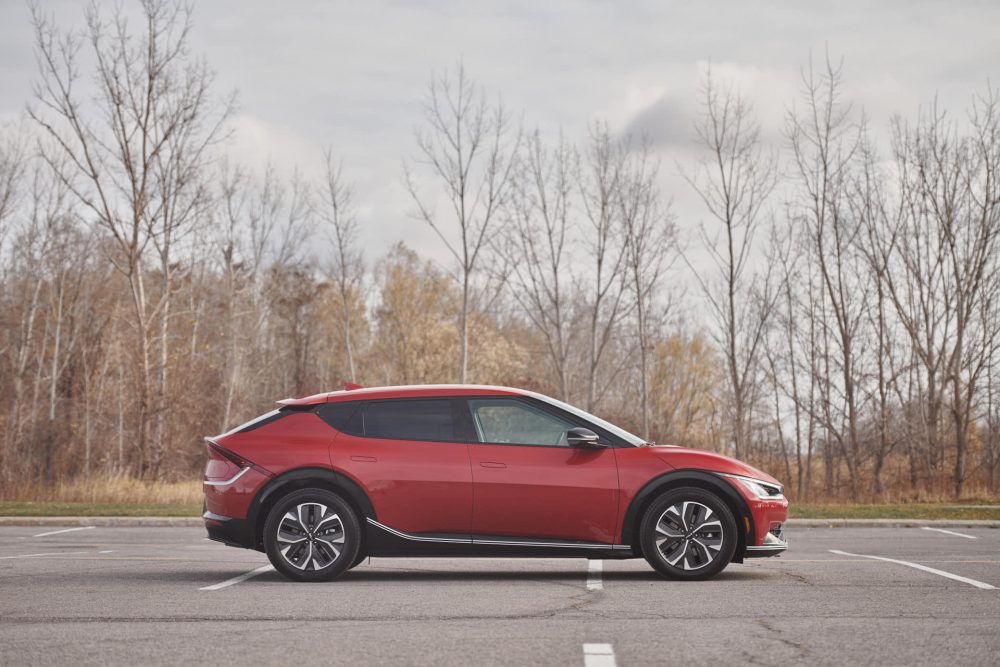 The EV6 has a few unique features of its own that I quite like. While the IONIQ 5’s design takes inspiration from the 1980s, this Kia looks into the future by being considerably more modern. It was designed by none other than Karim Habib. Like me, he’s from Montreal. Habib made his teeth at BMW before enjoying a short career at Infiniti. 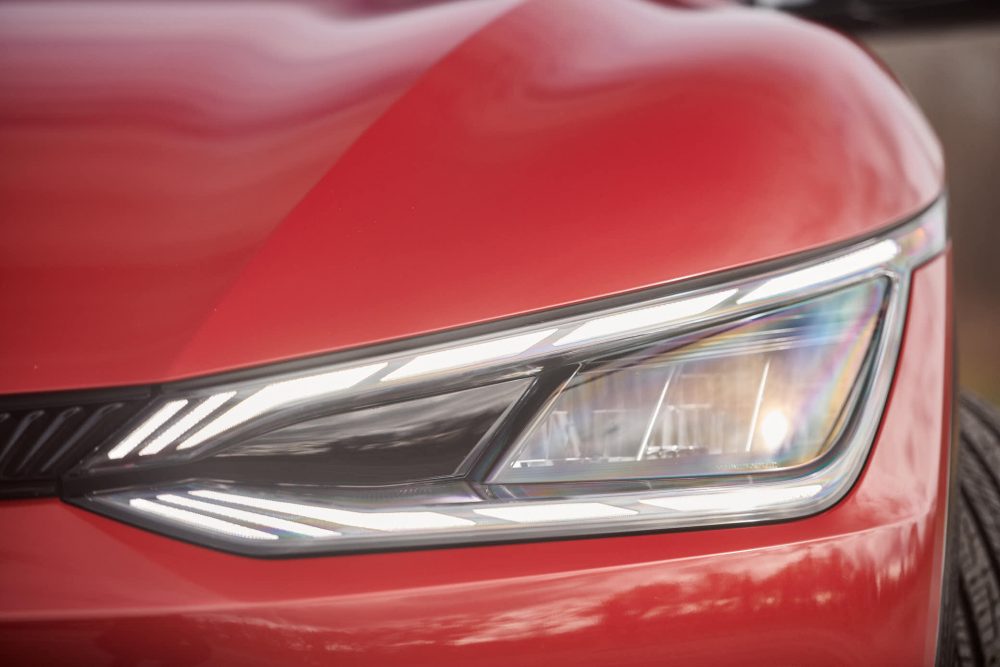 He drew cars like the BMW 7 Series and the Infiniti QX55. Under the “Opposites United” design philosophy, he gave the EV6 one hell of a polarizing look. Some hate the way it looks, others, like me, love it. But I do find this design only works when the car is fully loaded. In this spec, it looks somewhat naked. 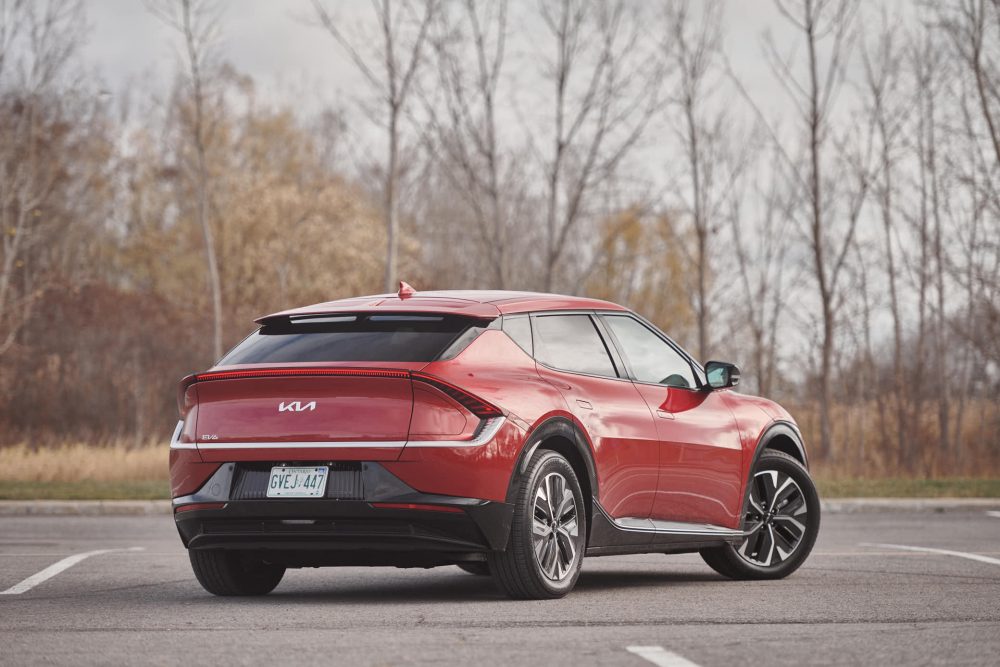 Like the IONIQ 5, this crossover tricks the eye by making you believe that it’s small, when it’s in fact rather massive. It’s about the same size as the new Kia Sportage, but its fastback configuration dwarfs some of the available cargo space.

It also doesn’t have a rear wiper like the Hyundai, but because that rear window is slightly more slanted than on the IONIQ 5, it’s not as annoying when it’s raining or snowing. That said, the person who decided to approve a hatchback type vehicle without a rear wiper is sort of a moron. 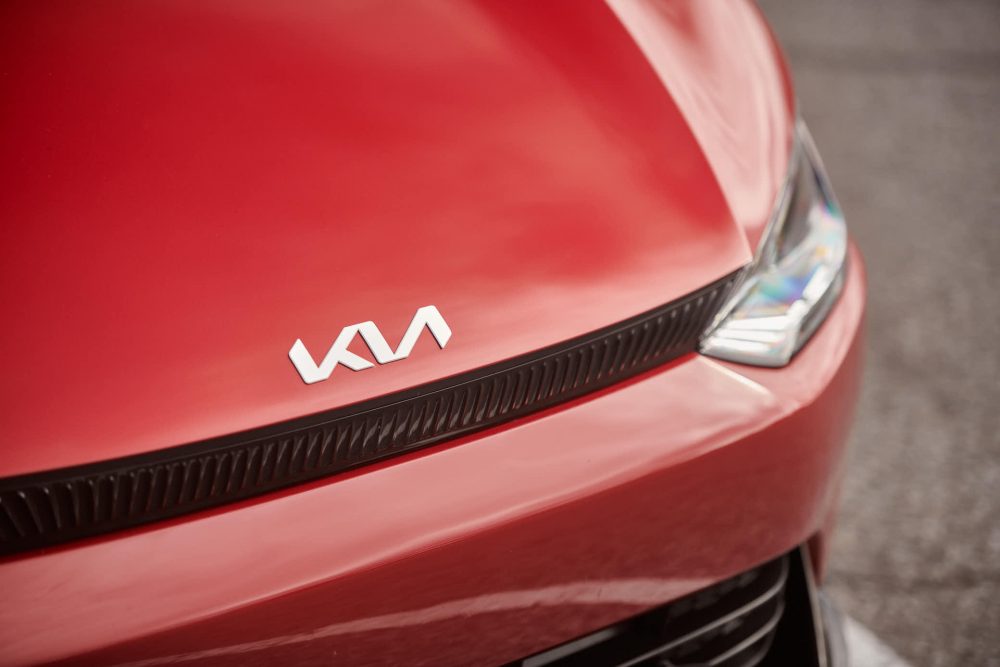 Just like all new electric cars currently on sale, the EV6 isn’t cheap and you’ll need to wait a long time before getting yours. But considering what you’re getting for the price, it’s actually quite decent. The beauty behind its pricing strategy is the amount of available configurations you can choose from. 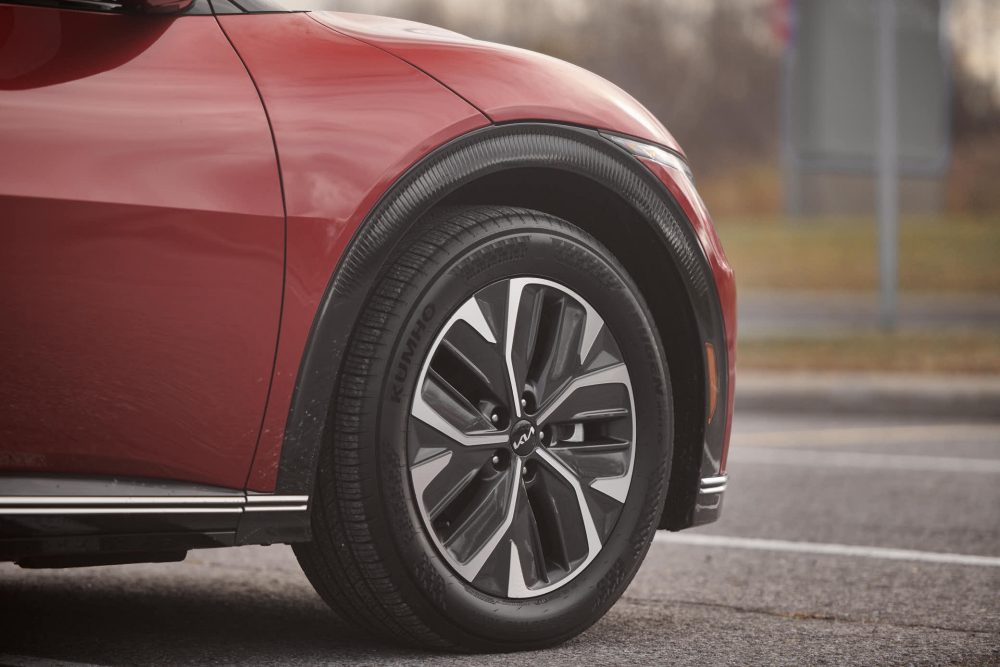 Up to six versions are available, with two different battery capacities and the option of rear or all-wheel drive. My tester was the AWD Long Range, powered by a 77.4-kWh usable battery. It powers two electric motors for a total combined output of 320 horsepower and 446 lb-ft of torque. Range is rated at 441 km for this one. It costs $59,509 including freight. That’s all before deducting various types of EV rebates.

Quick, Fun And Ahead 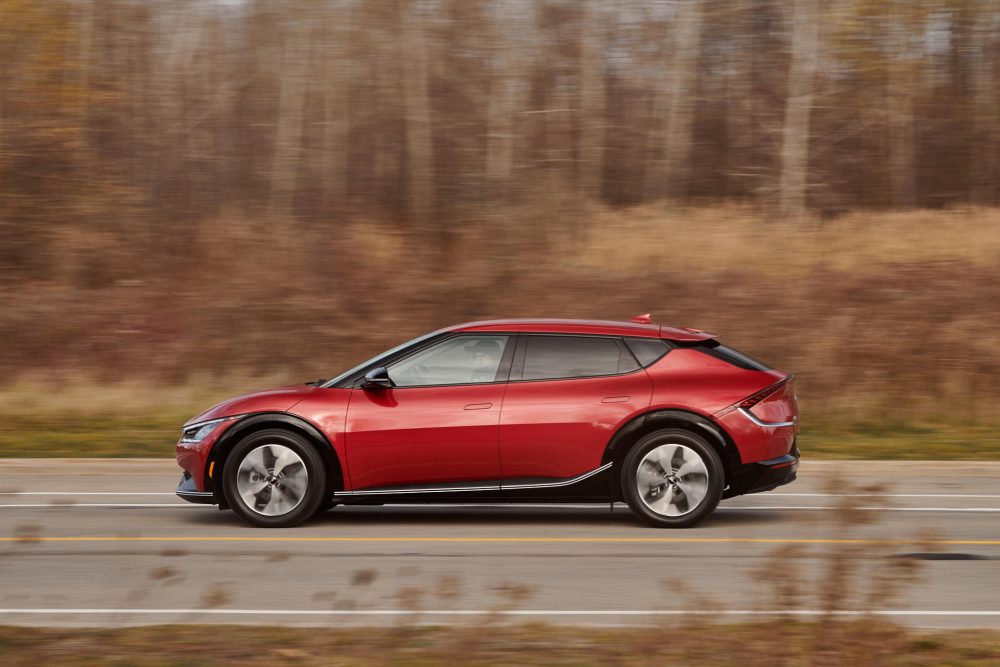 I know that the idea of a $60,000 Kia is a bit wrong, but trust me when I say this, this thing feels every bit like a car of this price bracket. I’ll even go as far as saying that it humiliates many gasoline-fed vehicles currently on sale. Oh, and while I’m on that topic: where’s the equivalent Japanese rival to this car? No Japanese carmaker, except for perhaps Nissan with the Ariya, even comes close to the efficiency, performance and flexibility of a Kia EV6. 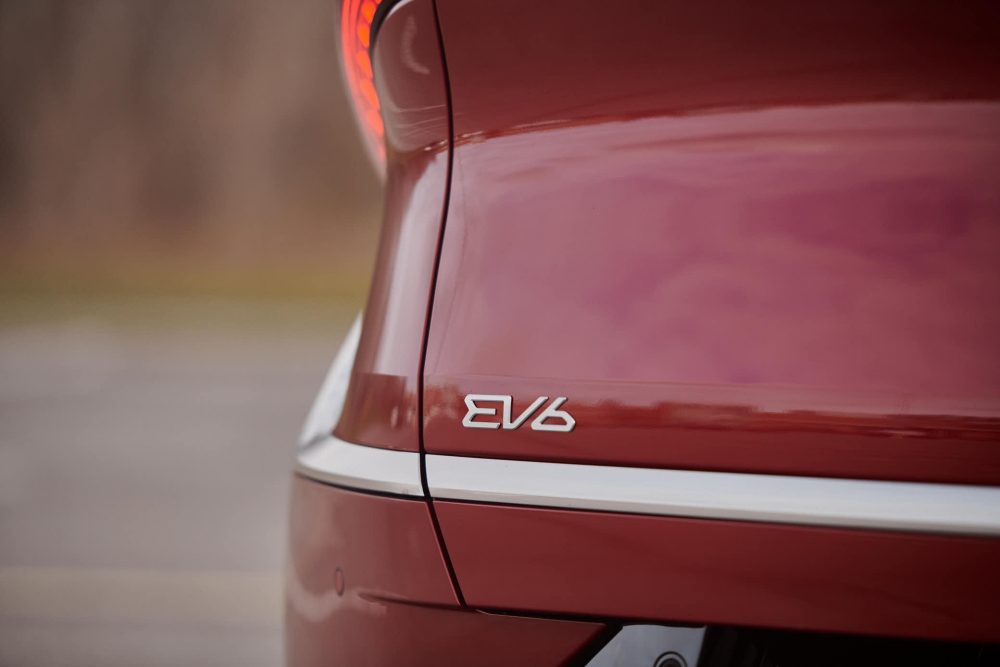 It’s actually more comparable to a Tesla in the sense that you get real-world driving range, fast charging speeds and more than ample performance. For instance, one of the Hyundai group’s key differentiator in the EV space, is its 800-volt electric infrastructure that allows the car to accept up to 350 kW of charging power. By comparison, a $150,000 Mercedes-Benz EQS tops out at 195 kW. As I said: humiliating. 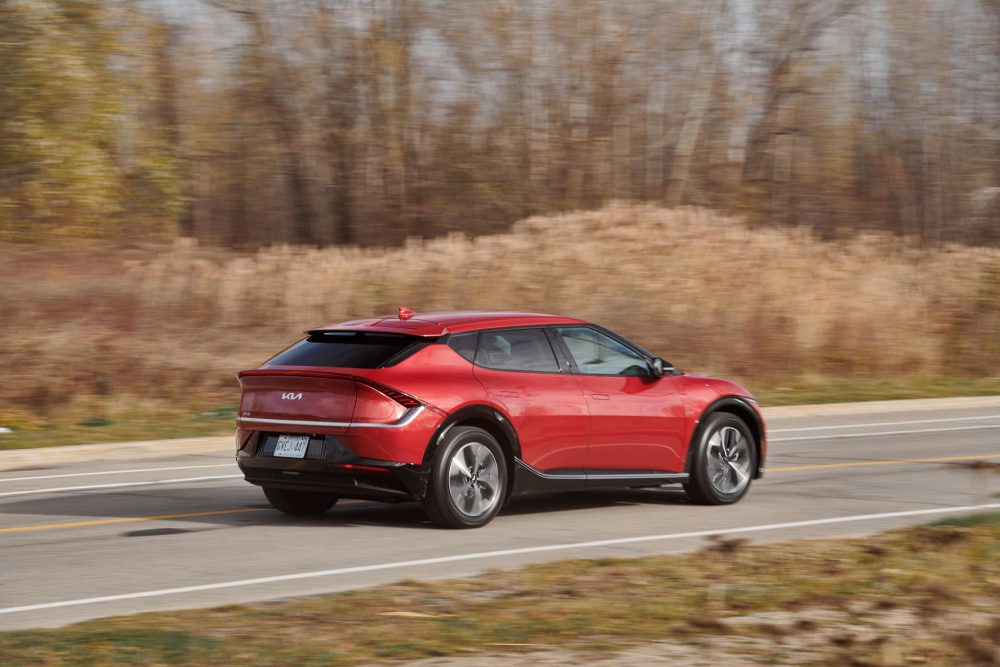 What I really love about the way this 2023 Kia EV6 performs is how smooth and highly efficient everything feels. Punch the accelerator pedal at any speed and, as expected in an EV, it bolts forward with absolutely no delays. It’s also respectfully quick, which makes stop-light take offs rather fun and exciting. 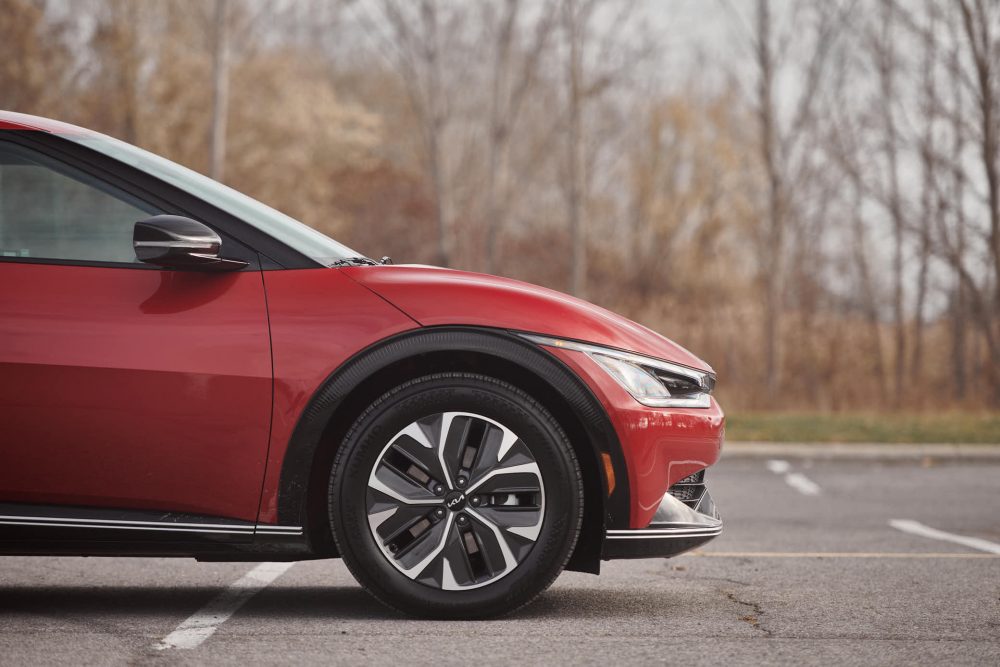 But the EV6 also has a brilliant chassis balance baked into it. Remove traction control and flog it hard into a corner, and you’ll feel that rear end doing stuff as you apply hard throttle on corner exit. It rewards good driving and that makes it feel that much more special. I also continue to believe that the South-Korean car brands are the ones that understand regenerative braking better than all carmakers, including Tesla.

This Kia gives you a slew of different recuperation modes, with three levels of regen that are selectable via the steering wheel-mounted paddles. You can also activate the i-Pedal from there, essentially Kia’s way of naming one pedal driving. One can then hold onto the left paddle shifter, like in a Chevrolet Bolt EV, to enhance the level of resistance manually. If none of this stuff excites you, it can all be turned off. 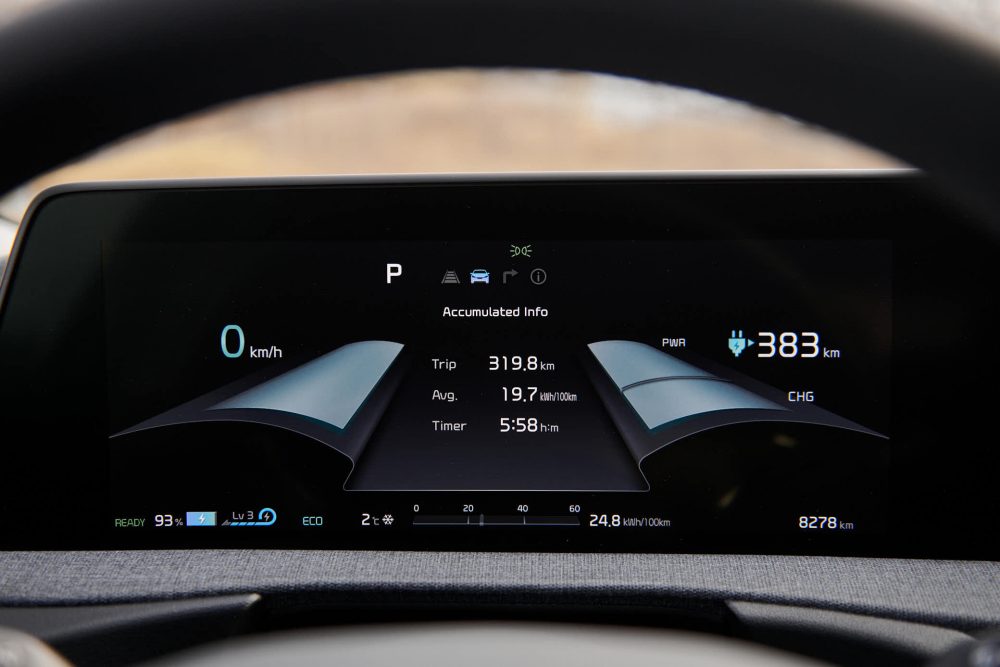 Perhaps the area where the EV6 is only fine, is in its energy consumption. During the week I had it, in early November at temperatures ranging between 5 and 10 degrees Celcius, I recorded a 19.7 kWh/100 average. That translates to a real-world range estimate of 392 km. While this isn’t too far away from Kia’s claims, it’s still considerably less efficient than a Tesla Model 3 or Y. 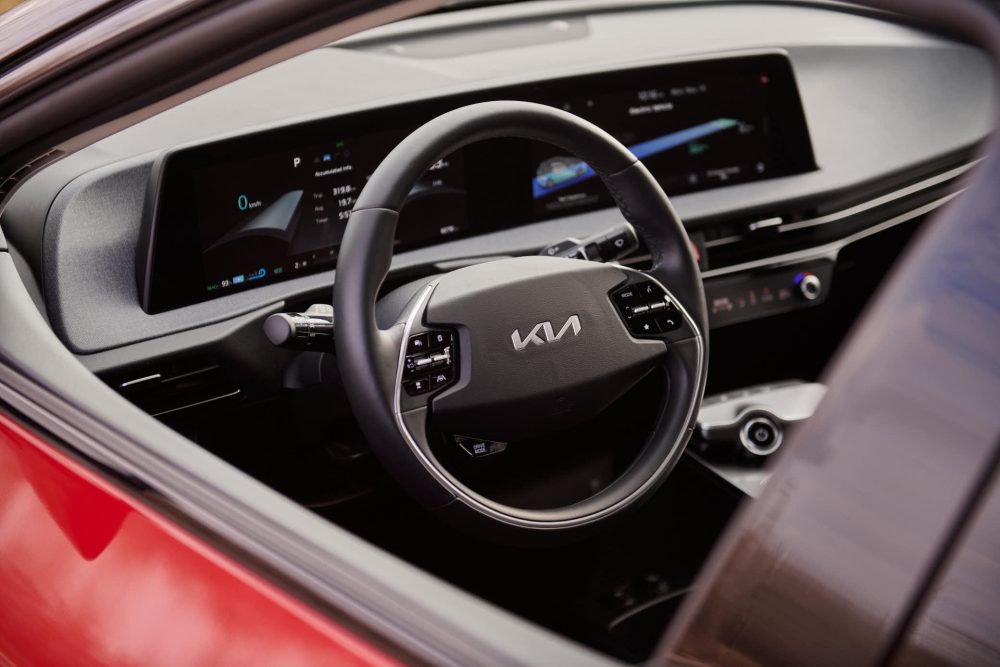 Inside, the EV6 is all tech and future. The seating position is weird in the sense that you sit high up in the cabin. It’s even more strange when you realize that the passenger seat is installed lower in the cabin. But the fully digital dashboard, which is essentially one large tablet, works seamlessly all while looking super cool. 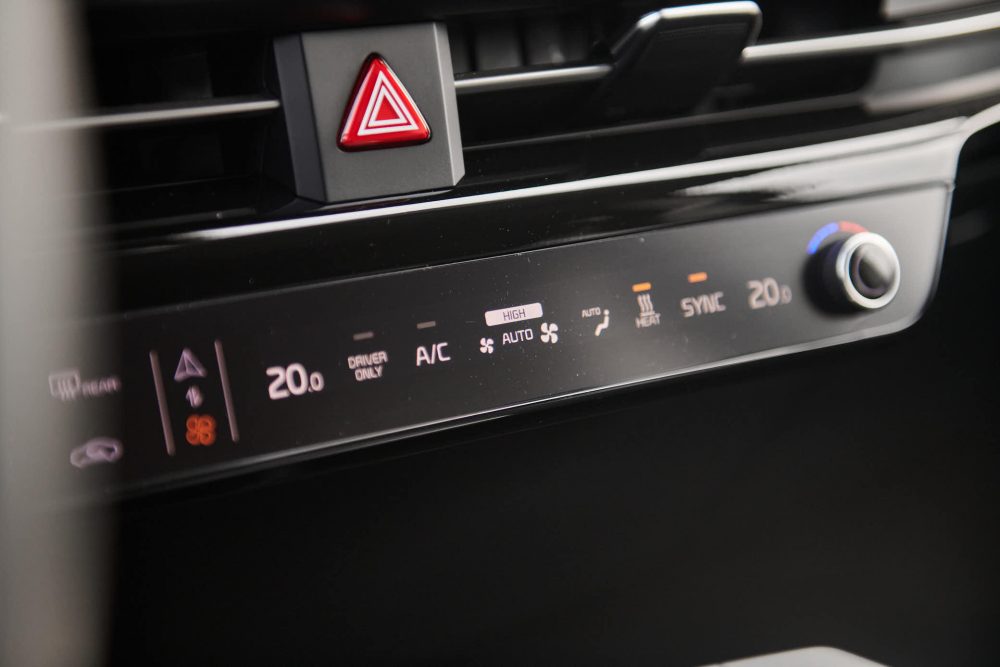 Kia tries to reinvent HVAC controls by installing only one digital panel. The user switches between audio and climate control functions by way of a tiny little button in the shape of an arrow. It’s a cneat gimmick that quickly becomes irritating, especially while driving. Good luck hitting that arrow with your fat middle-aged finger as you’re bouncing around on a beaten road. 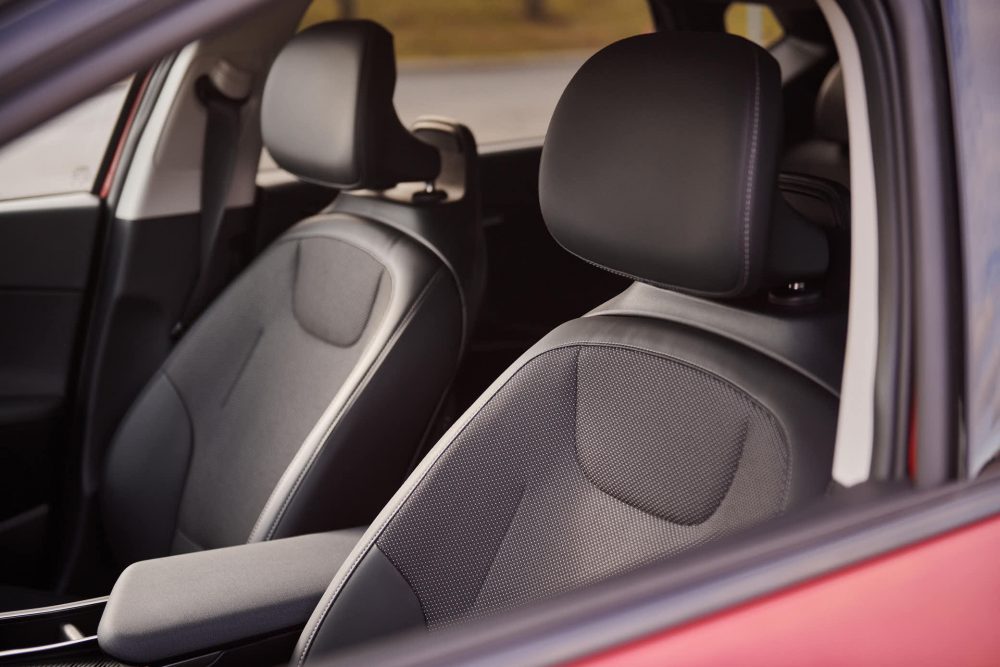 Out the rear, the EV6 is very spacious. A big human such as myself should have no issue sliding themselves back there as there’s ample head and leg clearance. Sadly, this vastness isn’t reproduced in cargo space. The EV6 is on the low side of the EV SUV spectrum with only 1,322 liters of total cargo. That’s significantly behind a Nissan Ariya (1,691 liters) and a Volkswagen ID.4 (1,817 litres). 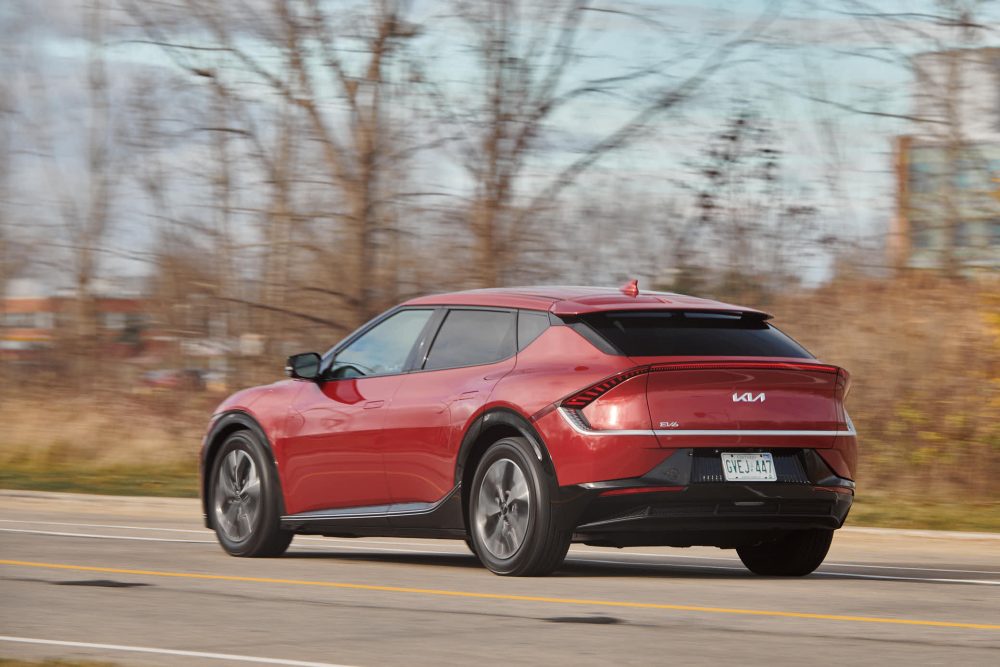 At the end of the day though, the car business is all about making a desirable product. And in this age of ultra-boring electric crossovers, Kia manages to come out with an exciting, appealing and highly capable electric utility vehicle. With Tesla now dominating the EV space due to vehicles that are more technologically advanced, it feels fantastic to see a mainstream company like Hyundai challenging Elon Musk at his own game.