2023 Kia Sportage HEV Represents The Middle Ground In This Segment 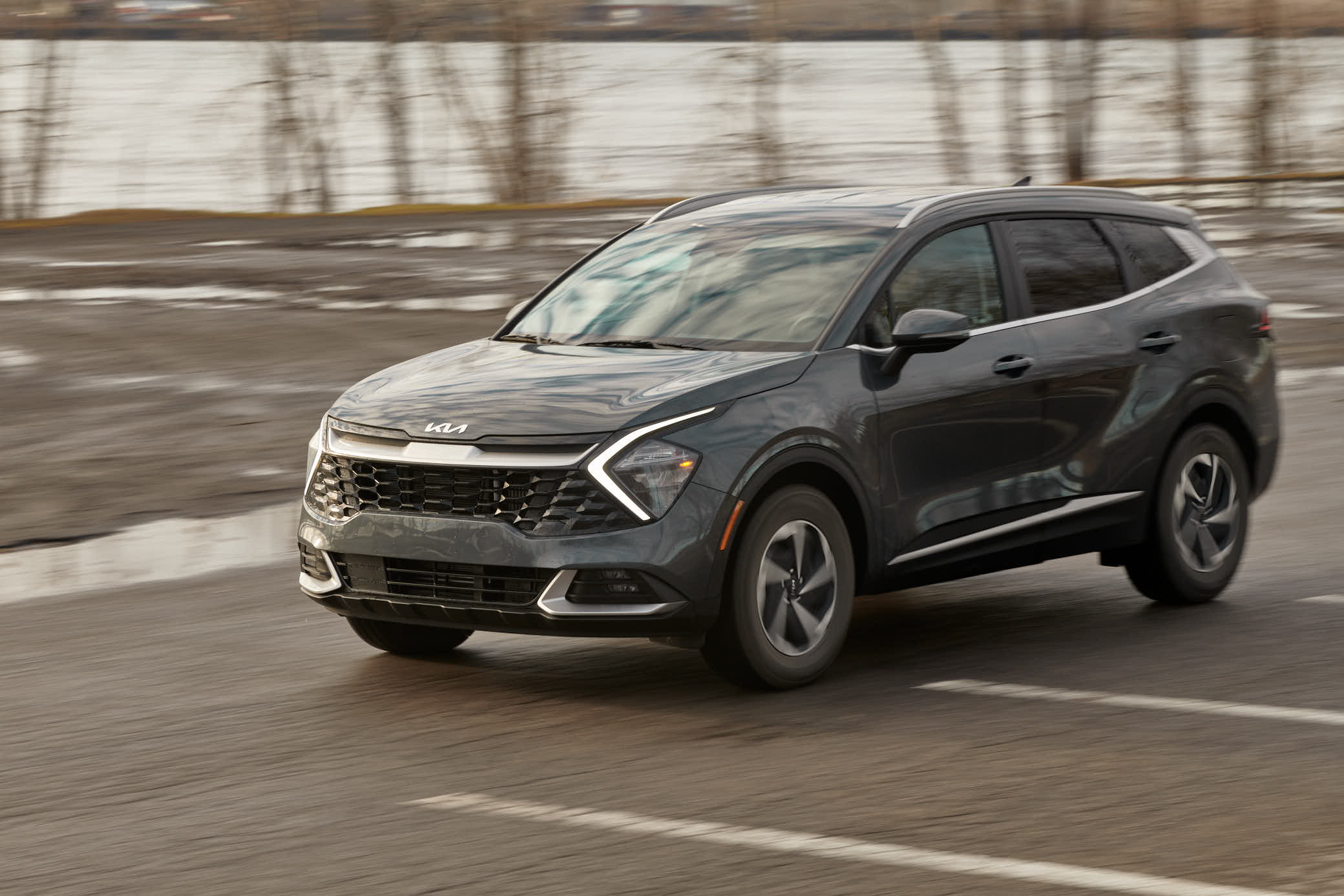 The 2023 Kia Sportage is the newest addition to the hybrid compact SUV segment. For some odd reason, carmakers don’t seem to embrace hybrid propulsion enough in this category, which is somewhat ironic considering that the people who buy these things are typically middle class families looking to reduce their gas bills. Up until this year, the segment really only included the Toyota RAV4 and the Ford Escape hybrid (Canada only got the Honda CR-V hybrid in 2023). But now, both Hyundai and Kia have hopped onto the bandwagon as well. Let’s see how this new electrified Sportage performs.

Definitely In Your Face 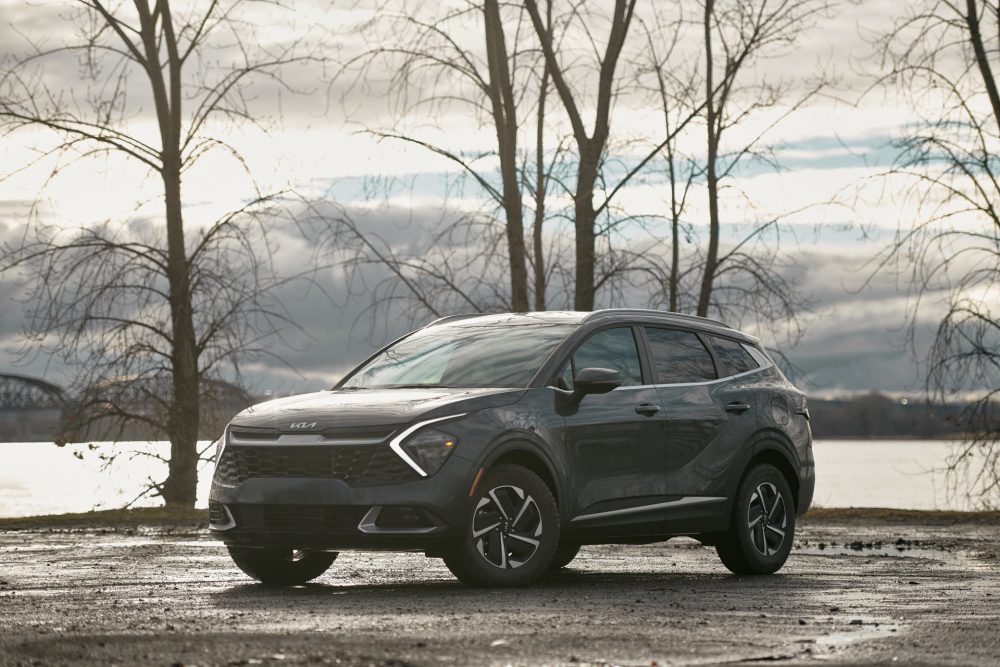 During the week I had the 2023 Kia Sportage hybrid, I received mixed opinions about the way it looks. Some adored its futuristic, transformer-like styling, while others absolutely hated it. I personally don’t like it, especially in this basic EX trim where its wheels are way too tiny for the size of its wheel wells. I mean, I guess I could underline the fact that it was designed by Karim Habib, a man I have profound respect for because, well, he’s from Montreal like myself, but also because he has designed some genuinely beautiful automobiles. 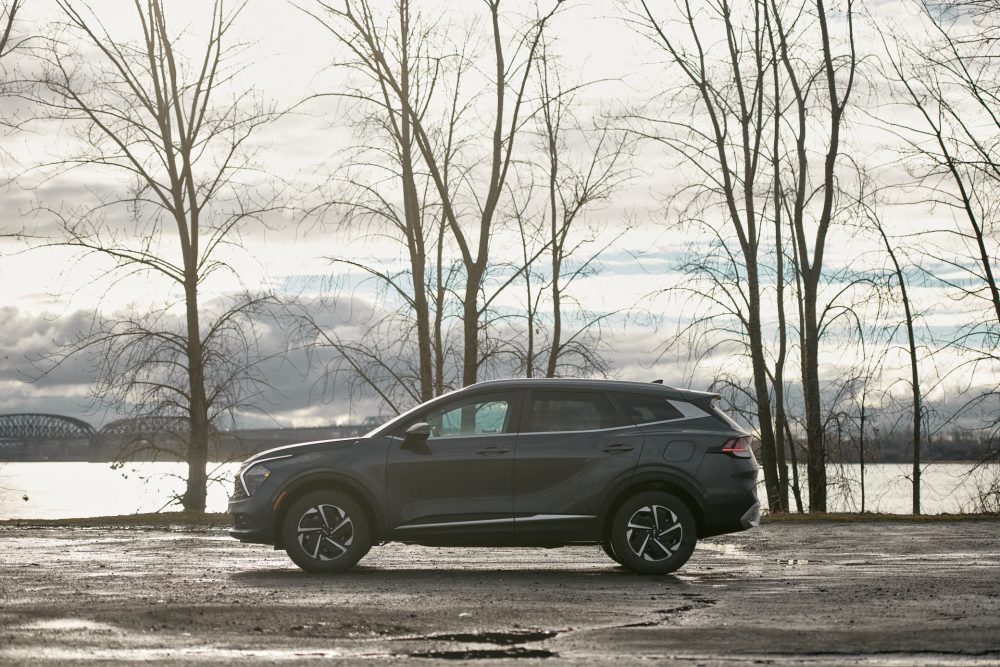 For the new Sportage, his “opposites united” design theme simply doesn’t seem as coherent as on the Kia EV6. However, one thing the Sportage has definitely done well since it was first introduced on our market in the late 1990s, is evolve. In a very short times lapse, this thing went from being a cheap alternative to a second-hand car, to a serious contender to segment juggernauts like the Toyota RAV4 and the Honda CR-V. 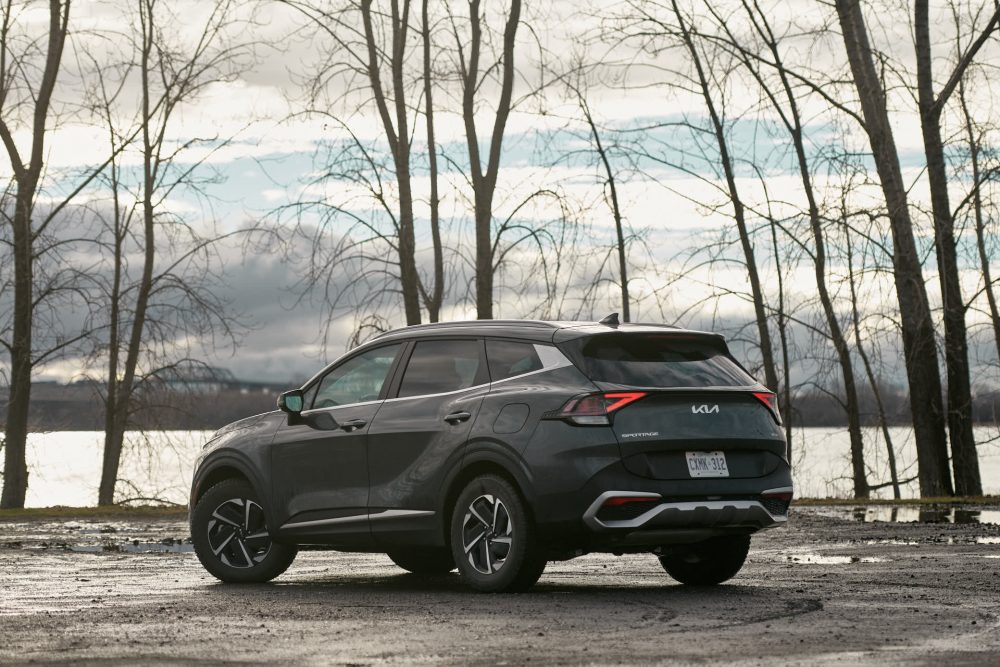 It’s also a lot bigger than before. For instance, its wheelbase grows a full 85 mm for a total length of 4,660 mm (instead of 4,480 mm). It’s also wider and taller, making it appear almost as if it was a midsize SUV. 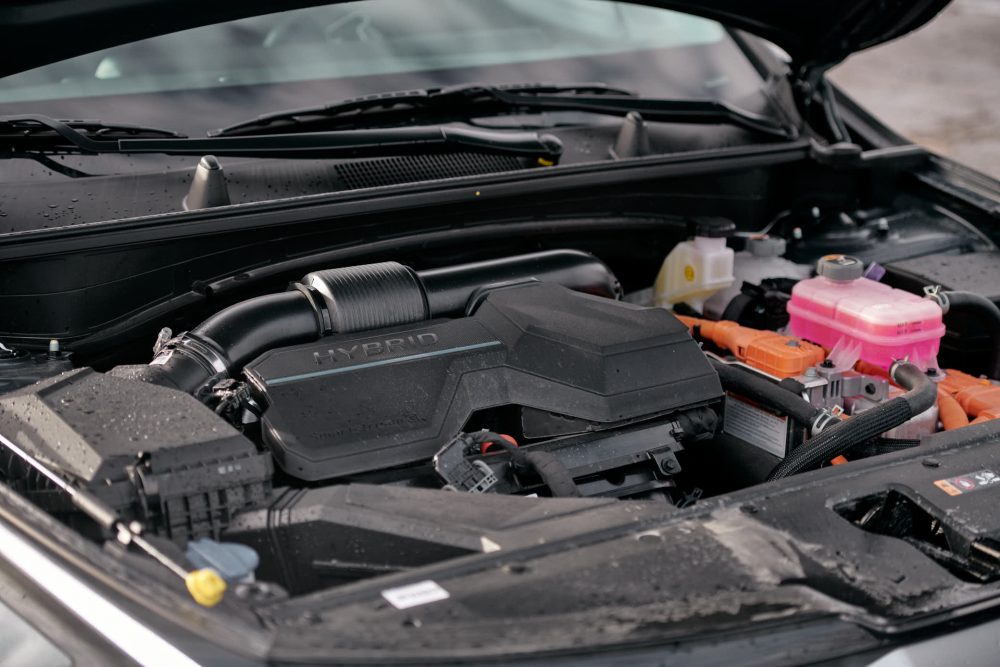 The Sportage now comes in three flavors: gasoline-powered, hybrid (HEV), as tested, and plug-in hybrid (PHEV). In this case, it’s powered by a turbocharged 1.6-liter four-cylinder engine that’s mated to a single 44,2 kWh (60 hp) electric motor installed in the front. It’s then all mated to a six-speed automatic transmission. All in all, this drivetrain is good for 227 combined horsepower and 258 lb-ft of torque. However, unlike a Toyota RAV4 hybrid that relies on a second, rear-mounted electric motor to achieve all-wheel drive, the Kia Sportage HEV goes about it utilizing a good old mechanical driveshaft. 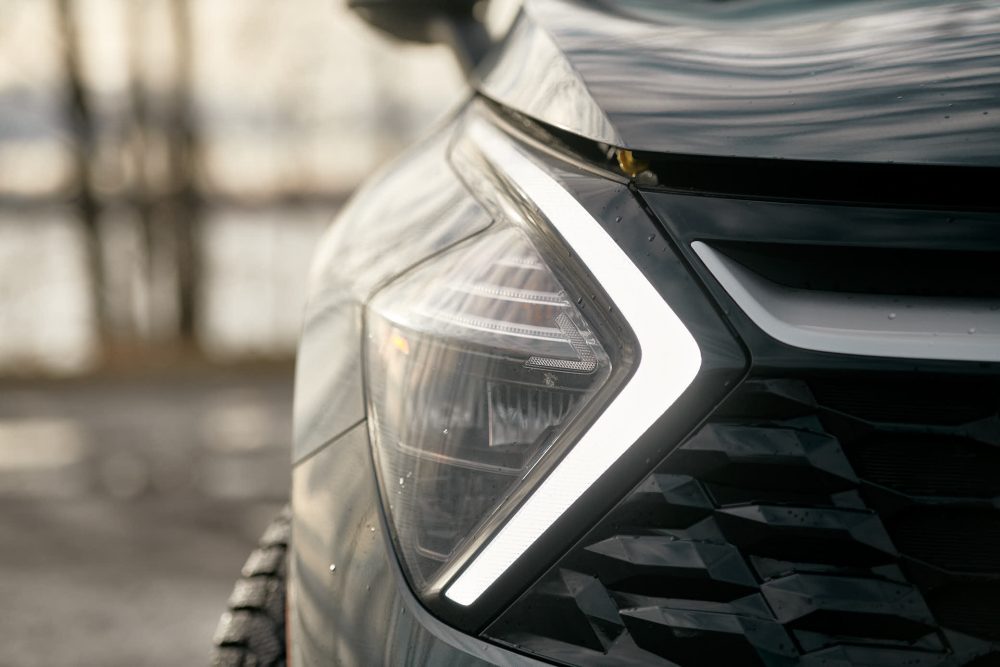 As for pricing, the model I was driving had a window sticker of $38,510, which is a tad more expensive than the $37,794 Toyota RAV4 hybrid, but still considerably more affordable than the ridiculously priced Honda CR-V hybrid ($51,000).

Smooth Transitions Between Gasoline And Electric 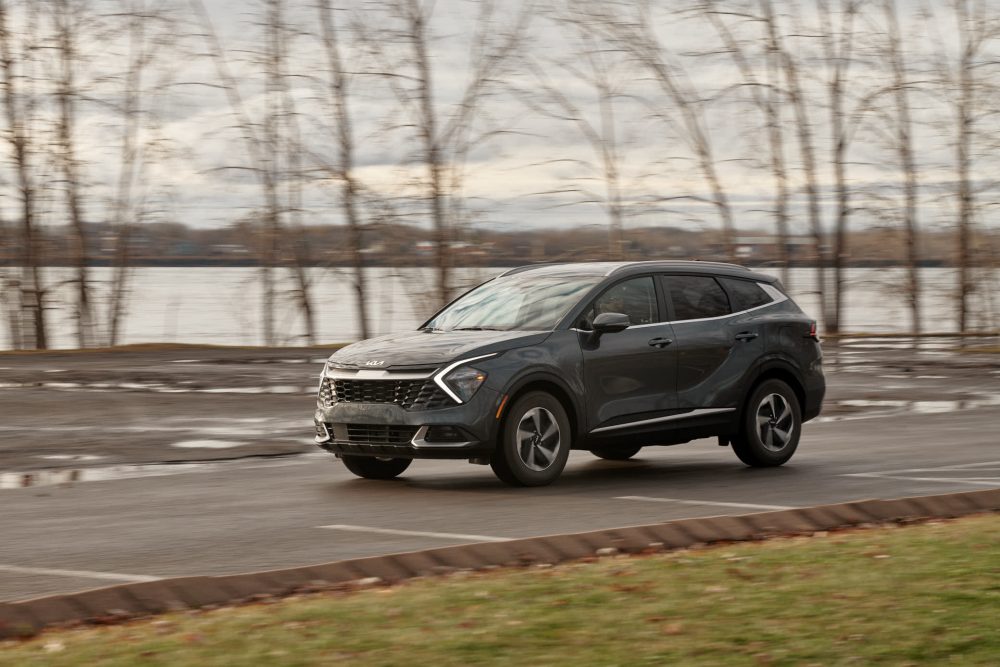 Since the 2023 Kia Sportage hybrid relies on traditional mechanical components – driveshaft and automatic transmission – the transitions between gasoline and electric propulsion are rather seamless. I’ll also say that I’m really happy that Kia didn’t shove a stupid CVT in there. It feels good to feel a hybrid vehicle actually shifting. 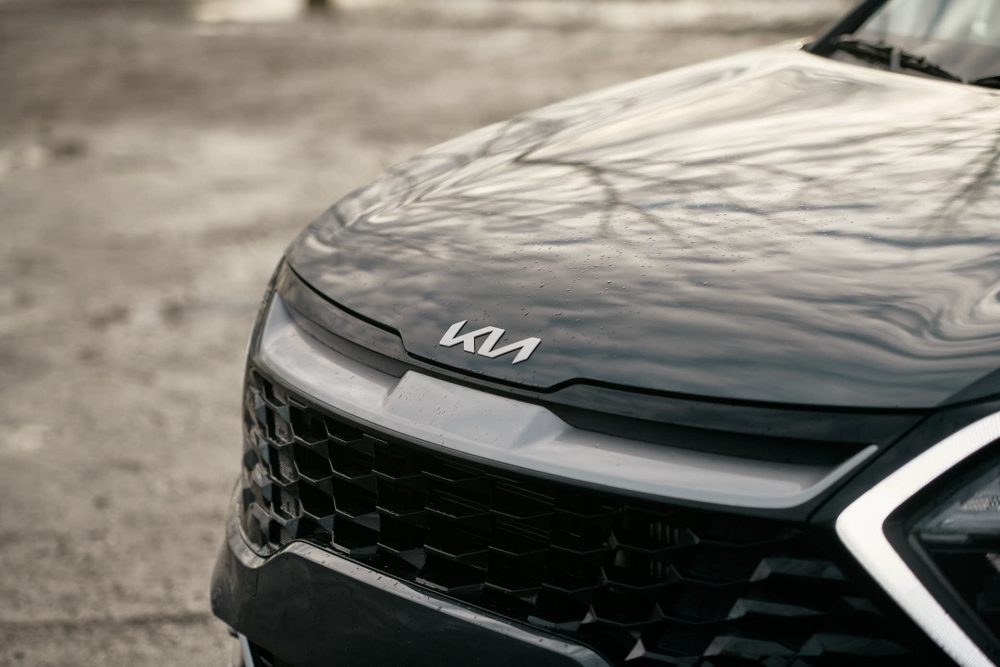 It’s also rather sad for both Ford and Honda who can’t seem to beat this Sportage’s fuel economy, even if they’re using a CVT. I averaged 7.8L/100 during a cool early December week where temperatures ranged between 0 and 8 degrees Celsius. In these conditions, a CR-V hybrid could barely get under 8.6L/100 km. 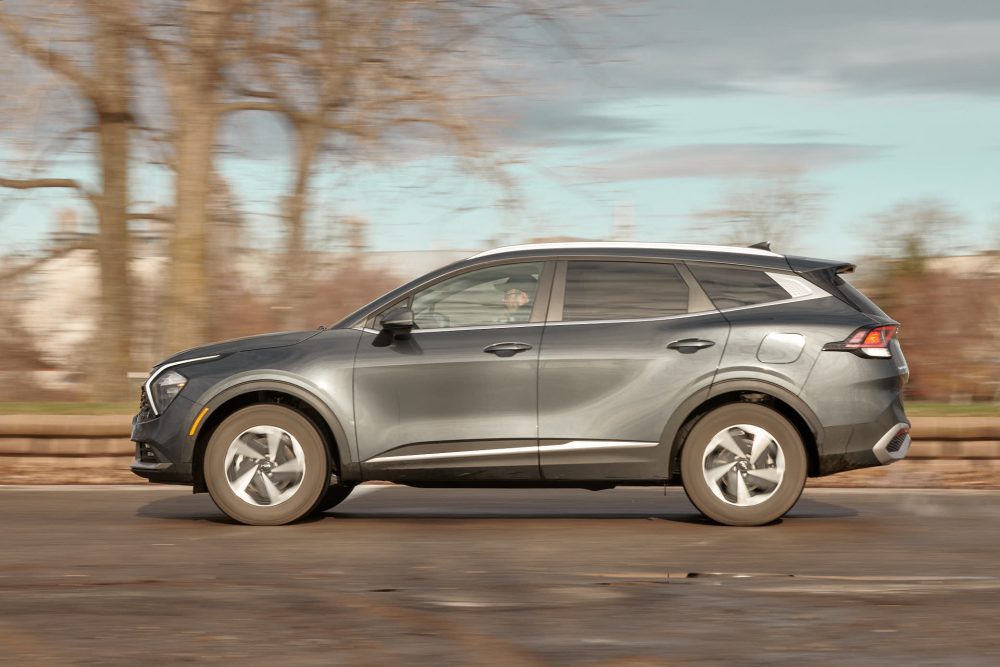 The Sportage is smooth, refined and all grown up compared to its predecessor which was a tad too juvenile around the edges. Yes, I know, that’s also what made the old Sportage sorta fun, but in this segment, rationality is key. These are the SUVs that young families buy. They’re cash cows for carmakers, meaning they need to be fuel efficient, decently priced, very spacious and comfortable, all while being loaded with standard features. And, honestly, in that regard, the new Sportage hits the nail right on the head. 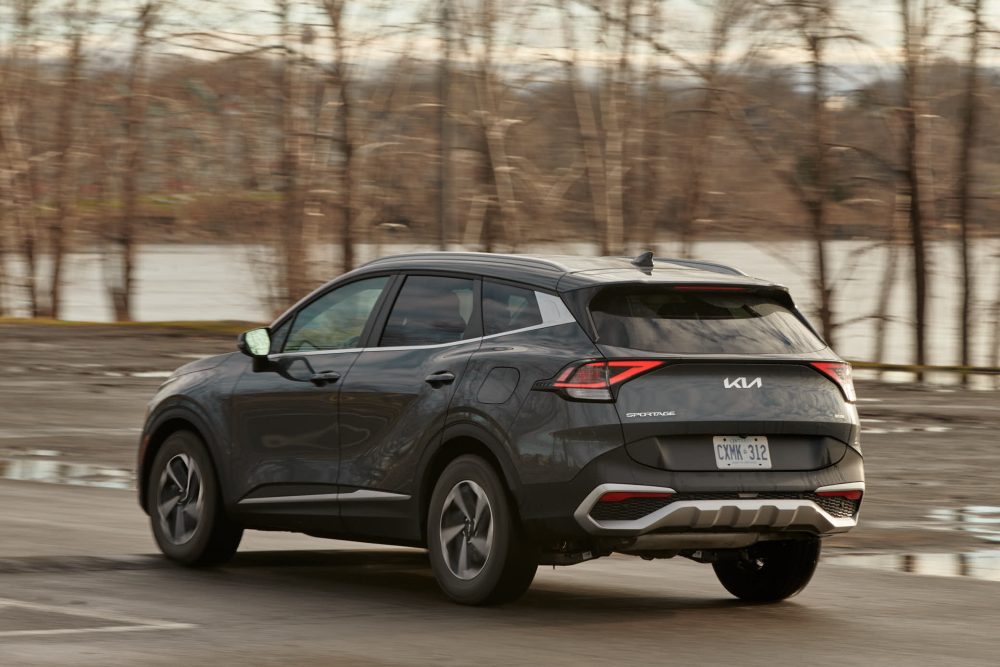 The power delivery from its punchy turbocharged engine is always more than ample, while the smoothness of the electric motor at takeoff simply adds to the vehicle’s overall level of sophistication. Don’t expect sporty performances from a car like this, but you might be impressed by how well it attacks a corner. I know I was. Considering it was riding on winter tires and how massive it is, it’s more than fine. 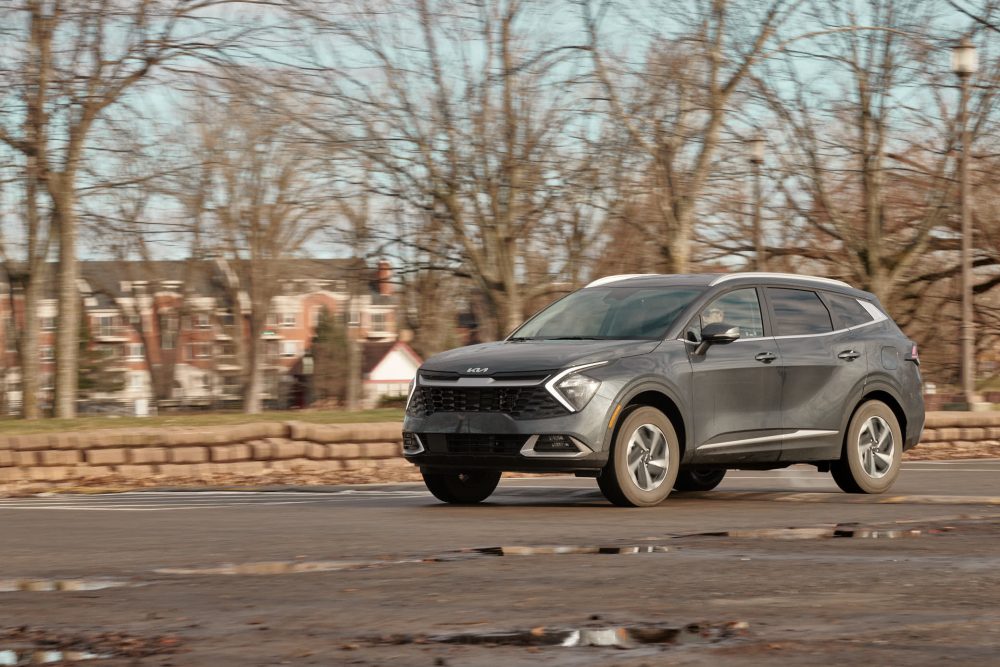 Punch the accelerator pedal in a Sportage hybrid and its transmission rapidly hands you over a lower gear. The combination of both gasoline and electric propulsion is almost perfectly synchronized, which leads to spirited acceleration and a desire to repeat the experience. Perhaps the only real letdown in the way it drives is how stiff its suspension is. That can become annoying fast in a vehicle that was designed to let your baby sleep while you drive. 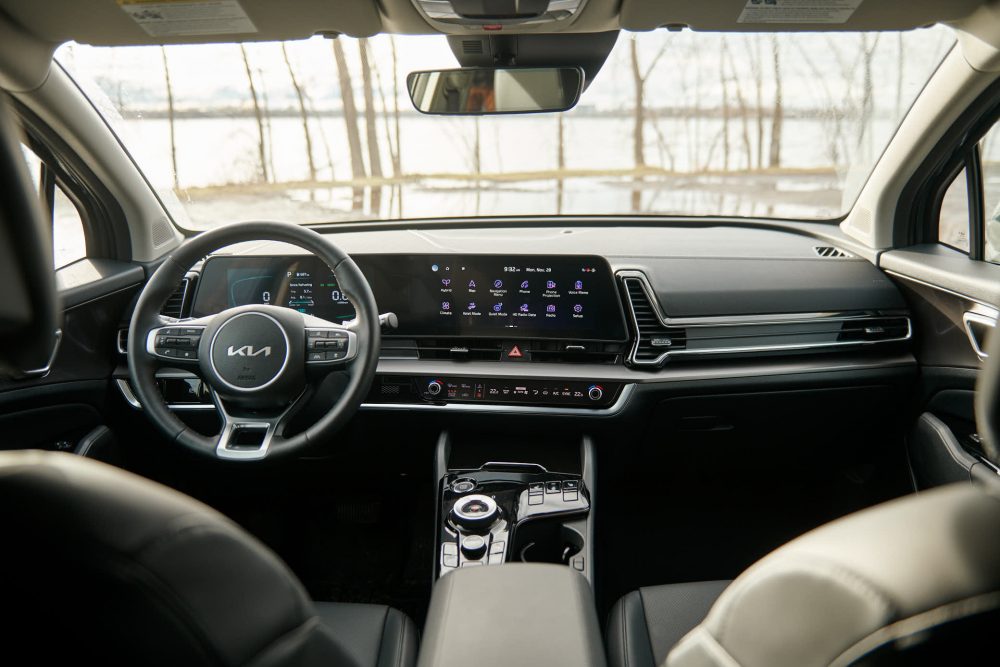 That all being said, it’s worth underlying the amount of equipment you’ll get even in the Sportage hybrid’s most basic EX trim. There’s a fully digital dashboard that includes both the infotainment system and the instrument cluster, you know, like in an expensive Mercedes-Benz. And while I do find Kia’s latest systems to be a tad too cluttered in information, there’s no denying how quickly it operates and how attractive the entire interface looks. 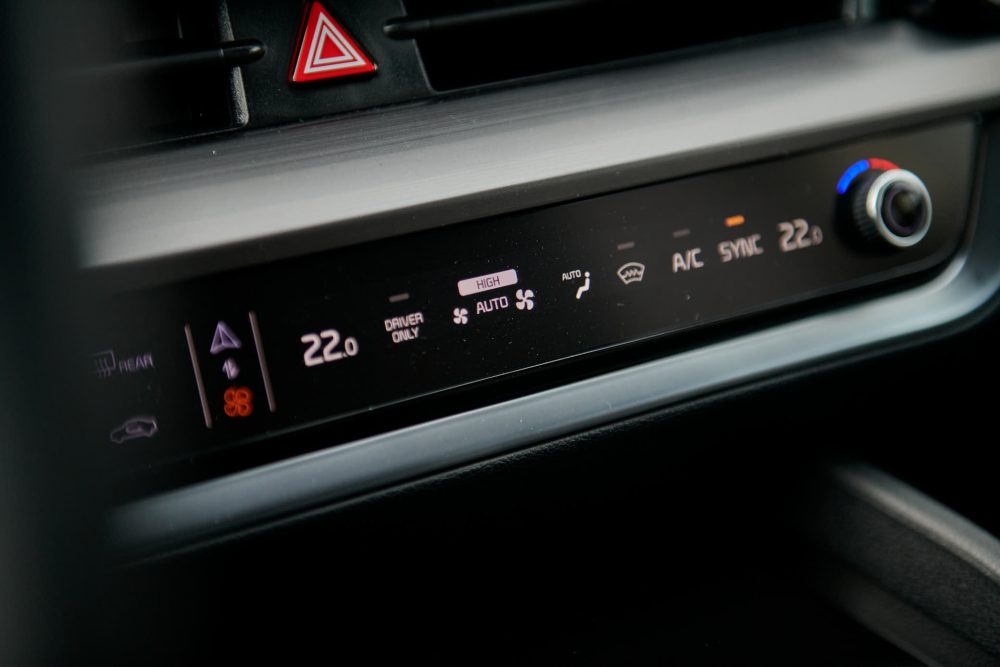 I do need to talk about that stupid HVAC panel though. Like in the EV6, it requires you to hit a tiny little arrow while driving if you want to access physical radio controls. How much do you want to bet that this shit will be wiped out during the car’s midcycle update? 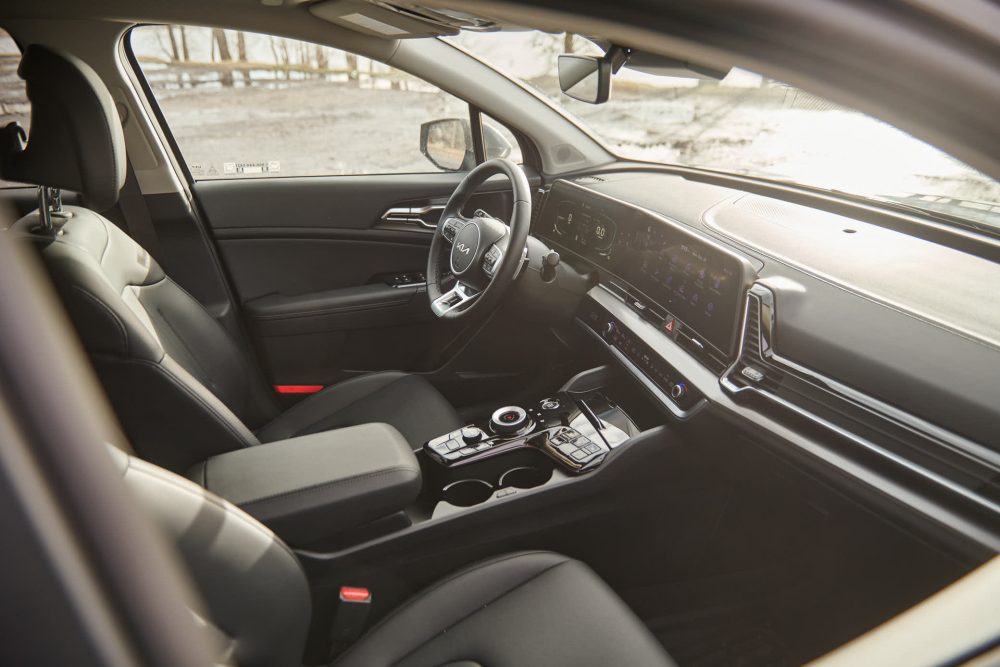 Inside, the Sportage is huge! Climb in the rear seating area and even if you’re tall, you’ll enjoy above average head and leg clearance. Perhaps what’s even more impressive is the amount of god-damn cargo space this thing yields when lowering the rear seatbacks. You’ll get 2,098 liters for doing so. I mean, how much cargo do you need? 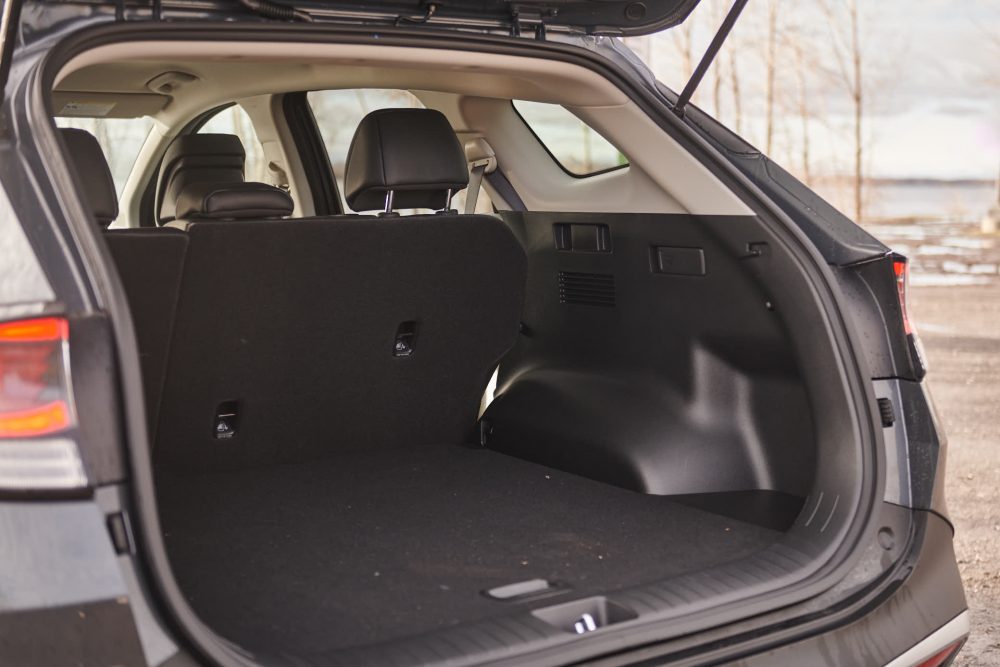 What you need to know though is that the Sportage HEV will haul more gear than a Toyota RAV4 hybrid and a Ford Escape hybrid. Only the almighty Honda CR-V hybrid (2,166 liters) will do better. 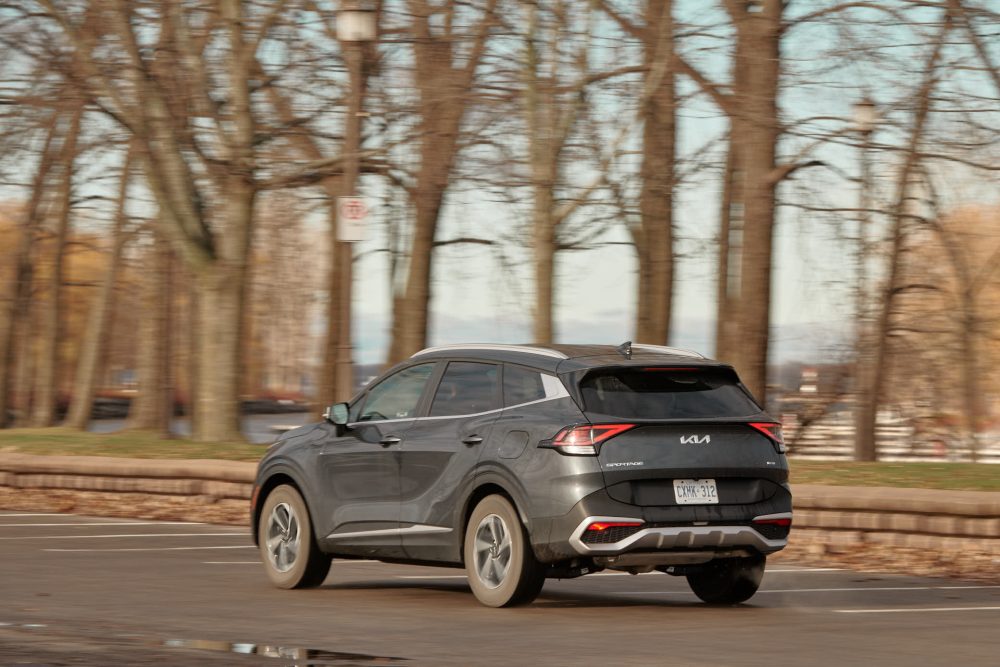 Here’s how I conclude my analysis of the 2023 Kia Sportage hybrid: its consumes more fuel than a Toyota RAV4 hybrid and costs a few thousand dollars more. It’s however much larger inside and considerably less expensive than a Honda CR-V hybrid. It’ll pull around the same fuel consumption as a Ford Escape hybrid, but comes with more standard technology and a funkier design. It’s therefore a great middle ground that I recommend you lease instead of buying due to its poor resale value. What you have here is an SUV that you and your family will enjoy without it costing you too much upon purchase, nor at the pump.