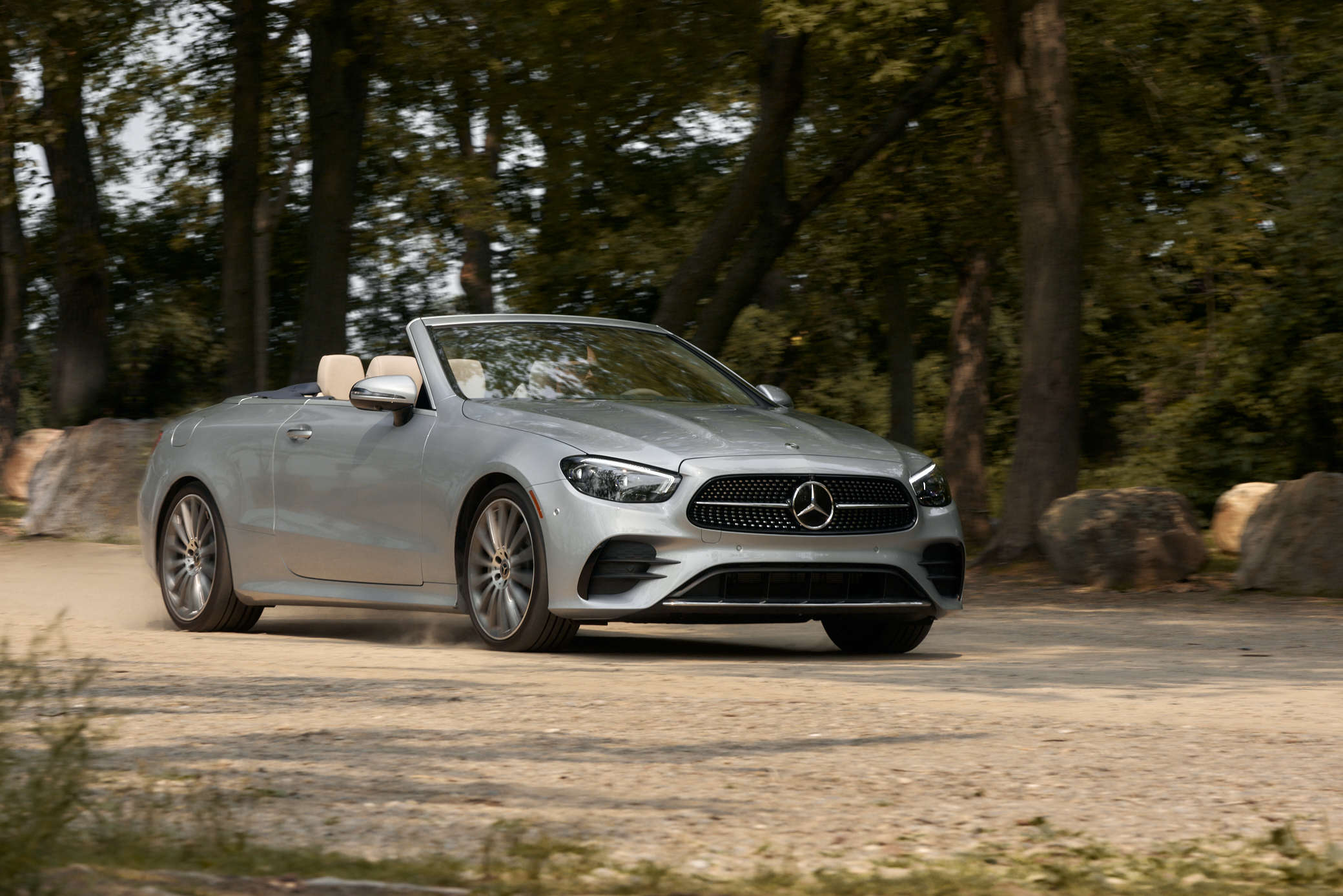 When I say “flexibility”, I’m not talking about how the 2021 Mercedes-Benz E450 Cabriolet flexes in corners. It doesn’t. What I mean is that it’s the most versatile model within Mercedes’ lineup. Think about it: you can get these things as a sedan, a coupe, a wagon, a convertible and even as a 600-plus horsepower fire-breathing monster. However, it really is in this droptop attire that the E Class flexes its best muscles. 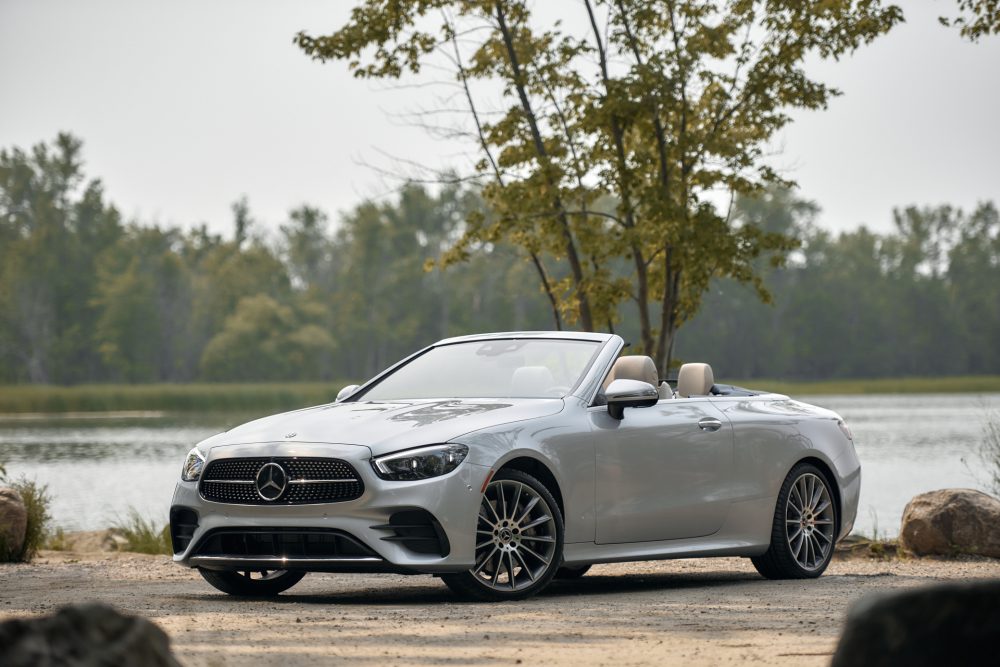 While Mercedes did say that it wants to simplify its lineup in the future, the sheer fact that all of its core classes – the C, the E and the S – can be had as a convertible is a testament to how deeply diversified it has become. Mercedes doesn’t built the E Class convertible to smash sales records. It builds it because it can, and more importantly, because some of its customers have eccentric tastes. The E Class cabriolet is the car Mercedes hides in the closet until a customer asks for something a little “different”. 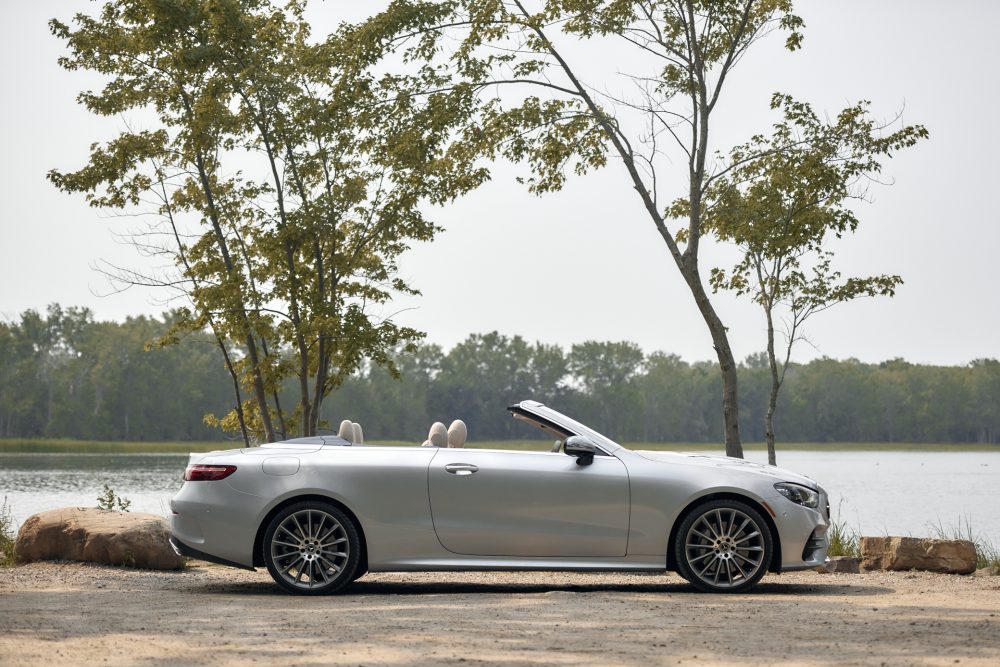 There’s a bit of an S Class vibe in the way the E Class has been packaged this year, all of which surrounding a mid-cycle refresh that brings a few new tricks to the party. The front and rear sections have been massaged to reflect Mercedes’ new corporate face. There’s a slightly updated interior, new color combinations, wheel packages, a redesigned steering wheel and, finally, the integration of Mercedes’ MBUX infotainment system which was originally released in the A Class subcompact. 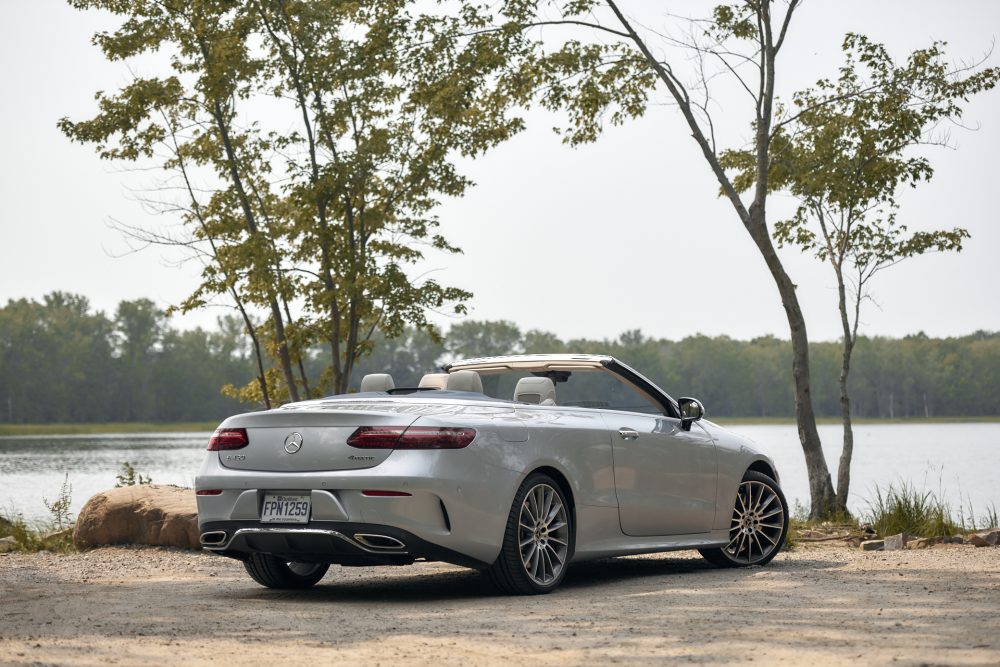 Things have also been updated underneath the hood. The 2021 Mercedes-Benz E450 ditches its old V6 engine in favor of a much more sophisticated turbocharged 3.0-liter inline six. It’s bolted onto a 48-volt mild hybrid system. Total output is rated at a respectfully adequate 362 horsepower and 369 lb-ft of torque. But no, this E Class cannot drive on pure electricity alone. The hybrid system acts as a generator to run the accessories, allowing the engine to consume less fuel. It’s all mated to a nine-speed automatic transmission and standard 4MATIC all-wheel drive. 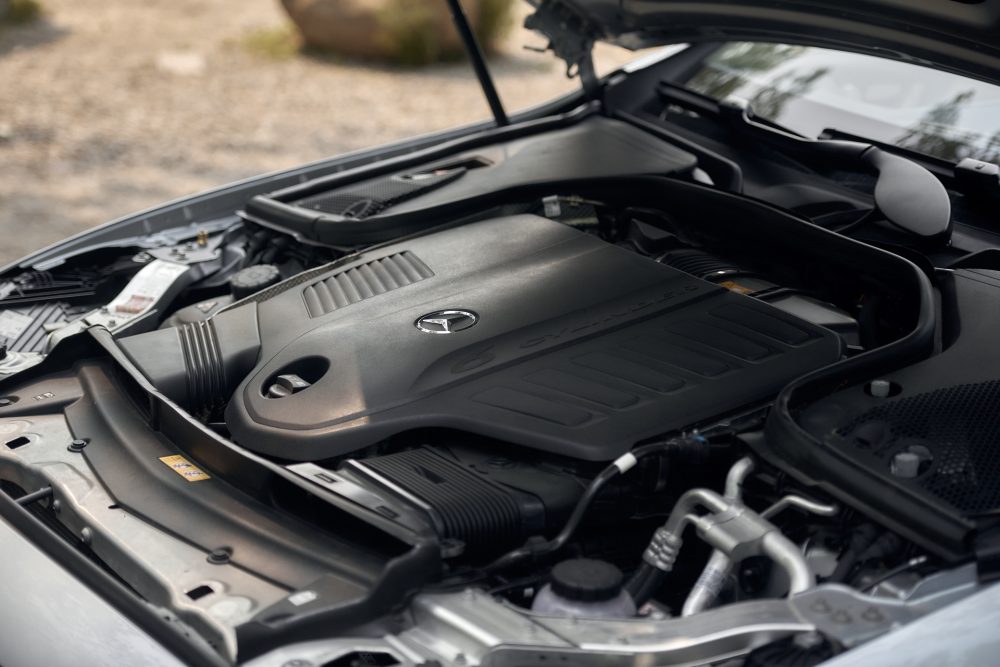 Pricing for an E-Class convertible kicks off at $88,900. My model was of course packed with optional packages, but not so much to make it ridiculous. Final sticker for the sexy drop top you’re seeing in these images was a “reasonable” $99,700. It is a Mercedes-Benz after all. 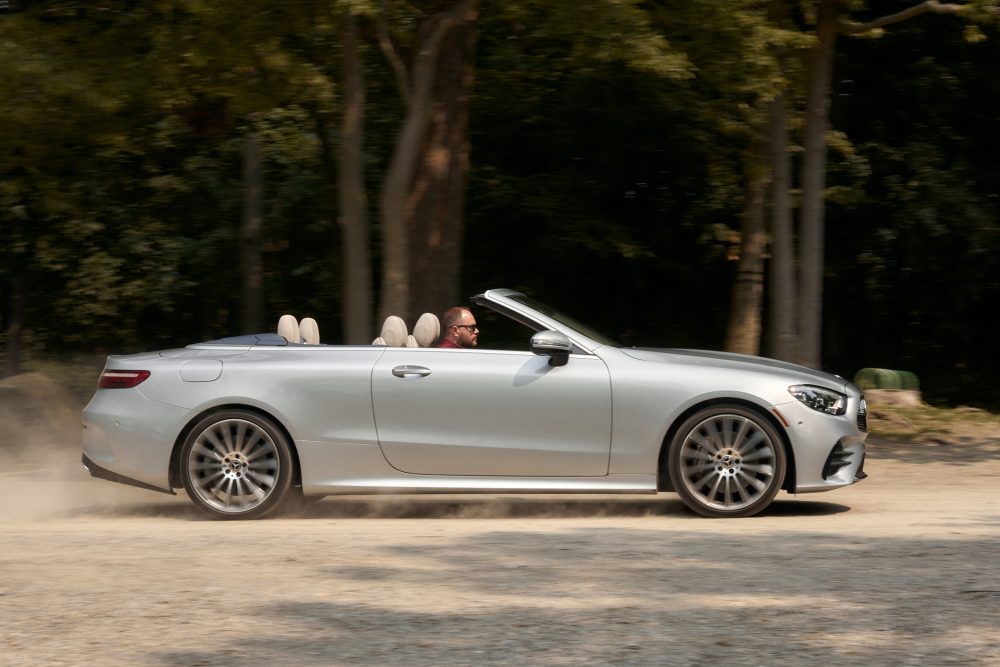 Driving around during a warm summer’s day in the 2021 Mercedes-Benz E450 had me thinking about the future of this model. It’s obvious that one, people don’t shop for these kinds of vehicles anymore, and that two, young money isn’t exactly seeking opulent drop top coupes. The new generation of rich buyers is mostly flocking towards SUVs, performance wagons, Teslas and surprisingly enough, Genesis? 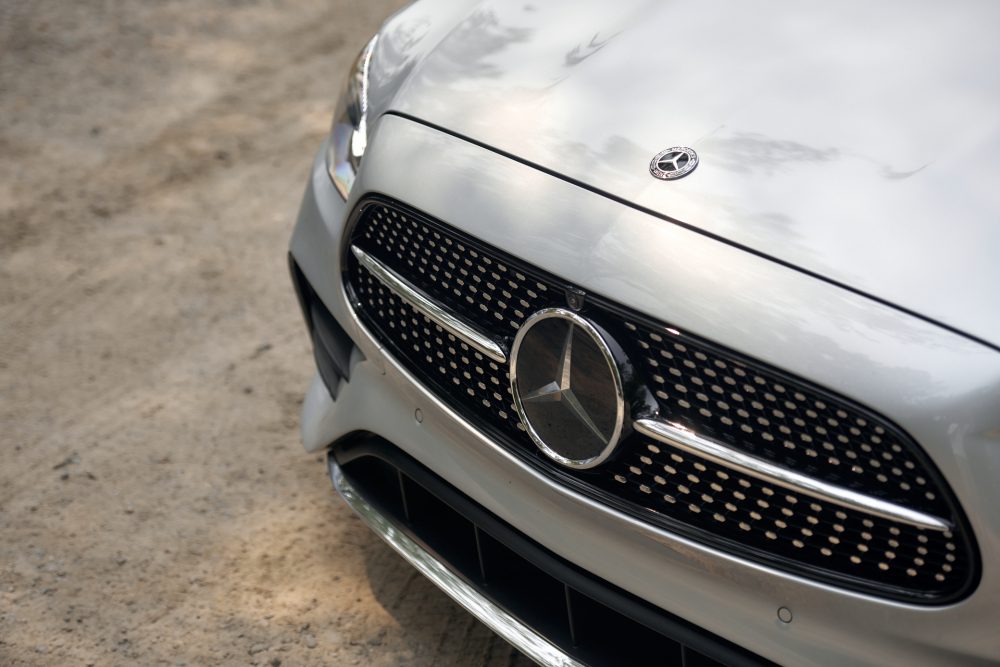 And with Kias now offered with standard with features like heated seats and state-of-the-art technology, it’s becoming ever more difficult to justify the purchase of an expensive Benz, no matter how good the car actually is. 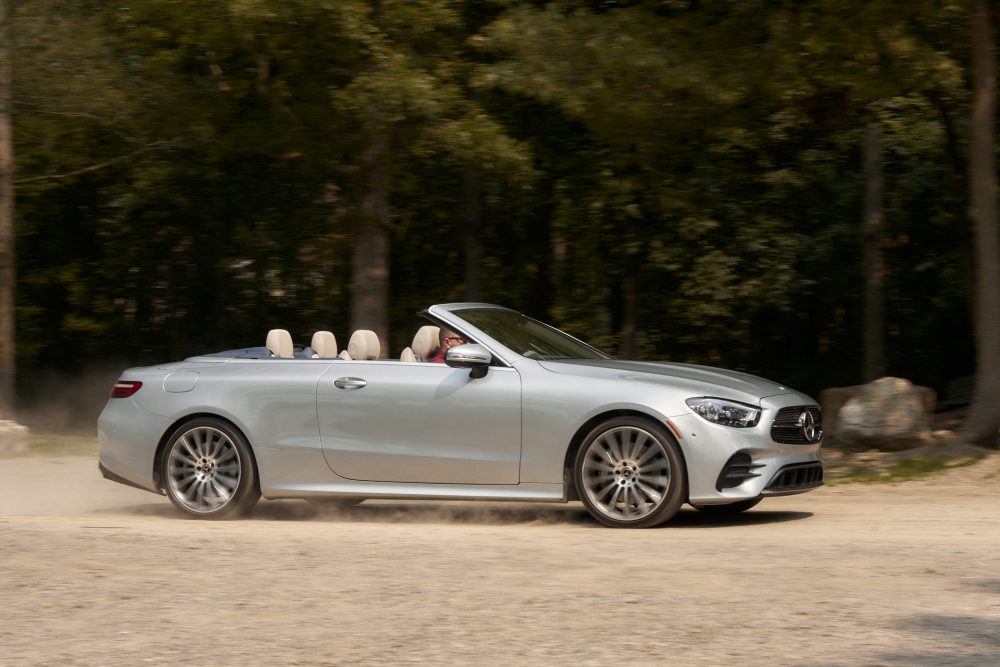 But although the E Class cab is losing steam in front of the new generation of car junkies, there’s no denying its near flawless execution. There’s a fascinating level of grace and balance in the way this machine takes on a corner that can only be achieved through the obsessive pursuit of perfection of luxury German carmakers. 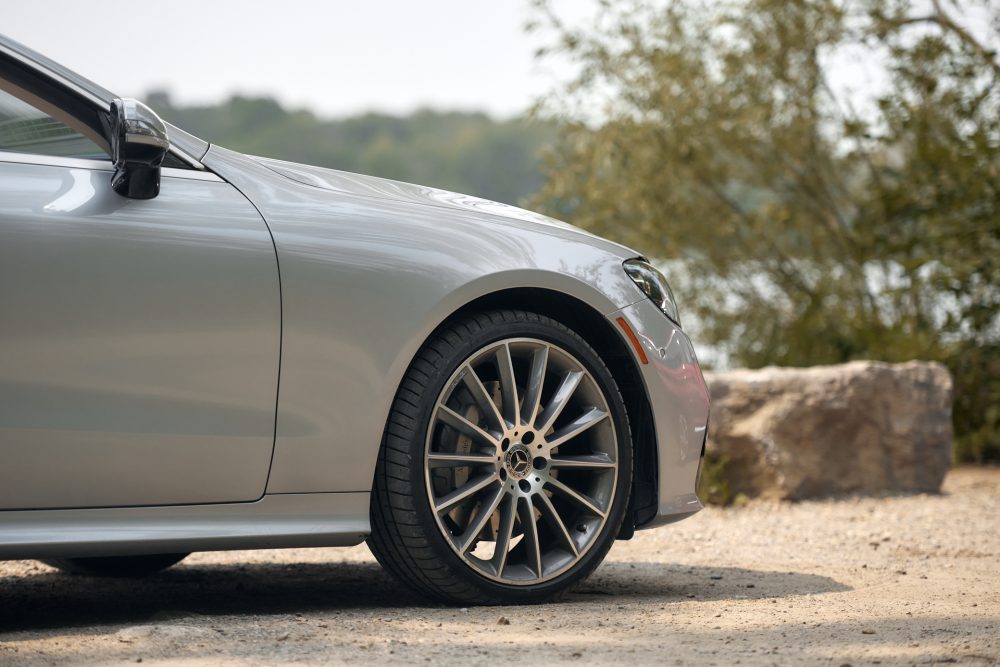 The E Class doesn’t accelerate, it propels you forward in utmost smoothness and refinement as the cabin remains properly ventilated and your neck remains warm from the clever seat-mounted neck warmers. This is a convertible for people who only want the good sides of driving without a roof. There’s no wind, no turbulence, and especially, no discomfort when driving a topless E Class. 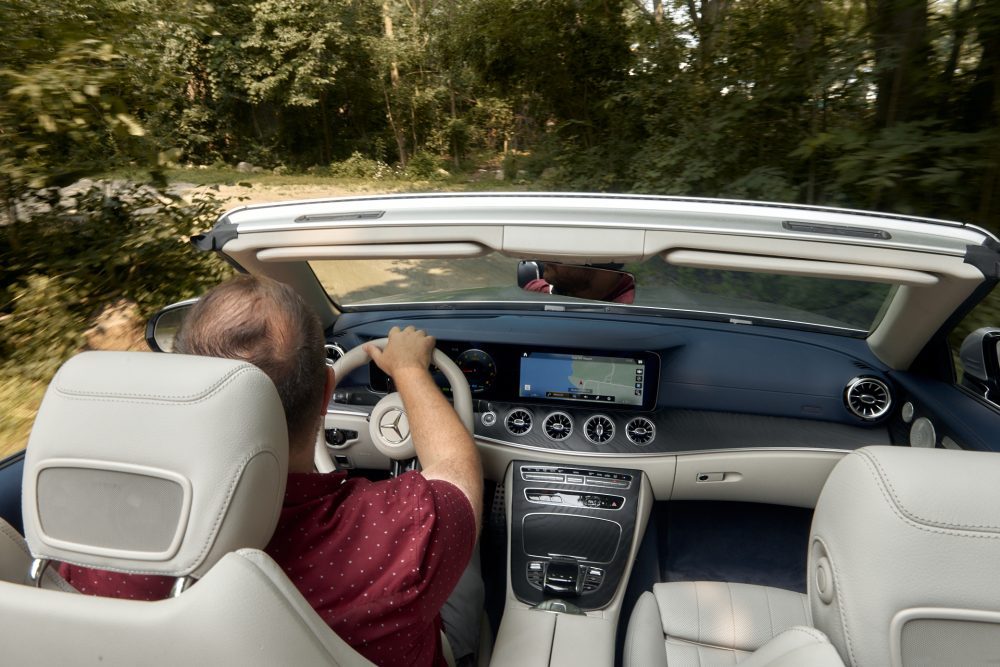 The inline six is smooth and provides more than enough forward thrust, but Mercedes’ biggest weakness remains its nine-speed transmission. Being a multi clutch setup means it hesitates at times and operates in weird ways at low speeds. It only performs well at full throttle which defeats the purpose of a luxury grand tourer. This transmissions is simply not as effective as the ZF unit BMW puts in the 5 Series. 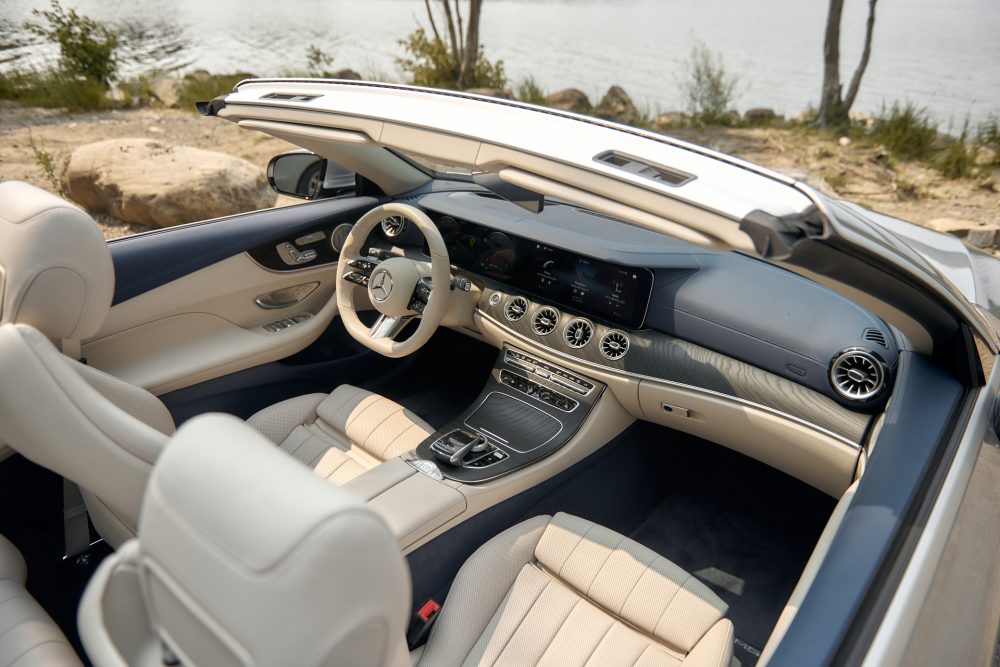 Obviously, where the E Class cab really impresses is in its massively comfortable and well put together cabin. I know, this sounds cliché, but Mercedes is still at the top of its game when it comes to seat comfort and overall ownership experience. The E Class is packed with technology, notably the MBUX infotainment system, which not only updates remotely to remain relevant in a constantly changing digital world, but will promptly execute precise commands through AI-guided voice recognition. 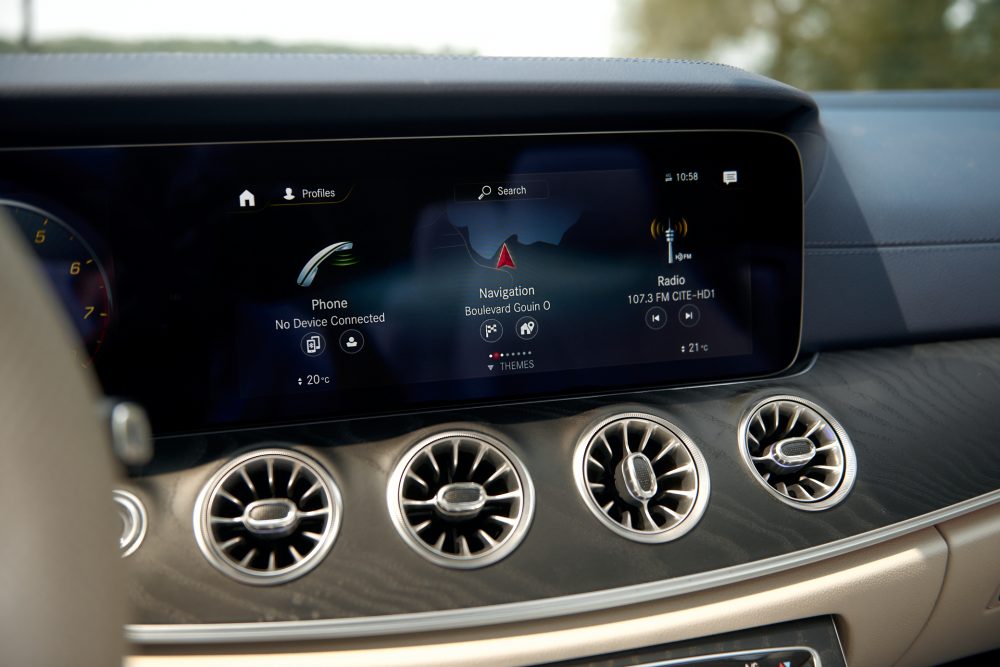 Let’s say you find the cabin a little too cool during an evening outing with your spouse. All you need to do is say “Hey, Mercedes, I’m cold”, and the car will raise the cabin temperature a few degrees. Still not enough? The system will even go as far as heating up the entire center console for improved comfort. Yes, the center console. 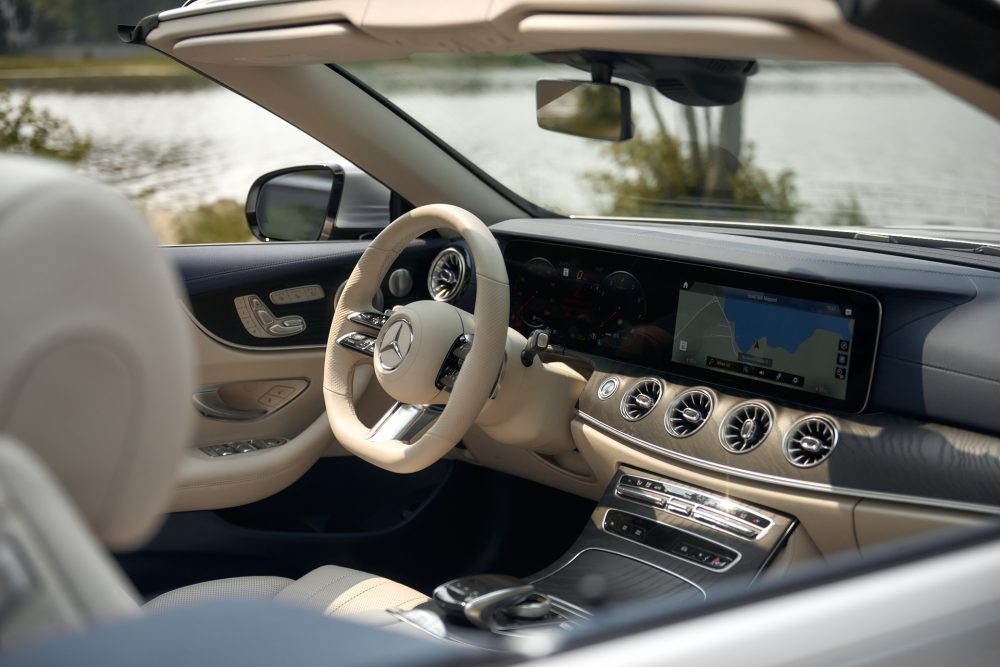 That all being said, MBUX is far from being a perfect system. Its voice recognition system won’t always understand your requests, and it’s particularly sensitive to wind noise, a phenomenon that’s hard to hide when half of the car’s top section is completely removed. Speaking of top section, while the E Class cab’s multi-sectional mechanical roof is a work of art in action, it’s not exactly compact, which means it sacrifices a large chunk of the already cramped trunk area once it’s stowed. 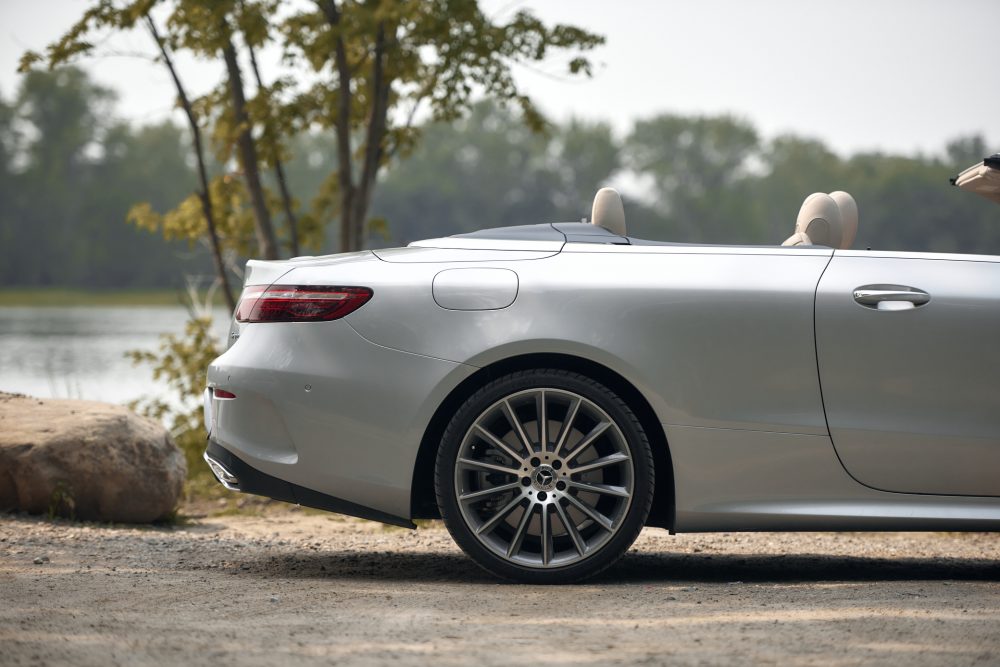 These minor caveats aside, the E Class Cabriolet’s tour the force lies in its ability to envelop its occupants in a staggeringly opulent experience that’ll have you question the larger S Class’ existence. That’s because the middle child within the three German luxury brands – the E Class, the 5 Series and the A6 – have always been silent overachievers. 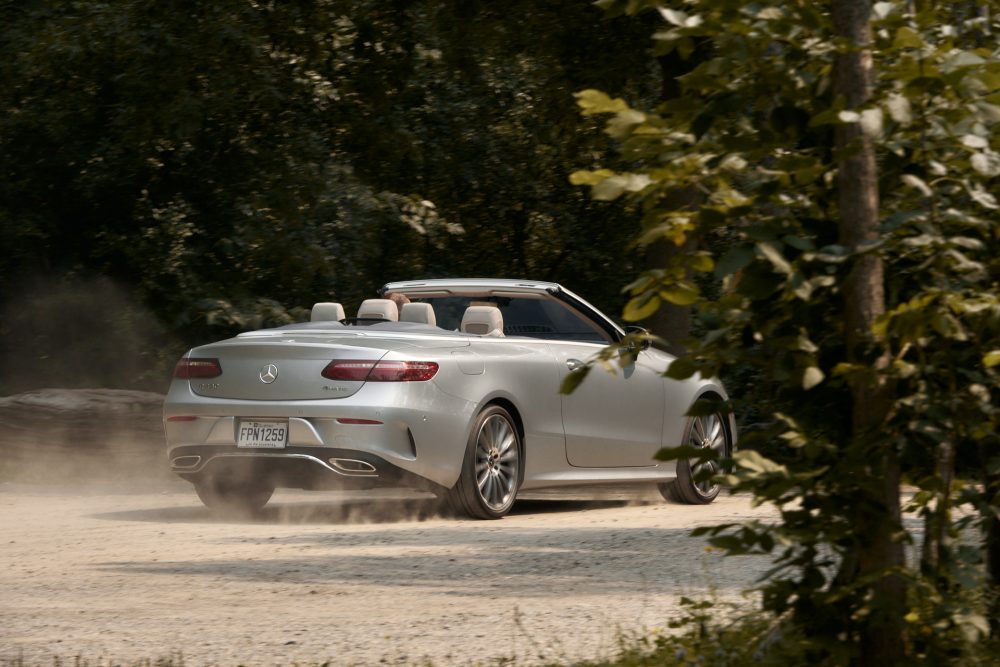 In other words, the 2021 Mercedes-Benz E450, along the other variations of the E Class, represents the sweet spot in Mercedes’ lineup. It’s the right size, the right speed, the right level of luxury and the right amount of opulence. What Mercedes needs to do at this point is find a way to rejuvenate the nameplate, because I fear the 35s and under aren’t aspiring to owning this leather-wrapped land yacht, even if it’s a fantastic machine to ride in. Now what if it was electric? Would the youngsters care more?