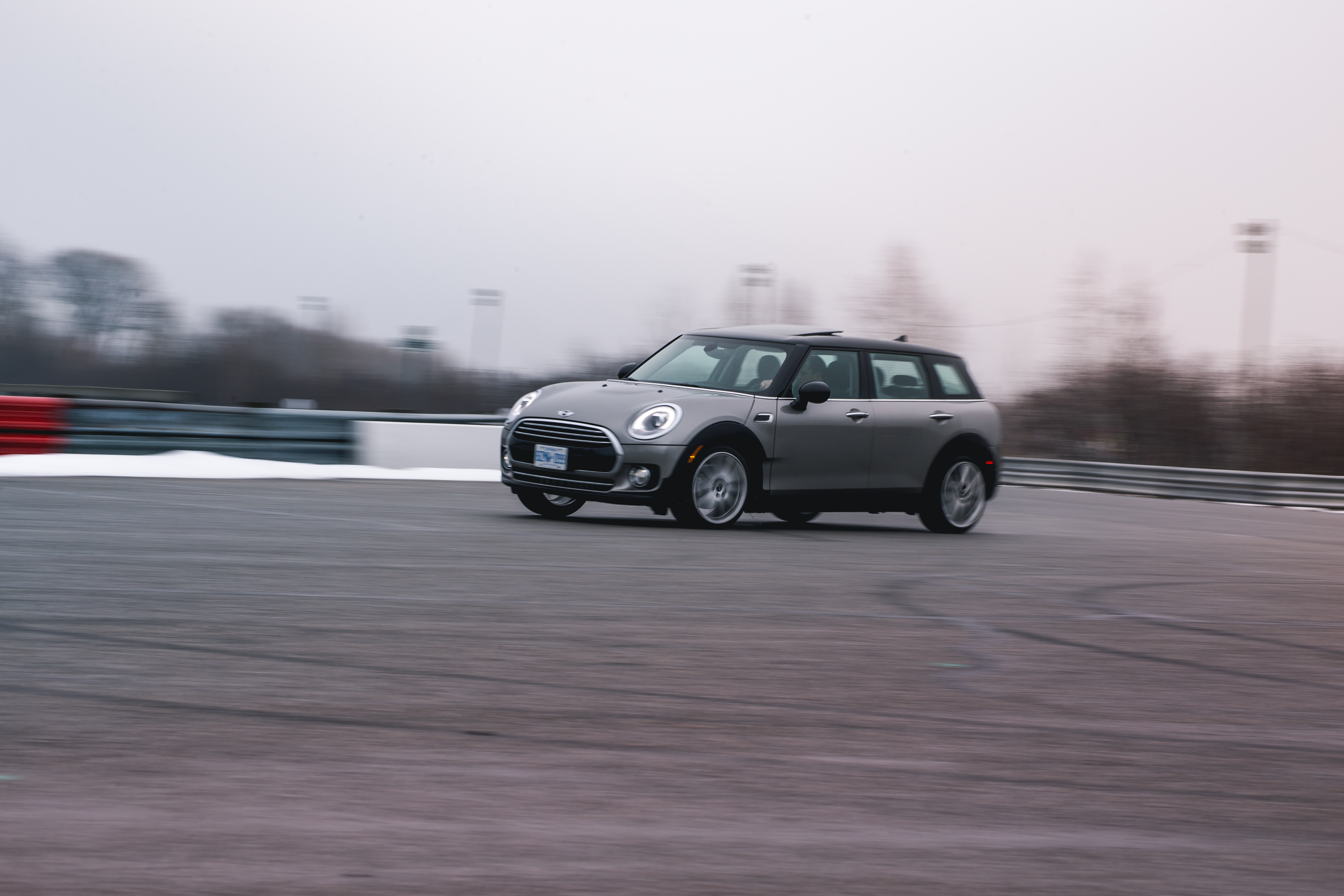 Lately, you’ve probably heard me rant about how the Mini brand has metamorphosed its lineup into average-to-over-bloated-sized vehicles. That’s right my friends; Mini, BMW’s more youthful brand, is no longer mini. It’s huge!

But that’s in part because the entire (North American) automotive industry has gone berserk with bloat lately. And no one will settle for something small. Honda Civics are now the size of Buicks, subcompact cars, such as the Ford Fiesta, look ginormous parked next to a mid 90’s Toyota Camry, and don’t you dare park a new Mini Cooper next to an original Morris Mini – that would feel like parking a kid’s Power Wheels Corvette next to his dad’s actual life-size one.

That’s why words like “small” and, well, “mini” don’t really make sense in this day and age anymore. And I’m well aware that no matter how loud I’ll complain about this heft problem, the industry won’t do a damn thing about it. I might as well get on with my life and continue reviewing cars for what they are. What better way to embrace this new reality than with a Mini Cooper that has a longer wheelbase than a first generation Toyota Rav4?

Not So Big After All 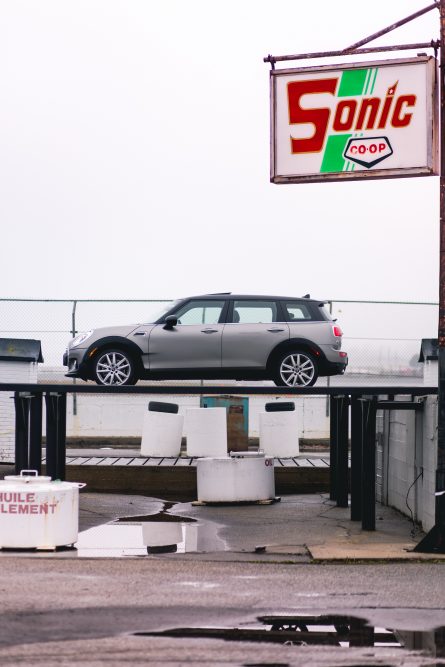 Yeah, ok, Minis are big now. But that disappointment only spawns from the fact that there’s the word Mini slapped onto them. Let’s face it, if the Clubman were the size of a Geo Metro, would people buy it? That said, when looked at as a compact wagon, the Clubman suddenly starts making a lot of sense. Because it’s actually shorter than the VW Golf SportWagen, and just 40 mm longer than a regular 5-door Golf, which means everything is fine in the world again.

So, what is a Clubman? It’s essentially a Mini Cooper that was stretched to add rear leg room and cargo space, because there’s something very appealing about a Mini Cooper that can carry your gear and your friends, right? And yes, with a wheelbase of 2 670 mm, the Clubman is the largest car in the Mini lineup, out-sizing both the regular 4-door Cooper and the Countryman crossover. However, unlike those two modern creations, the Clubman is actually a throwback to the original Morris Mini Traveler that actually existed during the 1960s.

And, like the original Traveler, which was famous for its dual “barn-style” rear doors, the current Clubman also gets a pair of seriously cool-looking suicide doors out back which give way to a surprisingly huge cargo area. Except this time around, the doors can be opened with a foot-activated motion sensor.

So the Clubman is actually a 6-door wagon. 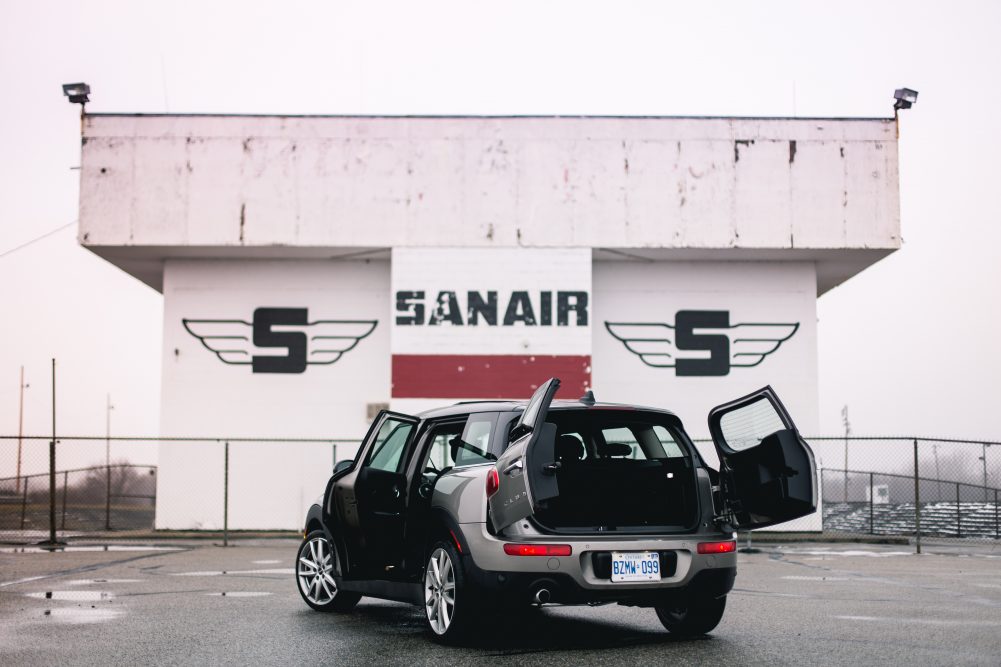 Styling wise, the Clubman has a love-it-or-hate-it design.  After spending a week in one, it had to grow on me. Minis are all about style, and I must say, the Clubman is the more sedate one within the Mini family. It still looks properly joyful though, and that’s cool. Hints of Alec Issigonis’ original design are instantly recognizable through the classic Mini headlamps and front grille, however, this Clubman has the odd tendency to look bloated the moment you set your eyes on it. This really is a Mini Maxi.  It’s only when you park it next to other cars that you realize that’s in reality rather low, sporty and small. That said, the Clubman’s styling may take some time to get used to, but it’s still instantly recognizable as a Mini.

Just one thing BMW: don’t make Minis any larger than this. 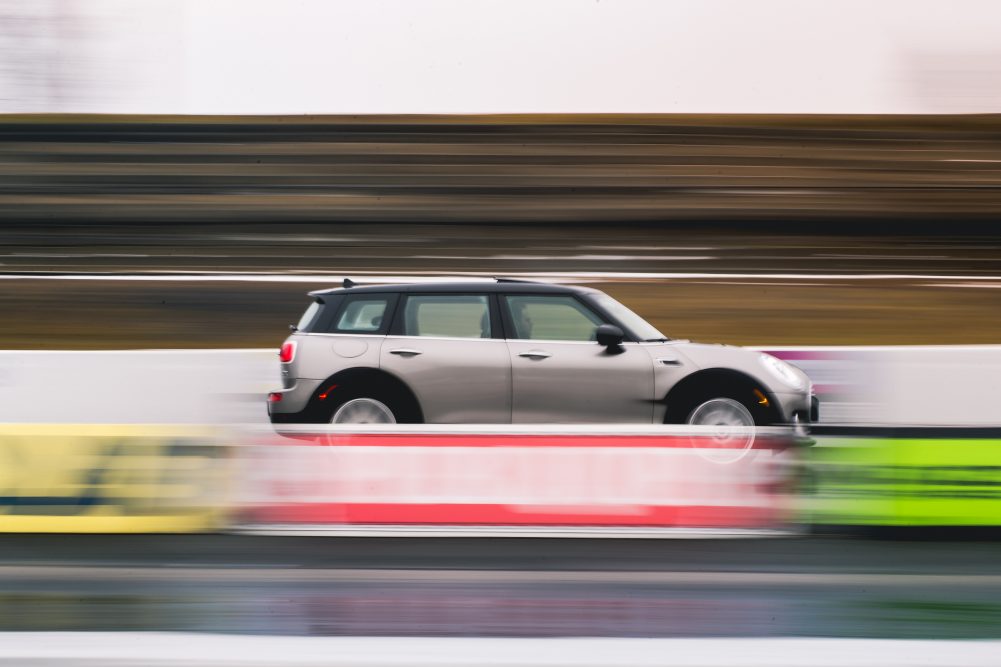 You know, any car that puts a smile on my face when I sit behind the wheel is an instant hit in my book – no matter what it looks like. And that’s probably why I was so kind in my description of the Clubman’s styling above, because this thing is, simply put, stupidly fun to drive. Despite the increased heft, the Clubman remains nimble and tossable at the limit. The first thing you notice is the meaty, small-diameter steering wheel that responds with utter sharpness to each one of your inputs. There’s an eagerness to turn corners in the Clubman that instantly gives it the impression of being a much smaller vehicle that it actually is, one in which you’ll quickly end up hitting highway off-ramps way faster than the law permits. 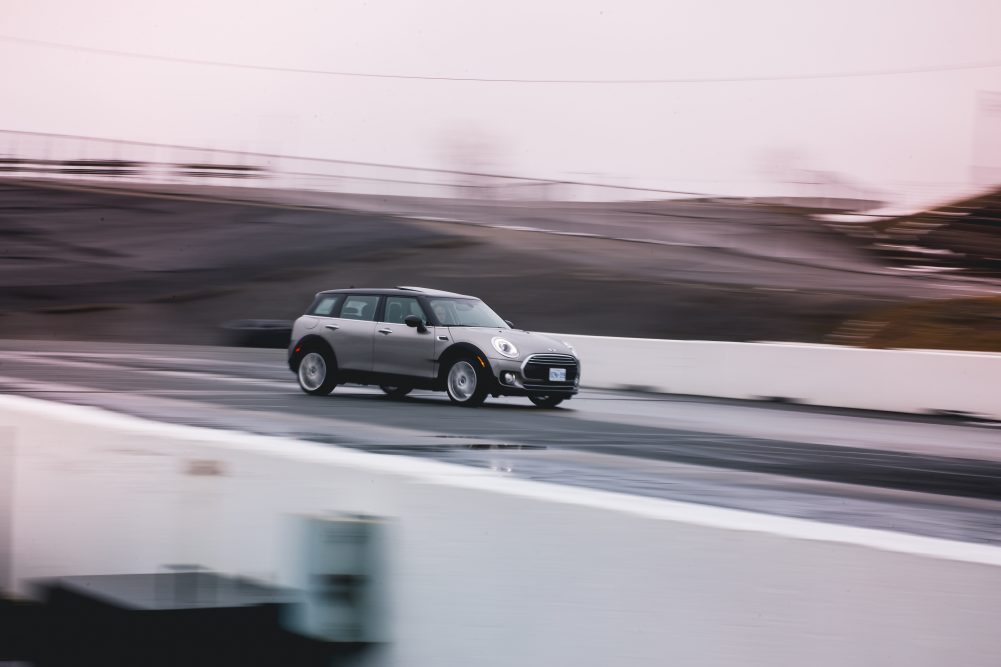 I brought the Clubman to my friends over at Sanair for a quick lap around their facility, and I was surprised at how planted and maneuverable this little wagon felt. While feeling light on its feet, the Clubman retains that solid, Germanic feel that is traditional of BMW vehicles. And even with a damp surface underneath it, the Clubman just gripped and gripped, begging for more as I pushed it to its limits, exhibiting little to no understeer even being front-wheel drive. 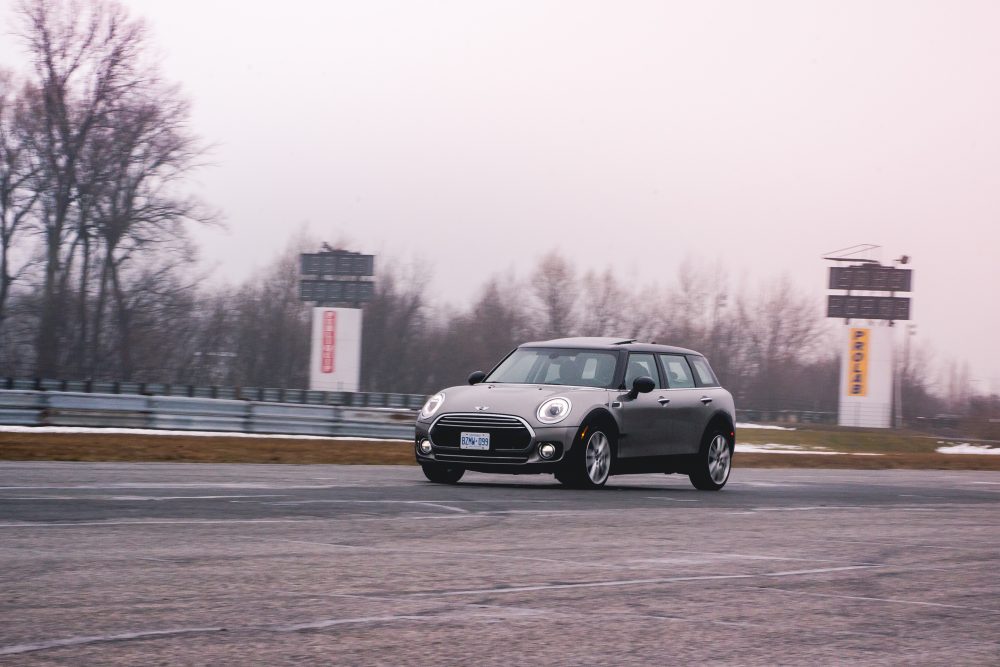 Of course, the reason for this formidable handling is Mini’s all new platform which also underpins the standard Cooper. It features a wider track, further enhancing cornering abilities, high-speed stability, and overall ride quality.

And the Clubman really is a comfortable little cruiser when driven casually. The cabin is quiet, with virtually no wind or tire noise, and although the suspension is set up to be on the firm side, because after all, this is a Mini, the chassis feels solid and stiff, never exhibiting unwanted quibbles or rattles typically associated with small cars. 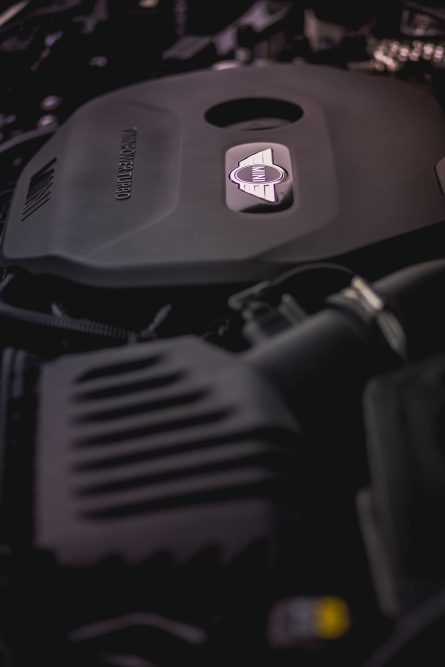 Power comes from a 1.5 L, turbocharged, 3-cylinder good for 134 hp and 162 lb-ft of torque. That little mill can either be bolted onto a 6-speed manual (a manual wagon!) or 6-speed automatic. Opt for the Clubman S, and it’ll come with the gutsier 189 hp 2.0 T. My tester came with the 6-speed automatic, and while I would have certainly preferred shifting my Mini myself, I was pleasantly impressed with this setup. Shifts were seamless, smooth, and quick, feeling more like those of a dual-clutch system. 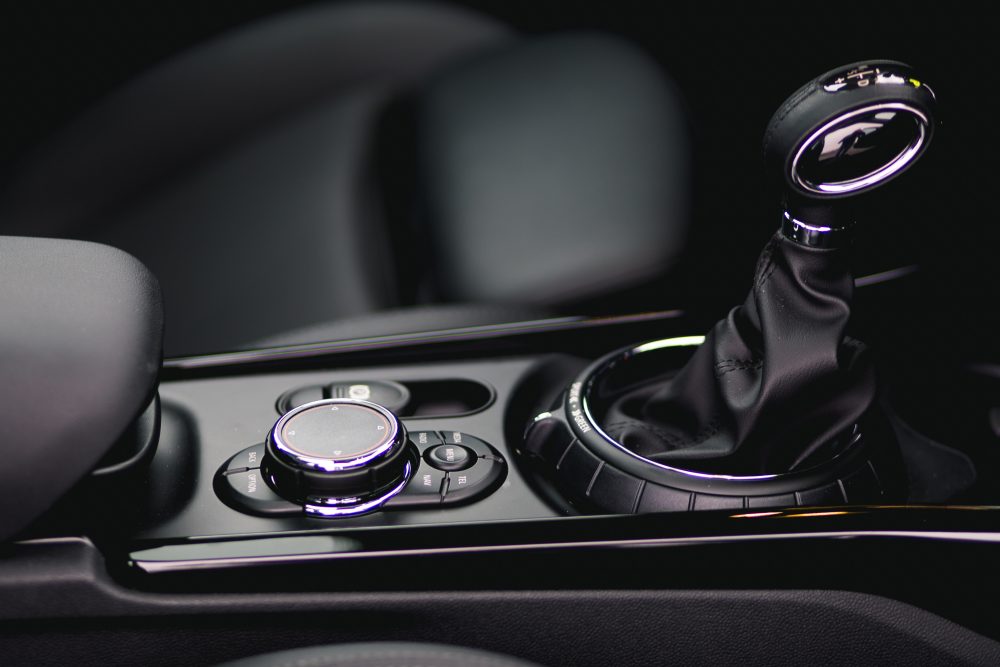 The transmission also does a fantastic job of maximizing the engine’s rorty character, which feels more like a diesel due to its abundance of low-end torque and a refusal to want to rev higher than 5 500 rpm. The Clubman, with the three-cylinder, is not what you would call quick. 0-100 km/h will be achieved in the low eights, but it gets the job done, and never feels under-powered while doing so. 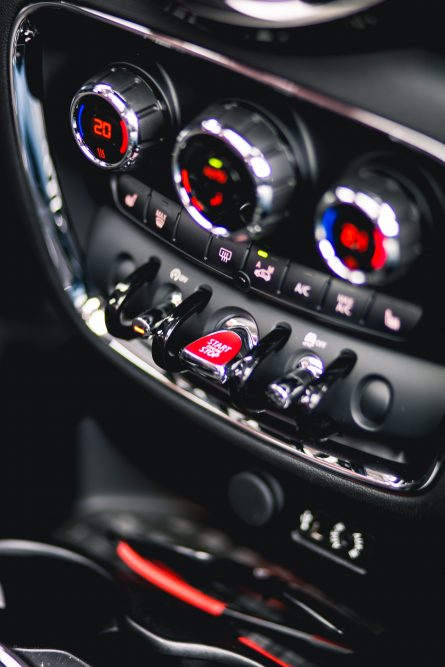 Step inside the 2016 Mini Cooper Clubman, and you’re greeted to one of the funkiest interiors available in any car today. In front of you lies an analog speedometer and a tach that moves with the steering wheel as you adjust it – a feature I found very handy given the fact that I always drive my cars with the steering set way low.

The seats are also formidably well bolstered for hard cornering while providing ample lumbar support during long rides. However, good luck reaching down to adjust those seats through their electric controls. Unless you’ve got the arm of a 5-year old, it’s rather cramped down there. 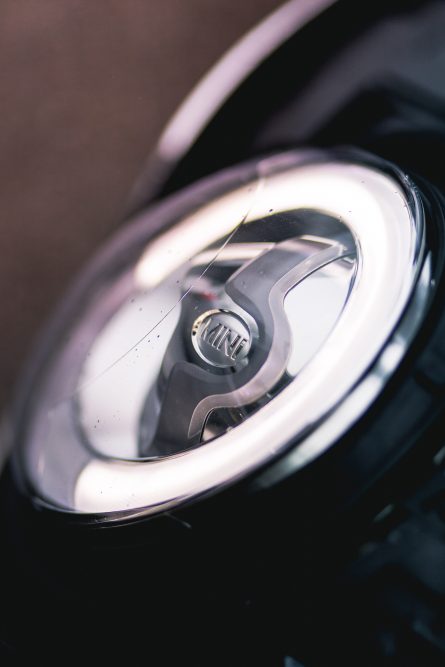 The rest of the cabin is laid out with impressive fit and finish, attention to detail and classic Mini cues. The centre stack is dominated by cool toggle switches and a large circular infotainment system, complete with entertaining animations and ambient lighting that changes according to driving modes and other settings. That system, although a handful to take in at first due to its out-of-the box layout, proved itself to be rather enjoyable to use once I got my head around the complicated controls. And the  last time I witnessed a navigation system that was this attractive and enjoyable to use was in a 100k Volvo SUV. 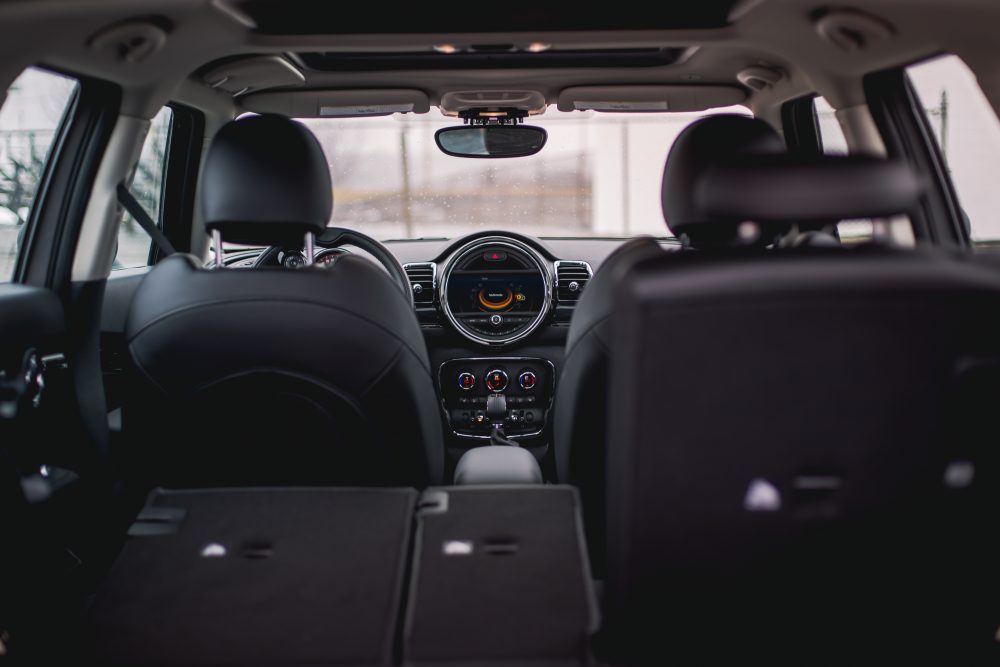 Three drive modes are available in the Clubman: Sport, Mid, and Green – the latter further improving the Clubman’s fuel economy by changing transmission and throttle behaviors. Even in its most thrifty setting though, the Clubman is midpack in fuel economy, with an average combined consumption of only 8.4 L / 100 km.

Select Sport however, and the Clubman’s steering wheel firms up, the car leaps forward, and that centre screen displays an animation of a go-kart and a rocket, with the exclamation “Let’s motor hard!”. 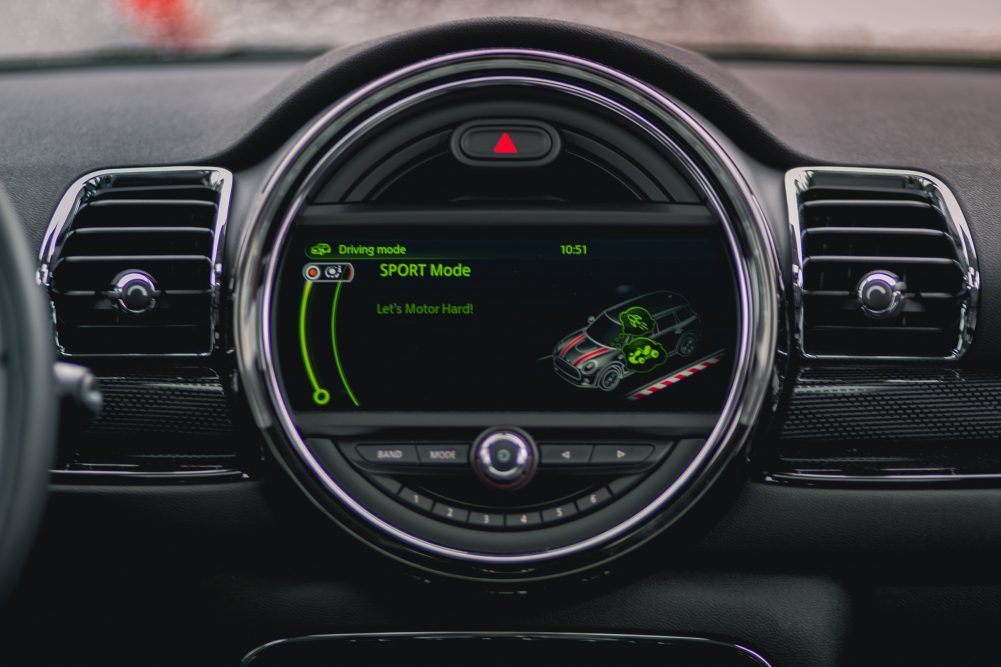 Gimmicky or not, these are simple details that add up to make the Mini feel playful and fun. Any car that gets excited when set to Sport mode wins if you ask me.

Lovable, but Far From Perfect 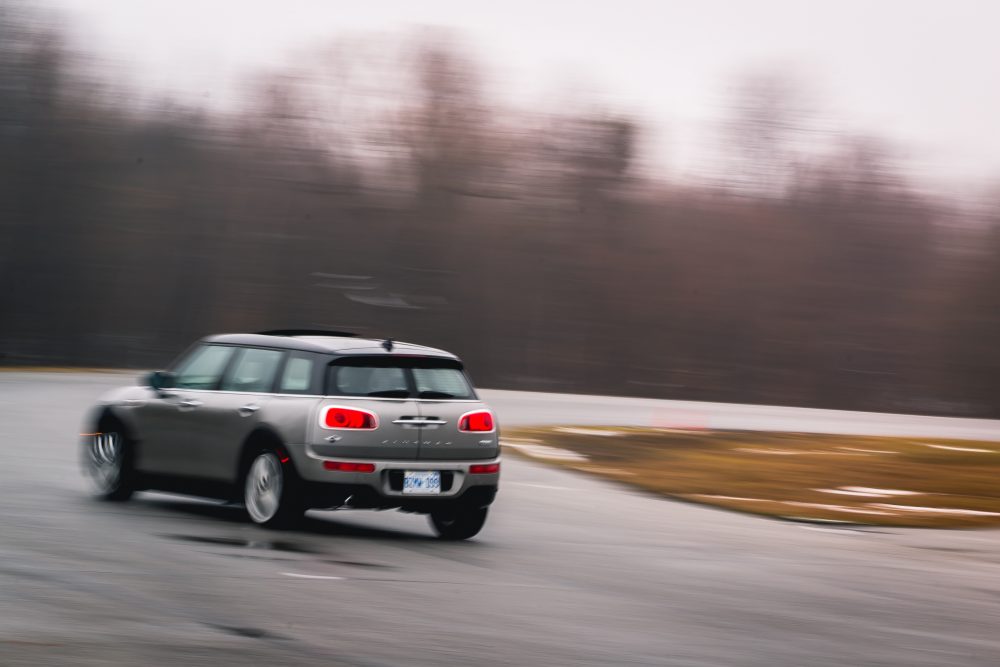 Truth is, even with its faults, it’s difficult not to fall in love with this stretched Cooper. And believe me, there are several things that grind my gears about the Clubman. First, those dual rear doors. As cool as they may be, they seriously obstruct rear visibility due to a thick vertical pillar sitting right smack in the centre of your eyesight. Also, for some odd reason, my tester didn’t come fitted with a backup camera, which is ridiculous considering you can get that standard in a Kia nowadays. You’d think Mini engineers would acknowledge the downsides of those barn doors and fit all Clubman with a backup cam.

Instead, my Clubman was fitted with a useless proximity sensor that only started beeping when it was too late. Also, the Clubman has some of the tiniest rear-view mirrors to have ever been fitted to an automobile, resulting in terrible rearward visibility – especially during parking maneuvers.

Then, there’s the way it’s priced. A base Clubman, which comes pretty naked to boot, sells for $28 085. My tester, which still had the smaller engine and simple options added on such as a panoramic sunroof, LED lighting, 17-inch wheels, the MINI Connected Infotainment system, and other convenience features such as heated seats, sells for a staggering $35 280. At that price, you’re not even in Clubman S territory. 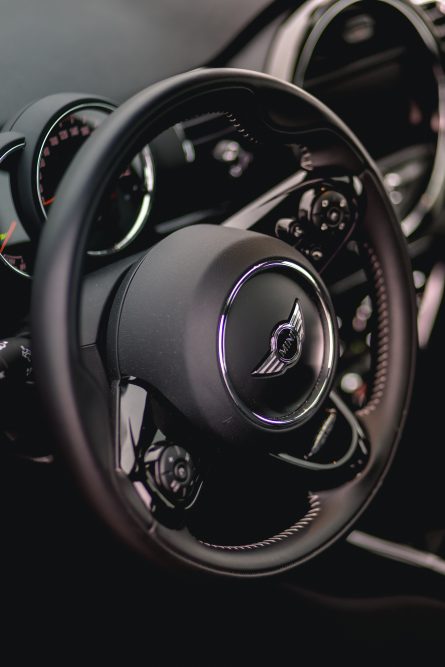 And there’s still no backup camera.

Now, I understand the whole exclusivity aspect of the Mini brand, and I admit, it’s a cool car. It’s also built like a BMW making it a premium product. But 35K for a little wagon that doesn’t offer that much more rear leg room or cargo space than a $25 000 Golf? Which, I’m afraid to say, is a superior automobile in every respect. 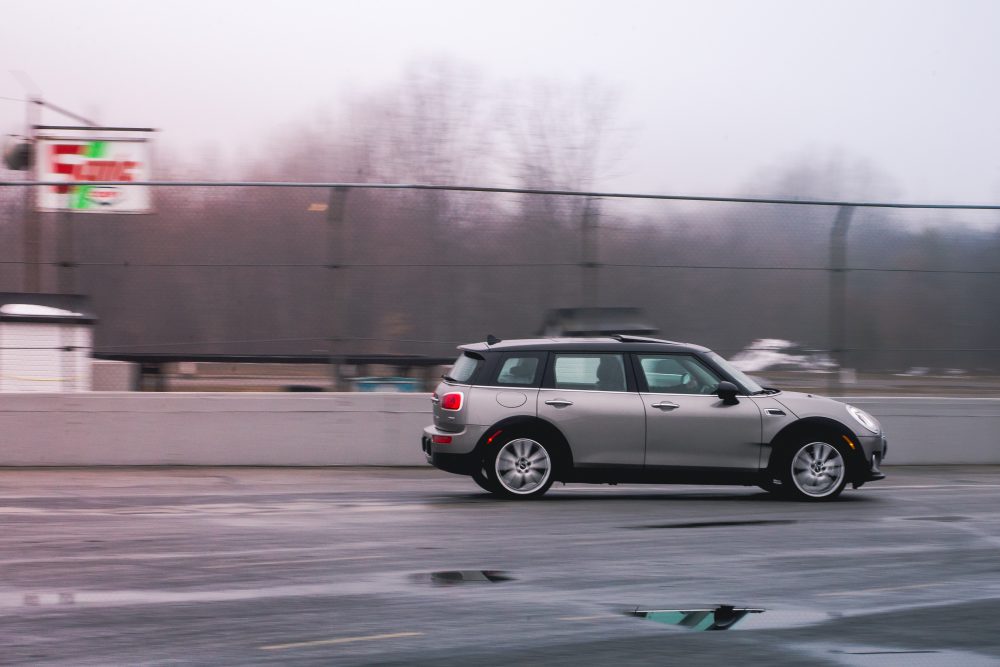 But! The thing is, you don’t buy a Mini out of logic. You buy one out of emotion. And the reality is that no other car in this price bracket offers that much exclusivity, character, and cool factor. And although the Clubman’s flaws infuriated me to the bone, the moment I sat behind its wheel, all of that suddenly dissipated. It’s just so addictive to drive. This is definitely one of the last truly fun-to-drive cars available today, with the added bonus of being a practical wagon.

Simply put, if you were to ask me if I’d recommend buying a Mini Cooper Clubman, from a logical standpoint I’d tell you to go buy a Golf instead. But as I’d be telling you this, my inner child would look at you with a grin and say: “go ahead my friend, you only live once”.