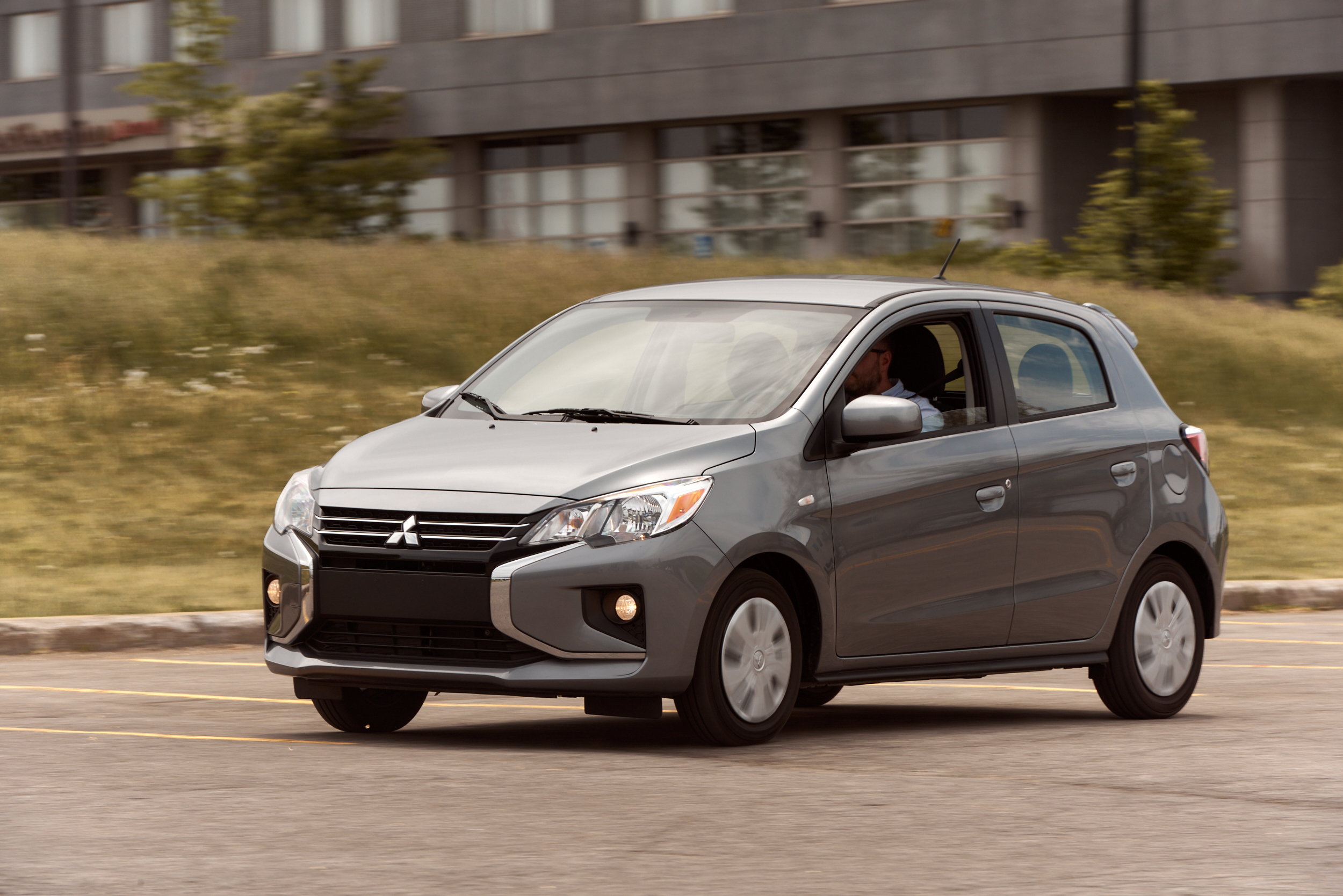 The 2021 Mitsubishi Mirage is currently the cheapest car you can buy in Canada. Correction, the Chevrolet Spark is the cheapest car you can buy in Canada, but only if you pay it cash. The Mirage can be financed, even in its bargain basement ES trim level, which gives it an edge over its main rival. Curious to know what you get from a sub-$15,000 car these days, I asked Mitsubishi Canada to lend me the most stripped out example they could find. Here it is in all its glory. 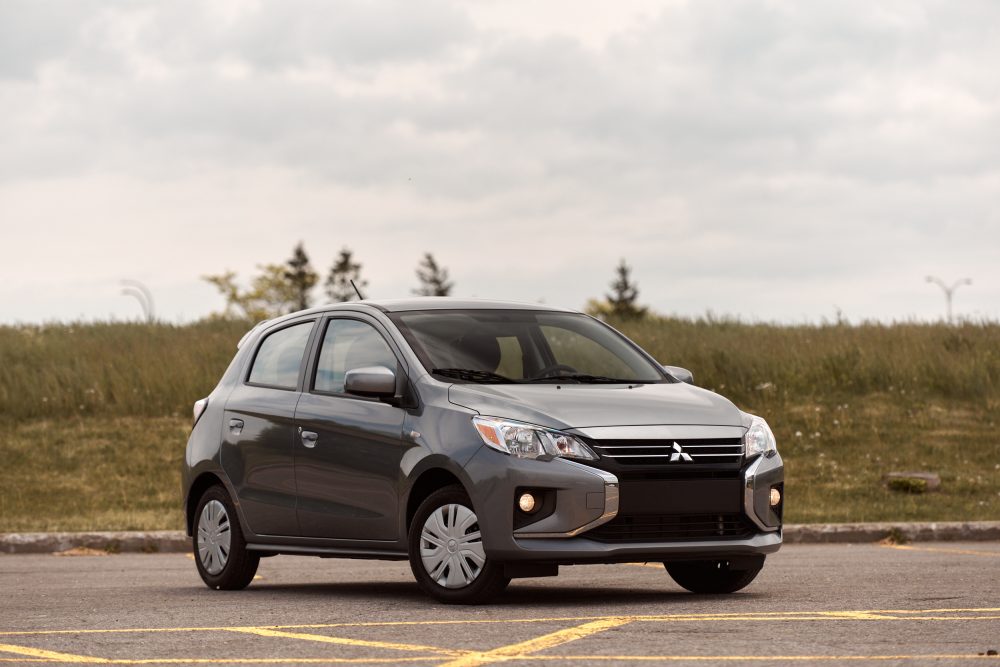 If you’re wondering why I never reviewed any Mitsubishis on these pages it’s because, well, Mitsubishi hasn’t had many new vehicles lately. That seems to be changing now that it’s tangled up with Nissan and Renault. There’s a new Outlander, which is essentially a rebadged Nissan Rogue, but I hear it’s quite decent.

Mitsubishi doesn’t sell that many vehicles, but the ones it does sell aren’t all that awful. Most of them, especially this 2021 Mitsubishi Mirage, still have a surprisingly important purpose: to provide cheap and dependable transportation to people who don’t have a big budget. There are a lot people in that situation, and at the end of the day, you can’t argue against cheap and dependable. 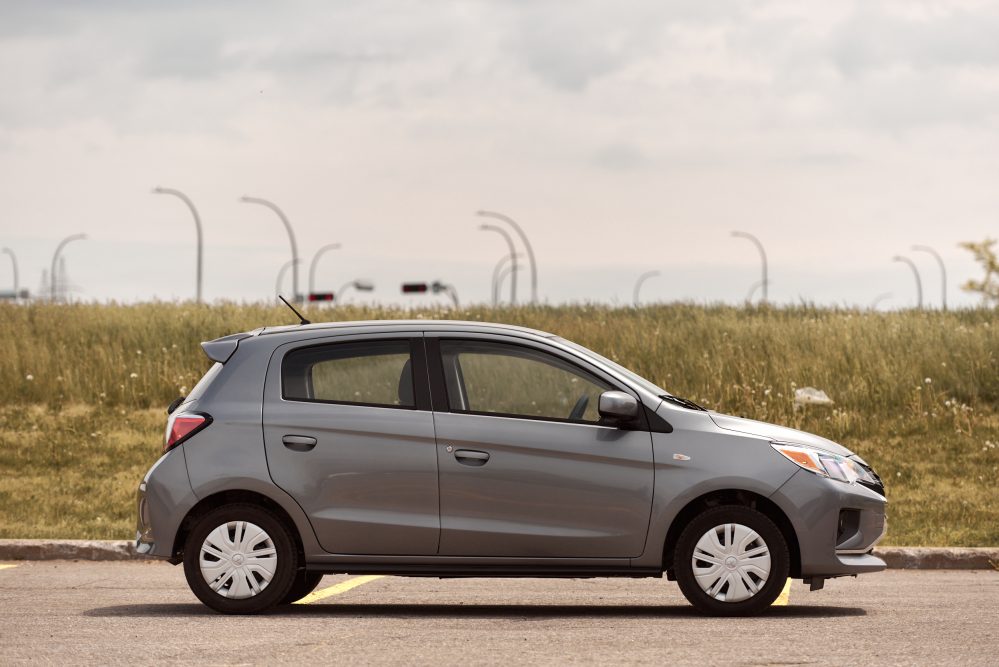 It’s easy then to dismiss the Mirage for being so old, so underpowered and so, well, crappy. But considering how inexpensive these things are, and how cheap they are to own, they end up being rather appealing. I’ll get back to the Mirage’s price later. What I want to talk about first is the styling, which has been updated for the 2021 model year. 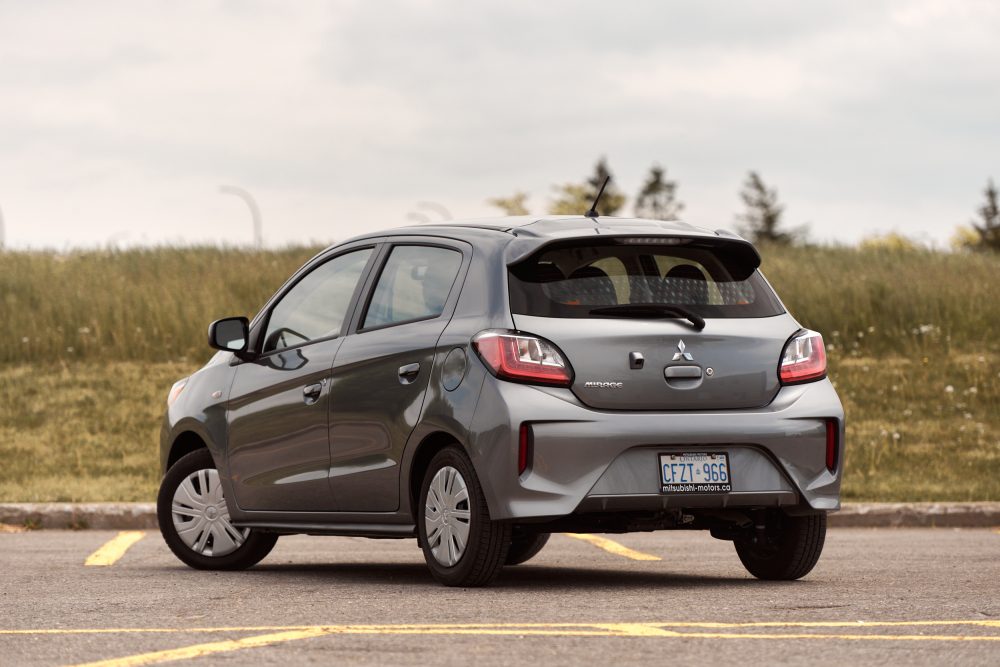 There’s a new front fascia which looks better than before, with a more prominent grille and fancier headlights. The Mirage also has standard fog lamps, which also act as DRLs, like back in the 90s. There’s a new rear as well and more standard equipment, says Mitsubishi. The Mirage also now comes in a fun-looking GT model, that’s sadly overpriced and not worth it. 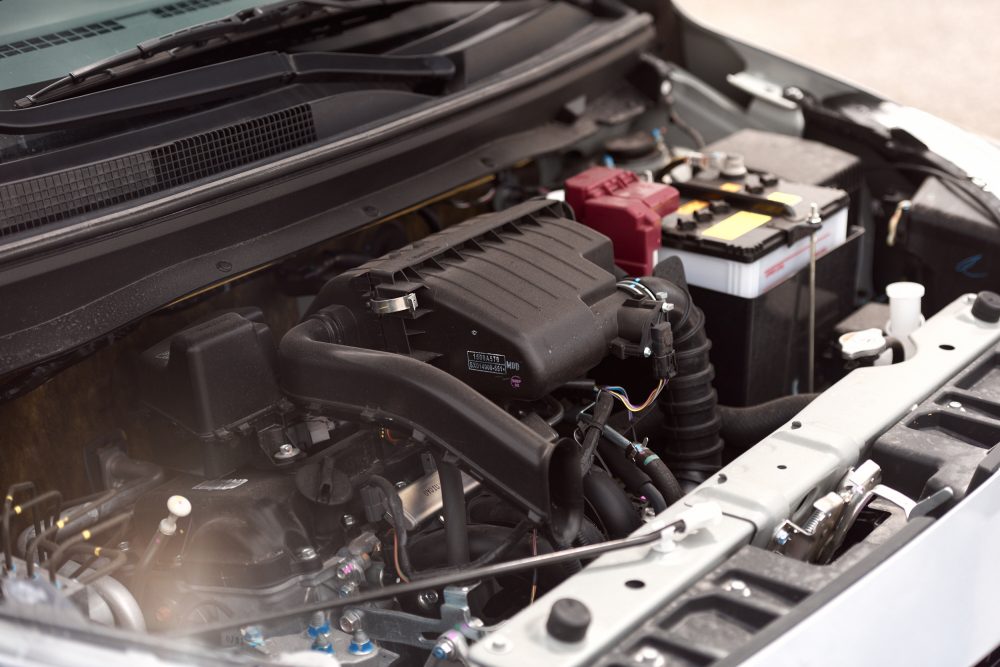 All Mirages are powered by an itsy bitsy 1.2-liter three cylinder good for – cough – 78 horsepower (78!) and 74 lb-ft of torque. That engine can either be paired to a five-speed manual transmission on the base ES you see here, or a continuously variable automatic transmission (CVT) on all other trim levels. That’s a let down, because with so little power available, you want to be able to row the gears yourself, but also get more equipment. 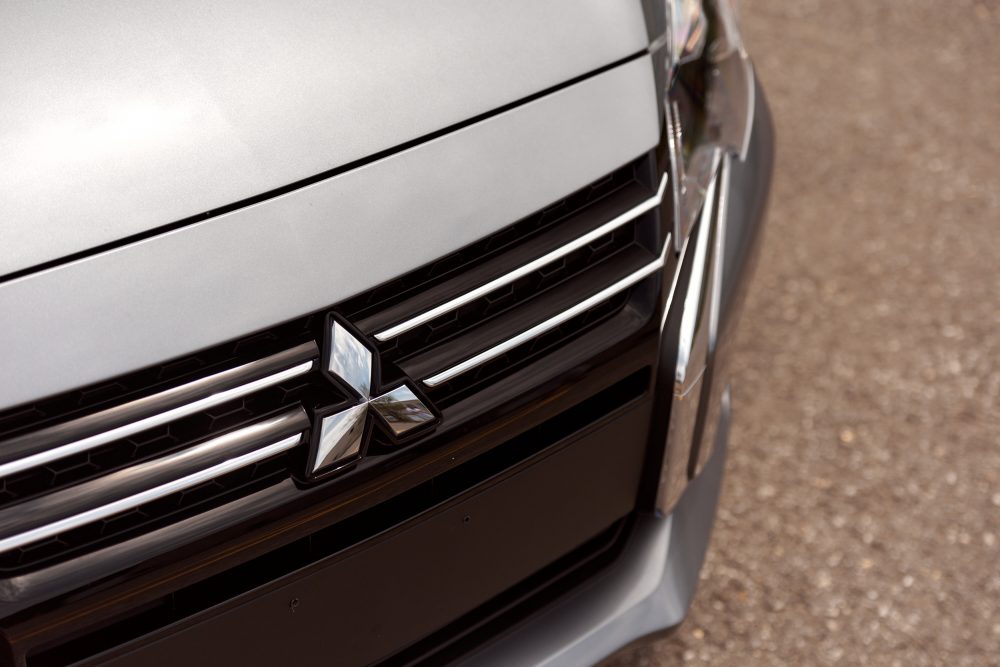 Pricing is where things become very appealing, but only if you stay in the lower trim levels. Entry price for an ES is a remarkably affordable $13,858 and will extend all the way to $20,158 for the GT model I mentioned early, but isn’t worth it considering you can get a base Nissan Sentra for similar money. 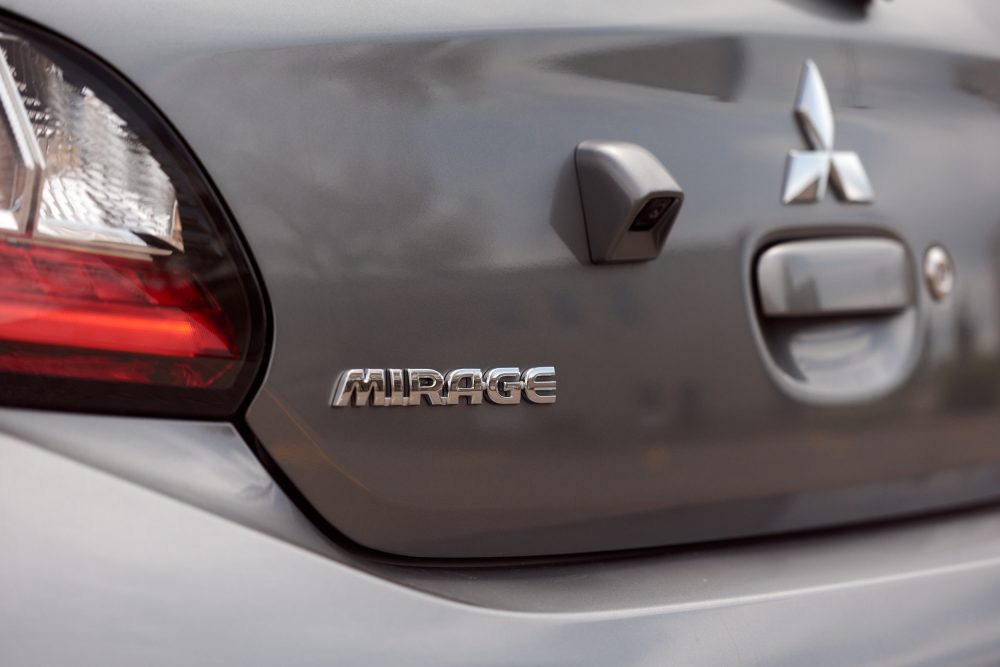 What does a Mirage ES get you for that price? Not much. But it does come with air conditioning, a back-up camera (which is now mandatory here in Canada), Bluetooth connectivity, one (!) USB port and power windows, but only for the front doors. I kid you not, the rear windows are manually operated. Check it out: 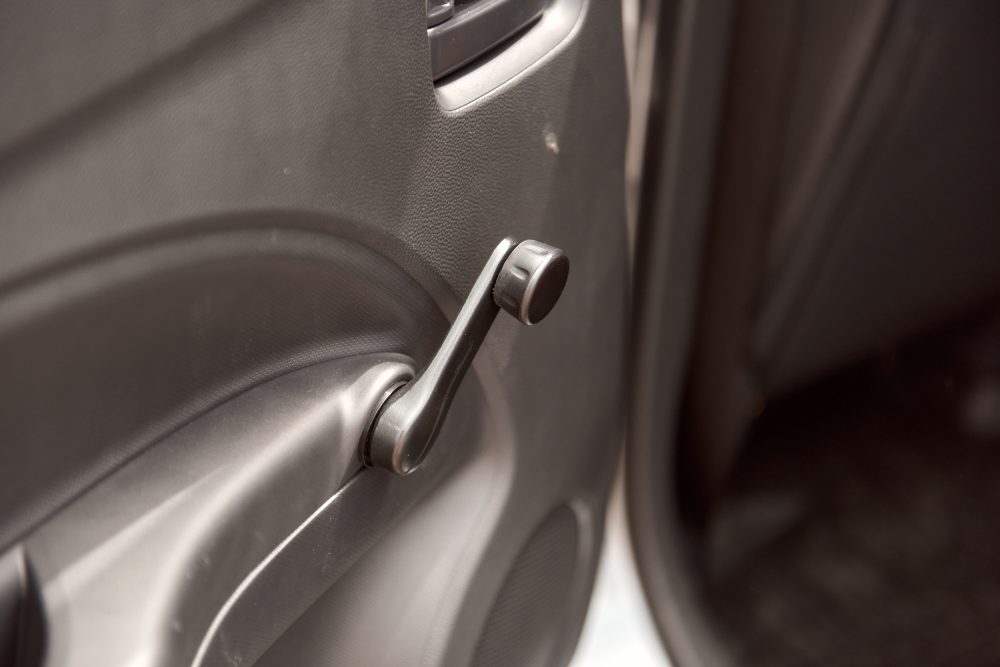 At this point it’s important to mention that the Mirage’s only real competitor, the Chevrolet Spark, comes standard with Android Auto and Apple CarPlay connectivity, as well as available WiFi all for about $500 less. You therefore get more for your money with a Spark, which also has more power thanks to an extra cylinder. But then, the whole financeable aspect of a base Mirage remains more appealing, especially for people on a tight budget, who remain this car’s target buyers. Mitsubishi will also back the car up with a 10-year, 150,000 km drivetrain warranty, so there’s that.

Slow, But Not That Slow 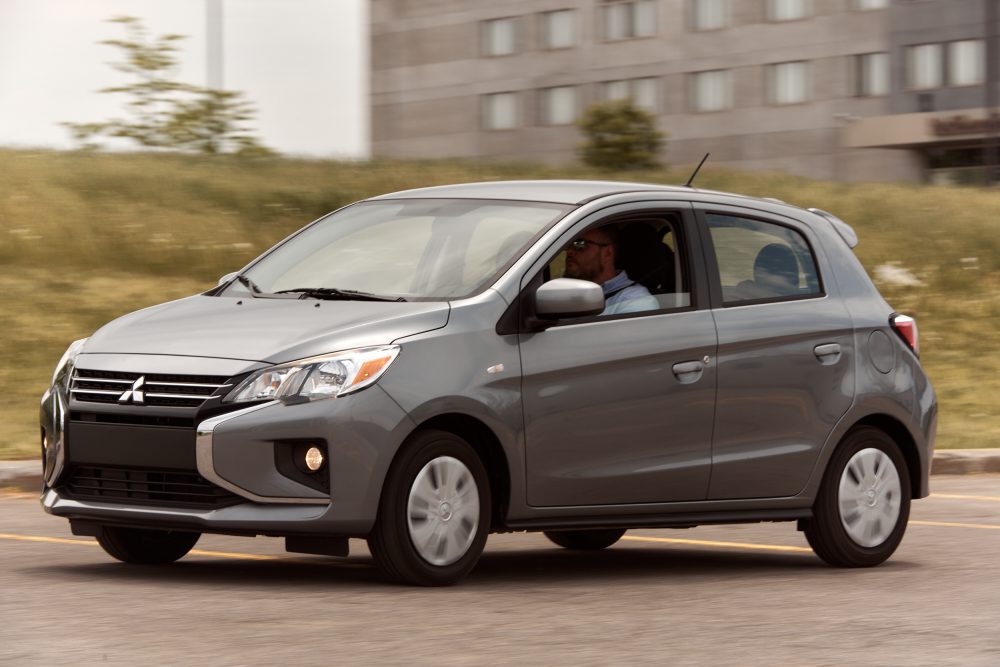 I was expecting the Mirage to be painfully dreadful to drive, but it’s actually not that bad. Ok, fine, it feels like it just time warped from 1999, but the power delivery from that three-cylinder engine, especially thanks to the manual transmission, is more than ample. I’d even say that the car is peppy and energetic, but you really need to thrash it for it to actually go. 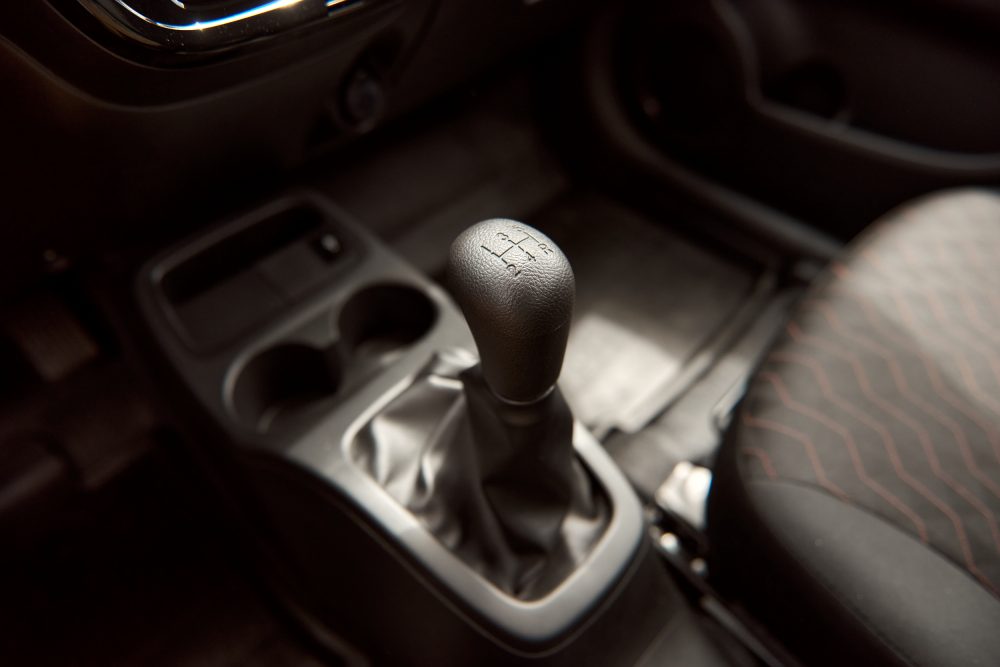 The gear shifter is the worst though. There’s no sense that it’s connected to anything. The throw is long, notchy and sloppy. The clutch has no feel, neither does the steering wheel, but since the Mirage is so tiny and light, it’s fun to chuck around. It’s best at home in heavy traffic or in tight urban areas. But out there on the highway, it gets quite loud in that tin-can cabin. There’s no cruise control, meaning your right foot will get tired fast. It’s also not the most stable ride at high speeds. 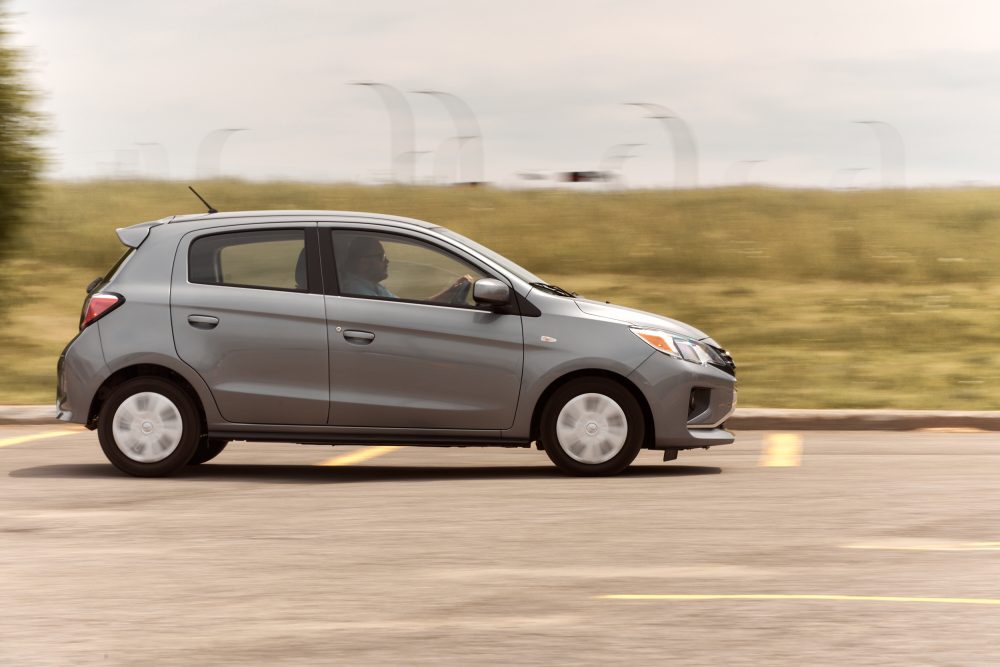 It is a very fuel-efficient machine though. During the entire I had the thing, the onboard computer never went over the 5L/100 km mark. At times, it even went down to 4.7L/100 km! Sure, you could argue that a Toyota Corolla hybrid can do the same, but you could buy two Mirages for the price of one Corolla hybrid. Plus, not everyone has 30 grand to put on a car. The Mirage’s three-cylinder engine may be an old-school way of saving fuel, but it still works. 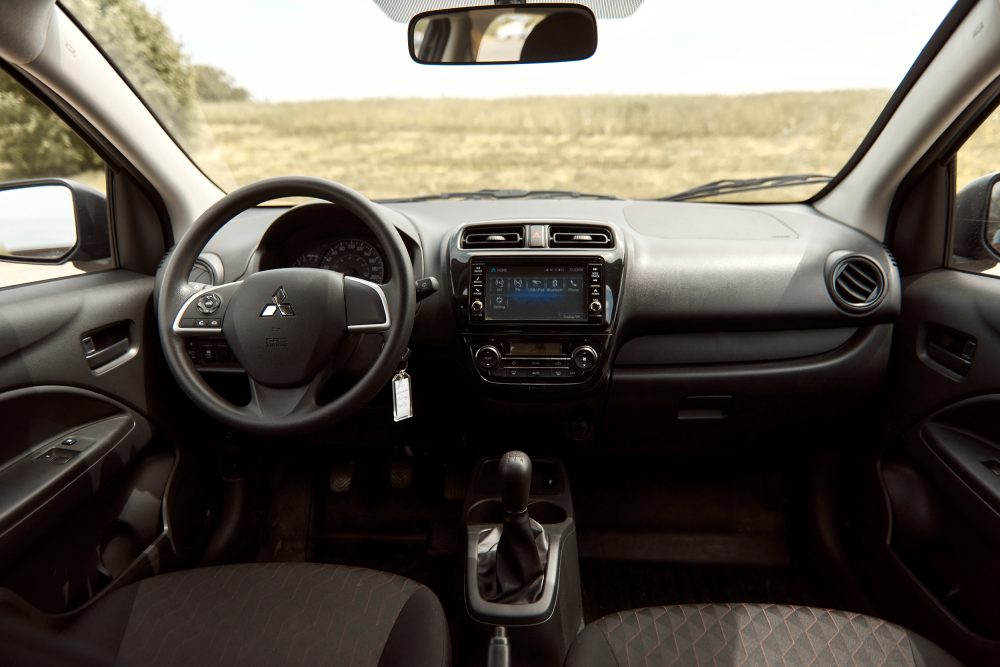 Inside, the Mirage ES is, well, very basic. The seats aren’t particularly comfortable and cabin materials are definitely not up to par with current industry standards, but the build quality is there. The Mirage’s simplicity and lack of technology is also refreshing in a world of highly complicated and digital cars. 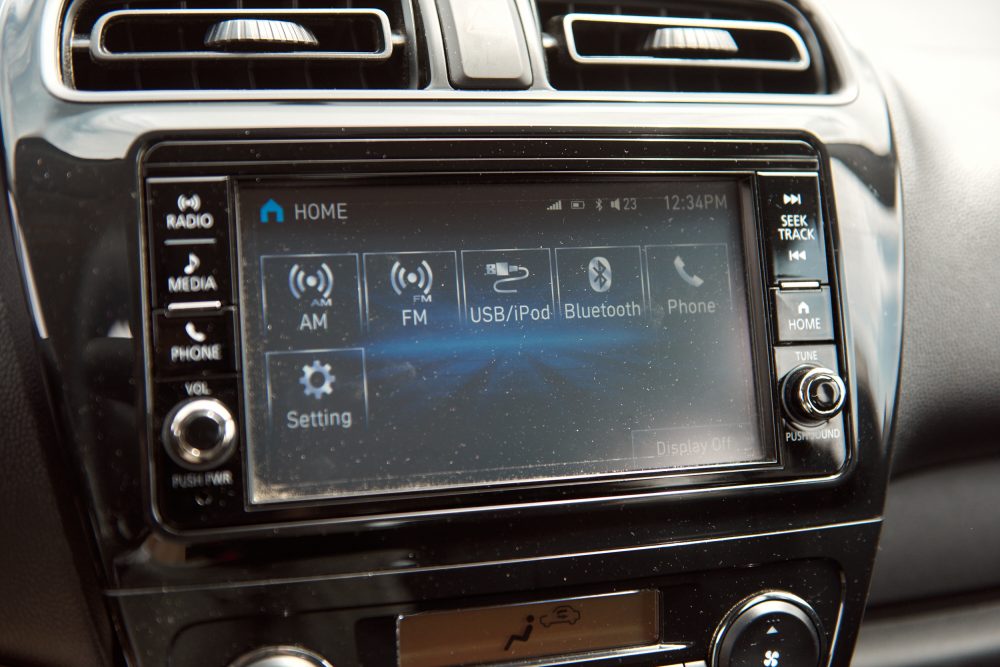 The gauges are all analog, showcasing only the most crucial information. There’s just no bull in a Mirage, it’s just a car. There is an infotainment system, but again, it doesn’t have that many features. The system itself responds quickly, but the screen’s brightness is really off, to the point where you can barely see anything through it during a bright sunny day. 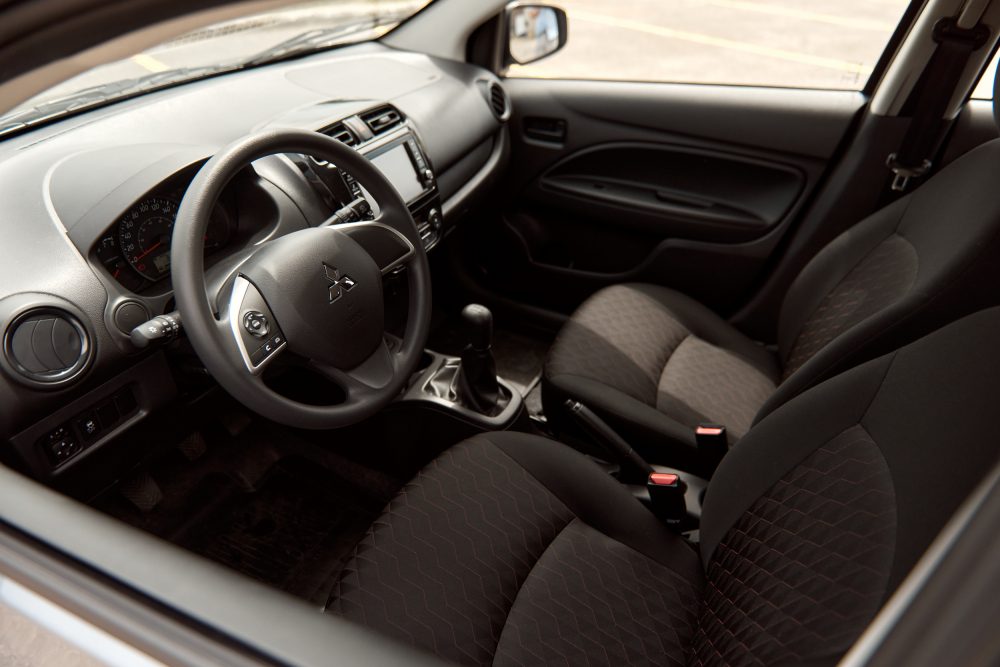 To my astonishment, I discovered that there’s an ample amount of room inside a Mirage. I’m a big guy and while I do appear cramped driving the car in the photos, I was able to find an acceptable seating position nevertheless. It’s the same story out the rear. It’s surprisingly roomy considering how tiny the car is, but I wouldn’t recommend sitting three people back there. The car is just too narrow for that. For kids though, it’s perfect. 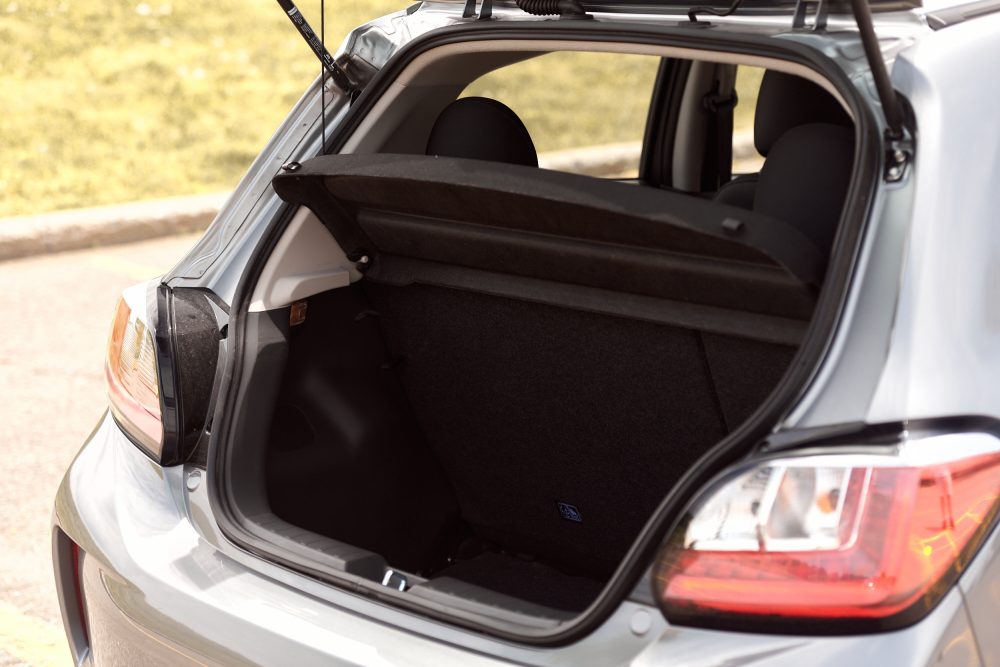 Finally, cargo space is considerably better than what a Spark offers. Once the Mirage’s rear seat is folded flat, the car will swallow up to 1,331 liters of your gear, which completely pulverizes a Spark with its measly 770 liters. The Mirage even more practical than a Hyundai Venue, which technically qualifies as an SUV (even if it’s not). 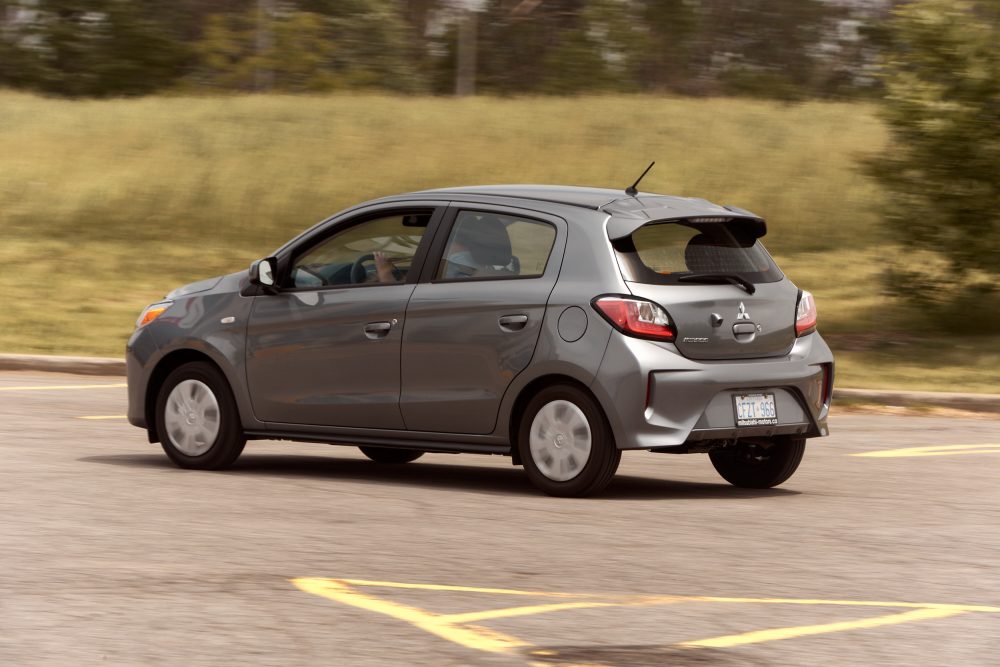 The 2021 Mitsubishi Mirage isn’t powerful, nor is it modern or particularly sophisticated. But it’s affordable, super reliable, cheap to run, and extremely fuel efficient. Those are the kinds of qualities that still make a car relevant, especially in this day and age of overpriced automobiles. If you’re a new driver, a student or simply someone who doesn’t want to dump a lot of money on a car, then the Mirage is a cheap and reliable way to get from point A to point B.