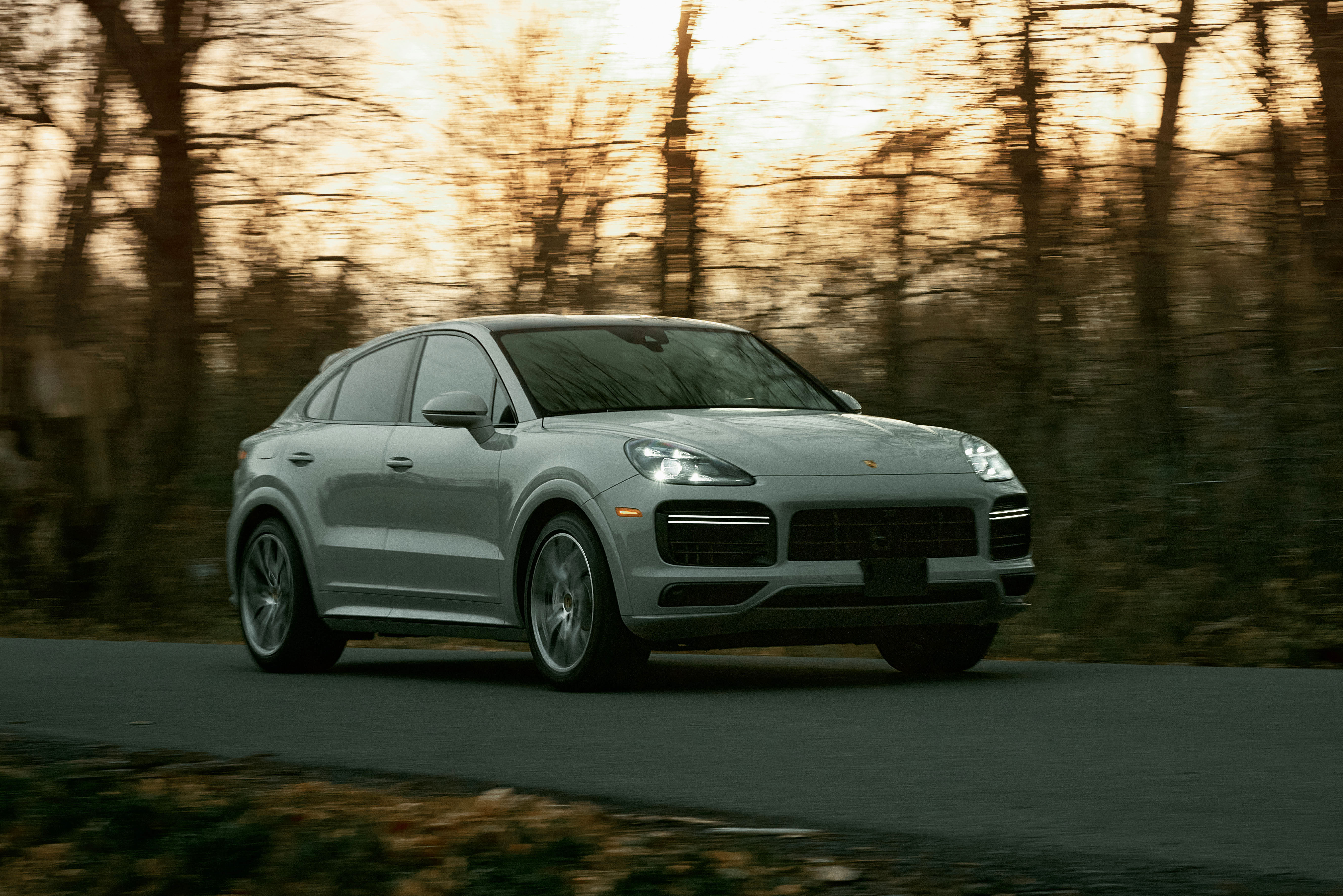 The 2021 Porsche Cayenne Turbo coupe is not the type of vehicle I particularly like, or even understand. But it sure as hell excels at what it is. Very much like other Cayenne versions, this thing is just so damn perfect that it renders me obsolete. More importantly, the Cayenne Turbo coupe proves that no matter what you throw at Porsche, it’ll regurgitate it back into a segment leader. 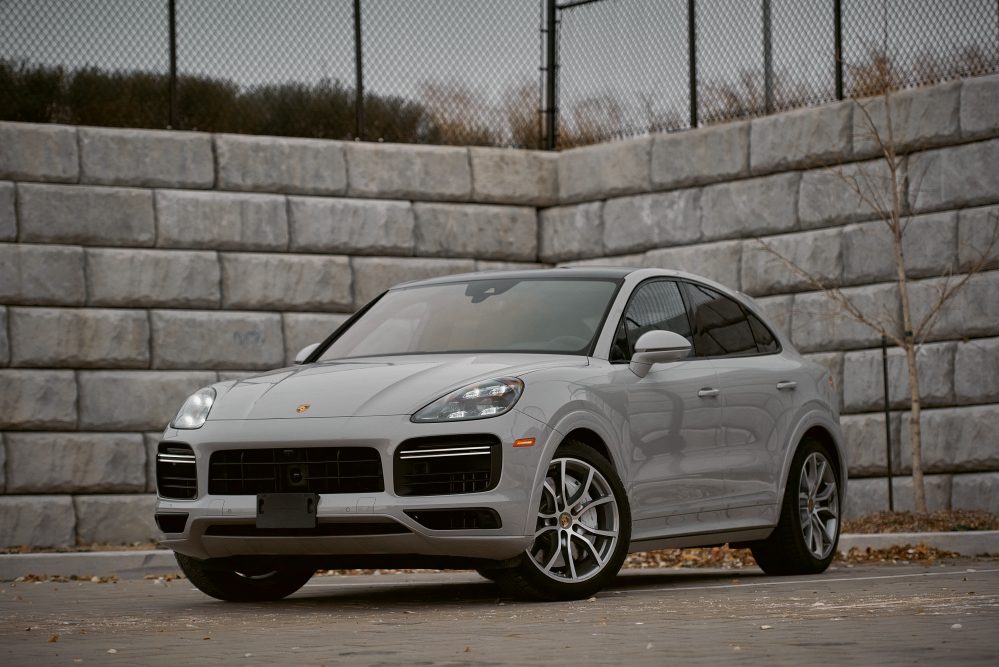 Do we need a coupe version of the Porsche Cayenne? Of course we don’t. But this is a trend, one that’s ironically gaining a lot of traction, especially from German luxury carmakers. Here’s an interesting story: just about a year ago – before this COVID-19 mess happened – Mercedes-Benz flew me over to Austria to drive its new GLE coupe, a direct rival to this Cayenne. 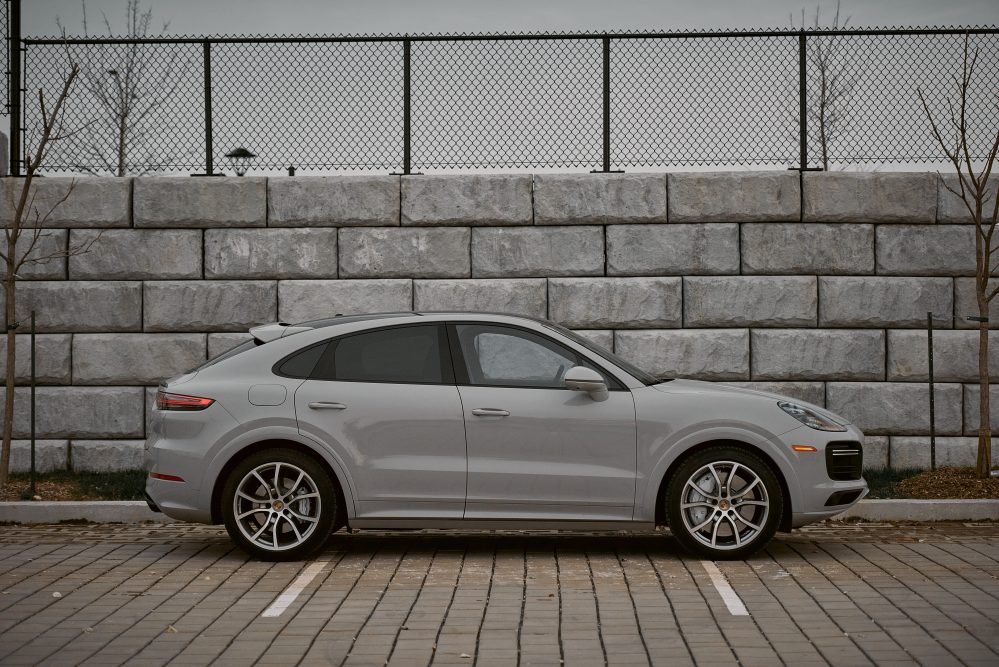 We were in Austria because Mercedes wanted to show us how popular these coupe SUVs are up in the Alps. At one of the ski resort parking lots, the reps were proud to show us all the BMW X6s, Audi Q8s and Mercedes GLE coupes lined up in front of the cottages. Sigh. 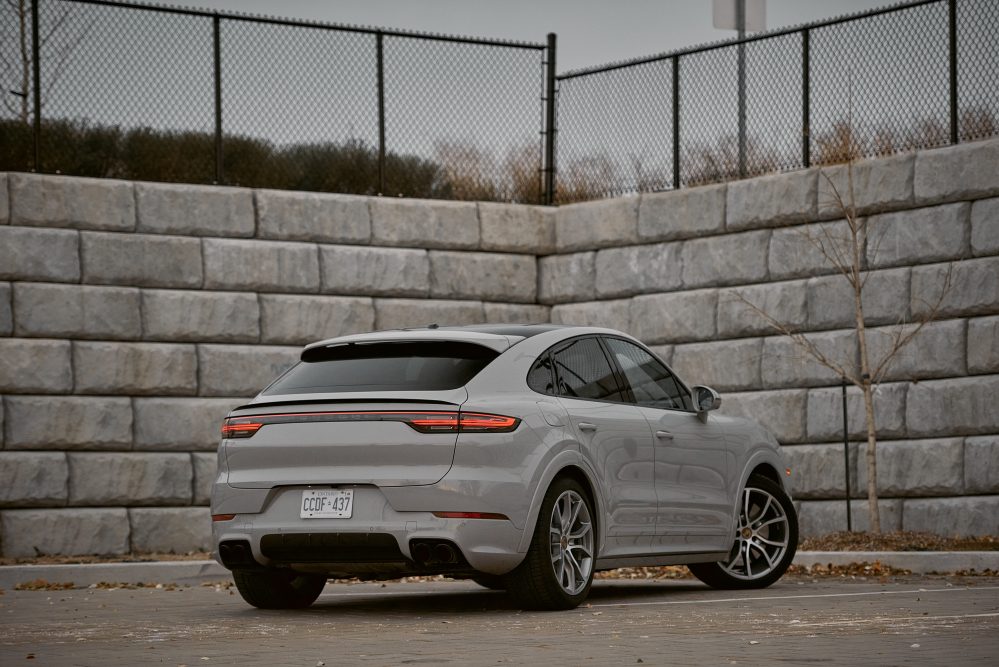 This is therefore why Porsche is taking a hit at this segment as well. Plus, the one I was driving was a Turbo, making it a direct rival to the AMG, M and RS versions of its competitors, but also the equally ridiculous Lamborghini Urus, which ironically borrows its architecture from this Porsche. 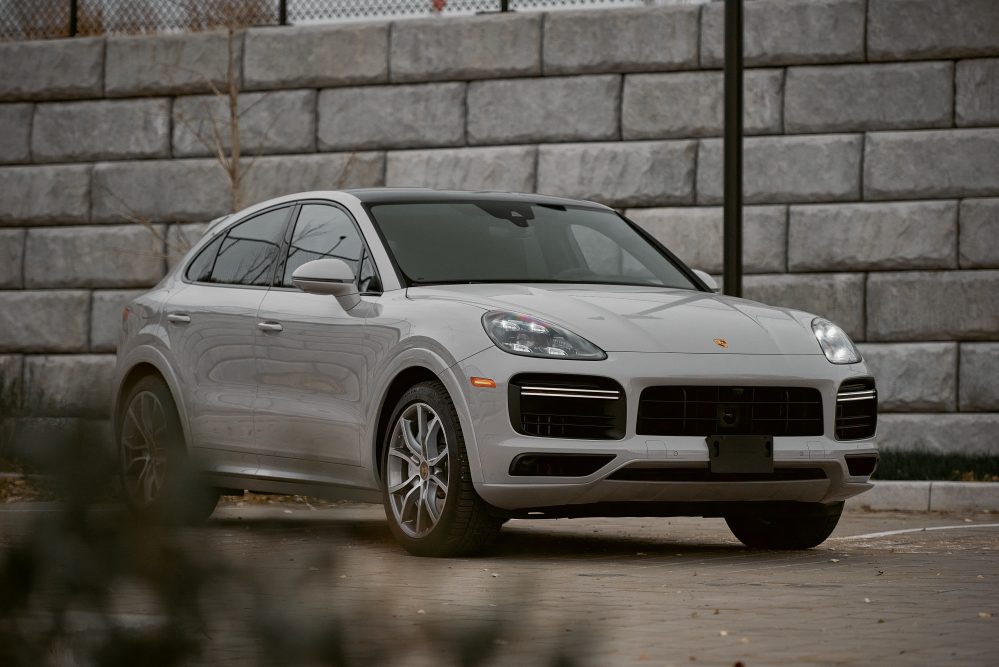 And it really is just that; a coupe version of the Cayenne, meaning it rides on the exact same platform, but with an 18 mm lower roofline, as well as rear fenders that were widened another 18 mm. Total length is exactly the same as a standard Cayenne. 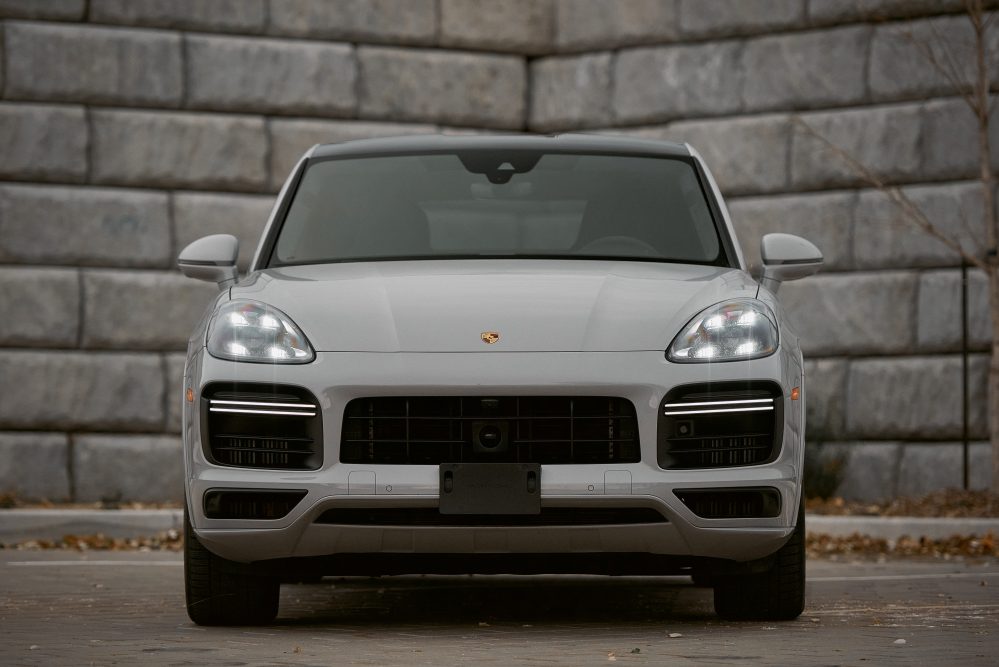 I’m going to come out and say that I find this looks much better than an X6 or a GLE coupe. Perhaps only the Audi Q8 is prettier. I’m a fan of that clean, tapered rear end with no badges (a Porsche option), with the subtle, yet so badass rear wing spoiler that retracts only once you hit 90 km/h. 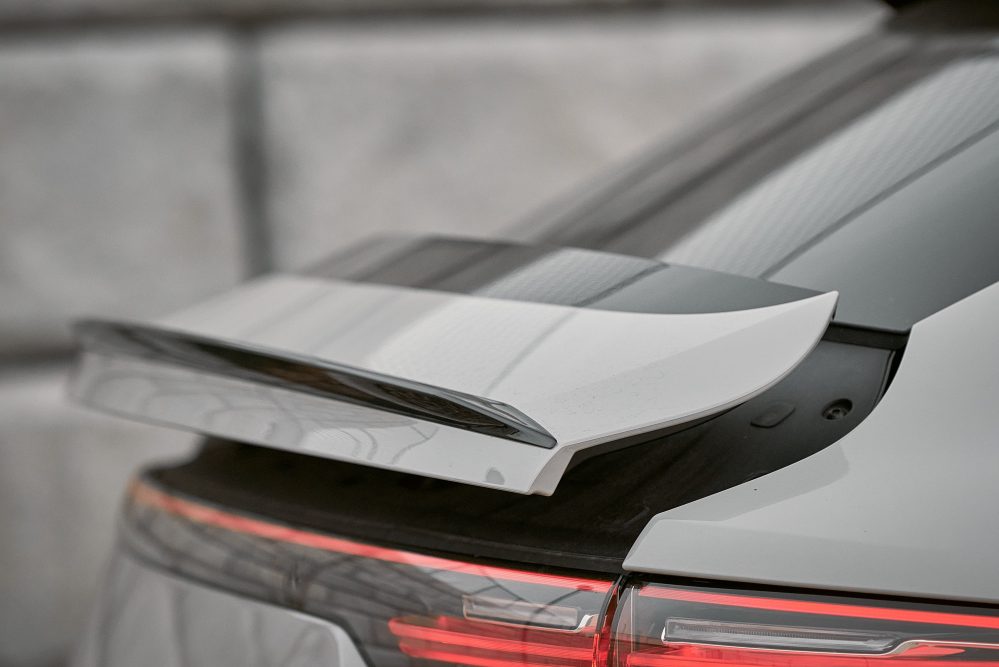 Power is a direct carryover from the Cayenne Turbo, a twin-turbocharged 4.0-liter V8 good for 541 horsepower and 567 lb-ft of torque. It’s mated to an eight-speed automatic gearbox and all-wheel drive as standard equipment. 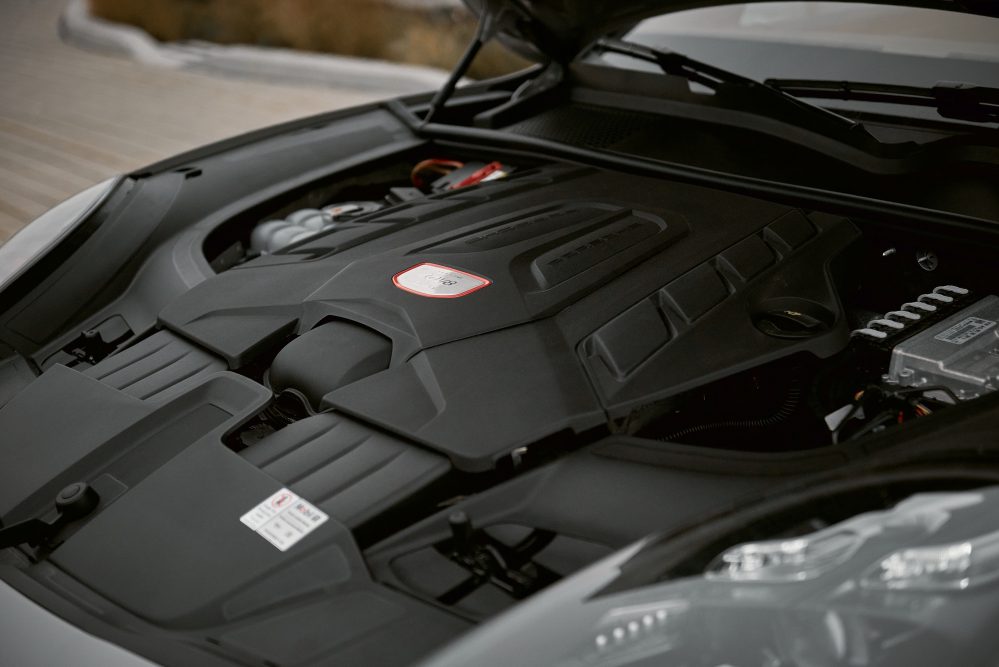 Once you activate launch control and engage the vehicle’s Sport Response setting, which yields extra boost for a short time period, the 2021 Porsche Cayenne Turbo coupe will launch from 0 to 100 km/h just under four seconds flat. It will then carry on to a claimed quarter mile time of 12.3 seconds. Not bad for a 4,500-pound SUV.  Although it’s still a bit slower off the line than a Jeep Grand Cherokee Trackhawk. This makes me giggle inside. 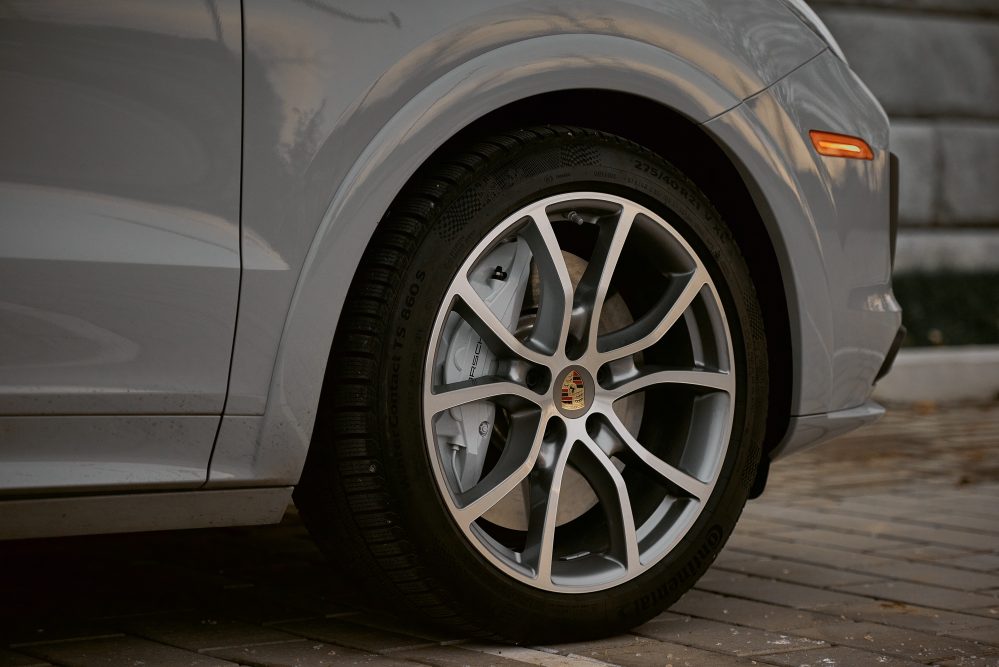 Obviously, all this Porsche-signed performance comes at a price. Expect a base Cayenne Turbo coupe to be on average $10,000 more than anything comparable from Audi Sport, BMW M or Mercedes-AMG, kicking off at a steep $148,000. But wait. That’s before piling on the ridiculously priced options, a now expected Porsche annoyance. For instance, the Chalk paint job on my tester sells for $3,590 for Christ’s sake. Final price for the example you see here is therefore $192,900. Gulp. 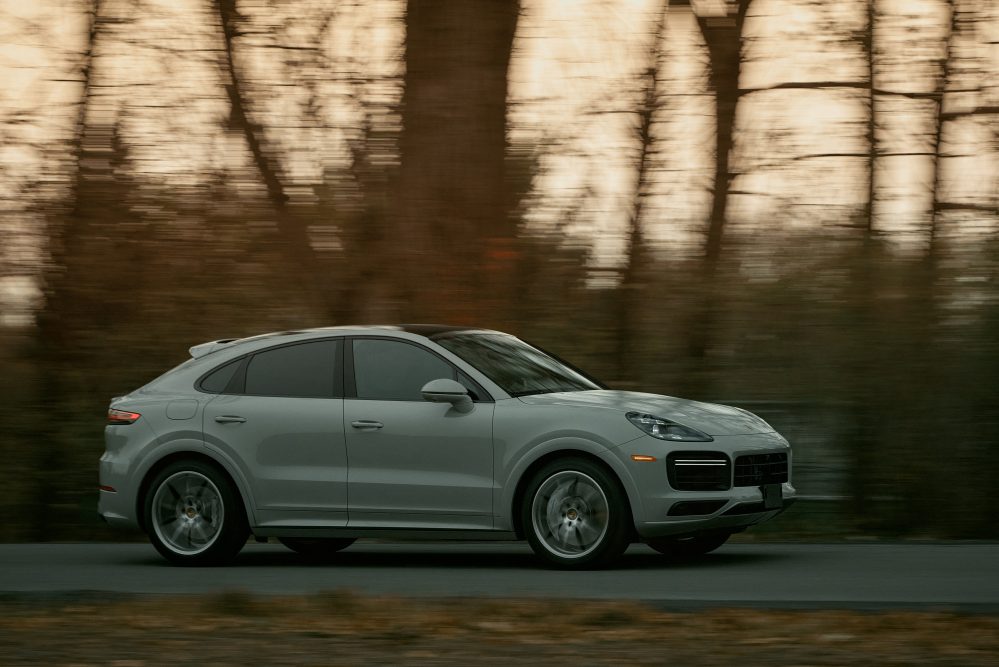 Just like it’s very much the case with its sports cars, the moment Porsche enters the SUV ring, it’s typically game over for everyone else. The 2021 Porsche Cayenne Turbo coupe is that too. I’ve always said that the Cayenne and Cayenne S both feel like they’re missing something, as though they’re incomplete. But the Turbo is an entirely different story. Fine, you need to pay large sums of money to get the same kind of performance as a BMW M or Mercedes-AMG equivalent, but the reward is totally worth the extra pennies. 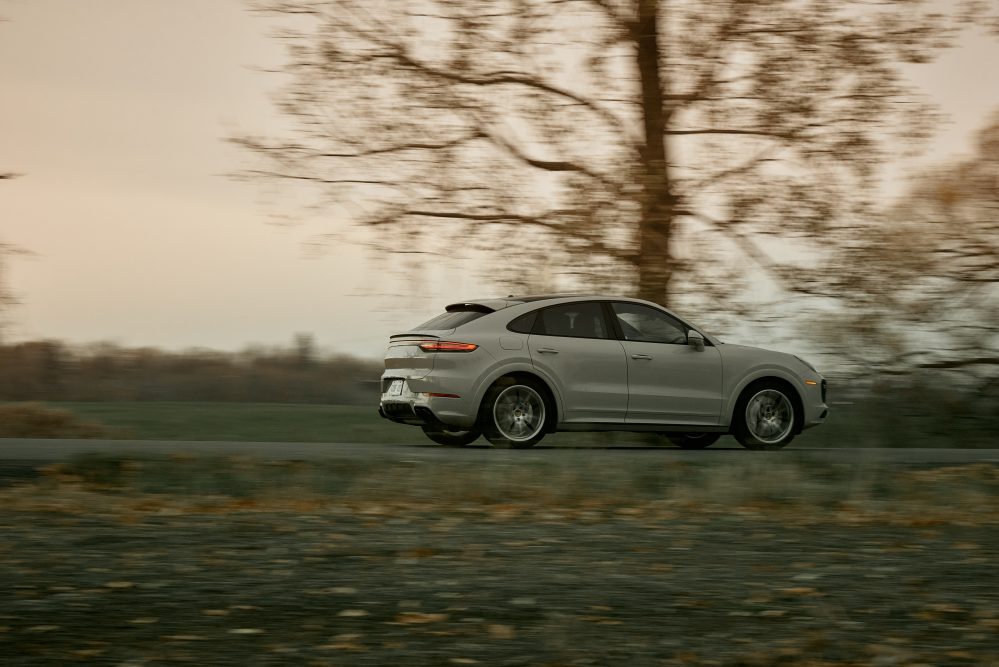 Perhaps what shines through in the way this 2021 Porsche Cayenne Turbo coupe attacks a winding road isn’t how blindingly quick and surprisingly agile it is. That, pretty much all the German brands can do nowadays. Where it shines, is its fanatical consistency and downright sickening build quality. There are just no faults here. The twin-turbo V8 picks up almost instantly as you hit the throttle. It also has a mean, throaty exhaust note which sounds like a WWII Messerschmitt fighter plane at full steam. There’s actual charisma and personality here, an irony given its clinical execution of performance. 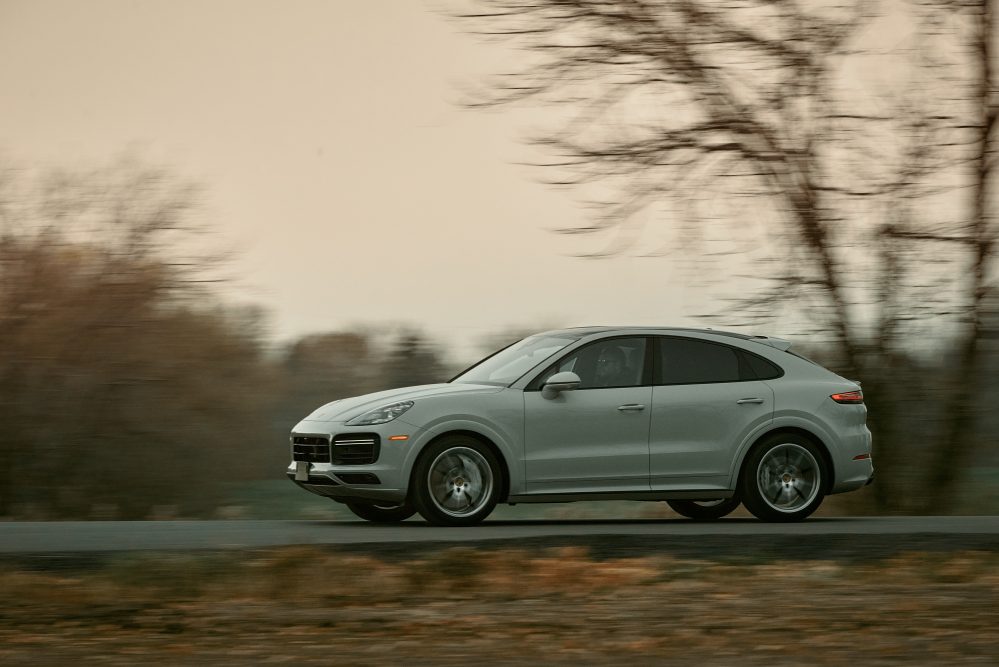 Everything is so linear, effective and downright, dare I say, perfect. I love how it dances on a tight back road as if it’s trying to be a Golf GTI, shrinking underneath you and feeling a lot lighter than it is. And I absolutely adore the suspension’s damping which somehow always works on garbage Quebec roads given its low profile tires. When it does deal with a pothole, the entire structure is so damn solid you’d swear it was made out of granite. 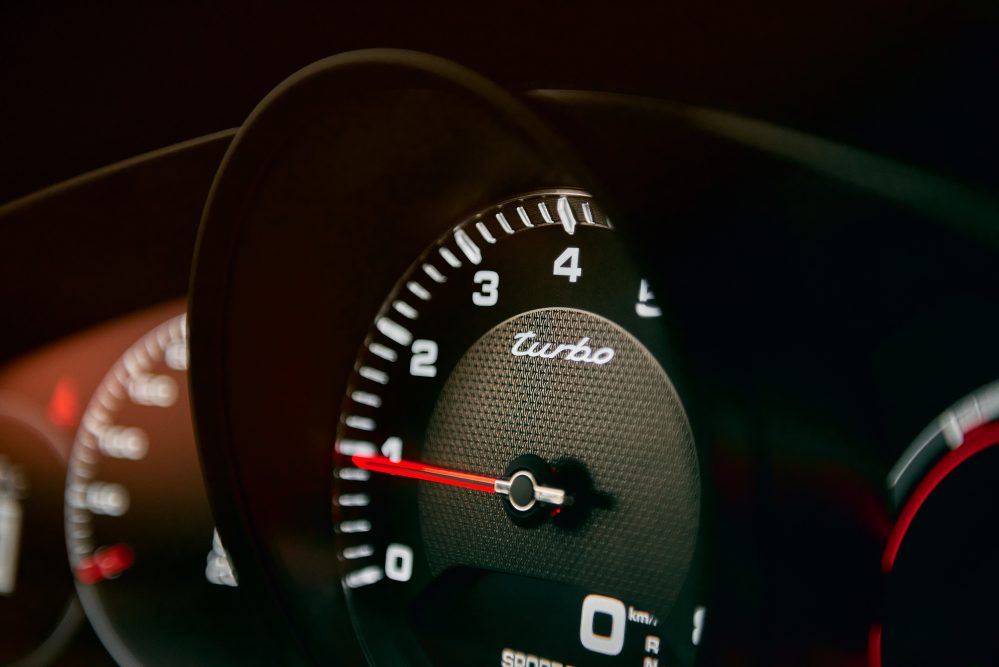 Meanwhile, the brakes will rip the skin off your face (not literally) if you dare send that middle pedal too far. And I’ve tasted some damn fine automatic transmissions in my life, but very few of them reacted in such a telepathic demeanor, almost predicting what I was about to do next. Oh, and did I mention the steering wheel? The steering wheel, folks. It feels like it was carved out by the driving gods. 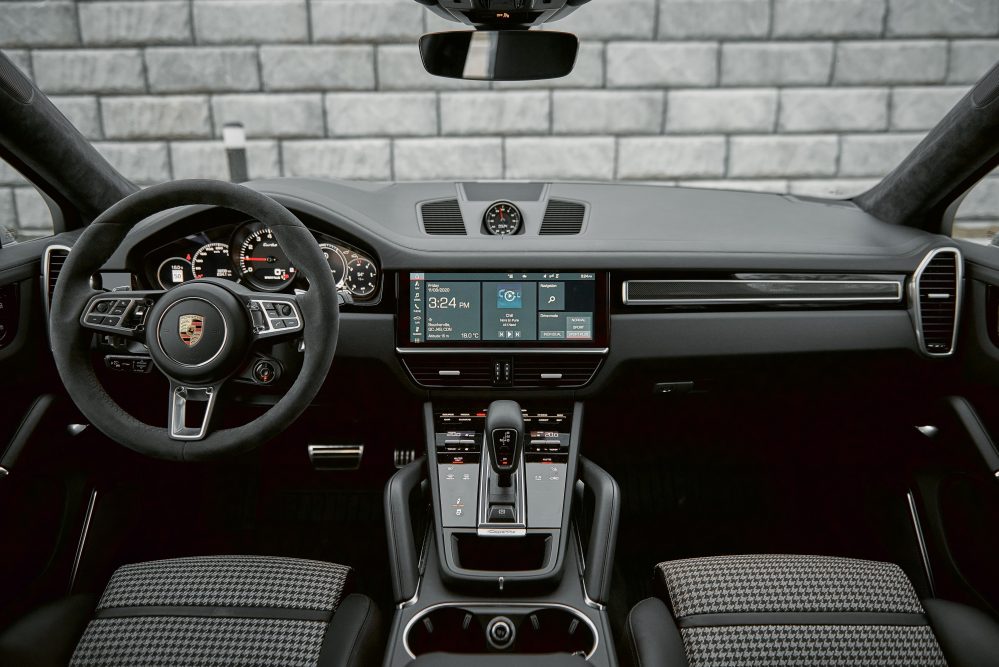 Inside, the perfection continues with a cabin that seems to have been taken straight out of an aircraft, with a beautiful choice of color combinations and luxury grade materials. I’m a sucker for flannel seats and the ones in this Cayenne look downright gorgeous. The large center console houses a full battalion of buttons which at first appear a little intimidating, but are actually quite easy to get used to. 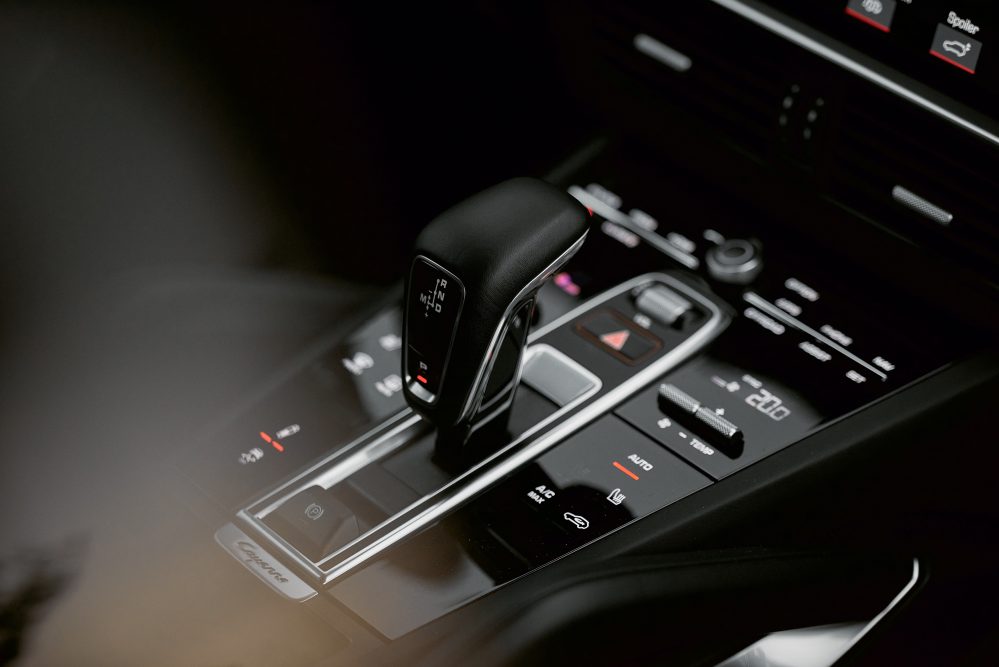 The Cayenne Turbo also doesn’t go down the full digital gauge cluster route like other German SUVs. While yes, the display is pretty much all screen now, there’s still an analog tachometer that was positioned in a way that you always know it’s there, even when the car is turned off at night. 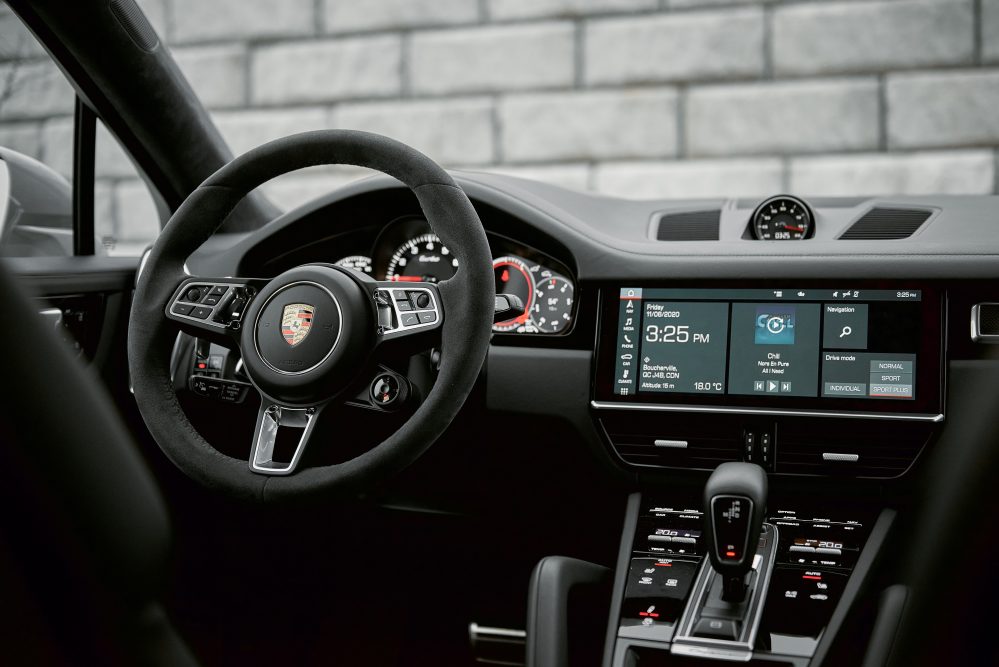 The Porsche PCM infotainment system is as intuitive and straight forward to use as the rest of the vehicle’s controls, but some features like the HVAC menu can prove a bit tedious at times. Luckily, the redundant physical controls are always there to quell this problem. And while I admire Porsche for letting you fully customize both the cluster and the infotainment system’s main menu, it feels like there’s just too much freedom here. Why would I want to display the clock three times? 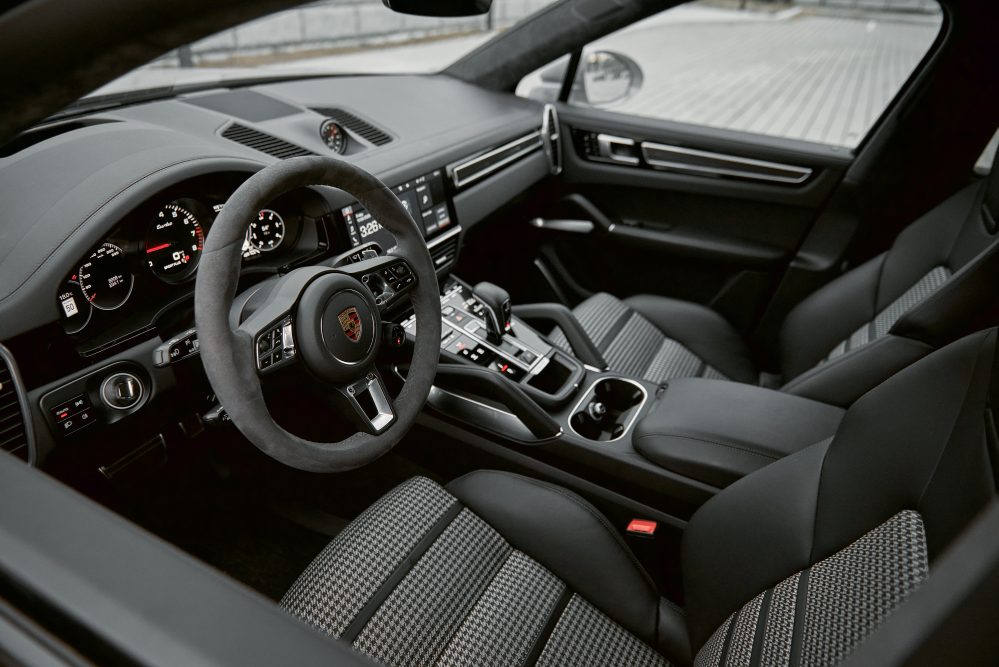 As for the SUV side of things, the Cayenne’s rear seat remains just as comfortable and spacious as its blockier brother. That’s because Porsche made sure to lower the coupe’s floor up to almost 20 mm in order to mitigate the slopping roof line. 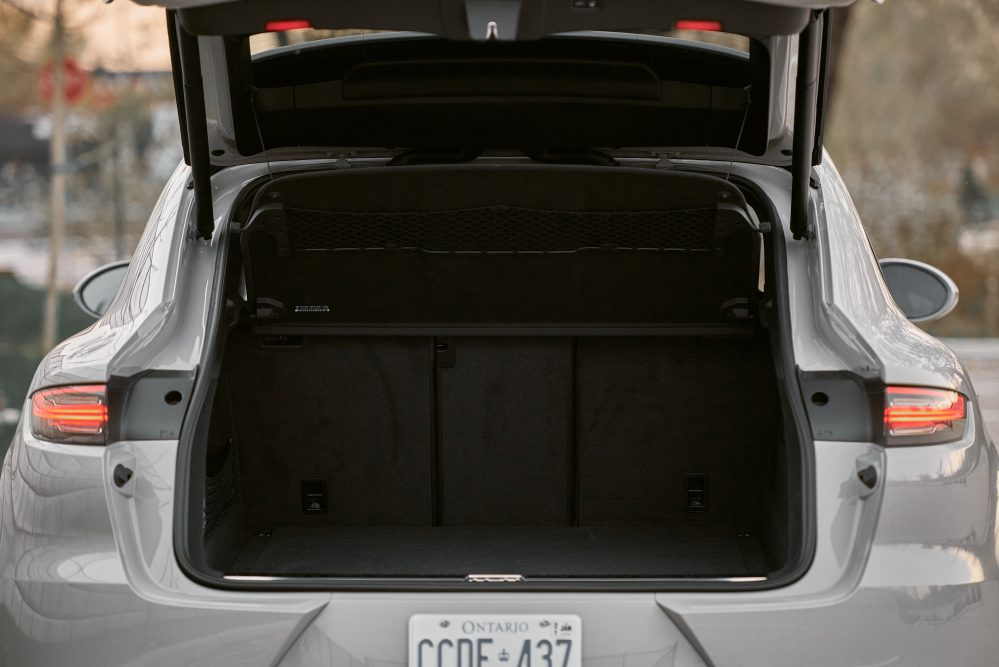 Inevitably, cargo space is sacrificed due this design, losing 169 liters for a 1,537-liter total capacity. This puts the Cayenne coupe at the back of the pack, lagging behind the Audi Q8 (1 718 liters), BMW X6 (1 687 liters) and Mercedes-Benz GLE coupe (1 718 liters). The good news, however, is that the Cayenne Turbo coupe can still tow up to 7,700 pounds which is enormous, comparable to some midsize trucks. 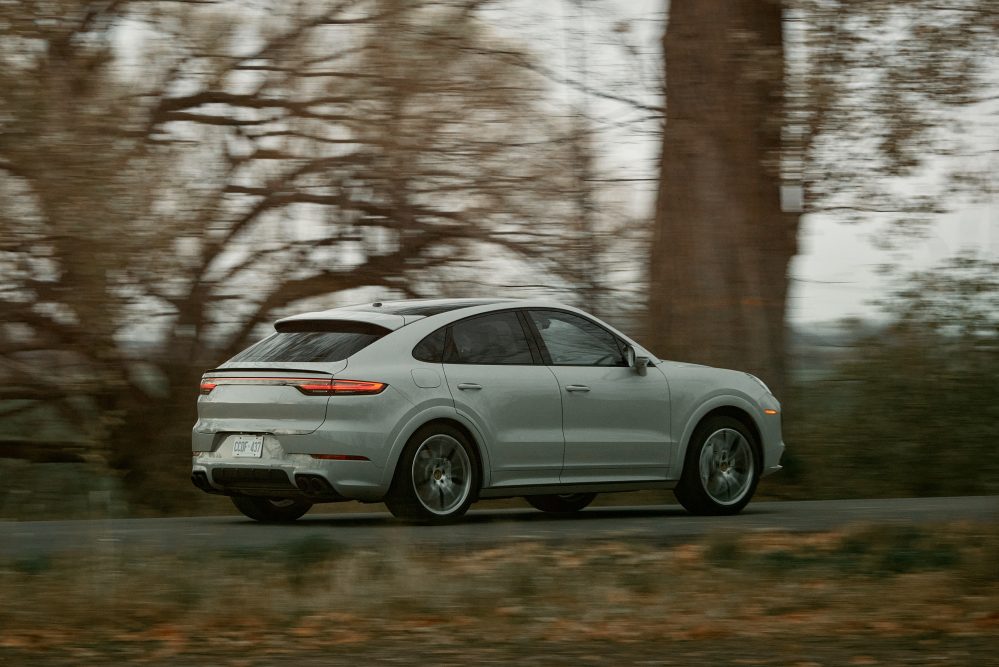 But except for somewhat limited cargo space and a ridiculously high price tag, the 2021 Porsche Cayenne coupe does everything better than anything else in this class. Yes, this is a stupid segment, one that shouldn’t even exist in the first place. But as ridiculous as it may seem, it’s a space Porsche dominates once again.