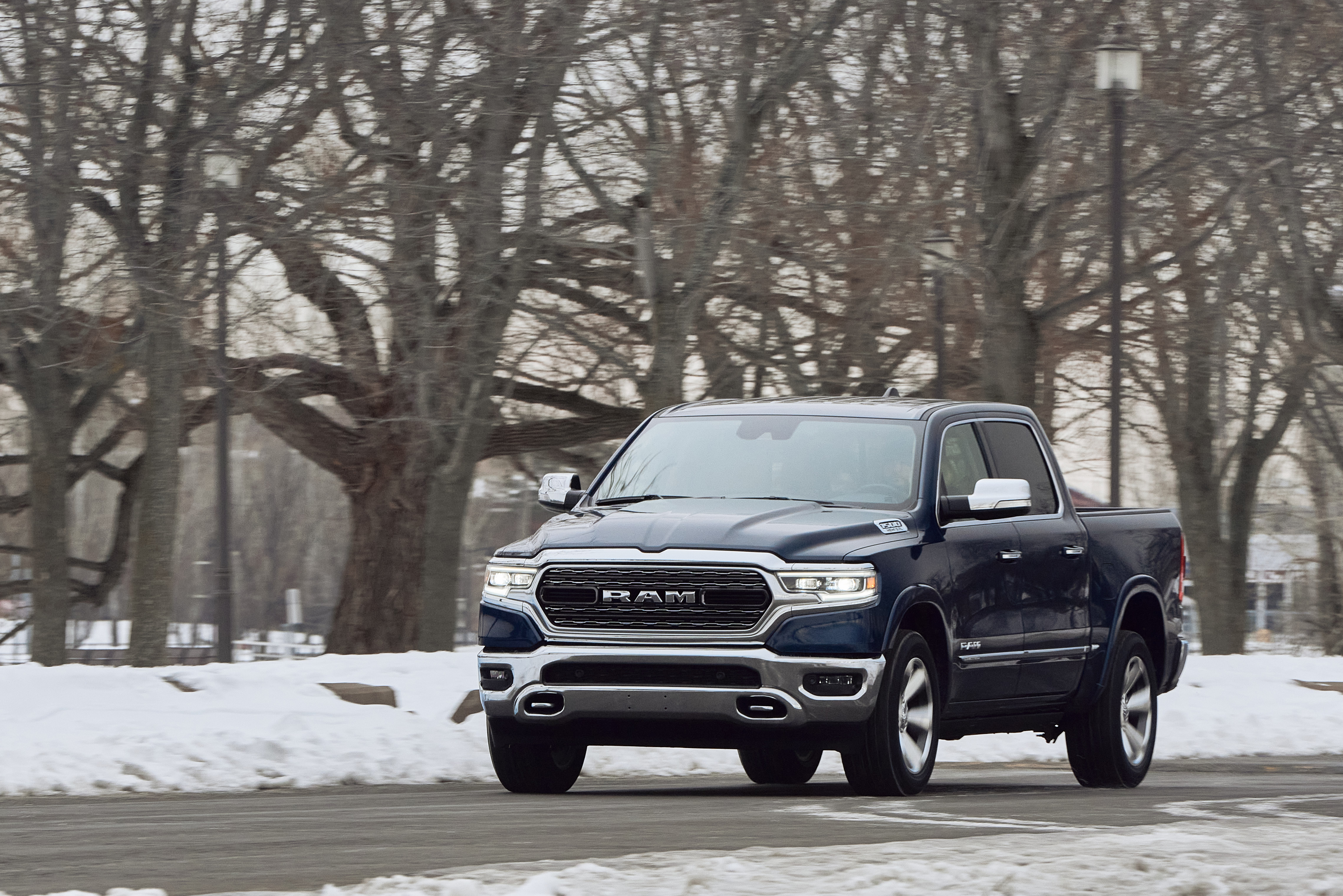 With the TRX and the Rebel now in the staple, the 2021 Ram 1500 lineup has now gone full circle, offering truck buyers a wide variety of variants to choose from. But with a new Ford F-150 in the ring, does the Ram still hold its own against Dearborn’s more sophisticated rig? Remember, there’s an unwritten rule in the world of trucks: when a new model comes out, it typically eclipses all the others. And in this case, the Ford is the newest and the Ram is the oldest. But that doesn’t prevent it from still being relevant. If anything, the arrival of a new F-150 reveals just how good the Ram 1500 is. 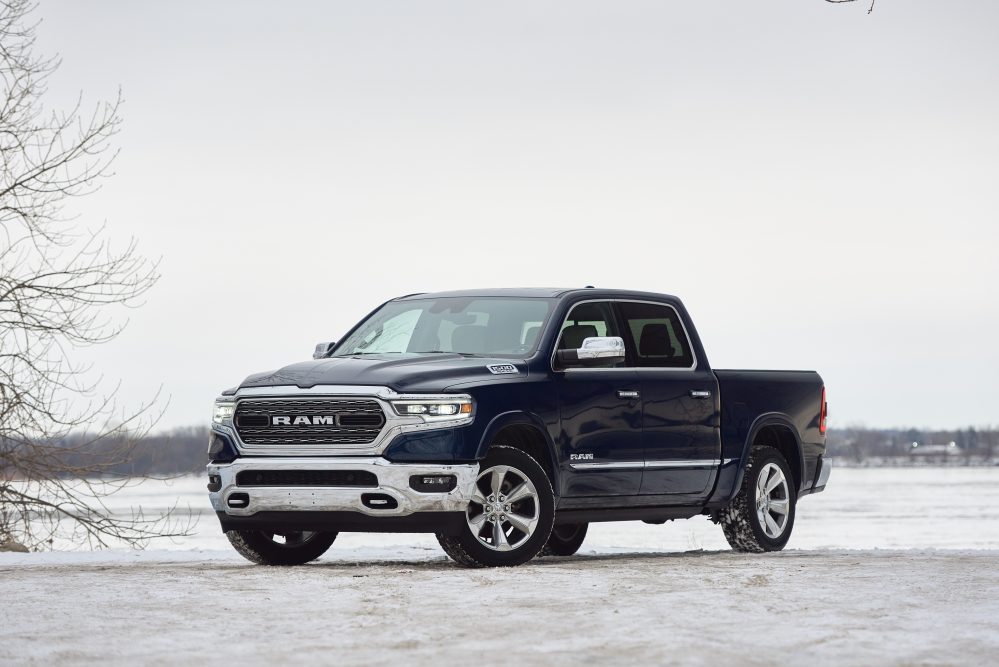 Of course, the Ram you see in these pictures is a fully loaded Limited model. It’s the kingpin of the 1500 lineup before entering TRX territory. Ram calls it the “most luxurious truck in its class”. Now while I’m not sure if that’s actually true (I mean, a Ford F-150 Limited is pretty fancy as well), I must say I was pleasantly impressed by the level of equipment and comfort found in this full-size American rig. 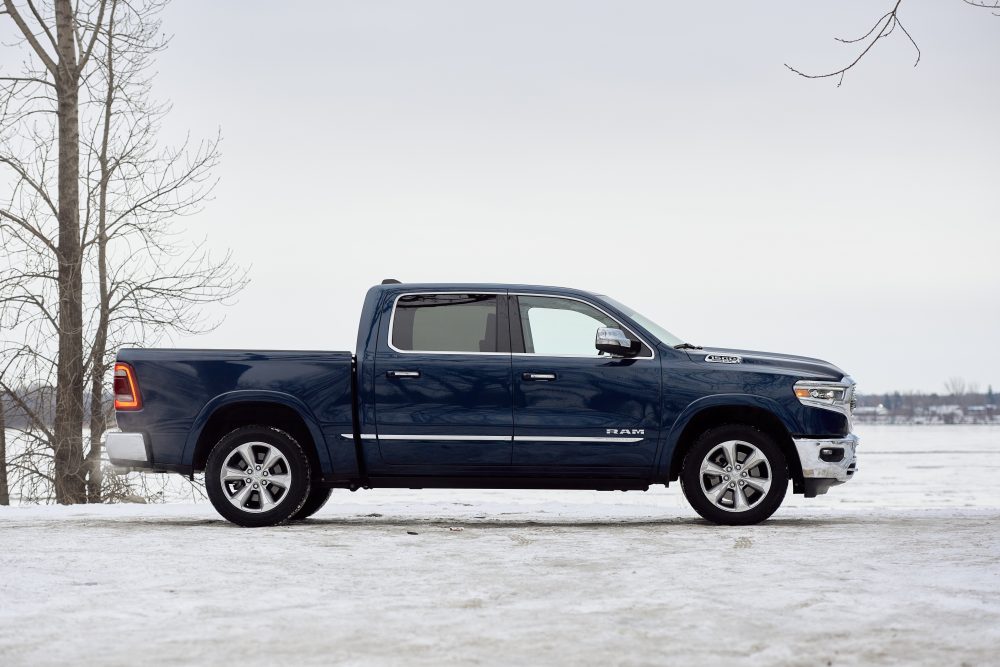 The Ram 1500’s mission remains very clear: do everything it can to lure potential truck buyers into a Ram showroom and have them sign for one instead of flocking over to a Ford or GM dealership. And in many ways, the Ram 1500 accomplishes that mission. When it was first introduced for the 2019 model year, it pulverized its rivals mainly because of its fancy interior and long list of available creature comforts. Oh, and it was also damn good at being a truck. Since then, however, both Ford and GM have released newer versions of their rigs, yet, they still can’t seem to match the Ram’s level of refinement. 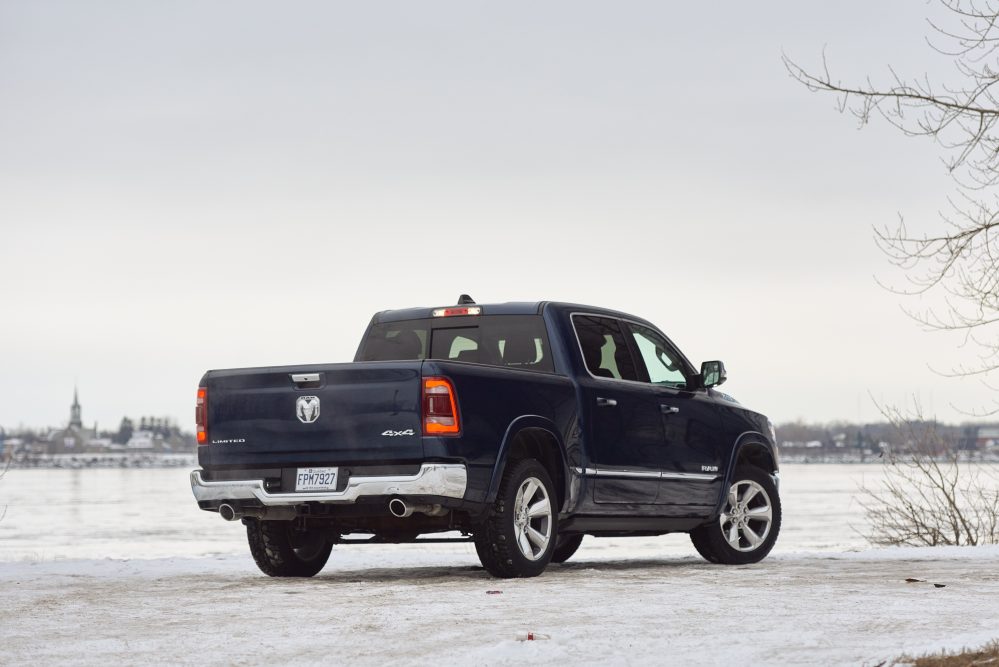 Like any good fullsize truck, the 2021 Ram 1500 comes with several engine options, but the default mill remains the tried and proven 5.7-liter HEMI pushrod V8. That’s what sat underneath the hood of my tester. Now with integrated mild hybrid technology, it’s not only more efficient than ever, but offers more power too, pumping out a combined output of 395 horsepower and 410 lb-ft of torque. It’s all mated an eight-speed automatic transmission. Max towing for a Ram 1500 is rated at 12,750 lb when properly spec’d. 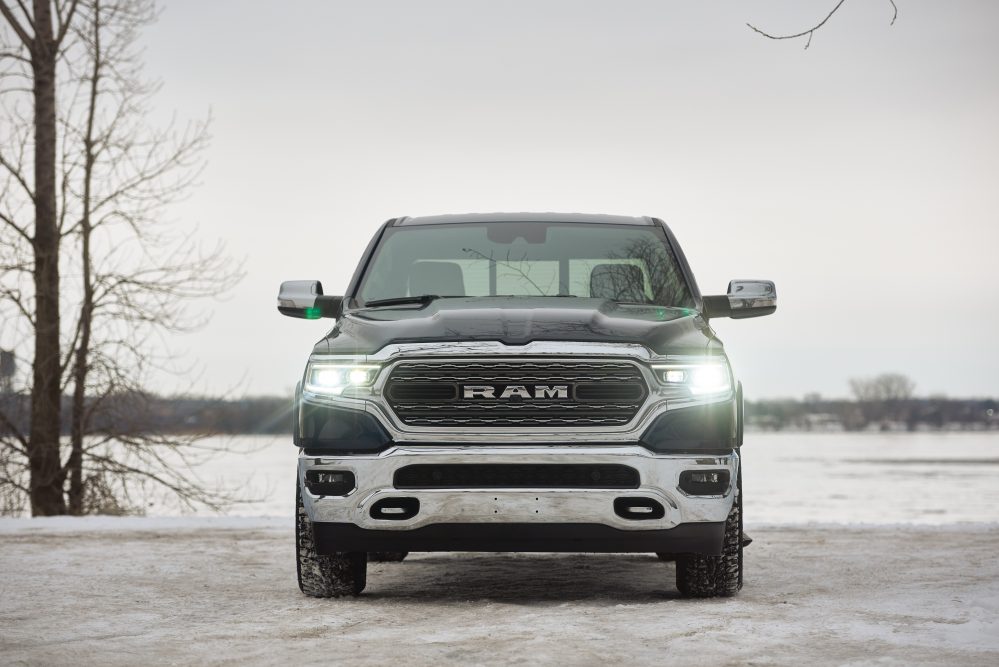 Being a Limited, with all the chrome, air suspension and fancy cabin amenities, meant my truck was extremely expensive. The model kicks off at a whopping $76,645. Mine had a few options piled on, as well as the $3,995 Level 1 Limited package. It yields a bunch of safety technology and a 19-speaker (yes 19!) Harman Kardon sound system. The final sticker for the truck you see here was $85,265. This, by the way, illustrates how much more expensive Ram’s options are compared to the competition. 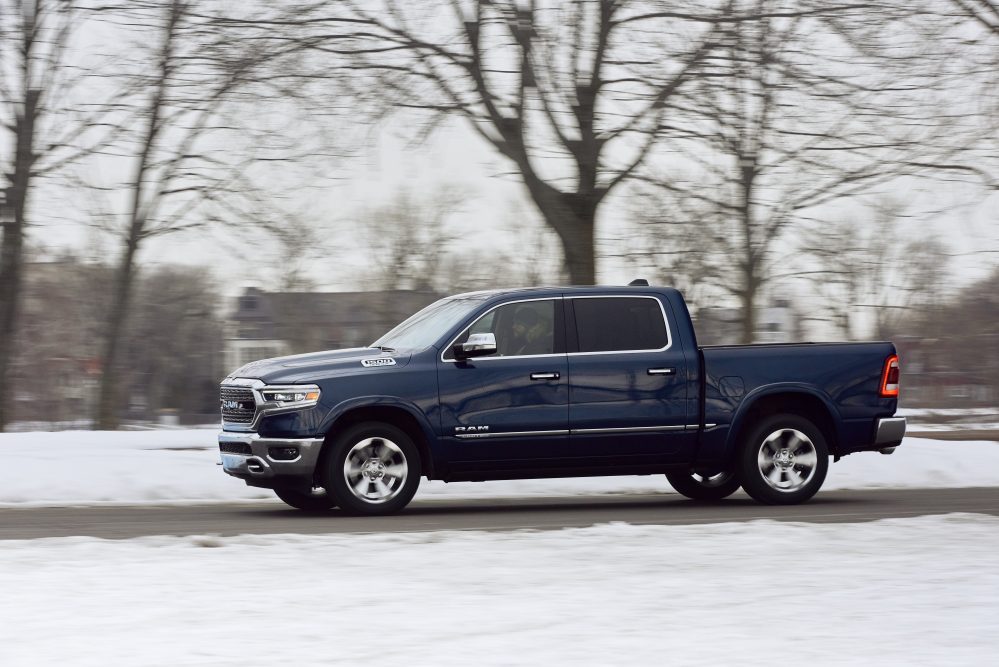 I’m not the only one who says it: the 2021 Ram 1500 is the smoothest-riding truck in its class, and a lot of it has to do with the optional air suspension, which constantly regulates the truck’s ride height according to its settings. But even when I had driven the Rebel with the standard dampers or heck, even the dune-conquering TRX, the Ram came through as the more refined truck of the bunch. There’s solid body control here and a highly composed ride. It also steers competently, which makes it easy to drive fast or maneuver its way through traffic. 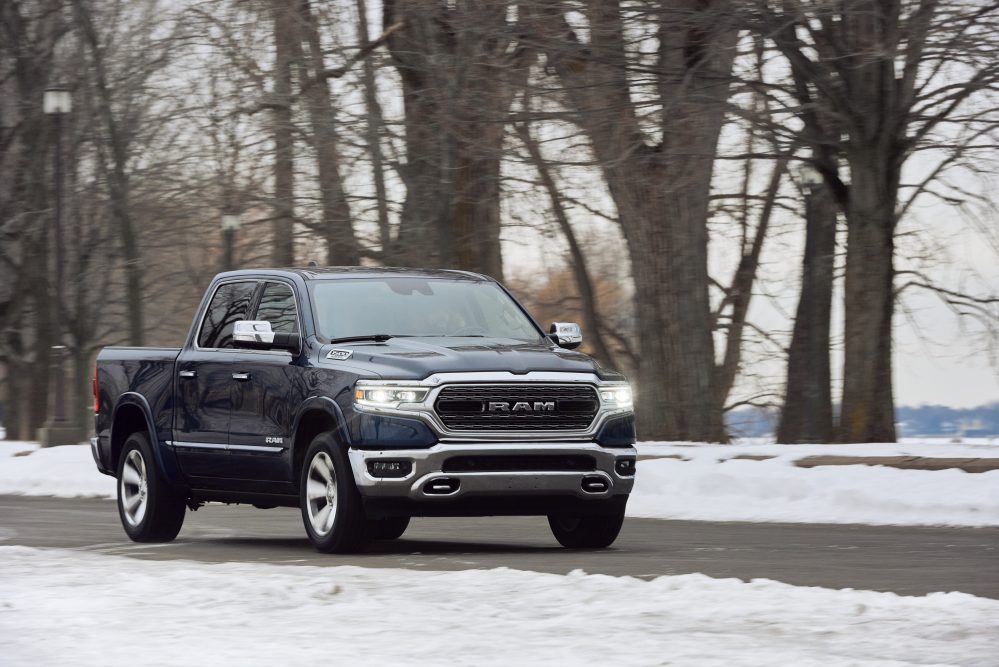 On broken winter roads, this big guy simply glides over everything, insulating its driver and passenger in a highly cocooned cabin that’ll put many luxury sedans to shame. The HEMI V8 also remains a peach to operate. Next to Ford’s laggy turbocharged setup or GM’s crude, yet rock-solid 5.3-liter V8, Ram’s unit has quick throttle response, pulls with urgency and sounds like a muscle car at full throttle. In other words, even if it’s showing age, it still gets the job done. And with mild hybrid technology, it simply ups the ante in terms of the smoothness of its operation. 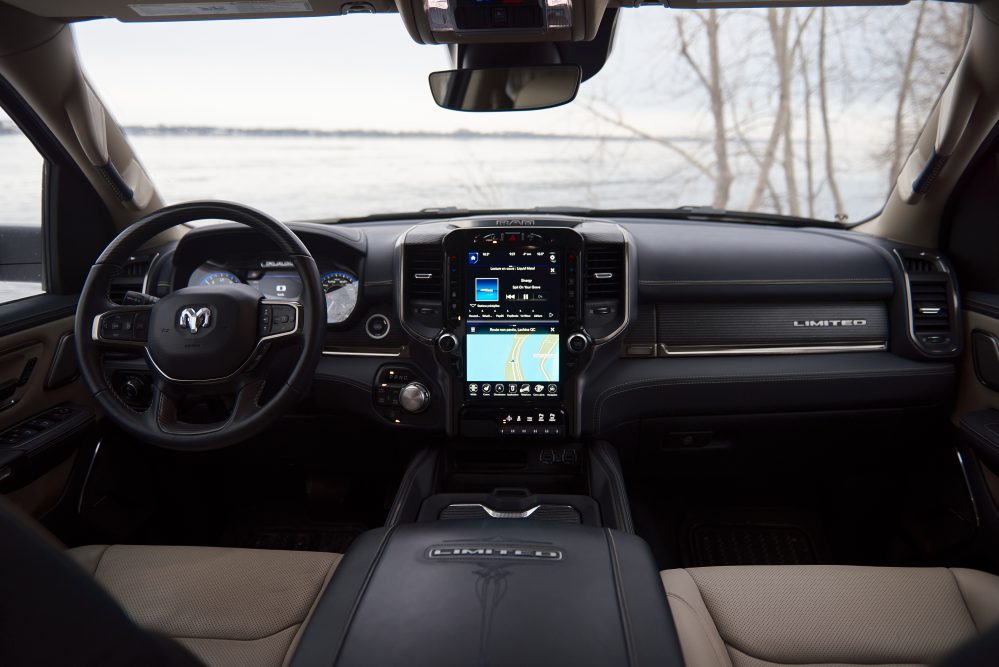 Inside, the Ram 1500 Limited greats you with fancy cabin materials, above average build quality and room for an entire family and its gear. The massive 12-inch vertical infotainment screen remains striking and highly effective, but next to Ford’s updated horizontal setup, it’s beginning to feel and look a little clumsy. While UConnect 3 remains user friendly and easy to comprehend, Stellantis’ UConnect 4 interface is beginning to creep its way into more recent models. 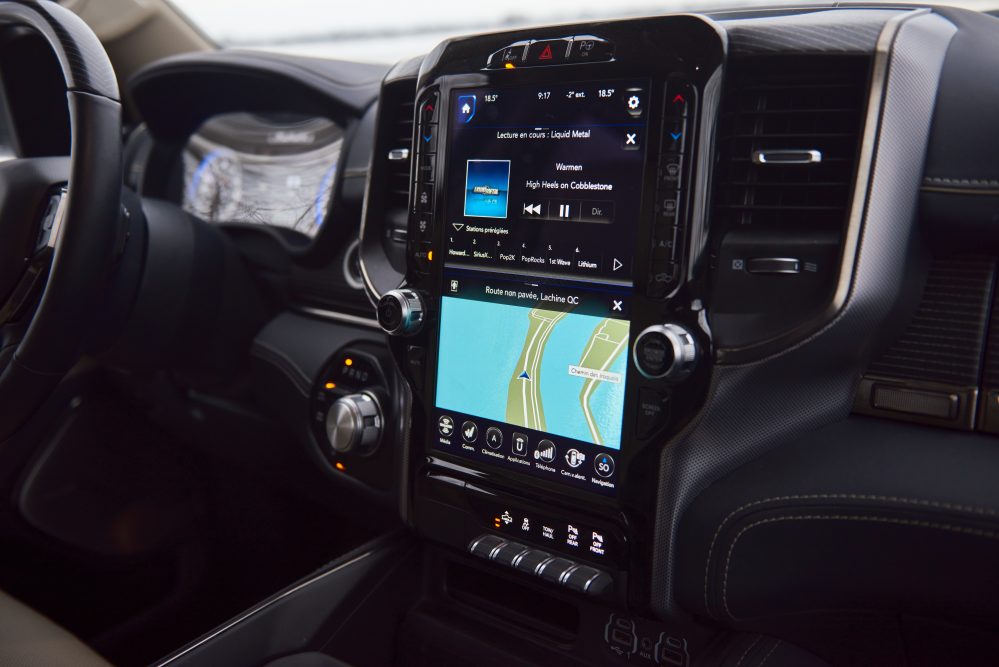 Perhaps this screen’s biggest caveat remains its touch intensive controls. It’s a lot to take in at first and perhaps Ram could have left a few physical buttons to play with. During a cold winter’s day, when wearing gloves, HVAC and heated seats/steering wheel controls will require you to remove them and expose your hands to the cold. The system also lags heavily at times. Meanwhile, the massive multifunction center console remains a nice place to throw your gear. The the fact that there’s no gear level for the transmission gives way to more storage space than you would ever  need. 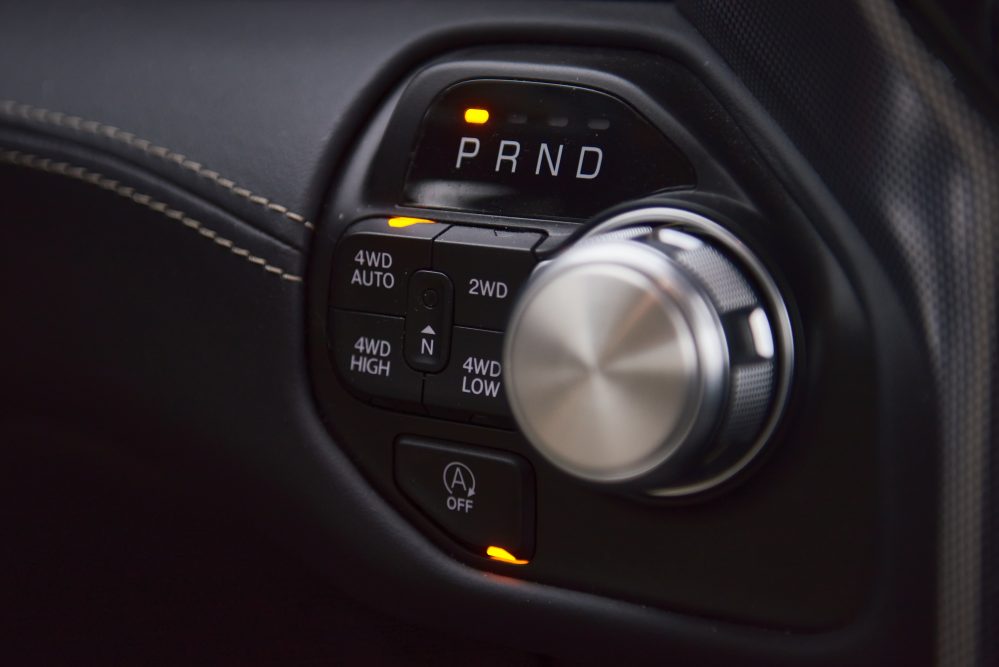 In Limited trim, this rig gets fancy leather seats and upgraded materials around its dashboard and door inserts. There’s a nice integration of the ranch theme here, but not so much as to copy Ford’s King Ranch package. Ram fools the eye into making you believe textures are of higher quality then they actually are. At times, this works; you’d swear the passenger section of the dashboard is covered in an actual jean-like texture. But when you touch it, it’s merely a plastic cover tapered in an attractive vinyl. 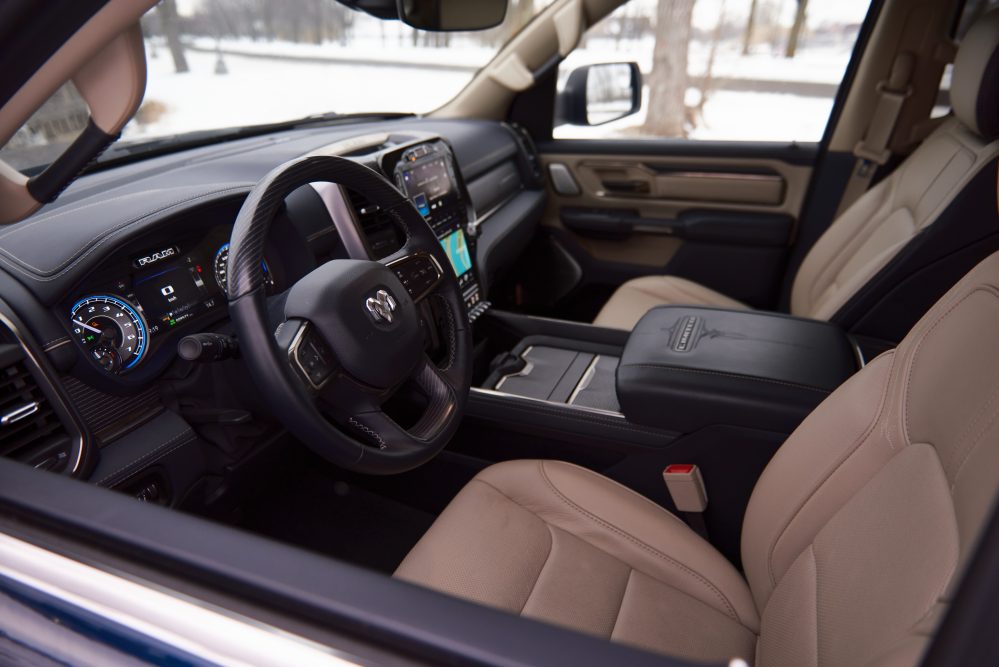 There is, however, massive rear head and leg room and enough comfort and amenities here for a modern family to live in it year-round. And the level of quality and craftmanship will definitely humiliate a Chevrolet Silverado High Country. While I’m not convinced a Limited model has any relevancy in the truck world due to its chrome-intensive, leather wrapped attire, the fact that Ram offers so many different unique flavors of the thing is a testament of its understanding of truck buyers. 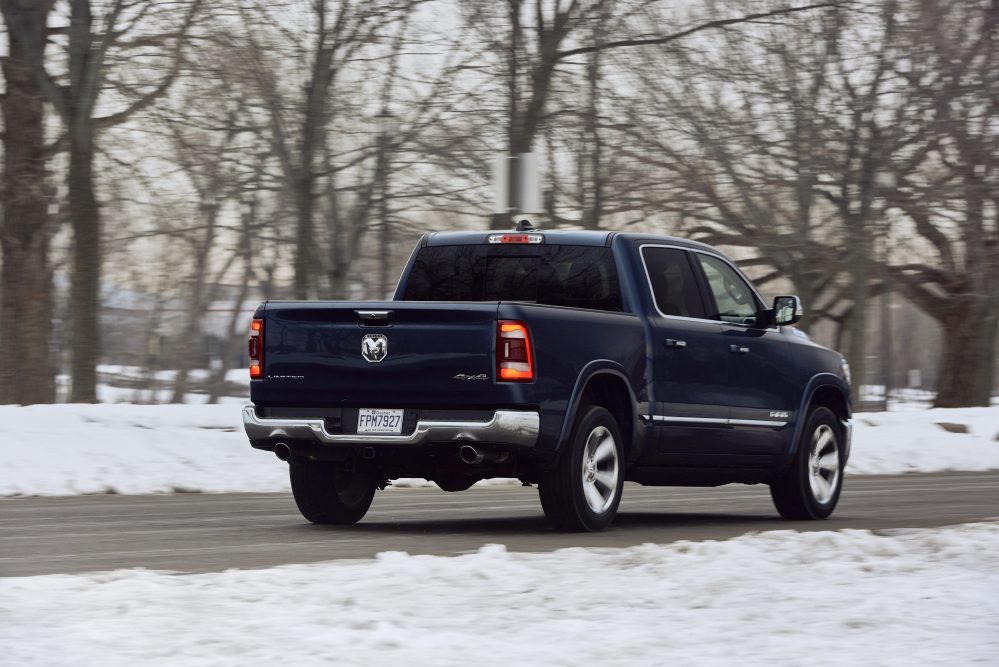 While a Ford will offer more modern technology, like a more convincing hybrid powerplant and a built-in generator, it’s hard to get past the 2021 Ram 1500’s upscale levels of refinement, smooth and composed handling, and punchy naturally aspirated V8. Or, and if that’s not enough, perhaps the 700-horsepower TRX has what it takes to quench your thirst?