2017 Subaru Impreza: Base Says It All 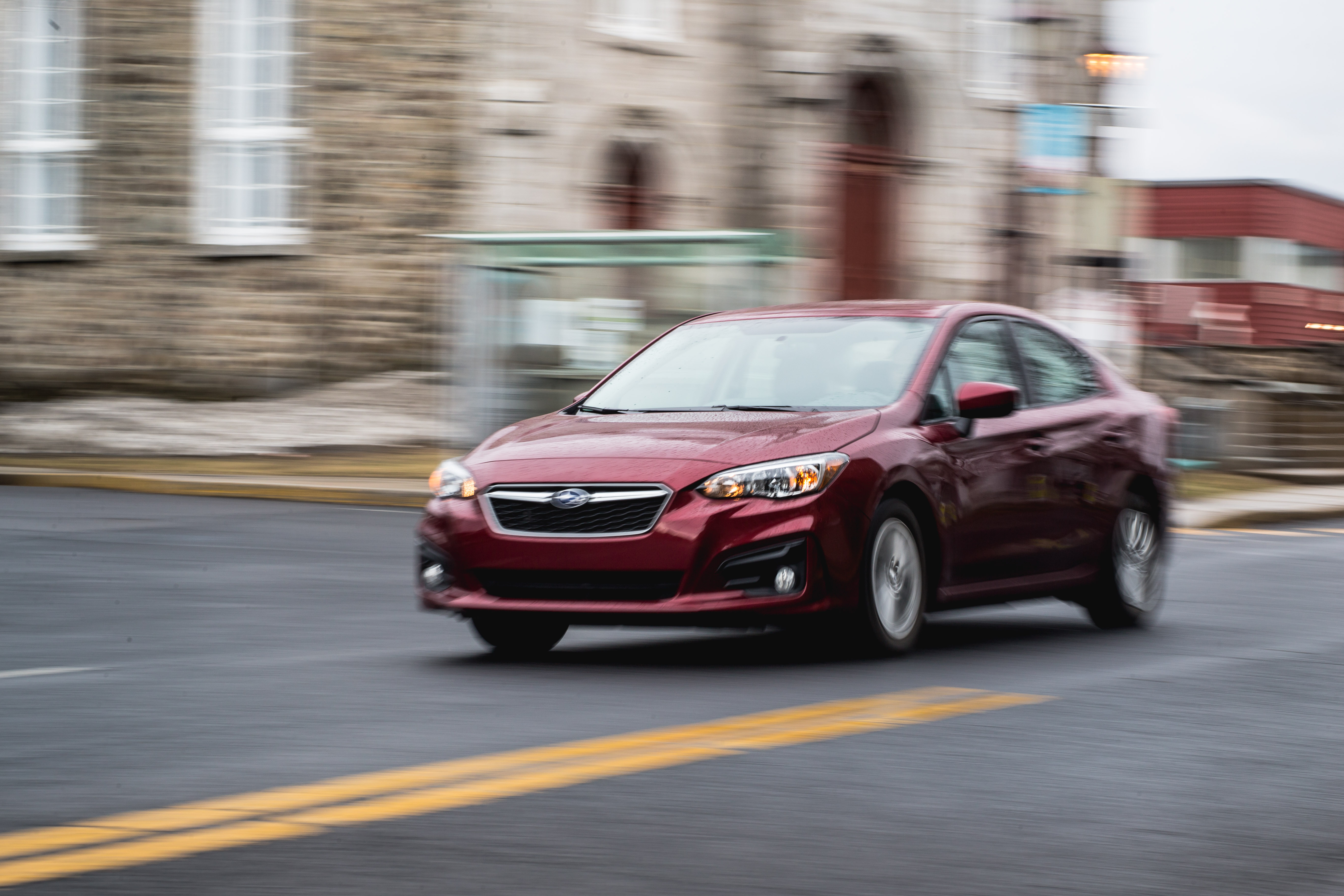 We auto journalists are a spoiled bunch. Typically, when a carmaker lends us a press car, it’s the top-of-the-range model, filled with all the latest bells and whistles, fancy wheels and stunning paint jobs. The goal, of course, is to make sure the car looks its best for media purposes, and possibly to guarantee our butts are sitting on top of the finest leathers so we give the car a positive review.

Sorry, but that’s not how I roll.

The reality is that the best way to know if a car is any good is to sample its most basic, stripped-down version. Usually, if that model impresses, it’s a sign that the entire lineup will kick solid ass, as I discovered with the Honda Civic hatch. In the 2017 Subaru Impreza’s case, things are a smidge more important, as the base model will be responsible for setting the pace for the upcoming WRX and STI sports cars. So Subaru is under a bit more pressure than most. 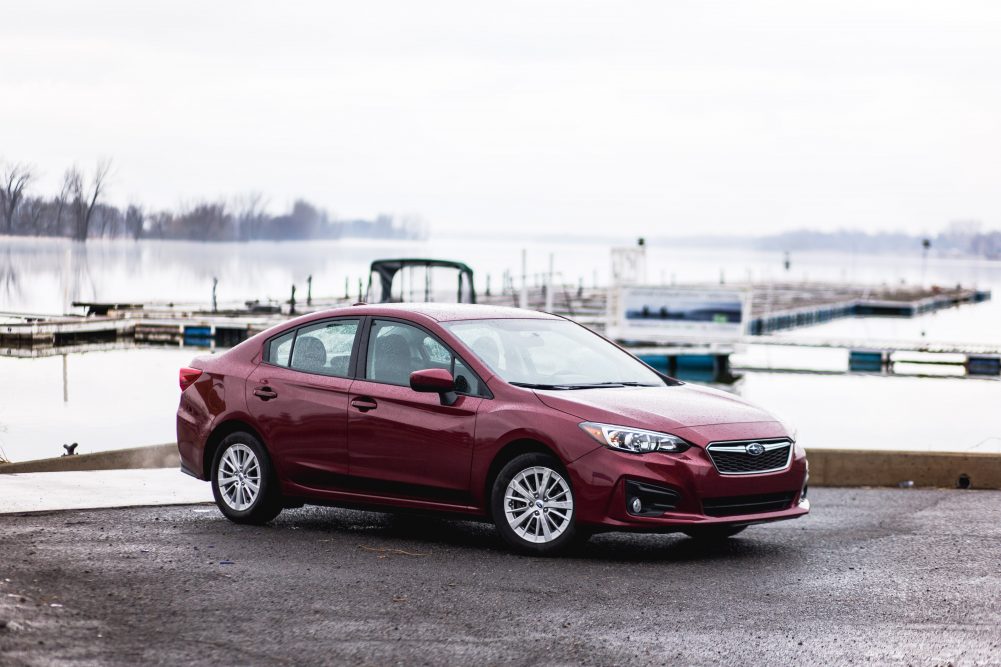 Actually, I sort of lied up there. The model you see here isn’t the base Impreza, but the Touring, the version that sits just over base.

According to Subaru Canada, Touring is the version most people will actually buy. While all 2017 Imprezas now come standard with convenience features we take for granted in small cars now, such as Apple CarPlay and Android Auto compatibility (finally!), the Touring trim adds a few extra goodies such as alloy wheels, fog lights, a leather-wrapped steering wheel and shifter (wow!), a larger touch screen for the infotainment system, active grille shutters to improve fuel economy, and automatic climate control. Great.

But there’s actually more to this new Impreza than the absence of roll-down windows. 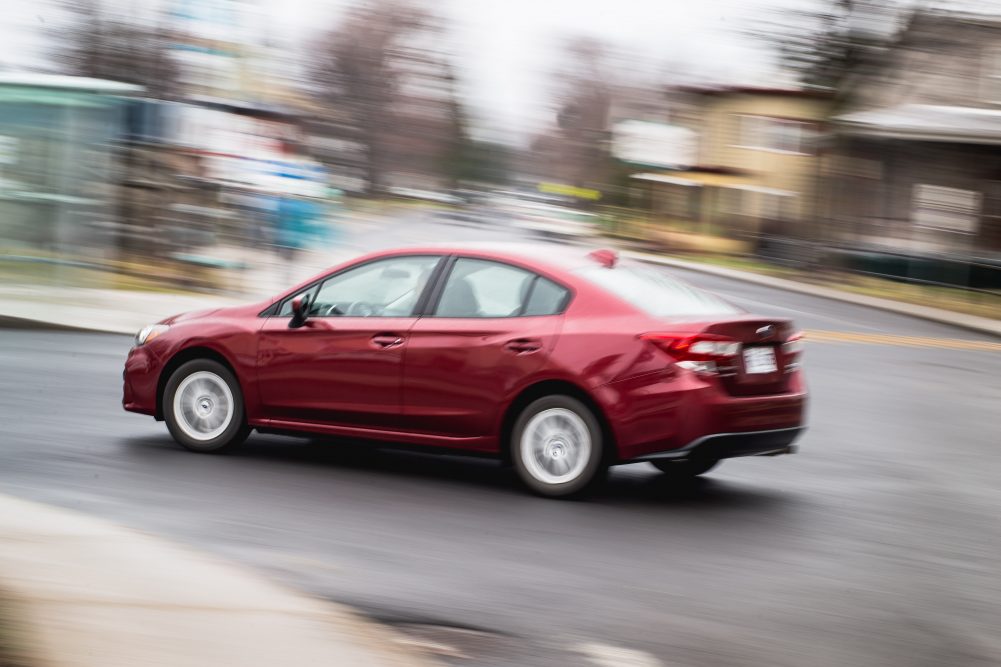 You see, Subaru’s been on quite a roll lately, with steadily increasing sales for all of its core vehicles across North America. So it’s only fitting that the profits collected from this growth be put to good use. The 2017 Impreza is Subaru’s most important investment, which is why it inherits the brand’s all new Global Platform built at its US-based Indiana assembly line.

Subaru claims their updated compact is 95 percent new, with the focus being put specifically on chassis rigidity, ride quality, sound insulation, and safety. Notable chassis upgrades are a super rigid firewall, curved skeletal cross-members integrated into the car’s floor and stronger suspension subframes, all for the purpose of preserving your pretty face in the event of a crash. 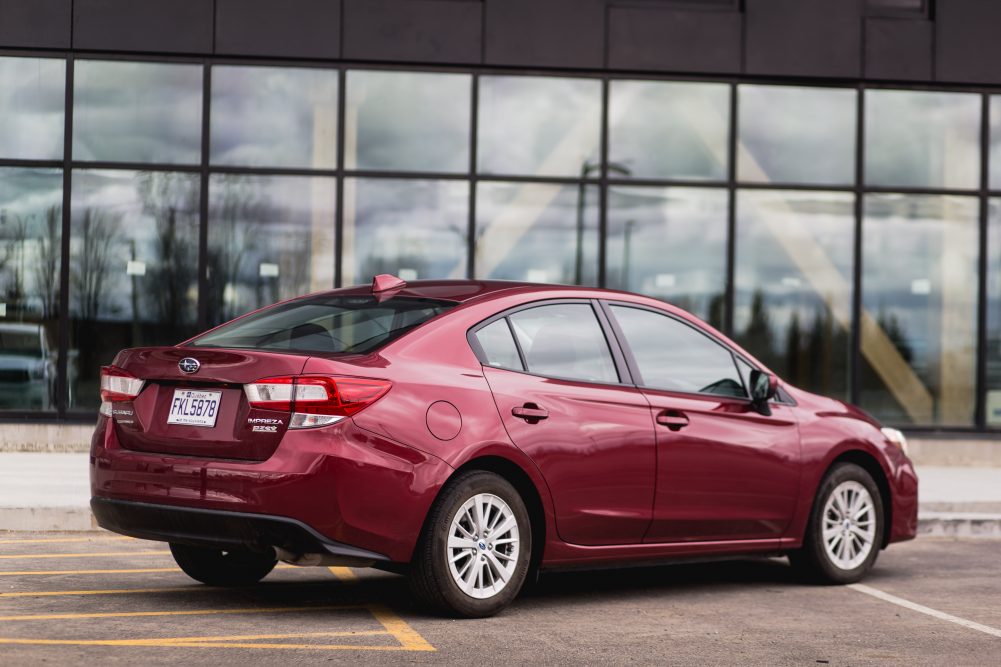 Other important changes include the return of the beloved hatchback, and a sleeker, more, ahem, “handsome” overall design. Personally, I’ve been having some difficulty grasping Subaru’s styling of late. Ever since the ghastly bug-eye model was released, I’ve always suspected Subaru designers of having an awful sex life. But this new version finally works towards the right direction by being more coherent all around, and at least appearing somewhat sporty and upscale. Sadly, that new styling only works when the car is dressed up with options; in this base trim, especially in sedan form, the Impreza looks sort of dinky, especially with those tiny wheels.

The Little Boxer That Could 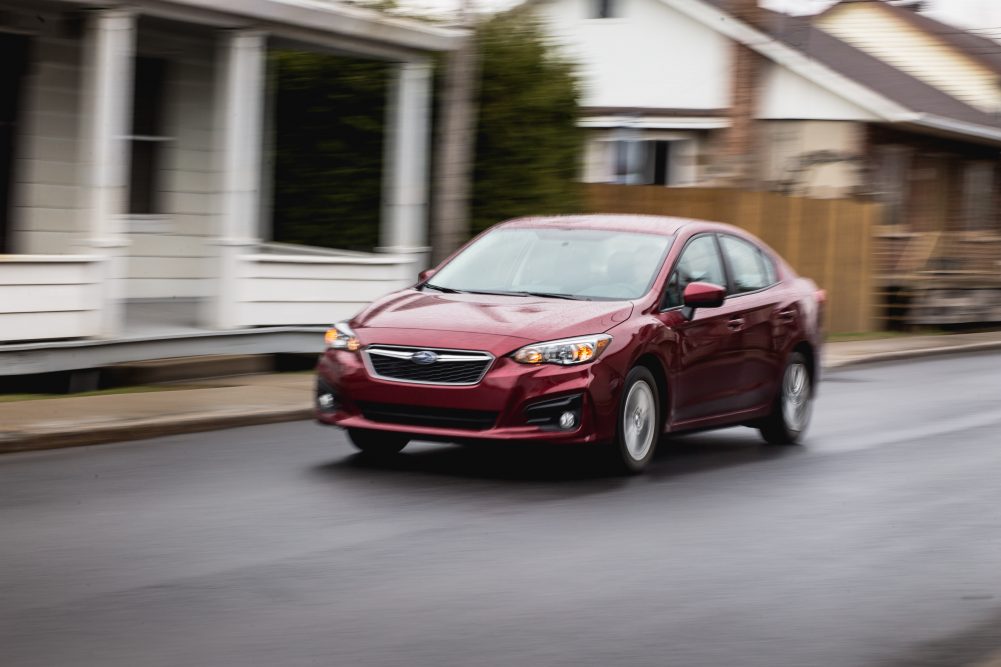 Under the hood of the 2017 Impreza sits an all new boxer, flat-four engine – go figure. Still spec’d at 2.0-liters of displacement, it’s essentially a heavily revised version of the one I sampled in the Crosstrek I reviewed this winter. It now comes with a lofty 12.5:1 compression ratio, which, sadly, doesn’t really do much in terms of performance. Subaru claims 152 horsepower and 145 lb-ft of torque. That’s a four horsepower bump over the old engine. Four!

And torque remains the same –urgh. 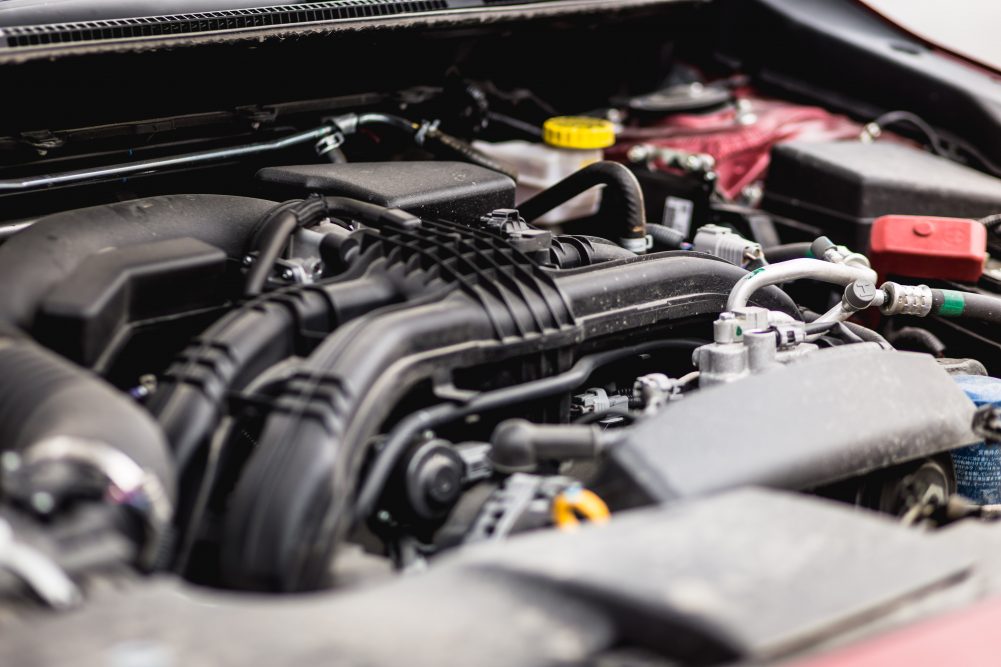 Behind the wheel, acceleration is, as expected, anemic. Since this is, as with all Subarus, an all-wheel-drive vehicle, the power-to-weight ratio isn’t exactly up there. You really need to hustle this little four-banger around for the car to actually go. Luckily, it eats up revs quite a bit better than its predecessor, so it responds well to good-old fashion hooning.

But then, it doesn’t. My tester was fitted with Subaru’s continuously variable transmission, which, to Subaru’s credit, remains one of the best in the business thanks to a step-gear simulation program that actually does a great job of keeping the revs in the meat of this little mill’s power band. But its infuriating drone makes your ears bleed and discourages you from taking part in any sort of spirited driving. You’ll end up driving very slowly in your Impreza. 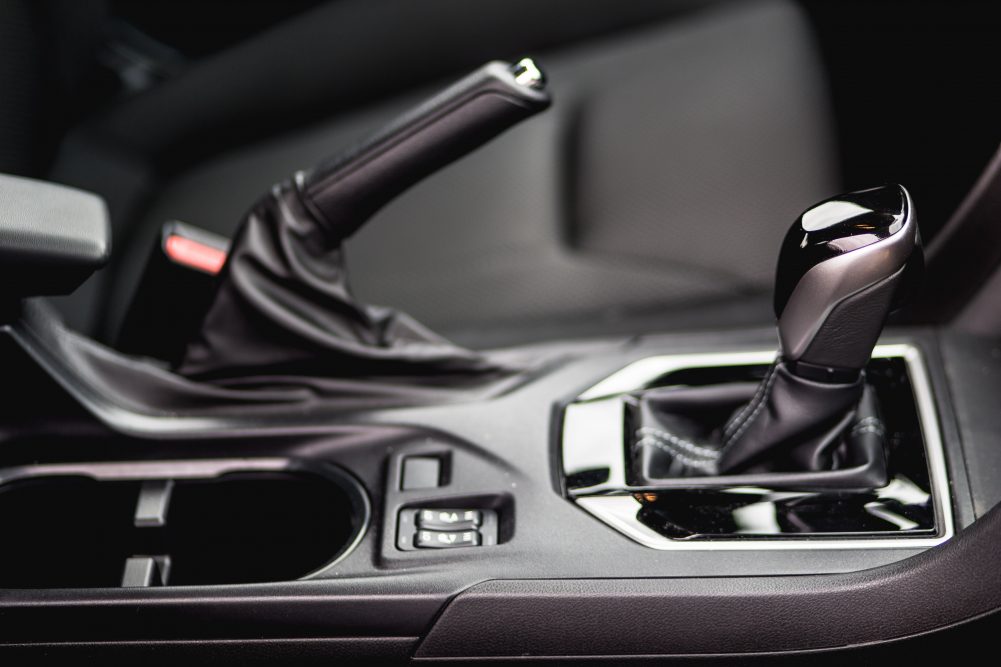 Anyway, if you dare to floor it, you won’t go anywhere fast. Acceleration to 100 km/h, according to Subaru, will take you a whopping 8.9 seconds. That’s very slow by modern standards. To put things into perspective, a base Mazda 3, with the 2.0-liter engine and the automatic, does it in 7.6 seconds. Luckily, a five-speed manual is available in the Impreza. I’d recommend going for the stick – as I always do.

I am impressed by how quiet this new engine is though. Or is this due to the improved insulation? The new boxer still emits a somewhat harsh chugging noise on cold starts, but sounds nowhere near as broken as Subaru engines of yore. Once warmed up, it has a pleasant intake rasp to it, and is surprisingly smooth and refined, sounding more-or-less like a conventional inline four. So good work on that Subaru.

No Longer For The Kids 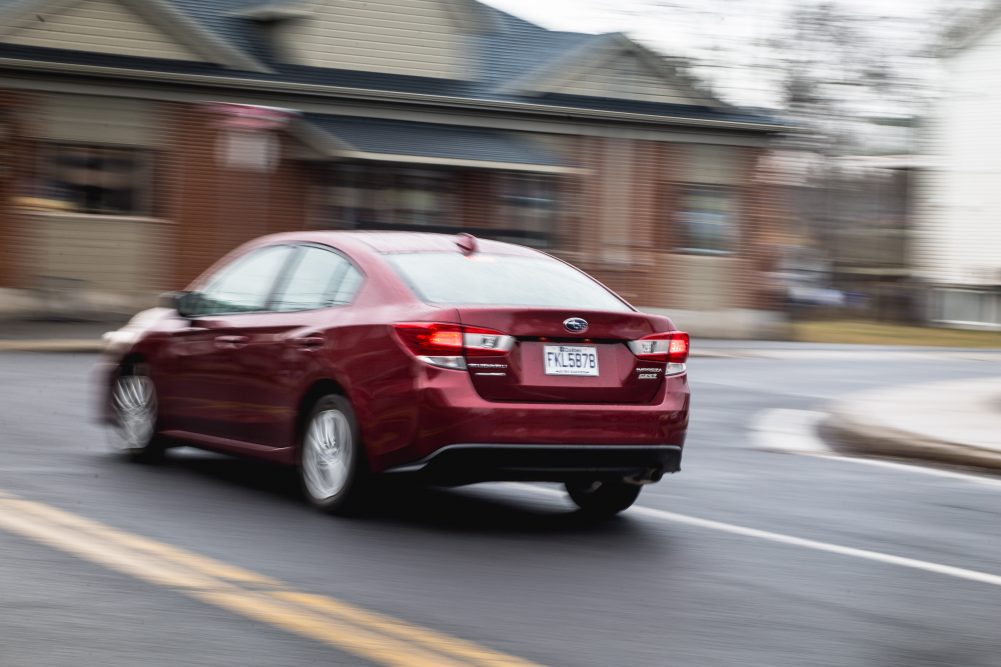 Subaru says it wants to move away from its gold-wheeled, hood scoop, big wing past and aims at up-marketing the car. It claims the Impreza is more of a cut-price Audi rather than an all-wheel-drive rival to a Honda Civic – then again, the Civic drives like an Audi A3 now, so it only makes sense for Subaru to claim this. 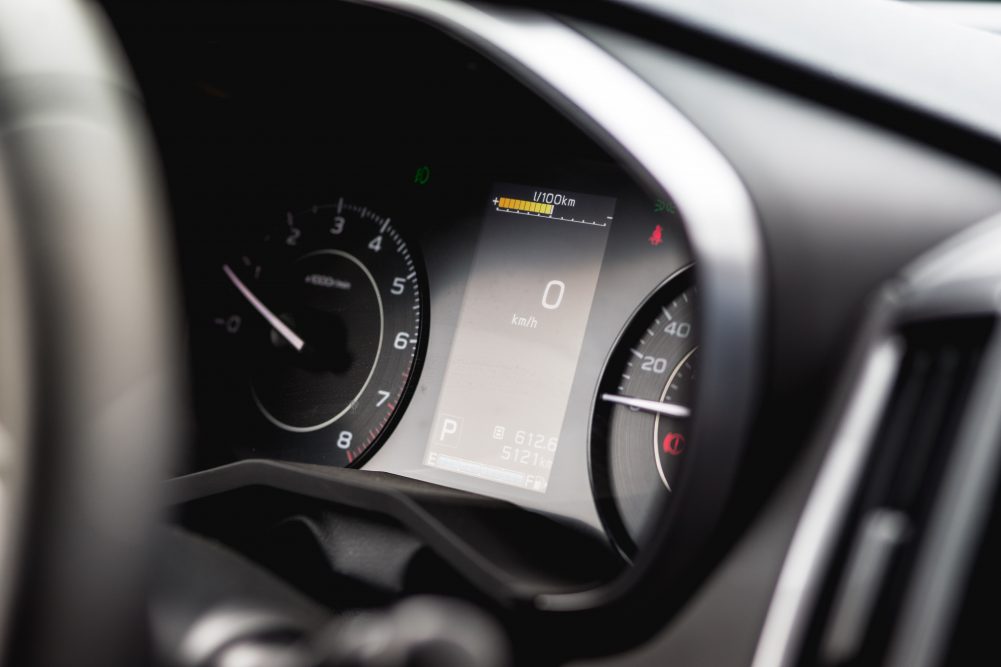 To be fair though, the Impreza’s interior has been drastically remodeled and textured, so it no longer feels flimsy and bargain-basement in there. Where past Subarus were plagued with mundane dashboard designs and hard cheap plastics, this Impreza now features an elegant, modern, and very well put together cabin, even in a base trim level like my tester. Pretty much all surfaces you can touch are soft. There are neat design cues added on the dashboard and door inserts as well as fake carbon fibre. It looks young and fresh. The steering wheel also looks and feels sporty while being enjoyable to grab. Subaru’s revised infotainment system remains quick to react, and thanks to large, well-identified icons, is also easy to learn and get around. 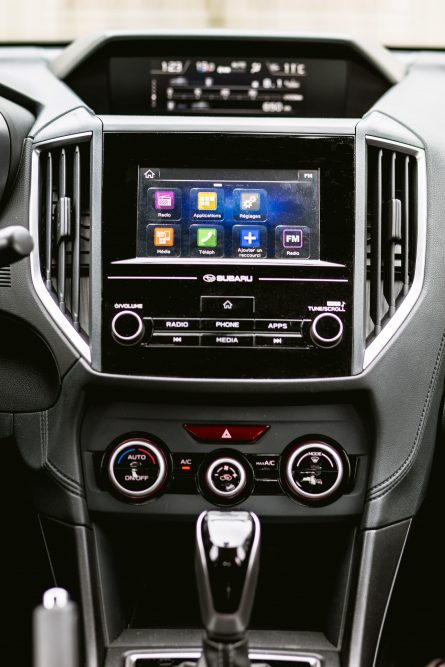 A second screen sits on top of the center stack, very similar to what you’ll find in the Forester. It takes care of presenting fuel consumption ratings, all-wheel-drive monitoring and other trip data. Although useful, the interface is somewhat too Japanese-manga for my tastes with an excessive use of digital fonts, lines, angular shapes, and animations.

The only thing missing from that screen is a Japanese-style exclamation when turning on the car: “Go driving hard now with plenty of fun in today’s sunshine!” 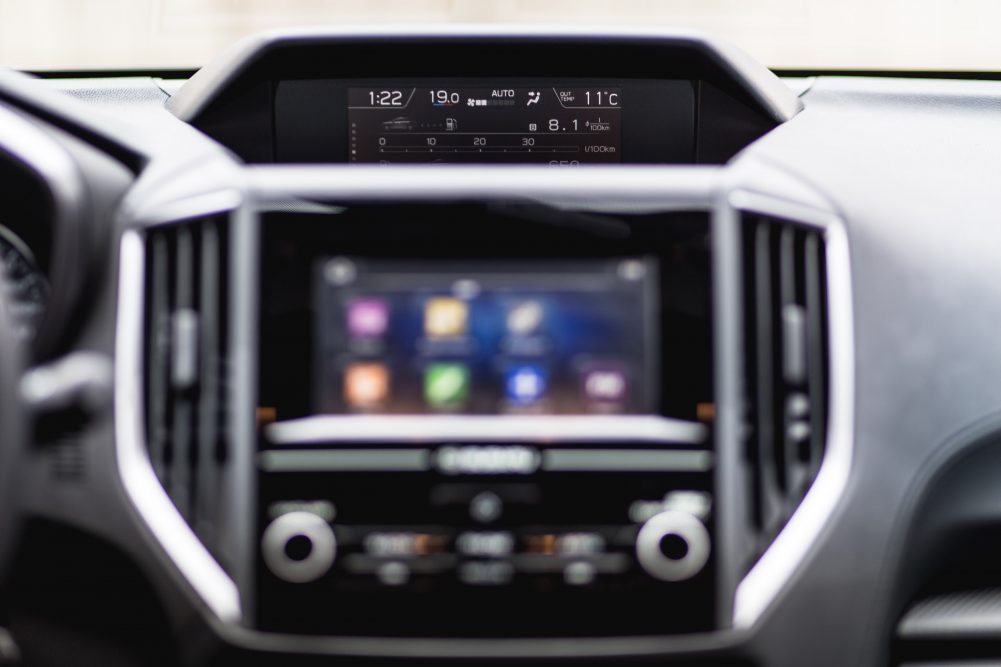 On the road, Subaru’s improvements in chassis dynamics and suspension calibration are truly impressive. You can tell this comes from the same people that engineered the BRZ, one of my favorite cars on sale these days. The Impreza inherits a revised electric power steering, which gets a lower turning ratio, from 16.0:1, to 13.0:1, the same as in the BRZ. This translates to quicker reflexes and a nimbler feel overall. Dampers have also been drastically retuned, leading to lower body motions and minimal body roll, all while somehow maintaining a firm ride that doesn’t beat you up over the hard stuff.

This is a very well-calibrated car. 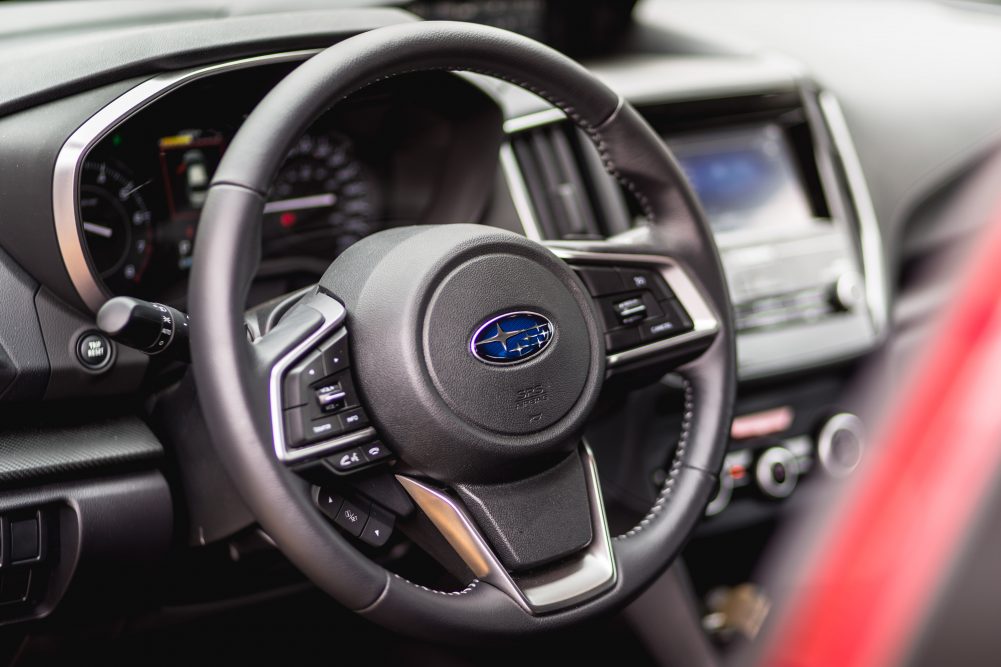 Couple this to a significantly more solid chassis you can actually feel behind the wheel when the car glides over heavy road imperfections, as well as Subaru’s acclaimed symmetrical all-wheel-drive system, and this Impreza comes through as a spirited and decisively refined performer. More importantly, the Impreza is finally up there with other fun little cars like the new Civic or VW Golf. You’ll want to bring it out to a country road just to fling it around, no matter the weather conditions. I can only imagine how it would feel with more power. And a stick. 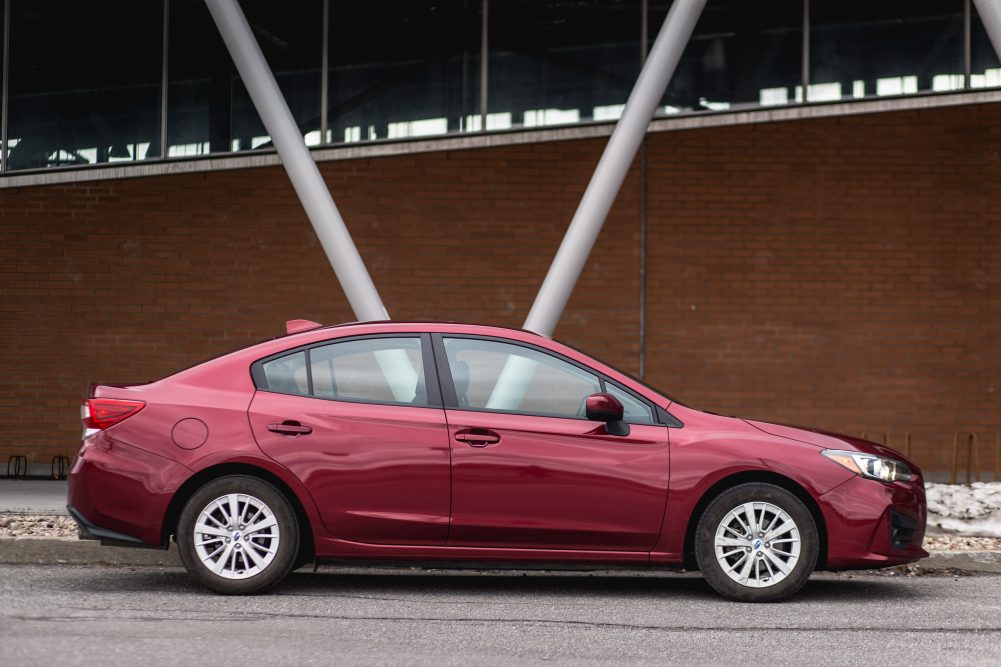 With the return of the five-door, Subaru finally has the right weapon to take on the new wave of fantastically engineered compacts out there such as the Civic, Chevrolet Cruze Hatch, and Hyundai Elantra, all of which also offer a hatchback alternative.

To cope with the competition, this Impreza comes in twelve different combinations. Everything begins with the base, Convenience Impreza sedan, which comes by default with the five-speed manual, and costs $19,995. The same car in hatch form goes for $20,895. That’s affordable, considering you’re getting all-wheel-drive standard in your compact. 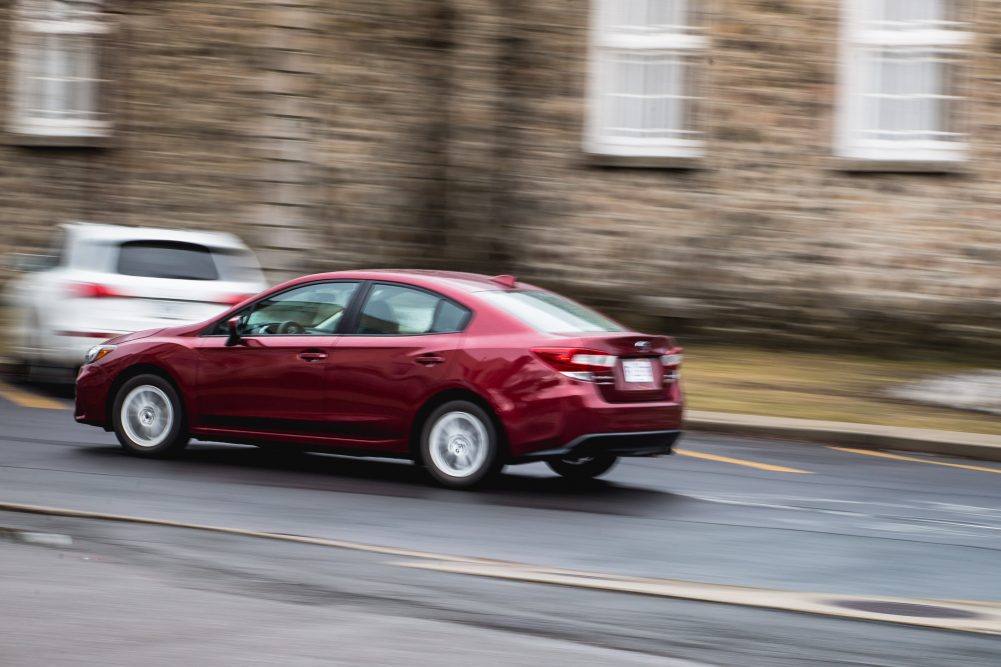 Finally, at the top of the Impreza range lies the Sport-tech with technology package at $30,995 for either a sedan or a hatch. That model only comes with a CVT, but it’s loaded with leather, upgraded wheels, fancy headlights, and Subaru’s Eyesight autonomous tech package.  In comparison, a Honda Civic sedan or hatch, which comes out of the box with more power, goes for about $3,000 less than the Impreza, but doesn’t offer the added benefit of all-wheel drive. 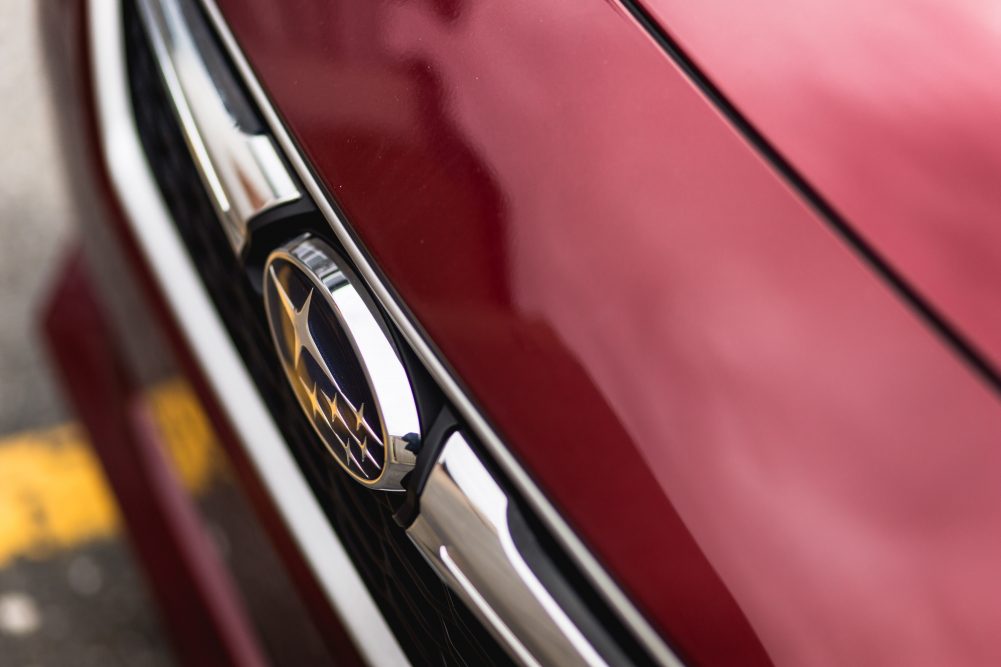 So there. Good job Subaru, you’re off to a fantastic start with your small car. My only gripe is the lack of power. While competitors offer a more powerful engine choice as you climb through the lineup, the Impreza stays stuck with a disappointing 2.0-liter that, from my experience, doesn’t seem all that more fuel efficient than the one it replaces.

I say this base Impreza is without fail a solid foundation for the Subarus we’re all eager to see: the WRX and STI sisters. Thanks to this new promising platform, Subaru is now properly armed to take on the Ford Focus RS, Volkswagen Golf R, and upcoming Honda Civic Type R, a war enthusiasts from around the world simply can’t wait to be dragged into.

Review of the 2017 Subaru Impreza by William Clavey
Compact Cars