2021 Alfa Romeo Giulia Quadrifoglio Is The One You Actually Want 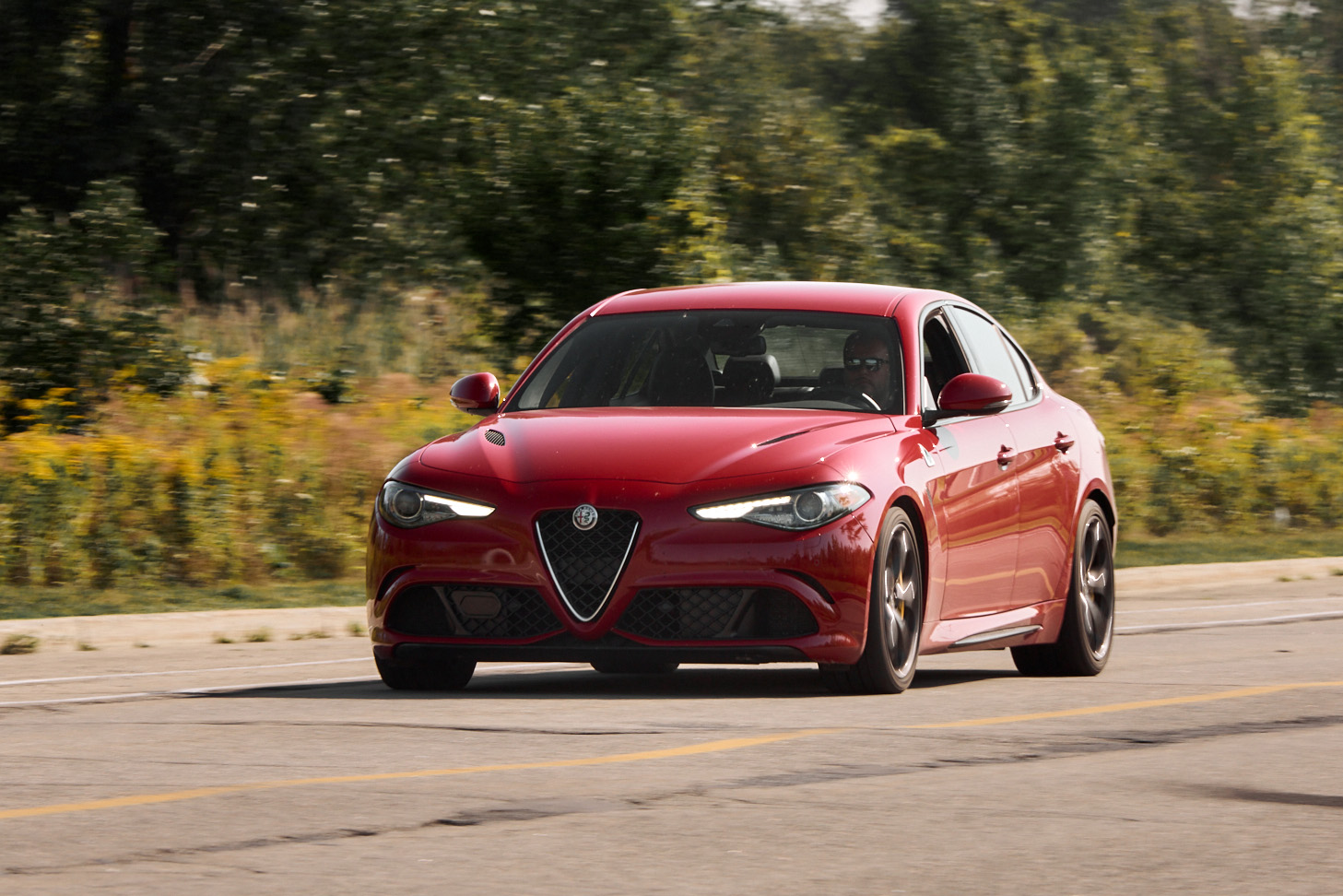 The 2021 Alfa Romeo Giulia Quadrifoglio isn’t a car you purchase out of reason. It’s one of those beautiful objects that seduces your heart through emotion. It represents temptation, the kind of indescribable desire that defies all logic. It’s the car you actually want to own, even if you ended up buying something German. Why? Because you were told it was the “smarter” choice. Face it, man. You’d rather own an Alfa. 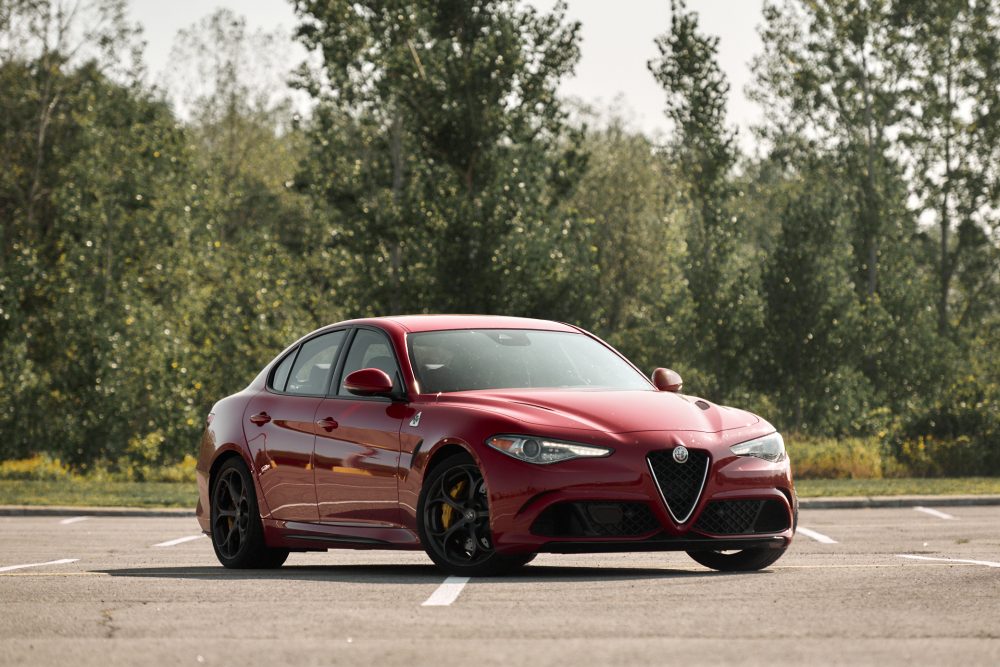 On paper, the Giulia Quadrifoflio doesn’t do anything necessarily better than a BMW M3. I mean, contrary to that BMW, the Alfa can’t even be had with a manual gearbox on this side of the pond. Fundamentally, the reason we auto enthusiasts are so in love with Alfas isn’t because they’re better sports cars. It’s because they’re so god damn imperfect. 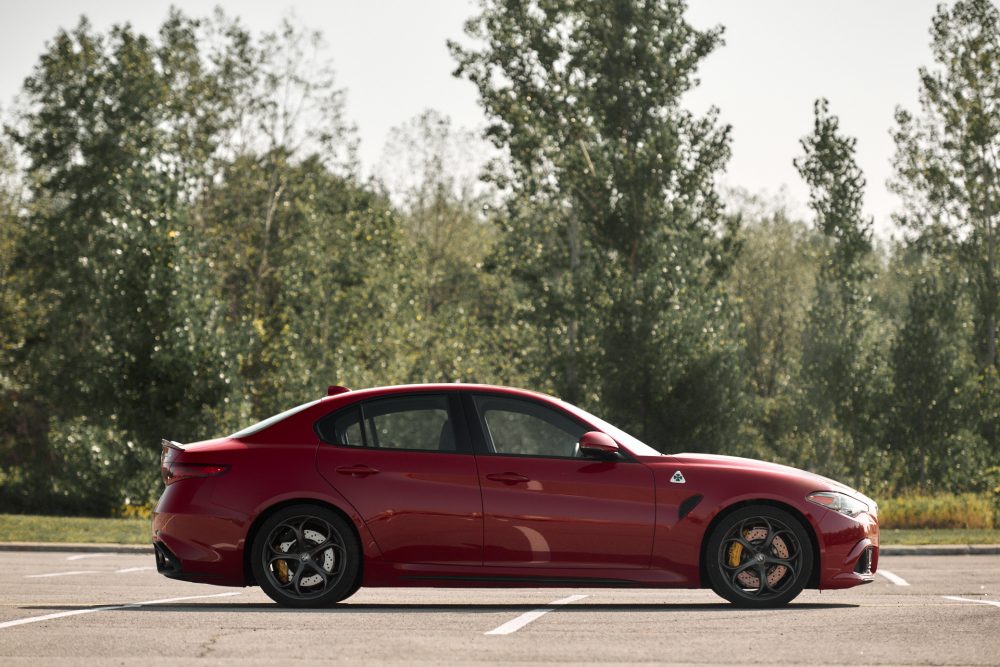 Like all Italian machines, the 2021 Alfa Romeo Giulia Quadrifoglio has flaws. Yet, it’s this beautiful fallibility that makes it so appealing. For instance, it may pump out the same kind of horsepower as its main BMW rival, but its engine isn’t a perfectly aligned straight six. It’s actually a Ferrari V8 with two pistons shaved off. The front door openings are way too small, which means getting inside the car feels wrong. The infotainment system is hard to comprehend, and the way its exhaust note bounces off concrete walls at full boil is offbeat. Yet, that’s precisely where lies its charm. 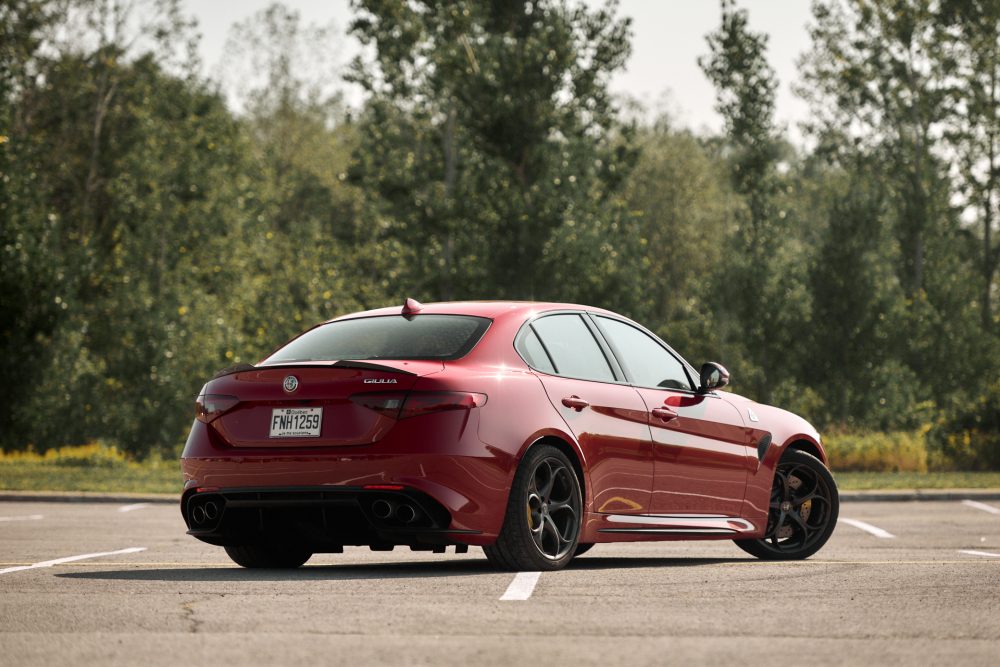 The Quadrifoglio is the most powerful version of the already enjoyable Giulia sport sedan. From a performance standpoint, it’s up there with cars like the BMW M3, but also the Mercedes-AMG C63 S, or the Audi RS 4. You distinguish a Quadrifoglio from the four leaf clover that sits on its front fenders, an homage to Alfa’s race cars who wore it for good luck. 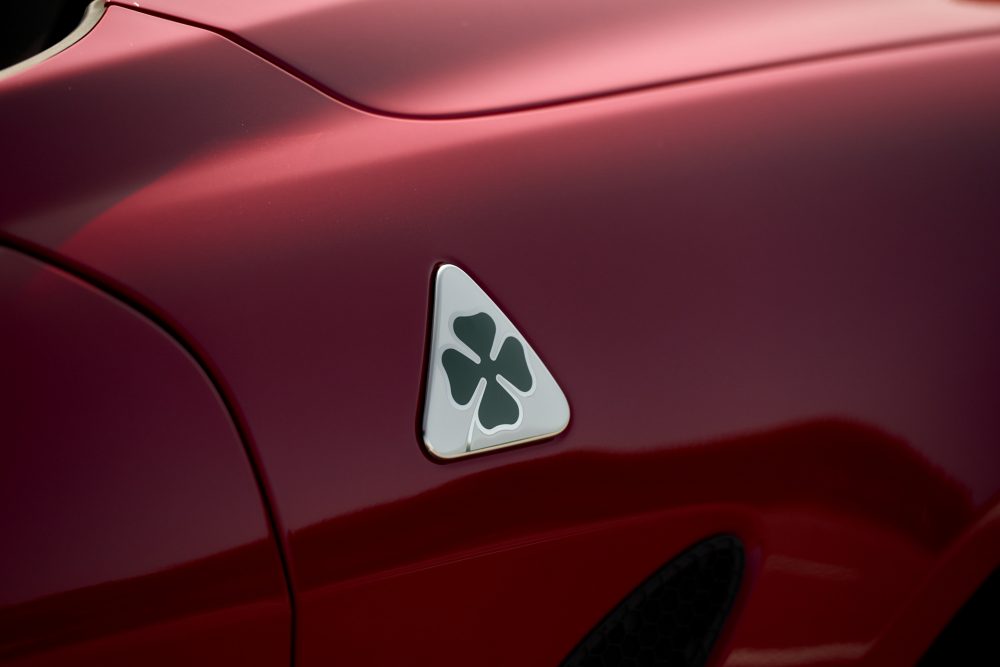 There’s also a more prominent front chin spoiler, side skirts, a massive rear diffuser, a wider stance, larger wheels and tires, a subtle carbon fiber wing and a carbon fiber hood. Power comes courtesy of a twin-turbocharged 2.9-liter (so imperfect) V6 that’s good for a stout 505 horsepower and 443 lb-ft of Italian torques. That engine is mated to an eight-speed automatic transmission provided by ZF. It’s essentially the same box that Stellantis also fits to its Hellcats. All Quadrifoglios are rear-wheel drive. Alfa Romeo claims its sport sedan will hit 0-100 km/h in 3.8 seconds. 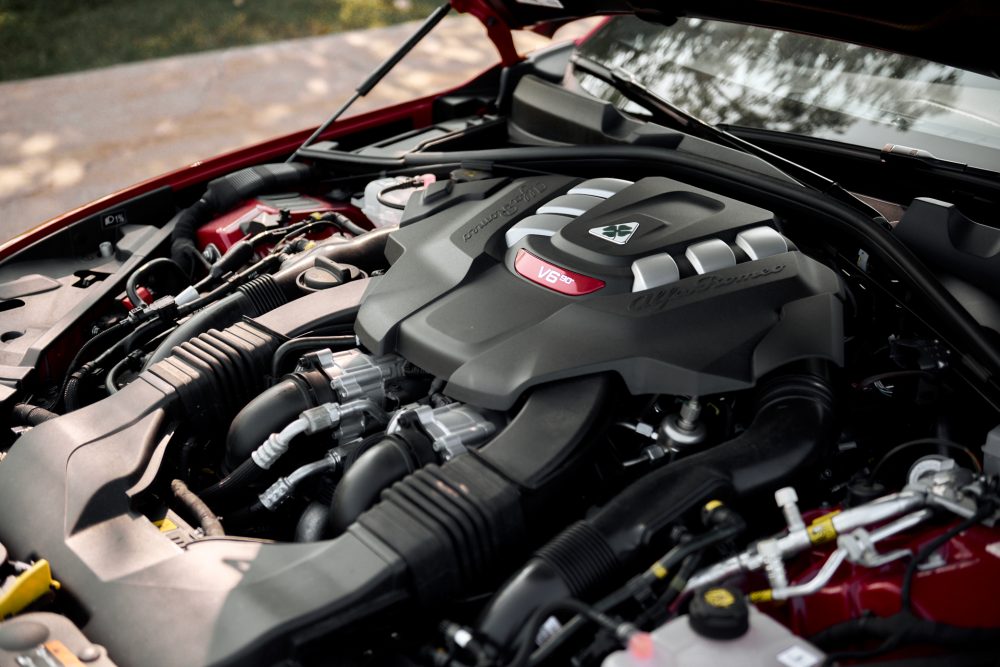 Pricing for a Giulia Quadrifoglio kicks off at $92,490, which is a bit more than a base BMW M3. My car’s Alfa Rosso red paint was a no cost option, but some optional colors, like the so sick Verde Montreal green paint (not the same green as in the Six Underground movie), cost $2,600. Those black, 19-inch phone dial wheels are an extra $595. And I highly suggest you tick off the Sparco leather/alcantara and carbon fiber race seat option. Sure, they cost $4,100, but I mean, they just look so dope. As it sat, my tester stickered at $100,625.

Drive It, Feel It 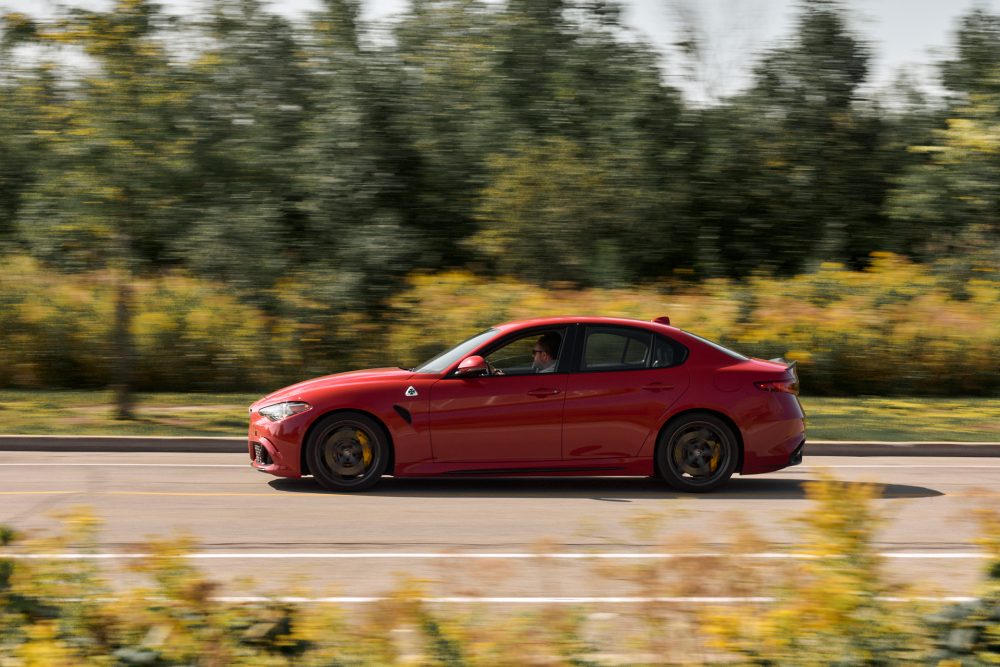 Very much like the Honda Civic Type R, it’s very hard to express in writing how good the Giulia Quadrifoglio is to drive down a winding road. One doesn’t simply go fast in this car. You savor every instant as if it were an expensive Italian meal. The Giulia is also one of those cars that won’t show its full potential until you start fiddling with its drive modes. 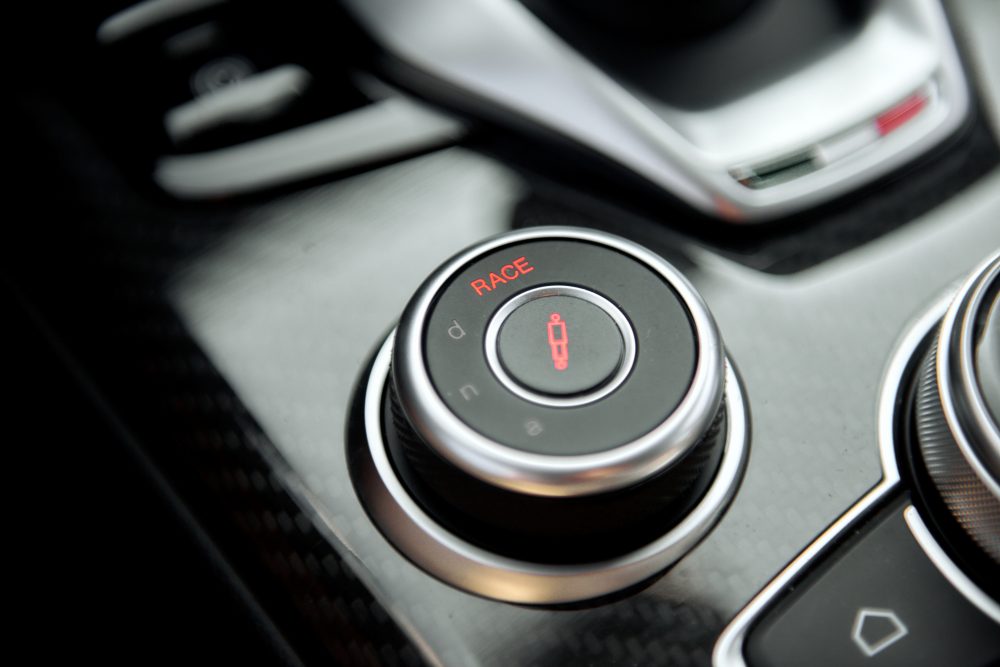 Even in Sport mode, or what Alfa calls D on the DNA switch, you’re only experiencing about three quarters of what the car can actually deliver. The real magic happens in Race mode, when traction control is turned completely off and those gigantic quad exhausts release their mightiest decibels. Race is also where the Giulia’s adaptive dampers are at their stiffest, although they can be adjusted separately in the event that your spine is weak. 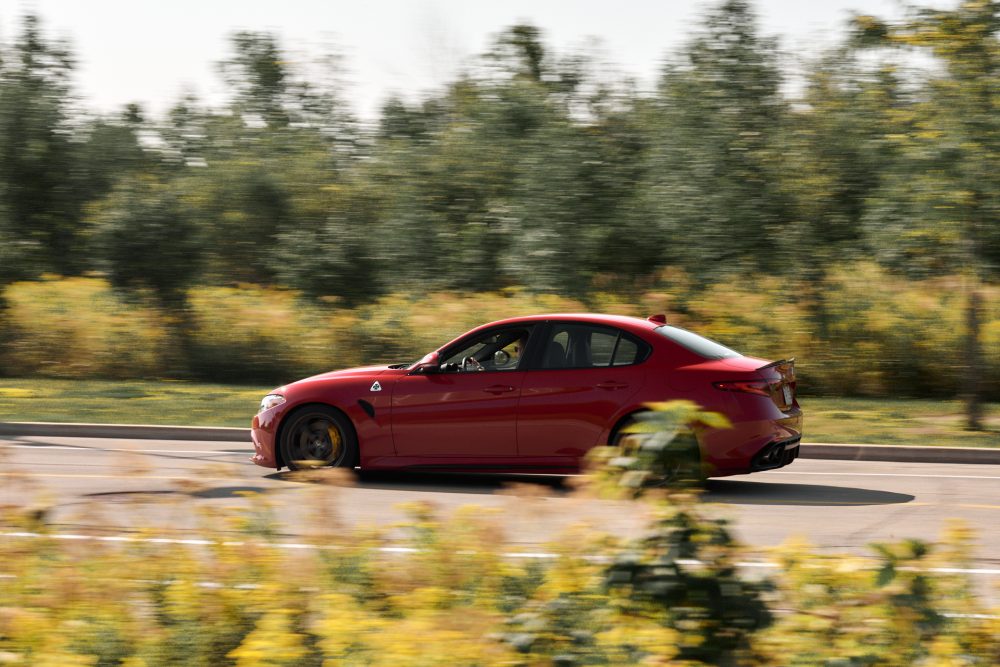 The moment its V6 starts to rev, the Quadrifoglio sends vocal blaps and blurps out the rear. I’ve heard more beautiful soundtracks come out of other sport sedans – this sounds more like a pissed off tractor -, but the Giulia QF definitely has personality, as if it’s talking to you. Bury this engine in higher gears, and it’ll respond with deep angry burbles, as if it’s complaining about the fact that it can’t sing its full melodies. 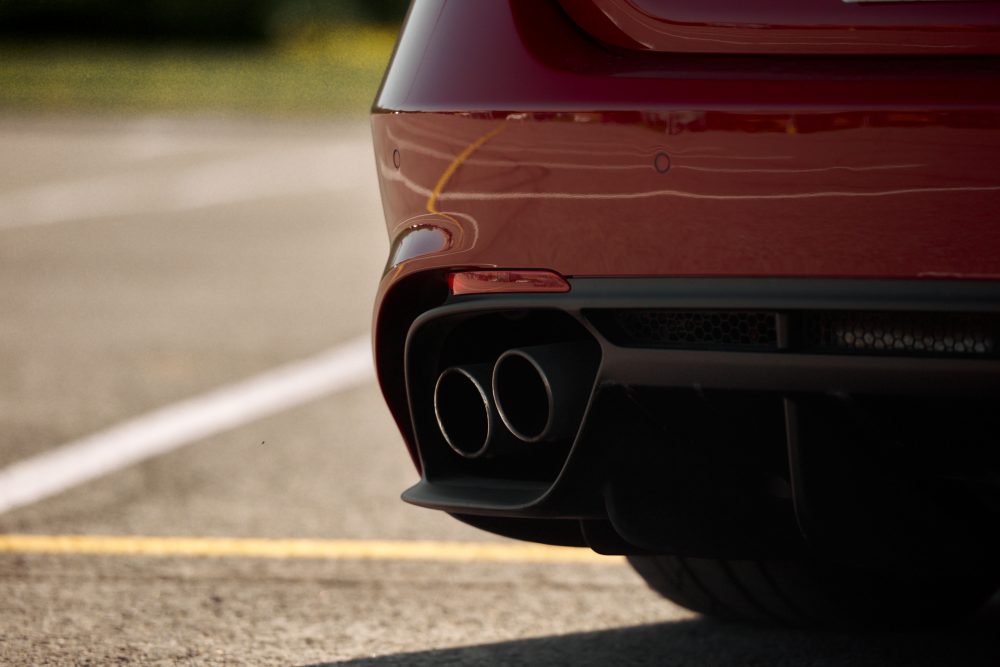 Give it a bit too much throttle as you’re casually shuffling through the gears though, and it’ll occasionally shriek unexpectedly as if you’ve just tickled the beast. Downshift too high, and yes, a loud BANG will pop out from underneath its curvaceous sheetmetal. And when running full boil, this Italian steed is just loud as hell. 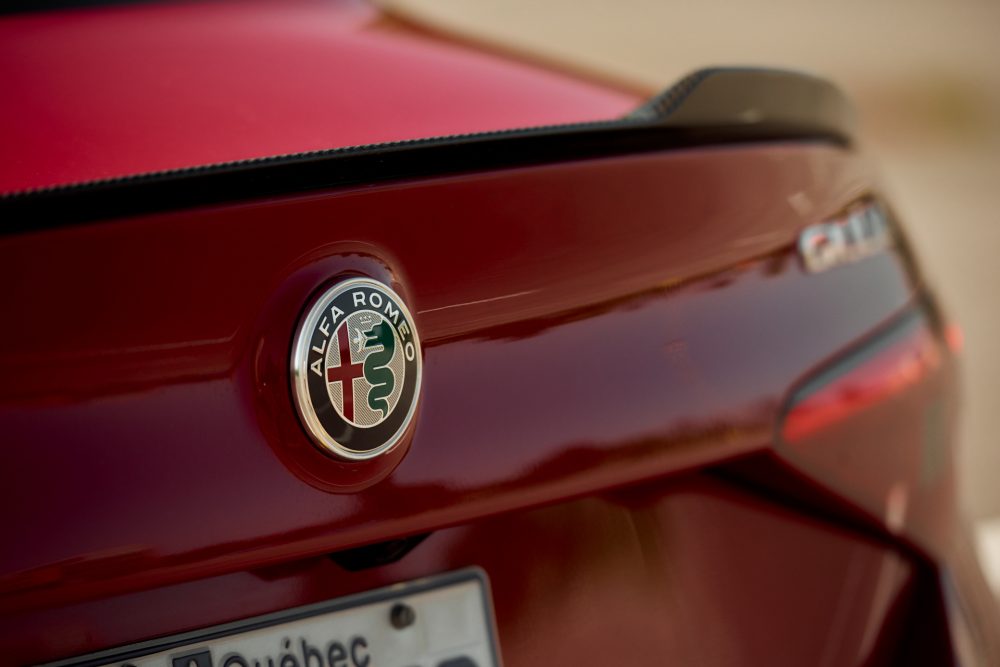 The Giulia Quadrifoglio has a stiff chassis. Its steering is thin, like old sports cars, but the feedback is ample and it’s lightning fast. The transmission is always ready to pounce, somehow constantly sensing what you’ll do next, a now expected ZF feature. I personally love those enormous column-mounted paddle shifters. They’re just where God intended them to be. 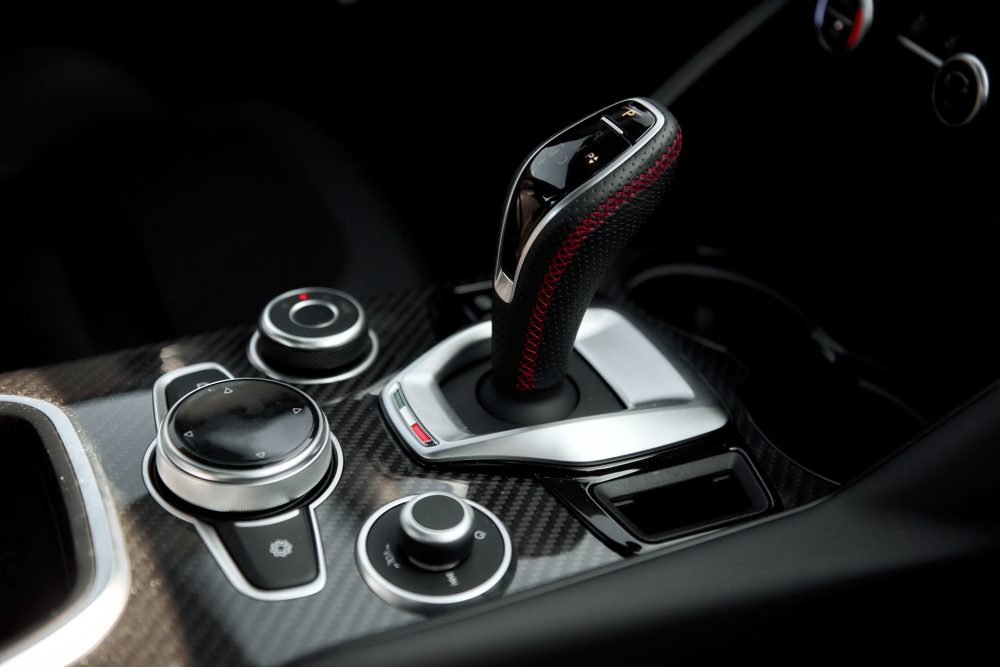 Down a curvy bit of tarmac, this Alfa sticks to the road, providing massive grip and yielding a high threshold before starting to slide. Yet, when that rear end gives out, the car’s chassis composure is so perfectly balanced you’ll quickly bring things back in check with a quick correction of the steering wheel. There is some turbo lag, especially underneath 3,000 rpm, but once those turbos spool up, power builds in a whirlwind of forward thrust. Power delivery is surprisingly linear too. 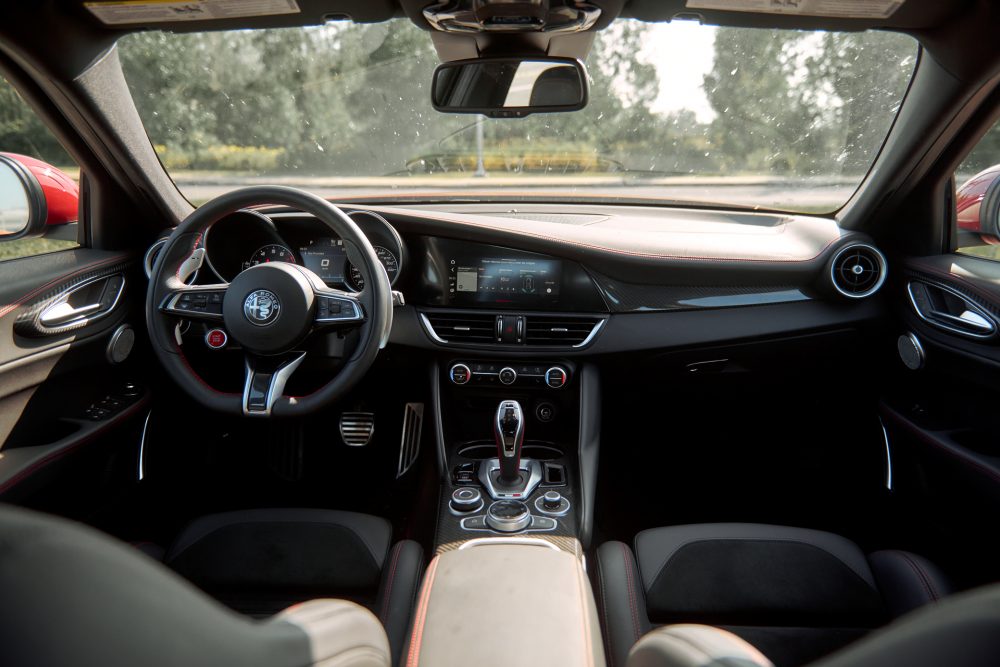 Inside, the Giulia Quadrifoglio definitely doesn’t look or feel as upscale as a German alternative. Material quality is good, but never great, and the old analog gauges do feel weird in a luxury sport sedan of this price bracket. Like Mazda and BMW, Alfa stays true to the console mounted knob dial to manipulate the infotainment system. To its defense, it works rather well and reacts quickly to your inputs, but the interface itself is still clumsy and crammed with too many sub-menus. 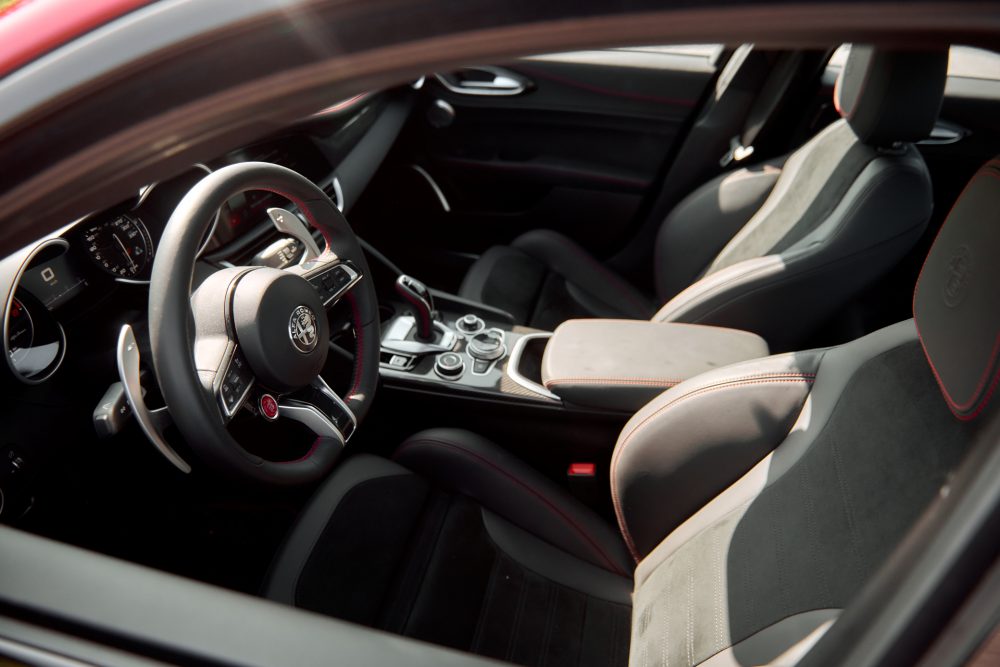 But the front racing seats are a gem to spend long rides in, all while providing the support your spine needs during hard cornering. When set to comfort mode (or N), you’d barely know you’re driving a performance machine from how compliant the adaptive dampers are. The Giulia QF is a darn good daily driver. 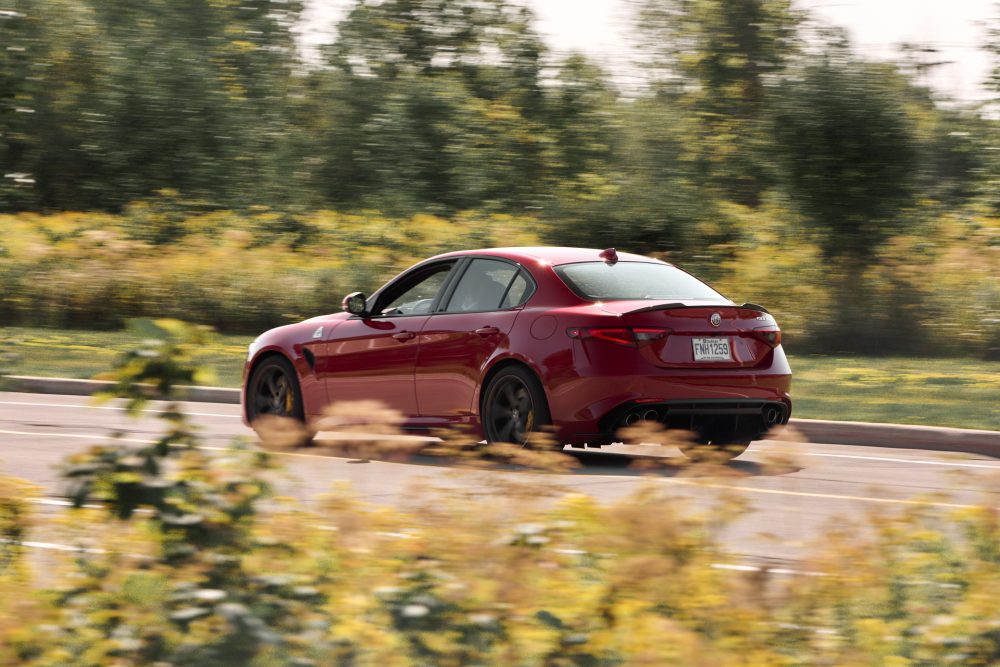 The 2021 Alfa Romeo Giulia Quadrifoglio makes its priorities clear the moment you strap yourself behind the wheel. It was made to first stir your soul and then serve as a transportation device, and that’s precisely why it’s such a special machine. It’s got flaws, yes, and its reliability record isn’t all that good. But that Italian design, that passion you feel through the steering wheel, that logo that gets people talking and the sounds that come out of its exhaust system constitute the essence of driving an Alfa. It has no reason to exist, but I’m damn glad it still does. Enjoy the Giulia while you still can.