2021 Dodge Charger Hellcat Widebody Is Precisely That So Ef Off 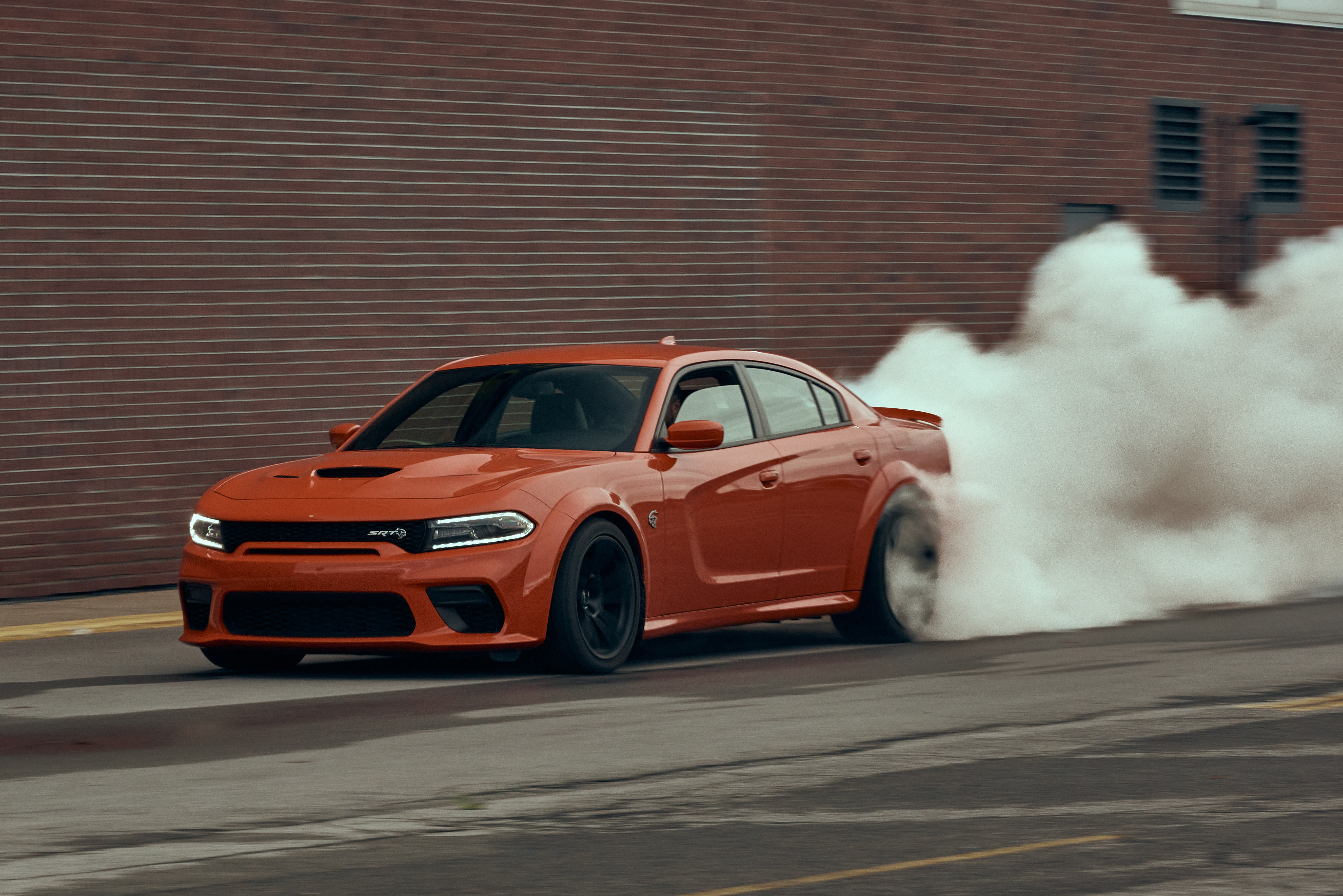 What don’t you already know about the 2021 Dodge Charger Hellcat? That it’s now offered in a widebody version like the Challenger Hellcat? Now you know. I mean, I could just post pictures of me doing big fat burnouts all day, but that wouldn’t be very professional. Also, if you want FCA to lend me more Mopars, I need to write an article on it. But here’s the deal though: the Charger Hellcat Widebody is a blast to drive. Not because it’s precise like a MINI John Cooper Works GP or comfortable like a Lexus LC500. Because it has 707 god-damn horsepower. Any more questions? 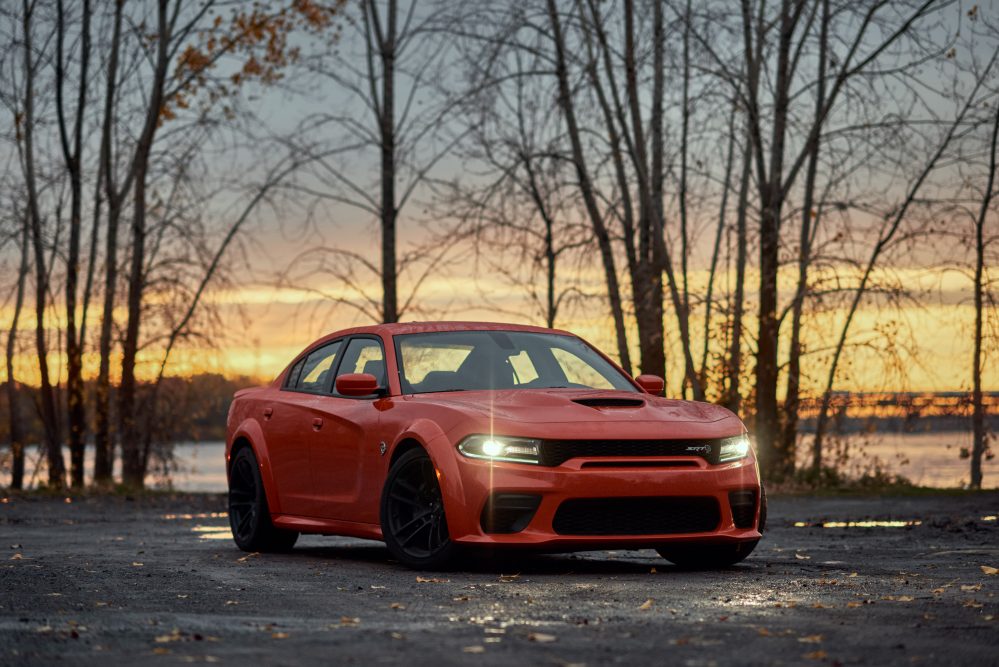 If you’ve been following this blog since its very beginning, you probably remember a certain Dodge Charger Daytona of the same color as the one you see here. Yup, it’s the same darn Go Mango paint job as that 2017 example, but hey, it looks good, no? What’s even funnier is that the 2021 Dodge Charger Hellcat you see here is essentially the same car as the one I drove back then. 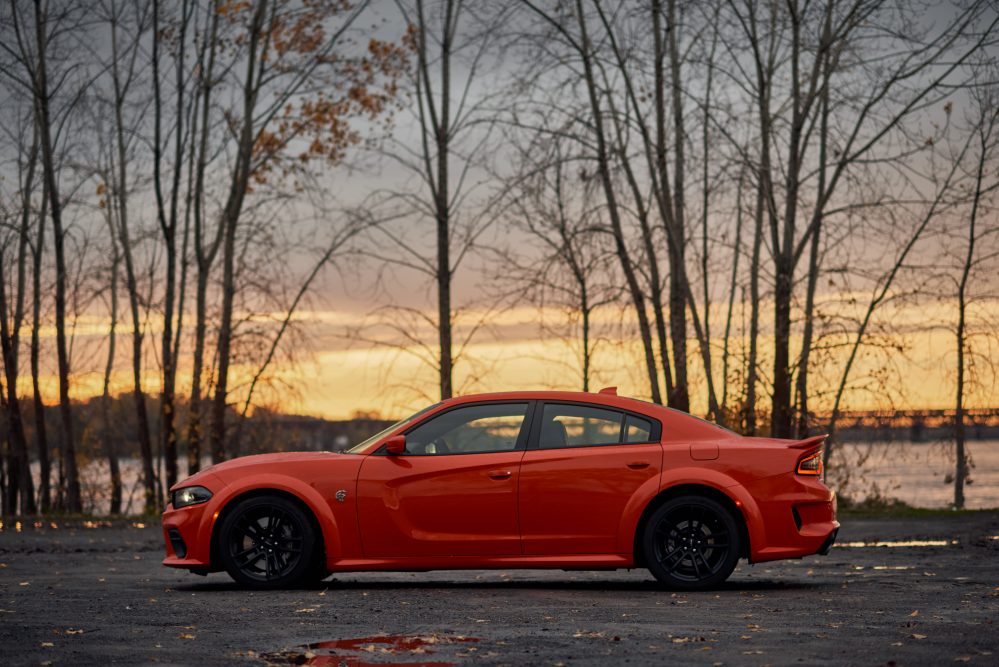 Except, it’s not, because this one has Hellcat and Widebody added to its name, or if you prefer, FCA’s hilarious way of saying it’s “all-new!”. It’s funny, yes, but not all that silly considering how well these over-powered sedans are selling in North America. Think about it, Dodge sold more than 100,000 Chargers of all variants in the US and Canada last year. We’re talking about a sedan here, a type of vehicle that isn’t supposed to be selling well in this SUV-infested world. So yes, I totally understand FCA for continuing to milk that cow. 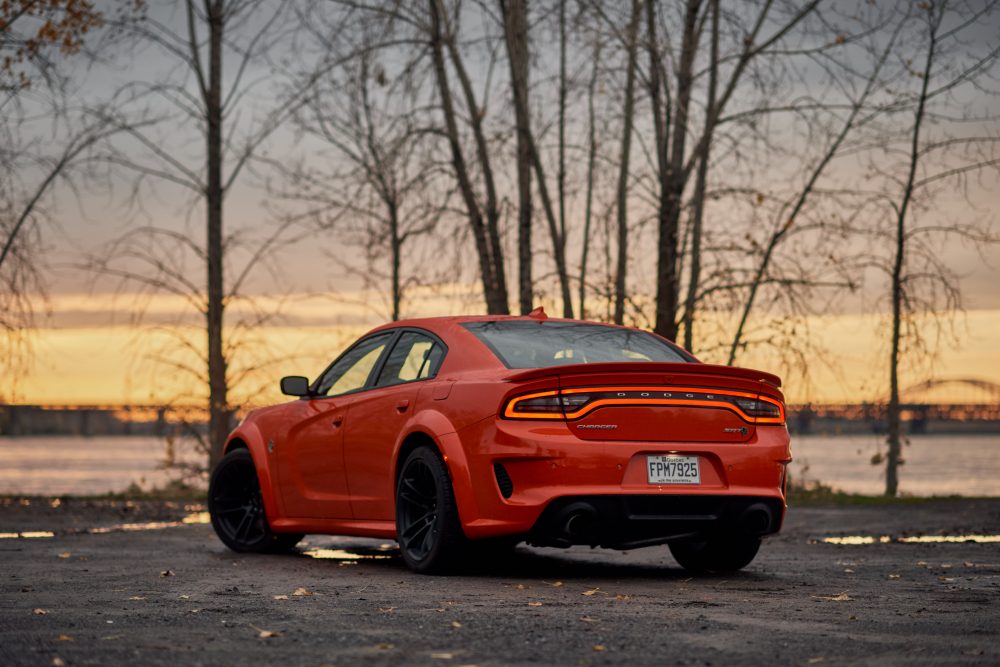 And the better for it because nobody, and I mean nobody, has the guts these days to manufacture not one, not two, but five vehicles (if you count the new Ram TRX) powered by a 6.2-liter supercharged V8. Dodge goes even further than that by offering four different flavors of V8 for the Charger. How is this not the coolest brand for performance enthusiasts? 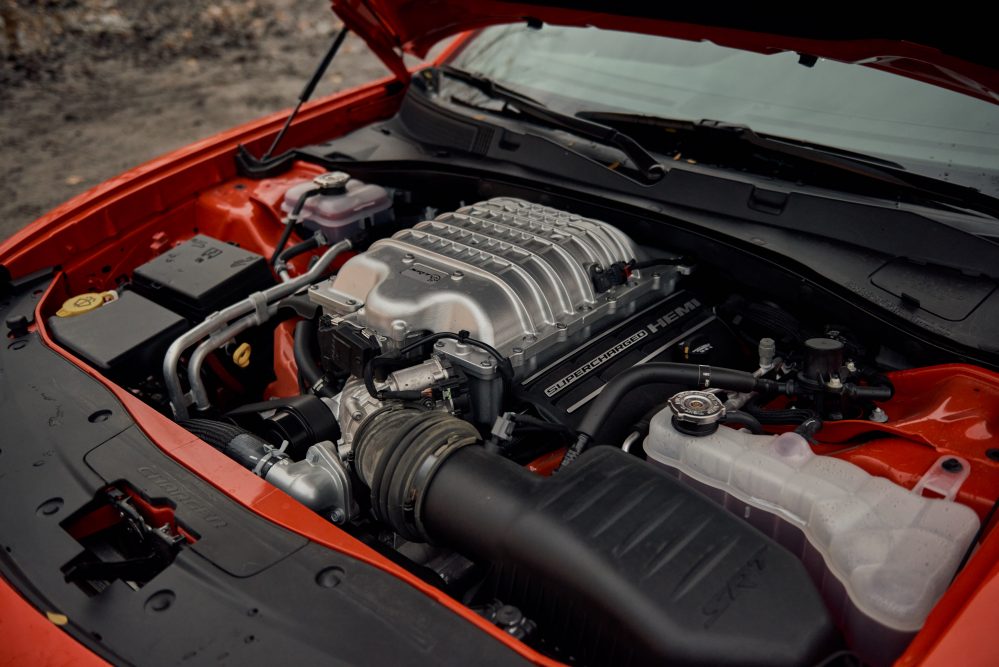 So, yes, horsepower is still rated at 707 horsepower, which is great. If you’re wondering why the Charger doesn’t have 717 horsepower like its two-door sister, that’s due to some differences in the way the air intake is shaped. Does a ten horsepower difference even matter? No it doesn’t. Torque is rated at 650 lb-ft. All of it is sent directly to the rear wheels via a ZF-sourced eight-speed automatic transmission. Fuck yes. 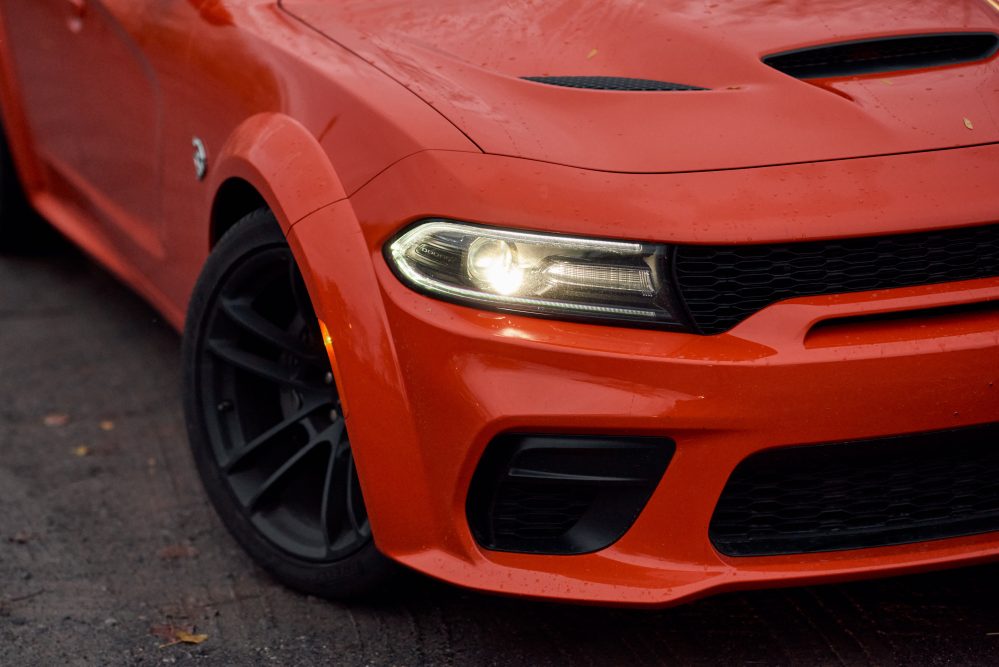 The widebody package, which now comes standard on all Hellcat-powered Chargers, widens the car by 3.3 inches thanks to large plastic fender flares. This allows Dodge to fit the car with massive 305-wide tires on all fours, which is downright insane. Dodge then fiddled with the car’s suspension tuning and camber settings in an attempt to improve cornering grip and handling. Meanwhile, the entire car receives subtle, but visible design tweaks that make it look a lot meaner. My personal favorite aesthetic detail is the NASCAR-inspired rear spoiler. 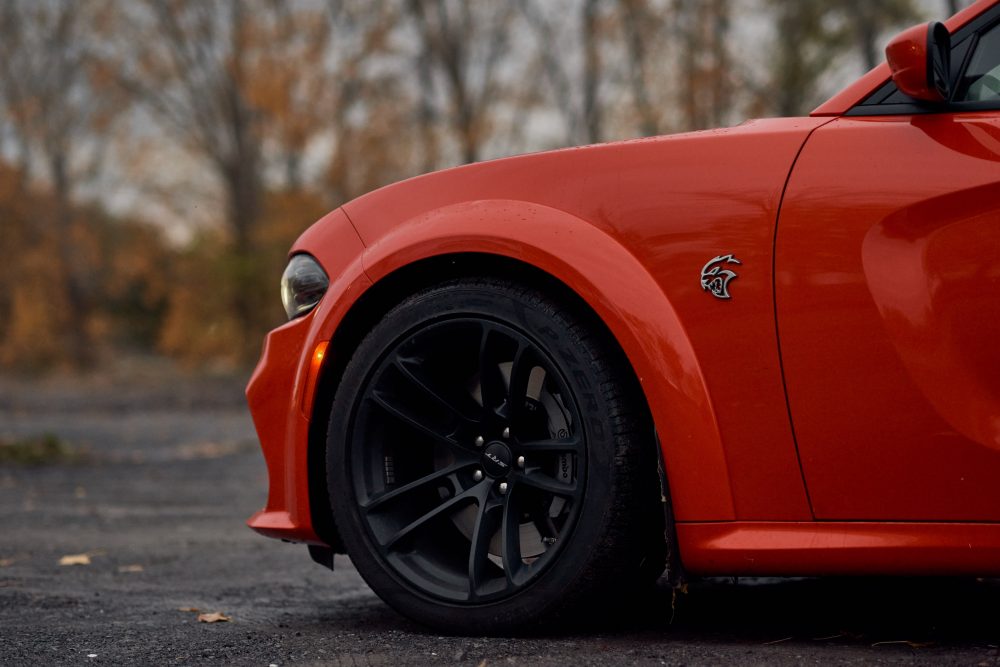 Pricing for a 2021 Dodge Charger Hellcat Widebody is…not cheap. These things kick off at $77,045 before piling on options. The car you see here was loaded, as the cars I drive typically are, for a final sticker price of $92,825. That’s getting expensive for a Dodge. 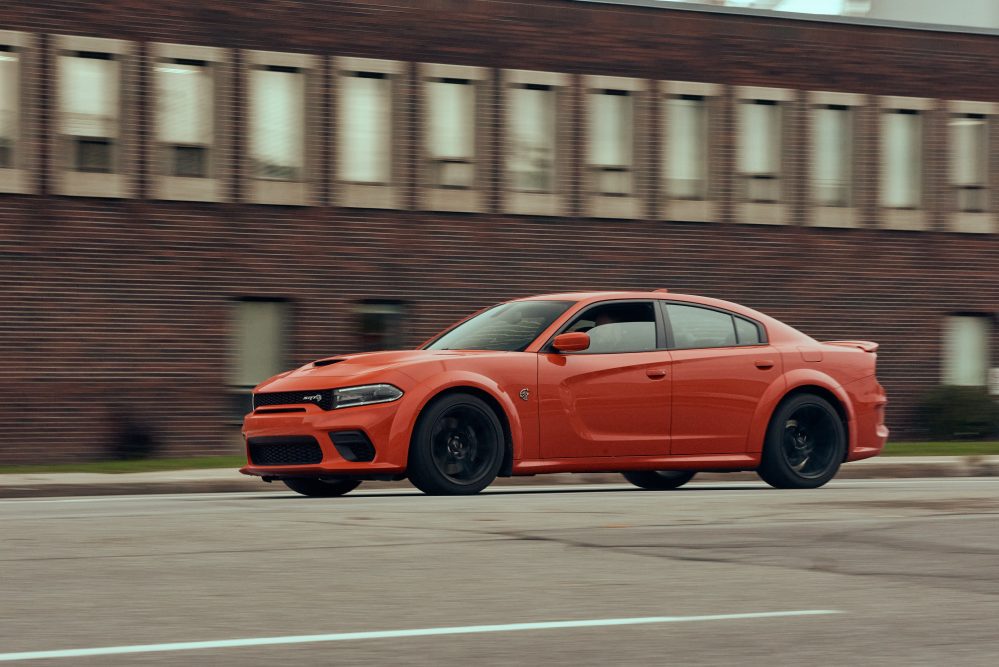 There’s an interesting story behind that burnout top shot, which also helps explain how much of a lunatic this car is. The funny thing is, I never actually tried to light up the rear tires. That’s where this car can become a bit of a handful. Don’t try to pull a launch control maneuver like you would in a, say, a BMW M8. Because contrary to the BMW, which will just squat there and wait for you to release the brakes, the Charger Hellcat will eat up its rear tires within seconds. 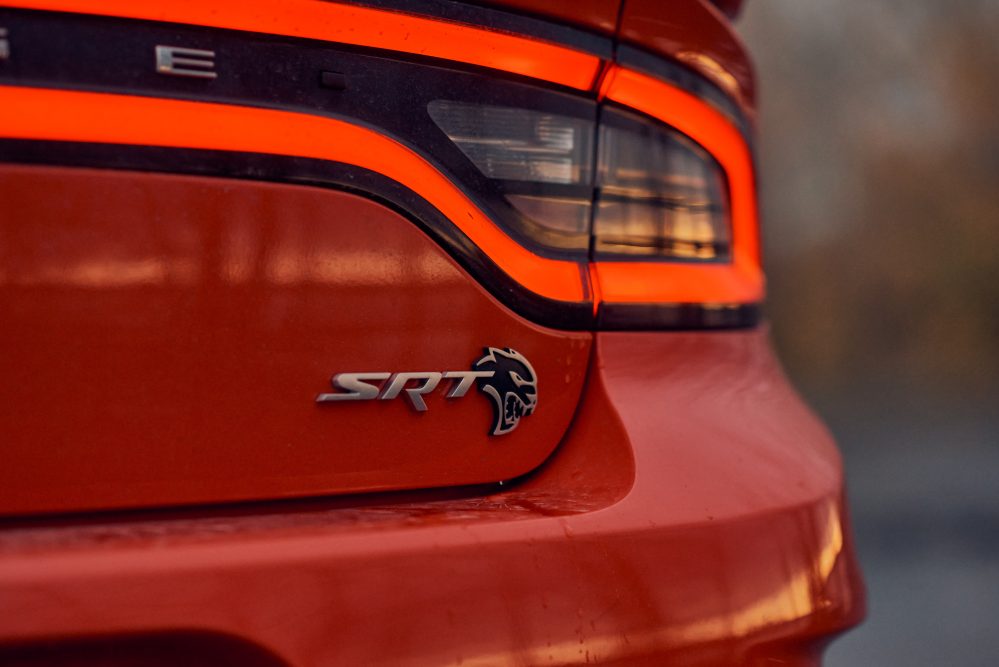 Even if Dodge tried to add more grip by adding larger rubber (this is such a funny way to improve a car), the Charger Hellcat still isn’t an easy beast to tame. If you take your attention away from it, rest assured, it will bite you up in the ass. The thing is, it’s also a car that allows you to easily approach its performance, which ironically makes it even scarier. 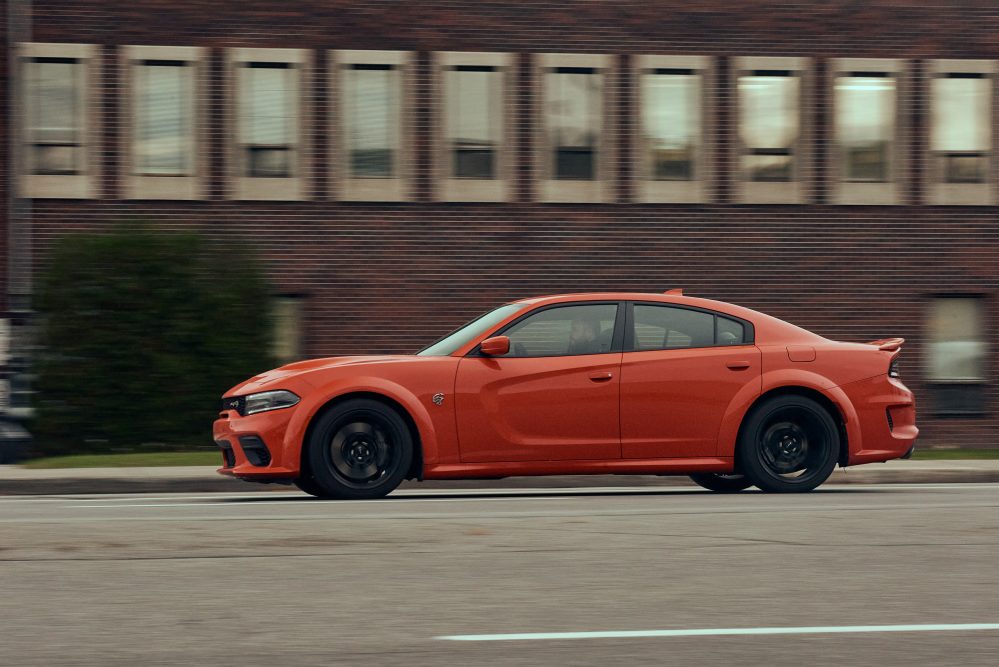 Thanks to all the available drive modes and traction control settings, you can slowly take it all in, pulling back the resistance as you get comfortable with the car. And to be fair, when it’s set to its most comfortable setting, it’s a frankly easy to drive and surprisingly smooth sedan. That’s because when it’s in “Eco” mode (wow I can’t believe they actually called it Eco), the car only churns out 500 horsepower. No biggy. 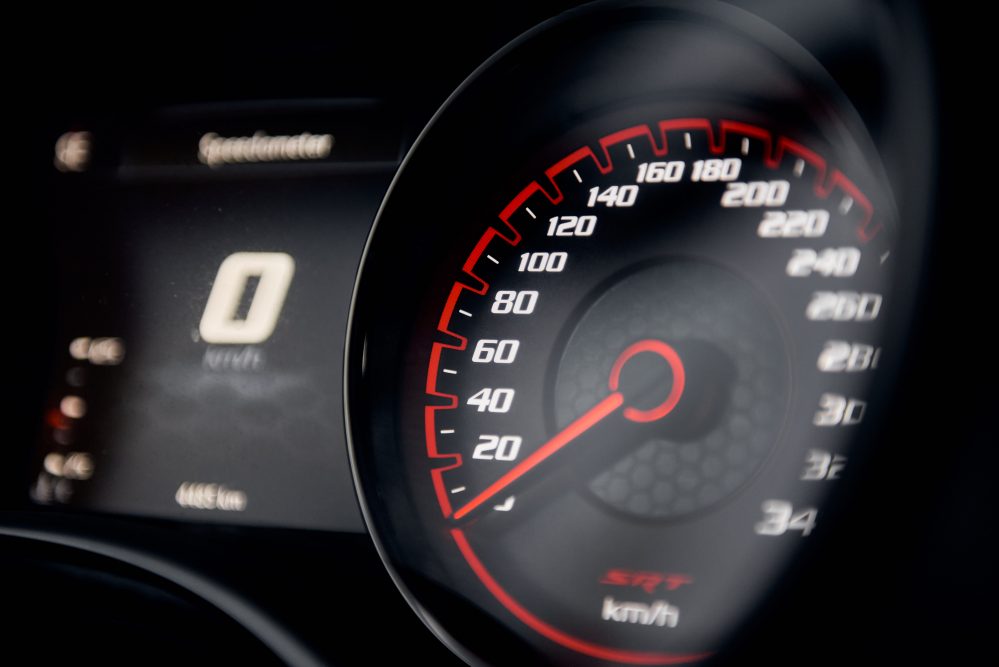 And there lies a part of its charm. A Charger Hellcat lets you get use to its craziness, to a point where you eventually remove all of its driving aids and run it in Track mode all day long. You eventually take it for granted. And that’s precisely when it tries to kill you, something I discovered on a rainy morning as I was returning the car to its home. I literally ended up sideways on the highway, heading straight towards a concrete wall, until I lifted, and the entire thing corrected itself, proving once more that Dodge actually put some thought in the way this thing handles. 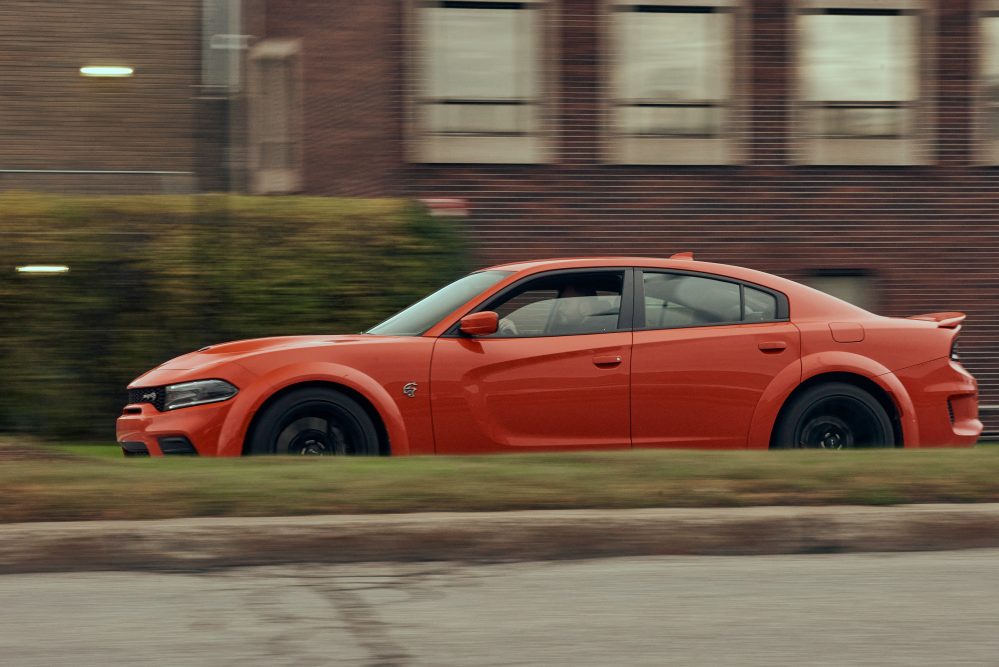 Of course, when you find a dry piece of pavement, also known as a racetrack, you’ll appreciate the overabundance of power and torque this engine delivers. The Charger Hellcat is one of those cars that puts down its performance in a “I don’t give a shit” manner, raising its middle finger to other motorists as it lays a patch of rubber and spits oh-so-glorious Mopar melodies out its gigantic dual exhaust. 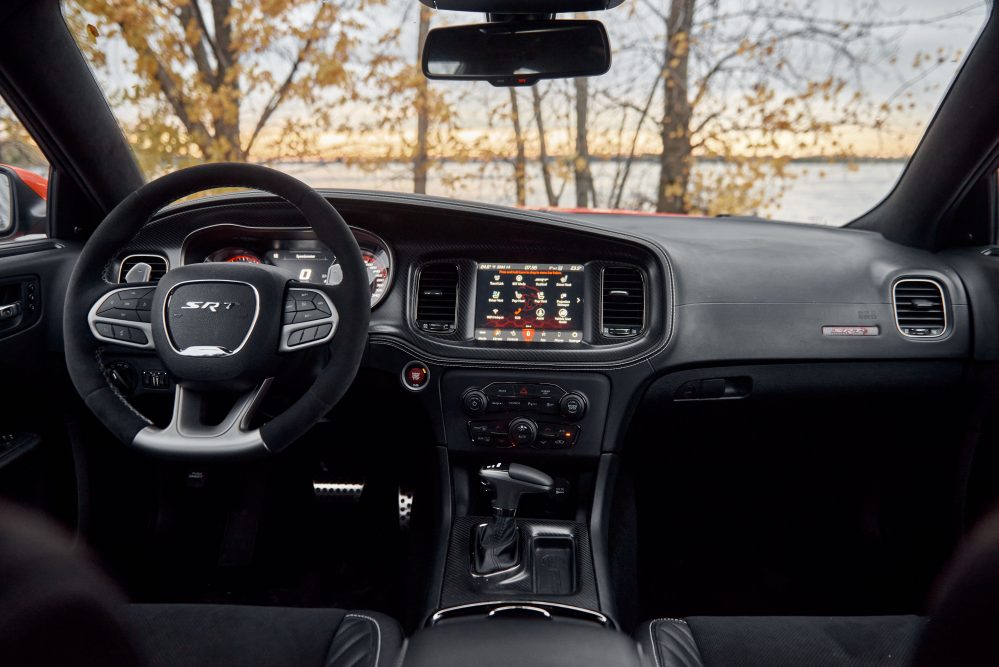 Meanwhile, your meat carcass is hanging on for dear life as your ears bleed from the hellish wine of a supercharger operating full boil.

Inside, the Dodge Charger Hellcat widebody is, well exactly the same as all other Chargers, which means old and dated. Dodge did try to spice things up by way of a few subtle design cues, a new suede-wrapped steering wheel which feels amazing, and thick sport seats that continue to be super comfortable and supportive for long trips. 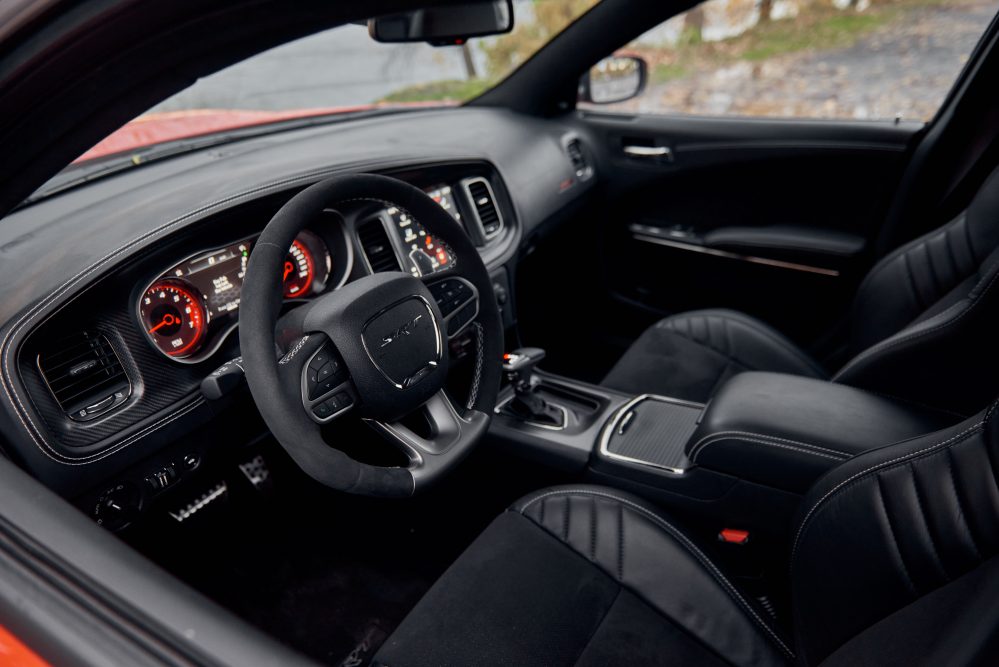 While old, this remains an effective cabin for carrying four people and their gear. Rear head and legroom is still great, better even than some of its front-wheel drive competitors like the Toyota Avalon or Nissan Maxima. And the trunk is downright enormous. What’s more, FCA’s UConnect infotainment system – which is about to change – remains a peach to operate for its sheer simplicity and downright common sense, even if it’s showing age. We’ve seen the Performance Pages over and over again, but they remain one of the best ways to tailor a car to your liking. 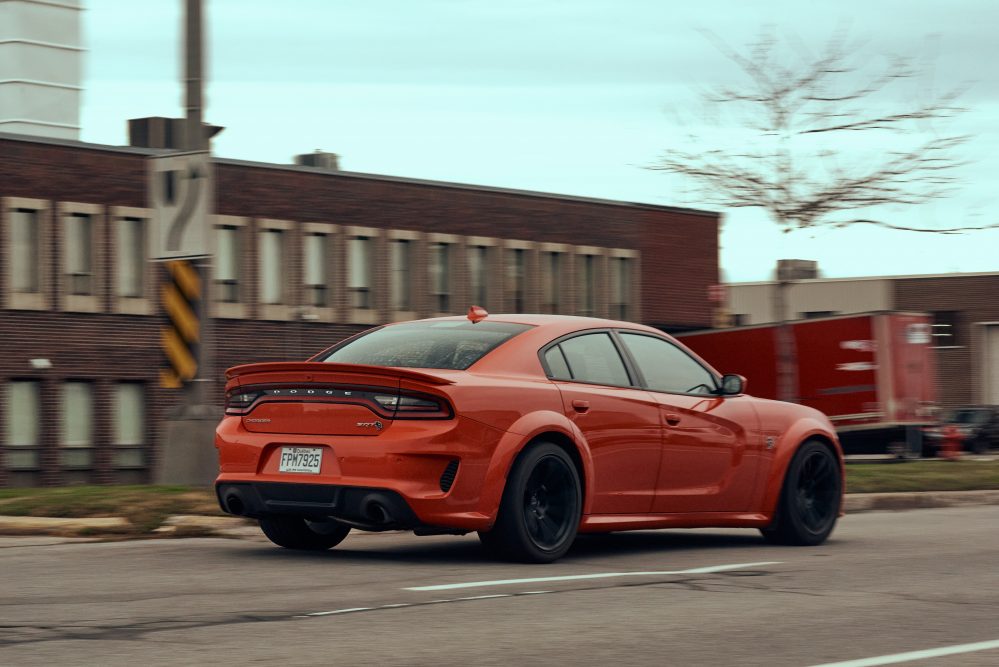 Yes, the 2021 Dodge Charger Hellcat Widebody is more of the same, yet, it’s still a fantastic machine for anyone desiring to GTFO into the countryside. My recommendation is to never take this bad boy for granted, because it will throw you into a ditch within seconds. Respect its performance, however, and it will respect you in return by delivering what is arguably the most adrenaline-packed driving experiece currently on sale.