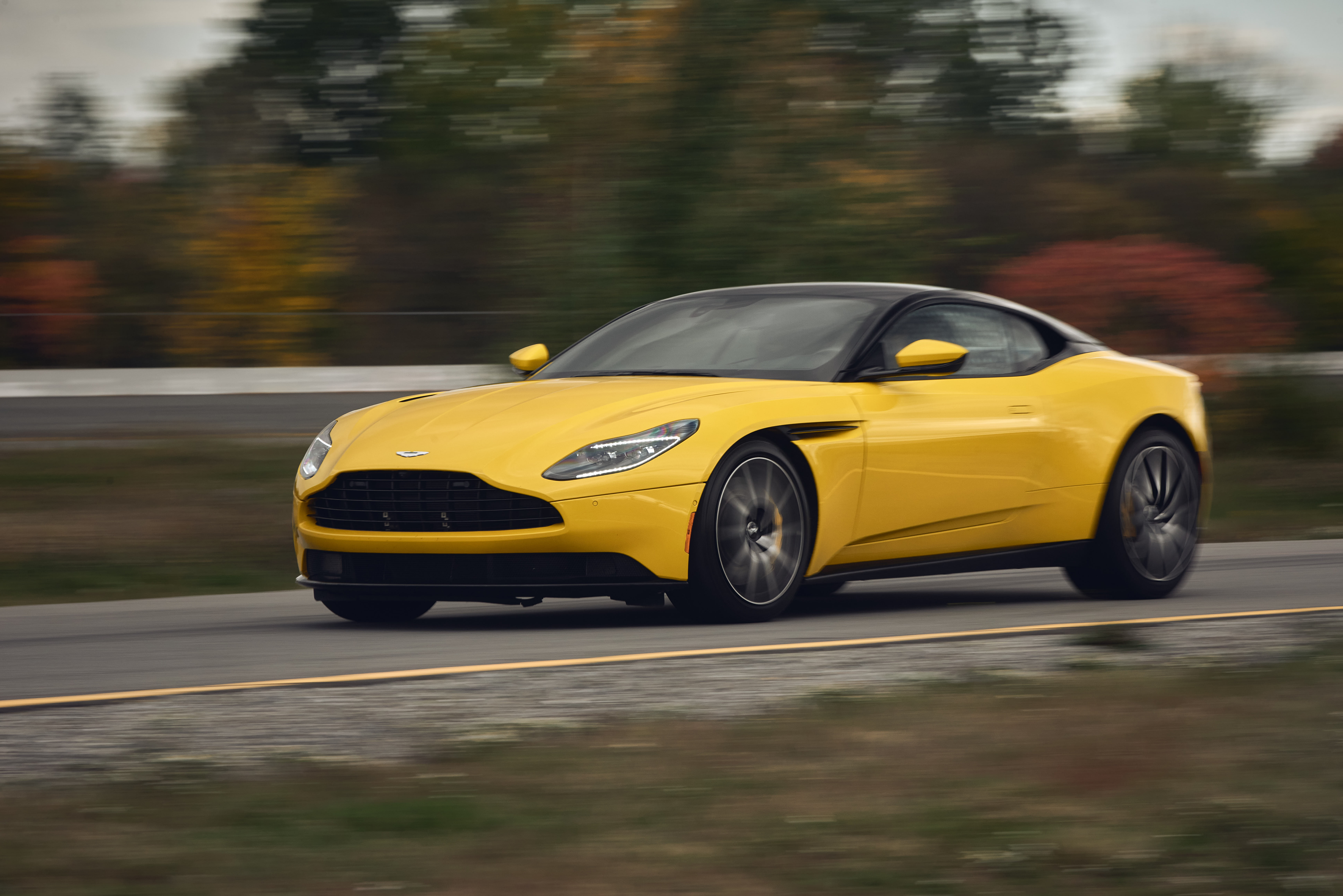 The 2020 Aston Martin DB11 holds a special place in my heart as it was the first Aston I ever drove. It was also the car in which I ventured out on a poutine quest for Jalopnik. Back then, I had been impressed by the DB11’s elegant blend of performance, comfort and technology. Mind you, I hadn’t driven an Aston Martin beforehand, but I was told they were never as polished as the DB11. Three years later, after driving other mind-blowing machines, ranging from a Lamborghini Huracan to a BMW M8 convertible , I’m back behind the wheel of a DB11, but in V8 form. I still love this thing, but I’m not sold on this engine choice. 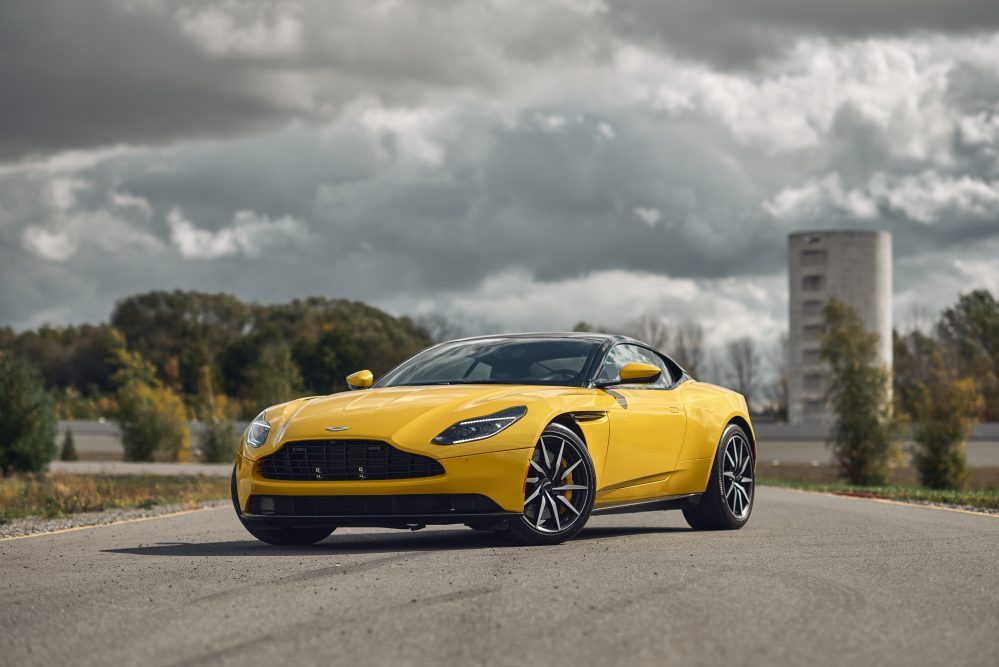 The Sunburst Yellow paint on my tester sure popped the car’s beautiful styling up to 11, making the DB11’s low, wide and flat shape appear even meaner, adding presence and depth to its swooping design. The DB11 has all the classic British sports car ingredients: front engine, rear-wheel drive, with a long hood and a cockpit pulled as far back towards the rear wheels as possible. 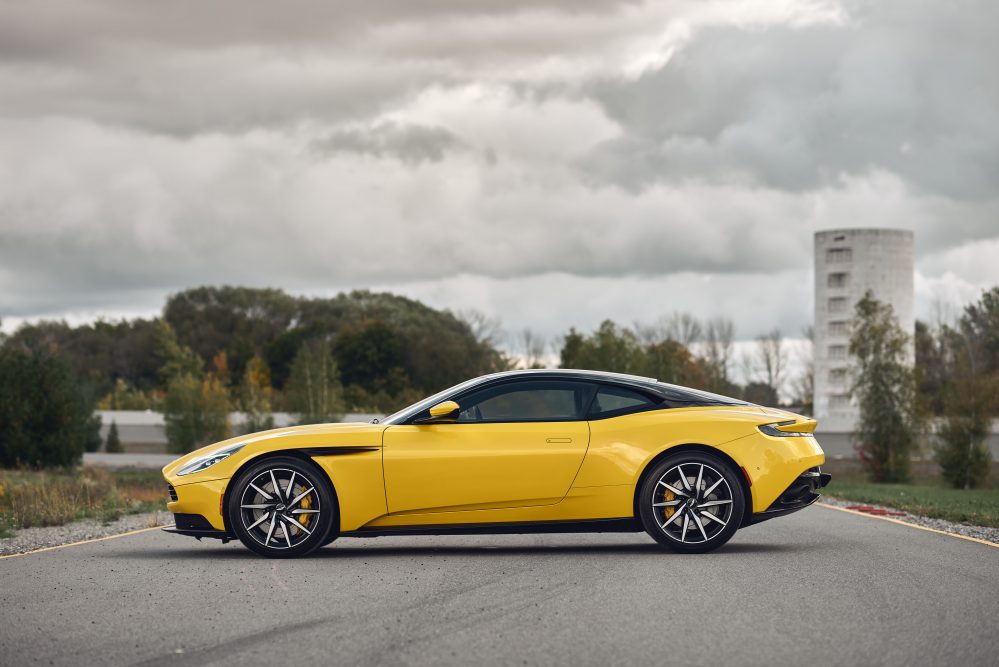 The DB11’s design adheres to a set of rules stamped by a full bloodline of DB Aston Martins that came before it. The last model was the DB9. The DB10 was reserved exclusively for agent 007 in the movie Spectre, hence the DB11 nomenclature for this one. 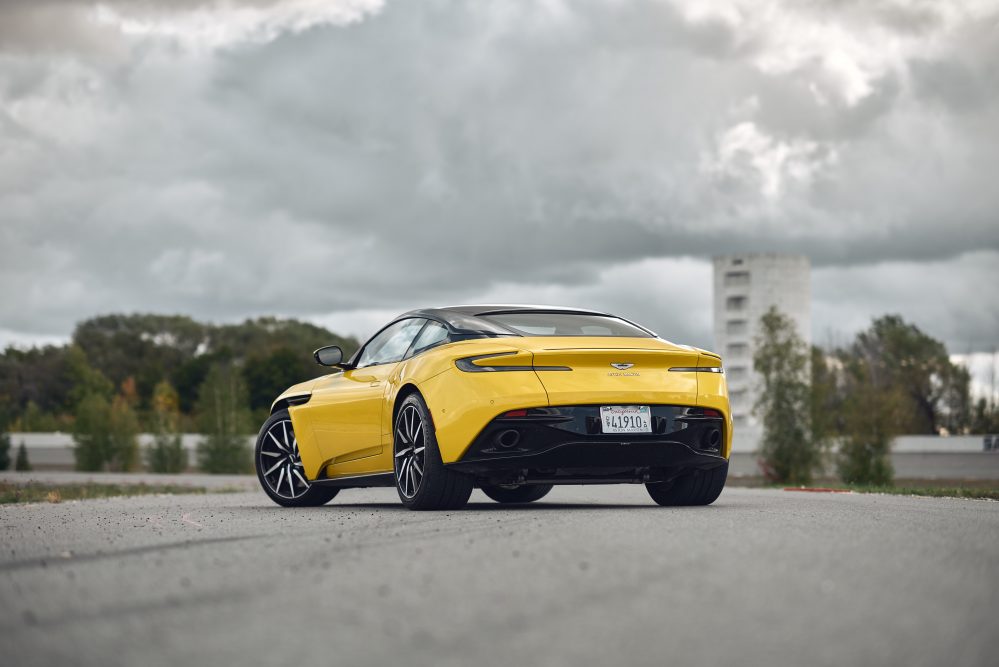 For many, the 2020 Aston Martin DB11 is viewed as the car that brought Aston Martin back on the map, but also the car that best represents Andy Palmer’s key involvments at the brand. Under Palmer’s administration, the next generation of Aston Martin’s flagship sports car would need to honor the company’s past, yes, but also help the entire brand step up onto a new era of high-end performance. In other words, if Aston Martin wanted to compete against the world’s best, it had to partner up with one of them. 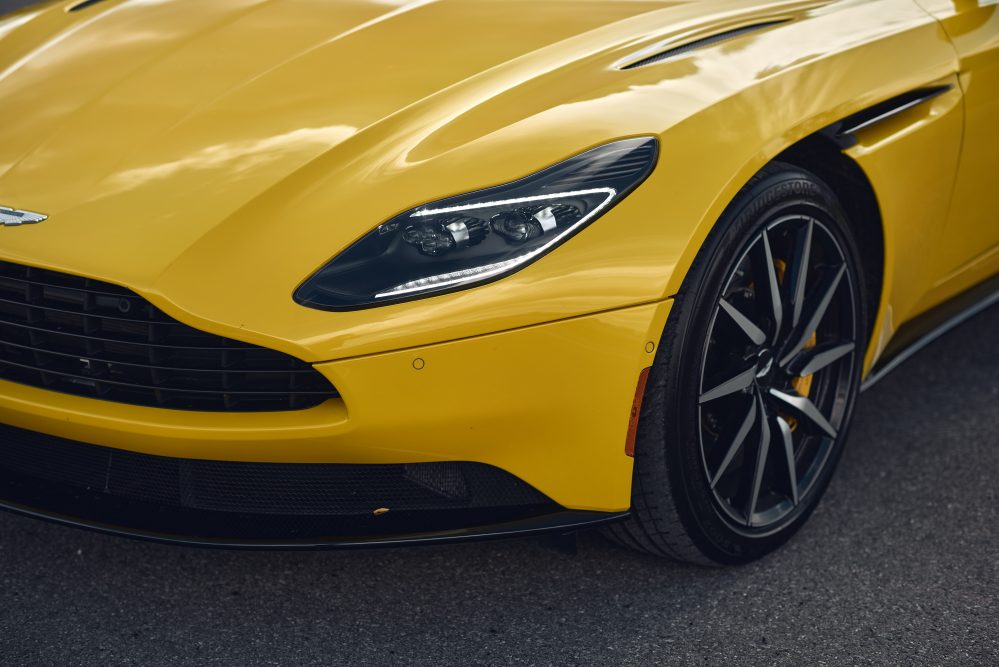 Andy Palmer no longer works at Aston Martin after a controversial decision to “boot” him out of the company when Canadian entrepreneur Lance Stroll acquired a large stake in the company. But during his short time at Aston, Palmer secured funding for the development of new products, heavily updated the assembly plants and took seriously cost-effective decisions. Andy also made a deal with Daimler AG, which resulted in Mercedes-AMG supplying Aston Martin in engines and electronics. The DB11 is essentially the result of that partnership. 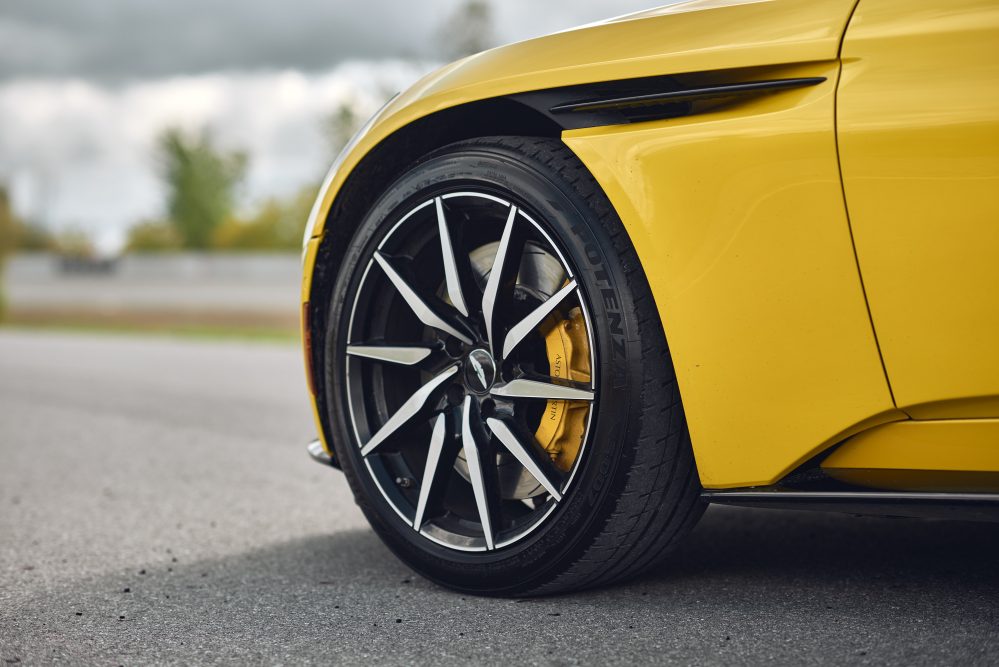 The car was designed by no other than Marek Reichman and rides on an entirely Aston-built platform that’s put together in Gaydon, England. The suspension and chassis are all tuned in-house, and the car’s default engine, a twin-turbocharged 5.2-liter V12, is entirely developed by Aston Martin. It’s good for a stunning 600 horsepower and 516 lb-ft of torque. 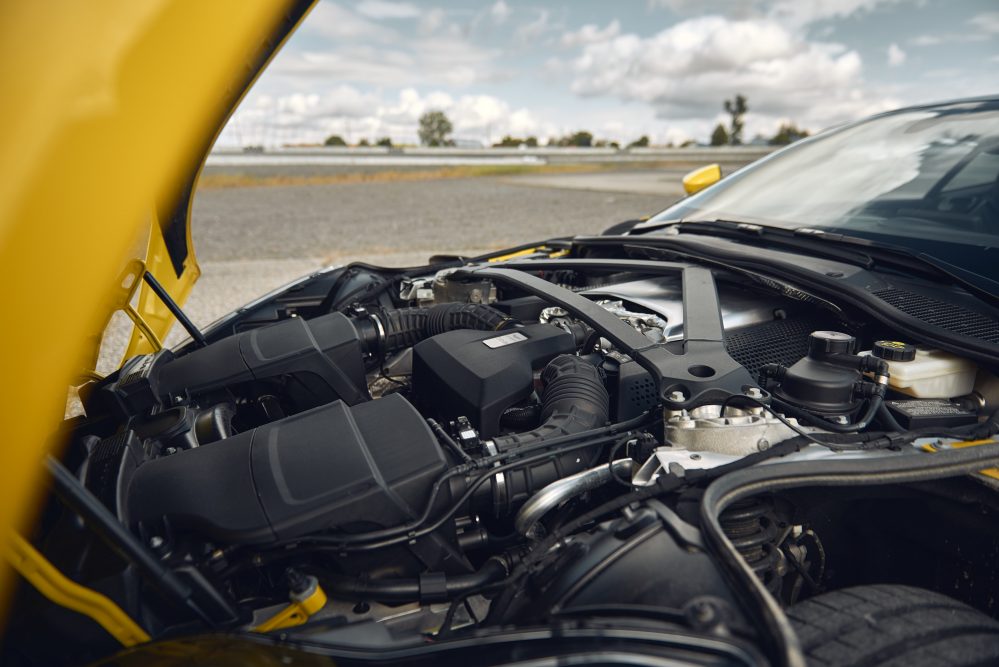 But the car featured here utilizes a more familiar twin-turbocharged 4,0 liter V8 taken straight out of Mercedes-AMG, an engine that currently powers the AMG E63 S, as well as the AMG-GT supercar and all its variants. It’s also the engine that powers the smaller, lighter Aston Martin Vantage. 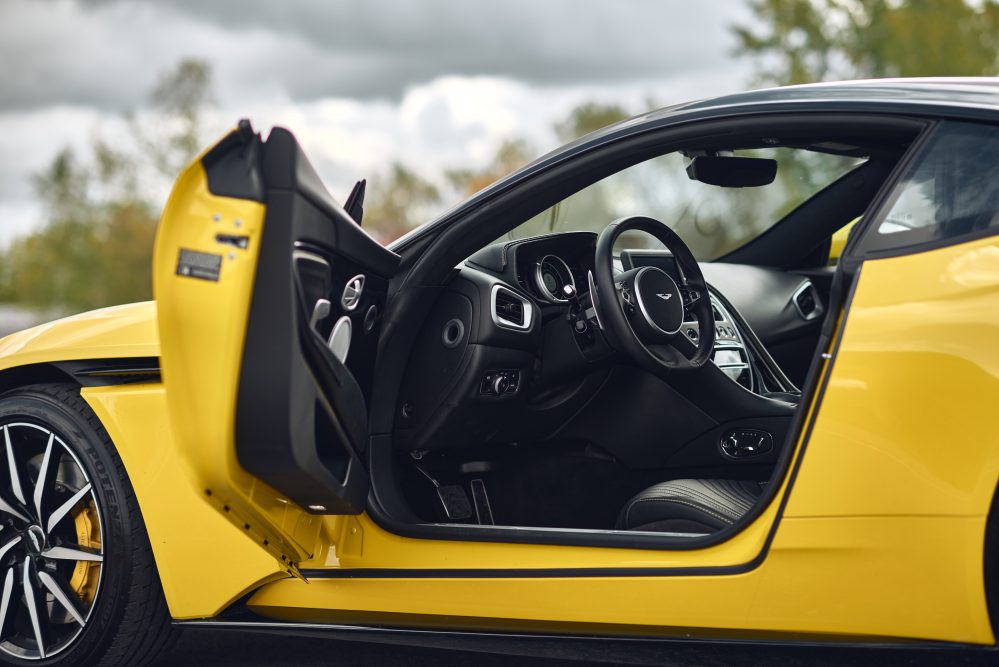 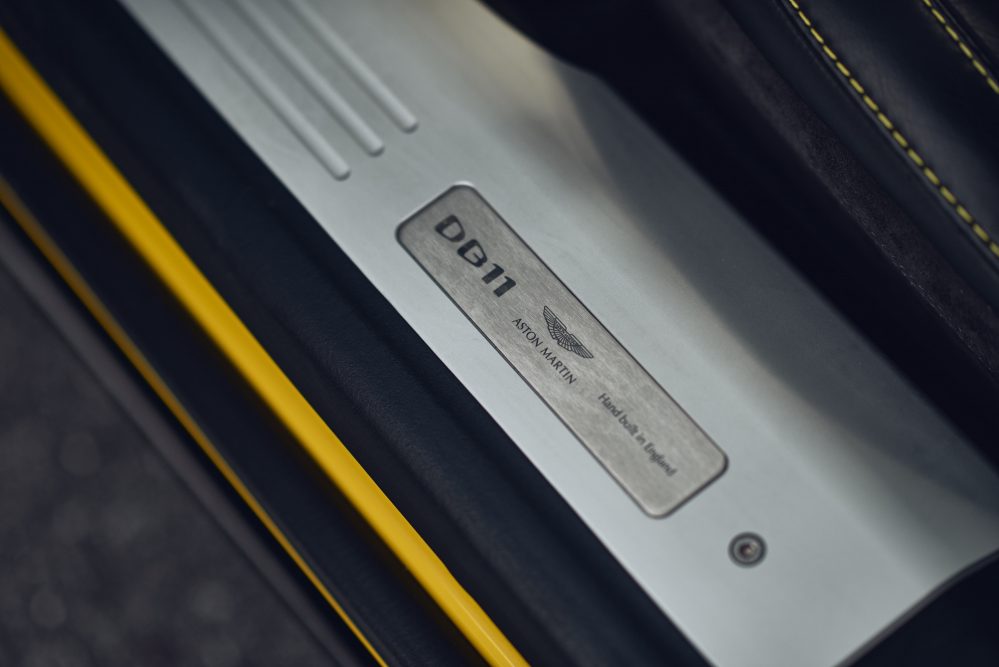 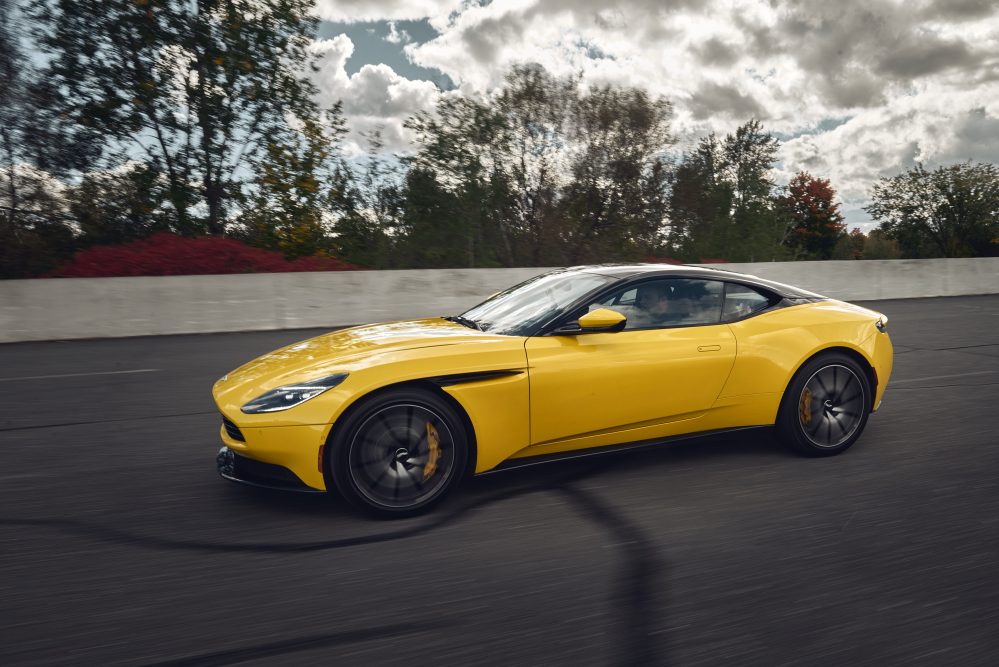 My time with this DB11 was brief, as it typically is when Decarie Motors throws me the keys to some Astons and Bentleys, but I did have enough time to drive it out of the city, sample its on road composure, and then bring it out on the track at Sanair Super Speedway for a few hot laps. 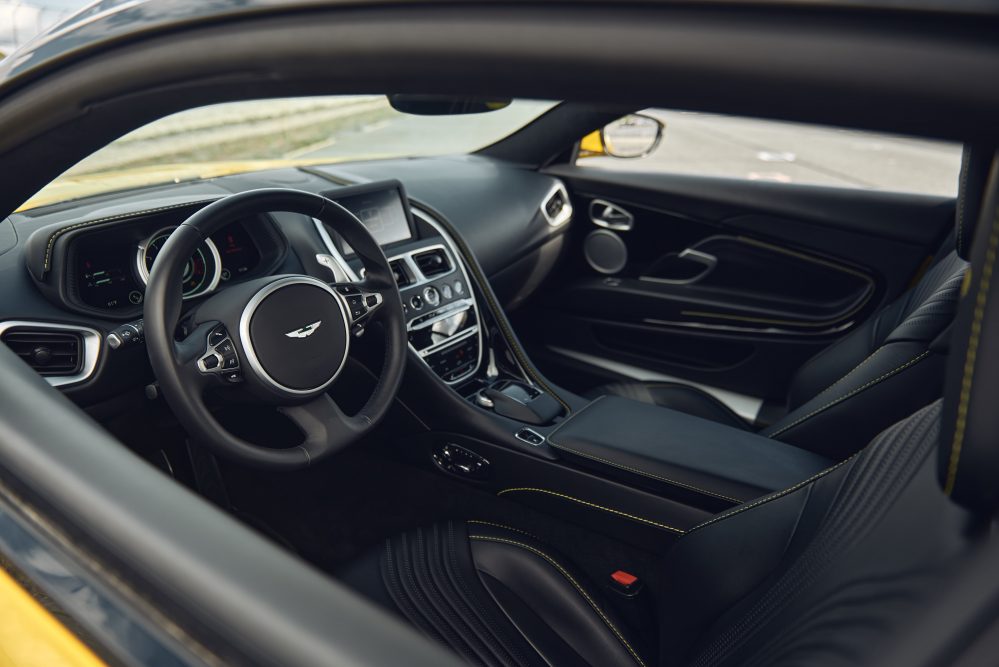 Like its V12 counterpart, the 2020 Aston Martin DB11 is still up there among one of the most pleasant grand tourers for driving out into the countryside. Its long wheelbase, wide stance and compliant suspension lead to a massively comfortable ride, one which wraps you up in pristine leather thrones and a classy, beautifully designed interior. 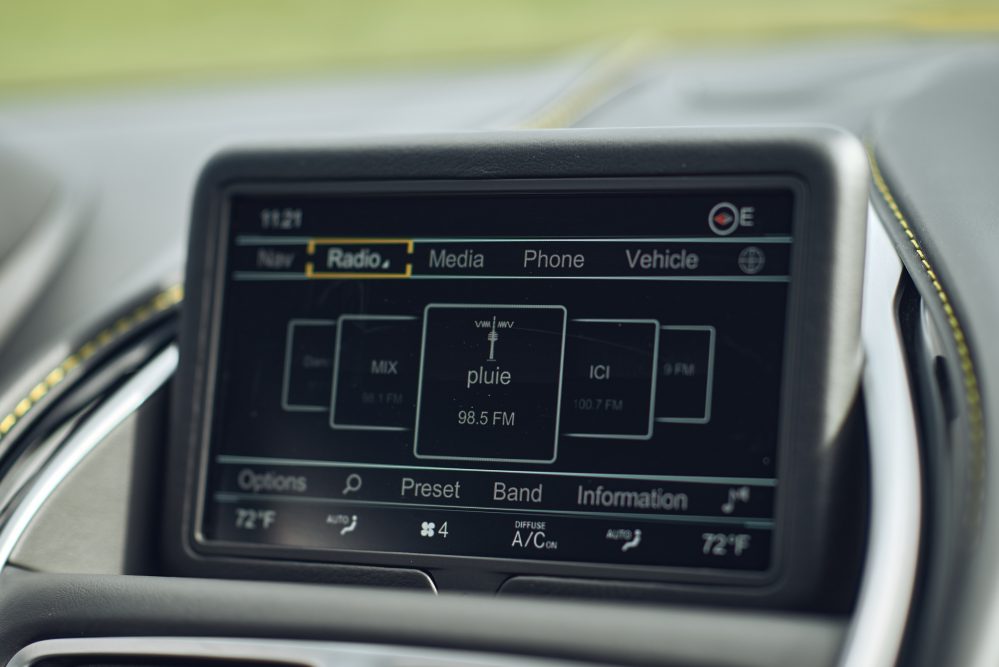 But I need to address the elephant in the room. The Mercedes parts bin special infotainment system – taken from last-generation Mercedes-Benz vehicles -, is not only a let down in a car of this caliber, but it also utilizes an unintuitive trackpad control layout, making it more distracting than useful. 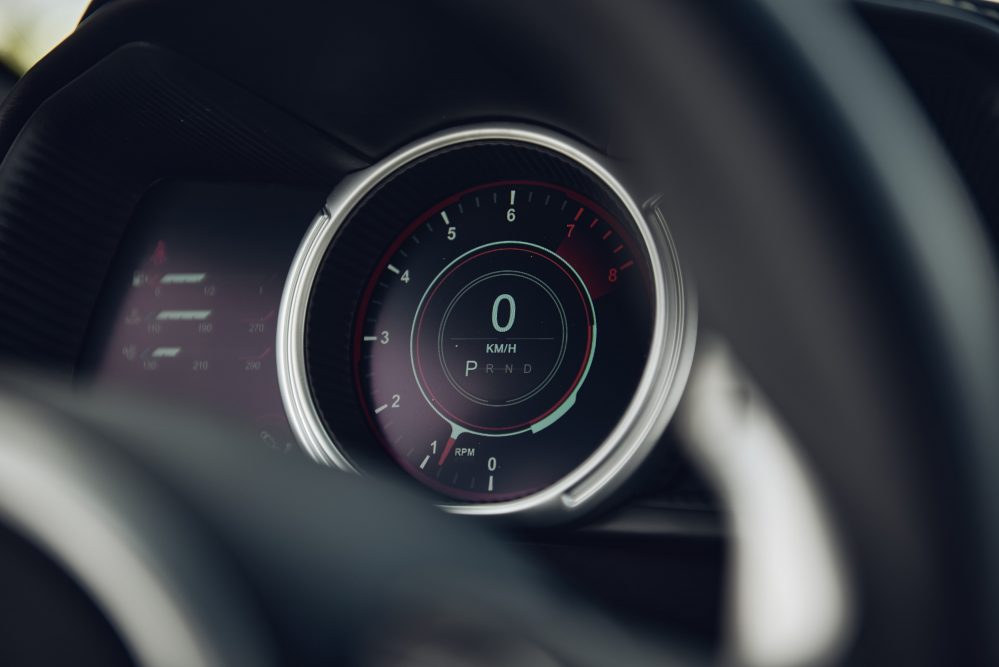 It’s the same story for some of the materials used. Don’t get me wrong though, overall dashboard presentation is attractive in a DB11, with a cool circular gauge pod design, and a driver-oriented cockpit layout, but some flimsy plastics are a disappointing sight in this price bracket. Turn the car off, and the “don’t forget your key” message looks and sounds as if it was taken straight out of an entry level Mercedes A-Class. 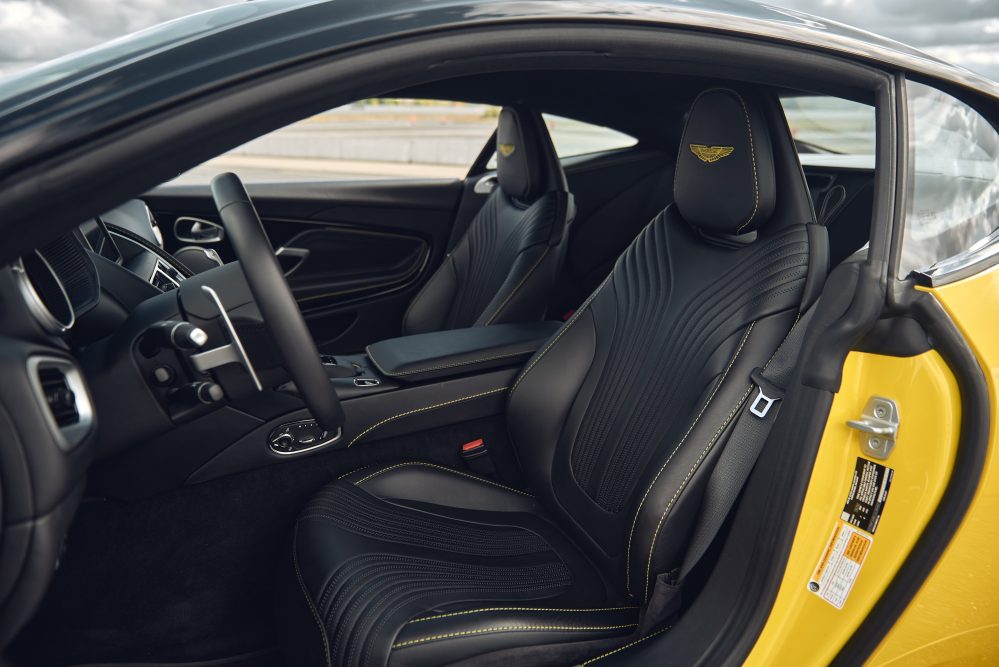 The seats look and feel fantastic though, especially with the yellow stitching and the Aston Martin logo embedded in the headrest. However, the seat adjustments located on the center console are just dumb, as they constantly jab you in the leg. There’s an organic feel to the way everything looks in a DB11, and the ride does feel exquisite, like you’re driving a truly special machine. I’m a personal fan of the PRND buttons located over the HVAC controls, with the Start/Stop button sitting in between. It’s a classic Aston Martin trademark. 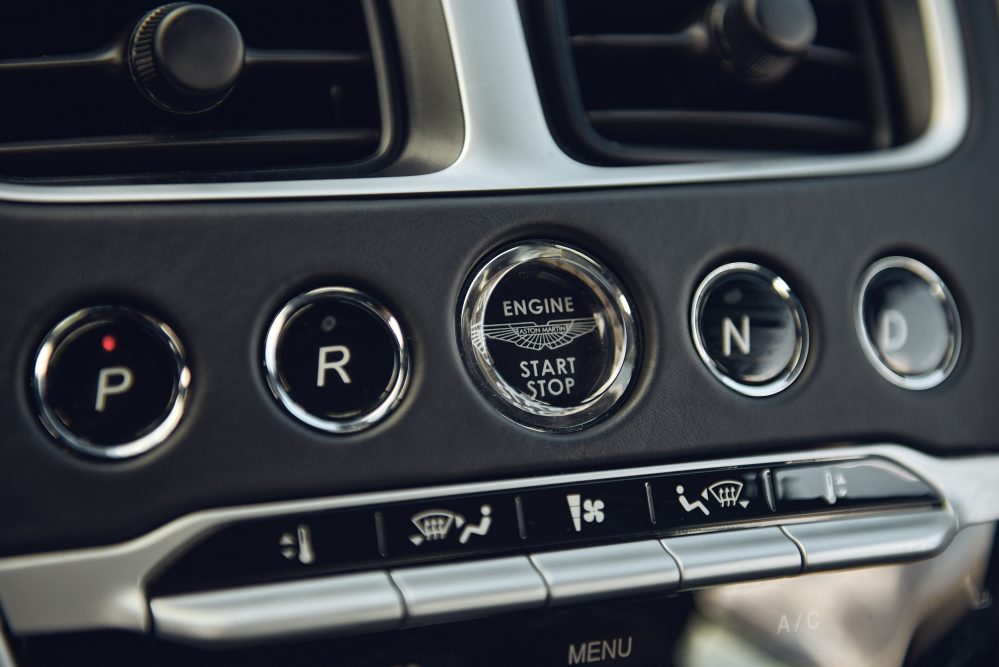 Like with with the V12-powered car, the DB11 allows you to independently adjust the car’s suspension, throttle response, transmission and steering. Two buttons are located on the steering wheel to let you either keep the car soft, but with an aggressive drivetrain setting, or vice versa. On Quebec’s beaten roads, the DB11 felt well planted and composed, absorbing bumps and holes in utmost class. 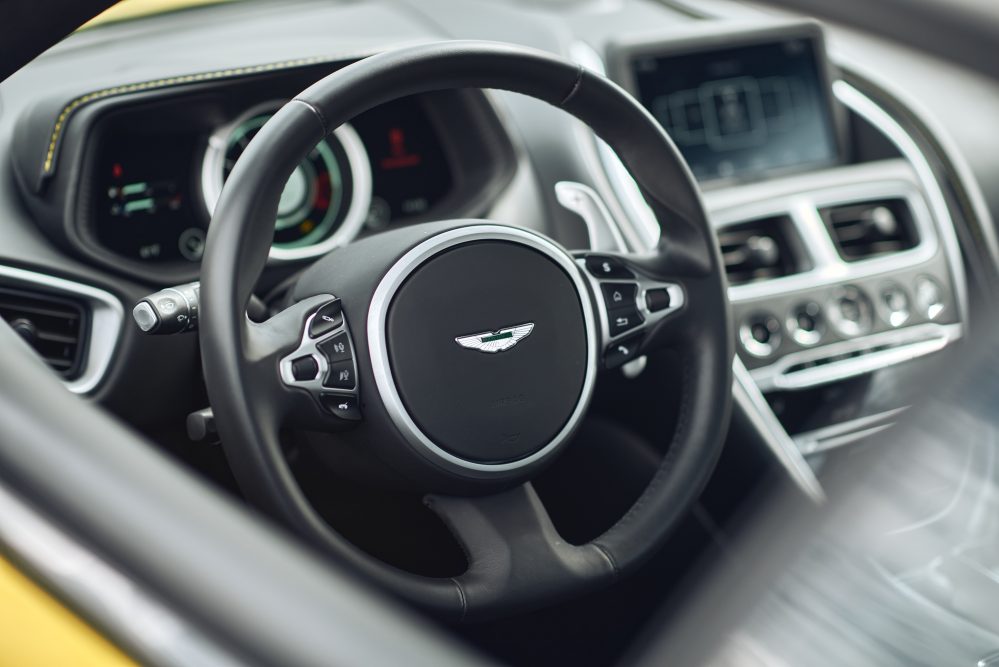 The V8 engine may not have the V12’s butter smooth low-end punch, but it packs sufficient thrust to get this big brash coupe up to triple digit speeds in a jeefy. It’s an engine that loves to rev, has almost no turbo lag and sounds absolutely colossal, with plenty of bangs and pops during downshifts. That said, the AMG soundtrack does dilute the DB11’s otherwise flamboyant character. 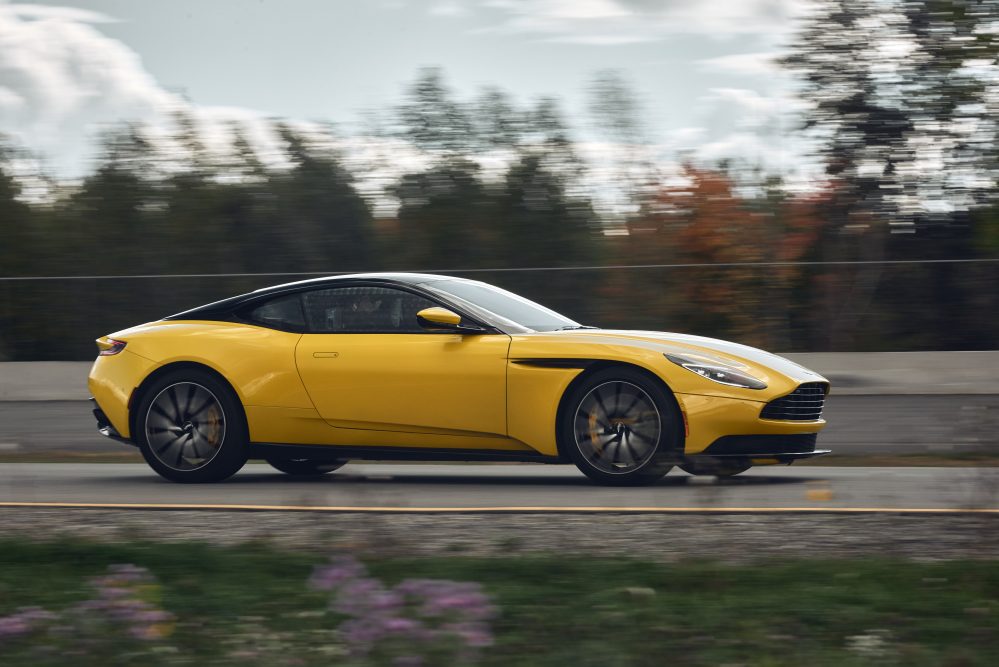 Out there on the track, the DB11 proved just as solid, but also felt long and a little soft, which makes sense because it was never intended to be a performance tool. I also happened to have an AMG GT-R with me during that test, a car I’ll be reviewing soon. Having both cars at my disposal revealed just how different they are, even if they utilize essentially the same drivetrain. The DB11’s single clutch transmission doesn’t rapid fire its way through gears as fast as the Mercedes, but the gear ratios are longer, allowing you to better exploit the available power. 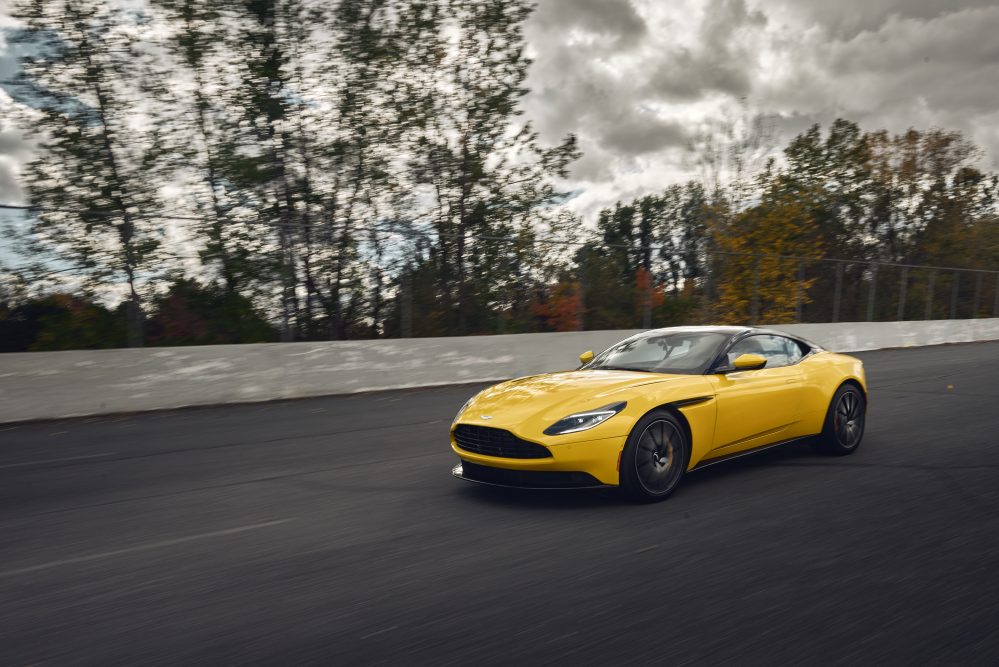 Yes, a DB11 V8 feels much nimbler due to the lower front weight, but also because the engine was pulled back towards the firewall, a technique also used in the AMG GT. Turn in is therefore a lot quicker than with the V12, and the entire car’s reflexes are a lot more immediate. It feels nimbler than a DB11 V12, but still more forgiving than an AMG GT. 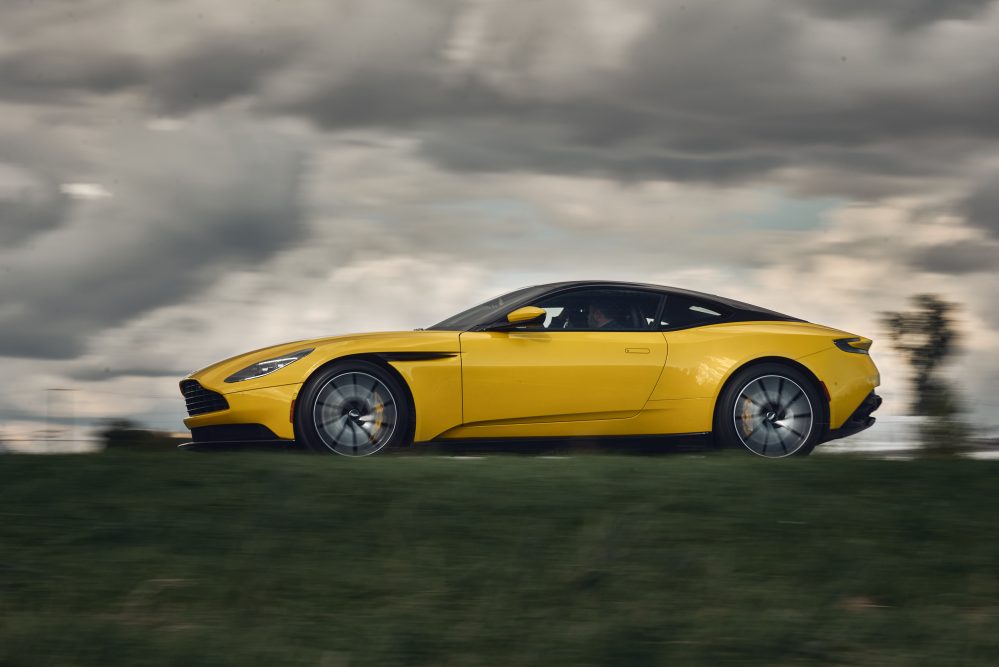 Yet, give it too much throttle at the right gear with traction control off, and this Aston will fire up its rear tires, allowing its driver to partake in graciously controlled 007-style powerslides. The level of balance here is absolutely astonishing. This Aston sure knows how to dance. 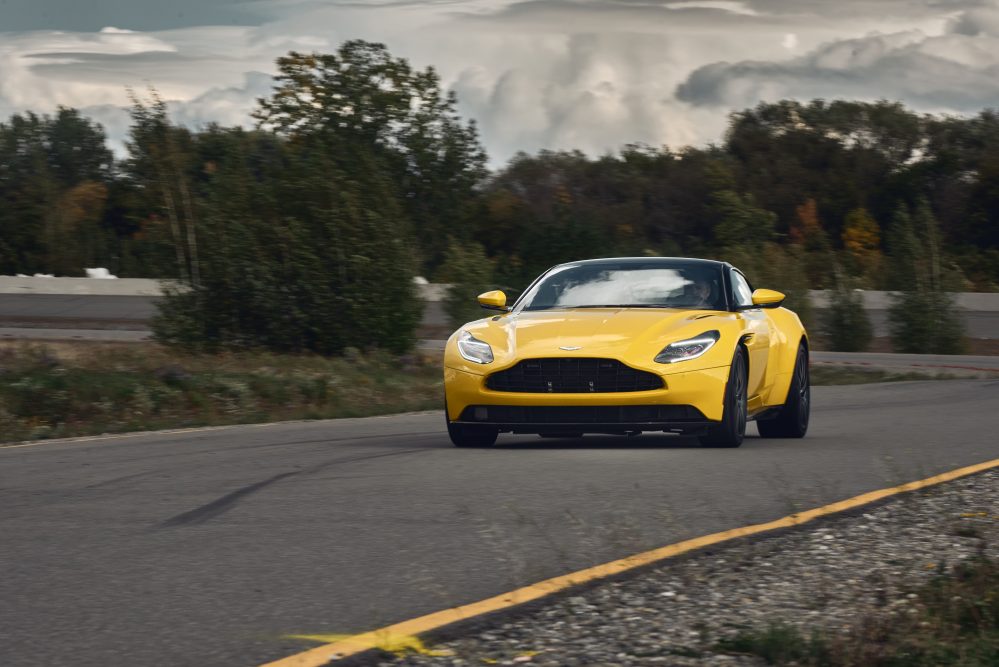 Perhaps the most obvious question is what kinds of cars the 2020 Aston Martin DB11 V8 is up against and, more importantly, if the $30,000 premium is worth it over an AMG GT R; a car that not only offers more power from the same engine, but is also considerably wilder and, well faster, all while having a more modern MBUX infotainment system. 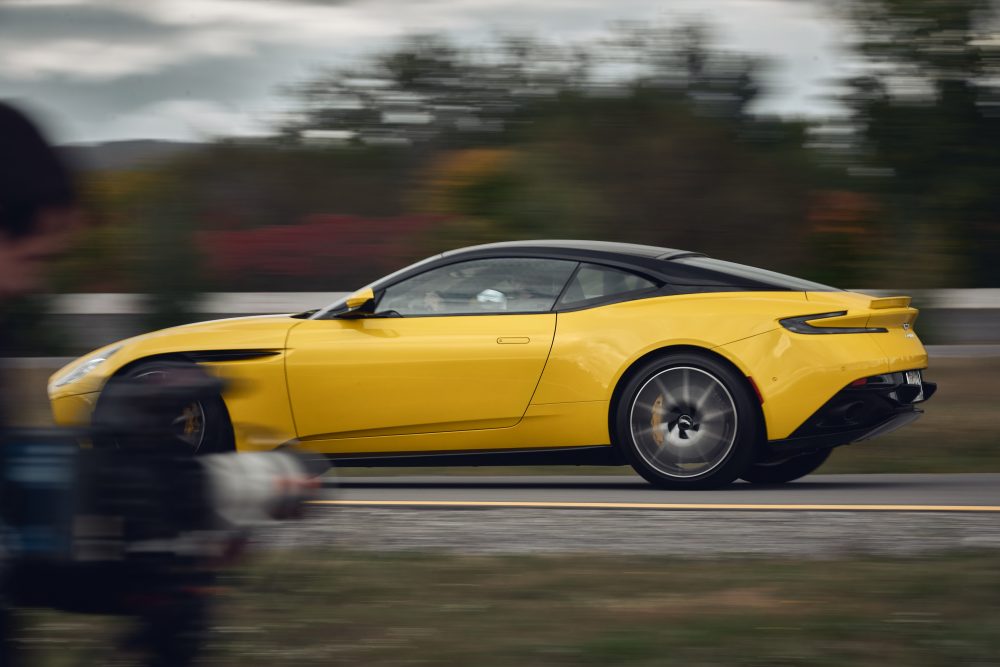 My answer to that is the following: one buys an Aston Martin for its exclusivity and presence alone. Very few cars have such an aura, let alone garner crowds. It’s a car that makes children dream and grown men weep. It’s an Aston Martin, the car James Bond drives, and in my book, that’s enough to justify the hefty price tag. But me, personally, I’d skip the V8 and go straight to the 12. Because let’s face it, while the V8 makes a compelling case for downsizing, the V12 is the one that better defines this car.