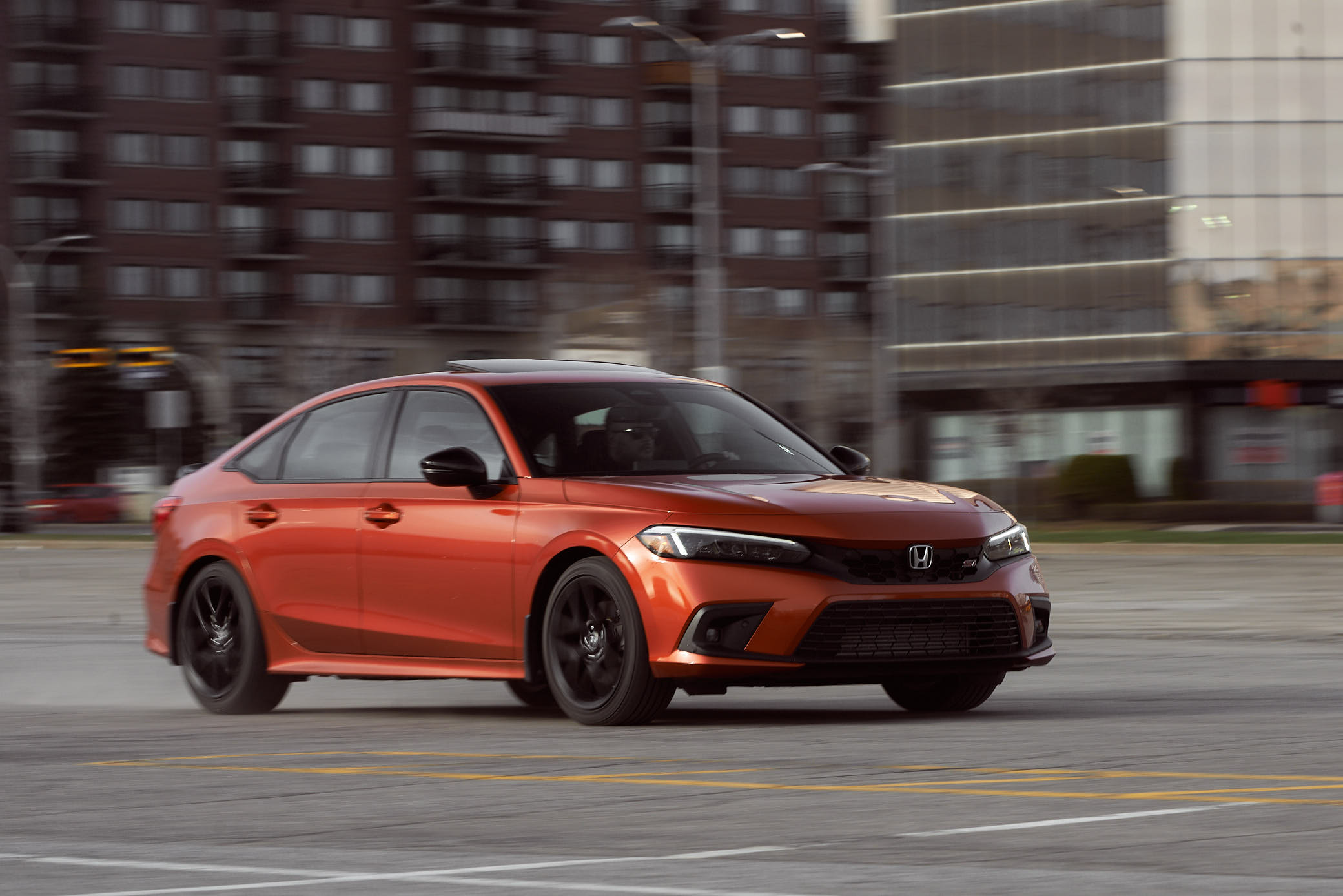 The 2022 Honda Civic Si keeps Honda’s Sport Injected promise intact. Because remember, the Si was never meant to be a Type R. It’s role is rather to be a street machine, a car that’s still a Civic but a tad sportier, quicker, sharper. And in that respect, this new car honors this tradition rather well. Yet, I’m still yearning for more. 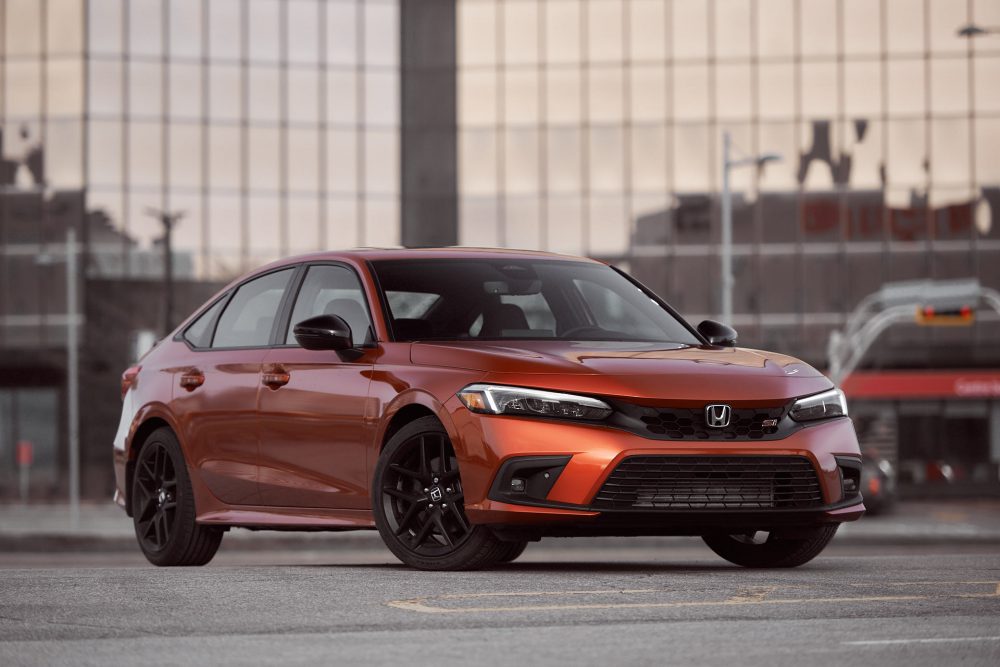 With the Civic Si coupe now gone, the Si treatment is exclusive to the sedan. Unfortunately, Honda doesn’t offer this drivetrain in the Civic hatchback. I mean, it does, but it’s called the Acura Integra for some reason. This means that except for the upcoming next-generation Civic Type R, you’re out of luck if you’re looking for an affordable hot hatch from the big H. 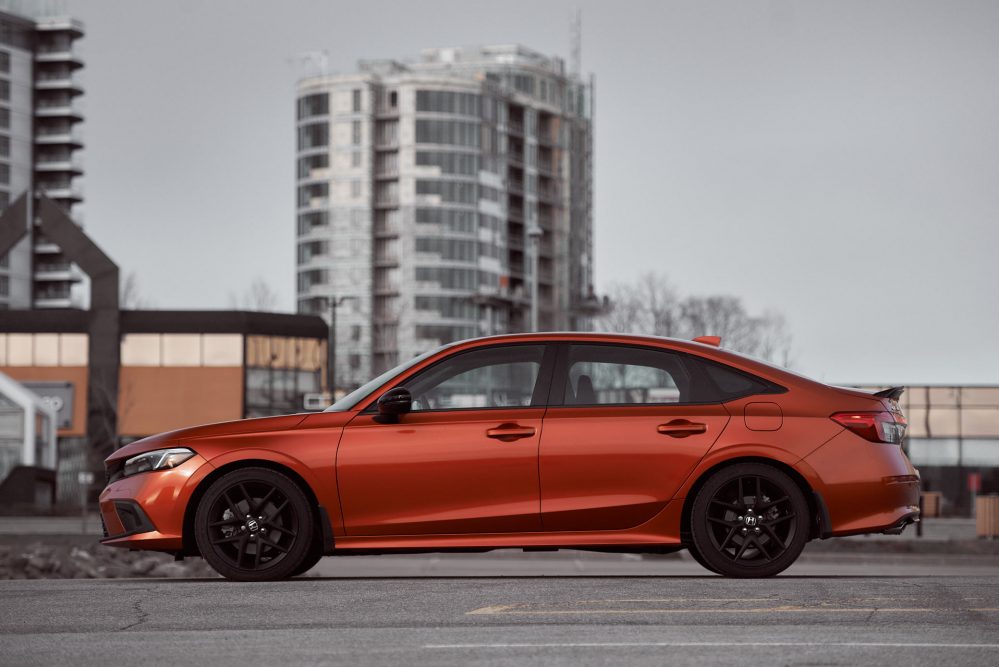 At least, the 11th-generation Civic sedan is a much more mature car now, appearing more like a budget Acura (why does it look like an Audi A3?) than a car your typical teenager would drive. And in Si trim, it goes about its business without attracting too much attention to itself. Except for the subtle Si logos here and there, a slightly sportier front bumper, different wheels and a tiny little decklid rear spoiler, you’d never know this is the Civic sedan’s ultimate form. 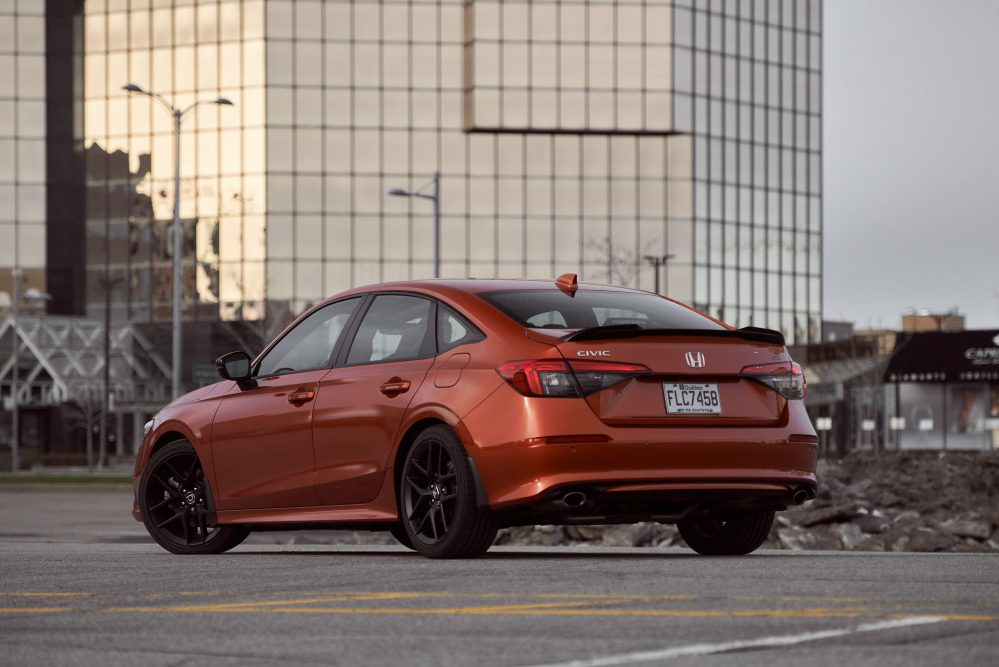 Of course, the twin exhaust pipes, which are real,  give away that something’s going on under the hood. Just like the old car, the Si is powered by Honda’s turbocharged 1.5-liter four-cylinder. What’s odd about this engine is that it now pumps out less horsepower than before, going from 205 to 200. Torque remains the same at 192 lb-ft. It gets ever weirder when you factor fact that this new Si is 46 pounds heavier than the old one. 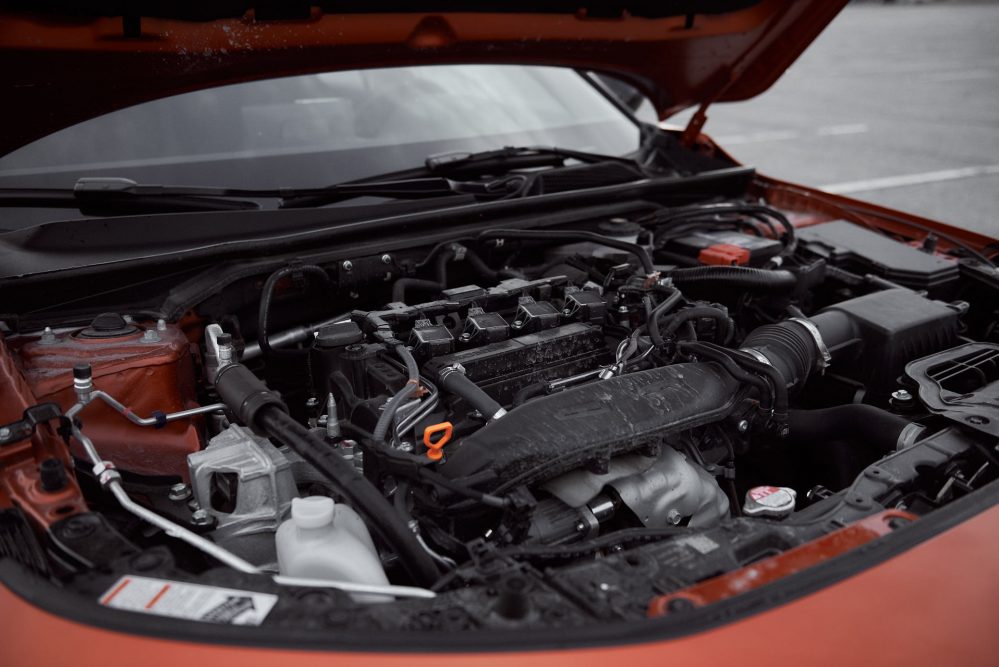 The thing is, Honda really hammered down on the details this time around. While technically identical, this new Si changes in several areas that matter. The first being chassis rigidity, which is increased 8 % in torsion and 13 % in flex over a standard Civic sedan. This Si also ditched the old shitty adaptive dampers that kept breaking in the old Si, and replaced them for a fixed default setting that’s unique to this car. Most of the car’s front end and steering rack were also sourced from the Civic Type R, as well as that car’s rev-matching system. 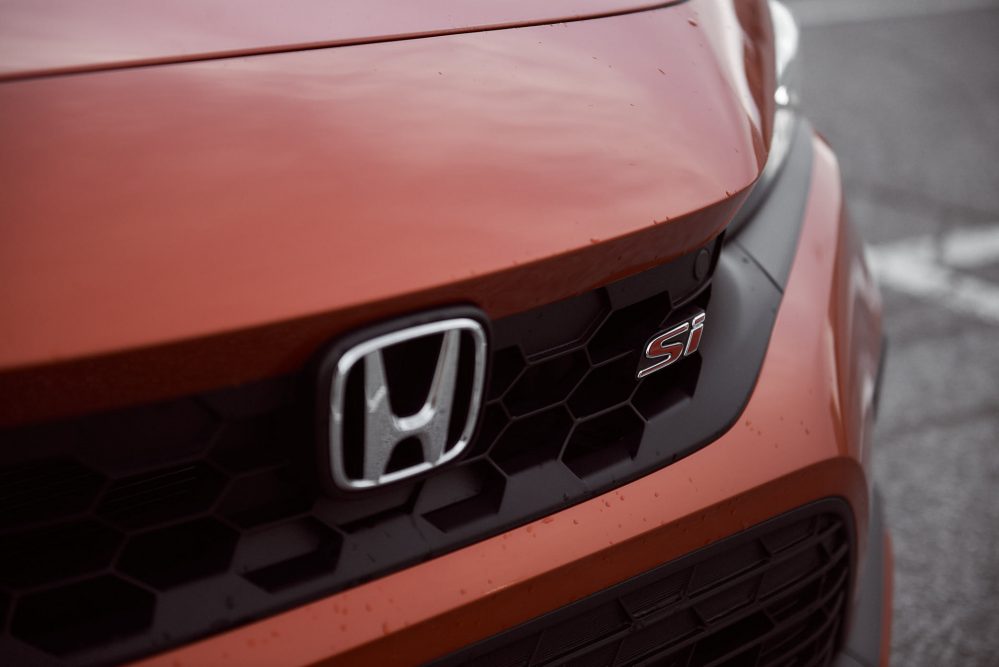 The engine itself is now lighter than before with the goal of lowering the mass of inertia. So is the flywheel to let that engine rev higher. Honda added 500 rpm to the redline, with peak horsepower now happening at 6,000 versus 5,500 rpm. Torque also kicks in lower now, at a much fatter 1,800 rpm. In other words, there’s much more powerband to play. 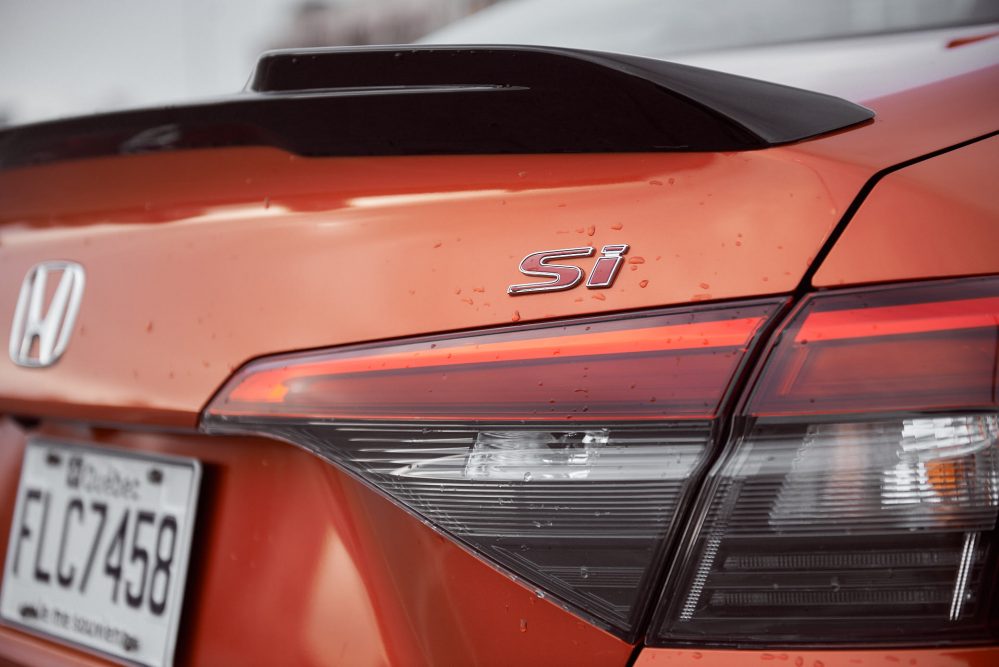 All of this is sent to the ground via a six-speed manual transmission and a mechanical limited slip differential. So yes, the Si remains a front driver and there’s no available automatic. Or the way all cars should be spec’d out.

Pricing for the new Si goes up a bit, but remains relatively affordable, allowing it to still be considerably less expensive than a Volkswagen Golf GTI. A Civic Si comes as is as one fully loaded model at $35,645. 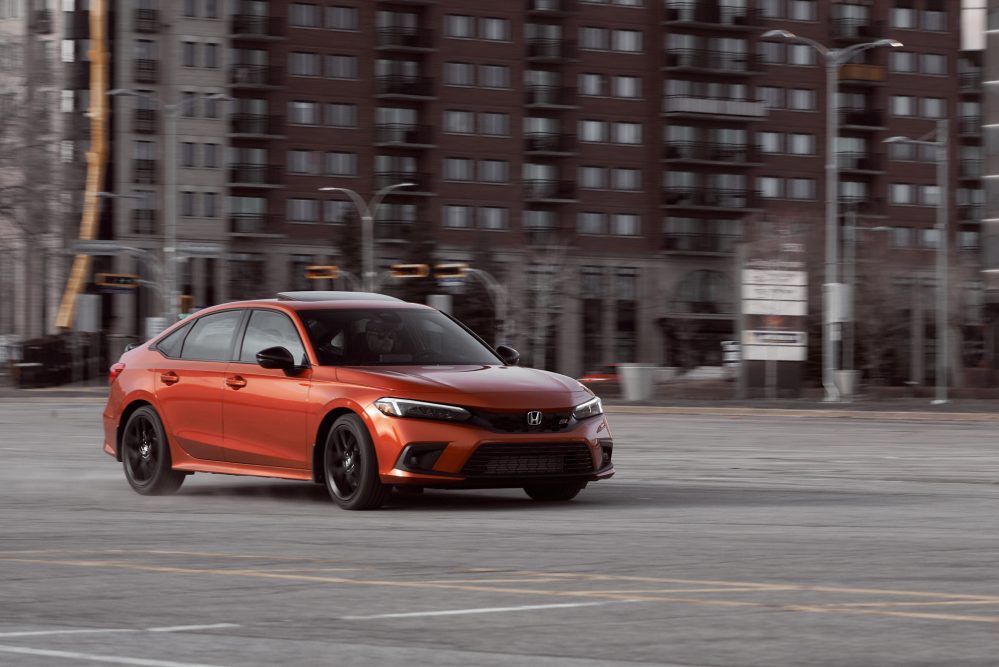 The reason I’ve always loved the Civic Si is that it does a bang up job of combining the daily drivability of a Honda Civic with the dynamic attributes of a sports car. In a world where everything is becoming ever more expensive, the idea of combining both worlds in an affordable package is rather appealing. 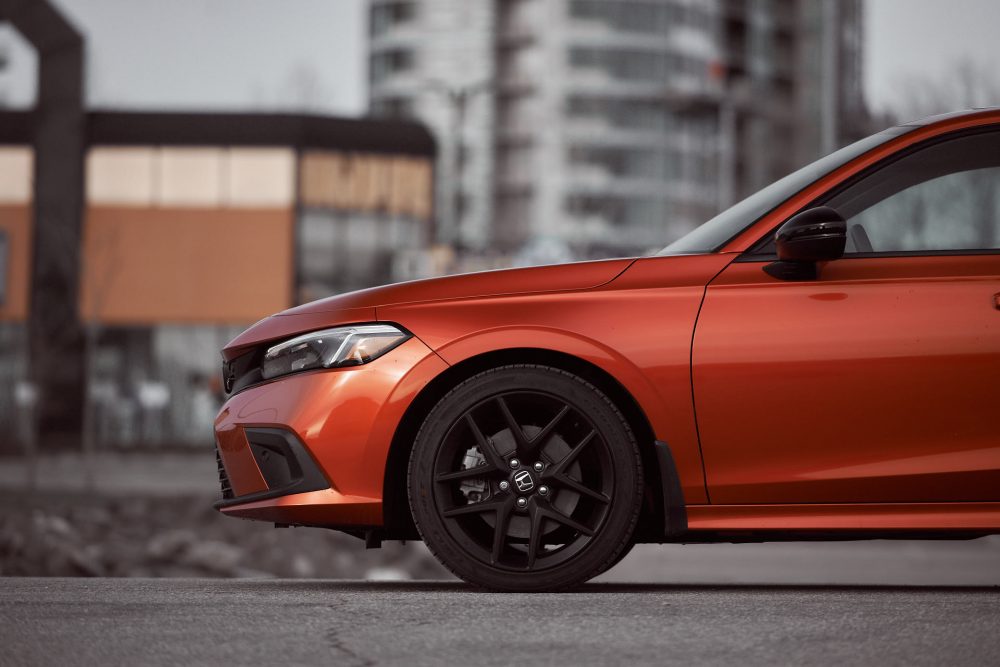 But contrary to, say, a Hyundai Elantra N-Line or a Kia Forte GT that feel more like upscale versions of the base cars, the 2022 Honda Civic Si’s driving dynamics lean more towards a true sport compact car. Throw this thing hard into a corner, and its firm chassis gobbles up the road while that differential takes care of tucking in the front end while you apply power. It’s the kind of stuff you’d expect from high budget sports cars, the kind of engineering wizardry that trickles down from the Civic Type R. 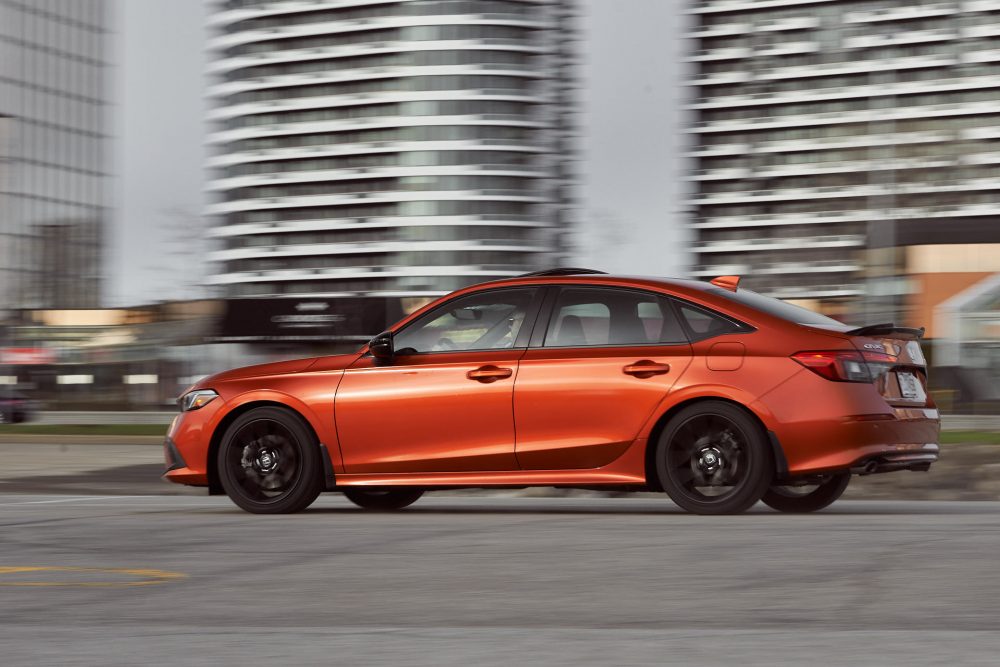 But perhaps the Si’s most endearing quality is its spectacular manual transmission. Honda has always excelled at this, and this hot Civic is no exception. The shifter itself is enjoyable to grab. It’s stubby and the throws are short and precise. There’s a sweet mechanical cog action in its operation that reminds me of the fun stuff Honda used to sell, like the S2000 or the Integra Type R. 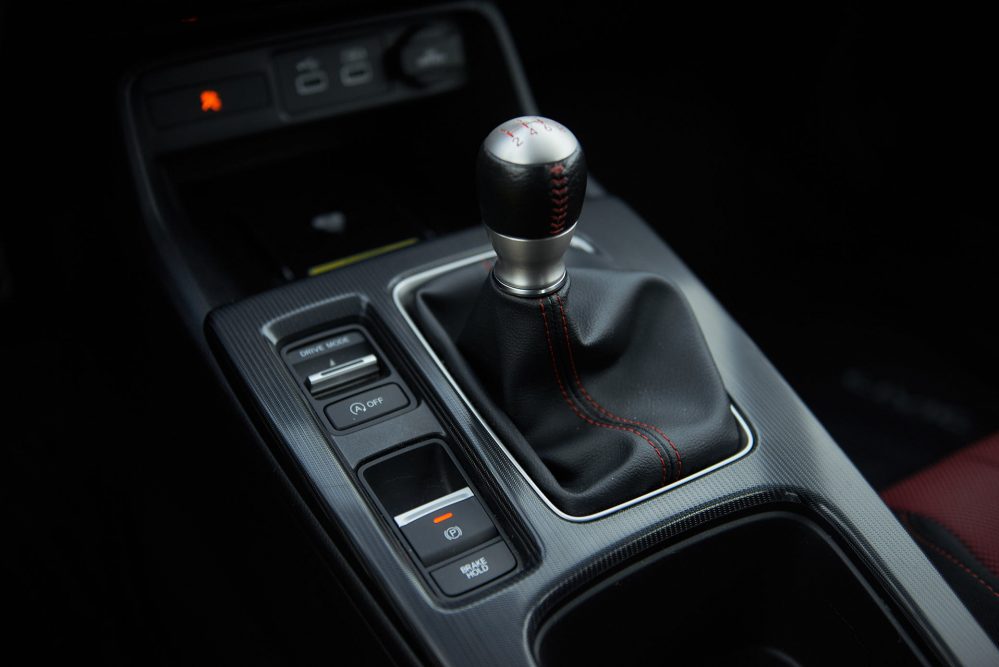 The 1.5T continues to be a charm, especially when pushed to its limits. The new powerband gives it much more personality than before. Torque activates low, with minimal turbo lag, but you’ll never really know there’s a turbo under there from how smoothly the power is delivered. Head up there towards the rev limiter, and it has a similar bark effect as the VTEC engines of yore. That’s because Honda has fitted this engine with VTEC valve timing technology on the exhaust valves. 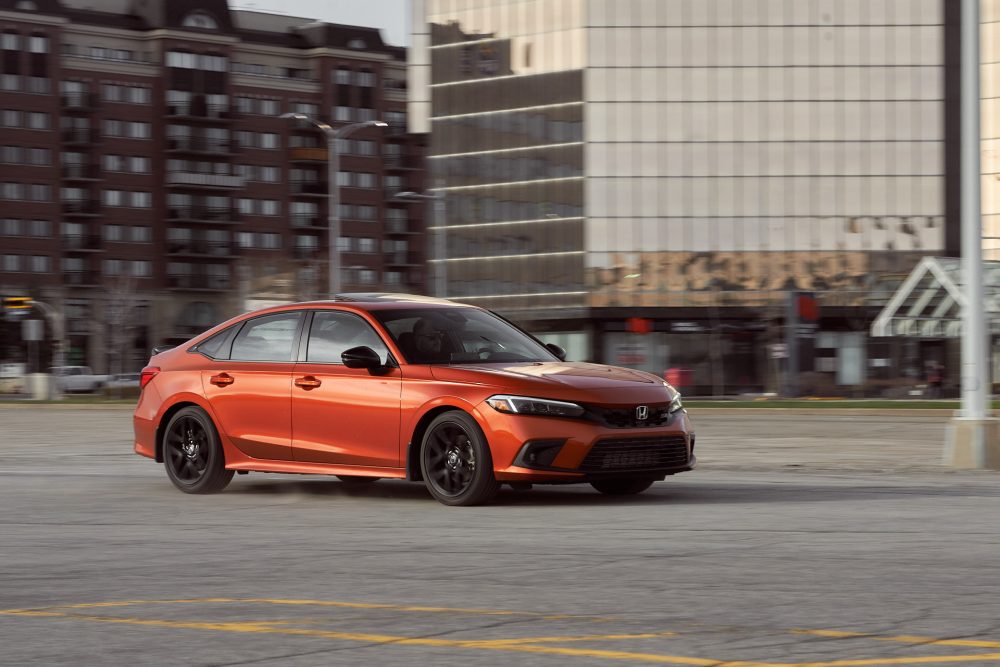 That all being said, that engine, as good as it is, feels low on power now that faces newcomers like the MK8 GTI or the Hyundai Elantra N. Honda could have bumped this to 220 horsepower for shits and giggles. 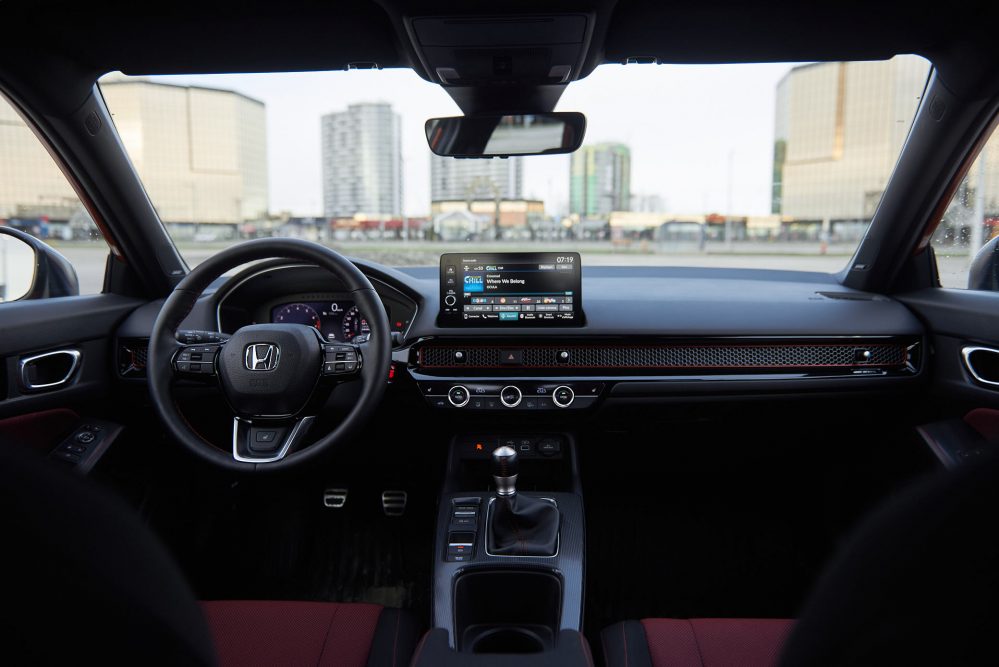 When you’re done peeling the front tires exiting runabouts, the 2022 Honda Civic Si becomes a comfortable Honda Civic again. Those dampers were calibrated at the sweet sport between too firm and too soft. The Civic also feels much more like a high quality item than before, eating up road imperfections as if they never existed, with an NVH level that’s finally comparable to a Volkswagen. 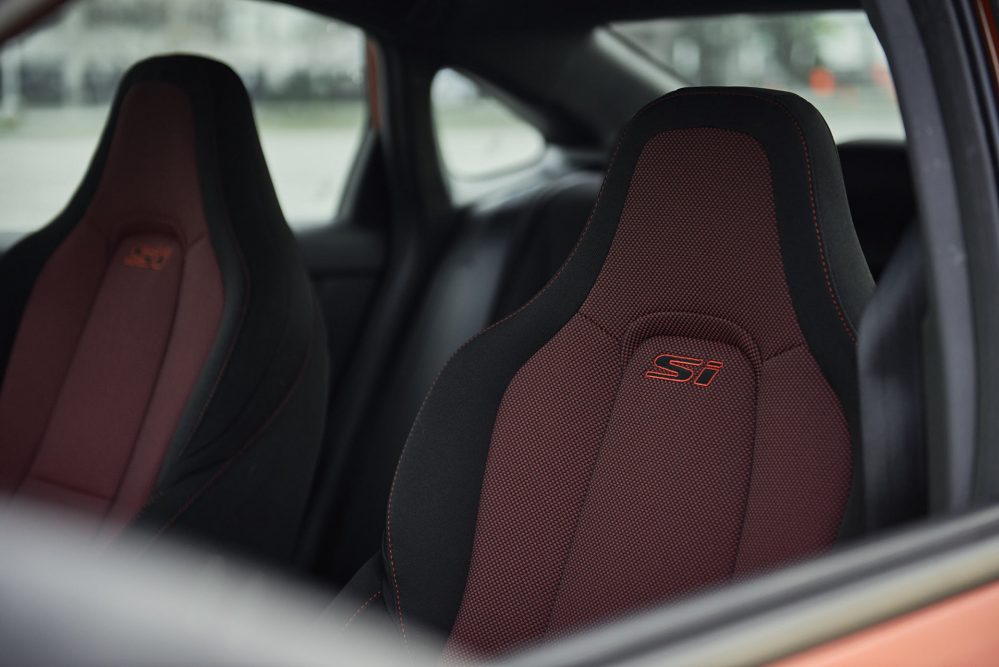 The seats not only look good, they feel good too when you strap yourself inside. There’s great lateral support even for wider drivers like yours truly. The clutch pedal is light, making it super easy to operate all the time. And while the steering wheel never provides any form of feedback, it’s an enjoyable part to grab due to its thickness, shape and the materials used to cover it. 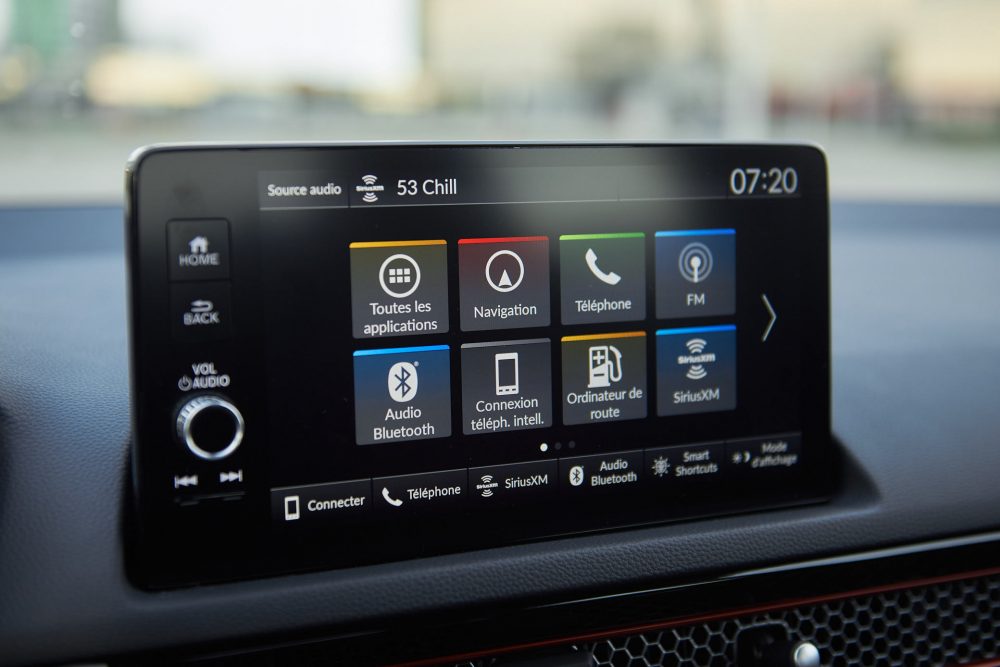 Ergonomically, the Civic is hands down up there among the best in the segment, with clean and easy to read digital gauges that allow the driver to customize the displayed information. I preferred going with the classic, just gauge layout, clearing up the otherwise busy cluster. Even the infotainment system works now thanks to a large physical volume knob, as well as clear, easy to grasp menus. I do wish there was a second circular knob like in the Accord though. 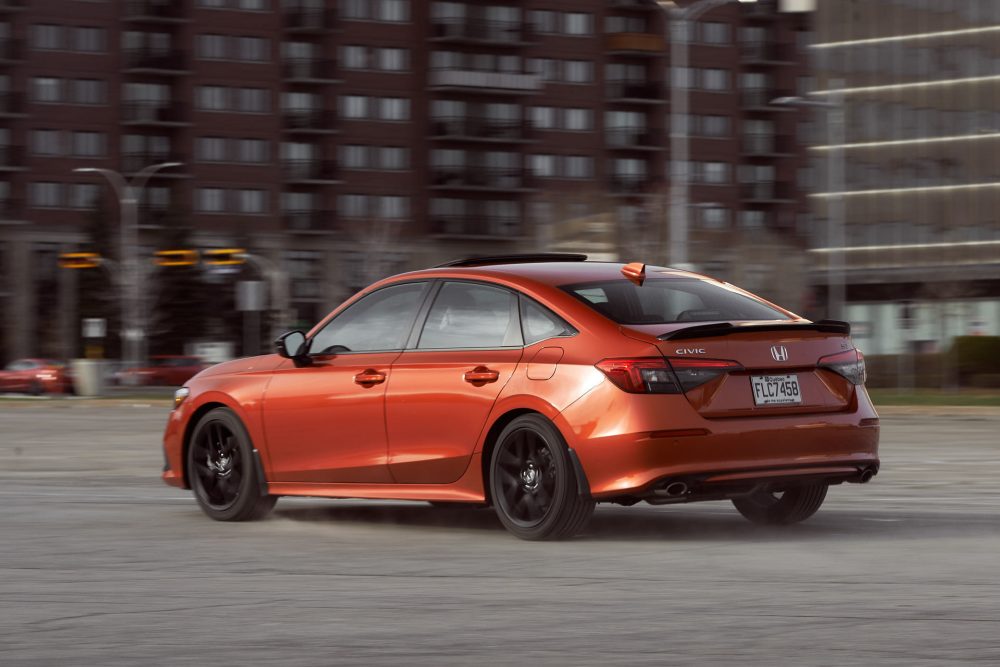 The 2022 Honda Civic Si is still very much a Civic Sport Injected. It’s massive fun out on a winding road, its mechanically well sorted out and it still remains an easy to live with compact car. Considering how affordable it still is, I can safely say it’s still up there among the best sport compact cars currently on sale. But if it were up to me, it’ll have about 20 more horsepower to truly hold its own against a new generation of hot compacts.