2022 Hyundai Elantra N Line Is The Sweetspot Of Cheap Performance 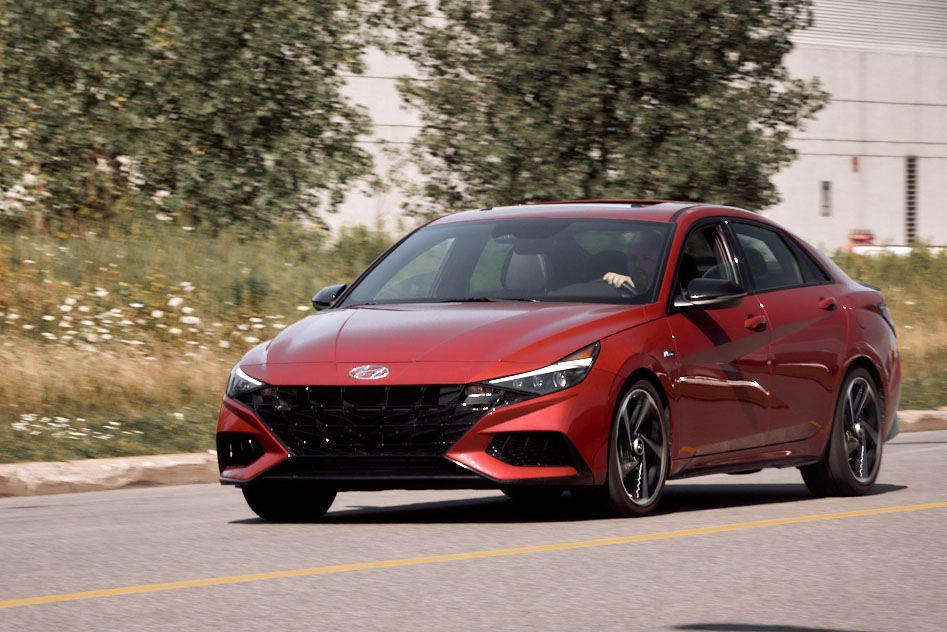 The 2022 Hyundai Elantra N Line is a fantastic example of a fun car sold at a decent price. If you’ve been following this blog, you’re well aware that I’m a huge fan of cheap performance. I had also absolutely adored this car’s predecessor, the Elantra Sport, precisely for that reason. The second-generation car ditches the Sport designation, replaces it with the N Line name and gets a super weird design language. The good news is that the fun factor and cheap price tag haven’t gone anywhere.

Not Sure If Hot Or Not 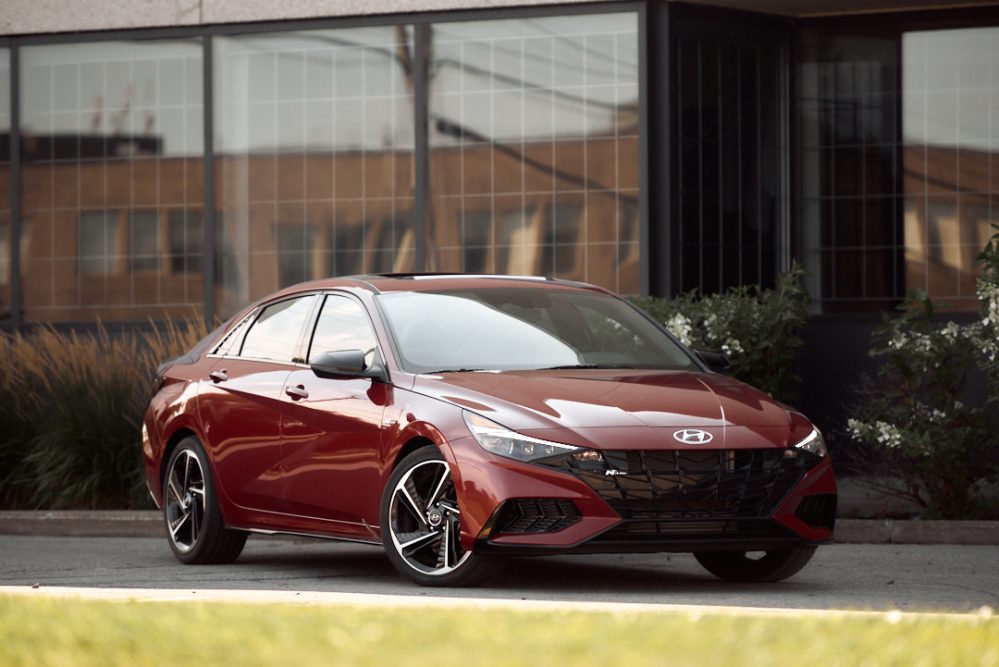 I’m still not sure what to think about the 2022 Hyundai Elantra’s styling. It does seem to look nicer the more performance toys get grafted onto it. This mid-performance N Line looks fine when you compare it to the god-awful base and hybrid models. And when I drove the full-fat Elantra N at Sonoma last fall, I had said that it looks like the car’s final gestation. Because it actually all works. 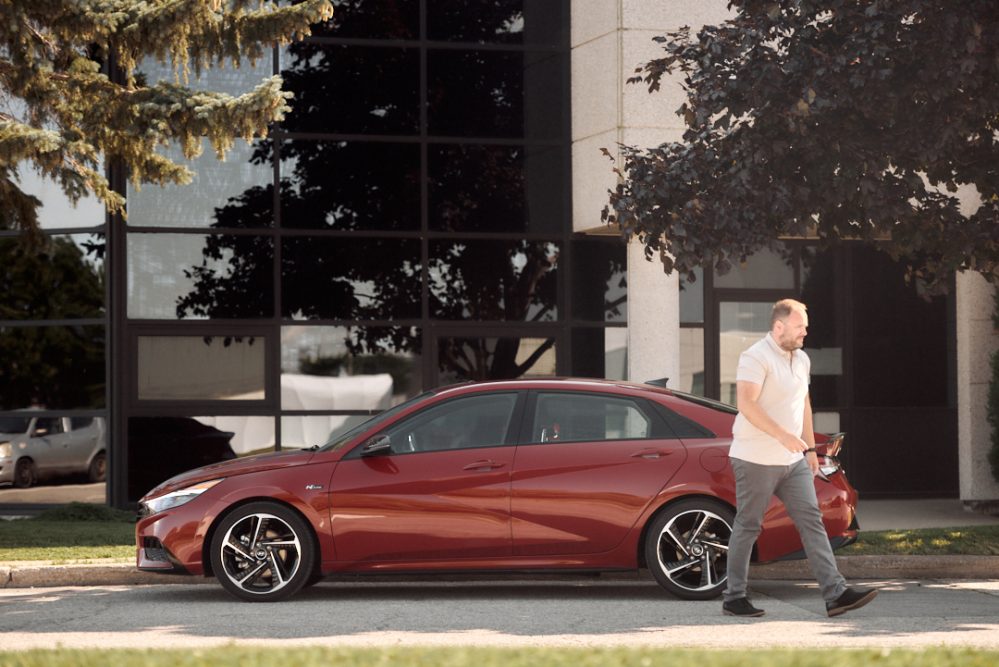 There are two problems with the new Elantra’s design. The first being a mashup of intersecting lines that sometimes lead to nowhere. The second is the long overhangs, especially up front. What you need to spice this car up are big wheels, big brakes, bright colors and plenty of aero upgrades. That’s why in N Line form it at least looks not bad. I also totally dig that integrated rear spoiler on the trunk. 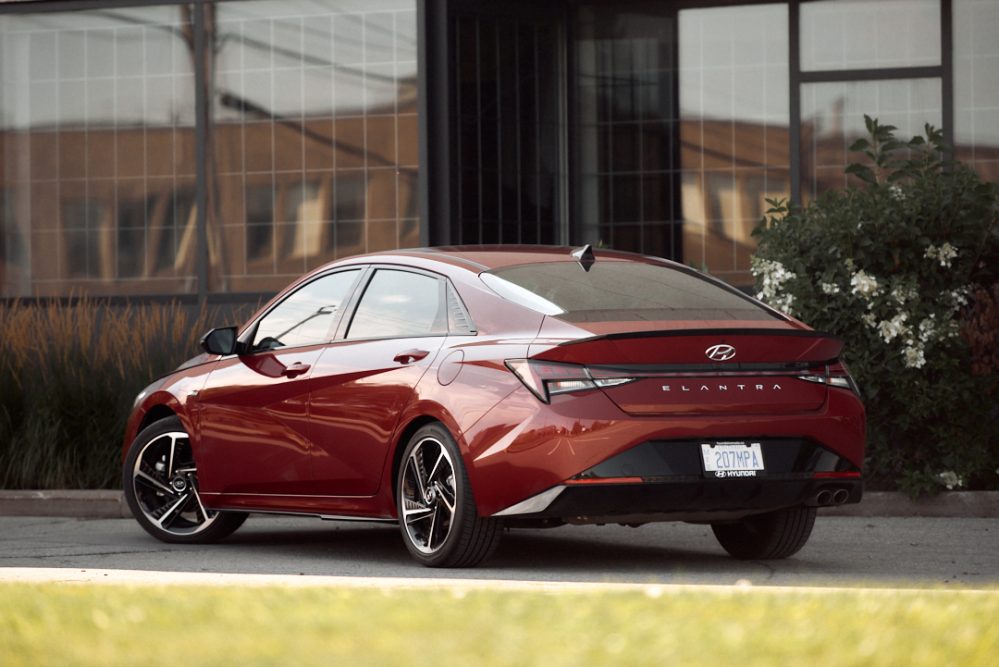 Weather you appreciate the Elantra’s odd styling or not, you’ll most probably enjoy the overall package for the price. While it looks all new, its bones are actually carried over from the last-generation car. The engine is therefore the same turbocharged 1.6-liter four cylinder as before, with an identical 201 horsepower and 195 lb-ft of torque on tap. Yes, that’s the engine that also powers the Kia Forte GT. 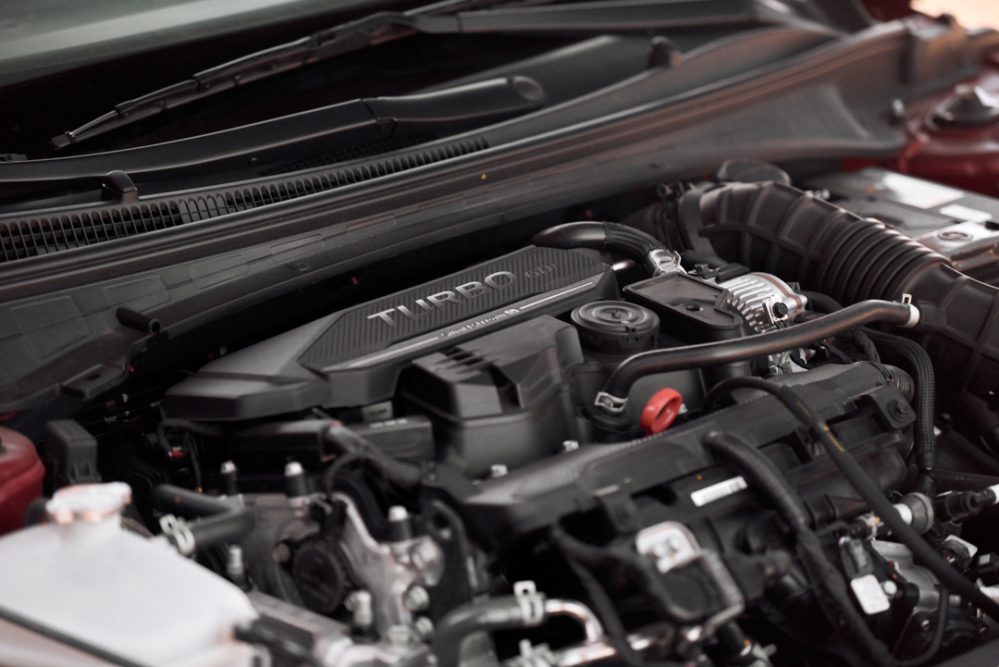 However, unlike its corporate sibling, which can be paired to a six-speed manual transmission, the Elantra N Line is now only offered with a 7-speed dual clutch automatic here in Canada. And that’s a serious piss-off, because one of the reasons I adored the old Elantra Sport was due to its no nonsense stick-shift gearbox option. I blame woke millennials who don’t give a fuck about driving for this tragedy. 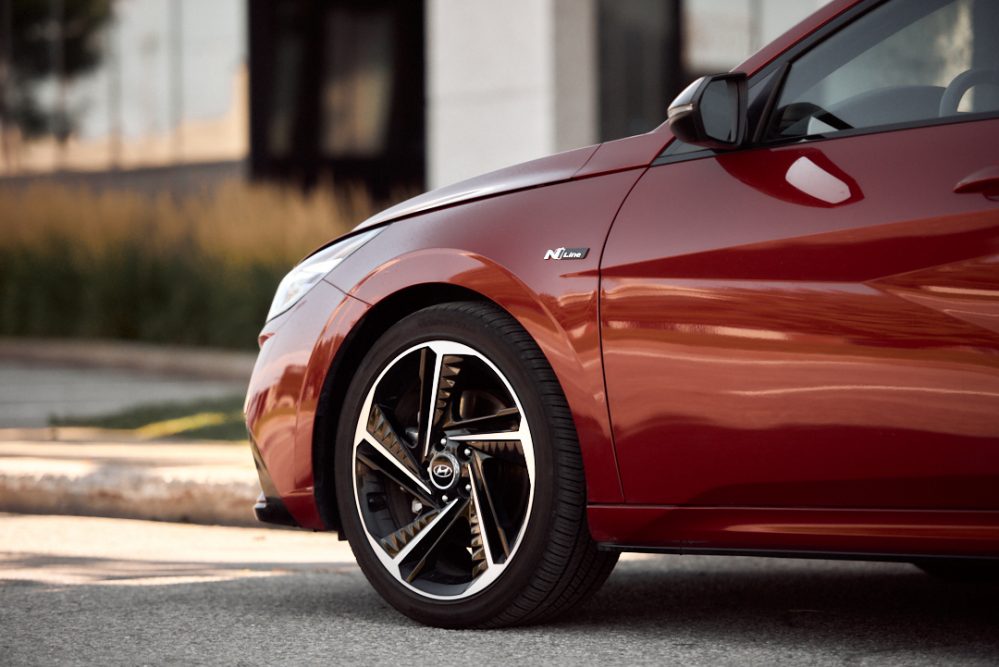 At least the price is totally right. There’s really only one trim level, which comes fully loaded at a very decent $27,799. The only options are paint colors, like my tester’s $200 Ardent Red. This allows the Elantra N Line to be considerably less expensive than a Volkswagen Jetta GLI and the new Honda Civic Si, which I’ll review soon.

This Thing Needs A Stick 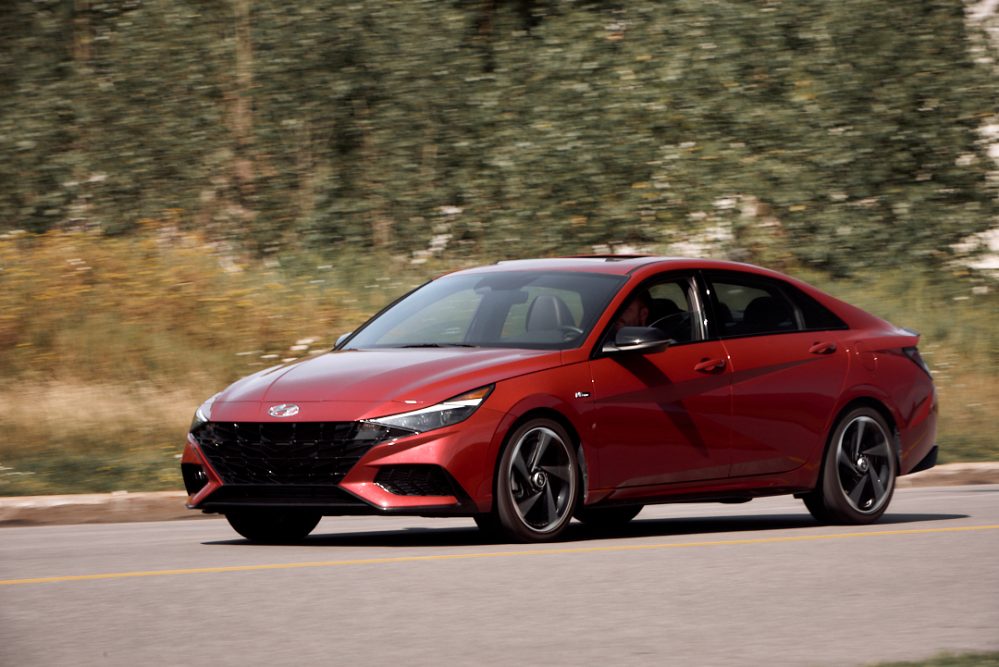 I know I’m annoying with the whole manual transmission stuff, but this is a good example of a car that should never had gotten rid of it. I mean, sport compact sedans are already a niche product anyway, so how on Earth did Hyundai figure out that its removal would help the car’s sales? It’s even more painful when you know that its Kia twin gets the stick option and that both the Jetta GLI and the Civic Si also get one. As a matter of fact, the Civic Si only comes with a manual. 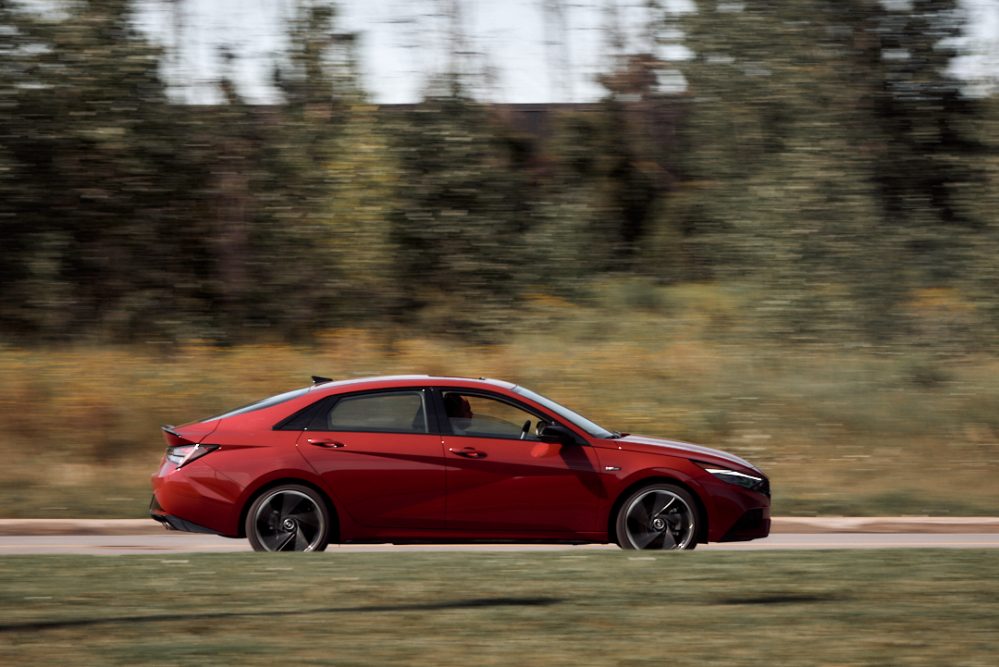 So, to its defense, that dual-clutch unit isn’t all bad. It’s definitely not as smooth or efficient as what the Germans will sell you, but good enough to be considered over the manual if shifting for yourself ain’t your thing. The problem with this transmission is that in only works well when you’re pushing the car hard. In a normal driving scenario, it tends to lag and be rough around the edges. 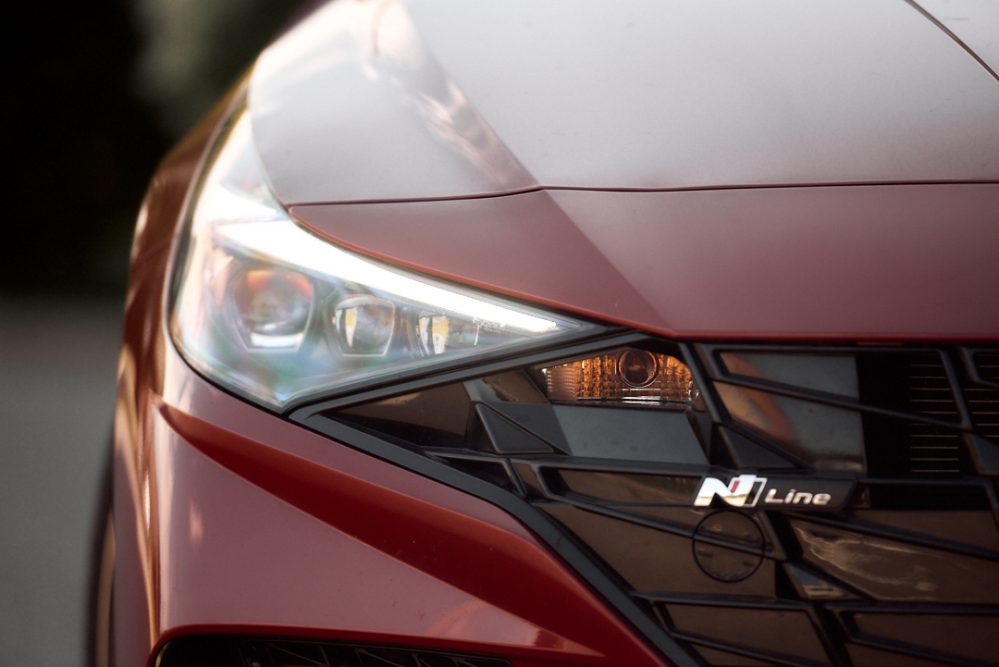 I do enjoy the pleasant soundtrack from that little engine though. It doesn’t bang or pop like the Veloster N, but that 1.6-liter unit has a personality of its own, humming with confidence in the background. There’s a lot of low-end torque too, and most of the power runs out past 5,000 rpm. So it’s all happening in low to midrange areas of the tachometer, which means you don’t always need to drop a gear to get her moving. 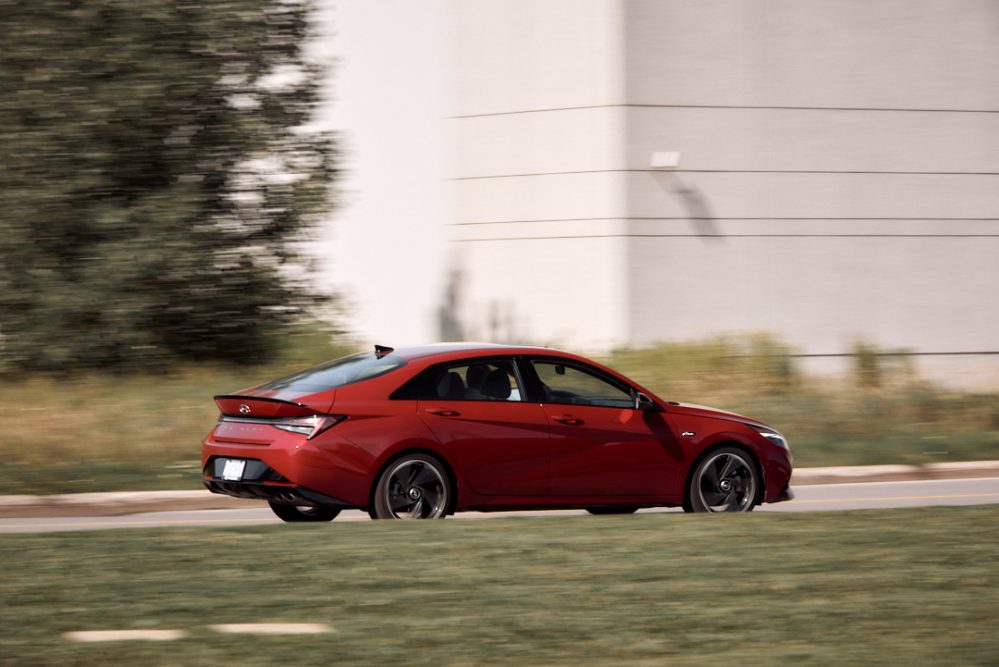 Such instant torque delivery is handy to get the 2022 Hyundai Elantra N Line out of a corner, because you won’t be able to put your foot down while the wheels are turned. That’s because Hyundai forgot (again) to fit the car with a limited slip differential. So contrary to a Jetta GLI or a Civic Si that allow you to rotate the car while applying throttle, doing so in the Elantra N Line will only lead to more understeer. 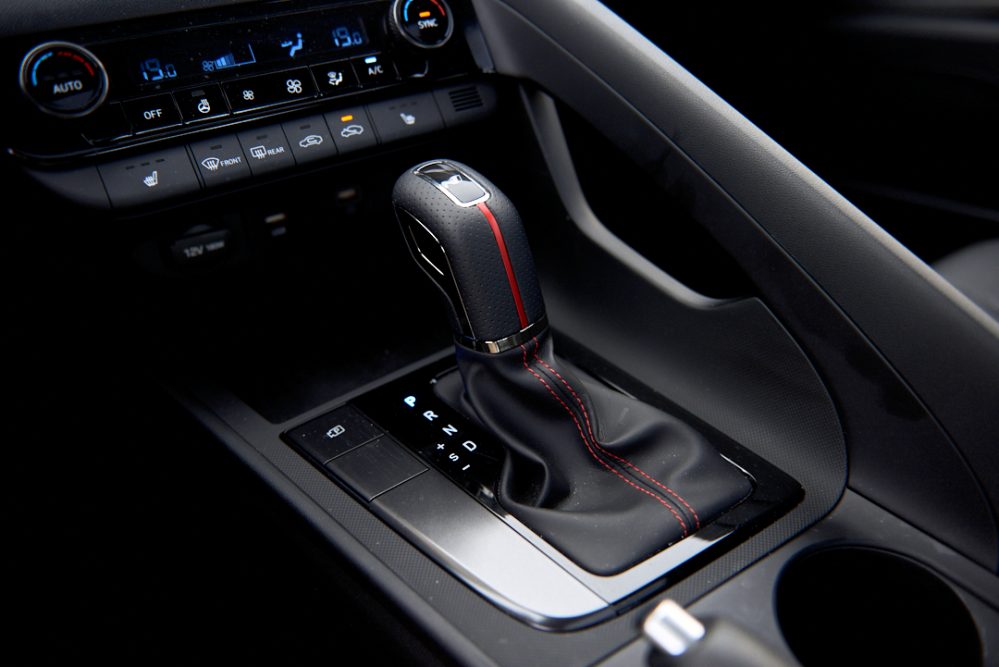 Be patient, however, let her correct her line, and punch the accelerator pedal to exit your way out and you’ll be fine. It’s an old-school way of putting power to the ground in a front-wheel drive car, and not all that efficient, but it works nevertheless. Meanwhile, the entire Elantra’s chassis is nice and solid, buttoned down and compliant, with a dead steering feel that nevertheless responds quickly to your inputs. 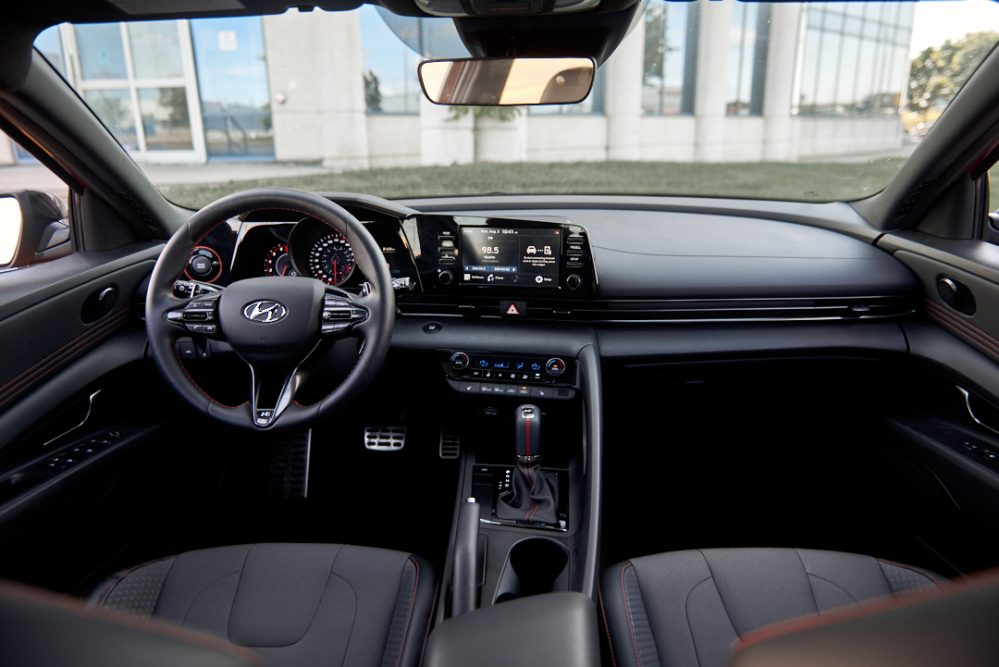 Inside, the Elantra makes big strides over its predecessor in terms of overall build quality, refinement and the dashboard’s general presentation. The N Line package adds clean, but subtle red accents here and there while physical HVAC controls simplify the car’s basic functions. 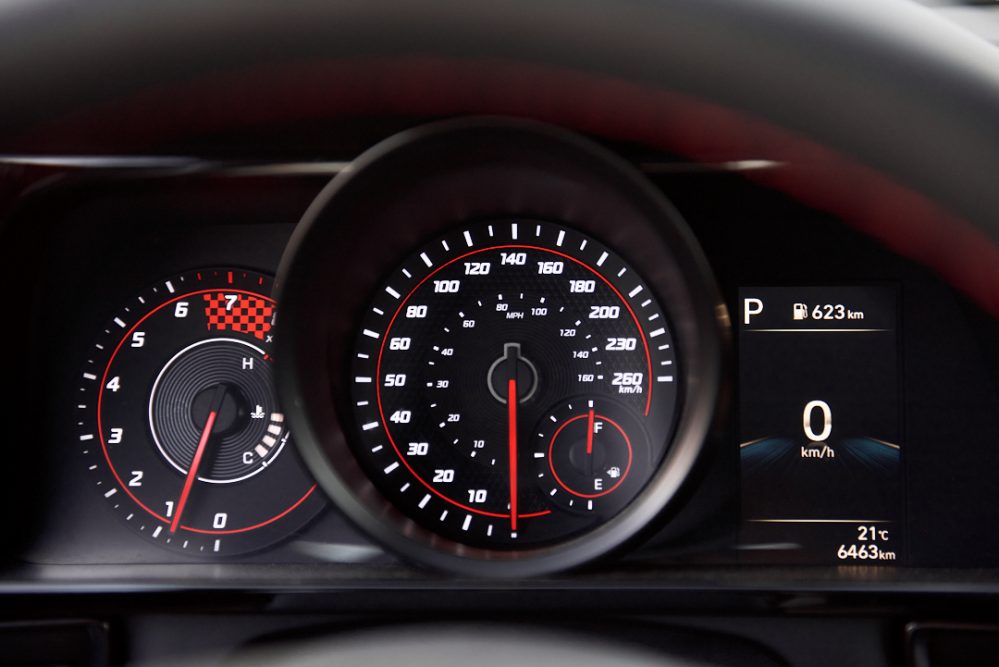 There’s a sportier steering wheel complete with the letter N. I’m also personally grateful that this car still has a good old physical gear lever and handbrake. Kudos to the analog gauges which give the car a nice sporty look and feel. I’m just not sure about that huge nipple on the left that acts as a drive mode selector. Why a nipple? 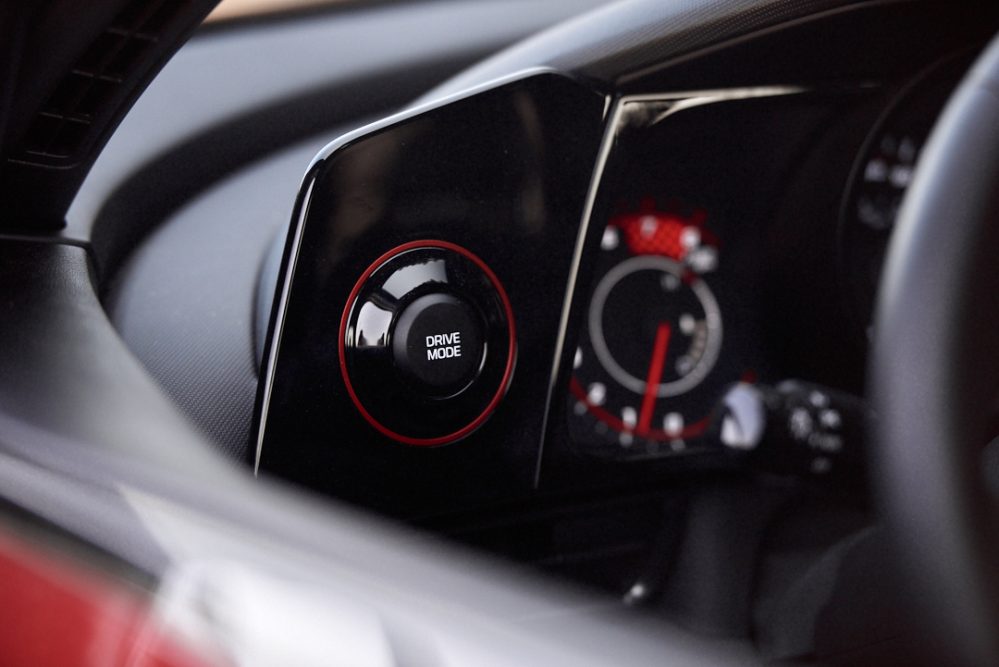 What’s great about the 2022 Hyundai Elantra N Line is how easy it is to exploit the available performance. It’s quick off the line, without ripping your face off. It looks sporty without attracting the cops, and its handling is decent enough to have a bit a fun against a Golf GTI out on a country road. Yet, when you dial everything back a notch, it also becomes an Elantra. This means it’s highly practical, efficient and cheap to run. 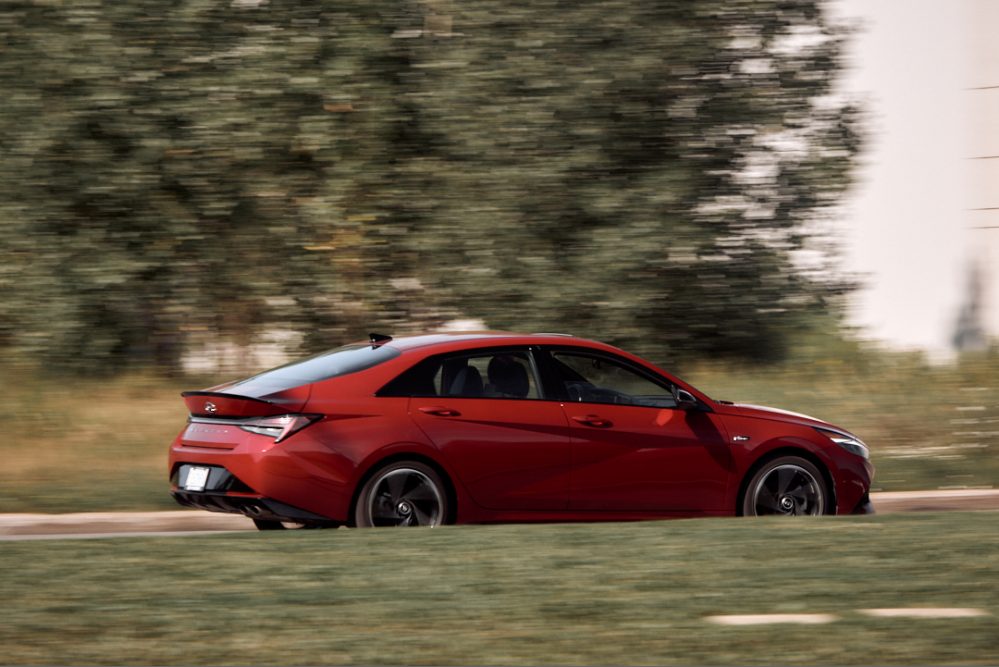 These are the kinds of virtues that once defined the Honda Civic Si. Today, Hyundai not only mimics that offering, but it surpasses it in the area that matters the most: price. The Elantra N Line may look weird, but its level of refinement and sophistication knock at the door of a Volkswagen product, except it doesn’t come with a German price tag. It’s fair to say then that Hyundai has officially made it in the big leagues.