2021 Toyota Tacoma TRD Pro Should Always Be Covered In Mud 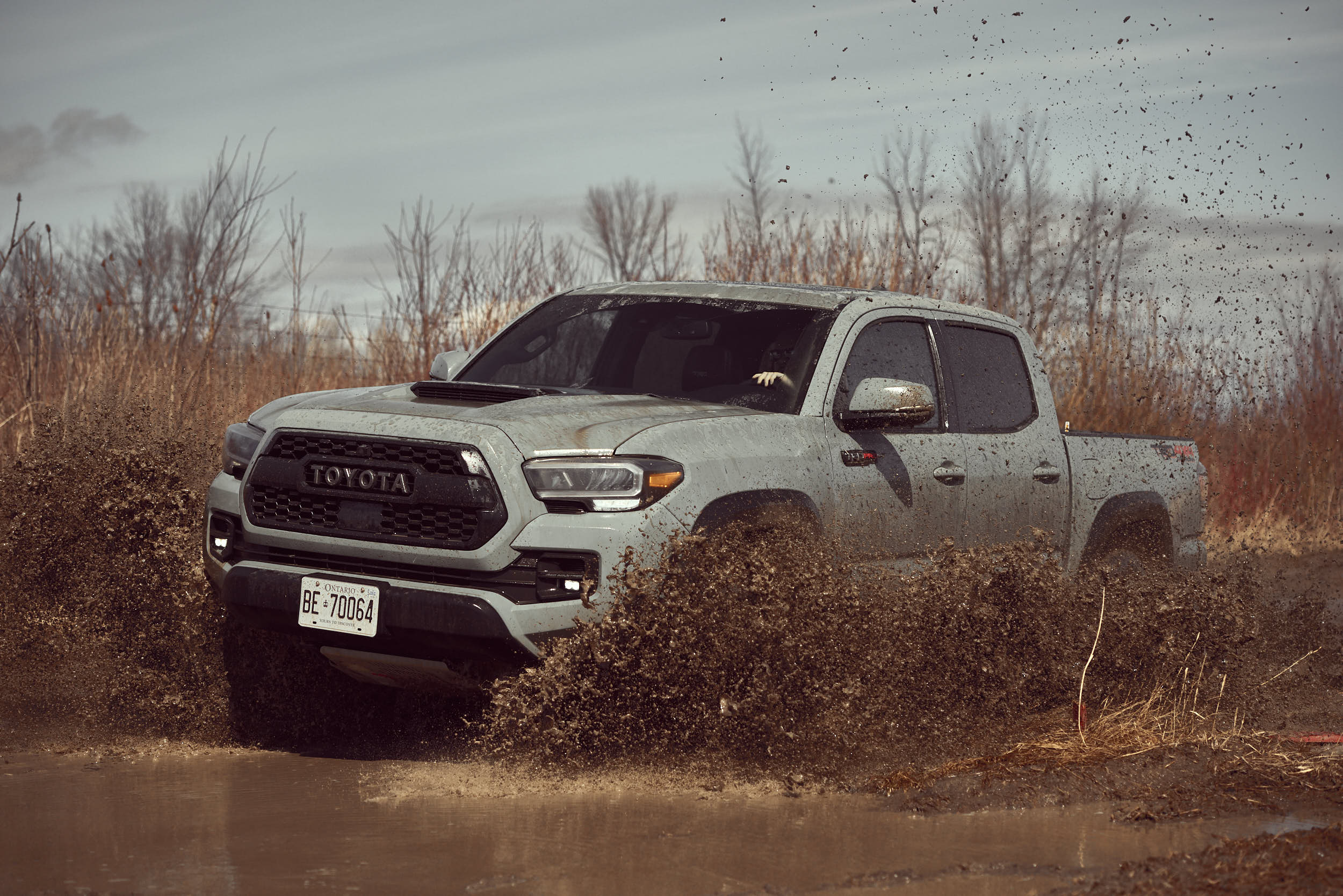 I could sum up my review of the 2021 Toyota Tacoma TRD Pro in one sentence: there’s a new paint color and the truck can still get you out of a muddy trail no sweat. The end. But that would ruin the point of a car review. While I continue to believe that a Chevrolet Colorado ZR2 will get you more off-road gear for your hard-earned dollar, there’s no denying how badass Toyota’s TRD Pro series remains. 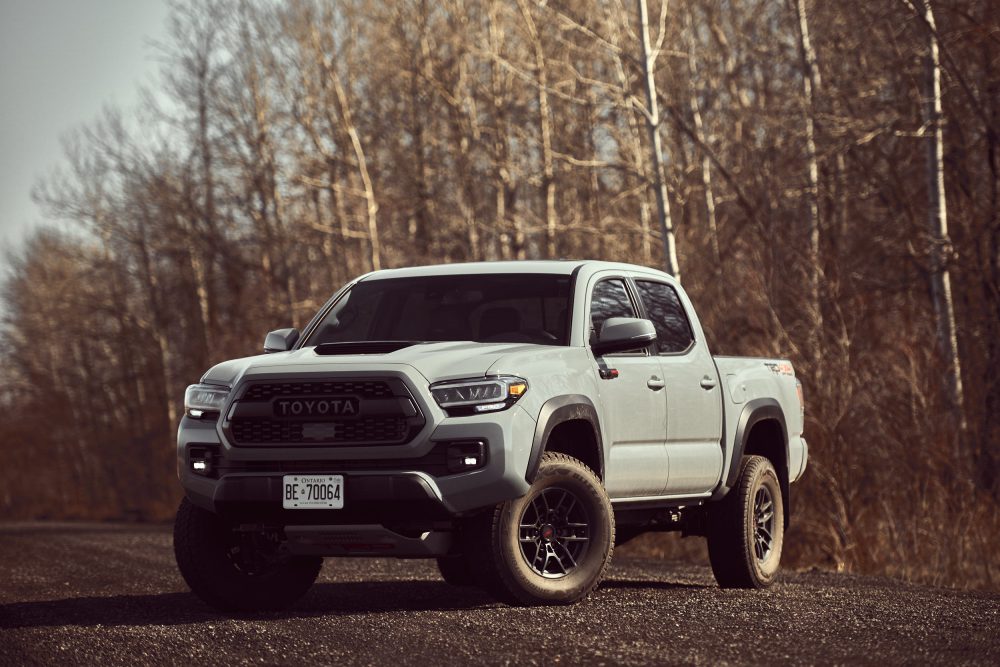 The Tacoma really reminds me of those cool kids in high school that received all the intention for no apparent reason. Even if there exists more capable trucks out there, some with a more comfortable cabin, more towing capability and a more comfortable seating position, Toyota’s rig is still the unquestionable king of “I need one in my driveway”. 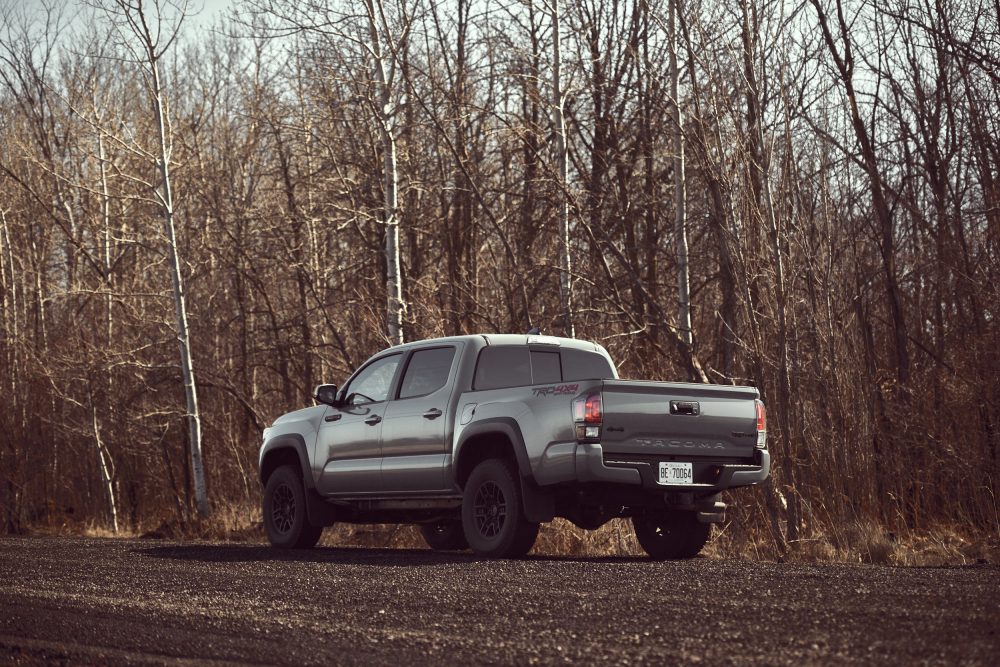 And Toyota knows this, which is why it’s still milking the TRD Pro cow. Remember, the TRD Pro lineup was originally a test of the waters. Toyota never intended the package to be as popular as it is now. But since every model year has sold out before the third quarter, with consumers coming back for more, Toyota would be foolish to stop. 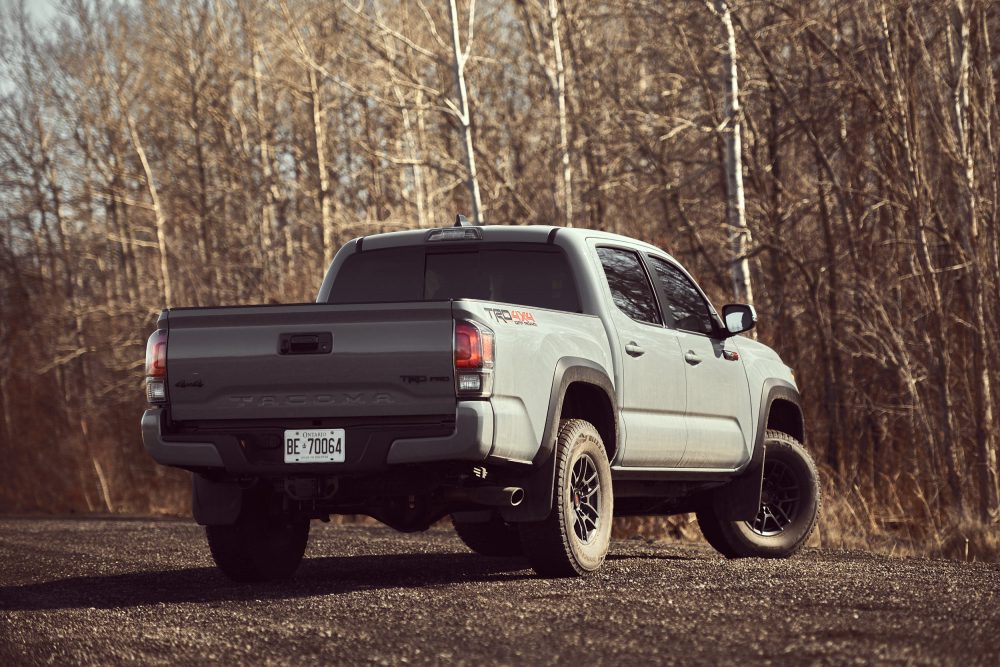 The 2021 Toyota Tacoma TRD Pro gets a new color this year called Lunar Rock (every model year gets a unique theme color). A minor facelift was applied to the truck’s front fascia, affecting mostly the bumper and the now standard LED headlights. There are also LED blinkers , new from last year, that blink in a sequence a bit like on a Ford Mustang or some Audi vehicles, as well as new wheels and slight cabin updates. 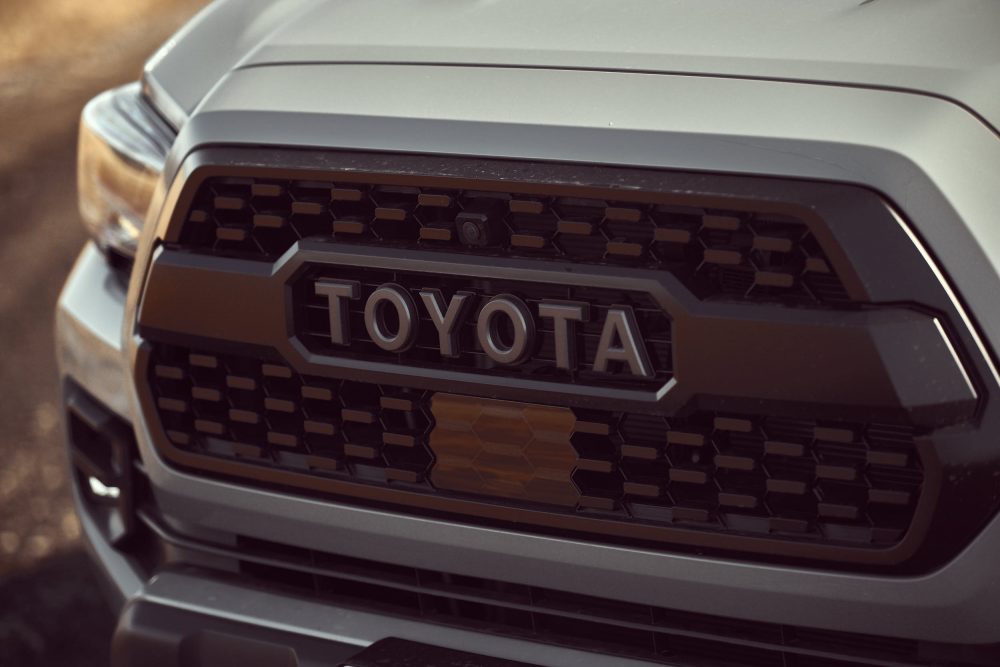 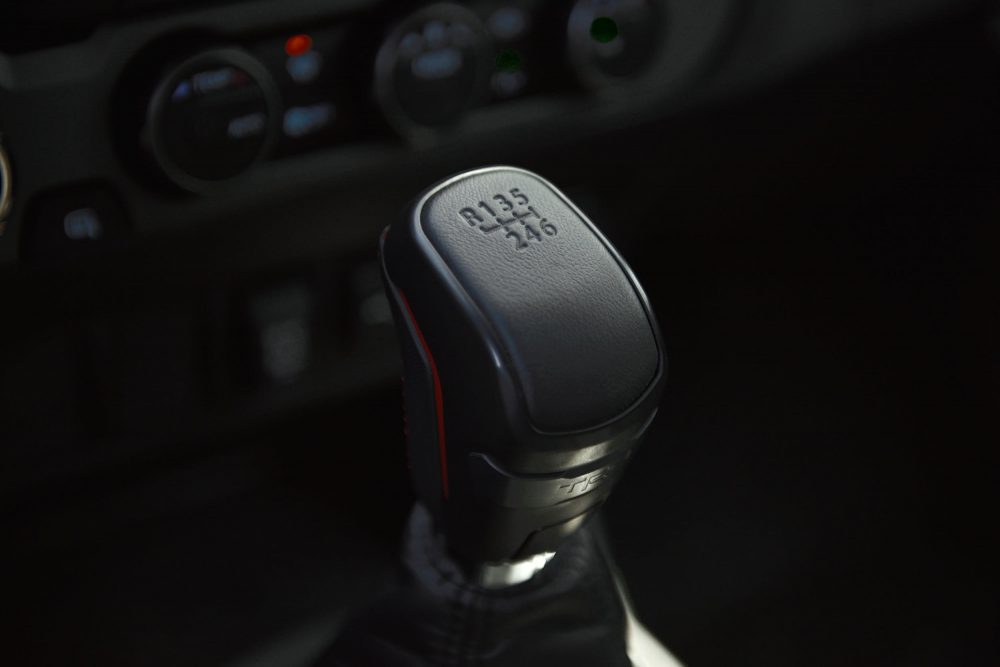 Power remains unchanged for the 2021 Toyota Tacoma, and the TRD Pro package alters nothing underneath the hood. It’s still powered by a tried and tested 3.5-liter V6 good for 278 horsepower and 265 lb-ft of torque. It can either be mated to a six-speed automatic or six-speed manual. My tester had the latter, which made it even more desirable. 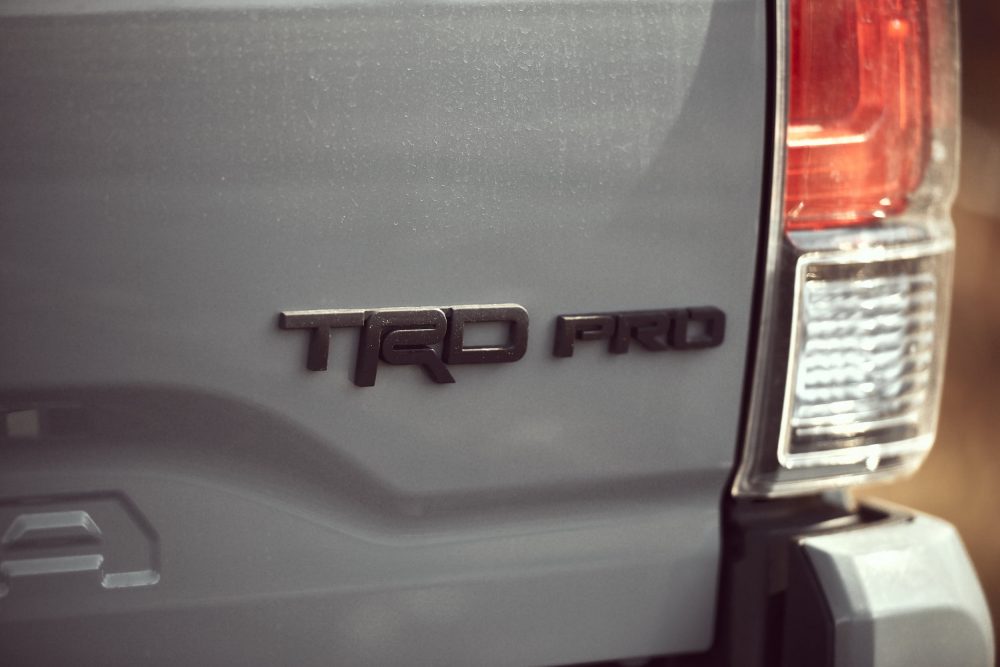 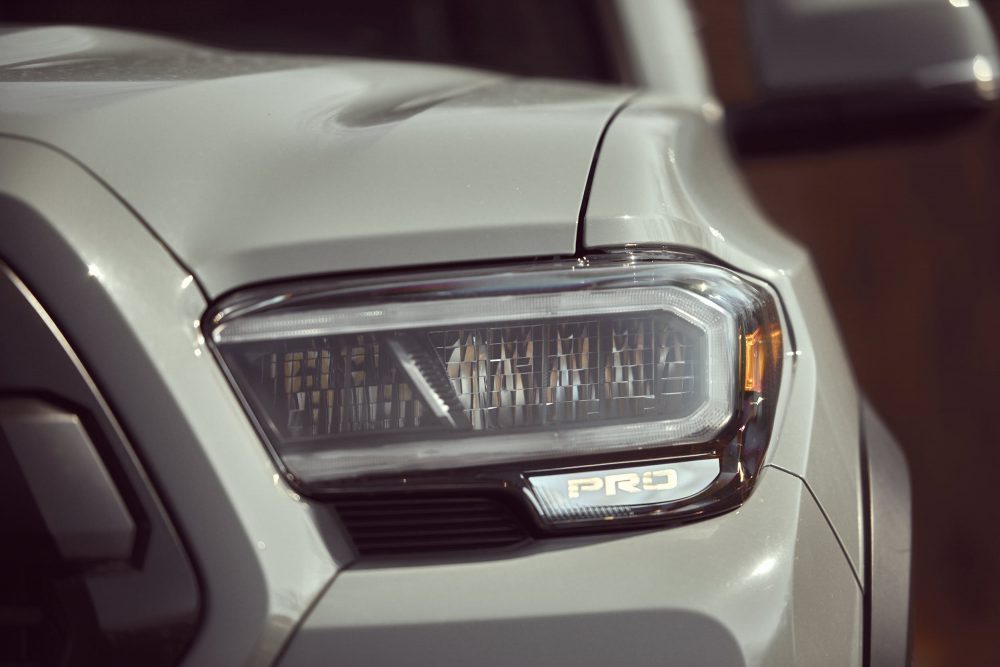 But pricing though. Oh my god pricing. If you’re willing to lose an arm and maybe a leg, then perhaps you’ll be fine. The 2021 Toyota Tacoma TRD Pro kicks off at $47,679. The model you see here is $54,330 after options. By comparison, you could get a full-size Ford F-150 or Ram 1500 for similar money. Perhaps, even worst, is that it’s about the same price as the much more extreme Colorado ZR2. 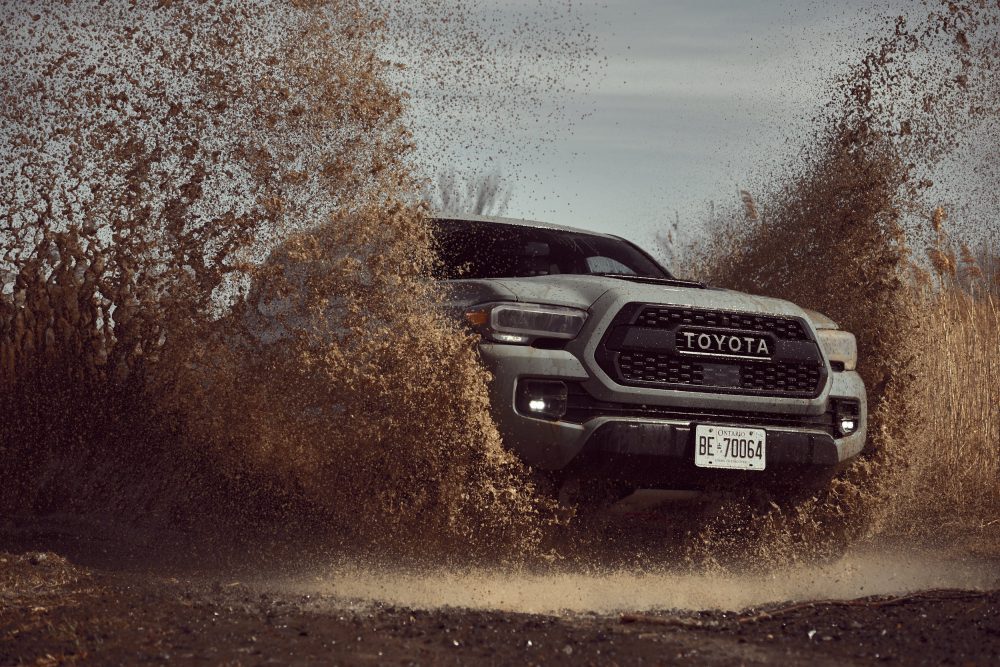 With the Tacoma TRD PRo, Toyota really shows that it’s capable of manufacturing a desirable toy. This is by far the coolest looking small truck on the market. It’s the one we all want to own, mostly due to social association or entertainment. Remember Marty McFly’s Toyota in Back to the Future? And by now, we’ve all seen videos of African or Islamic terrorists riding in the box of one of these bad boys. The Tacoma is the truck you want to face an apocalypse. 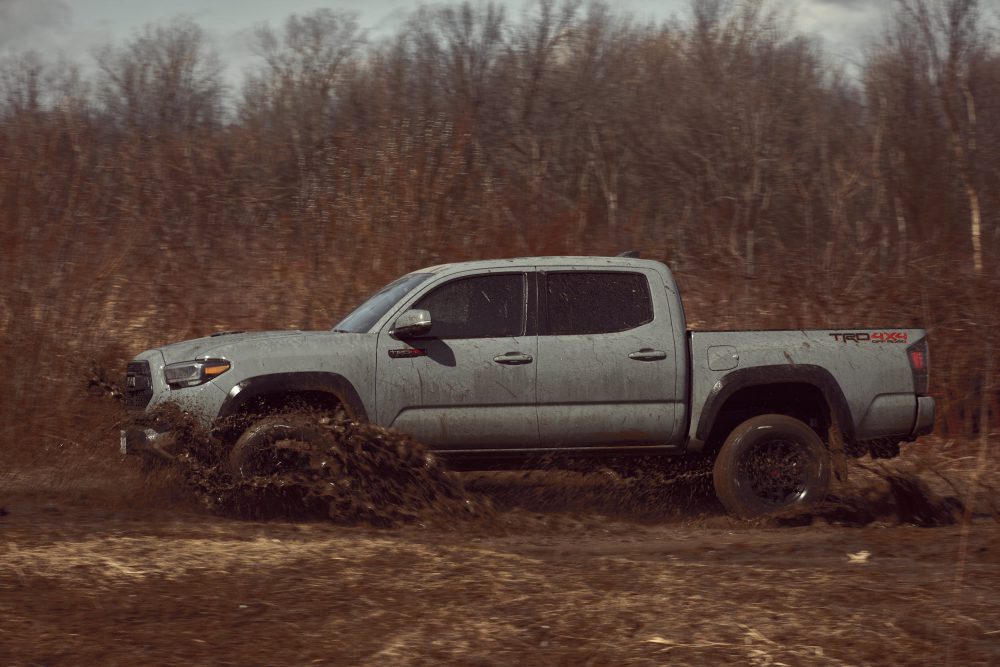 Yes, the Tacoma is a sturdy truck (since Toyota fixed the weak frame issues of early models), but when facing its rivals, things like the Chevy Colorado/GMC Canyon, Ford Ranger, Jeep Gladiator, Honda Ridgeline and soon, an updated Nissan Frontier, the Tacoma is just old. Even though the truck was refreshed in 2016, its core platform dates back to 2005. 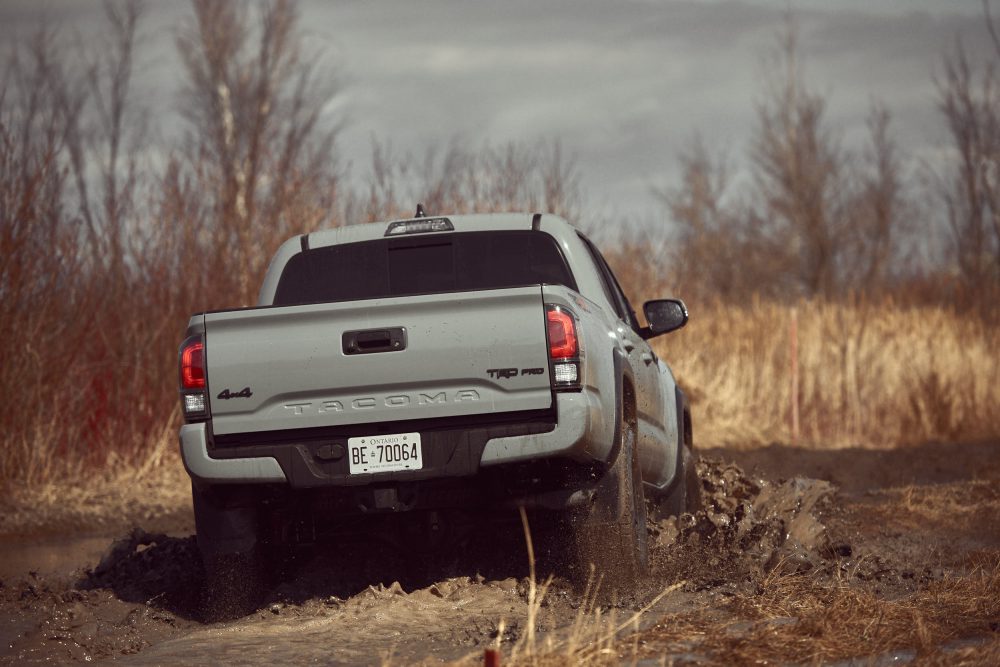 This is particularly apparent in the Tacoma’s road manners. It’s a jittery truck, bouncy, not so comfortable and absolutely not fuel efficient. I could barely keep the thing under 15L/100 km. There’s the seating position, which has your knees up high due to a high roof. The lifted, but low cabin also makes it hard for tall people to get in, since you need to climb first, and then crouch. It’s an ergonomic detail, sure, but its rivals can do without it. 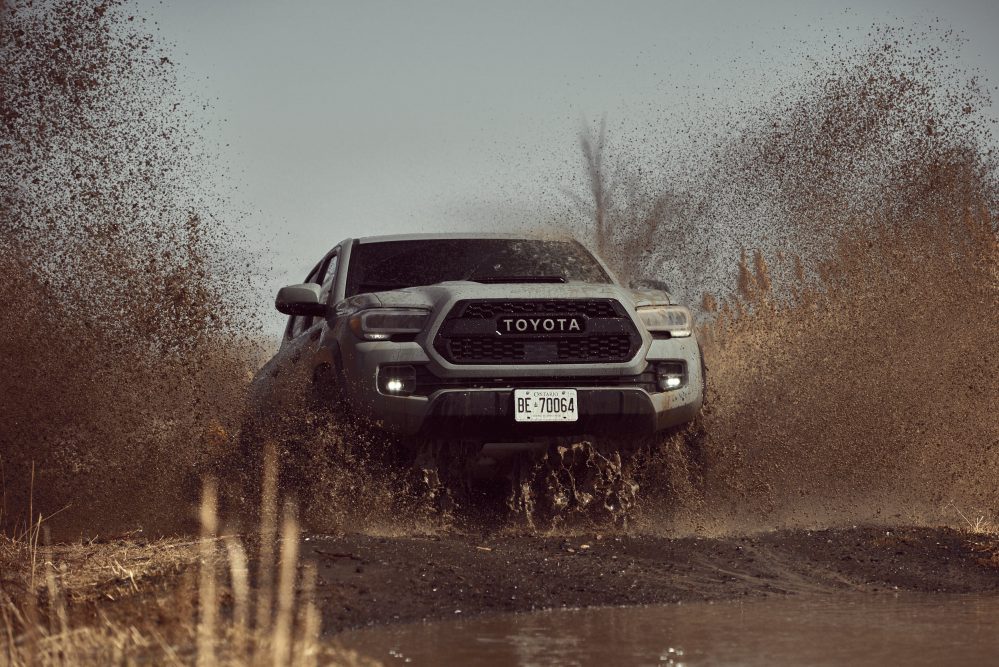 I have nothing to say about the drivetrain though. Toyota’s V6 is always smooth, likes to rev (although gearing is short with the manual and emits a satisfying snarl at hard throttle. The upgraded exhaust from the TRD Pro package is a nice touch as it only slightly amplifies the decibels. It’s the same story for the manual transmission: the shifter is precise, with a crisp engagement. The clutch is light and bites quickly. 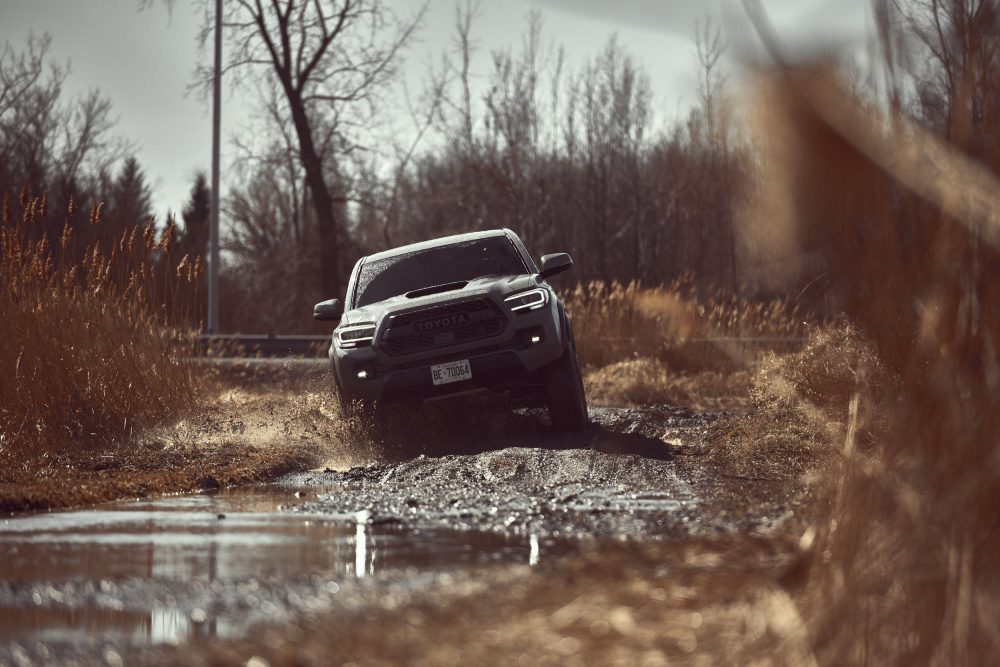 While the Tacoma TRD Pro may be a little rough around the edges on public roads, there’s no hiding the merits of its upgraded Fox suspension. There’s a clear difference in smoothness from a standard Tacoma. This one simply soaks up the bumps in a much more refined fashion. All of this translates to better composure in the trails as well. You can simply attack faster, harder and basically have more fun with it. 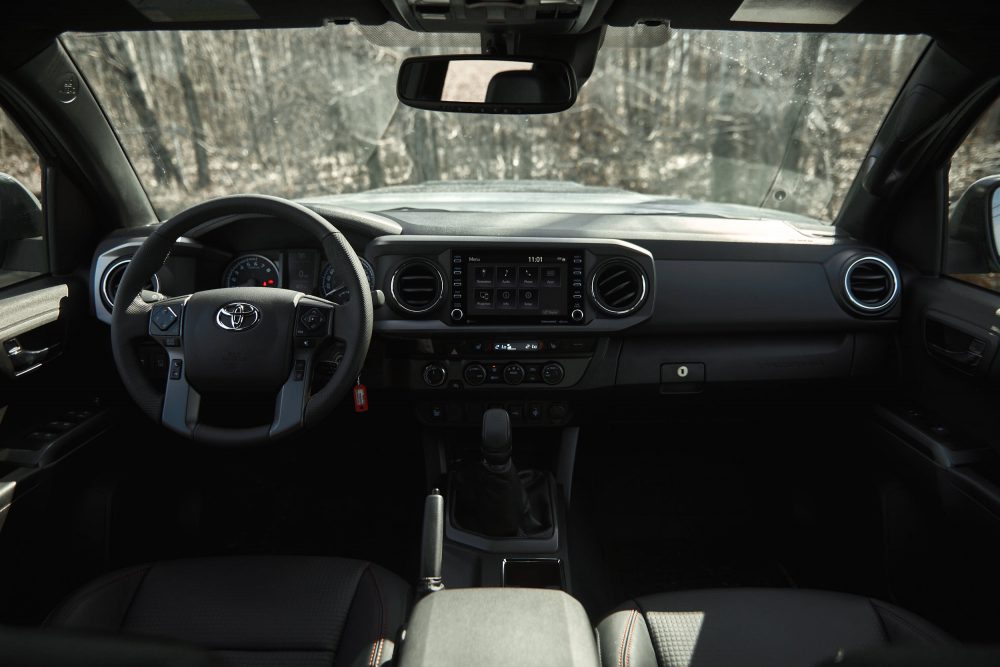 Inside, the Tacoma’s cabin feels a little cramped due to its high floor and low roof, and the seats are a little too hard for this price point, but the Tacoma continues to be well equipped for a small truck. While I still don’t get why there isn’t a push button start feature, Android Auto/Apple Carplay, wireless phone charging and navigation are all included. 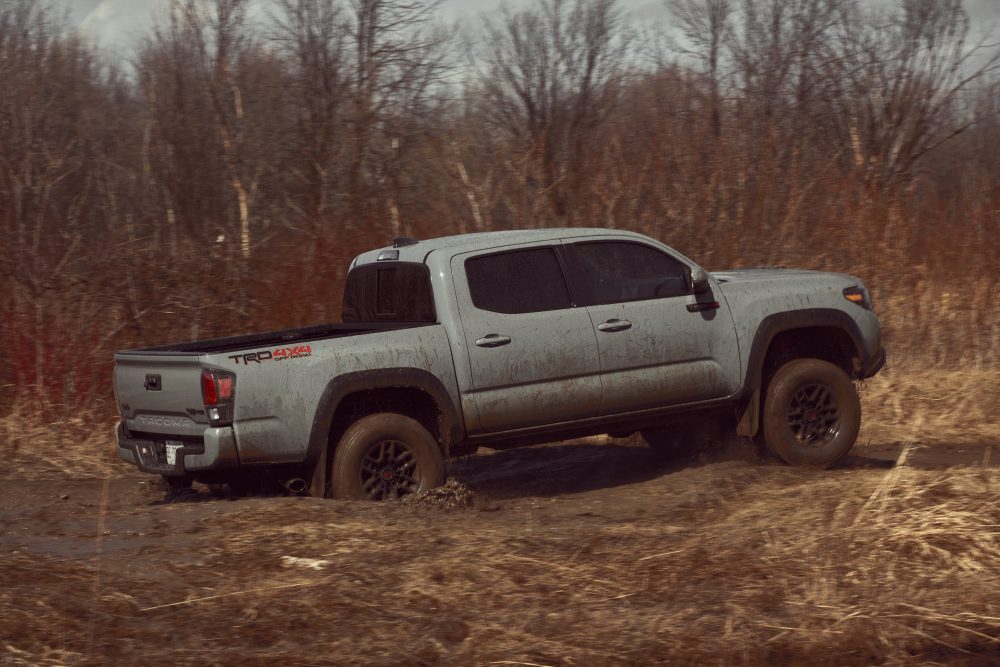 Perhaps where the 2021 Toyota Tacoma TRD Pro continues to impress, is in its unmatched reliability record and stellar resale value. Yes, these are expensive trucks, and they’re not exactly cheap to insure or to run, but they represent the rate examples of an automotive investment.  No matter in which shape it’ll be in, you can be damn sure your old Toyota truck will still be worth a healthy sum.