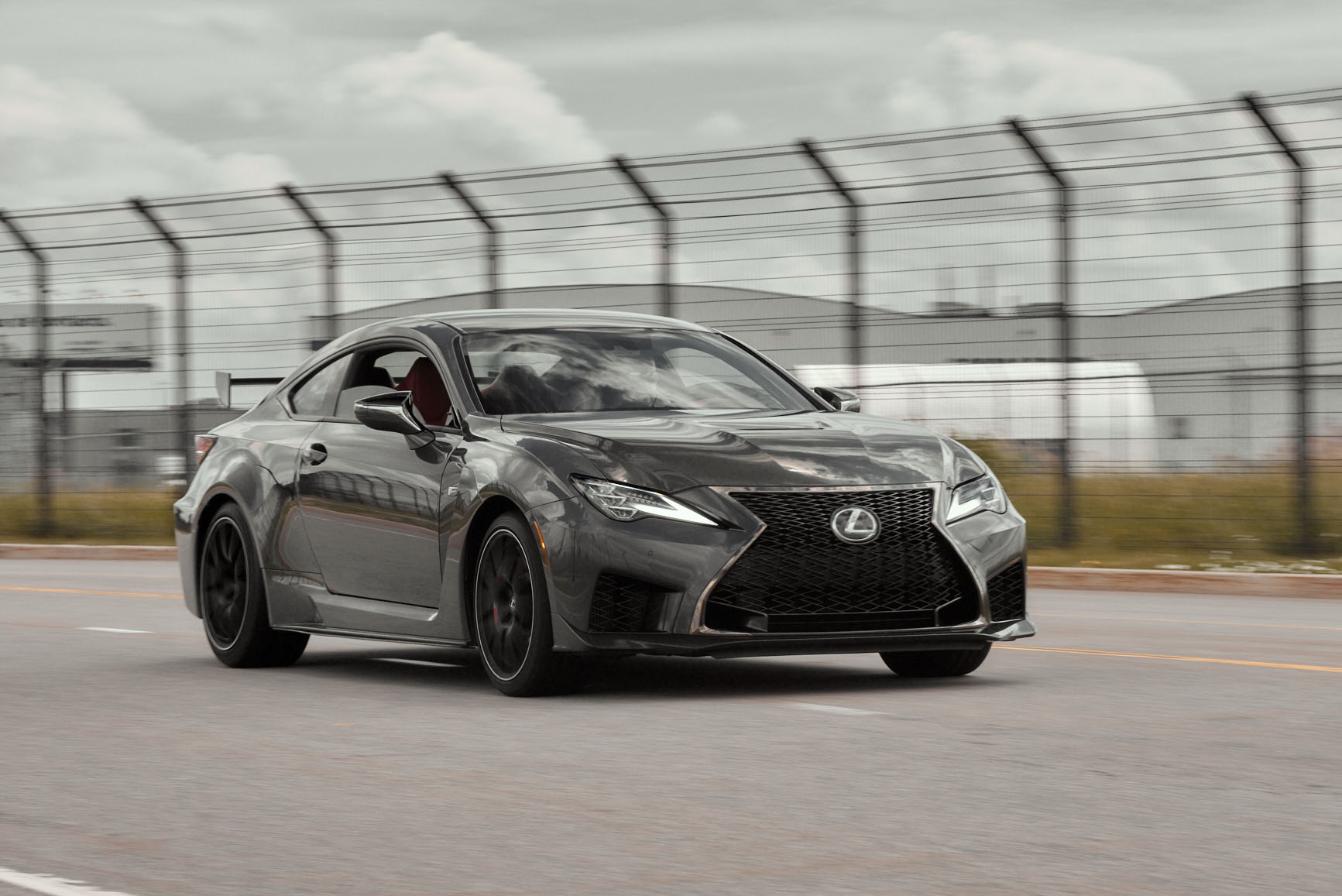 One would think that the 2021 Lexus RC F Track Edition would be considerably less expensive than a German alternative, but it’s not. There’s actually a $20,000 gap between this and a much more nimble BMW M4. But none of that matters, because the extra money you’ll have injected in this car will serve as an investment. This car is a future classic. 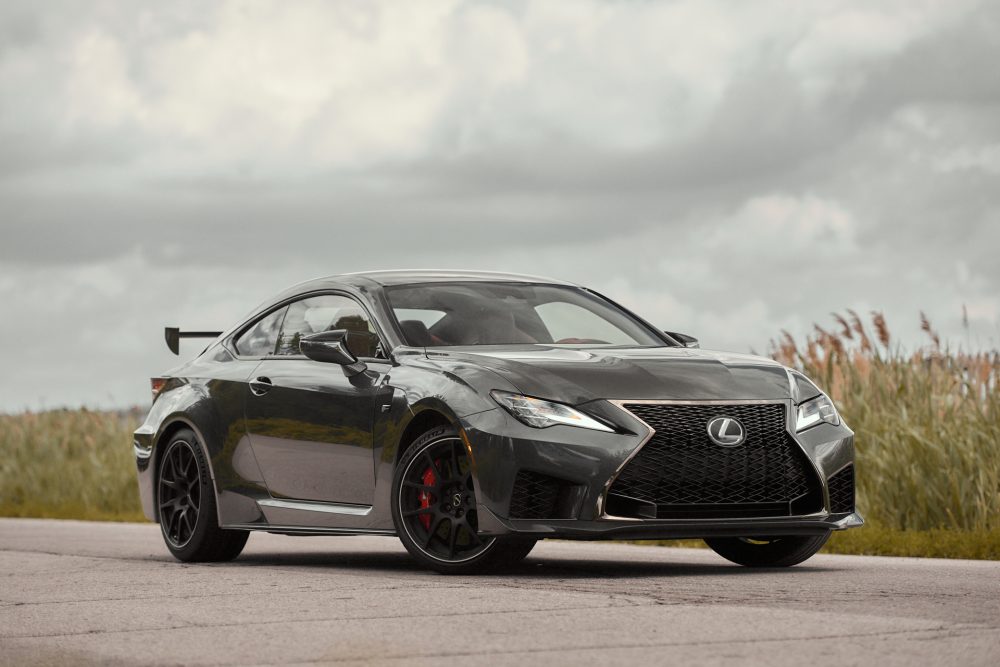 Because if you stop to think about it, in about 10 to 15 years from now, when we’ll see a BMW M4 driving by, it’ll be a cool car, but it’ll still only be a BMW M car. Spot someone driving a Lexus RC F however, and you can be damn sure that a lot of heads will turn. Like the Acura NSX, this Lexus is all about exclusivity. And exclusive it is, as only about 50 units of the Track Edition are expected for the North American market. 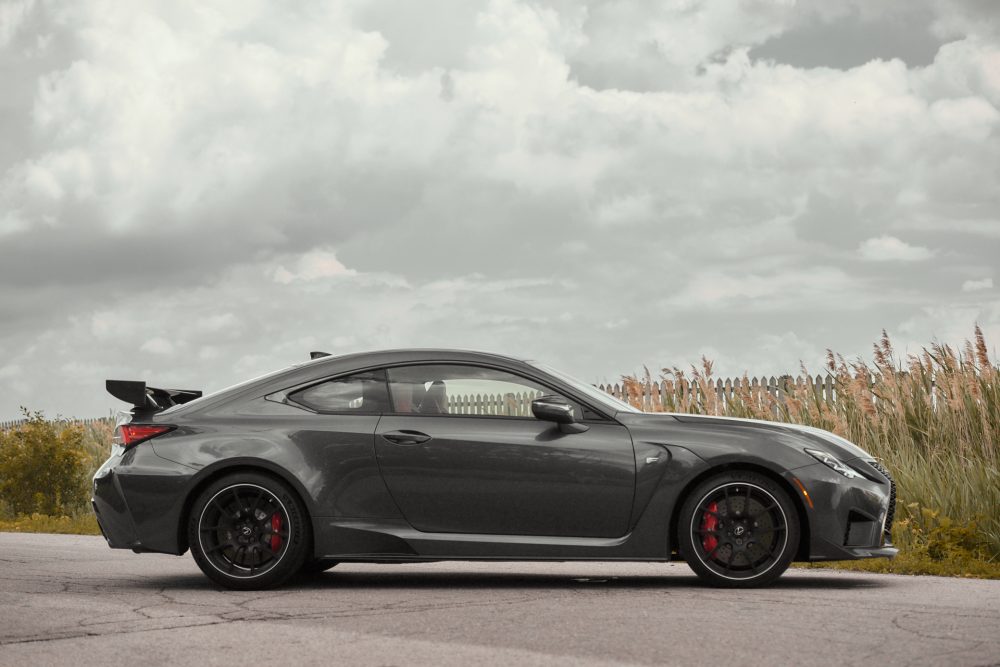 The Track Edition package alone costs a whopping $35,000, which inflates the RC F’s already heavy price tag to a BMW-stomping $122,671. That’s about 20 grand more than an M4 Competition, which also happens to be considerably more powerful, more modern and quicker off the line. 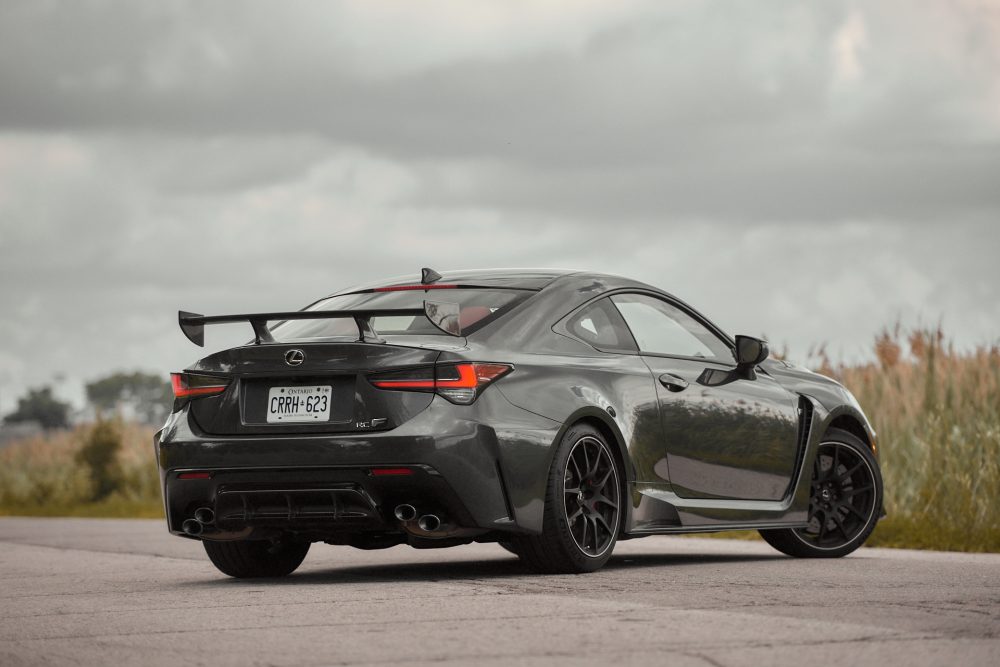 So what exactly are we talking about here? While costing the price of a Volkswagen Golf GTI, the kit does give you a lot of go-fast equipment. Most of it aims at reducing the RC F’s overall weight. For instance, there’s a carbon fiber hood, roof and gigantic rear wing that also generates up to 57 pounds of downforce. The Track Edition also gets model-specific lightweight 20-inch wheels and comes standard with carbon ceramic brakes. 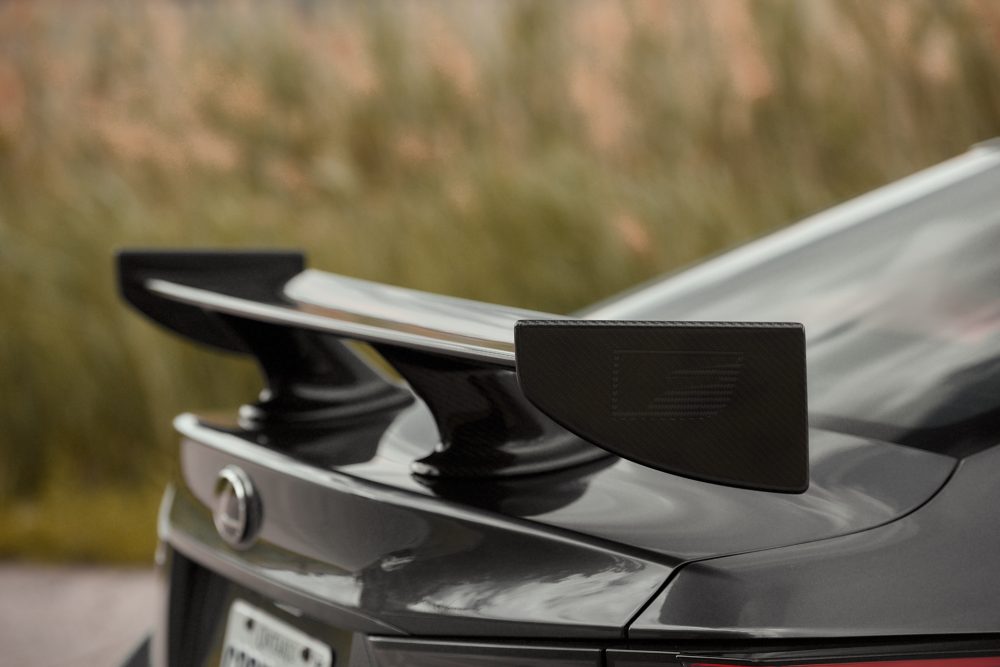 Then there’s the real geeky stuff like hollow half shafts and a shorter final gear ratio – from 2.94:1 to 3.31:1 – for a more linear torque curve as the engine climbs in revs. The RC F’s adaptive dampers were also retuned for a more focused ride in Track mode, and Lexus replaced the electronic torque vectoring rear differential for a more direct mechanical type. Lexus says it’s a better setup for track use. I’ll get back to that claim in a bit. 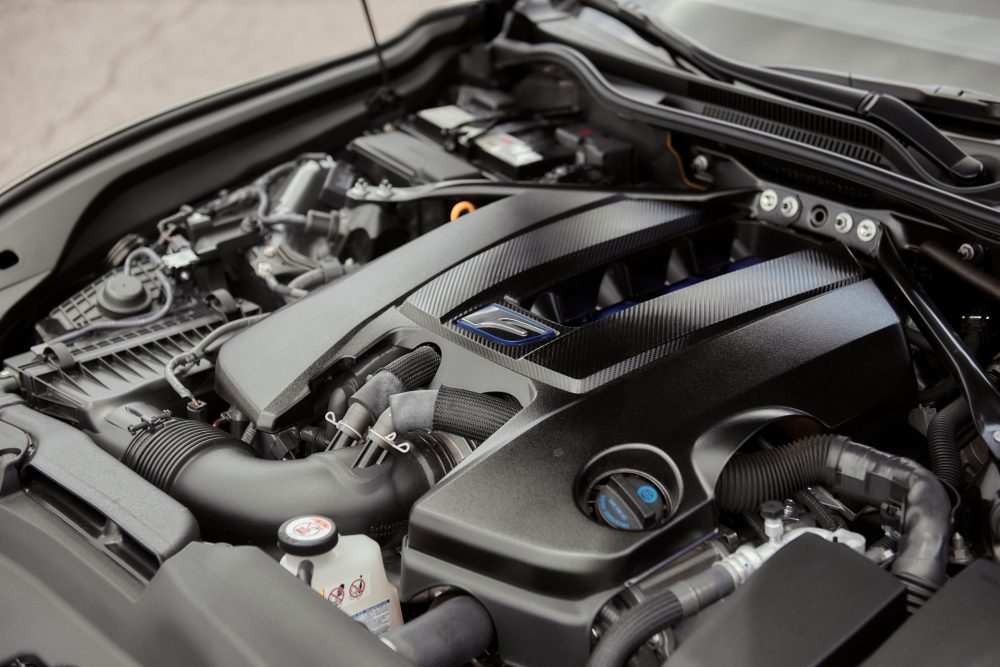 Power comes courtesy of the same fabulous 5.0-liter V8 as before. It’s also the engine that powers the exquisite Lexus LC500. In the track edition, it sees a slight bump in power, from 467 to 472 horsepower. Torque remains unchanged at 395 lb-ft. All of it is mated to an eight-speed automatic transmission. Of course, the 2021 Lexus RC F Track Edition only comes with rear-wheel drive. 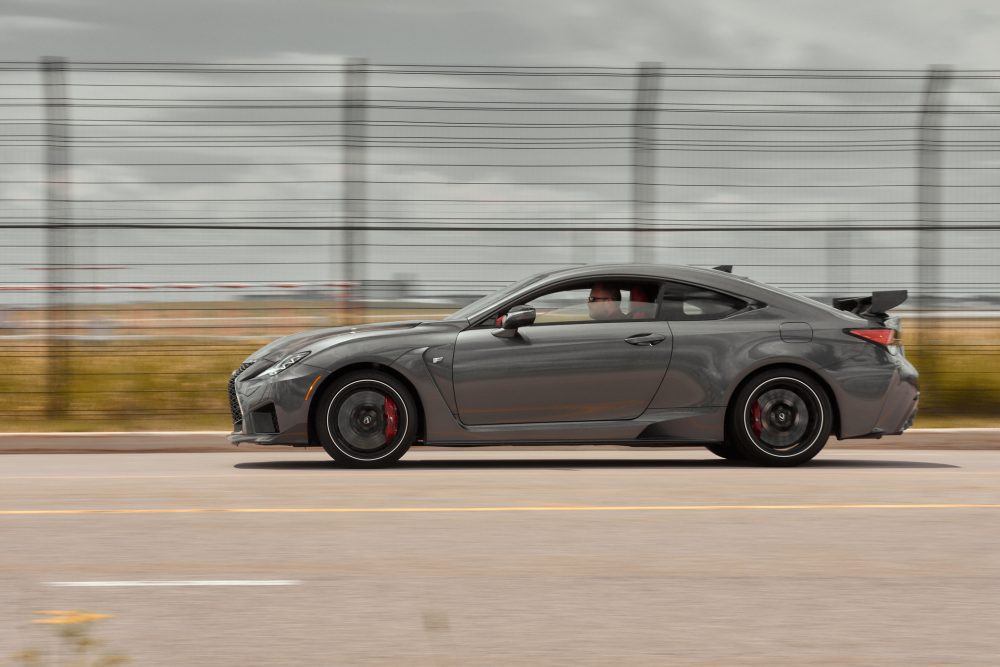 No, the RC F Track Edition is nowhere near as precise nor as quick around a track as an equivalent BMW M car, but it’s no slouch either. I’d know, because although you’re not seeing it in these photos (we shot the car beforehand), I had a chance to run a few laps at Sanair with it. 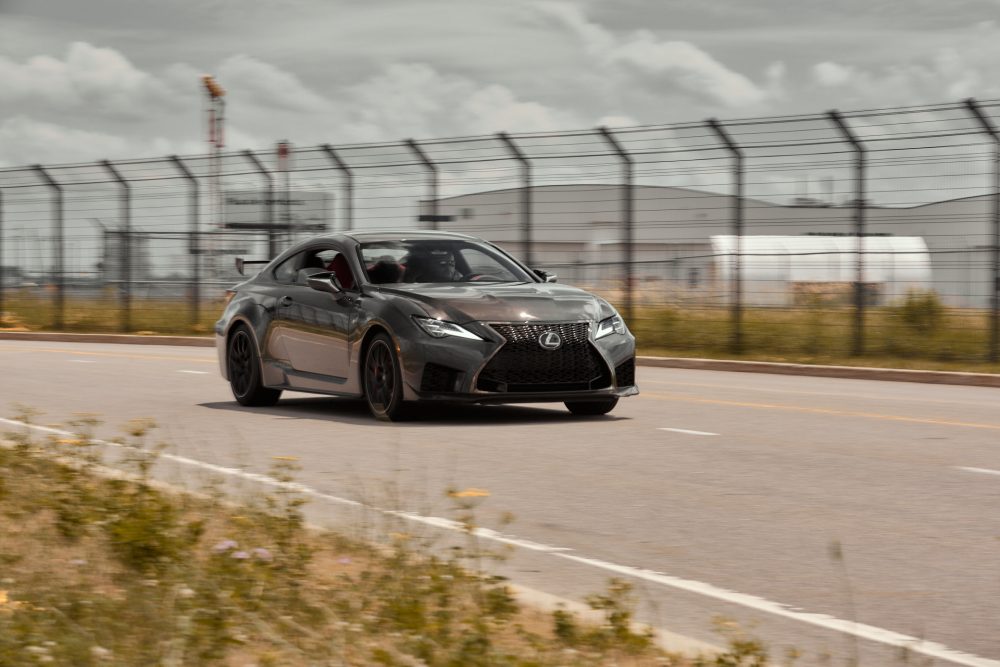 Although Lexus went through great lengths to put the RC F on a diet, the darn thing still weights 3.781 pounds. That’s a full 165 pounds heavier than the already porky BMW M4. This means that you really need to grab this ol’ girl by the scruff of the neck when attacking corners, because yes, its rear will kick out if you dare to commit too hard when exiting. Extreme weight transfers could also have you kissing a wall if you lift off. 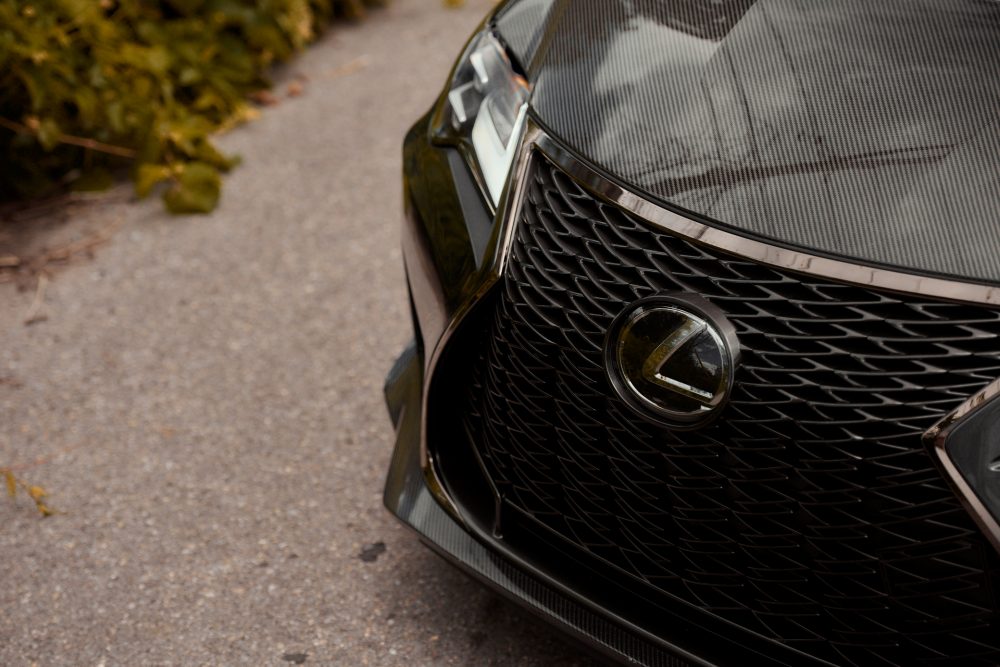 Oh, and that thing Lexus was saying about a mechanical differential being more direct? It is. The Track Edition doesn’t forgive like a regular RC F. Once its threshold is set, it’ll start drifting like there’s no tomorrow. The key when this happens with a car of this size and weight is to rely on the amount of grip its massive 275-wide rear tires generate. In other words, once the ass kicks out, keep flooring the throttle, and never let go. 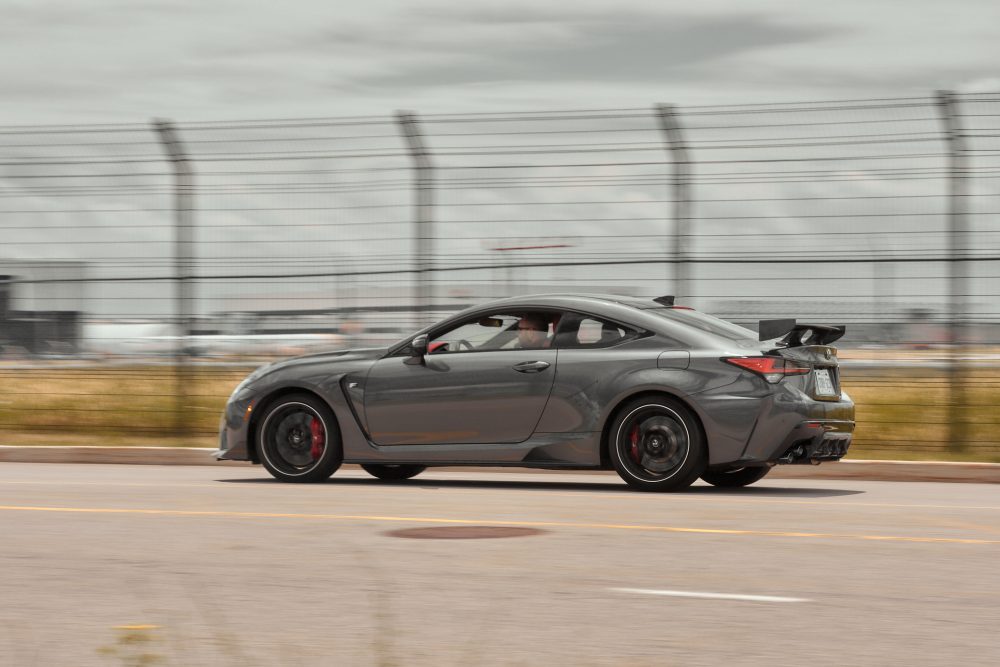 Doing so will grant you some majestic power slides and yield some large grins on your face. While not the most effective way to go around a race circuit, it’s definitely loads of fun. What the 2021 Lexus RC F Track Edition loses in finesse and precision, it makes up for it with its flamboyant character. 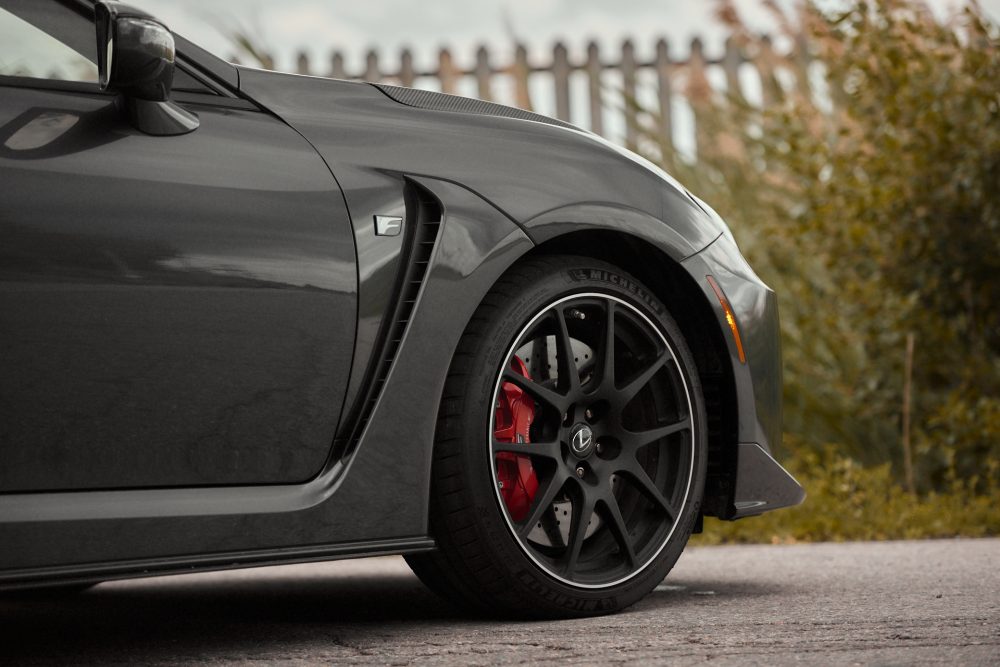 The naturally aspirated V8 is a blessing in a world of forced-induction six cylinders. Low end torque is obviously an issue given all the weight this sucker has on its shoulders, but once it starts boiling, this V8 generates some fine induction sounds.

The RC F is raspy, vocal, burbly, but also oh-so smooth, even when it’s kissing the rev limiter. The automatic transmission only seems to work properly when it’s set to manual mode, and the gears always feel too long. But the brakes are downright perfect. Never did they show any sign of weakness or fade, even when taking a heavy beating. 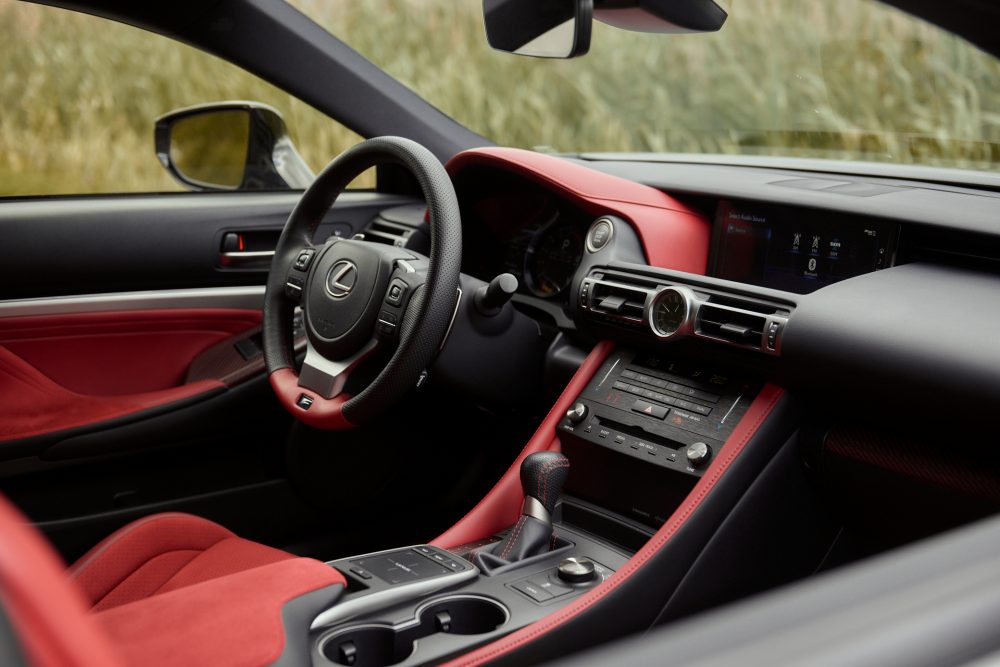 When I was done shredding what was left of the RC F’s tires on the track, I casually drove back home in the car’s most comfortable setting so I could sample its everyday drivability. That’s actually where this car surprised me the most: in its ability to still be a Lexus. While many carmakers know how to make a good track edition, very few master the art of also making a daily drivable machine out of it. 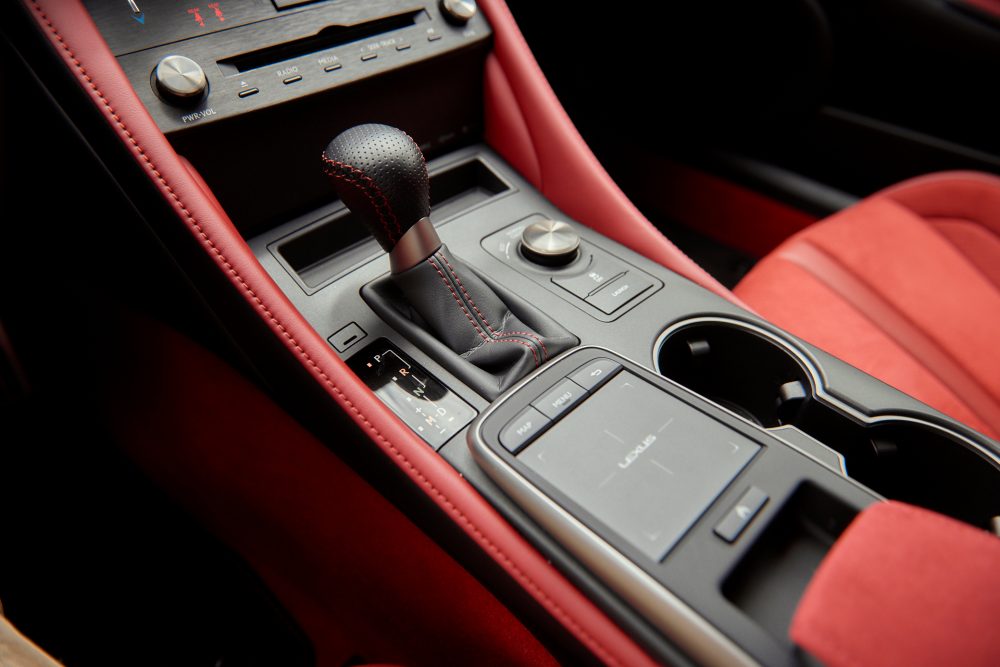 In Comfort mode, the Track Edition is so smooth and quiet, you’ll quickly forget you’re driving a spiced up version of the ordinary Lexus RC. The cabin is immensely well insulated, the ride is compliant and the build quality is among one of the best I’ve sampled in my career. Special points go to the red leather and suede interior that really contrasted well with the gunmetal grey paint job. 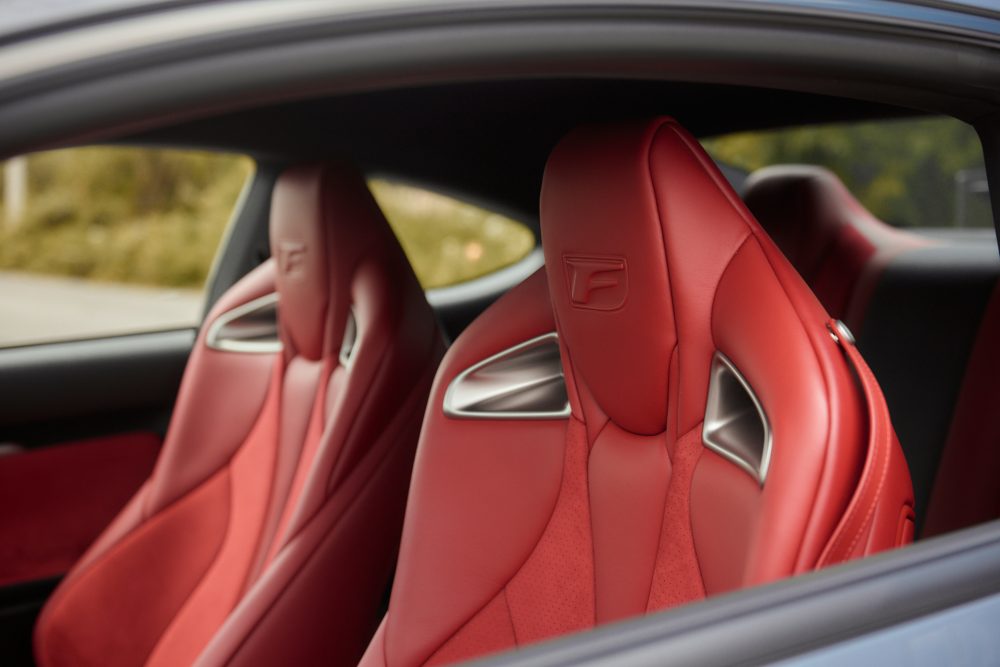 The Track Edition’s seats are also glorious both for track use and daily driving, but because they’re positioned high in the car’s cabin, finding a suitable seating position when you’re tall can prove problematic. Rear seat room is also surprisingly good considering the car’s 2+2 configuration. Meanwhile, Lexus’ trackpad-operated infotainment system remains an ergonomic mess. When simple tasks like answering the phone become tedious, it’s time for Lexus to ditch the system and offer something better. 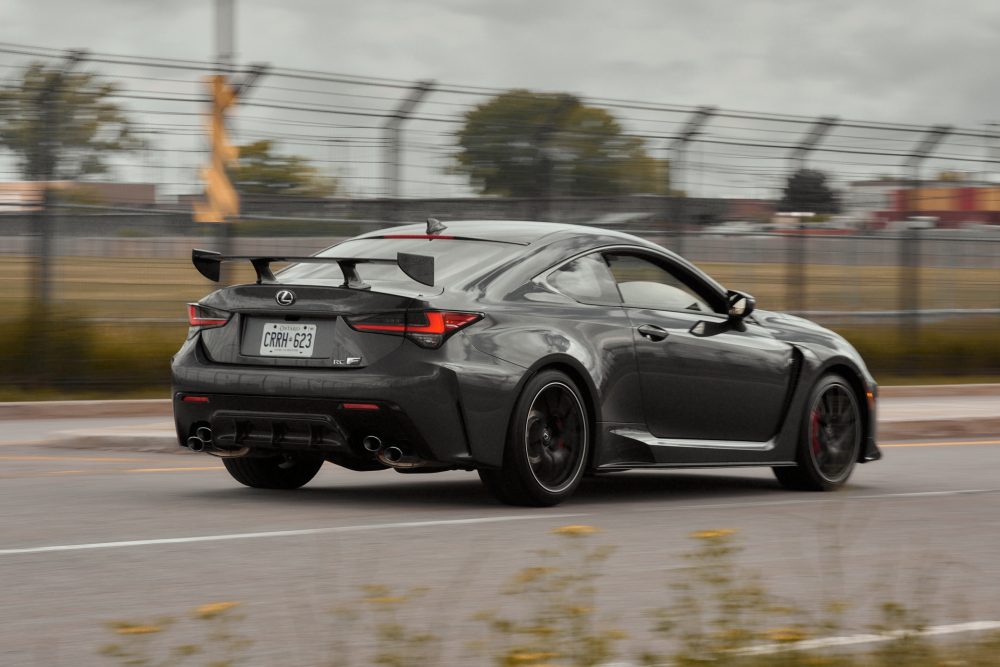 On paper, the 2021 Lexus RC F’s high price tag, dated technology and slower-than-a-BMW performance doesn’t exactly make sense. But when judged alone, it’s one hell of a charming beast that dances to the beat of a different drum. If you’re looking for something exclusive, unique and as solid as a rock, a car that’ll probably last forever if you maintain it well, you can’t go wrong with Lexus’ strange but highly appealing sports coupe.