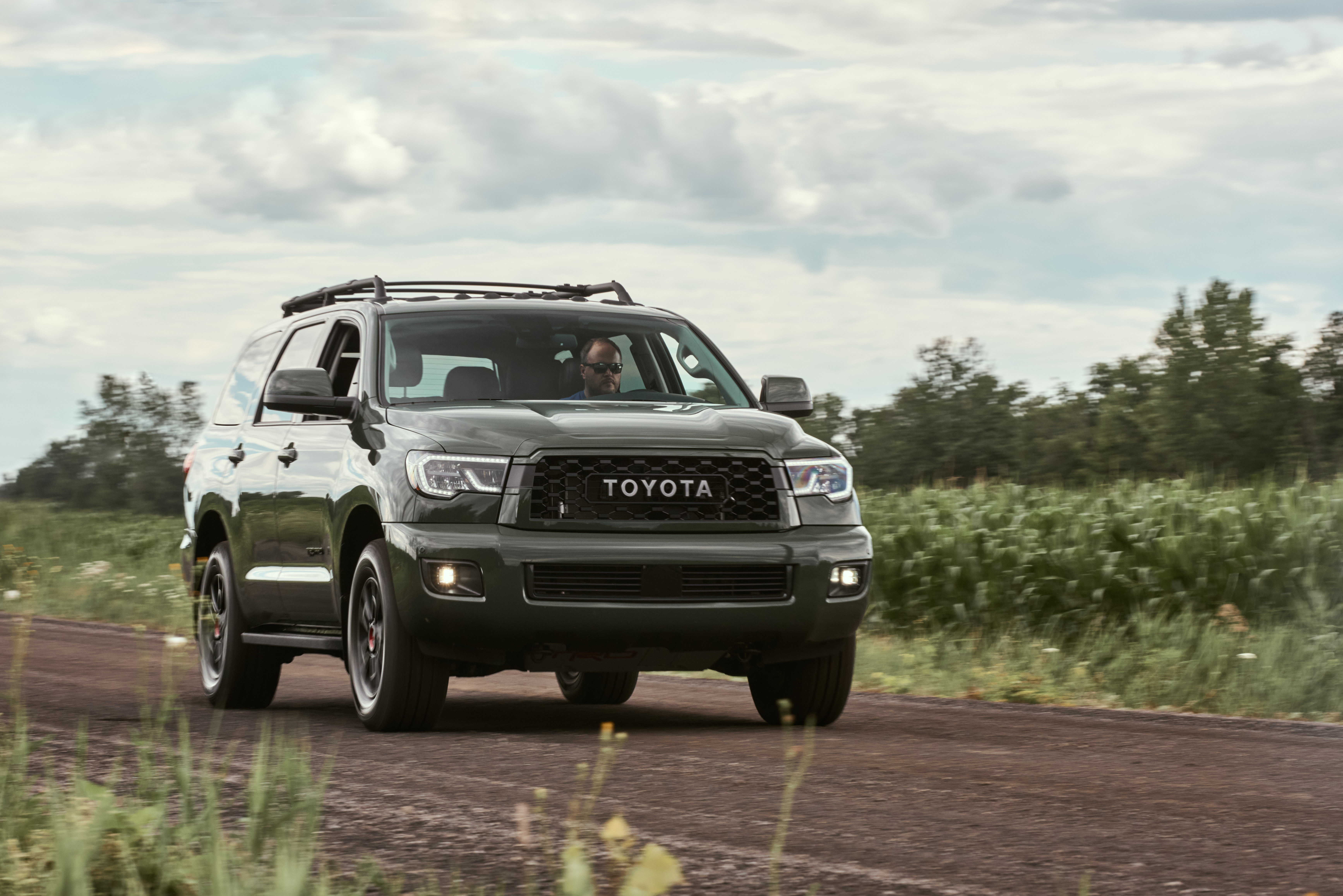 I didn’t spend much time behind the wheel of the 2020 Toyota Sequoia TRD Pro. You see, a few days after I picked up this press unit, the local car wash destroyed one of its rear windows, forcing me to hand the keys back to Toyota. Talk about bad luck. But even if I had the thing for a grand total of three days, it still allowed me to get to know it for what it’s worth. Yes, the Sequoia wears its name well by being old as hell, but man is this thing adorable. 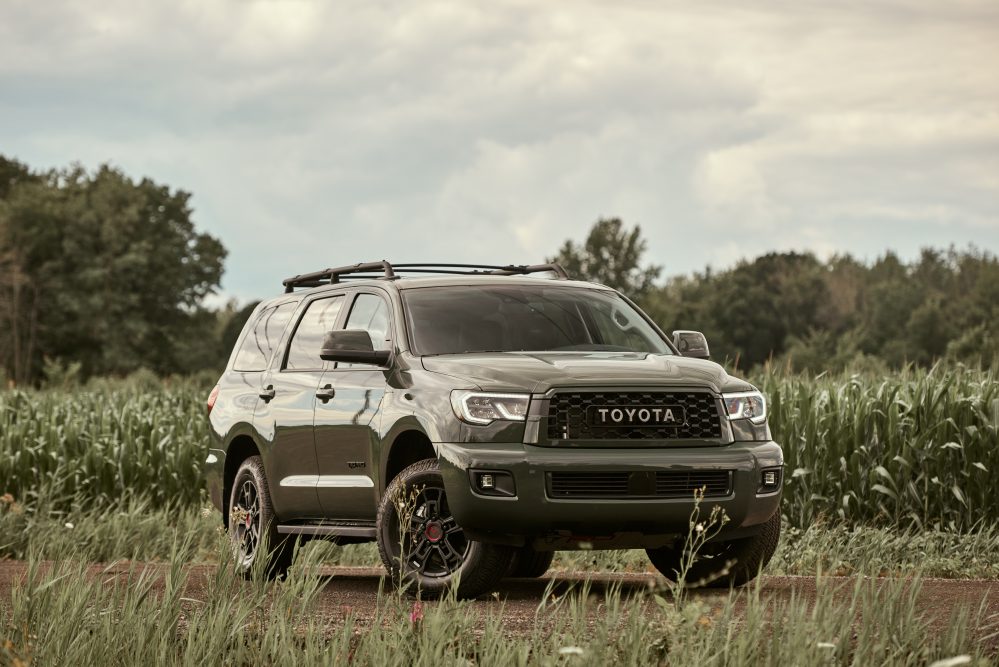 If you’ve been following this blog, you know that I have driven all kinds of TRD Pros, from 4Runners to Tacomas and even Tundras. But I never drove a Sequoia. That’s because Toyota just recently added it to its TRD Pro lineup. Mind you, before it joined the party, I had honestly forgotten this thing still existed. 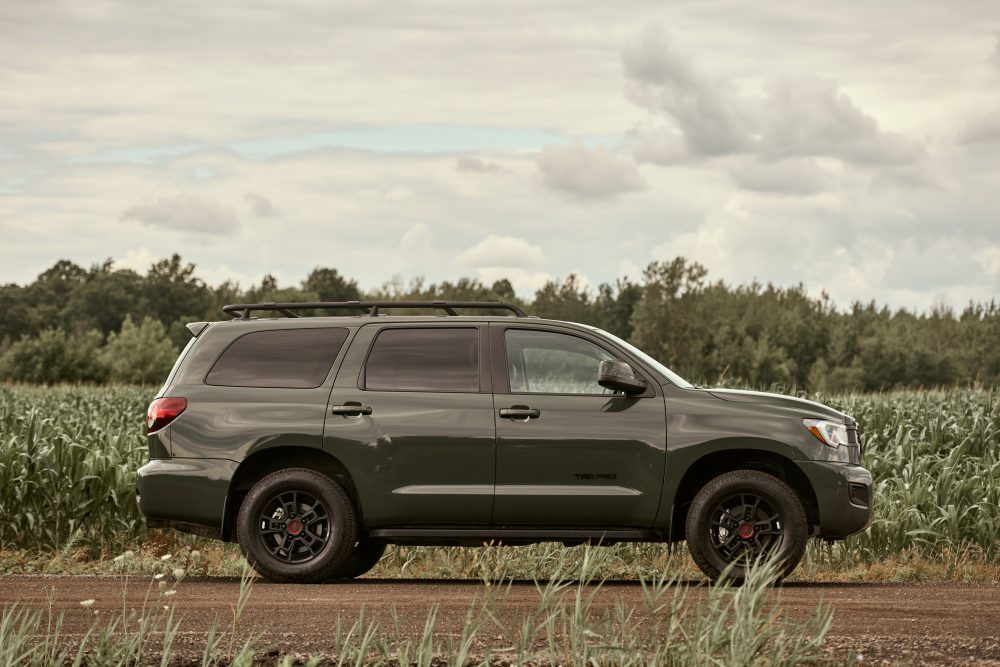 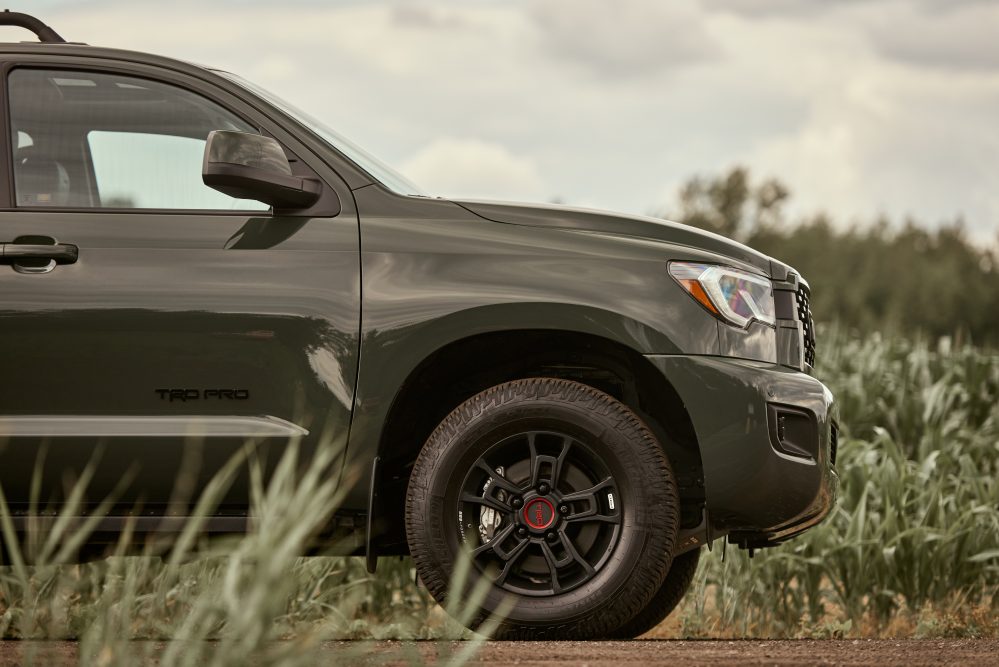 The Sequoia also gets the the now expected TRD Pro look, which manifests itself through a blacked-out front grille with classic TOYOTA lettering, a roof rack and TRD logos splattered here and there. 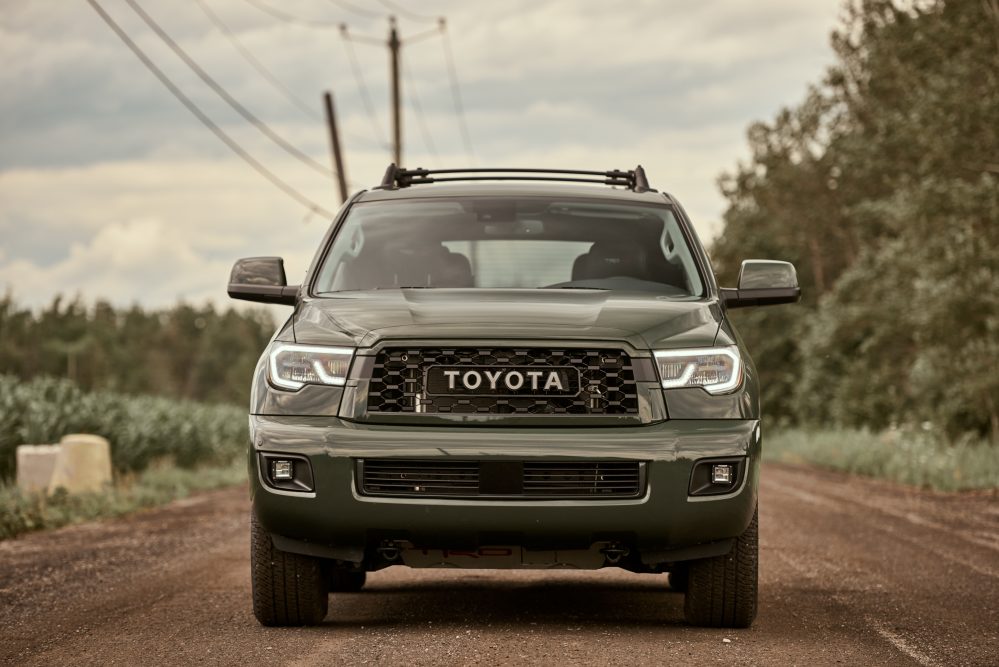 And like its brothers, the Sequoia TRD Pro gets a theme color at each model year. For 2020 the tone is called Army Green, which not only gives the big Sequoia a mean and purposeful look, but also allows it to blend rather well within the environments it was meant to explore. Other colors include Super White, Magnetic Grey and Midnight Black. But honestly folks, Army Green is where shit gets real. 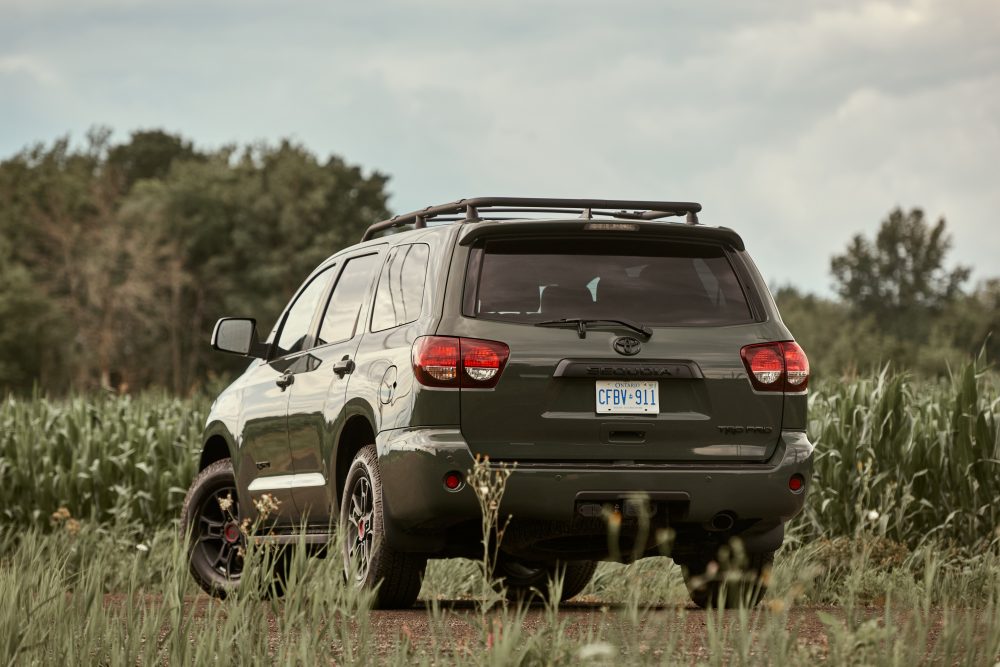 As for the rest, well it’s standard Sequoia stuff, which means it still rides on a body on frame architecture that it borrows from the Toyota Tundra full-size truck. The Sequoia however gets an independent rear suspension for improved road manners, while its entire drivetrain is a direct swap from the pickup truck on which it’s based. 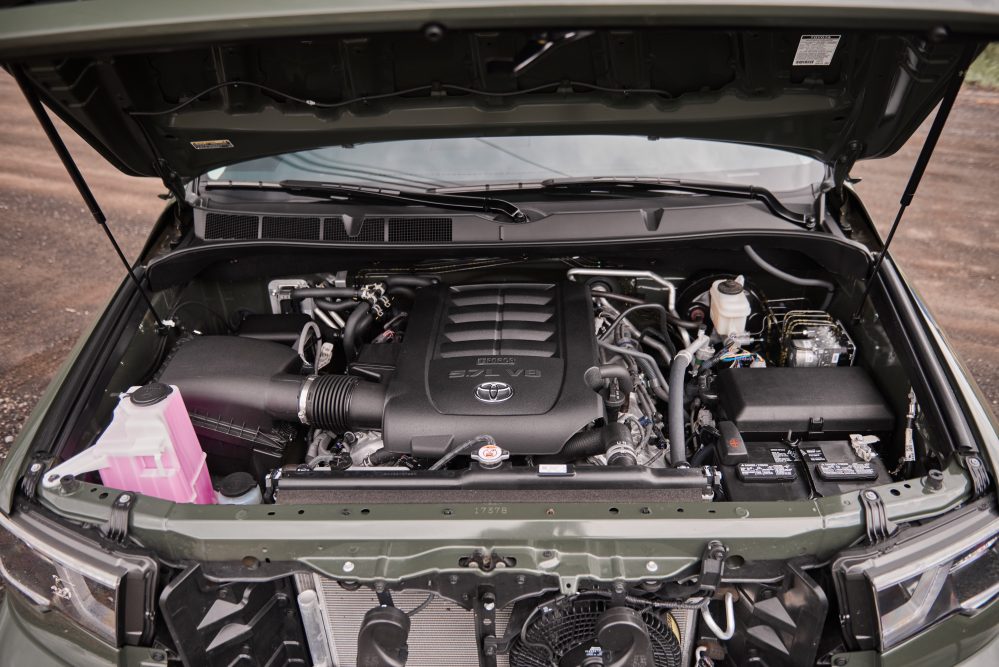 Power comes from a naturally aspirated 5.7-liter V8 good for a very conservative 381 horsepower and 401 lb-ft of torque. Four-wheel-drive with two-speed transfer case comes of course standard, but the TRD Pro adds a Torsen lockable limited-slip differential. The only available gearbox is a very dated, but proven six-speed automatic unit. Max towing is rated at a still competitive 7,000 pounds. 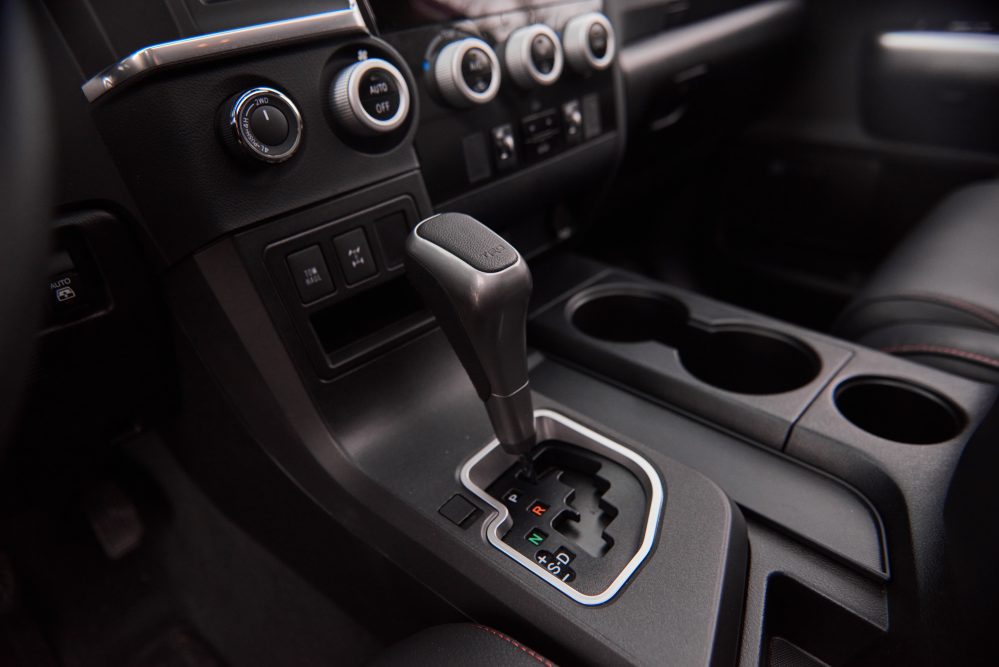 Pricing for the limited edition 2020 Toyota Sequoia TRD Pro kicks off at a very rough $81,289, or if you prefer, $15,660 more than a regular Sequoia SR5, or about a grand more than the range-topping Sequoia Platinum. That’s a lot of money for truck that hasn’t really changed in over a decade. 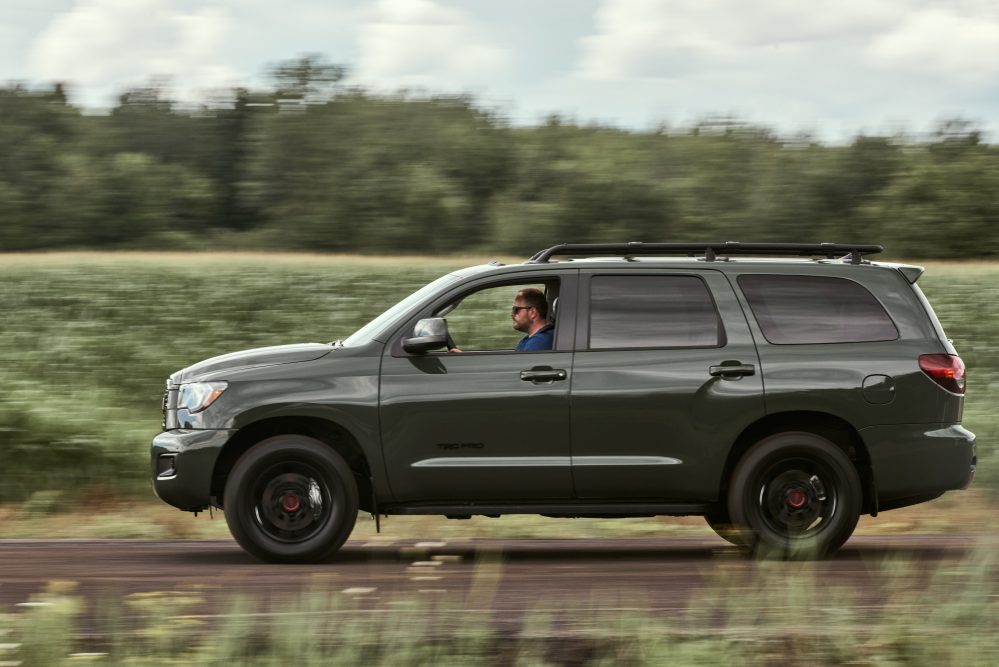 At least, the 2020 Toyota Sequoia TRD Pro is one of the vehicles that retains its value the best at the moment, so you won’t lose too much on your investment. The only thing you’ll need to worry about is how heavily stolen these things are. Expect high insurance premiums because of that. If you can, lock this bad boy up in a garage when you’re not driving it. 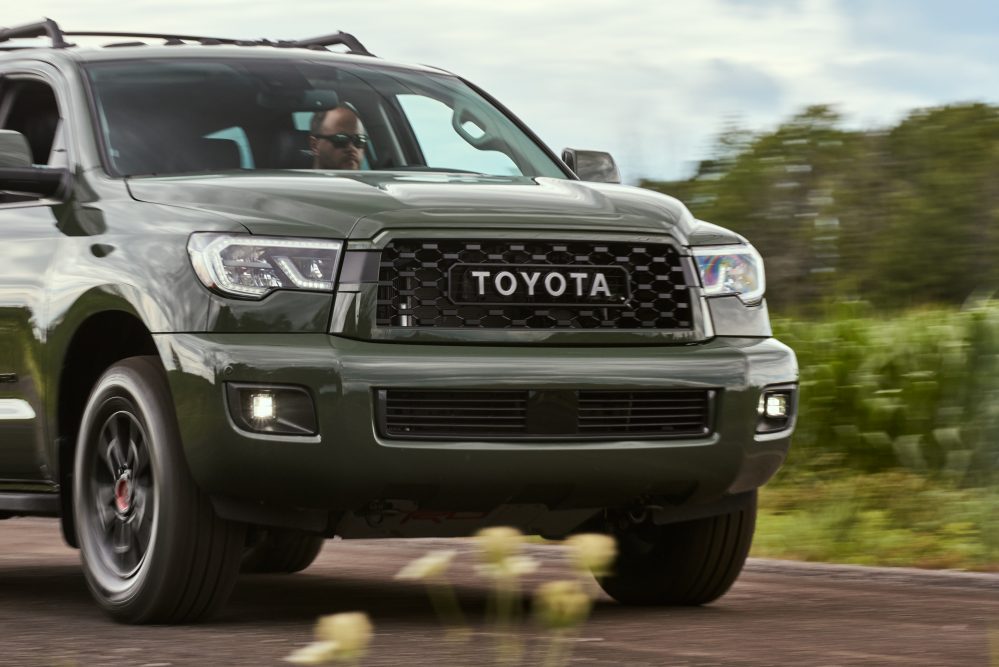 When you do get a chance to drive it though, I highly suggest throwing it in the mud to sample its off-road capability, which I must say, is rather impressive given its rudimentary technology. This big guy will basically carve its own path, and I reckon a simple lift kit will allow it to do incredible things in a trail. However it is a bit large for most trails. I personally prefer something a little smaller and nimble like, say, a 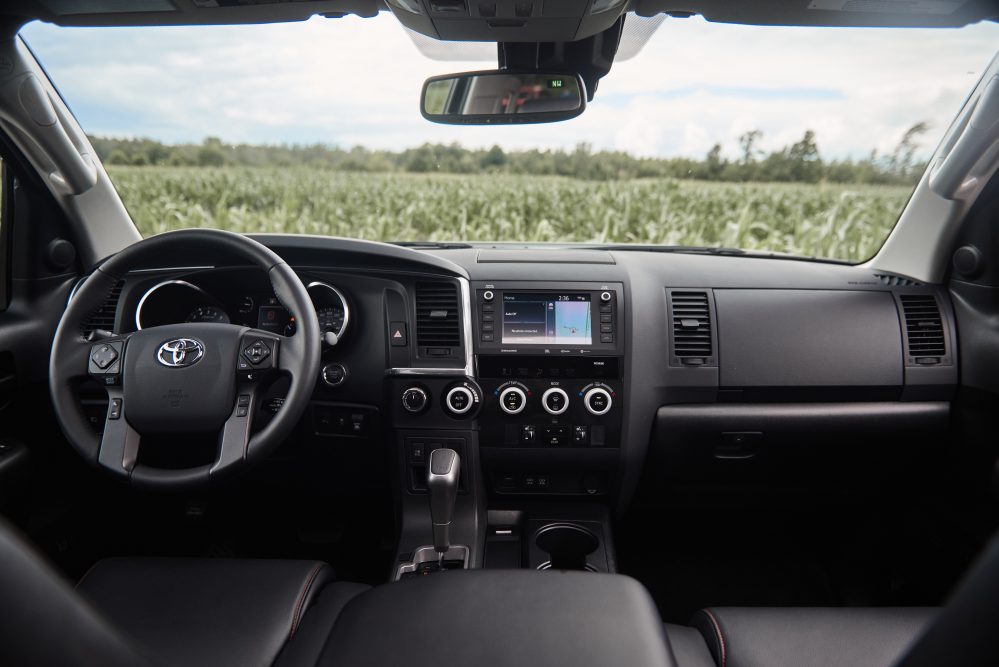 Climbing inside a Sequoia feels like hopping aboard a time capsule. Its dashboard design seems like it’s taken from an entire different era. I’ve personally seen better cabin materials in a U-Haul Ford Econoline. That said, the Sequoia is a comfortable and spacious truck to spend some time in. The seats are cushy and supportive, and the rear is enormous cabin area is enormous. 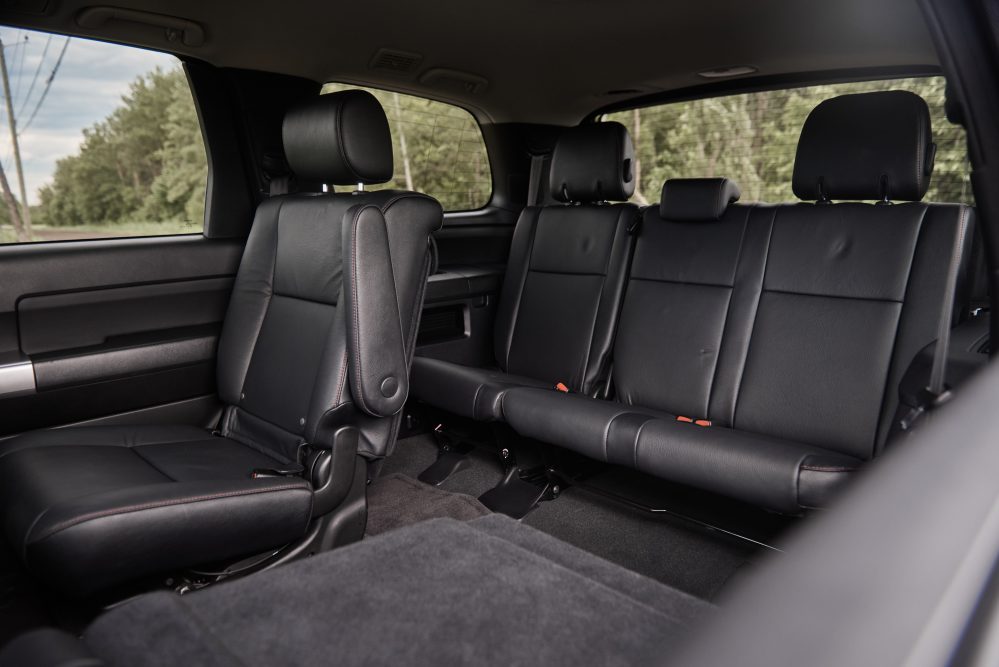 As a matter of fact, this is one of the only three-row SUVs in which I actually fit comfortably in the third row. And like the 4Runner, the Sequoia comes with a roll-down rear window, a feature that will forever be cool as hell. 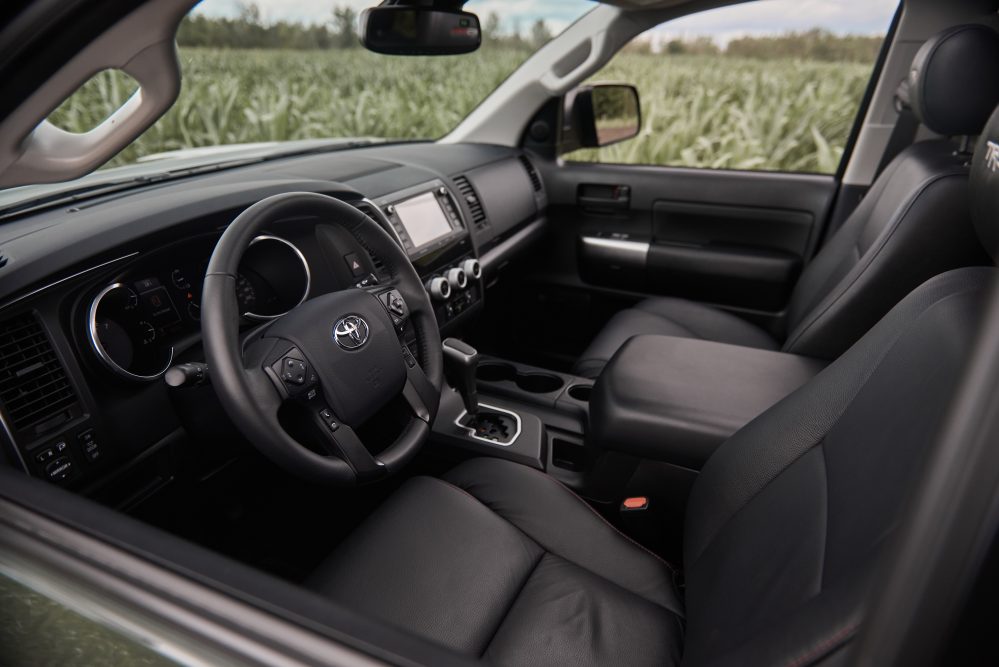 I also personally love the tiny little “bridge” panels you can install between the seats to create a large flat floor when the seats are folded flat. It’s perfect for camping; something I was supposed to do with this big guy before that carwash ruined my plans. 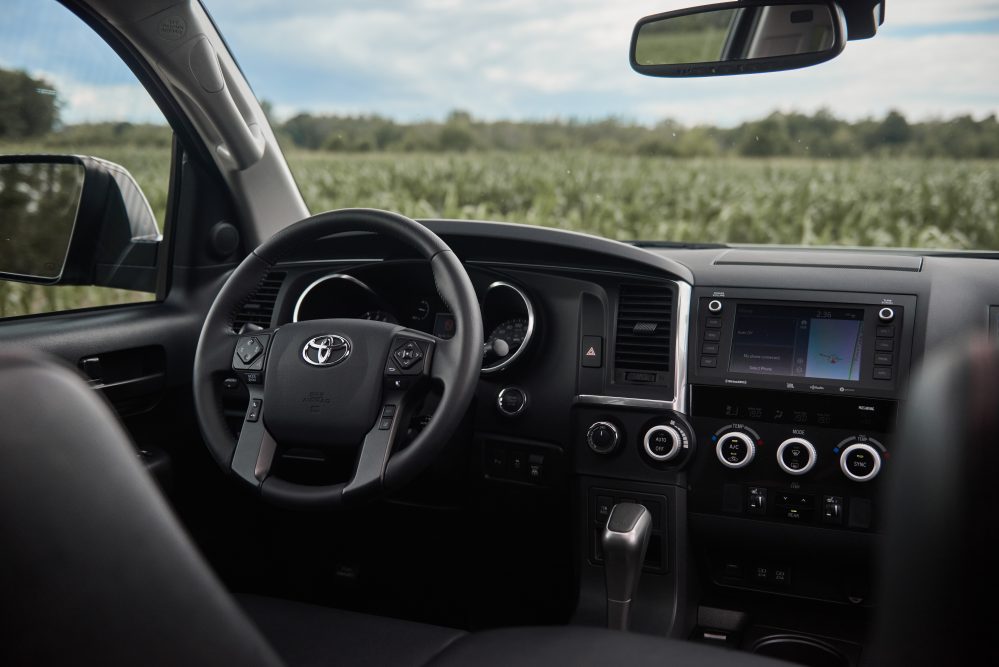 So, the Sequoia’s dashboard looks plain and ugly, but it has an enjoyable simplicity to it that you don’t get from modern trucks. Everything is where it should be, buttons are easy to grasp and operate, and even the infotainment system – while old by its dated interface – has modern features baked into it, like Android Auto and Apple CarPlay connectivity. 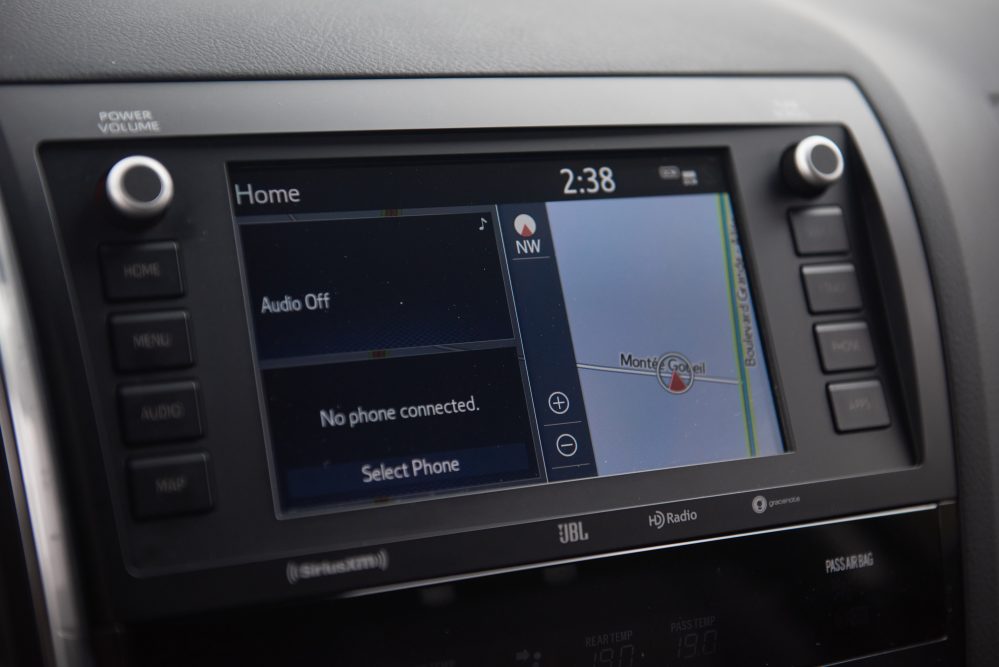 The Sequoia also comes standard with some handy safety technology, things like automated forward emergency braking with pedestrian detection and adaptive cruise control. You know, in case you encounter a moose in the trails. 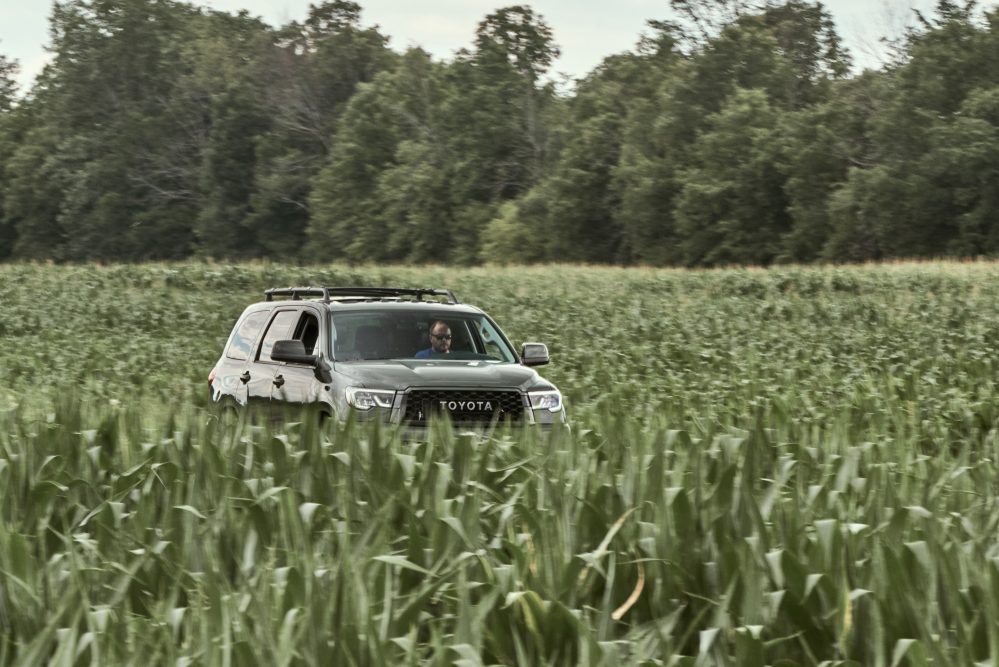 On the road, the Sequoia drives pretty much like a Tundra with a body, which means it rides like a truck, but exhibits more refined road manners thanks to that independent rear. Its V8 engine still pulls incredibly well, offers ample low-end torque, but nevertheless feels a tad more sluggish than competing American offerings. Meanwhile, the six-speed gearbox gets the job done, without really doing anything better than modern systems. 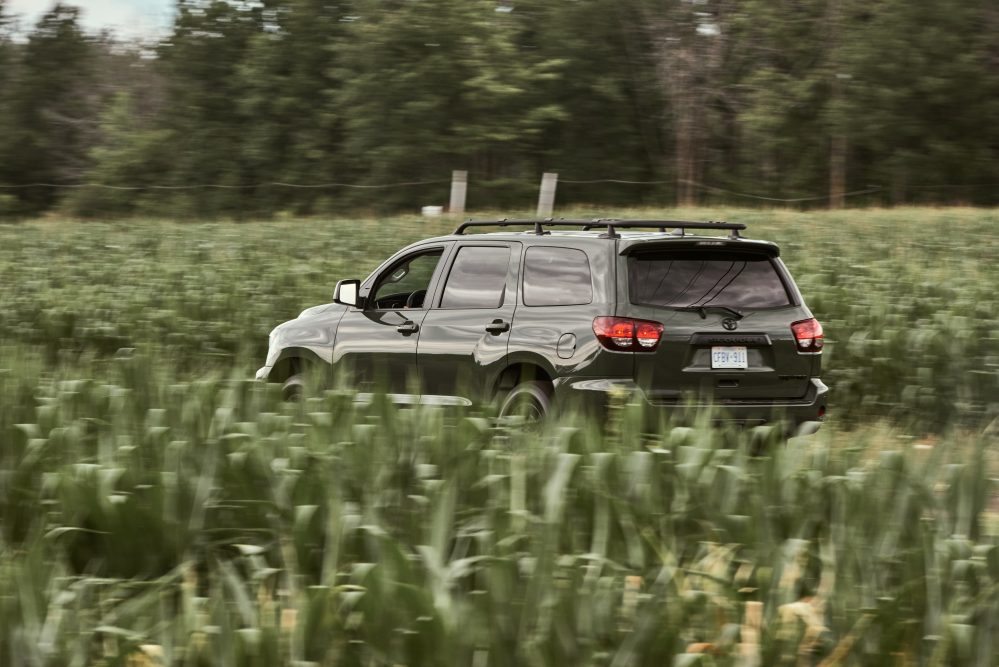 The lack of gears does however mean the Sequoia is a gas hog, with fuel economy numbers ranging in the vicinity of 14L/100 km. That’s a good 3L/100 km more on average than a Chevrolet Tahoe or a Ford Expedition. 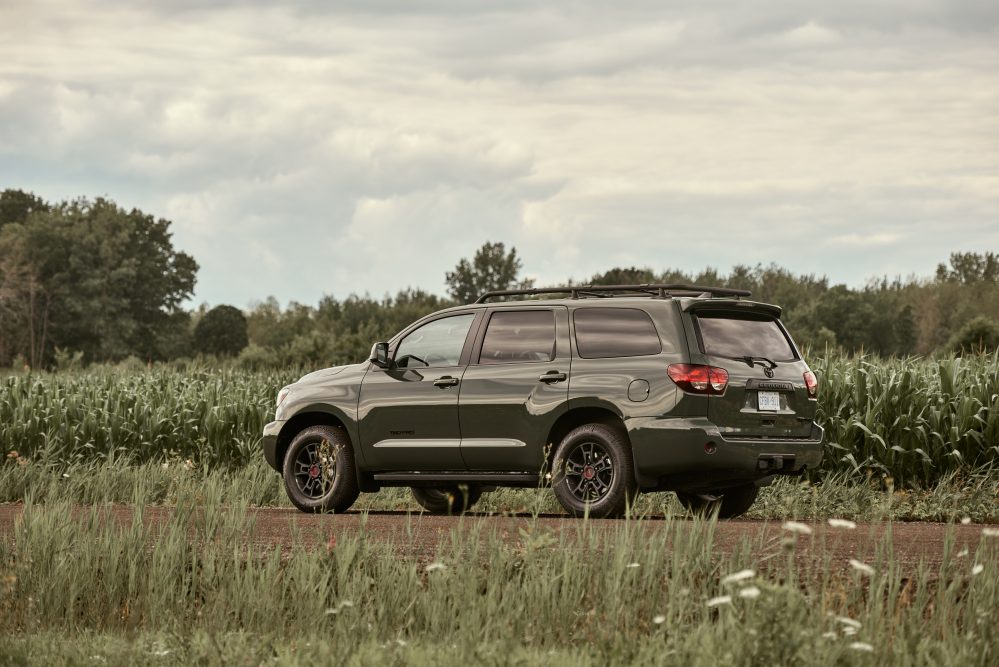 On paper then, there are many reasons why you should avoid the 2020 Toyota Sequoia TRD Pro and opt for something American instead. But unlike its direct Japanese rival, the Nissan Armada, the Sequoia is actually desirable, still very capable, and unbelievably reliable. These are the elements that make it one of the most charming large SUVs currently on sale. 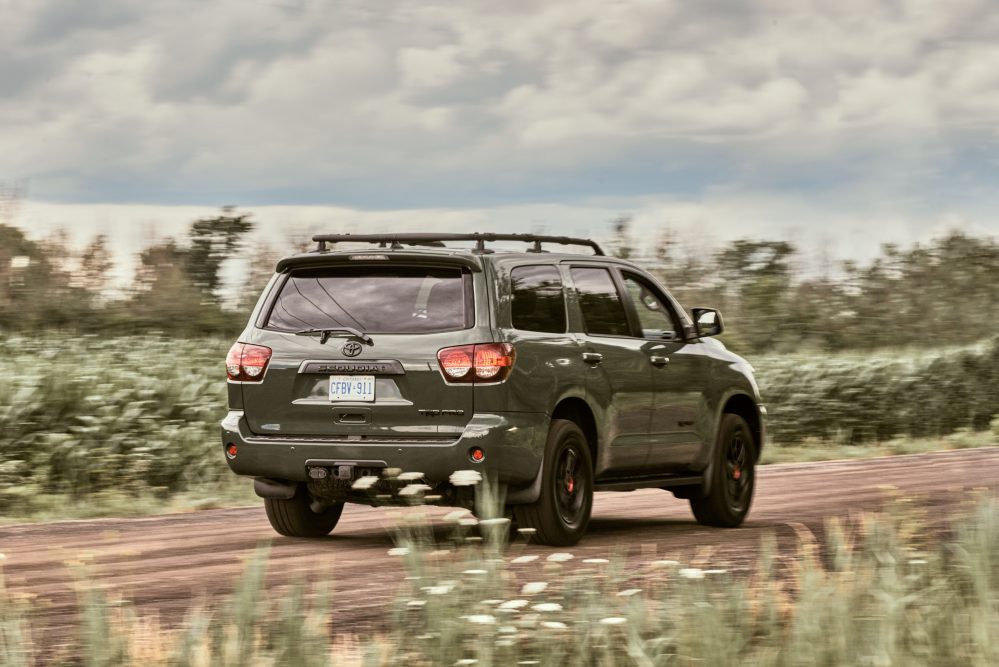 If you’re looking for something to drive your family through the apocalypse, this is the large SUV you need. Yes, it’s expensive, crude and not all that sophisticated, but it gets the job done. It won’t let you down, and ten years down the line, it’ll have retained more value than a Porsche 911.