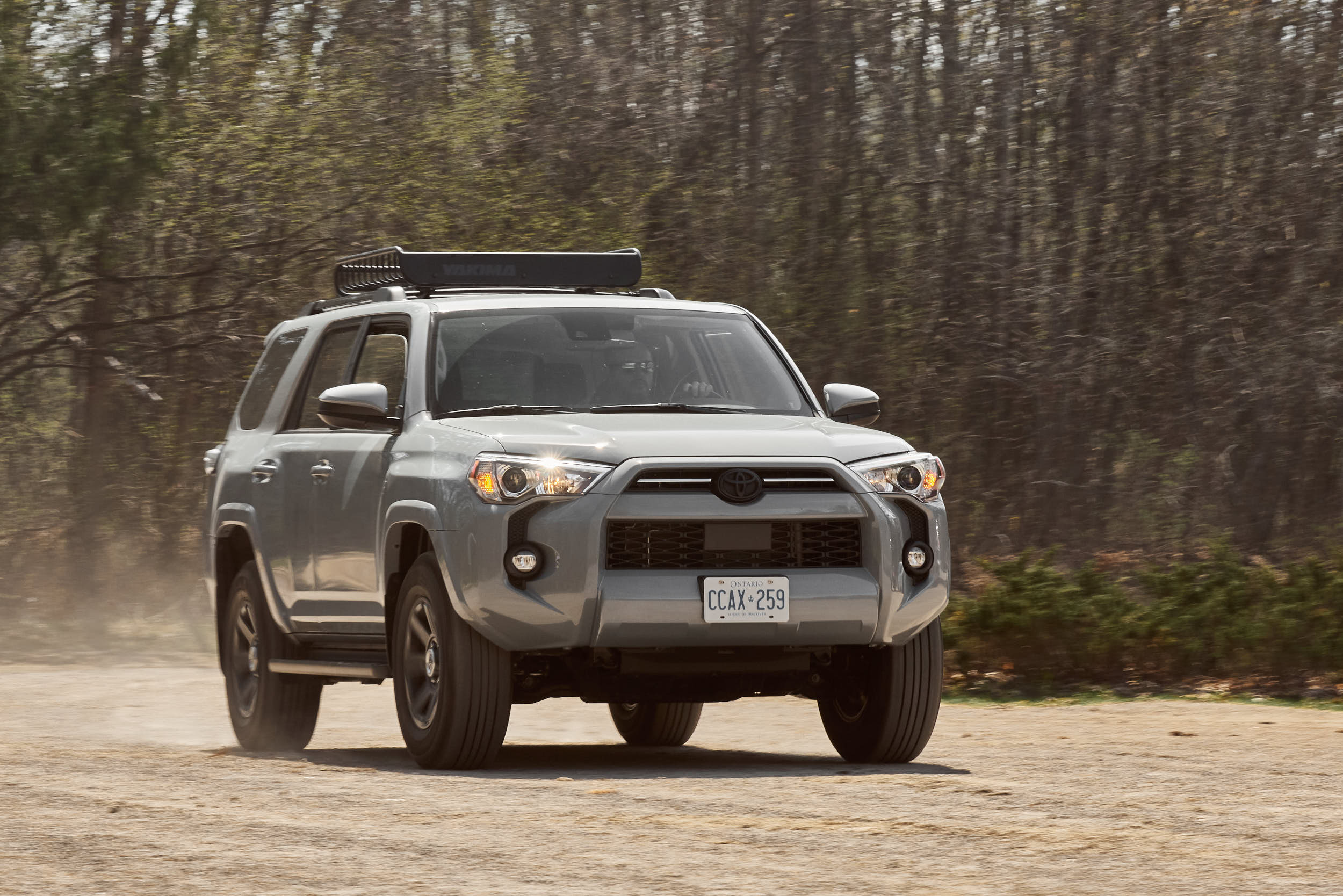 The 2021 Toyota 4Runner is one of the oldest cars currently on sale. I mean, except for a paint job and a few minor cabin updates, the truck you see here is essentially identical to the one I drove back in 2017. It was old as hell even then. So why am I talking to you about it? Because it’s a 4Runner, one of the most desirable and capable off-road machines you can buy. It’s also one of the last true sport utility vehicles available, which is why I felt it was important to give it some attention.

As Solid As Cement 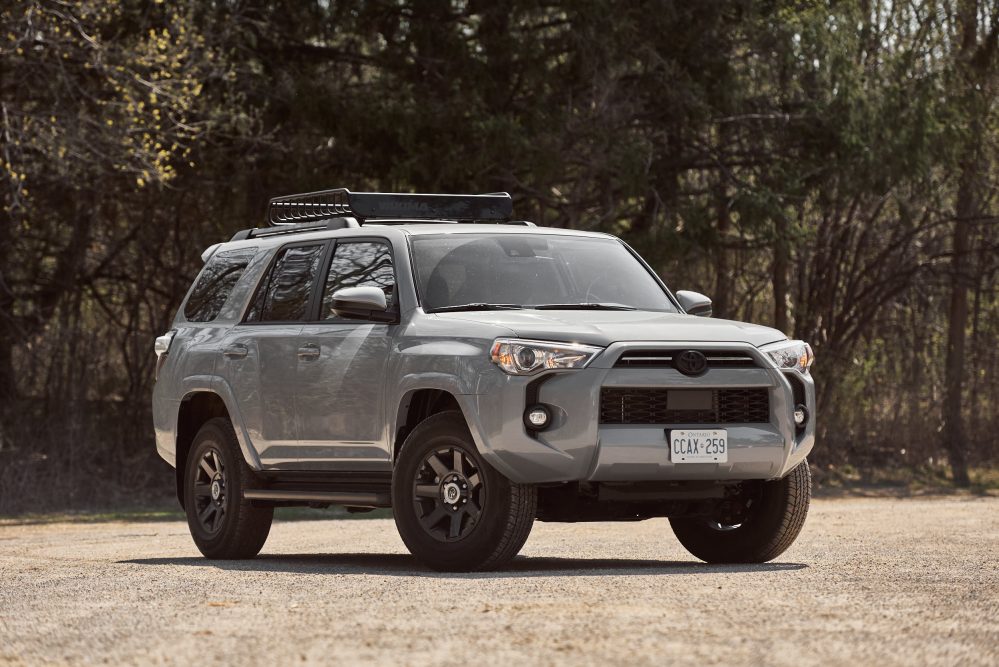 It’s no secret that the 4Runner has garnered itself a fair share of enthusiasts. Like its little brother, the Tacoma, Toyota’s adventure-ready SUV carries with it a bulletproof reliability, cheap repair costs and high resale value. I challenge you to find a clean second-hand one at a decent price. You won’t find it. Even when they’re rusted to shit 4Runners still sell for a fair sum. 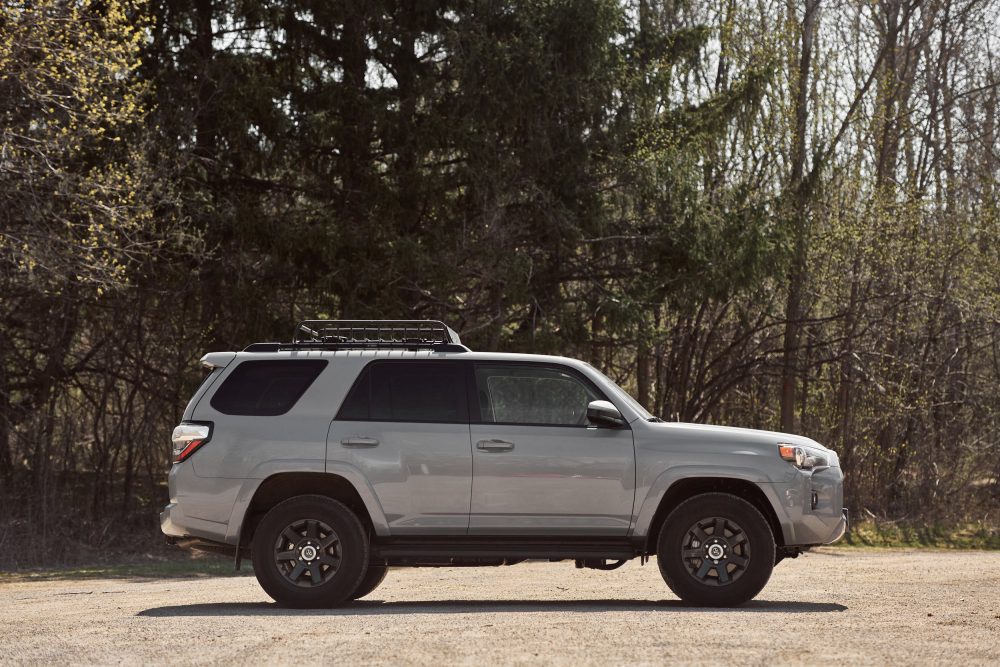 Toyota understand this and prefers playing it safe. A new 4Runner is in the horizon, thank god, because with a significantly more modern Jeep Wrangler in the house, as well a new plug-in variant, the 4Runner just got seriously ancient. But we’ll need to wait, because the next-generation truck won’t happen until Toyota unveils the new Tacoma, which could only happen next year. So while we wait, some slight updates were applied to the current lineup to keep it fresh. 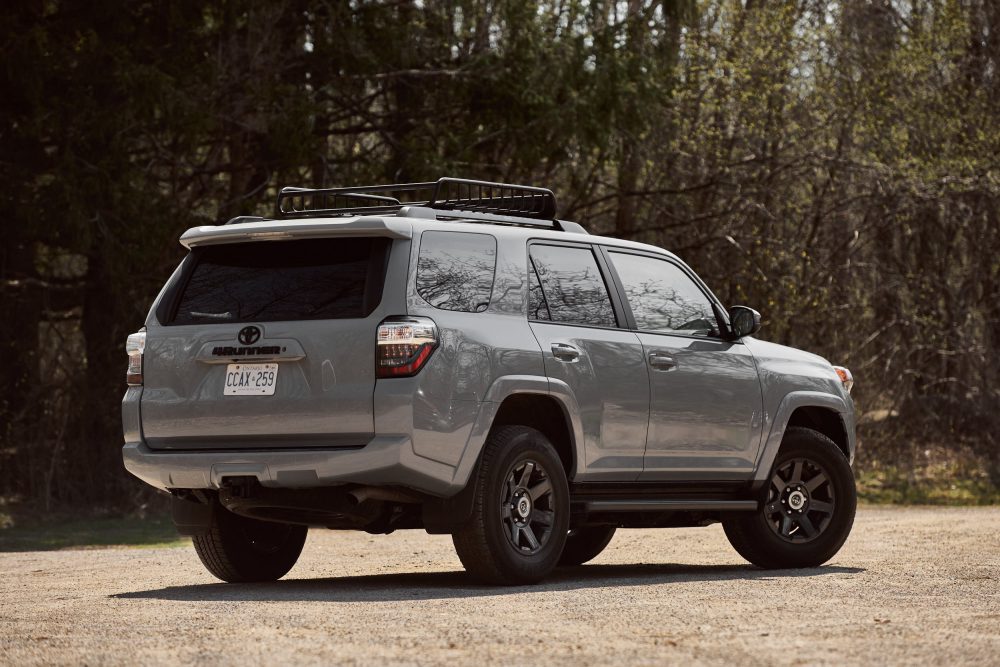 It’s all mostly made up of trim packages, wheels and paint colors, but it does enough to spice up this utilitarian vehicle’s appeal. The model you see here is the entry level 4Runner Trail, the cheapest of the available trim levels at $48,559. It comes with only two available colors, Army Green and this Cement matte grey. All Trails come standard with dark grey TRD 17-inch wheels, chrome delete all over and a Yakima roof rack. 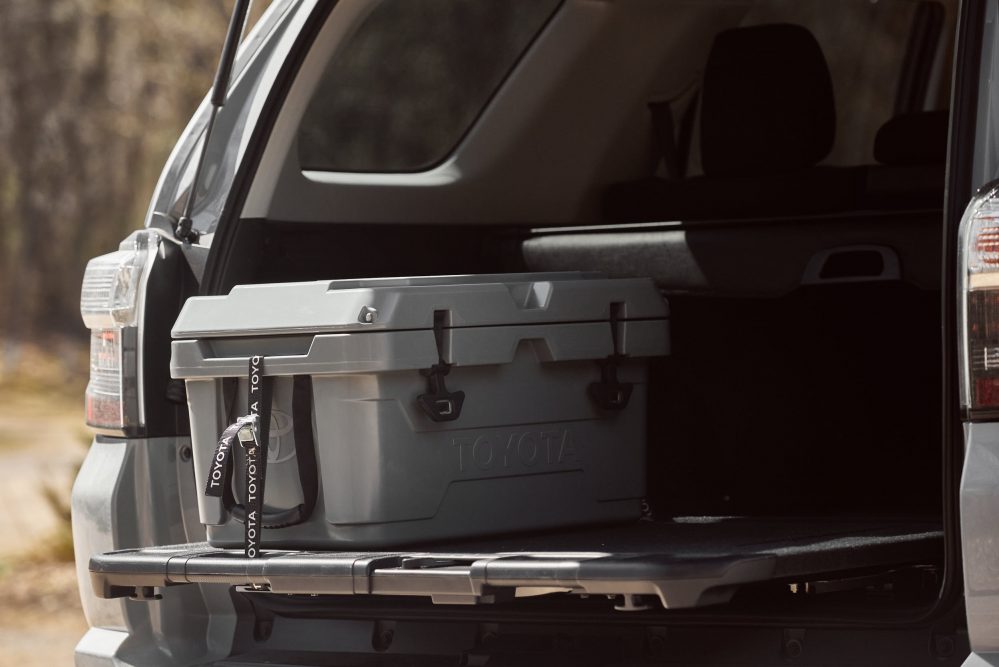 For the 2021 model year, the vehicle gets standard LED headlights. Mine also had the optional TOYOTA trunk-mounted cooler that looks so damn sick. As you climb the ladder in the trim hierarchy, where the TRD Pro towers the range, you end up with a final sticker price of $64,789. 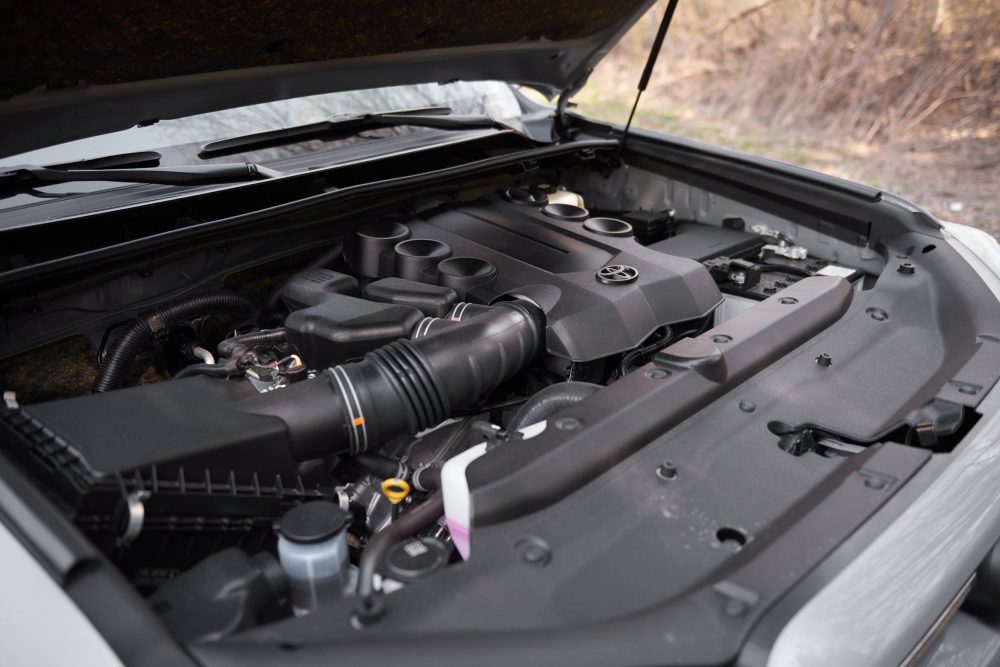 All 4Runners are powered by the tried and proven (and old) 4.0-liter V6 with 270 horsepower and 278 lb-ft of torque. It’s all mated to a rudimentary five-speed automatic gearbox. Four-wheel drive is obviously standard here in Canada. The Trail comes with a basic selectable setup, while higher trim levels get full-time AWD, electronically controlled off-road assistance systems as well as lockable differentials. 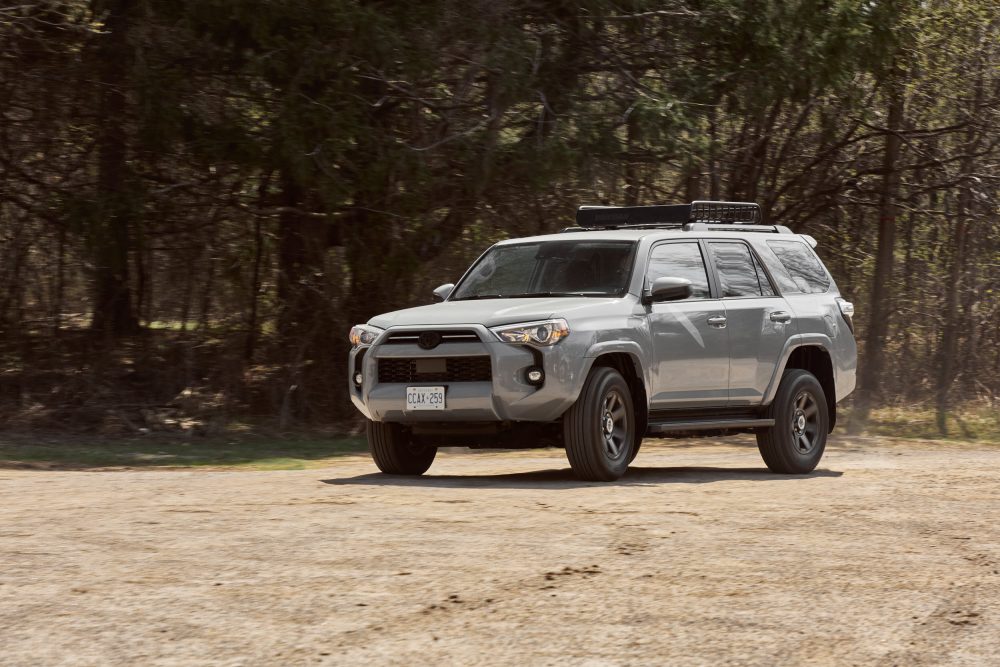 The fact that the 2021 Toyota 4Runner is old also means it’s a hard one to live with for daily driving. From the get-go, its body on frame architecture was never designed for refined urban driving. Sadly for this Toyota, there are newer vehicles of this type that are much more sophisticated. Body roll is unsprisingly high in a 4Runner, and the entire thing feels clumsy at speed. That roof rack is also loud when driving on the highway, and fuel economy is  ridiculous. I could barely keep it under the 14L/100 km mark. 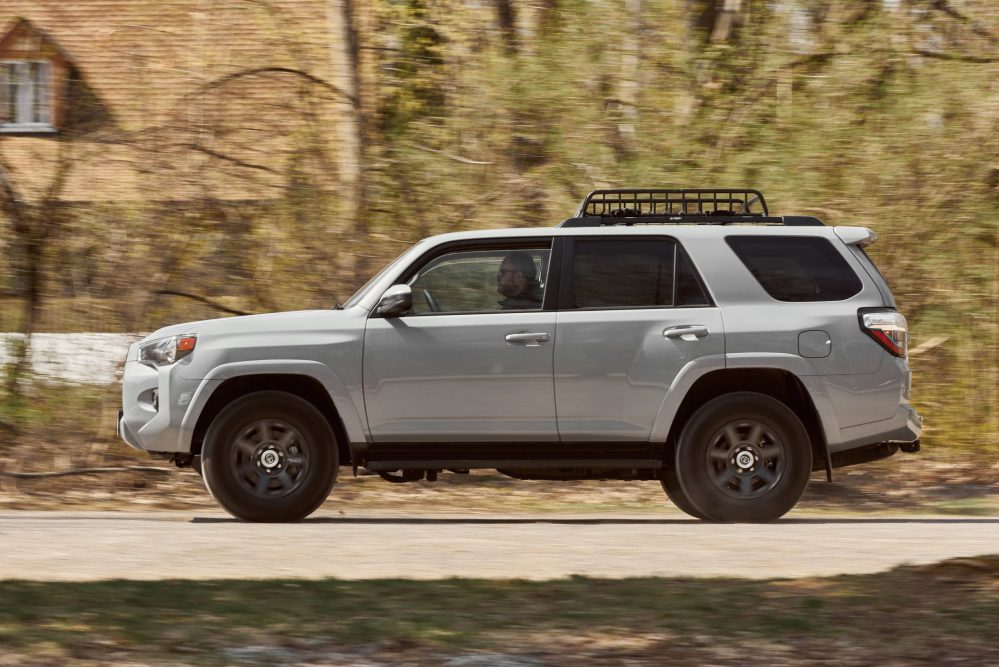 The V6 engine still provides good power, and while it’s missing gears, the transmission does what it has to do rather well too. While never particularly refined, acceleration in a 4Runner is above average. It’s also a vehicle with a lot of character, one that instantly makes you want to take off on an adventure. It’s the definition of what a Sport Utility Vehicle should be. And while the suspension always leans to the soft side, the brakes bite hard, a handy quality during emergency urban stops. 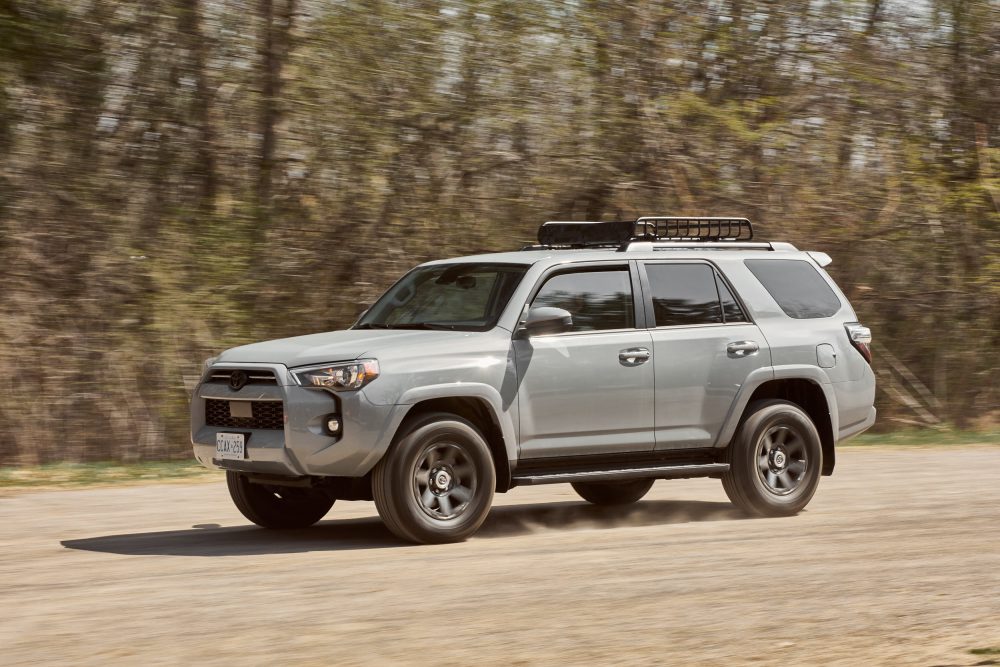 In a beaten trail, this remains a capable and reliable companion. There’s no denying the 4Runner’s off-roading abilities in all its forms. The hydraulic power steering system has just the right amount of resistance during crawling situations, and disengaging the four-wheel-drive system is done in the blink of an eye. 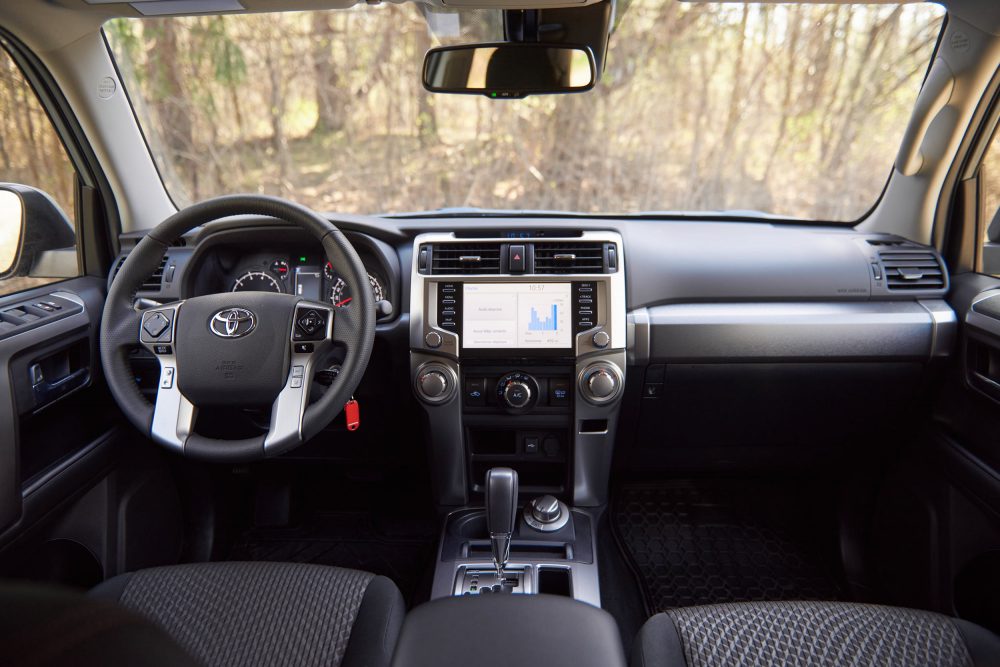 Inside, the 2021 Toyota 4Runner’s dated and utilitarian dashboard design won’t impress buyers of car-based crossovers, but it remains highly functional. There’s still a physical key to start it and analog gauges, but their readout is plenty good. There’s also a good amount of storage area to throw your phone or any other junk you may have. The classic 4Runner rear window remains a pleasant touch, and the cabin is spacious, with plenty of rear head and legroom as well. However the seats, as well as overall cabin materials look and feel shabby. 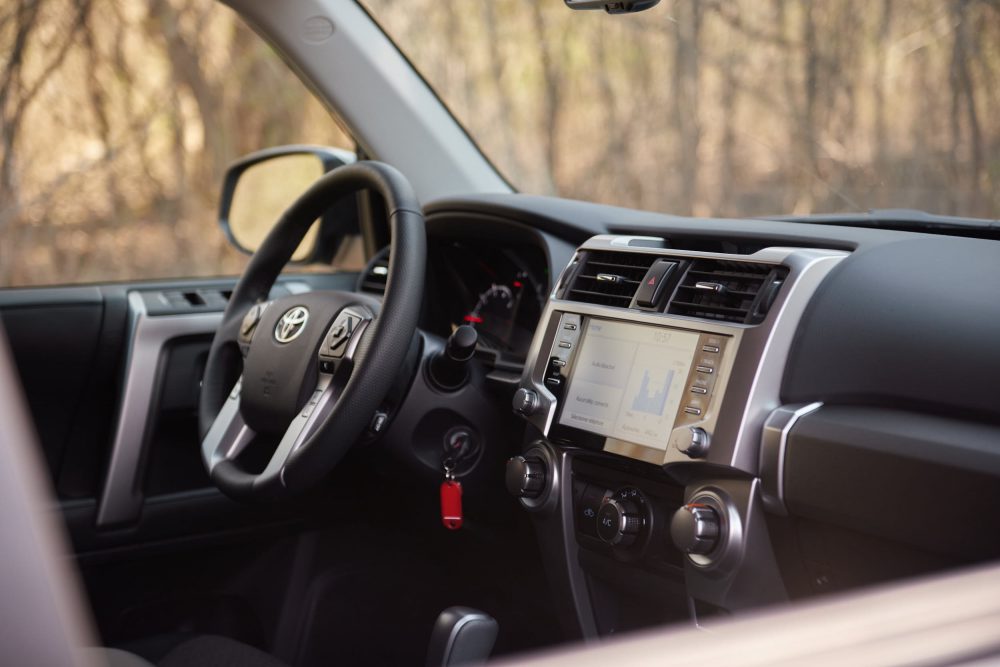 Toyota also considerably updated the infotainment system. It now gets the Entune software found in other Toyota vehicles and a new eight-inch screen. Android Auto and Apple CarPlay are standard. as well as a subscription-based Wi-Fi hotspot. The system’s operation is somewhat fluid and straight forward, but like all Toyota systems of late there’s a bit of confusion in the user experience. Finding simple information or features can at times be teadious. 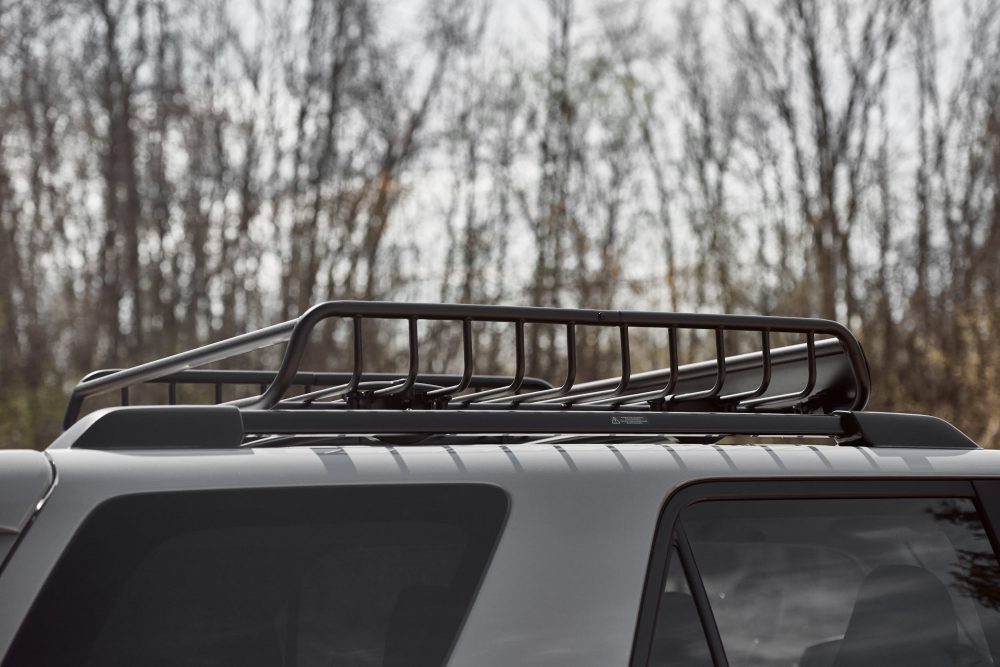 As far as being an SUV goes, the 4Runner is still amazingly competitive. Towing is rated at 5,000 pounds, putting the 4Runner up there with larger three row sport utility vehicles. Cargo space is also ample, with 2,540 liters of room to throw your gear when the rear seats are folded flat. This eclipses all other vehicles of this class. Even newer offerings like the Honda Passport (2,208 liters) and the Volkswagen Atlas Cross Sport (2,203 liters) can’t beat it. 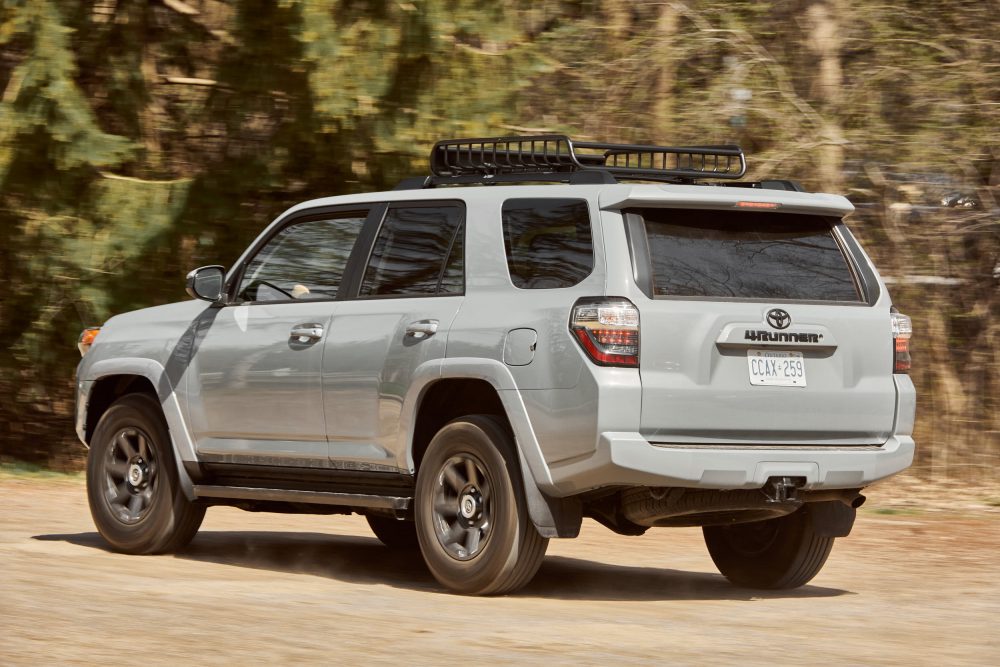 If you’re looking for a midsize two-row SUV that comes with a bit more attitude and ruggedness, as well as an entire community of enthusiasts and aftermarket support, then you’ll be served with the 2021 Toyota 4Runner. Refinement isn’t its thing, but it remains highly capable, customizable, practical and reliable as well. When kept in good shape and running well, these things quickly become automotive investments, which is why it’s almost impossible to not recommend buying one.