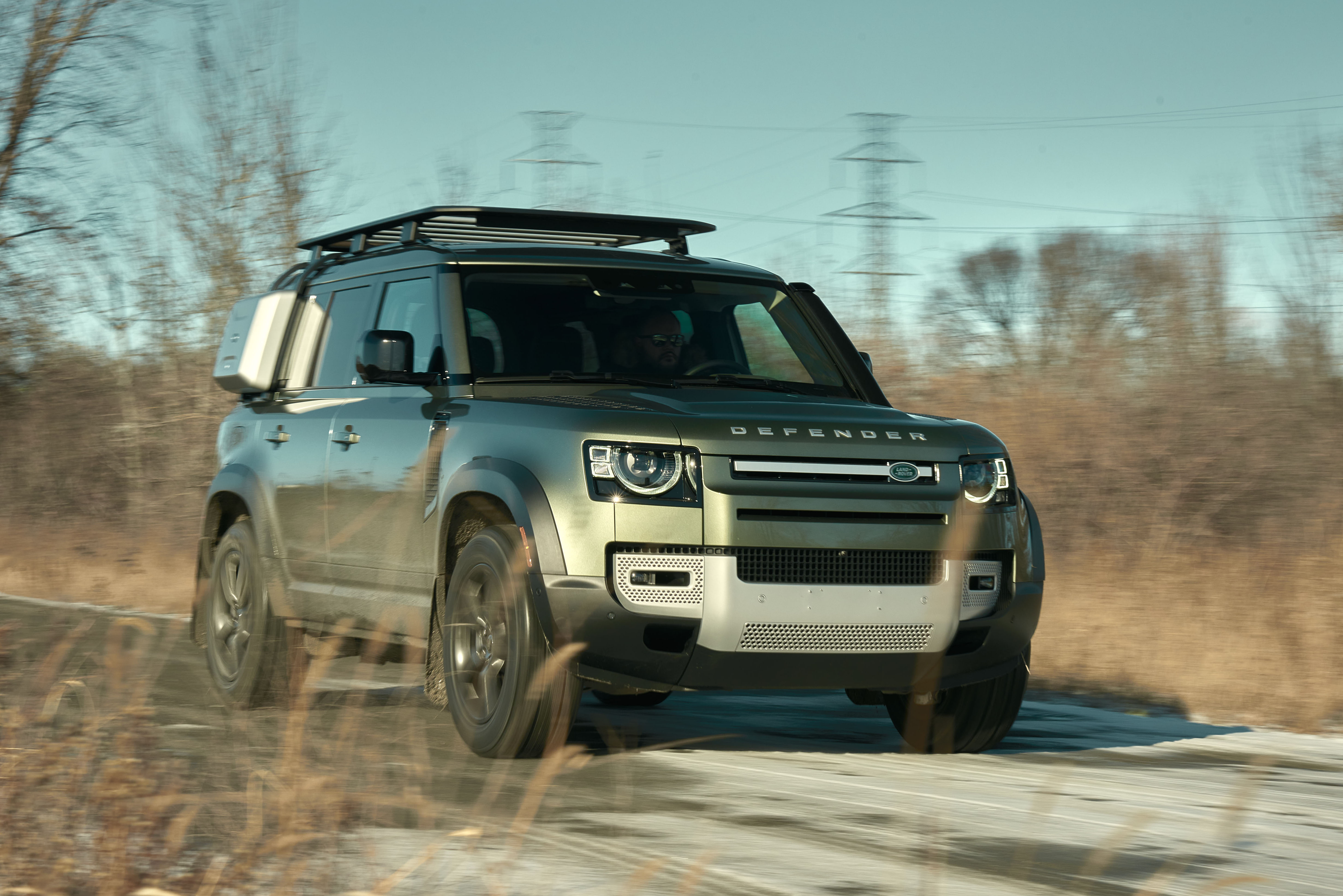 The 2021 Land Rover Defender was one of 2020’s most highly anticipated vehicles before the global pandemic hit. Then came the arrival of the Ford Bronco, plus a Jeep Wrangler with a 6.4-liter HEMI underneath its hood, and suddenly we (by we I mean I) had completely forgotten about the Defender. Except, it’s finally here, and it’s exactly what we expected. Well, not exactly since we expected a body on frame replica of the original, but it doesn’t matter. Because this thing kicks ass anyway. 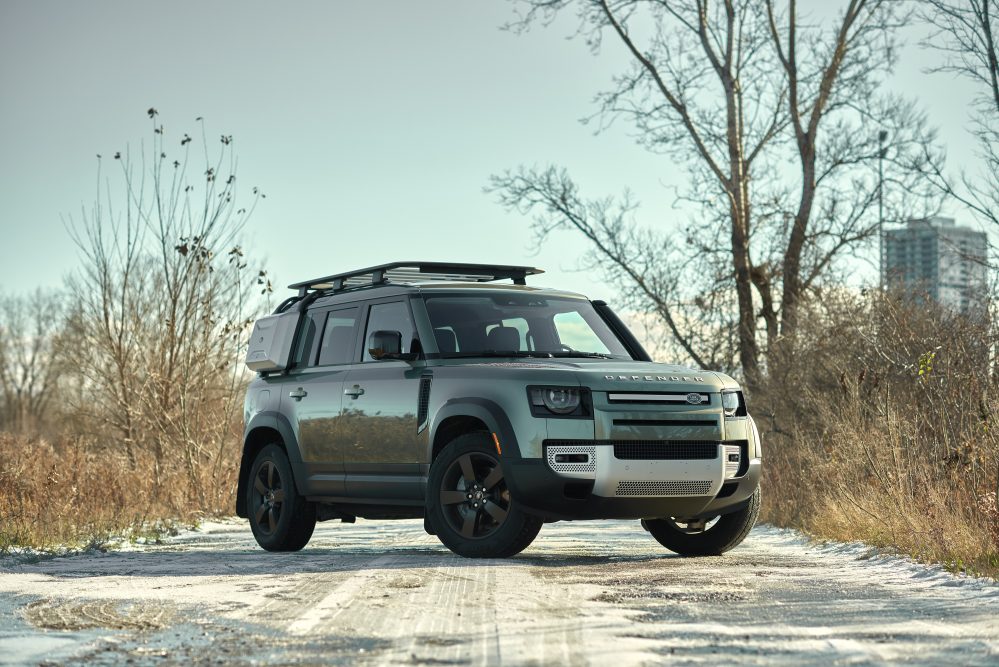 Like its predecessor, which hasn’t been sold on our shores since the late 1990s, the 2021 Land Rover Defender comes in two available wheelbase, or commonly known as the 90 and the 110. The one you see here is the long one, or the Defender 110, which only comes in a four-door configuration. I personally prefer the two-door model because it kind of looks like an expensive Wrangler, but this is still cool as hell. I mean, it’s basically a children’s toy truck turned real. 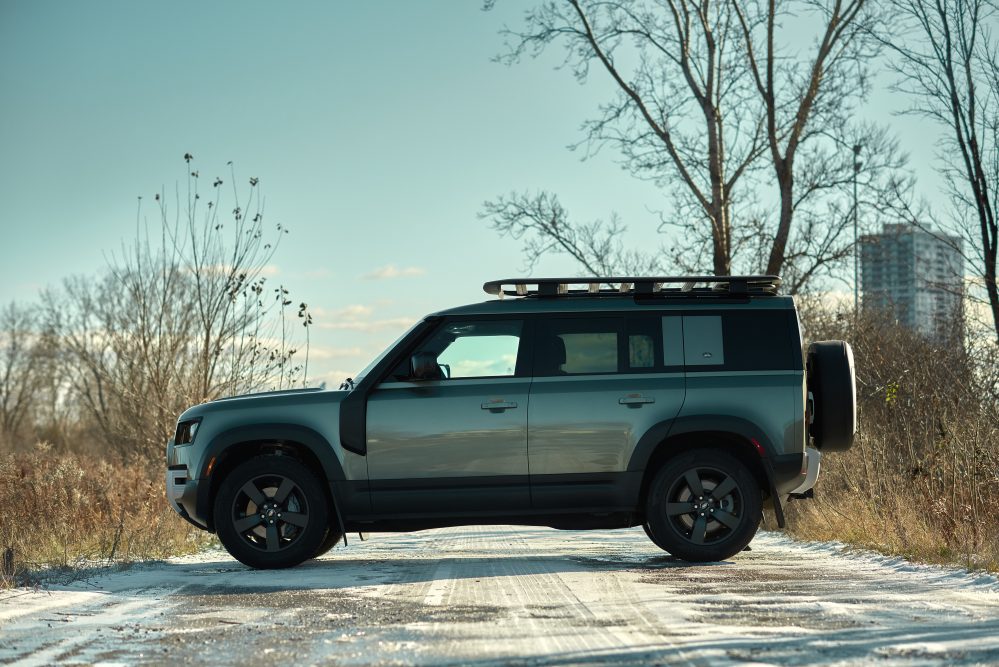 However, things don’t end with the wheelbase. The amount of customization possibilities with this thing is almost endless. Once you select your ideal length, there are three variants to choose from; the regular Defender, the Defender X-Dynamic and the Defender X. The one you see here is a Defender X-Dynamic. Then, you choose one of two specification packages: SE – which is what I had -, and HSE. 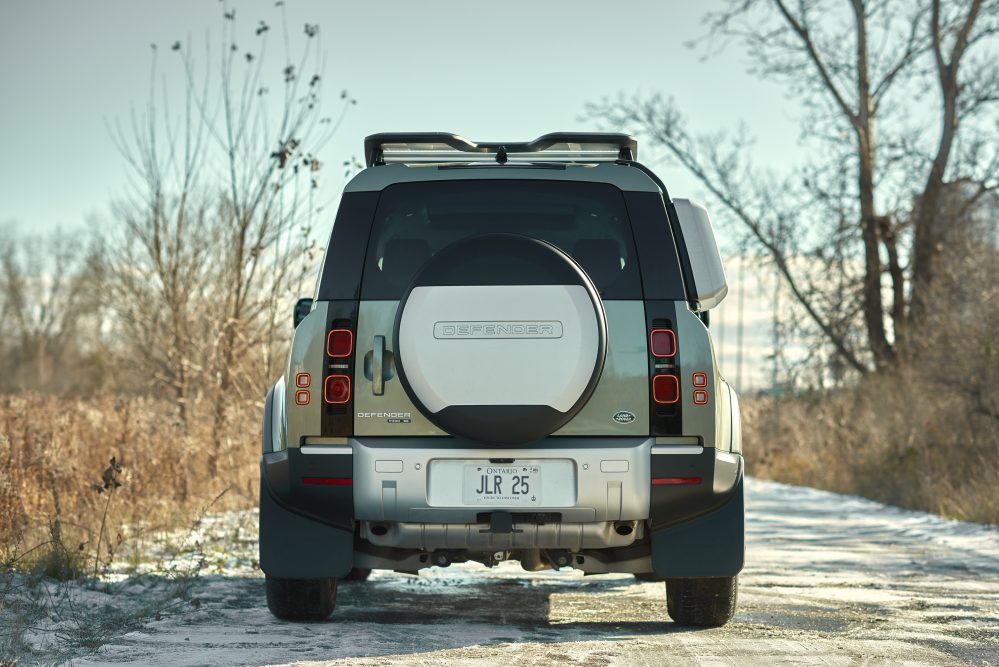 Once that’s sorted out, you select your accessory packages, which range from this Explorer pack (a $5,999 option); arguably far the coolest pack of all because it adds a snorkel air intake, classic mud flaps, a kickass roof rack and that exterior side-mounted gear carrier, which I have no idea what you’re supposed to throw in there, but rad nevertheless. 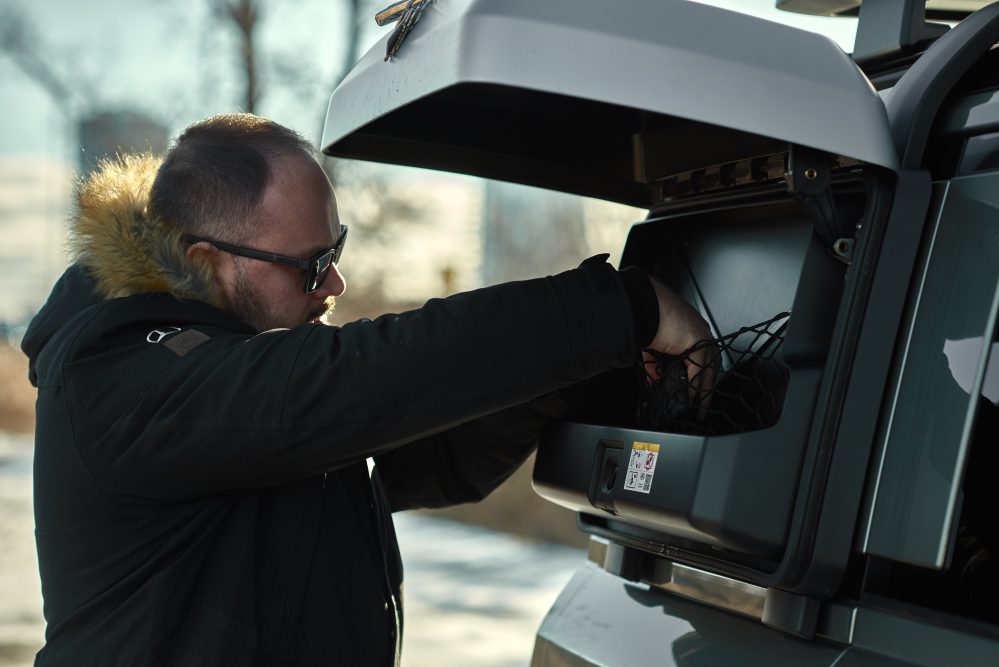 Other accessory packages include the Adventure pack, the Country pack and the Urban pack, which gives the Defender a classy, mall-crawler look, which I’m not a fan of, but I get why some might love it. 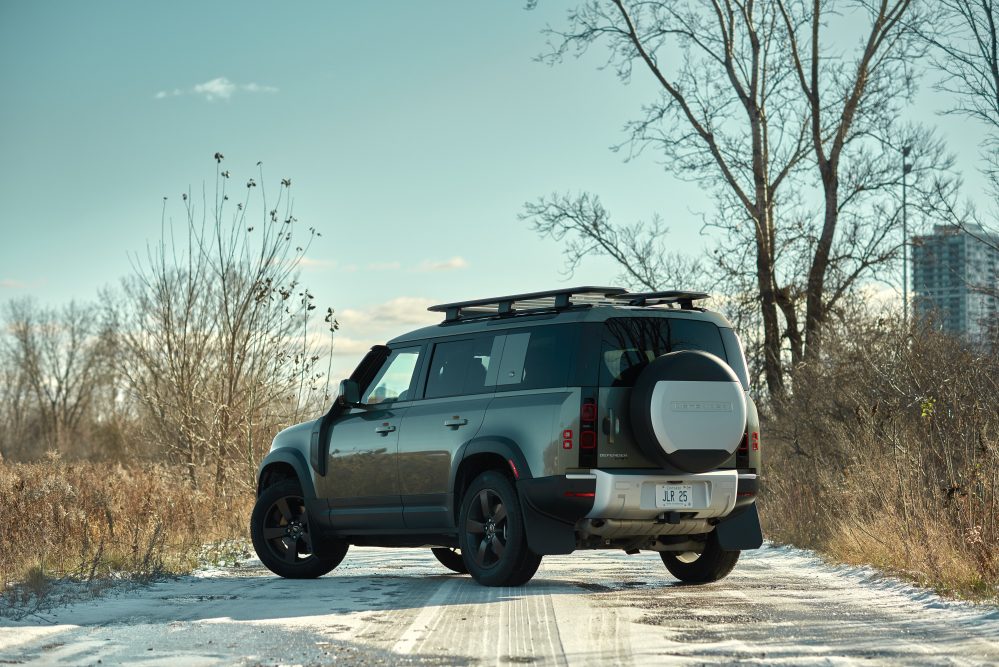 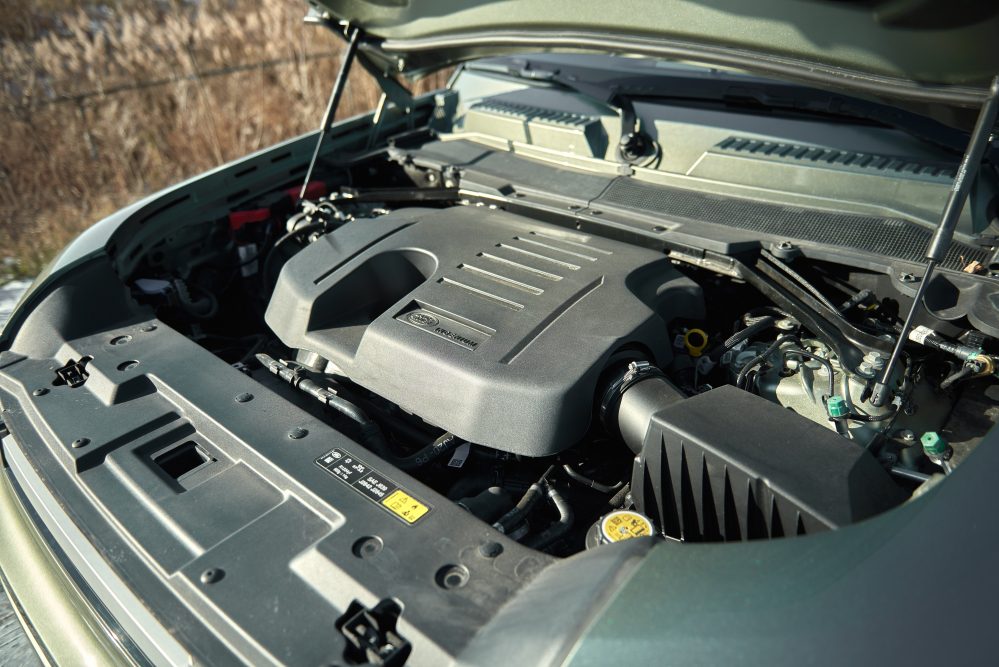 Both engines are paired to an eight-speed automatic gearbox, while four-wheel drive is of course standard. Those packs then unlock a variety of different offroad features that further enhance the Defender’s off-road capability. 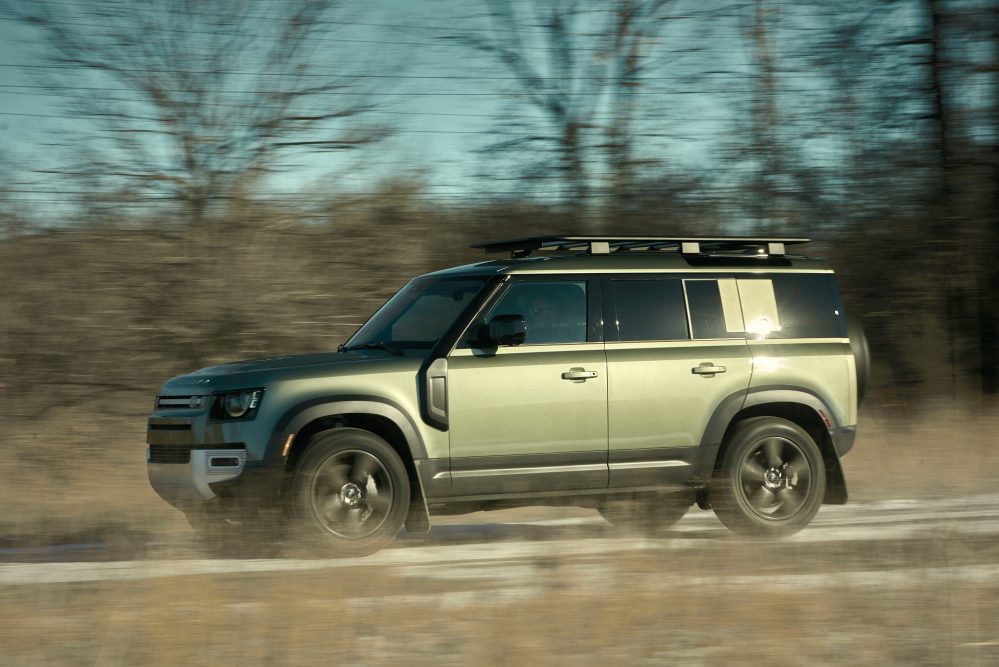 I was expecting the Defender to be good at blazing trails, but I wasn’t expecting it to be this athletic on the road. I mean, sure, it isn’t as quick as a Jeep Grand Cherokee Trackhawk or as focused as a BMW X3 M. It also feels like a large brick out there in the urban wild. But it’s surprisingly quick off the line and its suspension is tremendously smooth. 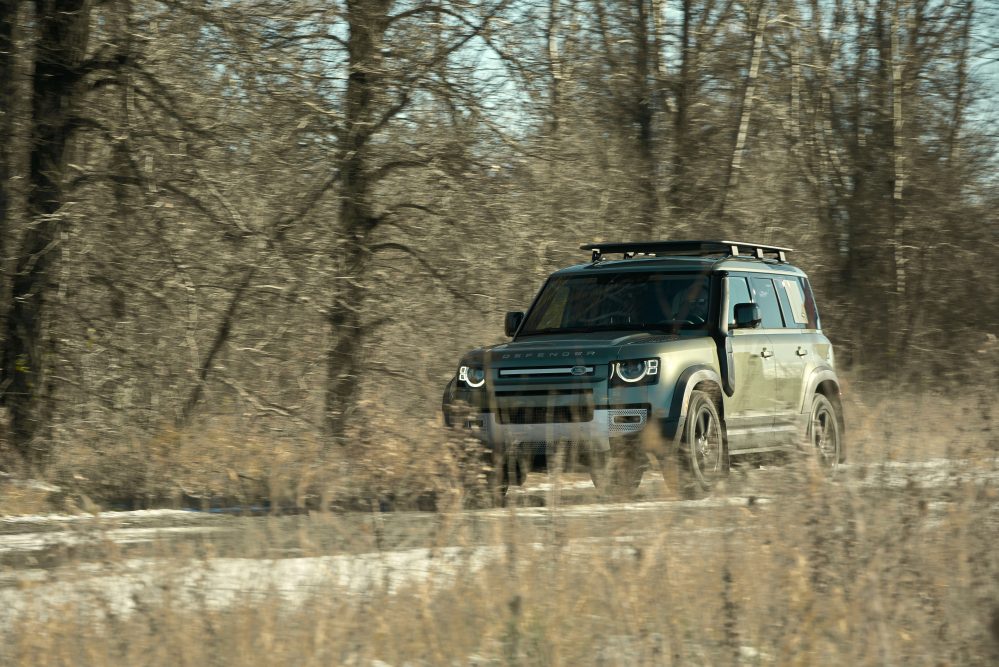 For those wondering, no, this doesn’t ride on a body on frame configuration like a Bronco or a Wrangler, but that’s ok, because it’s precisely why it sets itself apart as a luxury vehicle. On the road, the Defender’s chassis feels rock solid and buttoned down, feeling a lot more civilized than its adventure-seeking body suggests. 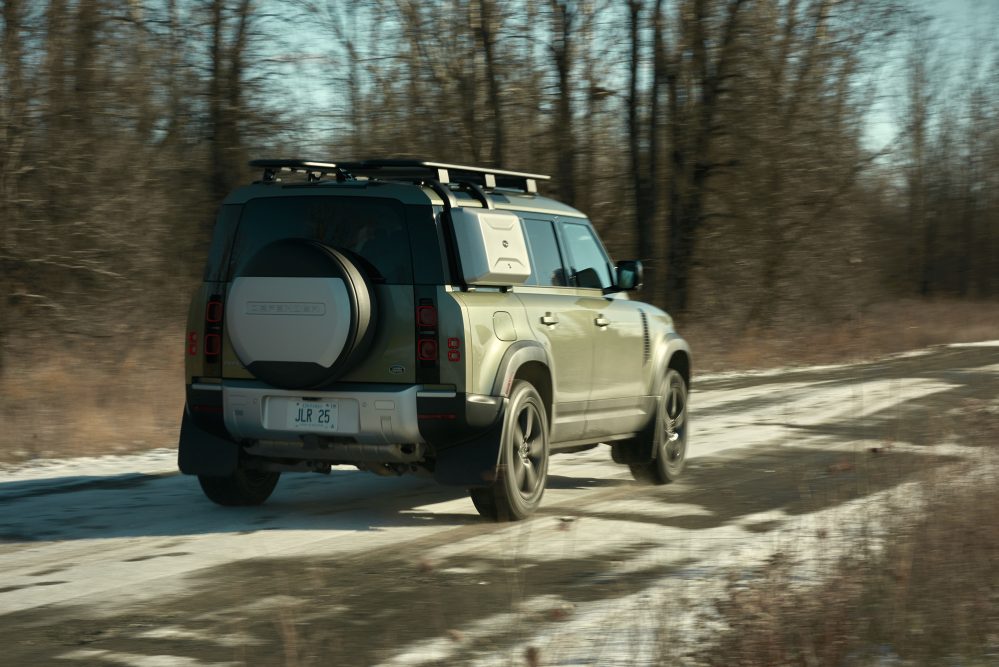 It is a big and heavy truck though, so body roll is high and don’t expect to carve canyons with it, but it’s not the  rudimentary handful offroader I was expecting. As a matter of fact, I got out of a Jeep Gladiator before driving this, and next to the Defender, the Jeep felt like an ox cart. 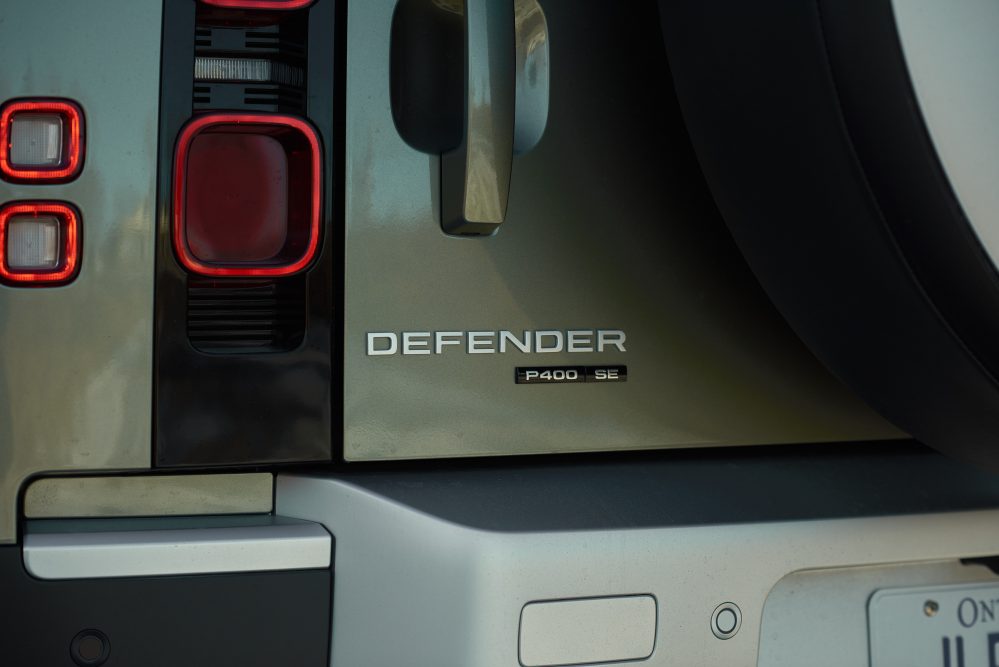 What’s especially impressive is how smooth the Defender remains on a beaten path. Fine, I didn’t do any serious off-roading with my tester, simply because I didn’t spend enough time with it. I’ll get more seat time with this thing in January where I expect to really get it dirty. But I did throw it hard into a bumpy, snow-covered dirt road and it ate it all up no sweat. In a Defender, off-roading is an easy, non-stressful affair. 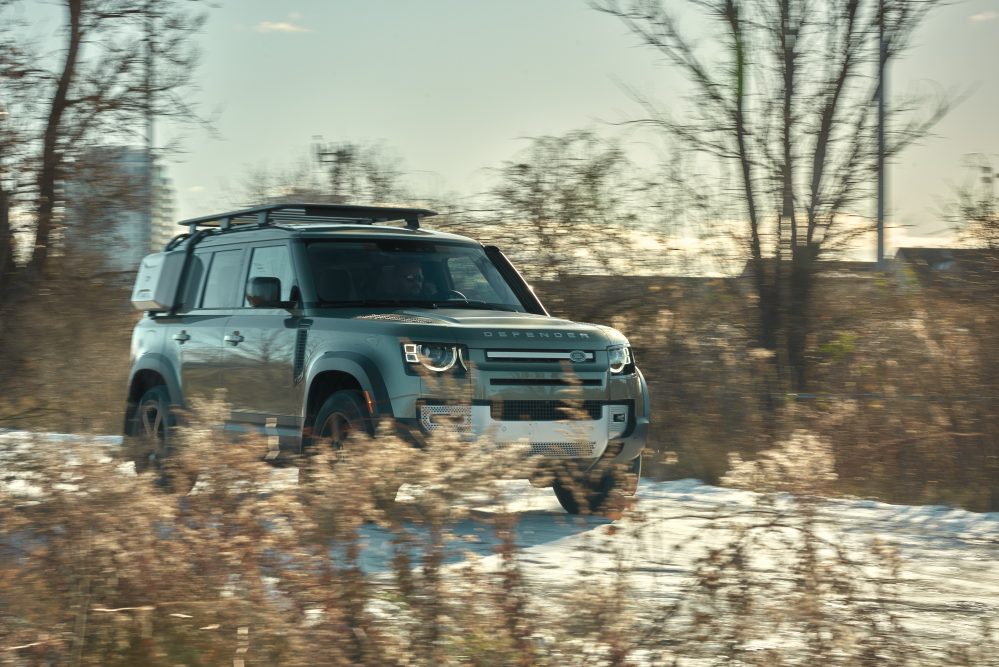 The turbocharged straight is also fantastic, delivering a healthy dose of low-end torque and a strong surge of power once that big turbo spools up. It’s quick too! There are some delays in the transmission, but the hybrid system does a good job of quelling it. What I find really cool is how the engine sounds from the snorkel air intake. Lower your window when flooring it, and you’ll hear all sorts of kickass intake sounds and blow-off chirps. 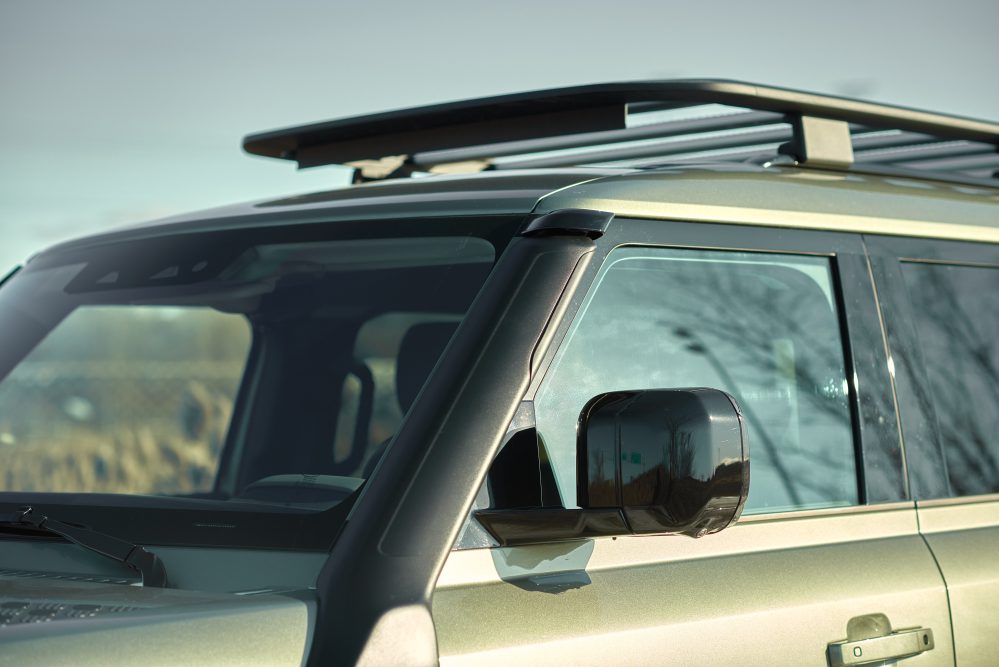 But perhaps where this Defender really kills it is in a cabin that’s just as well thought out as its exterior, both from a design standpoint, but also in downright ergonomics. There’s this utilitarian look and feel to everything, with a great use of materials and color combinations, but also a fantastic exploitation of space. 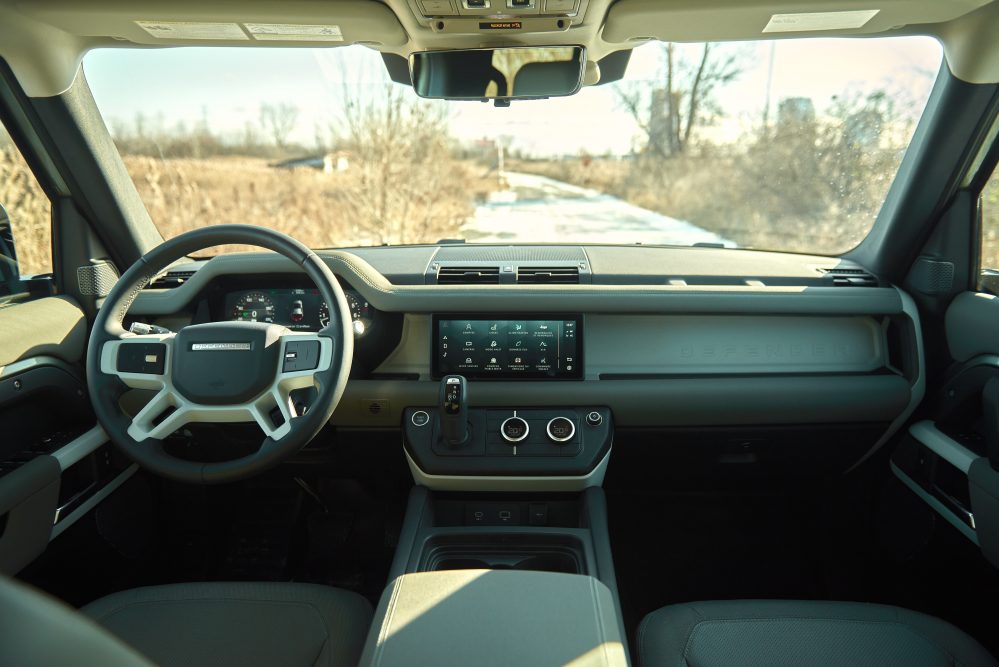 The Defender is a big truck, but it feels even bigger inside where every corner of the cabin offers either a handle to grab onto, or a storage area to throw your gear. You sense that Land Rover understands what adventure-hungry consumers want from their vehicle. More importantly, you can tell Land Rover has actually taken this thing out in the wild and tailored it accordingly. 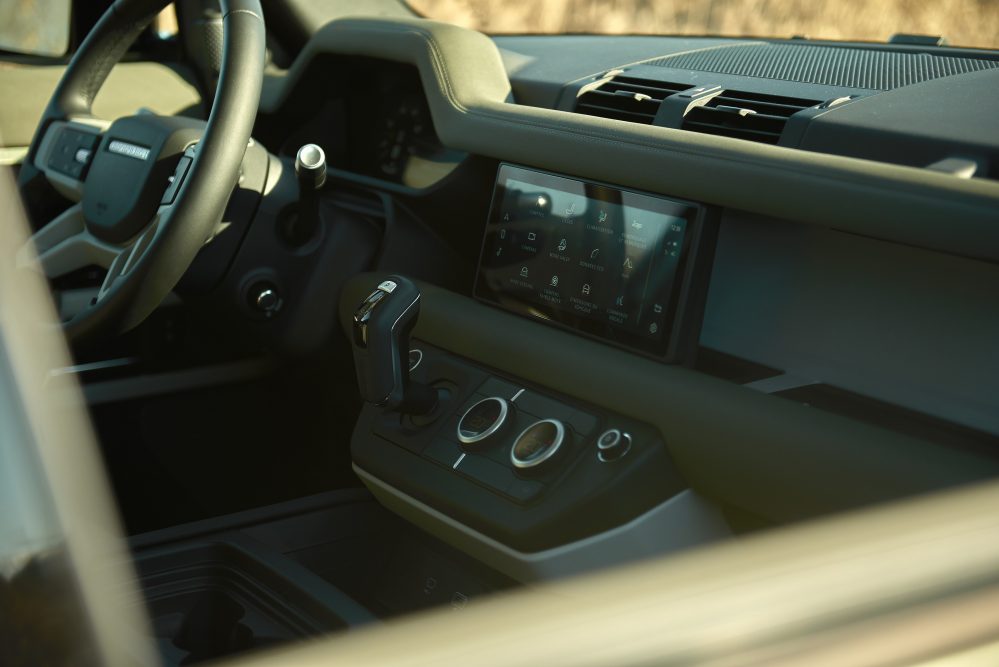 Perhaps what shines through the most about the Defender’s cabin is how well it blends ruggedness with and luxury. It sits on the fence between too posh and too rudimentary, which really allows it to feel special and unique. In other words, you can use it for an weekend date at the spa with your spouse, but also take up into the mountains. 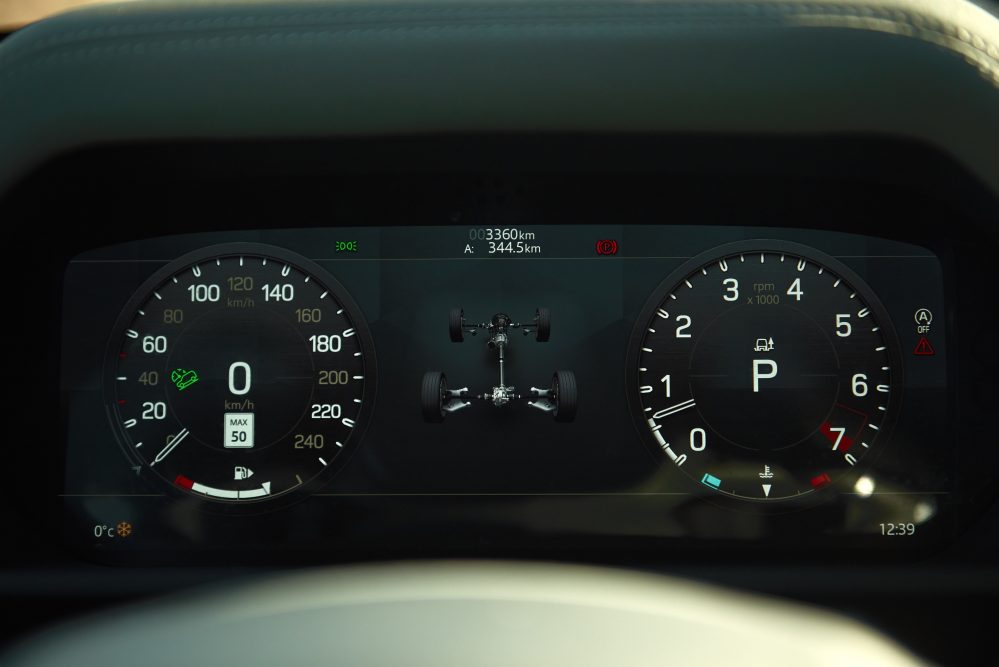 Another decision I particularly like is the fact that Land Rover decided to not go down the full-on digital route with the HVAC controls, but instead wrapped the entire center console with a thick rubberized material and large rotary knobs. It’s perfect for when you’re wearing gloves or splashing the rig around wet lands. 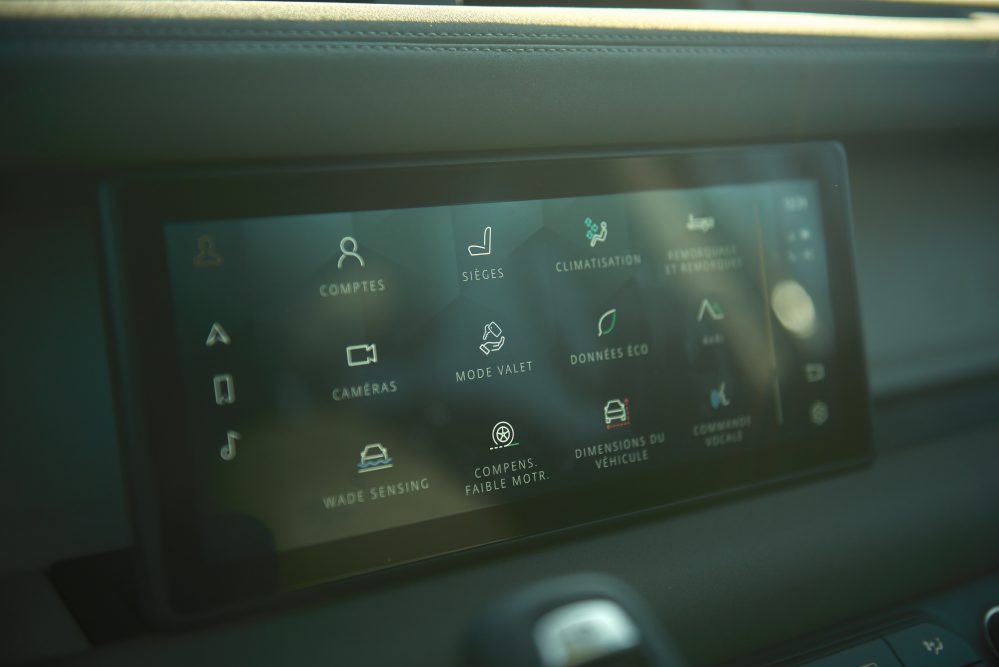 The infotainment interface is rather good too, which is refreshing coming from Jaguar Land Rover. In the Velar, for instance, the system proved slow to respond at times, with lagging commands and difficult to find menus. While the Defender’s software is also loaded with toys that are hard to discover at times, the user experience is never tedious nor slow. It just works. 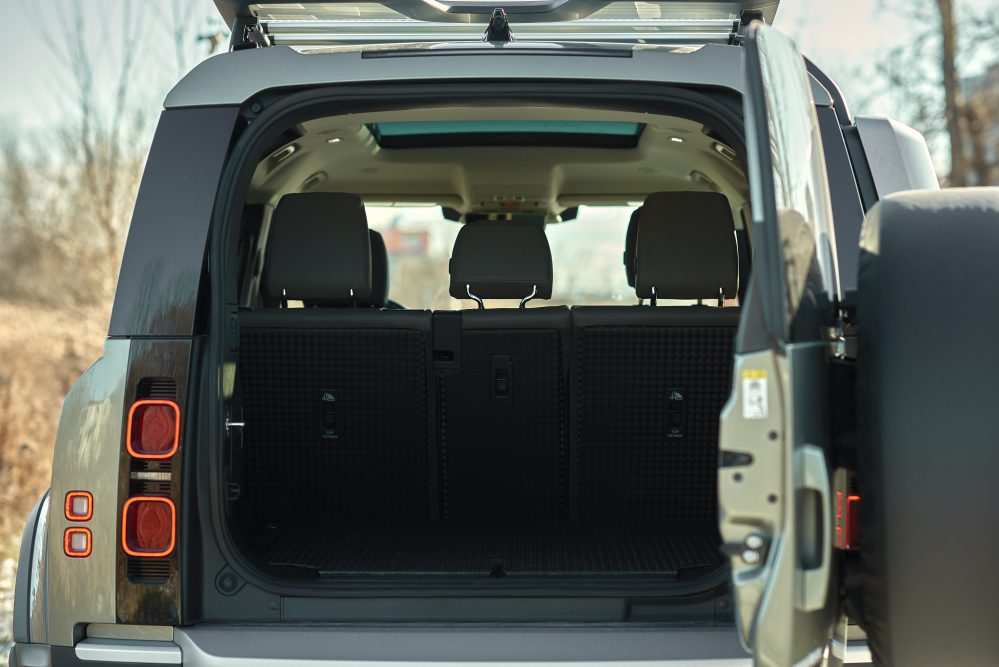 Finally, cargo space is frankly excellent in a Defender. My model did not have the optional third row of seats, which meant the trunk was enormous, giving way to a large, flat rubberized floor, which is ideal for throwing the dog or outdoor equipment. Total cargo space is rated at 2,231 liters with the rear seats folded flat, which puts the Defender between a Mazda CX-9 (2,010 liters) and a Kia Telluride (2,463 liters) in terms of practicality. 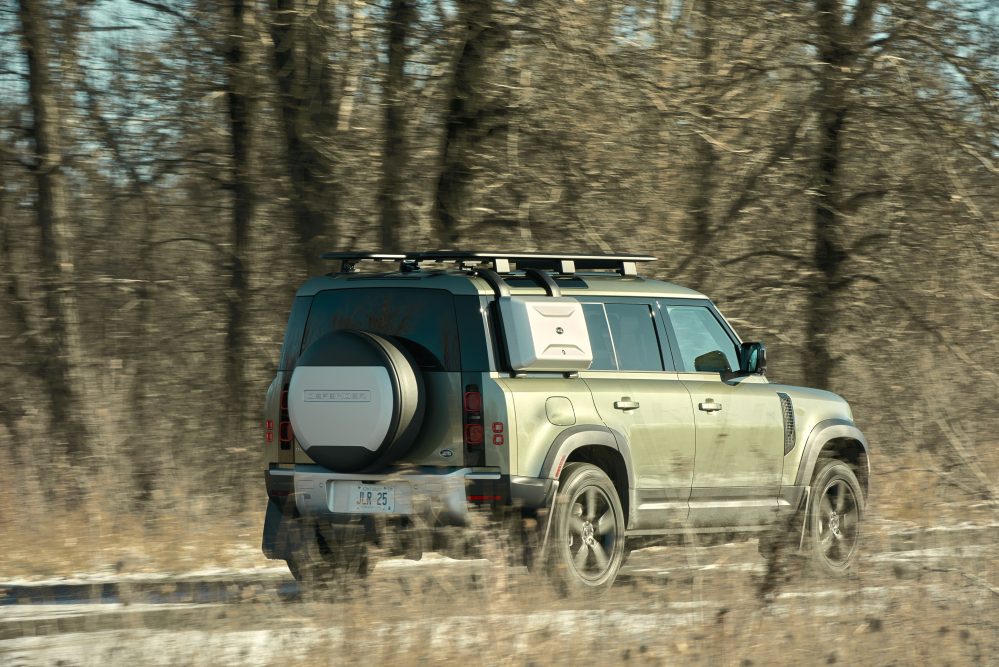 So, yes, the 2021 Land Rover Defender is precisely what we expected given the era in which it was commercialized. Forget the past, this is what a modern Land Rover needs to be. That said, I do need to drive it a little longer to fully appreciate what it’s truly capable of, but my first impressions are solid. Land Rover fully understands its position in the luxury SUV space. and with this Defender, it definitely hasn’t forgotten its past.